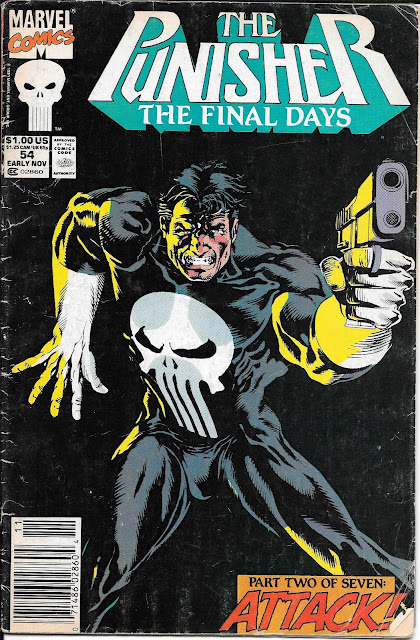 That first season of Daredevil on Netflix was pretty great, wasn't it? Sadly they tied in all the major characters from Daredevil's mythos and now we are left with the dregs for season two. 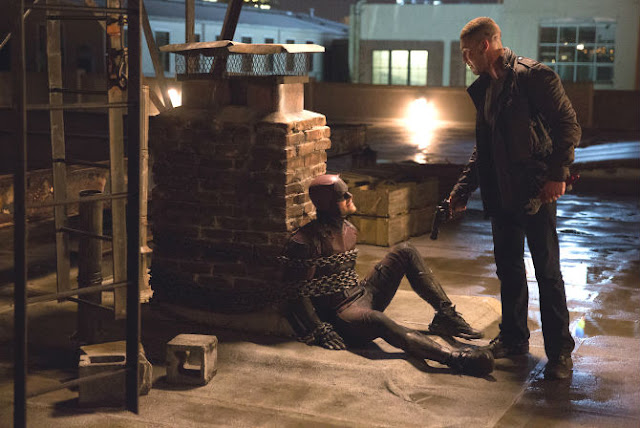 I mean how can the Punisher and Elektra hold a candle to the Night Nurse? 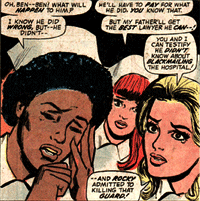 Seriously though, the Punisher was one of horn-heads best foils, with his lack of compunction for killing criminals standing in stark contrast to Daredevil's more even-handed approach. In fact the dynamic between these characters made for astonishingly good reading. And if the show-runners have FINALLY gotten Punisher right, I can't wait to see him get the on-screen introduction that we all know he deserves.

Frank Castle a/k/a The Punisher has been here before. In fact he's made it to The Show multiple times. They've made THREE movies with this character already (1989, 2004 and 2008), each starring three different actors and all of them garnering such poor reviews that I have never bothered to watch any of them. Heck, the 2004 Thomas Jane one is on Netflix at this very moment and I can't be bothered to watch it. Because…meh.

That's sad news because back in the 1980's, I was a big fan. Even though I missed his initial appearances in Amazing Spider-Man and Daredevil, I did pick up his limited and ongoing series. I enjoyed the departure from standard powers-based character stores to a very Dirty Harry-meets-James Bond kind of vigilante tale.

And if re-reading one of these books has shown me anything, it's that the Punisher was nothing but pure escapist macho fantasy. Frank is always two steps ahead of the bad guys. He always escapes, he always triumphs and he always racks up a body count higher than weapons grade Anthrax. Even though this is titled "Final Days" it isn't his swan song. Marvel's tried to kill the Punisher several times in his long history, and not just by killing the character, either.

Those are issues for other times. Right now, let's just revel in this story of "man loses family - man meets heavy ordinance and a need for revenge - man lives happily ever after."

Writer Mike Baron knows his stuff, having written the character since issue number 4. His adept hand has already won two Eisners for writing as well as being nominated at various times for a Kirby and a Harvey. While we are on opposite sides of the political fence, he still seems like a great guy and you should probably be reading his blog HERE instead of wasting time on my drivel.

Art chores go to Hugh Hayes, who would become a veteran Punisher penciller. He has a clean Mark Bright-ish appeal and it fits the material very well. Embellishments are by James "Jimmy" Palmiotti, whose last name sounds Italian. Get what I'm saying here? He's an old hand at this with credits as long as my arm for Marvel, DC and the independents, including extensive inking of his wife Amanda Conner's work who has been everywhere as well. We will get to her stuff about a rough, tough badass when I review Archie comic's The Adventures of Bayou Billy.

But enough about love, on with the vengeance-driven killing spree.

This issue has the Punisher under the thumb of his biggest enemy: Kingpin. Kingpin has Microchip hostage and has cut off one of his fingers. What a jerk. If Frank doesn't do his bidding though, he's liable to just keep right on cutting, carving Microchip into teeny-tiny pieces.

We begin the issue in typical Punisher style, which is to say Frank Castle being an omniscient ubermale who is four steps ahead of everyone. I never realized it when I was reading these back in college, but Frank always had a plan for every contingency. Just like a very lethal Batman. 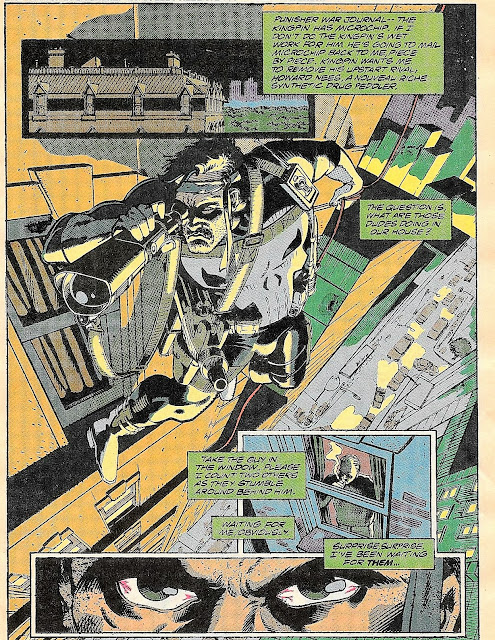 The crazy mob boss Ness, who the kingpin wants rubbed out, has sent guys to the Punisher's apartment to ambush him when he comes home. Frank deploys countermeasure #1,493 and kills all of them by detonating the claymore mines that line the walls of his apartment. And if you are concerned that blowing up a penthouse might accidentally hurt an innocent, Frank has thought of that too.

But first, let's meet our bad guys. It's here where Baron's writing is so important. We can't show the bad guys have any chance of redemption. They have to be beyond saving. Once we show that, the audience realizes that like mad dogs they just have to be put down. But Baron also knows we have to show this, not tell it and that he needs to do it with an economy of words. Let me explain what I mean by using the guys that are waiting to kill Frank as an example.

The thugs are already laying dibs on Franks stuff while waiting around to kill him. They don't care about Frank as a human being, thinking of murder as just another job. The last thug's off-hand remark is pretty much the icing on the cake. Within the space of one thin panel we've reduced these three to sub-humans that we wouldn't mind if they ended up in body bags. Good job, Mike. 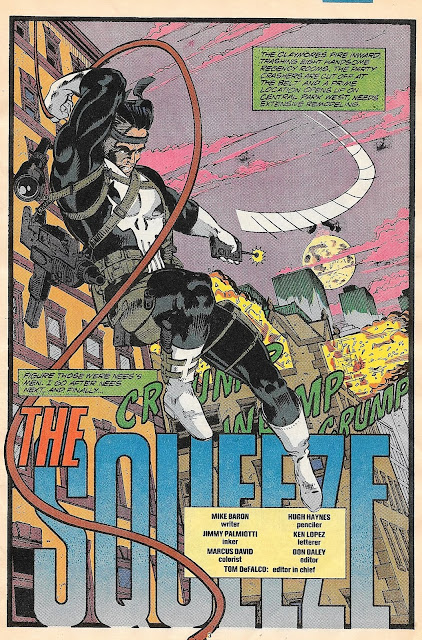 The book moves on to show Micro and the Kingpin playing chess, Micro looking visibly uncomfortable given his lost digit. Baron always had these characters nailed down and here is no exception.

What we get next is a look at the mob boss the Kingpin wants dead, the one sending killers to Frank's apartment. Ness is his name and crazy is his game. Here he is laying the smackdown on an underling…who doesn't take it so well. 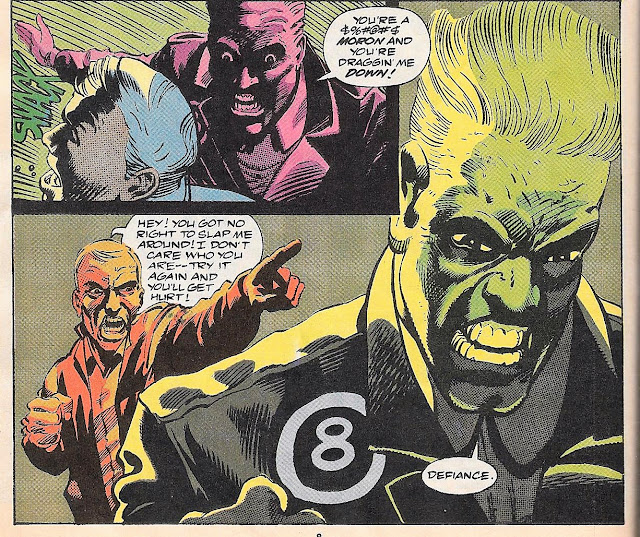 So Ness fires him. 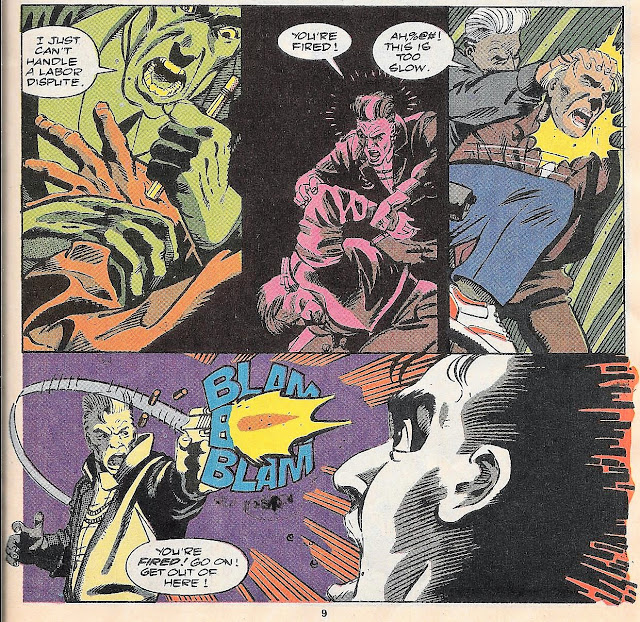 Punisher boss-level bad guys are always like this: Jigsaw caliber crazies who need to be removed from society. It goes beyond not being able to be redeemed to a level of not having value at all, ever. The fact that no one in their right mind would follow a psychopath like this guy is removed from the story and never addressed. He murders his own men on a stray whim in violent and dehumanizing fashions. And then lies about it to the people standing around him at the time.

So our bad guys are mental cases or cold, calculating killers like Kingpin who treat this like a business. And speaking of business, Ness is going after the Kingpin's trucking company tonight. But the real special guest tonight will be the Punisher riding in his brand! New! CAR! 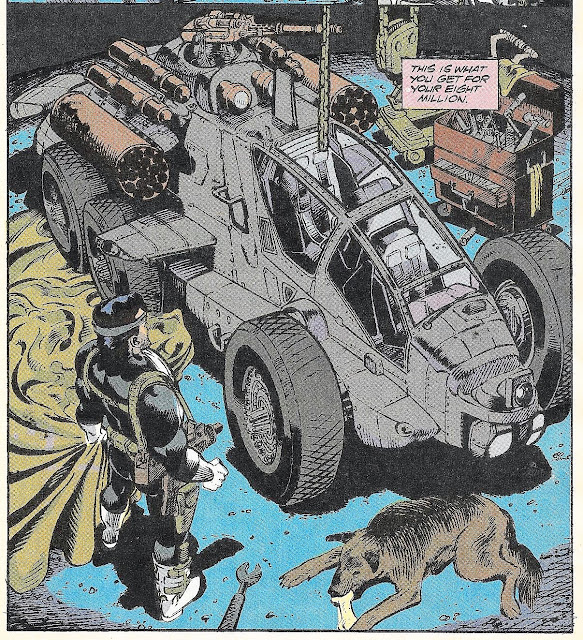 Eight million dollars buys you an armored dune buggy with a few machine guns and cannons on it. The little boy inside of me wants to not only see this car drive over Ness and his men, but I want to buy the toy that will be made from it. I want to try out its "Mob Mashing Tires" ™ and use it to inflict life-like battle damage to all my other action figures.

So yah, I'm a bit jazzed for this action sequence. 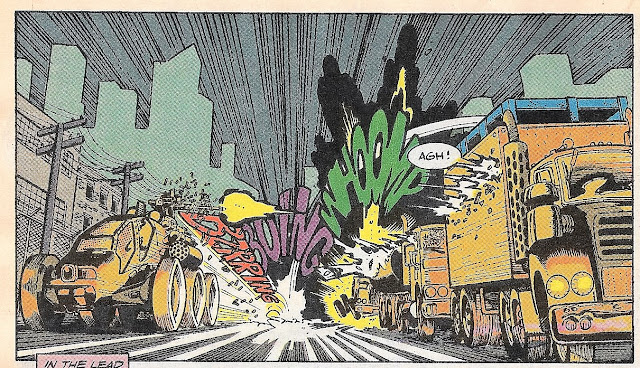 For a while there, my hopes for the road-raging gun battle are fulfilled as Ness and his men are ambushed by the Punisher-tank. I'm in full on Mad Max-Road Warrior mode. Everything is getting "blowed-up real good" until Ness takes out this little bazooka…. 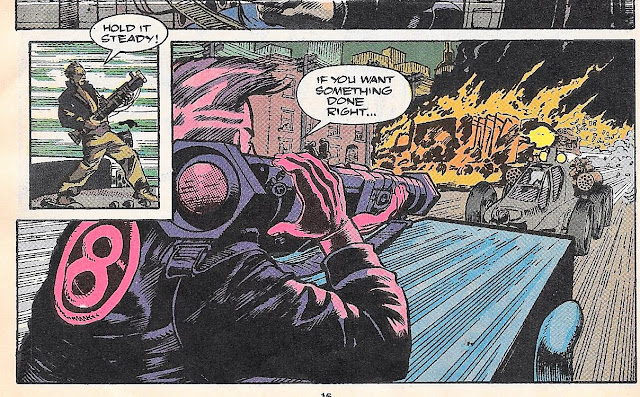 …and turns eight million dollars worth of lead-pumping roadster into so much junk metal. Punisher gets away without a scratch, naturally. He even violently guns down more thugs as he gently floats down to Earth. 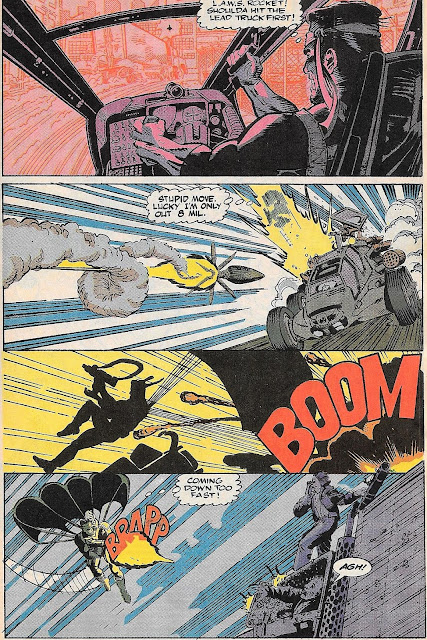 Then we get into some back and forth with Ness. Including this brief tough-guy exchange of words and bullets. 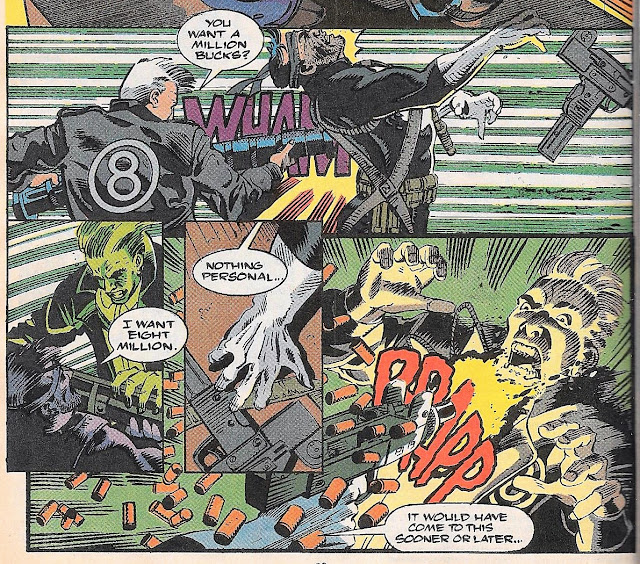 So that ends the threat Ness poses, but not the threats posed to Frank as he finds himself tossed off the roof of a crashing semi-trailer… 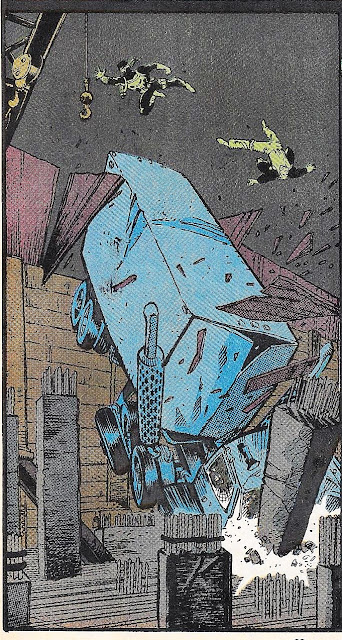 …and then hunted, by cops. How many cops? As a young John Conner from T2 might have said it …"All of them." 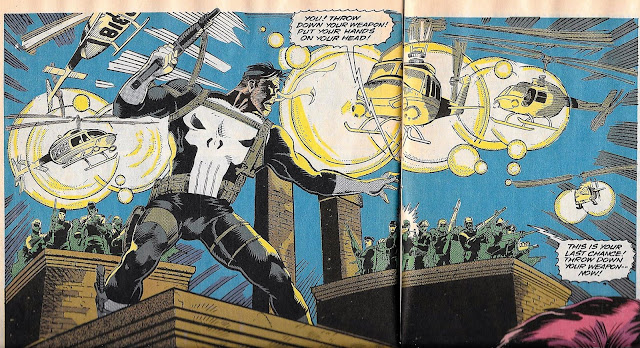 He has the choice to get away but it would result in police causalities. 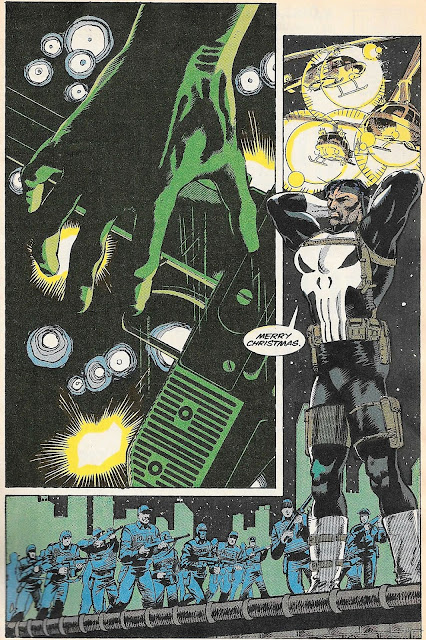 So Frank gets to go to jail again for like the 30th time or something, where we will hear how "I'm not locked in here with them, THEY are locked in here with ME!" Eventually he'll end up murdering a few of the worst apples and escaping somehow, that's a given.

What wasn't a given was the ending of this seven part event: Frank was hurt pretty badly and needed surgery. How he emerged from that surgery will surprise you. I'm saving that disclosure for the Ch-Ch-Ch-Ch-Changes part of the Crapbox. If you haven't heard of what happened, far be it from me to spoil the surprise. It was quite the "jump the shark" moment for the series.

(Or if you like having things spoiled, check out my pal Dean's squeeze Emily's article on it over HERE at The Unspoken Decade)
Posted by SonOfCthulhu at 2:54 AM