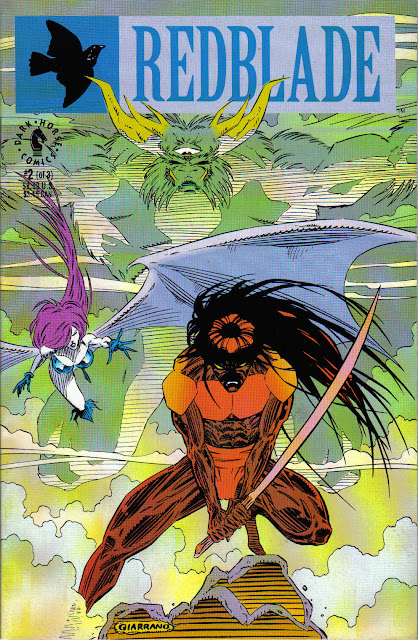 Sadly, someone decided this comic needed an actual plot

When last we left our favorite undead samurai dude and his half-naked witch-devil companion, they had just been transported to Earth. Yet their arrival to kick the butts of various demons was marred by the spell having reversed their sexes. As this issue gets underway, we dispense with that pesky issue by page five. Redblade and Vena are attacked by a demon (of course) and Vena magics them back as they were while Redblade pokes his sword through the offending imp’s skull. 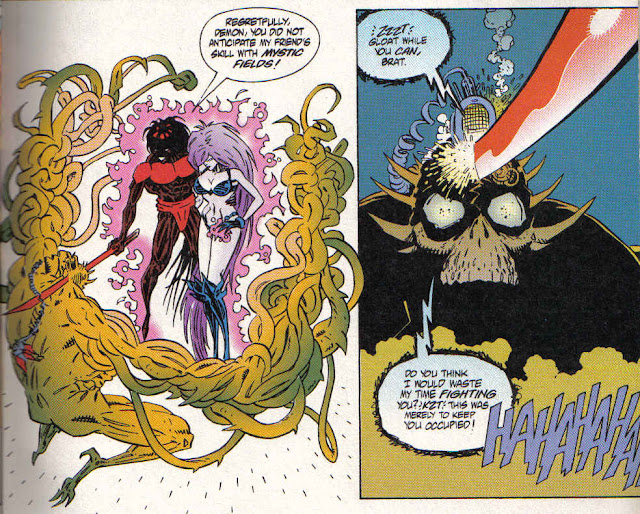 Yay! The sex change thing was a throw-away joke and I’m glad the writer realized it. As Engetsu continues to cut his way through downtown, Redblade decides to take the battle to him.

Soon he’s hacking up demons with abandon, which is fine as long as no one in the audience remembers these were once regular people who have been enslaved by Engetsu. But enough thinking for now. Heyyyyy –Yah! 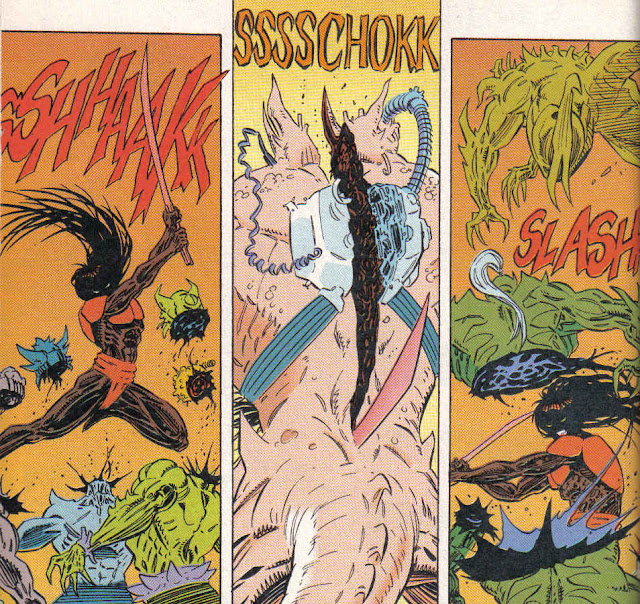 Vena comes down on Redblade for massacring hundreds of demon-people and acting recklessly. Seems they could be sent back to the earth-mother’s realm and would have a hard time returning or something. Redblade lays the verbal smackdown on her. 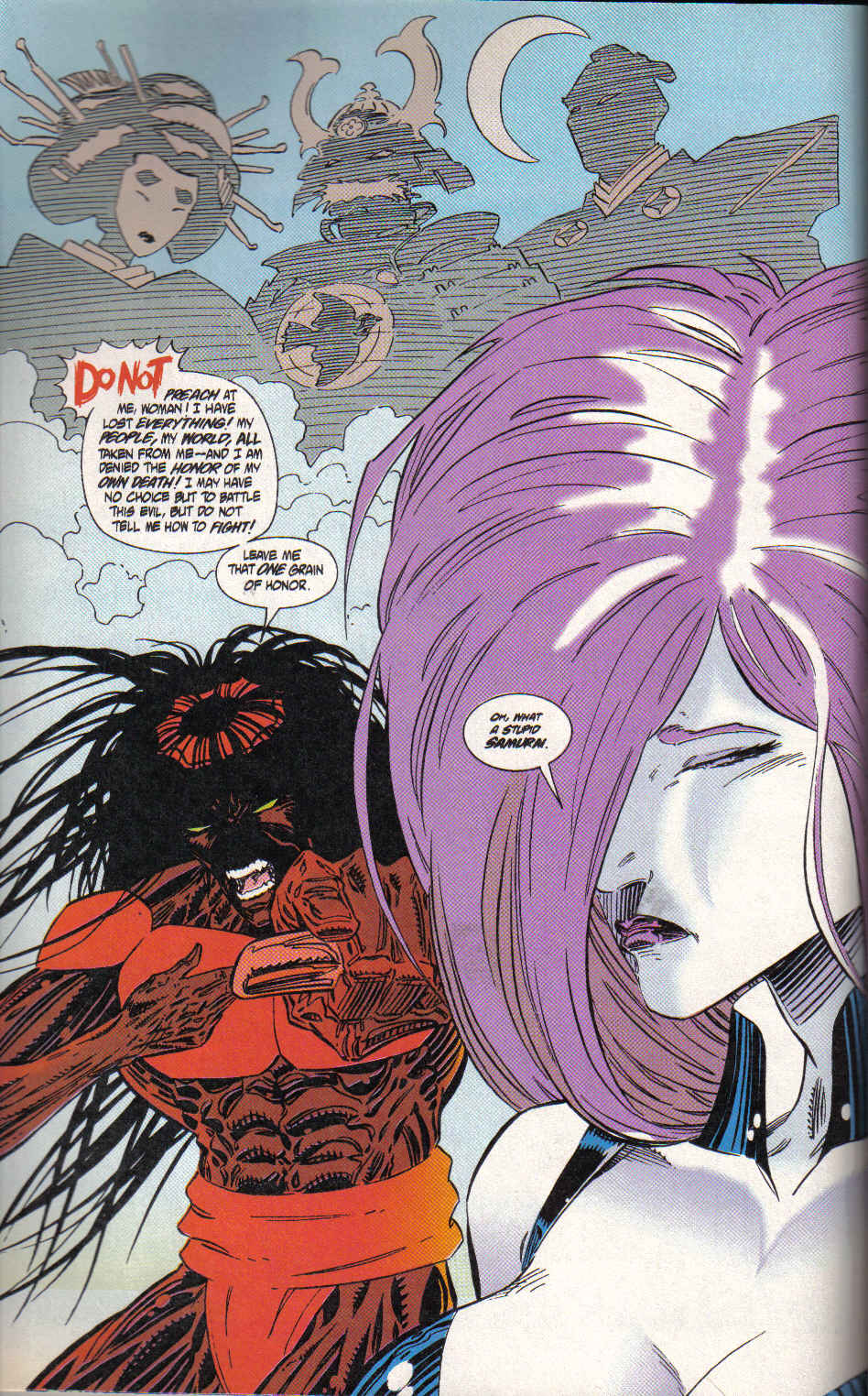 See, it is just like a buddy-cop movie. Meanwhile Engetsu’s monster-maker machine finds the suburbs. He’s just about to start demonizing people one subdivision at a time, when his computer system alerts him to Redblade’s pursuit. He fires off a demon-shaped shell that knocks Vena and our samurai out of the air.

After crashing to Earth, Redblade takes the head off the shell-casing thinking it’s a foe. What it turns out to be is a cyclopean demon inside a hollow demon-shaped rocket shell. Who does Engetsu think he is? Cadbury-Schwepps? This new arrival trashes Redblade and shrugs off the worst blasting by Vena while saying how sorry it is to have to fight them. 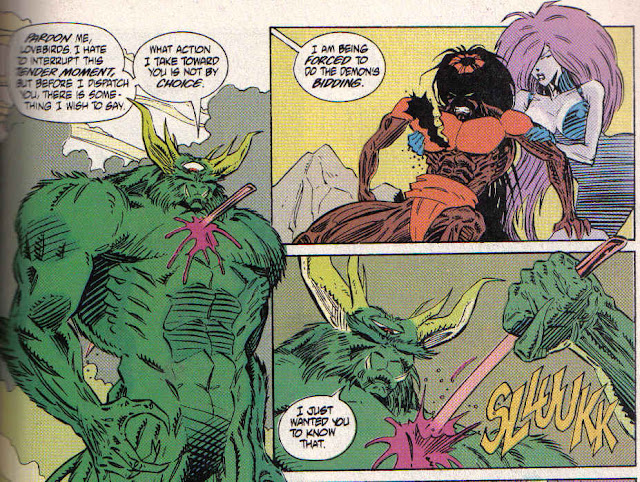 So Vena patches Redblade up in some of the goofiest-looking magical Samurai armor I’ve ever seen and sends him back into the fray. He still gets a shellacking from mean-cyclops green. I’m not sure how it happened as any demon facing off against this outfit would surely die laughing. 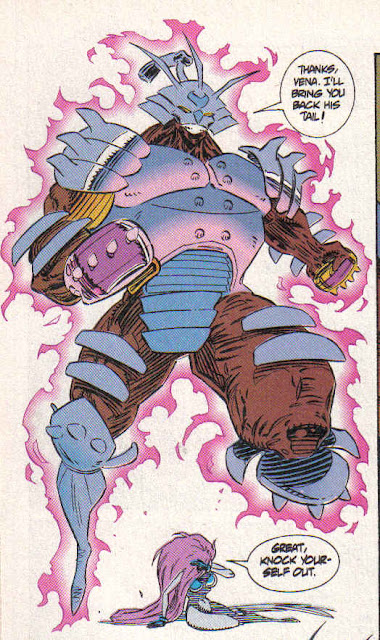 Vena tries to take out the baddie and she gets knocked out. All the while, he’s complaining how he really doesn’t want to do it, but Engetsu is holding his daughter’s spirit hostage. Engetsu starts sucking people up with his giant demon processor, which leads to my only giggle of the whole mag. 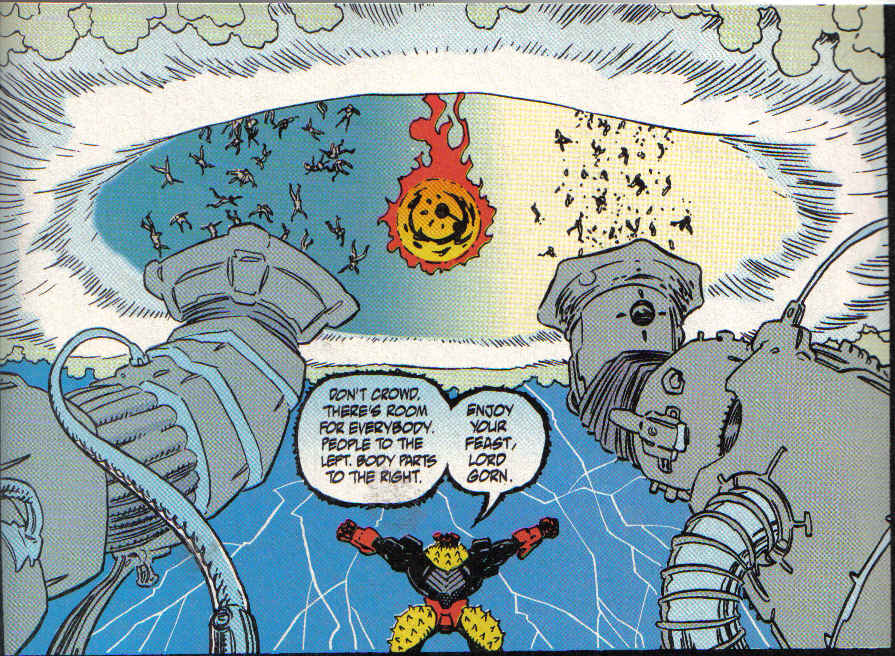 I was hoping for a little resolution this issue, but nada is forthcoming. My assessment is that the additional good demon/bad demon subplot weighs this issue down. To recap: Redblade and Vena captured by a demon that acts like all reluctant and good guy-ish. He will likely turn on his master next issue. Engetsu murders thousands more people with no one coming close to stopping him. The Gorn (remember him?) makes an appearance this issue and it amounts to him gloating behind the scenes while rubbing his hands together. Kind of meh-tastic compared to the first issue.

But still a bunch of fun.

Posted by SonOfCthulhu at 5:44 PM