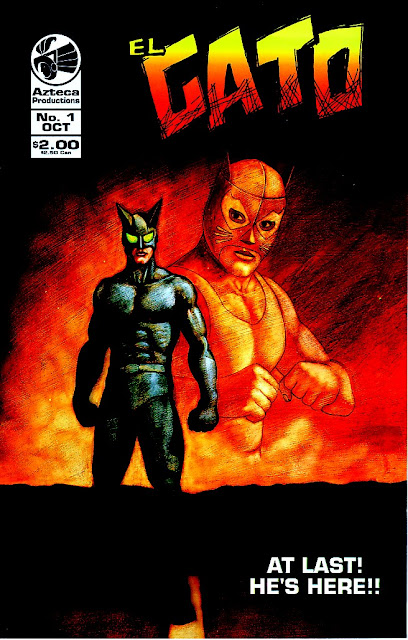 Azteca Productions came out with El Gato Negro in 1993. A labor of love from fellow Dallasite Richard Dominguez, the book followed the adventures of one of the first Hispanic comic book superheroes. The book met with critical success, but was forced to halt publication after four issues. After a seven year hiatus, El Gato Negro reappeared. All the resources I have show only one issue in existence of what was suppose to be a four part miniseries in 2005. After that I show him popping up in several guest appearances in the "War of the Independents." Guess this cat only had three lives?

Or maybe not? Mr Dominguez had mentioned a possible movie in the works starring the character, even commenting that he finished a treatment of the screenplay recently.

Note that in the above paragraph I stated that the book was produced in Dallas. That means that there is a good chance of me bumping into Richard Dominguez at some point in the near future. Richard was the creator, writer, artist, inker and letter on the first run of EGN, giving up only editorial duties to his wife Olga. I’ve seen pictures of Richard and even though he’s older than me, he looks like a pretty big guy. Even so I’m going to be completely honest in reviewing EGN #1. Mainly because you wouldn’t respect me if I didn’t. Secondly because, outside of a slight grammatical error or two, El Gato Negro is one of the best books in the crapbox.

El Gato Negro is a superhero tale that takes place in Hidalgo county, near the tip of Texas along the Rio Grande Valley. With a population that approaches almost 90% Hispanic, it only makes sense that any dude wearing tights in the area would be Hispanic as well. We begin our tale with two very bad “eses” who’ve just made a prison break. They are hoofing it across I-281 while being chained together at the ankles. They’ve got plans of meeting a big gang boss named “El Graduado” who will help them hide out from the cops. Which is good, since they shot one while making their escape. Suddenly a voice out of the night stops them in their tracks. 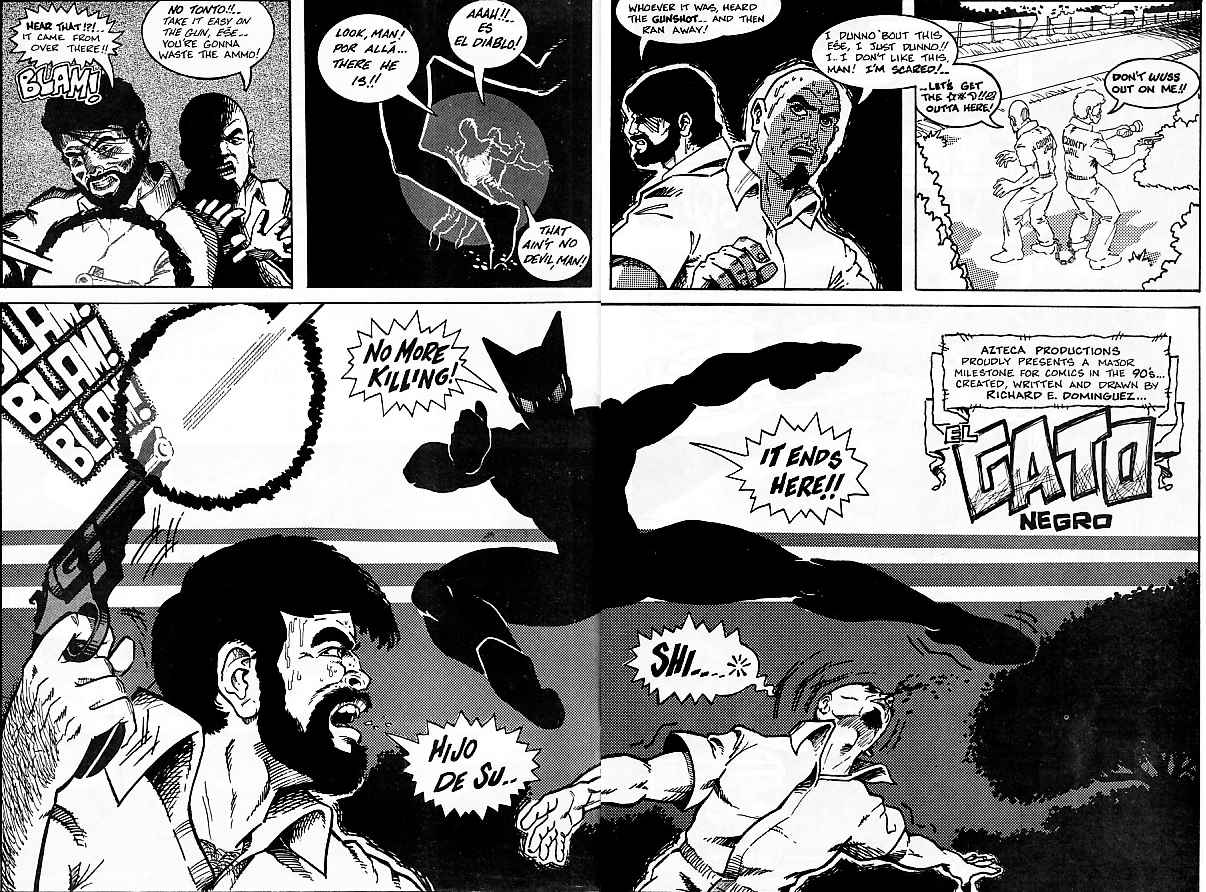 Wow! Richard has an edgy Ron Lim-look about his art without all the shiny surfaces. His figures are clean and he does a marvelous job on facial expressions. I’m in love and we’re only on page three. In addition the storytelling is textbook superheroing 101. It’s like watching the Burton Batman movie beginning with a slightly different twist. Makes for a good intro to the character. Let’s see where this action sequence leads. 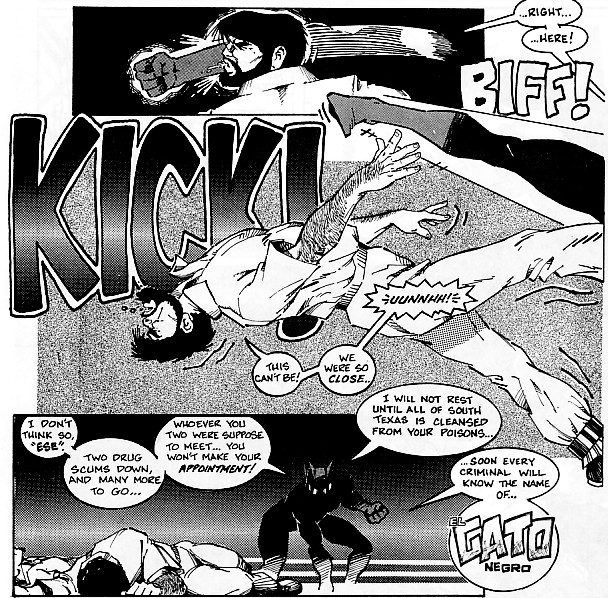 Nicely done. A bit of splashy action sequence then the old monologueing to no one in particular. Can I see a show of hands of how many of you are “in” at this point? No? I need to show you a bit more? Well, ok.

Next we briefly show Officer Miguel Bustamonte of the Texas Rangers. He’s like an unsympathetic Jim Gordon who wants to bust El Gato almost as much as he wants to bust criminals. He settles for the two chain gang escapees this evening while El Gato gets away. All this has the local gang boss very pissed off at his son who is El Graduado and is currently running things. Tell me it’s not wrong to love these panels? 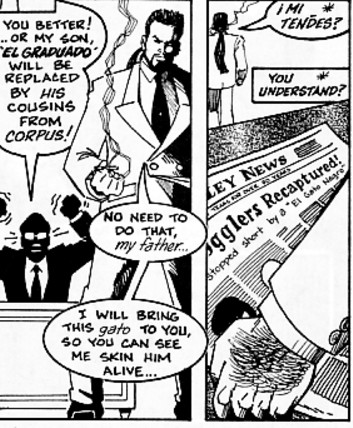 Meanwhile Officer Bustamonte is having breakfast with the local social worker, Francisco “Pancho” Guerrero. Francisco seems to have an unnatural interest in El Gato Negro, something is matched by Bustamonte’s in intensity if not intent. 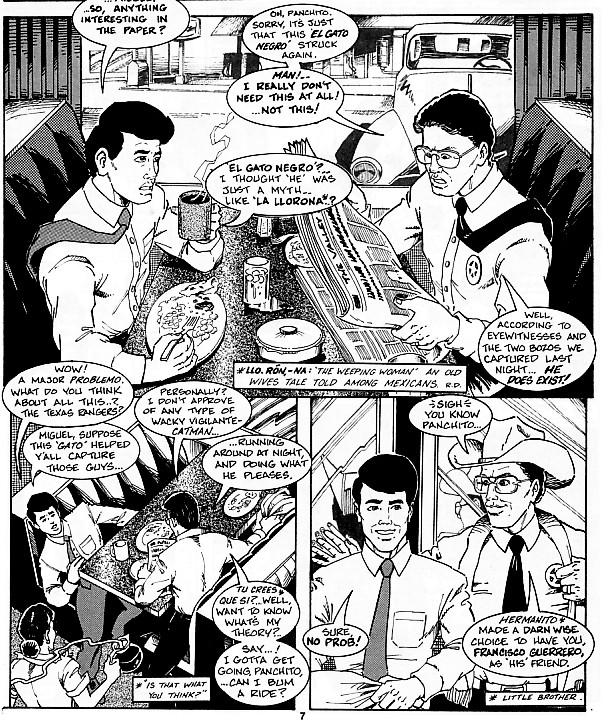 There’s a simple plot built up so far with easy and accessible characters who are shown as realistic people instead of stereotypes. There is tons of dialogue used to flesh out the characters. The art is ultra-clean, clear and stylish without being inaccessible to the casual reader. I counted about three or four minor grammatical errors (usually a missing “a”, “an” or “the”). So WHY ISN’T THIS BOOK STILL AN ONGOING!?!?

How is it that we can suffer through so many bad books from the majors and something like EGN comes along and all of us miss it. Sure Dominguez is well thought of by industry peers, but what I’m asking is why didn’t the reading public embrace his art, story and characters? Why isn't EGN celebrating its 250th issue right now instead of ending at less than a handful? What is wrong with us? I’m only half-way into this book and it just keeps getting better. Like the montage of Francisco showing how selfless he is during his average workday. 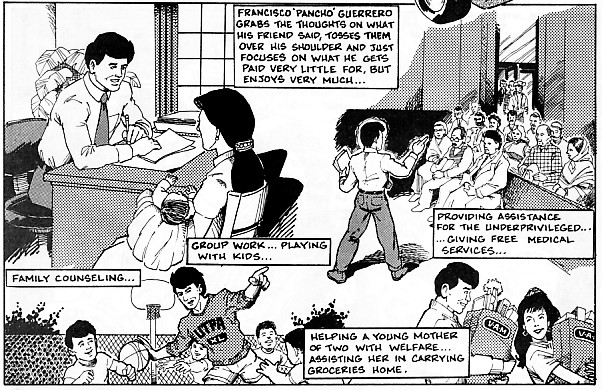 Character building stuff there. And as any comic fan worth his weight in back issues could tell you, this is all building up to the big reveal that Francisco is El Gato Negro. But could that same fanboy have anticipated that the discovery would show that his grandfather is also Francisco’s mentor and was El Gato Negro before him. And that this would be exposed in a series of panels that defy comic book conventions the same way McFarland’s early art did? No? That’s because this book has continued surprises around every corner. 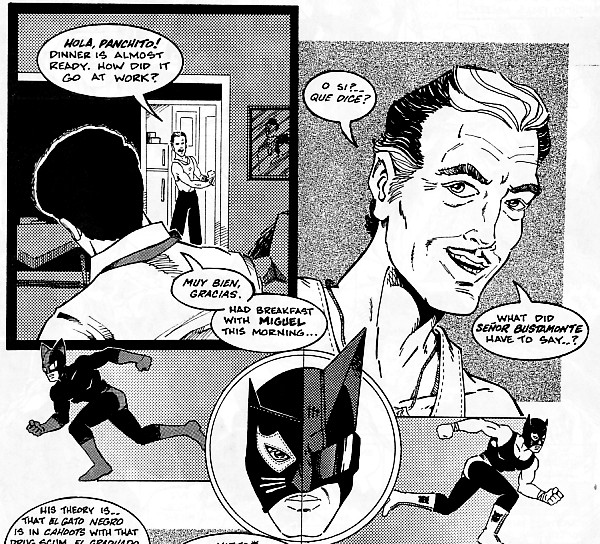 Francisco’s committed to fighting crime. In a dream sequence we see his cop brother Mario get killed by vicious gang thugs. He spurns the advances of a hot mamacita to continue his nightly excursions. He even goes out in spite of newscasts showing renewed pressure from his friend Officer Bustamonte. And his next catwalk nets him a group of “coyotes” who are smuggling in drugs under the cover of bringing in illegals. 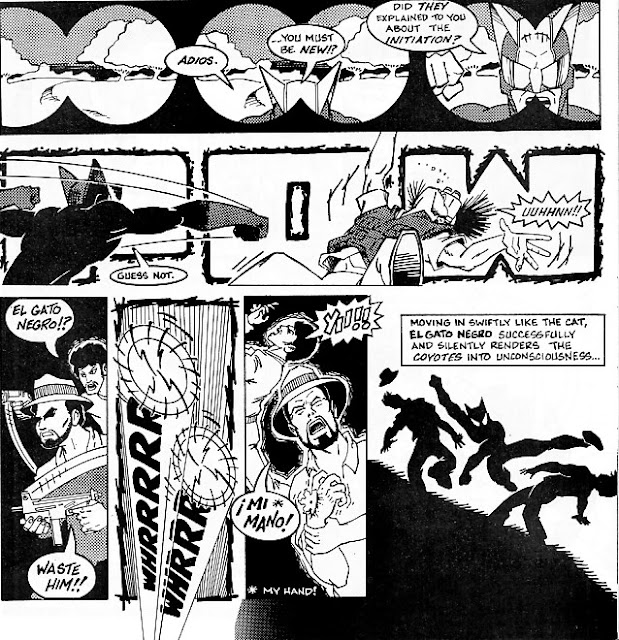 Look at that! It’s like poetry how nicely those panel transitions are handled. Don’t you love that middle sound effect superimposed behind the character battle? And look at the final panel, how easily those silhouettes reflect motion, character and action. I cannot gush enough about Dominguez’s art skills. Skills that go beyond just being pretty pictures but do an exceptional job at telling the story. Anyway, El Gato has a run in with one of the illegals who isn’t quite what he seems just before Officer Bustamonte shows up. 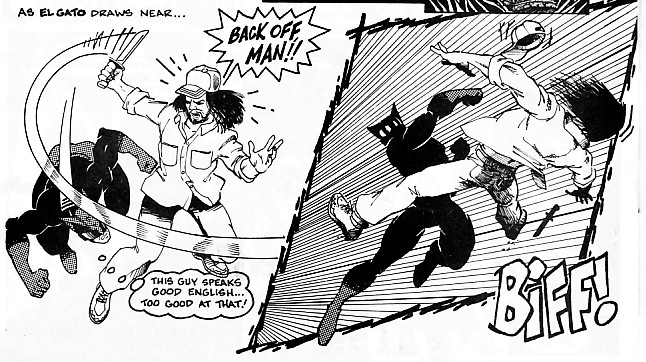 Even the use of speed lines doesn’t detract from the art. Mainly because Dominguez uses the technique sparingly and to good effect in the panels he does add them to. The phony “illegal” gets ventilated by the coyotes who were meeting this group on our side of the boarder and El Gato discovers this faux immigrant was carrying loads of drugs strapped to his chest. Bustamonte shows up before El Gato can do much else except take what could be a potential clue to where this vato came from. 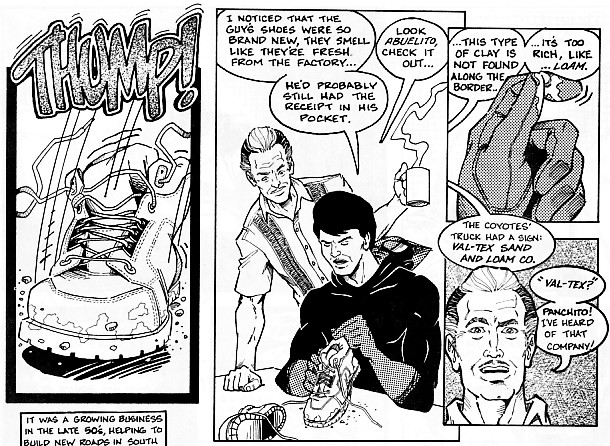 So some keen detective work leads El Gato to Val Tex’s warehouse where he runs into a bit of trouble. 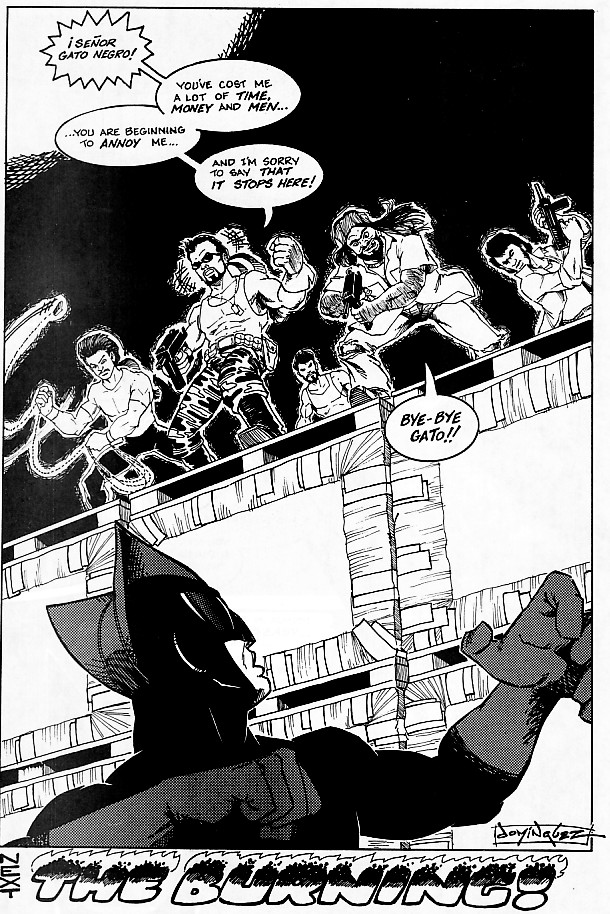 Which is where our issue ends. There’s no ads in this book, which means it had no source of capital other than Azteca Productions and while the cover price was a bit high for 1993, the book’s contents were worth that sticker. If only more of us had picked it up. I mean how could a book that contains things like this gadget page not be worth a few more coins? 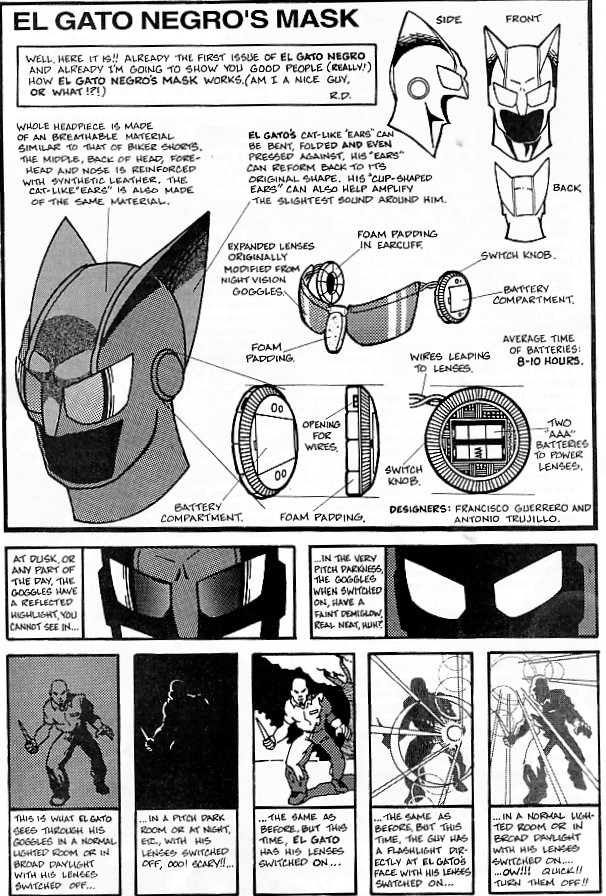 The second series in 2005 did not have Dominguez as penciller or writer, only doing the inking chores. I don’t know if it was B&W like the original or if it was in color. I do know that it didn’t make it either, and for whatever reason that’s a shame. I’m looking forward to seeing Mr. Dominguez at the next convention or whenever. I’d really like to express my gratitude for the series he created, even if it was short and sweet.
Posted by SonOfCthulhu at 8:01 PM