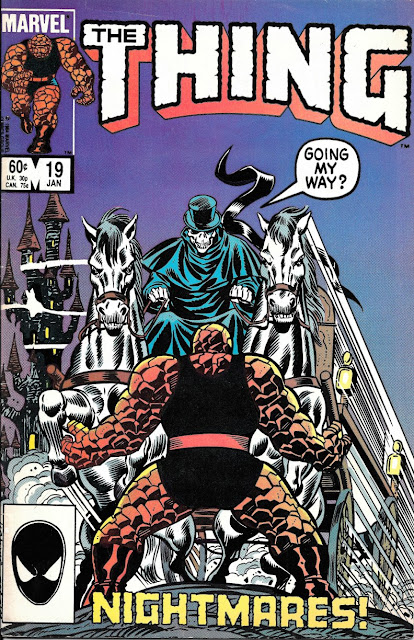 A two-part tale of Clobbering Time for classic monsters

I would love to say that I know the reason why Marvel cancelled the Marvel Two-in-One series in 1983, but I honestly can't tell you. I would consider it having a hugely successful run teaming that ever lovin' blue-eyed Thing from the Fantastic Four with a rotating roster of Marvel's A, B, C and D – listers and the title was always a bunch of fun to read. I can't say I know sales data, but it always had my money when I came across one. Even if the second hero was someone I'd never heard of. In fact I still pull them out of the discount bins all the time.

Maybe it was John Byrne. Byrne was at the time going great gangbusters on his run of the Fantastic Four and he'd done work on the Two-in-One title in the past. I could easily see it being his influence in the series cancellation, specifically because he took over writing chores of the Thing solo book that replaced it.

The first 10 issues were combinations of new material and some flashbacks tales to fill in backstory on Ben Grimm, the man covered in orange rocks. Then something happened to change all that: Marvel's Super Hero Secret Wars. The limited series that touched nearly all of Marvel's titles in subtle ways had a huge impact on the Thing title.

For those of you who remember and all of you that don't, Secret Wars (the first one) was about this god-like being who gathered a majority of Marvel's heroes and villains on a planet he created called Battleworld for the dual purposes of finding out which virtue was stronger: good or evil AND to sell toys. At the end of the day This "Beyonder" got his answer and sent everyone home.

Everyone except the Thing.

Ben Grimm had never been able to turn his power off, ya see, and for the better part of two decades that had made him quite cranky. Reed constantly attempted to cure him but to no avail. But on this Battleworld of the Beyonder's creation, Ben could change back to normal at will.

So when everyone else packed up and left after trouncing the bad guys, Ben decided to stay. She Hulk replaced him for a time with the Fantastic Four and the Human Torch started seeing his girlfriend until…never mind. That's enough info for now.

So with issue 19 of this title we've had Ben wandering Battleworld for 8 issues and things have gotten decidedly strange. Reed said that the world might actually be responding to Ben's unconscious mind in creating the environs around him, which doesn't sound like a place where anyone would WANT to stay, but this is Ben we are talking about. He's wanted to be human for so long, staying sounds entirely plausible.

So in this issue we find him wandering an every changing wilderness…that's just changed into a haunted forest. 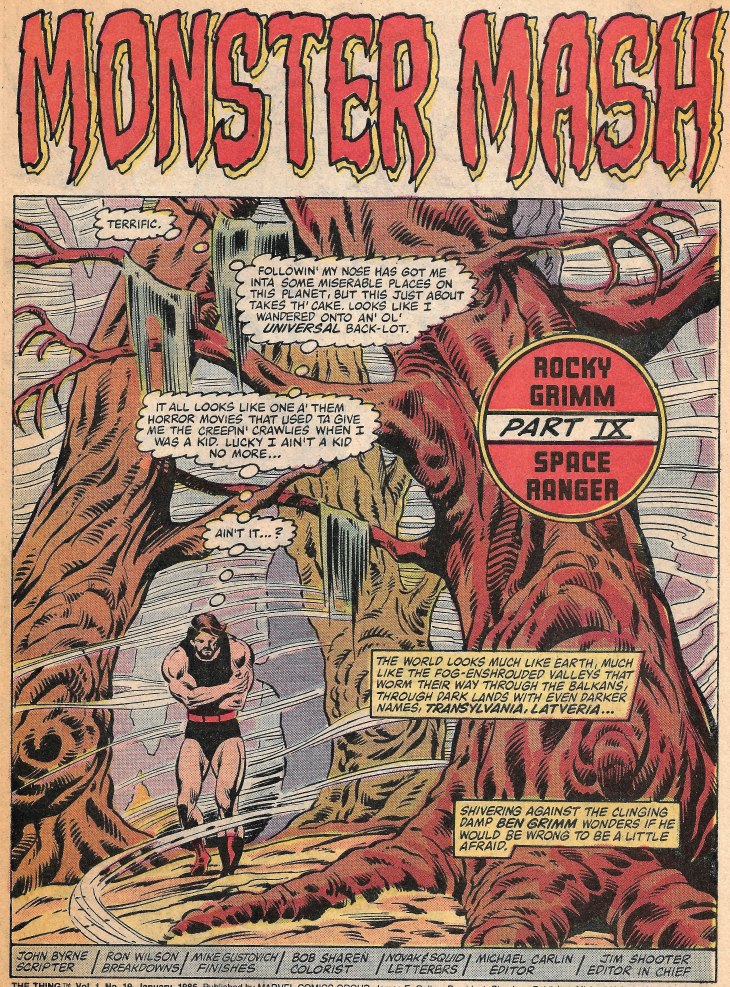 Note we have Byrne on scripting chores and longtime Thing penciller Ron Wilson doing breakdowns for Mike Gustovich to finish. These guys all put in really great 80's stuff so settle in for an enjoyable tale.

This is a story that starts with a near traffic accident. As Ben is musing about his knowledge of how Battleworld appears to function he is almost run down by a carriage. 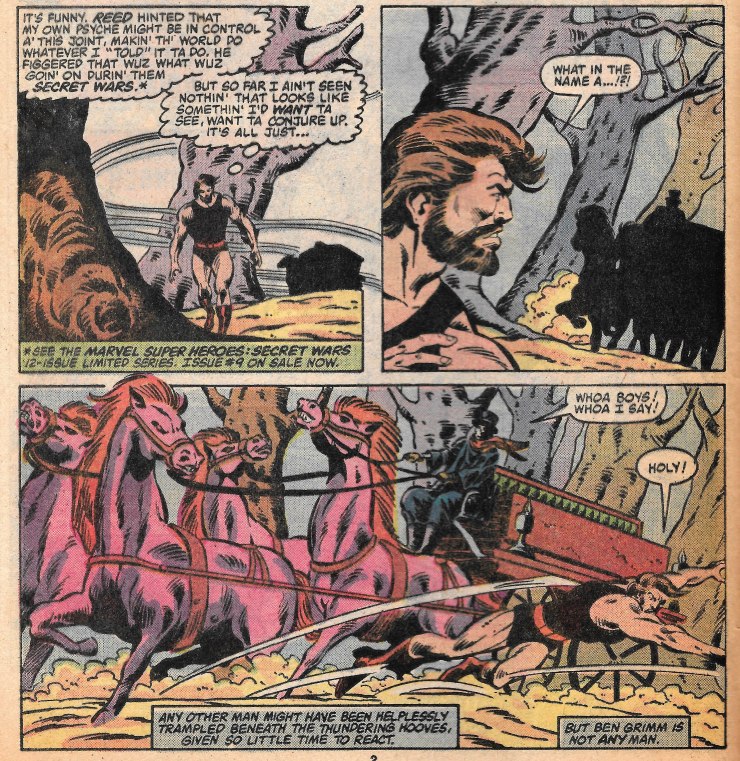 Ben Grimm isn't just any man, as anyone else would have been run down by that team of angry Pinky Pies. Sorry for flying my brony flag fly there just a bit. The carriage driver is very sorry to have almost hit him… 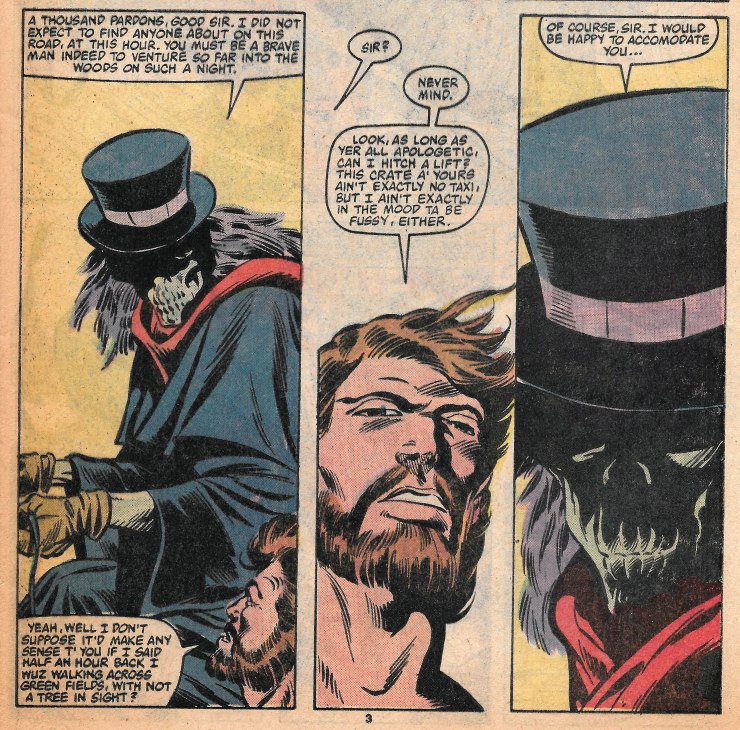 …and after apologizing, even offers him a ride. 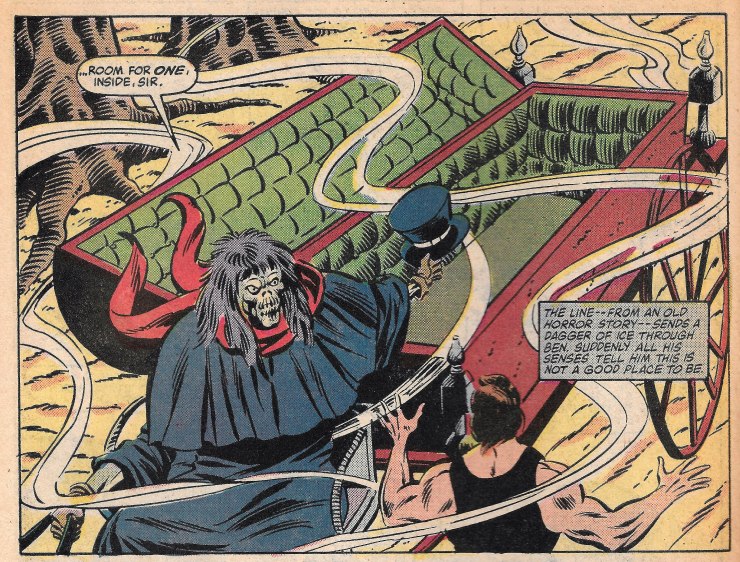 Which is Ben's cue to get the heck outta there. The carriage driver is a bit insistent though and gives chase to be sure Ben gets to see the inside of that coffin. One way or another. 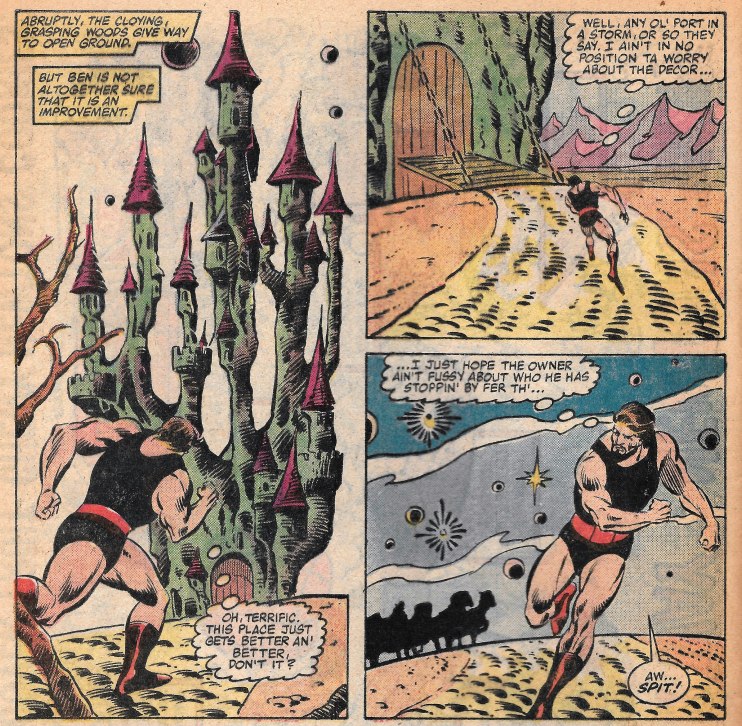 It is interesting here that Ben doesn't just transform into the Thing and take this guy out. I haven't read much of this arc but I don't think his changes were like a werewolf and he could only transform in moonlight or something. I thought Battleworld gave him the power to be the Thing at will. I might have to go back and check again. Whatever the cause, he chooses not to clobber Mr. Creepy's cab service to the underworld.

Instead he's forced to make a leap across a rotted drawbridge that almost tosses him into a deep crevasse.

He's hanging by his fingertips when suddenly… 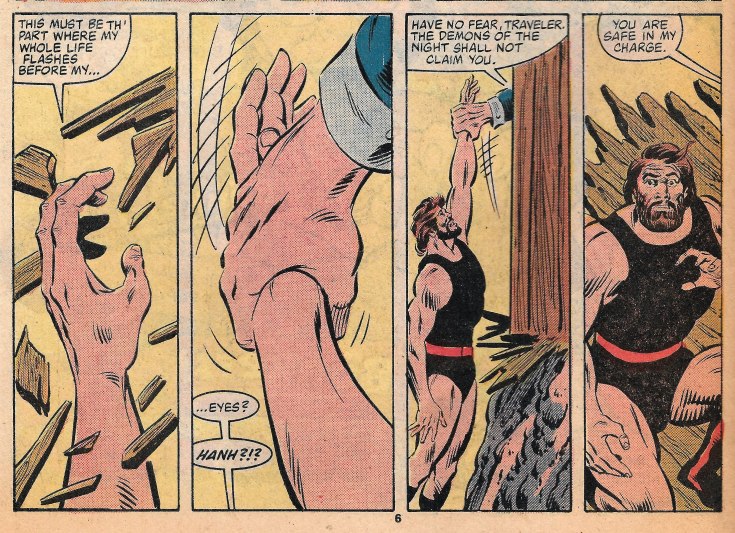 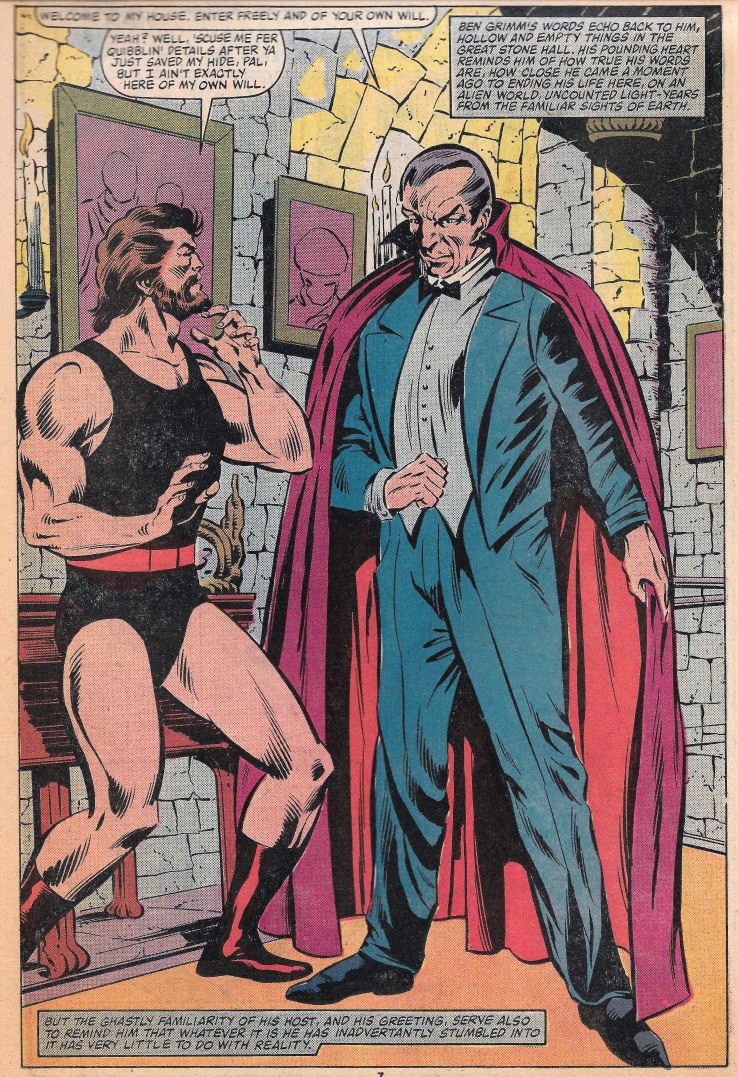 He's screwed. That is definitely Dracula there. Talk about a situation sucking. Ben can't leave even if he wanted to. The Dracula fellow seems a nice sort though and gives up a spare bedroom to him. Possibly in one of those impossible to escape from towers, I'm thinking. 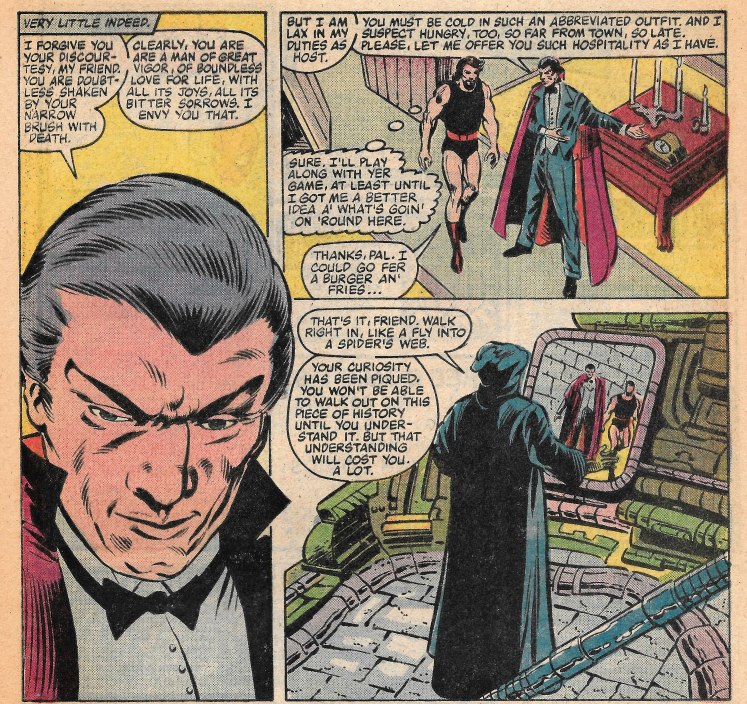 We also get a peek at the mastermind behind some of Ben's encounters on this world over the last eight issues, a being that has taken captive a girl Ben befriended in an earlier Thing issue, and one who claims to know Ben better than himself. Also, a person whose identity we aren't going to find out for at least another issue or two, as Byrne works on building this arc to a conclusion.

In the meantime, Ben is left to contemplate his predicament and decide that now is the time for action. 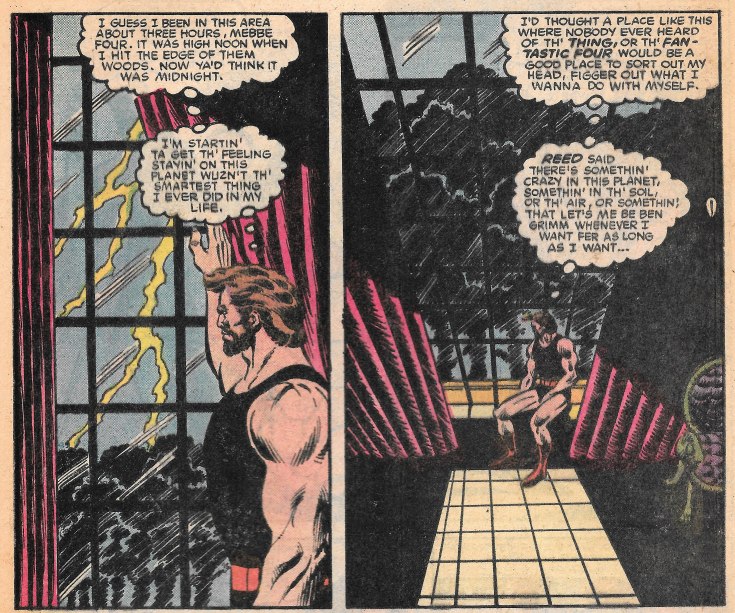 And with that he transforms into the Thing, a fact his new host finds most discourteous. 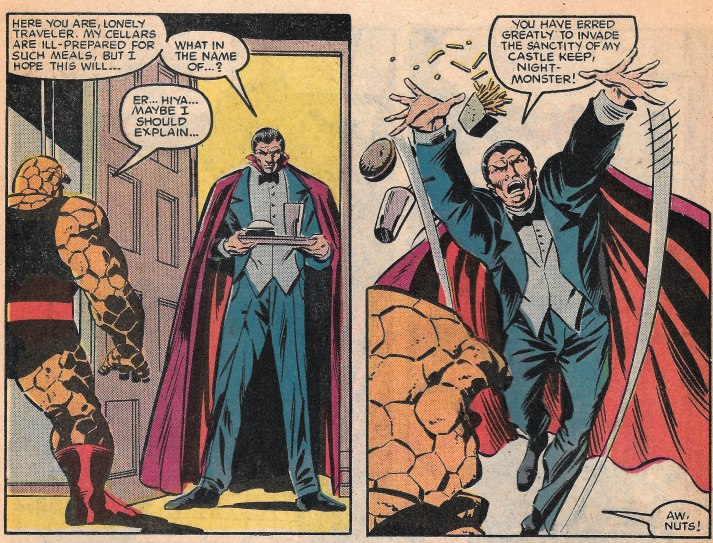 And so we get a battle of Thing vs Vampire, round one – Ding!

Dracula proves that Ben doesn't have a monopoly on transformations and opts for giant, muscled man-bat form. 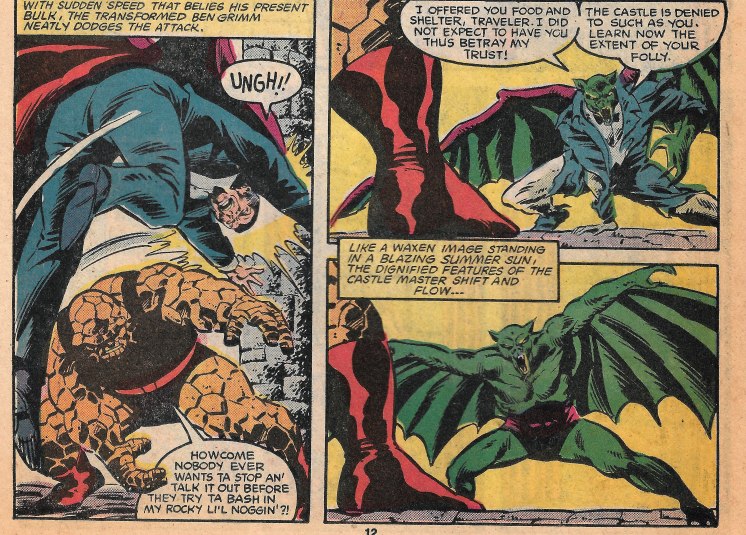 The battle appears to consist of bunch of dodging until Drac lays a claw on Thing's chin. 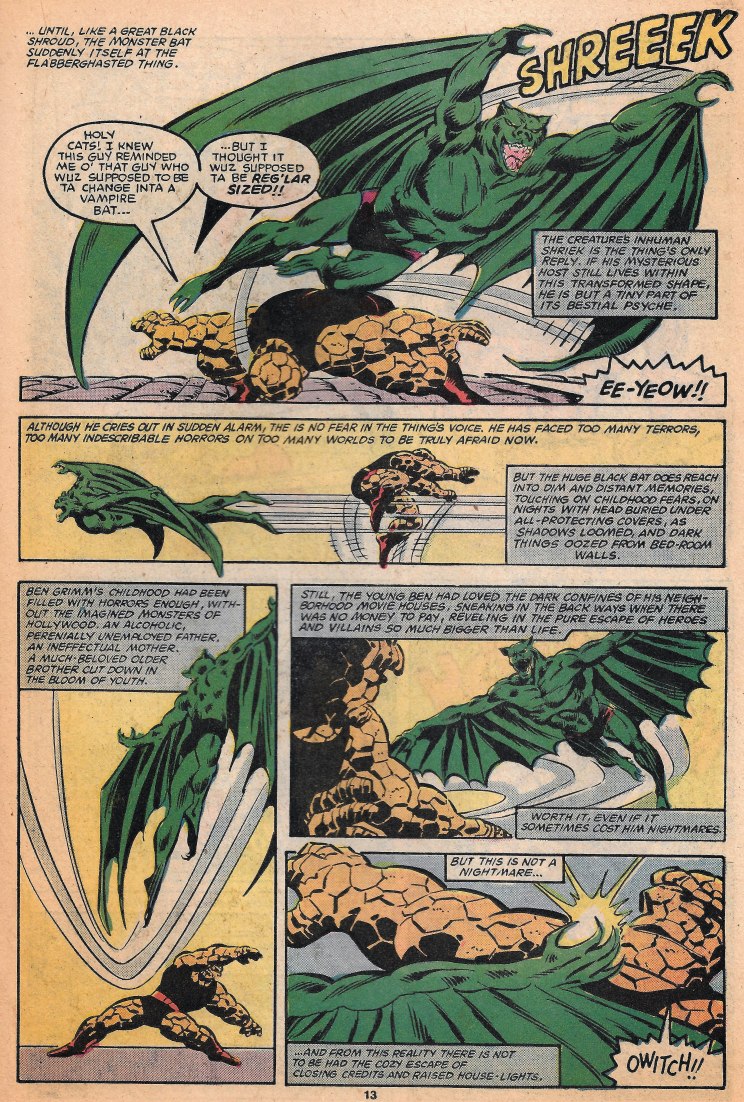 Because that hurts Ben, he decides to hightail it out of there… 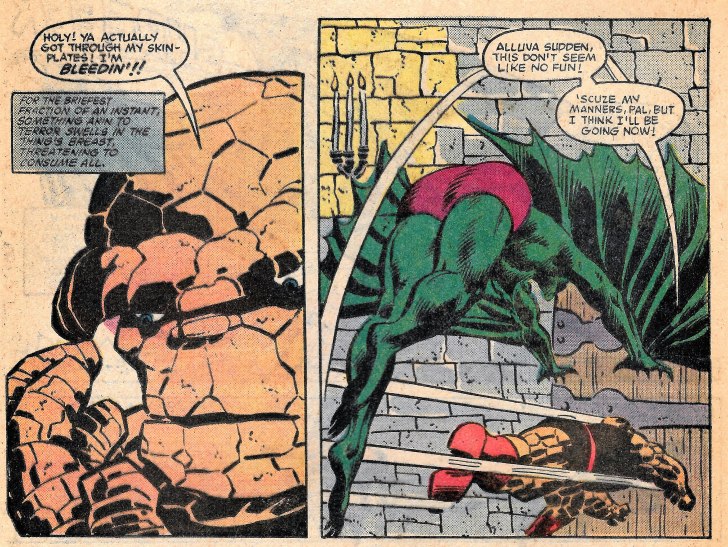 Which would have been great except he was kind of locked away like a princess in a tower, so…one long roll down a flight of stairs later… 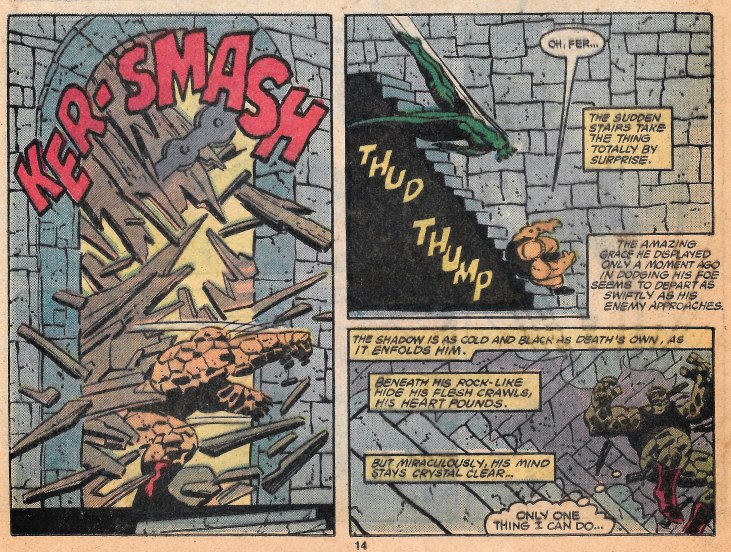 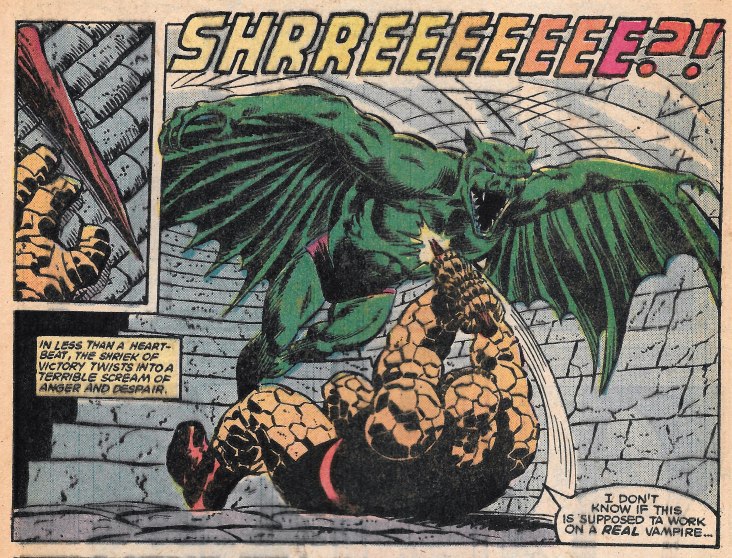 Well that was plenty convenient. And Dracula complies with the rules of being a vampire and promptly turns to dust. Leaving the Thing alone in the only walkway to his room, so of course he's been here before except now it's the Ancient Egypt exhibit from your cities' museum. AND it comes complete with, you guessed it… 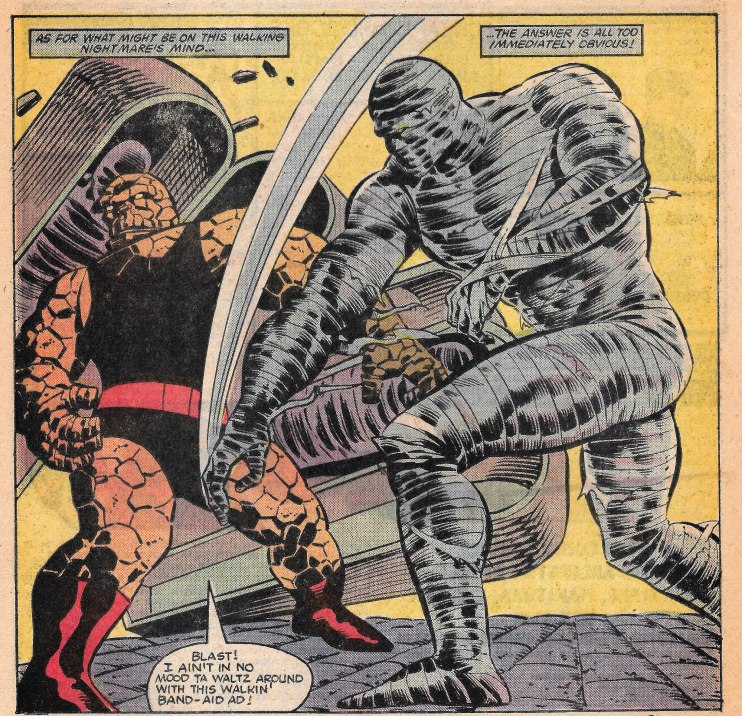 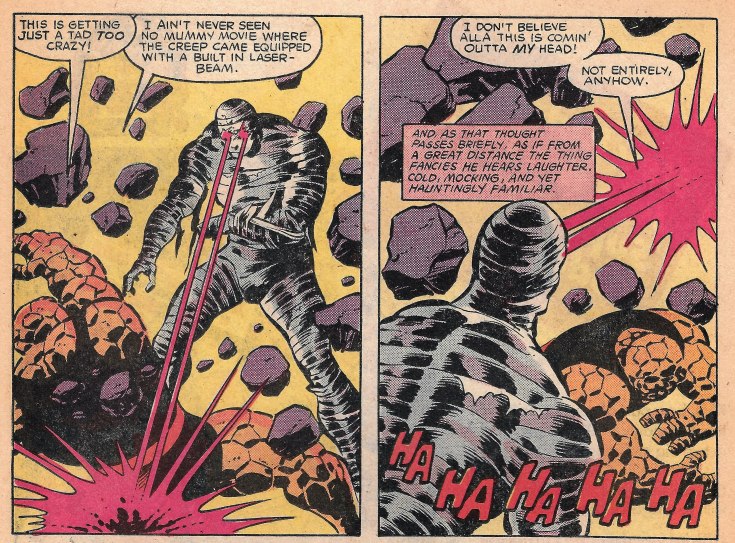 Now improved with eye-mounted laserbeams. And since we know all this is being controlled by that guy behind the scenes, I've now figured out who he must be. That guy has to be… 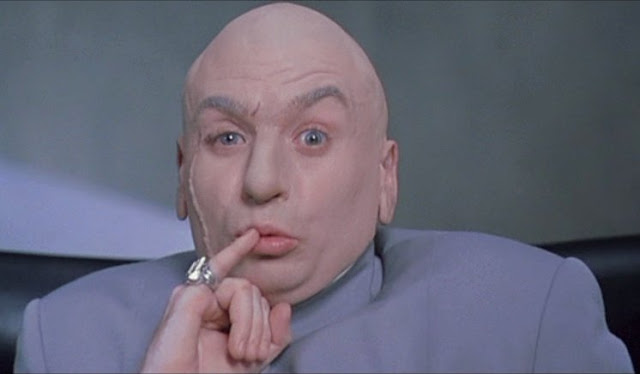 Sorry Marvel, but the laserbeams gave it away.

Due to this unforeseen weapons addition, the Thing gets blindsided when it lasers a hunk of ceiling down on him, burying him in the rubble. Thankfully he survives and punches the monster to dust, uttering his standard "Clobber time" catchphrase. 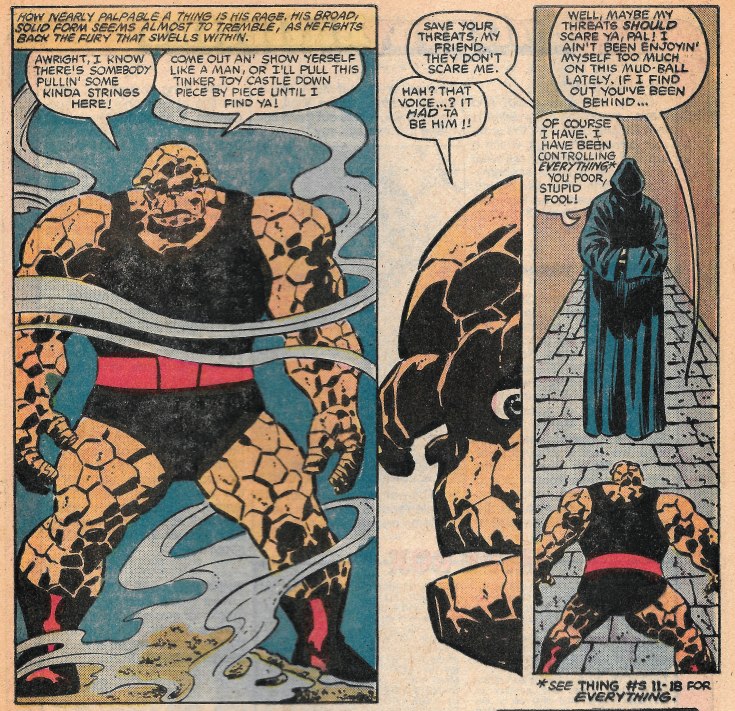 With that he's left wondering what next, when in a stunning deviation from a normal serialized comic book story, the main bad guy just appears in front of him. Looks like we will get to the bottom of this mystery pretty quickly. 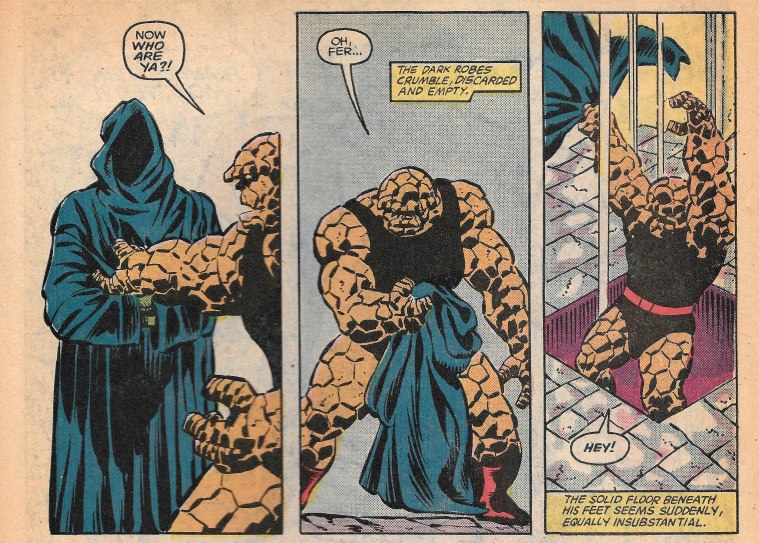 Unfortunately, no. Because that's not how comic books work. So Ben falls several floors only to land at the feet of the next boss battle in this side-scroller of an issue, something that will have to take place in Fantastic Four 274, as Byrne tries to get some crossover appeal between the two (for sales I bet). 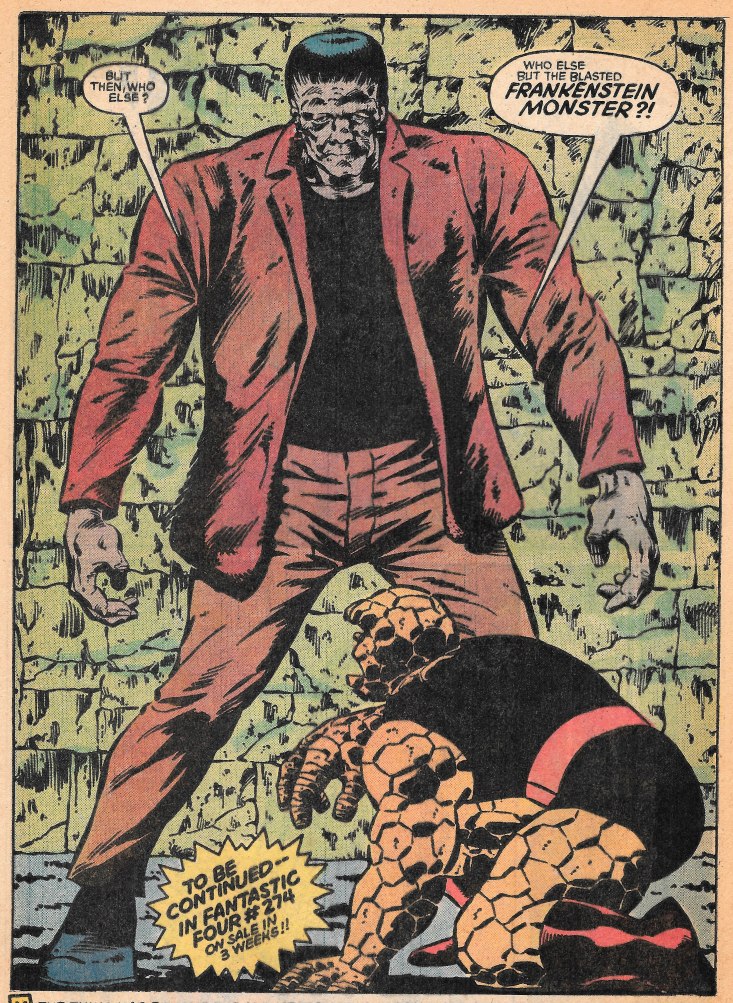 Frankenstein's Monster! We will leave off there until tomorrow, folks…
Posted by SonOfCthulhu at 6:07 AM