Some random Spider-Man books, Part 9
My childhood feels for this are thrown in the garbage 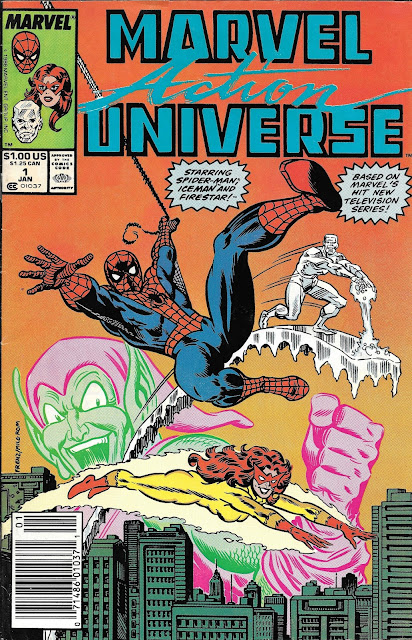 Repeatedly...by Iceman, of all people

Marvel Action Universe was a one-shot in the late 80’s that reprinted Spider-Man and his Amazing Friends #1 from 1981.

The original book spun out of the popularity of Marvel’s Saturday morning cartoon of the same name, a weakly linked affair that replaced several characters in Spider-Man’s comic universe with super-powered replacements, removed all of the girlfriend drama and basically de-fanged or de-clawed everything good about his mythos.

The leftover bits consisted of a Parker residing in the fictional town of Shady Glen while attending college, a smart mouthed version of Iceman, a new addition fire-based heroine named Firestar and Aunt May’s pooch companion named Ms. Lion. The group had a secret “Spider” lab they could access by flipping a button with Aunt May gone that consisted of various parts of the living room flipping around to reveal computers and monitors. Firestar was a stand in for Human Torch, who was possibly under license to another animation house.

The stories were dumbed down and the action silly in comparison to the 1969 series the preceded it and the 1994 Spider-Man cartoon that came after. Both series of those other series hewed closer to the comics version of the character and didn’t shy away from including content that might be a bit challenging to over-protective parents. (such as Spider-Man getting shot at by police).

For the inside skinny on things you might not know about the Spider-Man and his Amazing friends, I’m going to direct you to a fact-filled youtube put out byComicsAlliance.

This book came about as the TV show rolled into syndication, but it is just a reprint and the dollar bins are full of them if you look. I wouldn’t recommend it for an adult reader though, but it fits into the youth category easily enough. 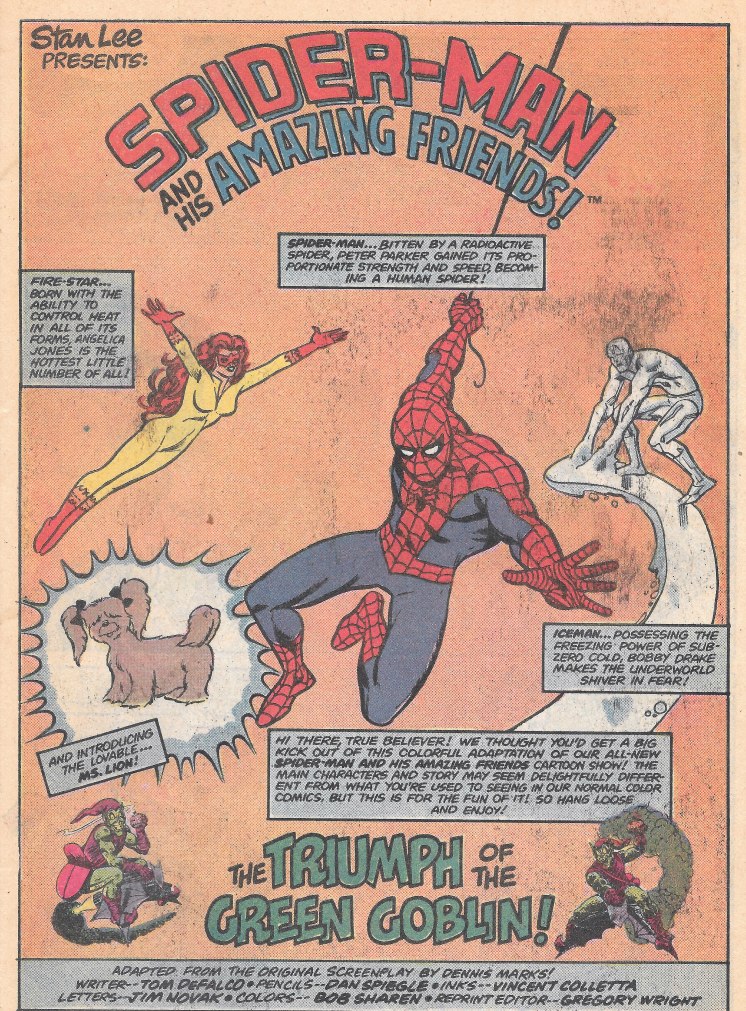 So what do we have under this flashy splash page?

I’ve always heard such bad things said about Vince Colletta’s inking, but here is a book that even his marks-a-lot inking style appears to have no effect on. Many of the panels are simplistic with these beginning few being the most complex out of the entire issue. Norman Osborn, a/k/a The Green Goblin, is being flown in a prop plane home from his stay at the sanitarium. Why not a car? Why indeed. We get a quick recounting of his TV version Origin here and then the plane gets struck by lightning. 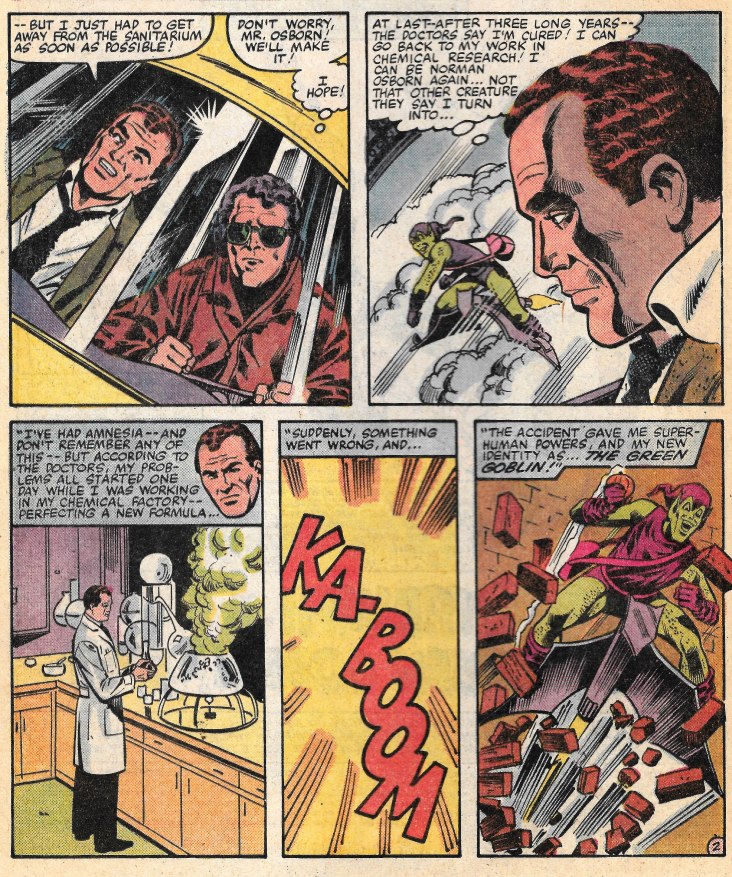 Forced to parachute out, a much chunkier version of Norman takes a bump on the head and suddenly he’s all evil again. And he should go on Weight Watchers. 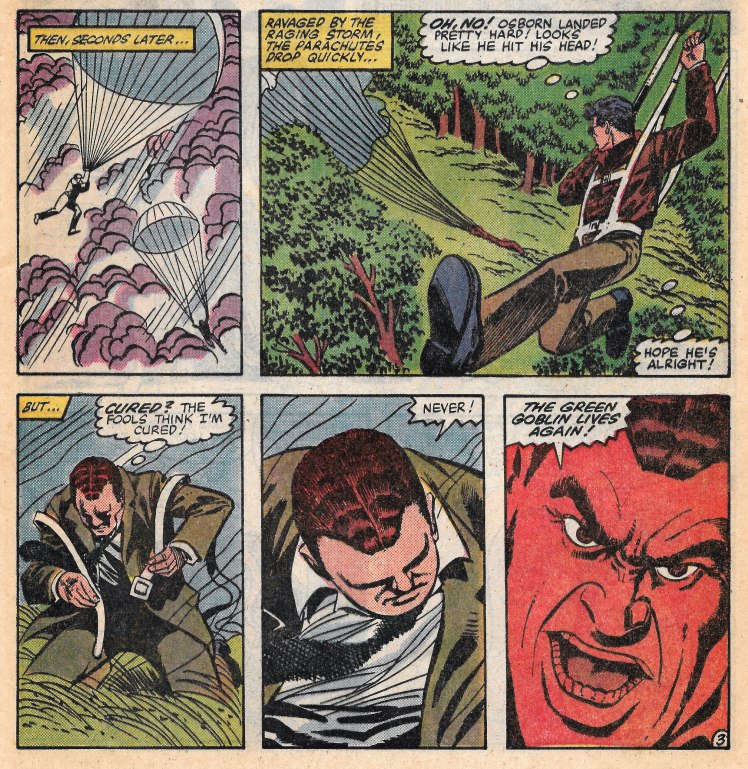 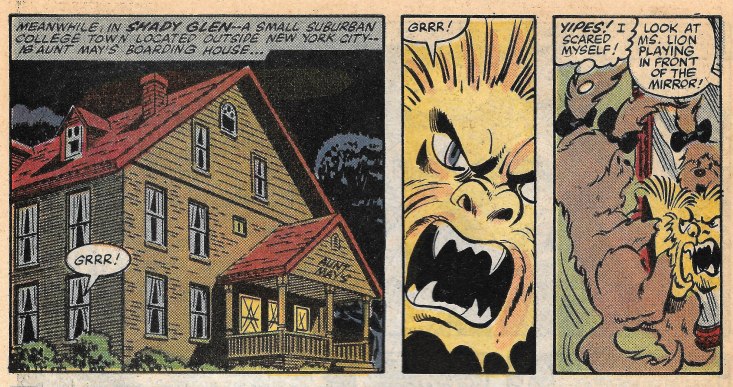 …which I find much more annoying than I used to when I watched this show as a kid. Then we move on to Angelica Jones (Firestar) and NORMA Osborn getting dressed for a costume party. Yes, they changed Harry Osborn into a girl, named him NORMA, and made her Norman’s neice just so they could have a woman in peril in this thing. Even the cute part about Angelica dressing up as Spider-Woman as a private joke on Peter doesn’t make up for the amount of rage I had to swallow. 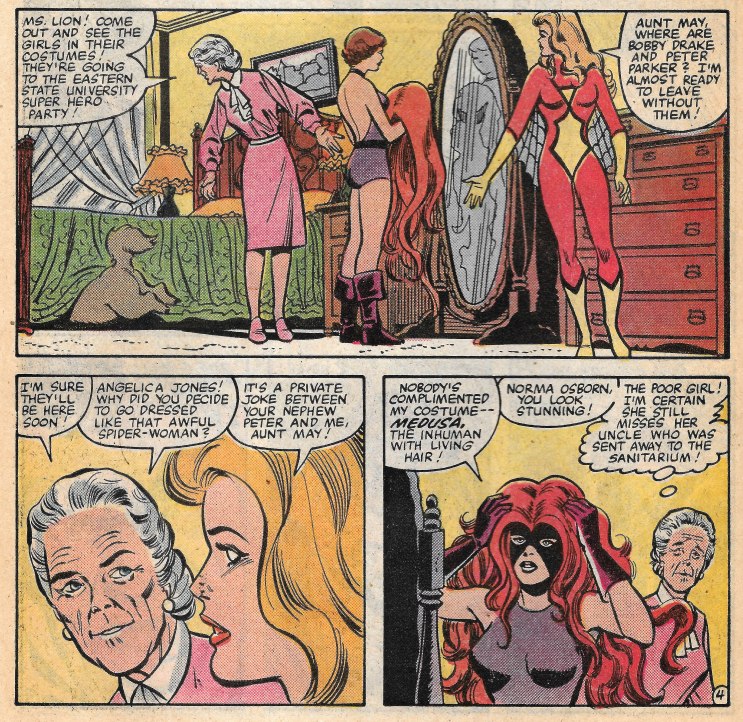 Moving on, Bobby Drake (Iceman) dresses as Captain America and Peter dresses in a flea-market version of his own Spider suit. They head to the party which is filled with bad versions of Marvel 616 heroes. Had Dan Spiegle been a bit slyer he might have snuck in a DC character or two, but no. Note how “coloring book” all the panels are. Not sure if this is Spiegle or Colletta’s doing, but it fits the fluff that passes for story here. 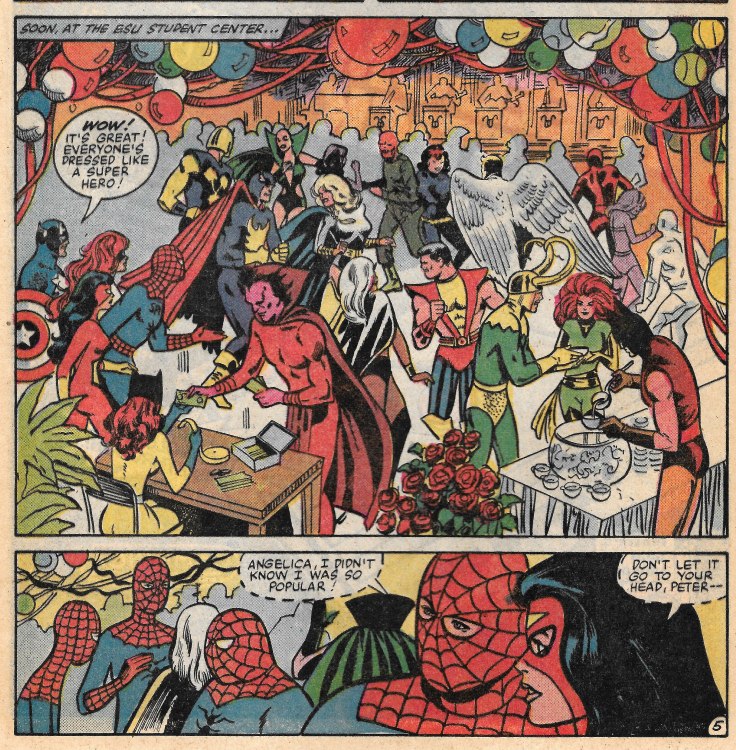 Spidey gets freaked by a couple of Goblin cosplayers who are hanging suspended from wires when all of a sudden his actual spider-sense goes off. 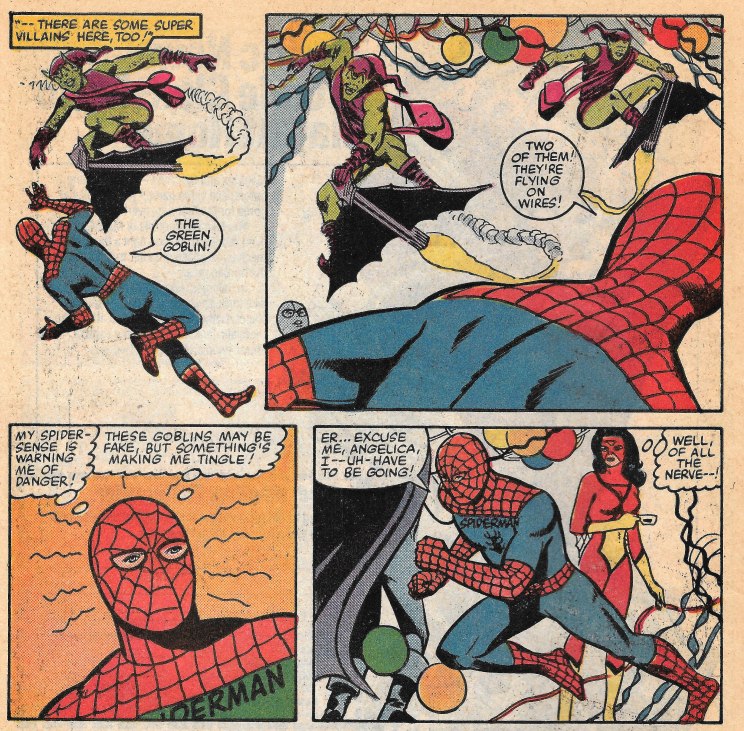 Peter getting freaked begs the question of whether or not this universe had a Gwen Stacy and if so, did the Goblin kill her? I am expecting no as the answer to both of those, otherwise Osborn wouldn’t see the light of day even if cured, I would hope.

Spider-Man rushes to the Osborn building, because in this universe his spider-sense acts like a divining rod that takes him to where trouble is brewing. Hey, I ain’t writing this, folks! Don’t blame me. 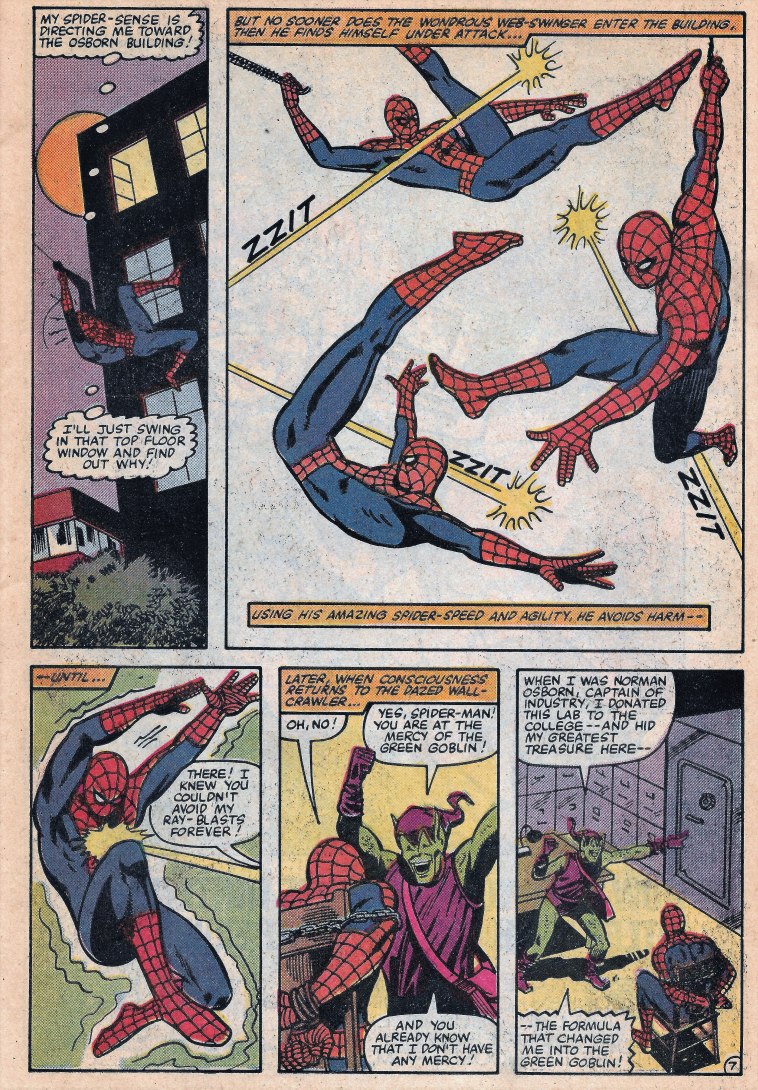 Then he is shot at by the Goblin with some kind of ray gun which the Goblin never actually brandishes nor do we see. He dodges against a backdrop so lacking in detail that it is easy to mistake it for Spider-Man bumping into Ben Riley and Miles Morales for a single panel. Then he is tagged by a shot and has to listen as the Goblin explains his plans so that Spider-man knows exactly how to foil them later.

Okay, I knew not to expect much going into this, but I have to say that I expected more than this. It is just silly. The horrid part is that I LOVED that stupid show growing up. My generation had the ’69 Spider-Man as a model of good Spider-Man animation. SMahAF blew that one away in terms of look. Yet I had forgotten all the mythos cut out of the show and the juvenile nature that was the hallmark of this version of Spider-Man.

Like the fact that Goblin’s plan is to use his formula to make everyone look like himself. EVEN THOUGH THE GOBLIN SERUM DOESN’T DO THAT! HE’S WEARING A FLIPPING MASK! 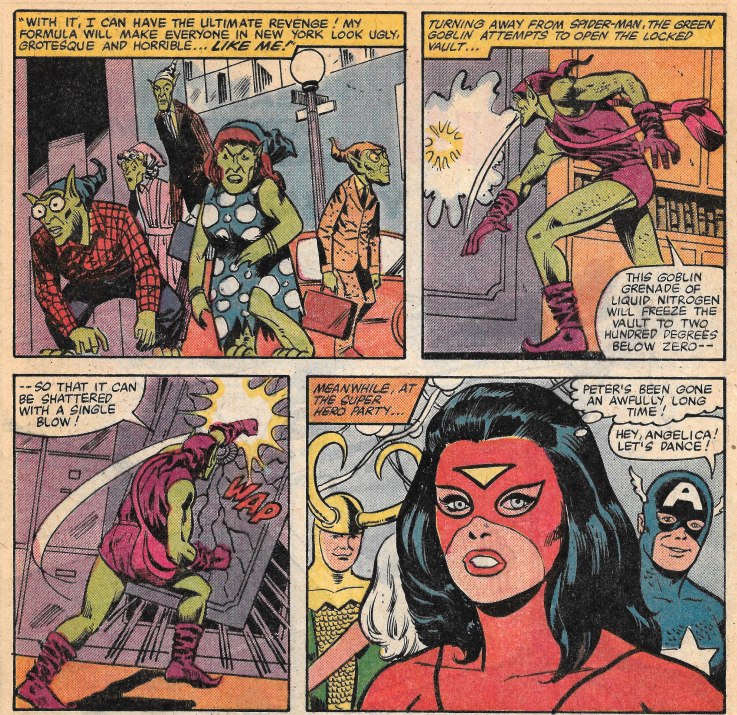 Okay, let’s just get through the rest of this, shall we. Angelica senses Spider-Man’s in trouble using her…woman’s intuition maybe? Let’s go with that. And she convinces Bobby to leave the party too. The Goblin doesn’t find his formula and realizes his niece might have it, so he goes to look for her, but not before setting up an overly elaborate and easily escapable trap to kill or injure Spider-Man. 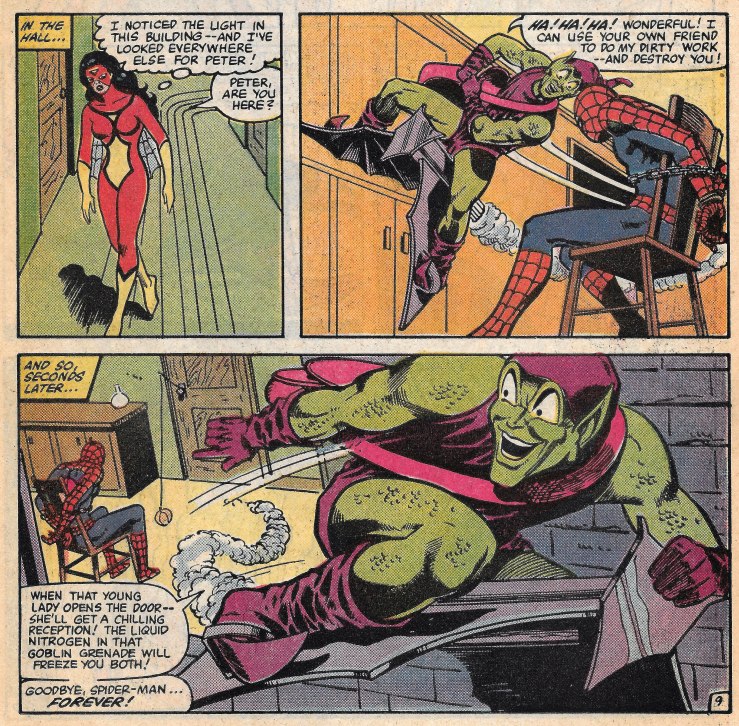 Which doesn’t work because Spider-Man says “Firestar, look out,” clearly enough information to cause her to flame on and burn through something-something and he’s fine. 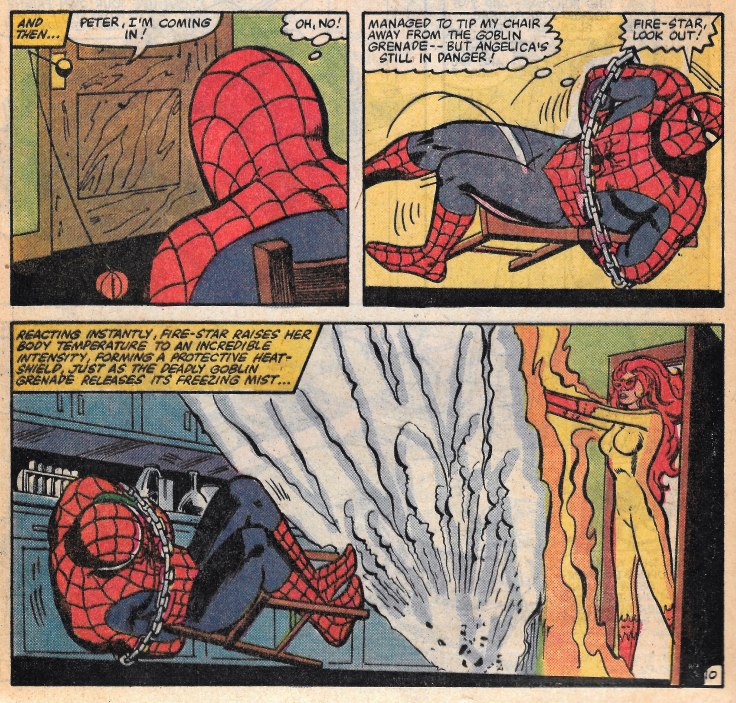 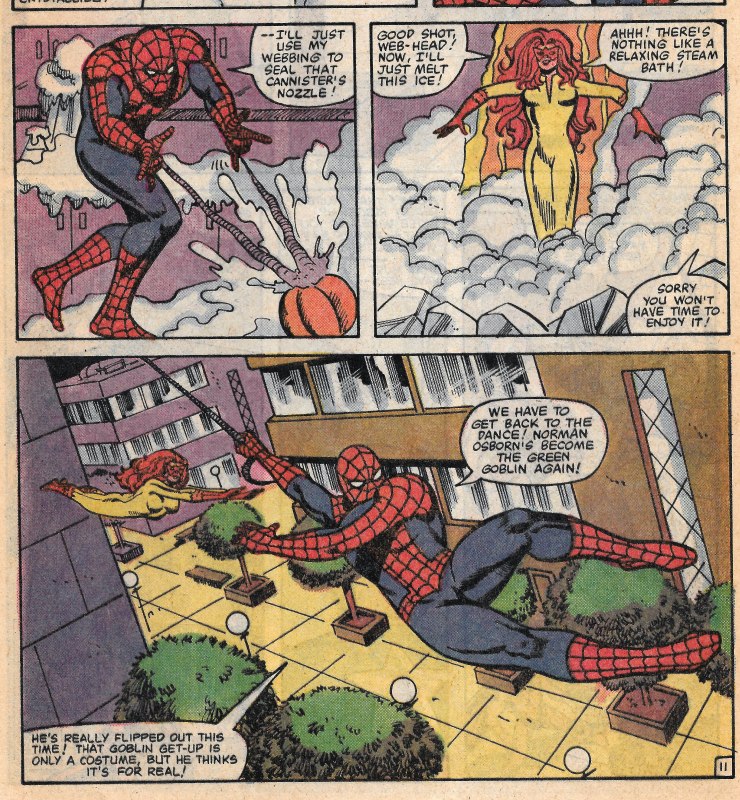 Oh wait, they must plug the pumpkin bomb up with webbing and melt the ice and THEN they can leave. People may be exposed to Goblin serum, but we must be all tidy first. 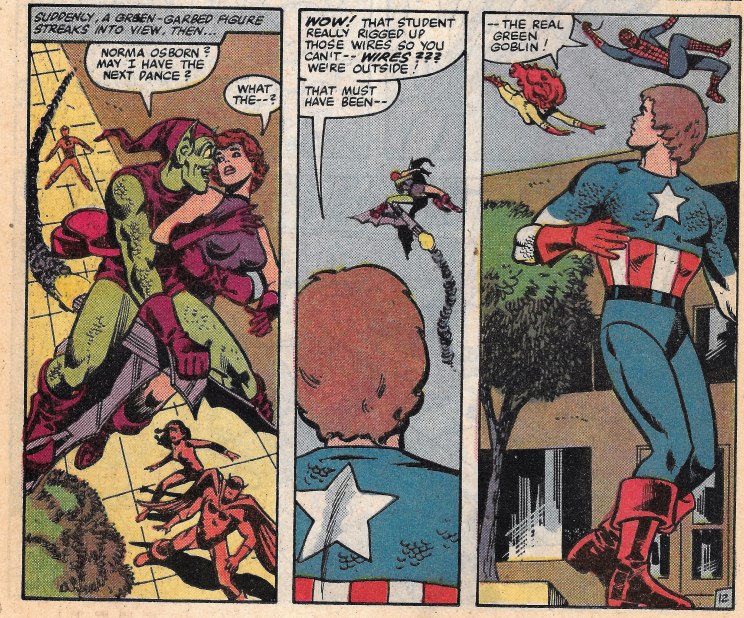 Norma gets stolen from right beside Bobby and he is so dumb he just lets the Goblin get away with her. Who lobotomized Iceman, that’s what I want to know. 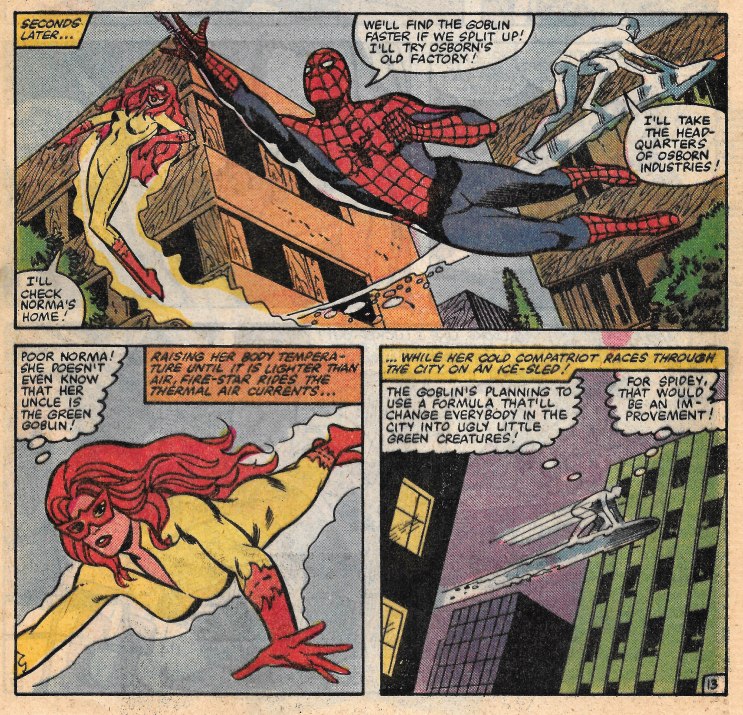 And not only does he let him fly off with her, he doesn’t even think to turn into Iceman and follow them. So by the time Spidey and Firestar arrive, they have to do this “search for Norma” thing. It appears all he can do is think of cruel things to say to Spider-Man. I never realized that Iceman was such an A-hole in these. 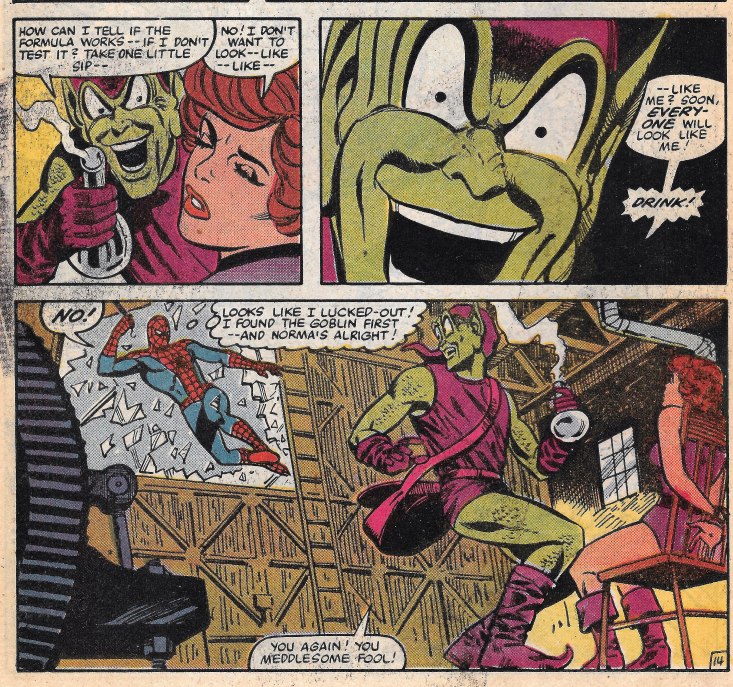 Meanwhile the Goblin’s got his formula together and is attempting to make Norma take a drink. Spider-Man crashes in at just that moment. 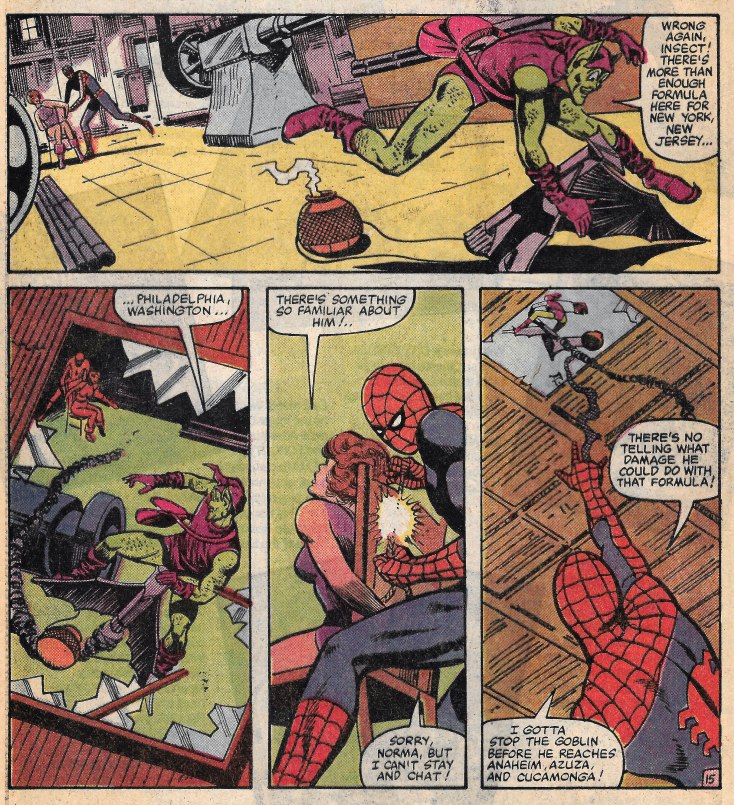 Spidey destroys the beaker, causing Goblin to flee. However he has enough produced to seed the nearby water reservoir. Peter frees Norma and then hitches a ride. 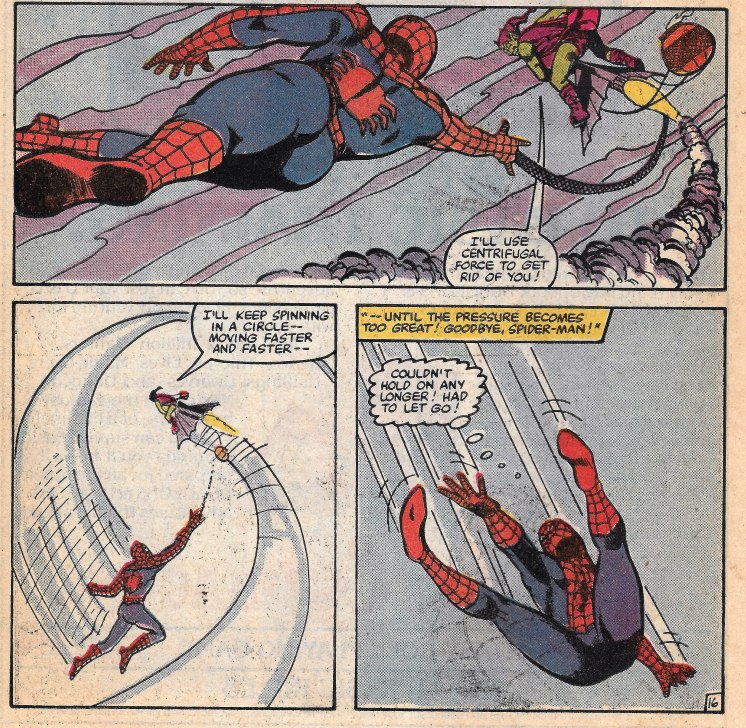 The Goblin does his best to shake Spider-Man off, which is pretty successful. Just as he’s falling to his doom, his “amazing friends” show up… 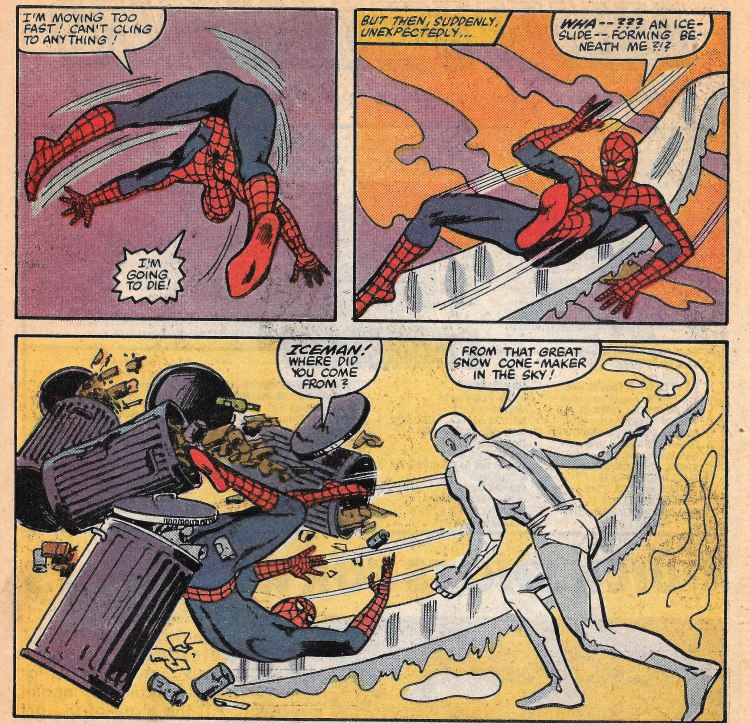 …and Iceman does this, which is like something he does in the first show. Now I’m pretty old so I can’t remember how many times Iceman would throw Spider-Man into garbage cans, but this is a total dick move on Iceman’s part. He could deposit Spidey anywhere. Spidey should extra a little payback for this. 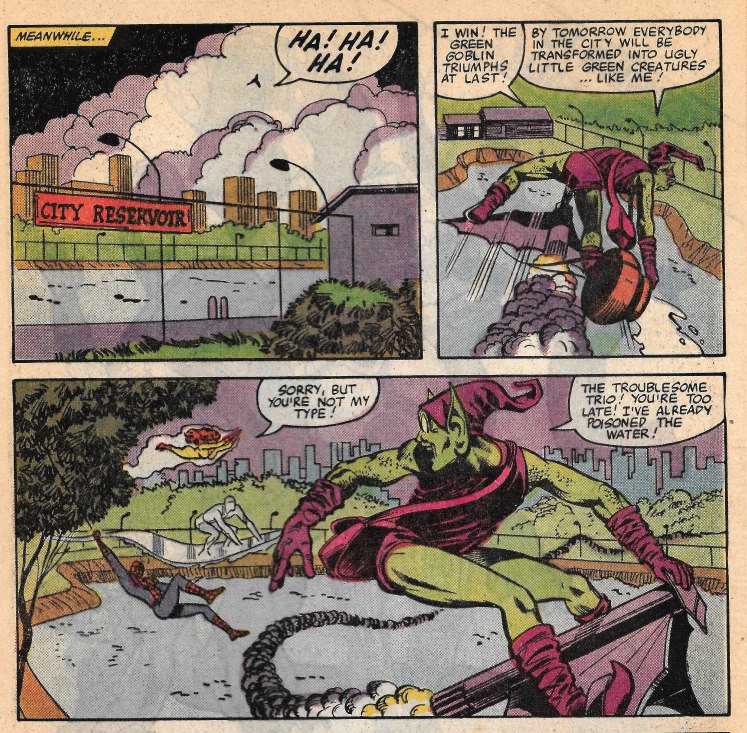 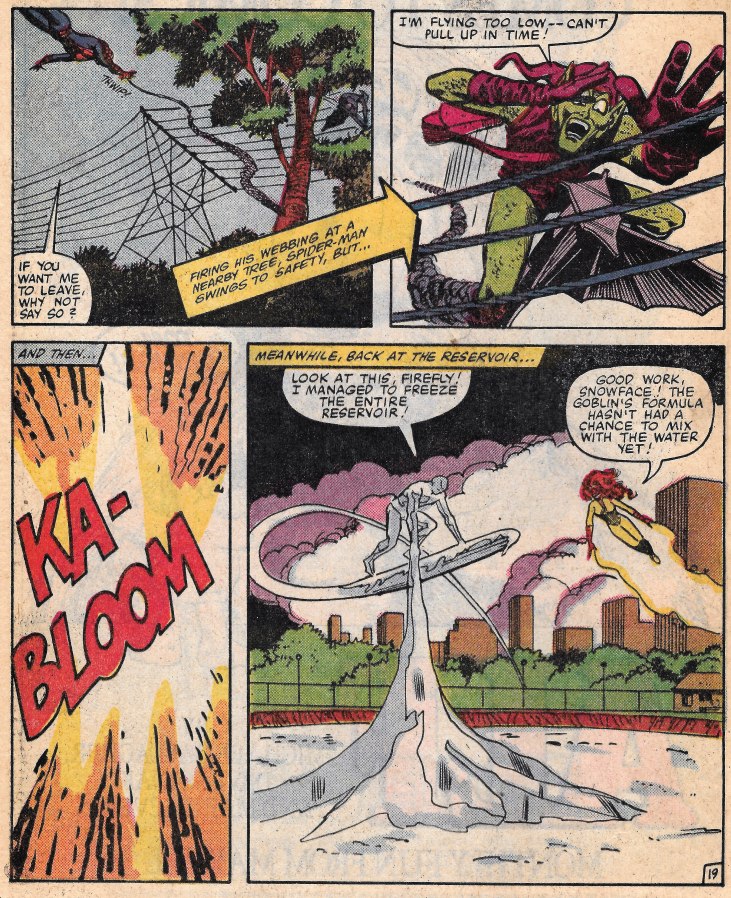 …by throwing him into some power lines (that’s kinda deadly), they must freeze the water in the lake completely.

But all’s well in the end because they use Firestar’s power to carve the goblin serum part out of the lake before melting it back and Norman survived that horrific explosion. Somehow.

Oh, and the dog loves Peter. That was the important part of all of this.

This issue proves you can’t ever go home again and that nostalgia should be left alone. I didn’t remember the villains being this lame nor Iceman being such a constant jerkwad. The series hasn’t aged well, in contrast to the other Spider-toons made before and after. It’s probably best if we put this one back in the Crapbox and never bring it out again.
Posted by SonOfCthulhu at 3:15 AM