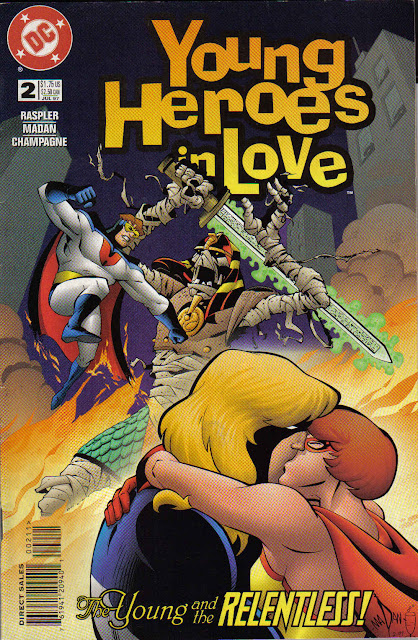 Why am I hearing Jackson Browne singing an altered version of “Lawyers in Love” whenever I touch this book?

There is an animal part of all of us that is turned on by soap operas. It was love of soap operas that caused a majority of the stories in Greek and Roman mythology. Sure, they were also trying to explain natural events, but look at every myth and you find the germ of today’s “As the World Turns”. It’s a fact that we love the open-ended, ongoing dramatic tales with reoccurring characters doing dastardly deeds and pursuing hopeless romances. It’s prevalent today in pro-wrestling events and TV sitcoms. But the place we see it most often is in comic books.

Now comic books don’t necessarily like to compare themselves to soap operas, but if you cut out all the battle scenes, what you are left with is an ongoing series of tragic breakups, unlikely couplings and appearances by evil twins. Our monthly fix from a book has to include peeks at a superteam’s ongoing drama. We need to know if Mary Jane still loves Peter, if Batman is ever going to admit his lust for Catwoman (or Robin) and if any of the X-Men are going to have a mental breakdown because the public hates and despises them. Like it or not, comic readers love soap opera drama, even if a majority of them would balk at someone implying so.

It is a very rare thing to find a superhero book that hints at this link between comics and an age old medium that has from inception been aimed at housewives. Yet Young Heroes in Love not only hints at it, the book positively screams it at the top of its lungs. Note that even the tagline of issue two is a play off of the title of the popular daytime soap “The Young and the Restless”. Internally the book delivers on this promise, offering up superhero drama with very little head-smashing action.

Let’s meet who we have to work with here. All the characters were new, fresh meat to the DCU and in a novel bit of contracting are creator-owned concepts. First up is our team’s human torch, the carrot-topped Bonfire, and the resident strongman-brick, Thunderhead. Thunderhead is kind of slow, which puts him right up cliché alley. The writer does an about face from other team books though by making many of the other characters treat him with less than perfect respect. Here’s an example of Bonfire tossing out a knock that goes right over the poor guy’s sub-standard IQ head. 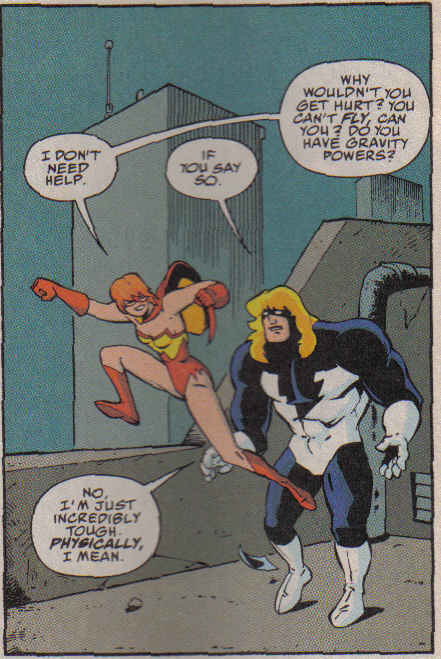 Next up is Hard Drive, the team’s telekinetic powerhouse and unofficial leader. He seems to have the hots for MonsterGirl, the team’s shapechanger/brick. They are getting pretty cozy here while Junior is eavesdropping. I didn’t learn till later that Junior has one of the suckiest powers ever, he was shrunk by lab chemicals and can never regain human size. That would make me a little peeved, if I were him. Needless to say, he also has a crush on MonsterGirl. 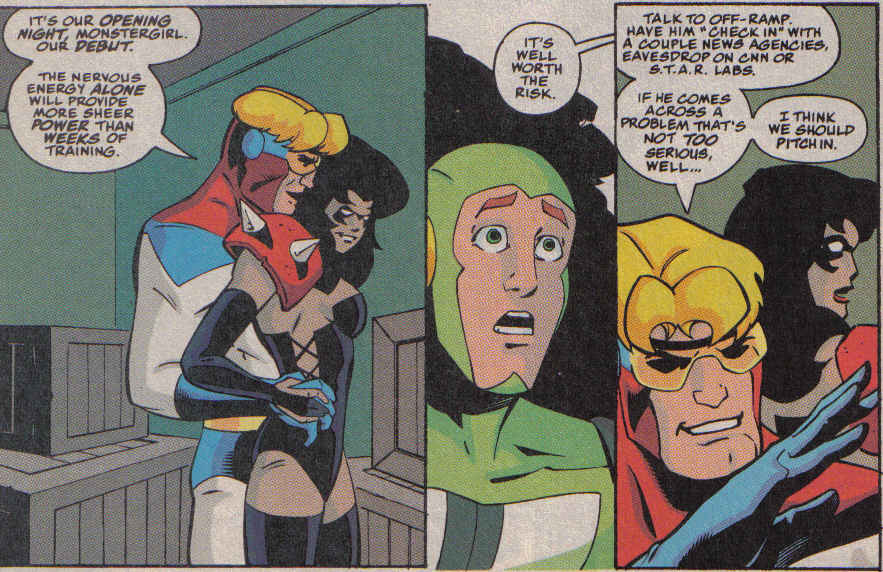 There’s something about a guy who’s superhero name is Hard Drive that just rubs me the wrong way. As we find out later, my instinct is dead on. But for now we have to deal with “Dunderhead”…oops, Thunderhead filling in his pal Off-Ramp about his patrol with Bonfire. Off-Ramp is our teleporter. I liked him best of all these guys because he had heart. He was the only one that treated Thunderhead with any respect and you just gotta love a guy that chooses a cherry-red Plymouth Fury as the team’s mode of transportation. “Hey mom! I was just rescued by Christine!”

Last up is Frostbite, who starts to hit on Bonfire in the team locker room. Frostbite is our Iceman stand-in. He’s played by that guy Snow Miser from the Rankin/Bass show A Year Without A Santa Claus. For such a “cool” character he sure is trying to generate a lot of heat. 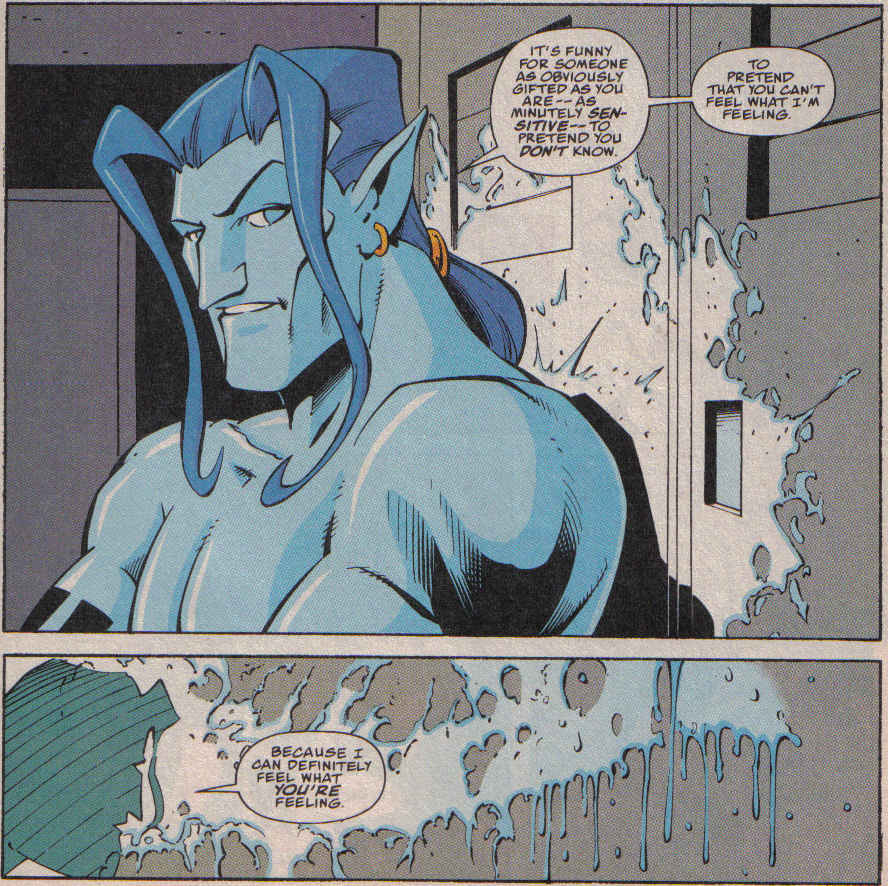 I’m pretty sure she’s feeling what he’s feeling that she’s feeling. Or something like that. I’m also not so sure how this would work out. A person with fire power shouldn’t date a person with ice powers. I think that’s in the superhero rulebook somewhere. And I don’t even want to think what the consequences of them trying to get physical would be.

Junior interrupts them at this point anyway, distressed by MonsterGirl and Hard Drive’s heavy petting. Seems Junior is carrying a small torch for her and feels Hard Drive is moving in too fast. Frostbite treats him rather cold as he broke in just as things were getting hot. (crap, this book has me sounding like a commercial for The Guiding Light!)

This break also allows us to peek in on Off-Ramp and Thunderhead just as MonsterGirl comes in. Note how going “on patrol” here appears to be used as colorful euphemism for having sex. 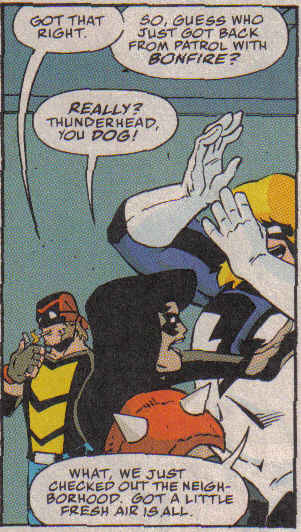 Follow this with MonsterGirl winging one right off Thunderhead’s brow. 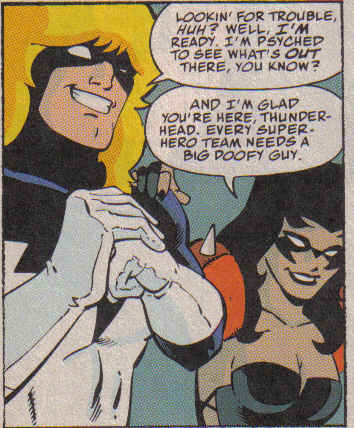 Awww! Go easy on the poor dumb lug, guys. Next we find Junior and Hard Drive having a little heart-to-heart. Hard Drive starts suggesting that Junior trust him more and it suddenly becomes apparent that Hard Drive is mentally enforcing these suggestions. Seems he’s a high-level telepath as well, but hasn’t told anyone. But we have to take a break from all this drama because Off-Ramp has been monitoring various emergency channels in hopes of finding trouble for the team to tackle. And boy has he. 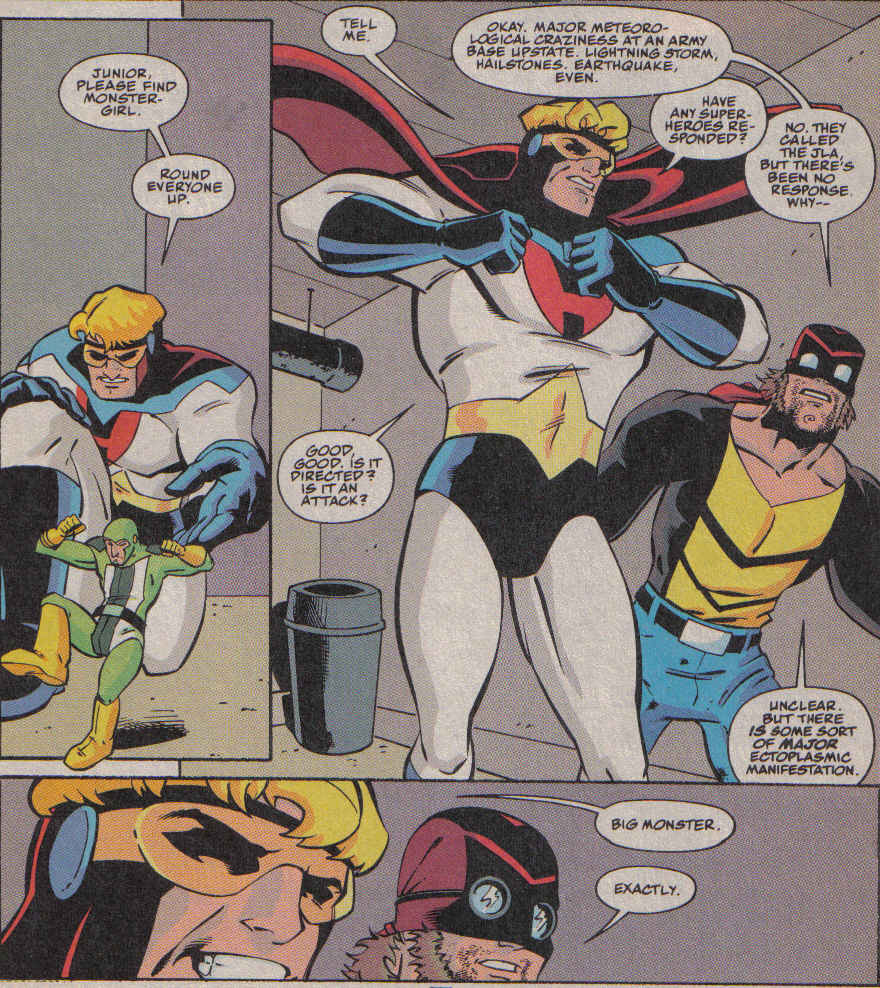 The big monster turns out to be a giant mummy wielding a glowing sword. Our four page battle is a letdown, however. At no time does anyone try to find out where this thing came from, what its motivation is or why it’s busting up the town. They just beat on it until it explodes. That’s really a cop-out. If you’re going to take so much time making the heroes appear realistic, you need to spend time fleshing out the villains as well. 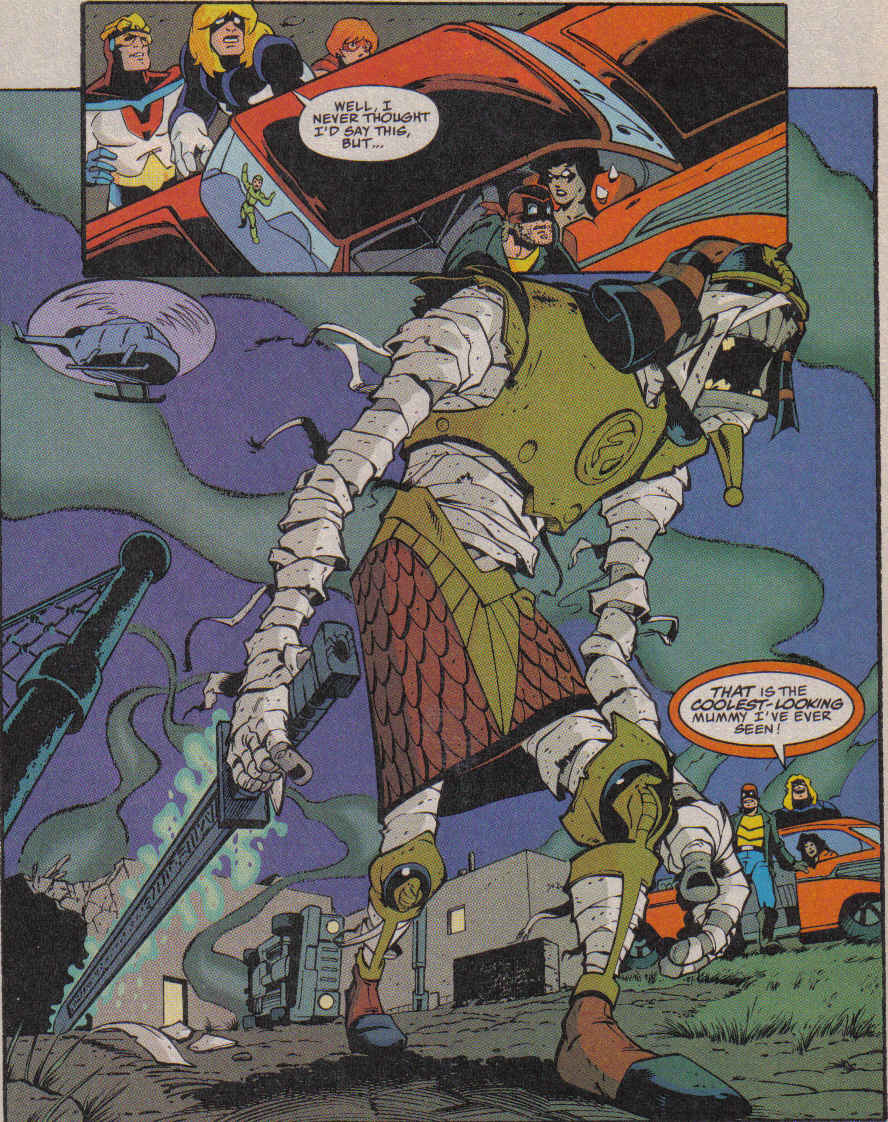 While I’m reminded of Giffen’s early Justice League or some of the lesser parts of Invincible, YHIL doesn’t quite win me over. I hate to say it, but it’s too soap opera-y. Other readers must have thought the same because the series run was 17 issues and a Year One Million tie-in. I think the problem lies in the promise of the word “superheroes”. Nothing in this mag suggests these guys merit that title. Since they don’t have the pedigree of the JLer’s Giffen was working with, the whole premise suffers. It’s a well-written book though, and if you can find a copy or two in a quarter bin I suggest you check it out.

Posted by SonOfCthulhu at 7:44 PM