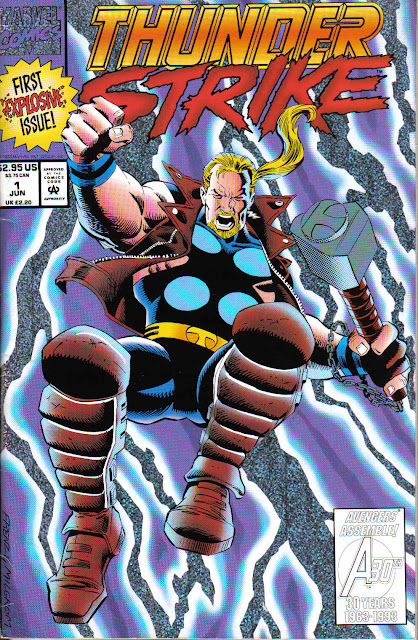 Almost Thor vs. Executioner-lite while reggae Dr Doom waits in the wings

Back in 1993, two people got the idea to clone Thor. No, I’m not talking about Reed Richards and Tony Stark. I’m talking about Thor scribe Tom DeFalco and artist Ron Frenz. After a run in Thor’s own magazine subbing for the God of Thunder, Eric Masterson picked up the enchanted mace called Thunderstrike and took to protecting Earth as the superhero Thunderstrike in a new book. I think Marvel was really hoping for lightening to strike twice off the same material.

Let me get something out of the way first, I love Thor. He is a really cool character idea. He has mythological roots that can be mined for stories. He has this complex relationship with both his father and half-brother, heck humanity in general for that matter. Thor looks cool and kicks a lot of bad-guy butt. But never have I looked around and said “I sure wish there were more Thor books out there.” I’ve never wanted to read boy-Thor or Thor’s cousin, Thoreta. Thor’s book is enough. So the editorial decision to put this book out is kinda weak in my opinion.

And Thunderstrike is an an obvious rip-off of Thor. Even the character in the book thinks so… 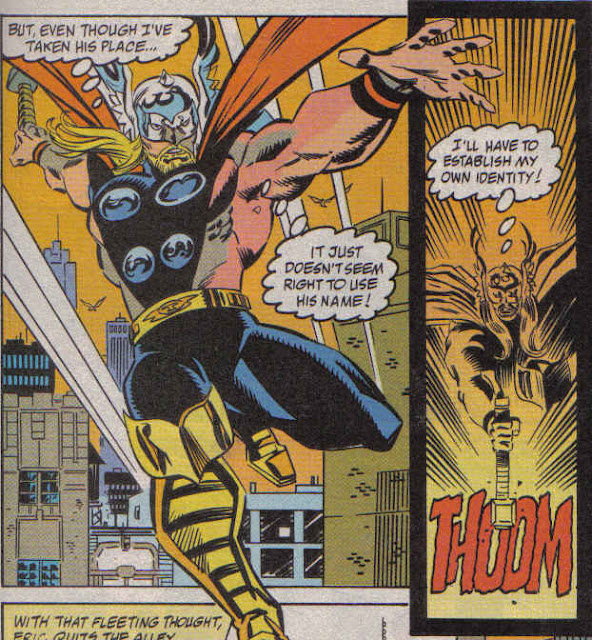 Note the “Thor”-duds. This guy has ripped off his image big time. But don’t worry, because he’s going to change his image before the book ends. On second thought, worry.

Who does “Thor-mark II” get to fight? A band of ruthless carjackers (generic villains). He saves their victim by utterly destroying the woman’s car. Looks like she’s going to have to call that GEICO lizard-thing about coverage for superhero abuse. 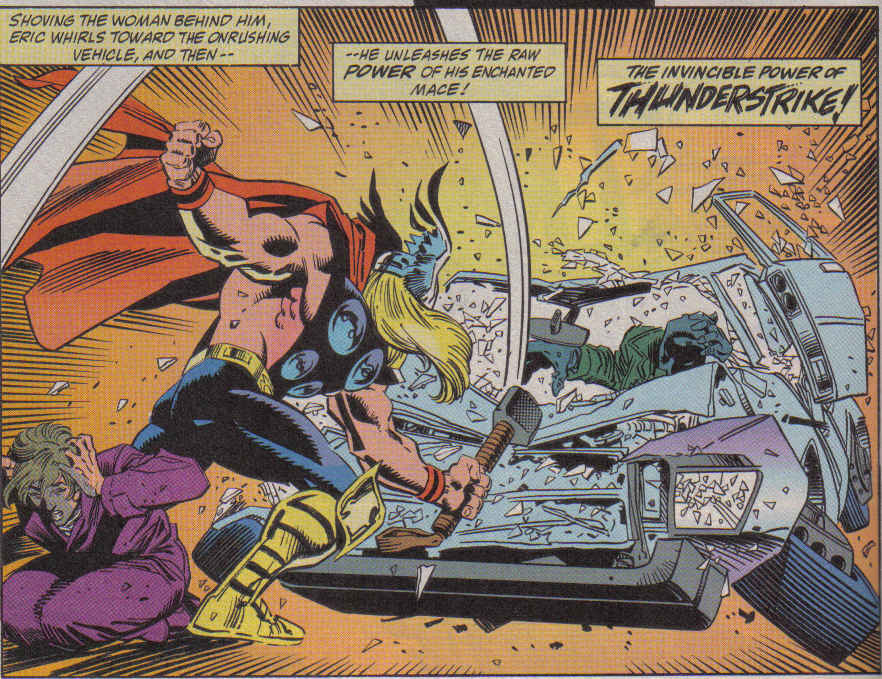 We’ll come back to those carjackers in a moment. First I want to show you Bloodaxe. Bloodaxe is the main baddy of this book. In essence Bloodaxe is Skurge the Executioner on steroids. What we learn in later Thunderstrike issues is that Bloodaxe’s weapon doesn’t just look like Skurge’s axe, it is his enchanted weapon. 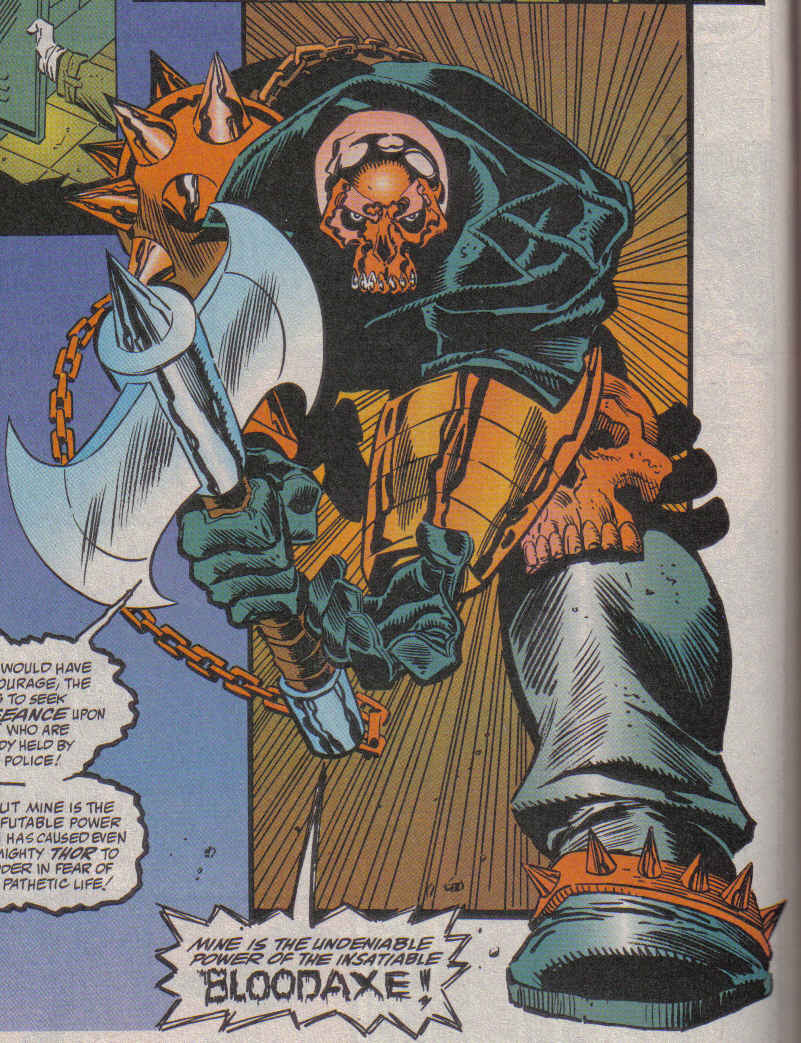 I want to also note a couple of things here about the art. Ron Frenz is a gifted and talented artist. His work on Thor after Simonson left the title was a homage to Jack King Kirby’s run in both content and style. Not many artists could pull that off. Ron is one of the few. In this book, he still has hints of Kirby but another artist’s style has trumped it. Looking through the issue, it’s very clear that Ron is aping John Romita, Jr’s layouts. The panels evoke JR, Jr’s art sometime after his run on StarBrand but before his work on DareDevil. Maybe 1987’s Spiderman run would be the closest to what Frenz accomplishes here. Take a peek and see if you don’t agree. 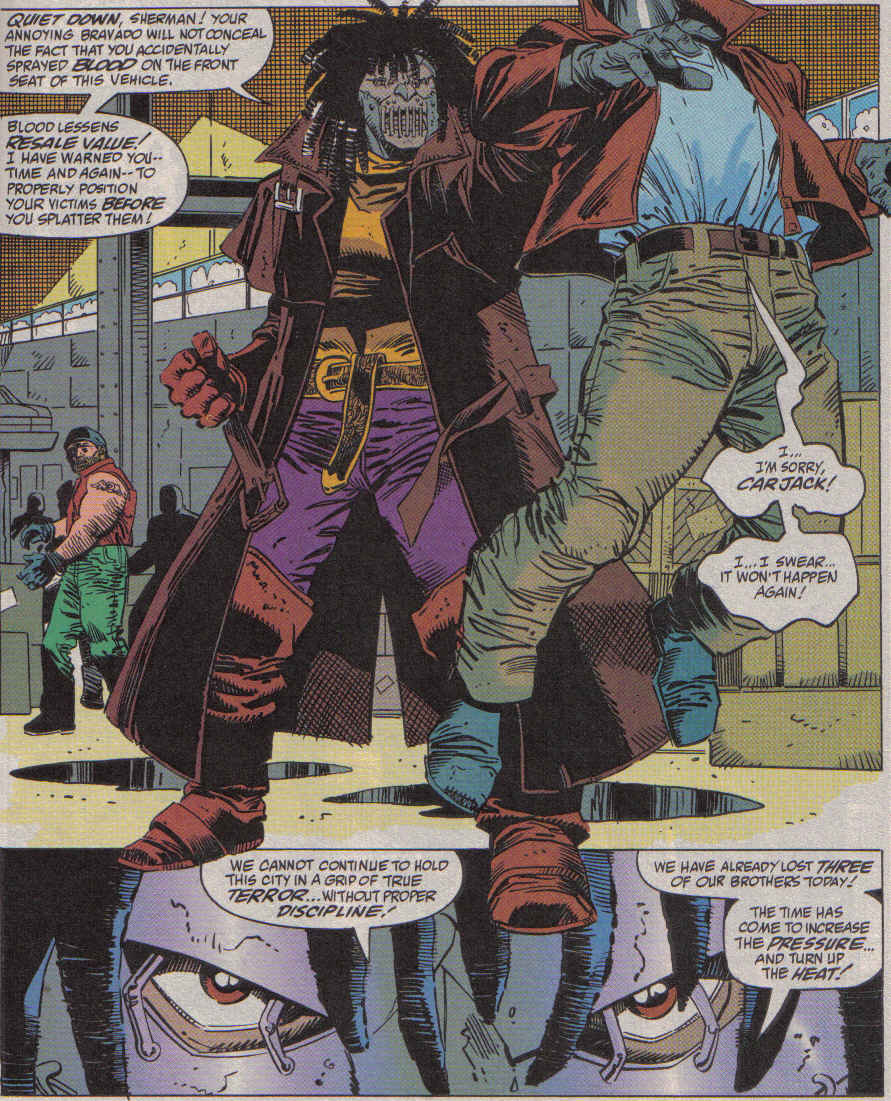 Even great art can only do so much with a character like Carjack. He’s villain number two in our sordid tale and the mastermind behind those criminals we saw on page one. I’d take him much more seriously if he didn’t look like Doc Doom meets Bob Marley.

“Ja man, you needn’t bother fightn’ us. We’re smokin’ ganja and goin’ on holiday.”  The worst part about all of this is when he takes off the mask after a police raid, we find out he’s a white guy. While this is an effective disguise (I took one look at that hair and thought: black guy), it does seem a bit racially insensitive.

As for the plot, there’s quite a bit. Carjack pisses off Bloodaxe, who comes gunning for him. Thunderstrike gets his butt handed to him while Carjack escapes. Then Eric decides to change duds so people don’t confuse him with Thor. Here is his final outfit: 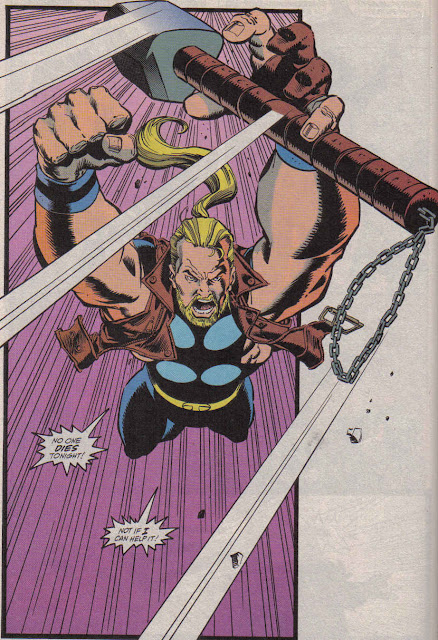 I’m still seeing double. If you’re trying to not to look like Thor, here’s some tips for you. Get rid of the big blue buttons, long blond locks, knee-high boots and belt with the “T” on it. I know your name is Thunderstrike, but perhaps it’s time to rethink that too. Maybe Beatdown? You could put a big “B” on the belt? Think about it and get back to me. 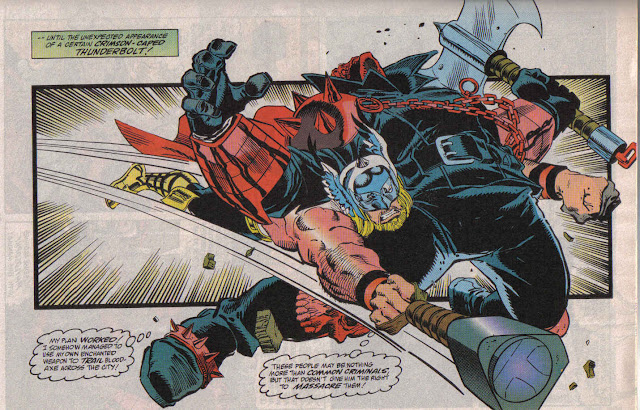 Well, a final battle with Bloodaxe leaves Thunderstrike victorious but allows Carjack to escape once again. As a bonus, Eric gets ahold of the actual Bloodaxe weapon. In all, the issue is very solid, but the story seems a bit of a rehash of a bad Thor story. It could be much worse, I suppose. It is worth noting that 24 issues in, Thunderstrike, the series, felt the final clap of cancellation.
Posted by SonOfCthulhu at 2:50 AM