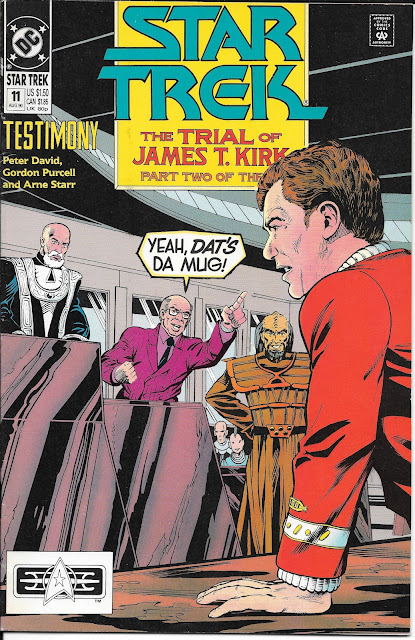 Here we are on cusp of being subjected to another Star Trek movie. Will it be a fun, mindless action picture like JJ Abrams first 2009 Trek film? Or will it turn out to be the head-scratchy, insulting mess that was JJ Abram's Into Darkness(2013)?
I don't have a clue. I stay away from spoilers or production notes of movies I plan on seeing. In the case of Star Trek, I even stay away from them on the movies I actively DON'T plan on seeing. And this is one. I would love to not have to watch it, but Cthulhu-Boy (my son) may force my hand. I am not looking forward to the experience.

Sorry folks, Into Darkness killed this version for me. I don't give my money to series that screw up this badly. Ask the Alien franchise after Prometheus.

What didn't screw up even the least bit was Peter David's 1989 comic book extension of the Star Trek universe. Set after Star Trek V: The Final Frontier, David took the iconic original cast near the tail end of their movie career, mixed in his blend of new characters, a smattering of old references and spun the mess of elements into a clever, homage-heavy but still enjoyable monthly.

The book that popped out of the Crapbox this time was the middle act of a three issue story where the Klingon Empire has finally gotten James T. Kirk to stand trial for the events of Star Trek III: The Search for Spock. The charges? Murder (of Commander Kruge, played by Christopher Lloyd) and a violation of the Prime Directive (more on that in a moment).

Kirk has hired a hot-shot defense lawyer to represent him.
David gets a minor detail wrong here. The defense attorney in the story is named Samuel T. Cogsley, and it is implied that he is the same defense attorney who defended Kirk in Court Martial, Episode 15 of the Original Series…BUT according to the official Star Trek resource, that gentleman was named Samuel T. COGLEY. Before the vast expansion of the internet age, details like this were probably pretty hard to pin down, so let's not give David a hard time on this one.
What including the detail of adding Cogley or Cogsley into the story does point out is the level of fandom that David approached the series with. My friend Brian Hughes, of 3rd Degree Byrne fame and a huge Star Trek fan, claimed that after a while David including all theses call backs tended to bug him.

"Peter David has a tendency, as most comic book writers do, to tie everything into everything.  See his Next-Gen novel 'Q-Squared' as exhibit #1.  So you can expect any of David's Trek related comics will be chock full of ties to TV Trek, even if  it means using a character you only saw once back in the 60's."

For me however, I welcome David's nods back to TOS and enjoy the heck out of his callbacks and remembrances.

It is good that I do because this book is, as Brian so rightly puts it, "chock full" of them. Anyway, the charges levied against Kirk also include violation of the Prime Directive. Let's start with the opening augment from Cogsley/Cogley. 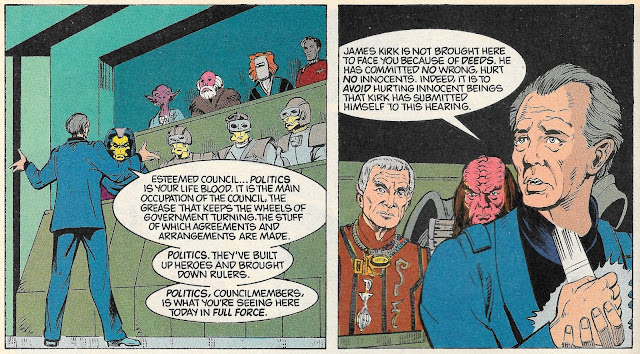 Nicely stated. We then hear from a new character from a prior issue of this comic book, The Salla of the Nasgul. David did a good job in creating the villain, a religious extremist/cult leader-type, even if he appears to have borrowed part of the name from Tolkien's Ringwraiths. The Salla appeared in issue number 1 of this run, which included an altercation with Kirk that I'll allow The Salla to explain. 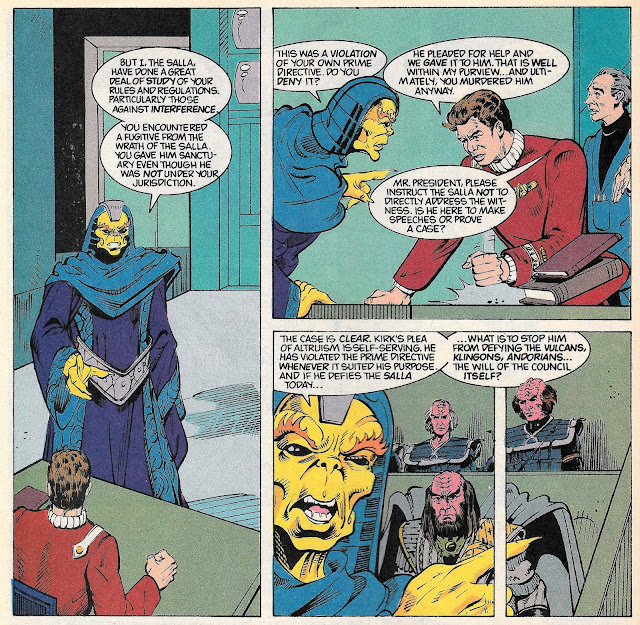 Before continuing I want to praise James W. Fry's pencils and Arne Starr's inks. While the books interiors are a bit sparse for my likings, the faces and anatomy really shine. It is neat to see photo lifts of the cast in their later years rendered so faithfully and I have to admit to a little bit of love for the book to have rendered them thus. We don't need a dashing 30 year-old stand-in for Kirk. We need a realistic older crew that fits in with the tone of David's storyline, which is exactly the direction Fry and Starr take things.

And back to that storyline, The Salla clearly has an axe to grind because Kirk didn't roll over and allow him to flat out murder his follower. This translates into a charge of violating the Prime Directive, which any Trek fan worth his salt knows is the principle of non-intervention in other cultures' affairs. And to be honest, a rule that Kirk has flirted with ignoring during his time in the center seat.

Looks like The Salla has reviewed Kirk's history. And that is where the book takes off into some great fan-love. This issue could show the screenwriters of JJ Abrams last outing how you do callbacks and nostalgia correctly, by incorporating them into the story in a way that is natural not just "Hey look, a Tribble! And Kahn! See! It's STAR TREK!"

Let's start with Salla's first witness, a gentleman by the name of Anan 7. 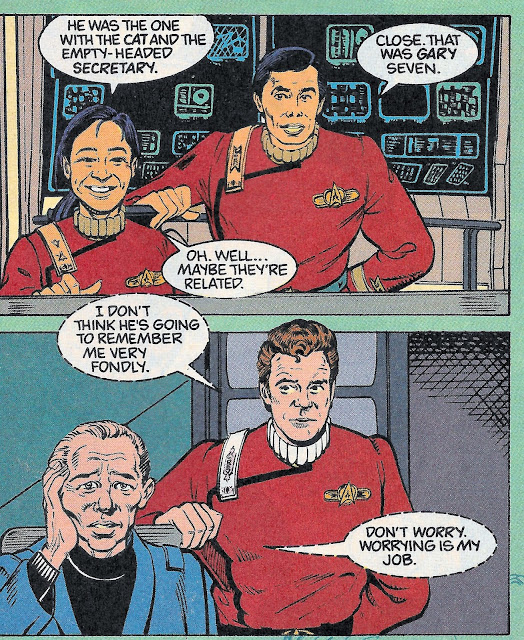 Sulu and his daughter throw out a nice little one liner on a different TOS character before we move on to who Anan 7 really is. I'll have to admit, I didn't remember him either until David has him explain his connection to Kirk. 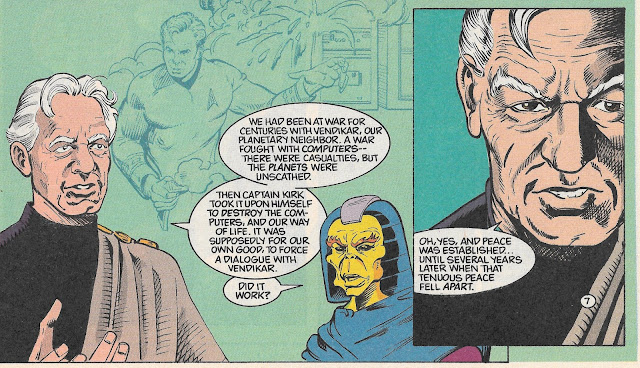 Oh, yeah! The episode was called Taste of Armageddon. I remember it now. Two planets using computers to determine who lived or died in a virtual war that tried to make the tragedy of endless conflict "civilized." The populace would voluntarily walk into disintegration chambers if they were considered casualties of an attack. The upside would be that no architecture or art would be destroyed.

Sad that they met such a tragic end here, but they knew the cost of all-out war when they started. The idea should never be to minimize its impact in such a way that it is considered routine. Perhaps they aren't quite civilized enough to make peace.

So yah, Kirk did stick his nose in there a bit. Any way to turn this around on The Salla? 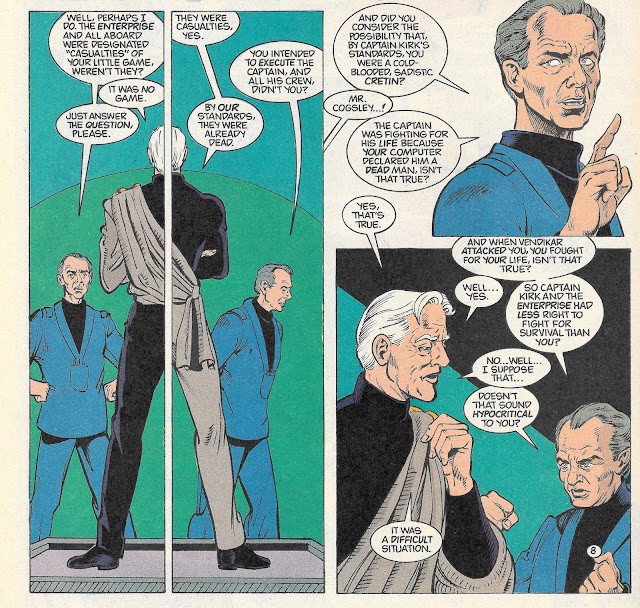 Note how David understands the principles of the TOS universe. It isn't smash-em up, sci fi action, like the Abrams reboot. It is thought-provoking with very little action, but tons of dramatic punch.

THIS is Star Trek to me and always will be. The drama of a series of intergalactic morality tales interwoven with pointed moments of action that serve to move the story forward but are not, in and of themselves, the resolution to the current conflict. It isn't enough for two bad guys to duke it out in Star Trek as an ending. Trek is cerebral. It is about concepts of right and wrong. It should never be defined as "the physically strongest character is the winner so his side is right." It has always been about something deeper than that.

And that's what Abrams, who never saw the series before being tapped for the reboot, completely missed about Star Trek. We will see if Beyond gets any closer to that understanding.

Back in our story, the next witness is called while we get a nice scene of Bones and Spock quibbling. I think David doesn't want us to forget we are in a Star Trek book or something. 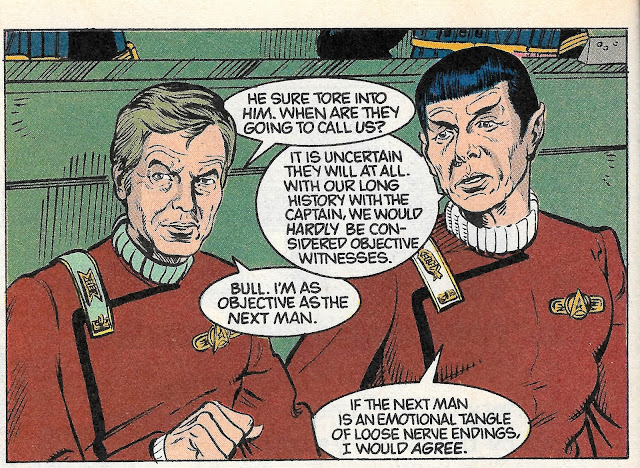 And another thing the movies have missed so far about TOS Star Trek: yes, it is an ensemble cast, but Bones, Spock and Jim are not just characters. Those three are metaphorical stand-ins for emotion, logic and an almost id-like instinctual understanding and drive. When any two of them are in conversation, the audience gets a front row view of their own intellectual processes brought to bear on an issue.

I can think of no better example of this than Star Trek II: The Wrath of Kahn. The scene where all three of them discuss the ramifications of the Genesis device. Bones comes at the problem with moralizing and emotion, Spock with logical deduction and analysis and Jim with a desire for action and conflict resolution. It really is masterful how these three interact.

Yet this same dynamic has not materialized in either of the new movies. Not only that, the character traits are not present in these new versions. Bones is largely absent or sidelined to supporting roles, Spock is shown as a sullen, emotionally stunted child and Jim is more of a James Dean rebel with no sense of authority. What a waste of an opportunity.

But enough about that, on display here is a clear indicator of what that should look like. Great job, David, seriously.
Our next witness should be no surprise to any Trek fan. And David gives them a grand entrance with a breeze by of his character R.J. Blaise. 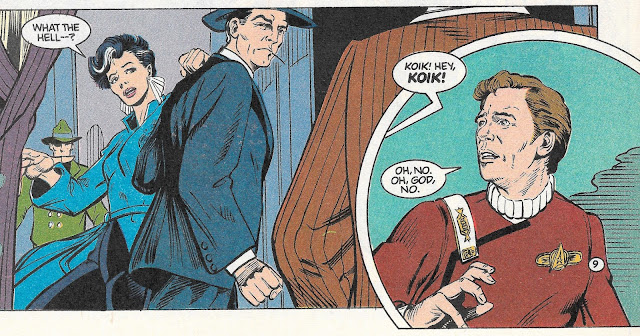 Oh, yes! It's the return of this fella. Make that "goodfella." 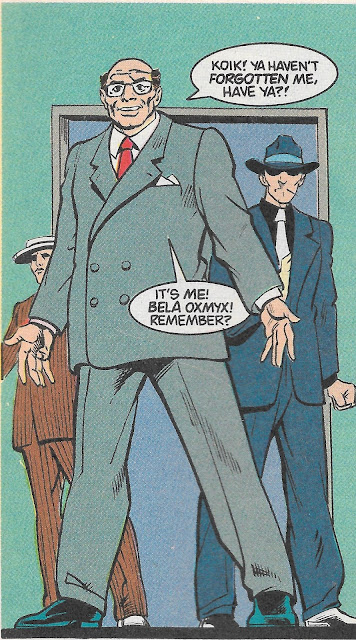 Bela Oxmyx, the wise-guy leader of Sigma Iotia II from the episode entitled "A Piece of the Action." Any trekkie worth his salt can see where this is going. First a bit of embarrassment all around though. 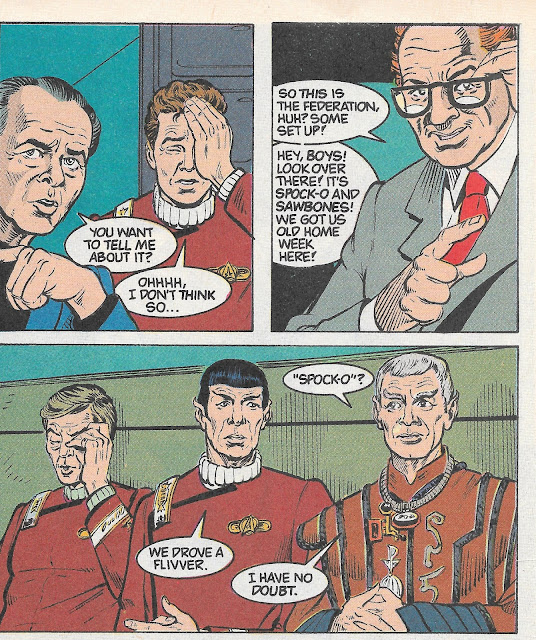 Amid the general humiliation, Bela does do something which hurts Kirk's case in a manner in which even Cogsley can't gloss over.

First Kirk tries to find out why Bela is there… 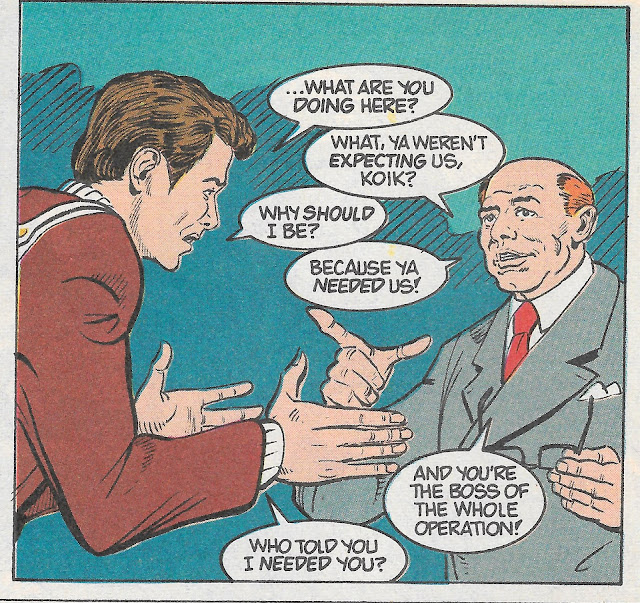 Then he takes a stab at explaining himself…

And if the judge won't buy that, he certainly won't buy what happens next. Just when it looks like Kirk could be off the hook… 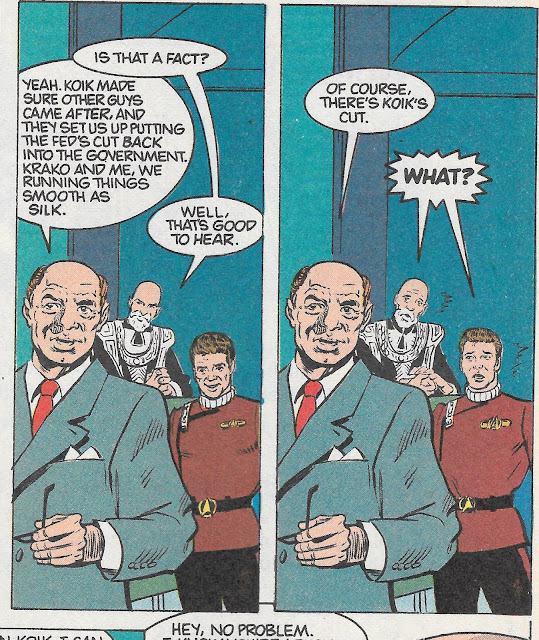 …Bela skewers him. Ladies and Gentlemen, Kirk's piece of the action…

…and that's not all! 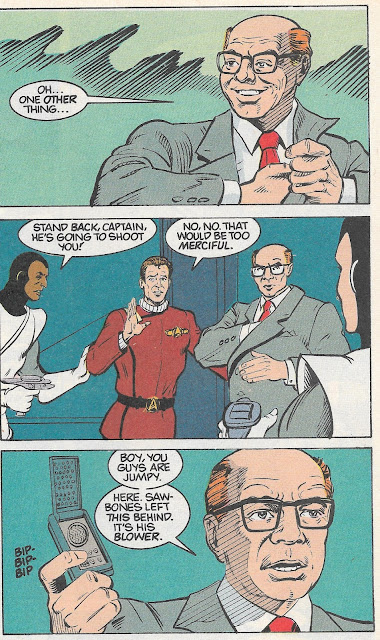 Well it's nice to know that little tidbit from the end of the episode isn't still a potential problem. If you don't remember why, go back and see it.

Next up is someone I didn't recognize. 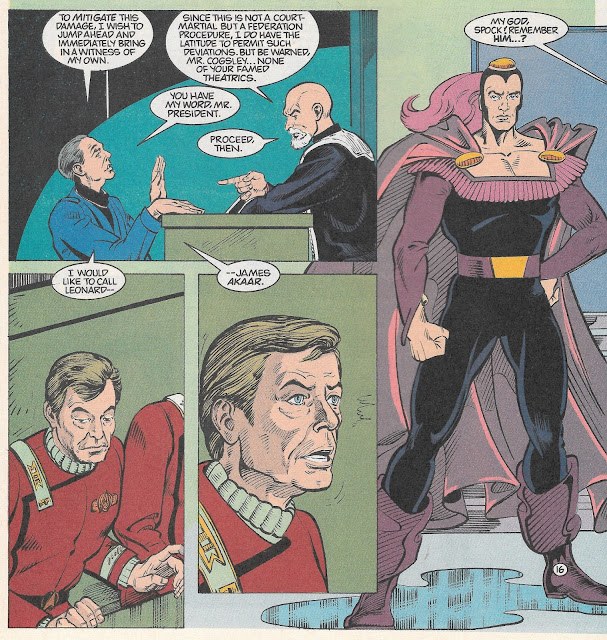 Meet Leonard James Akaar, The Teer of the Ten Tribes and ruler of planet Capella IV from the episode "Friday's Child." Perhaps I didn't recognize him because his only TOS appearance was as a newborn, a child whose birth as the son of the slain Teer leader only occurred because Kirk bent the rules while directly confronting the Klingon interference in the planet's political struggle for their own gain. Or perhaps I don't recall it because Julie Newmar also factored heavily into that episode. She is a bit distracting.

Anyway, Akaar is VERY glad Kirk intervened to save him. He pins the Klingon ambassador's cape to the wall with a handful of pencils and then has a nice face down when The Salla considers questioning him. 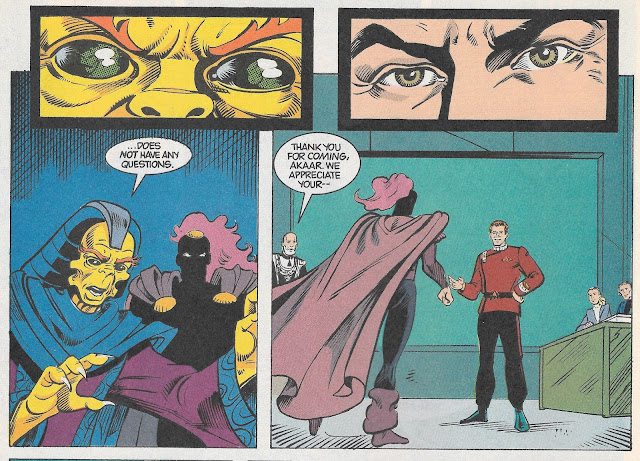 I could go on and on about this book, but I think I'll leave it where David does: teasing an appearance in the next issue by the Klingon Emperor. 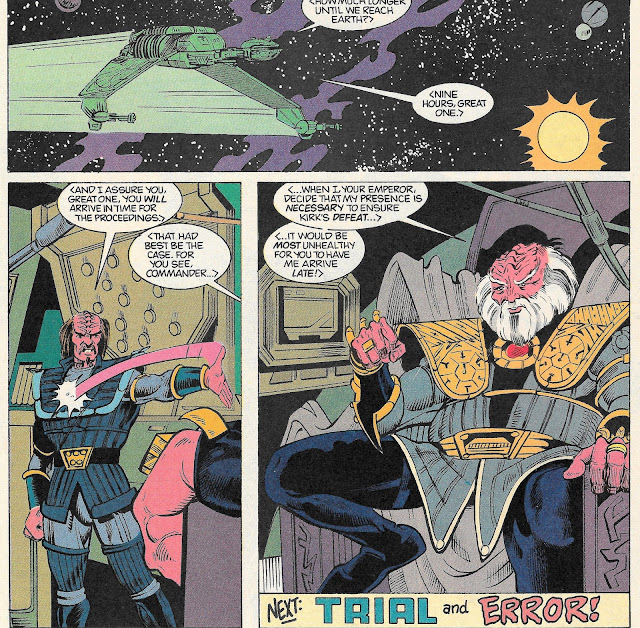 DC's Star Trek, vol. 2 ended in February of 1996, getting a good seven year run. David lasted the first fifteen issues and then did a few one shots. The majority of the run was Howard Weistein and were decent to good. Still more than a year's worth of Peter David issues is a great thing and fans of TOS should definitely seek them out.

Posted by SonOfCthulhu at 3:11 AM