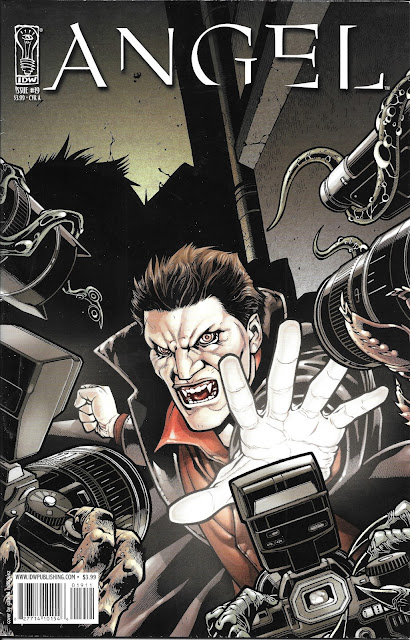 Beyond Buffy and into a fandom I have no clue about

There, I said it.

I’ve never watched Buffy, The Vampire Slayer. Not to the extent that a nerd is supposed to, given the strength of its fandoms. I’ve tried numerous times. I’ve owned the first season on DVD for years and I’ve watched a total of ONE episode from it. I believe she was even on Netflix for a bit and I kept going “I’ll get around to it..” and never did, now she’s gone.

I did catch the silent episode where no one talked and thought it was fantastic, even if there were undoubtably in-jokes that flew over my head. Missed the musical episode, though. Dang it!

As for Angel, her off again-on again-off again romantic interest, he was even farther off my radar. And Angel got his own TV series. That means that in addition to the seven seasons of Buffy I would have to get through, there were five additional seasons of Angel to make it past. I’m not certain I have the time before the end of September to do all of that.

In accordance with the above, this review will be a fairly uninformed one. Did I ever see an episode of Angel? Yes, and it looked like the goofiest TV show that I’ve yet to encounter. It had actors in demon-head makeup and three-piece suits sitting around boardroom tables talking about … I really don’t know because the visuals were just so jarring I couldn’t pay attention.

I’m going to go with “the Buffy universe is very odd” and leave it at that.

This issue, occurring right after Joss Whedon got into the comic universe version of Angel and “fixed” things to put them back on track, was actually a decent story that made sense even without knowing the copious backstory that these characters must have. The dialogue is written well, the plot easy to follow and the art clear and understandable.

We jump right into this one with a naked woman trying to stake our favorite hunky-man vampire Angel while he’s asleep. 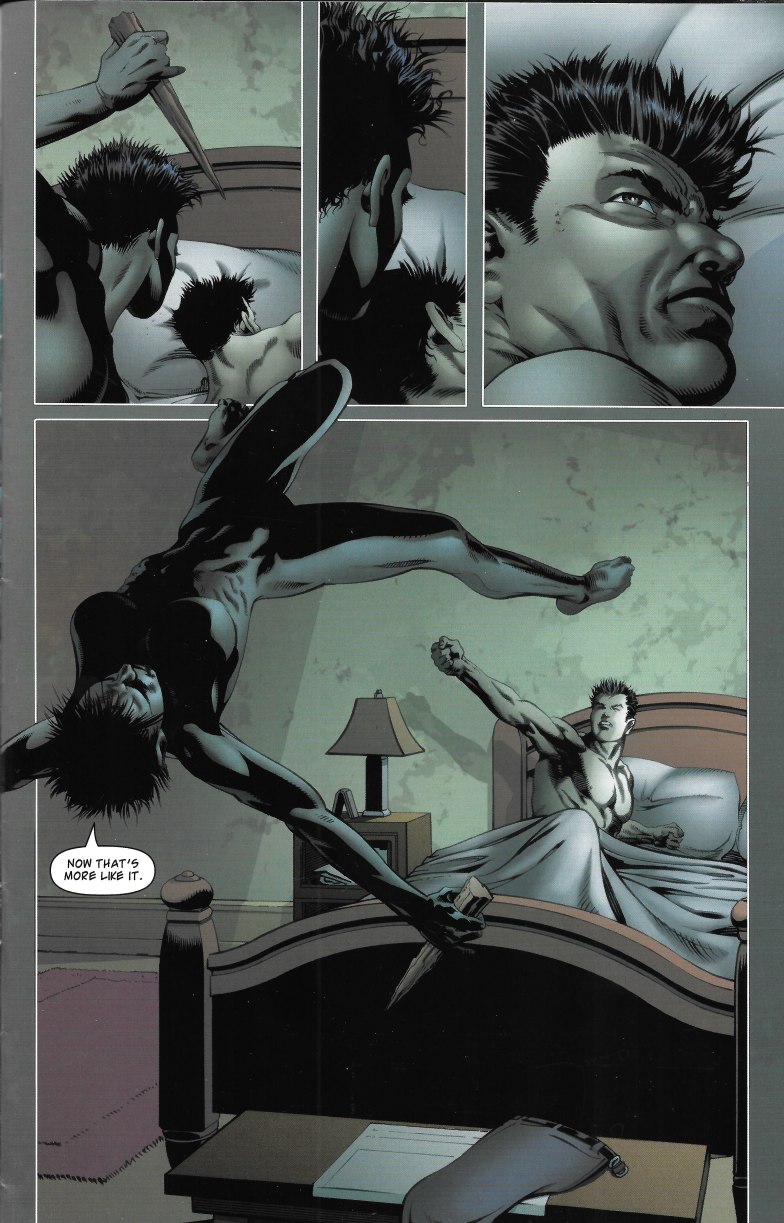 Make that “while he looks like he’s asleep”. Seems our assassin has a tougher job in store for them than they expected. Angel’s made many Demon Lords mad at him according to his inner monologue and this isn’t their first attempt to kill him. Some part of me worries we are going to get into goofy demons wearing suits, but right now the book isn’t going down those roads.

Where it is going is this fight with a skivvies-wearing Angel facing a naked hottie who jumps around the room like a cat. After a bit the old banter… 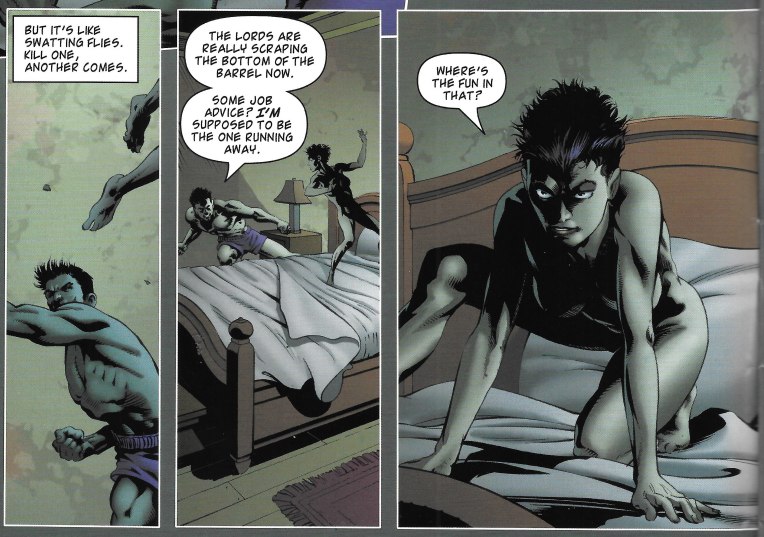 …and a bit more banter… 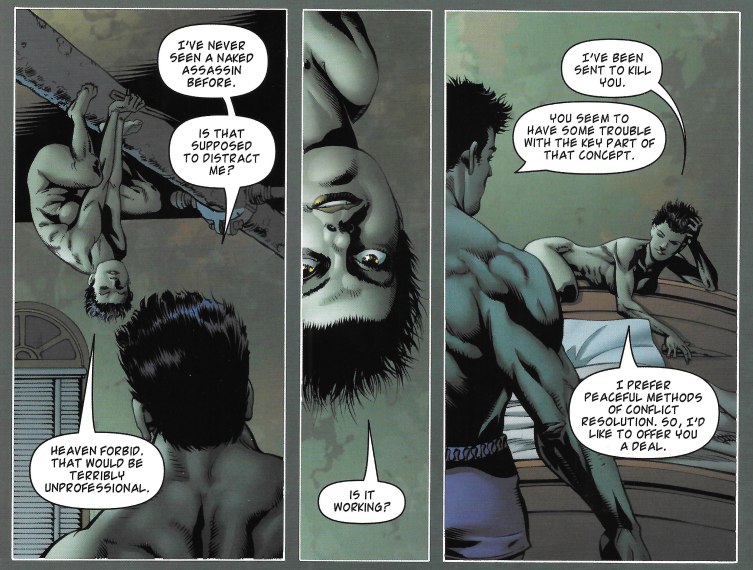 …we get down to the girl making Angel an offer to save them both a bunch of trouble.

Seems the young lady owes a debt to one of the Demon Lords and instead of giving him Angel’s head, she’d like Angel to help her take him out. But if she can’t lay a finger on Angel, why should he help… 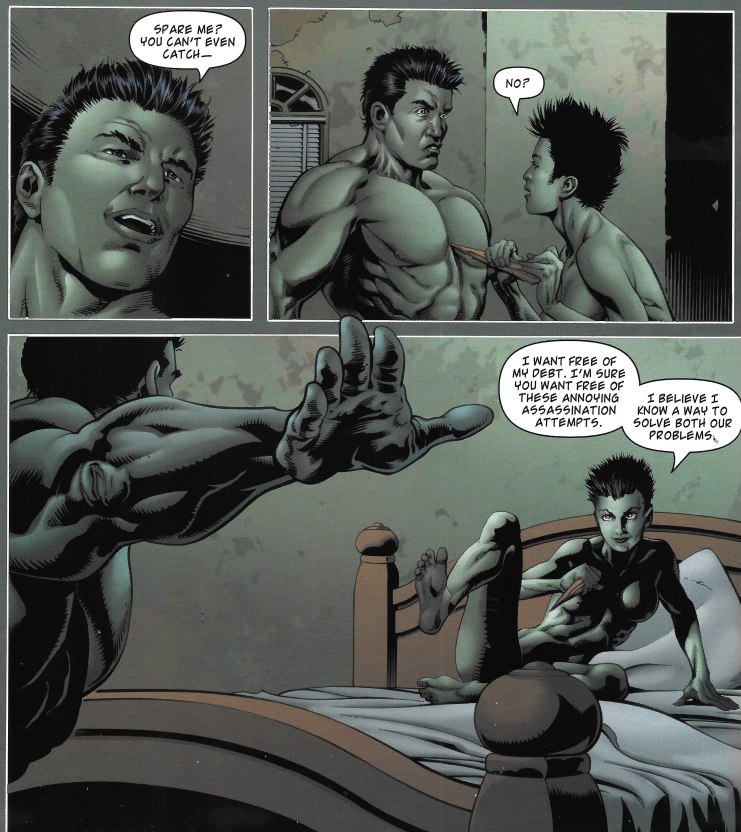 …ulp! Okay, so she’s been fooling around this whole time.

Meanwhile two of Ange’s cohorts are running down a crazed rat-eating woman at some other part in the city. Sort of like demon-vampire-busters or some such. Really don’t ask me why, I didn’t watch the series remember. What I do know is after she ducks into an abandoned building, the pair follow only to be confronted by some major heavies. 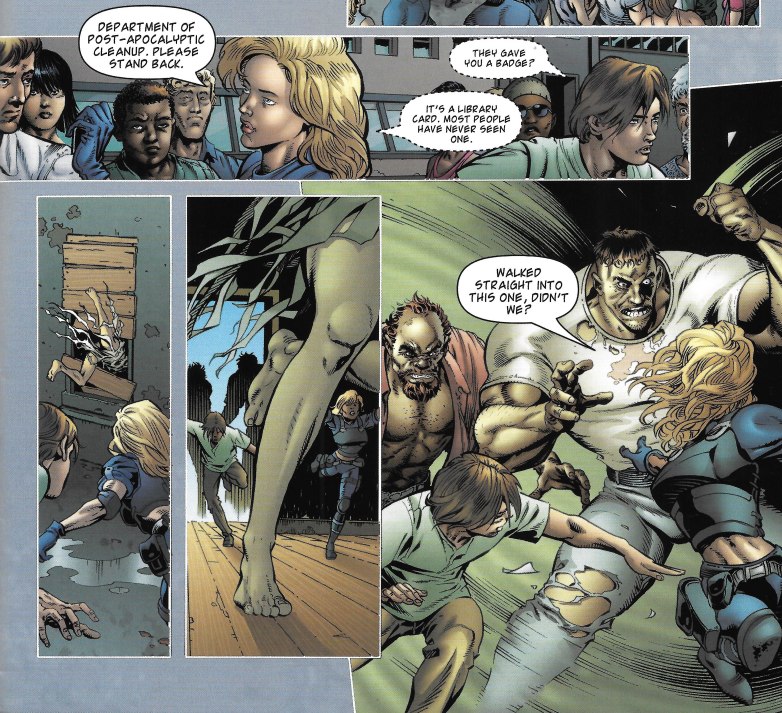 That library card bit is kind of cute.

Anyhoo, they do some karate demon-butt kicking until the male character gets grabbed by the head, and then this magical girl named Gwen steps in from out of frame and saves his ass. 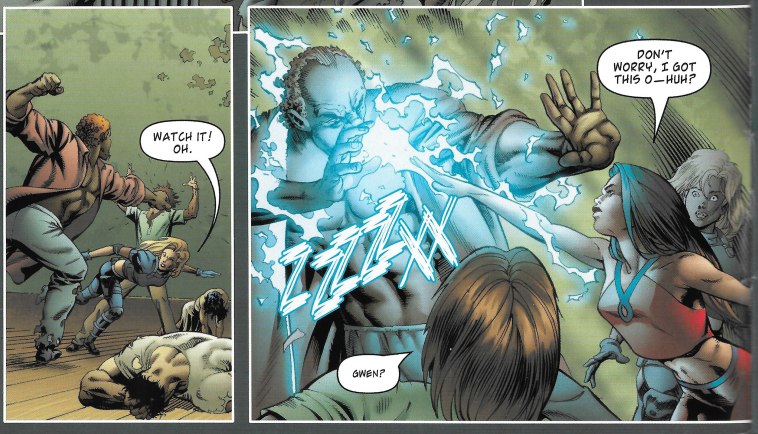 Which of course makes him mad because of some past I’m not looking up where they were in Hell or something and I’m sure betrayal and heart break and whatever happened. Because she helped out, the blonde asks her to stay, however. 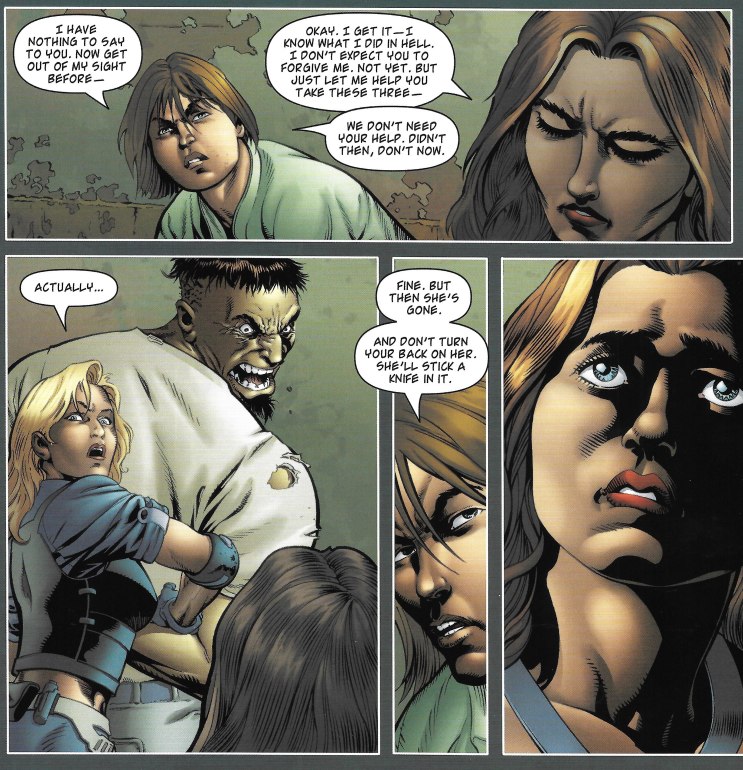 They make it back to see Angel and his new pal “Desdemona,” who ends up going to “change” out of Angel’s shirt while the four regular cast members discuss how much they don’t trust her. She returns slightly different than when she left… 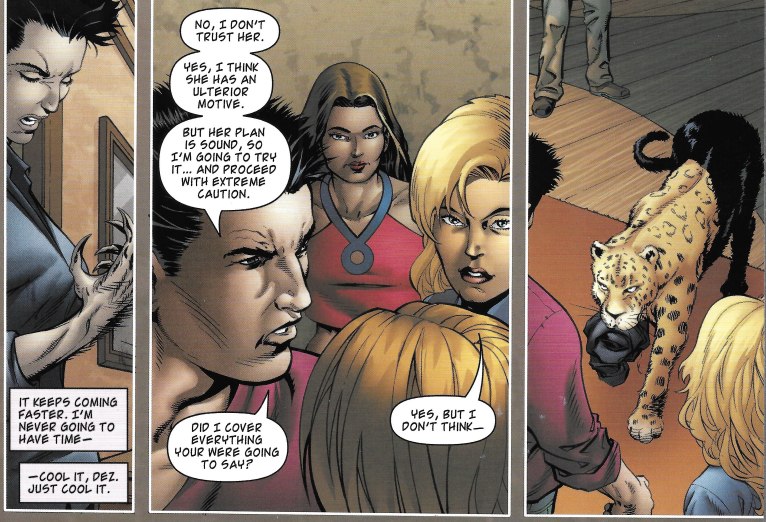 …oh-kaaay! So the giant spotted leopard drops the clothes and picks up a sword that I can only assume is +2 against demon slaying and heads out the door.

The others bicker about Gwen back and forth before assigning her the duty of looking up just what exactly Desdemona is from their library of D&D monster manuals. I’m betting on rakshasa.

While Gwen looks we get this neat little interlude of Angel and Desdemona crawling through the Demon Lord’s air ducts. 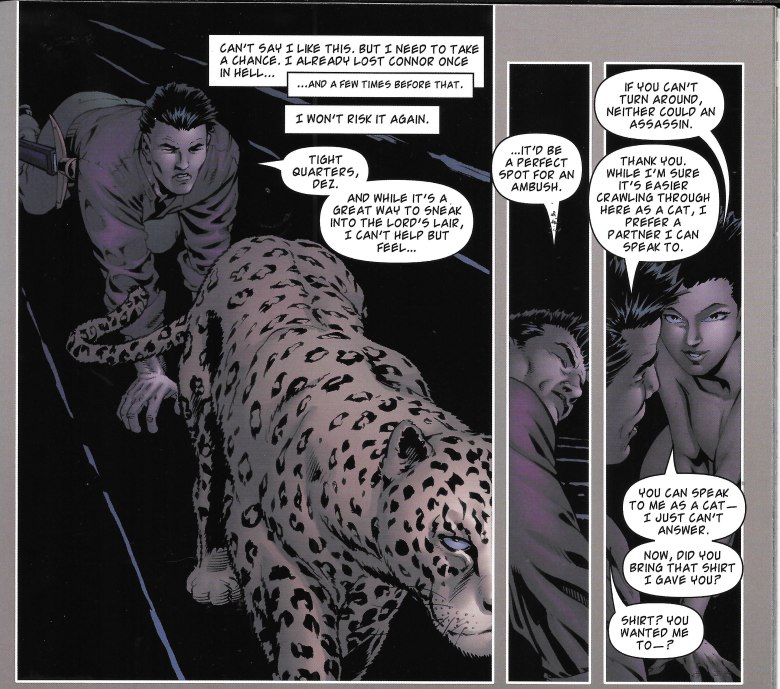 Unfortunately, Angel did not bring the shirt.

Dez says it doesn’t matter and that it usually works better this way. She then distracts the Demon Lord while also letting him know that his doom is sealed. 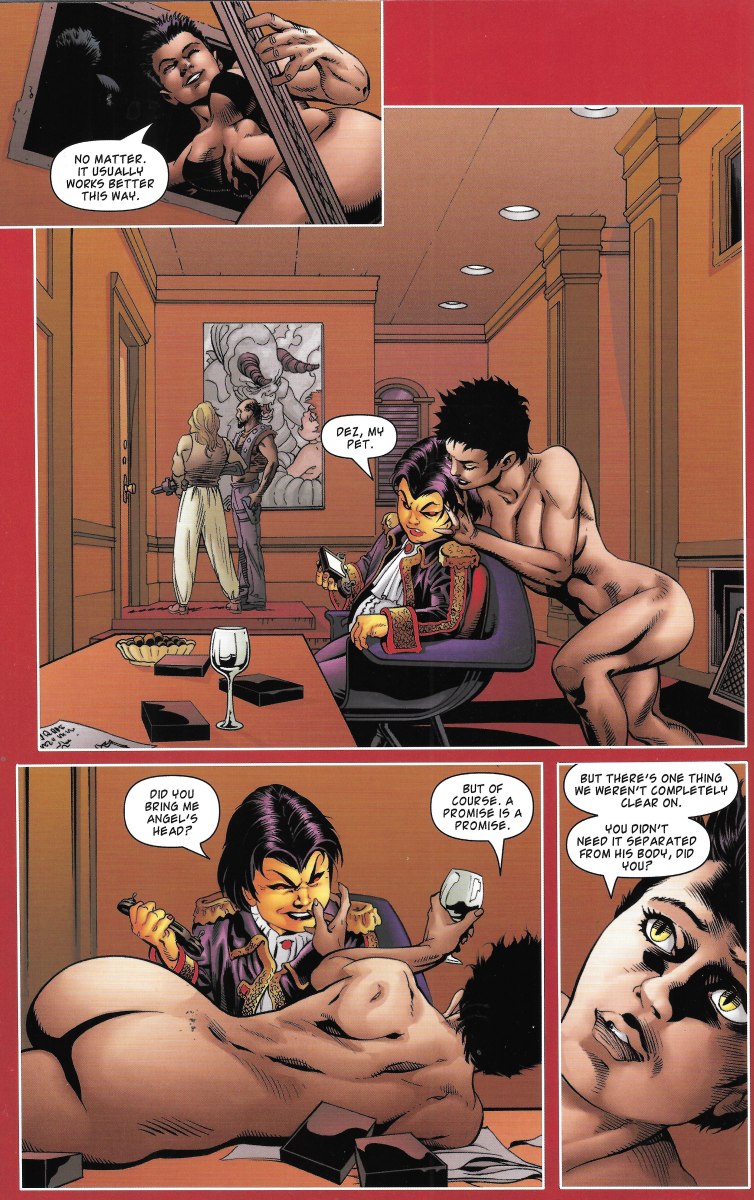 And she allows Angel to fight off the guards (without killing them), while she does away with their boss…casually dropping hints that she is doing so while in the employ of another Demon Lord. 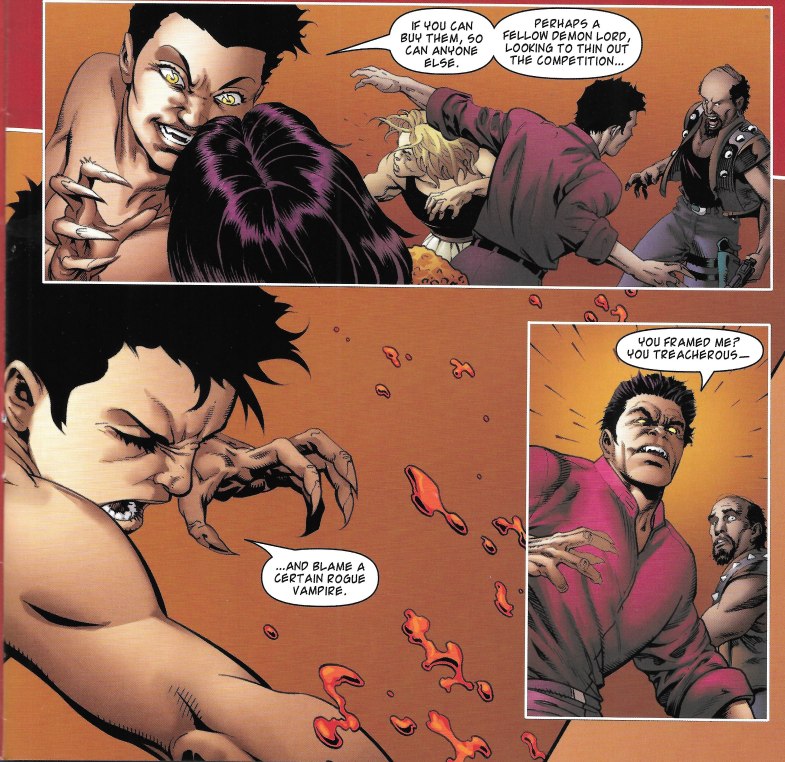 As the guards scatter, Angel plays out his part by attacking Dez, a ploy that will ensure the hirelings start a war between the Demon Lords to determine who paid for Dez to off this particular leader. It’s kind of a smart setup here. 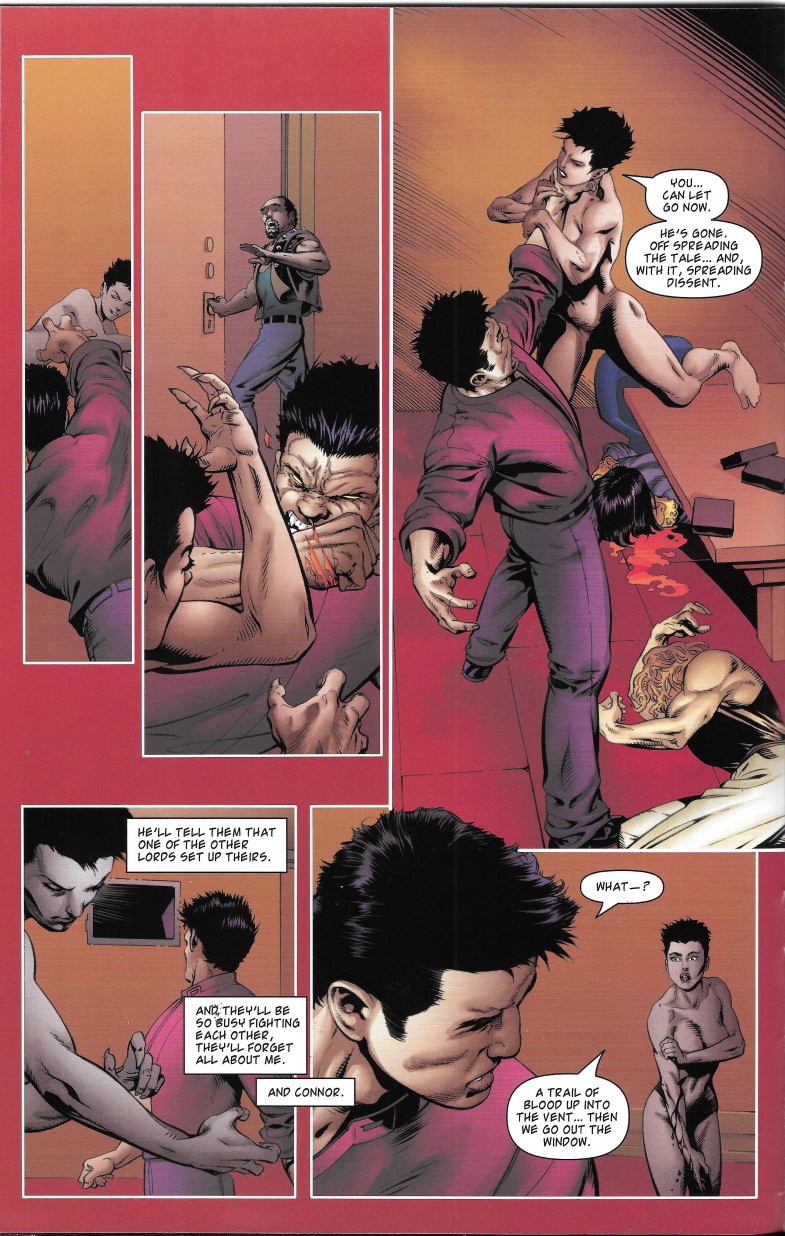 Angel leaves the compound and bumps into his junior squad on the way in to help. He escorts them back to their base while fending off questions about where Dez is (he has no idea, they split up) and about how they are all dealing with the events of being in Hell (which I don’t have a clue about).

They get back and are all mean to Gwen, who’s been researching her little heart out. 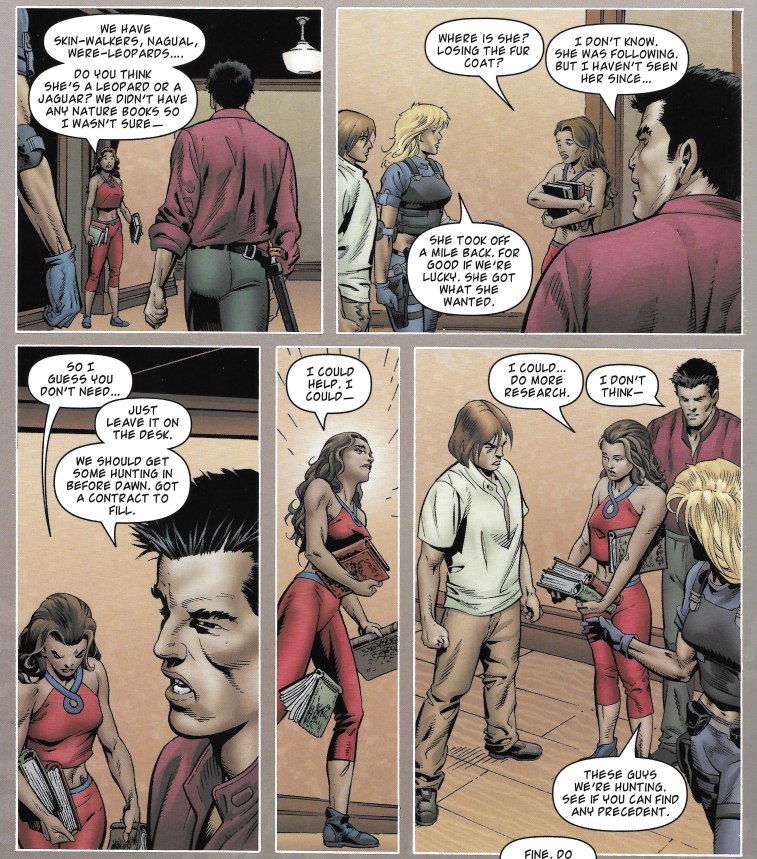 Meanwhile, Dez appears to be trying to score some clothes from this homeless person. I like the art here, especially the top right picture of the leopard. 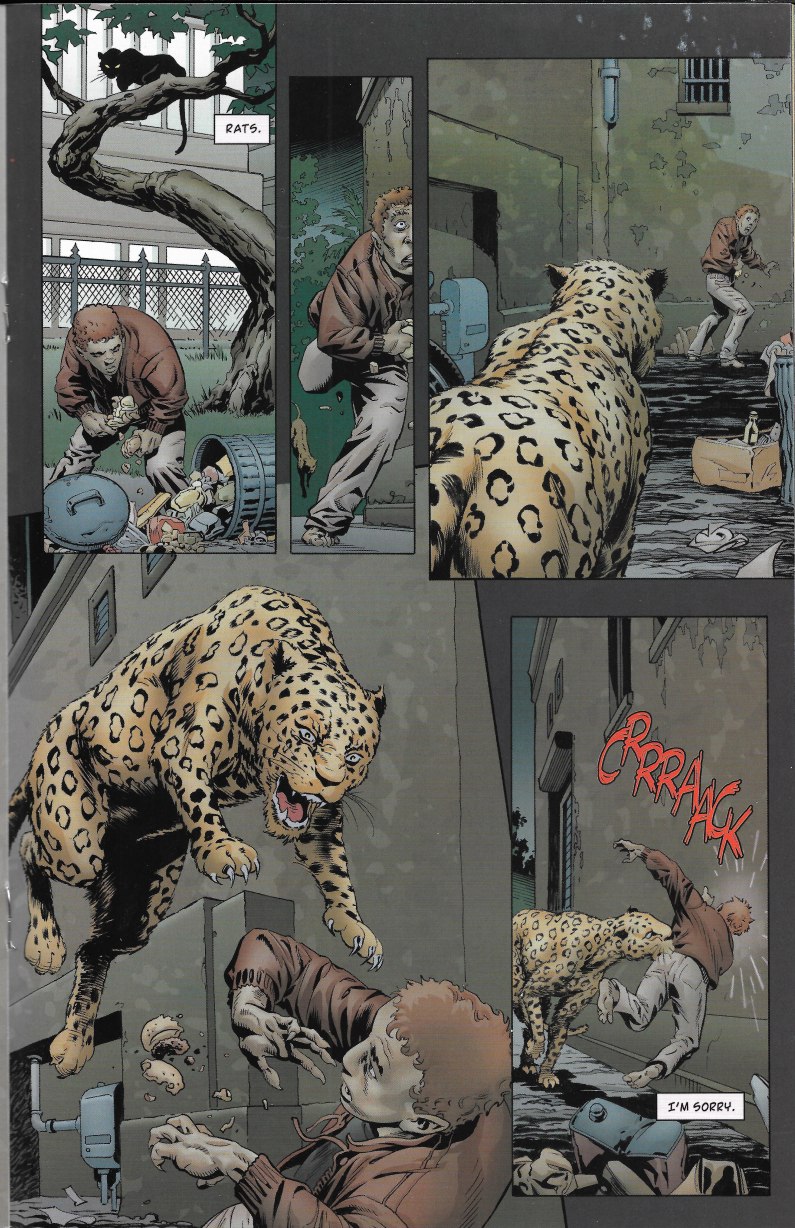 She shape-shifts back to human form and steals his clothes. I figure she eats the guy too, but no. Instead she heads back to Angel’s compound for an unexpected run in with the trio and Gwen. 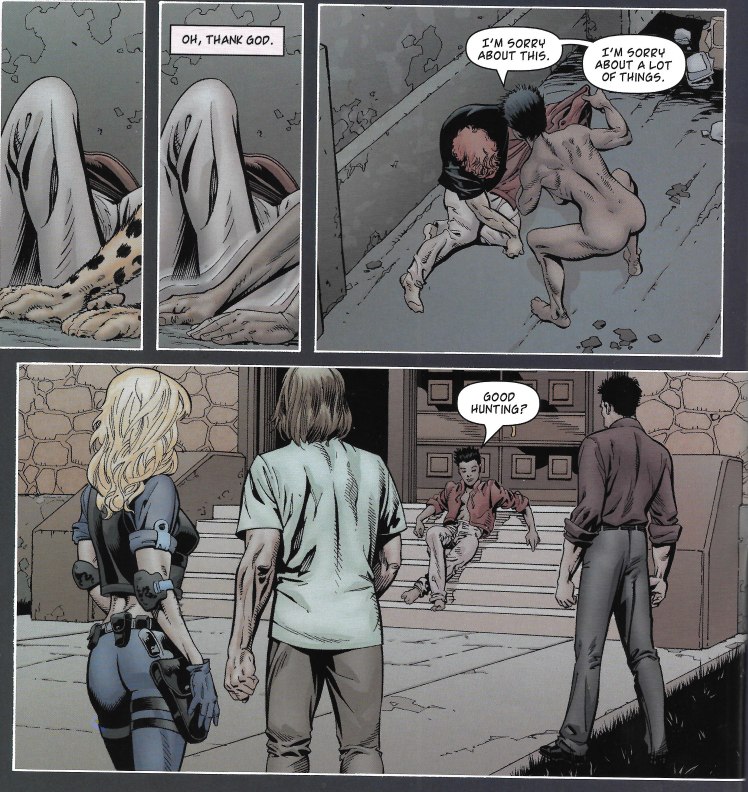 She delivers the guy to Angel, although who he is and why Angel wants him isn’t brought up. What is brought up is WHAT exactly Dez is becomes a topic of conversation. 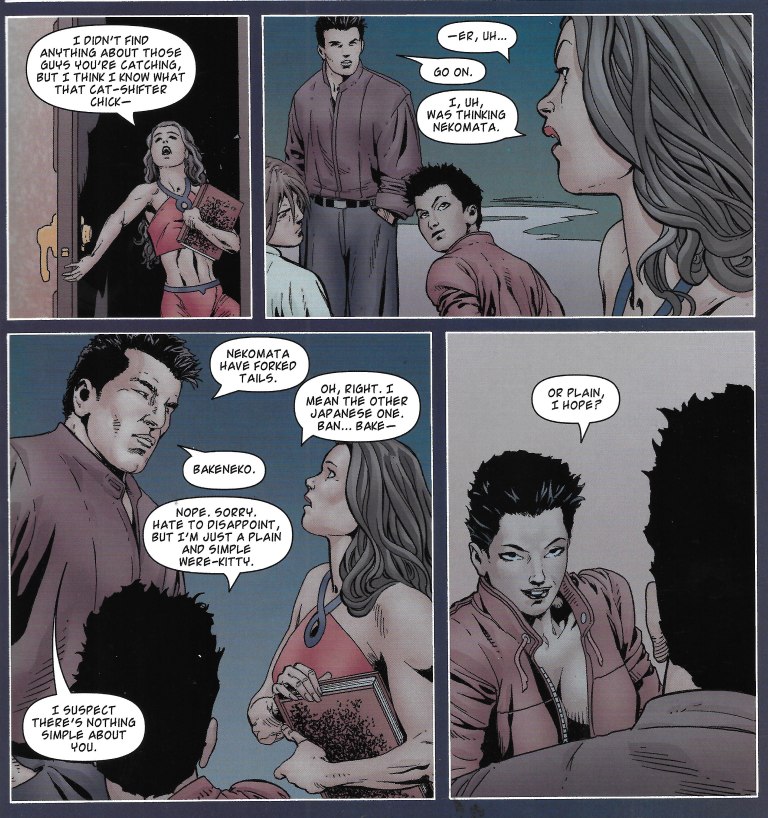 Dang it! I guessed wrong too. 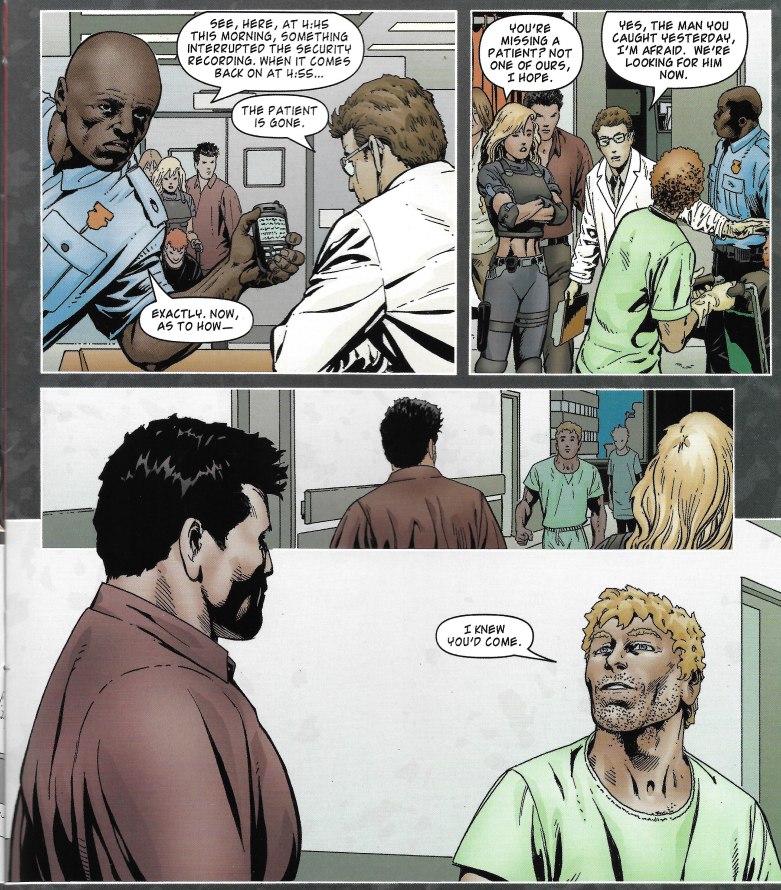 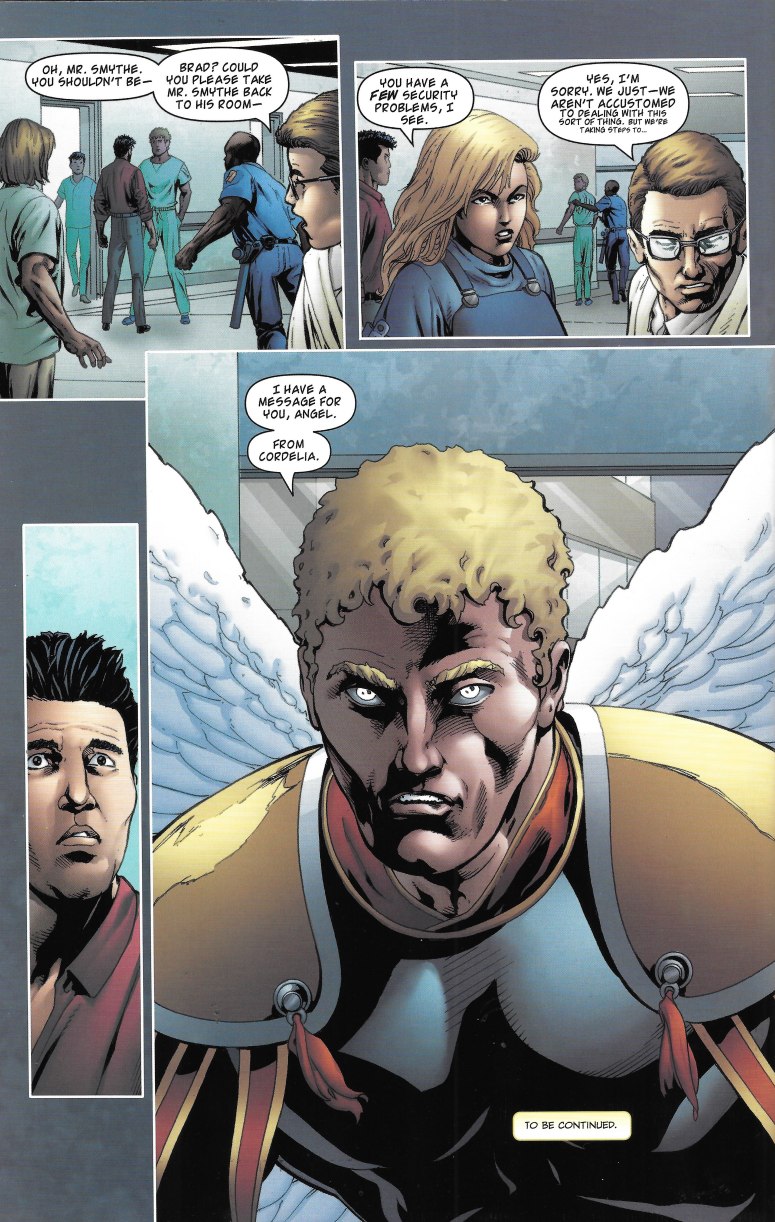 And if this standoff isn’t kind of eerie, what the chap says to Angel certainly is. As well as the fact that this guy appears to be an “actual” angel.

Well, crumb. This was a pretty decent story that I would love to follow up on. I’m not sure if it is the comic book format or what, but everything about this book works for me. The cast is intriguing and the plot fun and shows to be linked to a larger ongoing narrative that I would like to explore. This was a good pick up.

Now I just have to find about three months to get up to speed so I understand it better.
Posted by SonOfCthulhu at 4:21 AM