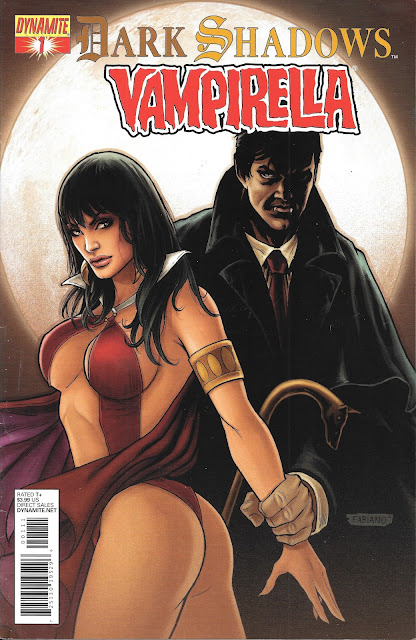 There are many things in this world I don’t completely understand.

How they get those ship models built inside those bottles, for one thing. Why they do it, for another.

But the most inexplicable thing I’ve found out through all my Crapbox blogging is the popularity of certain fandoms. M.A.S.K. for one. ROM for another.

Last year I posted my review of Dark Shadows #1 from Innovation on a Monday in October. By the end of the week that post had close to 200 views. By the end of the month, it was a few posts away from a Keith Giffen Superman book for most views. Even now it sits there closing in on six hundred views almost a year later.

And it’s not even that well written a piece. I think I even bailed out before the issue was over because I found the book a little on the …slow side.

People certainly must love that old gothic soap opera, is all I’m saying. I tried a few last year and it did nothing for me. Lots of atmosphere, but it was definitely a slow burn to getting to ANY resolution. I found it dull.

I did pick up the Johnny Depp/Tim Burton disasterpiece on blu-ray when I was at Walmart though. I figured at $5, I could pair it up with a nice box of red wine and make a go of an enjoyable evening. One way or another. I’ll report back findings on that later.

For now, however, I have the PLEASURE of presenting a Dark Shadows book that I would look forward to seeing more of: 2012’s pairing of the scantily clad, sometimes space alien vampire-sometimes devil spawned vampire, vampire hunter Vampirella with the always regretful and hungry Barnabas Collins. It seems like a match made for about 20 seconds, as Vampirella is apt to stake first and ask questions later.

The neat thing about this issue is that it knows the wise use of a cliffhanger and it presents a plot that gives the reader clear expectations of the conflicts it sets up. And that looks to be a team-up of necessity as …well, I’m going to stop here as I’m getting ahead of myself. Let’s dive in, instead, shall we?

We begin in (get this) 1410 Slovakia, where two guards arrive at the cell door of an accused murderess to find… 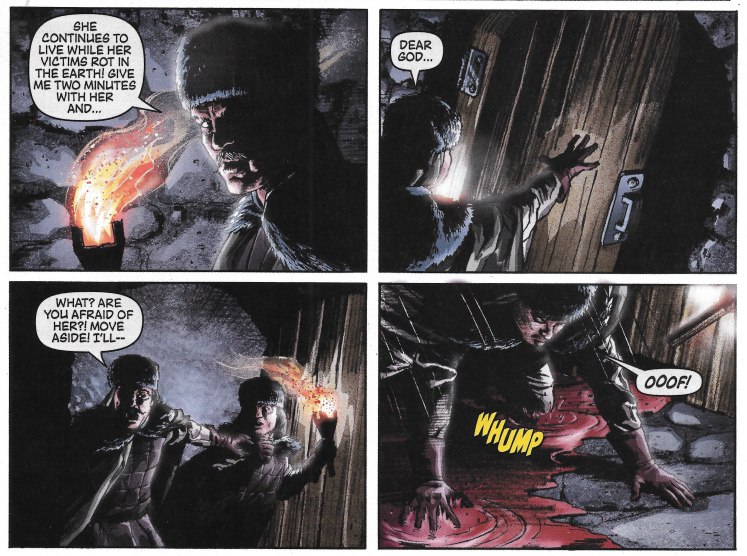 …Ahhh! Streams of blood. That can’t be a good sign. 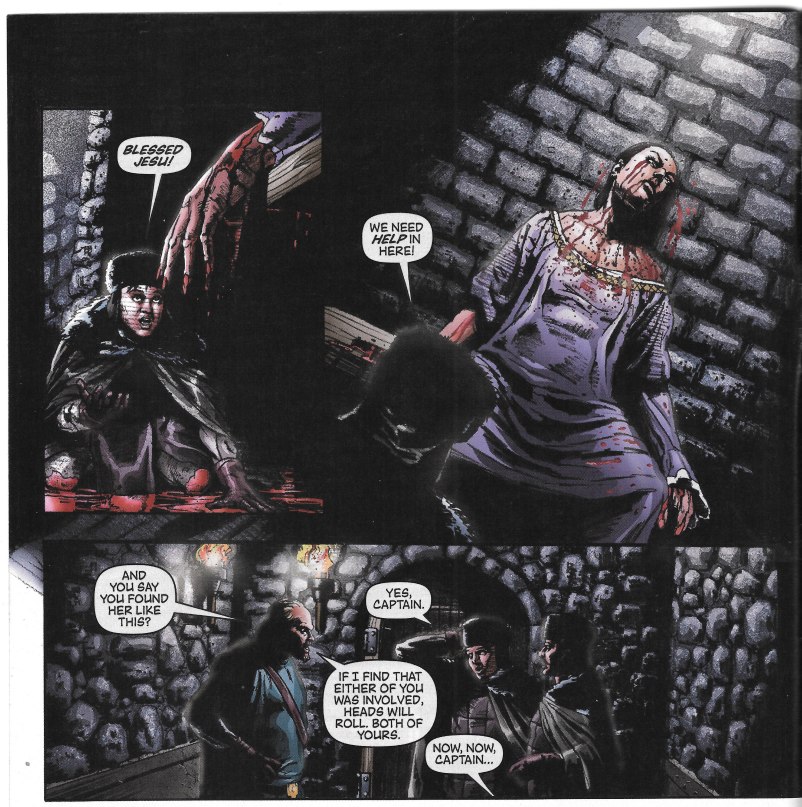 And indeed, it isn’t. The woman in question has had all the blood drained from her body mysteriously. Our two hapless guards are then ordered to deliver her bloodless corpse back to her family, three days ride from the castle. With a minimum of bitching, they undertake this fatal journey. 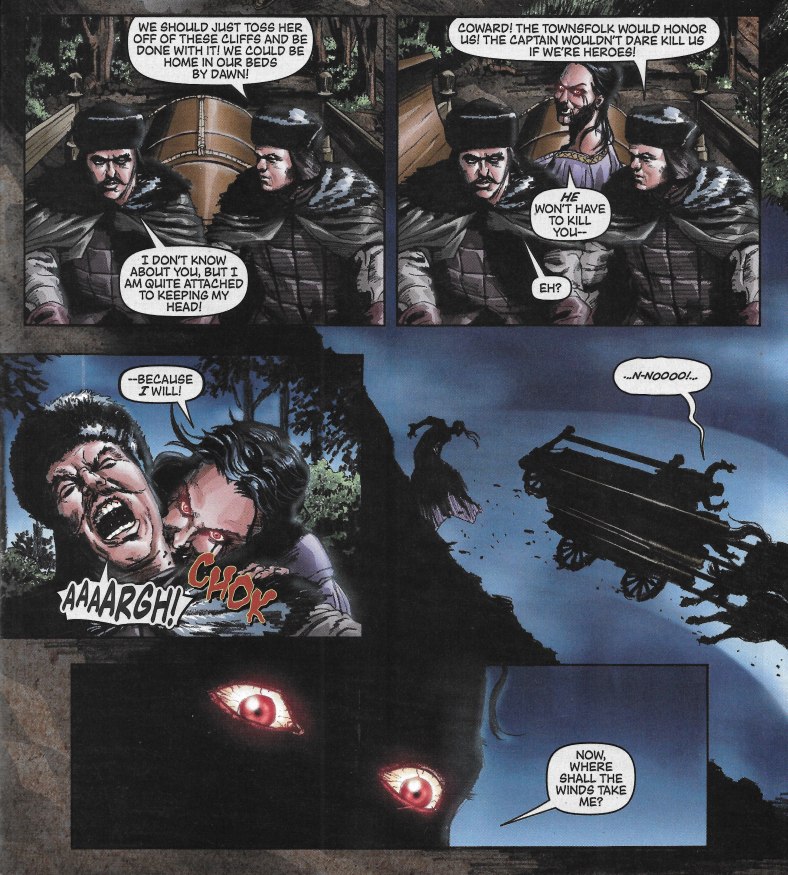 I did say “fatal” didn’t I? Because the woman is a vampire now and of course, she wakes on the road back feeling puckish. When having a bit “on the hoof,” so to speak causes the wagon to careen off the cliff, our newly minted vampiress feels the need to wander.

Skip ahead a few centuries to 1888’s Whitechapel, London…and if you can’t see where this will take us, you’ve missed your horror history quiz. Because as all the prostitutes know, you’ve got to be careful who you pick up these days…er, um…back in “those days”. 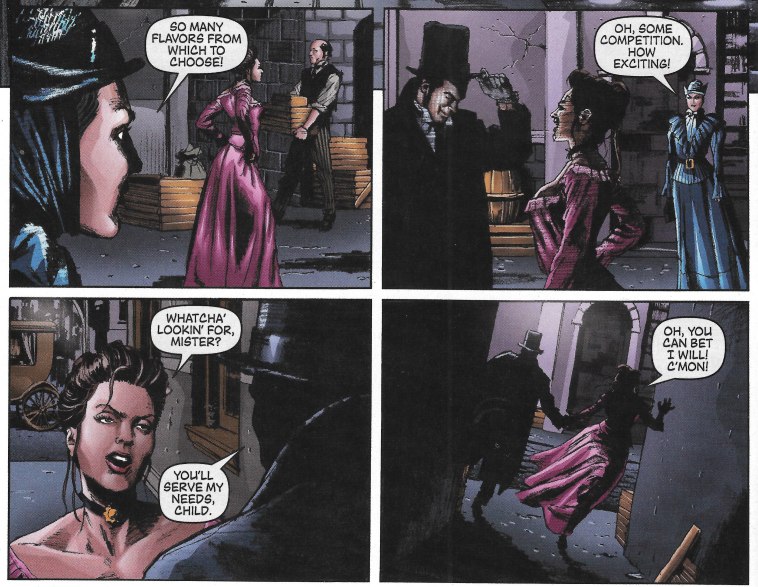 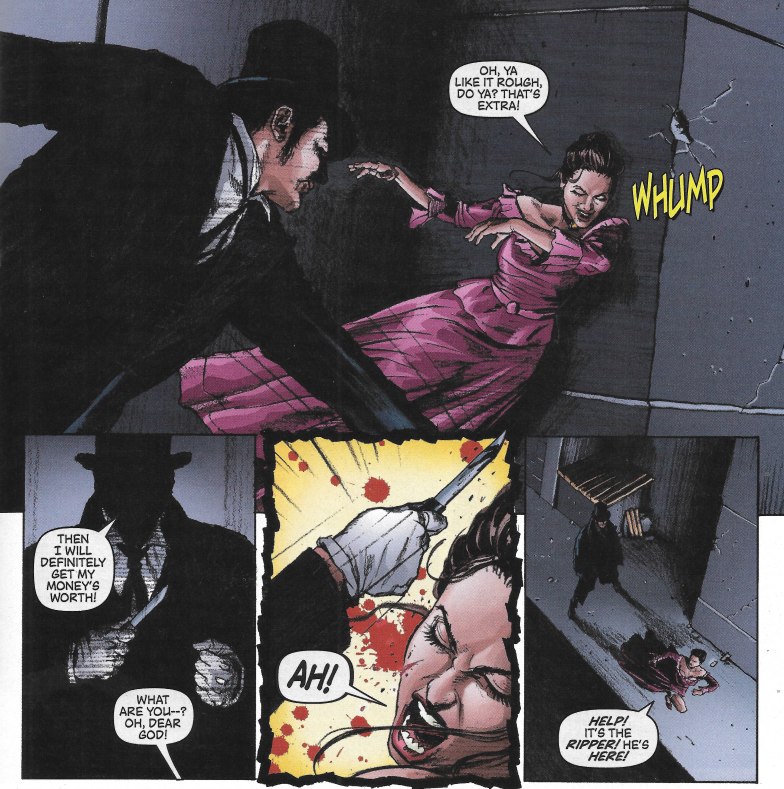 …only to end up being Gentleman Jack, the infamous Ripper. I may have mixed him up with an alcoholic beverage. Not too sure. What I am sure is this young lady has the worst sort of luck. From the frying pan into the fire, so to speak. 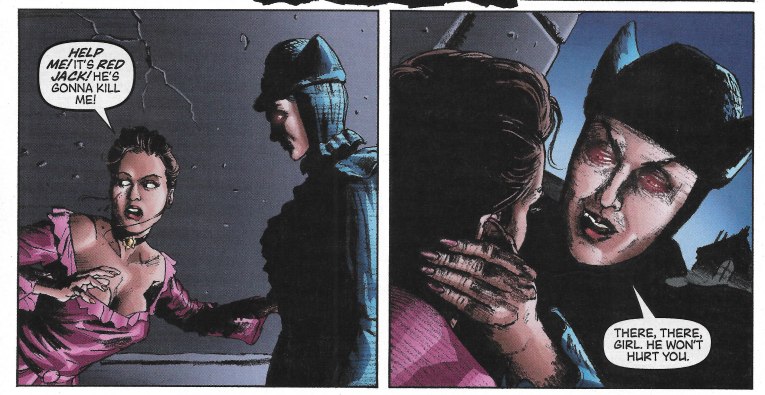 She won’t be the only victim this even, however, as the vampire lady from our prelude decides Jack the Ripper would make an excellent henchman. Looks like she Renfields him all up, too. 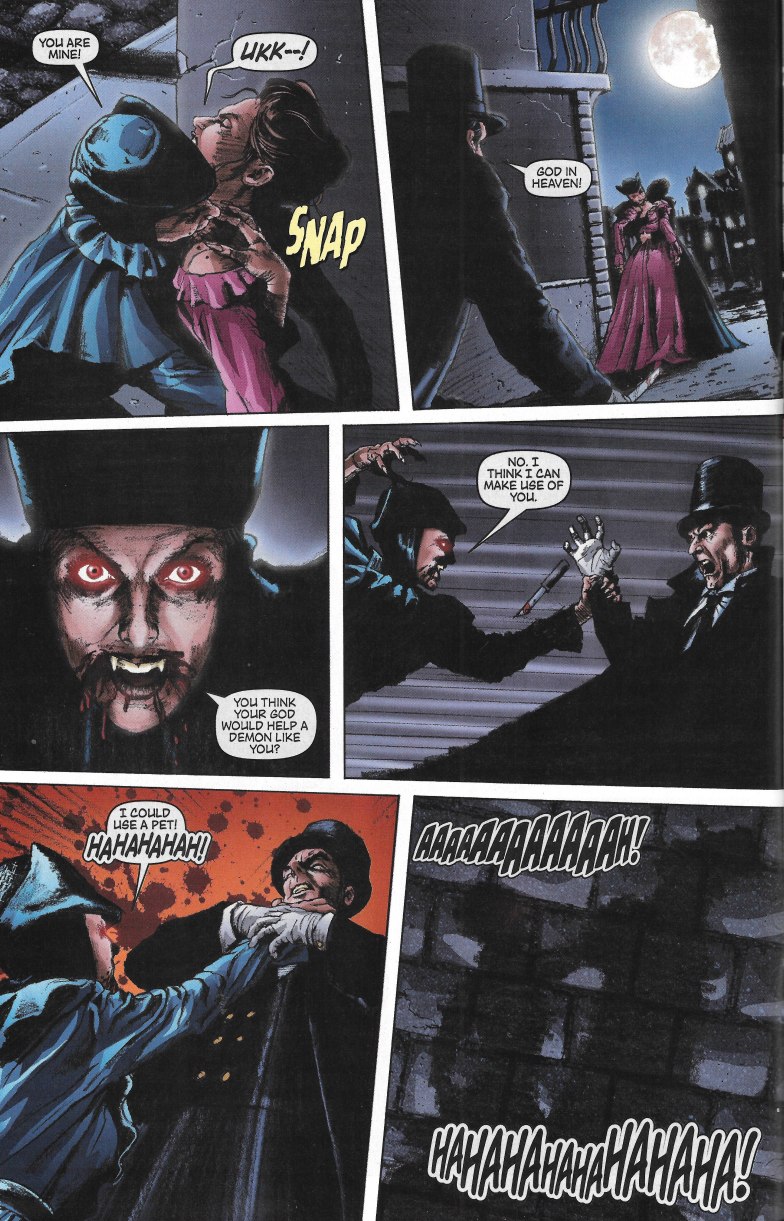 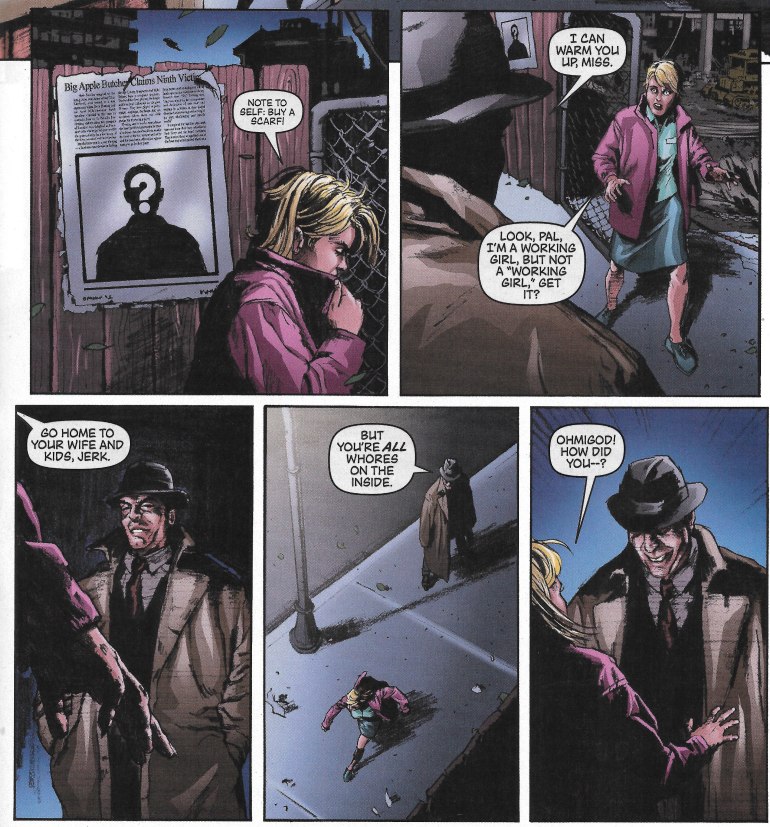 …well, waitresses is what she appears to be. Must be a fear of catching something from the prostitutes of our day and age. Either that or “the Mistress” wants the young lady for something more than just a lite snack. Only time will tell. 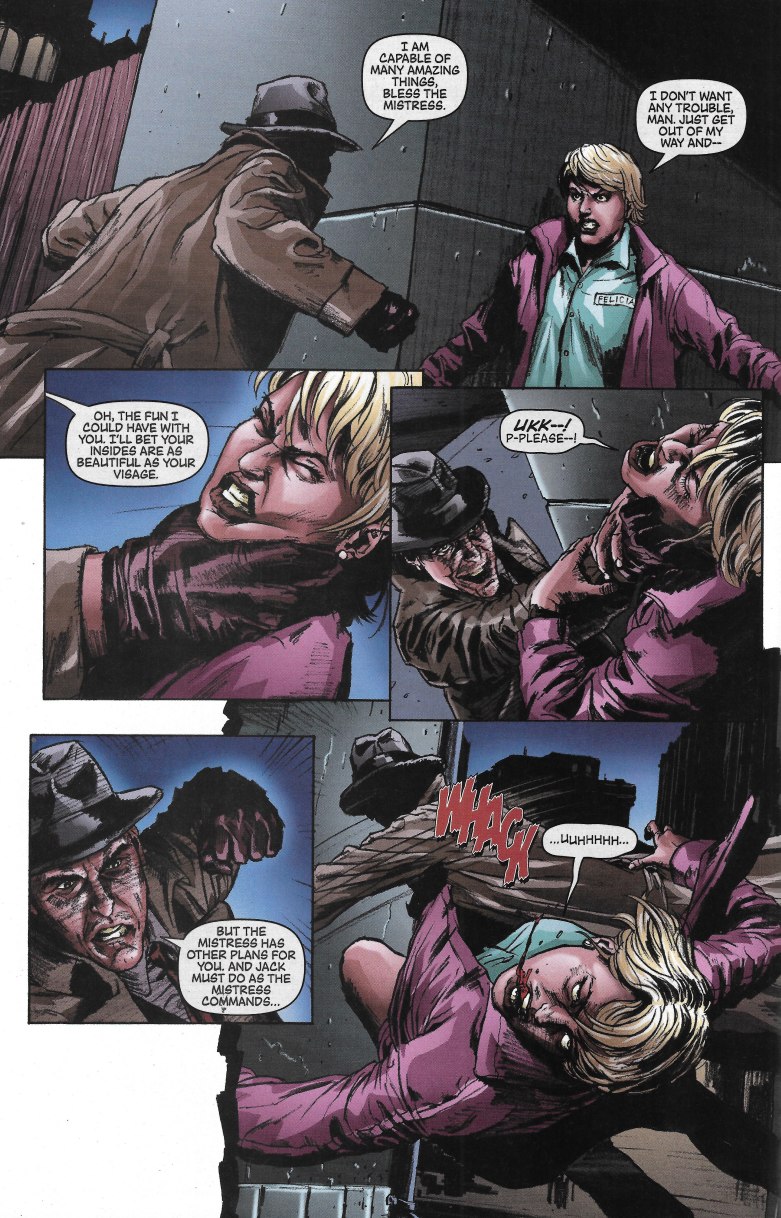 And in Collinsport, Maine, Quentin Collins picks up the newspaper to read about the abduction. Quentin is Barnabas’ descendant and the inheritor of the Collinwood Estate. He’s also a werewolf. 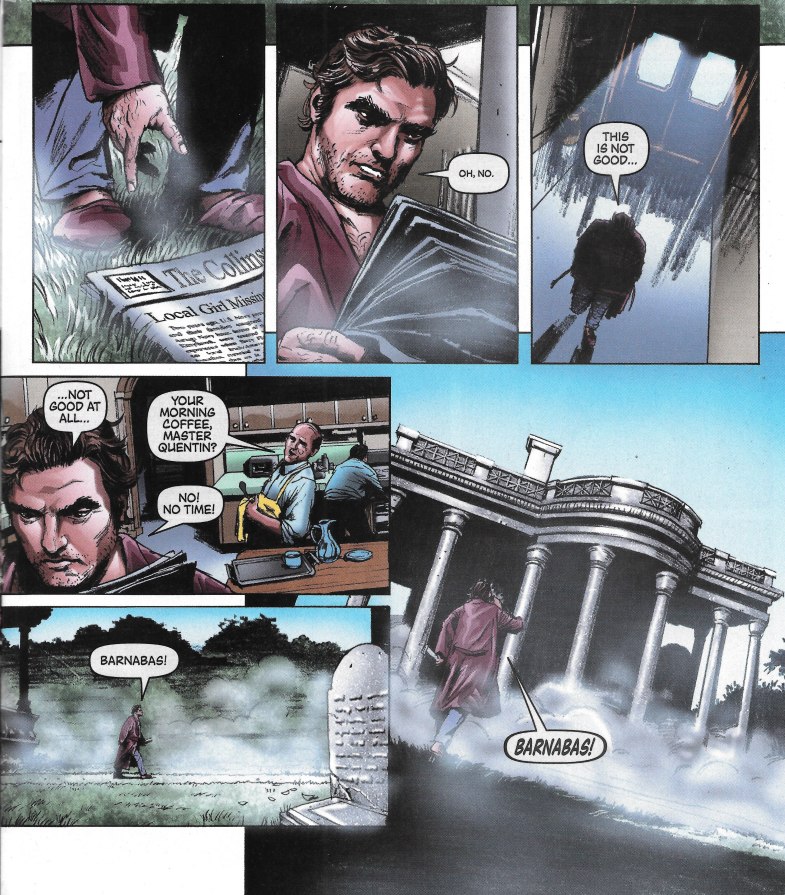 The picture of the woman in the paper is recognizable by both men instantly. She is the great, great,…(etc)…great granddaughter of a woman that Barnabas snacked on after he was first turned. See: 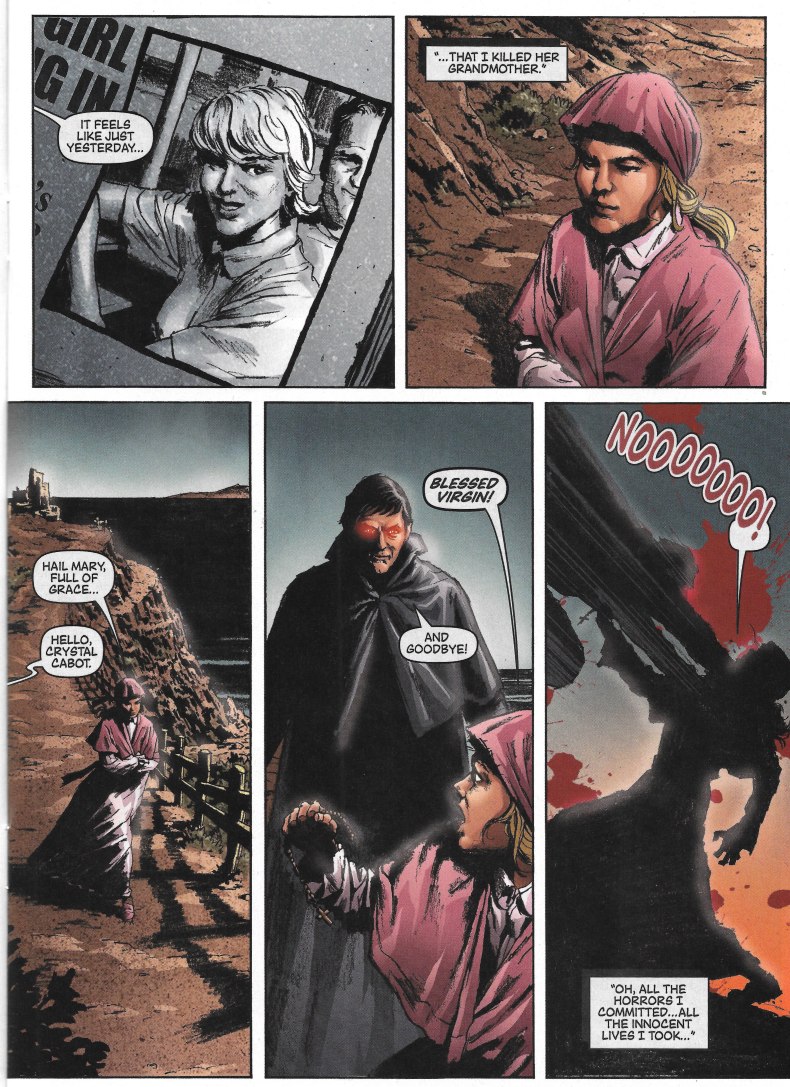 Because of that action, Barnabas swore to protect those individuals he wrongly murdered before he had full control of himself AND THEIR HEIRS for as long as he was/is (ahem, sort of) alive. 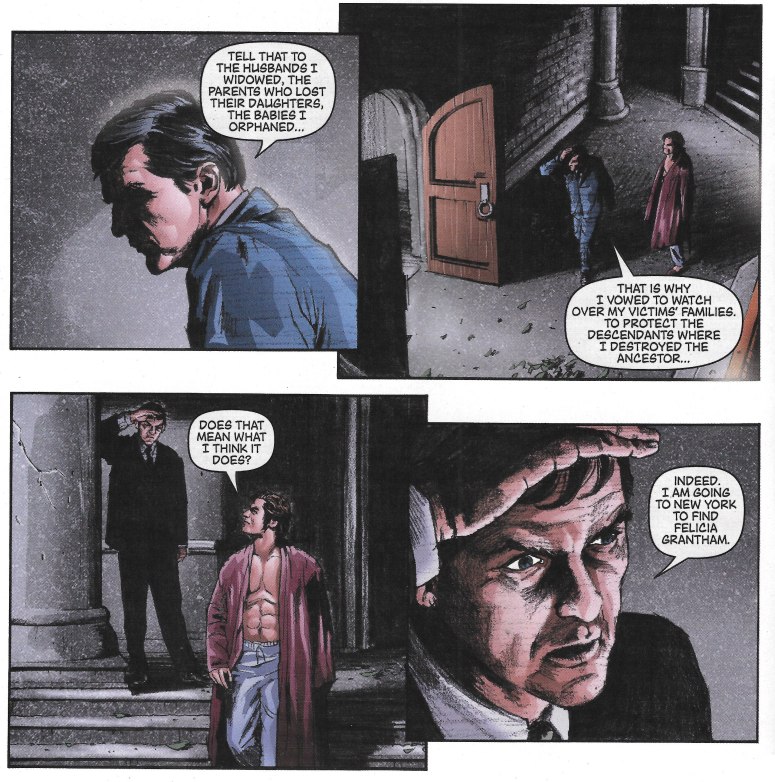 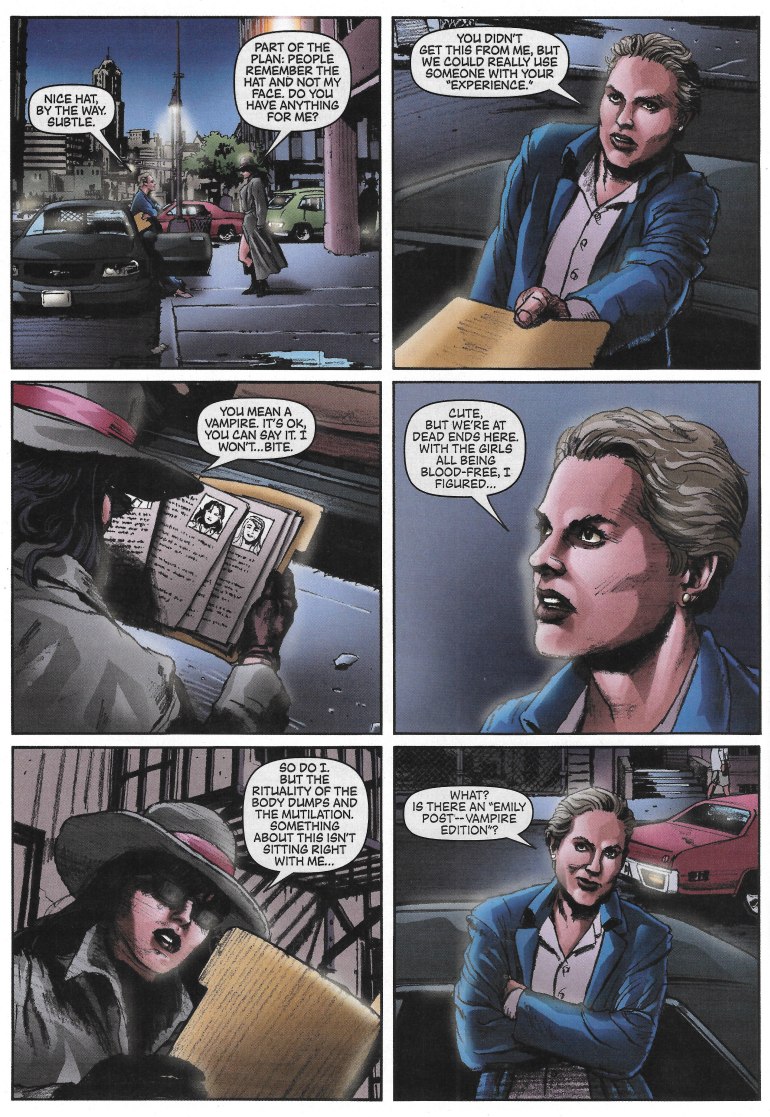 …but “V” is getting some hints from the file that this isn’t just any old vampire murders.

She’s right, of course. And given that time is of the essence, she drops her disguise and sets out to find the killer. 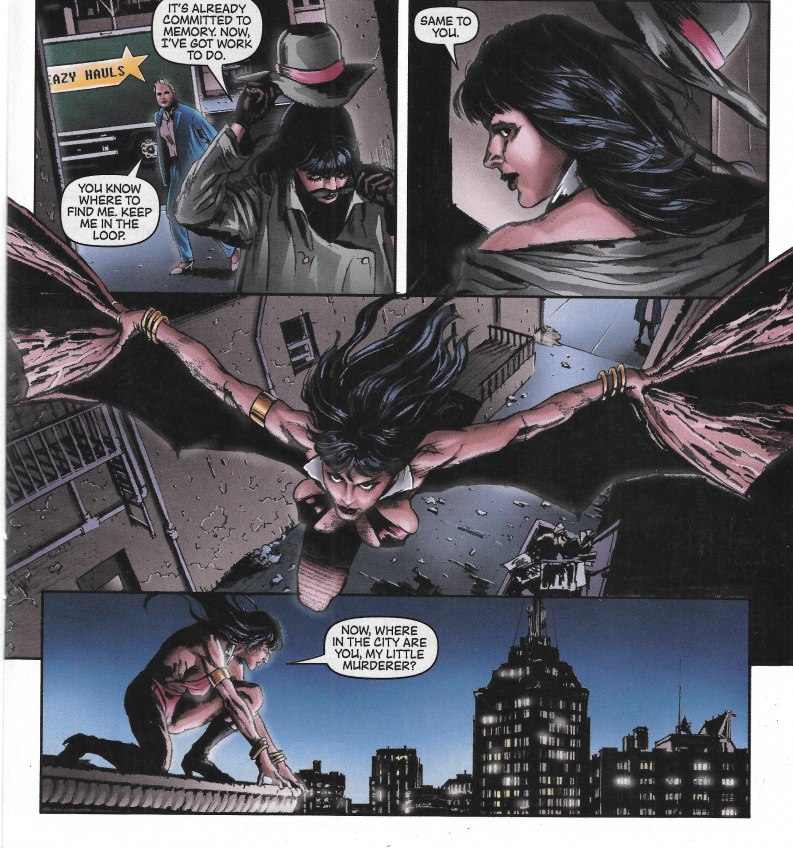 A path that will take on a collision course with these two. (love the “bad dog” reference here. Ha!) 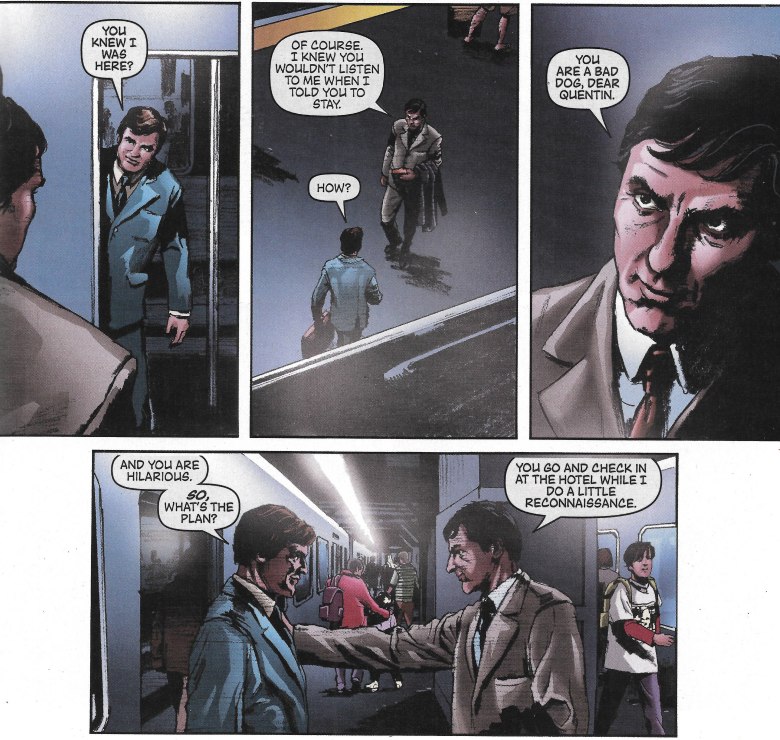 Because the first stop for both these hunters of vampires will be is Felicia’s apartment, a place Barnabas can only enter due to a very conveniently placed welcome mat. (Note to self, never buy a mat that says welcome as they are a “security risk vs vampire entry”.) 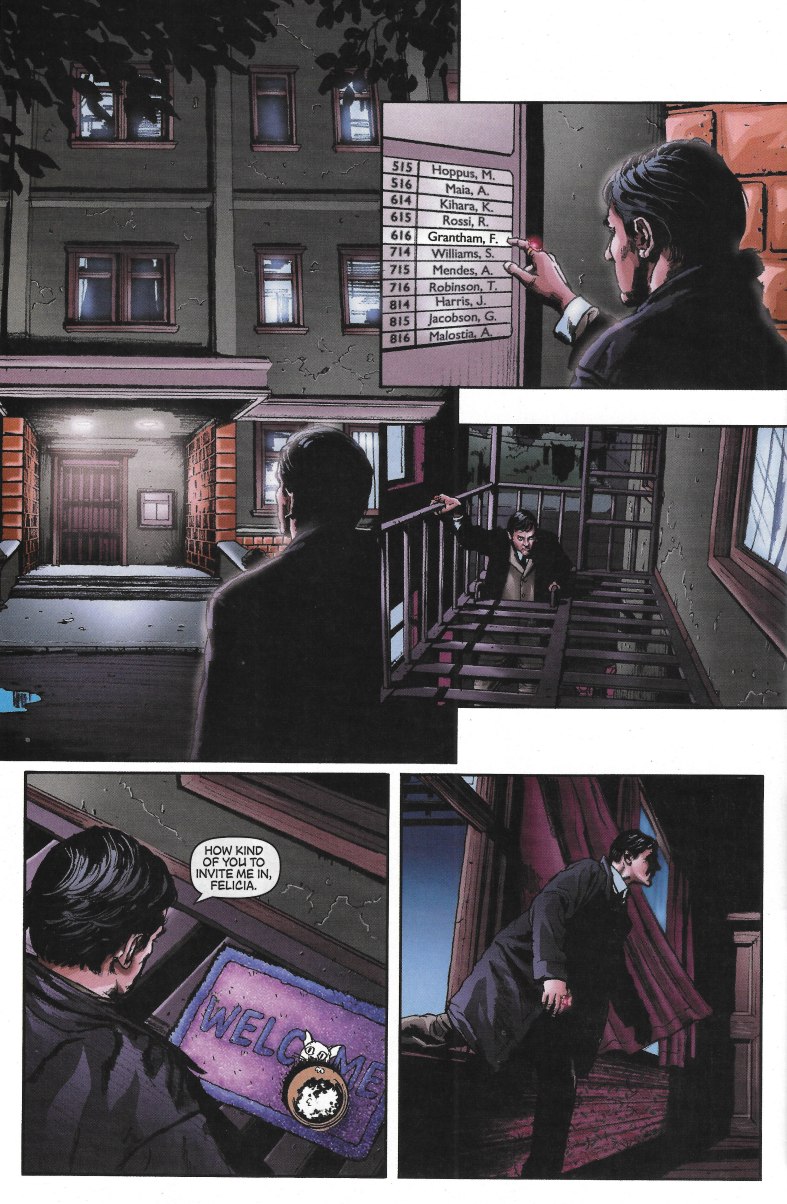 And as Collins is snooping around, of course he encounters our second billed guest… 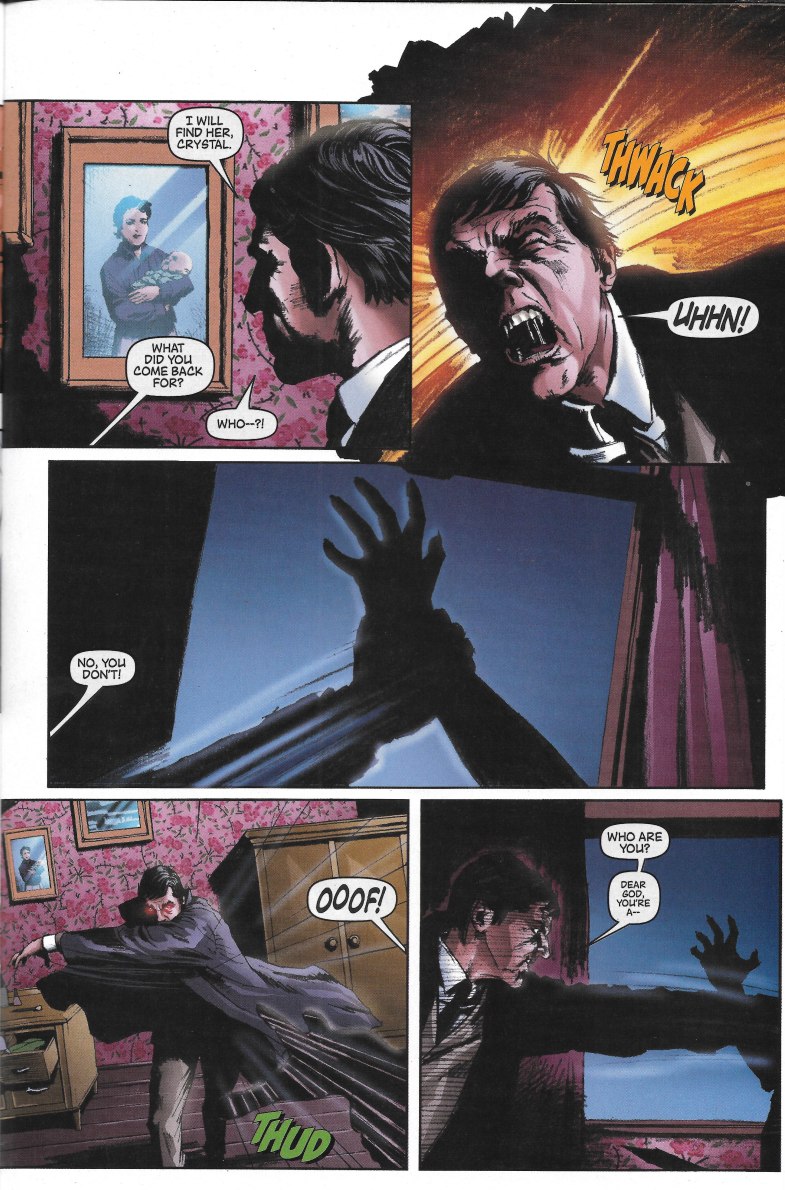 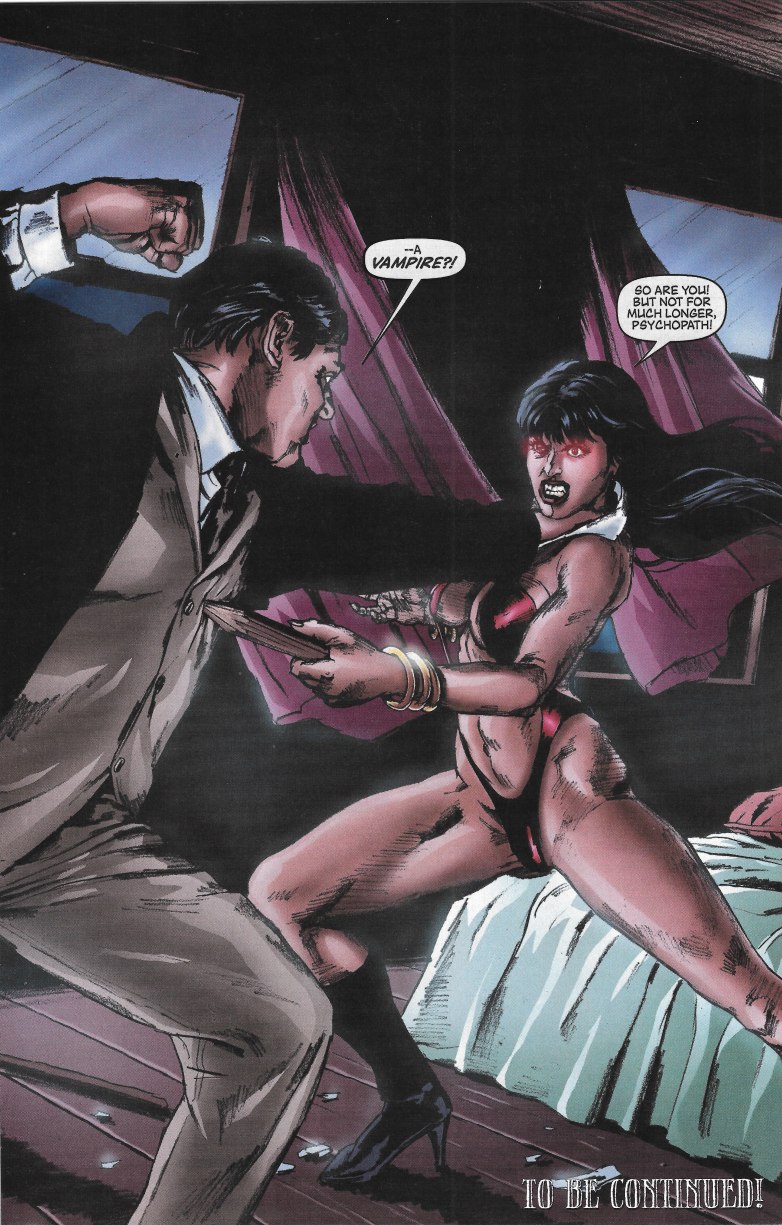 What an enjoyable issue. The drabness of the tv show is dispensed with and it appears all it really needed were some clever jokes for it to feel relevant and “fun” again. At least as much fun as you can have when you are dealing with multiple murders, a serial killer, three vampires, a werewolf and three time periods and four major locations.

It worked for me. All of it. The slow build of the plot elements, the interplay among the characters, even the predictable cliffhanger ending. All of it worked for me. And I’m eager for more. Looks like I’ll be surfing the bins for more of these. I hope there is quite a few to find.
Posted by SonOfCthulhu at 3:54 AM