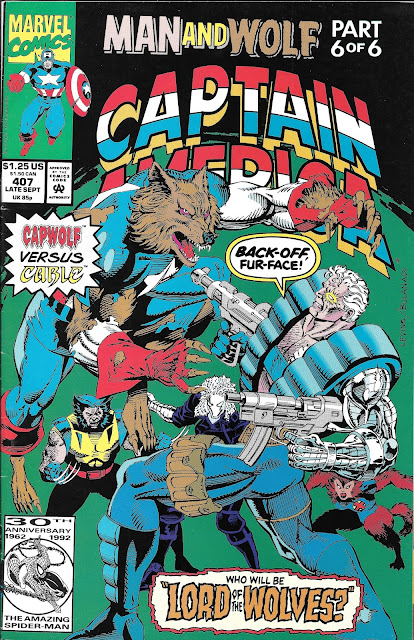 The finale of the CapWolf saga!

Mid-May I popped open a bundle pack and there, nestled like a viper coiled up and waiting to strike, sat this copy of Captain America issue number 407. I’d been bitten, and I knew it.

Last year I covered as much of the CapWolf saga as my sanity dare handle, but it appears that not covering the final issue is something that just wasn’t in the cards for me. Oh, no. The Crapbox demanded I finish what I started.

I figured this made the natural starting point for us in this year’s post-a-day run up to Halloween, since the story is chock full of werewolves.

To those of you who forgot the prior issues I covered and the horrors they contained, I’ll give a brief recap (ha! A RE-Cap!) as we go. Either that or you can go back and re-read parts 3 – 5 of the storyline from last year’s Crapbox.

While those folks following the links are catching up, let’s us get right into the action, shall we.

When we last left Cap, he had been turned into a werewolf by the mad lady scientist Dr. Nightshade. She and her lover Moonhunter were both in the employ of the crazed sorcerer Dredmund, who was using the good doctor to turn an entire town into werewolves. Seems that Dredmund has the power to control most werewolves, a fact we find out because he has several of Marvel’s best known werewolves in his employ.

However, one werewolf he can’t control is our hero CapWolf!

And the reason Dredmund amassed this pack of smelly dog-people was revealed last issue when he called all his faithful werewolves into the town church and proceeded to sacrifice the Avenger Dr. Druid in an occult ritual. We’ll see the results of that bit of magic in just a moment, but for now we join CapWolf, who was too late to stop Dredmund from offing the useless Doc Druid, barely holding his own against hordes of wolf-persons.

It is almost enough to make you feel sorry for Rik Levins having to draw a million werewolf shots before this is over. While CapWolf is battling his way through the horde, Dredmund takes the mystical marble he let Druid bleed all over and places it at his throat causing this magical transformation… 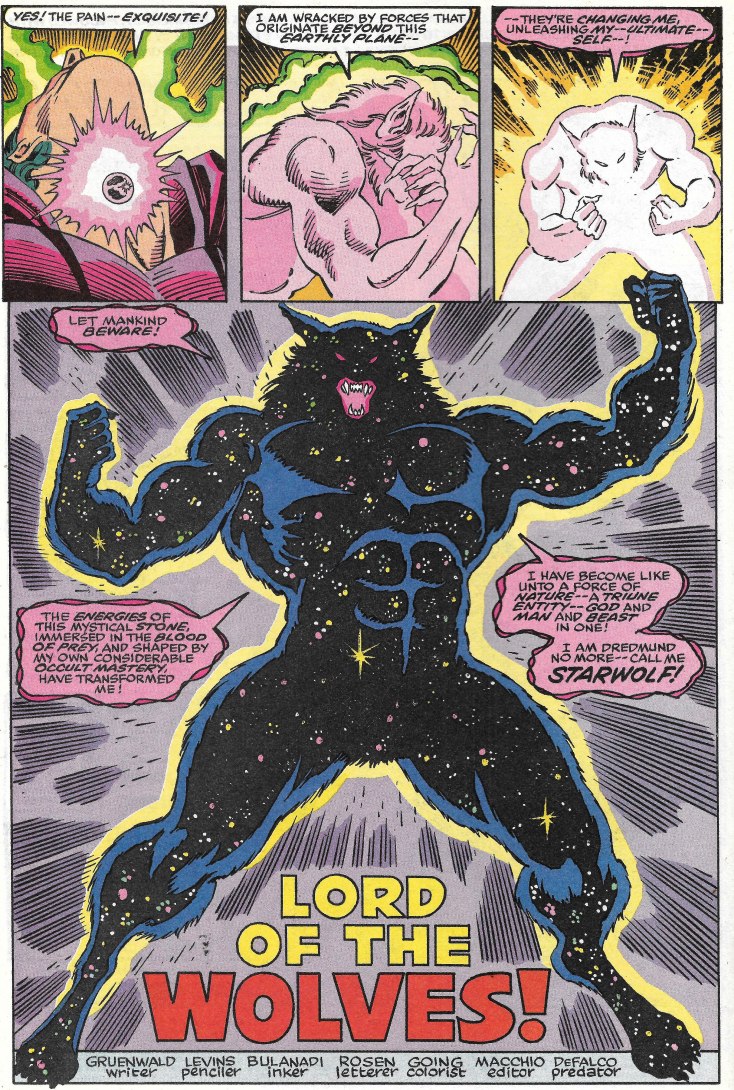 Something about this screams “bad prog-rock album concept” to me. Anyway, it seems now CapWolf REALLY has his hands…er, paws full. Before Dredmund was just a crazed magician, but now he’s got cosmic power set written all over him. Just look at all those sparkling stars! 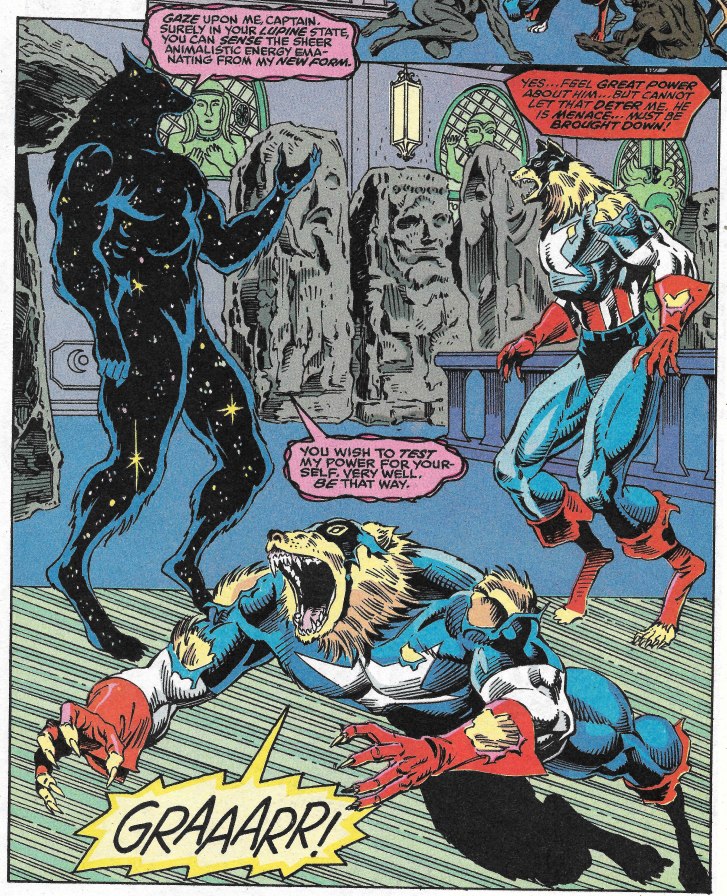 And just to show how all-powerful he is now, he *ahem* calls off the dogs. This allows CapWolf to make a play to take down the cosmic collie, which doesn’t work out so well. 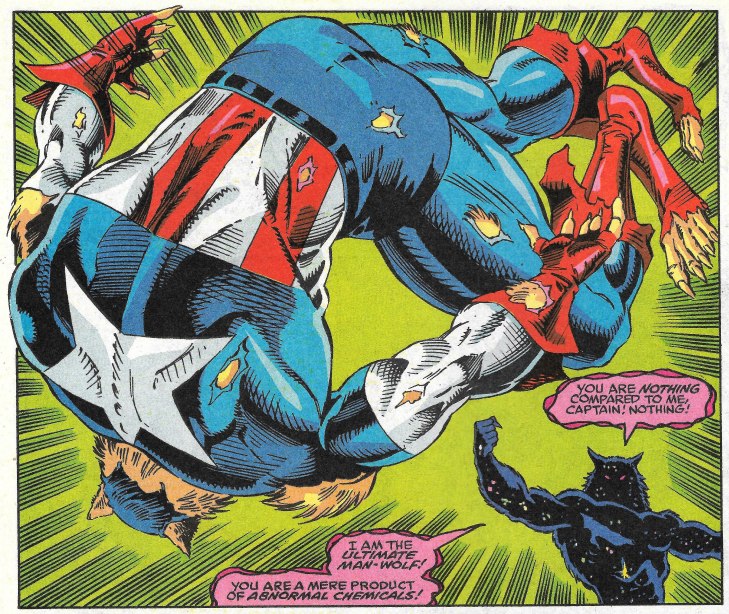 StarWolf trashes CapWolf, his body coming to rest at the feet of the Stonehenge pillar Dr. Druid is lashed to. Starry then calls out to his dog-men to allow their animal natures to get the better of them. I’m certain one of those man-wolves will piddle on the floor at those orders.

Like he’s given them a chew toy, StarWolf orders his follower-wolves to “rend Captain America limb from limb.” CapWolf isn’t keen on that idea and leaps to the top of Stonehenge rock. The deck is stacked against our dogged hero, when all of a sudden, he gets an assist. 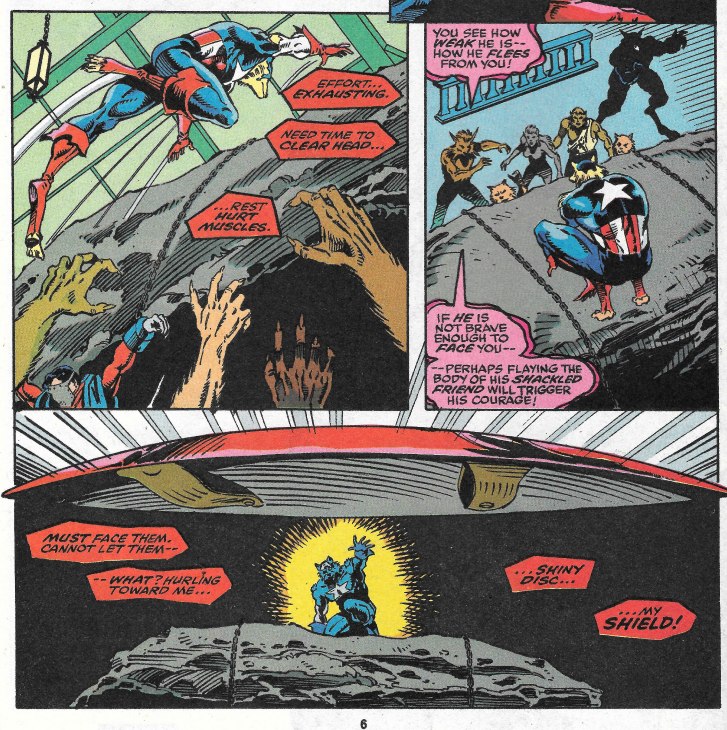 Part of me expects him to catch that shield in his teeth like it is some giant frisbee. Instead he does the more common-sensical thing. 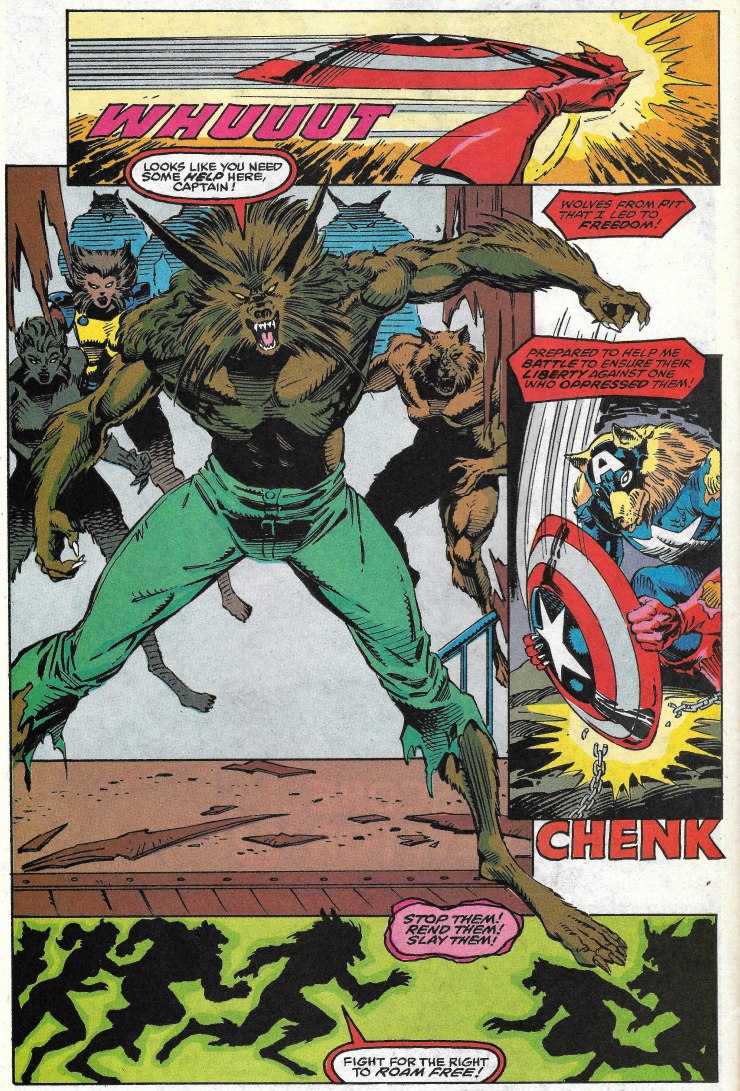 And who should lead this assist but the werewolves Cap let out of Dredmund's pit last issue. Now we’ve got werewolf-on-werewolf action taking place, which might be something to see, except our penciller has decided to check out for most of the rest of this. Jus look at that oversized left foot.

In thinking on it however, I’m not certain anyone could make action shots like the one below look less goofy. There is just too much inherent silliness in the whole concept of this book to not feel way, way over the top. Maybe giving up is about all you can really do? 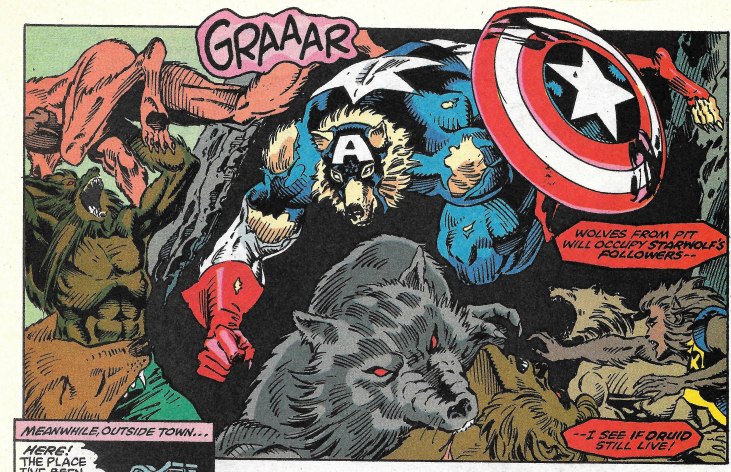 As if sensing that he had beaten his art team senseless with his storyline, Gruenwald throws in a couple of X-Factor guest stars for good measure. 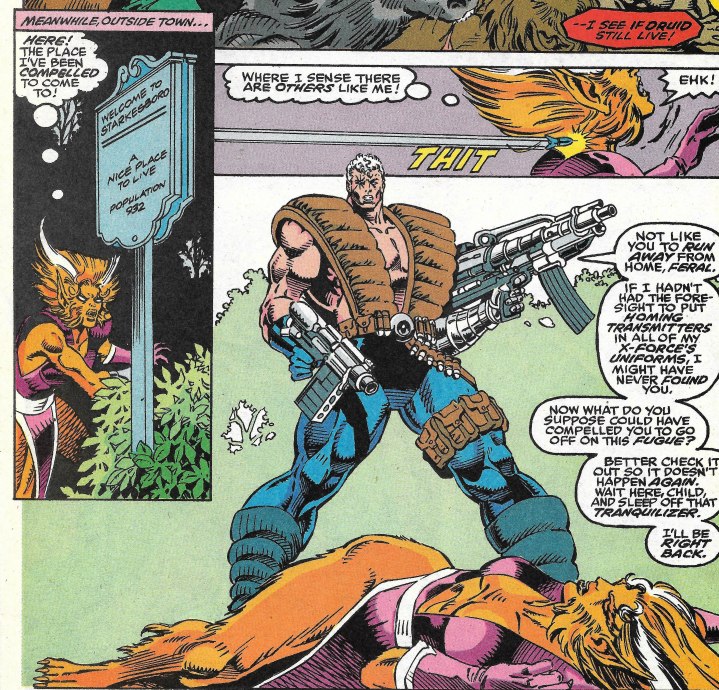 That’s right! Shirtless Cable is in the hizzouse. Feral appears to be out of the wolf pack for the foreseeable future. All to the good as we have too much fur flying at this point anyway.

CapWolf takes Druid off the sacrificial altar and while StarWolf claims he is dead, CapWolf realizes Druid is still alive. Not sure how that can be, as we saw Dredmund slice his throat open just an issue ago. Cable shows up in time for a bad one-liner and some distraction-action. 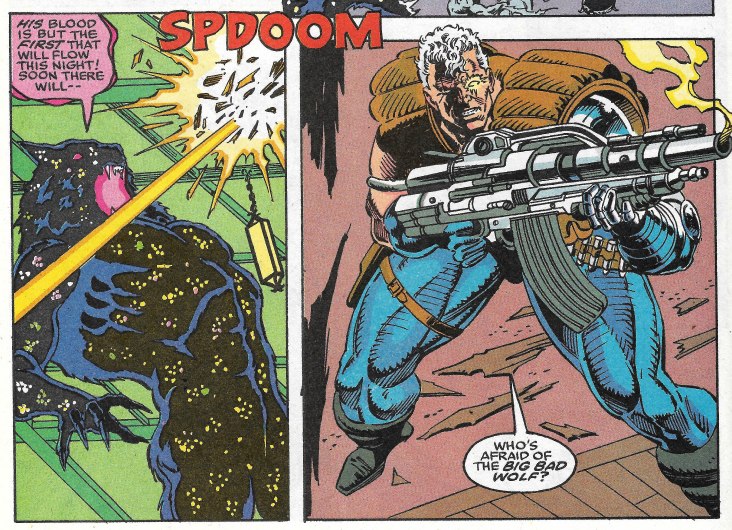 But Cable going full on “kill all these werewolf monsters” mode only leads to CapWolf making the argument that perhaps they should use less than lethal force…by breaking Cable’s gun and jumping on him. 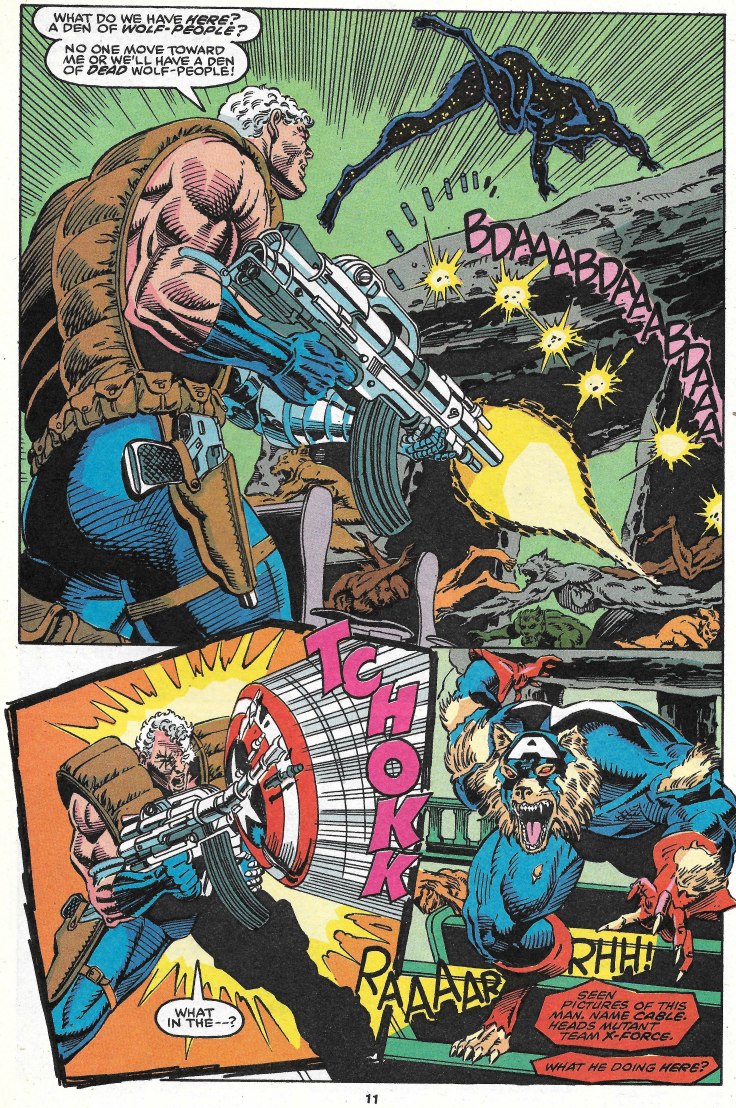 Now we’ve got Cable vs CapWolf, which gets increasingly hilarious. I’m loving that CapWolf bites Cable’s gun barrel off. 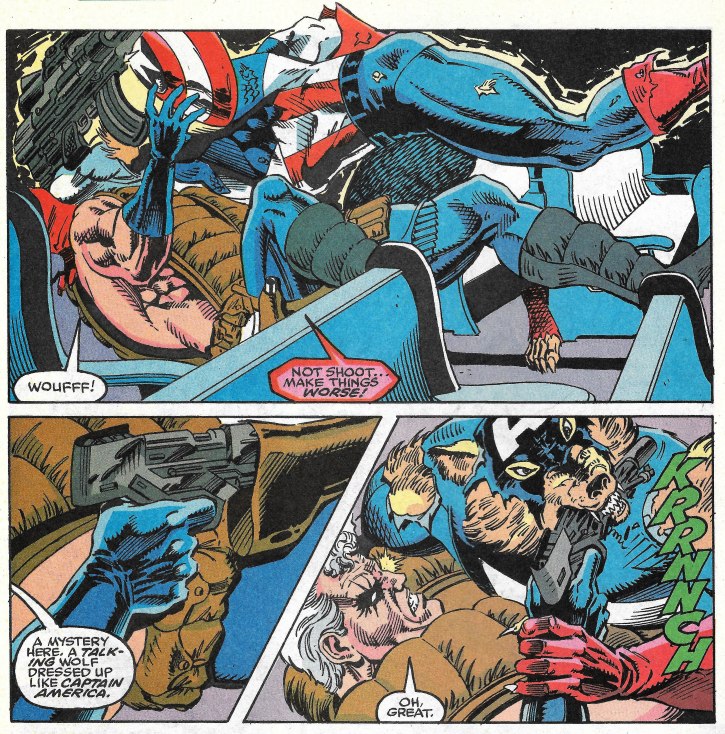 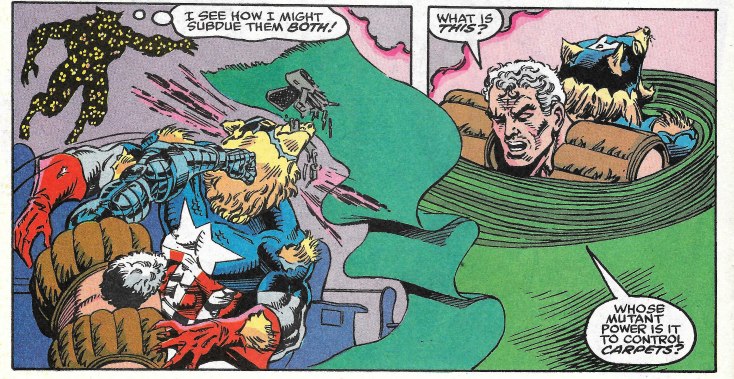 How handy is that? StarWolf’s powerset is pretty astounding. Cable’s line tells me even the book has given up the pretense of being about anything serious. Meanwhile, the person responsible for all these werewolves, Dr. Nightshade, finds herself in a bit of a pickle. 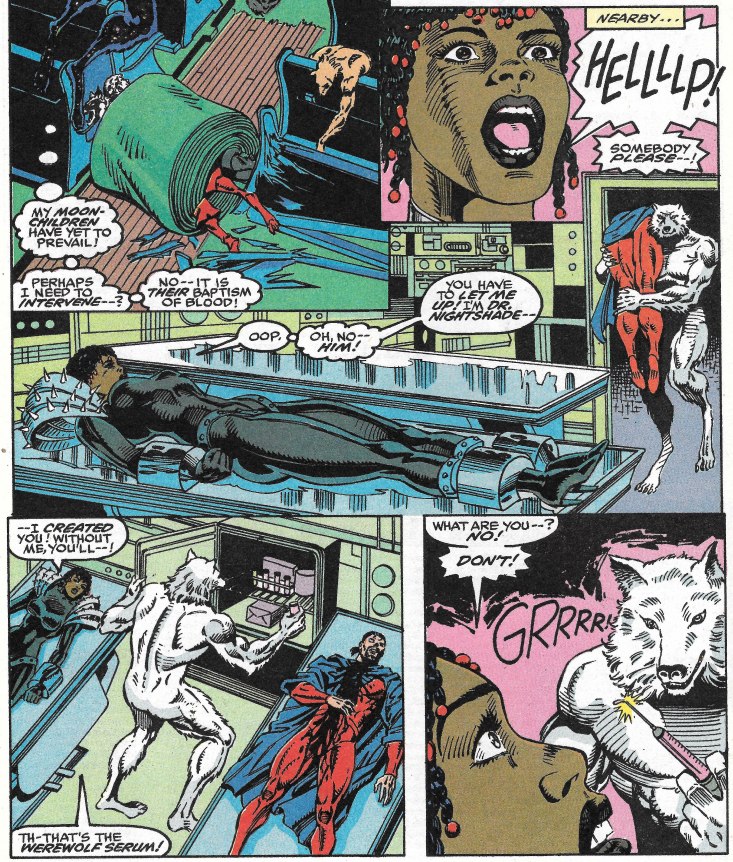 That’s Man-Wolf threatening her and he doesn’t make idle threats. 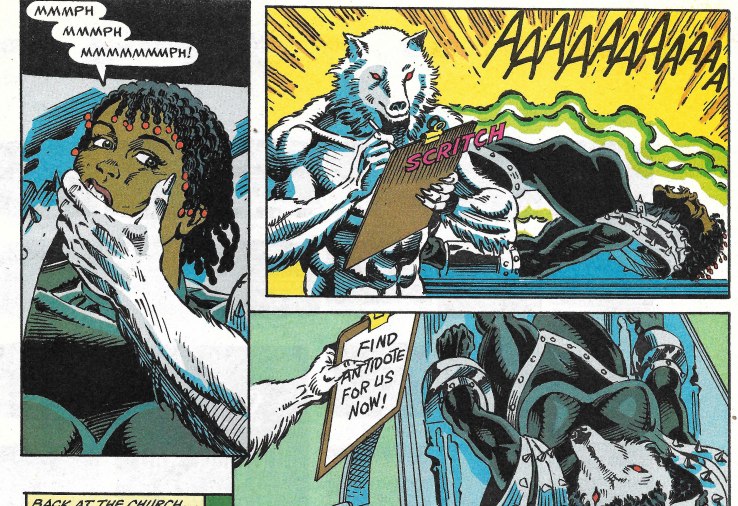 And now that she’s transformed, I think the good mad-scientist will have quite a bit of incentive to undo her nefarious works.

Meanwhile, her lover Moonhunter has escaped the cage CapWolf tossed him in and because you can’t ever have too many guest stars… 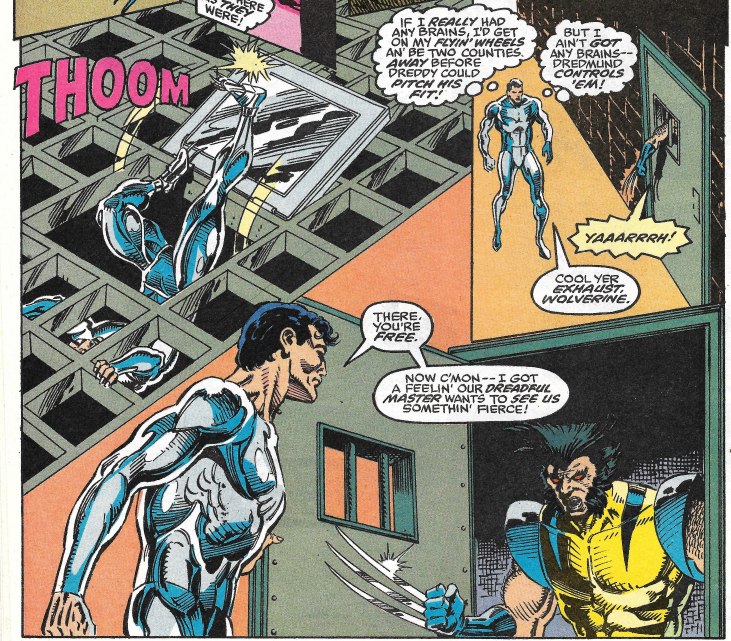 …he releases the feral Wolverine from his cage. I have to say that this storyline has done everything possible to crap all over Logan and part of me is sad that it isn’t done yet. Also, Levins is again just giving up on the art because Wolverine now has claws that are the size of his entire forearm.

…but before the pair can make it to Dredmund, Moonhunter decides to check in on his girlfriend. When they arrive, it becomes clear that things have gone to the dogs. 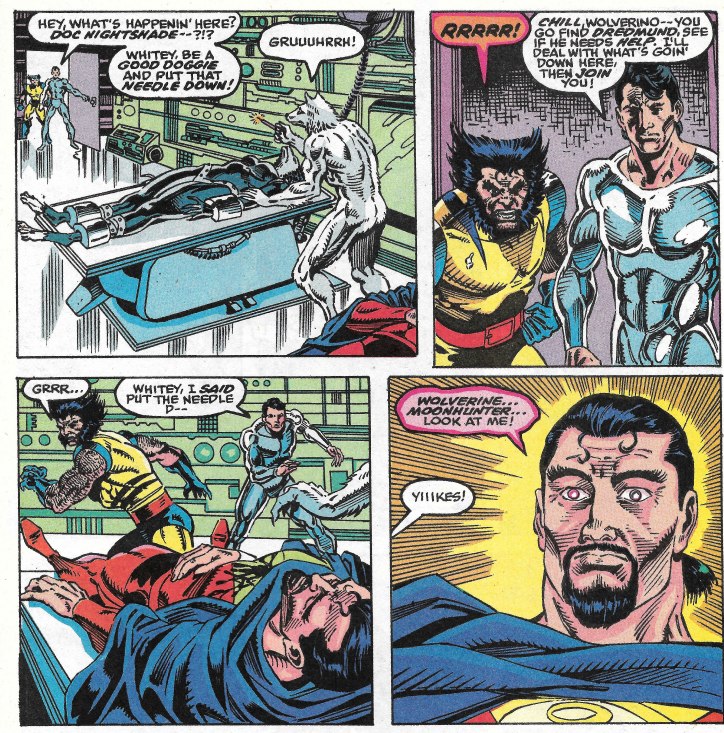 Note that Dr. Druid who last issue had HIS THROAT CUT OPEN and was drained of blood until he was DEAD, now is all better now. Maybe that’s an undocumented superpower he has there or just maybe Gruenwald is tired of plotting this crap in a logical, consistent fashion, but either way I have to call bullshit on this. Because that right there is some bullshit.

Anyway, he unhypnotizes Wolverine and Moonhunter, breaking the control spell that Dredmund/StarWolf had over them. 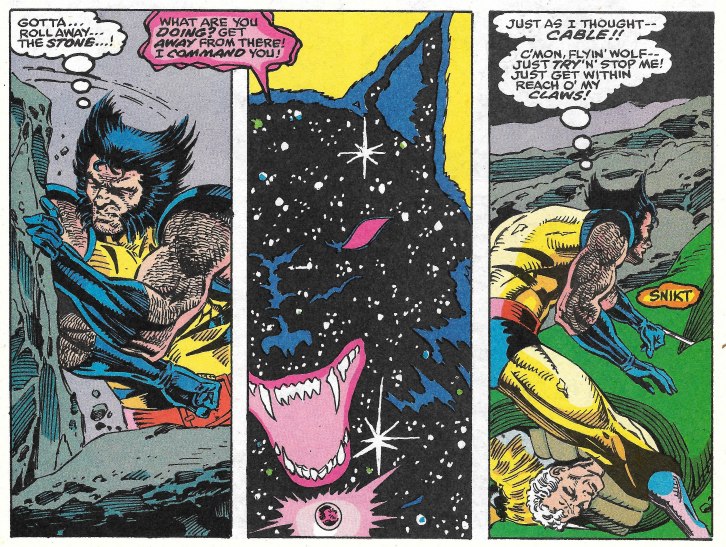 This allows Wolverine to assist the non-dead, but still under Stonehenge-rubble and bundled up in a carpet roll, Cable and CapWolf to escape confinement while StarWolf merely looks on. I guess his carpet-controlling powers were limited time only, because he just lets this shit happen.

In a flash our heroes are up and around, with CapWolf having a plan of action to end all this silliness. Or at least most of this silliness. It begins with getting the old fastball special from Cable and Wolvie. 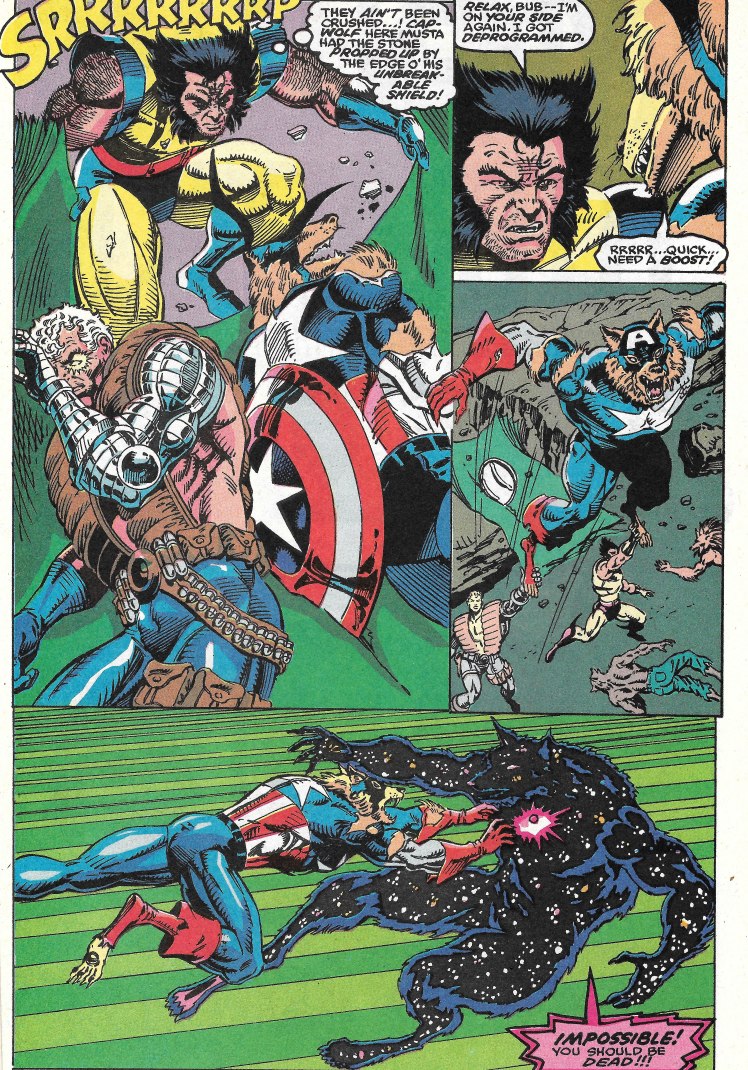 …so he can leap on StarWolf and pry the Moongem from StarWolf’s neck. From the pictures, it appears he’s having a howling good time making the attempt. 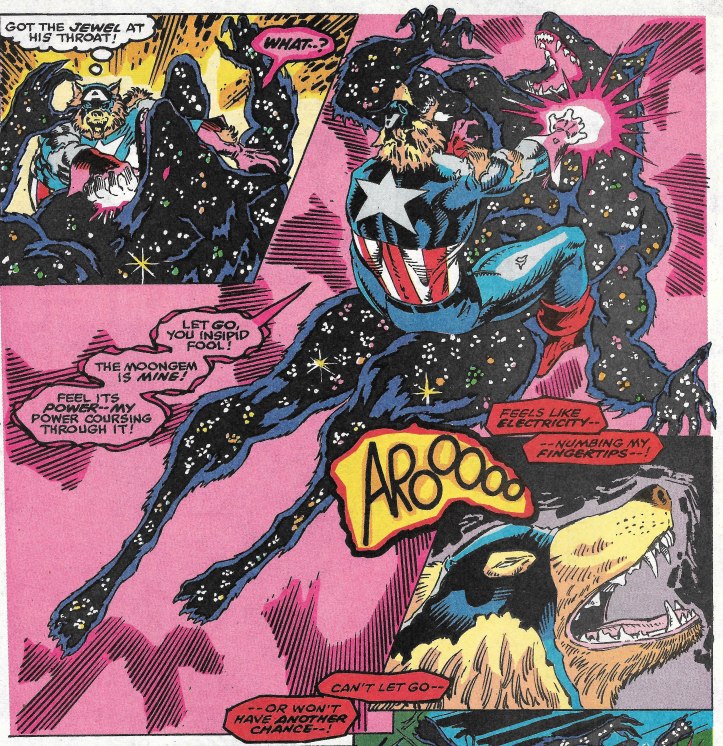 As soon as it’s free, he gives it a toss to Cable who… 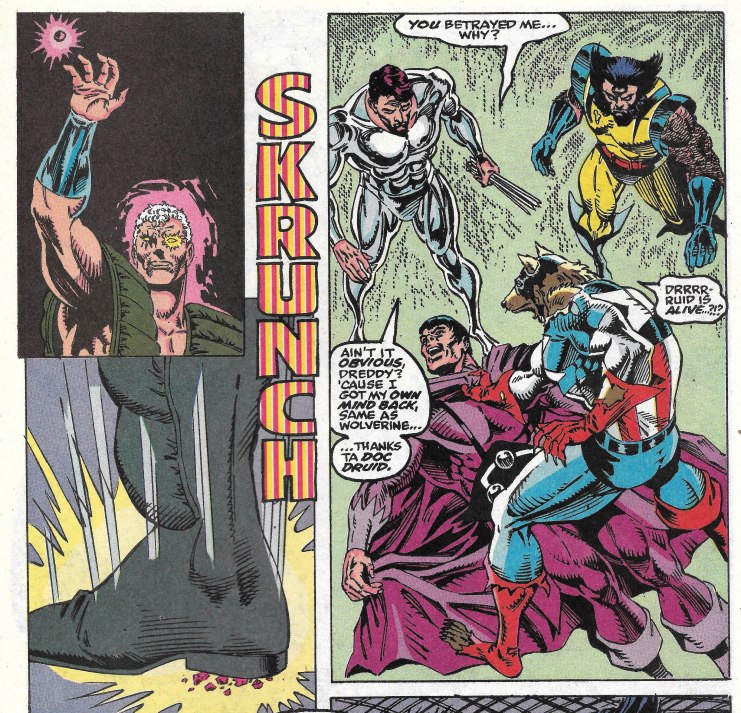 …crushes the blood-soaked marble under his heel. That leaves a depowered Dredmund passed out in CapWolf’s grip. Note that even CapWolf is surprised that Dr. Druid is alive, and he hasn’t been forming complete sentences so well. 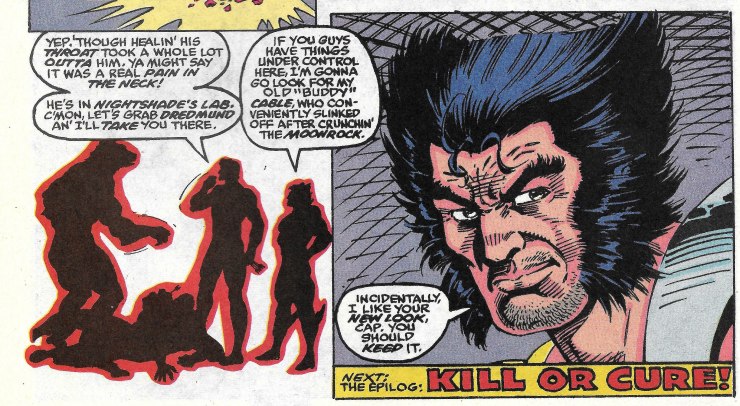 You’d think we’d leave this sixth part of a six part saga with everything thing returned to normal. You’d think that, but they needed space for a crappy Diamondback backup feature, so we exit here, with Cap still a goofy puppy and the possibility that he might stay that way for a bit.

There you have it: an ending to one of the most silly sagas to come out of Marvel in decades. It was total schlock and I think everyone knew that, fans and creators alike. Otherwise why throw in so many guest stars and have it last for six issues. There are still fans out there that love this though. Marvel even issued a CapWolf head for the Marvel Legends Captain America Figure.

I guess every dog has his day.
Posted by SonOfCthulhu at 5:39 AM