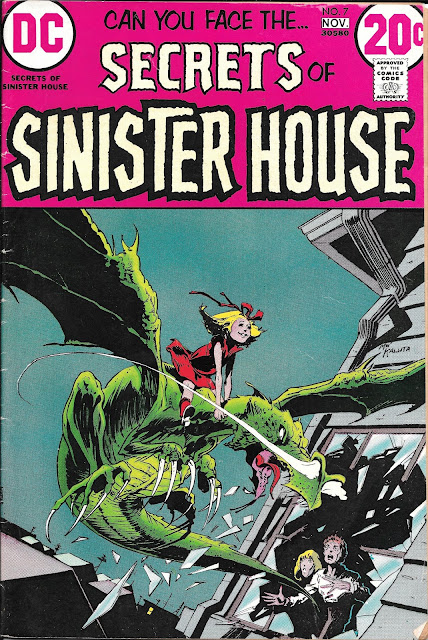 DC comics are home to two of the best-known House-based horror anthology series: House of Secrets and House of Mystery.

But there is one other house, a much smaller, forgotten abode. A book that only ran a slight 18 issues before the roof fell in and the walls tumbled down. It was the abode of Eve, cousin of Cain and Abel. The place earned the name Sinister House and its secrets could make you scream with delight.

Don’t believe me? Well, sit back as I tell you three tales from the Sinister House and let you judge for yourself…

This first story cemented this issue’s place as the final anthology in our run. I have seldom been so entertained by a story as much as I have this one. It’s the dessert to our heavy meal of horror the last four weeks have fed us. The kind of ending decadence that tastes like heaven but weighs less than a feather. A lite and airy soufflé. A crème whipped chocolate mousse. Something you can still finish even though you are stuffed to the gills.

I’m going to let Eve lead us in… 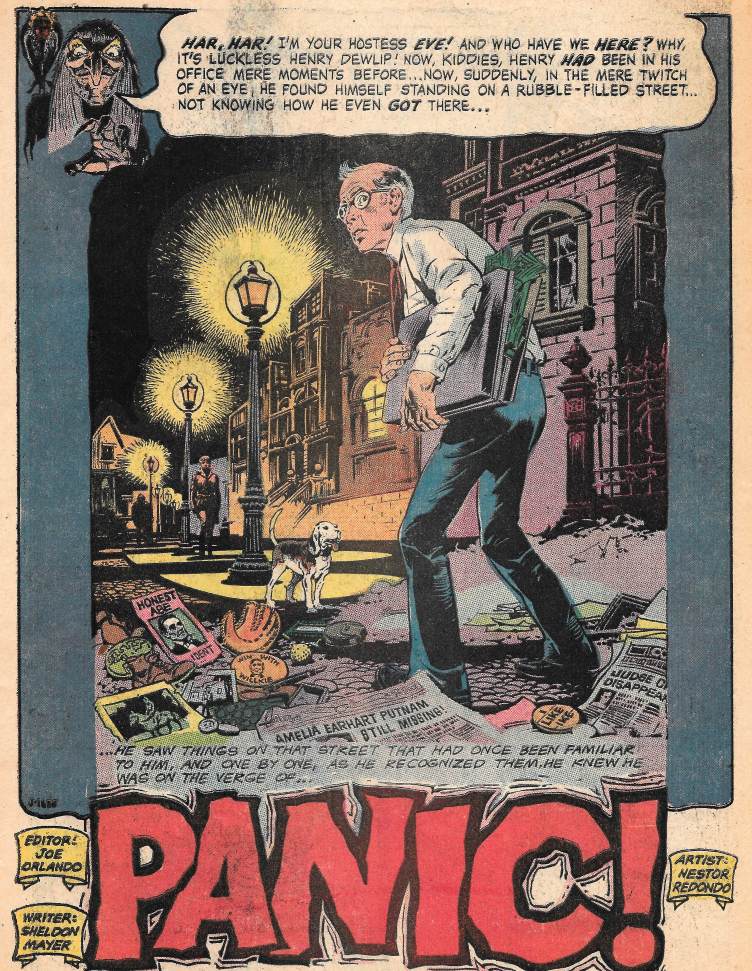 Henry appears lost. Once you read our tale, you’ll know why. Far be it from me to spoil that. We are going to let his flashback spin this yarn of how he came to be on this particular street in this extremely special neighborhood… 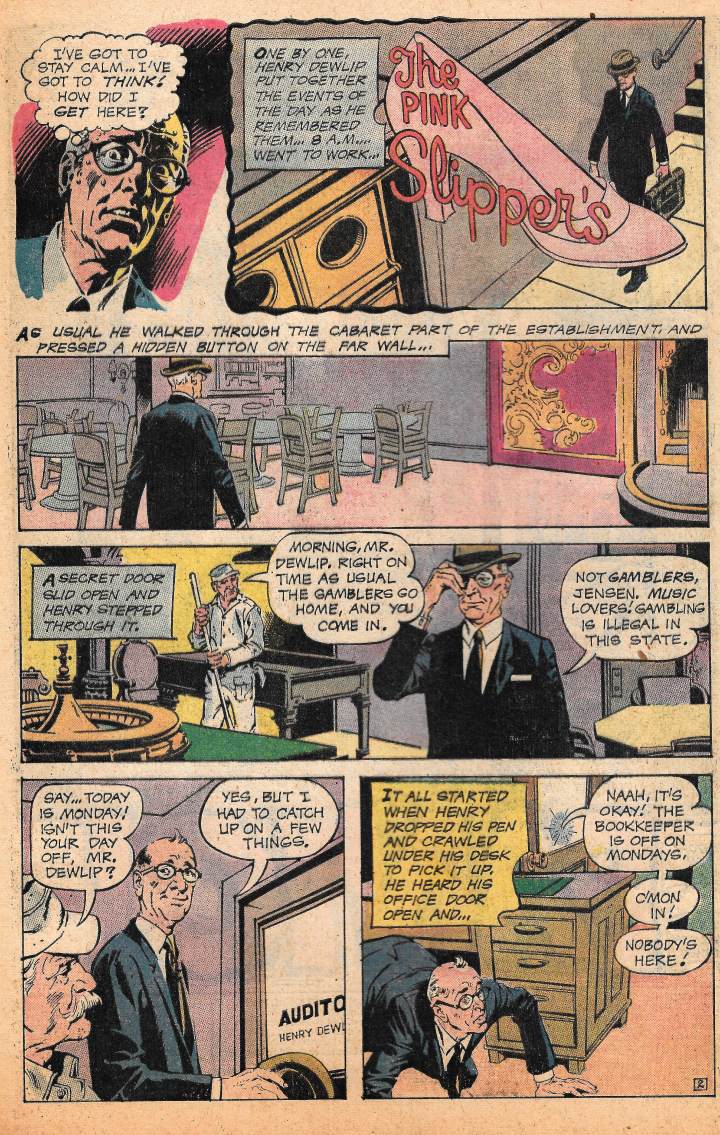 Henry Dewlip looks very proper and he ought to. His job is accountancy, and that would all be well and good except, his bosses are mobsters. He arrives on his day off to “catch up on a few things.” What Henry catches might just save his neck. 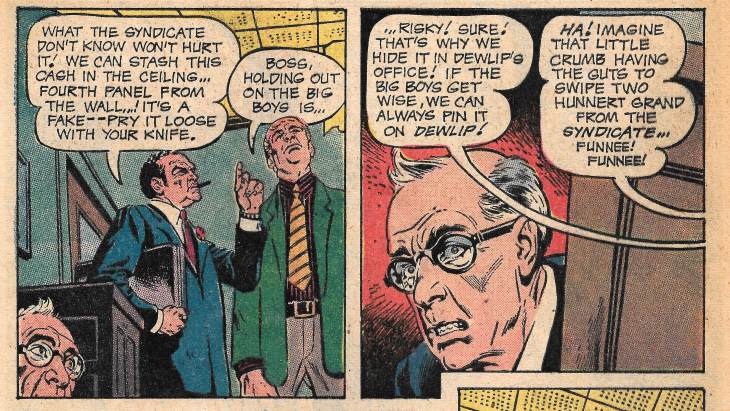 Yup, Henry’s bosses plan on using him as a scapegoat if they get caught skimming off the top. This means Henry has to find that money before anyone finds out. Then he can hotfoot it out of the country.

But as he’s poking through ceiling tiles, the door to his office opens once more… 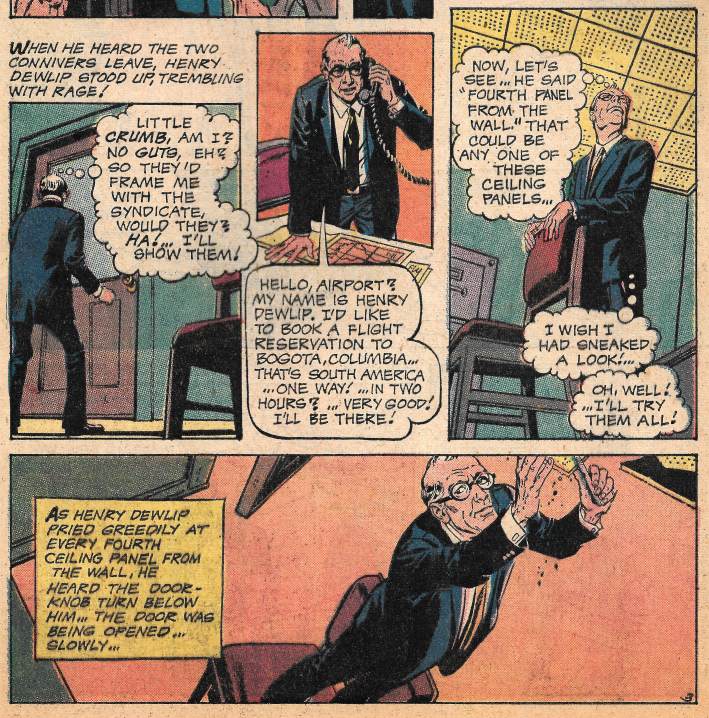 And he is caught in the act by the STRANGEST little girl! 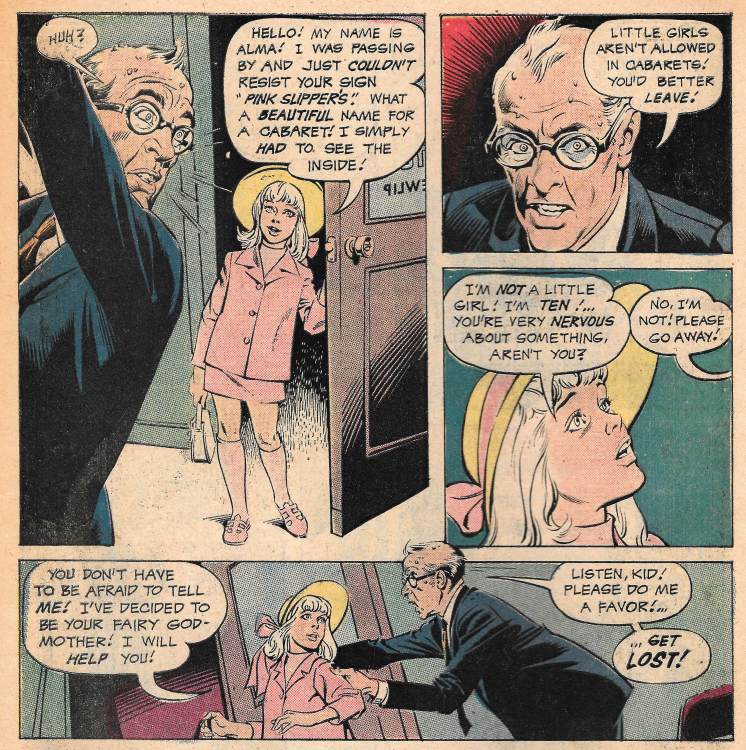 Telling the girl to get lost isn’t the nicest thing to say, Henry. You might regret that later. Especially since she’s offering so nicely to be your Fairy Godmother and everything…

…The moral to this tale will be either DON’T work for the mob or DON’T turn down a witch who is trying to be a nice for a change. Or both. I can’t really tell. What I can tell from this panel is that Henry’s bosses are about to catch him in the act…

…and then Henry will likely catch a bullet. Unless someone is there to stop them… 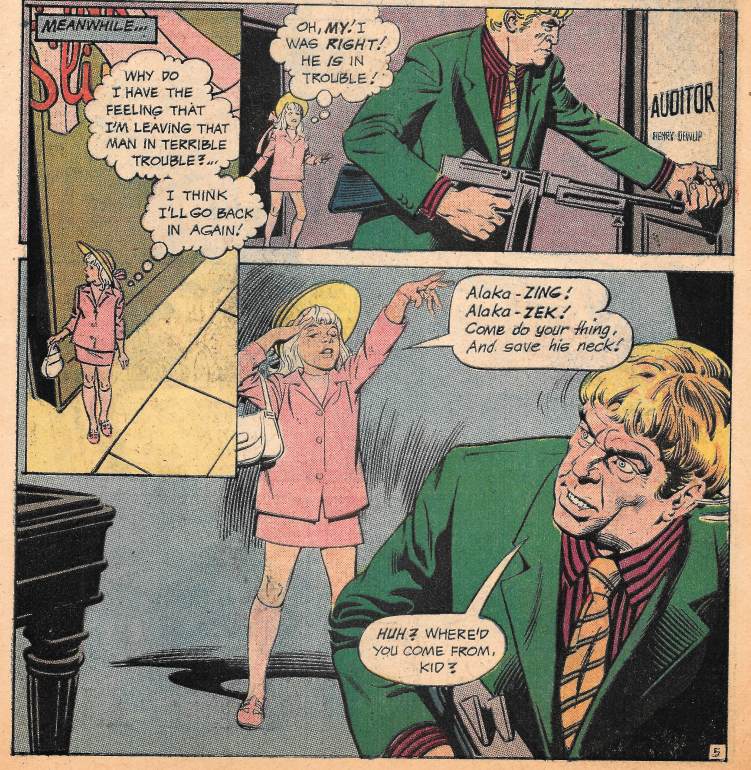 …well not her, obviously. She’s just a ten-year-old gi*… 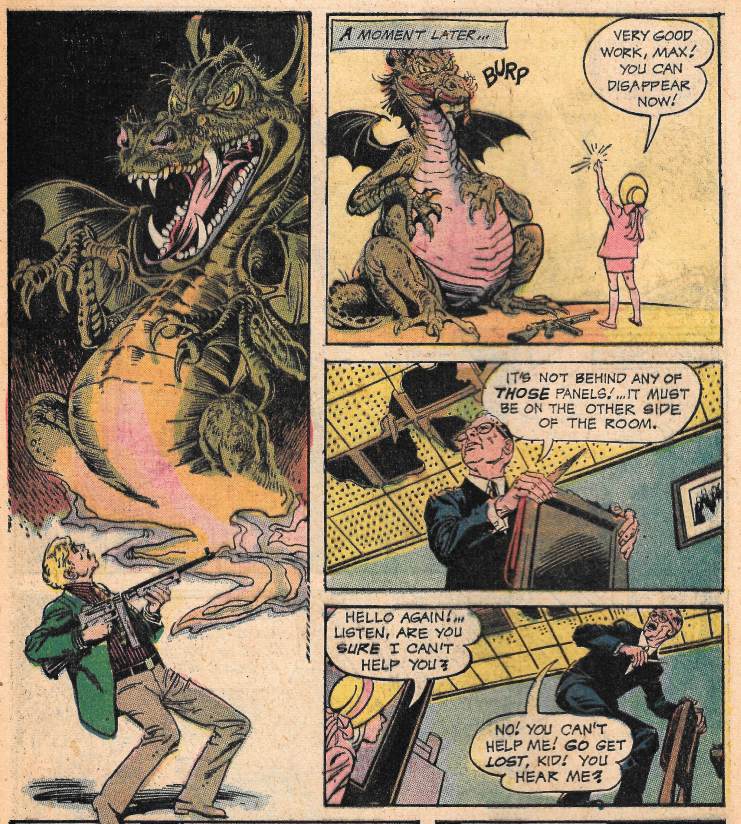 Holy SMOKES! She really IS A WITCH! I mean Fairy Godmother! Whatever. She can do magic. And that dragon can handily eat a gangster.

Henry, frustrated that he is talking too much time finding the case full of money, tells her to get lost for the second time…

…which again, I would be very careful about saying. Especially to someone who can help you FIND THINGS you might be looking for. 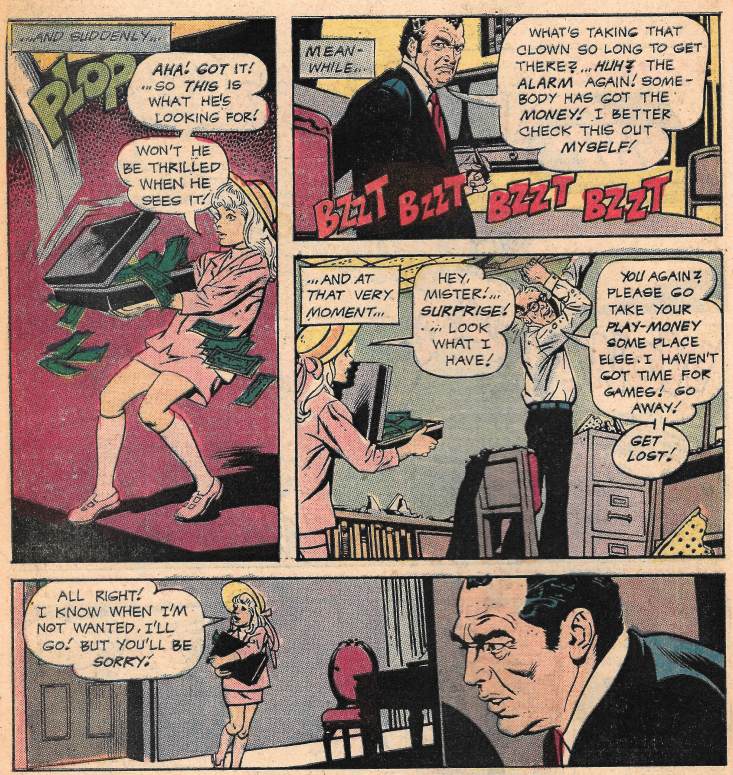 Like a briefcase full of money. Henry doesn’t believe it’s real, of course, but our head gang boss knows his own case.

Right about then Henry finds the place in the ceiling tiles where the case WAS, but is no more. Thankfully, Alma has left him a note.

And as he rushes out to have a chat with her, he runs into the boss trying to take the money from her by force. That earns the boss a dose of what Henry has been giving Alma all day. With a simple “Get Lost,” the man vanishes. Henry is perplexed. 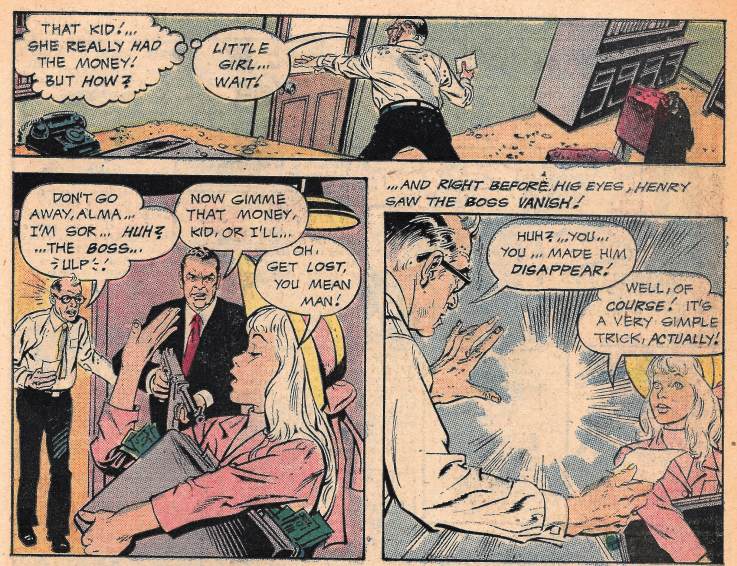 He gets his briefcase of money, but by now Alma has had enough. She’s decided being an evil witch is much easier. Henry, never one to catch on too quick, pesters her to show him how she made the boss disappear. So, she shows him by making HIM get lost too! 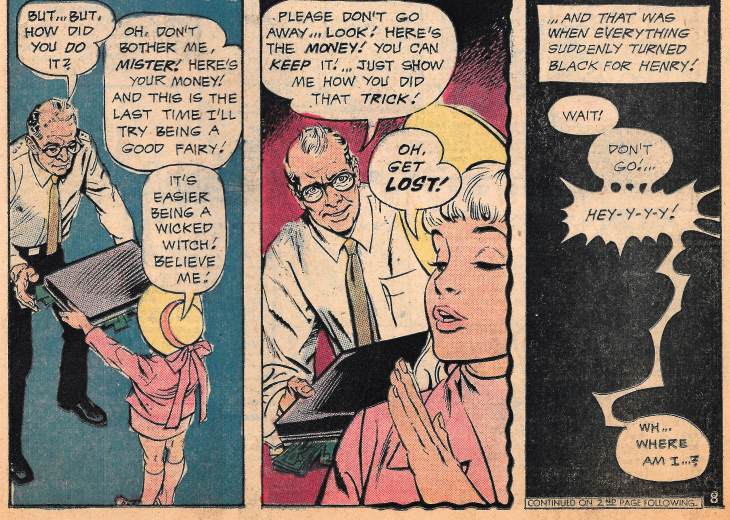 And Henry finds himself here…on a street where all lost things go. Things, pets, and even people wandering aimlessly for all eternity… 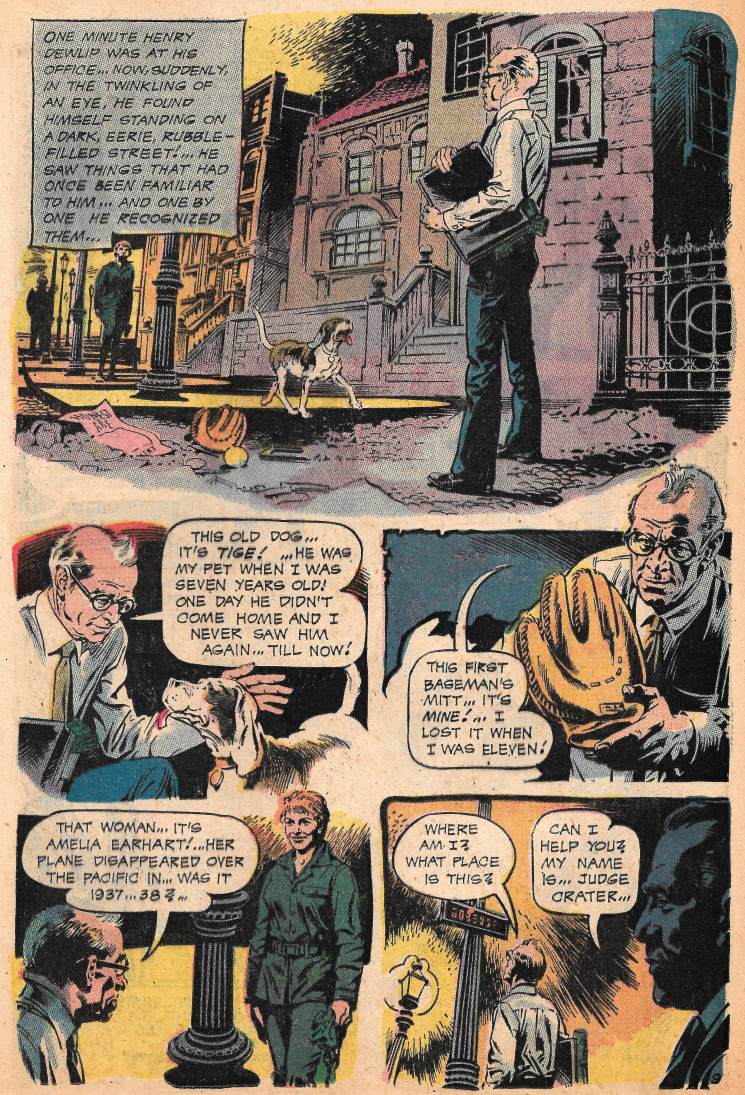 Henry tries to escape by turning the corner…only to find himself back on the same street again. He’s trapped in a maze that has no exit. 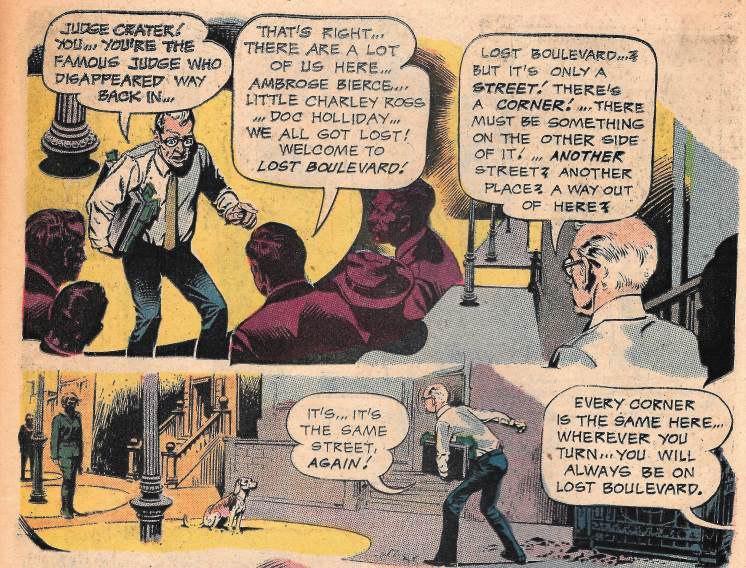 He has truly “gotten lost” in a way that he can never be found. Except for being found by this gentleman… 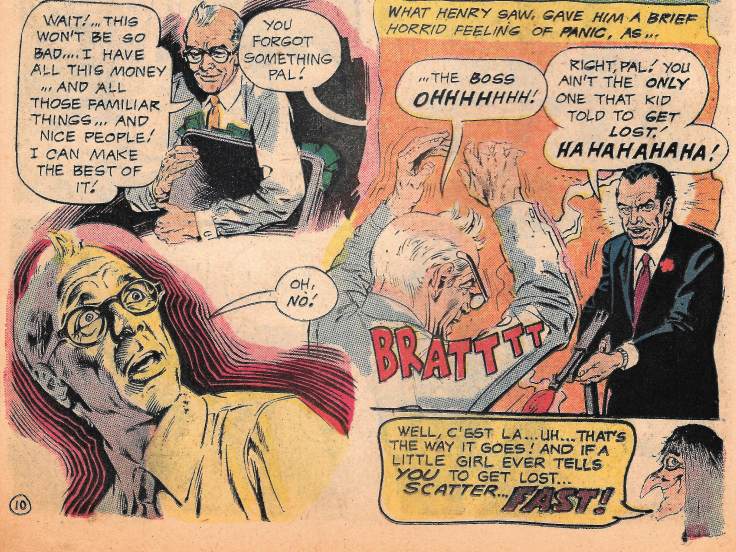 The lesson here? Always be kind to children, as you never know how much help they might be. And whatever you do, don’t ever-ever tell them to GET LOST!

See how wonderful that first bit is? A dose of humor, a drop of real terror, and an ending that seems like a slice of just desserts. Mmmm…that is so good! And speaking of good, DC has one of my favorite Mad artists on the payroll for a bit. How about a few…

Now that’s a silly bit of whipped up fluff, like a dollop of Cool Whip on top of our dessert. Odd to find it here, years before his Groo the Wanderer book took him into the color comics realm. I am a huge fan of his Mad magazine doodles and this is an unexpected pleasure. 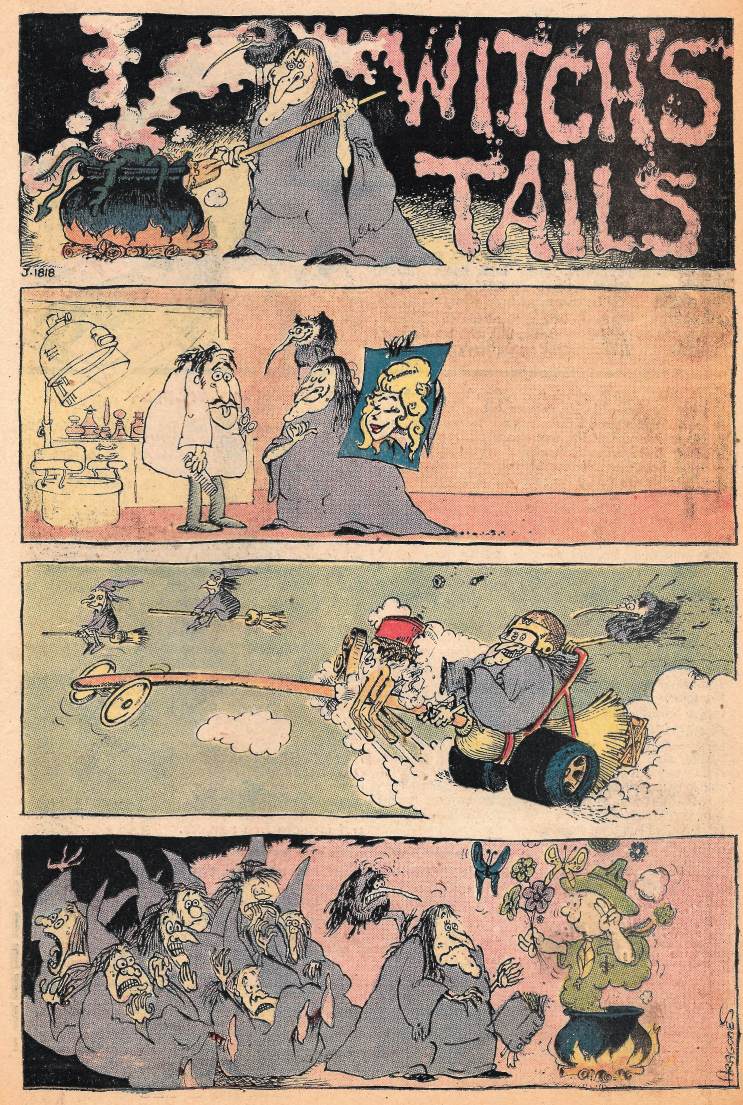 Onward we must track though before our dish reaches room temperature. Let’s give ourselves a drink of something to wash down all this sweetness.

“As Long as you Live…Stay Away from Water!”
Script – Sheldon Mayer
Art – June Lofamia

There are stories I’d love to go into about Sheldon Mayer, but time won’t permit. He is credited as helping Siegel and Shuster secure a sale on their first Superman story, for one. He was inducted into both the Jack Kirby Hall of Fame and the Will Eisner Comic Book Hall of Fame too. And his career at DC spanned several decades and countless titles. But time won’t permit more than a tip of the hat to this great man and a chance at appreciating another of his stories, this time about a prophecy that may come disastrously true... 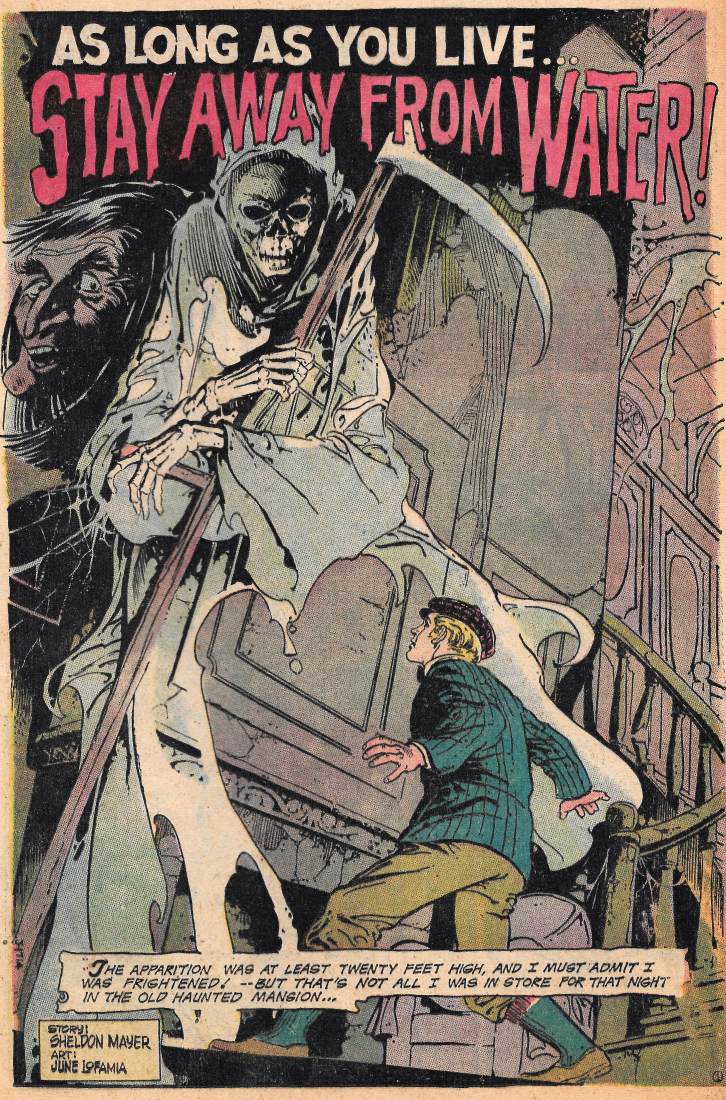 June Lofamia is doing the art here and she has an impressive sense of style. I love the angle she gives this opening and how she makes the structure appear to loom above our protagonist. He’s about to be scared out of wits.

Appears he is tasked with not leaving this mansion-like hall while various spooks and phantoms attempt to drive him from it by scaring him and dousing the young man with pails of water. 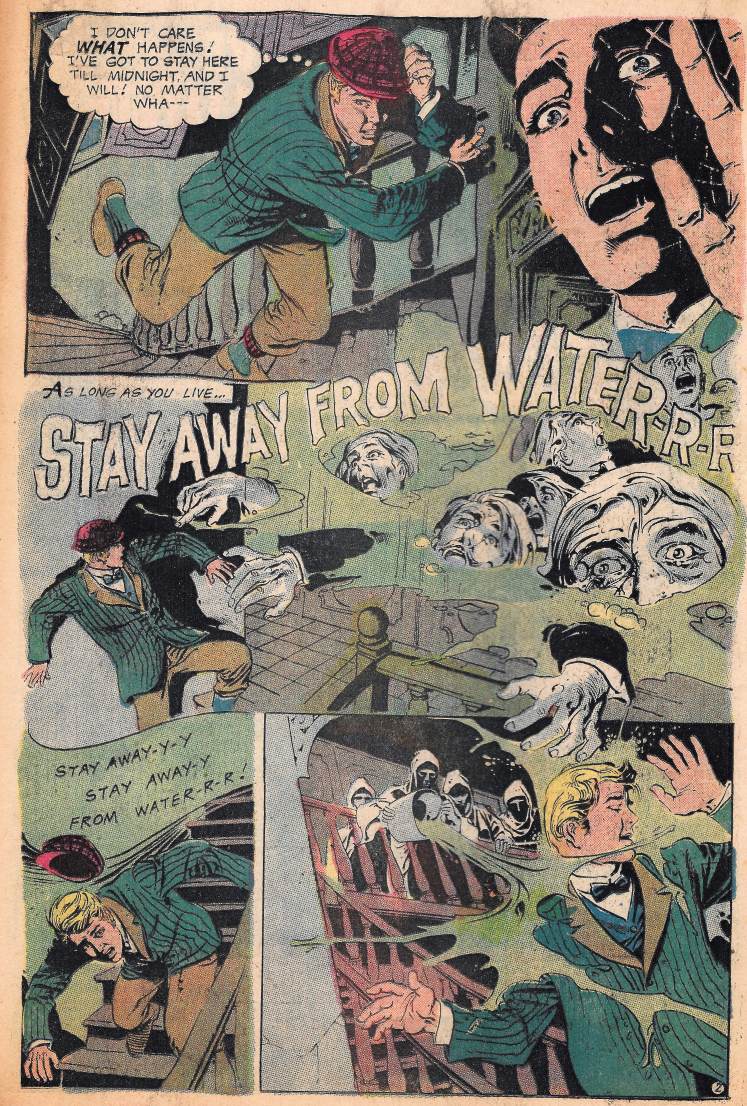 That’s kind of insulting when you think about it. We’ve seen ghosts slime people but never hose them down with water. New tactic, I suppose.

But don’t look now, those aren’t ghosts at all. They are college students. Appears all this hullabaloo is just a fraternity initiation rite of passage and NOT some kind of dire warning. 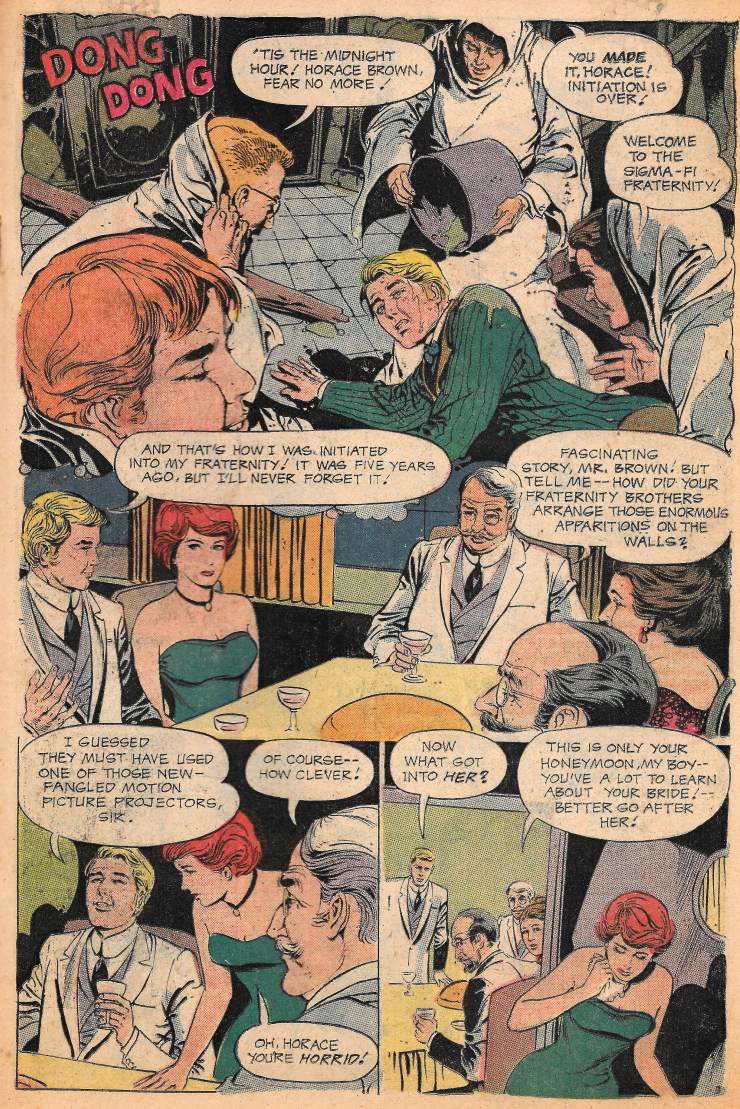 Horace Brown has got a lot to learn about ladies, it appears, as his newly-minted bride was upset by some article of his recounting.

Appears she thinks there was more to those portents and visions that what Horace believes. Not only that, with her brother being one of the Frat boys, she’s sure that they didn’t have anything to do with the warnings Horace received… 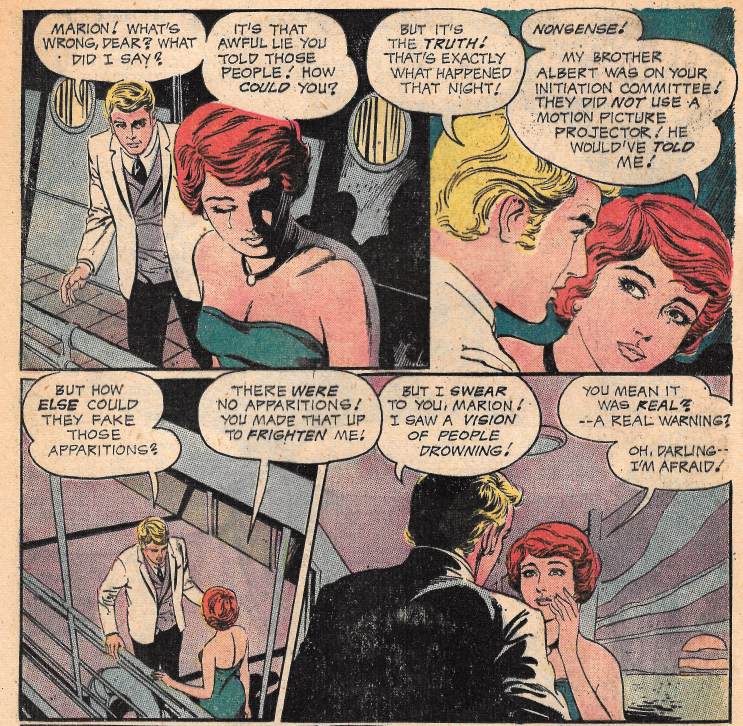 Warnings that Horace should have listened to, instead of making Honeymoon arrangements to travel on this particular ocean voyage… 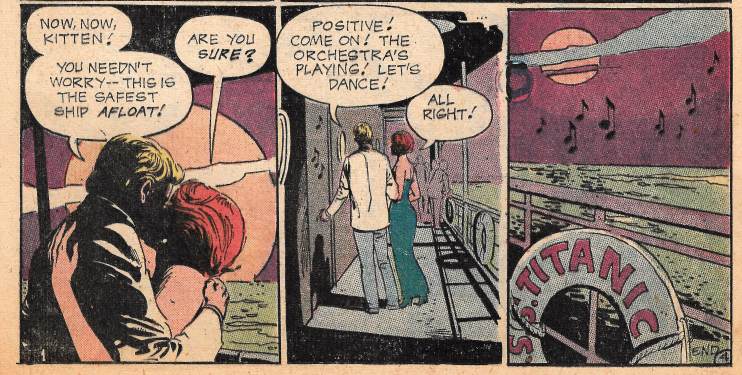 …and there you have a neat twist that wraps up our four page story nicely.

And with that we are on to the after-dinner mint. It’s a wafer-thin affair that is so balanced and delicate that I dare not interrupt it with my ramblings. A story told both in the distant past and the present simultaneously. I give you, in its entirety… 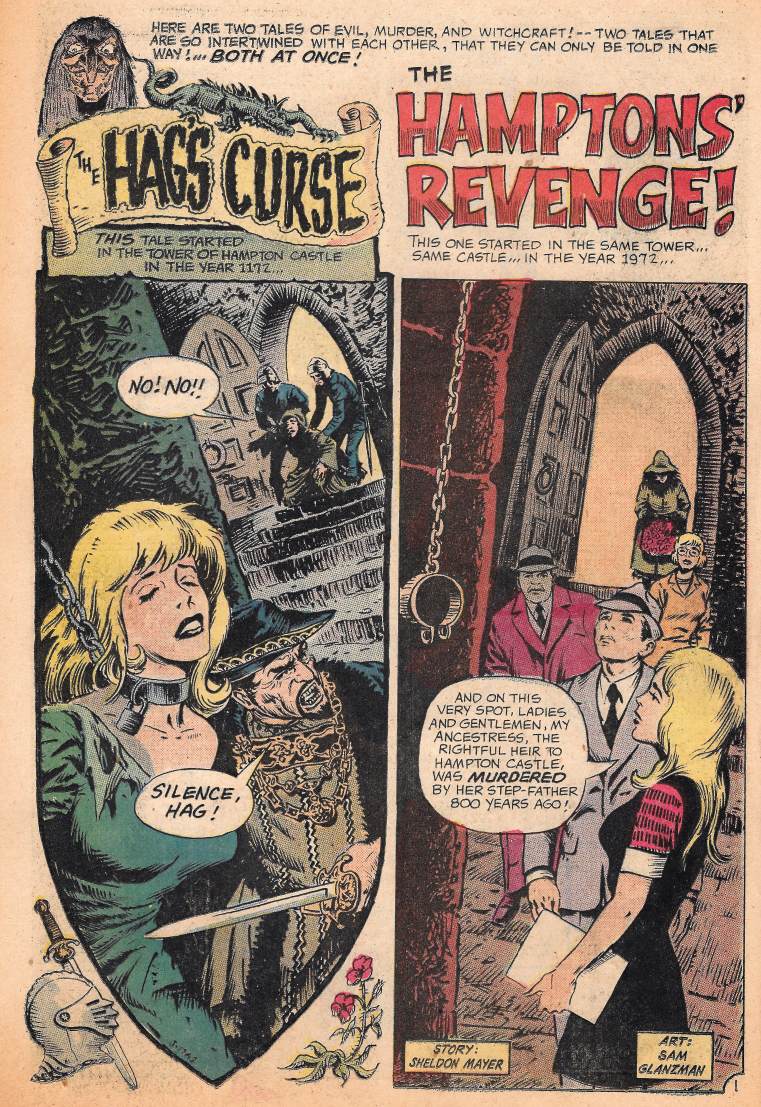 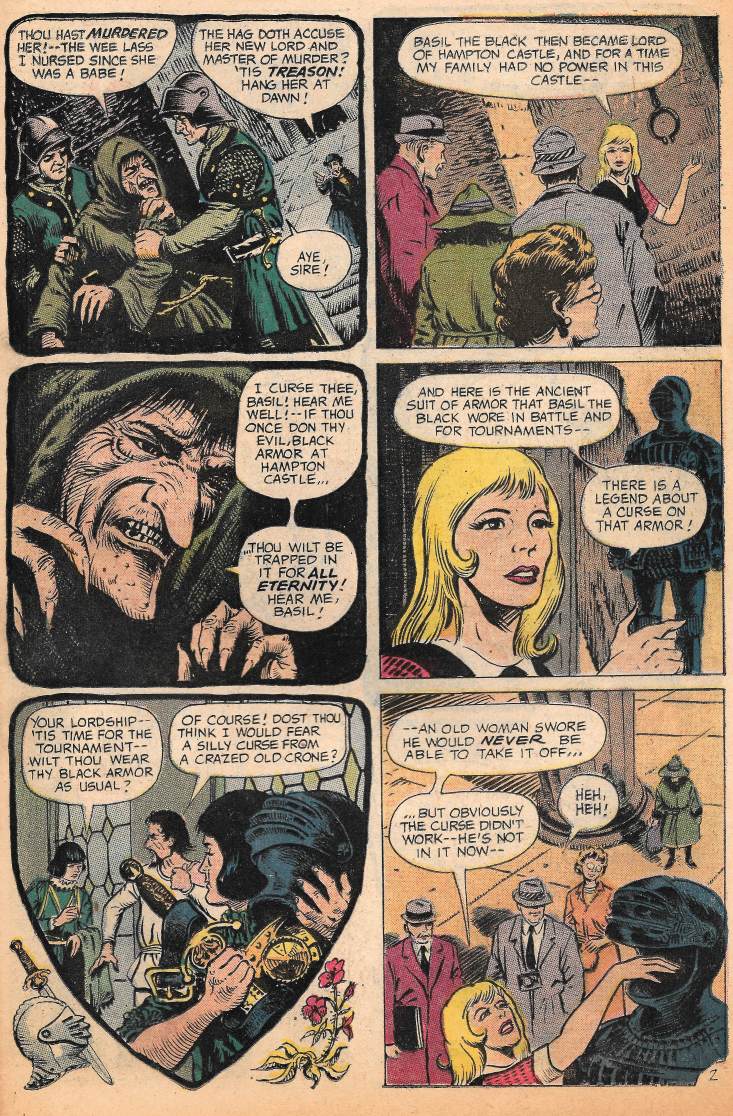 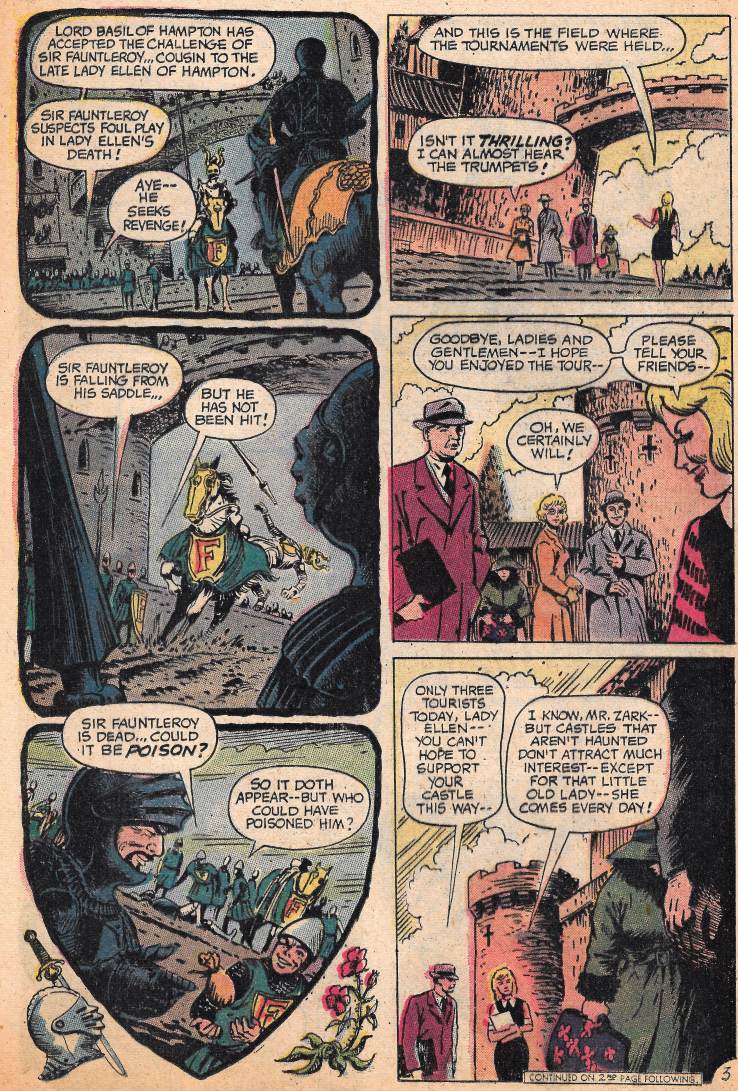 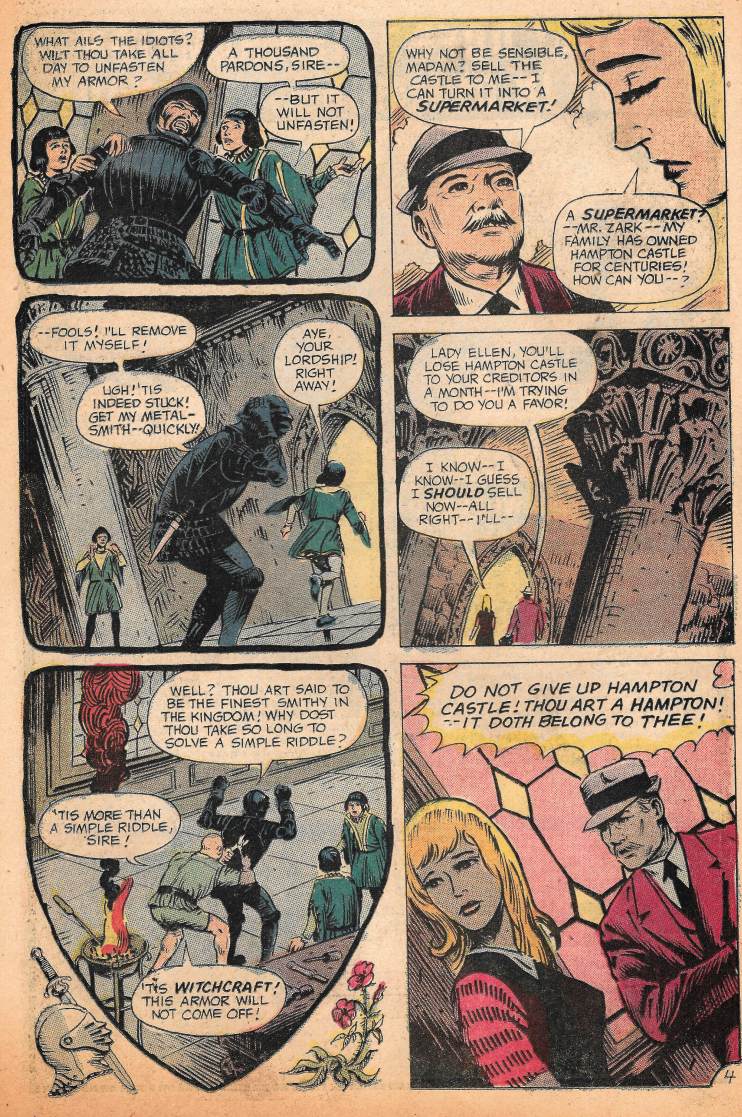 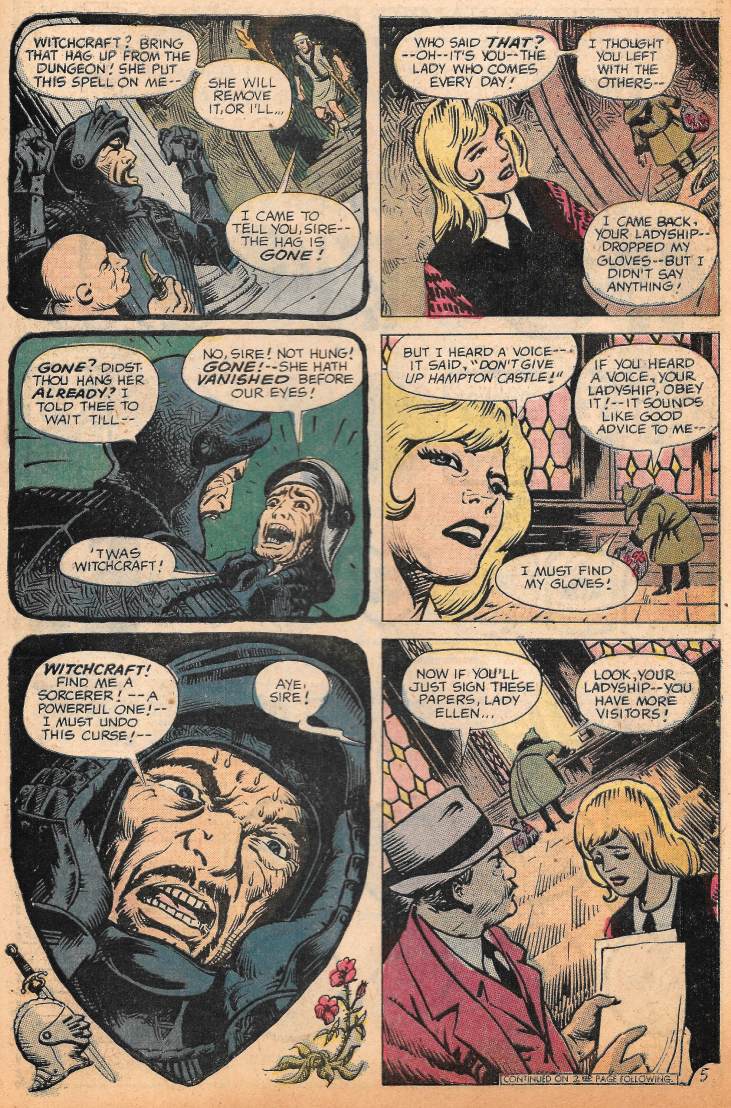 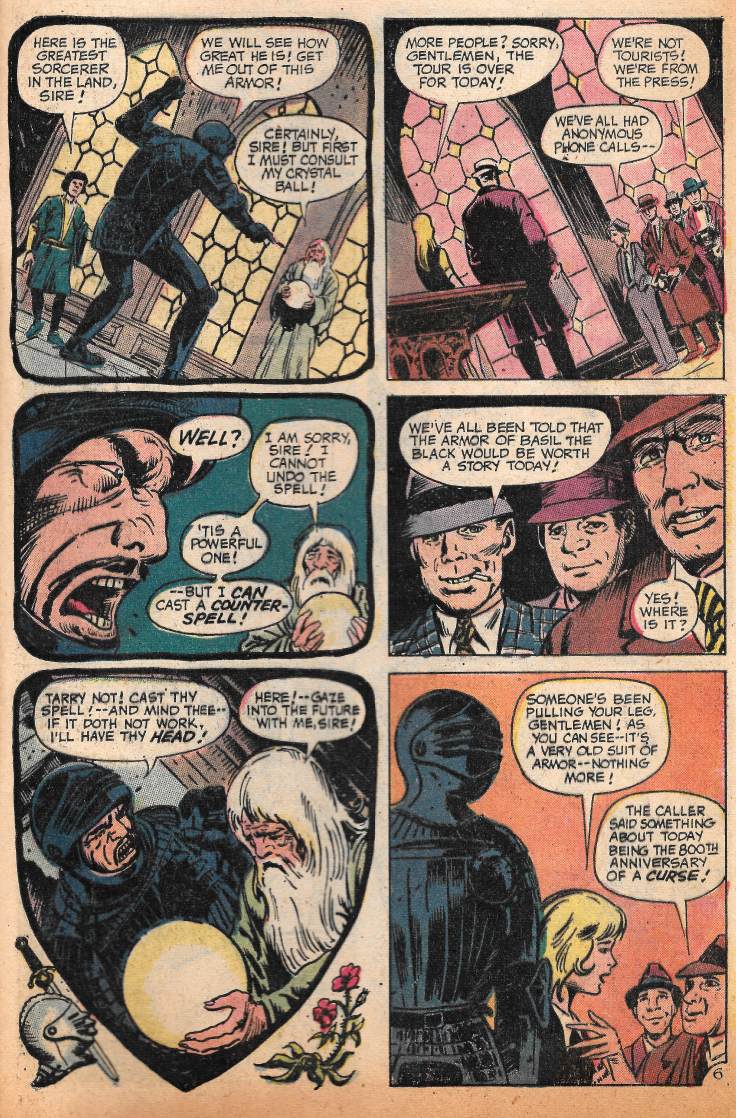 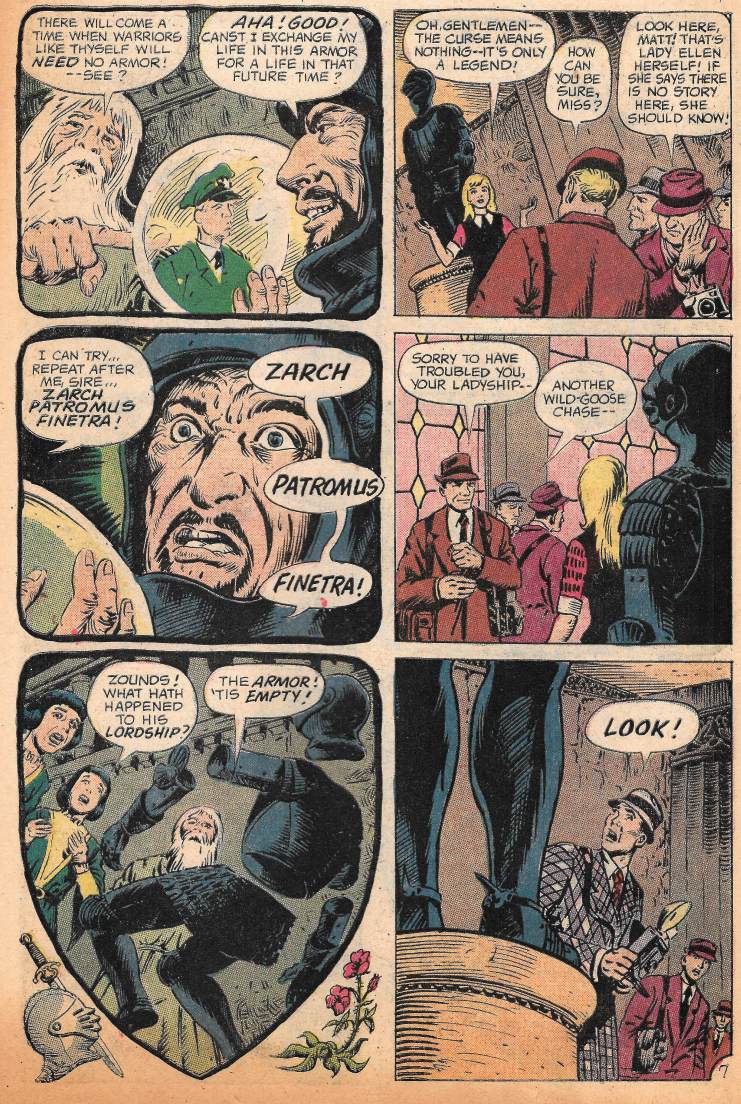 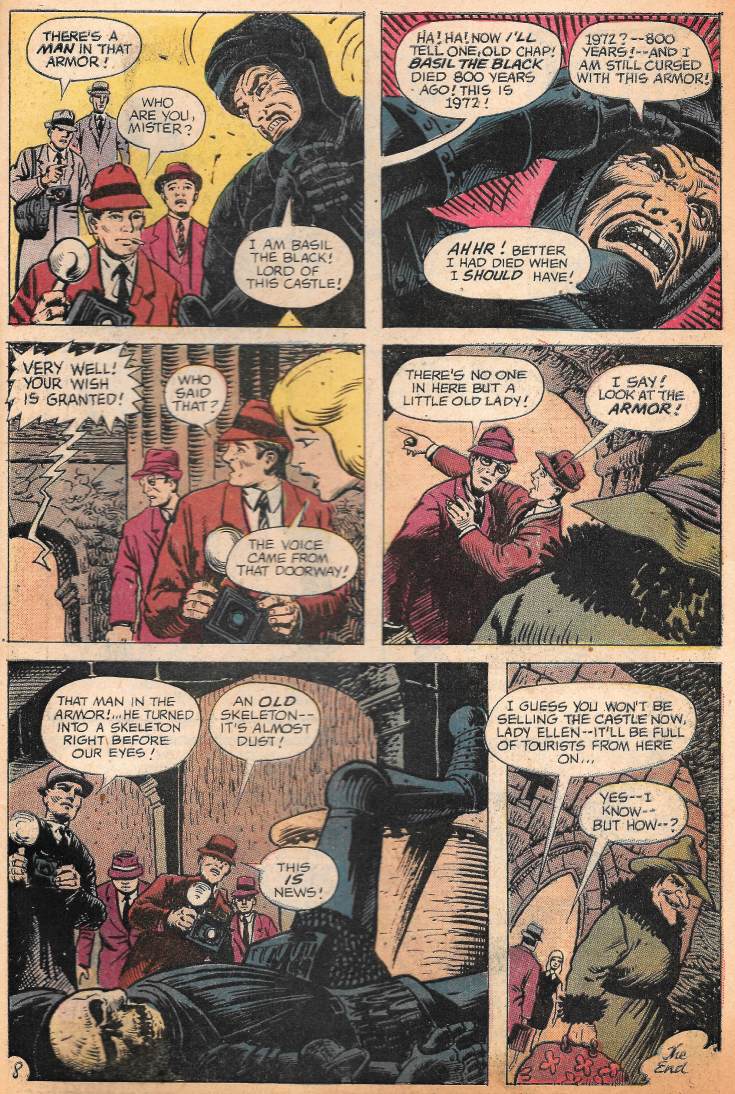 And there you have it: a month’s worth of horror ending with a nice tale that puts this meal of scares and terror to its proper ending. I trust you’ve had as much fun as I’ve had.

If you must know the truth I’m sad to see it go, however there are a couple of really comic-book important movies coming out, so the Crapbox has to move on. Join us as we begin covering Thor tomorrow and I’ll see all of you horror fans Next October.

Till then HAPPY HALLOWEEN and may all your doors give you TREATS and not TRICKS!
Posted by SonOfCthulhu at 3:09 AM