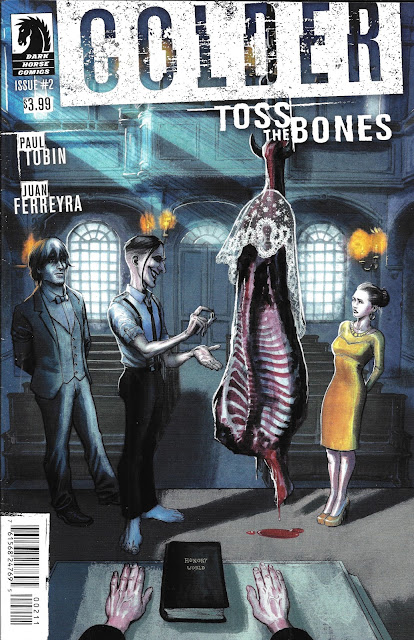 I hate coming in so late to good things.

Colder definitely appears to be one of those good things. There are three volumes of Colder: the self-titled initial series, a follow-up subtitled The Bad Seed, and then Toss the Bones. The title "Colder" refers to the lead character, Declan Thomas,  a fellow with some extreme problems.

Declan started out a refugee of an insane asylum that had mysteriously caught fire. He had a couple of peculiar traits. First off was that his body temperature was falling, with the tagline of the first series being that once it reached zero, he was a dead man. The second being that he was able to move between our reality and a crazy parallel Boston known as the Hungry World. Somehow these trips let Declan help others more insane than he was, but he also ran afoul of an entity known as Swivel. All of that sounds amazing, but I have none of those issue to find out if the series lived up to the promise that summation conjures up.

What I do have is this issue, which picks up the tale as Declan and his girlfriend Reece are accosted by a new threat, a being from the Hungry World known as Nimble Jack, who makes the Joker look like the picture of sanity. Nimble Jack has followed this pair to our reality. And what happens next is a special horror tale that I should let tell itself.

See Nimble Jack can affect things in our world, but either he can make himself invisible or he’s only visible to crazy people. I can’t quite make up my mind as to which, but these opening scenes with him finding a way of creeping into their apartment by knocking on the door… 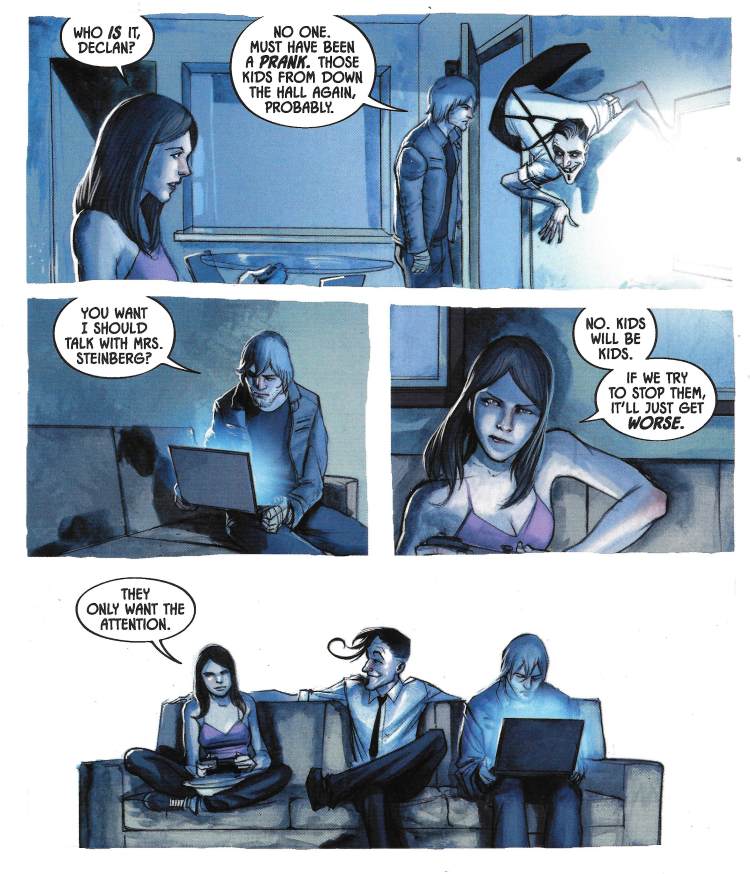 …and then slithering in when Declan opens it.

There’s great subtext going on in the dialogue that points out elements of what Nimble Jack is up to in taking this slow-moving approach. His ultimate goal is Declan’s death, which will bring him power, but tactics include actions that seem more geared to unnerve and frighten. And that makes him all the more disturbing.

Check this out as an example. Declan lost the fingers on both hands in fighting Swivel and while discussing seeing about a prosthetic hand, Nimble Jack conjures crows for no apparent reason. 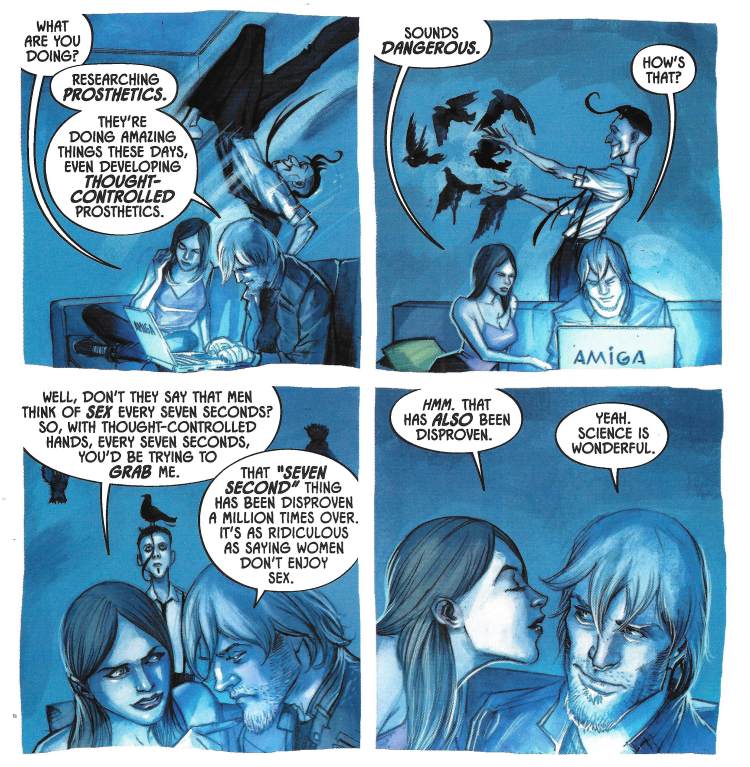 As this talk of sex leads to our couple heading to the bedroom, Jack plays little games with the light switch to undermine Declan’s faith in his sanity. 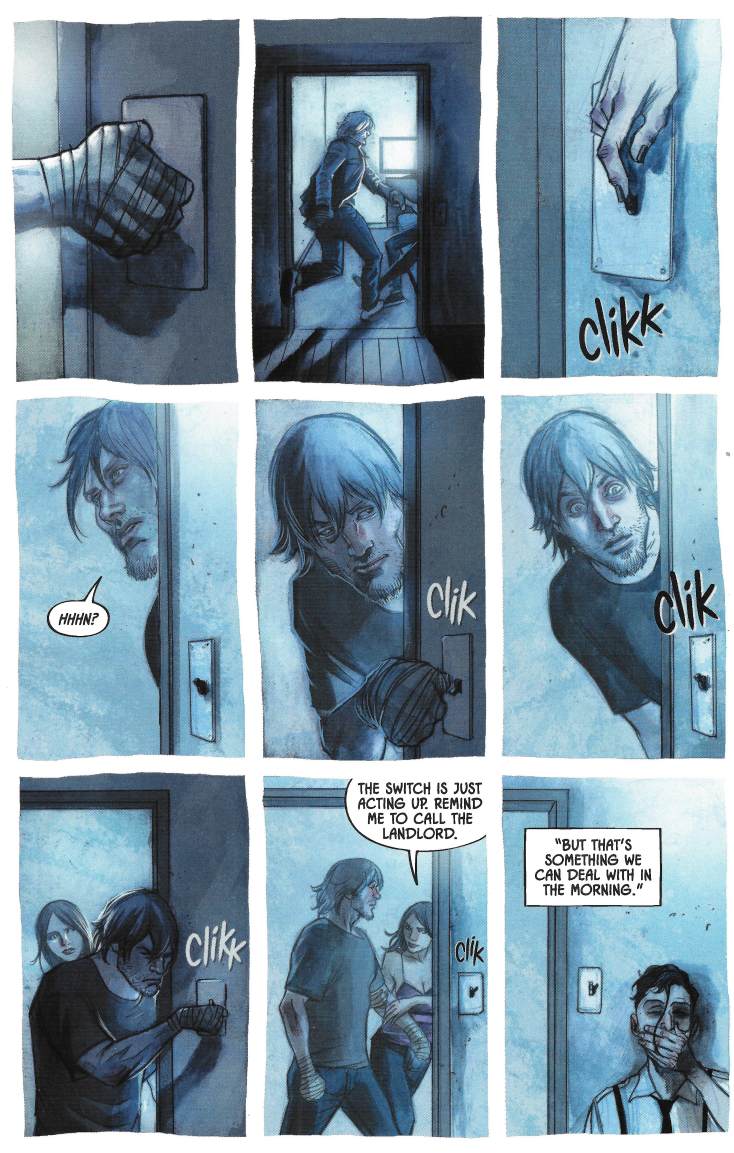 And this shower scene with Declan’s girlfriend the next morning is sure to give someone the willies. 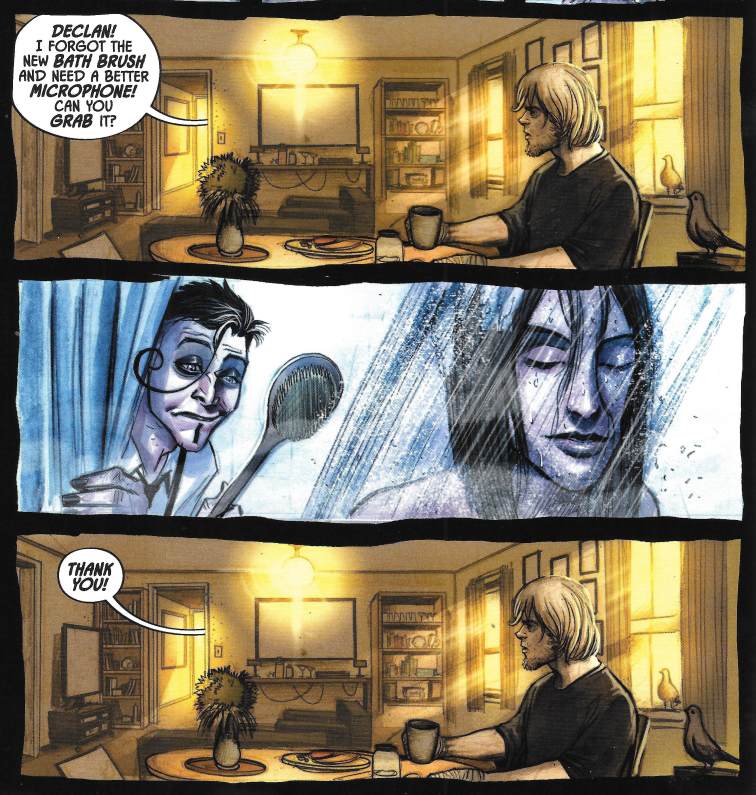 These two appear to genuinely care about each other and for a guy with Declan’s messy, insane past that means this girl must be special. Pages like this make me want those other two series even more. 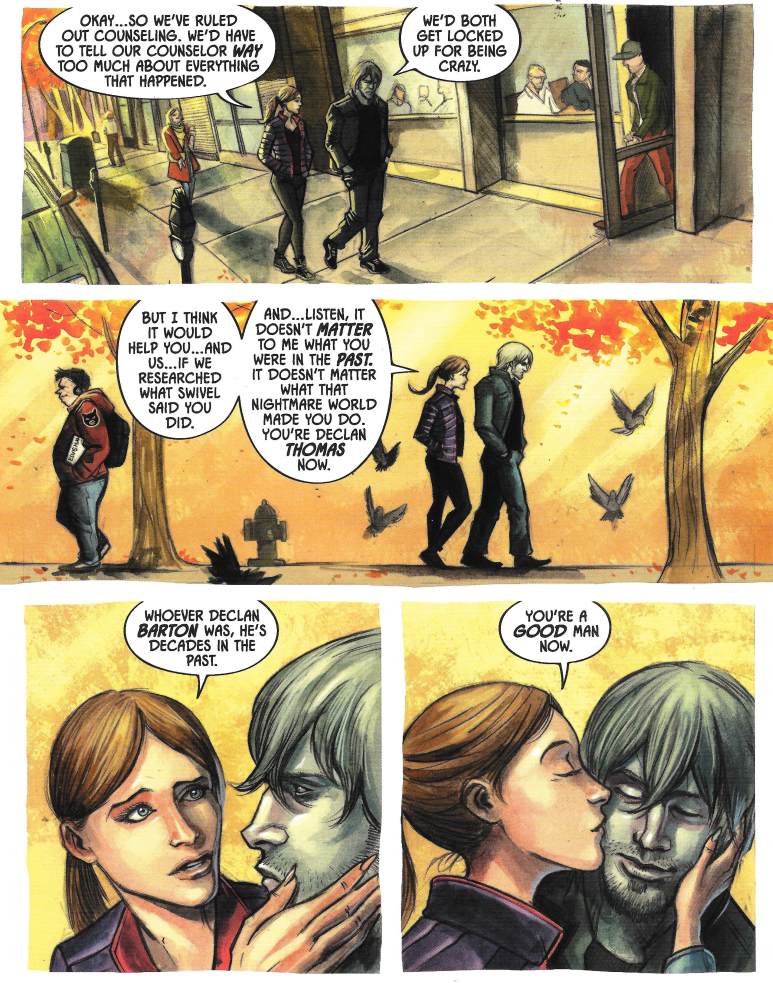 While Reece and Declan split up for the day, Nimble Jack finds a crazy person digging through garbage in an alley and here’s where the story enters threatening and dangerous territory. Seems Nimble Jack can be seen, again I don’t know if this is linked to the victim’s insanity or Jack’s wishes. 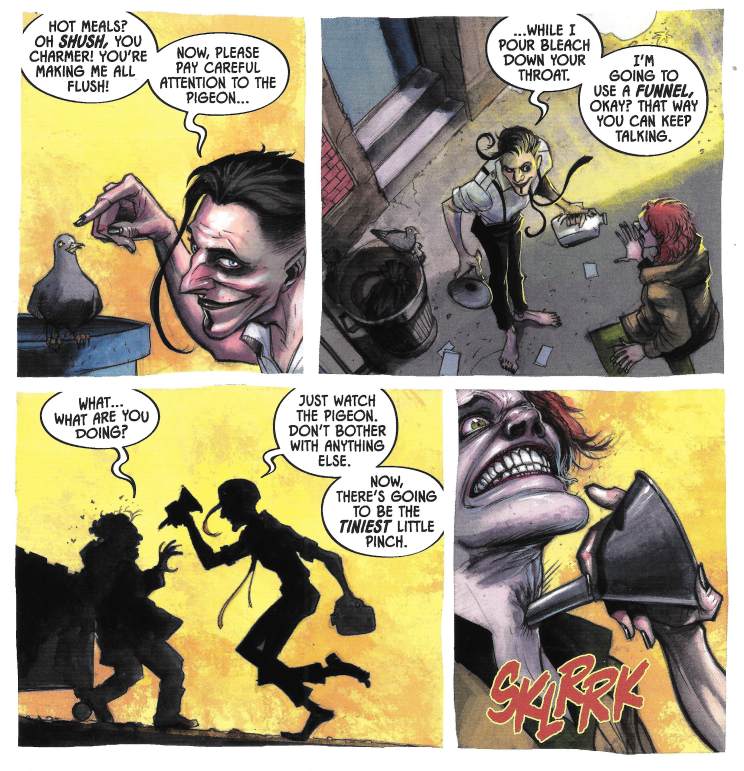 And I do mean victim.

Nimble Jack and the Joker could go a few rounds on who’s craziest contest and I’m not sure who would come out ahead. This definitely kills the crazy hobo, by the way. And the results of their death are quite surprising. 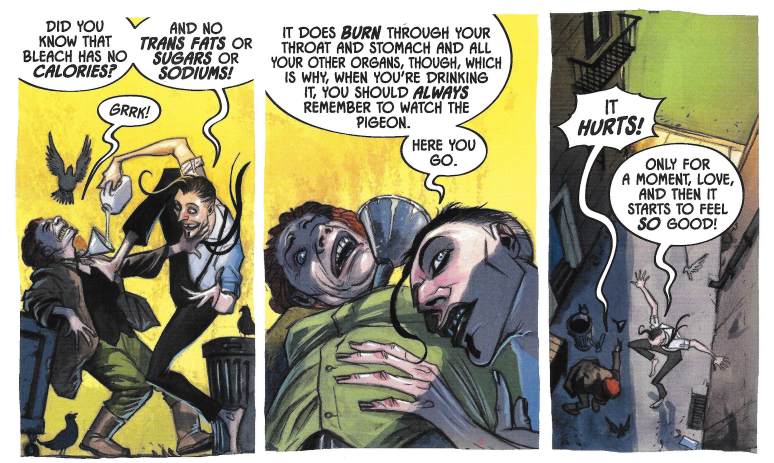 Appears Jack can distill their craziness into convenient pill form… 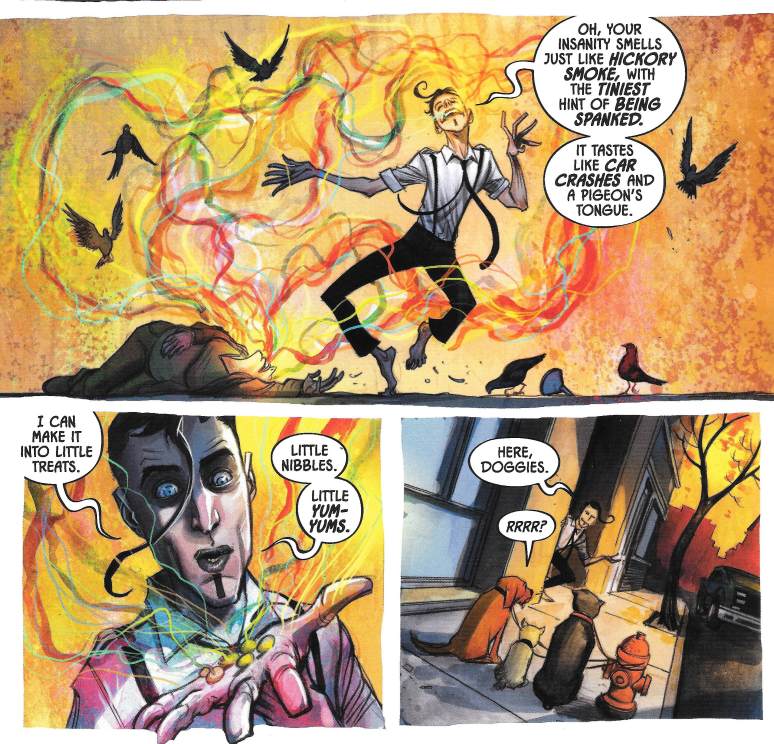 …and pass it along to others. In this case, three innocent dogs. Which doesn’t end well for them. 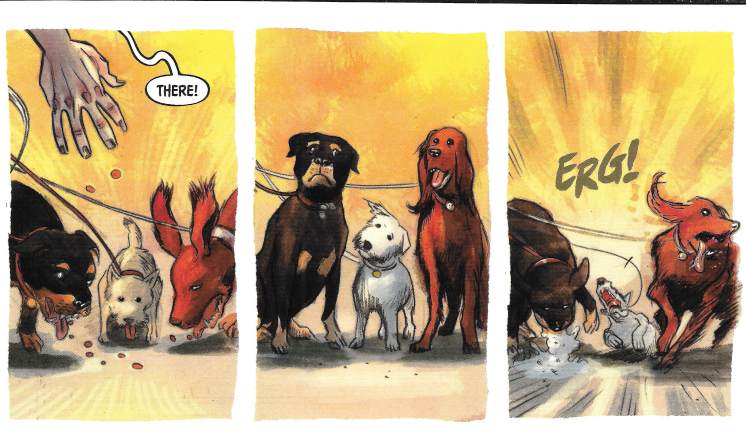 One ends up dead of head on collision, … 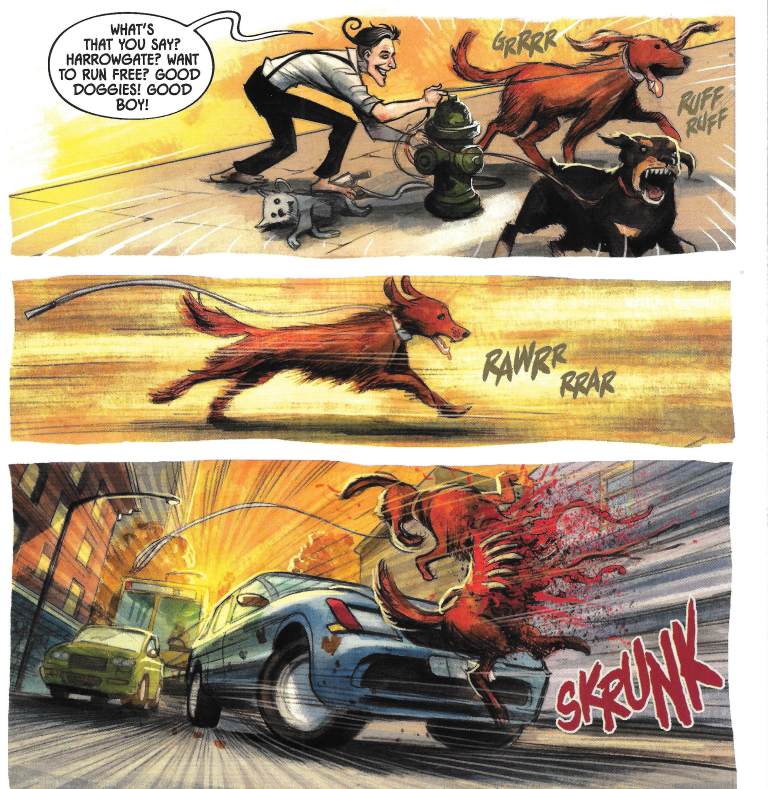 The next is shot to death for attacking an on-duty patrol officer, … 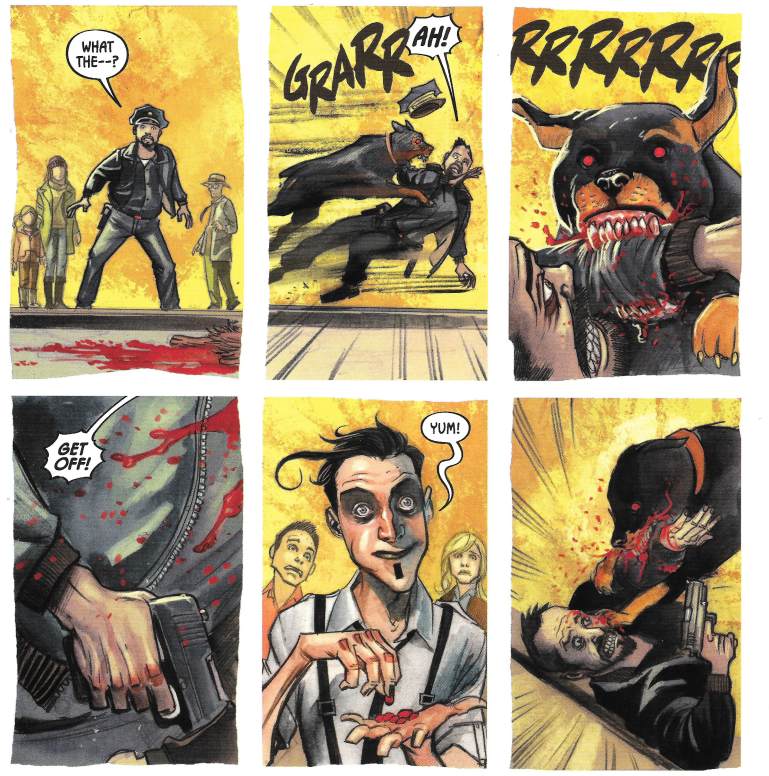 But the third is the worst. It leads/draggs a small child into an open manhole. Think falling to your death is bad? 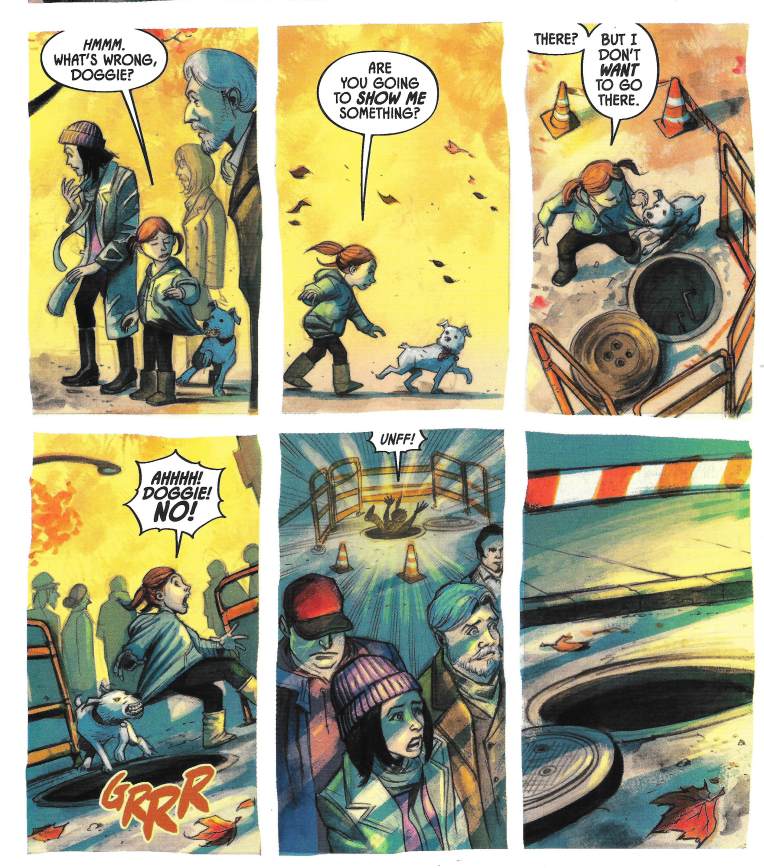 It probably is, but that isn’t this girl’s fate. She takes an unfortunate trip of the Stranger Things variety into the Hungry World, where she is quickly surrounded by hand-dogs (I don’t know what they really are. You describe them. They freak my shit OUT!) 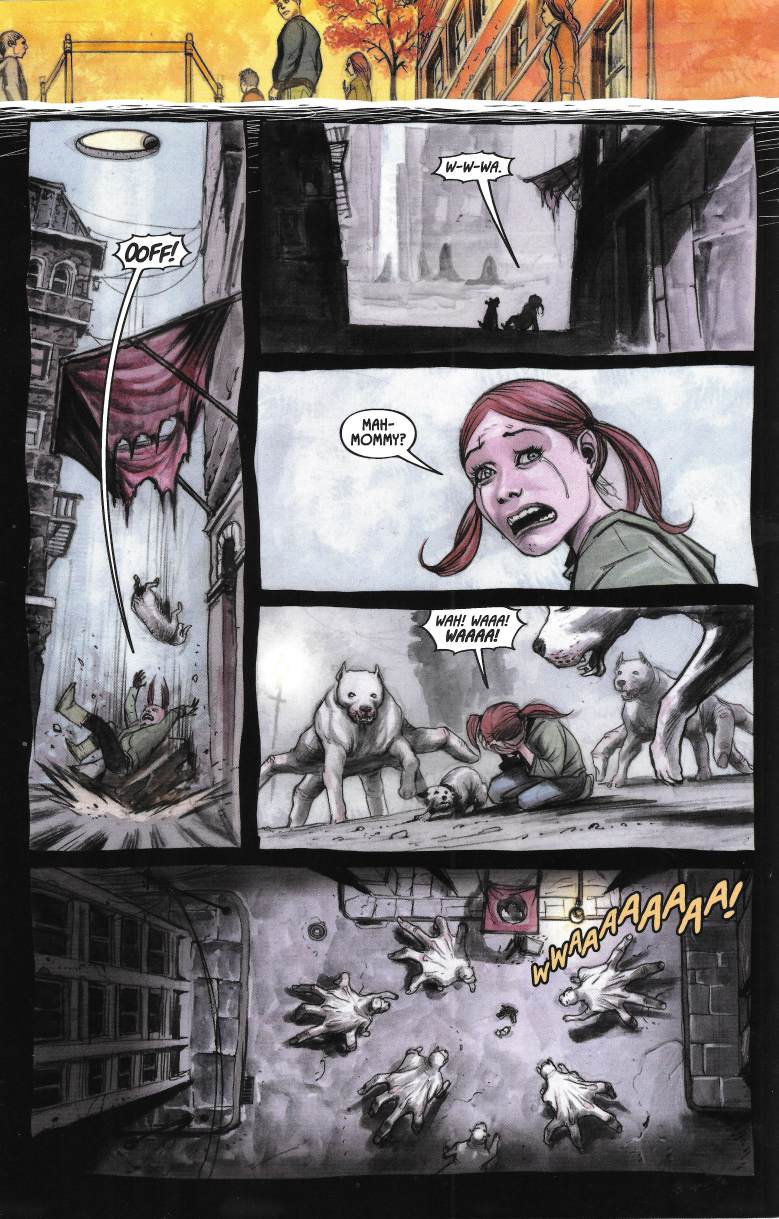 Jack seems rather pleased with himself, even to the point of approaching Reece’s friend at work. I hope she doesn’t take one of those pills. 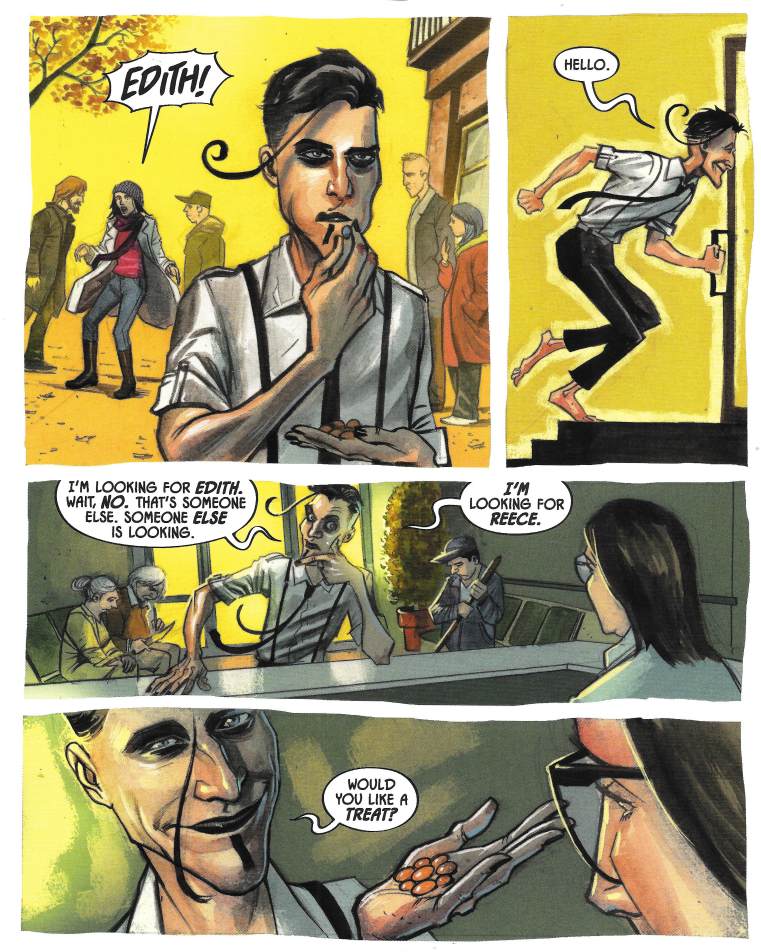 Appears Reece is a counselor, and as her friend rings her at Jack’s insistence, we get this odd bit of dialogue from the troubled teen she is in therapy with. 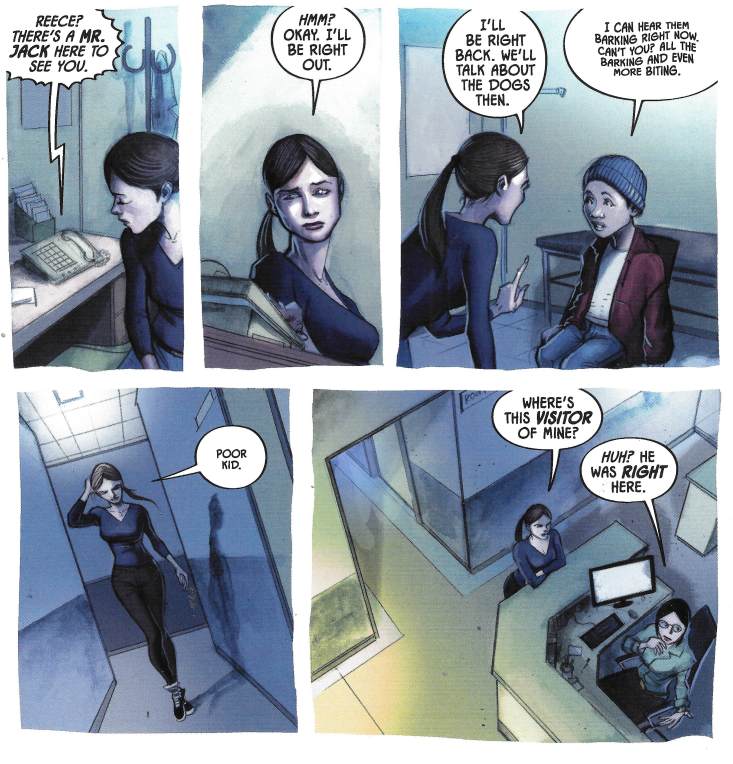 Edith isn’t being eaten, but Jack appears and pushes through the throng of blood-dripping hand-hounds to bring someone for the young girl to keep company. 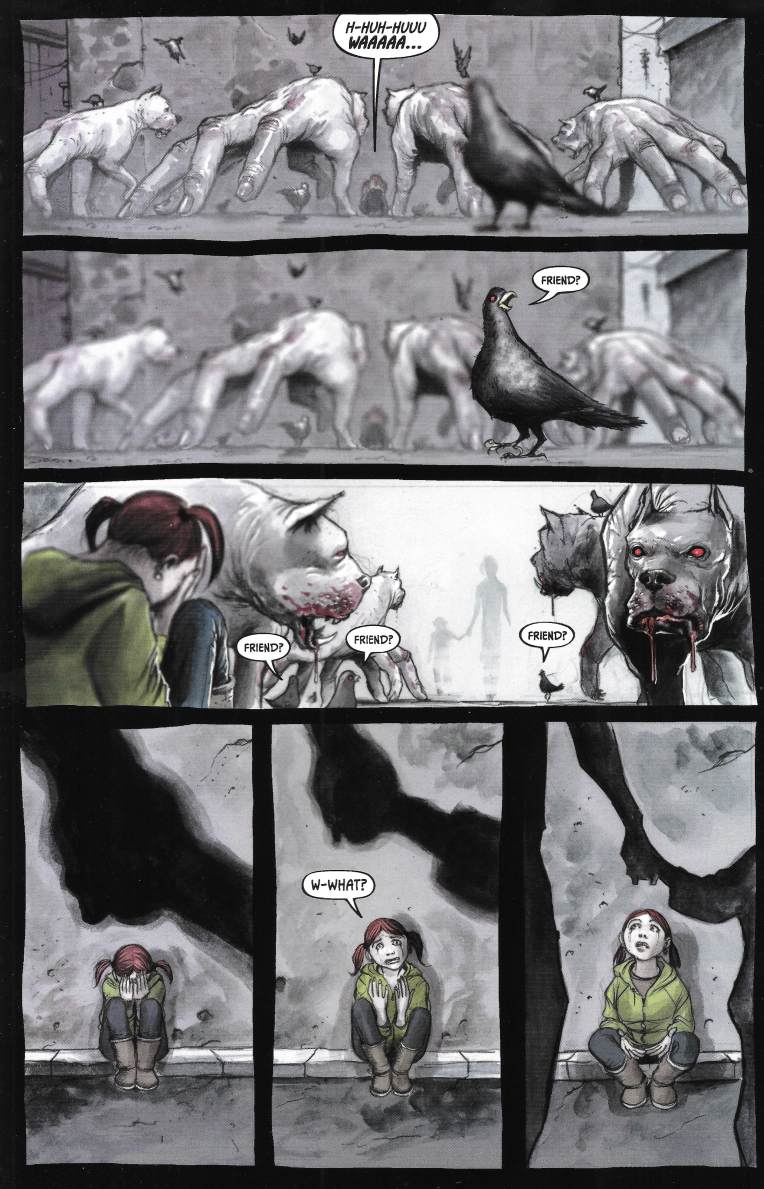 Yes, it’s the young boy from Reece’s office and the menace level is ratcheted up even more. 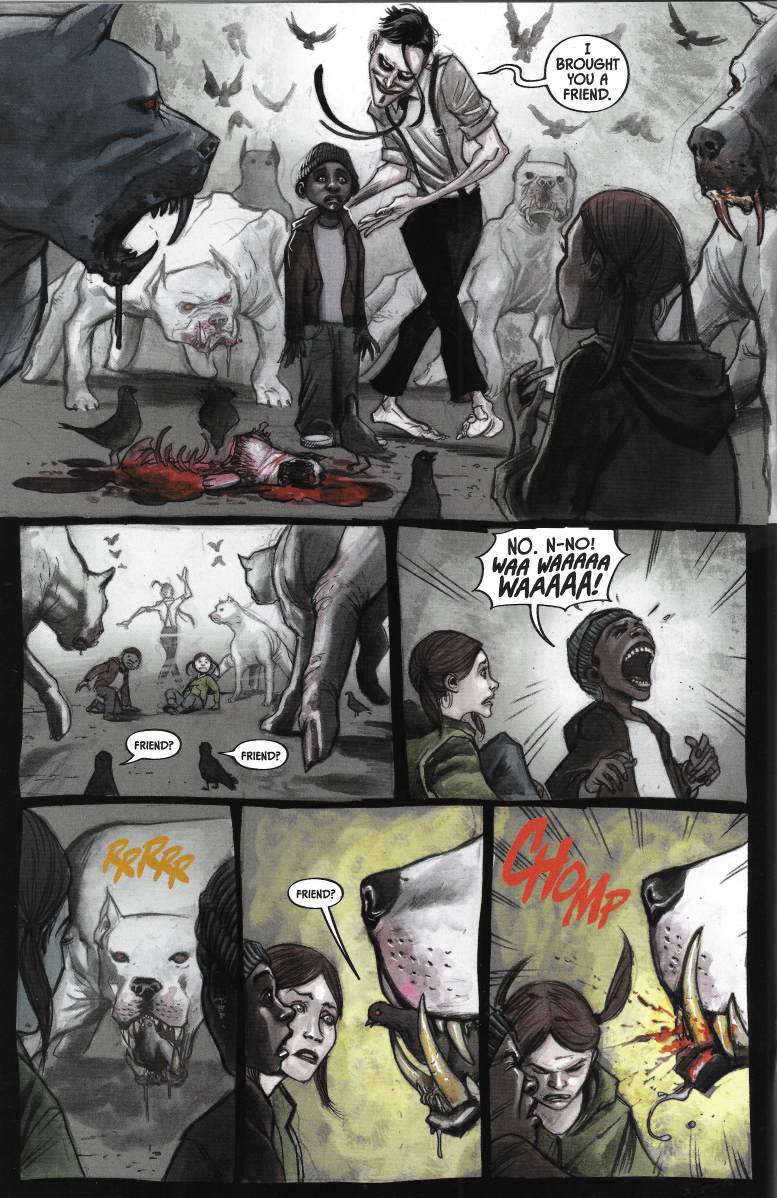 And as Reece and Declan meet for lunch, Nimble Jack’s covert attacks on their world start to become more and more clear. 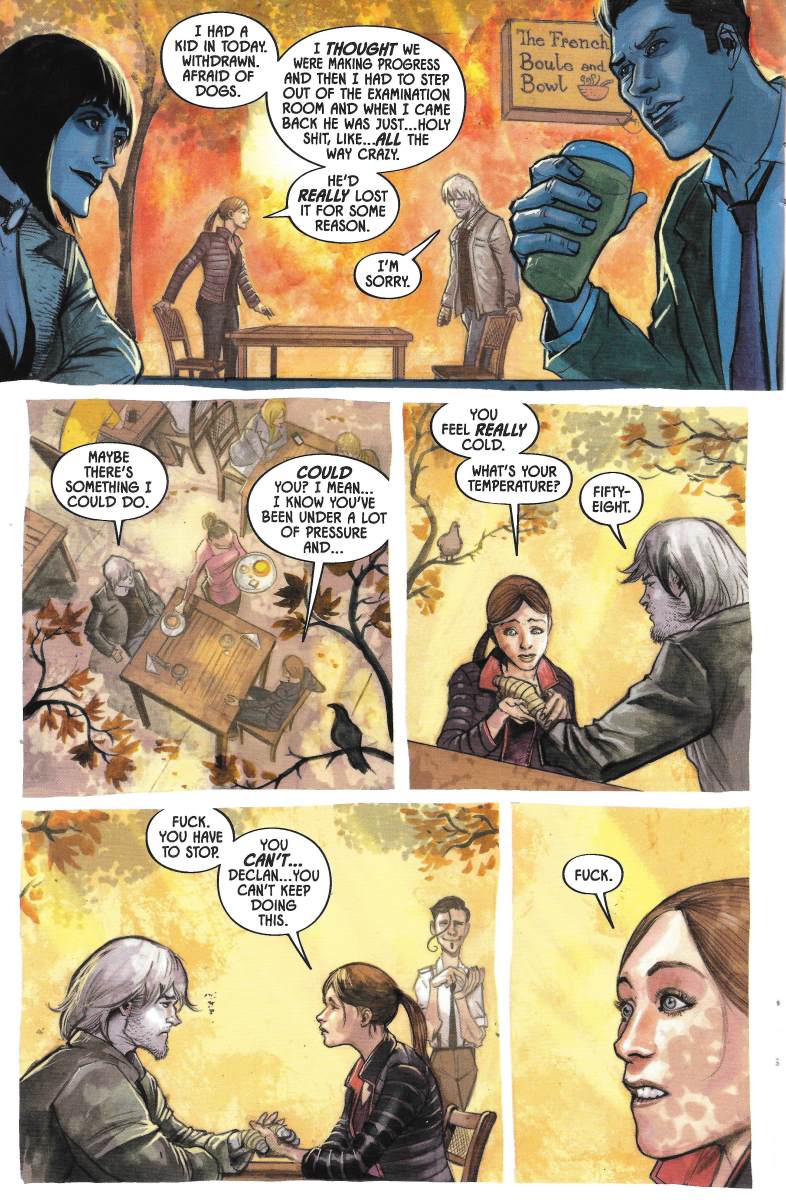 They start to argue over whether Declan is a positive influence on Reece’s life or not, while Jack looks on with grave interest. 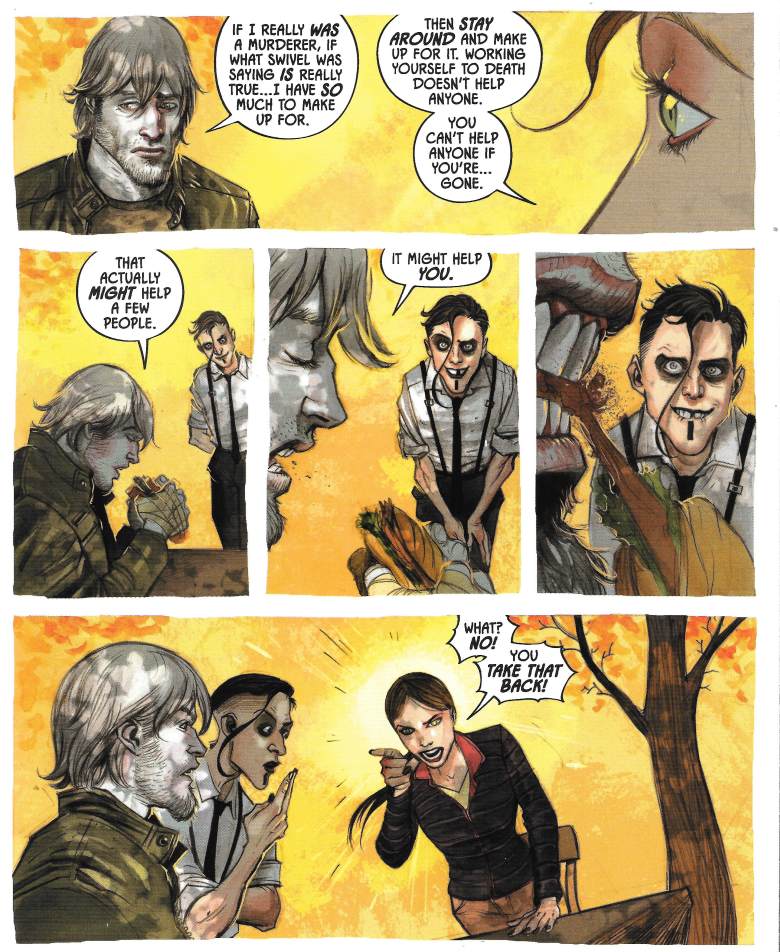 And then they realize that Declan didn’t hand Reece the shower brush that morning and the insanity enters into their normal existence once again. 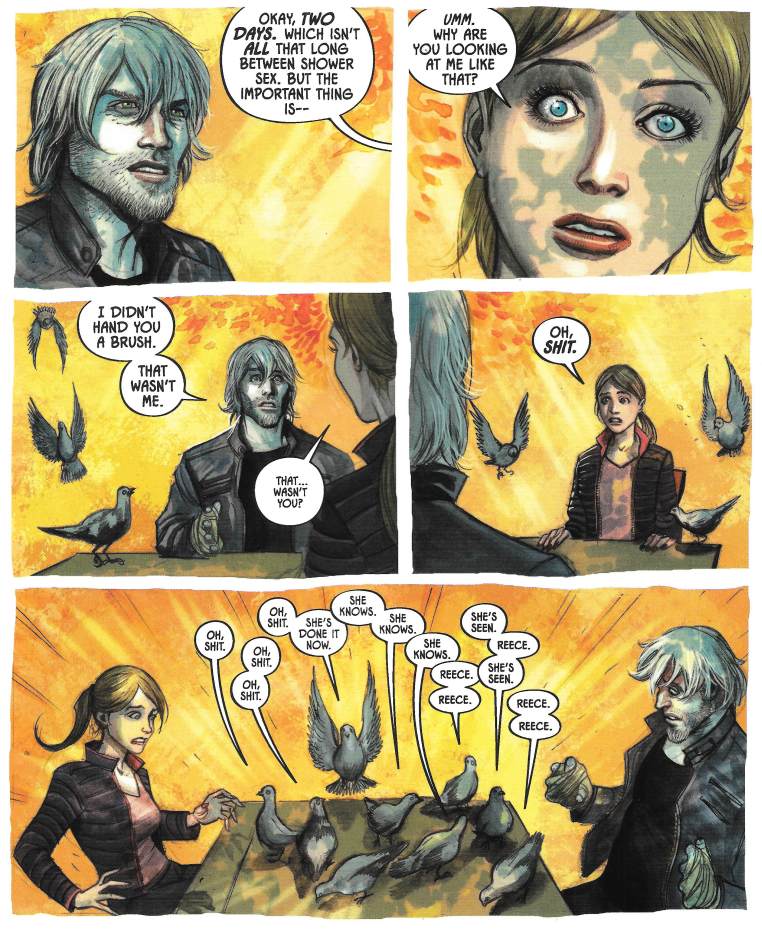 Insanity that means they have slipped into the Hungry World, where Jack is already waiting for them. 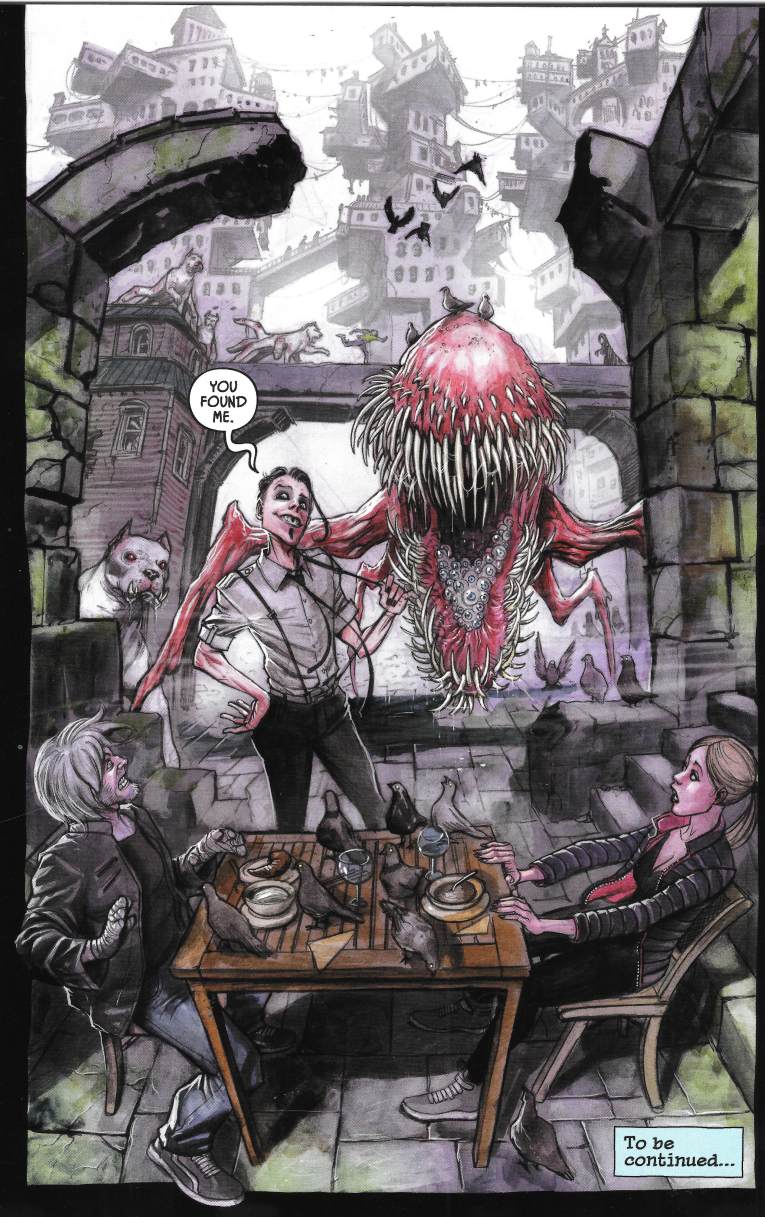 The right parts creepy and inventive, I can easily see why this warranted an Eisner nod. The art is grand too, with the painted colors adding so much to the backgrounds. If you see any of the Colder series in the bargain bins, do yourself a Halloween favor and snap them up.

Posted by SonOfCthulhu at 5:07 AM