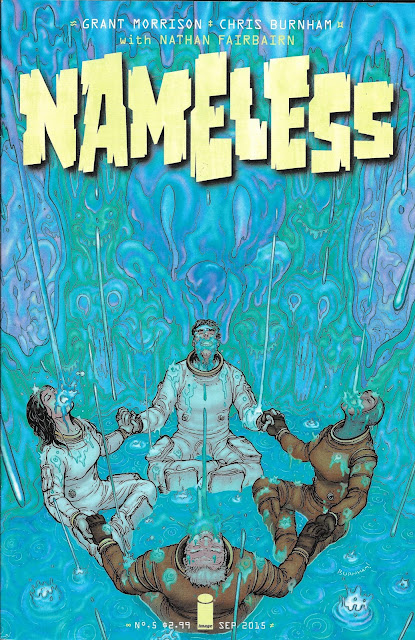 Last two years of doing scary reviews around Halloween I would wait and post THE scariest book on October 31st. This year will be a little different. I have a few shocks and surprises left, to be sure, but this is it. This is THE top of the heap that came out of the Crapbox this year.

Nameless is a six issue series from 2015 that I really wish I’d found all of. I’ve scanned several other reviews to obtain the backstory to fill you folks in on, only to find that the connective tissue that writer Grant Morrison used to hold this tale together isn’t just thin. It’s downright intangible. The story hops between present and past indiscriminately, doing its level-best to keep you off guard and off-kilter. The ride it creates with this destabilizing tactic turns terrifying and tragic as equally as it unsettles.

If Lovecraft wrote for comics in the 2010’s, perhaps he would have come up with something this good.

Near as I can discern, our plot involves a mystic who has forgotten parts of his past. He can’t even remember his own name. Hand chosen by an eccentric millionaire, our hero without a title is sent off in a space ship to investigate an asteroid headed for an impact with Earth. An asteroid that might be a hunk of the solar system’s fifth planet. And it shows signs that it was at one time inhabited…and perhaps still is. Whatever it contains spells doom and madness for the entire human race, unless Nameless can stop it.

None of that comes through in this issue, which is what we get for arriving five issues late to the party. We do learn why and how our hero lost his identity, though. There is almost a complete story in this issue, but there is also some of that jumping around to the present space mission where the intelligence overwhelms the crew investigating the asteroid. Those maddening images that are so dramatic and confusing but effective and chilling.

So, if you’re prepared for a rough journey, strap in. It WILL get bumpy as we go.

We start in a Doctor’s office, with our protagonist covered in monitor leads and waxing poetic about mankind while the doctor fills a syringe. He’s not very complementary of us. 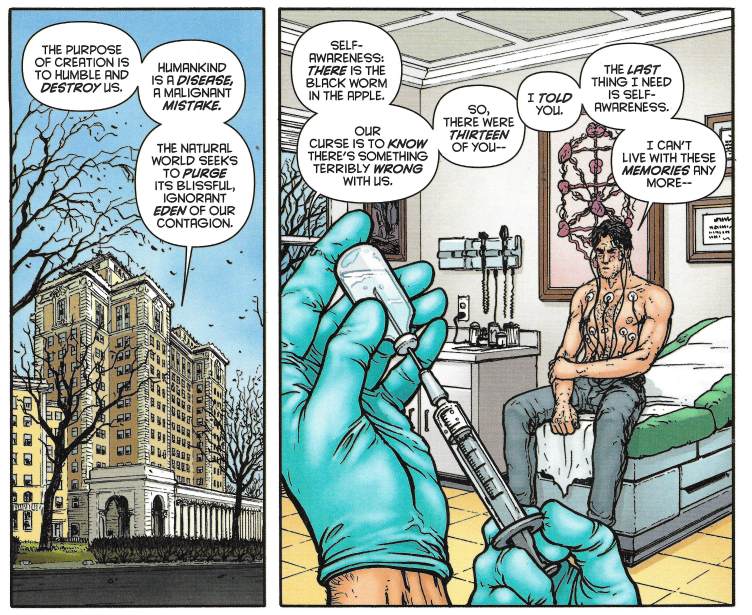 And why should he be, after what he’s been through. We flashback to that event in the recent past. It occurred on Halloween, of all days. 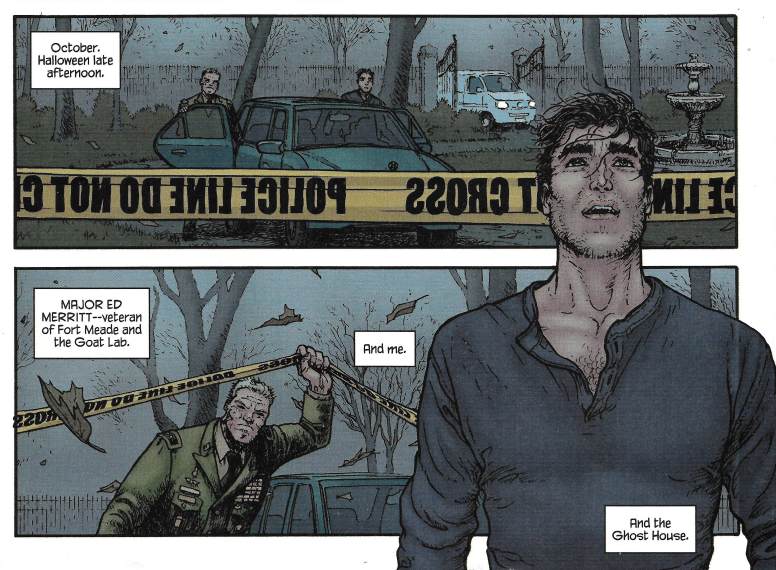 And it occurred here, at Ghost House. 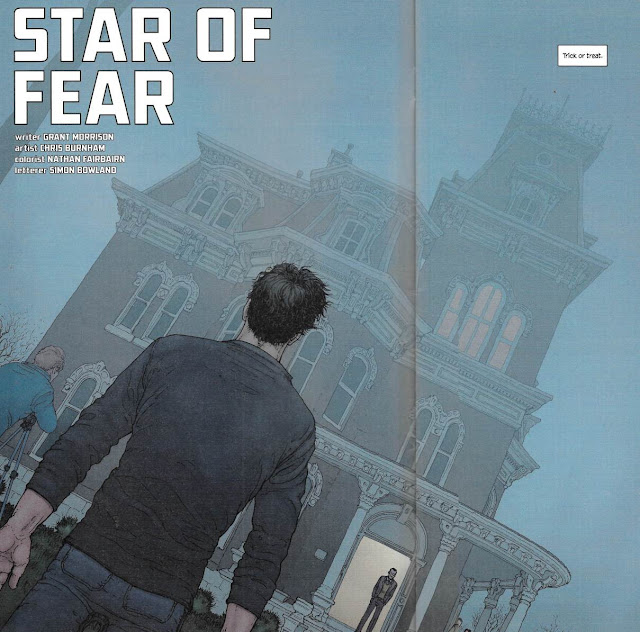 Ghost House is currently without an owner…and by currently, I mean within a few hours of its prior owner being gang-banged to death in jail.

The place is now crawling with government-types and the paranormal investigators they’ve brought with them. Along with this item retrieved in the basement that will be revealed shortly. It was the object of worship of a primitive tribe who worshiped a moray eel god and did not know what they had gotten their hands on. 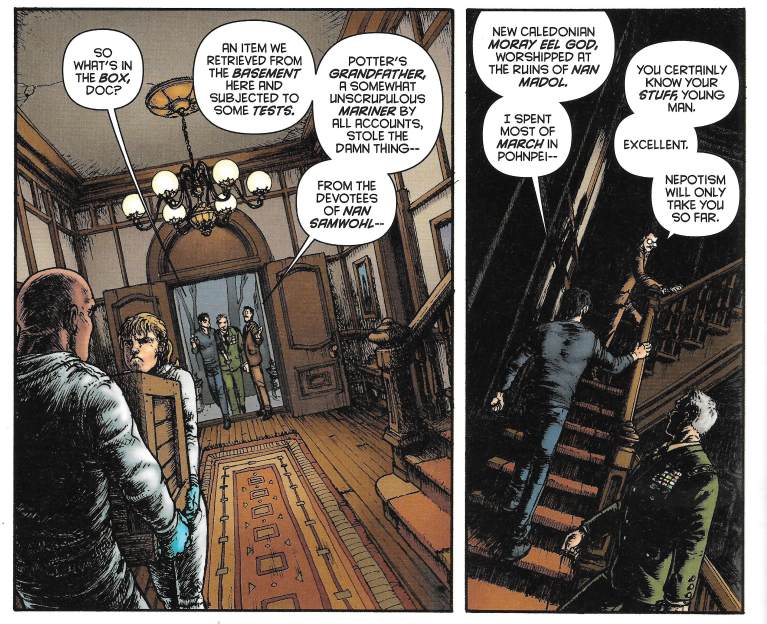 The item was stolen from them by the prior owner’s grandfather years ago and is the source of his madness and ultimate demise. He is continually referred to as “the Potter Boy,” which yes, brings up Daniel Radcliffe images whenever they say it. At least until they juxtapose them pictures of why the Potter Boy was in prison. 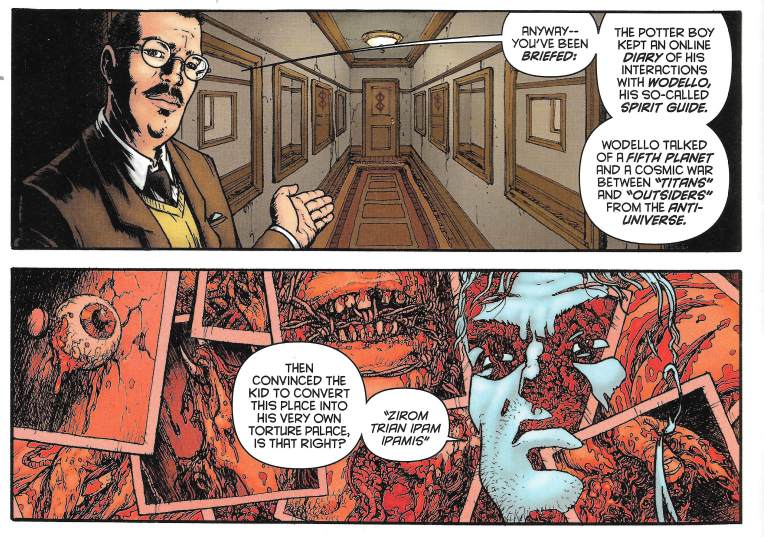 Long story-short, he did something with the object that drove him mad, made him listen to a voice in his head he called Wodello, whom he termed his spirit guide. Wodello spoke of the destruction of the fifth planet in our solar system by powerful god-like beings outside our universe. He then convinced the Potter Boy to torture and murder several people while teaching him an obscure occult phrase “Zirom Trian Ipam Ipamis.”

The book claims this is Enochian for…

Note the placement of mirrors here and how they tend to repeat and bend the image of that door in a way that shouldn’t exist in nature? Well, that’s all part of what is to come.

Also note that we are on Very familiar ground here. Dead languages. Ancient cults. People curious with the paranormal. Gods that exist outside of time and space. Veils that when pierced lead to madness and murder. Unnamed narrators revealing things through flashback. The complete and utter destruction of humanity by supernatural forces of an unkind and uncaring universe.

Oh yes, we’ve been here many times before with one man as our guide: Howard Phillips Lovecraft. Certainly more gruesome than his work, more explicit, but nonetheless the same unease permeates this story. Hats off to Morrison, I suddenly don’t know if I want the rest of these. Moore’s Neonomicon gave me trouble sleeping for several days. A complete run of Nameless feels like it would the same.

Moving on, we get word of why so many are gathered here. 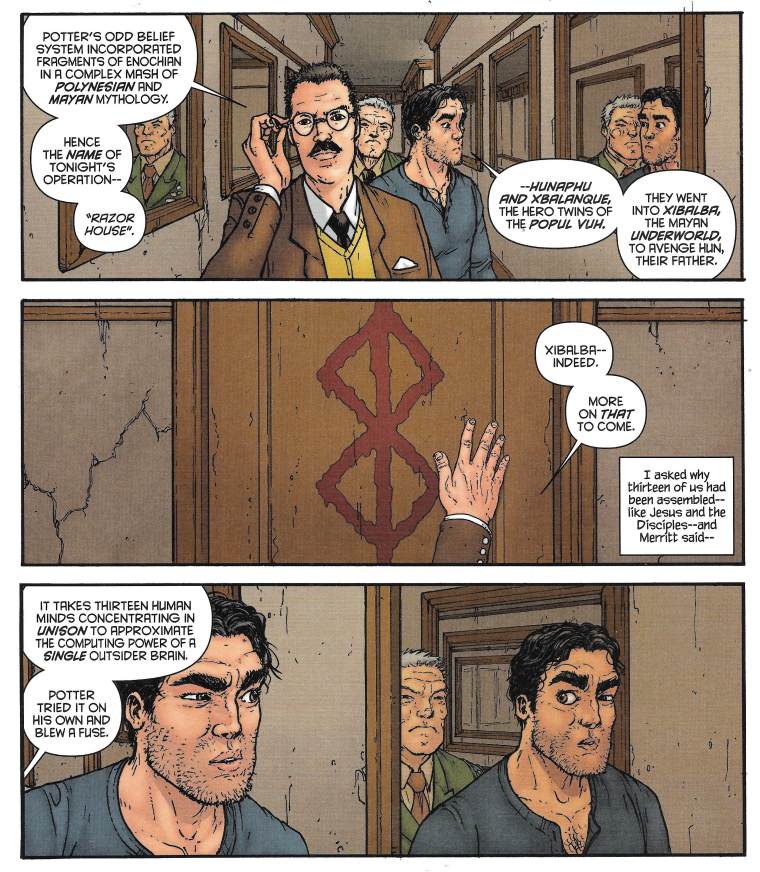 Appears the government believes that Potter went insane because he just couldn’t handle the connection with the mental entity he contacted. So, like every government everywhere, their idea is to throw more minds at it. I think most of us would believe that would make you end up with thirteen crazy people, but what do we know?

Let’s get right to the “roll call of the damned,” shall we?: 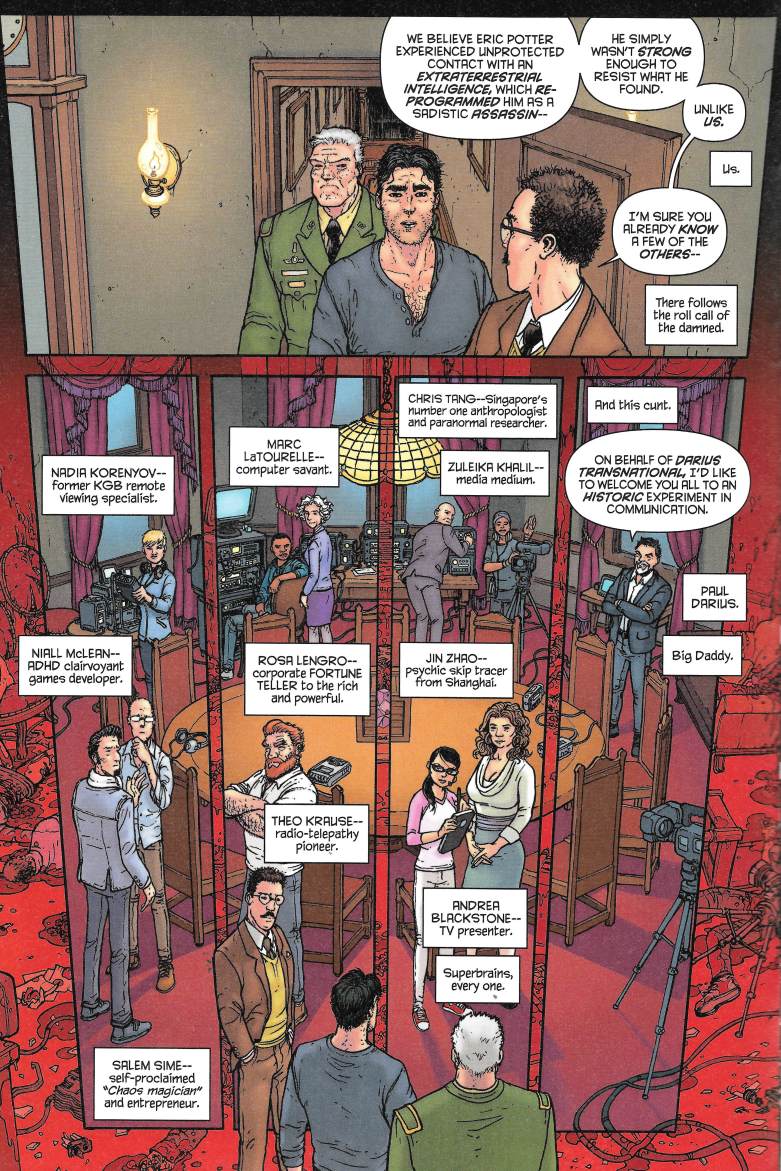 Paul Darius and our protagonist have some history, which I would love to know about, but the book doesn’t go into. While they fill in this bit of background information which starts to feel a little repetitive, but enhances the mood and stakes of this odd séance they are about to undertake, let me step out a bit. 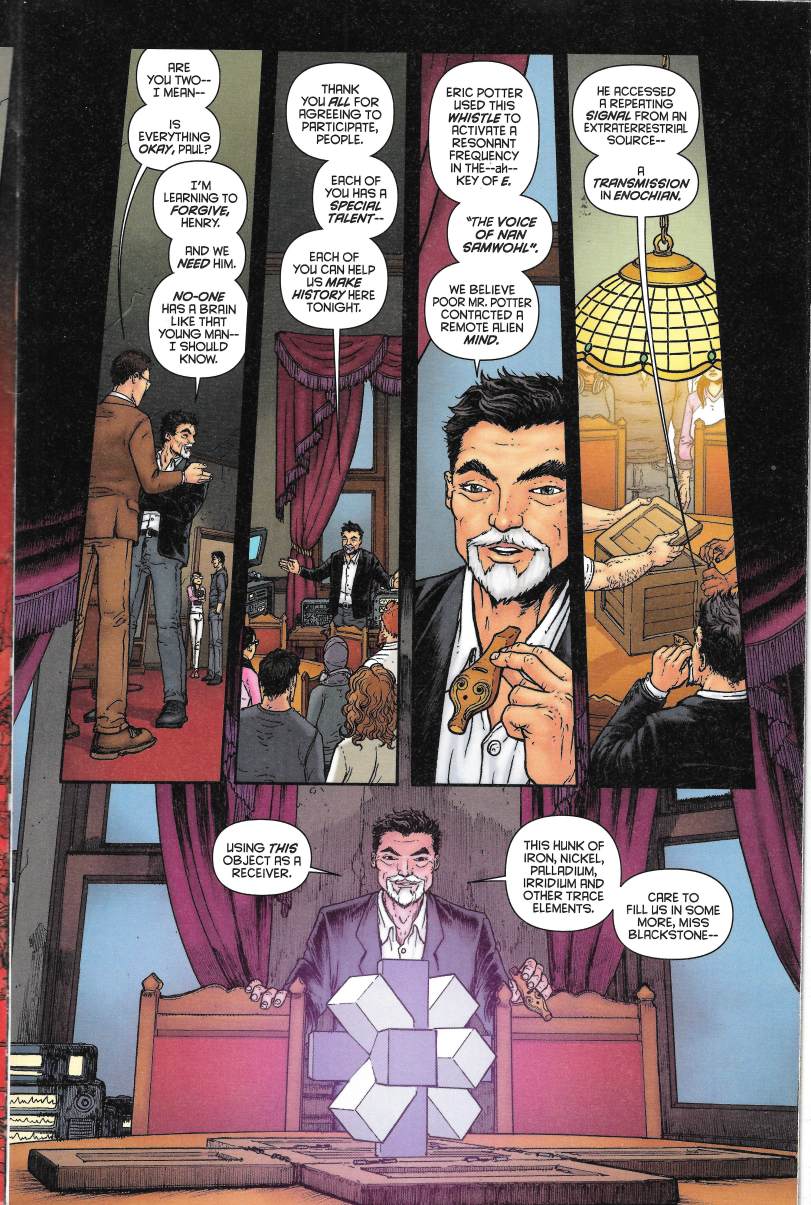 I want to state that Chris Burnham does an astonishing job with the art through-out this book and I would assume, the rest of the series. Even his ordinary scenes are extraordinary, finding ways to imbue each panel with elements and angles that create a disturbing vibe. I’ve read a lot of horror books to distill down to the ones included in this year’s Halloween picks, and there are many that disappoint, art-wise. And in a graphic medium, you need both to properly convey a great horror story.

Now let’s hear a little more about that strange object that looks like a puzzle shape they sold after the Rubik’s cube fell in popularity. 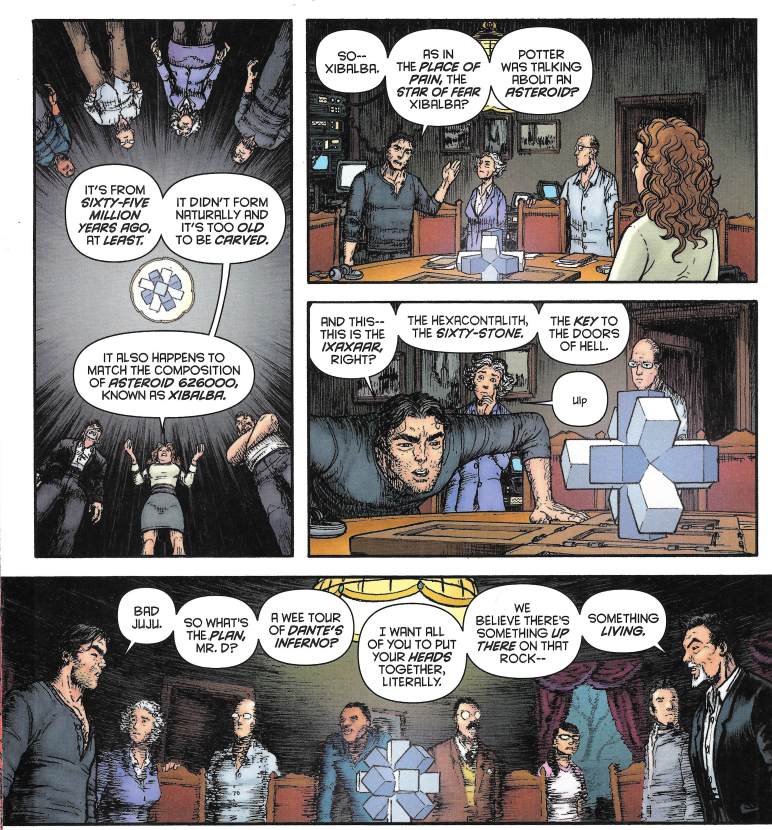 The object is impossibly old and the key to whatever entity or forces exists on Xibalba, an asteroid that will soon come crashing into Earth. I can only place these events now in the near past, as in the current story from issue 1, our nameless protagonist is on a spaceship headed to meet said asteroid. Or something. Nice job on the setup here, though.

Paul leaves and we get a brief moment with the doctor that confirms our suspicions about what will happen next.

Note how Morrison now has us hooked. We don’t know details, we just know the mystery. We have the entire setup, but the natural inclination of the human mind is to find out the exact set of events that lead to just this one man coming out of that room alive. He has teased us with the ending, foreshadowed the tragedy, so much so that we now hunger for that horrible, terrible knowledge.

Great job, Morrison. I guess it is time to get to it.

The leader of the séance tells the history of the fifth planet, pulled from Potter’s notes, and we get a graphic that ties to those mirrors and that doorway into this room. A shape that can’t exist in three-dimensional space, a Escher drawing as a sign of powers beyond our universe’s. 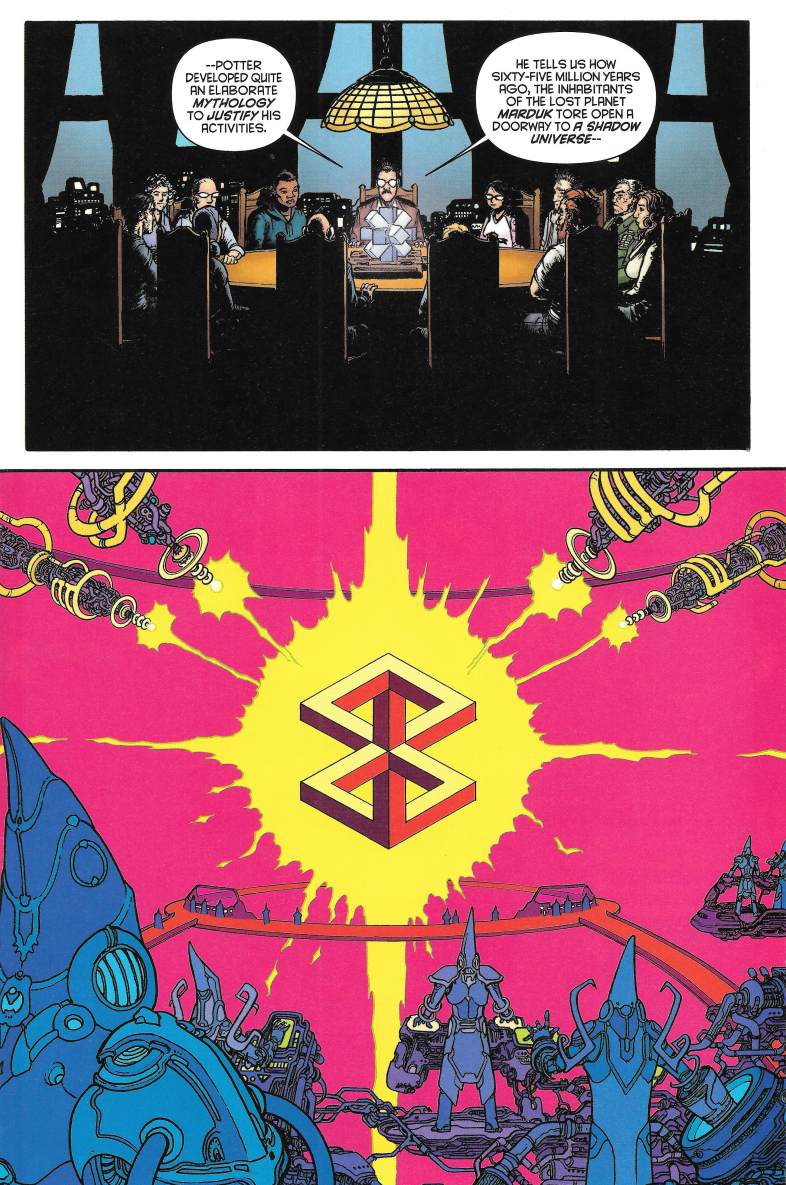 And more. The hubris lead to the destruction of our neighbor’s planet in desperation, an action only partially successful. 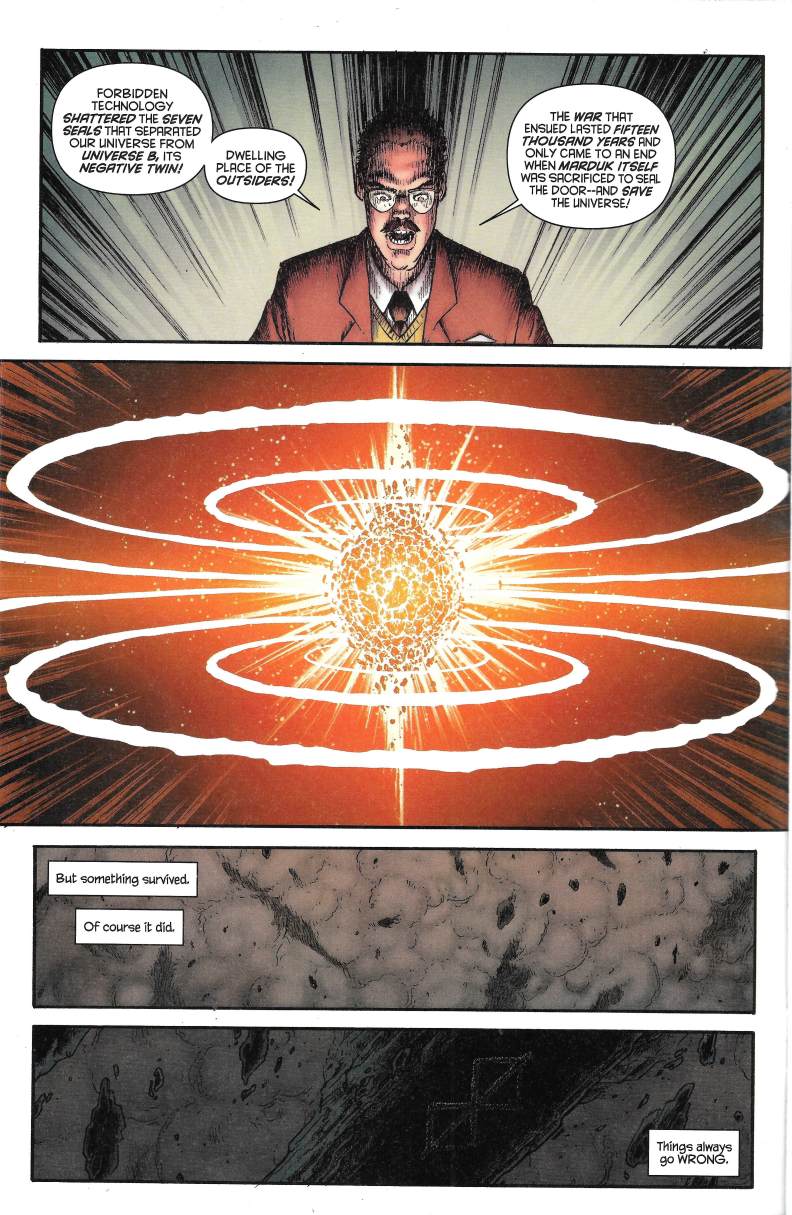 Now things turn into a straight-up horrorshow as the séance begins, complete with spook winds and billowing curtains… 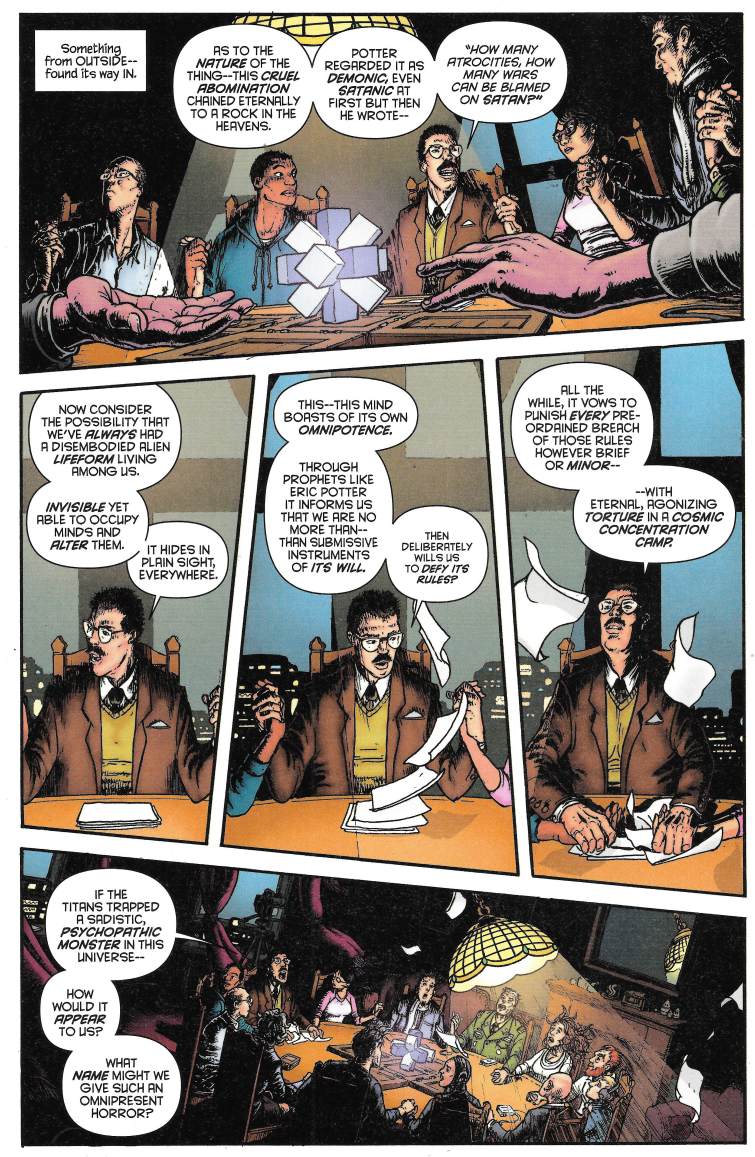 Only our protagonist seems to understand what they may be channeling. 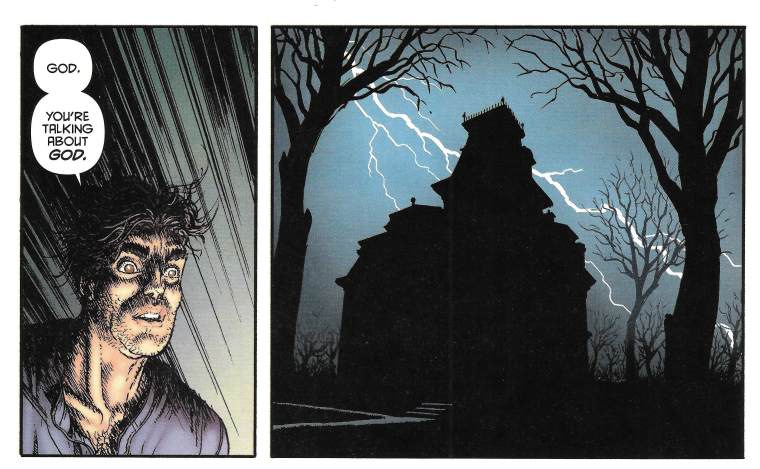 Eff’ing EFFECTIVE! Wow, what a book.

Then an aside to underscore the point.

And back to the craziness with the knowledge of why it will be a disaster and a final note to begin the fateful destruction. 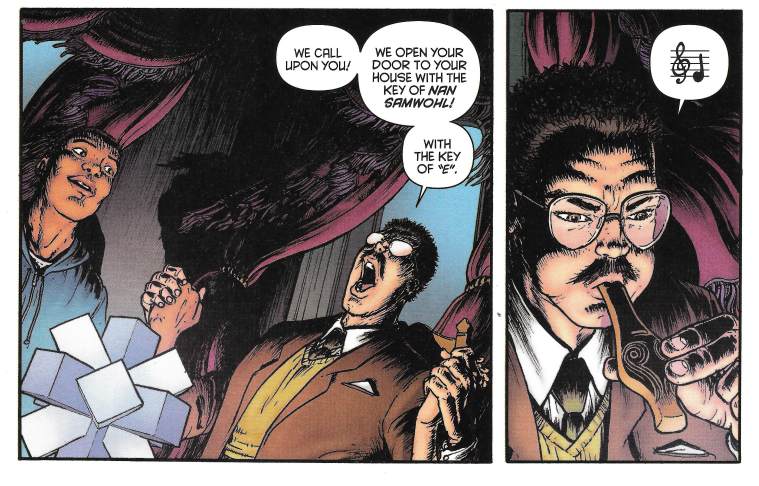 The die is cast and the presence arrives. 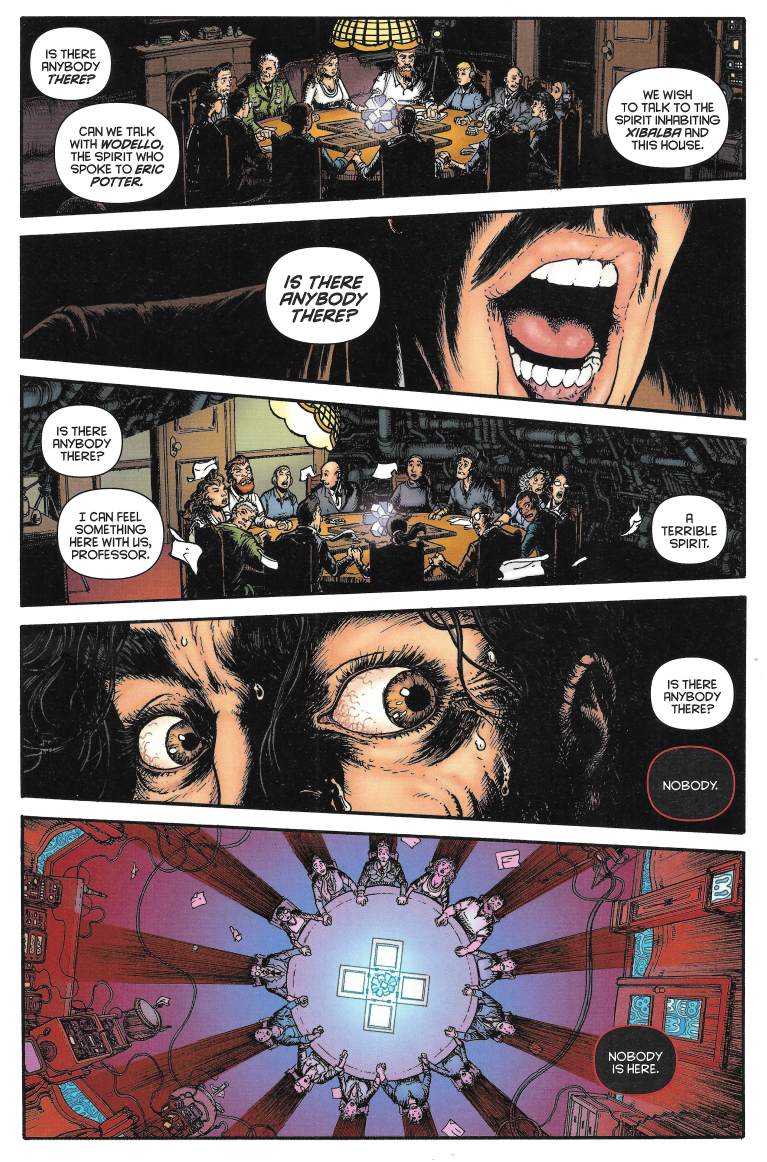 And takes over our protagonist. Inhabits him, much like a hand inhabits a glove. 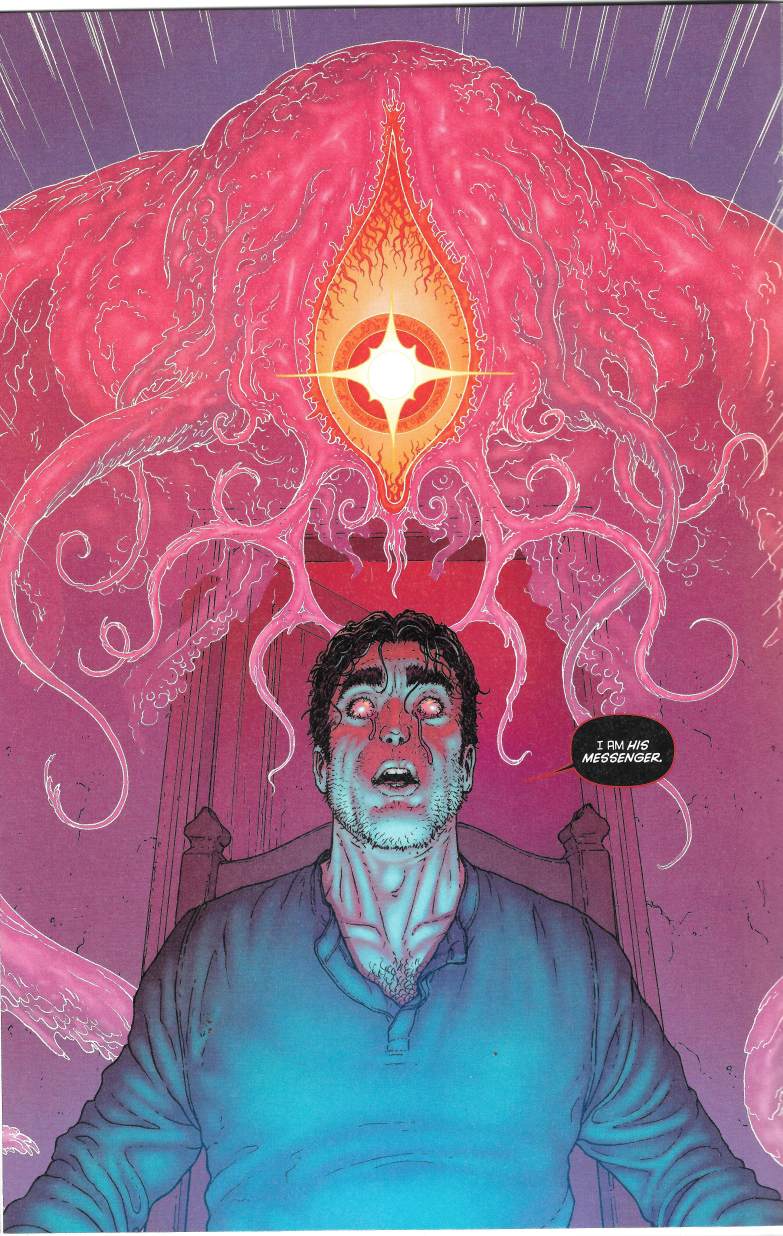 Everyone in the circle will die. 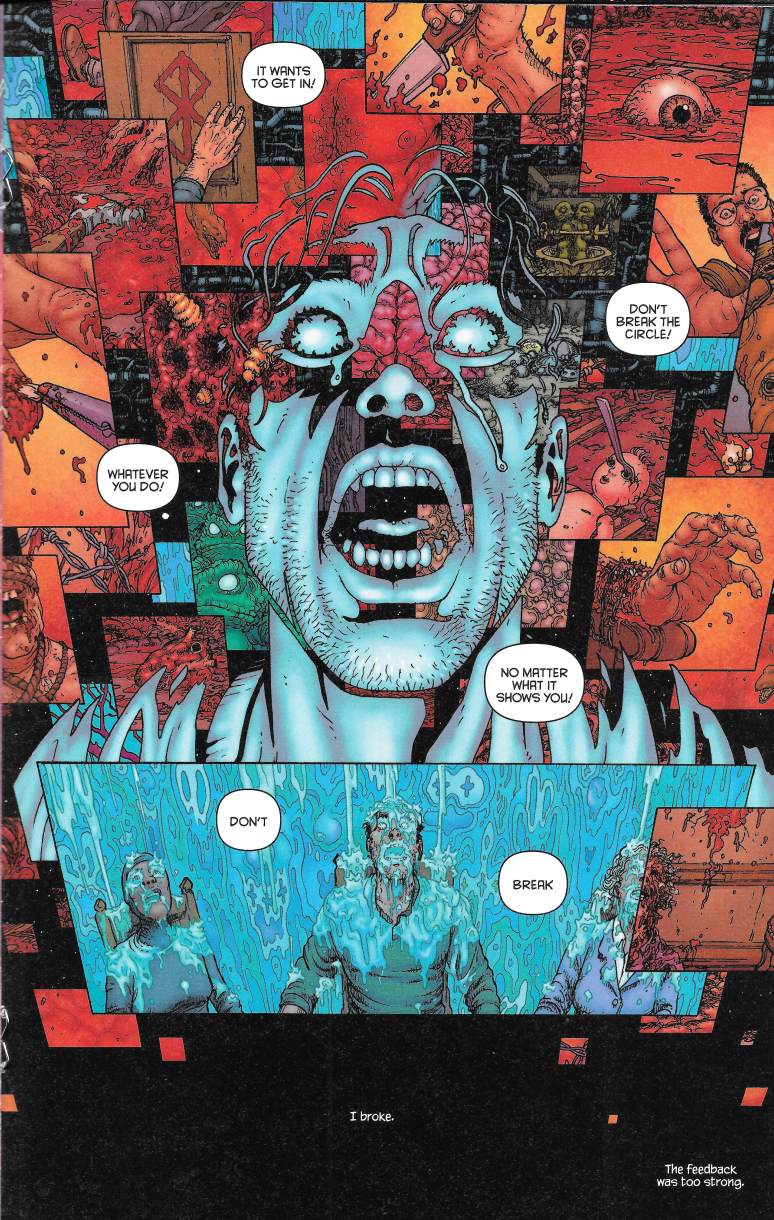 …but now we leave this for what I think might be the present and our nameless hero? Can we still call him that? falling into the maw of Xibalba with other astronauts, already converted by the presence, pursuing him. 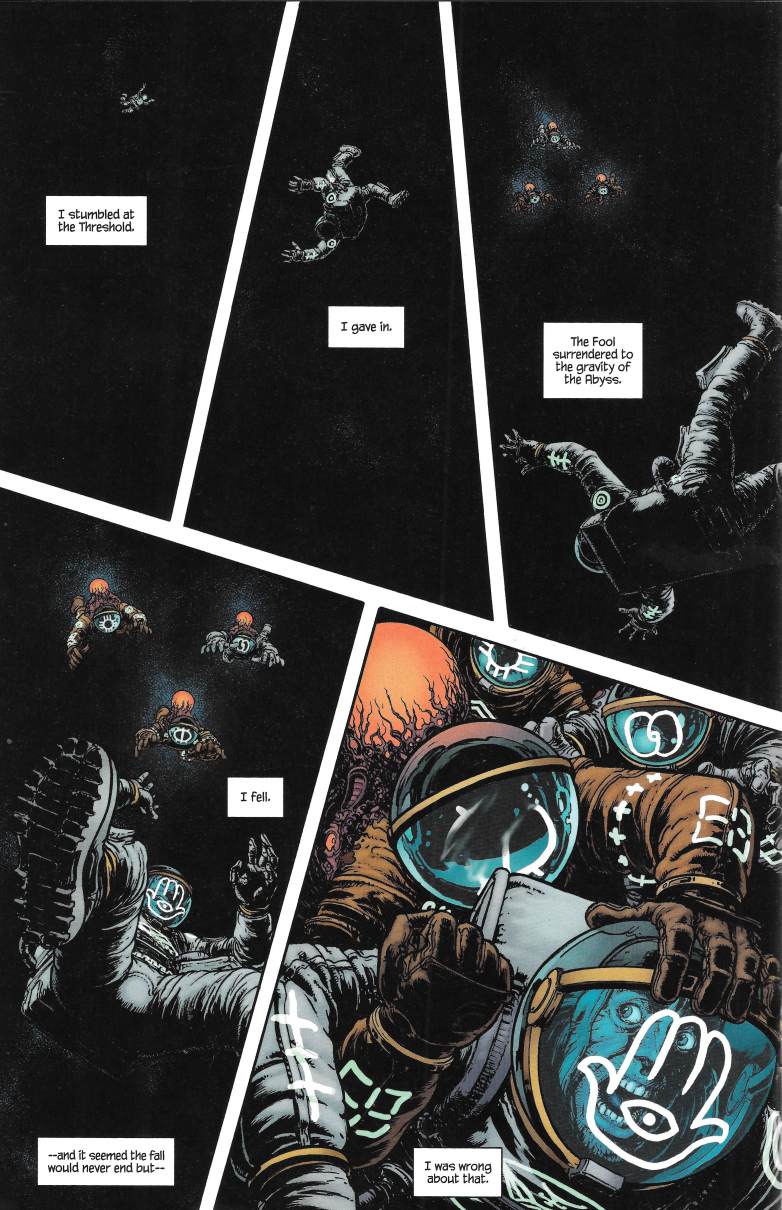 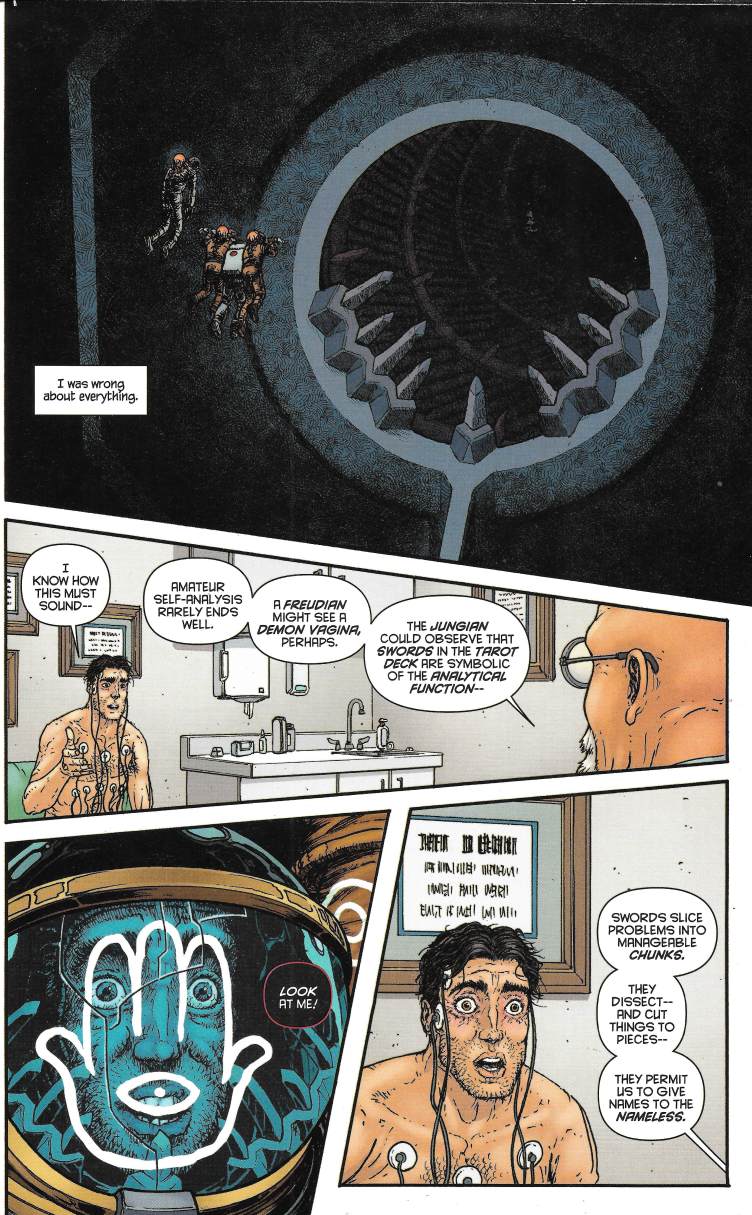 And therein lies one of the critical devices that Morrison uses that some might point to as a flaw: we have an unreliable narrator. Like in Kubric’s The Shining, we don’t know if what our central character sees is real or make-believe. And just like The Shining, that doesn’t take away from the terror we feel because the imagery and story are compelling. The artist and writer have wrapped us up in what’s going on in a realistic way and we’ve invested in the story. But just like that Escher drawing a few pages ago, our mind cannot twist these events into a sequence that makes logical sense.

Morrison and Burnham decide to double-down on that confusion by throwing out another horrific image, just because. 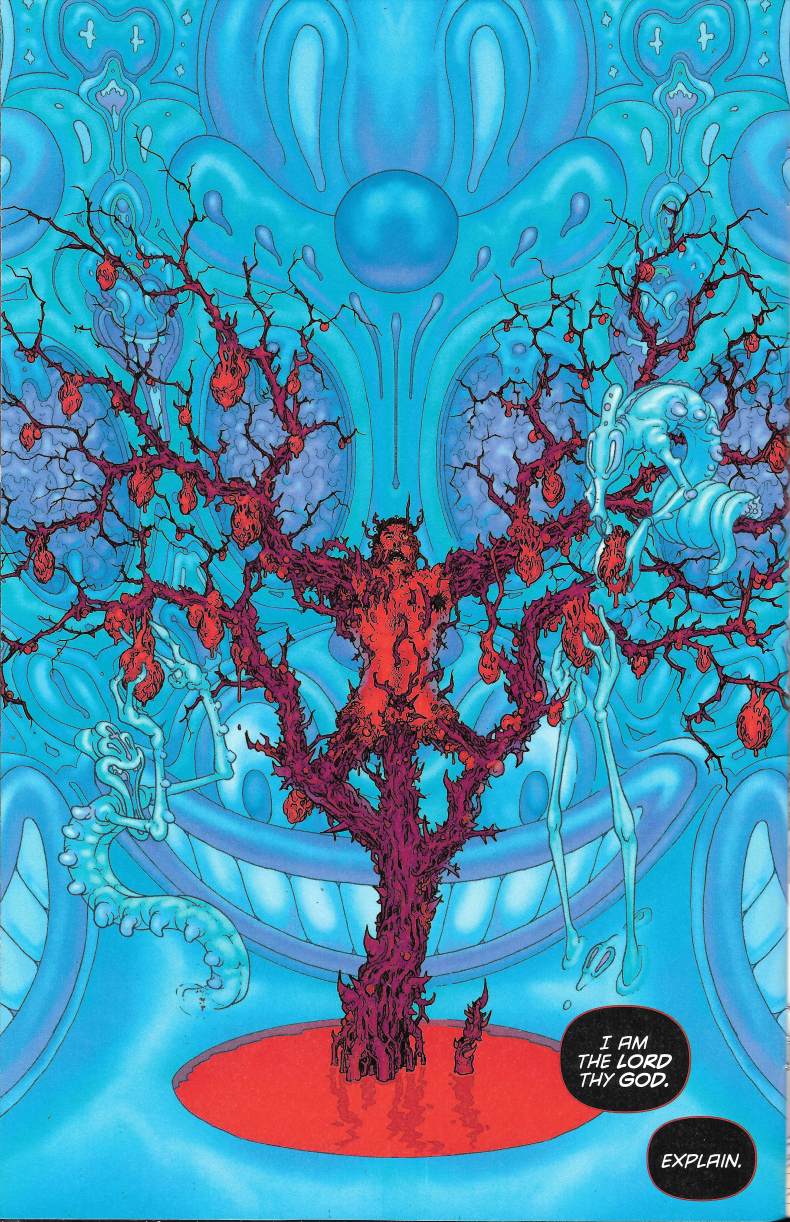 And then the give us what we have been waiting for: a bit of resolution. What happened in that room, firstly… 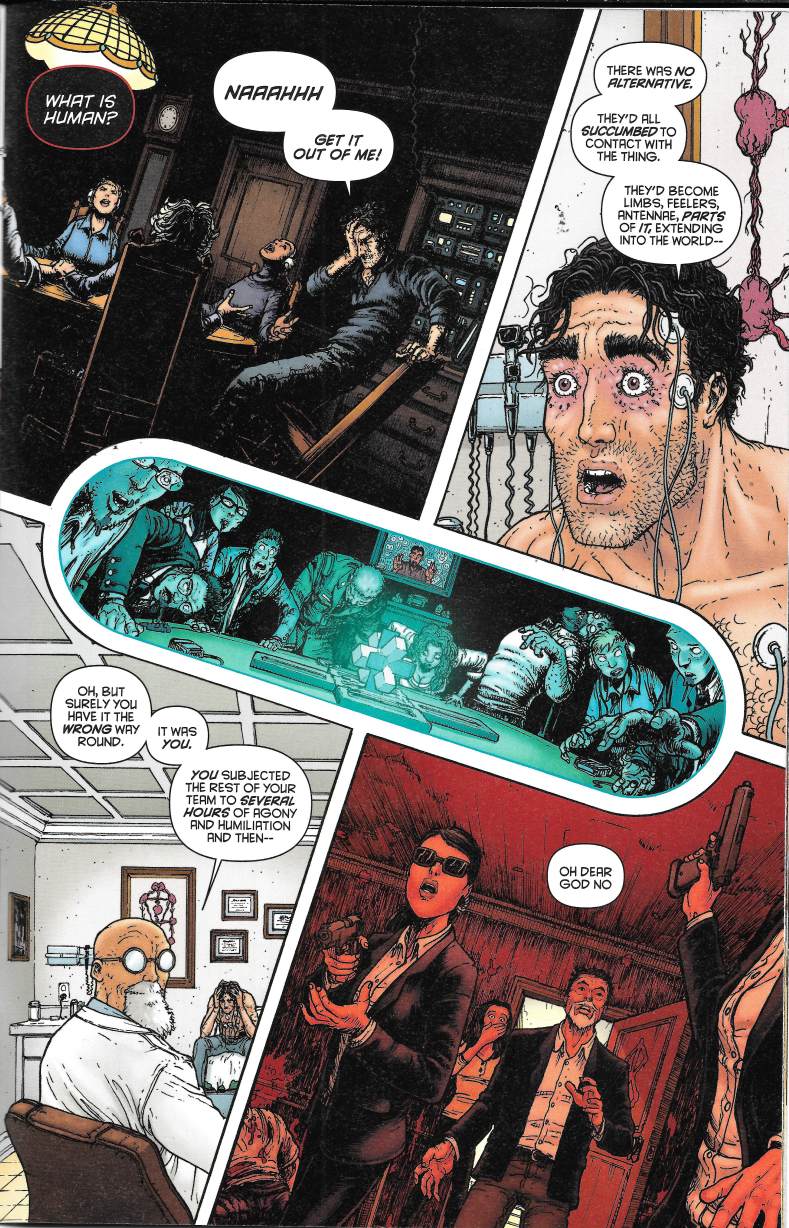 …which is: our protagonist murdered them all thinking they were infected by the presence when actually it was him… 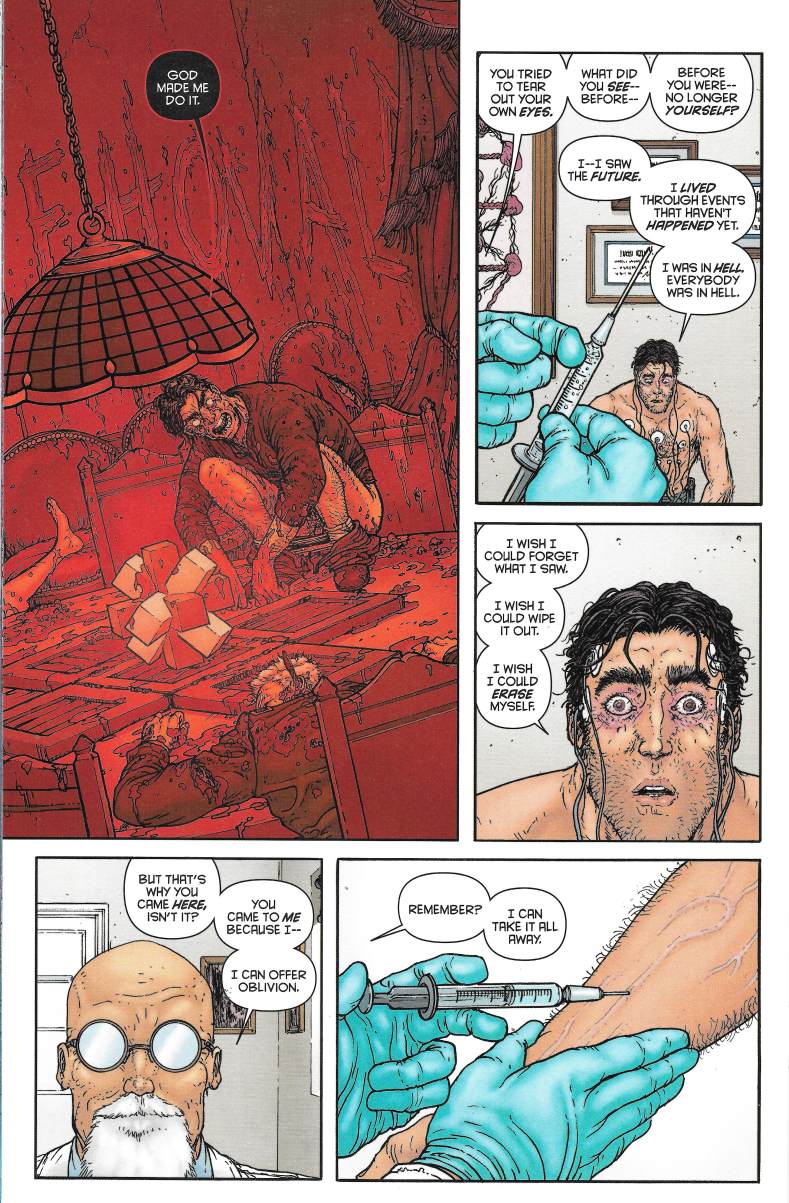 …and secondly, a bit about how he became nameless and why. 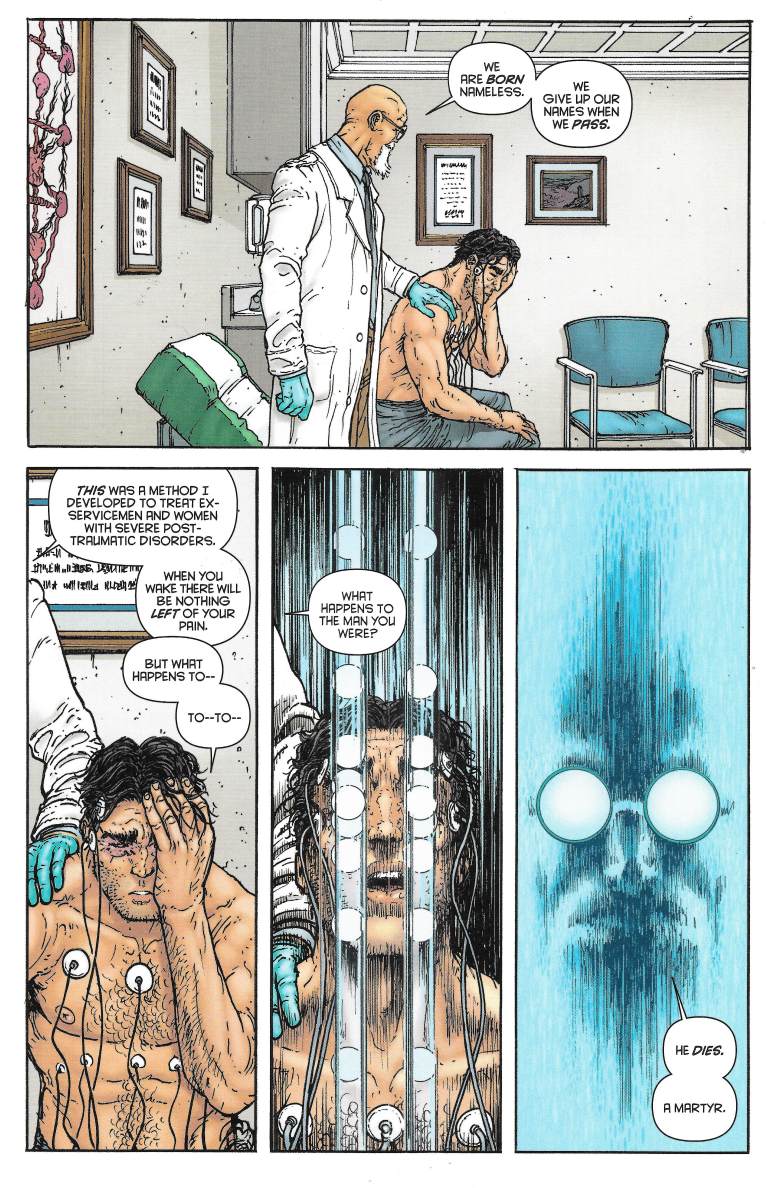 Along with the exquisite horror that what he is doing is akin to suicide, only his body will live on with some other personality inside it. A sort of rebirth, if you will.

But rebirths are not always without bloodshed… 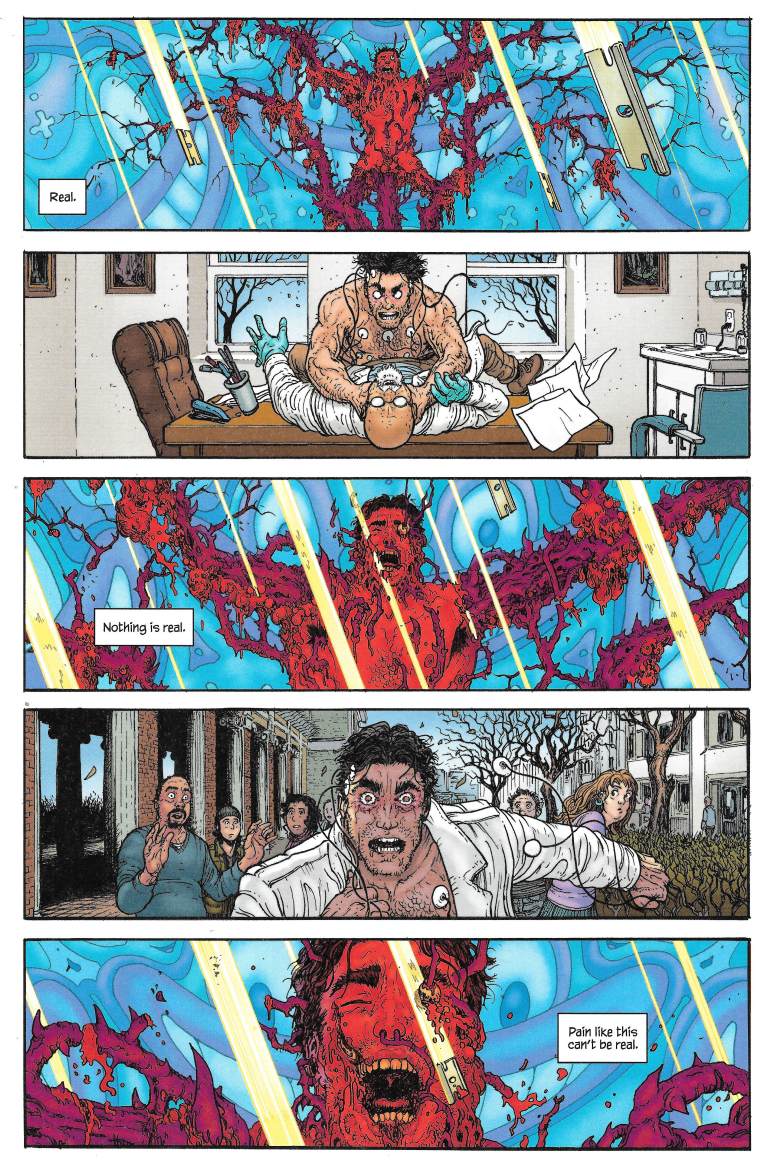 …and just because you can’t remember your past, it doesn’t mean you will change your future… 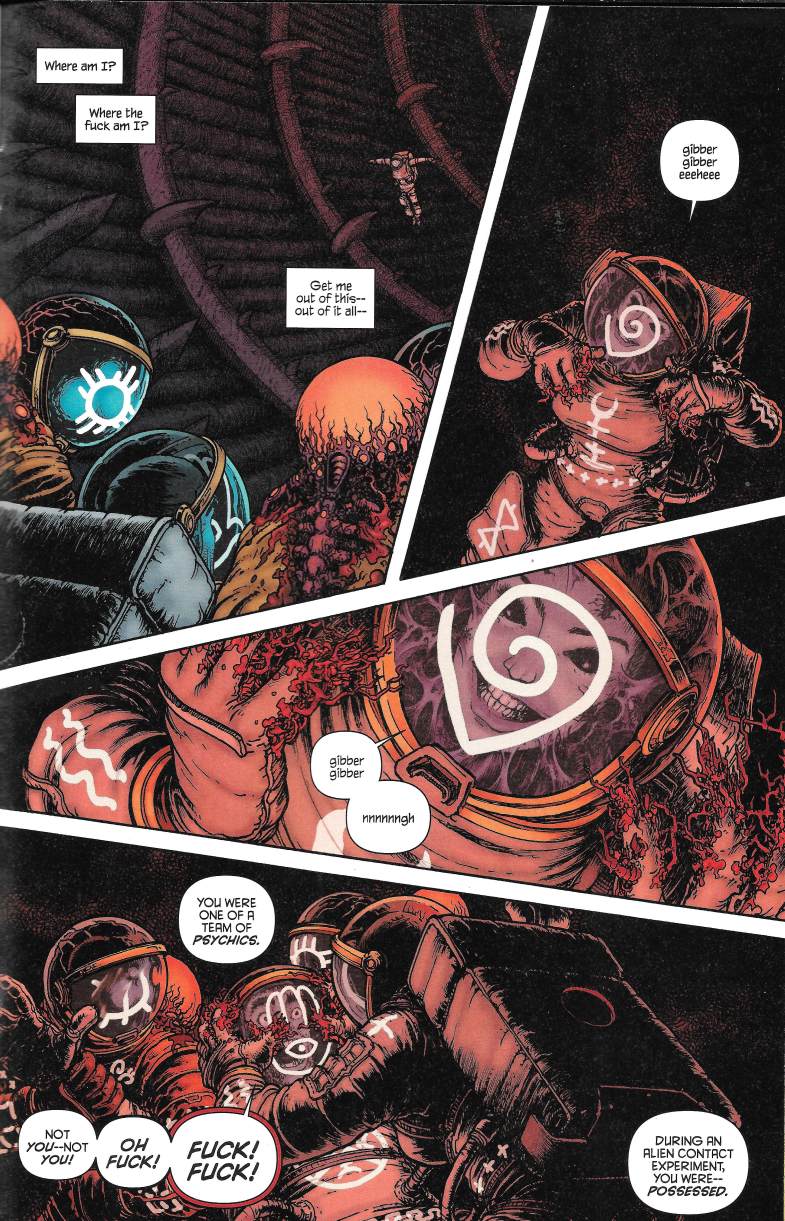 …and if you think you have a handle on any of that…then the last page will make you question everything you’ve seen so far. 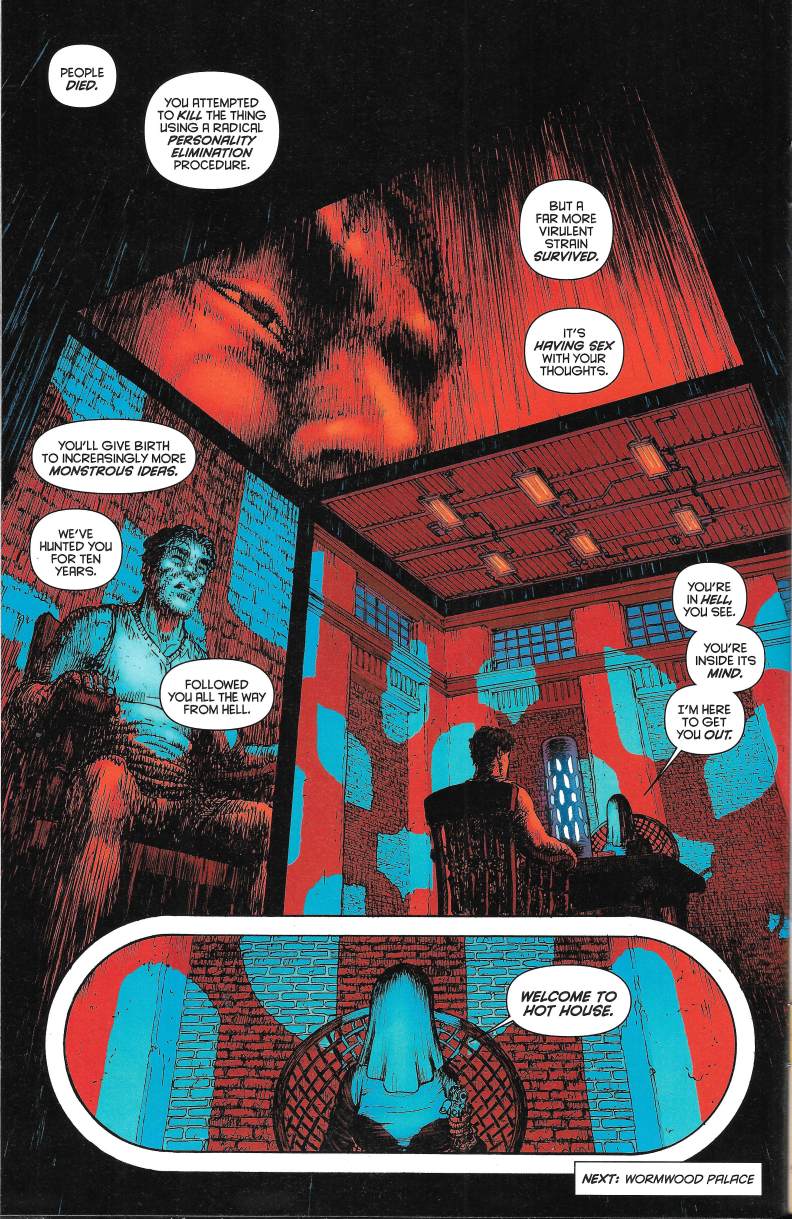 That’s how I leave this book. In a state complete and total shock. I don’t know how this begins or how it ends, I only know that it is effective. I need to find the trade.

But maybe when I’m better prepared for the emotional twisting the story will put me through.

Hats off to Morrison and Burnham. This is one monster that you can’t put back in the box. Like Neonomicon before it, they have created a modern Lovecraftian masterpiece.
Posted by SonOfCthulhu at 5:12 AM