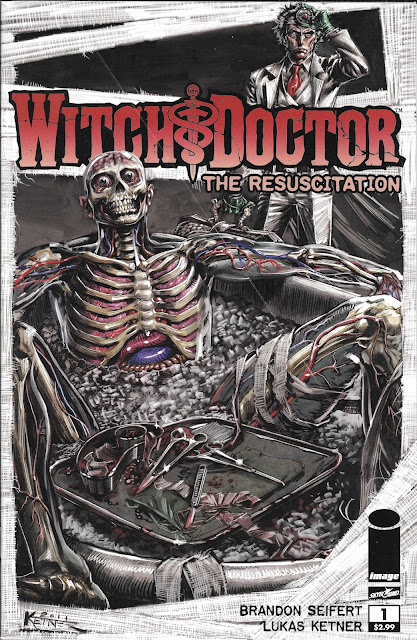 There are moments when the Crapbox truly delivers something. Maybe it is something deep and enriching. Or something with art so devastating that you marvel at its complexity and presence. Or sometimes it is a story that touches you and makes you feel an emotional resonance you didn’t even know you were capable of.

Witch Doctor: The Resuscitation is none of those, but it does fit into that surprise find category. Why, you may ask? Because it is a joy to read. From cover to cover, both times I’ve sat down with this book, I’ve come away with a smile on my face. The art is good-to-great, competently conveying the action of the piece. The plot is decent and has many great action moments. But the key component to this issue is the interplay of the characters and the interesting mix of personalities. It’s like watching an Ocean’s Eleven movie where the heist is neat, but it is the actors working with each other that you really came to see.

Let me start you off with the first page of the book and we’ll go from there. We begin Dr. Vincent Morrow, unknown to us unless we read his prior Witch Doctor four issue mini-series or the subsequent-to-this-issue six issue follow up limited series. He is off camera using x-rays like some kind of odd Tarot card reading. He is explaining his interpretation to an associate, who we will meet shortly, and by virtue of that explanation to the audience as well. 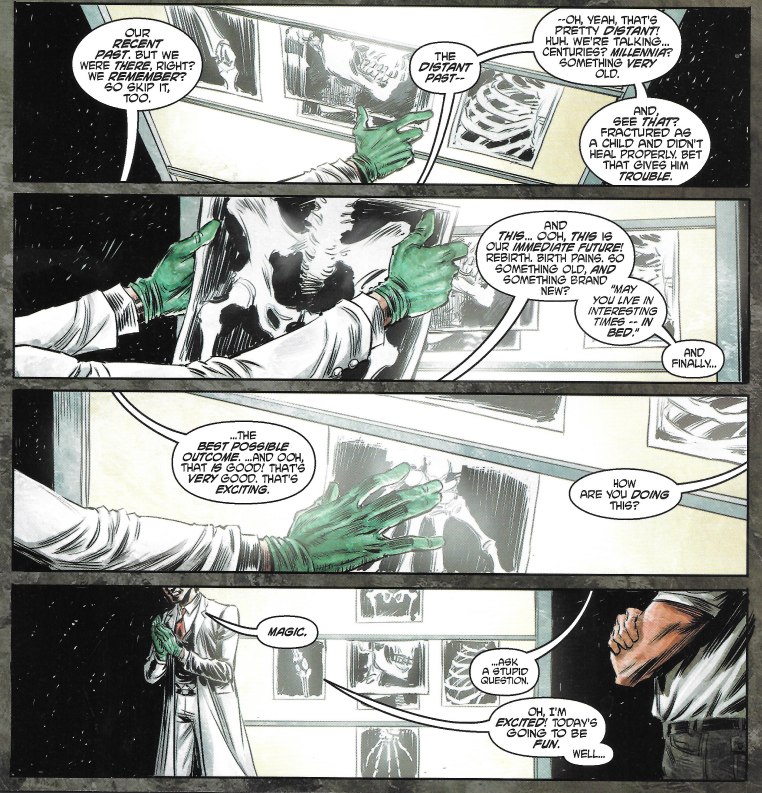 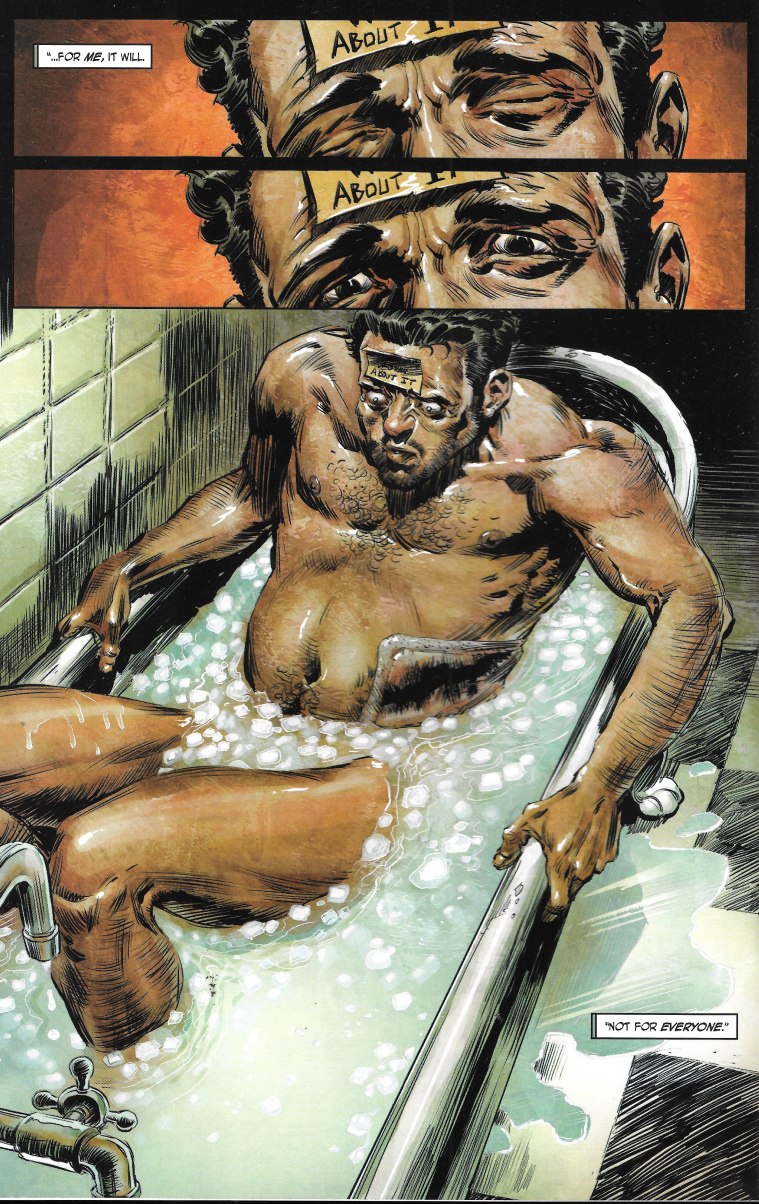 It’s not exactly what you think. Or what he thinks for that matter. The post-it note on his head says… 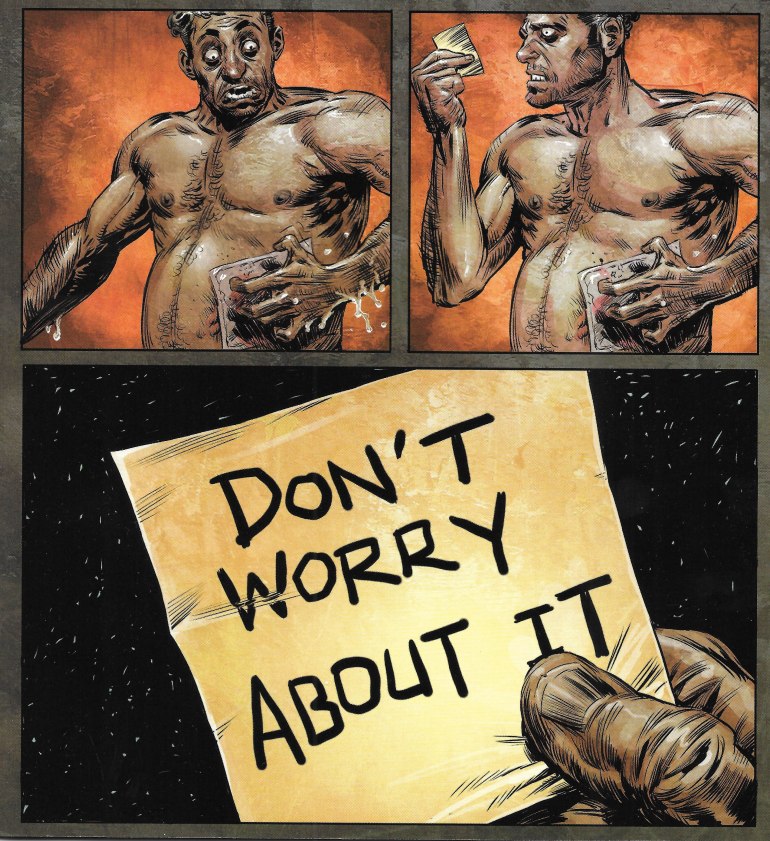 …and with that, he is off to the hospital as quick as he can go. Because no one likes having their kidney stolen. Although in this person’s case, stolen isn’t the right word. 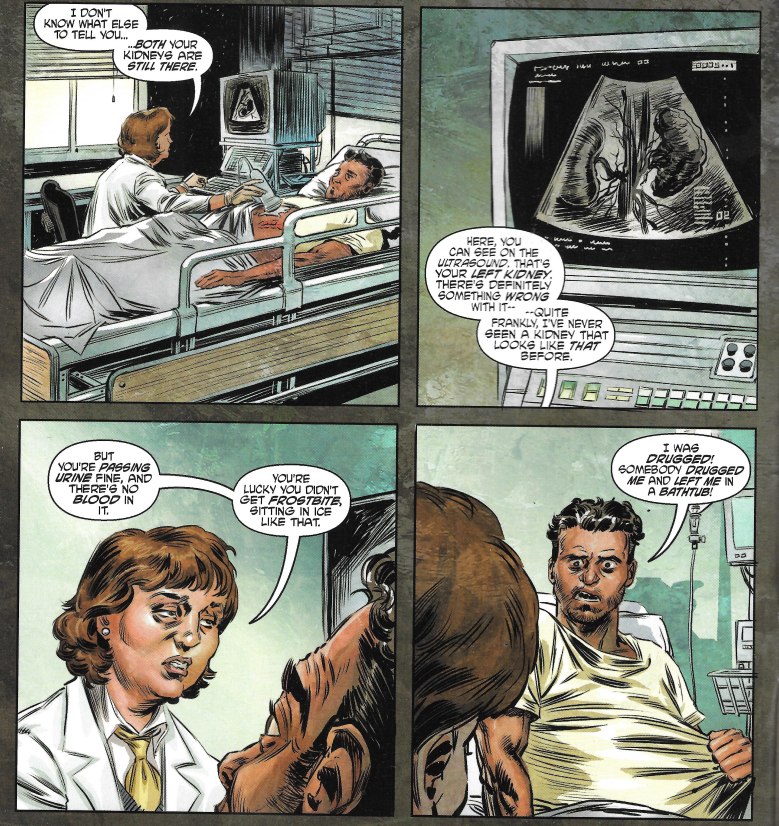 Replaced is the correct term. Someone replaced his kidney with one that is definitely NOT a normal human kidney. However, his health doesn’t seem to be impacted and he’s not rejecting the new tissue…so is he okay? Time will tell. 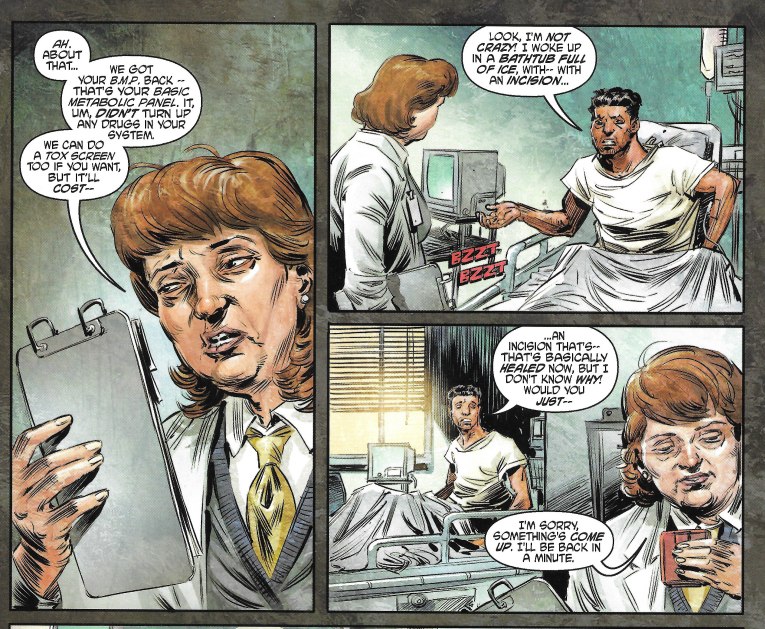 To make matters stranger, the fellow doesn’t appear to have been drugged. Someone could do this while he was sleeping without the benefit of any anesthetic. Odder and odder. 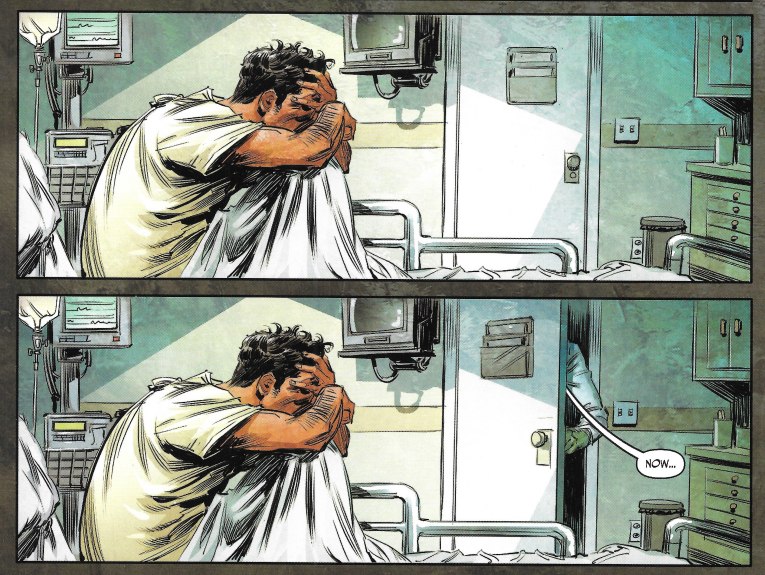 And the incision appears to be healing itself at an accelerated pace. And if you thought the number of odd things that walked into this poor man’s life amounted to more than enough…well, we’ve only just started. Introducing his one chance to survive this… 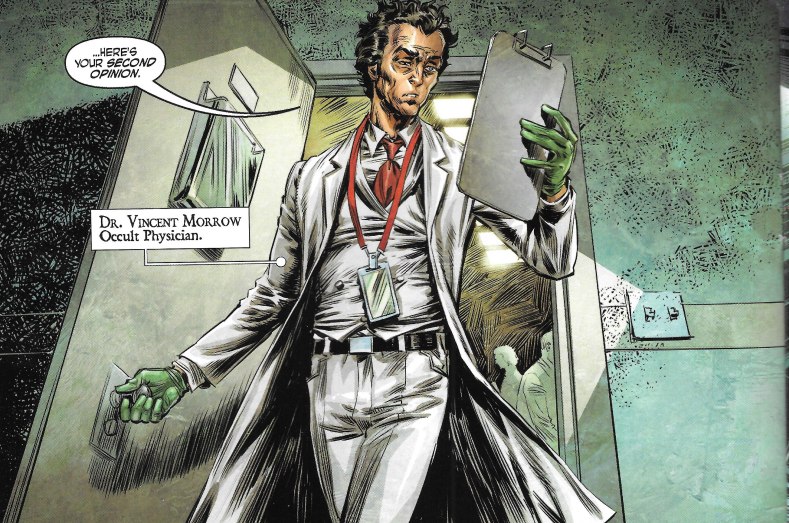 The patient is quickly transferred to Morrow’s clinic for further tests. Weird, odd and strange tests. 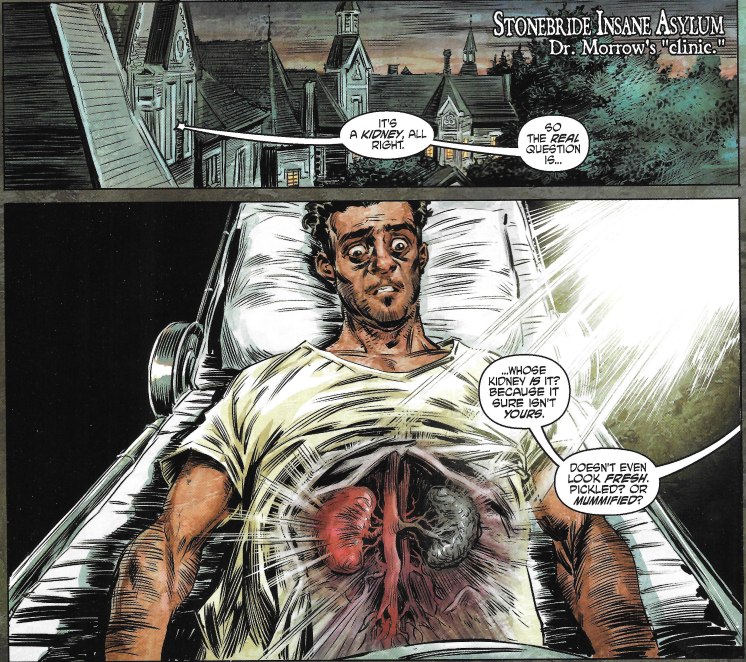 But effective, as we can now clearly see what the issue is. He’s got an ancient, shriveled kidney in place of one of his own.

Before going any farther, I have to state my love for this opening. It fills all my checkboxes for starting a mystery going that I really want to see solved. We get an empathic character and the introduction of a wacky, eccentric genius that appears to be the only one who can help him. I’m digging the setup. Let’s see if they keep it going. 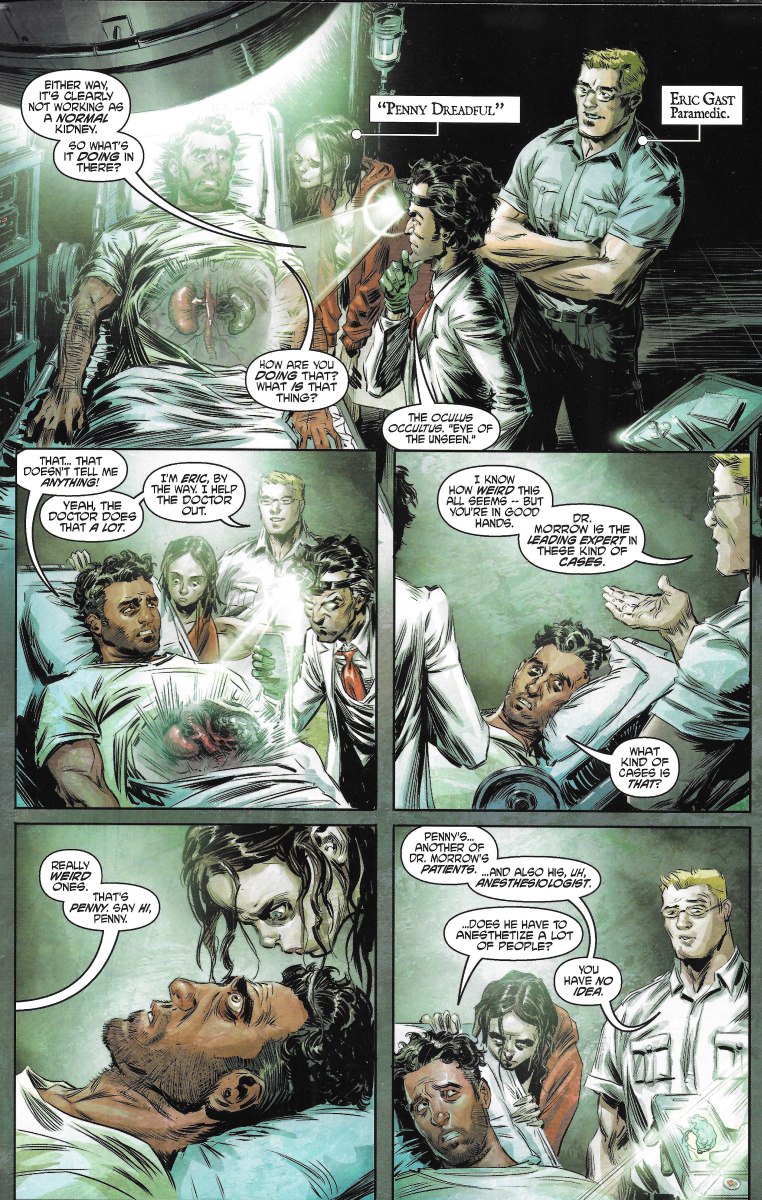 Next up we meet the doctor’s strange assistants: Eric Gast, a typical paramedic and “Penny Dreadful,” Dr. Morrow’s muscle and anesthesiologist. Oh, things cook up so well in this book. Loving these cast introductions. 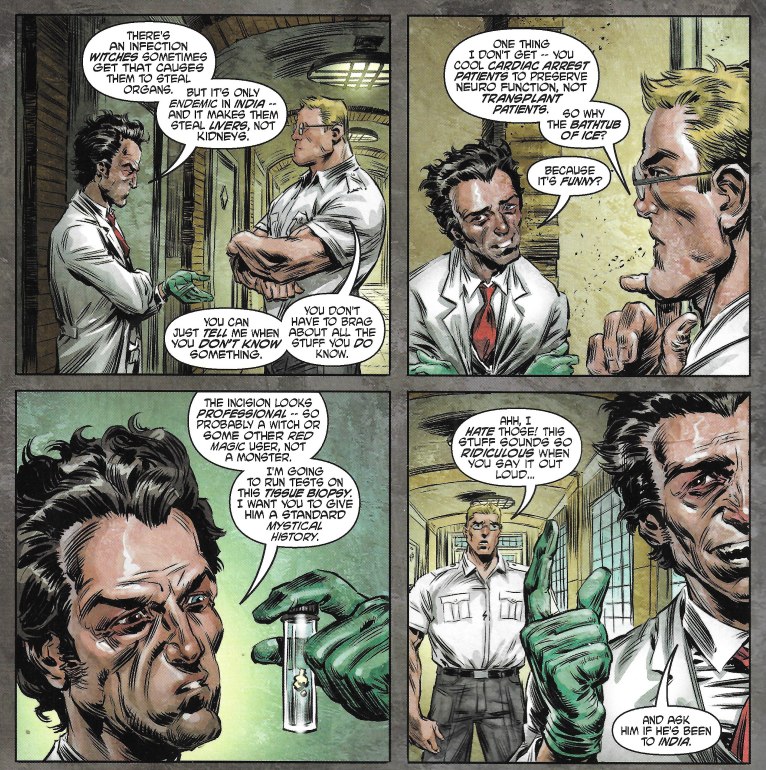 The good Doctor and Eric step out into the hallway to confer, and we get a bit of their dynamic. Eric is straightlaced, and while he respects the doctor’s skills there also appears to be the undercurrent that he is keeping Morrow's ego a bit in check. Meanwhile the doctor appears focused and a bit nutty…almost exactly like that “other” Doctor. The British one who rides around in a blue box shaped spaceship.

In fact the more I think of this book, the more it seems to riff off of a Doctor Who show. And I don’t mean that in a bad way. There is nothing wrong with taking a decent premise and perverting it or subverting it in new and interesting ways. And Doctor Who as an occult physician with a normal companion mixing with his crazy adventures sounds like (and IS) a heck of a great idea.

What I love most about this book is that it successfully weaves a compelling dramatic story with bits of humor. Such as here: 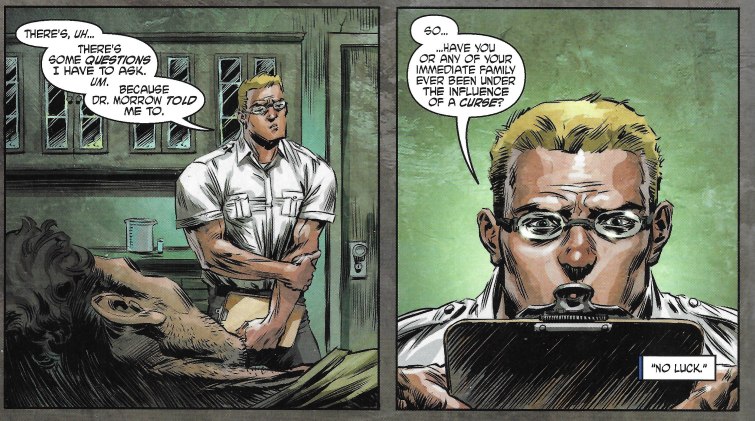 When these questions don’t lead to a ready conclusion, the Doctor takes a more drastic course of action… 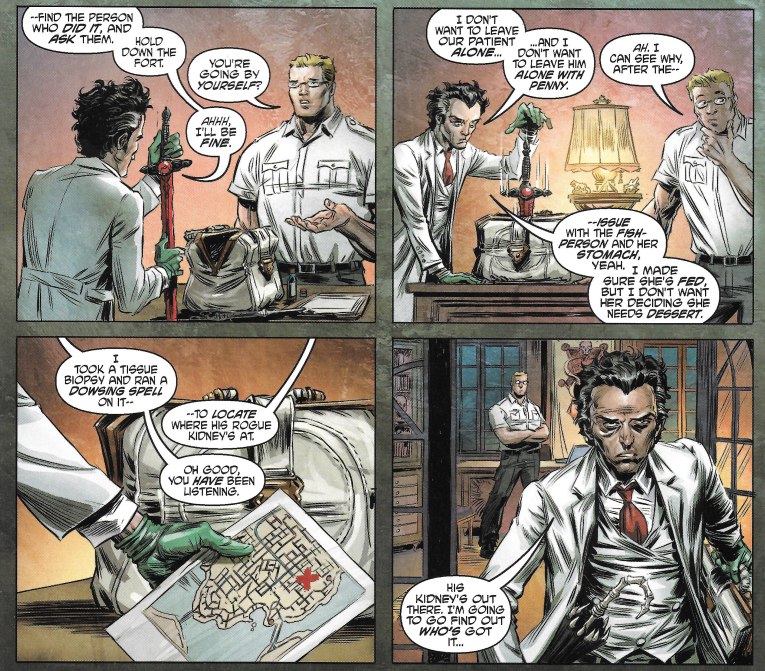 And where that dowsing leads Dr. Morrow is into the lair of another occult physician, who at the moment appears to be consulting a corpse’s gibblely bits as a source of premonition. 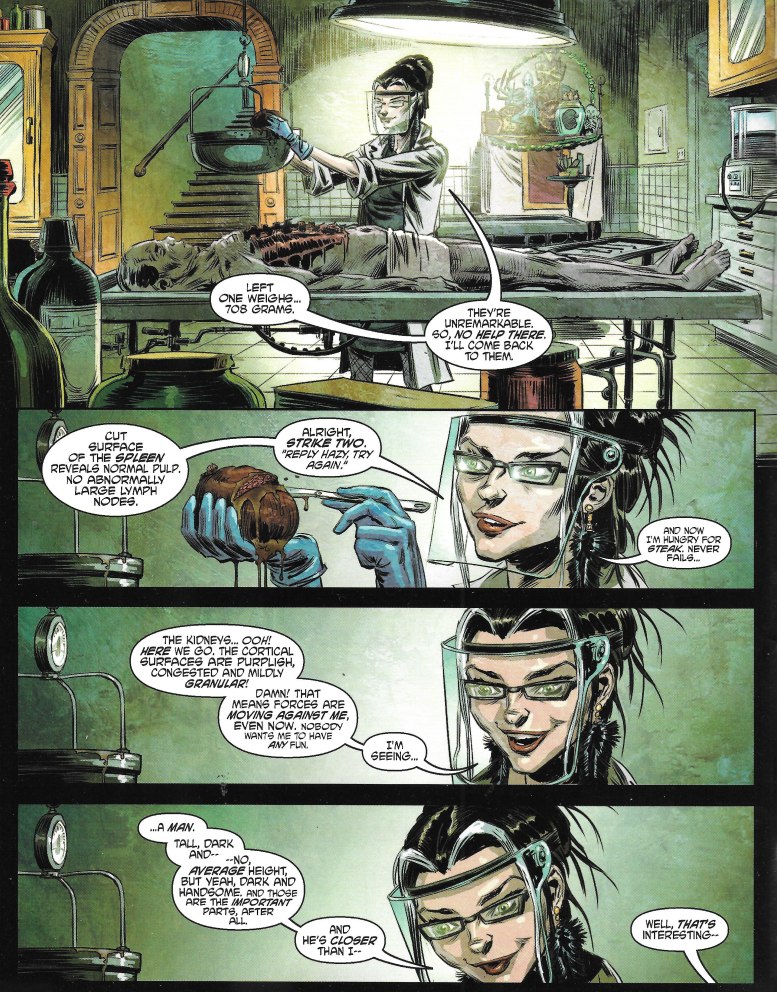 A premonition that precedes the doctor’s entrance by but a moment. He remarks that she appears to not have any guards. In that conclusion, he’s wrong. 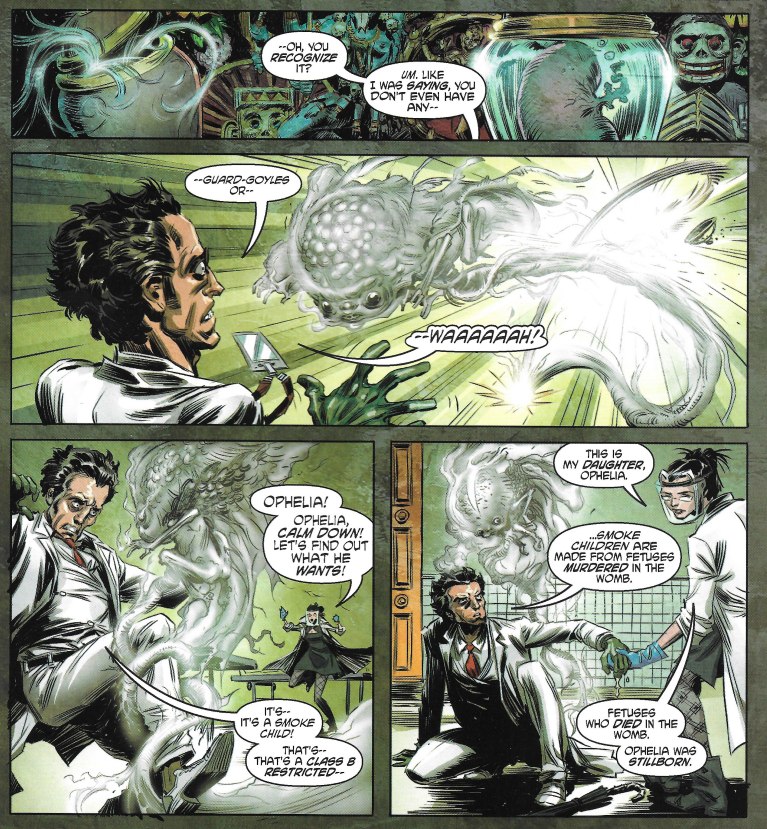 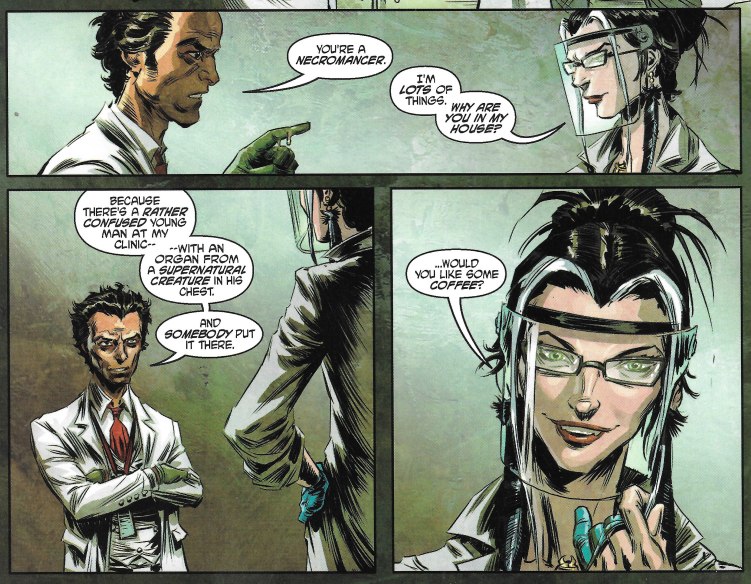 This ought to be interesting. Catrina is our prime suspect, and before long, the good doctor has her spilling the beans. Seems it is as easy as asking her about her altar. 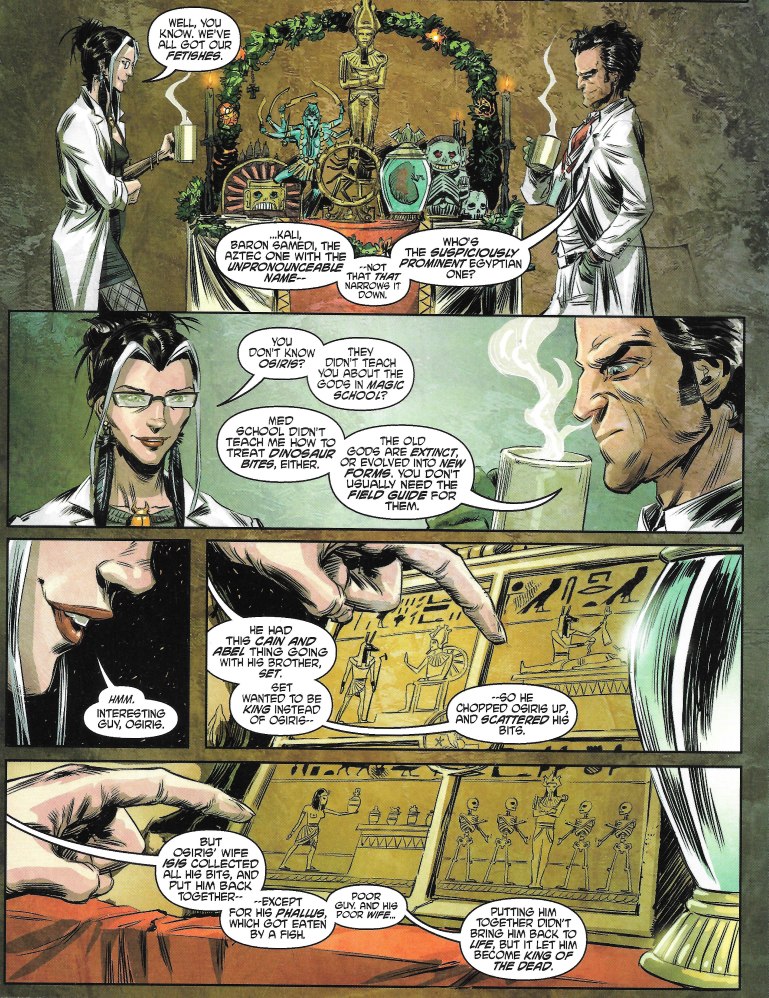 In her next statements she all but admits to waiting for the resuscitation of Osiris in our patient’s body. And as Dr. Morrow puts the last pieces in place he realizes… 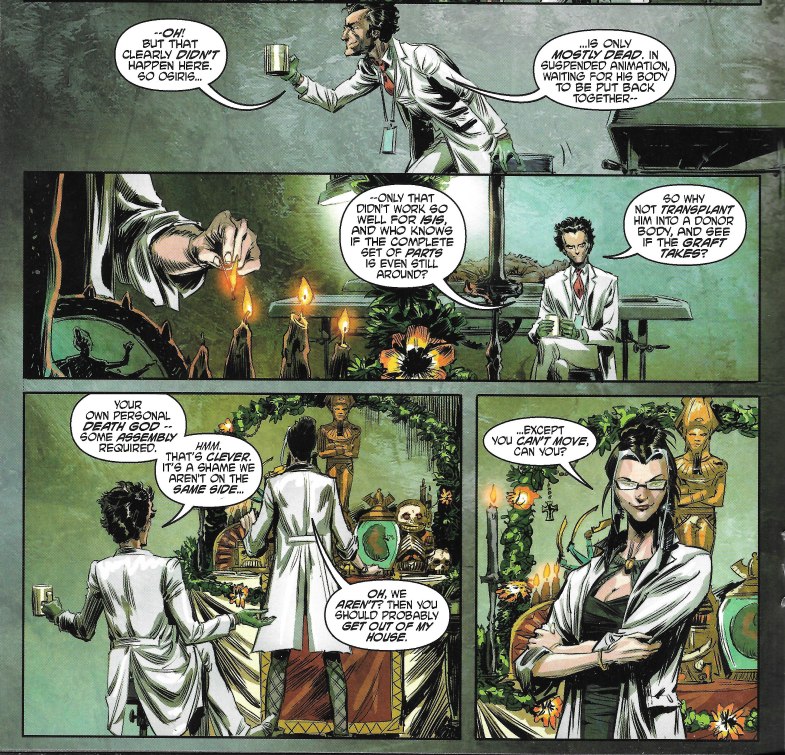 …Yup, all that candle lighting wasn’t just for fun. So what was it, exactly? 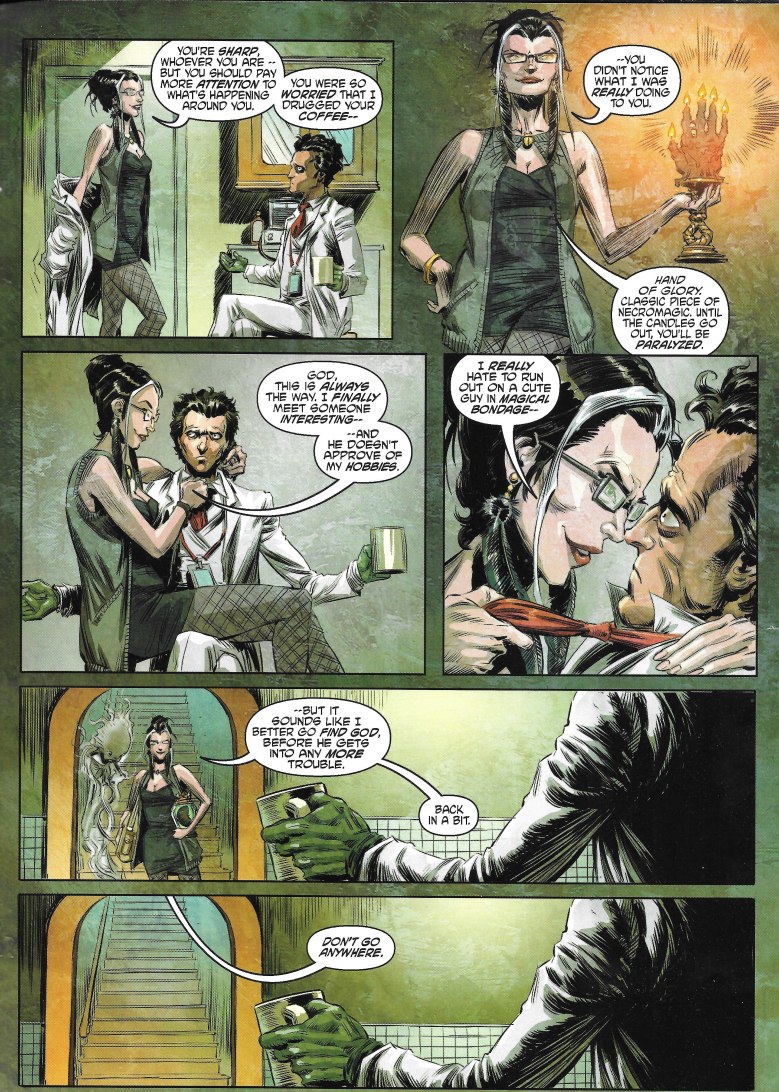 Looks like the Doc is in something of a pickle, right? Or is he?

No, he most certainly is. And he would remain stuck if not for Eric and Penny showing up unexpectedly dragging the body of our Egyptian-God kidney transplantee. Appears he’s taken a bit of shine to wrapping himself in gauze too. 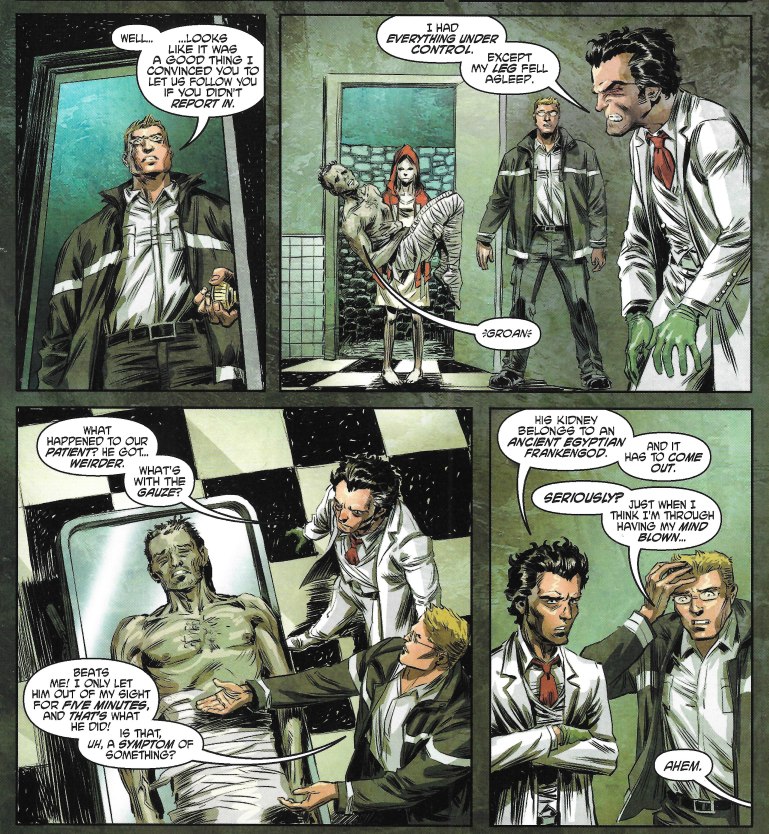 Just then Catrina drops in which gives us a chance for some GREAT repartee. 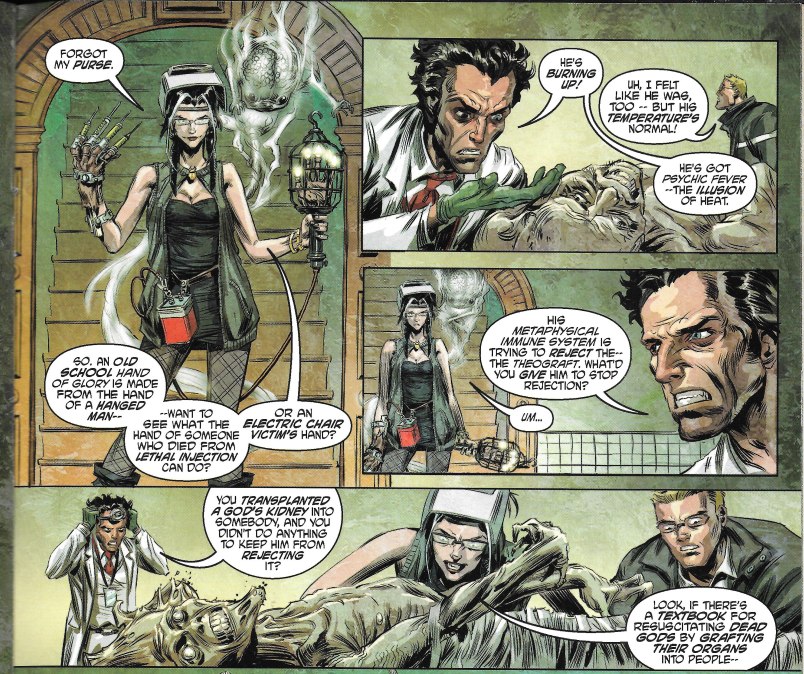 And it appears that her plans for the patient aren’t going so smashingly. He becomes airborne and makes like he’s going to do the young necromancer in. 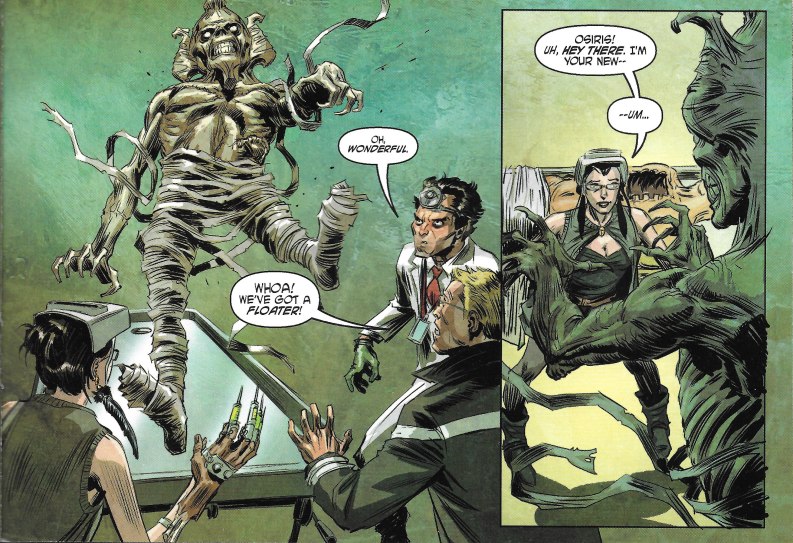 A truce is quickly struck as Dr. Morrow explains just how much trouble Catrina has gotten herself in. 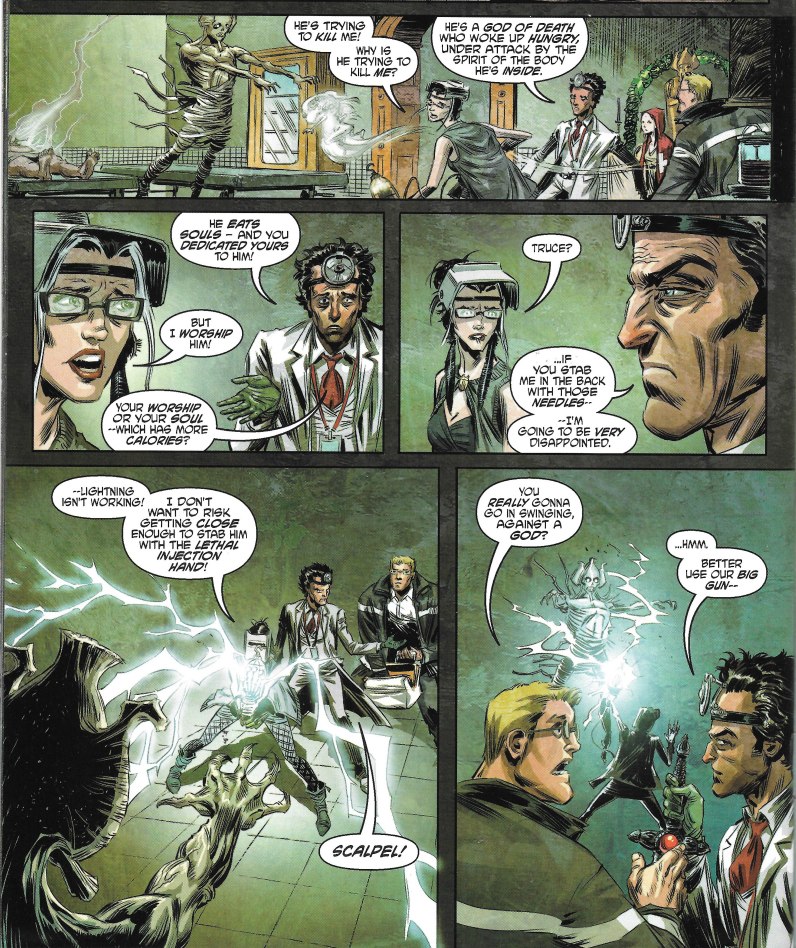 As they send Penny in, there is a brief discussion of the care and feeding of Gods told in the most uproarious manner and I’m just in love with this book at the moment. Great stuff here. 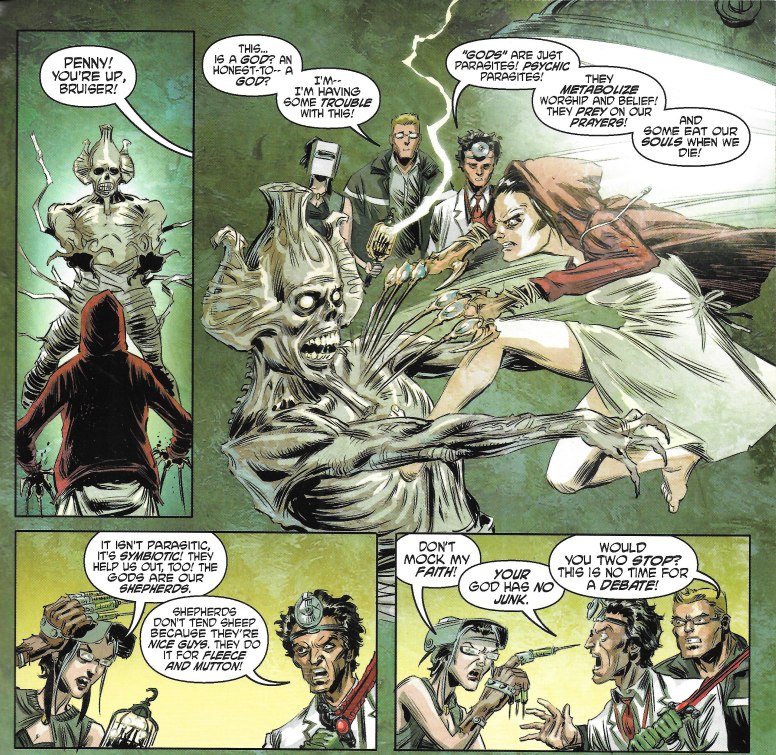 At that, Eric reminds the doc of something and he uses his magical head mirror (I looked it up, that’s what it’s called) to show Penny exactly where to grab to get the mummified kidney out of our floating God-being and the patient crumples to the floor. 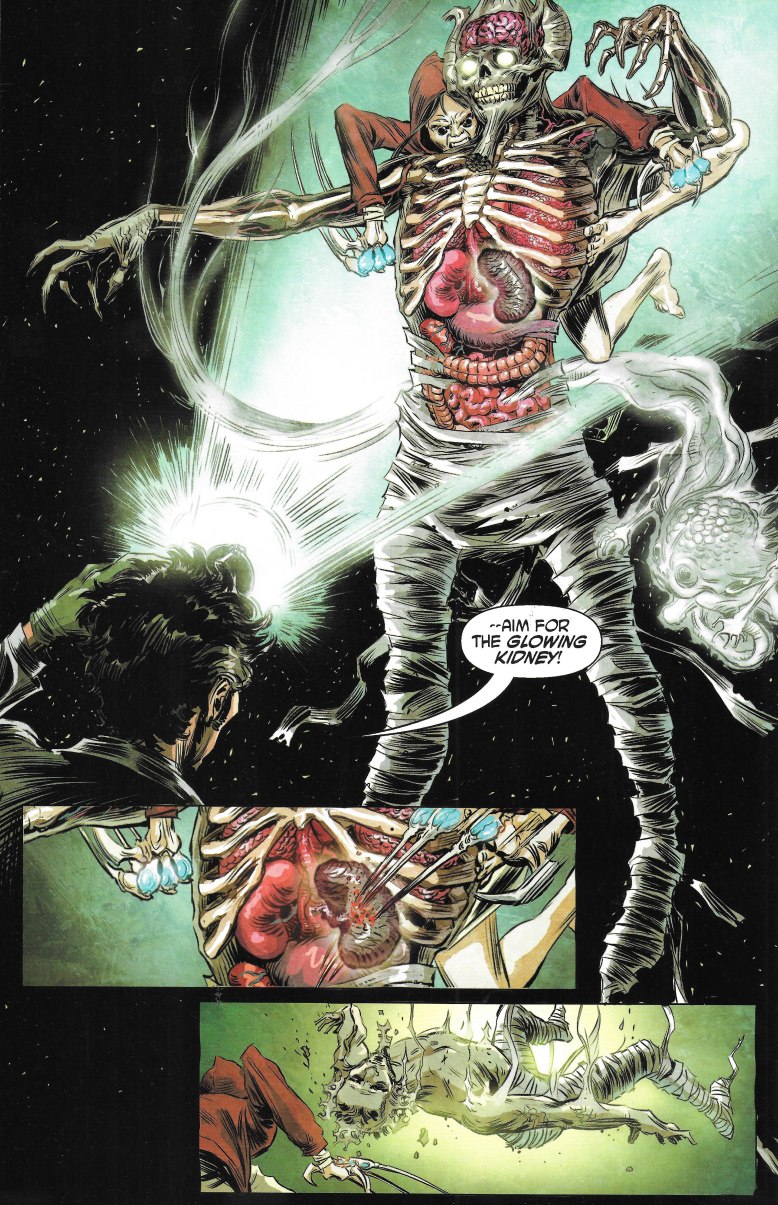 With that, the patient is rushed to the hospital. He is saved, but he is down to one and only one working kidney. The Doctor makes a play for Catrina and is only mildly rebuffed. 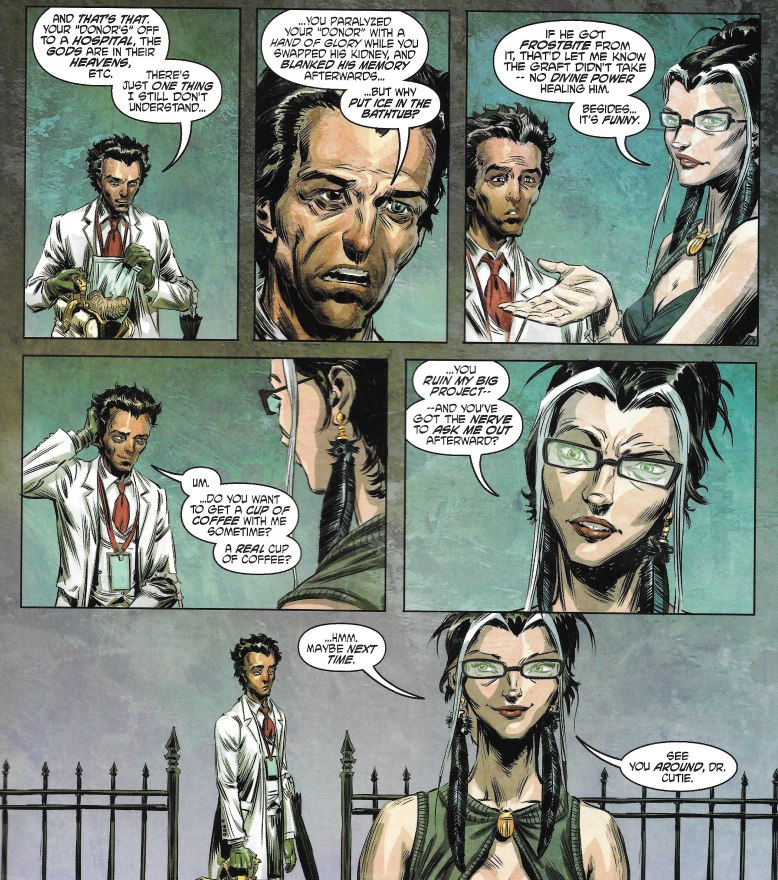 …and while Eric makes light of Dr. Morrow’s evident infatuation, we end with a bit of mystery as some figure is watching them through the waters of a still bath while stirring it ever so gently with a metal spatula. 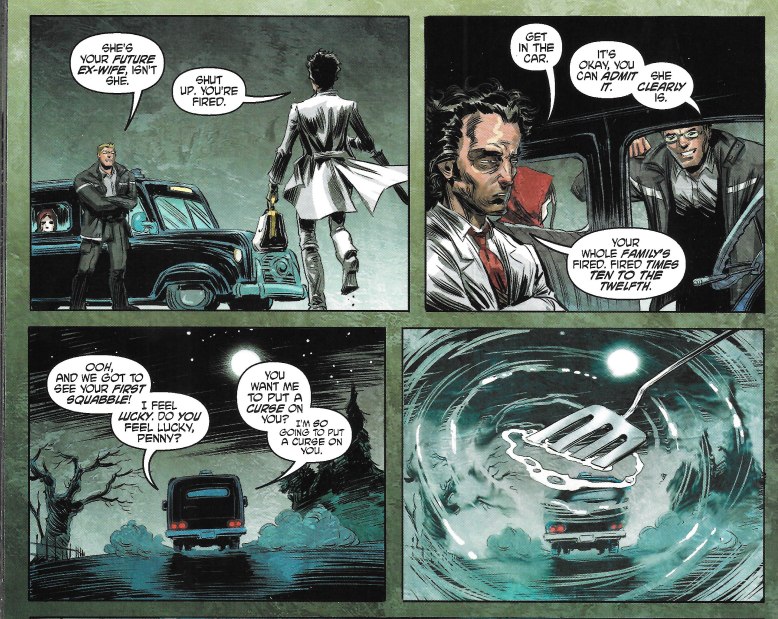 Maybe this wasn’t horror. Maybe it doesn’t count. But damn if it wasn’t GOOD. I’m a convert to Witch Doctor for life. I’ve even informed my insurance carrier to switch my primary care physician to him. I feel my life…and death…would be in good hands.
Posted by SonOfCthulhu at 2:24 AM