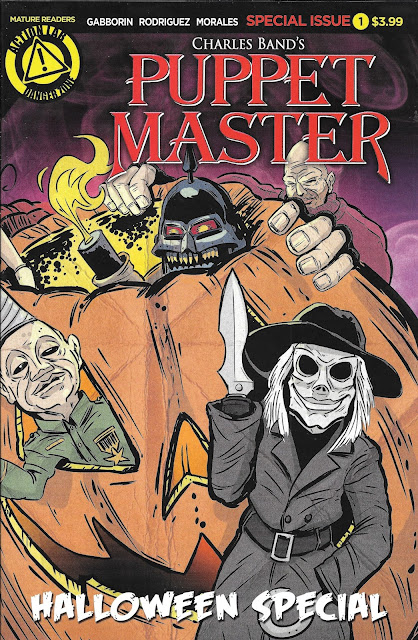 A puppet show that is definitely not for kids

I believe the plots are all...evil sorcerer wants to live forever, guy makes living puppets out of people’s trapped souls, sorcerer kills puppet guy and perverts his puppets to murderous superpowered puppets…something, something…hey, this one has Nazis…more something, something…puppets kill people.

It’s that very last bit that appears to be the appeal of the series. We tune in not for deep plots or moral conflicts, but to see how puppets with superpowers would kill people.

And yes, that’s pretty mindless entertainment on most levels. Honestly though, where else are you going to see freakshow entertainment like Leech Woman or Drill Head doing their bit to make the world less one living human body?

They are a perverse sideshow, but have attracted a huge cult following and racked up an astonishing twelve!! flims (with a thirteenth currently in production.)

I clearly underestimate the appeal of a good puppets-murdering-people movie.

This book series doesn’t, however.

This is the third Puppet Master book series, the first two being limited series of four and two issues respectively. This one however has put out a whopping 23 issues currently and two Halloween specials. Our issue in my hot little hands occurred after issue 7 of this ongoing.

It begins in a sorority house where the sisters are all getting ready for the obligatory Fraternity Halloween party. So we get a page of women drawn prancing around in sexy, revealing Halloween costumes while primping. 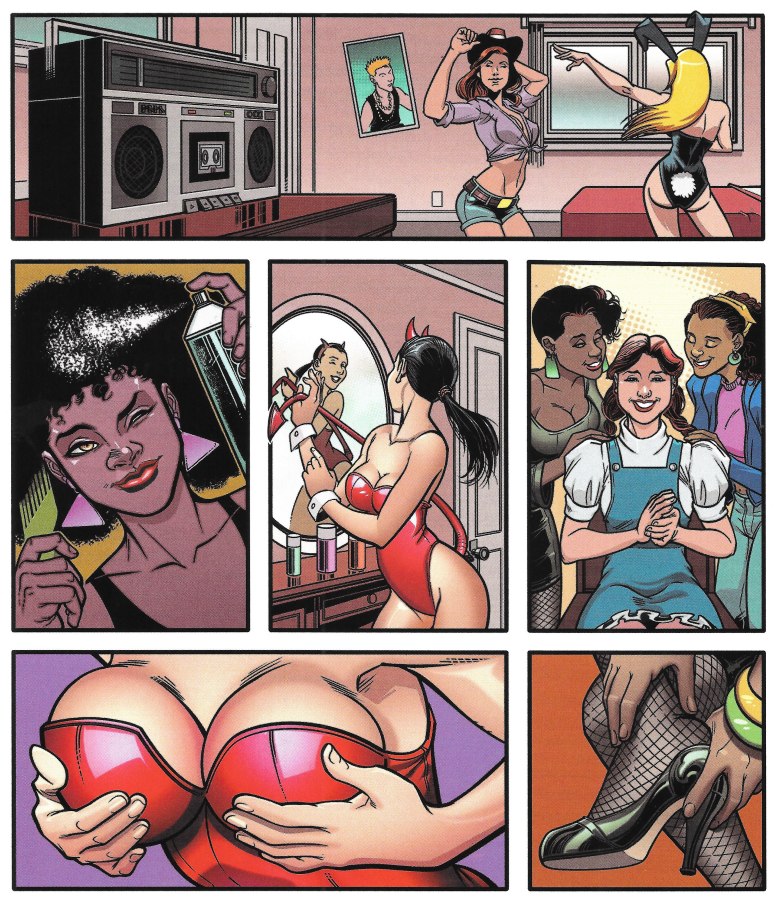 Outside we have a lone child trick-or-treating while passing the lucky girls who are leaving early for the party. 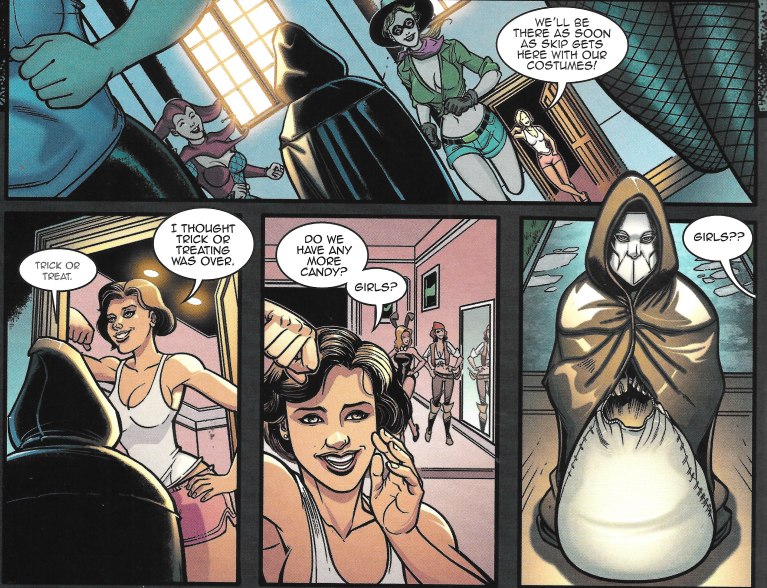 Since there isn’t any more candy, the girl decides to flash her breasts at the kid as a way of apology. I might be able to get behind this type of trick-or-treating. Then she closes the door on his face. 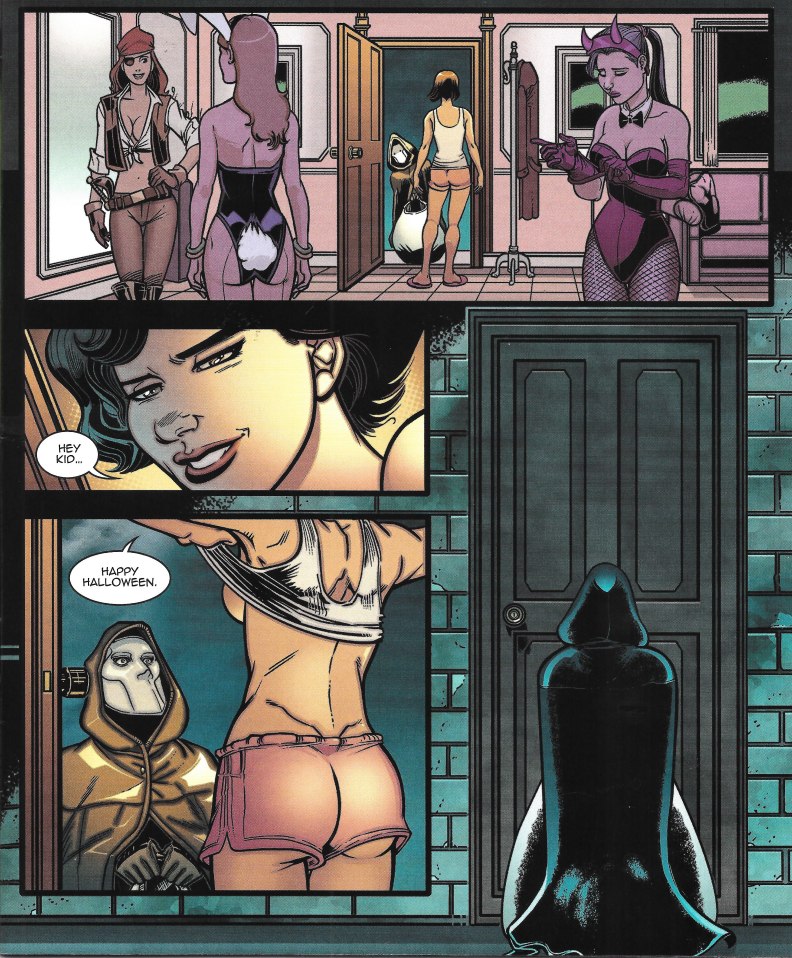 In response, the evil warlock-magician Neil Gallagher throws off his disguise as a child in Halloween costume and starts talking to his bag of killer puppets. 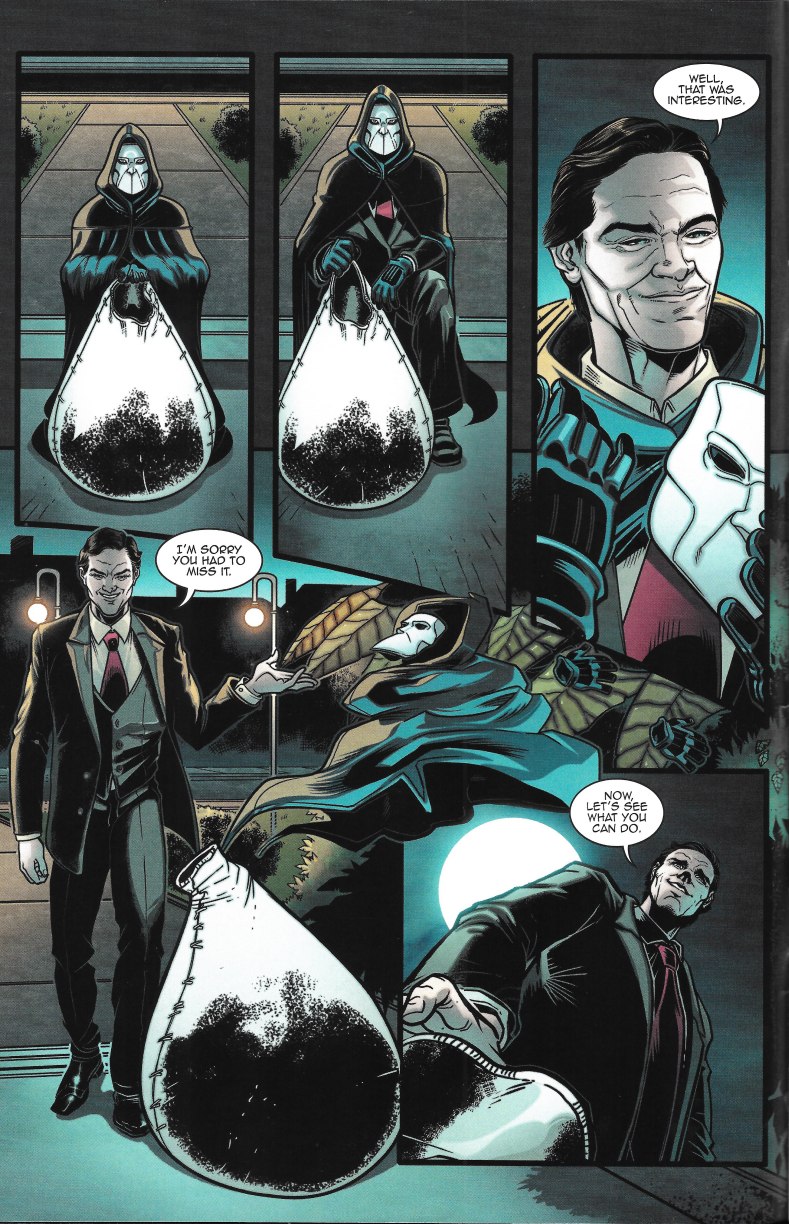 While inside, the girls are doing normal girl things like arguing over boys. The one who flashed the kid claims she “jumpstarted his puberty” as she brags about it to two other sisters. The only issue I have with it, is that at first I can’t tell any of these girls apart really. Then I realize that asking for deep characterizations and motivations is kind of a lot from a book based off a direct-to-video movie series. This thing is all about puppets killing people, so when do we get to that? 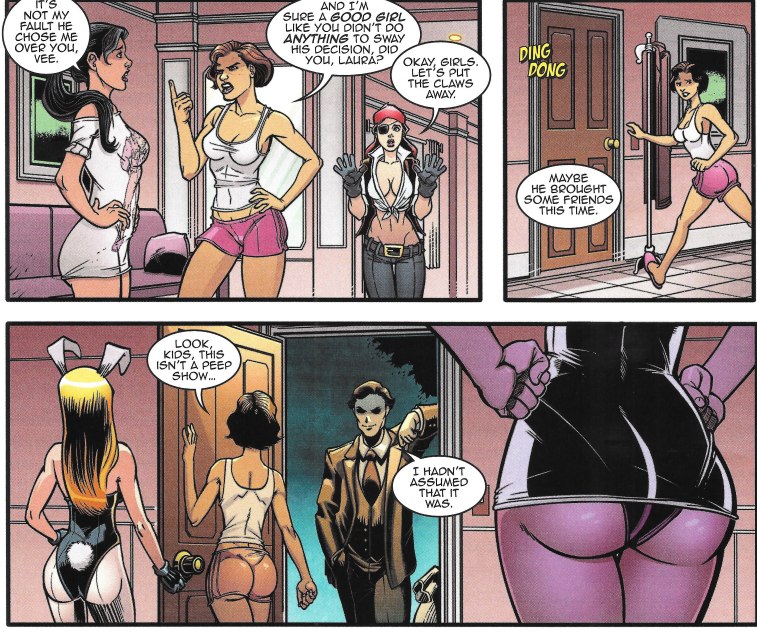 Looks like it will be soon, as Gallagher macks his way into the Sorority house under the guise of needing to use their phone. The pirate babe is going to regret ushering him in. How soon? 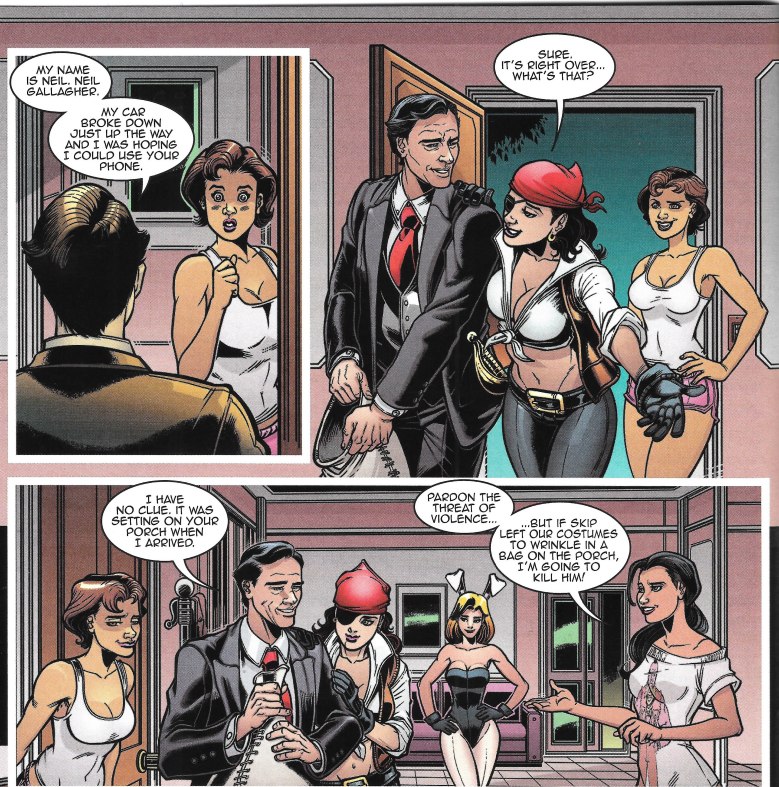 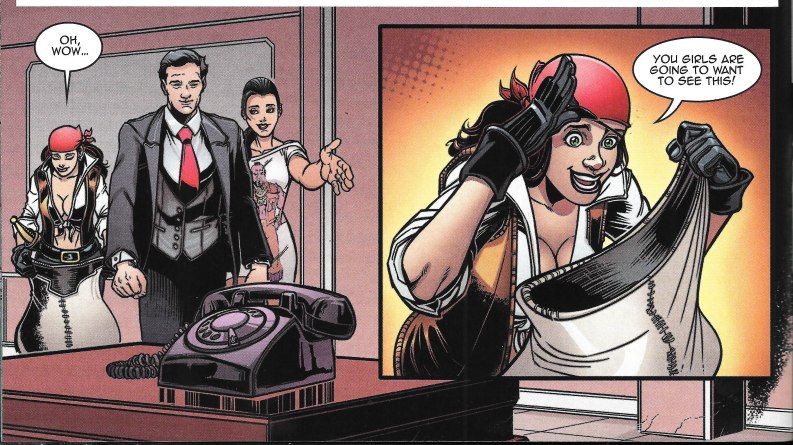 While Neil uses the phone, our soon-to-be-victims unpack their murderers-to-be and we also get a look at our current puppet cast. I recognize most of these guys and I think that with each movie they would add/remove a few as the novelty of certain killer puppets had worn off. 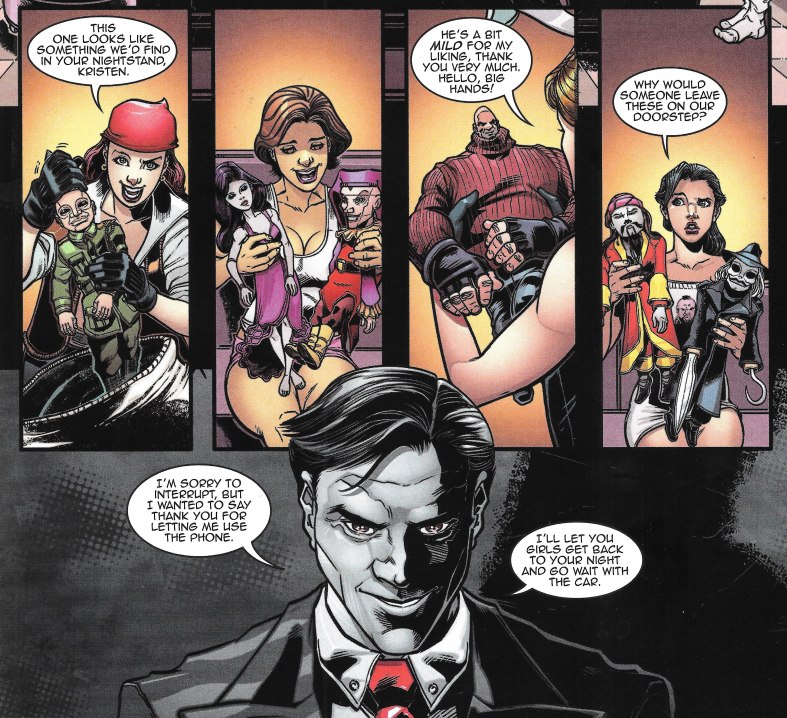 Yes, I just typed “novelty of certain killer puppets had worn off.” *sigh*

The girls won’t hear of Neil rushing off, because evil guys are also dashingly handsome in some cases. 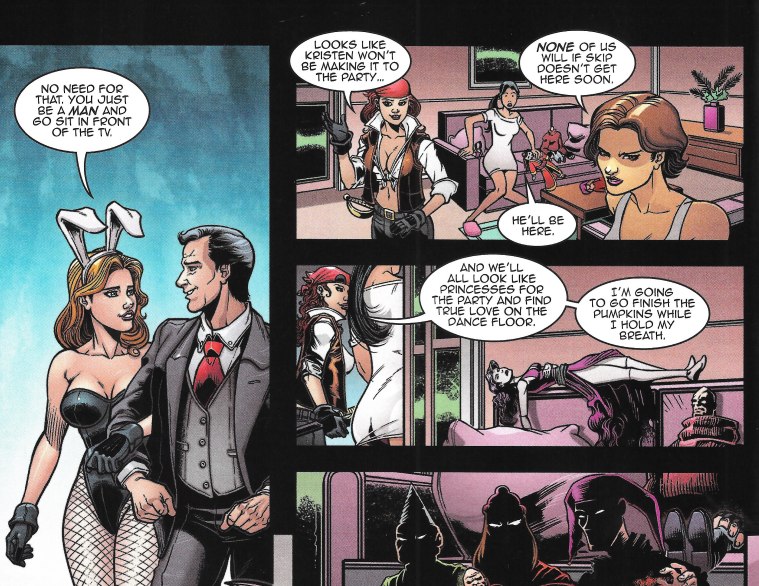 As soon as they are left alone, the puppets come to life, ready for blood! 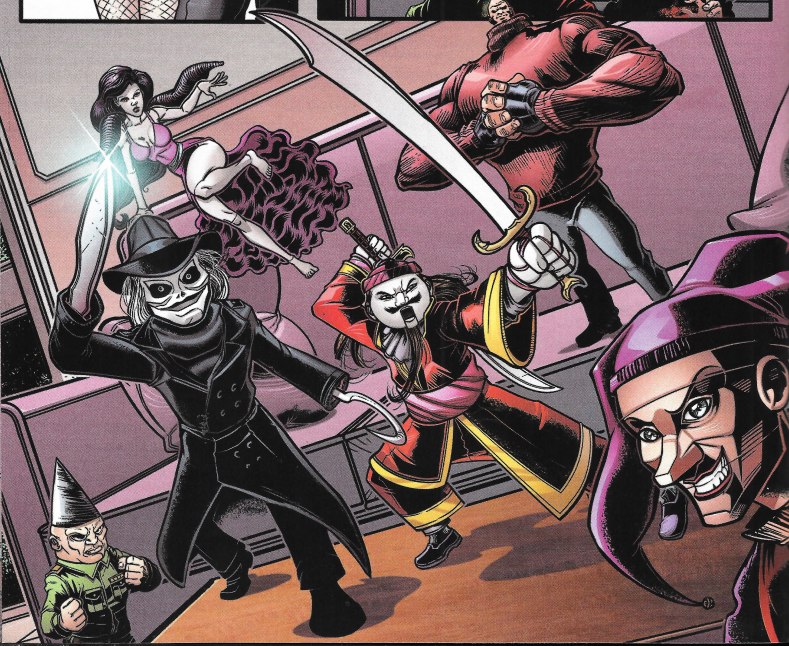 First off Neil dumps the dumb bunny trying so hard to land him for the night. She ends up sitting next to Pinhead, one of the more popular killer-puppets. He nabs a candy apple. 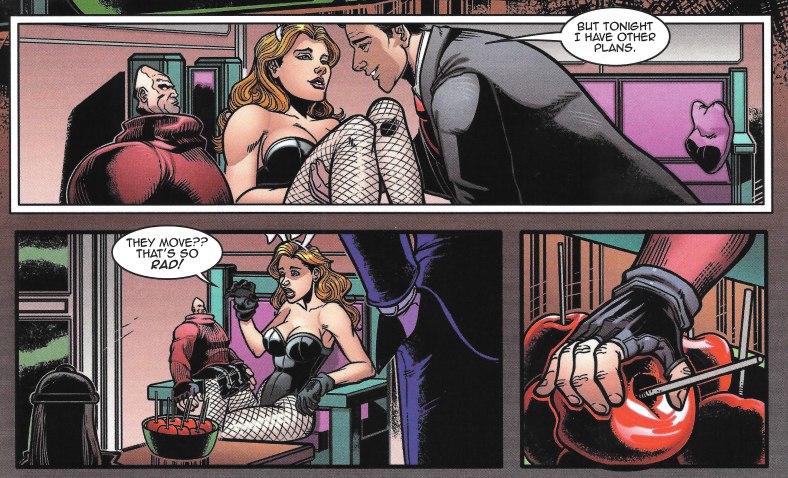 And jabs it into her mouth, killing her. Somehow. 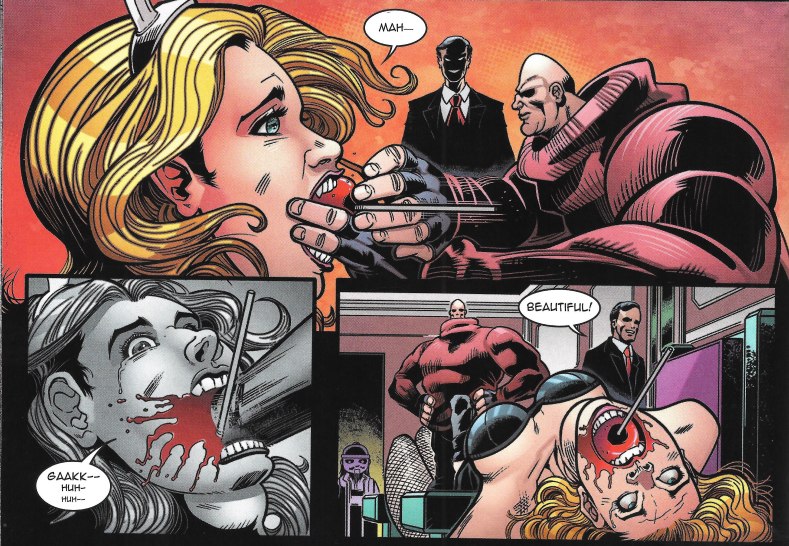 No, have no idea how that kills someone, but okay. The death count has officially begun. Moving on to the pirate carving pumpkins in the kitchen… 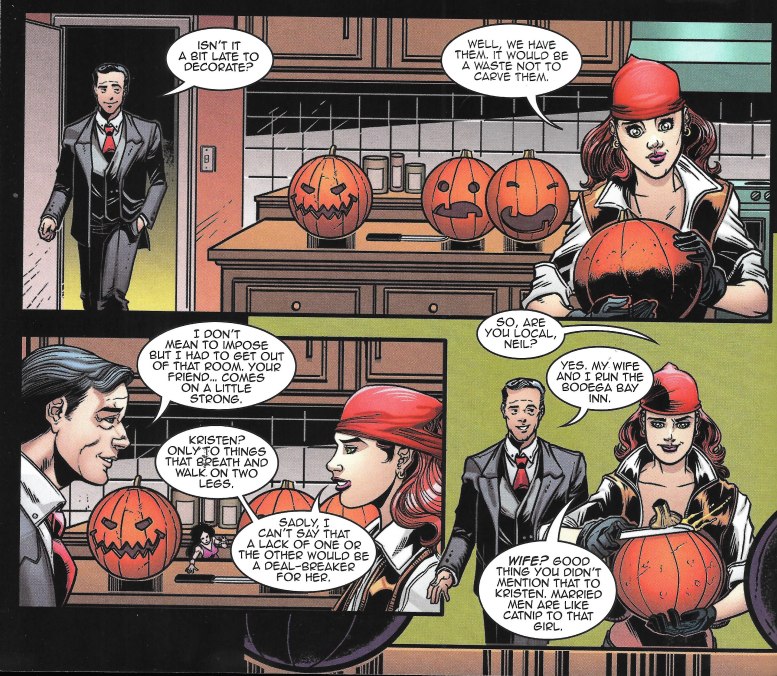 She gets an armful of leeches courtesy of Leech Woman… 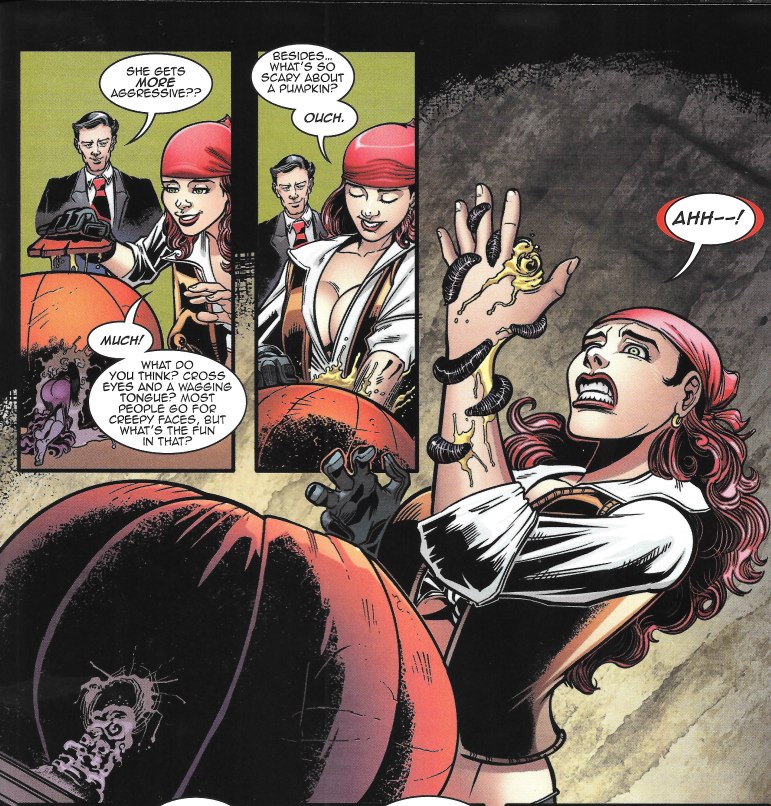 And then has a few spit on her face while Gallagher holds her down…and that kills her. Somehow. Again, I don’t understand. These are the most puzzling death sequences ever. At least in the movie Leech Woman choked the victim to death by spiting one down the woman’s throat. This just makes no sense. But whatever…again, moving on…

Laura and (insert unnamed sorority sister doing hair) are upstairs discussing where Laura’s date Skip is with their costumes. 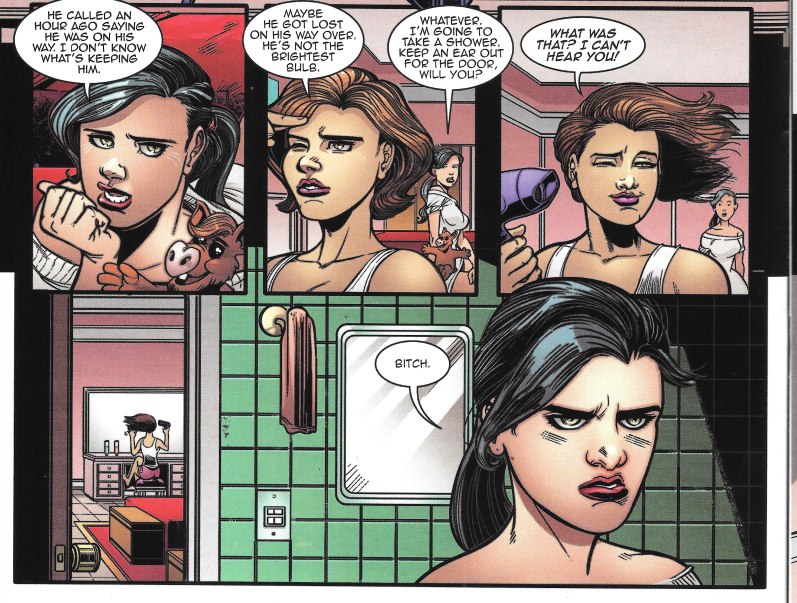 I’m saddened by unnamed Sorority sister doing hair, because she doesn’t warrant a name in this sad tale. She loses points by being a bitch by running her hair dryer which allows Neil to get the door. 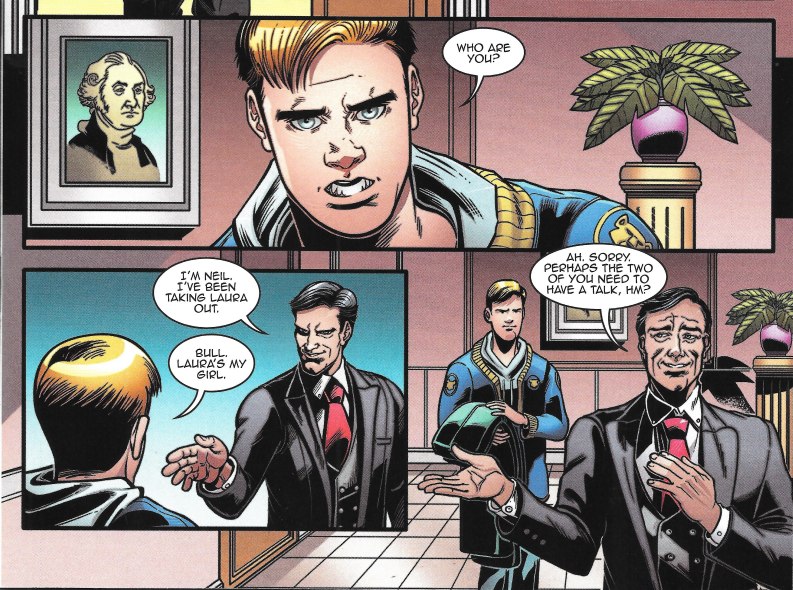 Skip wants to know who Neil is. Neil does his best to get a rise out of college student and then leaves him in the study with Tunneler. 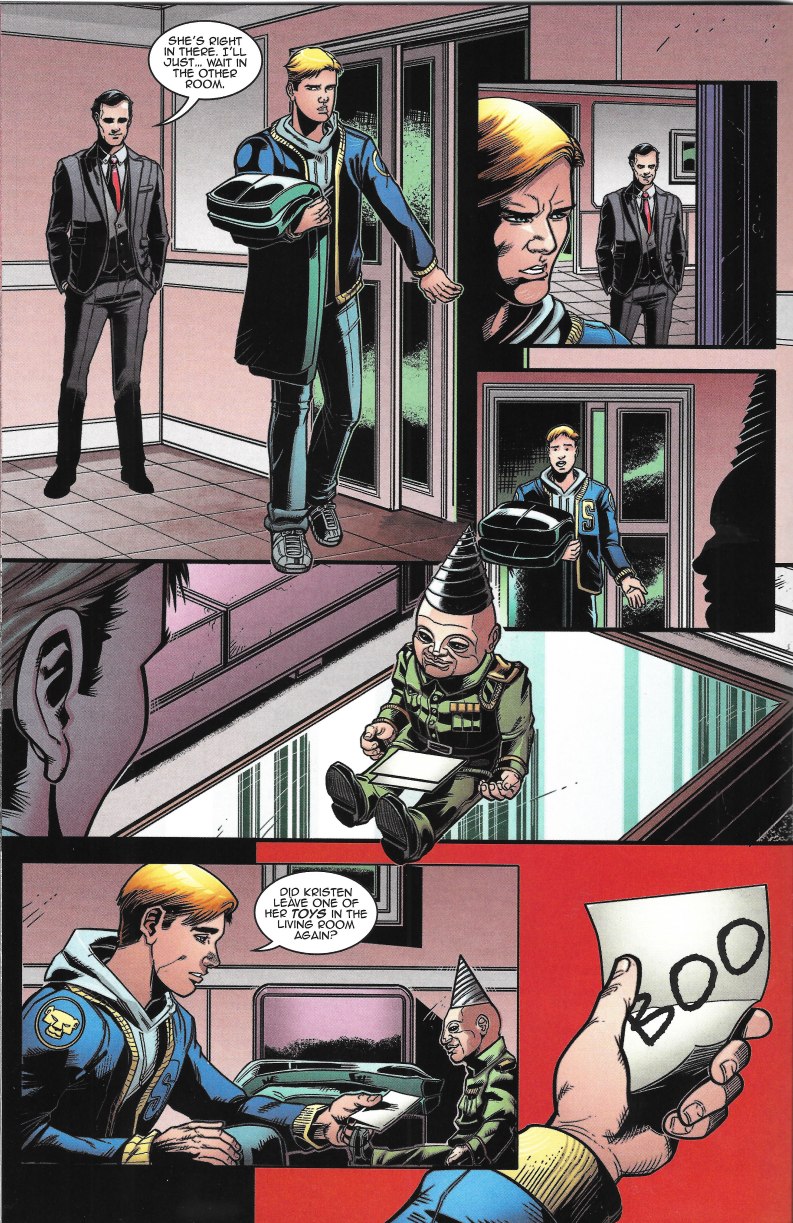 …which ends exactly as you would expect it to… 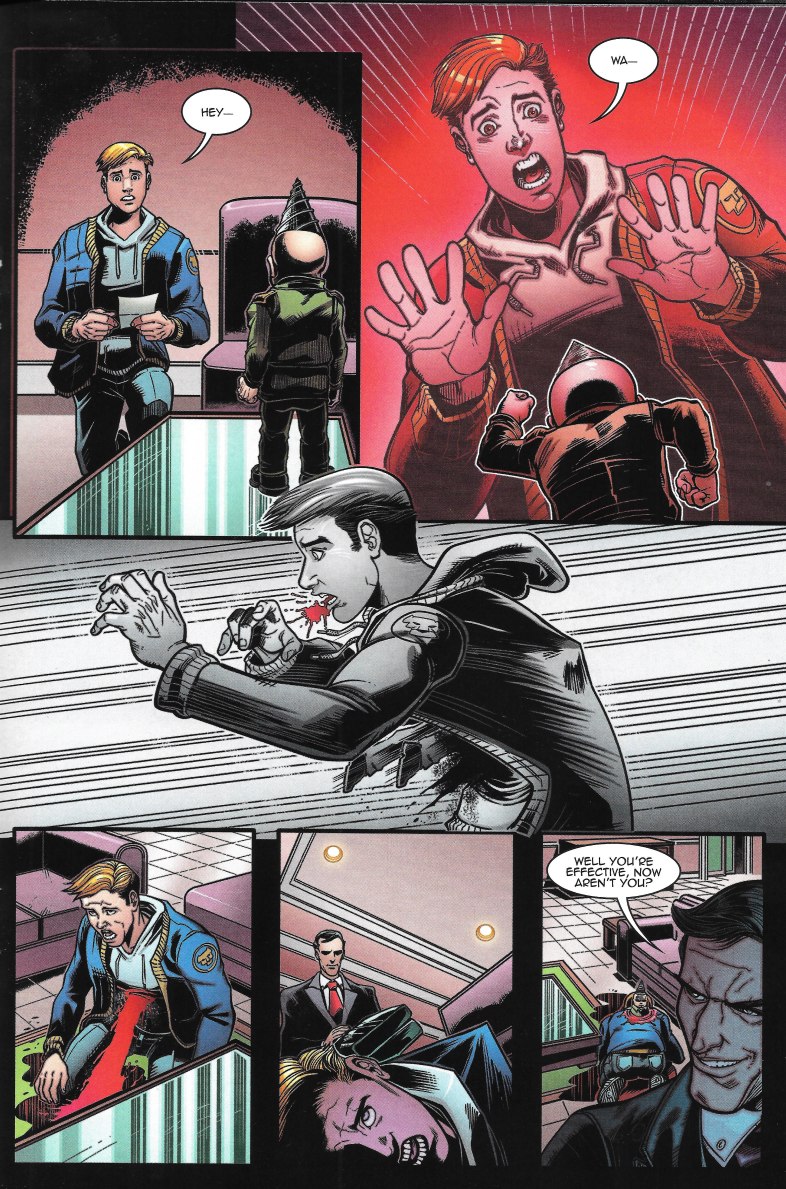 I get the feeling this is the first time Neil has used some of these puppets. Almost as if he is trying out each one’s powers. And of course, there are still a couple more he hasn’t tried out yet. Luckily there are still two girls left in the house, Laura and the victim to be named later.
Unnamed girl is up first, however. Neil sets up a little face-off between her and Blade… 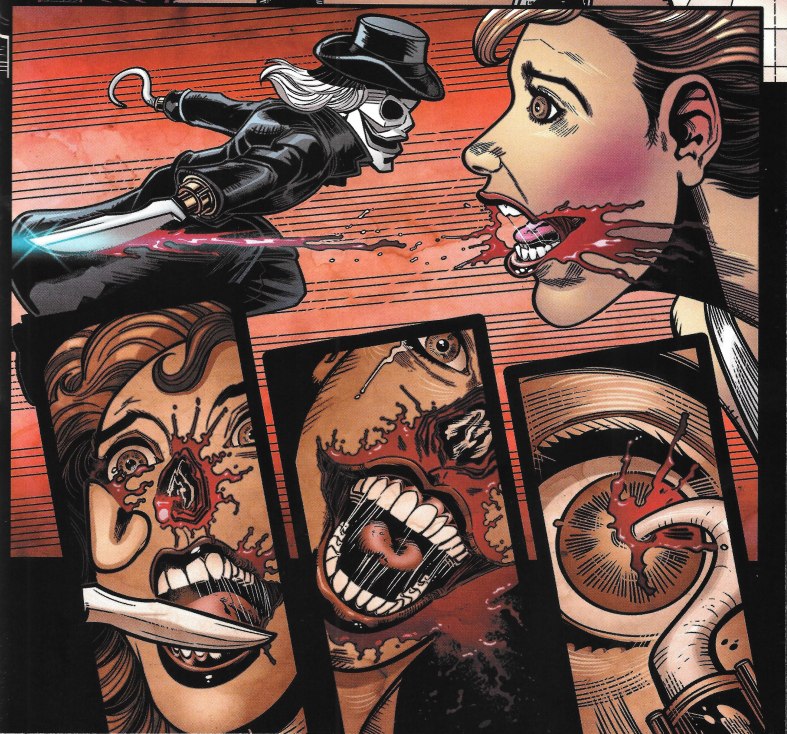 … which ends up with her face literally being taken off in an extremely grisly fashion. I really thought Laura would be the one left alive, and I was proven right. So off to see if Laura survives... 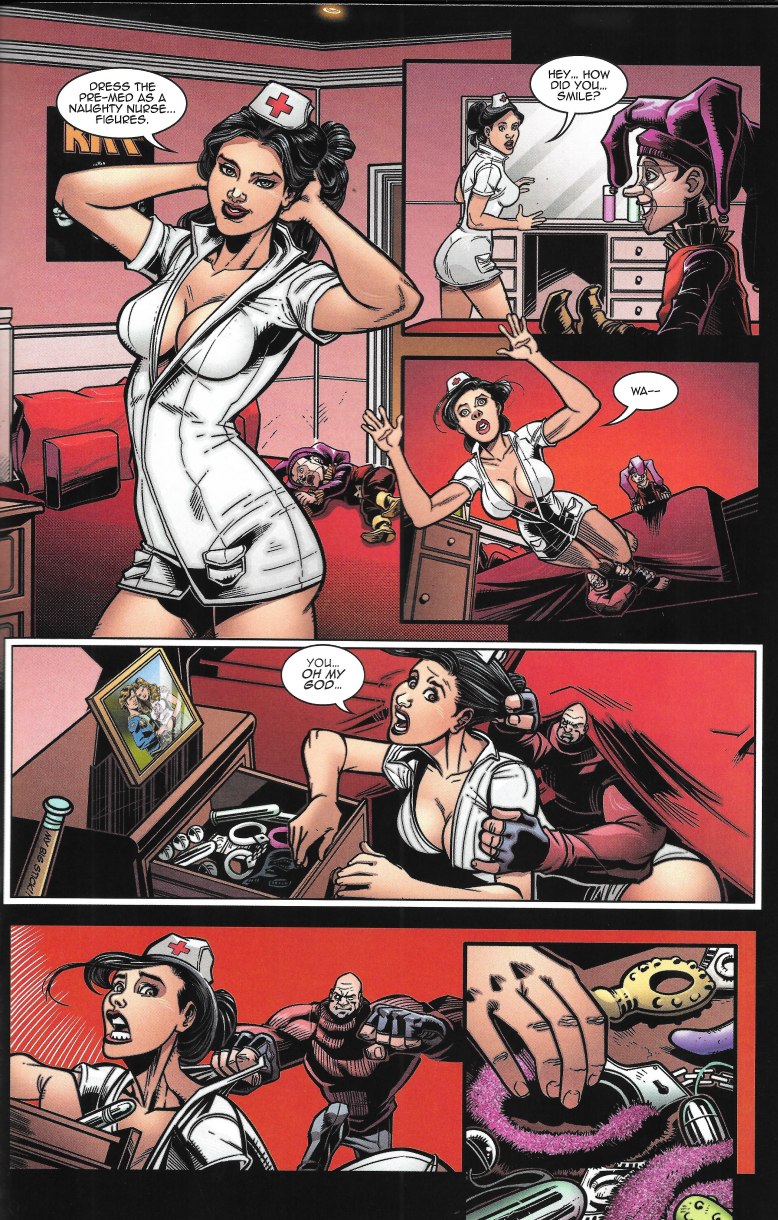 She does get to dress up in a sexy nurse outfit first and then she is manhandled by a few of the puppets. To give us hope, however, the writer allows this young lady to manacle pinhead to a bedpost and make a beeline for the front door… 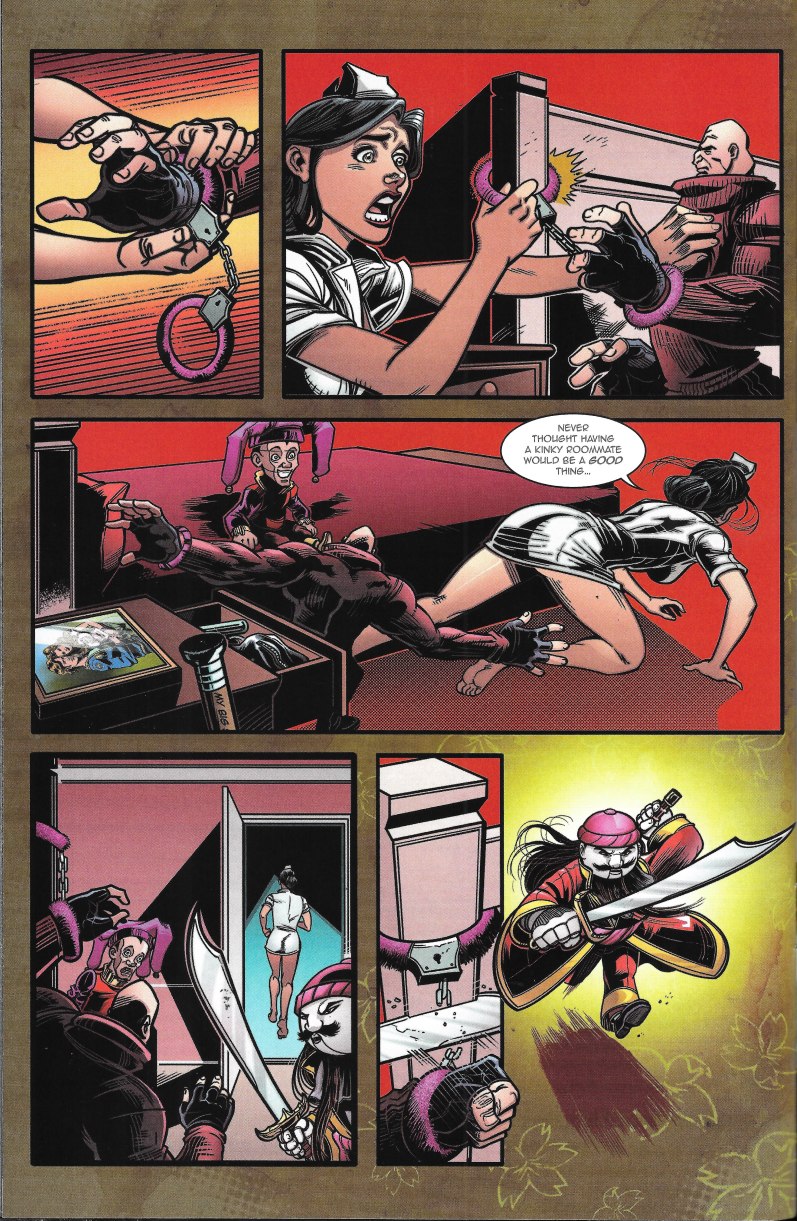 …And then Shreddar Khan punctures both lungs before she makes it downstairs. 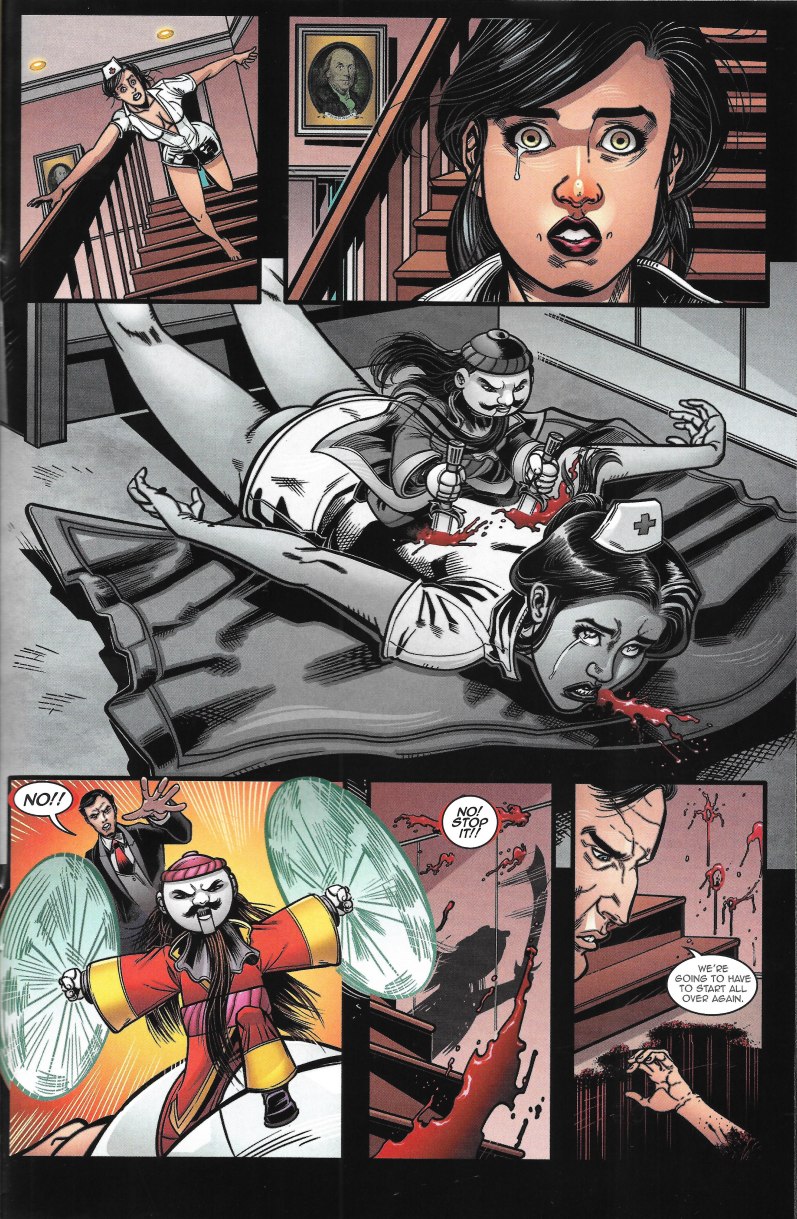 So much for their being a plot to the book that is any more than the movies. Even Neil seems upset. Why would that be? 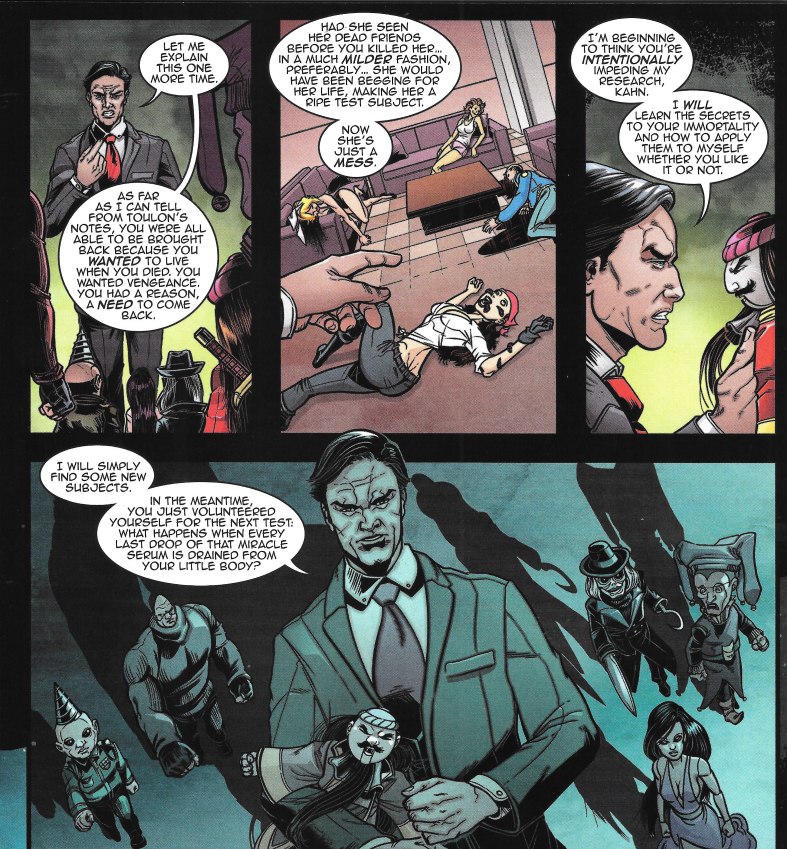 Okay, I guess that makes some sense. Not a bunch, no. But some. I suppose I need to watch a few of these. Luckily I was just at Wal-Mart and noticed the first nine movies are on a DVD bundle pack there…

…for nine dollars. Seems about Crapbox pricing.
Posted by SonOfCthulhu at 3:36 AM