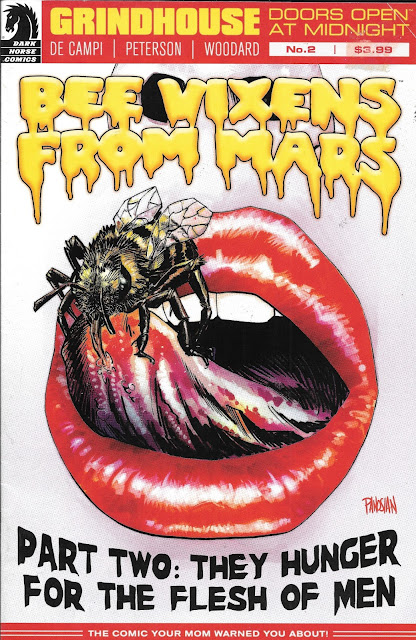 We left off last issue with Garcia being accosted by a horde of bee vixens streaming from the church because she had set fire to the beehive which supplied the extraterrestrial honey that turned the townswomen into lesbian insect creatures.

Got all that? Good, because we are off at a trot in this one, folks. 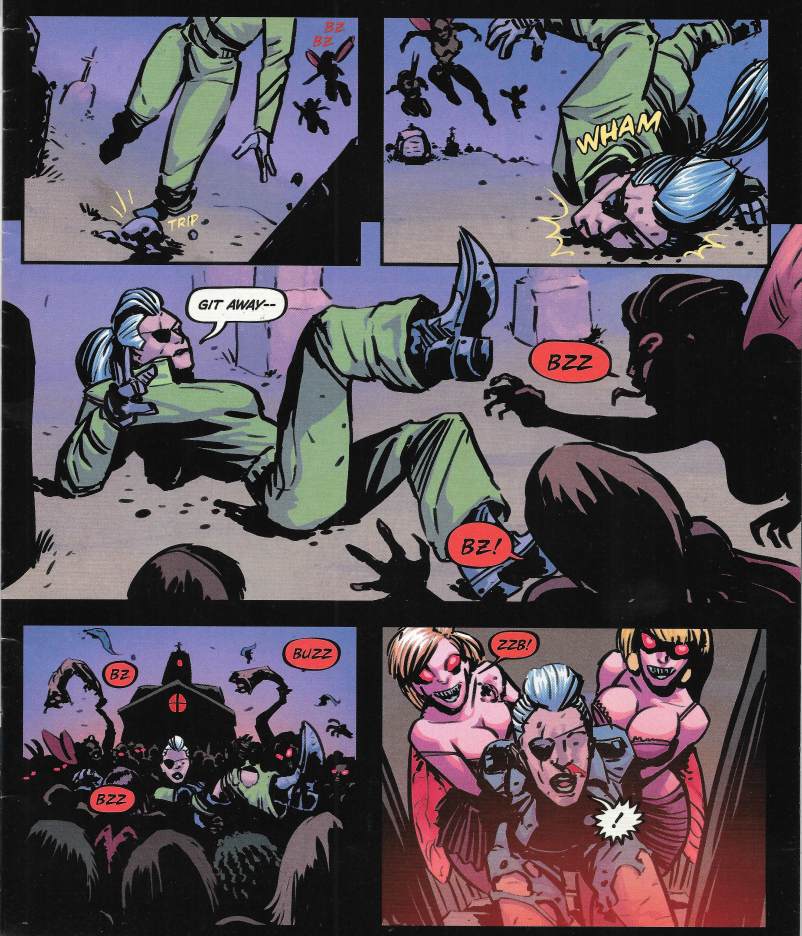 Garcia falls and the bee women jump all over her. Before she knows what’s buzzing, she’s carried back into the church. 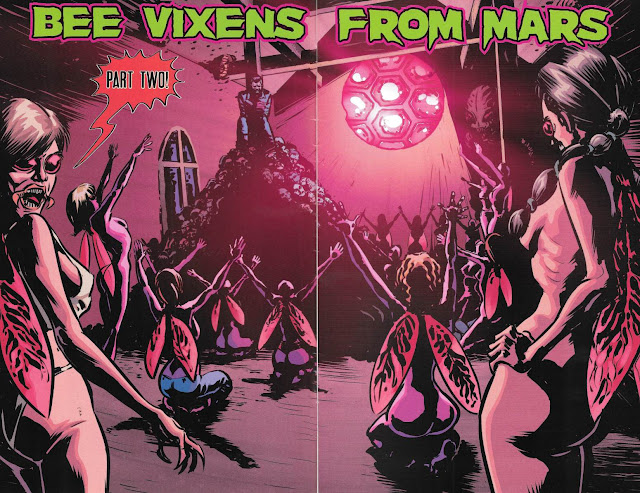 Whatever she might have been expecting, seeing Jimmy trussed up like a witch about to be burned at the stake seated atop the dismembered corpses of the entire town’s male population while hordes of naked mutated insect women prostrate themselves before him and their alien bee hive probably was not high on that list. 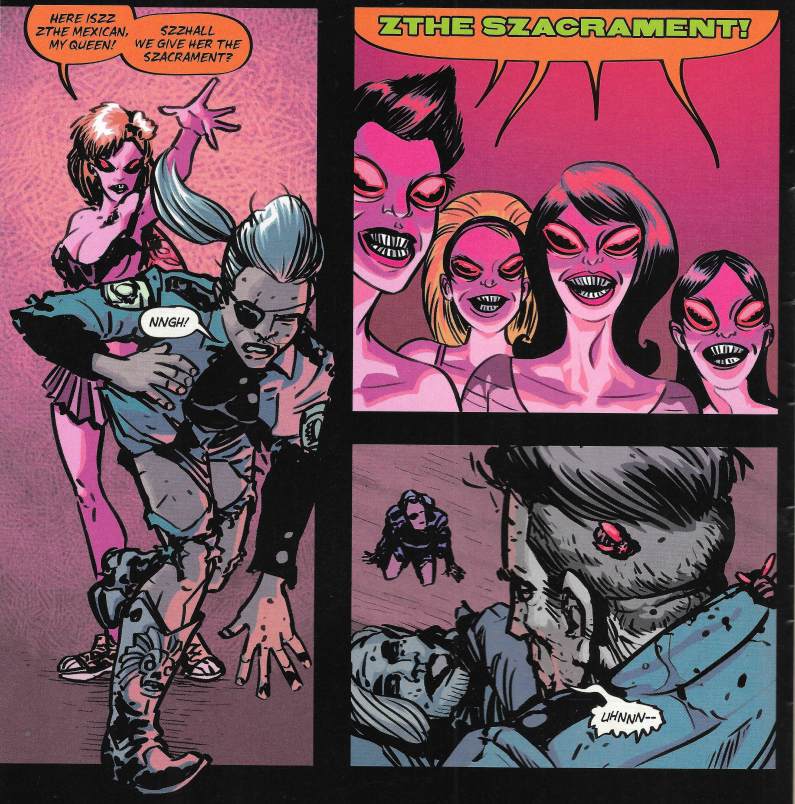 The bee women start talking about giving Garcia something called “zthe szacrament!” which I would assume means alien bee honey, turning her into one of them. Garcia only wants to help Jimmy though and for trying she gets her legs knocked out from under her. 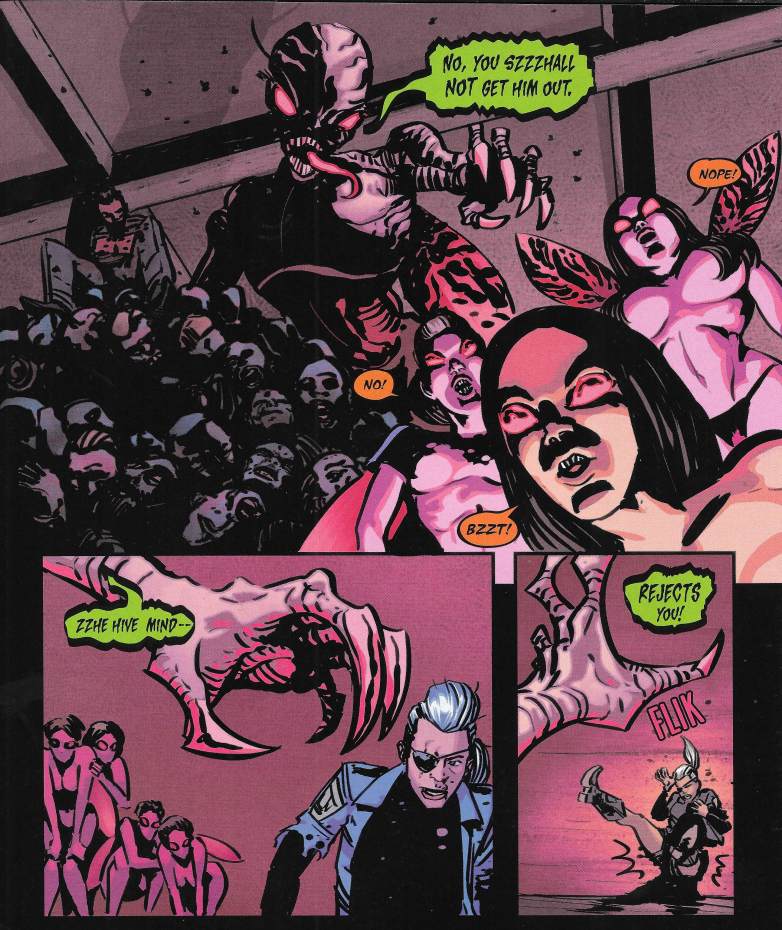 But the alien queen bee denies her followers request and decides Garcia isn’t worthy of becoming a mutant man-killing insect-thing, much to her chagrin. I guess bee vixens from outer space are kind of like the popular girls clique at school.

Then the book goes from crazy to downright bat-shit fucking insane, as Garcia whistles for help… 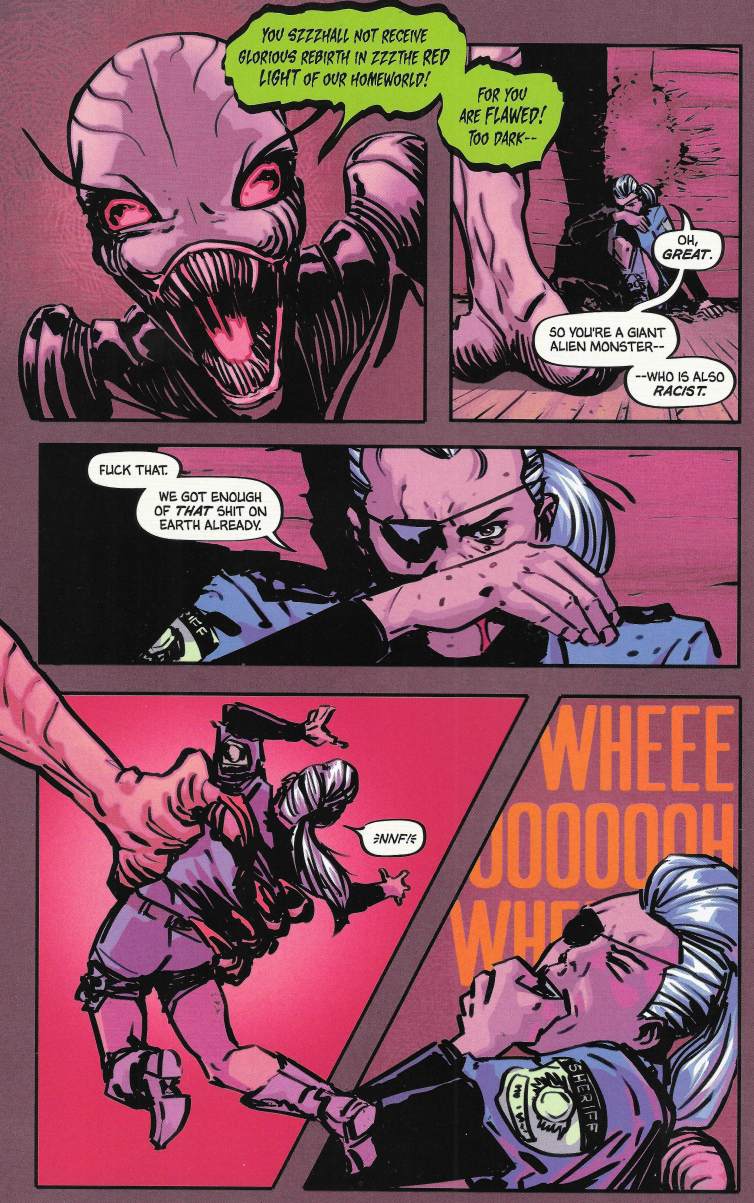 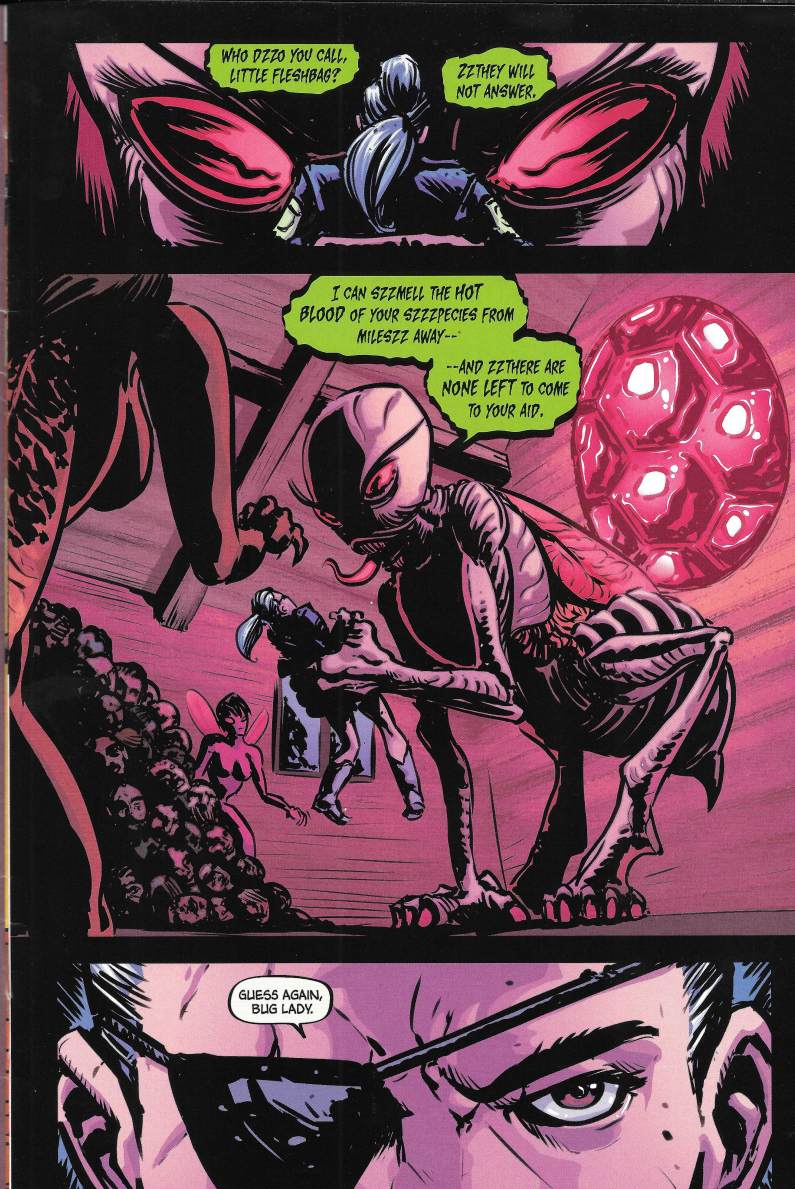 …but her tweet calls her MOTORCYCLE…ha, ha, ha! Yah, you got me there, guys… 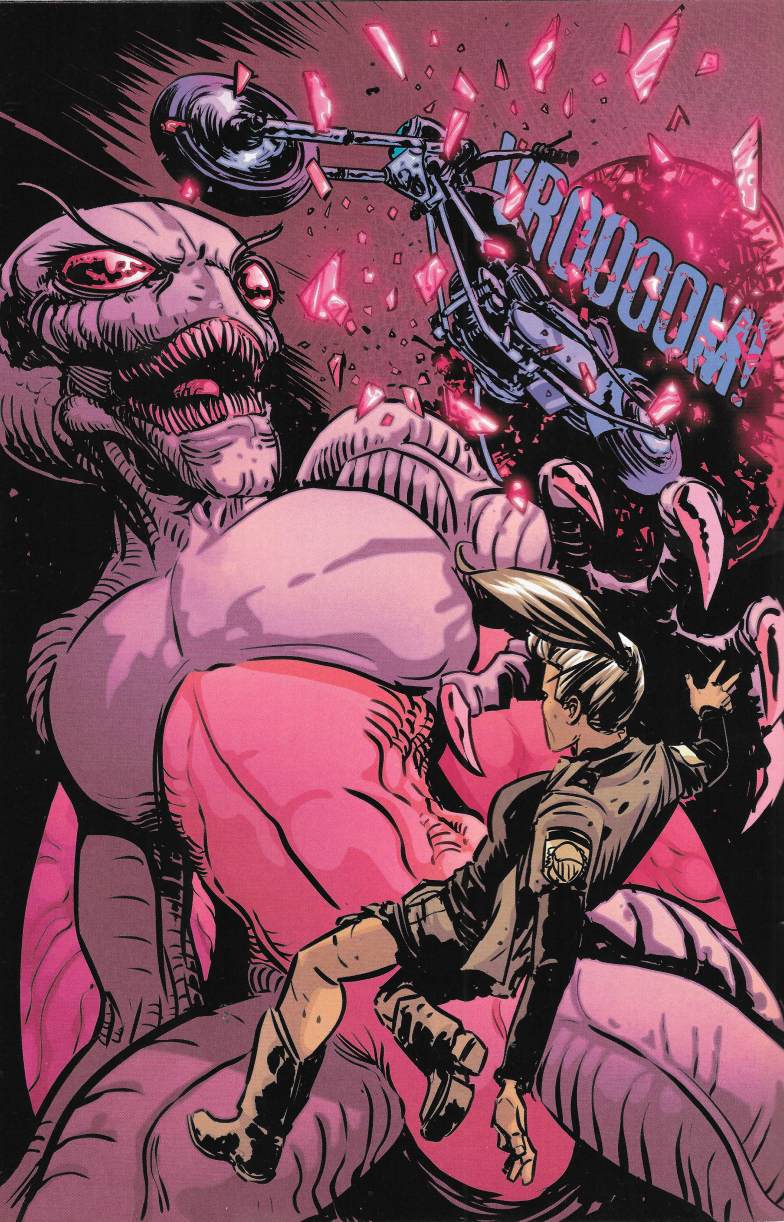 …which runs over several bee women and brings her shotgun to her. 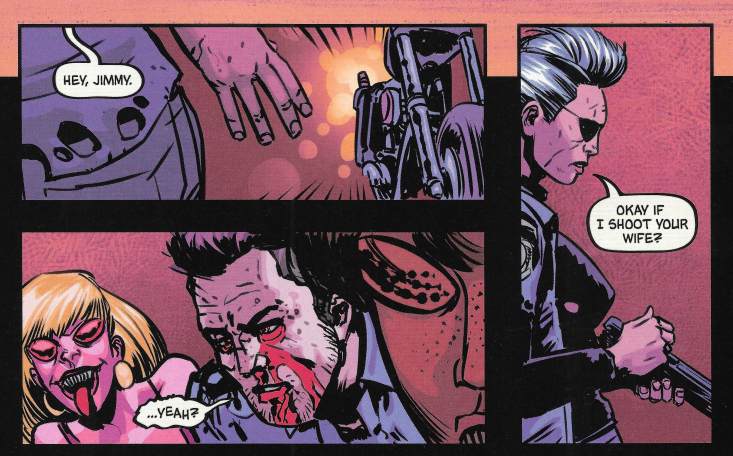 And then the FUN really STARTS… 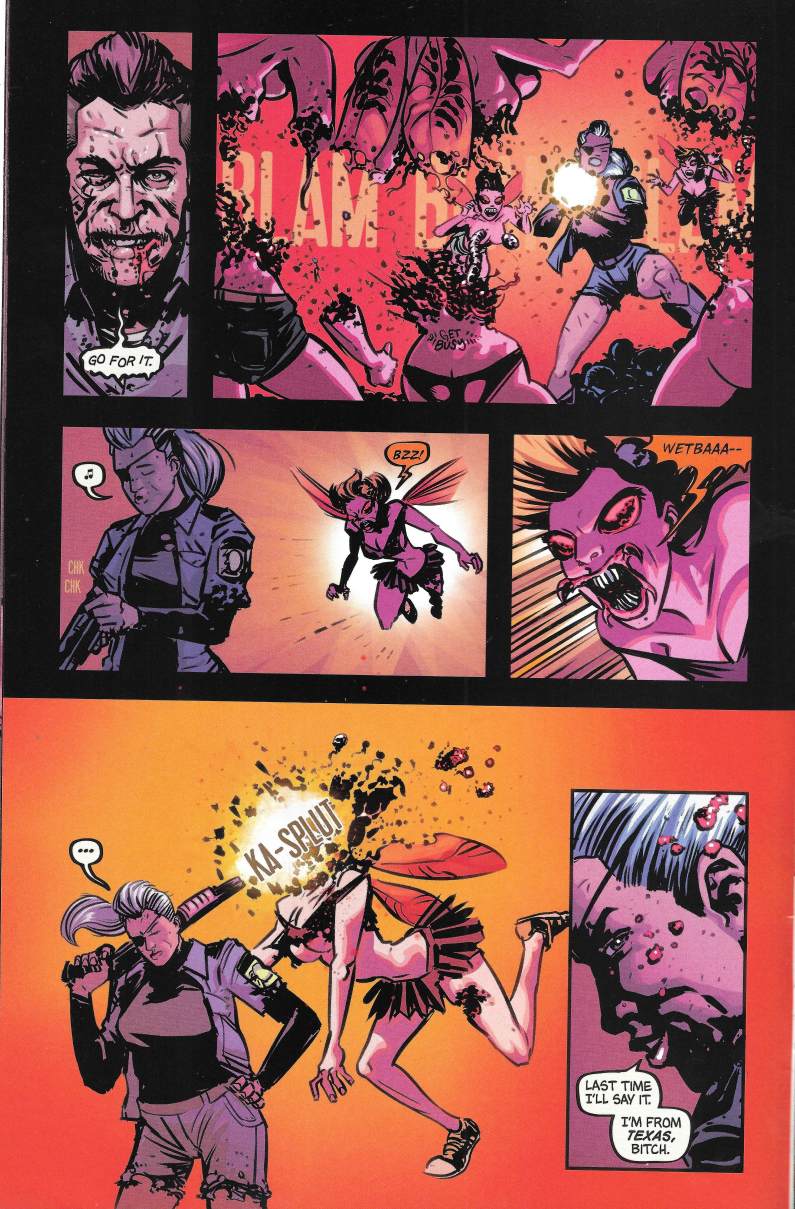 Machete eat your ever-lovin’ heart out. I mean there is over the top and then on top of that, there is this. And I’m grinning at all this insanity. This is the way those b-movies wrapped things up to. Completely crazy. 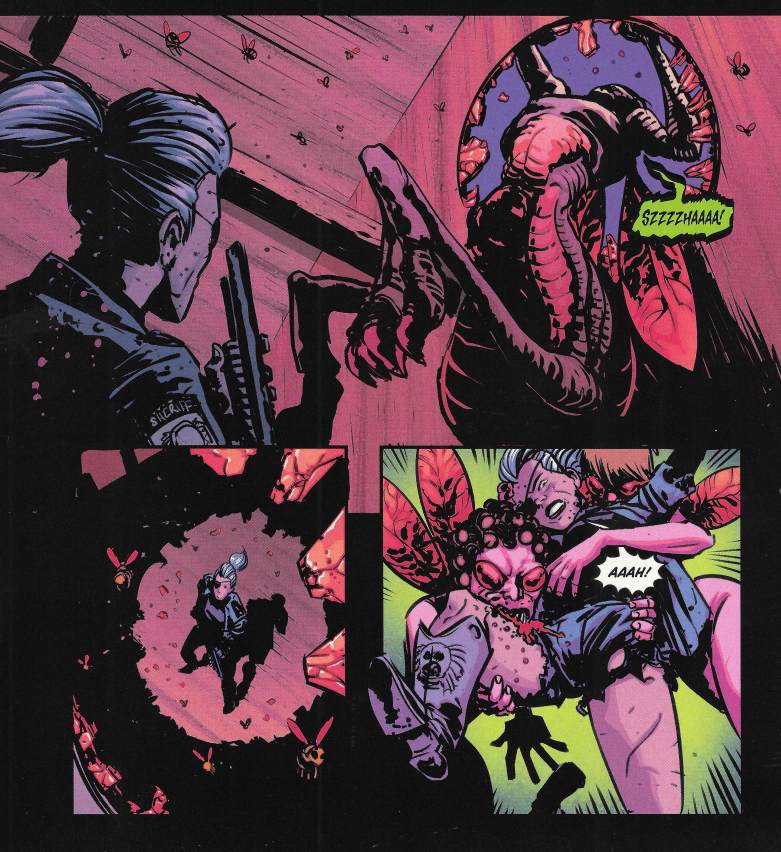 The alien queen escapes, Garcia starts getting bit, and the action is just all over the place. 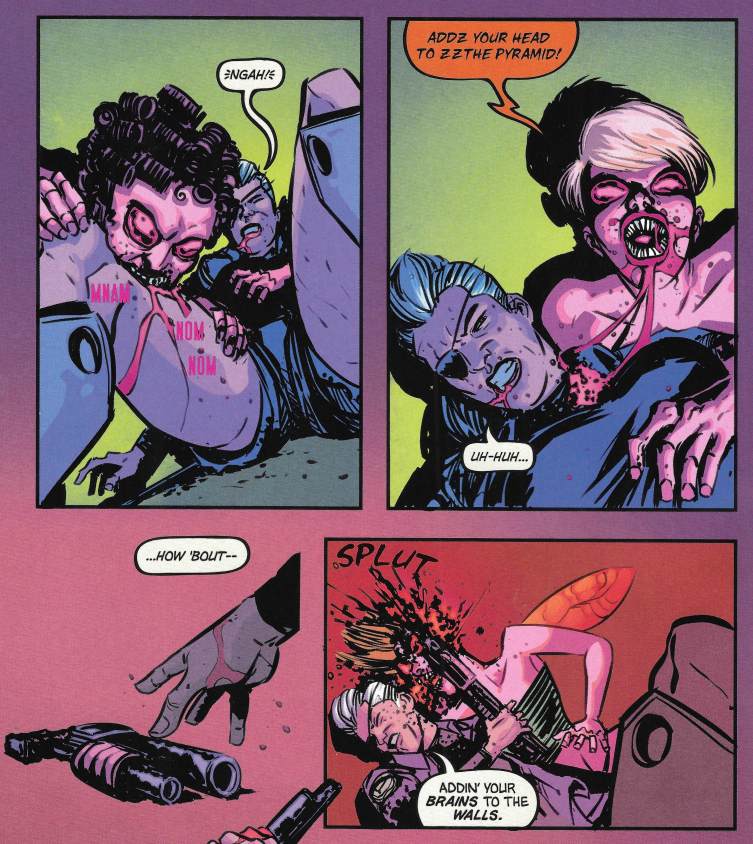 Nuts, but in a way that I can’t help but love a little. 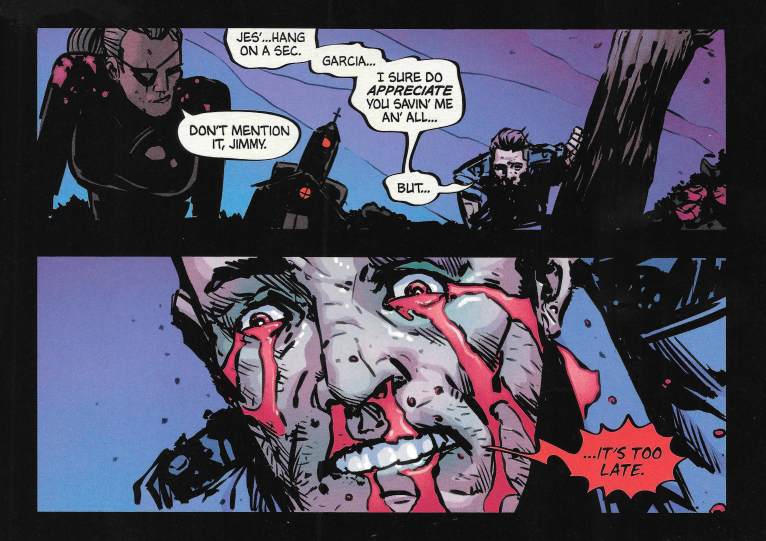 She rescues Jimmy, but in typical sci-fi fashion… 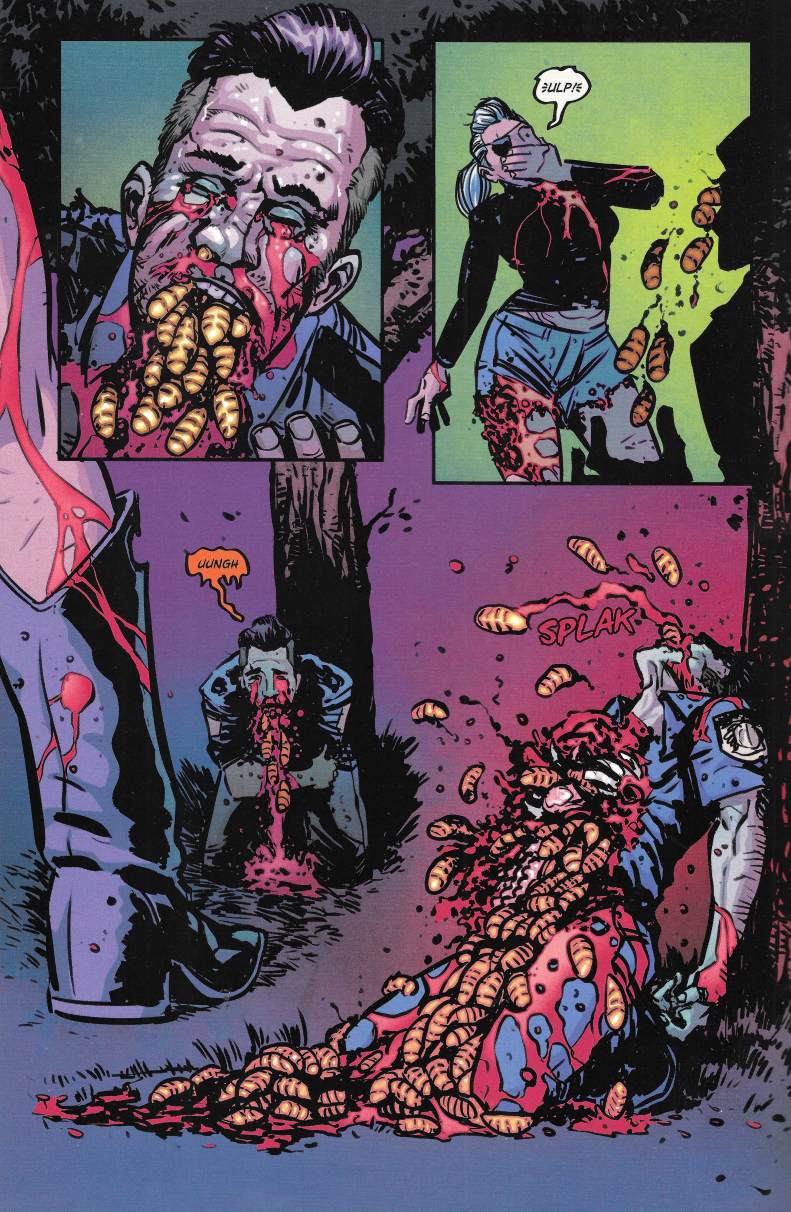 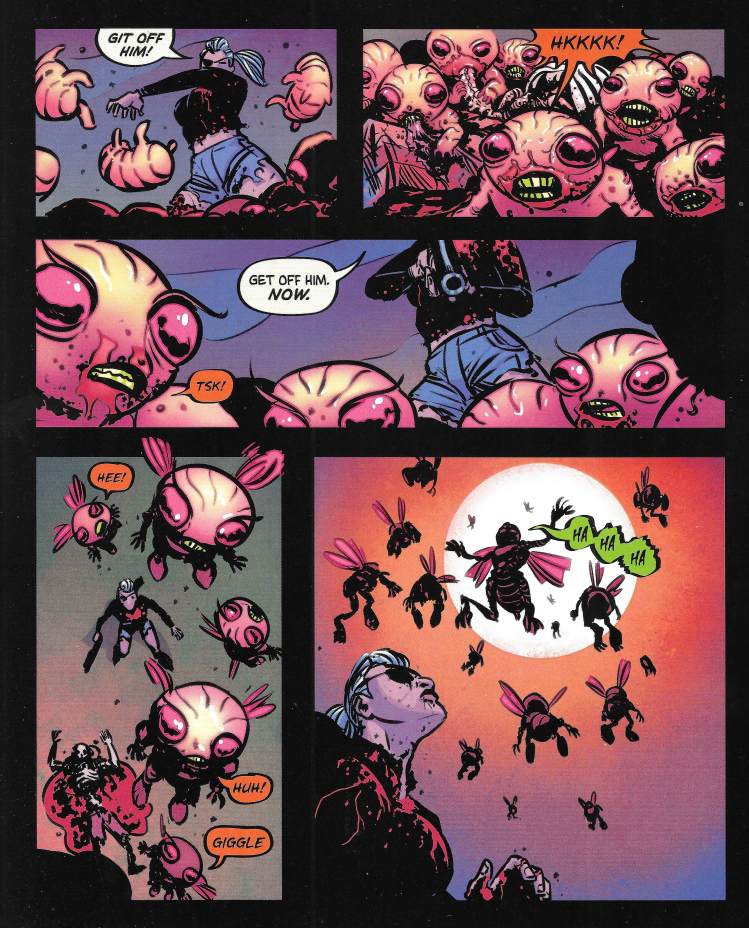 Yuck. That’s worse than Alien, if you ask me.

The little maggot girls fly off with their mom and you can see the vengeance smoldering behind Garcia’s eye patch.

Next morning, a car full of travelers wanders into town… 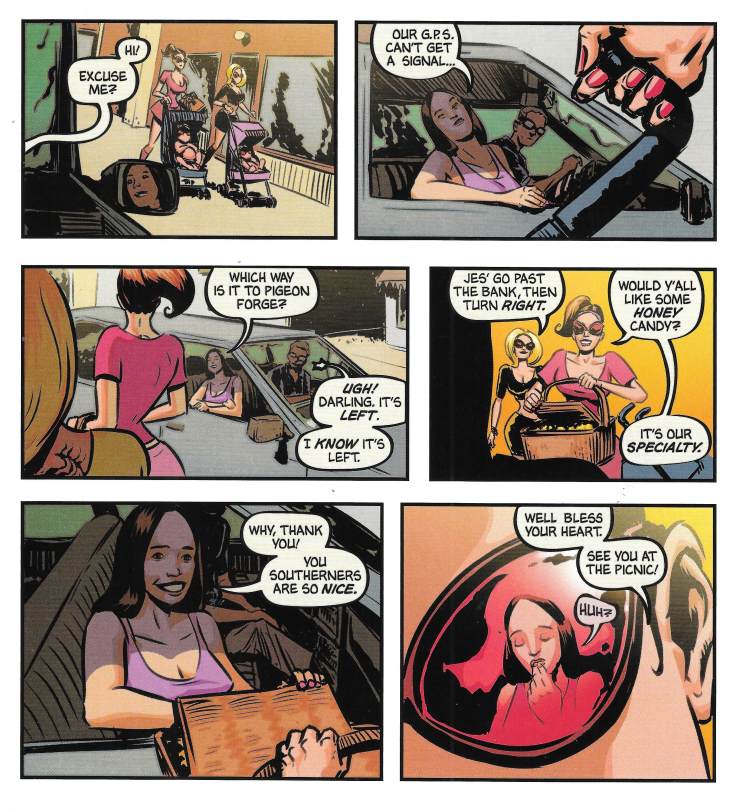 …which goes exactly as expected… 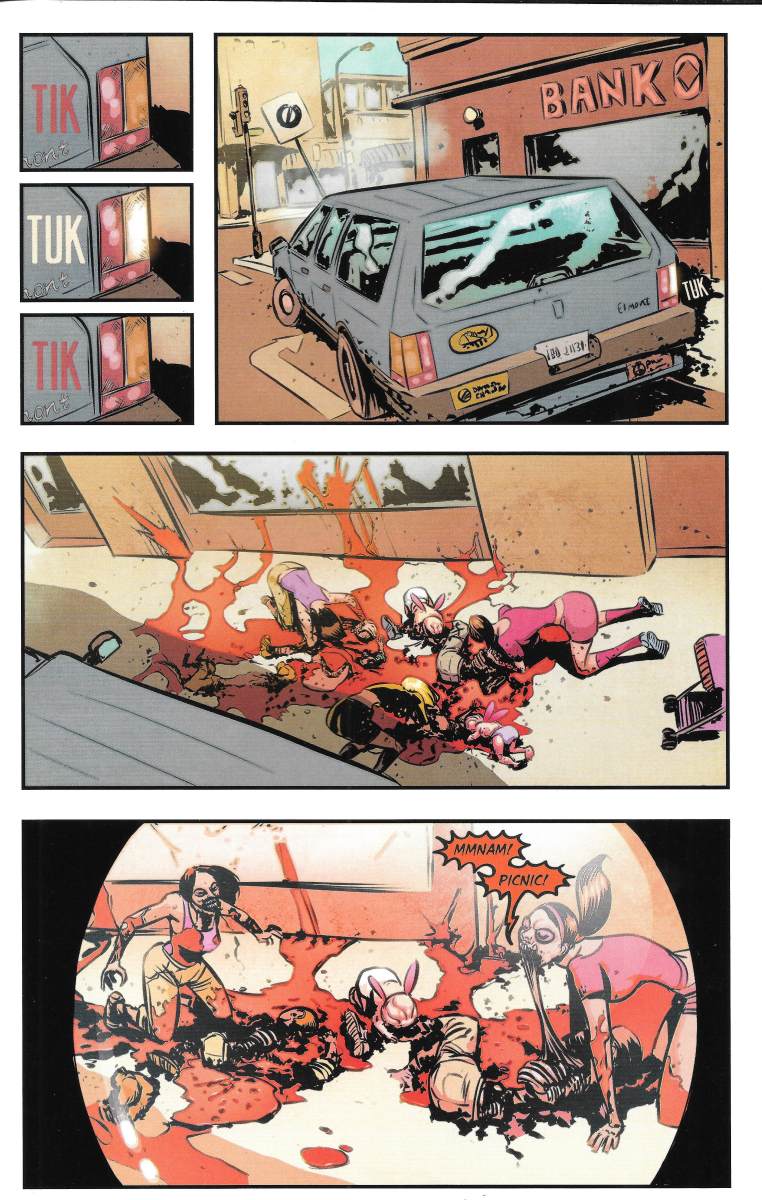 …Garcia has all this in her sights. She heads down to the local gas and sip, where Jimmy picked up those beers… 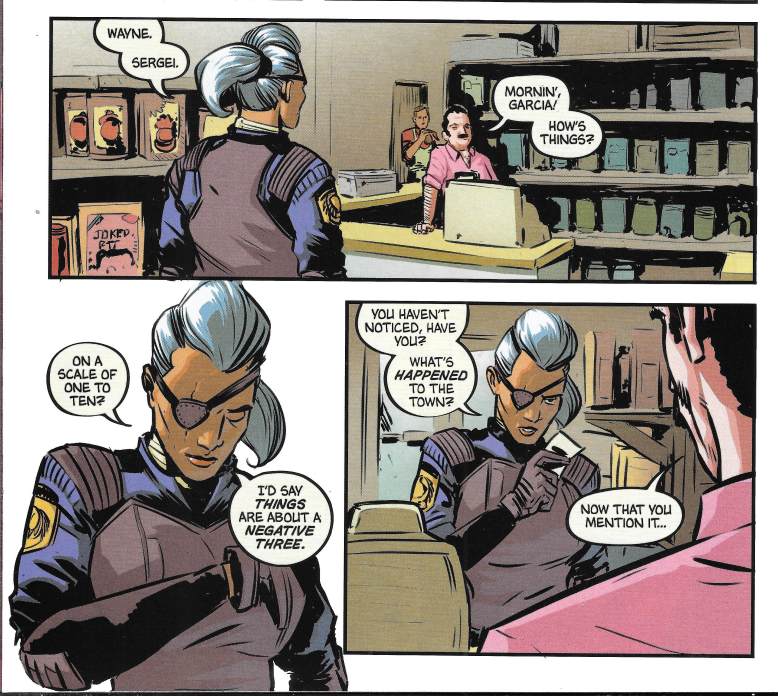 Wayne hasn’t noticed and Garcia pulls no punches as to why he hasn’t. 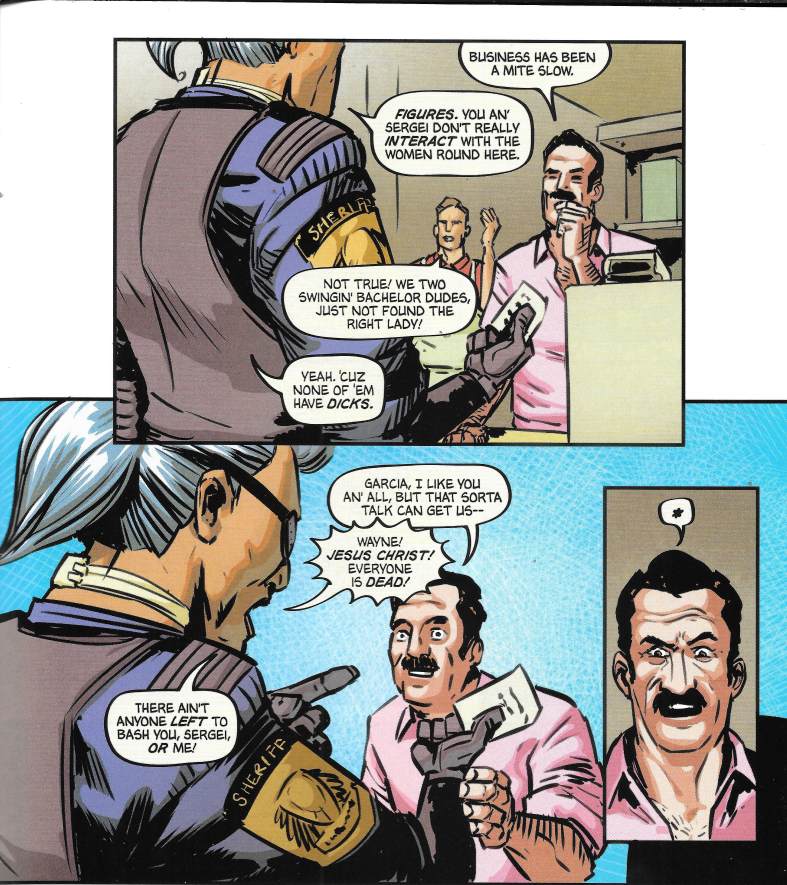 She has a list of items…rather unconventional items…that Sergie and Wayne rush to fill.

With that she uses herself as bait… 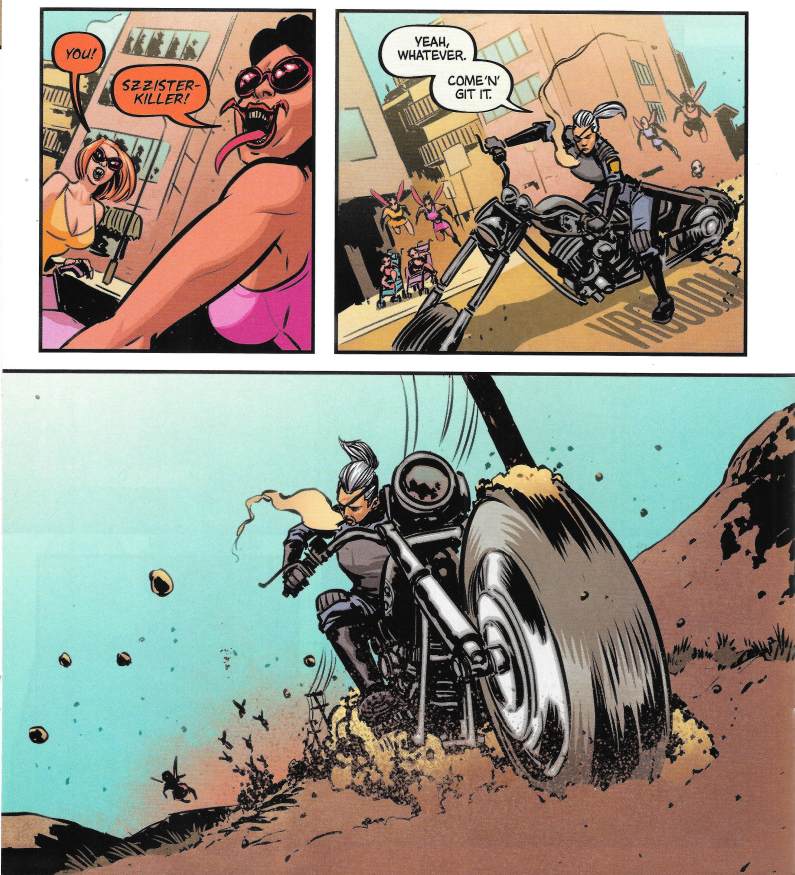 Bringing back a horde of bee vixens trailing her to the gas and sip…. 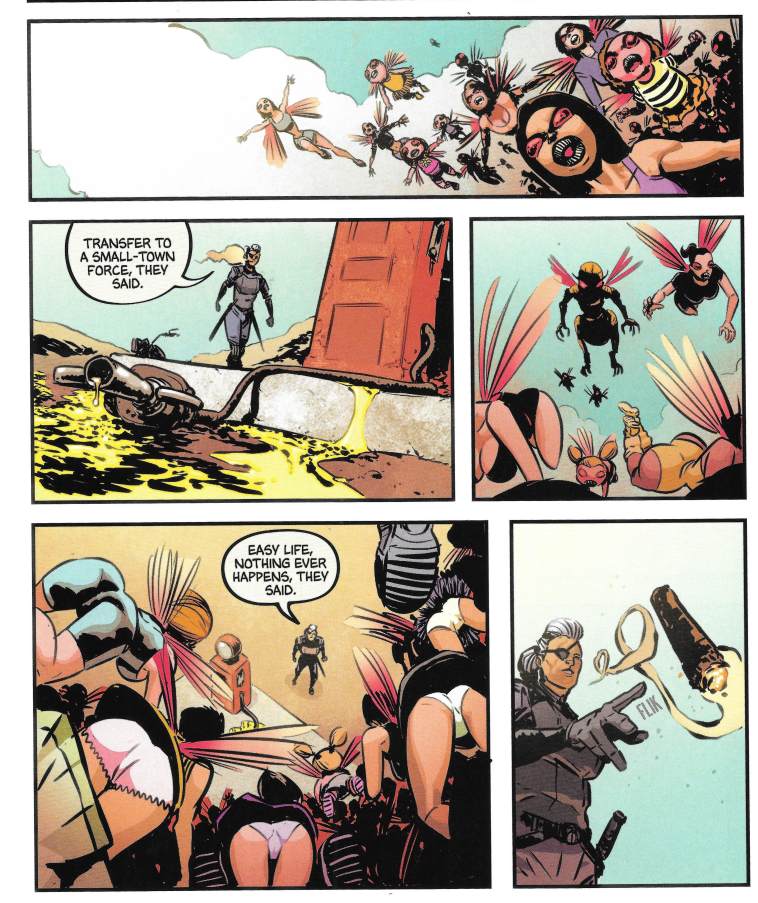 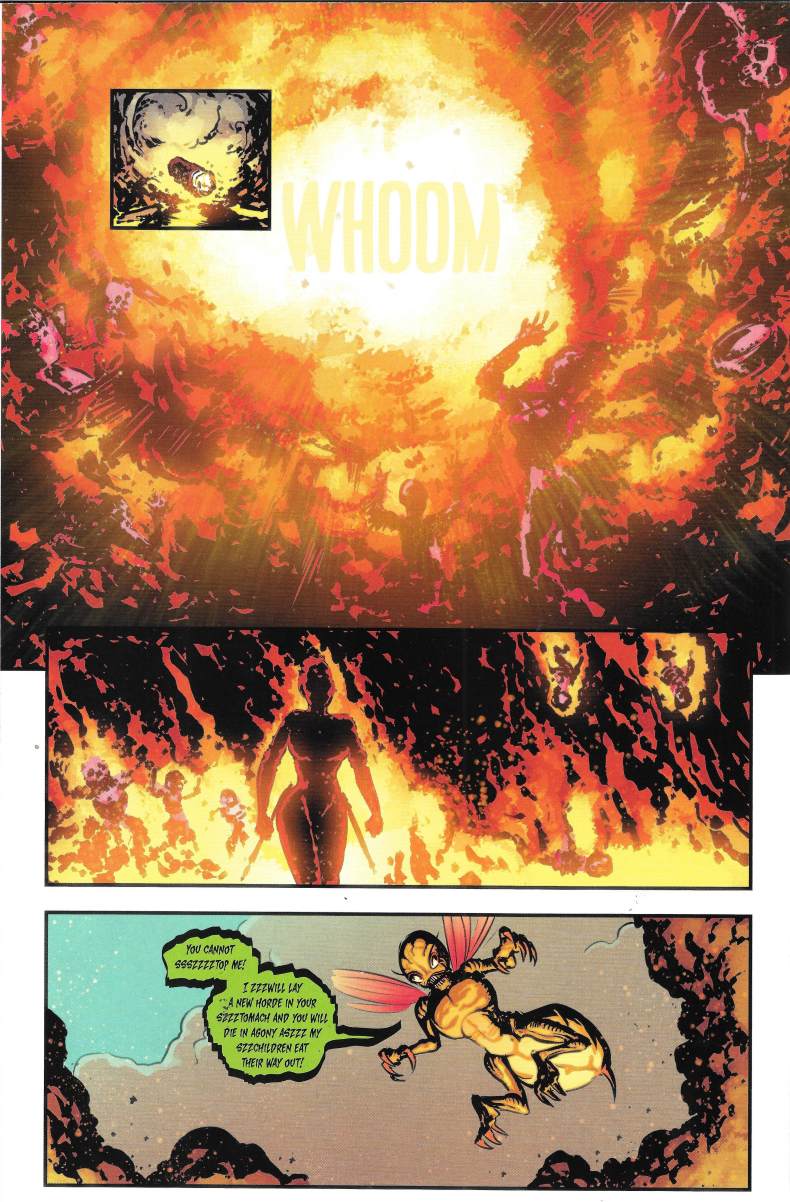 But she’s no match for a “Bad Ass Chica”. 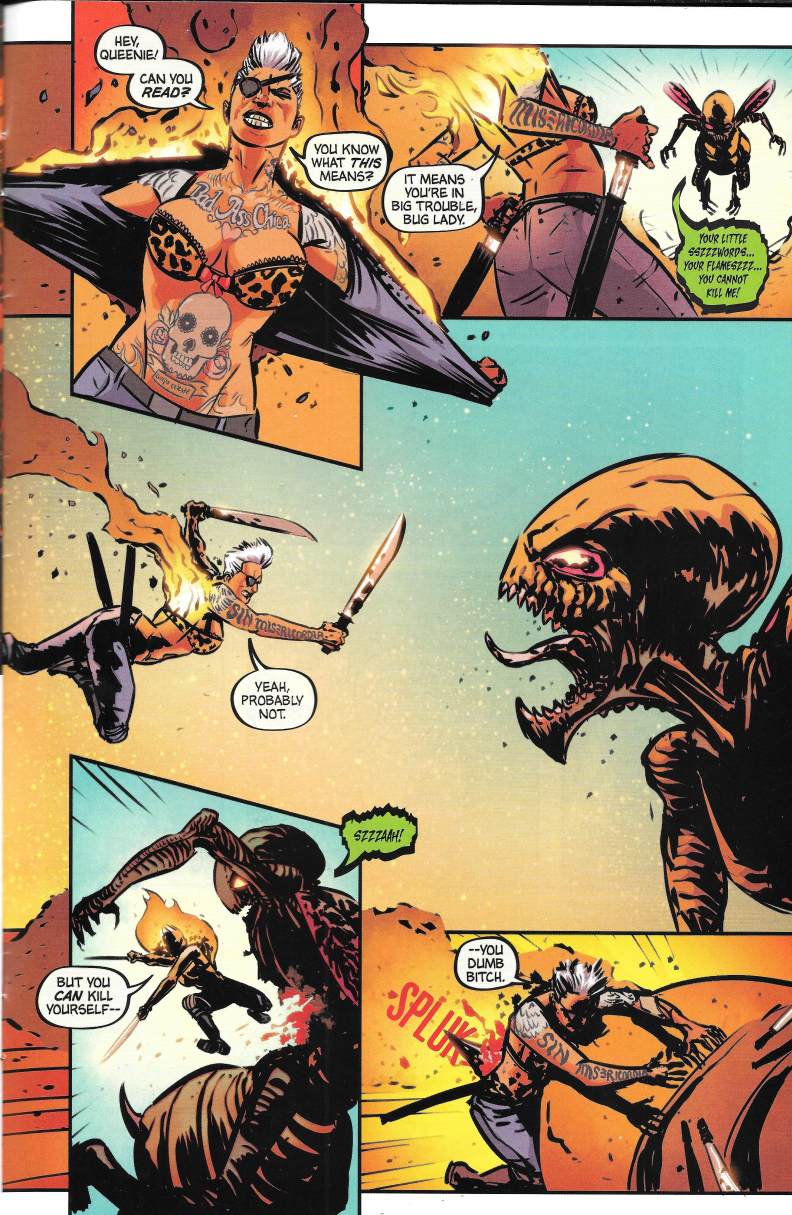 And that is how you kill an alien killer bee. 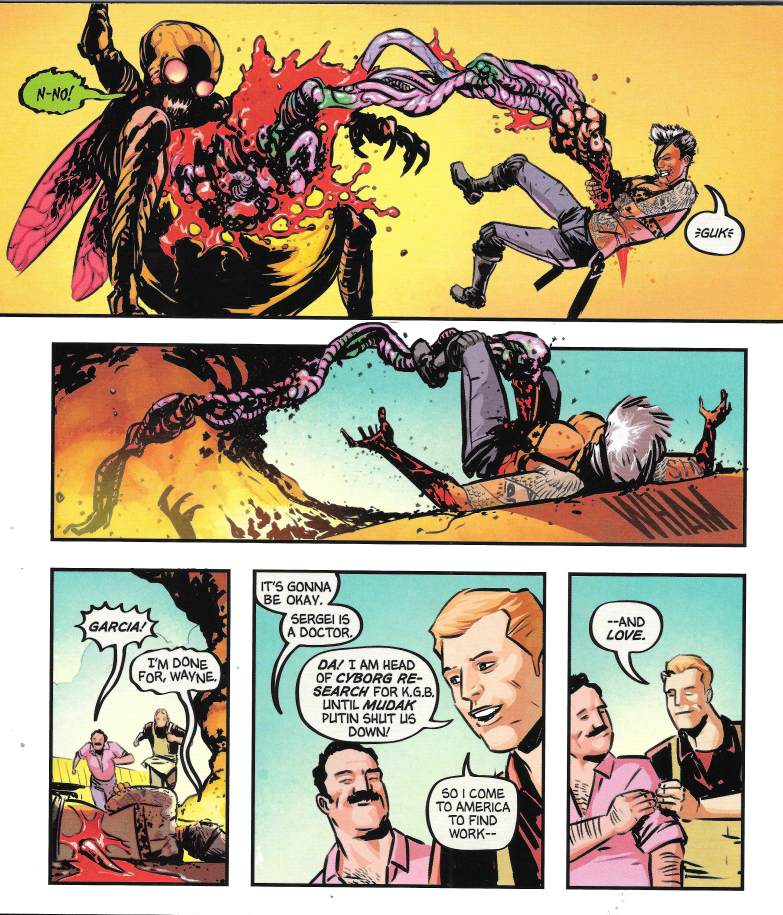 Not to worry, as Sergie and Wayne take Garcia and put her back together again. And with that as our exit lines, we bid the Grindhouse goodbye for now. If you enjoyed this half as much as I did, remember that there are three other two-part tales out there from Dark Horse, all from the same writer. Happy hunting!
Posted by SonOfCthulhu at 2:36 AM