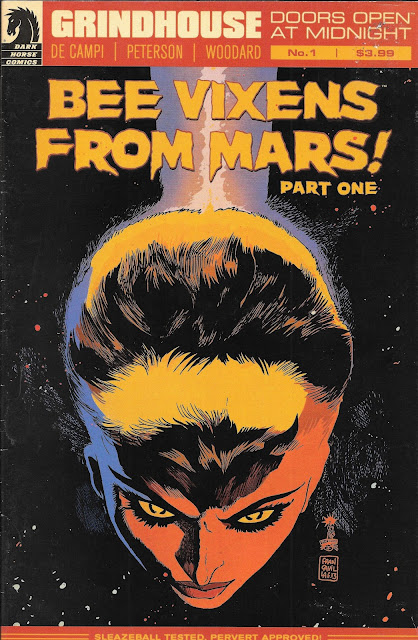 Grindhouse is an American term for a theater that mainly shows exploitation films. They quickly became associated with low admission fees and, owing to the cheap prices, showed films of poor quality or low artistic merit in order to recoup their money. Most of these movies were horror in one form or another.

In some cases, the theaters would show double, triple or “all night” movies for a single admissions charge, which encouraged the audiences to spend long hours in the theater. Because they were a favorite with poor or lower-class audiences, they became synonymous with disreputable criminal elements.

In 2013, Dark Horse Comics gave a green light to Eisner nominee Alex de Campi to produce an eight-issue limited series called Grindhouse: Doors Open at Midnight. The run would be four two-part stories that attempted to capture between the covers of a comic the experience of attending a Grindhouse movie theater. The four story titles were Bee Vixens from Mars (similar to Invasion of the Bee Girls, a sexploitation classic), Prison Ship Anteres, Bride of Blood and Flesh Feast of the Devil Doll.

The Crapbox is proud to unveil the first story arc as an act in two parts, today and tomorrow. Proud, that is, because the book does a great job of being trashy cinema. All the hallmarks of good Grindhouse are represented: throwaway characters, gross-out moments, unconventional heroes, horrifying villains and just enough weird sex to make you feel uncomfortable.

So sit back, mind your shoes as the floor can get sticky, and munch on that tub of popcorn as we present part one… 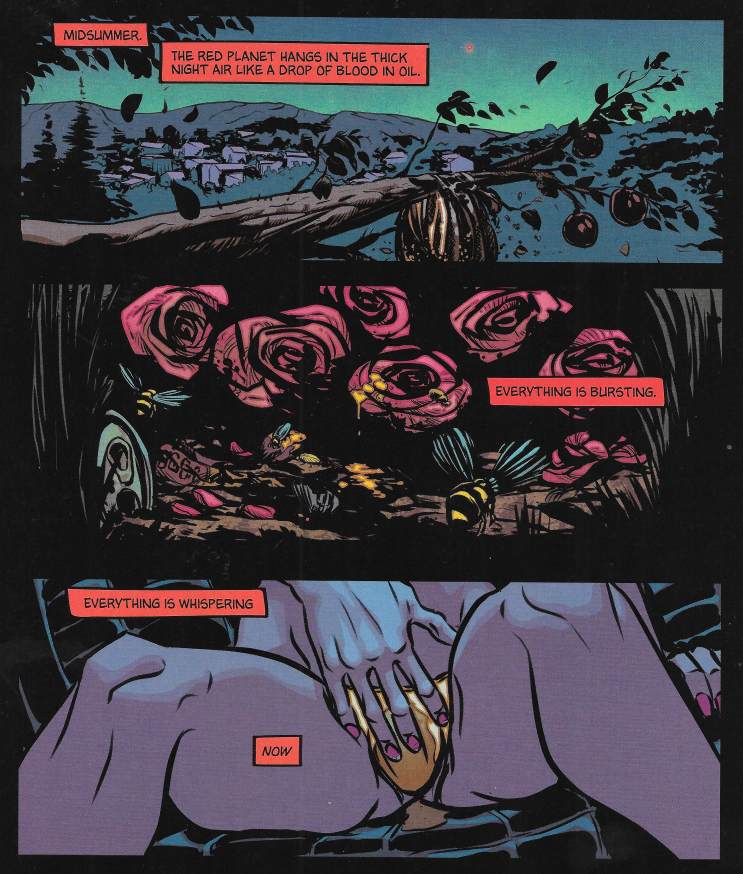 We begin with a sleepy little burg in midsummer, with Mars high in the night sky, the bees busily at work and the hot humid stink of honey, blood and sex filling the night air. 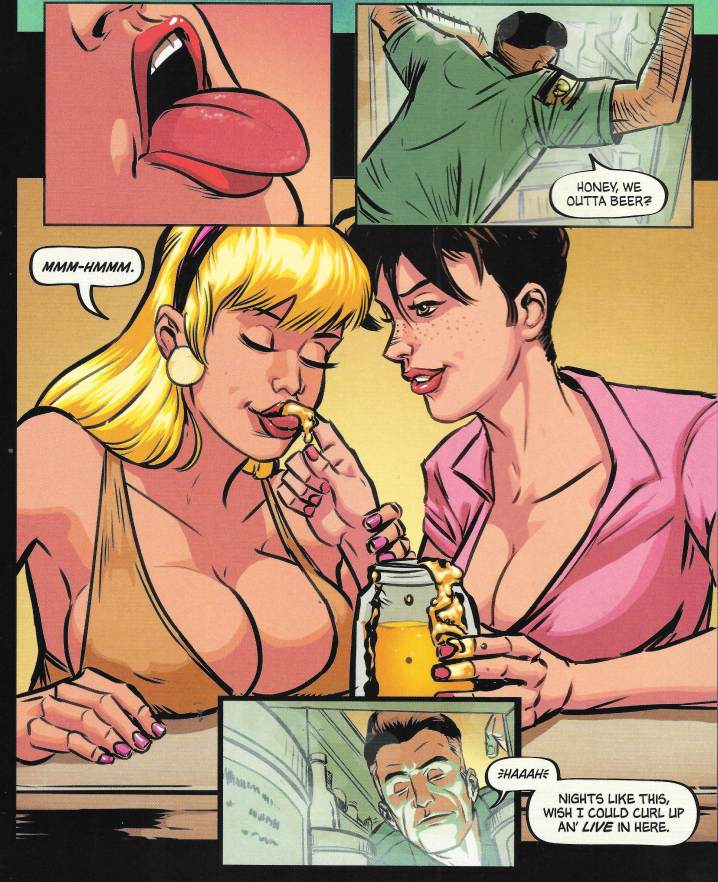 And while Officer Jimmy finds comfort in the cool blast of his open refrigerator, his girlfriend Betty is seeking a different kind of comfort from their neighbor Arlene. 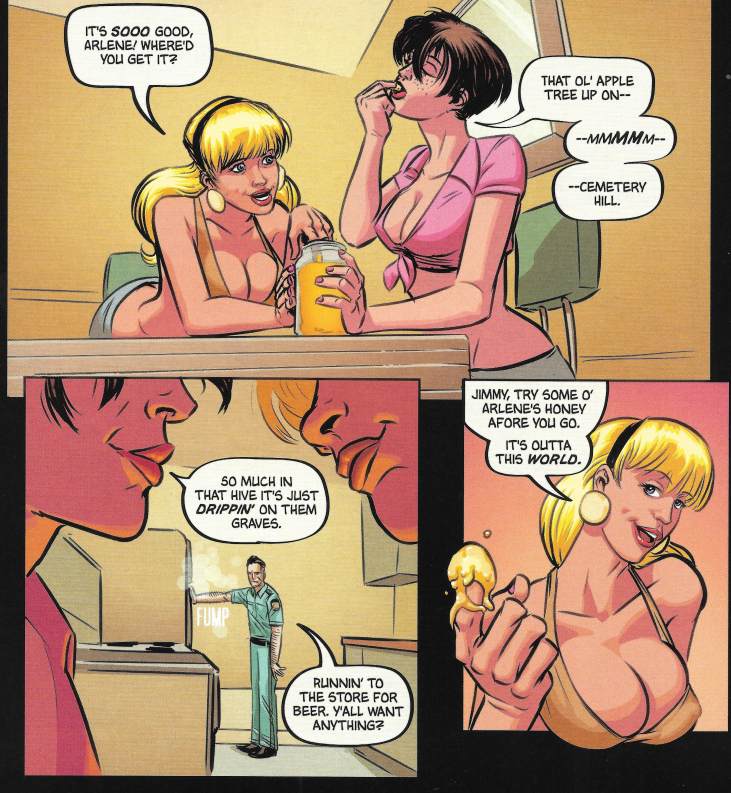 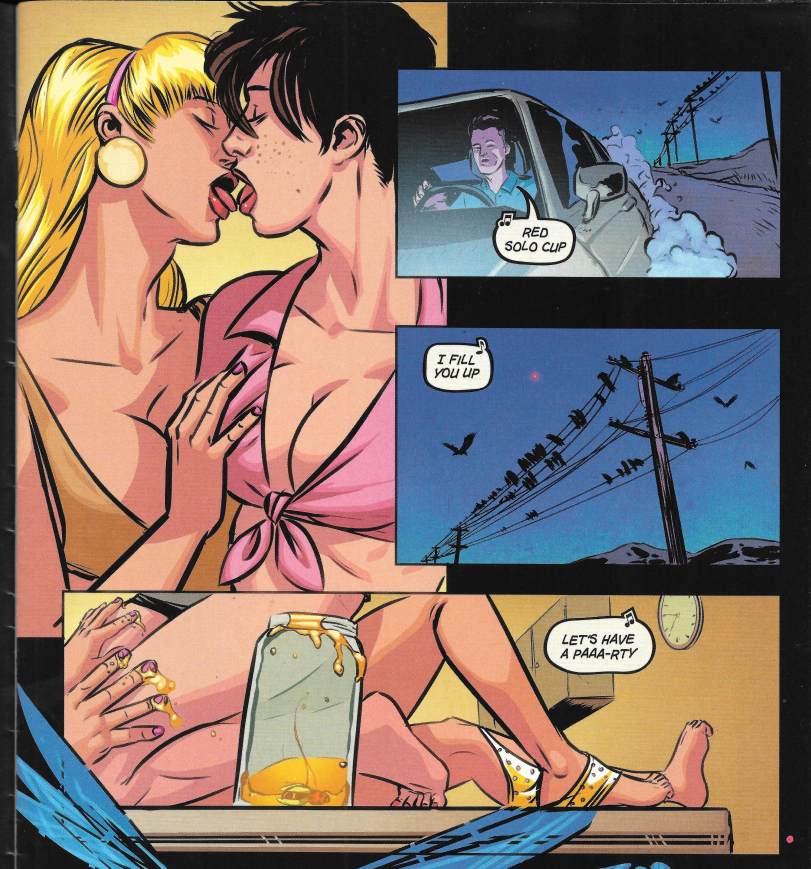 Jimmy is distracted by a bee that splats across his windshield leaving a dramatic smear of what looks like blood. And distraction leads to a crack-up against a telephone pole that means he’s gonna need a new tire. 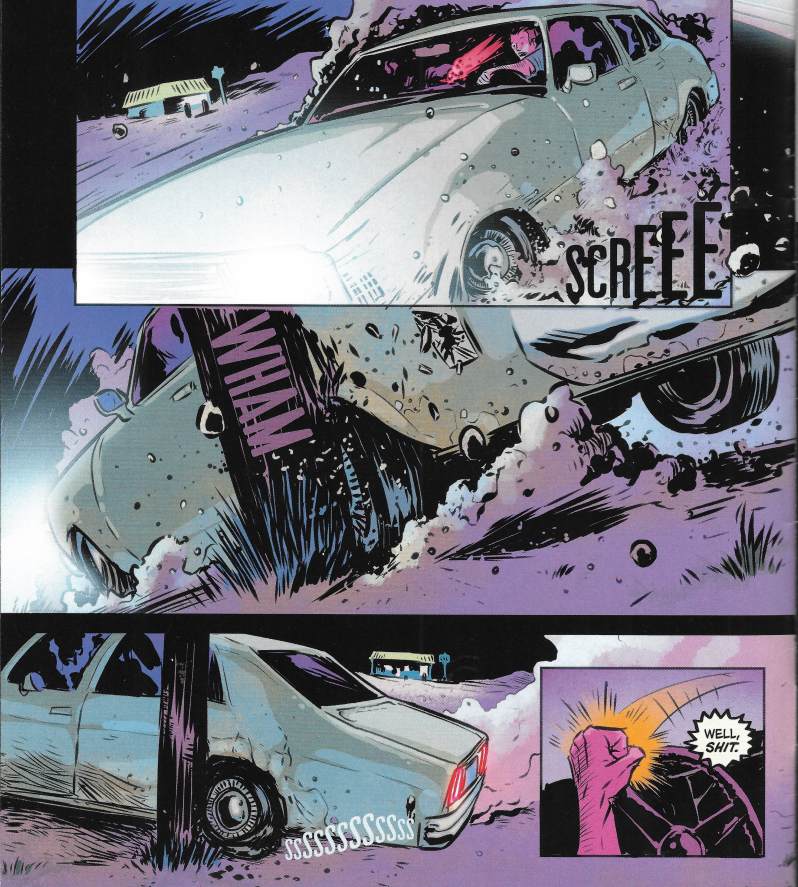 Lucky for him, he’s within walking distance of the corner store. Unlucky for him, Officer Garcia has been looking for him. Seems she’s found some trouble up on Cemetery Hill. 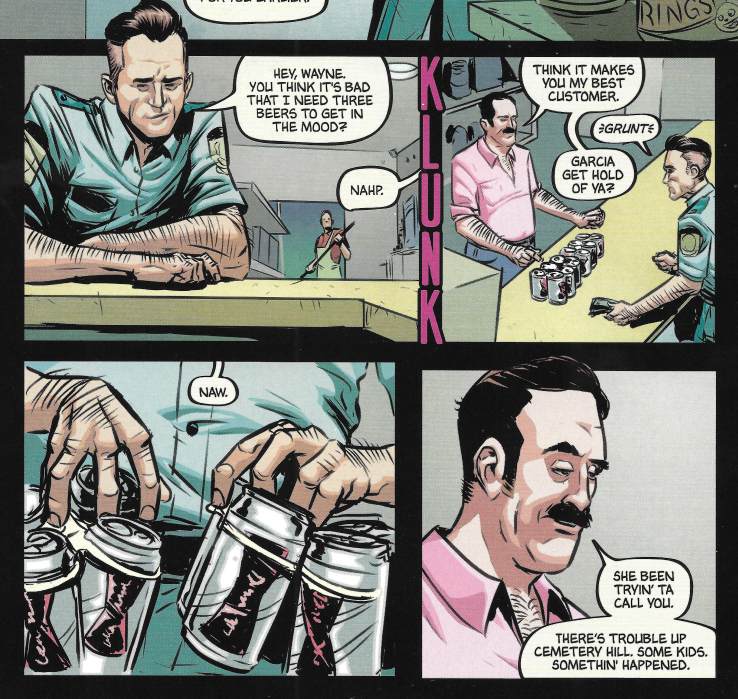 Jimmy grabs a can of Fix-A-Flat and heads out to see what Garcia wants. 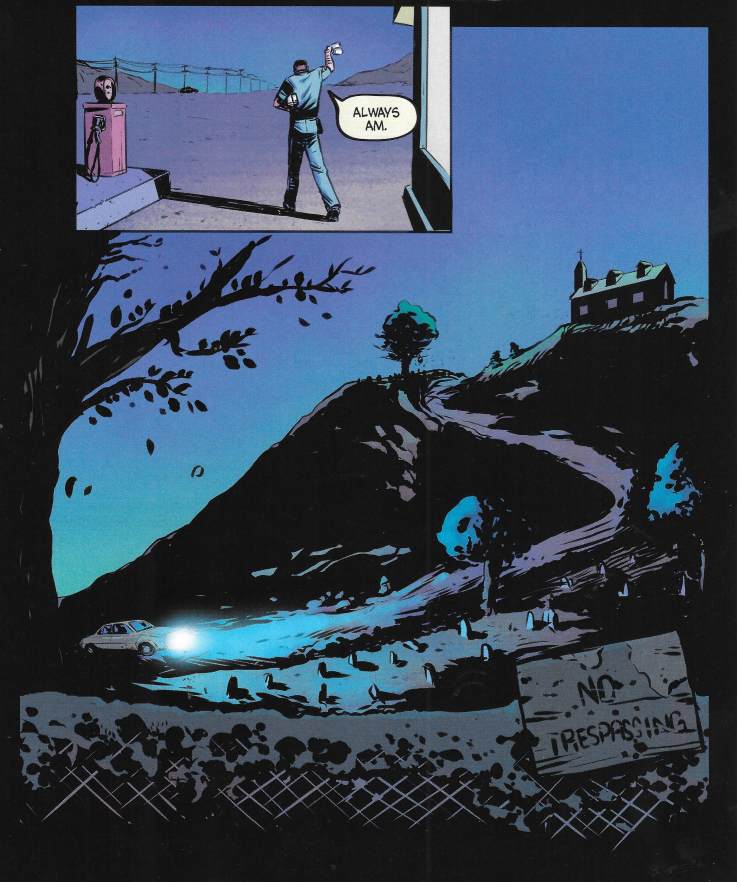 Speaking of Garcia, she’s this one-eyed, cigar-chomping, motorcycle-riding bad ass so common in the Grindhouse movies. She’s found a boy’s body all ‘sploded in the front seat of his car. He’s possibly the same kid copping a feel from page one. 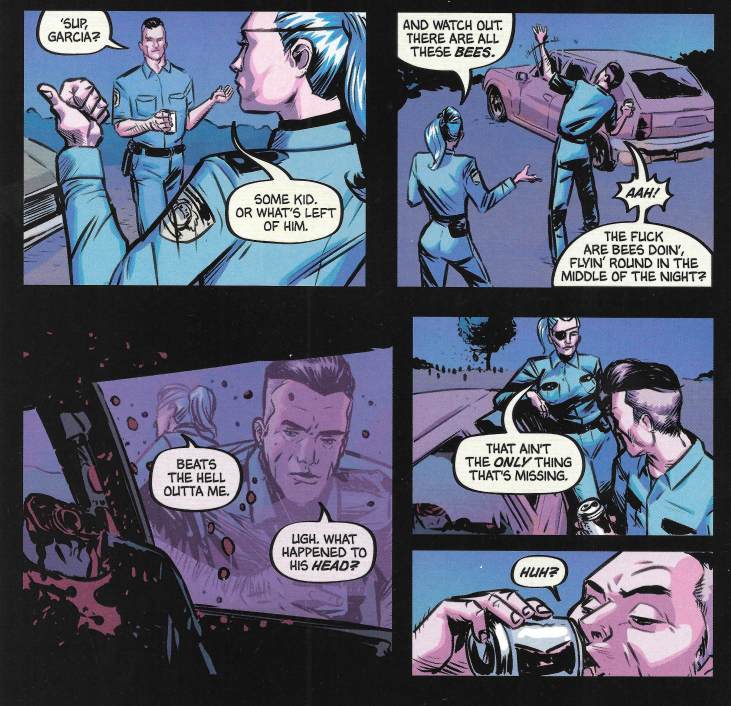 Not the kind of date I want to go on, by the way. 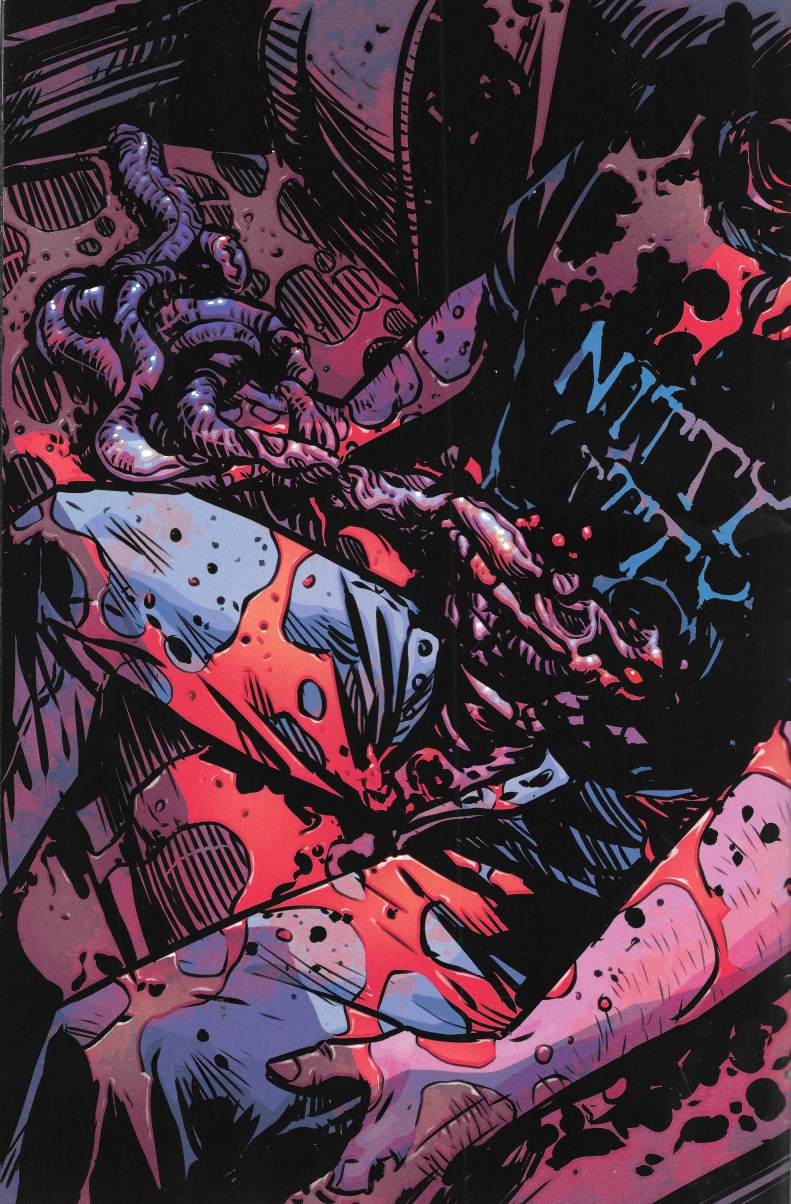 Jimmy ID’s the body as Arlene’s kid, a fella he’s busted a bunch of times. Garcia points out the obvious. 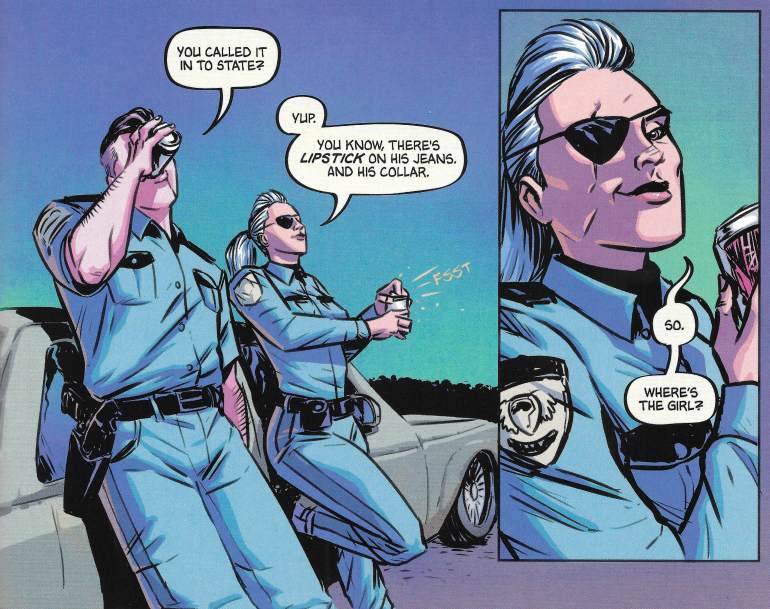 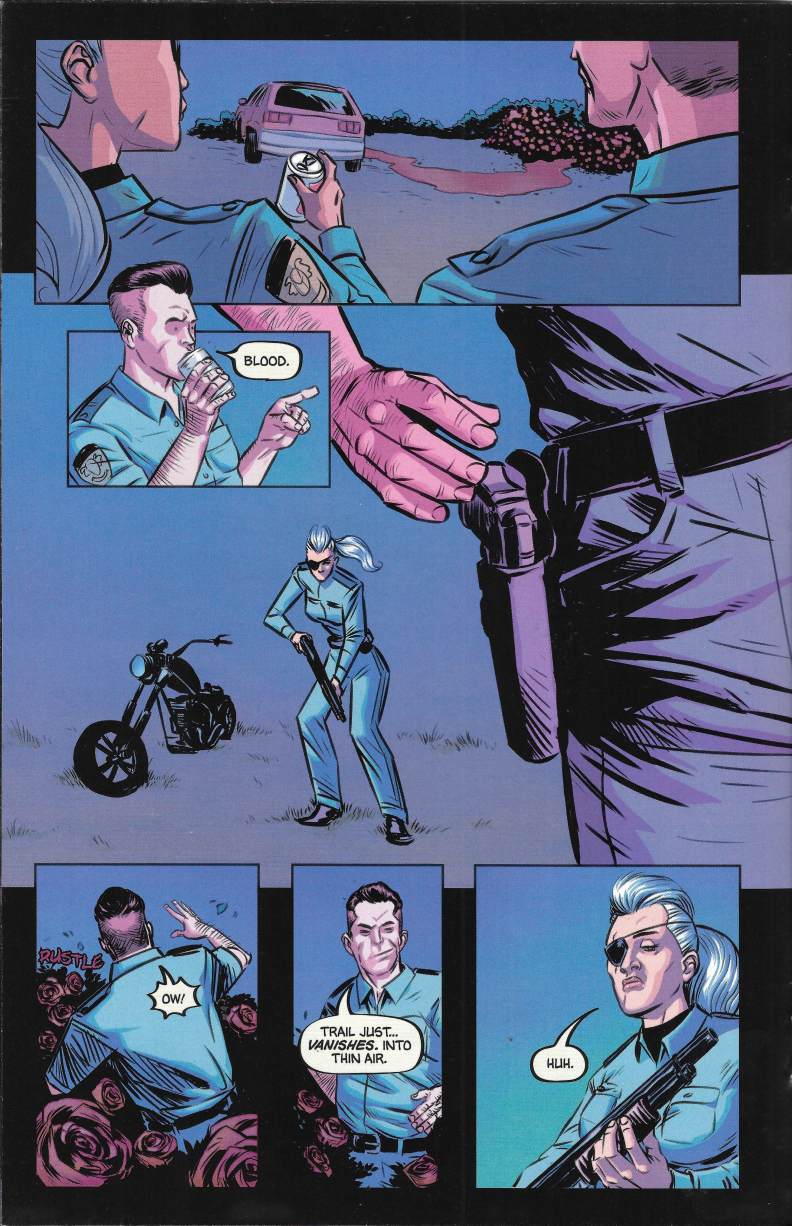 But this side trip through the roses won’t end up smelling so sweet. Something attacks Jimmy and it don’t seem remotely like any type of man or beast they’ve seen before. 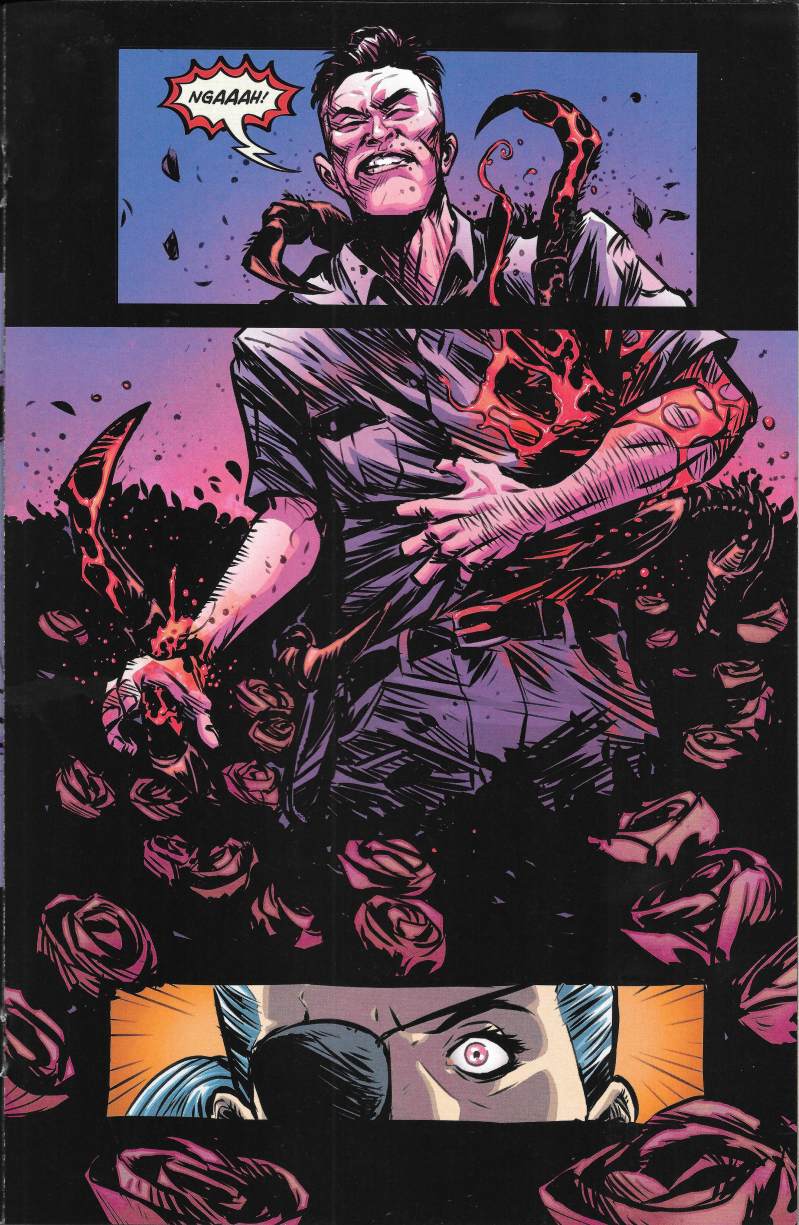 Garcia saves Jimmy’s hide with a few choice shots that scares off whatever got its pinchers into him. 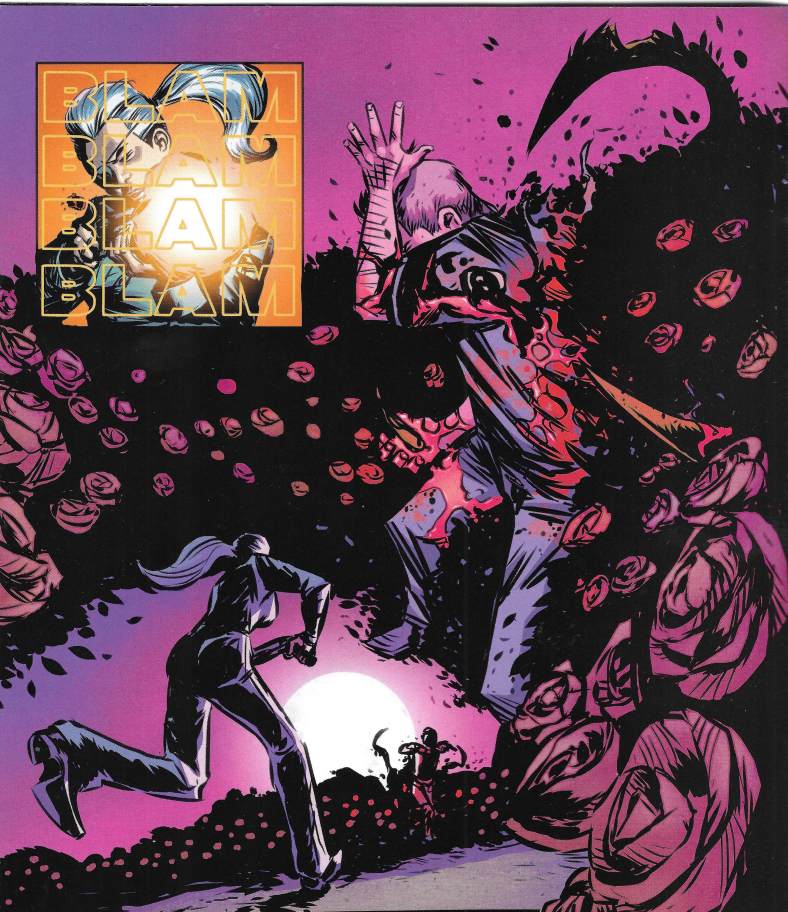 As she escorts Jimmy back to his car, she waxes poetic about his questioning what it was that attacked him. 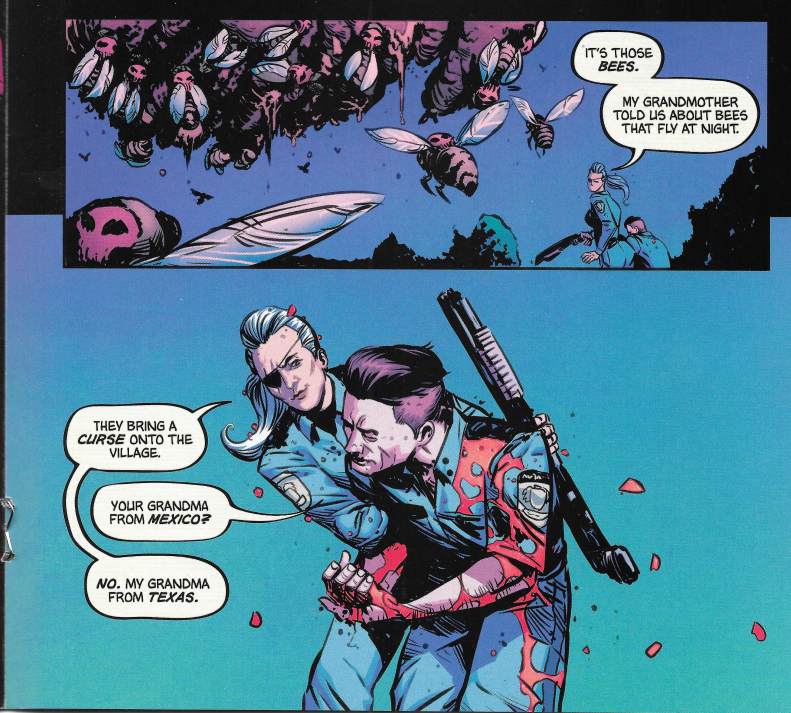 They share a moment of conversation while Jimmy wraps up his wounds. Garcia dedicates herself to eradiating the hive and then Jimmy heads home. 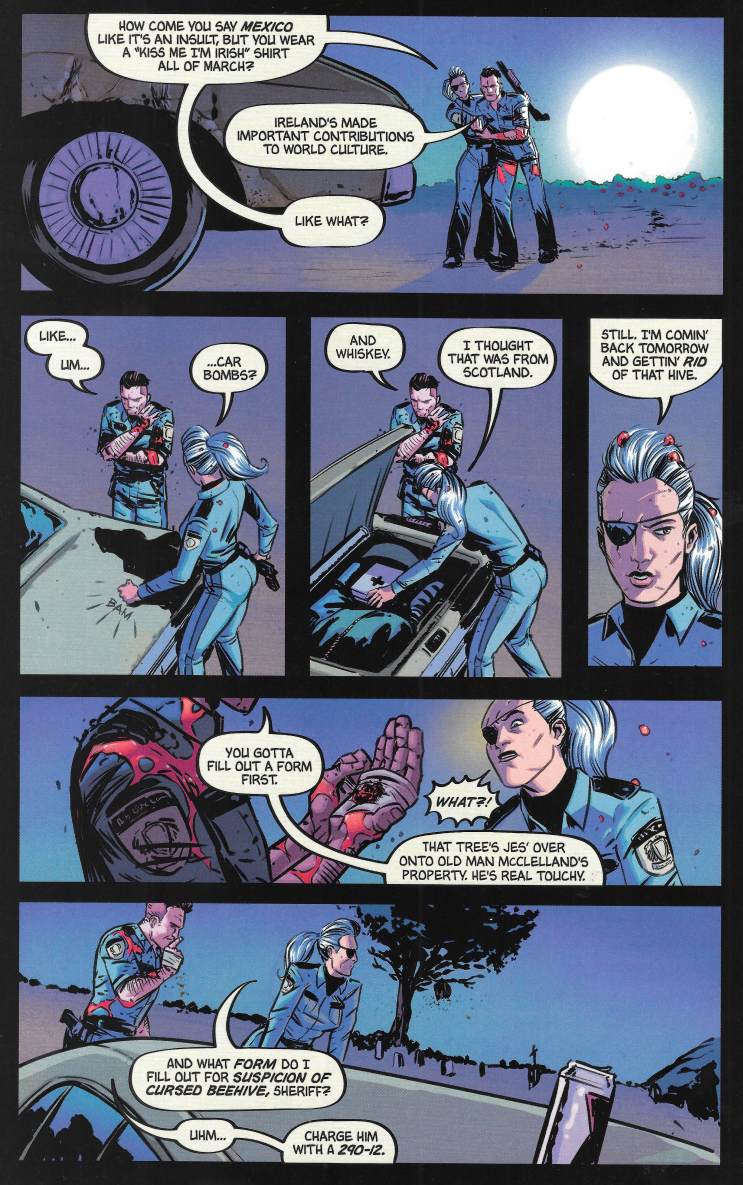 Betty and Arlene are nowhere to be found, so Jimmy settles for bed and beer, failing to see the bees around his house have other things in mind for him. 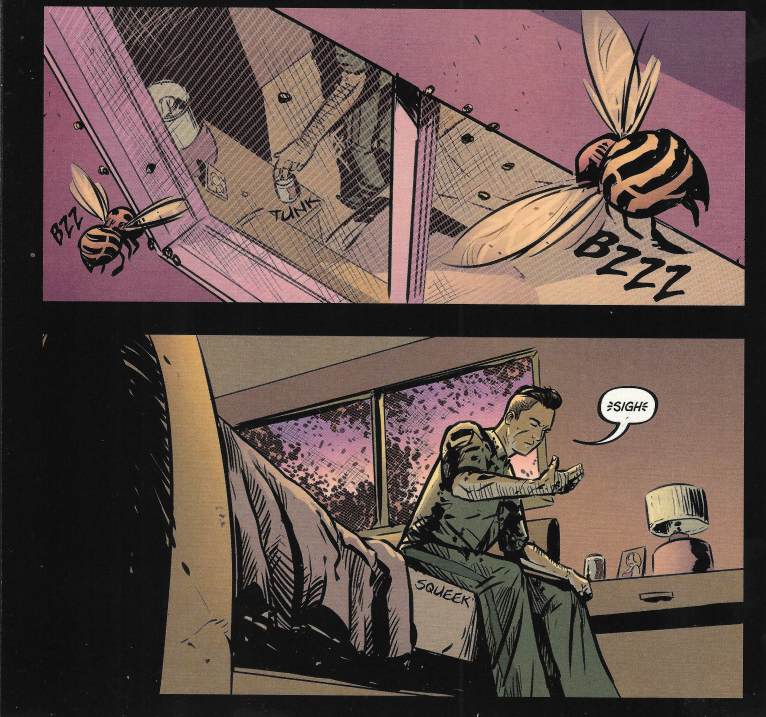 And as he is attacked by the swarm, we fade out to the next morning. 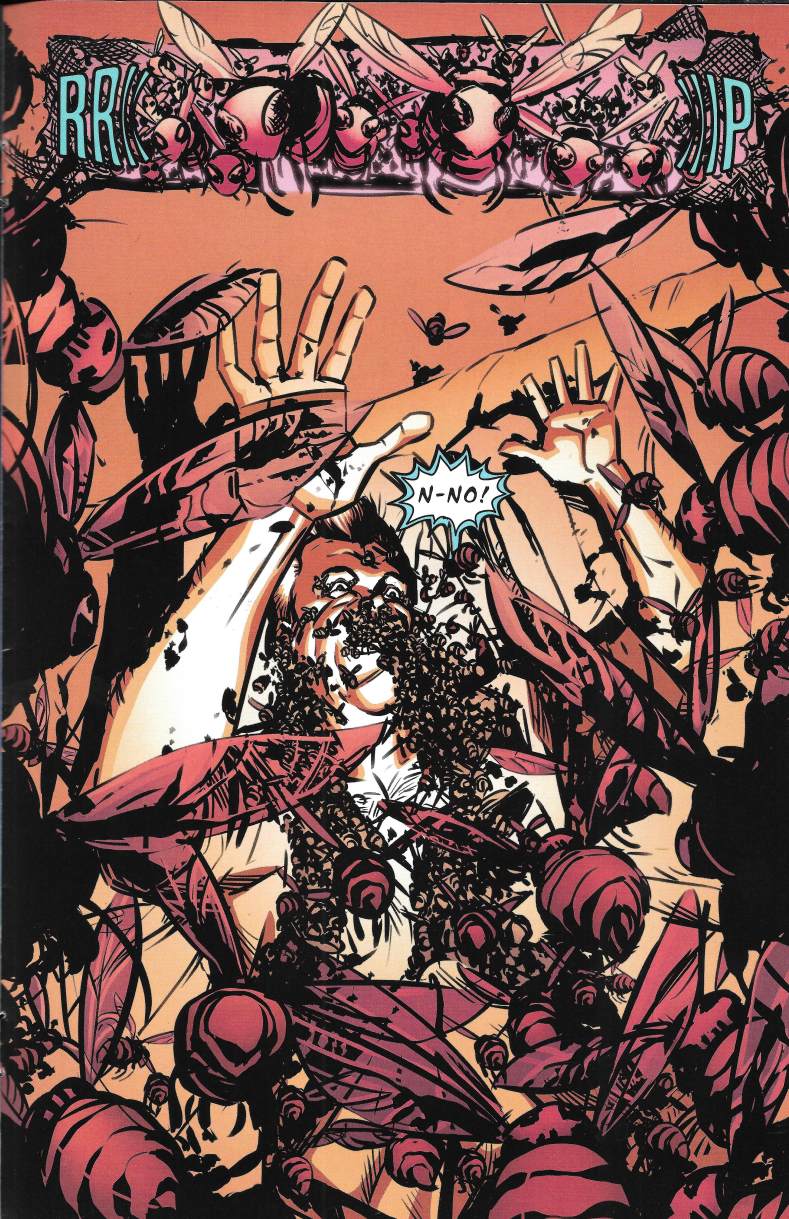 Garcia comes upon Betty and Arlene, who seems none the worse for losing a son. Maybe she doesn’t know yet, although all this talk of honey… 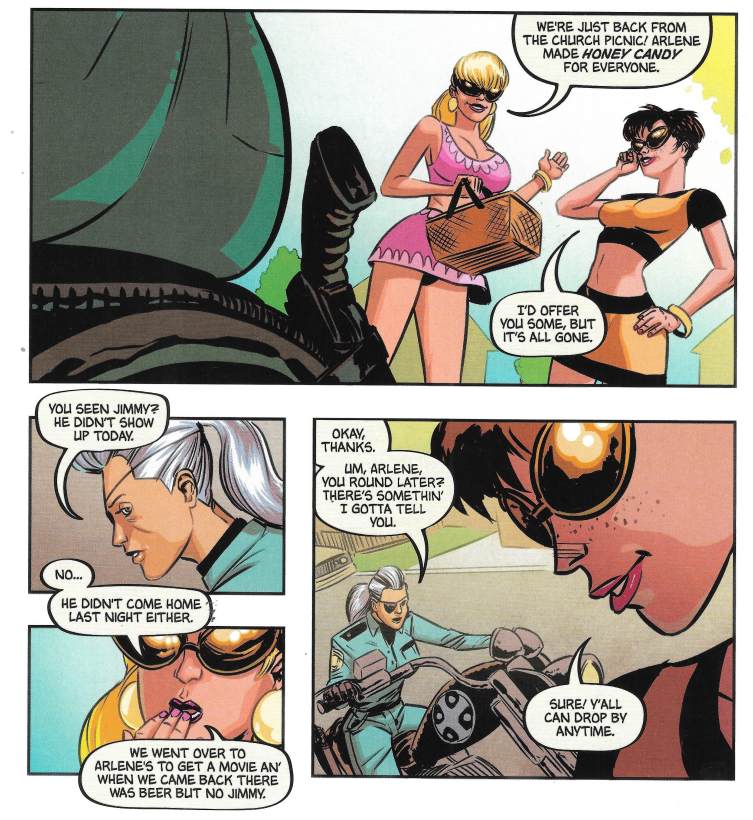 Garcia decides to ignore protocol and burn the hive without authorization. And when someone like Garcia sets her mind to a thing… 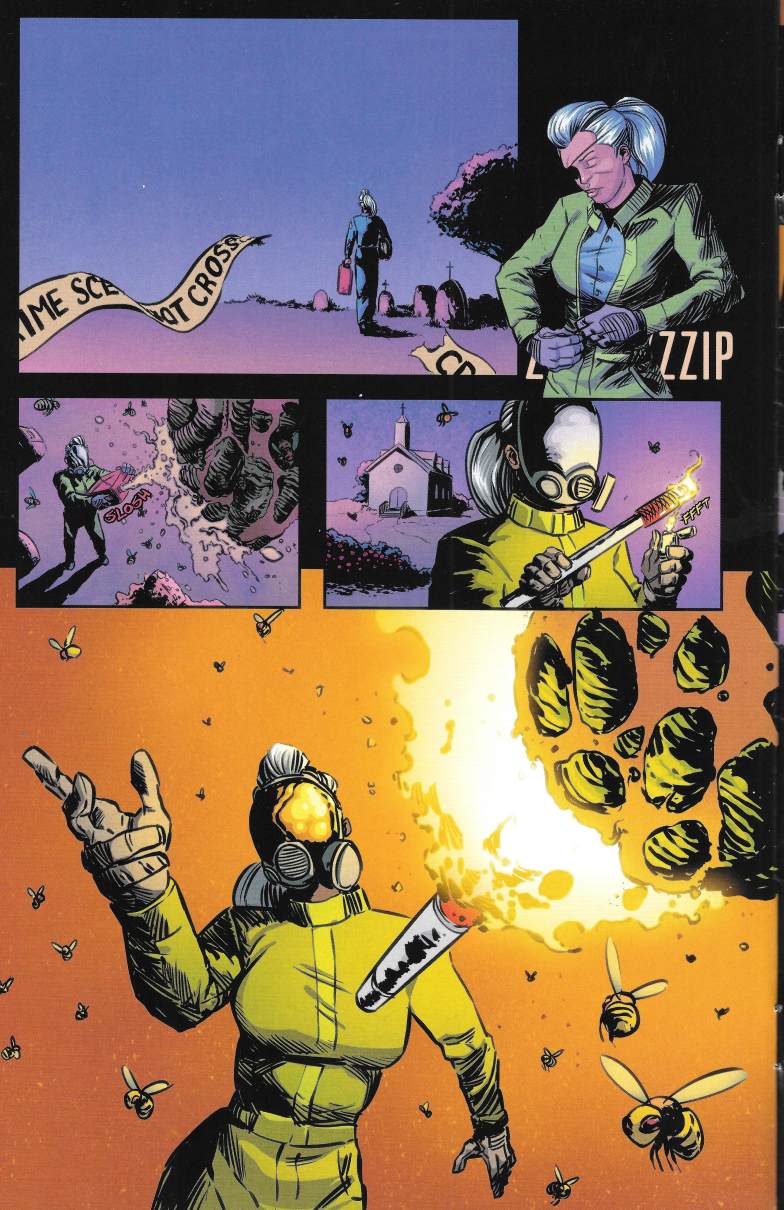 …that thing gets done… 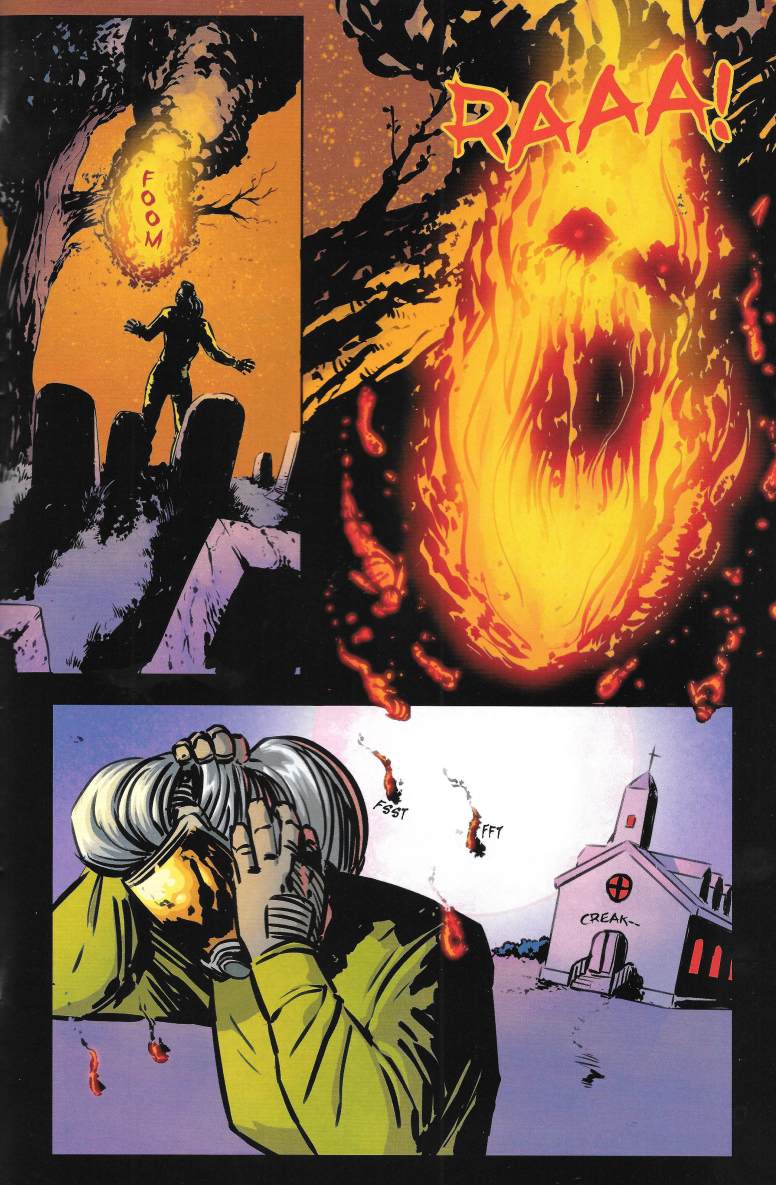 …but it appears that not everyone appreciates her clearing off those bees. Specifically the women who’ve sampled Betty and Arlene’s candy…and mutated into killer bee vixens. 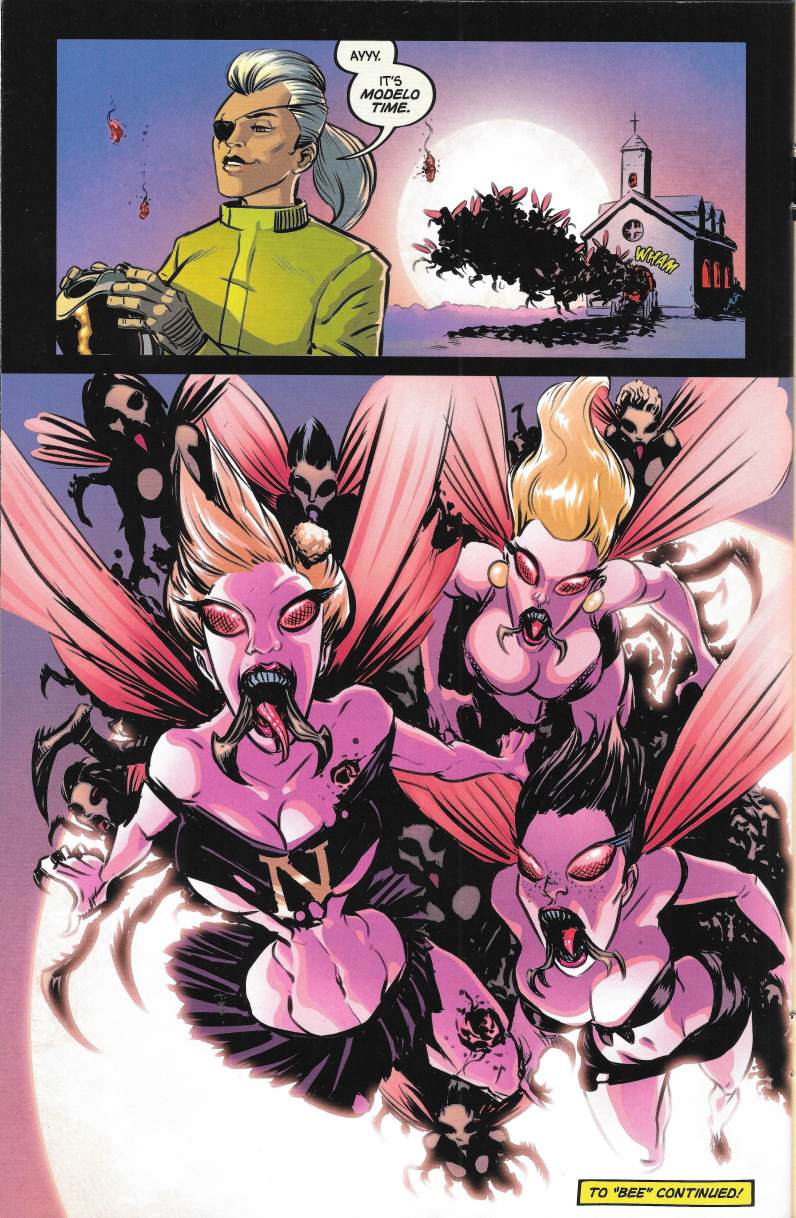 Stay tuned after our intermission for part two of this epic Grindhouse tale tomorrow!
Posted by SonOfCthulhu at 2:26 AM