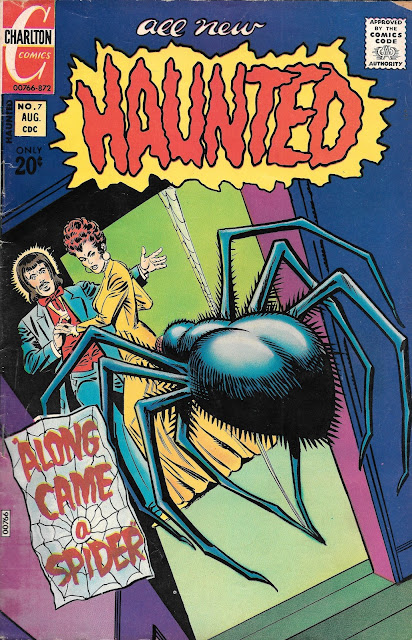 Aside from some way out Ditko, not much here to excite you

The Haunted title ran from 1971 through 1984, surviving for 75 issues even through the slump of the horror comics genre in the early 1980’s. It made it right up until the Charlton Publishing company’s money ran out and their presses fell apart. Most of this book’s contents were reprints, and if this issue is any indication, they weren’t top of the line stories.

Going in I’m going to throw out best info I could find on these tales. Charlton and older DC books were not known to be the best at giving writers or artists credit on their work.

Let’s dive in, shall we? 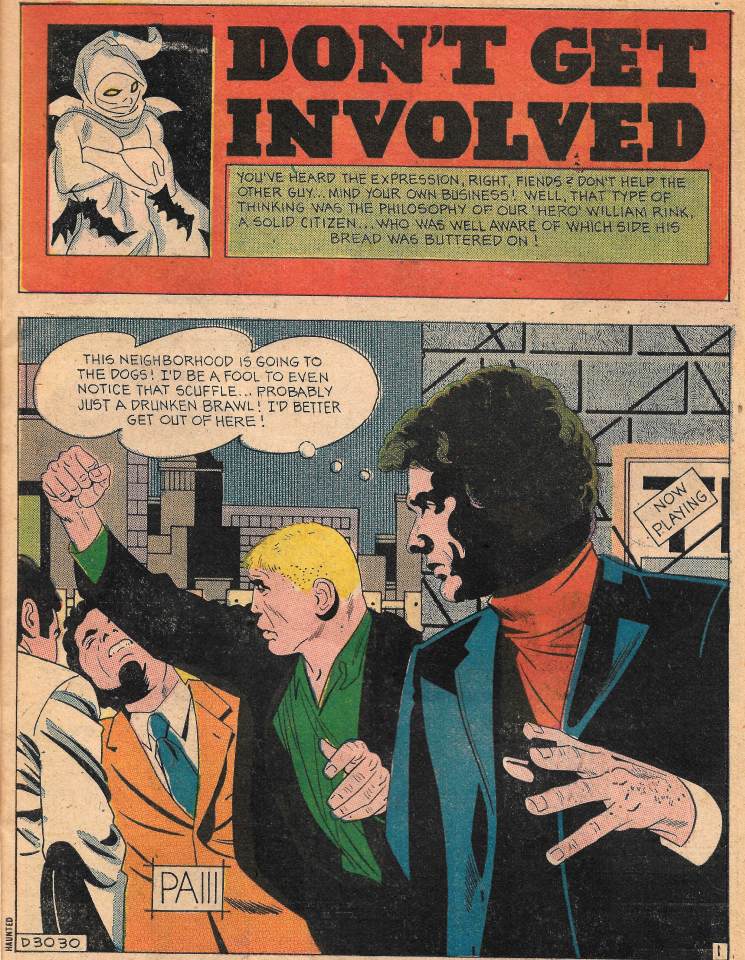 We begin with a tale of Deserved retribution. The sin is given away on the splash page, that being the breaking of the Golden Rule by turning your back on a fellow person in trouble.

Note the white ghost at the top. That is you guide through these tales, a fella by the name of “Impy.” Impy lasted as host until issue 20, after which the duties of guide passed to Baron Weirwulf. Weirwulf had just vacated Charlton’s Ghost Manor. The title was also changed then to Baron Weirwulf’s Haunted Library, which makes a bit of sense as the only ghost to do any haunting in these four tales is Impy.

Now to start our actual story off! Meet William Rink, an all around shitty person. He starts up our tale with this cowardly act of failing to render aid…

…and quickly follows it by being a snitchy little tattle-tail at work. Writer Gill (if this really is him) wastes no time in getting us to hate Rink, which is good in a short story form where it is better to evoke emotions quickly so you can move on to playing upon them. 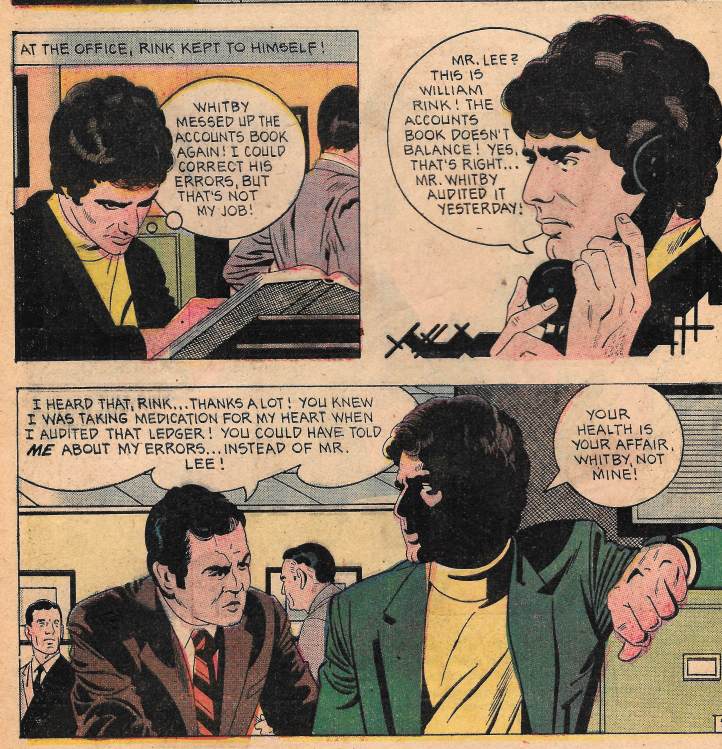 Just to make sure he’s put that last straw on the camel, we get one final dickish act by Rink before we begin his comeuppance. 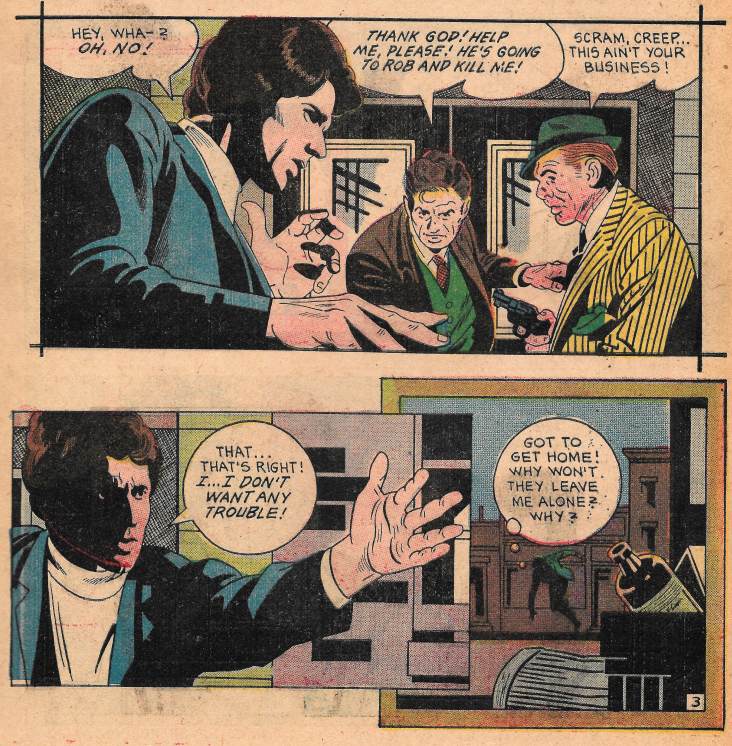 Rink leaves the guy to his fate and heads home, where gets into his yellow jammies and he smokes a cigarette (how odd that is to see in a book). I can see why he doesn’t have a woman. Just look at those PJ’s. 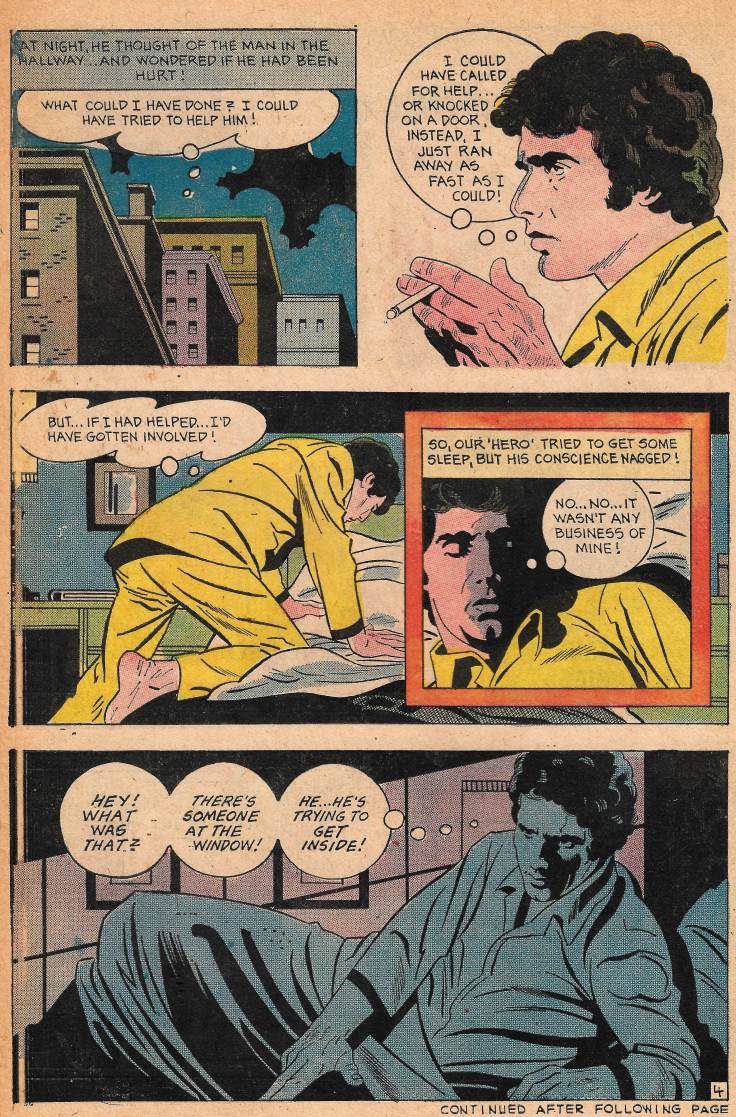 As Rink closes his eyes, he hears a sound like someone trying to get in his window. Terrified, he tries to phone the cops, but…

…his phone line doesn’t work, because Rink is too scared to remember how to DIAL 911. So he seeks help from a neighbor… 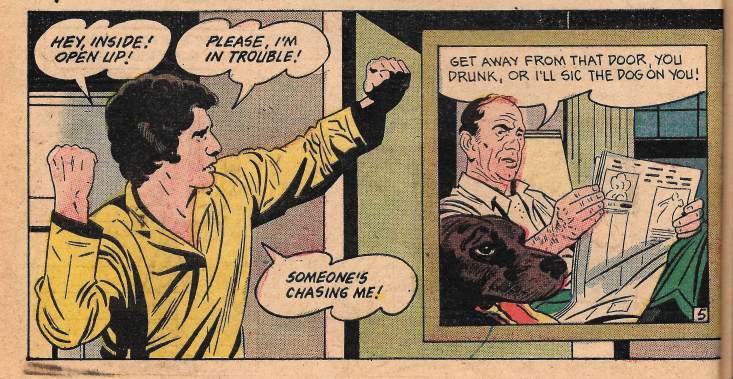 …which gets the typical response in the big city. The lesson here is that had Rink made friends with anyone or worn a non-threatening color of pajamas he might have been able to call on these friends in his time of need. Being a reclusive shut-in is no way to live your life. (Point taken. Make a note: I should probably talk to the next door neighbors instead of just grunting at them when we leave for work in the morning).

That leaves Rink running through the streets like a madman, with some invisible person supposedly stalking him. He encounters a man and begs his help only to be rebuffed…just like he rejected the man’s plea for assistance earlier. 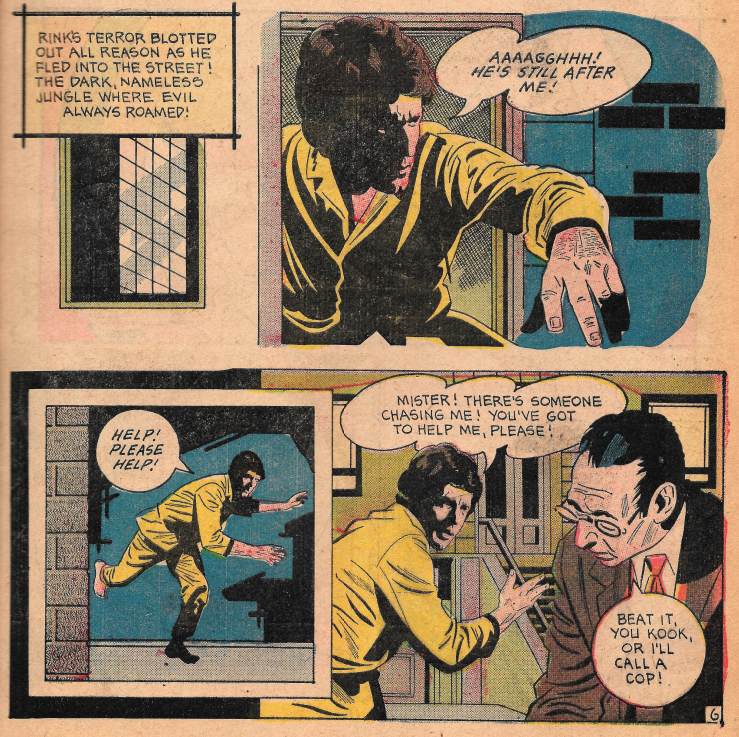 Finally, he darts out in front of a garbage truck not paying attention to where he is going and gets run over. I find it hard to believe the driver couldn’t see him in is yellow safety vest of a sleeping ensemble, but I’m not going to argue it. Unfortunately, Rink dies of this fatal mishap…sort of... 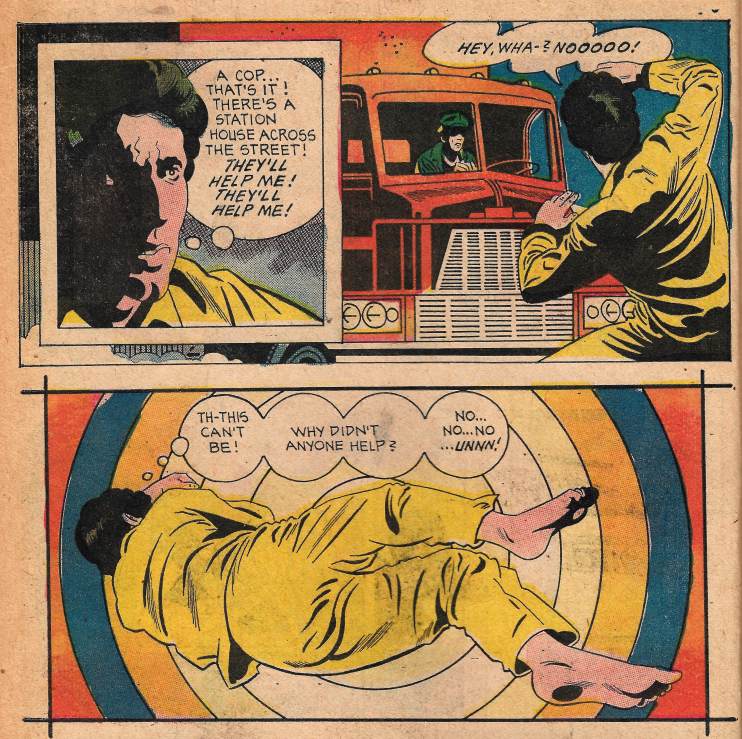 …because what really happened was he had a heart attack while in the throes of a dream, a nightmare where all this was happening. 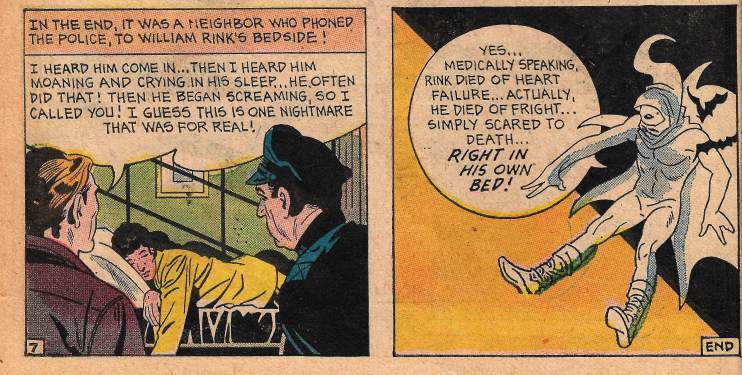 Eh? It’s okay I suppose. The ending twist was passing, however something about the Rink character doesn’t work for me. I like my characters to exhibit at least a tiny bit of remorse somewhere, so I can root for them to rehabilitate themselves before it is too late. Instead we get an amoral self-centered monster. Nothing much there to root for.

This short, one-page “story” is at least over quickly. 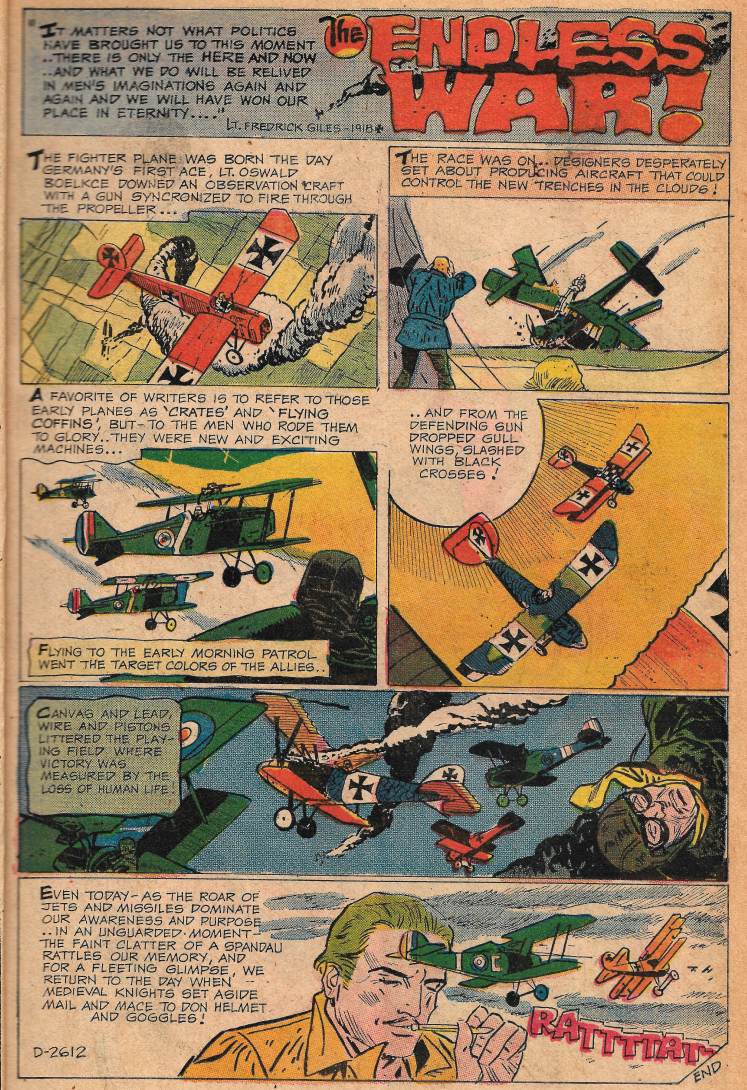 Ant that’s it. Uh…how is this scary again? I feel like this was a fill in piece from a war comic that never got published. War can be a great backdrop for horror tales and one-page stories do have merit if they are put together well.

This fails on both counts, being neither relevant nor anything other than a rumination of what air combat was like in WWI. Not sure why it is here...

Now this is more like it. Ditko cemented himself as the avant garde of the supernaturally strange with is trippy Doctor Strange comic books at Marvel, so I expect great things from this story.

Boy do I get them, too. The art is near perfect, elevating a tale with a foregone scare into something that has a few genuine chills in it, all to Ditko’s credit. We begin with this couple who are left stranded on a road in the middle of a horrendous, lightning lit night. When suddenly …there’s a light…over at the Frankenstein Place… 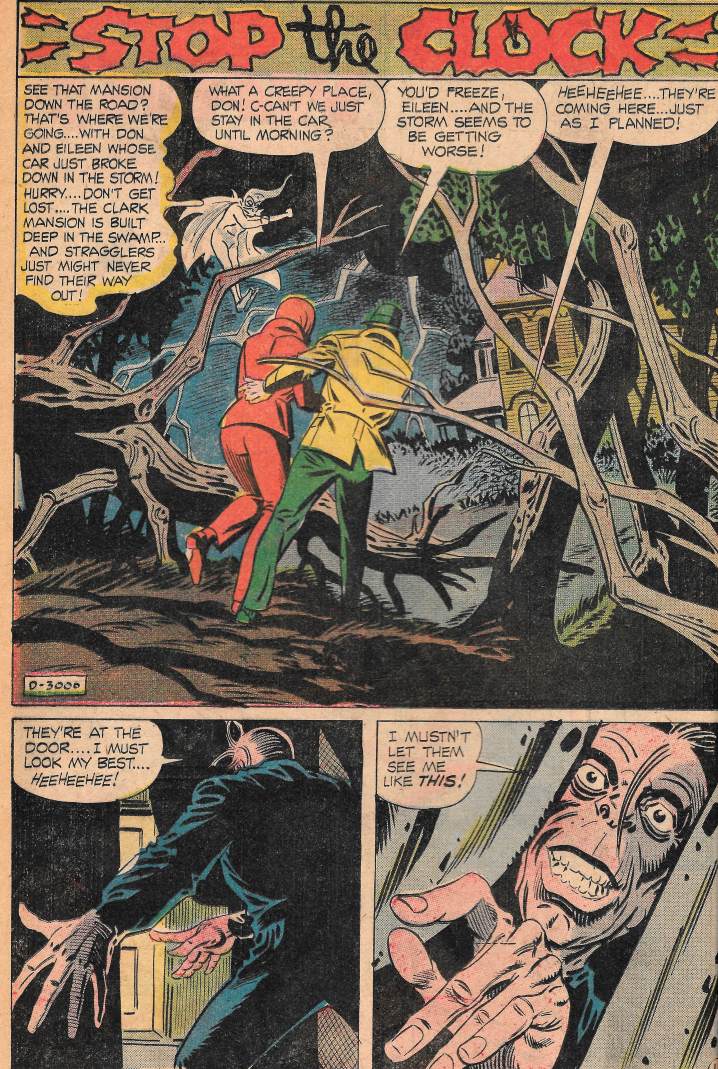 (sorry, that may have been Rocky Horror and not this comic.)

A house run by that gruesome fellow at the bottom, who is a bit overly concerned with his appearance. And perhaps the home of this ginger gent by the name of Howard Royal Clark as well… 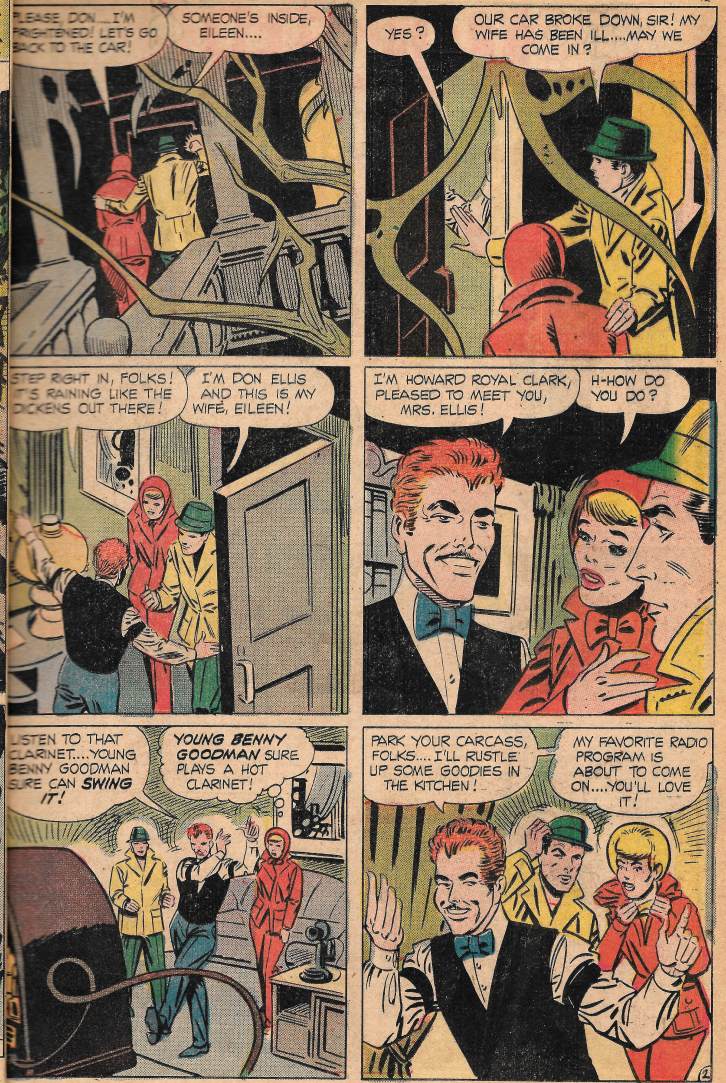 You can see the wispy like smoke effects in the way Ditko did the branches on that tree. And take a gander at the body language and facial characteristics that reveal this story is by Spider-Man’s creator.

Anyway, Howard seems the exact opposite the type of guy than the aged, balding weirdo that hovered so menacingly near the window in the bottom panels of that first scene. He’s jovial, handsome and full of life. So full of life he’s almost manic.

While he’s rustling goodies up in the kitchen, the couple notice some very odd things. The newspapers, magazines, and even the radio programs are over thirty-five years old. Not to mention that the fact that Howard’s picture is in one of those papers, and it doesn’t appear that he’s aged a single DAY! 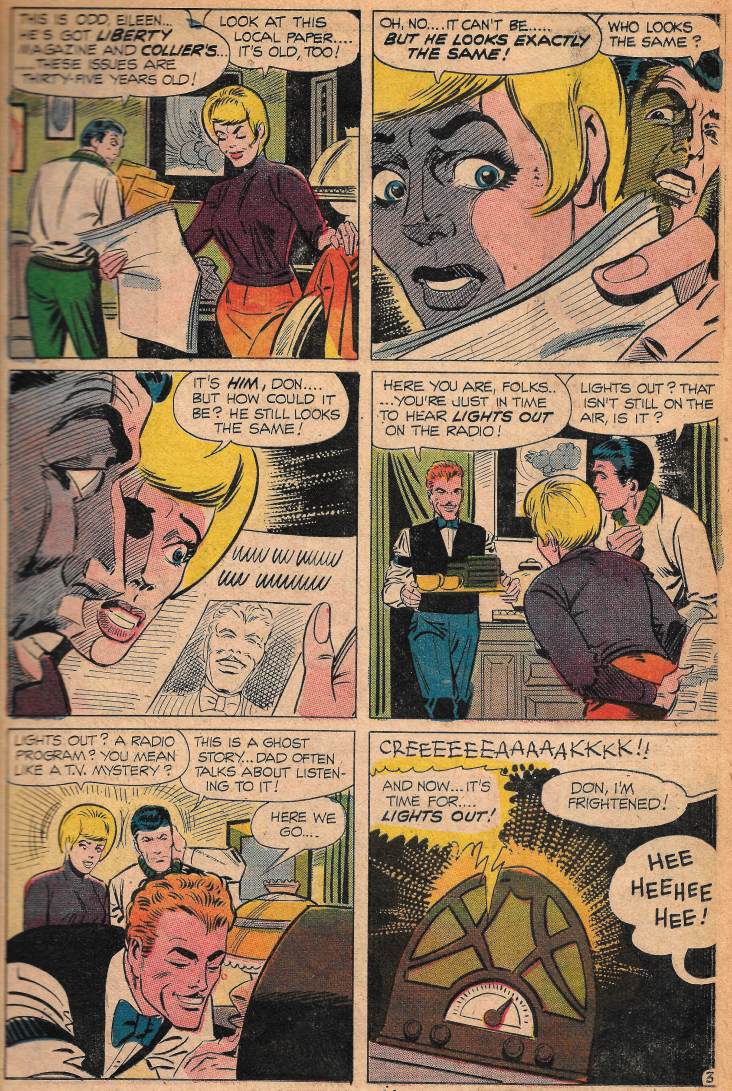 Worst of all, when his favorite scary radio show comes on, Howard trips the lights out. And suddenly a puzzle piece falls into place for us, the audience. 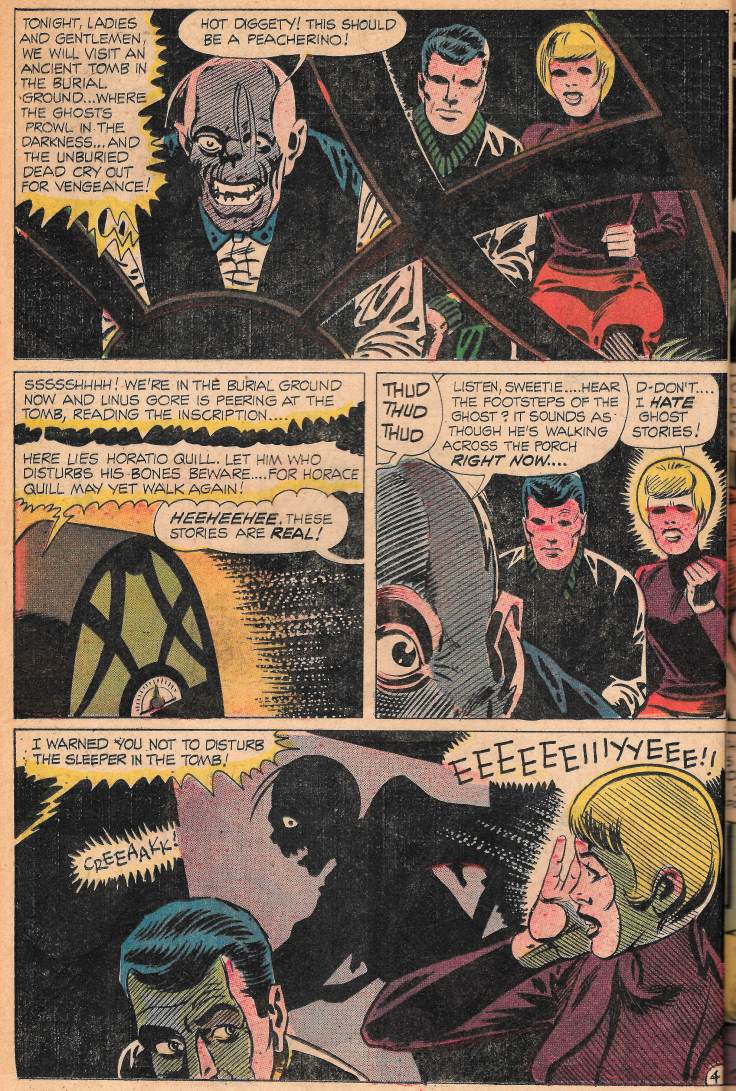 For in the dark, Howard looks like the weird creep-o from the window, suddenly aged past his normal years. The fact that our now frightened couple can’t see him, coupled with the fact that he appears to be saying the ghost stories on the radio are real-life tales, means they might be in grave danger!

Eileen is so freaked out that Don forces Howard/undead creep to turn the lights back on. It’s then that we learn the reason Howard has drawn the couple there. That dead fiancé looks VERY familiar. Don storms out of the room to get some answers… 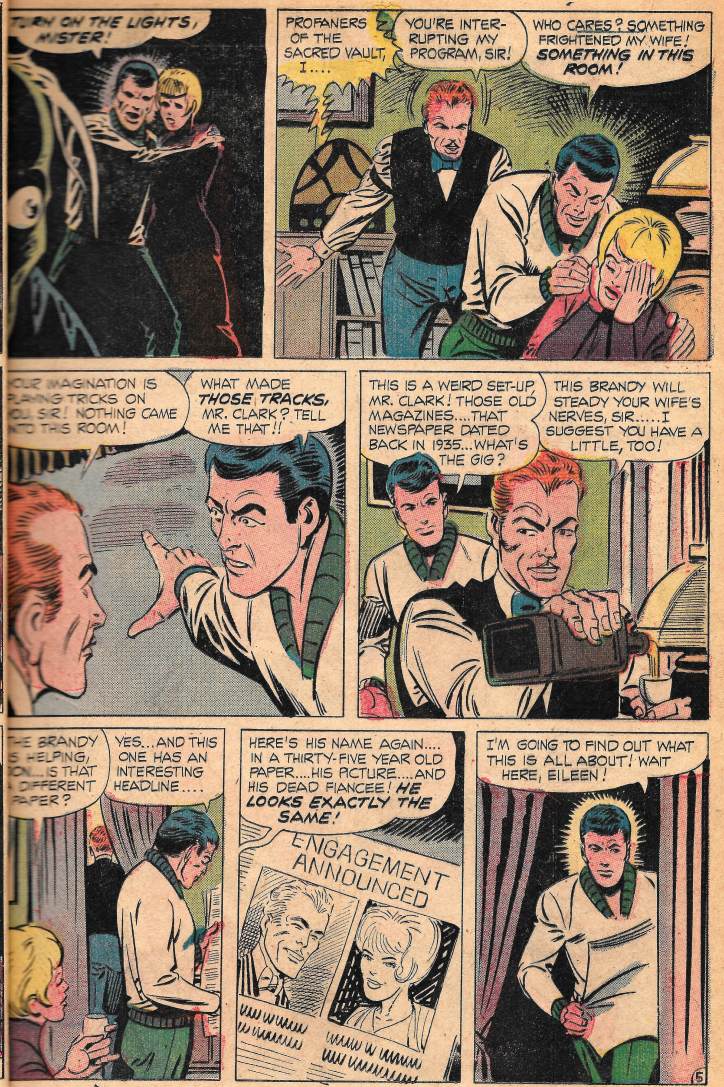 …only to come face-to-face with the ghoulish spirit. Moments later, Howard comes back into the room talking crazy talk, about how Eileen became engaged to him thirty-five years ago. In her frantic haste to get away from him… 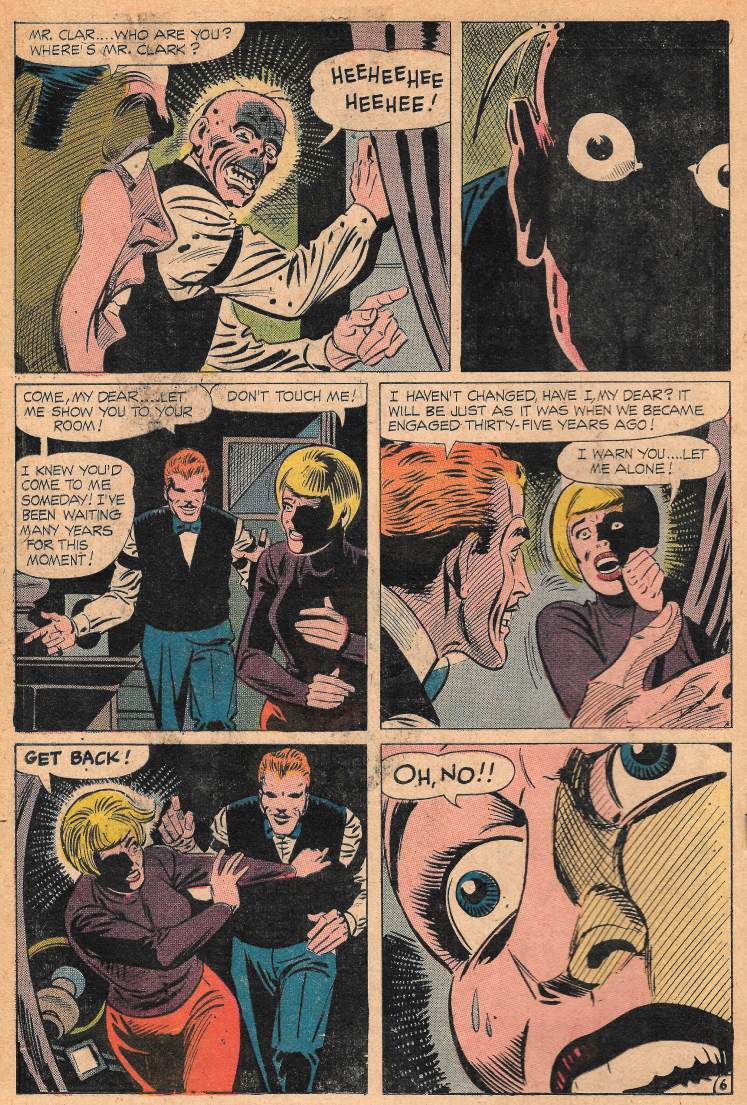 He reveals his true decrepit form… 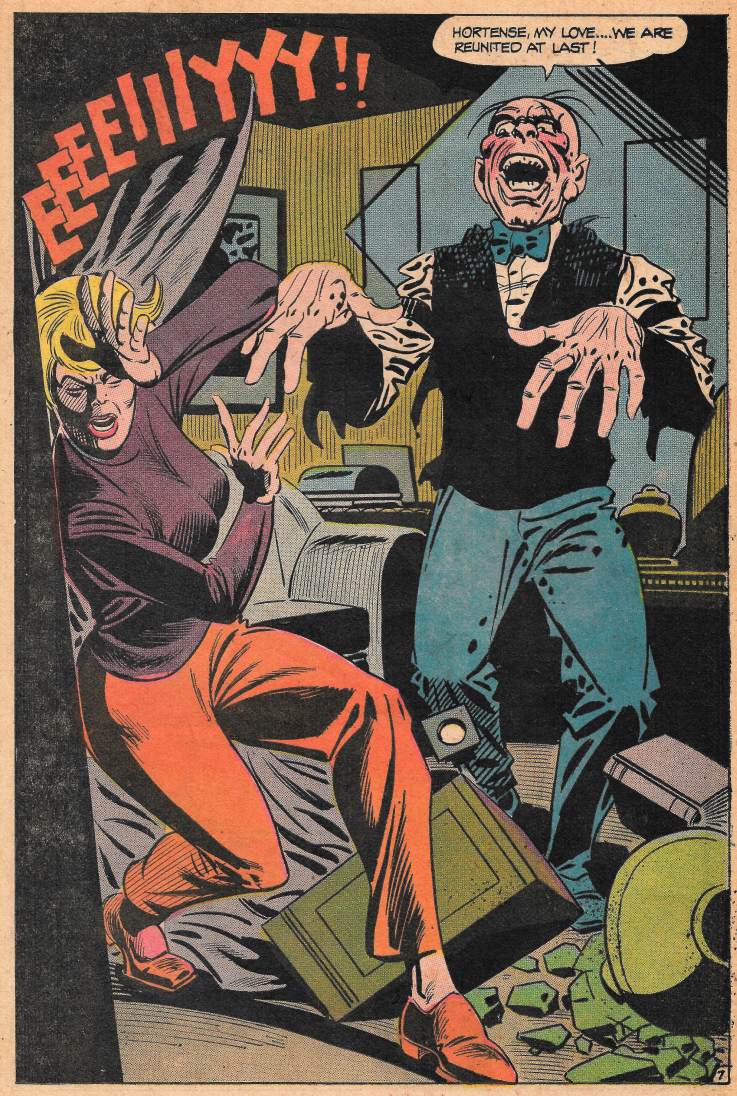 YIKES! Luckily Don is still a live and arrives to throw some light on the matter. And in the harsh light of truth the creep crumples to the floor. 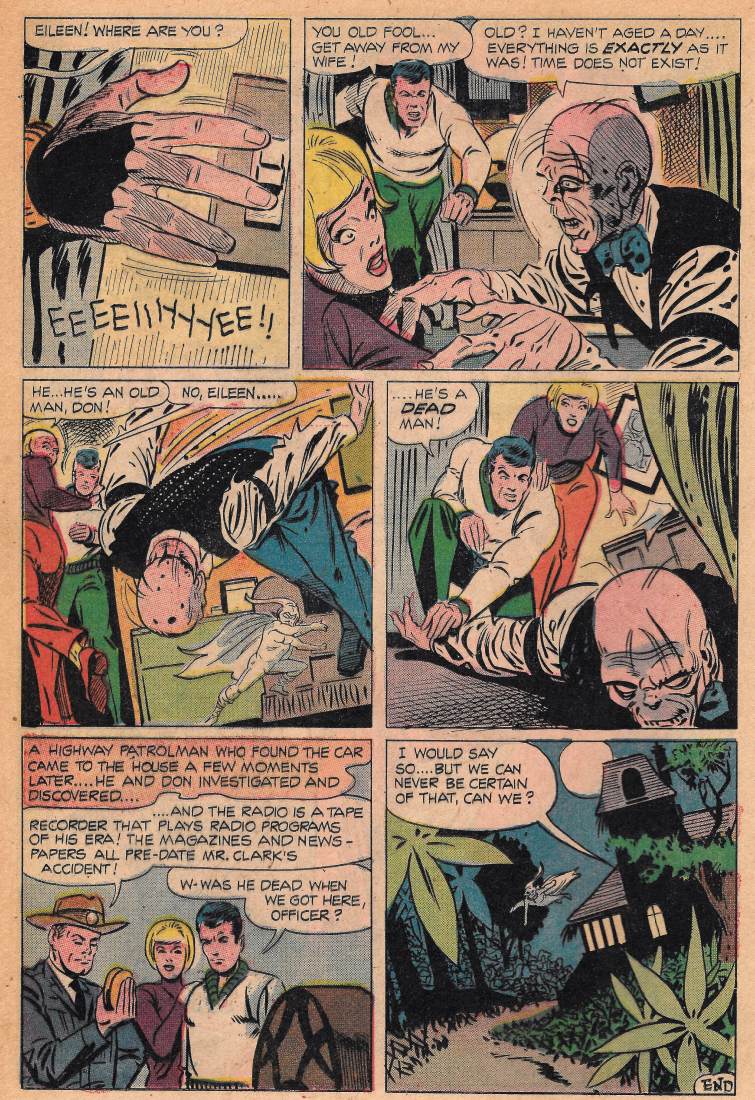 Appears he was dead before they arrived…which means the man they saw was a GHOST! (Maybe. We can’t be for certain.)

Okay, so first the bad: This story really doesn’t know what it is doing. The plot is all over the place and the characters actions and motivations don’t really jive. What redeems it, at least for me, are the Ditko visuals. The look and feel of classic Ditko is so refreshing in everything from the way he did faces to the angles and proportions of his character models makes me smile in spite of the dumb plotting errors. That splash page is amazing, as are the shots of Howard dancing and his ending swan dive.

So not a good story, but worth a read for the visuals. On to our last tale…

This is a second Ditko tale (huzzah!), but even though the sources I have state he is on inking chores, I think the embellishments were done by someone else. There are a lot of hallmark Ditko poses and edges that are smoothed over. It just doesn’t have the look of something he inked.

Sadly, for me that means the art comes off a bit bland. Gone are the exciting unique bits that make reading Ditko on Ditko such a treat. Let’s see if the story makes up for that. 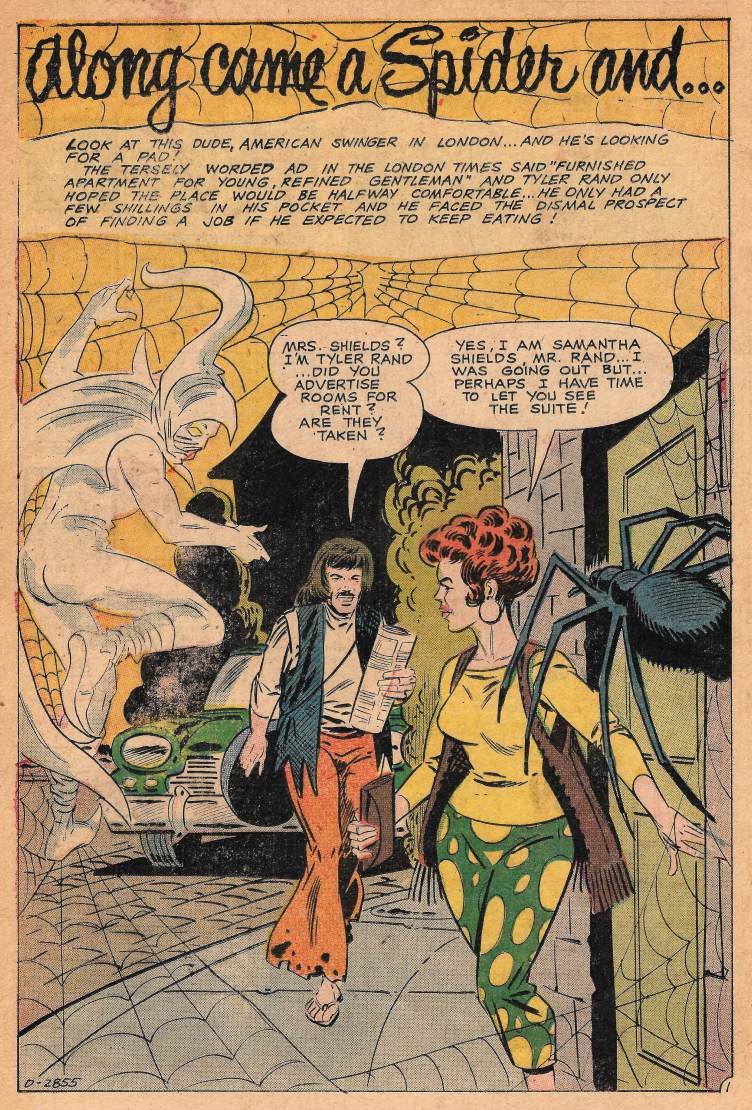 We begin with this bell-bottomed vagrant hippy named Tyler Rand who swings into Samantha Shields life looking for a place to crash…and someone to freeload off of. That line about getting a job…because jobs are such a drag, man.

So while the art doesn’t have that “fun” vibe of the last story, the dialect and voice of the characters works overtime to give the piece some weight. It looks like the hippy freeloader has secured himself a cool place to hang out and a landlady that won’t bring him down… 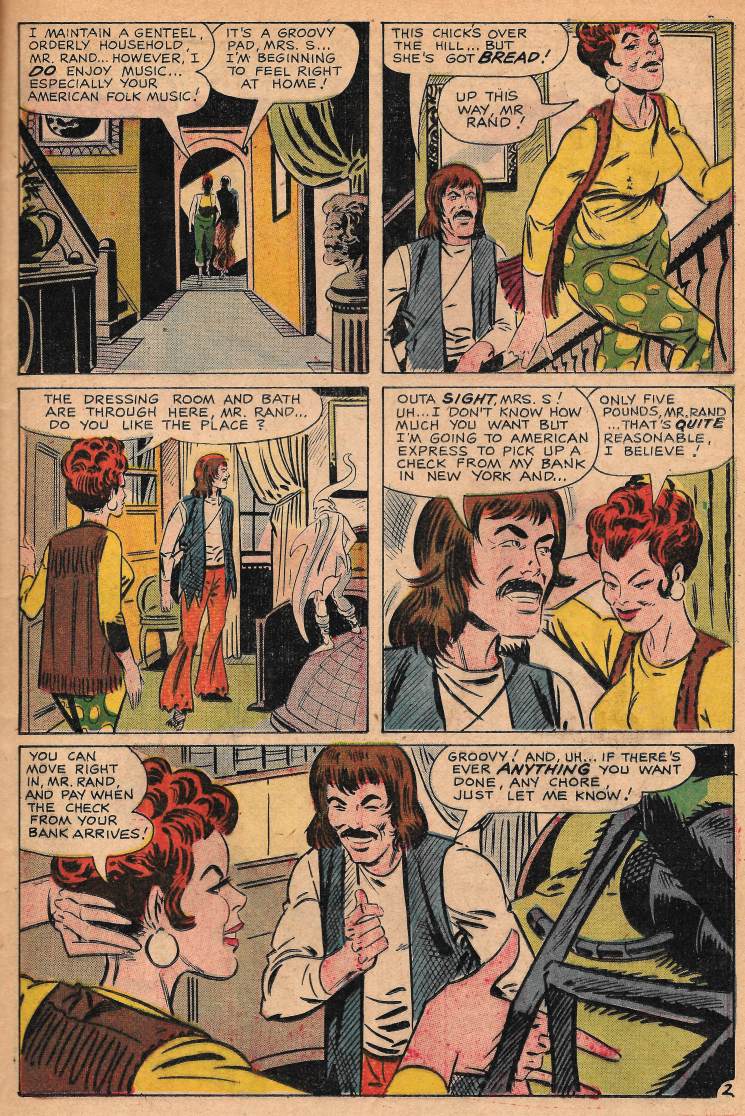 …what might not be too cool is her penchants for not getting rid of a arachnid that’s made a cozy home in the room’s corner though. Tyler thinks he’s got a shot with Ms. Shields, so he accepts his new roommate. On a temporary basis, that is. Seems he has plans for Ms. Shield’s “bread.” 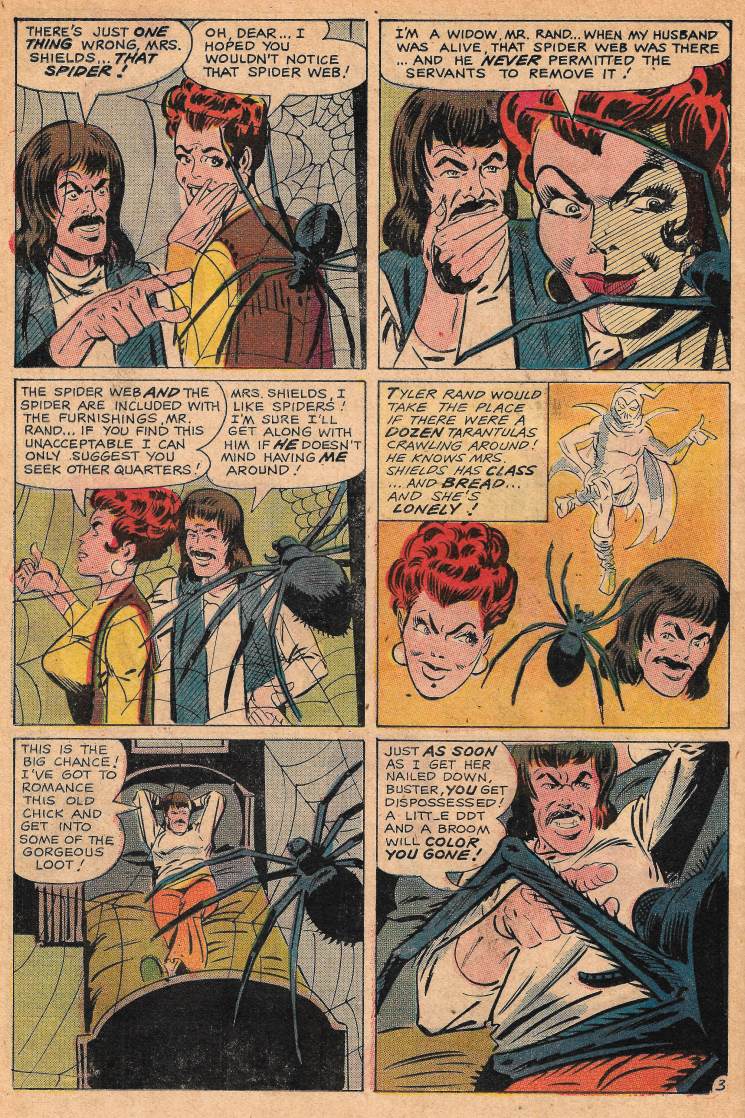 But to do so, Tyler has to find some funding to last a few weeks. And that means purse-snatching, of course. 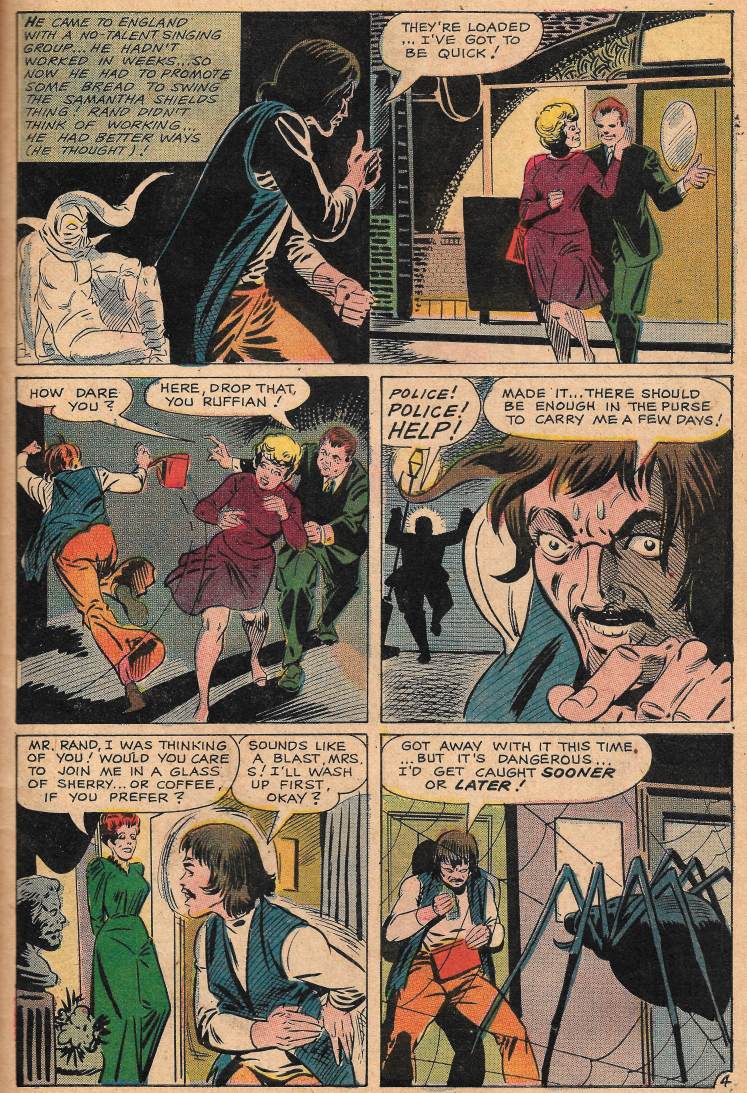 As does Samantha after Tyler cleans up his appearances and starts dressing in her husband’s old clothes. All this wooing might actually work out for the lout. 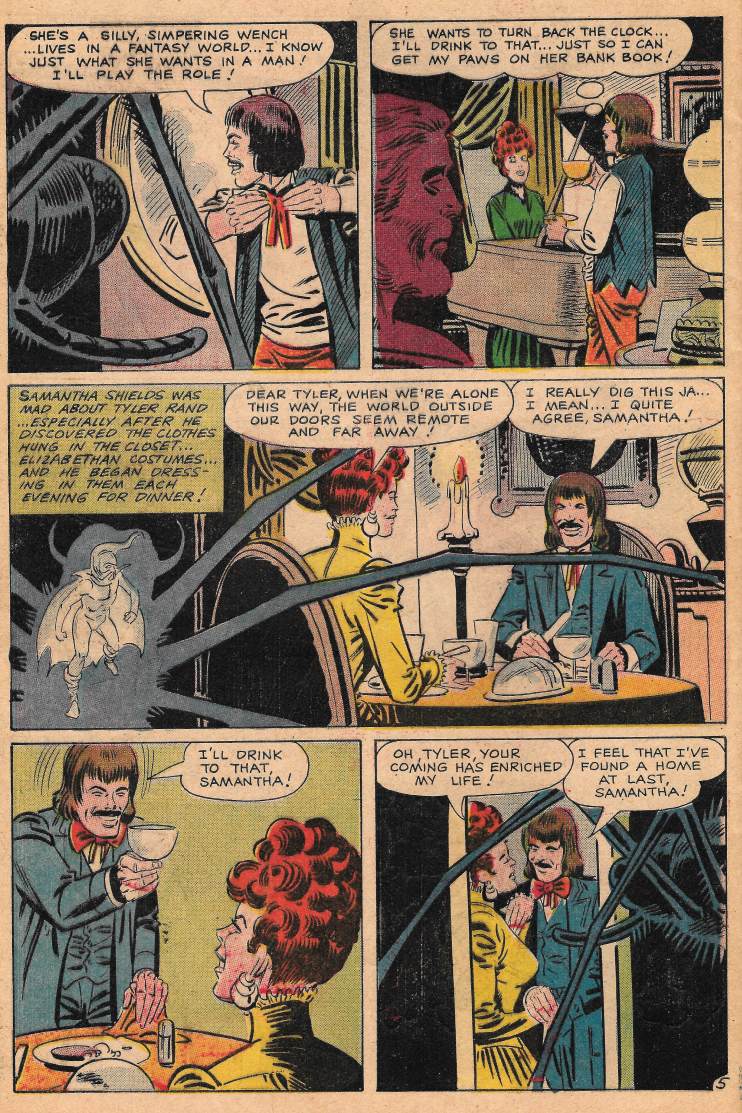 However, even Tyler now seems to be talking to spider like it’s a person. 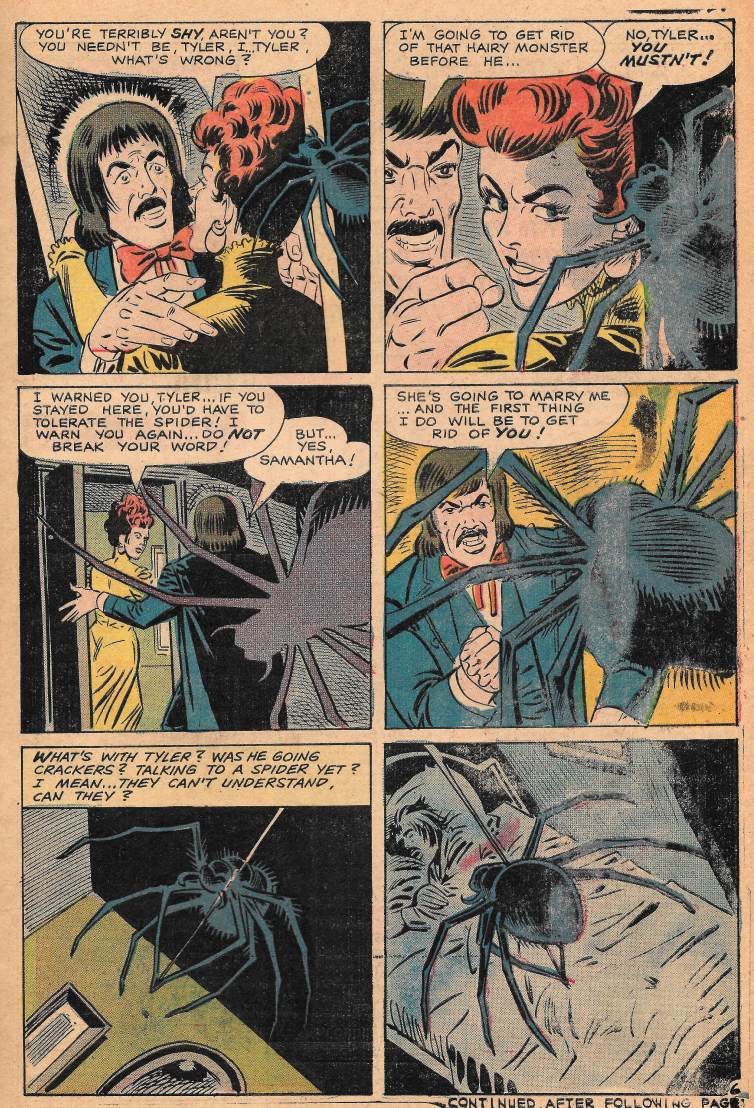 It was too good to last, as the spider (named Hedly) finally decides AGAINST letting Tyler marry Samantha. The next morning finds her searching for a new boarder… 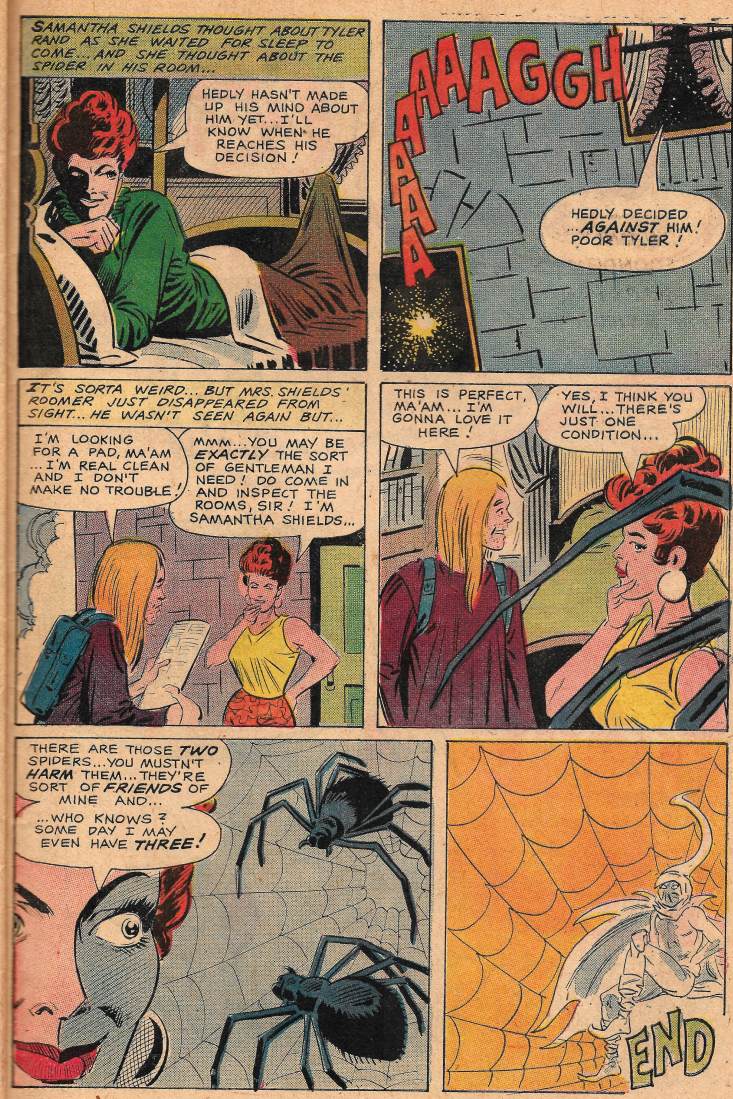 …and now with TWO SPIDERS in her room. Making this actually a tale of a Spider-Man? Well, it wouldn’t be Ditko’s first one of those, would it?

Better story in this last outing than in any of the priors, nice twist and comeuppance at the end. I just wish the art had the weird, macabre allure of Ditko’s first story. That art just really sends me, dig?

In all, this issue of Haunted is more miss than hit. If you are a Ditko completionist, it is a must buy. Aside from one good story (out of four) and the art on another, there isn’t much to go gaga over here. It is one Ditko spider tale that won’t pull you into its web.
Posted by SonOfCthulhu at 1:27 AM