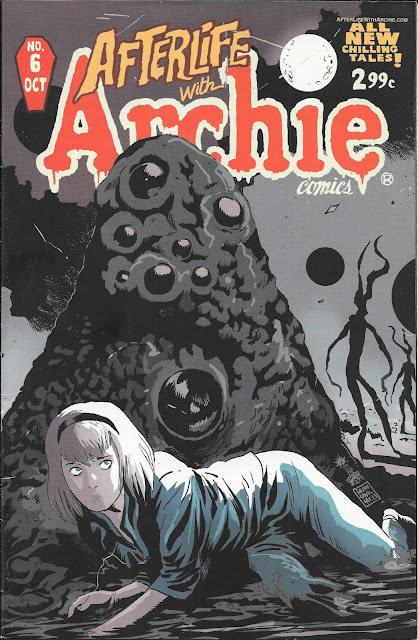 The Riverdale-as-zombie-world takes a Lovecraft break to find out what the Cthulhu happened to Sabrina.

I can’t help but love the nihilistic bent of Afterlife with Archie. I’ve picked up the first trade and scattered issues here and there that confirm this isn’t a parody of the zombie genre. There’s no pun-dealing guffaw in sight throughout these books. It is solid horror, and all the more so since it is beloved characters from our childhoods being eaten alive or infected with a ravenous undead plague.

For those of you who haven’t seen or read the series, Jughead’s dog is hit by a car on the eve of Halloween. He carries the dead pooch over to Sabrina’s house, long known to dabble in all things witchcraft. After initially turning him down, the teenage witch grabs, of all books, her aunt’s copy of the Necronomicon in an attempt to bring back poor Hot Dog.

What Jughead gets back is something mean and hungry for human flesh. Jughead is the first infected and lingers several hours before expiring. He rises again as the zombie king and begins turning the town into a George Romero-fest right as the Halloween dance starts.

Many characters are killed or turned into zombies. But the ace in the hole for me was always Sabrina, who was one of those “get out of jail free” cards of plot devices. I mean she wields magic right?

Even though in one of the first couple of chapters her aunts find out she stole their magical naughty book and banished her for “a long time,” I still kept the faith that she would be back to set things right in Riverdale.

At least until I read this. Because turns out Sabrina’s aunts aren’t the bumbling, foolish good witches we always thought they were. Turns out quite the opposite.

And they’ve had plans for Sabrina from the very start.

Let’s begin with title card giving us a little feel for where this is going. Oh yes, they used the “C” word. Let’s see if my father, dread Cthulhu, would approve of this… 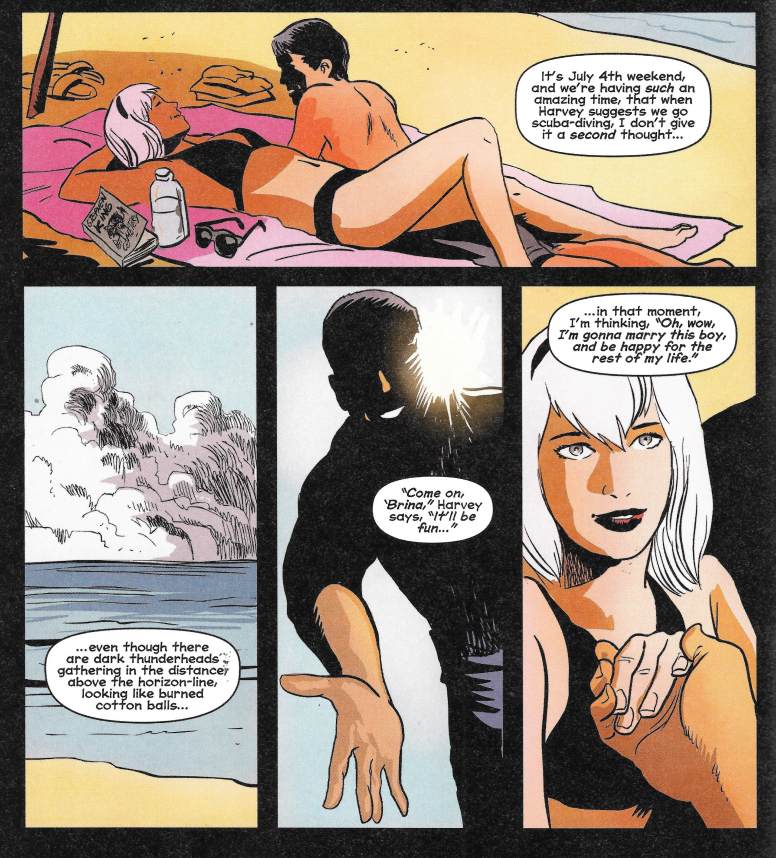 At first glance it appears Sabrina’s aunts sent her someplace amazing, where she and her longtime boyfriend Harvey Kinkle are enjoying and endless vacation.

All is well, Harvey is being a regular jock, doing Titanic from the bow of the boat as Sabrina suns herself. She isn’t feeling all that well, you see. 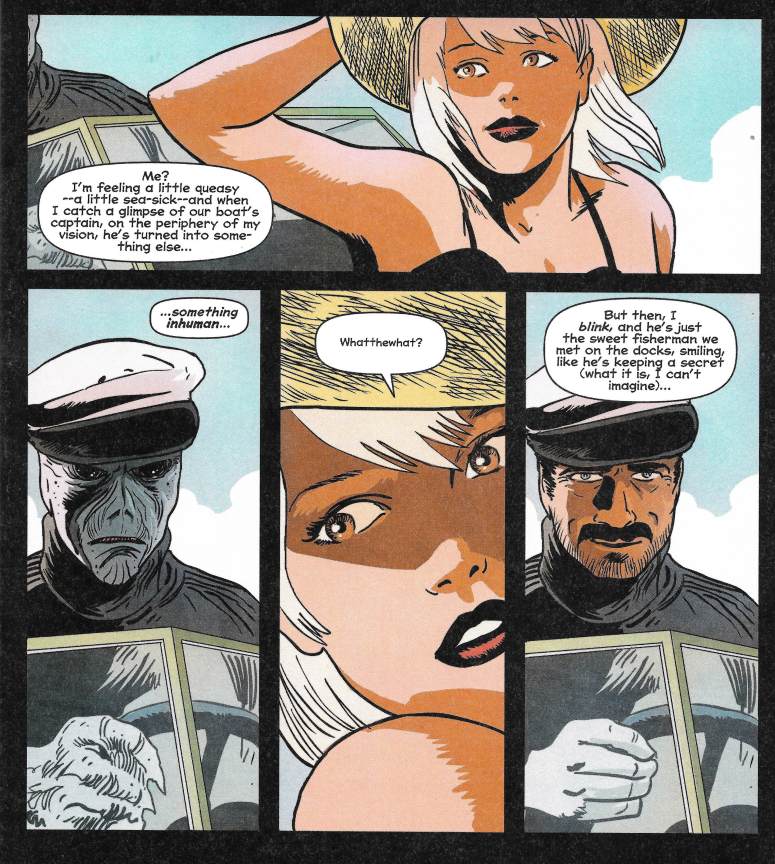 And who would feel well with “Mr. Deep One” doing the driving back there.

But that fear doesn’t stop our teenage sorceress from taking a dive. She should be careful though. These are treacherous waters. 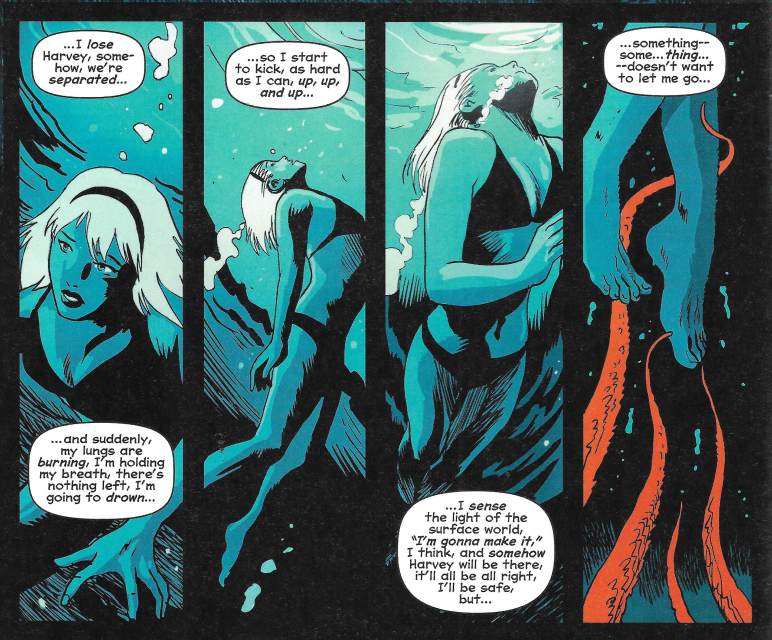 But as the tentacles wrap her tightly we learn this is all just a therapy session with her shrink in this half-way house her aunts have left her in AND OH MY GOD! IT’S HPL HIMSELF!! 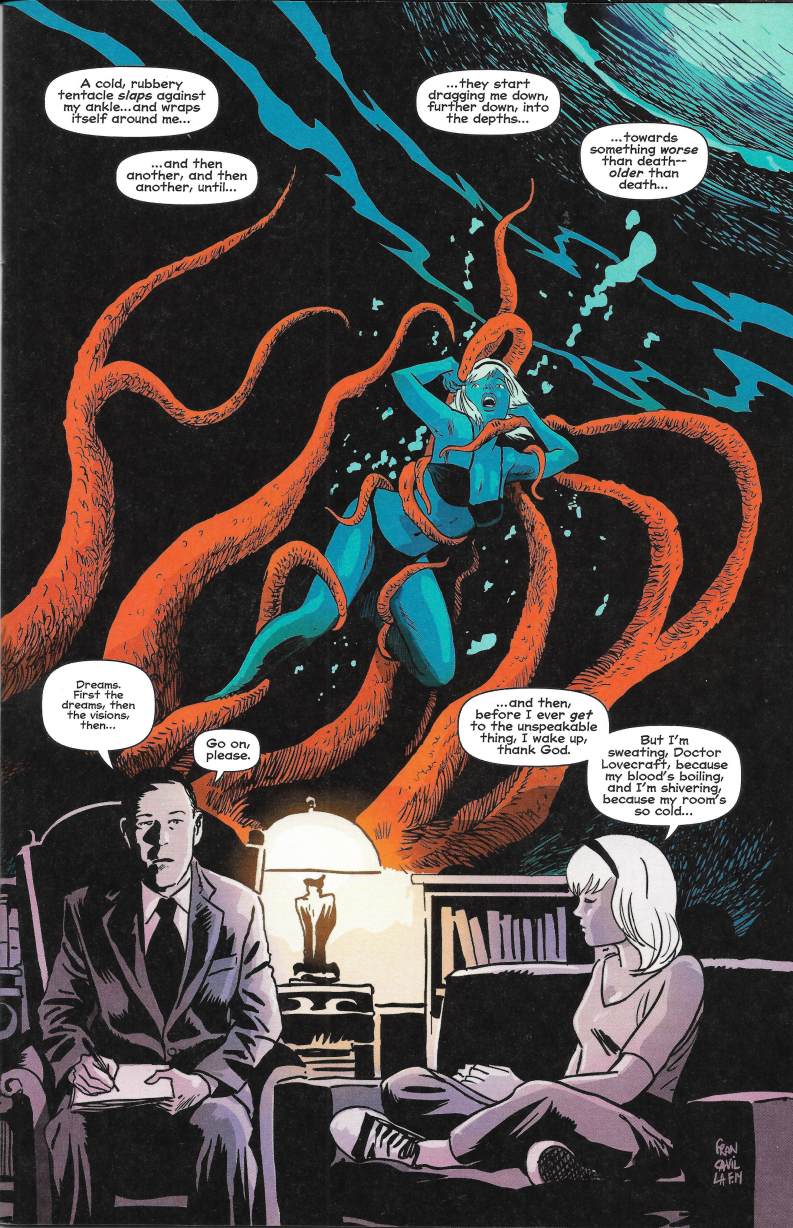 Yes, Aguirre-Sacasa has the balls to make Lovecraft the evil behind all these goings on. 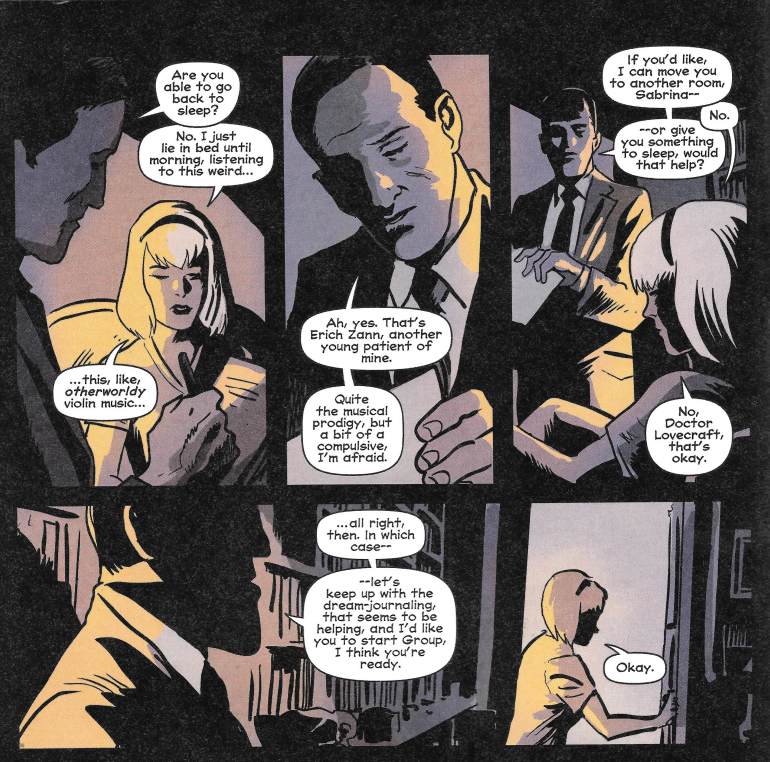 I’m certain you’re going to say I’m making too much of this and perhaps you are right. Perhaps this is all just coincidental and maybe Dr. Lovecraft is there to help Sabrina get through this tough… 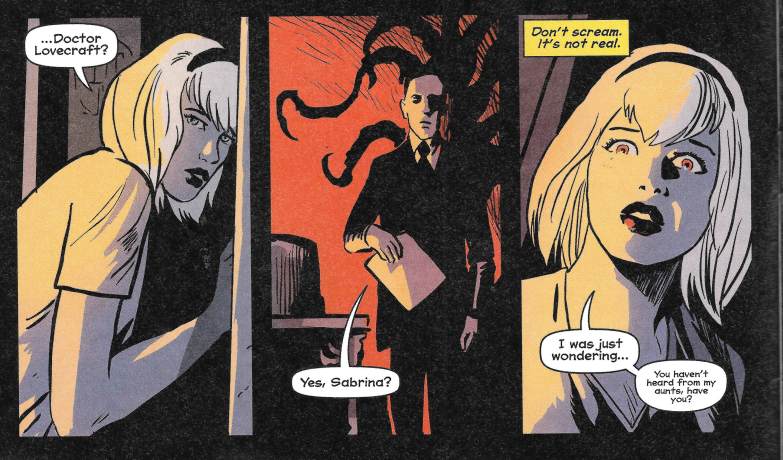 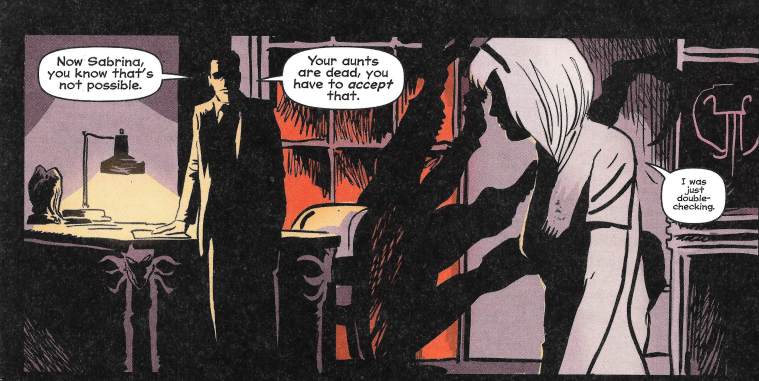 And yeah, she’s never hearing from her aunts again. His answer pretty much guarantees it. 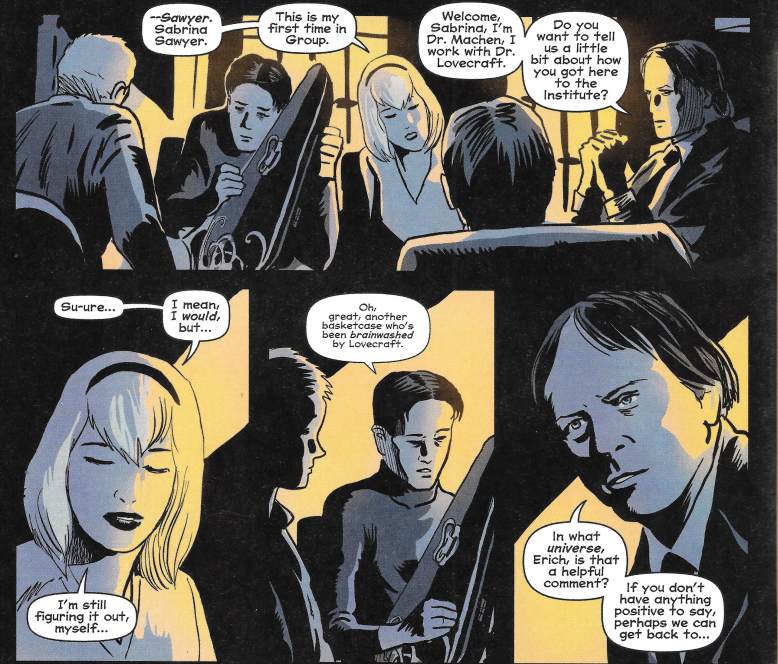 Group doesn’t go much better than sessions with Lovecraft. But what can you expect when your group therapy leader is none other than Arthur “Great God Pan” Machen and one of your fellow patients is Erich “I’m going to make music that will drive you literally insane” Zann. It also doesn’t help when you are being told your entire life is a lie and you can’t even keep the name you feel you go by. What a head trip for the poor girl.

She’s being taught she’s not a witch, not Sabrina Spellman, that her aunts died in a fire…and that she isn’t seeing monsters. 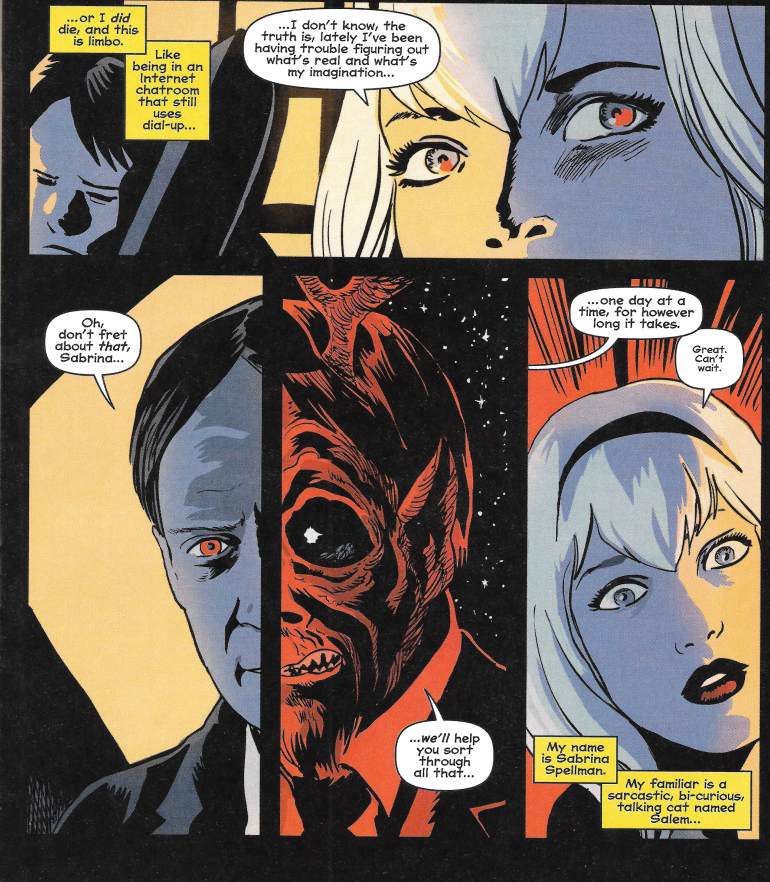 The problem is, those are all lies.

All this leads Sabrina to try even harder to get out of there in some way. She spends the rest of the day attempting to astral project herself or levitate or do any other kind of spell. To everyone else it appears she is simply meditating. Zann has some kind words for her. Appears they are all in the same predicament. 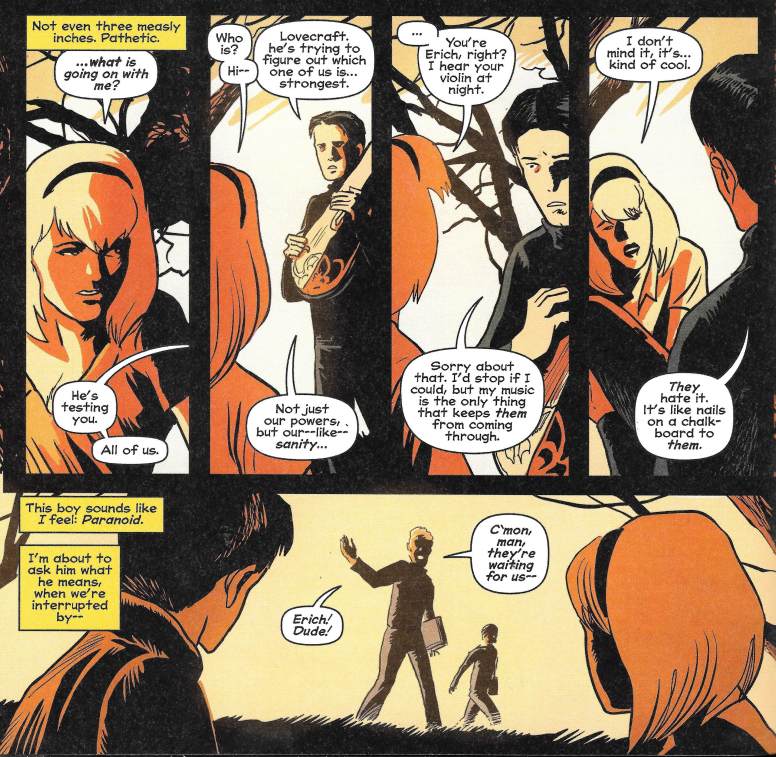 And even though Sabrina treats him kind of crappy, he gives her good advice. 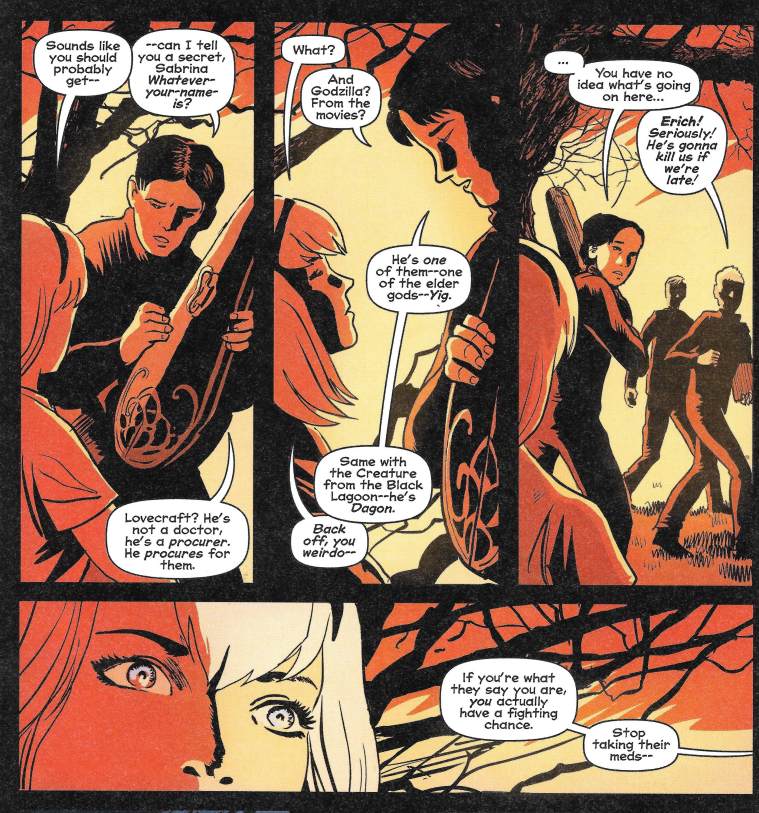 Advice she takes that very evening by palming her meds. Immediately she starts to feel like her old self again. 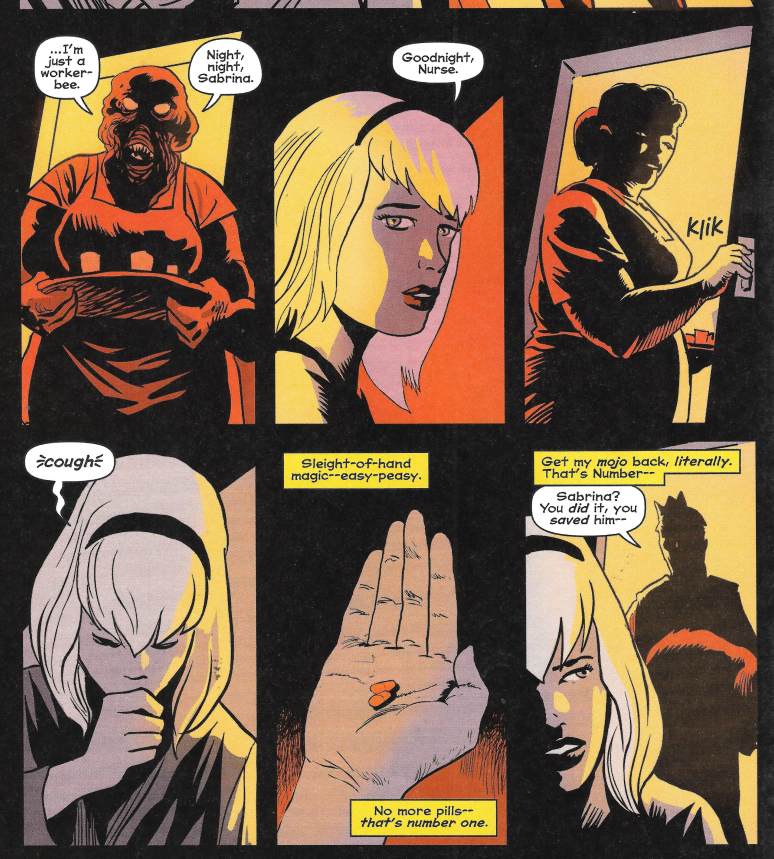 The only bad part about returning to “reality” is that there are some memories she certainly doesn’t want to remember. 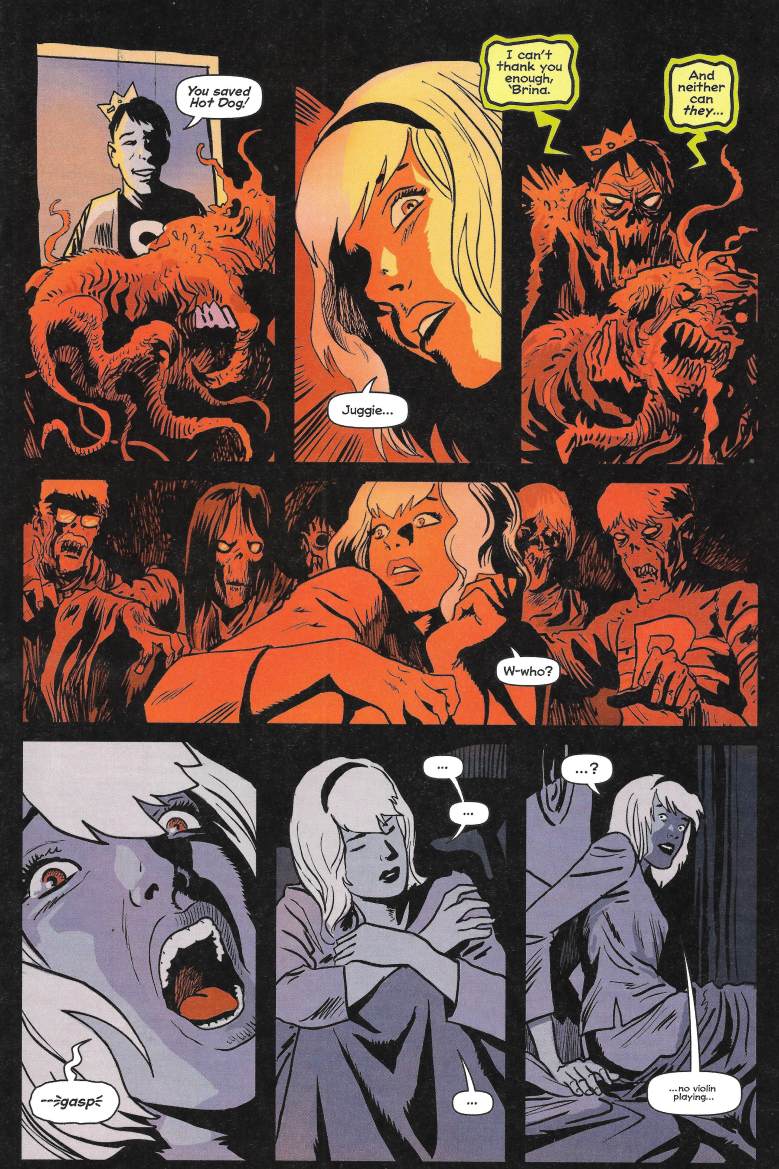 Like this dream of bringing Hot Dog back to life for Jughead. It is a nightmare she could do without. Unfortunately, it is a recurring haunting that will never go away.

Out of fear and loneliness, she sneaks off to see Erich only to find his door locked and the boy in a frantic state. 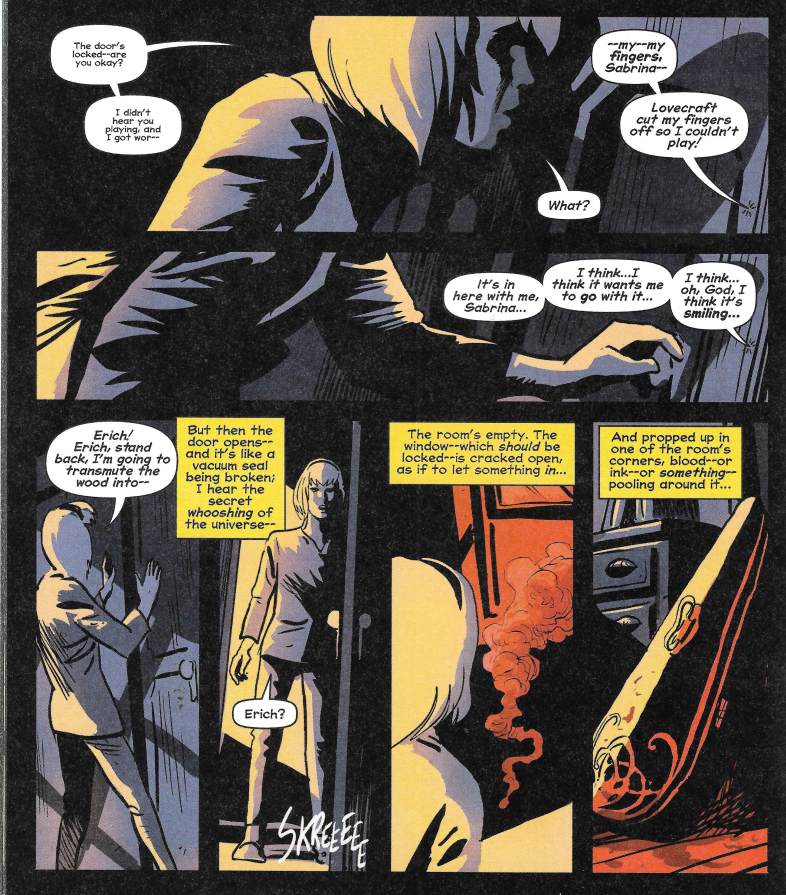 I can’t tell you how disturbing this next part is. These two gents really know how to mess up your head. I swear this takes the great Afterlife with Archie story and makes is so much deeper and better. 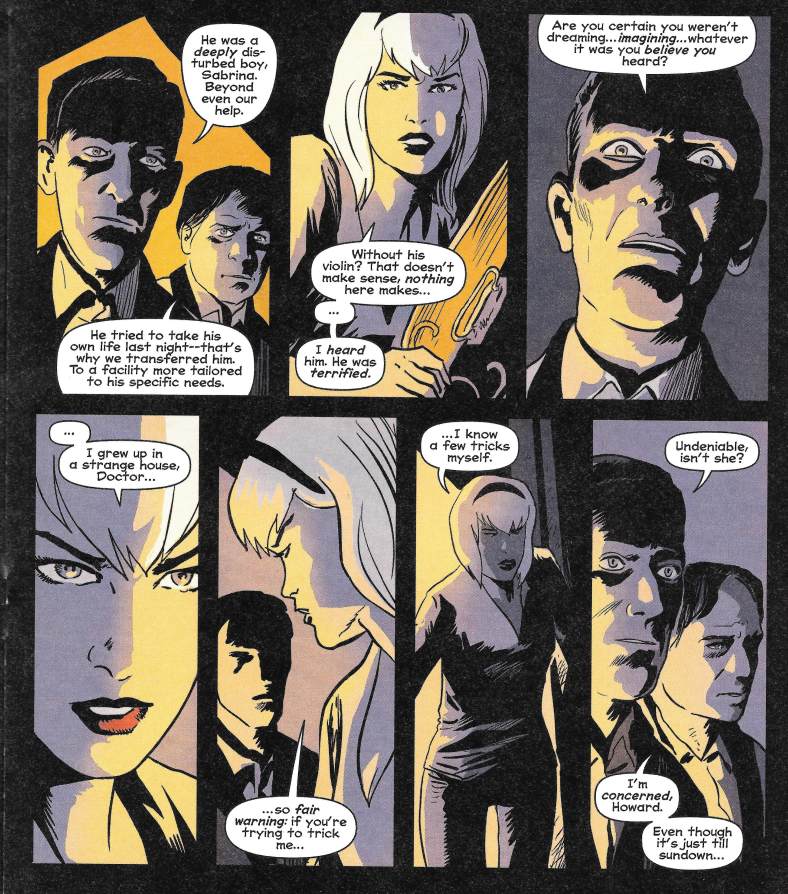 Sabrina doesn’t take the laying down. She confronts Machen and Lovecraft, pushing all the wrong buttons. Angry, she gives away just how powerful she is and that might be a fatal mistake here..

Howard appears to think stirring things up is exactly what Sabrina should do, so they leave her to confront the other students about what they know. She starts with this unassuming artist… 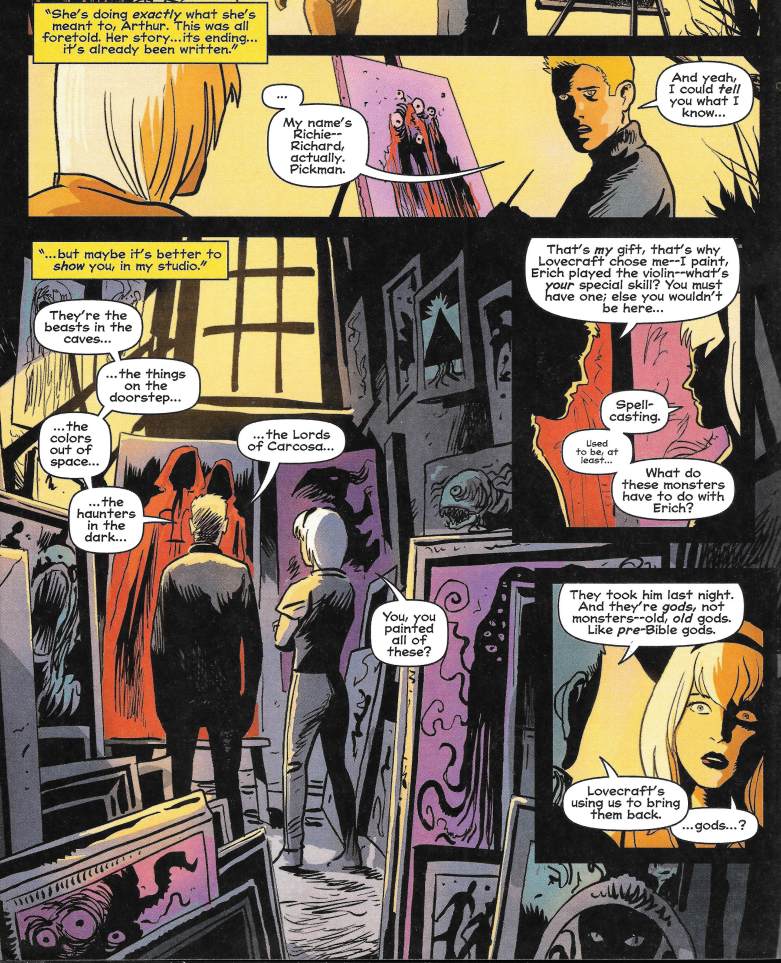 …who ends up being Richard Pickman, the main character of Pickman’s model and ends up a flesh-eating ghoul. Pickman’s on the right track with all his thoughts about which beasties are at work here. 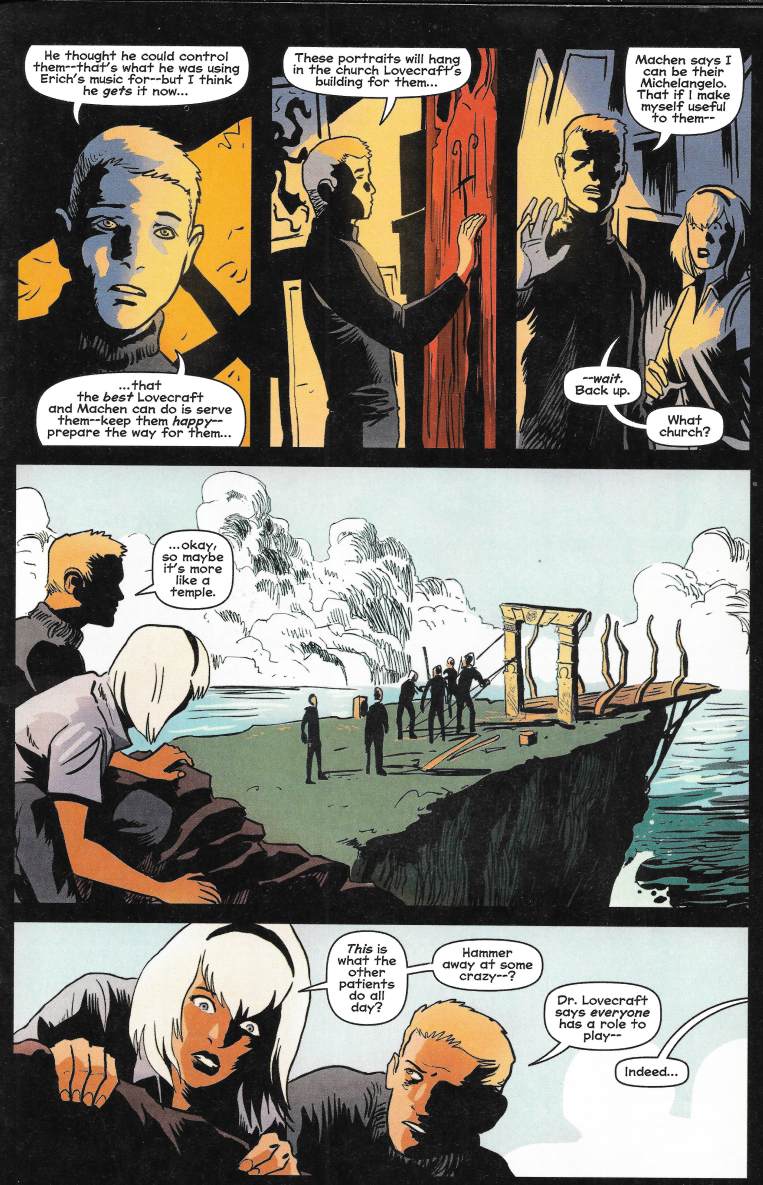 …and he also knows the complete score. That Lovecraft has made a deal with those outer gods. That if the ruler of this asylum can’t control them, he will at least serve them and prepare the way for them. 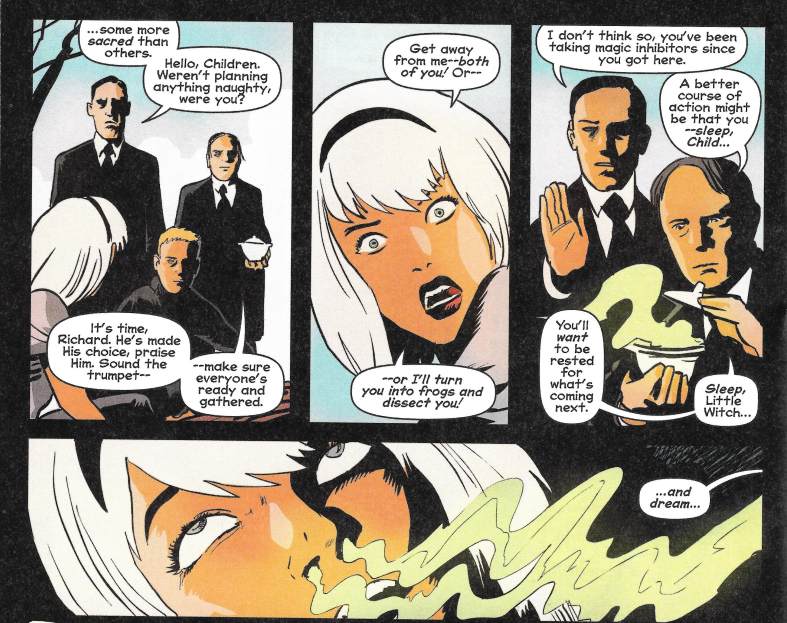 Sabrina is caught at that moment, unfortunately, as Lovecraft and Machen show up with a bowlful of sleepy vapors which they use to drug the poor girl. 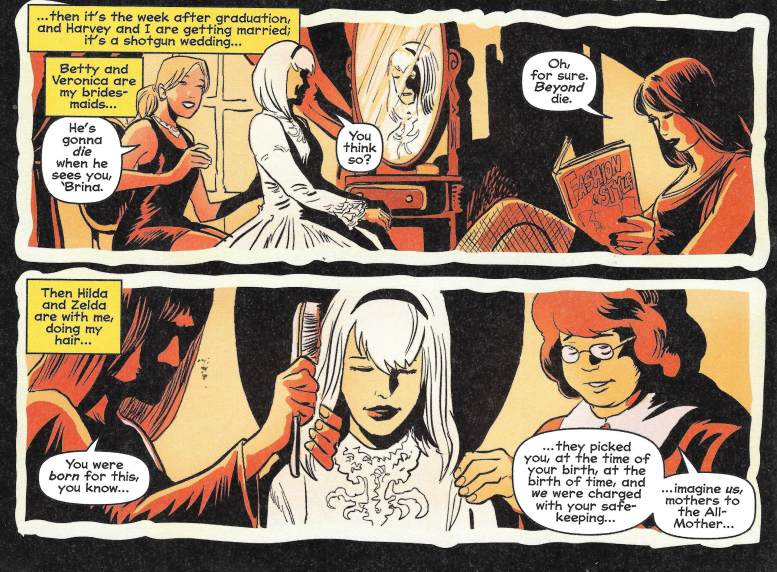 And in that drugged sleep, Sabrina believes it to be her wedding day and she is surrounded by friends and loved ones. She thinks she’s getting married to Harvey… 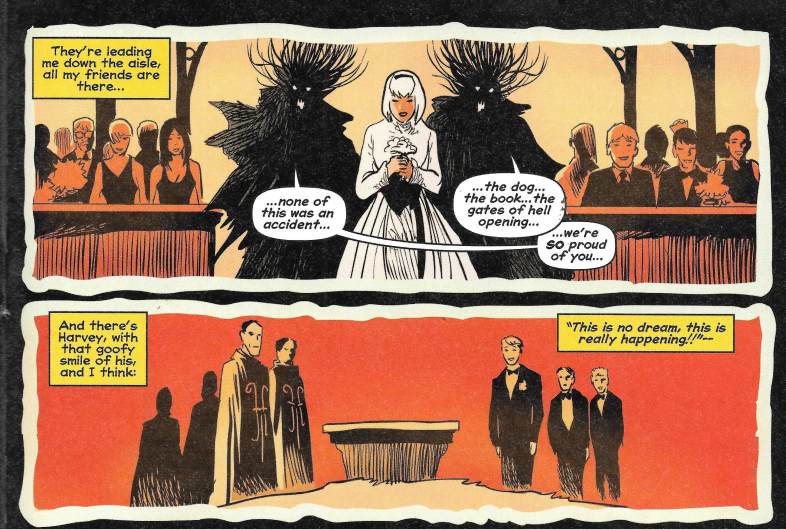 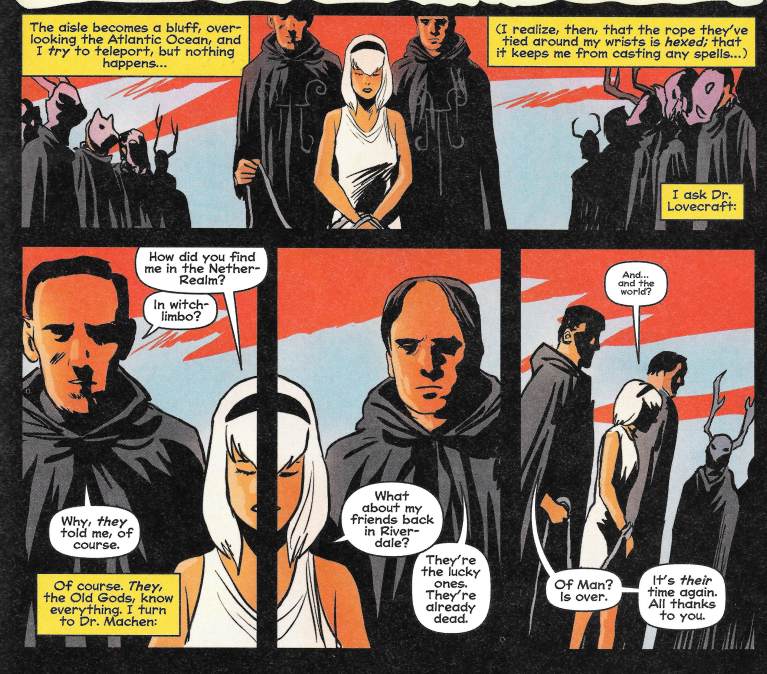 …before being dispelled completely. She asks Lovecraft some questions that really don’t need answers. She is doomed. Riverdale is doomed. Our world is to be no more.

And then the just draw out the dread. Sabrina remembers Harvey taking her to see the original version of the movie “The Wicker Man.” It sparks a horrible thought in her head… 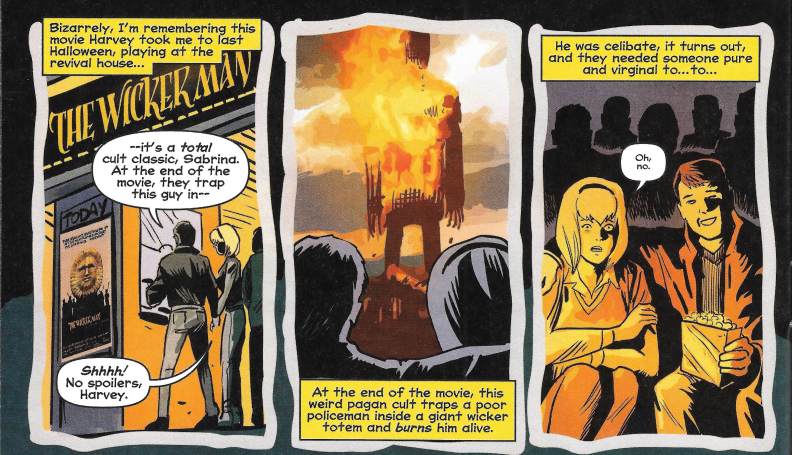 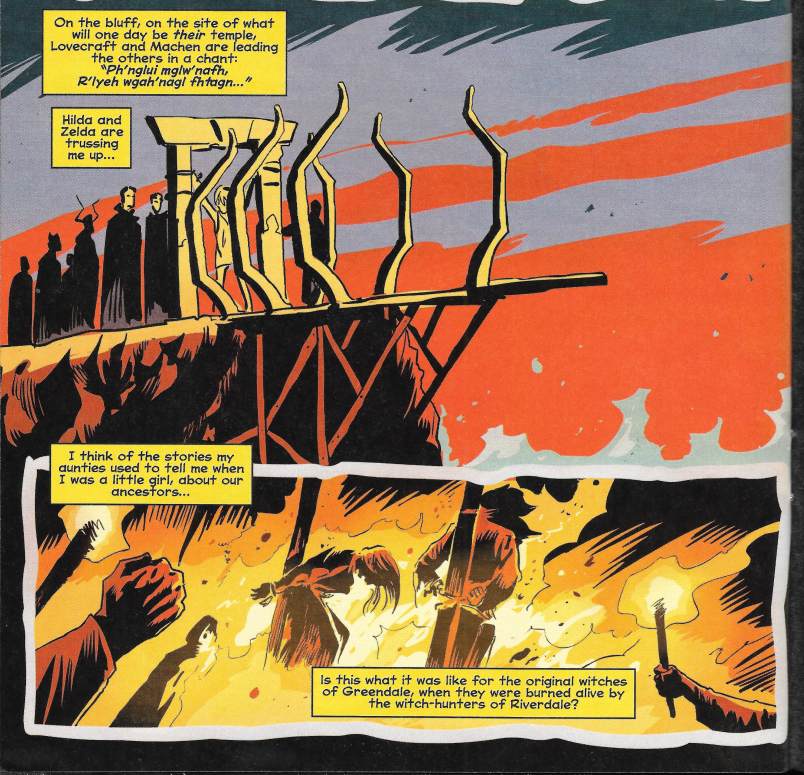 Her aunts show up to truss her to the altar, and it is telling that they are still alive and have allowed this to befall their niece. There she hangs, just like witches who were burned at the stake to appease Gods far less monstrous. 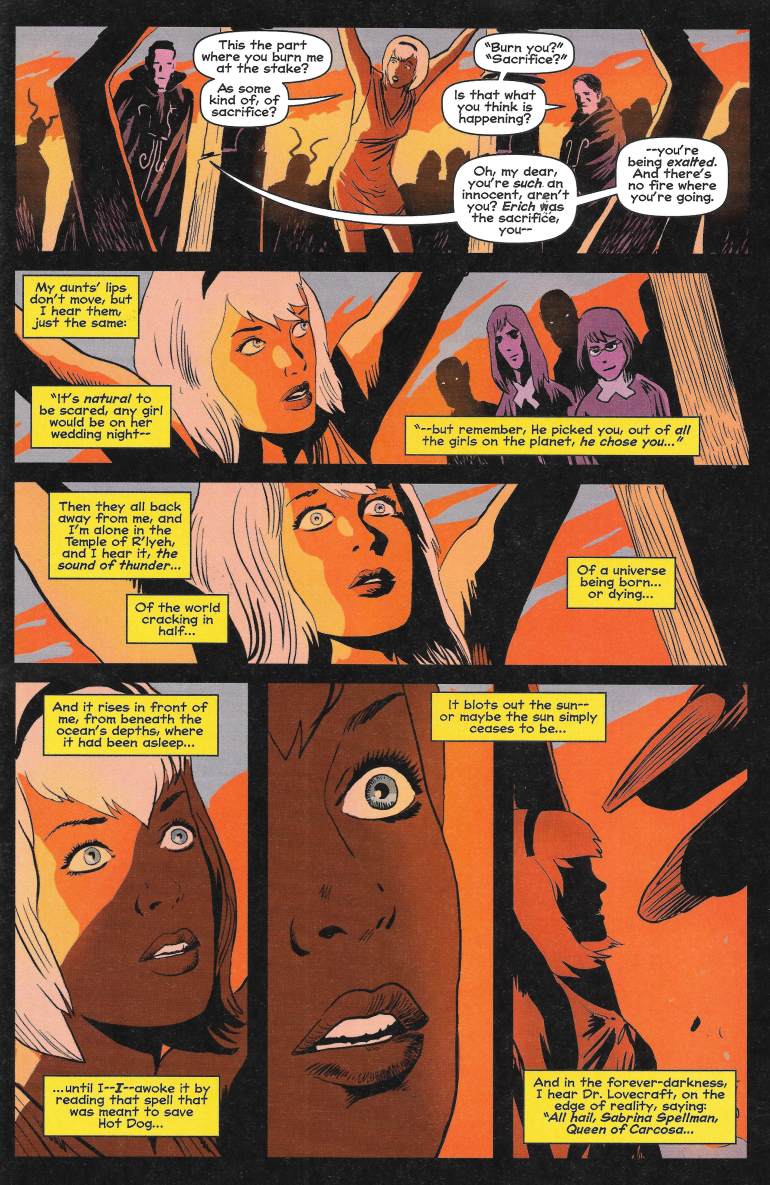 But Sabrina isn’t to be burnt, as she suspects… 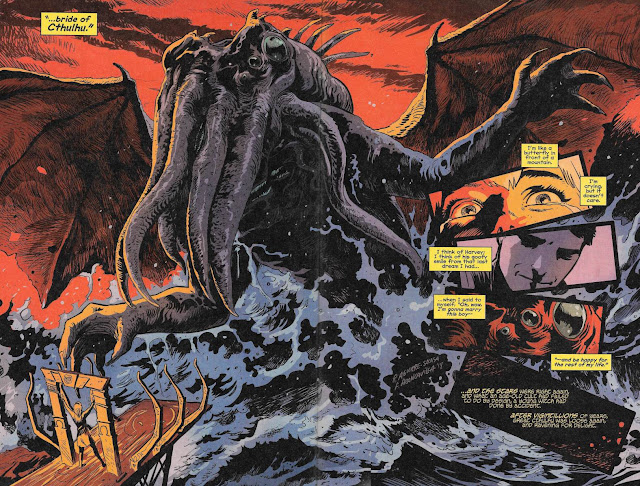 No. She’s to be wed. And in her broken mind, she cannot tell reality from fantasy. Nor can she feel the horror at the fate that has befallen her.

Jeeze, what a book! Unexpected, to say the very least. I’m glad we got something more with this story than just the zombie tale. Not that the prior five issues weren’t wonderful in their own way, it’s just that this ratchets it up in a very different direction. The zombie menace was orchestrated by Cthulhu cultist with the agenda of wiping out humanity to make way for the outer gods. Superior!

I love the HPL stuff. The two HPL story characters Aguirre-Sacasa brought in were both well selected and effectively used. Loved the surprise appearance of Arthur Machen as well. In the letters section, both artist and writer admitted they were Lovecraft fans and it really comes through.

For those of you who haven’t picked up the two trades of these books, I’m telling you that they aren’t to be missed. The stars are right for you to buy them…
Posted by SonOfCthulhu at 2:49 AM