Godzilla: King of the Monsters #19 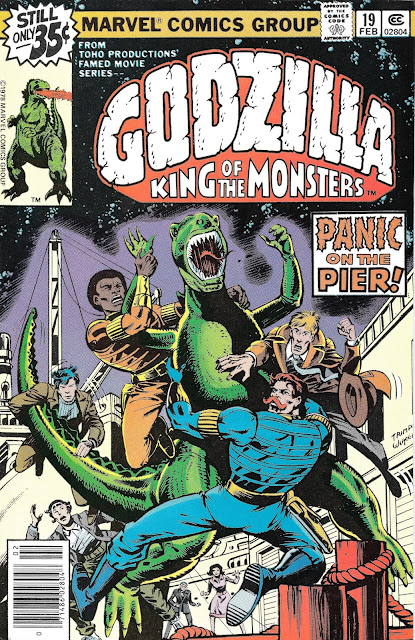 Marvel had no idea what they were doing

In the late 70’s someone at Marvel signed off on a Godzilla comic book series. They might be the hero of this piece, but there is definitely a villain. That person is the guy that accepted a contract from Toho Studios that licensed Godzilla but none of his foes or allies.

Talk about a letdown.

Marvel probably didn’t think so, as they fitted the round peg of Godzilla into the square hole of the Marvel universe proper, creating adversaries of the Marvel heroes and giving SHIELD agent “Dum Dum” Dugan the task of chasing off or killing the creature.

He received assistance from everyone from the Avengers and the Fantastic Four to Devil Dinosaur & Moon Boy and Doctor Doom. The series ran for 24 issues before imploding under its own steam and the property went into limbo for a while, emerging in much better shape at Dark Horse Comics in 1987.

While my criticism may seem harsh, the promise of a "four-color Godzilla comic" creates pretty big shoes to fill. While the movies haven’t always been serious affairs, there is something about the giant lizard that I have a soft spot in my heart for. That’s why I can’t bear to see him treated thusly.

Welcome to issue number 19 of the ongoing. Henry Pym, also known as Ant Man, succeeded in shrinking Godzilla two issues prior to a six-inch monster. Now after an entire issue fighting sewer rats, we have Godzilla starting to increase in size as the gas wears off. Currently he’s about the size of an average Asian man, if that Asian man happens to be Rob Takiguchi of Team Godzilla. 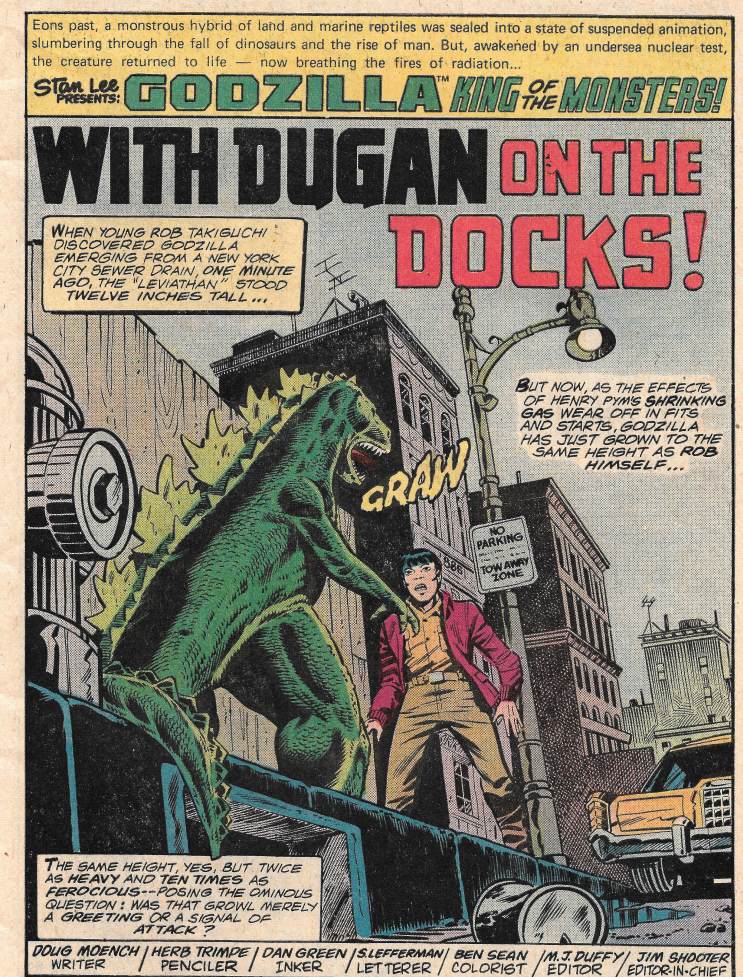 Rob has been searching with the rest of Team Godzilla and SHIELD for the lost monster, but now that he’s found him it doesn’t look like he has a clue what to do with him. I mean, he’s heavier than the young man AND has claws and sharp teeth. Not much Rob could do against him.

So, he goes the sensible route and runs the heck away, right? 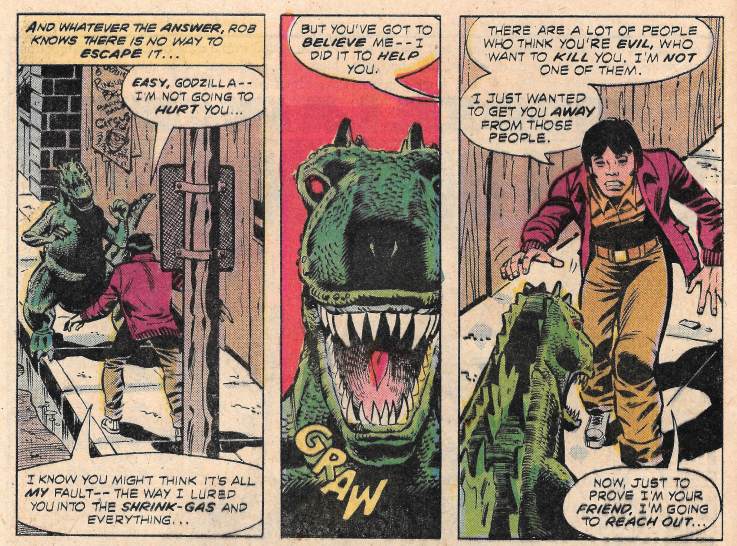 No. He treats him like Barney the Purple Dinosaur and strokes him gently on the head. 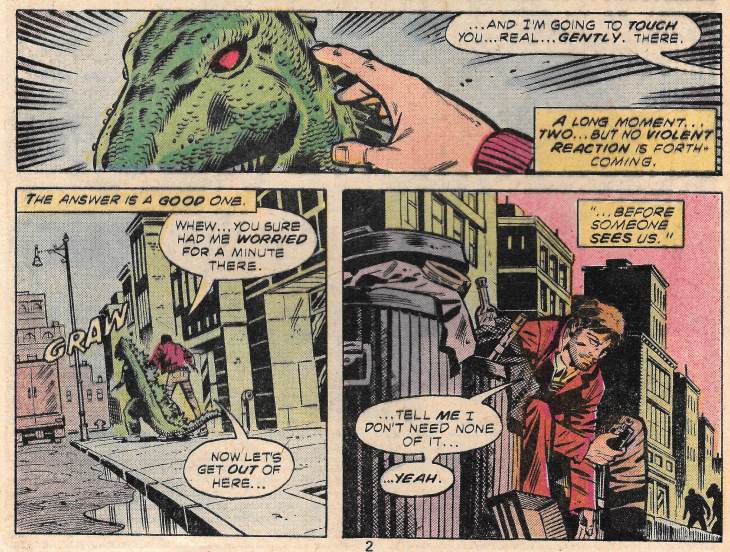 Seriously! Worse than that is that it works. Now they walk shoulder-to-shoulder down the street. I kid you NOT this is what Marvel did with the Godzilla license.

Oh! And they had him scare the crap out of a bum! 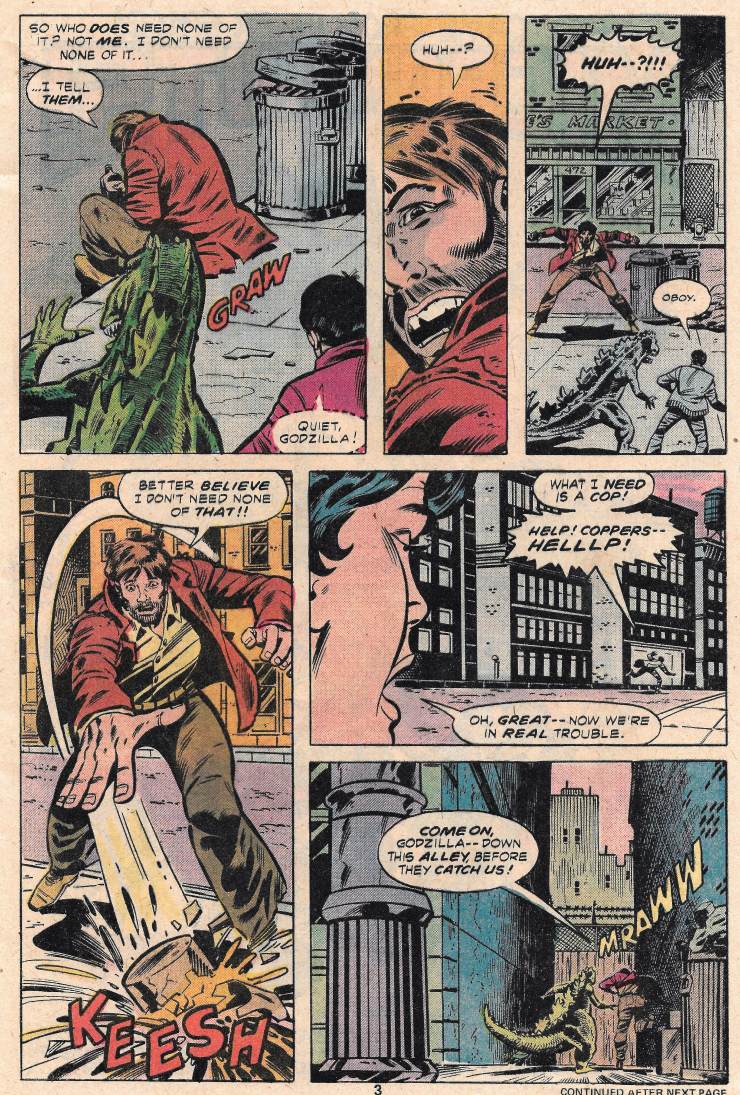 Who runs off calling for the cops. When a mounted officer does answer his call, Rob and Godzilla are trapped in an alleyway, so after some quick thinking on Godzilla’s part, they escape. Instead of just toasting the cop and his four-legged snack. Rob even starts to treat the monster like a pet dog. It is so…messed up, that I can’t even…. 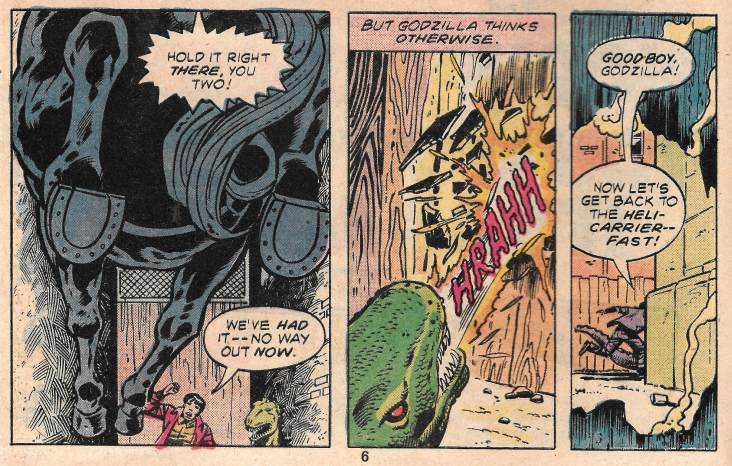 While Rob makes off with the medium-sized monster, the rest of Team Godzilla makes their appearances, as well as Dum Dum and Gabriel Jones from SHIELD. They decide to call it a night before the muggers come out. 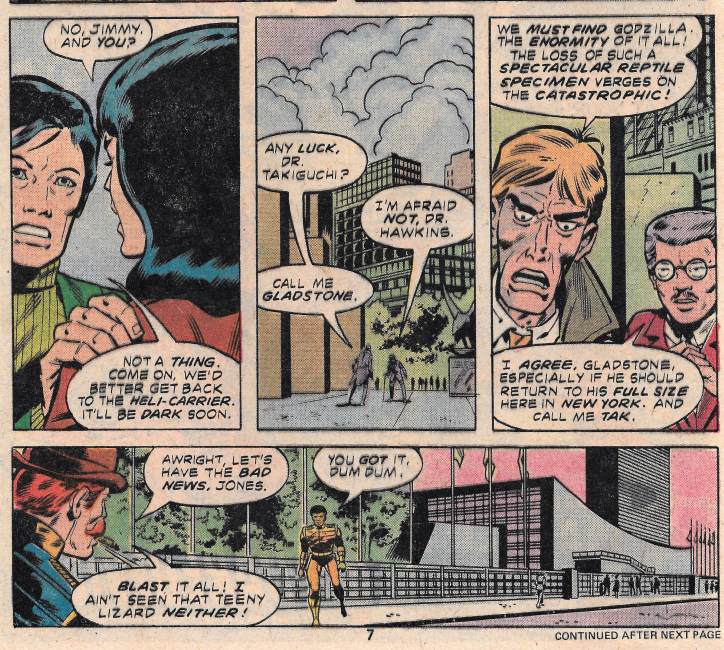 And speaking of muggers coming out, Rob has disguised Godzilla with a handy trench coat and hat he….no, the book doesn’t go into where that coat and hat came from. And I don’t want to know. So it’s easy to see how they might be mistaken by muggers as prospective targets. 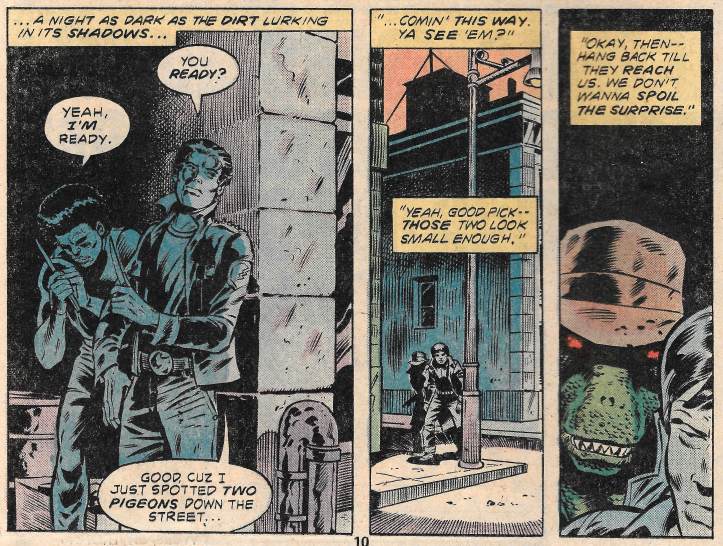 I remember thinking how much I really wanted to see Godzilla fight muggers. And Marvel heard me and gave me exactly that. 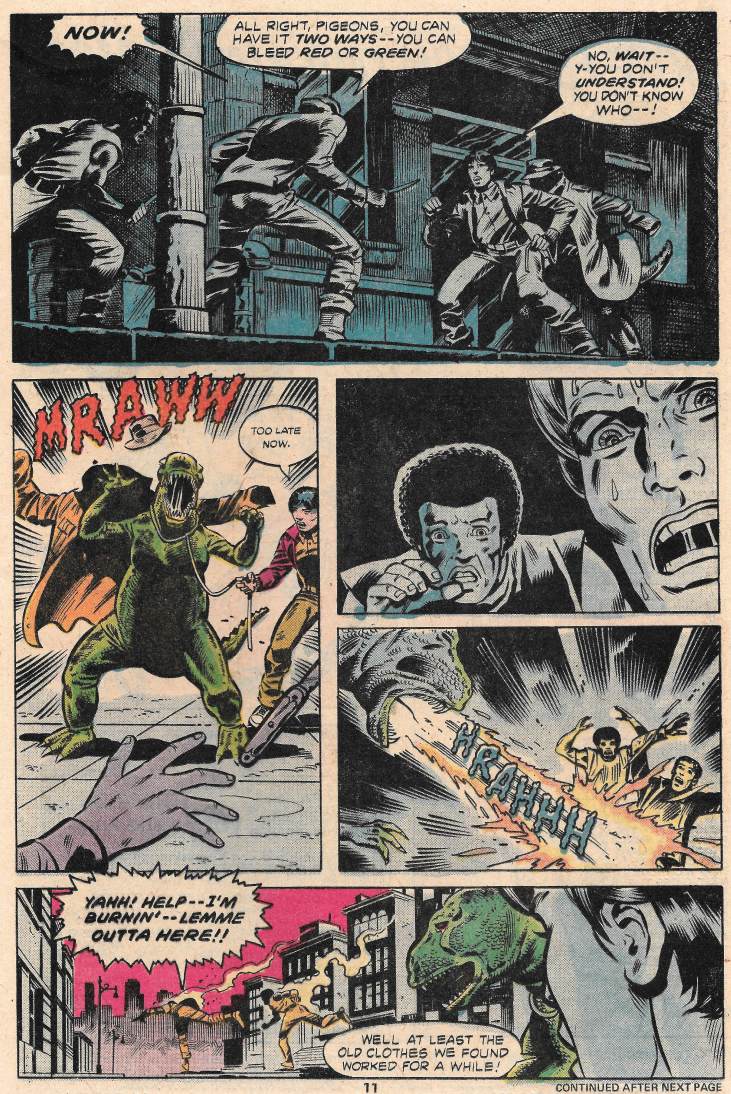 I still chuckle at Godzilla bursting from that coat like he knows revealing he’s a human sized T-Rex on a leash will scare the living poop out of someone.

Back at the helicarrier, the gang is about to give up when suddenly… 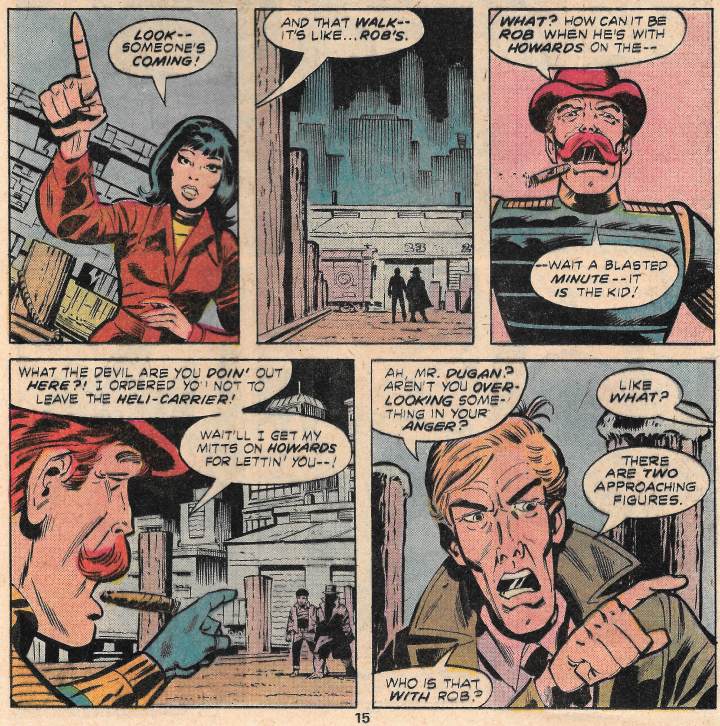 It is obvious that I have long overlooked the ability of a well-placed hat and trench coat to conceal the identity of a human-sized reptile. At least until he grows again. 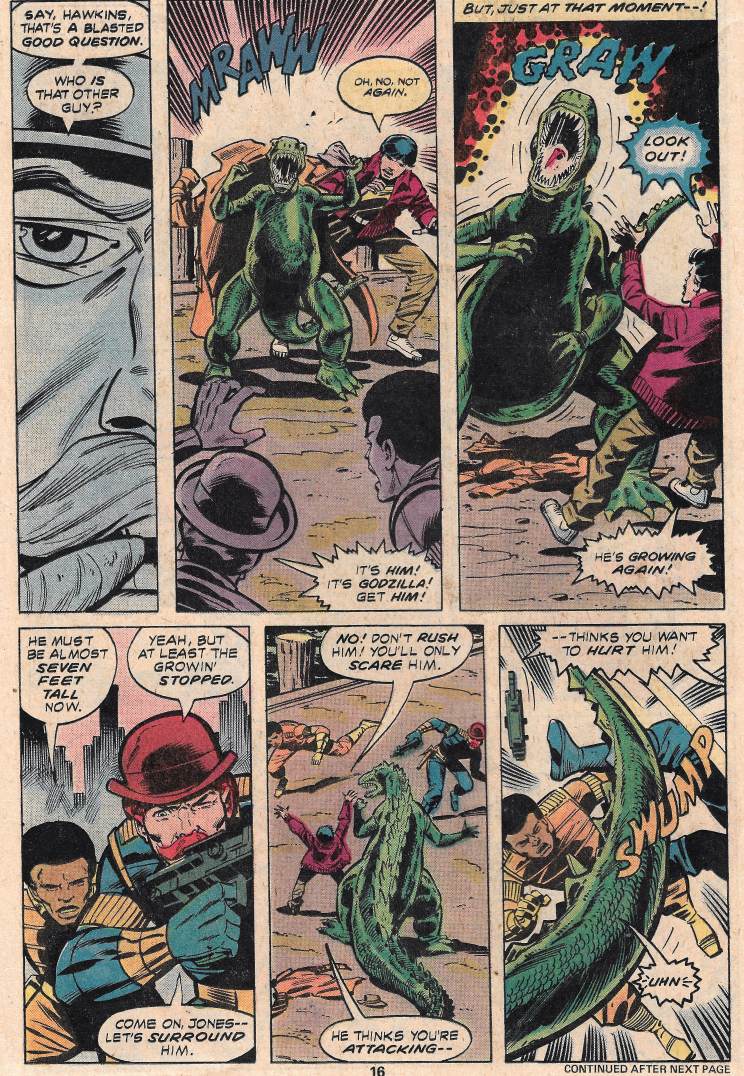 But here Dum Dum lives up to that name and the tamed Godzilla decides to get a little payback for the SHEILD agents tailing him for the last 18 issues by going mano-a-reptilo with them. 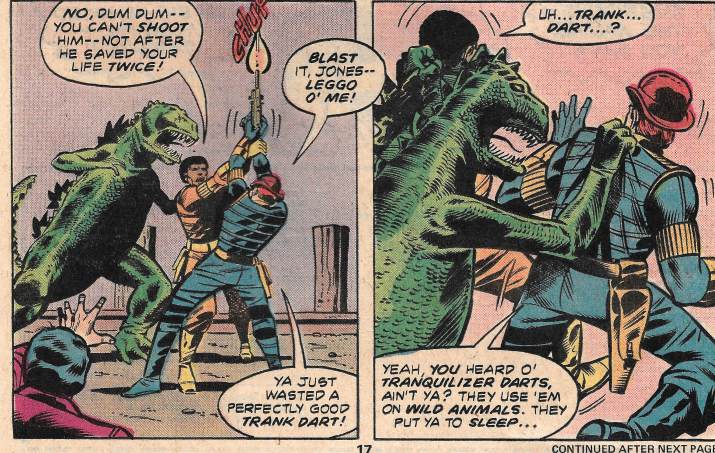 Dugan tries to hit him with a tranquilizer dart, which Gabe misinterprets as a fatal attack, allowing Godzilla to give him some odd kind of “shirt weggie”. 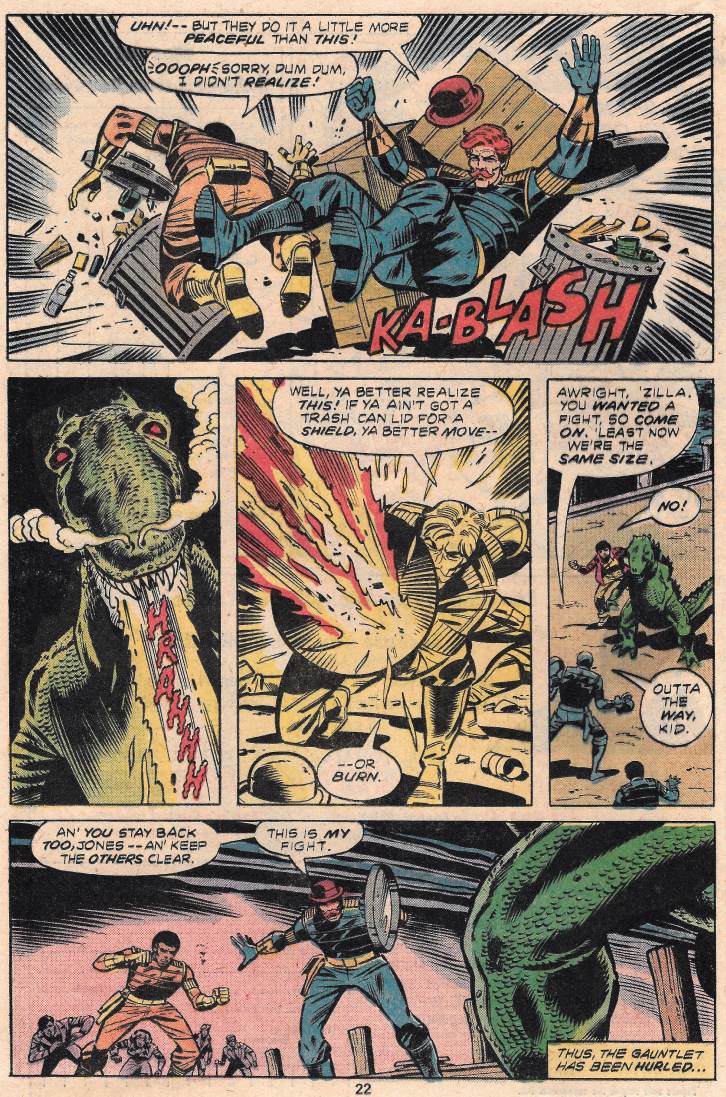 Dugan gets tossed around and almost quick-fried until Rob jumps in.

But the Irishman doesn’t know when to quit a fight and makes like Sir Lancelot. Godzilla is not impressed. 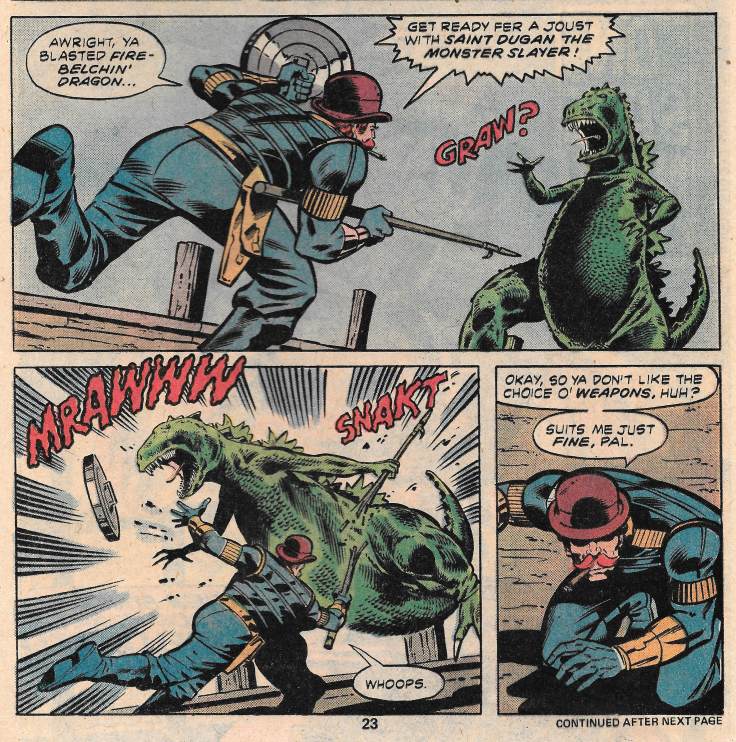 So the scrappy but not smart SHEILD commander starts PUNCHING the giant lizard. And Gabe Jones jumps on his back like he’s trying to tame a horse. This all ends exactly as you’d expect. 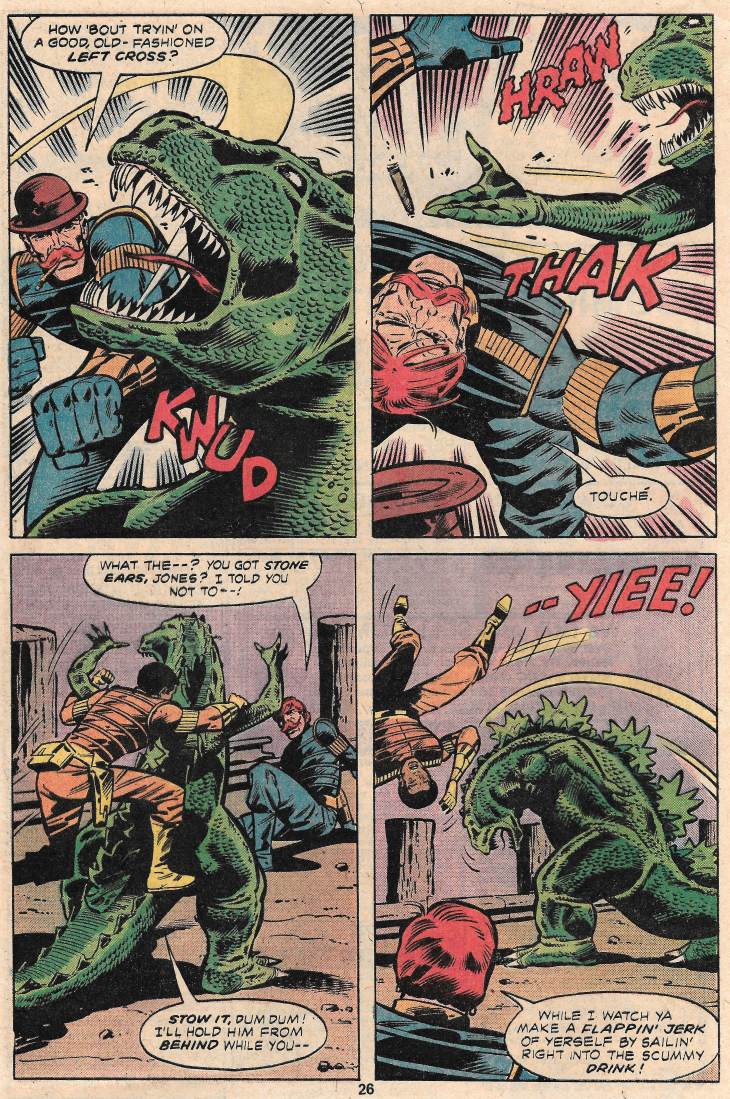 Gabe being thrown makes Dum Dum even more mad and driven and I can’t believe the comic is now down to Godzilla fighting normal sized people in what amounts to a WWF match. 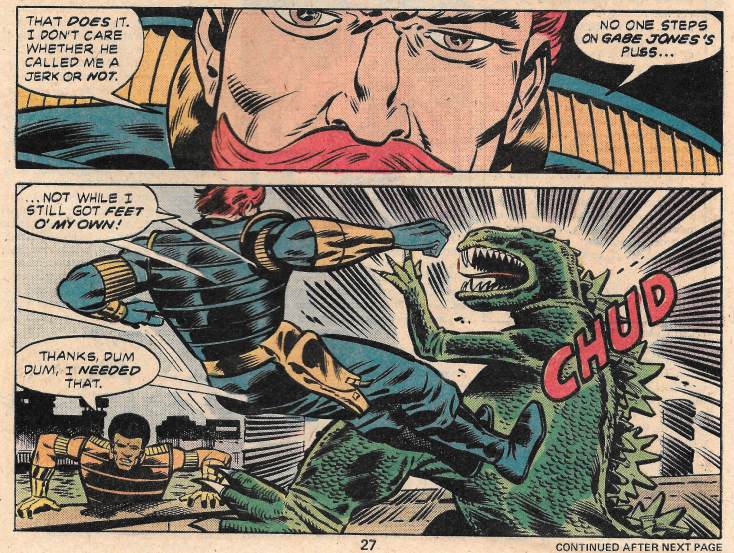 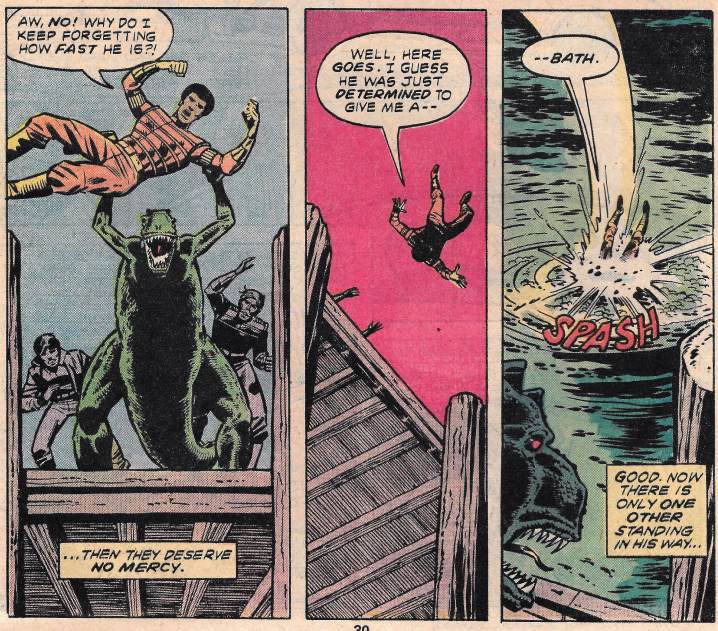 …before backhanding Dugan and stalking off into the city alone. 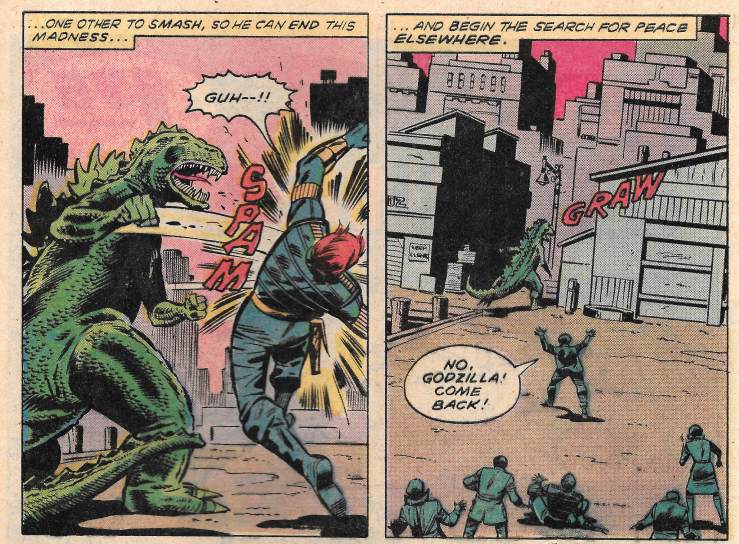 Rob is pretty broken up by all this.

Marvel wasn’t done with our friendly lizard for another five issues and in those aforementioned issues two of them involved sending him back in time via Doc Doom’s time machine so he could fight Devil Dinosaur and Moon Boy. I sure hope those don’t come my way next. I don’t think I could take it.

Posted by SonOfCthulhu at 2:33 AM