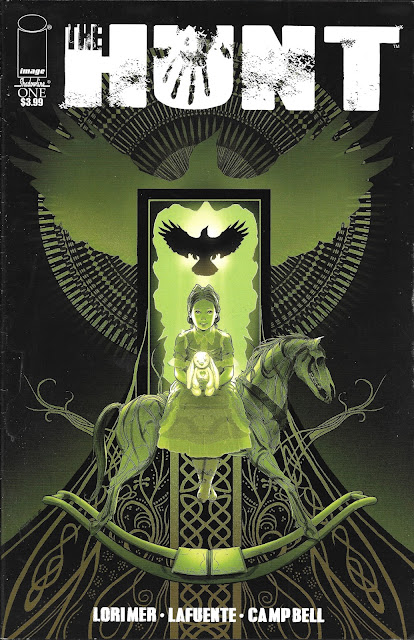 Intriguing beginning to the mystery of a stolen soul

Occasionally the fifty-cent bins bring unexpected books to me. The Hunt’s first issue appeared there a couple of months ago and out of curiosity, I snatched it up.

A five-issue miniseries from 2016, The Hunt felt like an old-school horror movie and the product of a unique Irish voice. I’m going to spare the long intro on this one because discovering this story is like unraveling a bit of a mystery. It starts out as a pretty good one, too.

We begin in Wicklow, Ireland back in September of 2010. Orla’s father has taken ill. He has cancer and in two months’ time will be dead. Orla, his daughter, is broken-hearted and using her drawing as a way to escape how she feels. Her Mother is struggling with all that is placed upon her and her younger brother is oblivious. 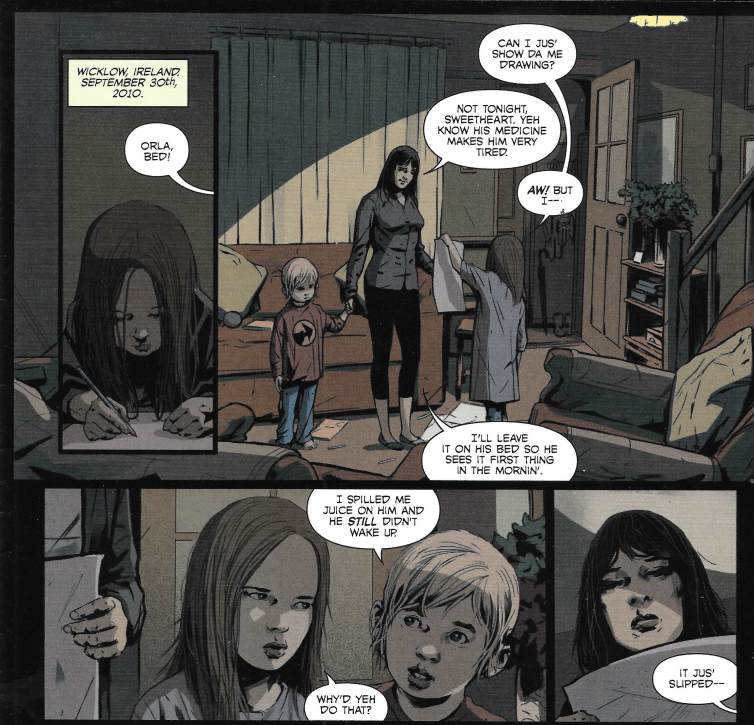 That evening, after the usual bickering kids do with siblings, Orla heads to bed. However, she is woken by murmuring and an unexplained light coming from her Father’s room down the hall. 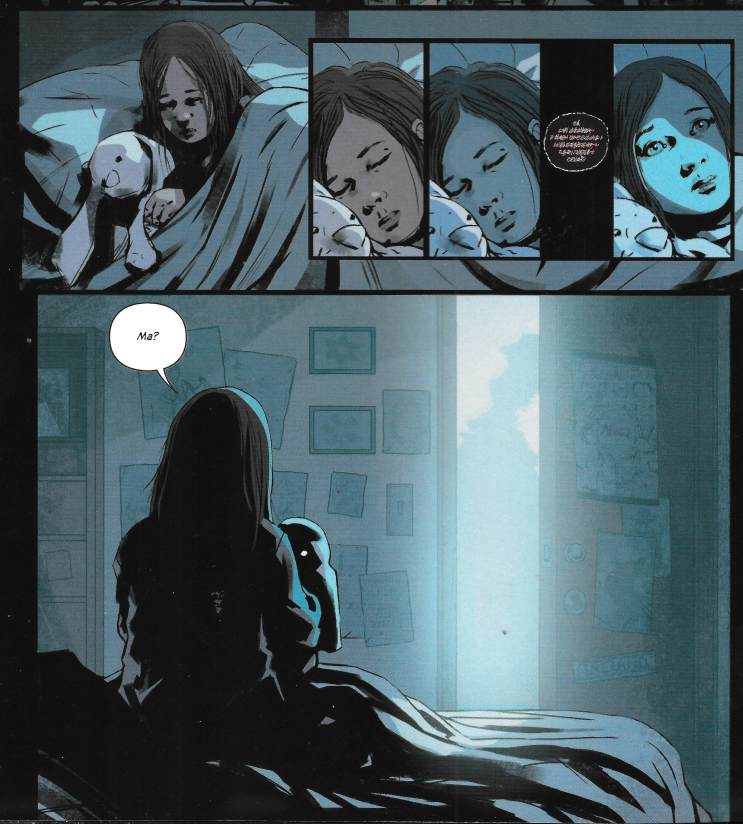 She takes her stuffed animal and wanders down the hall to her Dad’s room to find a sight that startles her. Orla will spend years overcoming what she is about to witness. 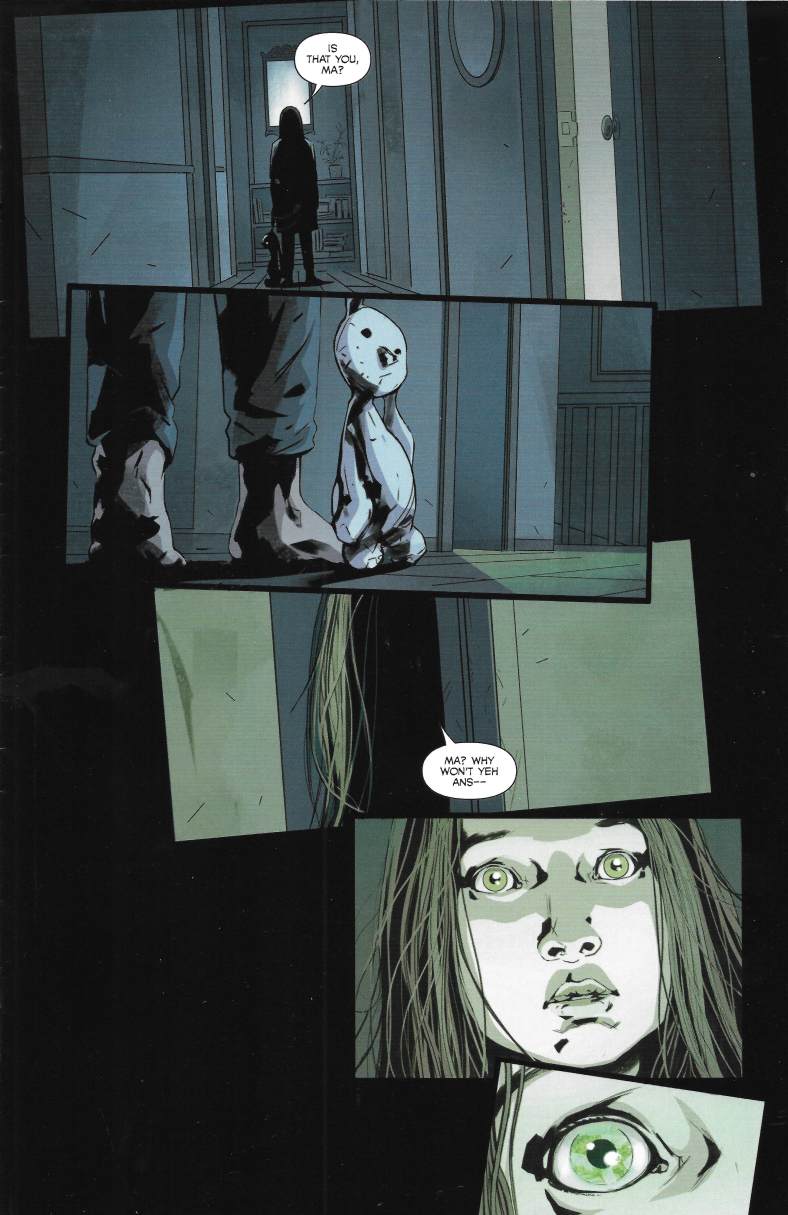 For perched over her Father is a being of nightmare that is stealing his soul. And if that visual doesn’t prick up your neck hairs, I don’t know what will. 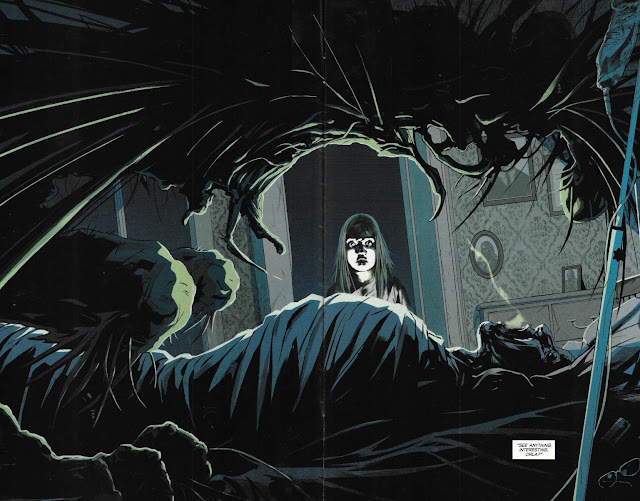 Skip ahead to Orla now, a troubled teen who is having a difficult time adjusting. She may finally be back on the road to normalcy. As we go along, we uncover that she’s prone to seeing things that others can’t see and that drawing those invisible creatures have earned her several trips to the therapist. Also the ire and ridicule of her classmates. I’ll show you how we find this out. First her literature teacher comes down on her for daydreaming out the classroom window and doodling. 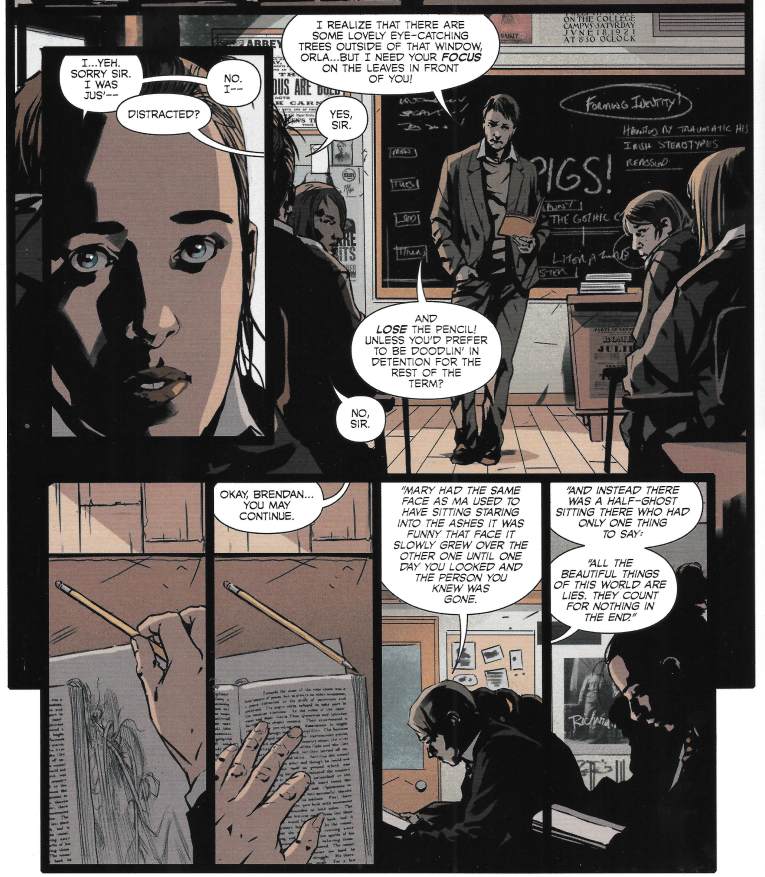 Then the other kids in class taunt her and call her names because she’s had such problems adjusting since her Dad’s death and the thing she saw. 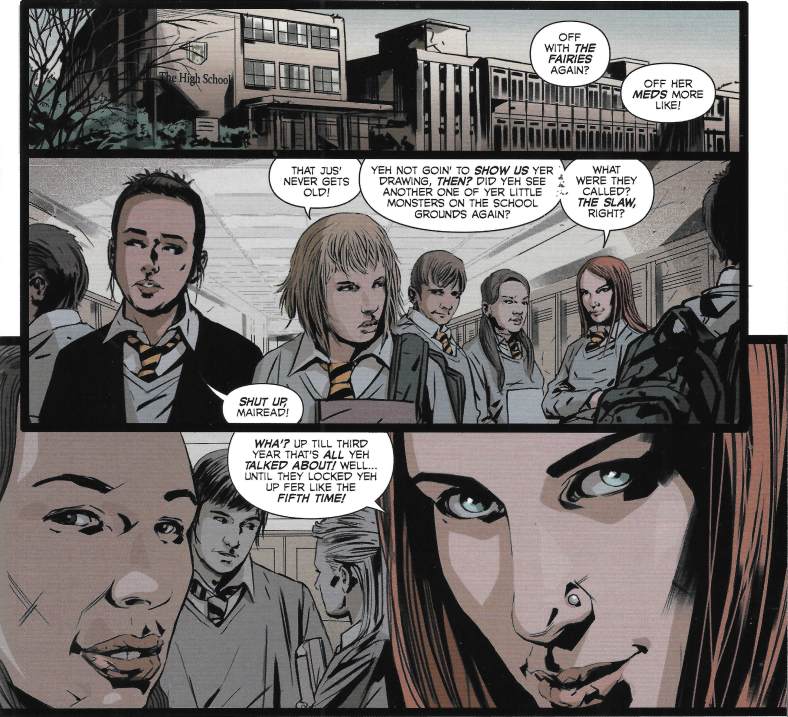 Her one friend tries to be there for her, but clearly even she has a problem with Orla seeing and drawing these creatures and sprites. 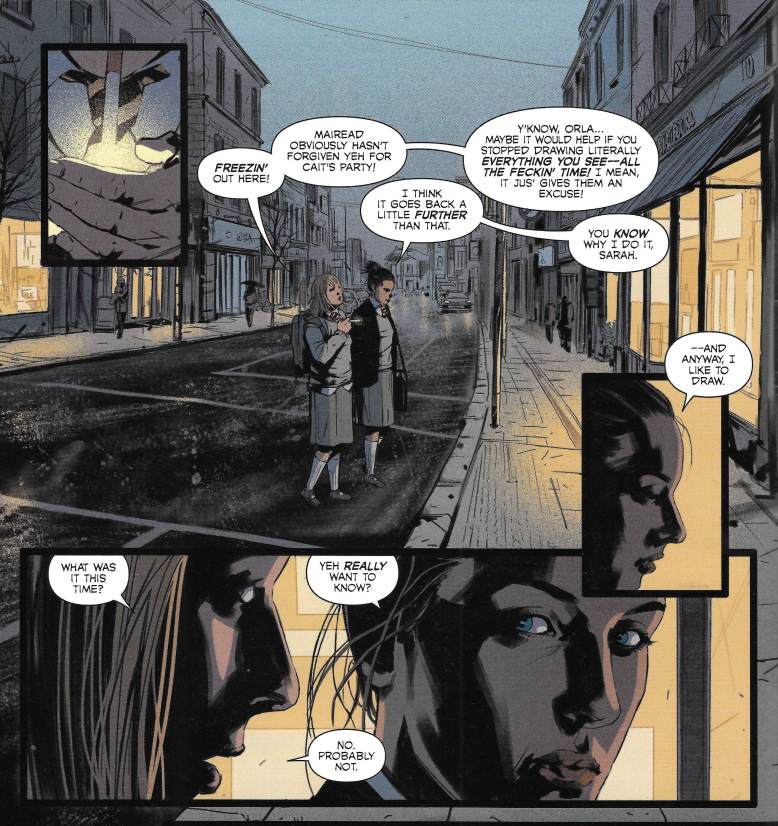 Meanwhile, Orla’s Mom and Grandmother try to deal with the upset of the anniversary of Orla’s Father’s death. 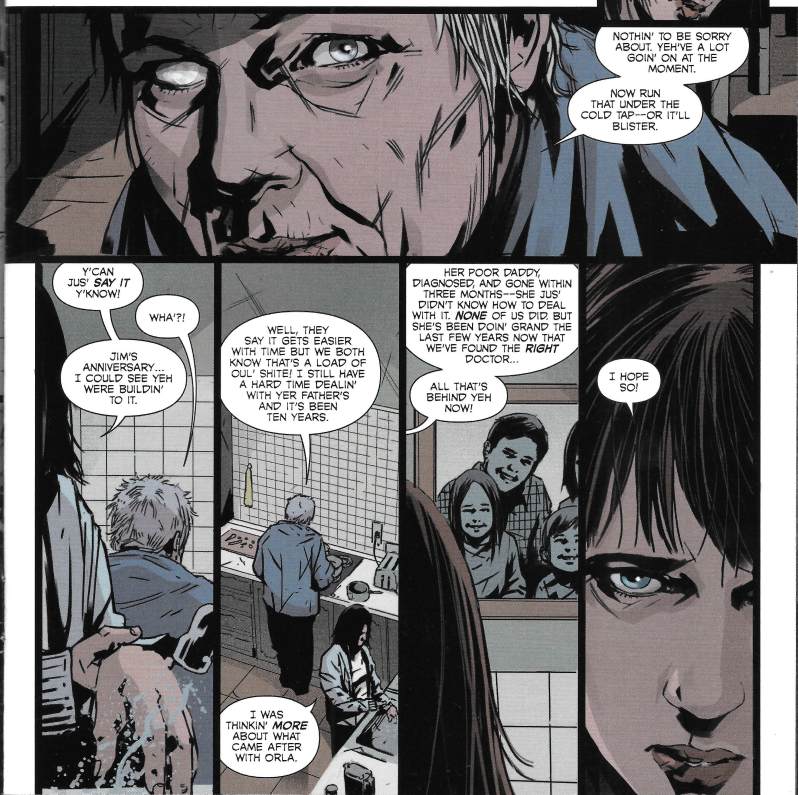 Their talk turns to how Orla spends most of her time out with friends instead of home with them. As Orla’s brother comes home from school showing pictures on his phone of a fight that broke out between two students, we move on to Orla and a male companion, possibly her boyfriend at a local coffee shop. 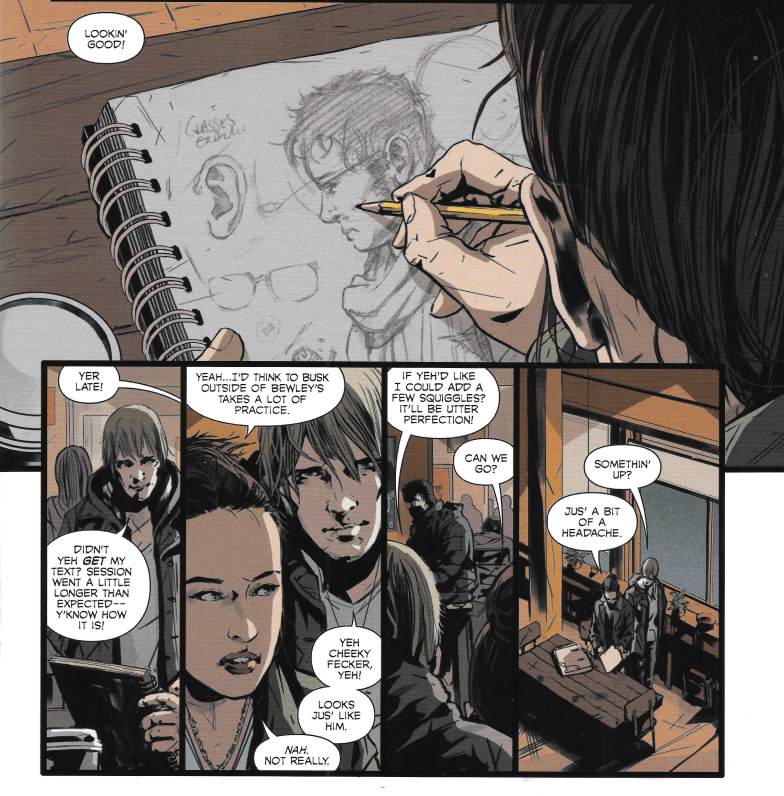 A man in a broken pair of glasses takes an unnatural interest in their leaving. 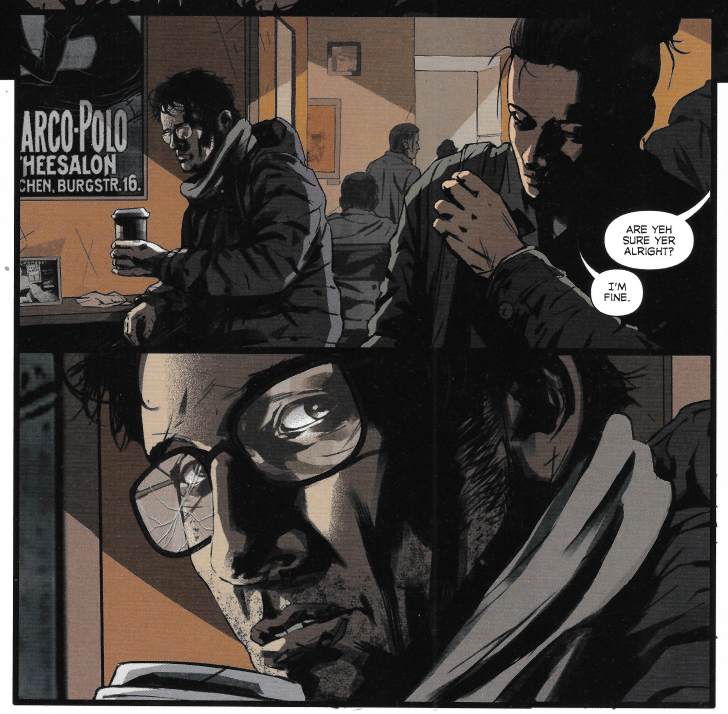 From there, they head to a friend’s flat for a gathering or party. Hard to tell which, but Orla isn’t really the social type. She excuses herself for the upstairs bathroom, and scrolls through the girl who insulted her’s social media feed. It is emotionally upsetting, as she has been picking on Orla for months over the trauma and emotional / psychological issues she had in the past. 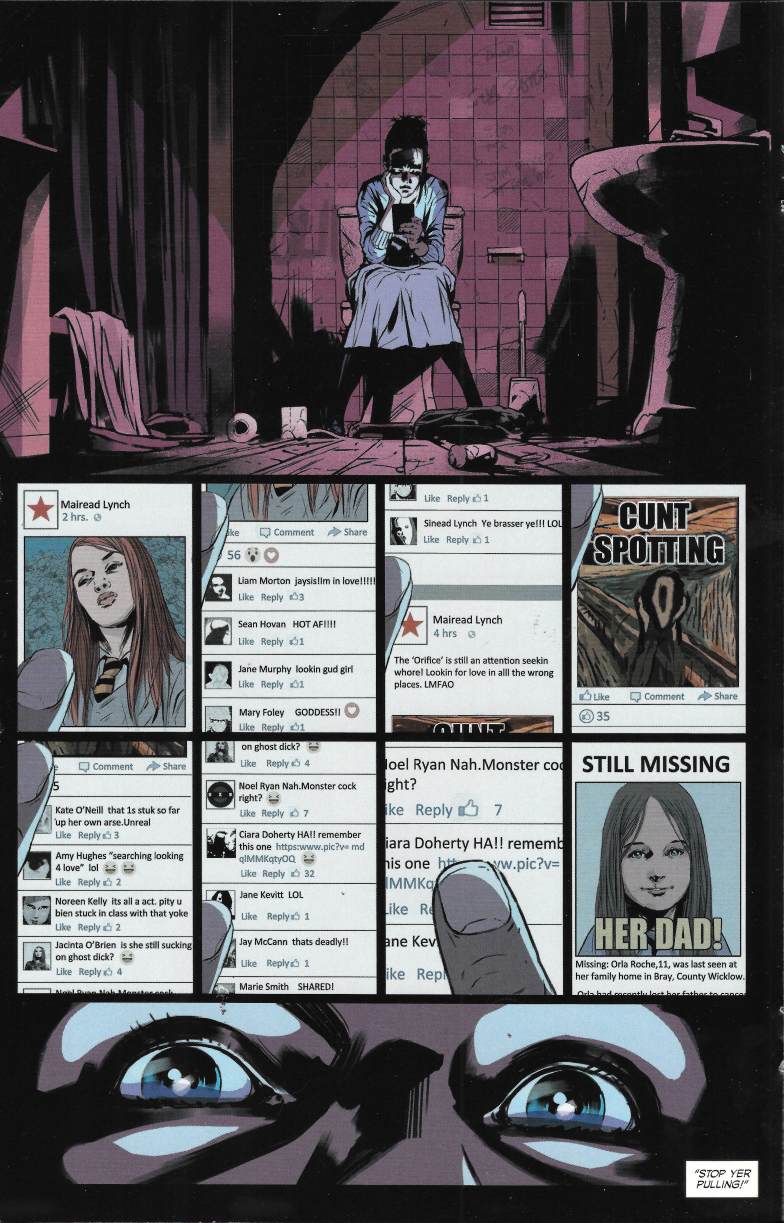 Apparently, Orla ran away from home at some point when she was younger. We have a brief flash back to that. 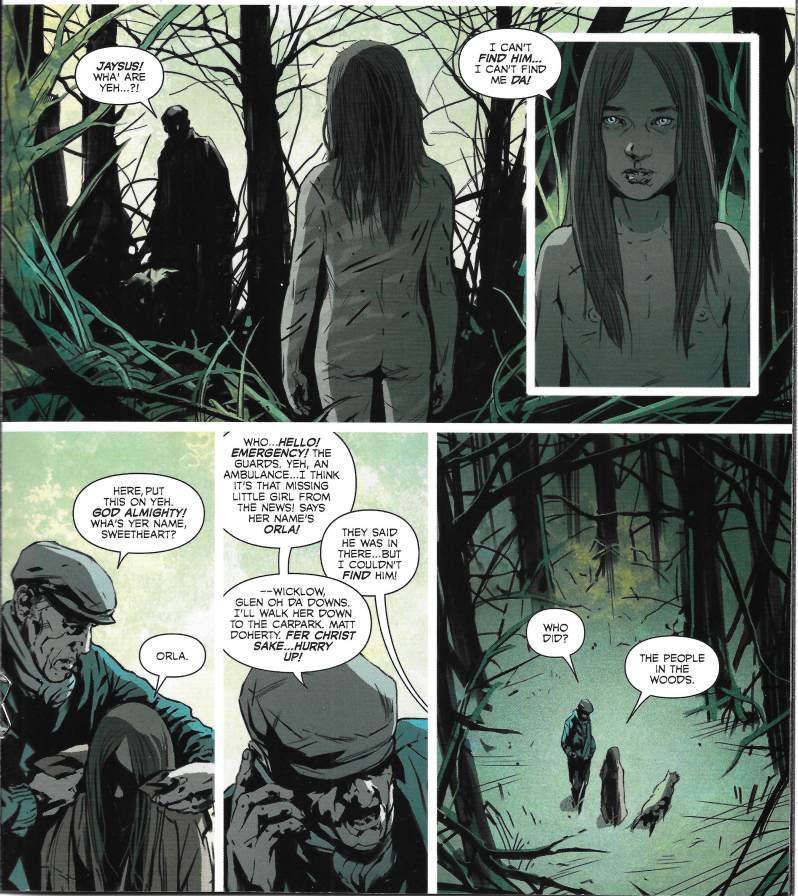 A neighbor finds they young Orla days later naked in the forest talking about seeing “people in the woods.” The chilling part is what she claims they are doing… 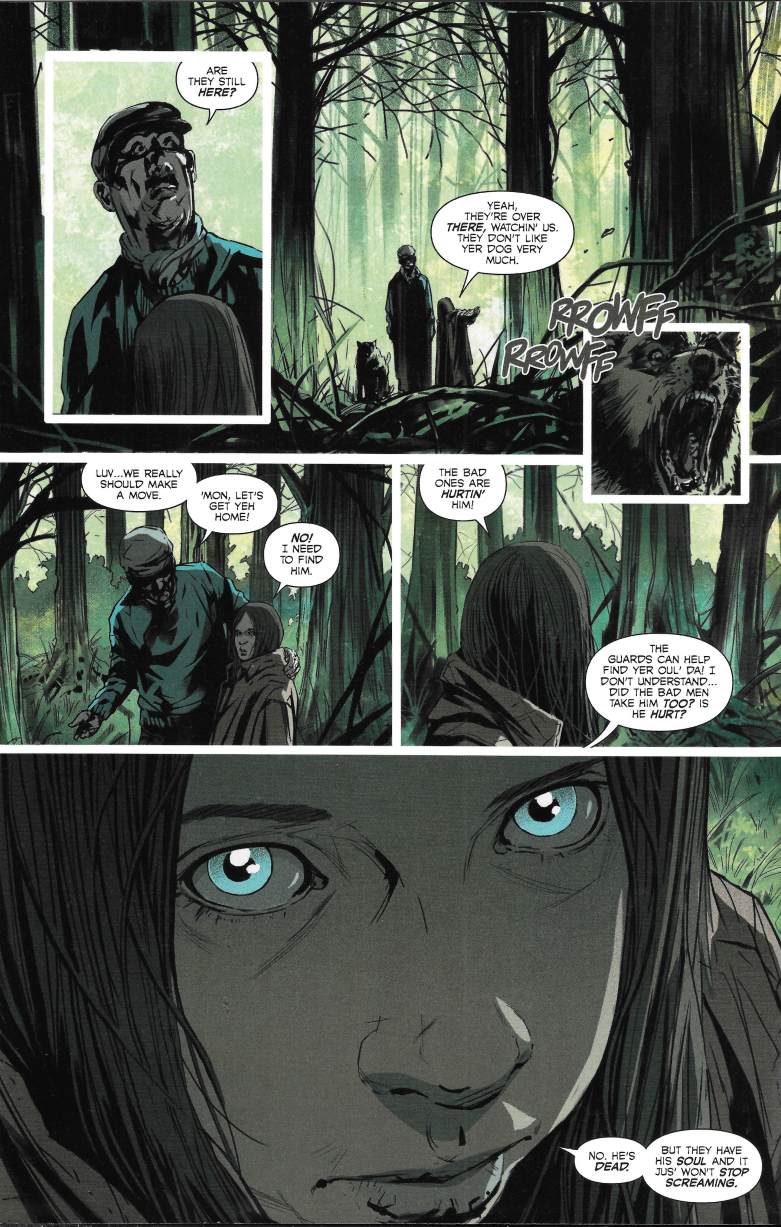 And then we are back at the party, back in the bathroom and the man from the coffee shop is staring at Orla while she’s in the loo. Only I’m not sure if he is a man or something…else. 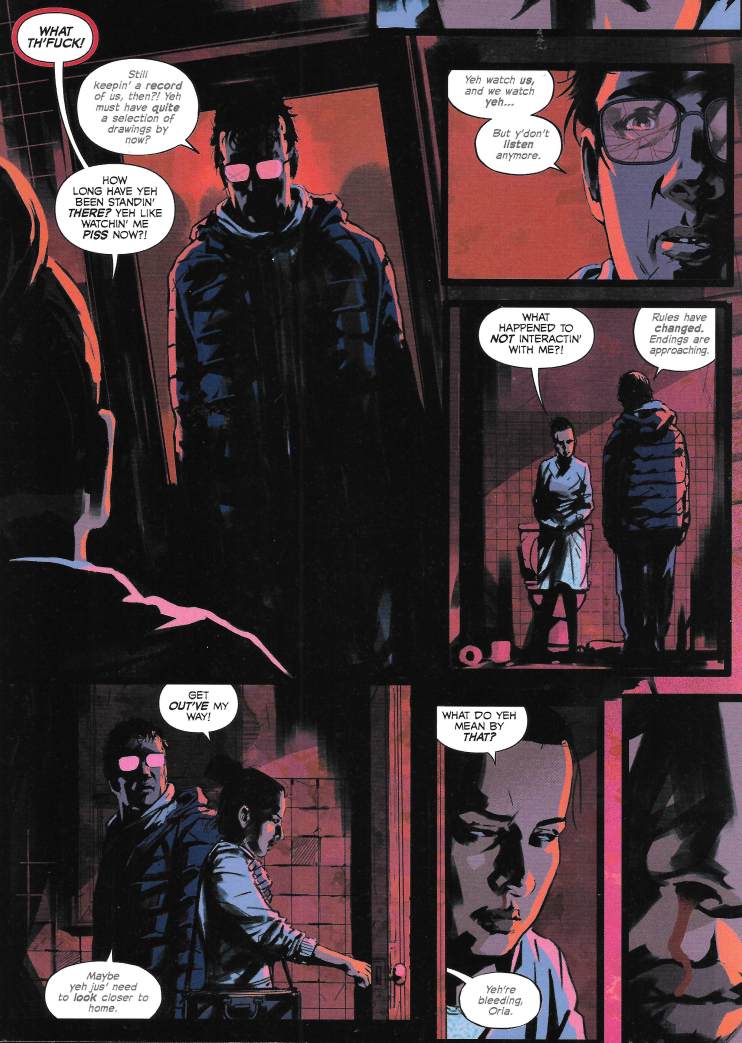 He states she has to “live up to her responsibilities” causing Orla to feel sick. She runs out into the street and pukes. Then she looks up into the sky… 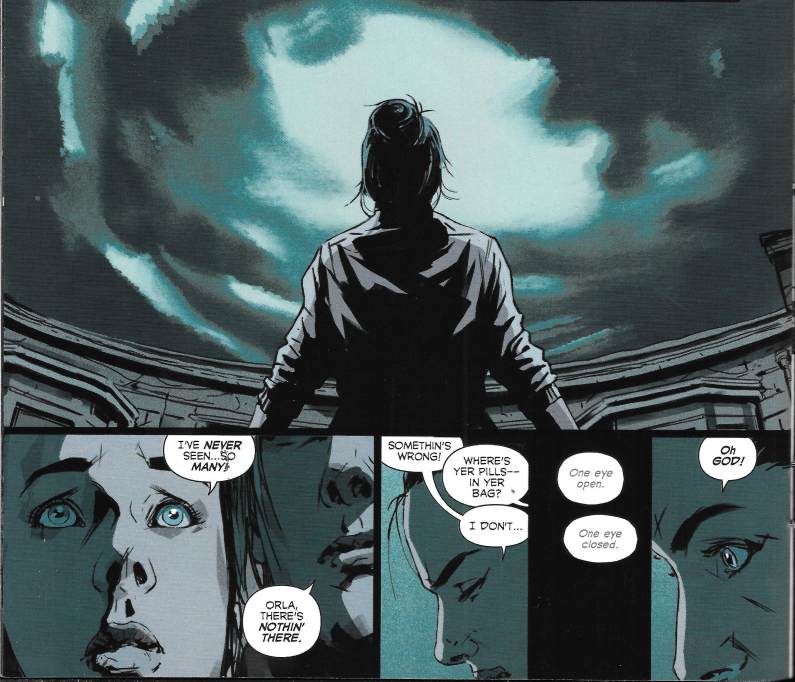 …and clearly something is wrong. Something is coming. And Orla is the only one that can see it.

And the vision she has refers to her Grandmother, who it seems could see the same visions Orla could, before she was blinded in one eye. The creatures can take human forms too, though. And two of them appear in her home and stab the poor woman. 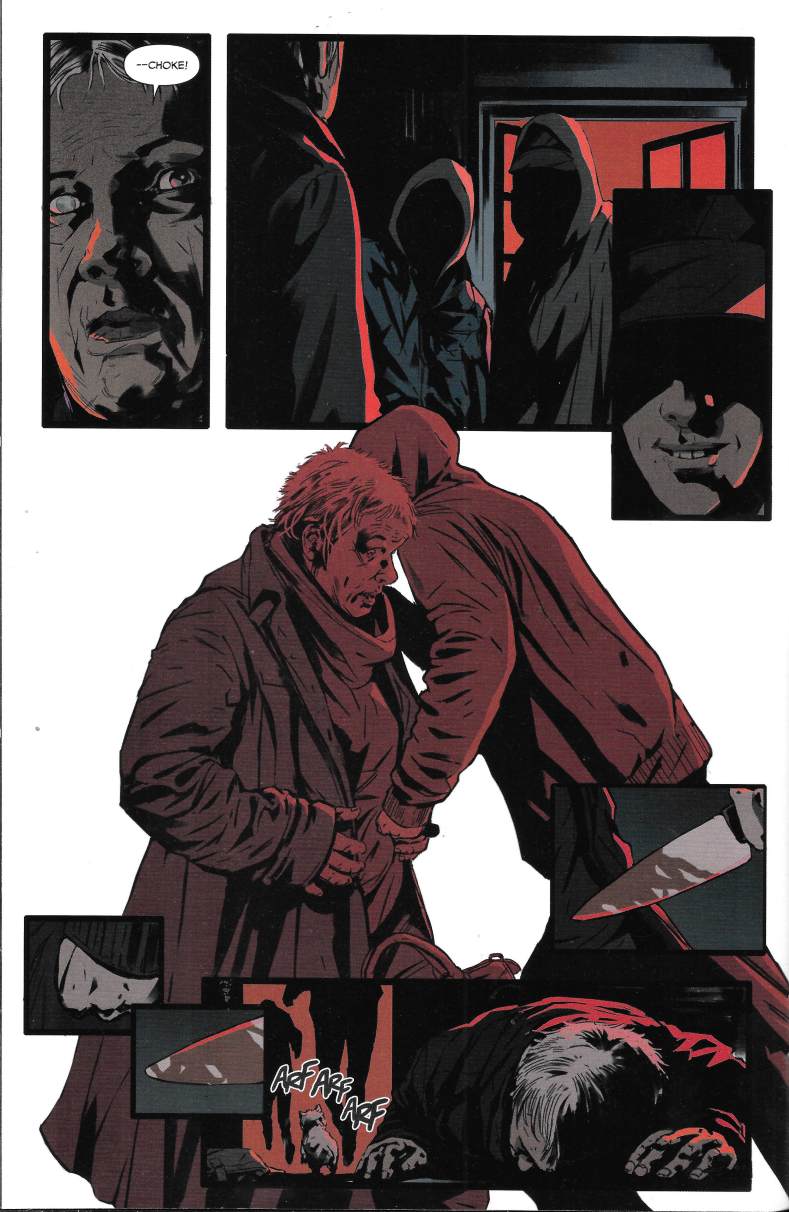 Wounded and possibly dying, she demands the spirit thing show itself… 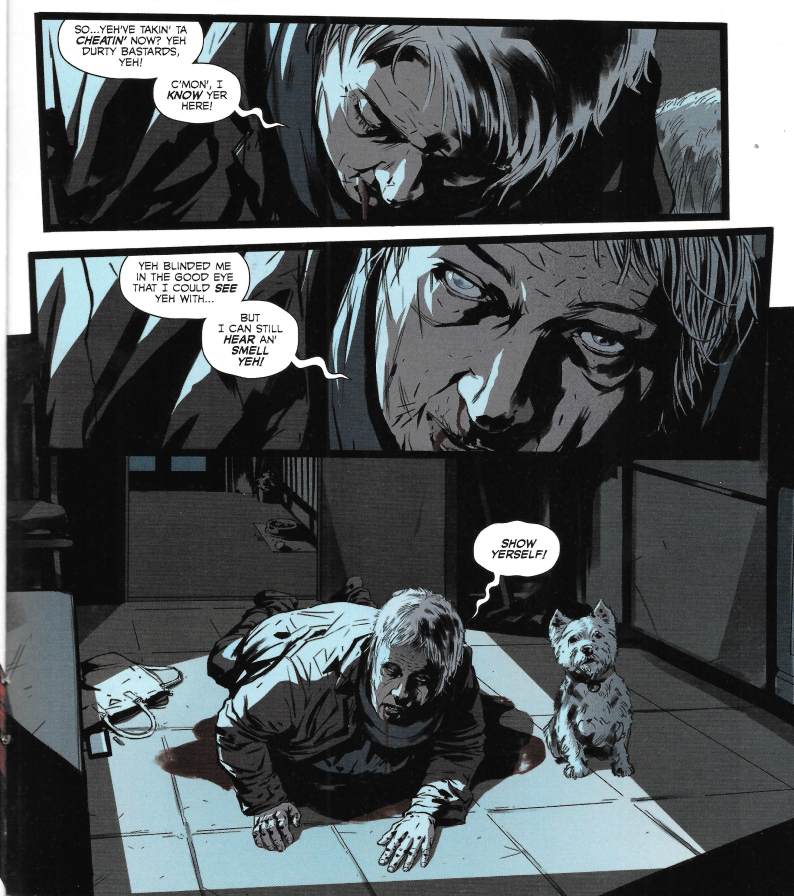 …and it does as we exit issue number one. 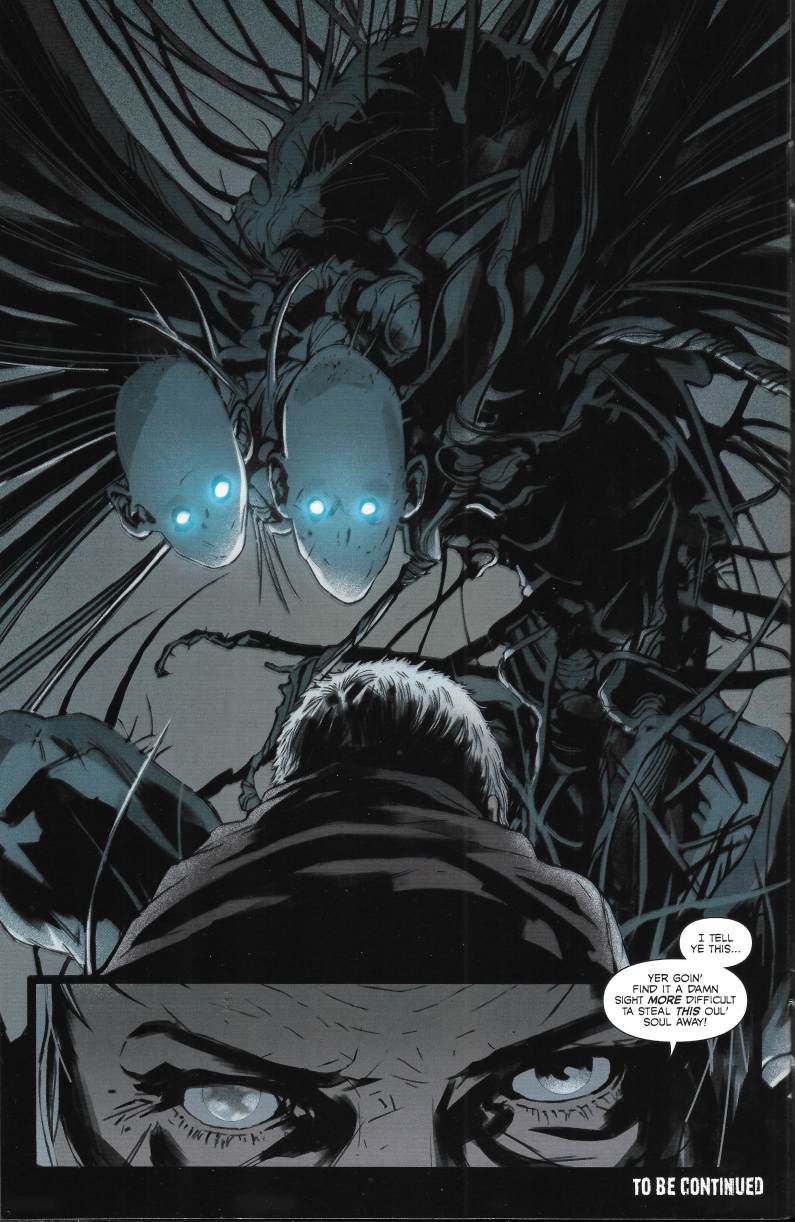 I really liked this issue. There was just enough clues to a tantalizing mystery of the creepy spirit beings to keep me interested, as well as great developed characters. I love the Irish dialect that is used to voice many of the cast, giving the book a dose of reality. Like it was a modern English horror tale of death fairies and the supernatural. If I found the other four for 50 cents each, it would be the best two dollars I’ve spent on comics in a long while.
Posted by SonOfCthulhu at 2:58 AM