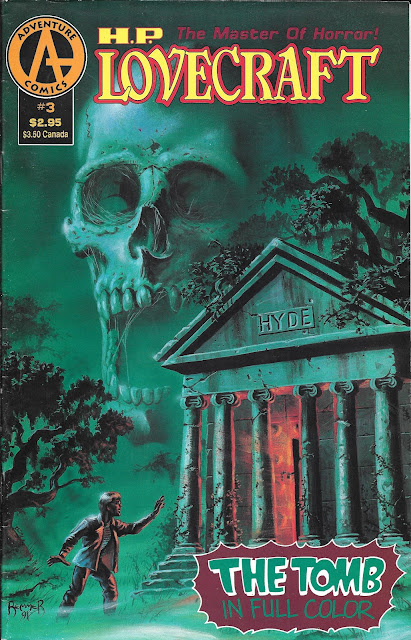 One of my least favorite tales turned into a middling comic

We move from bad Lovecraft-based comic to an actual Lovecraft story turned into a comic, albeit, not my favorite of his stories.

Lovecraft wrote The Tomb in June of 1917 and it saw publication in March five years later in the page of The Vagrant. Notable facts about it are that the Canadian musical group and sometimes roleplaying game makers “The Darkest of the Hillside Thickets” take their name from a passage in this story. That alone gives the story worth in my estimation, as I quite enjoy a Thickets ditty, now and again. Also, there was a 2007 movie called HP Lovecraft’s The Tomb that had nothing whatsoever to do with this save the story title and that it contained a tomb. Sort of like most HP Lovecraft movies.
This adaptation also takes liberties, to the point of reordering the events of the story in such a way as to mute the sharp point of the story’s twist to the bluntness of a broom handle. Rather than spoil how they are different all the way through, I will instead implore you to go read the actual text, provided by the wonder of computers and the expiration of copywrite.
Or alternately you can go HERE and listen as the Thickets read the story.
The story itself is quite short and the audio plays for about 25 minutes in the retelling. When you are done, return here and we can discuss what exactly makes this version flawed.

Back? Good. Shall we begin?

We open in the nuthouse, although the artist of the book has seen fit to render it using an image of a European church with a crudely drawn chain link fence topped in barbed wire drawn in front. To make this image more silly, our colorist has seen fit to coat the entire structure in pink cotton candy and to decide we need blue snow and blue sky. 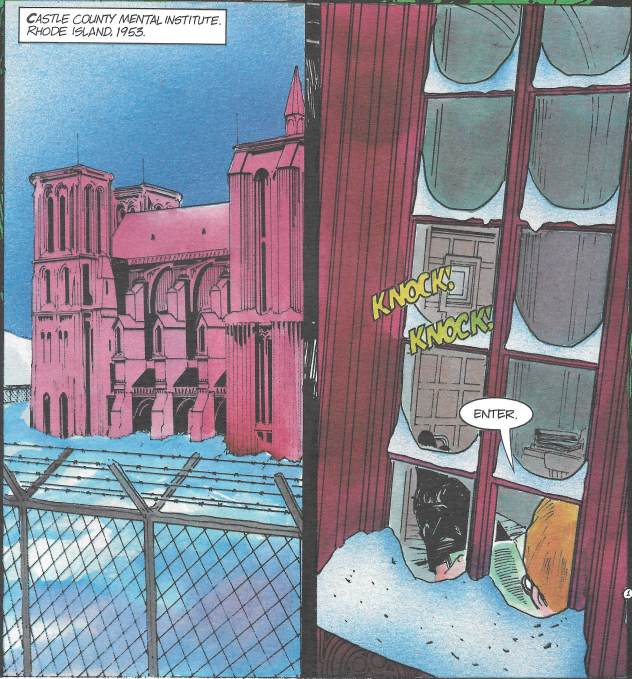 Gone is the thing about this opening that makes Lovecraft great, his foreboding voice-over that heralds our decent into his realm where the universe cares little of how fragile human psyches are, replaced only with a location blurb.

So page one and we know these people have no idea what makes Lovecraft special and they have already done as much as one can to distance themselves from his writing style and tone.

Why put his name on the outside of the book then?

As in the story Jervas is already institutionalized upon our opening, and what we don’t get in Lovecraftian prose, we get a page worth of doctor-patient small-talk. All of which seems geared to show is that Jervas is well read and seems quite sane, even though his family believes him unbalanced.

Both the figures and the backgrounds are drawn with a sophomoric ineptitude and the color pallet used contains bright pinks and lime greens set on drab grays, browns, and blacks, almost daring the book to be anything other than a horror story. It’s a mess visually, distracting and unappealing. There is not a stitch to any of these panels that gives you unease except the awkward angles attributed to human figures. Look at this shot of Jervas from the back to see what I mean.

And to prove they don’t understand the reason elements of the story are placed in a certain order, here they throw in the statue from the tail end of the story that implies the twist that Jervas is actually a resurrected member or reincarnation of Jervas Hyde, the name borne by the tomb he visits. So, good going on spoiling things, Jones and Cariello! 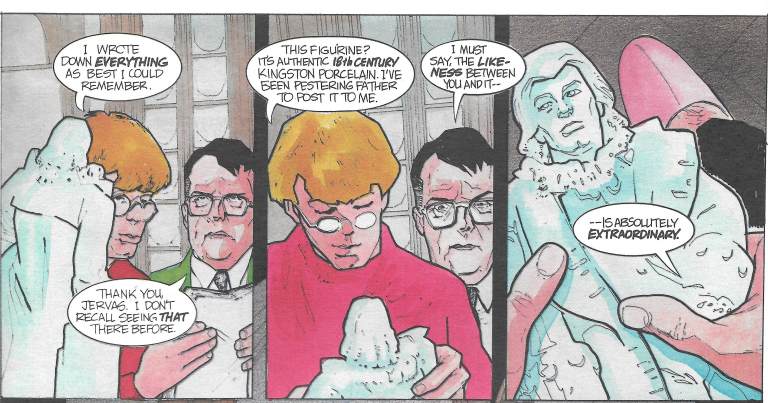 This is why I dislike when Hollywood or others take it upon themselves to “interpret” HPL’s works. Far too often they have little study in what makes them good tales in the first place.

Now that we know far too much about the ending reveal, we are forced to sit through the “how we got here” part of the story with little worry over what the final destination will be. The doctor reads again the notes of Jervas’s childhood and how he liked to hang around in nature and think of spirits and ghosts. 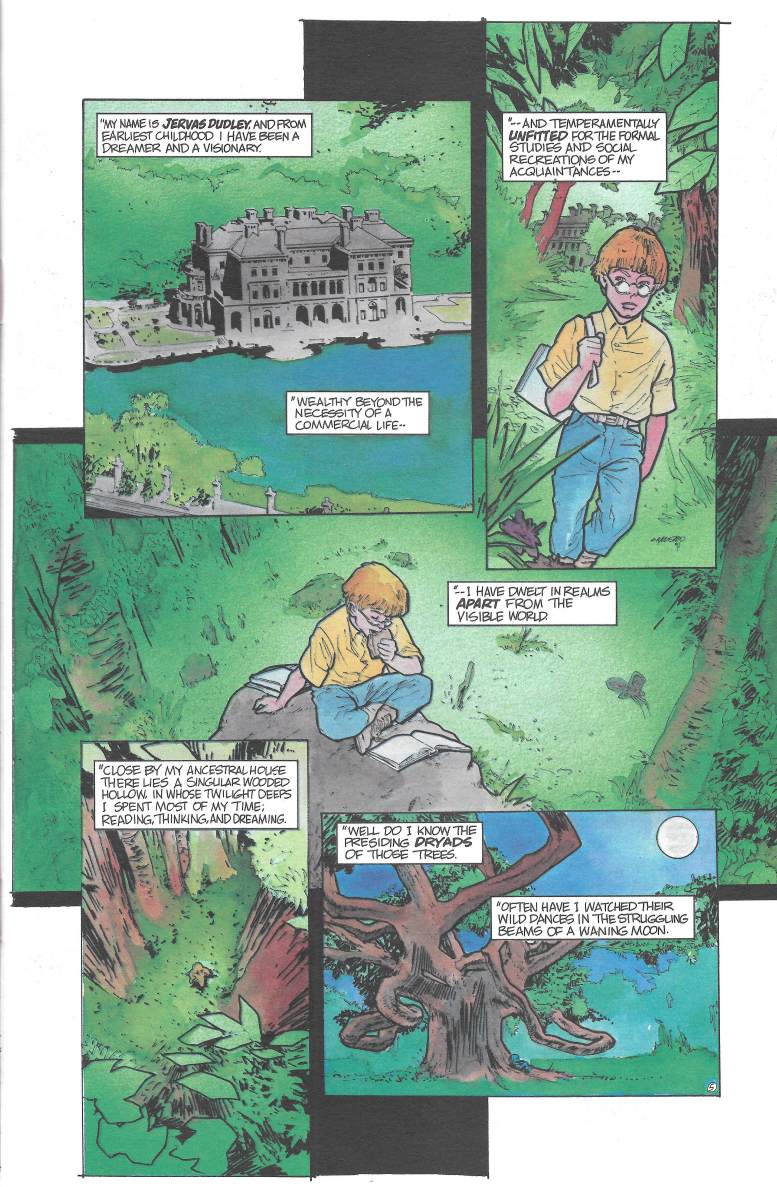 Yes, one of the few places where we have Lovecraft doing the writing and it is passages of exposition that, while better than the rest of the added writings to this story, are not the better parts of HPL’s tale.

And then the boy happens upon a mausoleum on the property, hidden by overgrown vegetation that has the name Hyde upon it. The doors are ajar, but held too close to squeeze through by a chain and rusty padlock. Jervas is curious about its contents but cannot find a way inside. 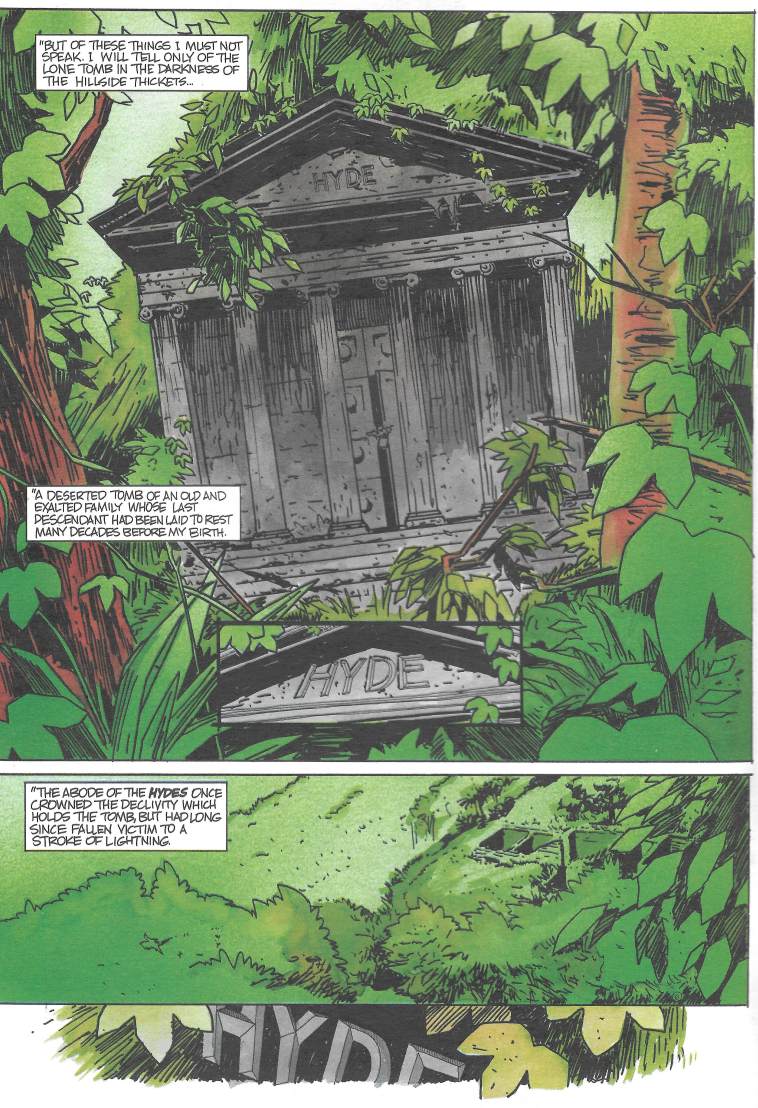 In a bit of foreshadowing, the boy finds a book that portents that when he reaches the correct age, he will discover his destiny. 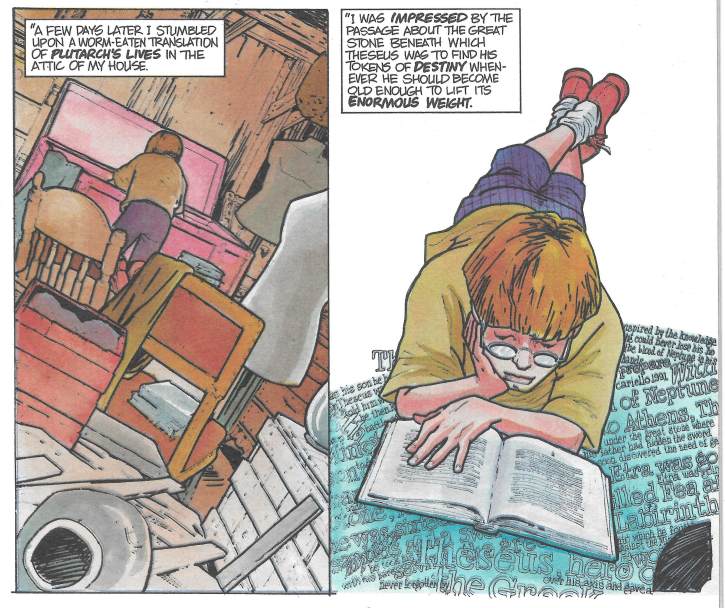 Then things get kind of weird for the kid. He starts sleeping in the graveyard and awakening with knowledge of the dead. And by that I mean knowledge that only dead would know if they were still conscious of the goings on around them AFTER they died. 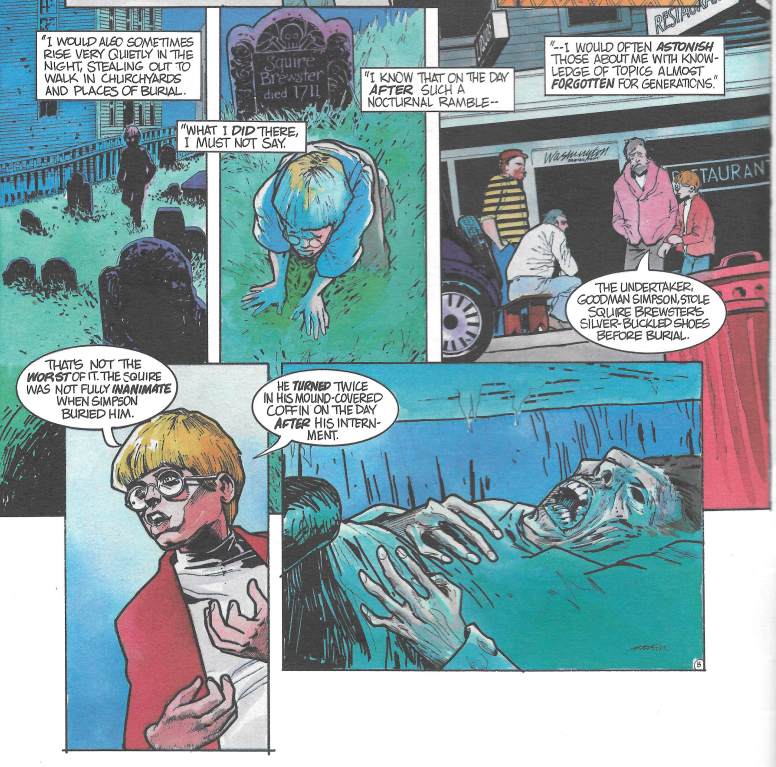 Yeah, Jervas was the creepy little kid in the neighborhood.

Then we continue on to “Chapter 2” (the original story has no chapters) where we get a recap of the end of “Chapter 1” in the form of exposition as the doctor reads over his notes. It feels like pad and again I am confronted with the idea of what a wasted opportunity this is so far. If the person doing the adaptation is going to alter the story anyway, why not at least make it to where we spend all this time in Jervas’s head. At least then we would form an emotional investment in his outcome. Spending time watching the doctor do his job is both boring and does little to form an attachment with the person we need to care about if the ending is to have any impact. 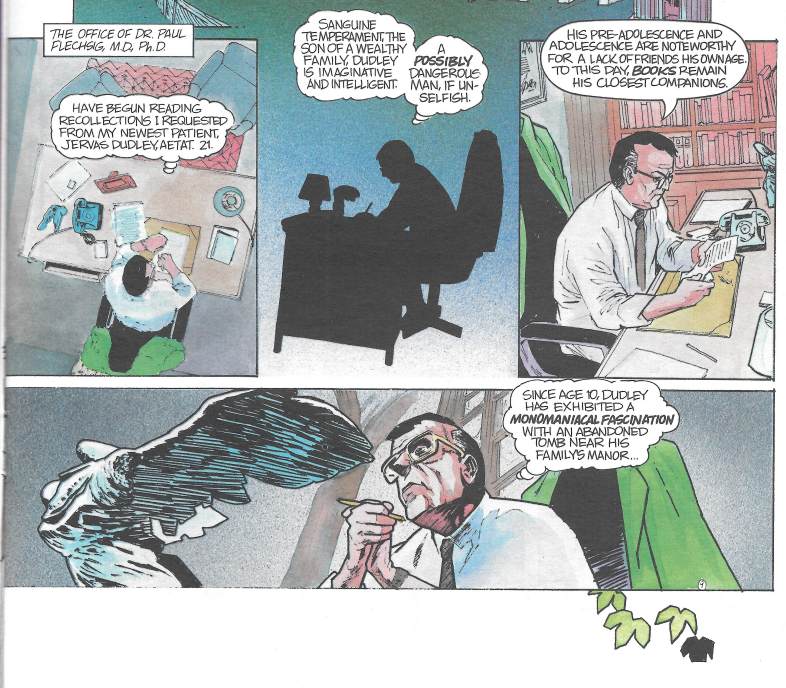 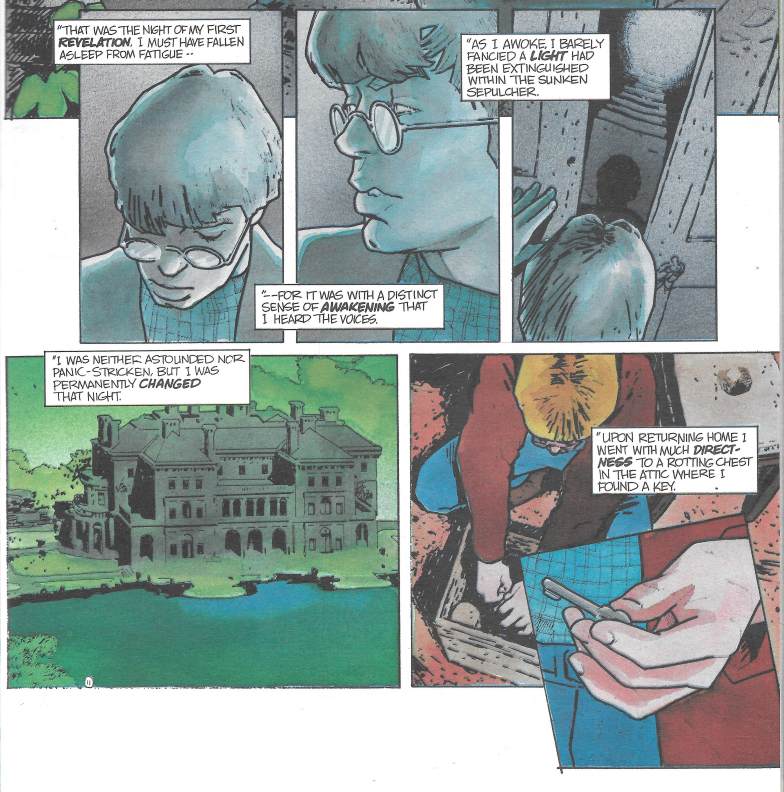 …and he wanders down the steps to where the bodies lay… …where he finds an empty casket that is not too hard and not too soft, but is JUST right. So, he takes to sleeping there. 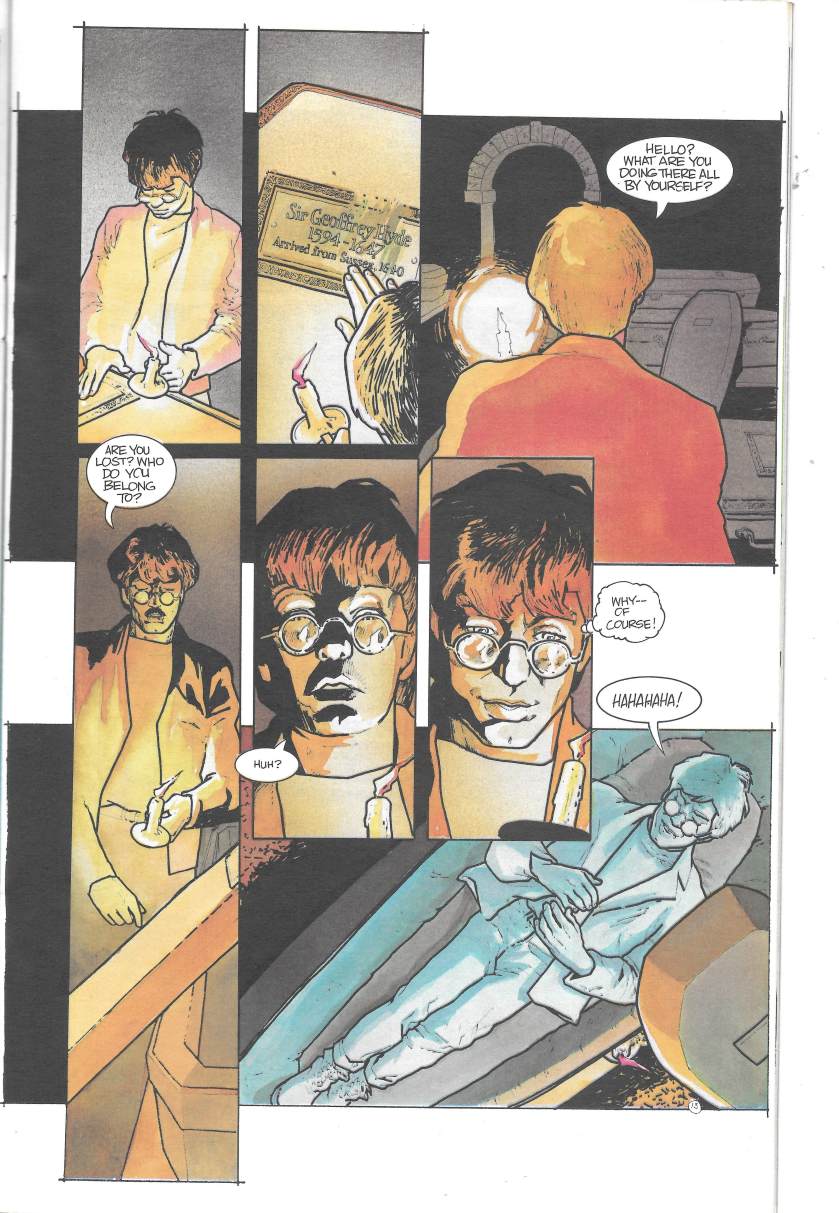 His parents notice both his love of sleeping outside somewhere and his new aversion to lightning and thunderstorms. 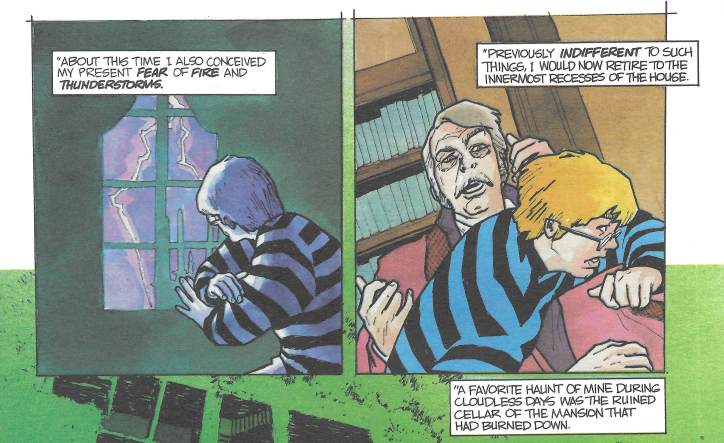 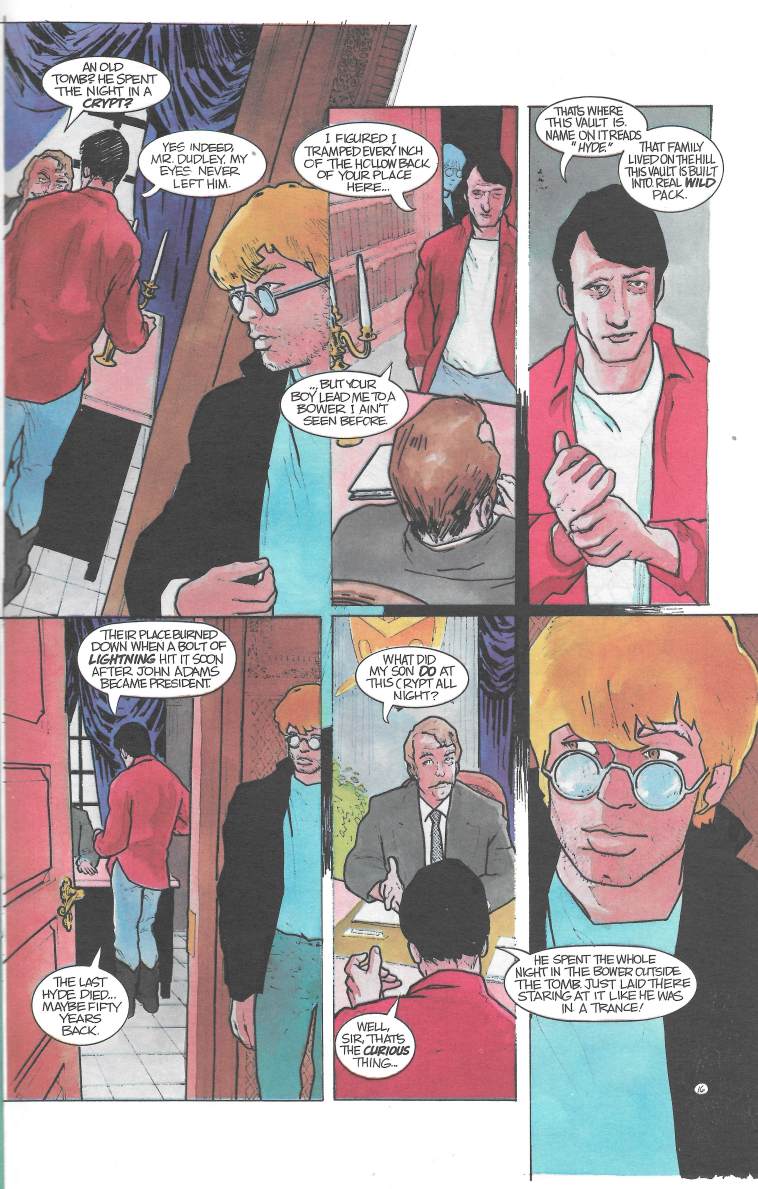 …never enters the tomb at all, even though Jervas thinks he does.

Then a long sequence between Jervas and his doctor that is boring and can be summed up in “Jervas says he is related to the Hydes and the doctor says he is putting stray thoughts together in an illogical way.” And unlike the original HPL story, I feel inclined to believe this assessment. 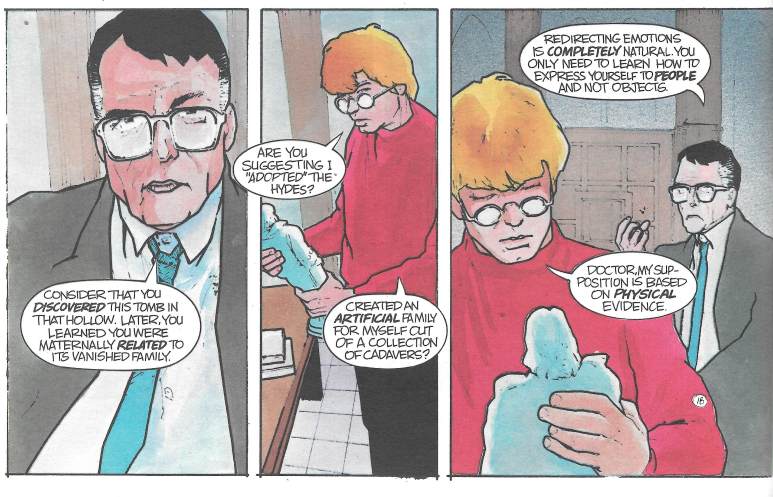 He recounts for the doctor the last dream he had, where he imagines himself back in colonial times where he was at one of the neon glow raves that they had back then when all of a sudden lightning struck the DJ turntables… 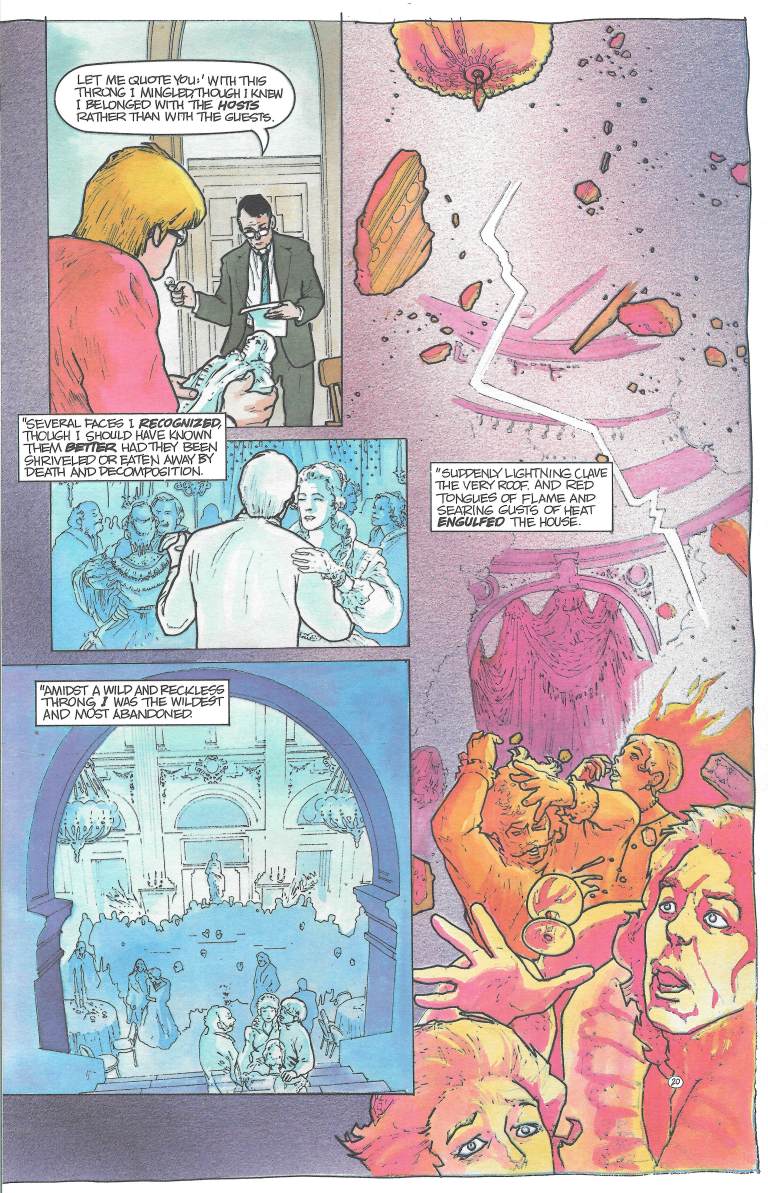 …and set the entire mosh pit on fire. 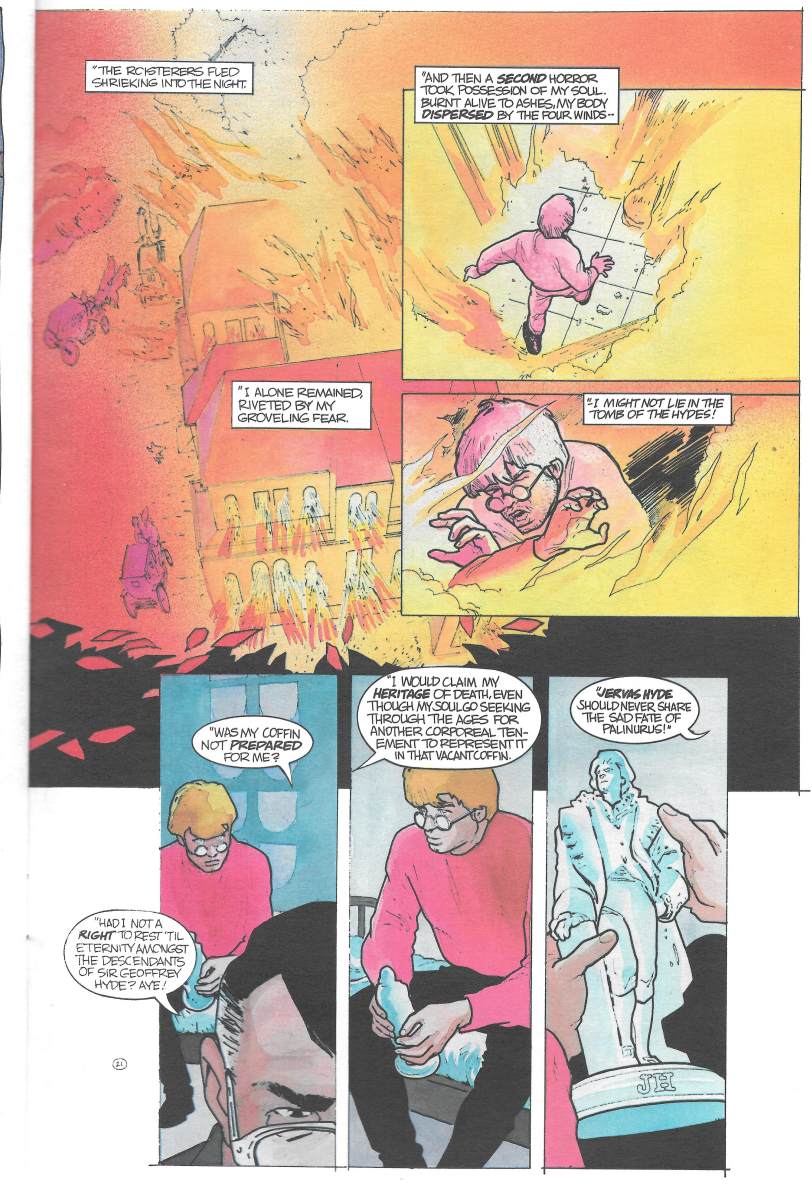 Or something like that. It’s hard to tell through all those bright colors what the pictures represent.

Anyway, he burned to death and only this little statue of him remained. 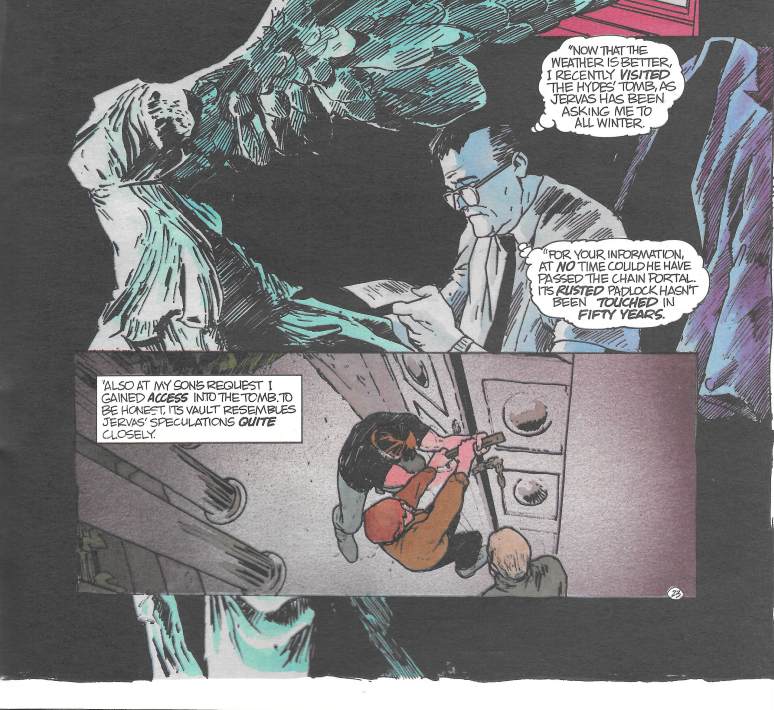 The doctor seeks to prove that Jervas is full of cow-plop, so he breaks into the Hyde tomb… 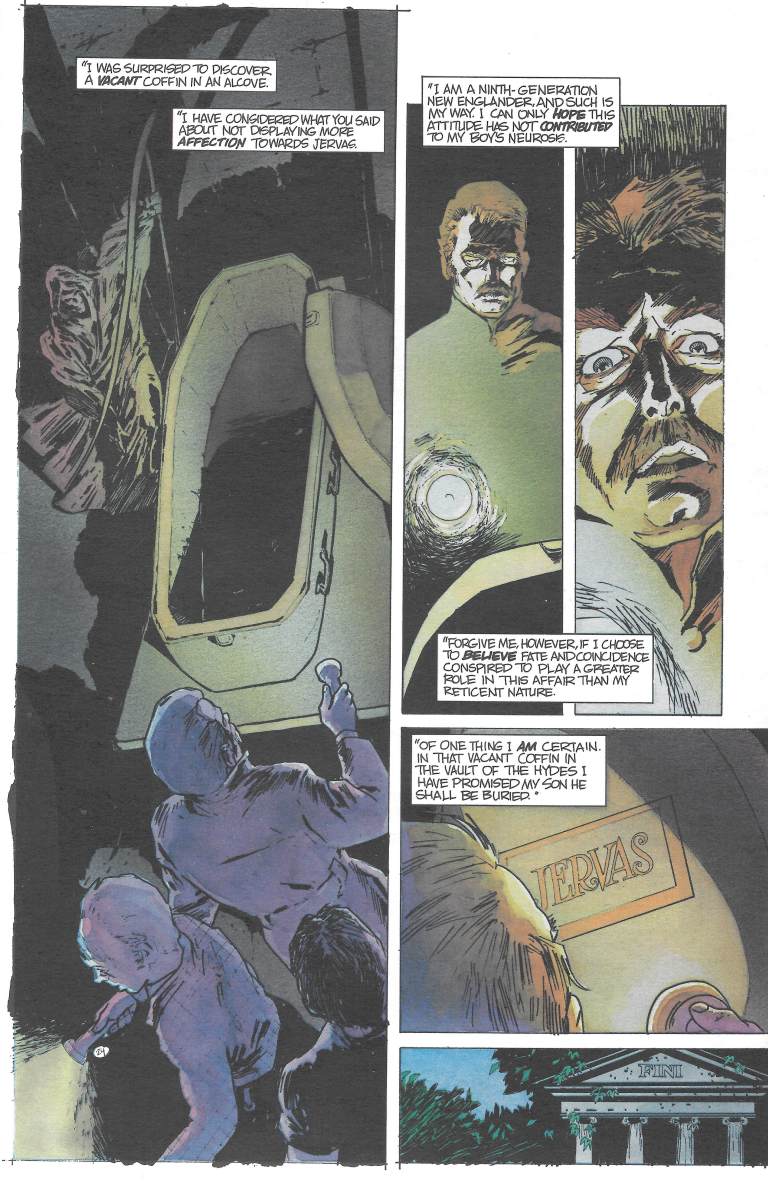 …and finds the empty crypt just like Jervas described it. Oh, how scary. The end.

The best part about the story is that it’s over. I’m not a huge fan of The Tomb, feeling there are MANY better Lovecraft tales to start out on, but this interpretation robs so much of the power in its ending. The issue is that there is little for a writer to do with the work that will make it “better”. Certainly adding the character of Jervas’ doctor took the focus off the main protagonist, making this all about the doctor's struggle to cure him, not about Jervas' need to understand himself. There could have been several scenes using the original storyline where the art might have created the eerie feel of Lovecraft’s turn of phrase. I fault both equally.

We are lucky that coming up we have a book of HPL adaptations that does Lovecraft proud, both in art and in writing.
Posted by SonOfCthulhu at 2:41 AM