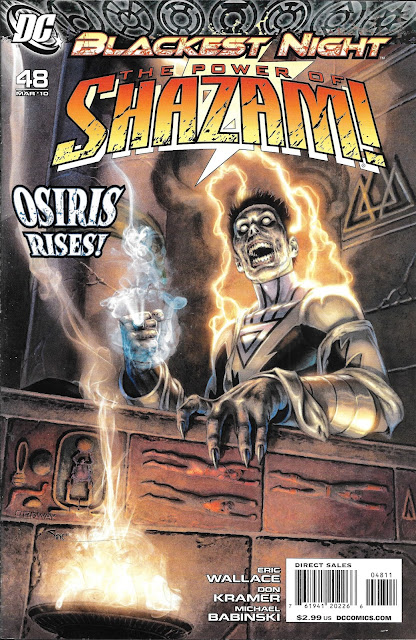 Blackest Night resurrects someone it shouldn’t

The DC event “Blackest Night” was one of the last comics I collected new. I enjoyed the storyline and have a positive impression of it as a whole, but things had just gotten too expensive for an old dog like me. So out I jumped, leaving the promise of “Brightest Day” to other, richer comic book buyers.

Blackest Night centered around the Green Lantern Corps, specifically the villain Black Hand. Appears the Guardians of the Universe, those little blue power Smurfs, had created MANY colored Lantern Corps, each with their own ring and power emotion. They did this to eventually battle the Black Lanterns, a legion of undead warriors who rose from the grave after being selected by black power rings.

Black Hand was the first recruit, but every hero who had died and any villain buried were likely to become a convert as well. The Black Lanterns didn’t use power beams, but instead had all their powers they had when alive and used them to try and kill anyone in their way. The implication was that the Black Lanterns wanted to exterminate all life in the universe.

It was kind of a great story in that it explained how so many heroes had been brought back from the dead, and by the end, brought back many who were recently deceased. Sadly, Ted Kord, the second Blue Beetle, wasn’t among them.

In plucking through bins and bundles, quite a few Blackest Night books have shown up in the Crapbox. Out of that pile of also-rans only one fit what I was looking for this time around, although I’m sure the others will make appearances eventually.

This slim one-shot from the resurrected “The Power of Shazam!” series was my choice. DC played this game where they took titles that were cancelled in recent years and added a new “one-shot” issue for Blackest Night, continuing the numbering from the series like nothing had happened. It was a fun little trick. I bought most of them and the Crapbox had proved second copies of nearly all of them.

Our issue is The Power of Shazam! However, and we begin with a rehash of the HIGHLY (like top-of-the-pile highly) recommended 52 series section on events surrounding Black Adam in the DC regions of Cairo and Kahndaq. Specifically, for the young man known as Amon Tomaz.

We join Amon after a black panel that states “Target Locked”. Amon was “recruited” by Intergang, and by that I mean he was kidnapped and brutally tortured until he either joined them or was crippled. 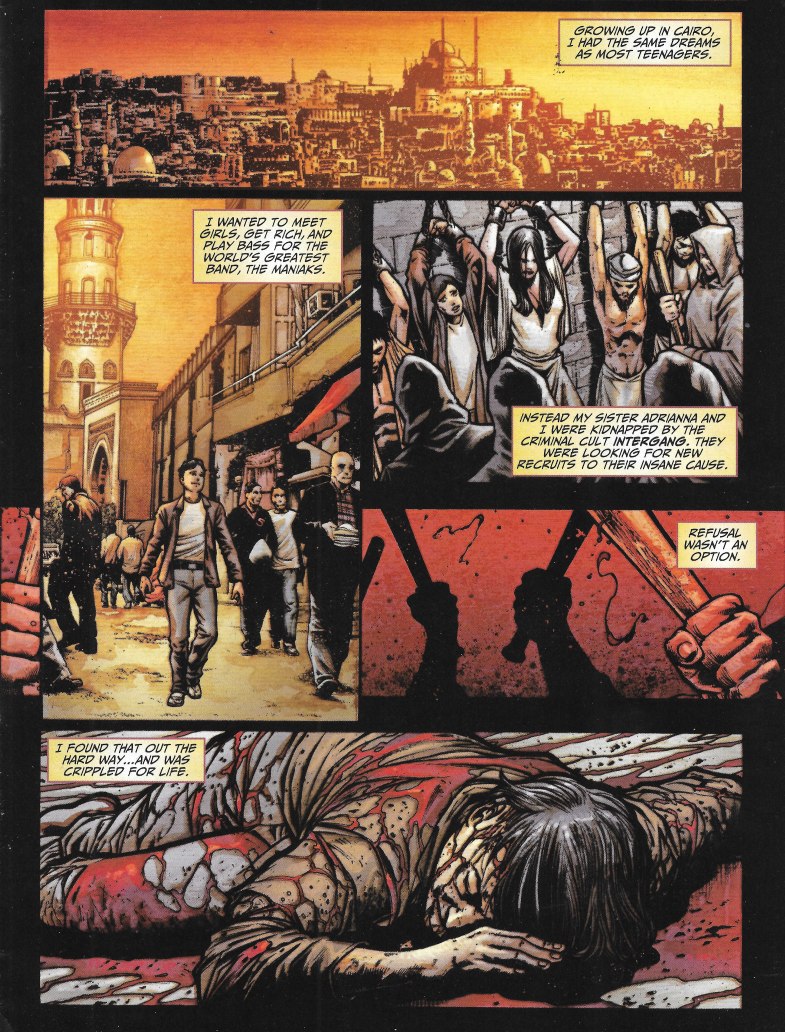 Amon’s resolve held out longer than his body, and the Intergang criminals left him unable to walk after severely beating him. But living the rest of his life disabled was not to be. Black Adam had shared his power with Amon’s sister Adrianna, turning her into Isis, a superheroine of great power. He did likewise for Amon, granting him the power as Osiris. 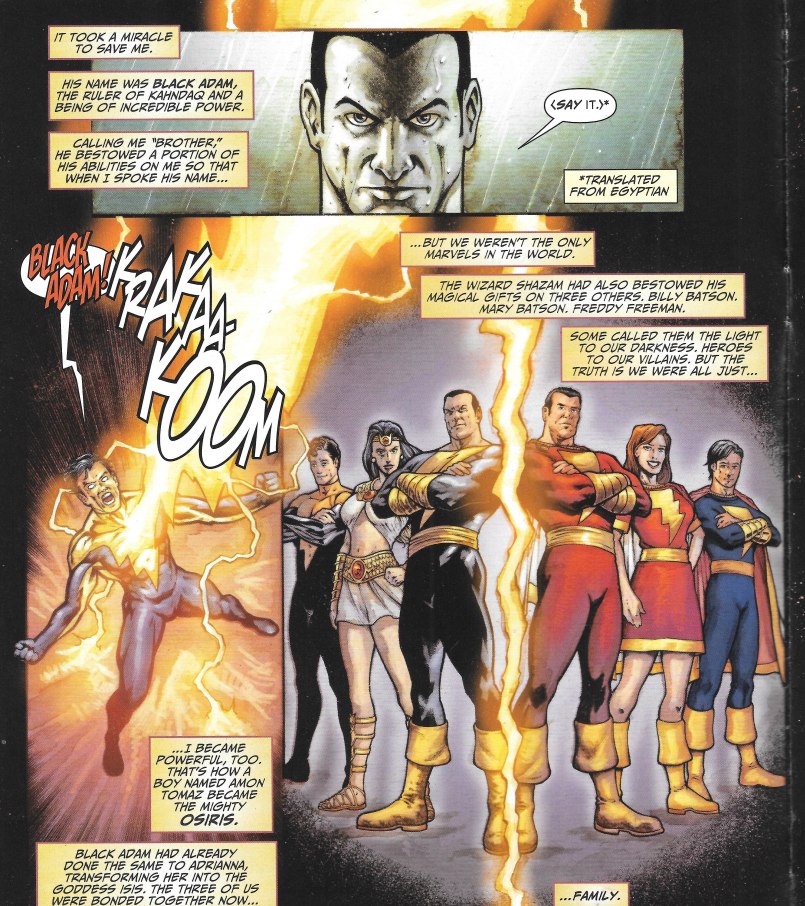 Unfortunately, the events in 52 took a turn for the worse as Osiris accidentally kills a criminal, and the guilt of that action eats away at him. Sobek, the talking alligator who joined the Black Adam Family to continue the analogue of Tawny the Talking Tiger in the Marvel Family convinces Osiris to transform back into Amon and run away with him. Little did Osiris know that Sobek is actually Famine of the Four Horsemen of Apokolips, one of Darkseid’s minions.

Turning back to a human doesn’t go well for Amon. 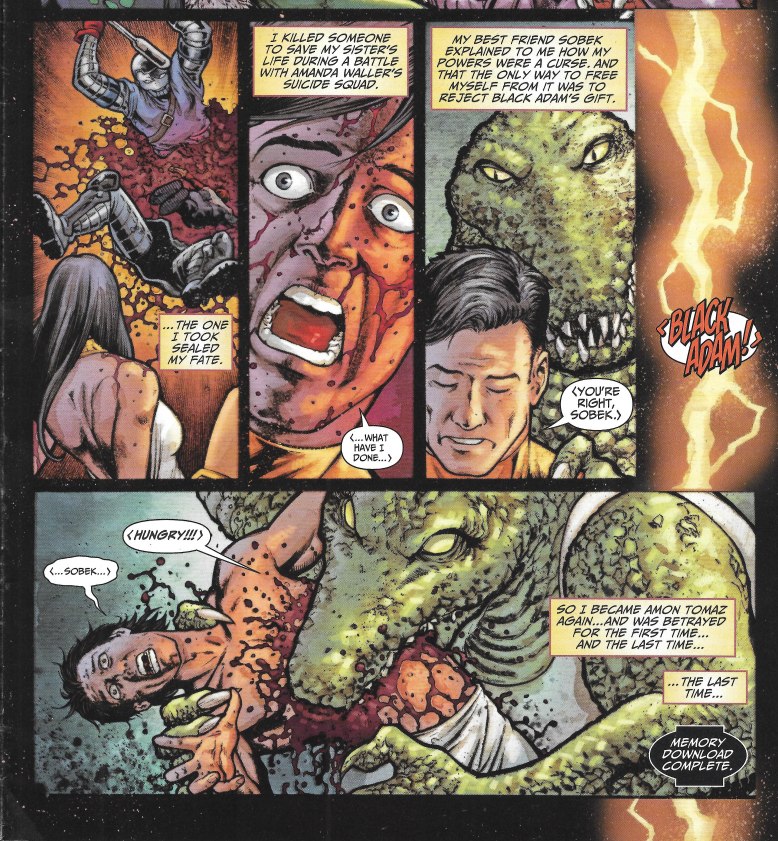 Black Adam buries him in a place of honor in Kahndaq, but not before killing Sobek too. Which leads us to where our tale starts: the tomb of Osiris, present day, soon to be unoccupied. 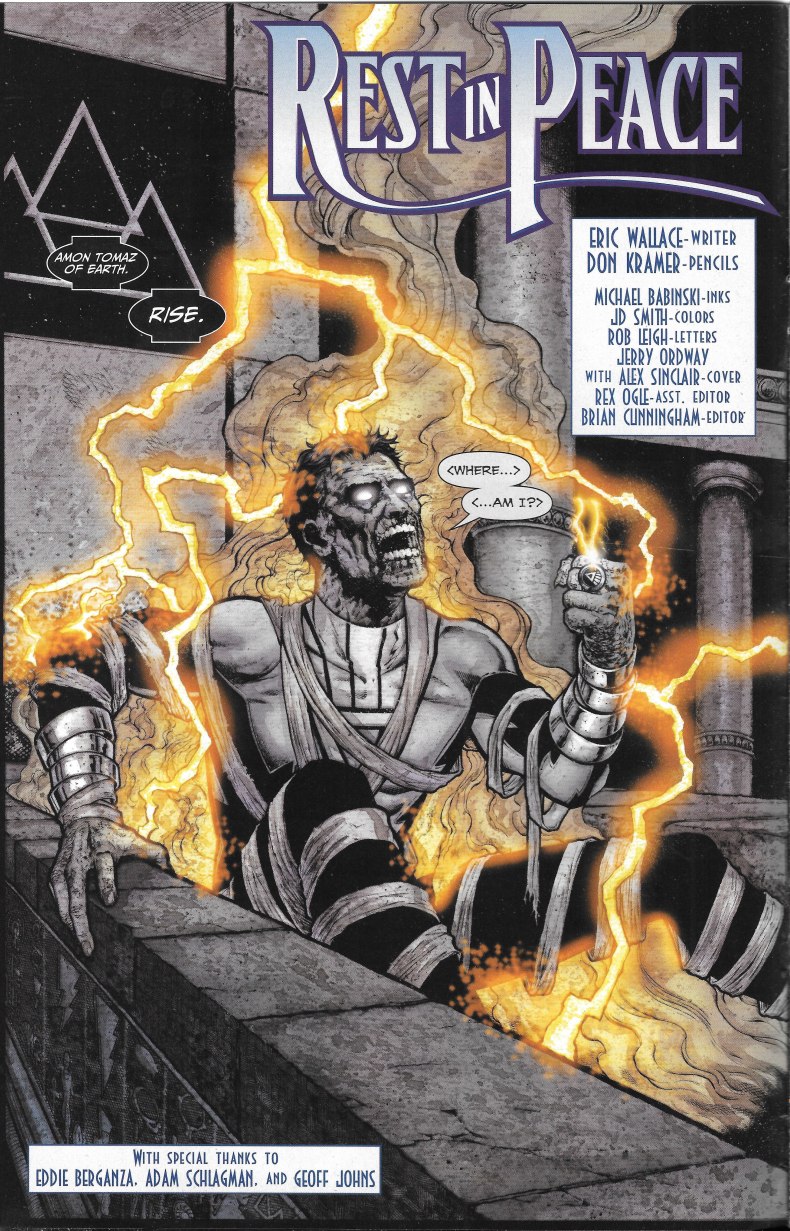 In a twist, Osiris is given life and power again by the black lantern ring, but his mind remains his own. This is a rare state for the returned in other Blackest Night books, as they are shown to be constructs of pure evil that just happen to have the mannerisms and memories of the deceased but are completely devoted to destroying all life. 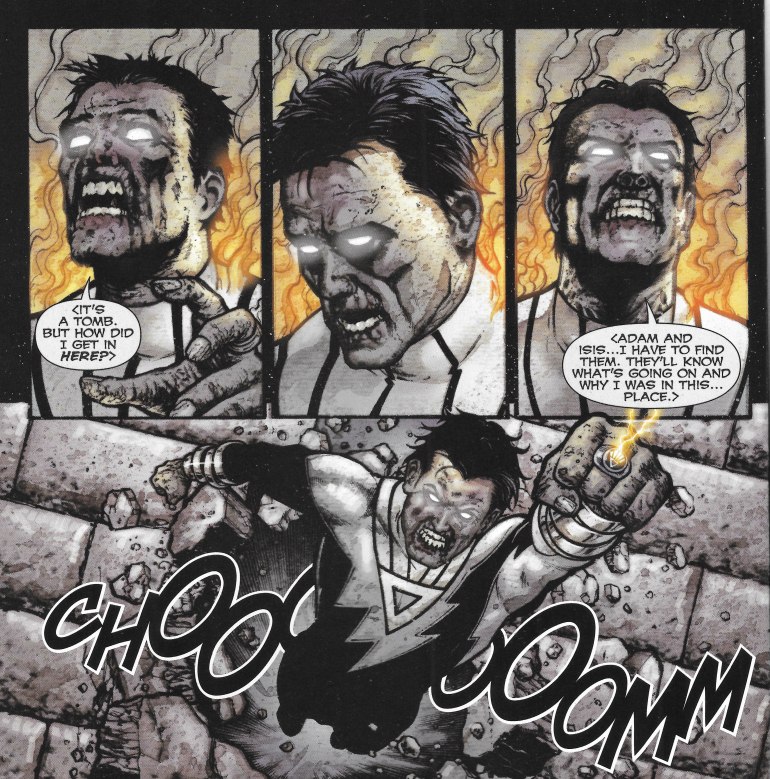 Maybe it’s the Shazam! magic at work here. Who knows? What I do know is that Osiris gets an opportunity to battle back the devil inside. Especially after he sees what has happened to Kahndaq since Black Adam left it. 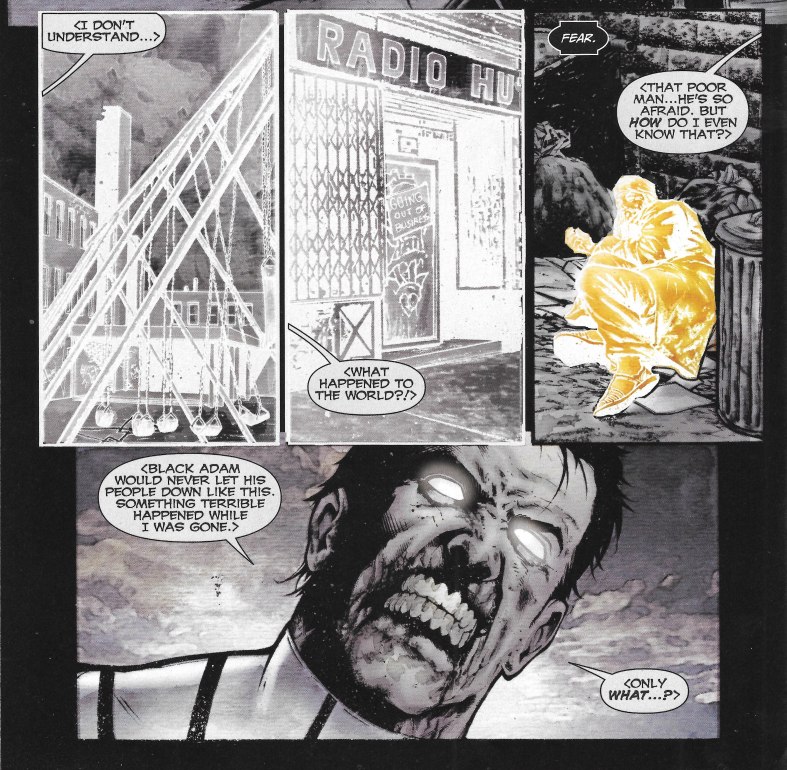 While Osiris puzzles out things, the powerless Billy and Mary Batson appear to have a eye on what’s going on around the world. When they come upon Osiris’s image in Kahndaq, it strikes a note of fear in each of them. 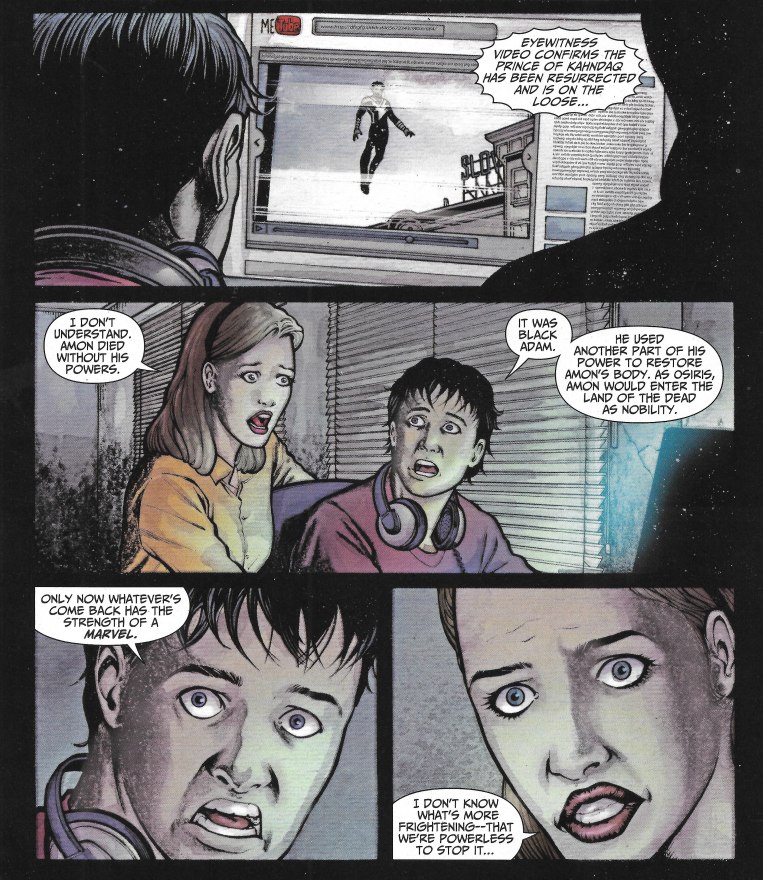 Fear that something worse might come back. And of course, it does. 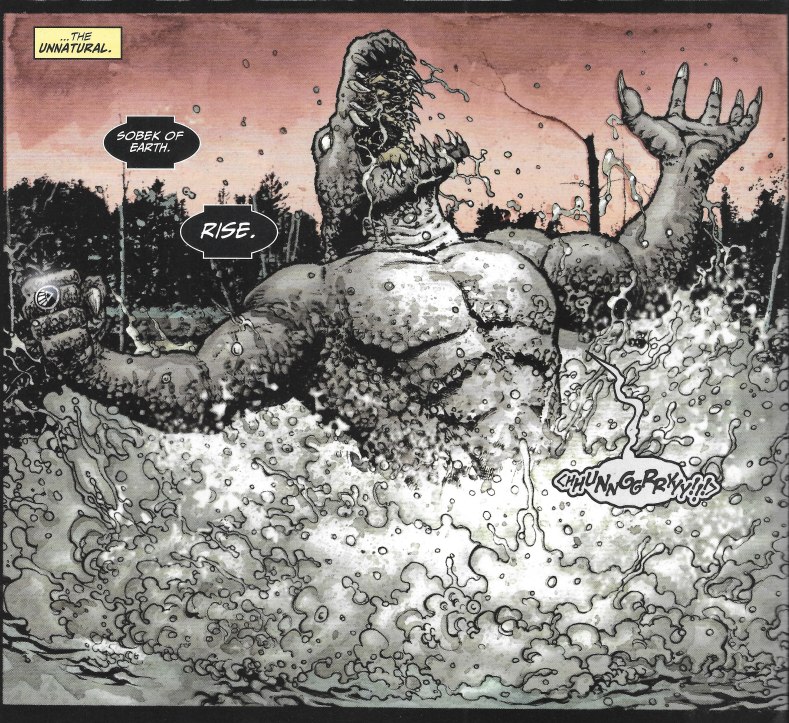 While that resurrection takes place, Osiris comes upon a statue dedicated to his dead sister Adrianna. He is overcome with emotion, the sibling being all each other had in the world. His words strike terror in the hearts of everyone around him. 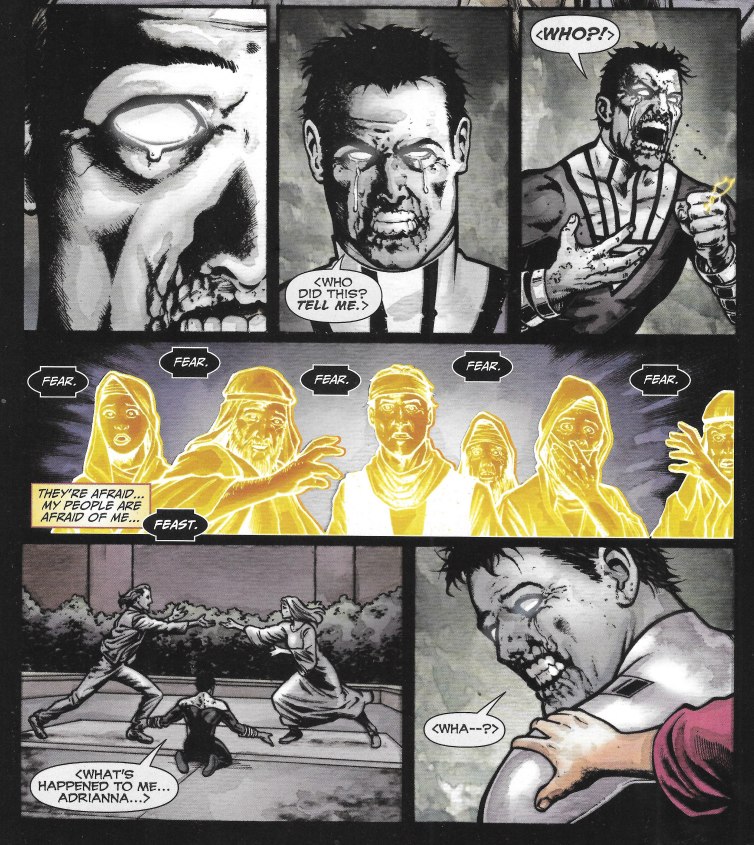 Everyone, that is, but this young lady. 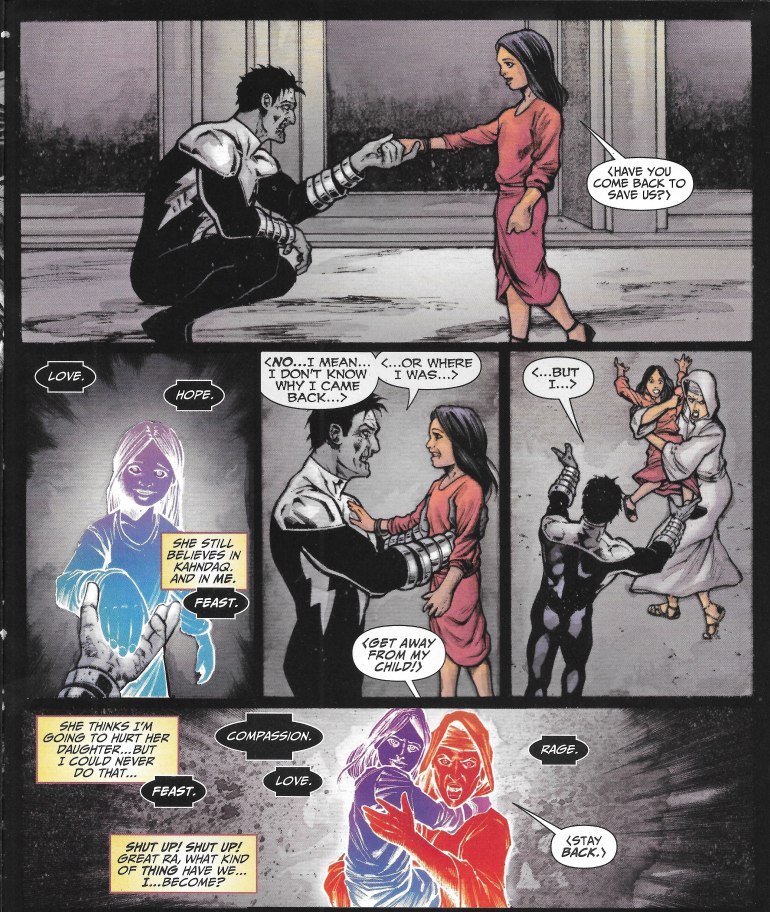 Even as the black lantern ring starts to assert itself and force Osiris down the path to murder and death, Osiris musters the strength to fight the evil influence.

And herein lies the heart of Osiris’s tragedy: he truly was a great hero who never had the time to prove it to the larger world. 52’s tale is so bittersweet in that the Black Adam Family would have made a great addition to the DC universe as a whole, but they were cut down too quickly. Osiris rejects the ring and forces people to run from him for fear of it gaining control. As he does so a new player enters this game. 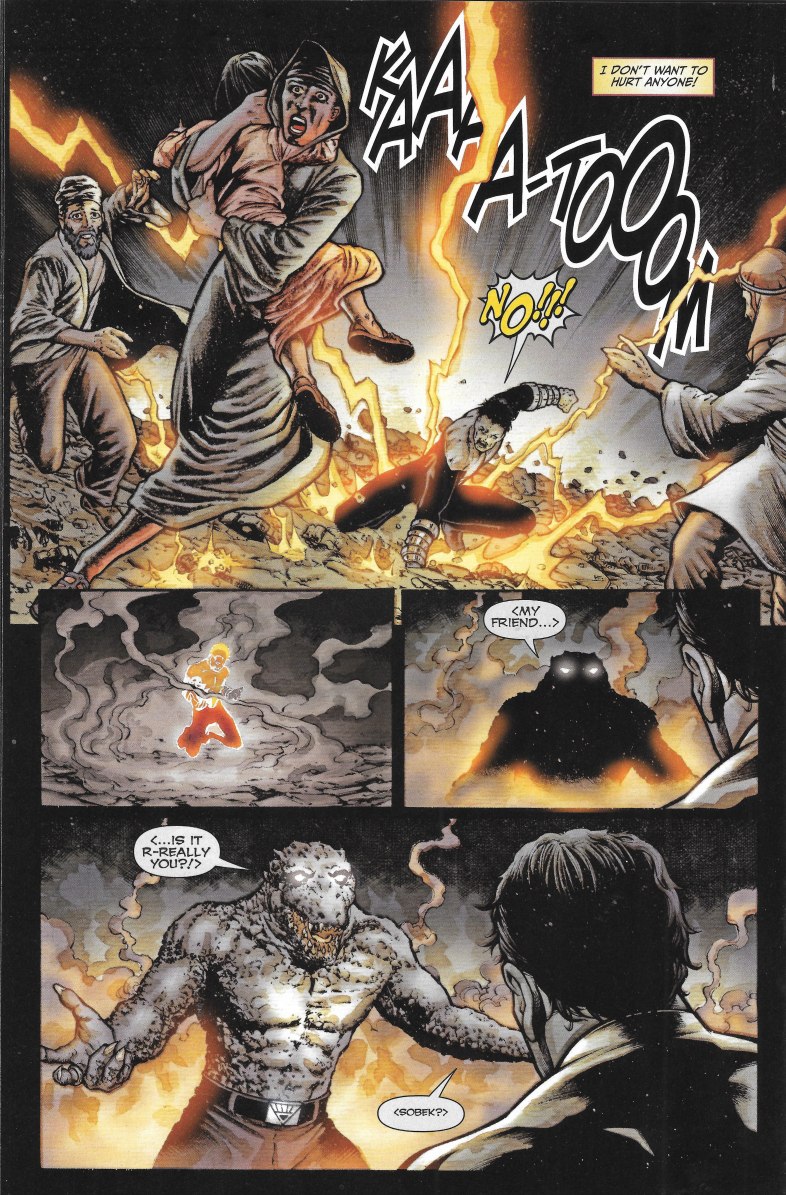 At first Osiris embraces his friend, then the memories flood back in. 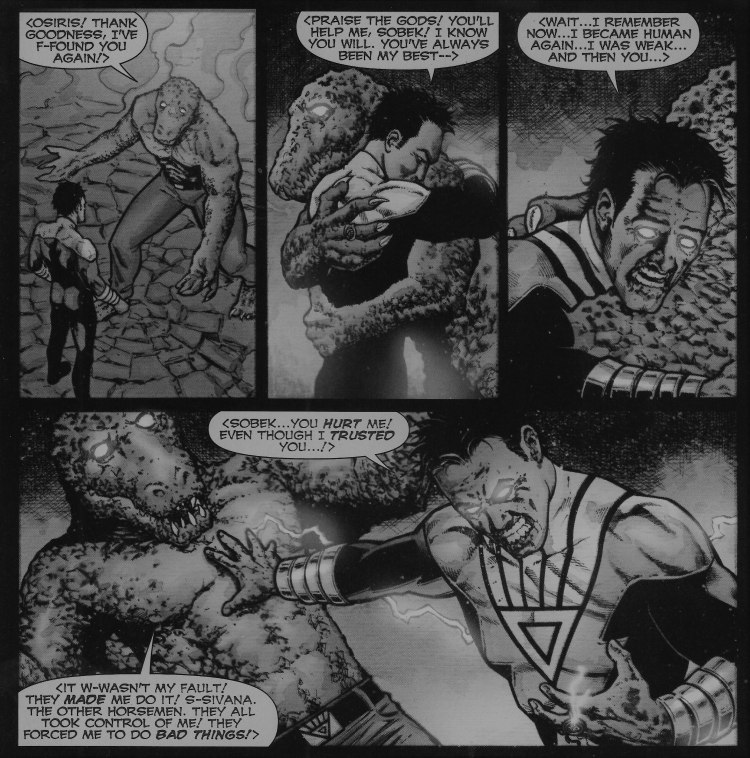 Memories that lead to Osiris realizing he’s dead and the reason for that death can be laid at Sobek’s feet. 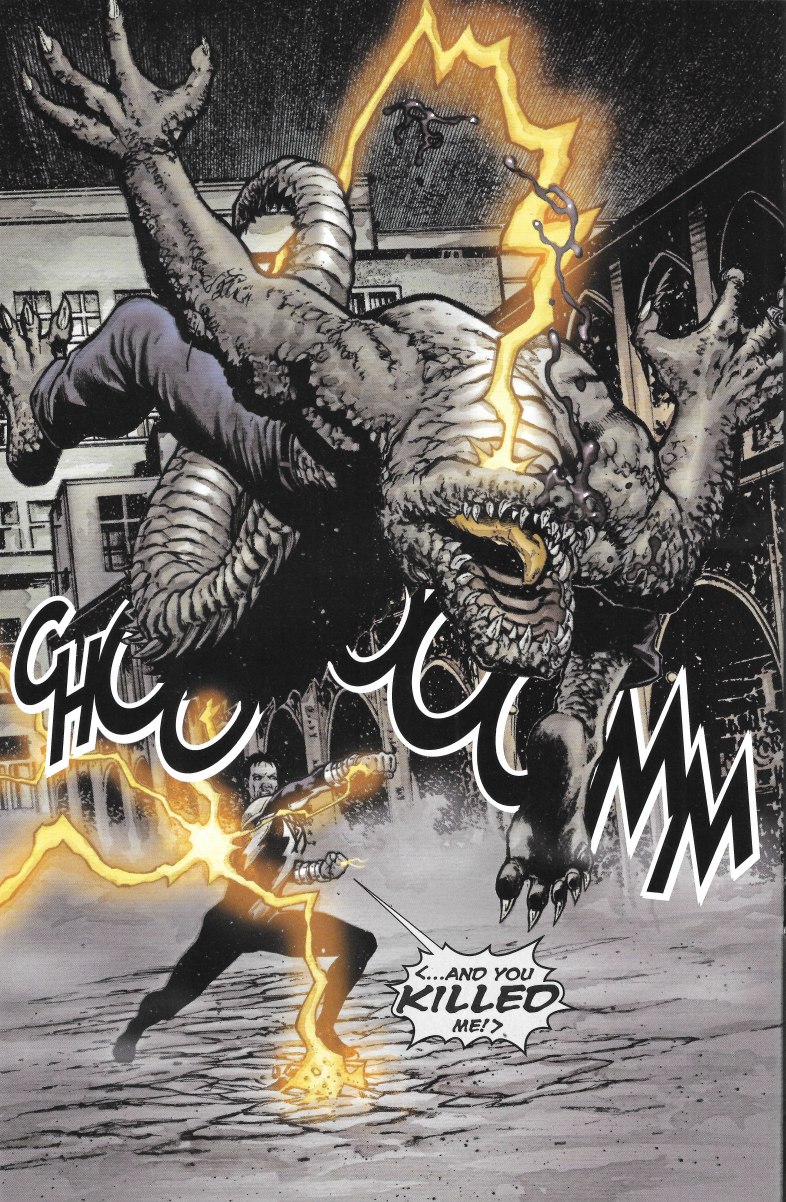 However, Sobek is still full of treachery. He fills Osiris’s head with notions that it wasn’t Sobek in control when he killed Osiris. And if you feel this will end badly, give yourself a gold star. 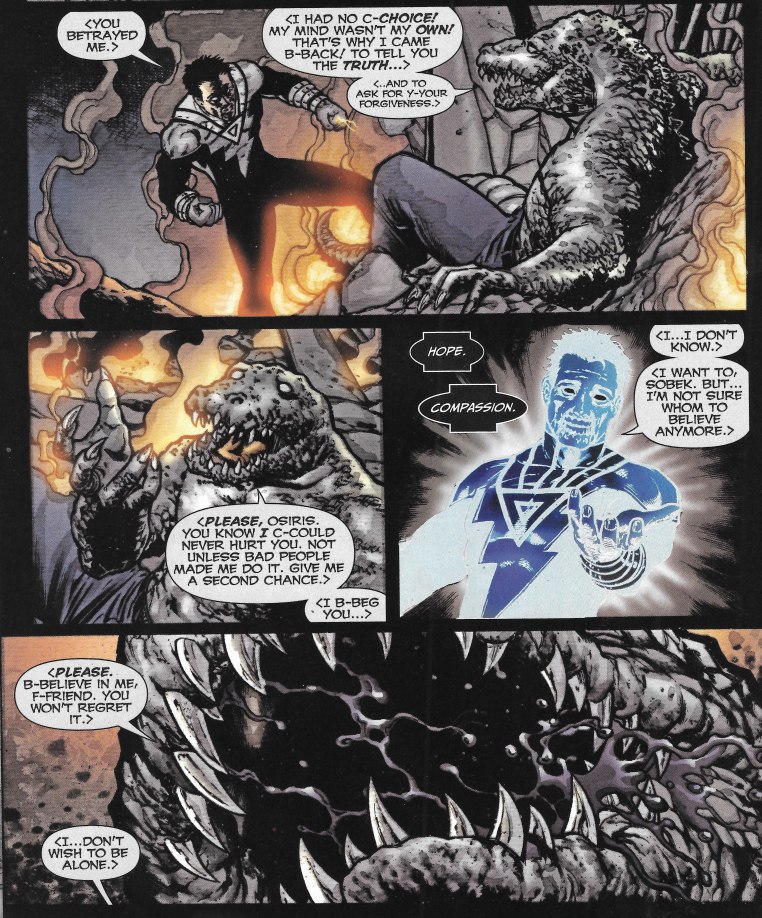 Sobek attacks Osiris, first with a power bolt while simultaneously attempting to undermine Osiris’s belief that he is a good person. This is the same route he took in 52 that lead to Amon saying Black Adam’s name and transforming into a helpless human. It appears to be giving Osiris pause here too. 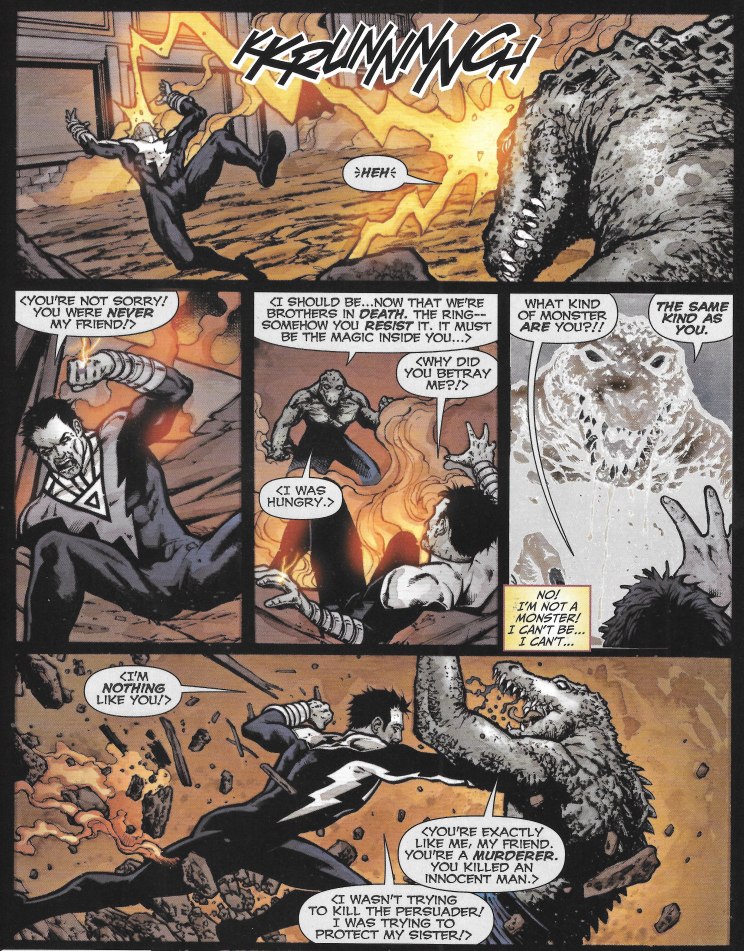 Sobek can only take the battle so long before his hunger asserts itself. He turns his back on Osiris for easier prey. 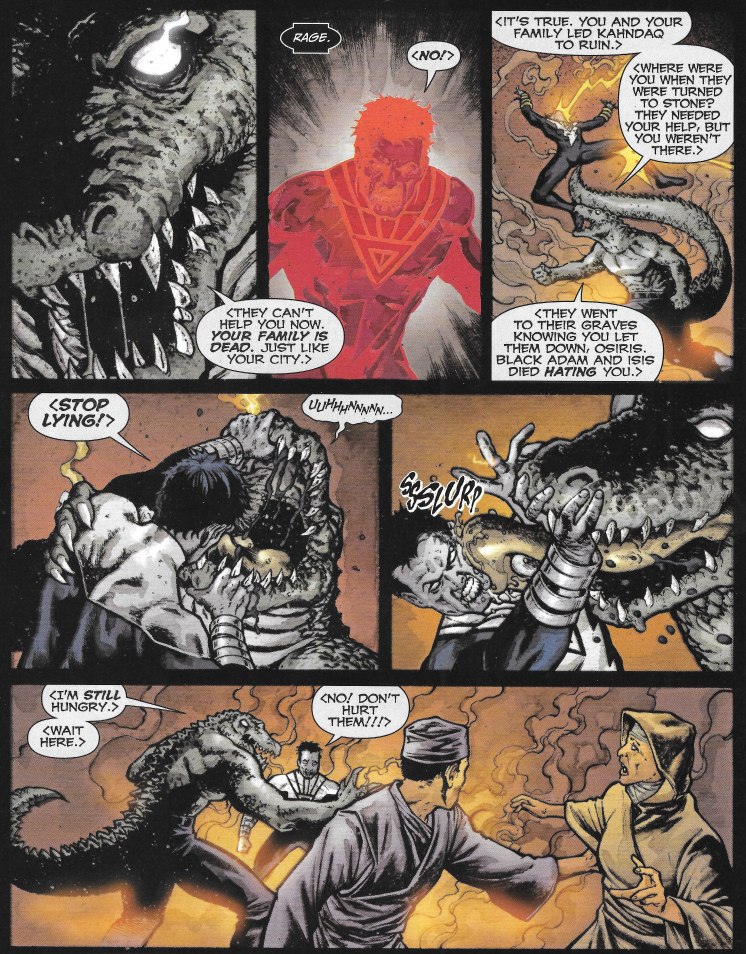 Which plays out too quickly for Osiris to stop him, ending the lives of two Kahndaq citizens. As well, the black ring is working its will on Osiris, making him desire to do exactly as Sobek is doing. 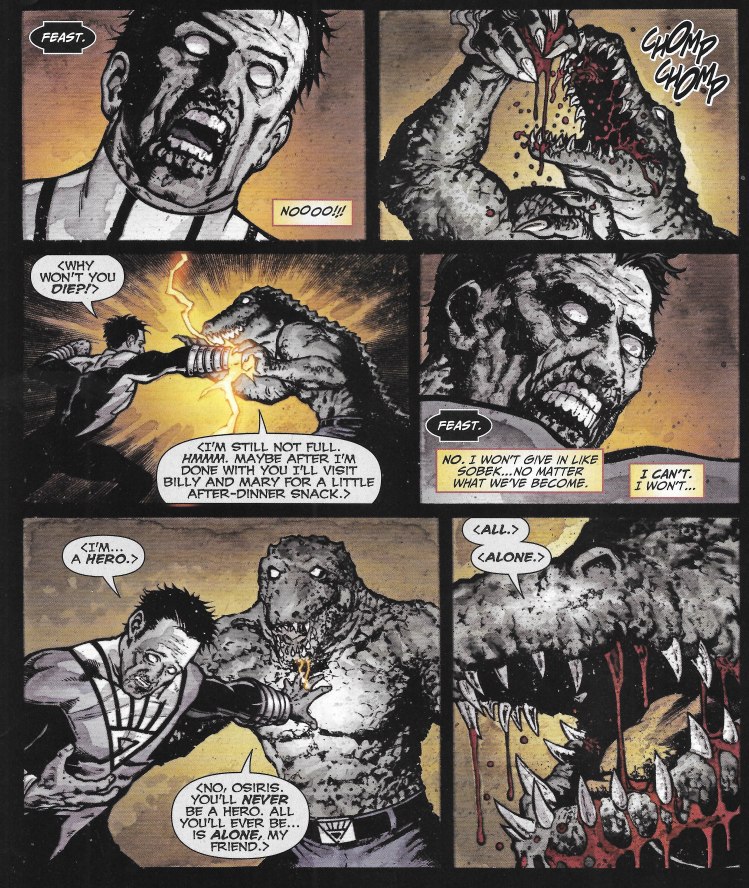 While he fights the ring, Sobek works on his other emotions. This pummeling ends with Osiris helpless as Sobek seeks to remove him as a black lantern. 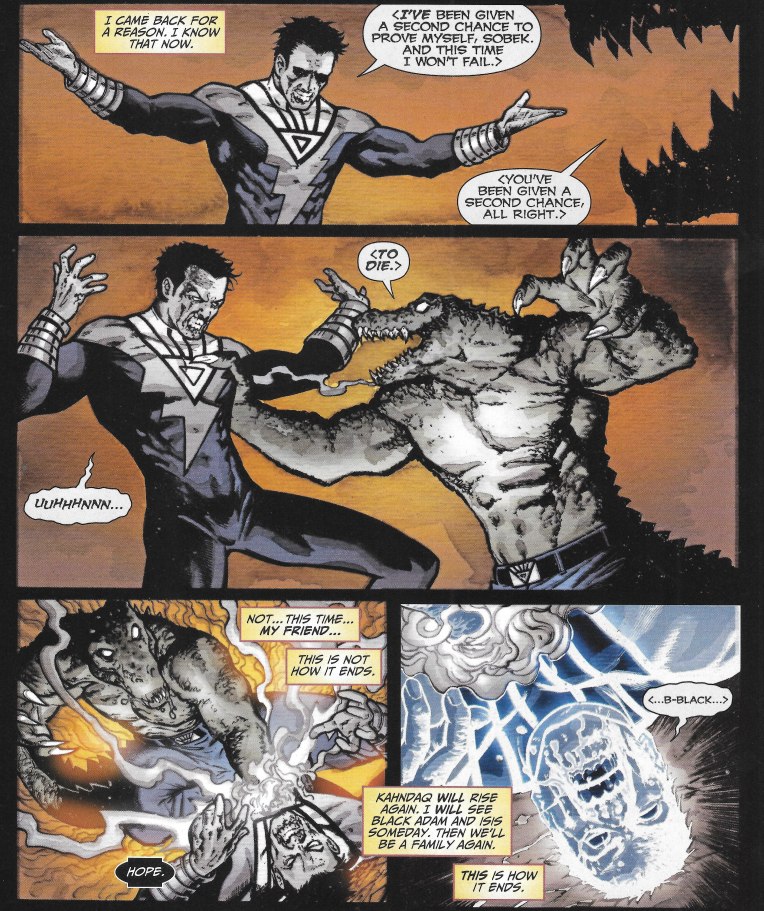 Osiris calls the lightening, though. 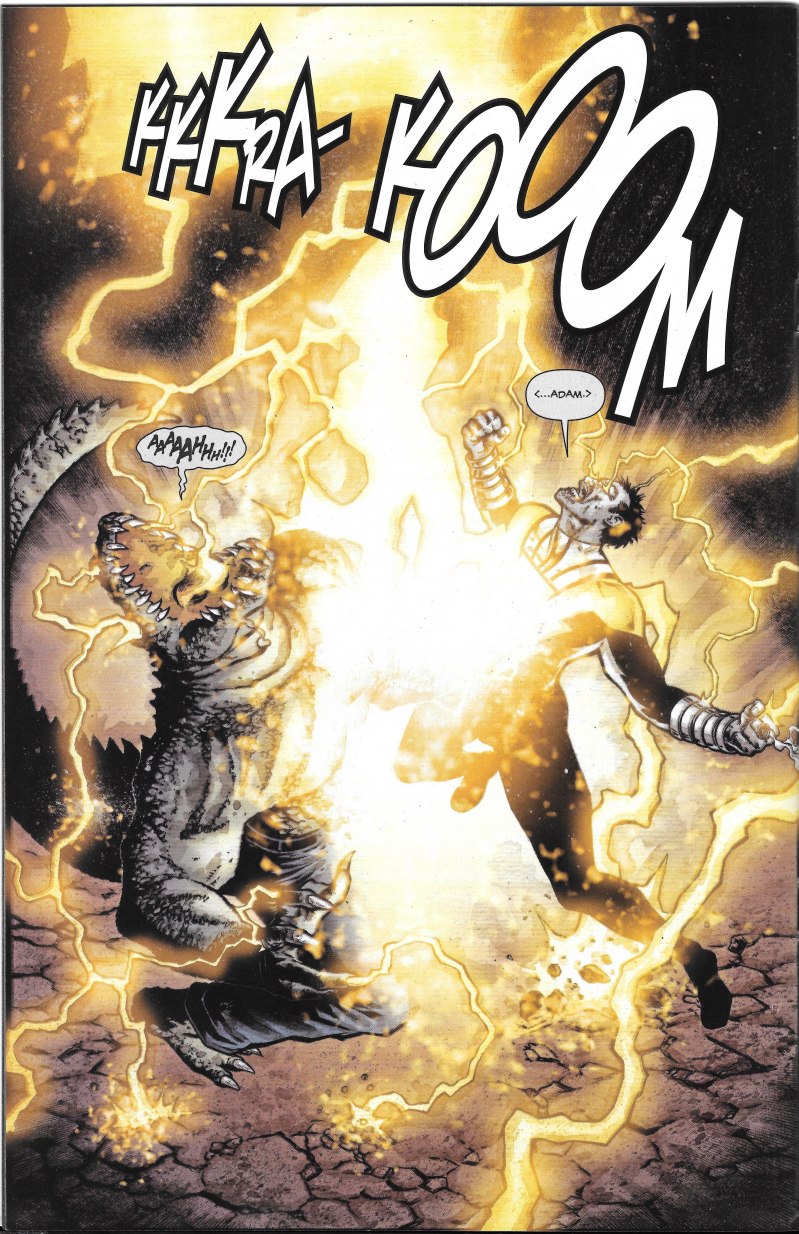 His final act sacrificing himself to take out the evil that is Sobek and to end his time as a black lantern. As his charred husk lies lifeless on the street, a small hand reaches out for his black ring… 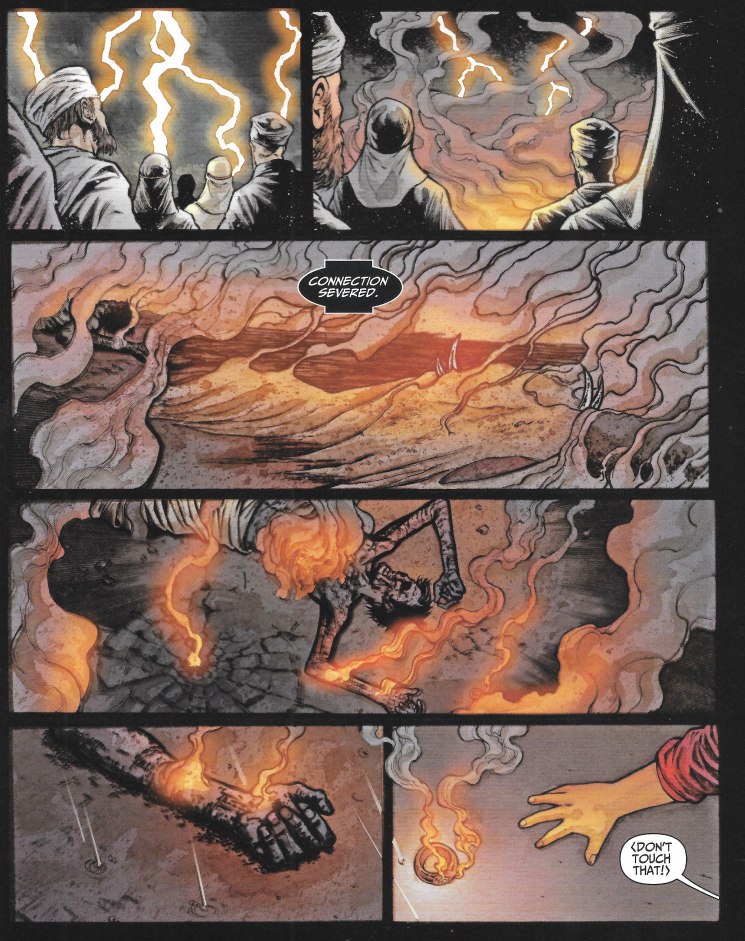 Only to be stopped... 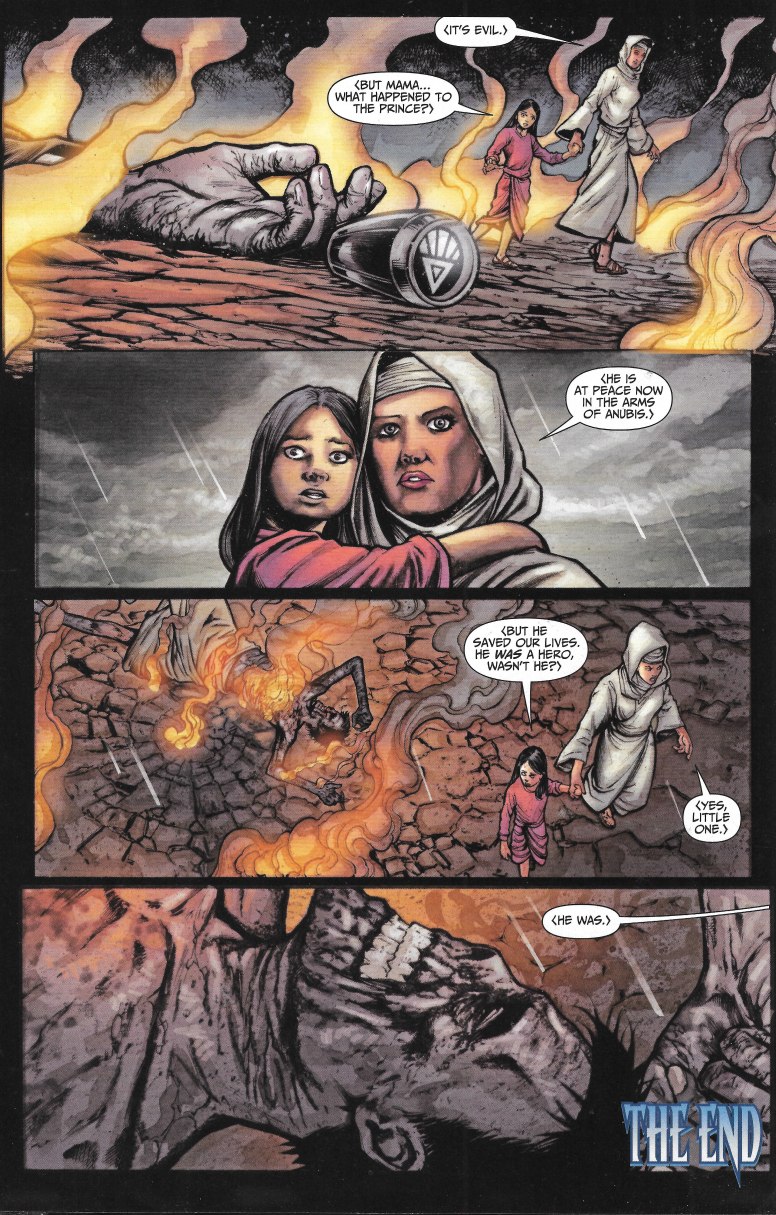 And thus ends the tale of Osiris, a tragedy like few others in the DC Universe. He was a noble and selfless hero, he lived as one and he died twice as one. All of the Black Lantern stuff was great, but this story touched me the most. All of it is worth a look and most of it is in the discount bins.
Posted by SonOfCthulhu at 3:11 AM