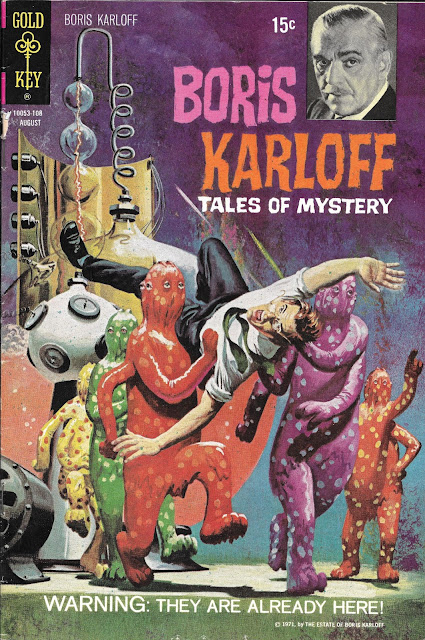 Even after he died, Boris Karloff still wanted to scare you

Boris Karloff didn’t stop after his string of horror hits in the 1930’s and 40’s. He, Bela Lugosi and Lon Chaney all vied for a short time to be named top horror film star, releasing monster movie after monster movie. Not that audiences minded.

By 1943, Karloff decided to branch out. He continued acting, but he supplemented that income with ventures in spoken word recordings and entering the publishing world by editing a horror anthology called Tales of Terror. The radio work did well, but that book was something else. The book was a tremendous success that ended up going through five printings in only two years.

After that, the writing was on the wall…or rather on the book. Karloff’s name was attached to several different horror story collections, although it is unclear if the actor had any real input or control over their contents. He had become a “brand” that sold extremely well.

So well that far into his declining years at near eighty years of age, publisher Gold Key sought him out to be the face of a comic book anthology series, something that would tie in to his “Thriller” TV show. After Thriller tanked at the end of its second season, the name was changed to Boris Karoloff’s Tales of Mystery. Stories would be horror and science fiction tales, usually with twist endings, each introduced by the master of monster movies himself.

Let’s see what this issue holds for us today… 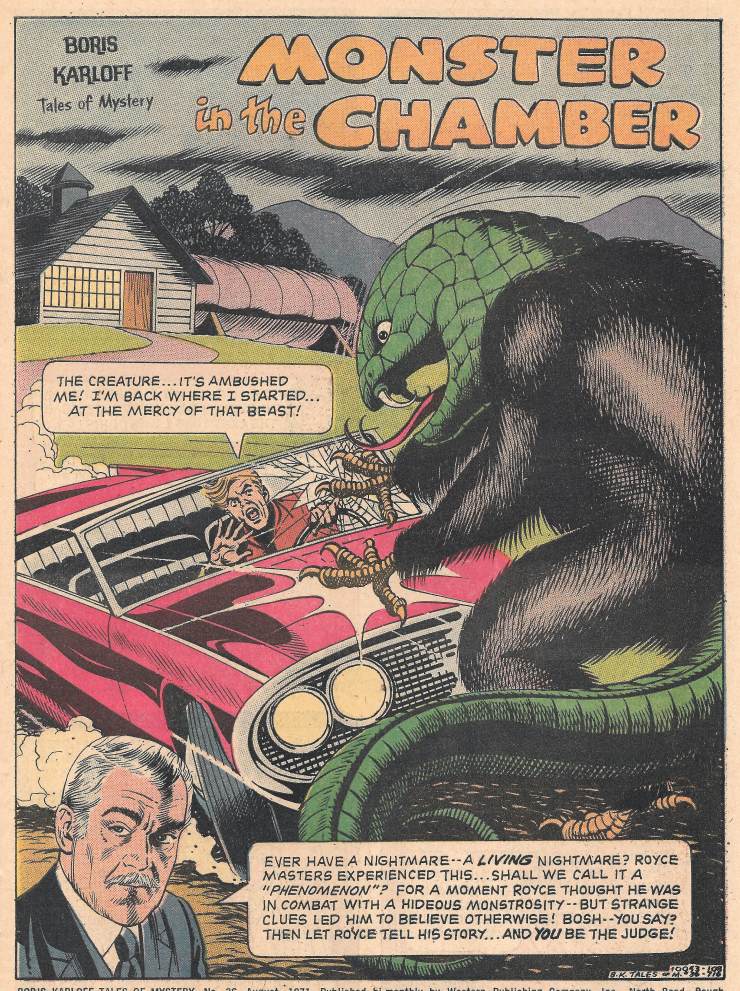 We begin with a splash page showing Royce Masters being menaced by a eagle-snake-gorilla and our host, Boris Karloff. By this time, Karloff had passed. It was several years prior, so that isn’t truly him writing/telling these stories, but with NO credit anywhere in the book, I have no clue who is writing these.

Whomever is doing the honors begins our tale with Royce receiving a mysterious call from his friend Professor Grabo in the middle of the night. He is frantic and demands that Royce come to his lab immediately to observe an incredible experiment. So Royce tells him “no” and rolls over to go back to sleep. 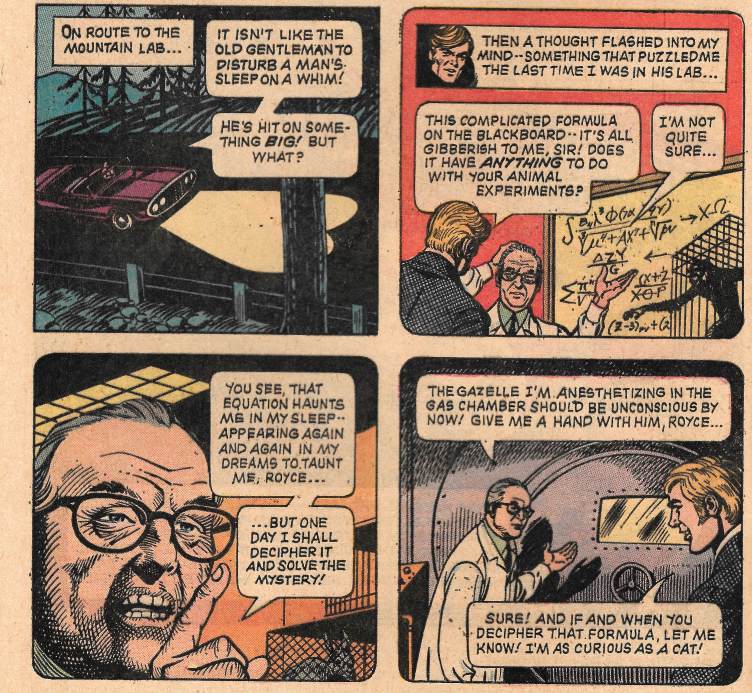 Naw, just fooling. Of course he goes. But he silently says under his breath that the Professor better not say “Look! My experiment in waking people up and getting them to come to my lab on a whim was a COMPLETE SUCCESS! You’re here!”

You know. Like he did the last five times.

Okay, we have a magic formula and animal experiments. I have no idea what the professor’s work could have to do with that splash page. Royce rushes in to the prof's lab to find… 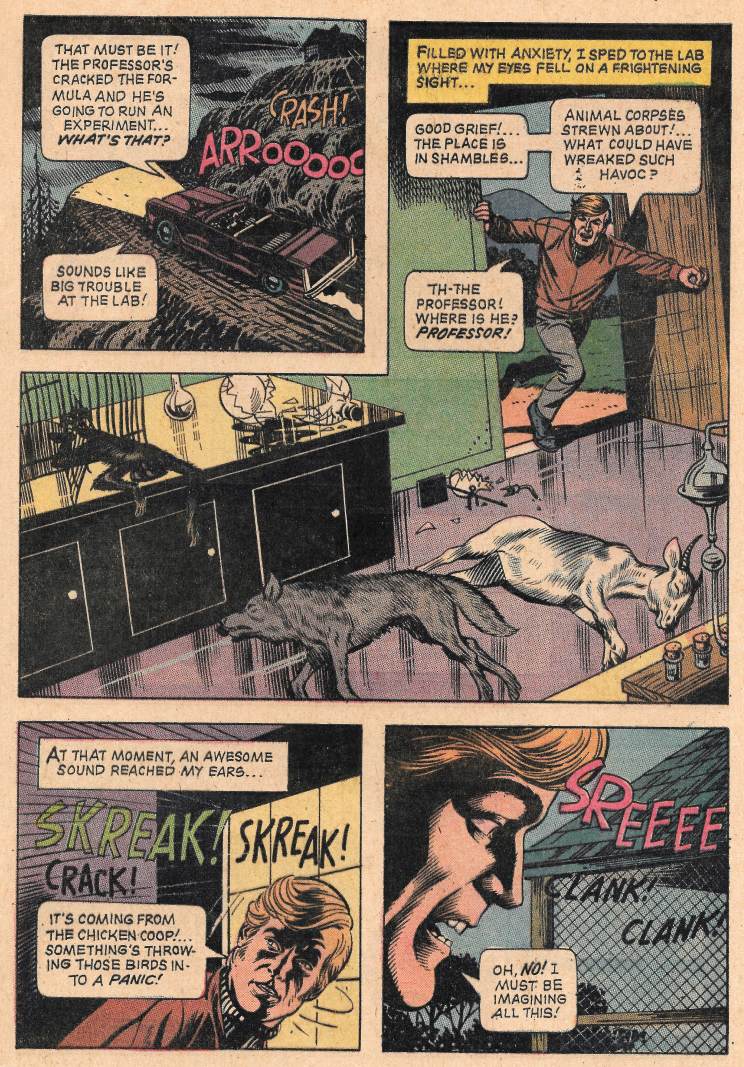 …that the professor has left his animal corpses out AGAIN! And the housekeeper said last time the she wasn’t putting them away for him anymore. From outside  comes sounds of birds in a panic, so Royce runs out to discover… 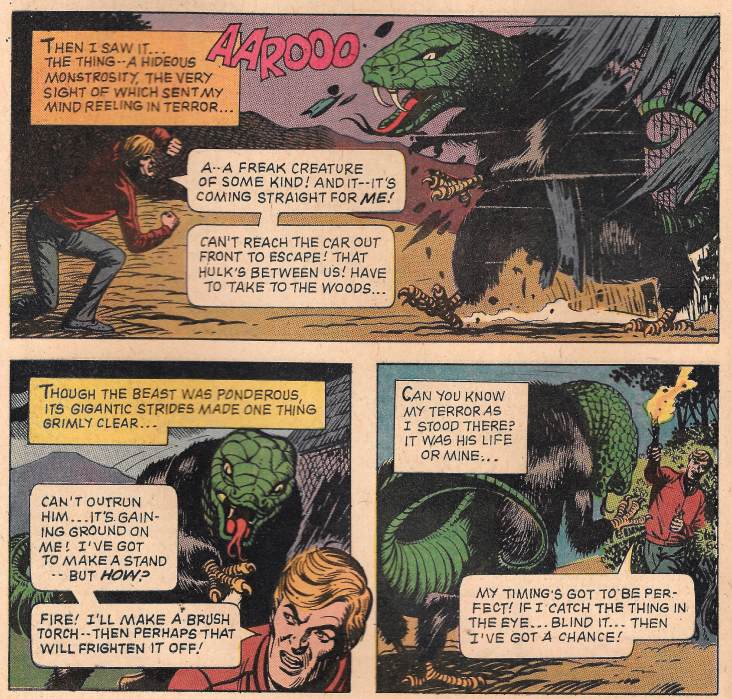 …a giant mish-mash of animal parts monster tearing up the professor’s chicken coop…chickens included. A monster that now decides to make Royce his next target. Quickly, Royce fashions a torch from the surrounding woodlands and brandishes it at the creature’s face. Because yah really wanna get next to those talons so you put fire its face, right? That’s my first though.

But I was WRONG! It’s the beast’s snake-like tongue that you really have to watch out for. 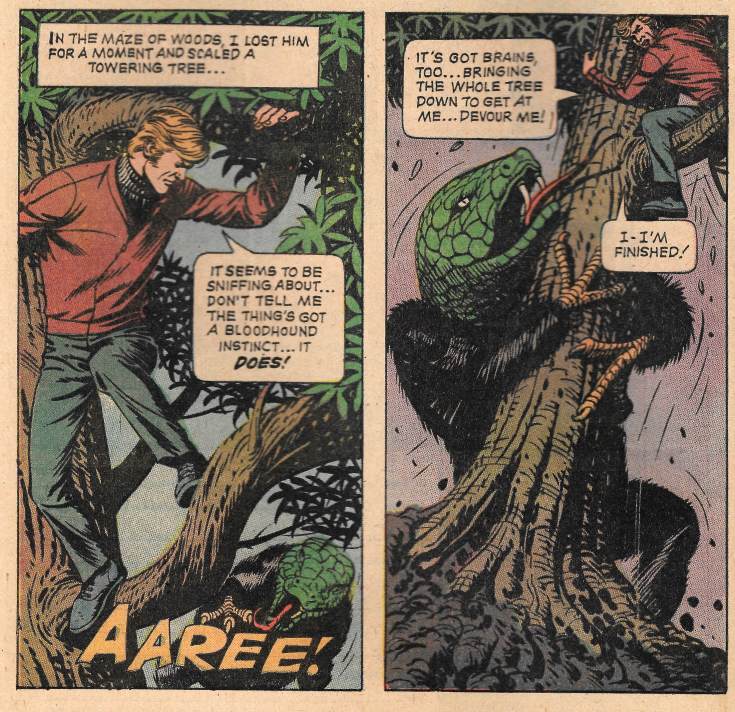 …which in hindsight: a.) this is not a bear and b.) I think the scout manual said DON’T climb a tree as it gives you no escape route. So, good going dumbass.

Royce wakes up under the felled tree several minutes or hours later. He’s still alive but has no clue why. Being smart (well, for Royce), he rushes back and tries to drive away only find the creature blocks his path. 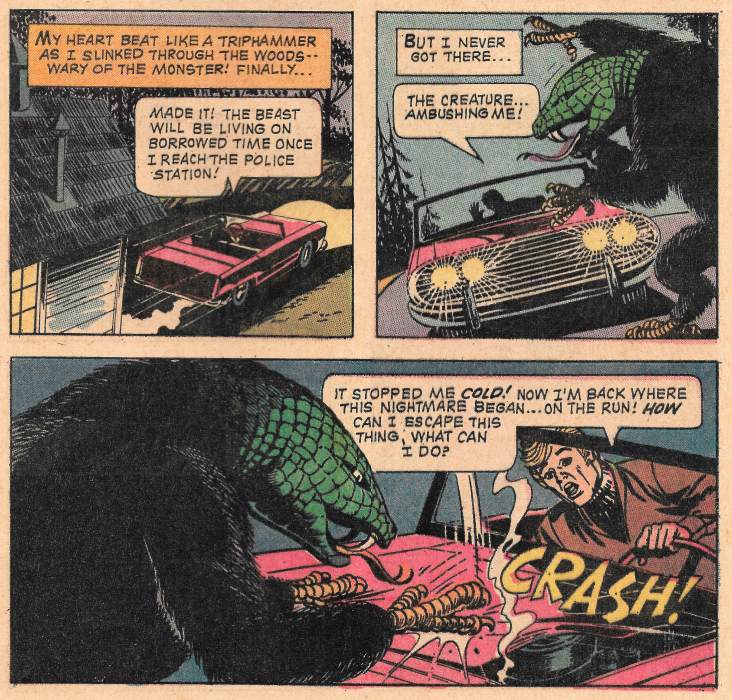 Okay, so everyone say it with me: “The creature IS the professor.” I think we all get it now. The obvious thing to do is to trap it until someone can find a way to turn it back. Which Royce seems to understand too! First he leads it into the gas chamber and locks it in. 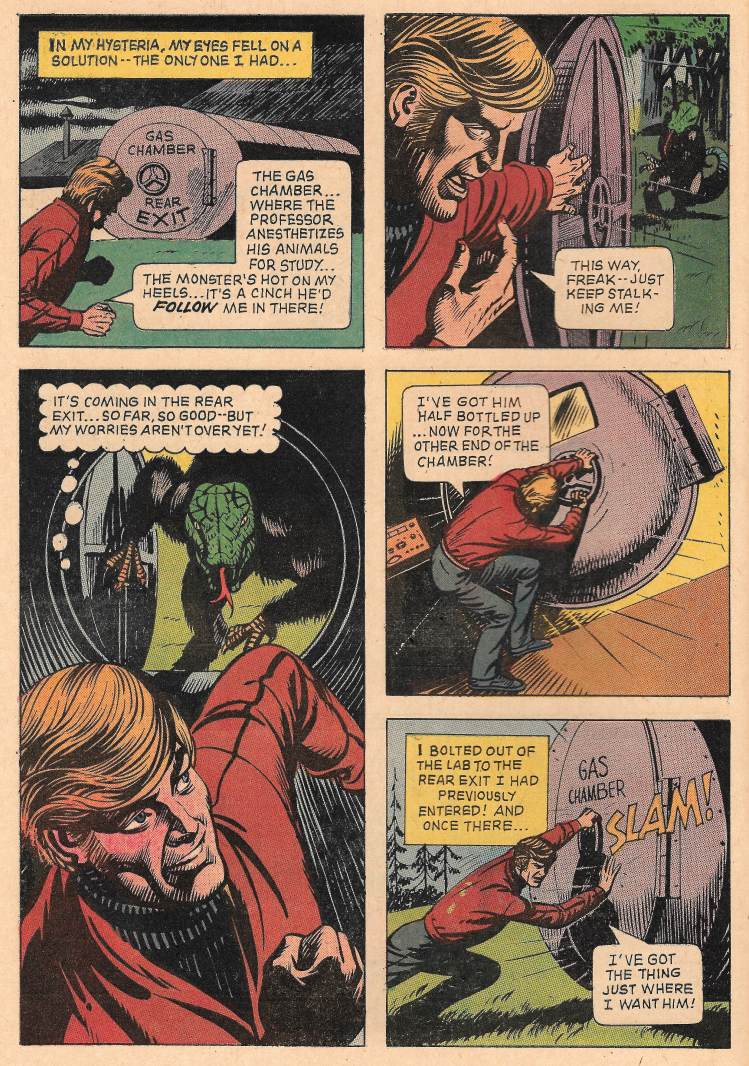 And then he…wait! Royce! Don’t press that button! That’s the one that will gas it to DEATH!

Aww…and then Royce is in denial about WHY the professor called him out to his lab and that he just murdered his dear friend, the professor. The moral of this story is “Don’t be friends with idiots who can’t put two and two together.” 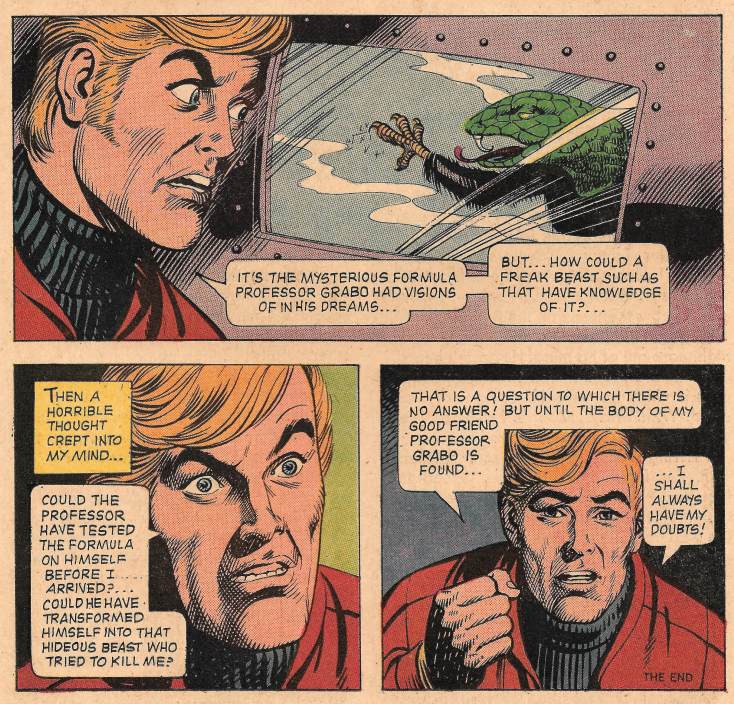 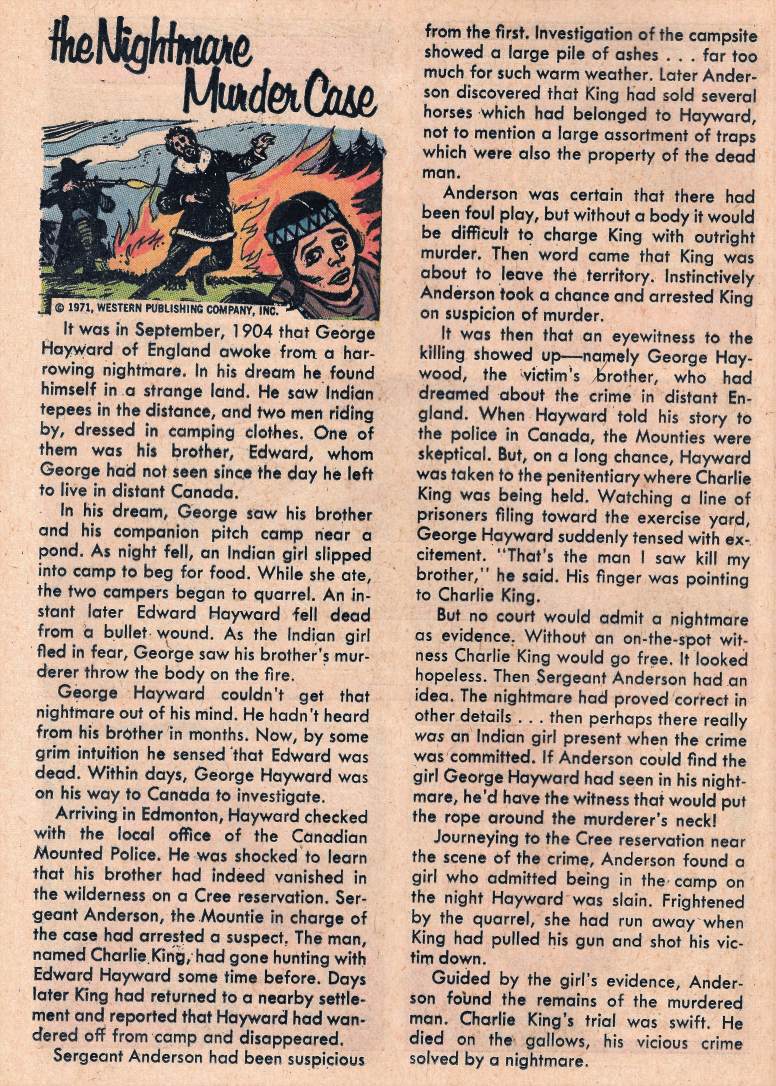 Look kids! Here’s a story in TEXT that you won’t read while you skip over the page to the next for more COMICS. Because pictures are better. But if you ever decide to read it, it is about prophetic dreams, Cree Indians, and murderers burning the remains of dead bodies. Good times, kids.

Ah, a good ole Deserved fate tale and a really neat one too. We begin with a bank robber on the run. He’s about to take a detour. You see that signpost up ahead? It’s a marker between a land of shadow and substance, of light and darkn…I’ve been told by lawyers representing the estate of Rod Sterling that I can’t continue with this opening.

So…uh, the robber sees a bridge. 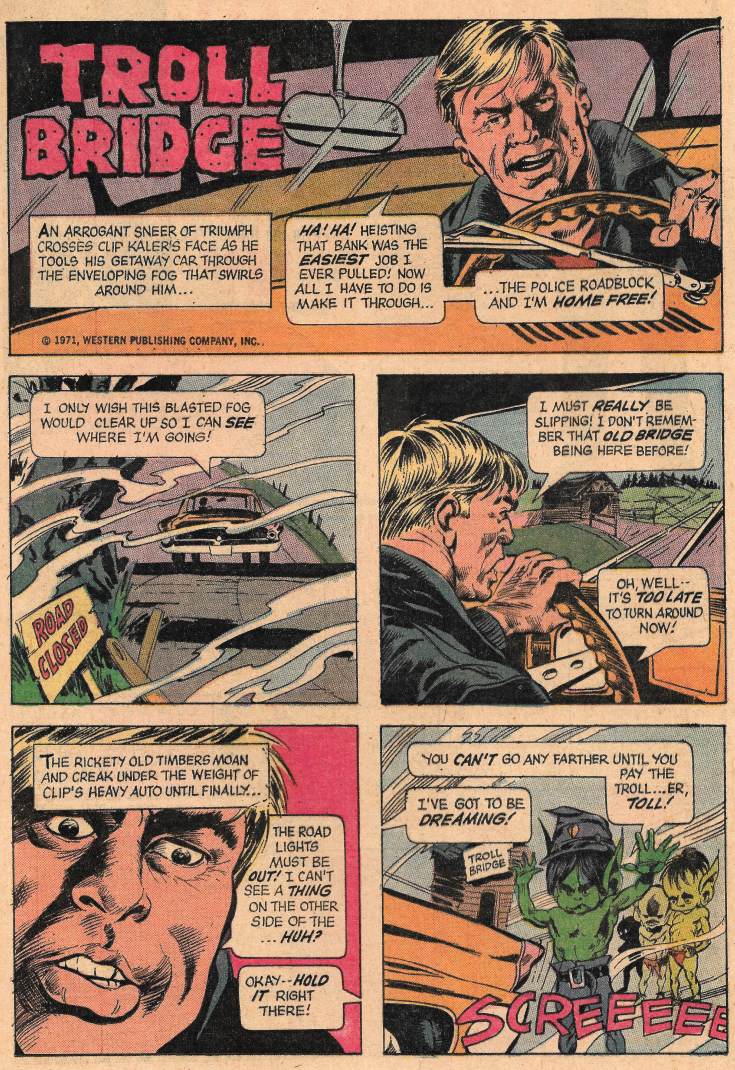 And upon that bridge are a bunch of the less attractive extras to the 2015 movie Trolls. They stop his car. I wonder what they want?

Oh, well that’s easy enough to give…or is it?

Jeebus, man! That looks like the smile of a child predator. I’ve seen dead bodies look more enthusiastic. But who am I to judge? Let’s check with the troll experts.

Yeah, that’s what I said. 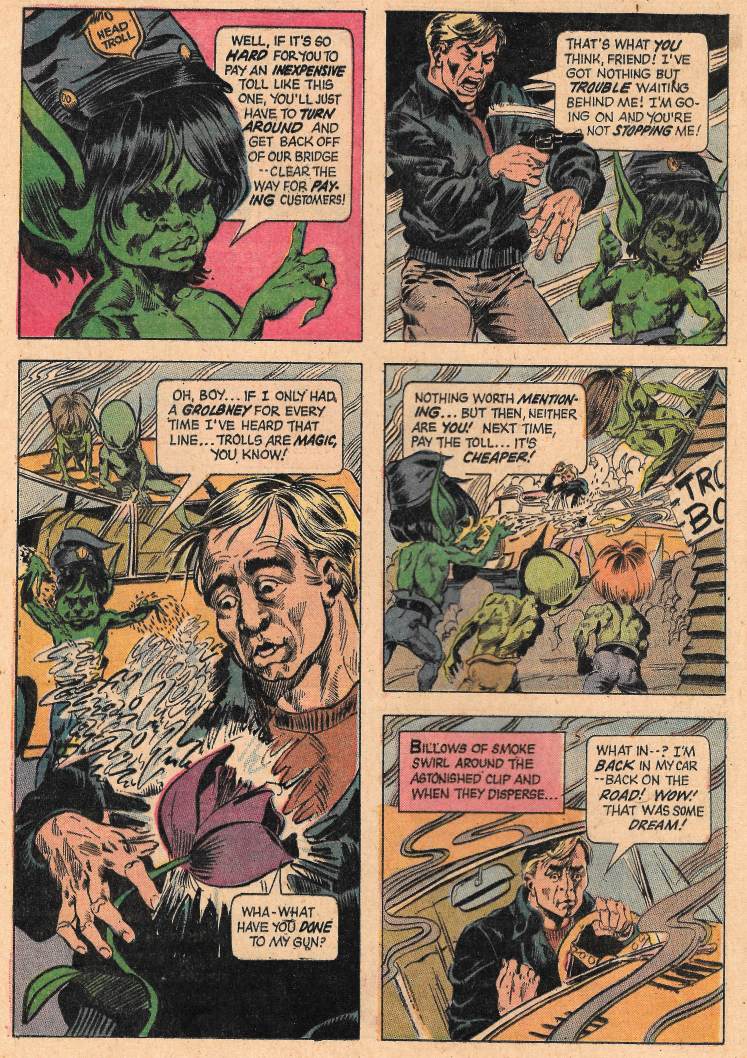 The jerk pulls a gun on the cute little, highly marketable trolls and they turn it into a flower. After that, they magic him back into his car and put him on the road…

…a road that leads right into the police road block and twenty-to-life in prison.

Meanwhile another unsuspecting couple rolls up to the troll bridge… 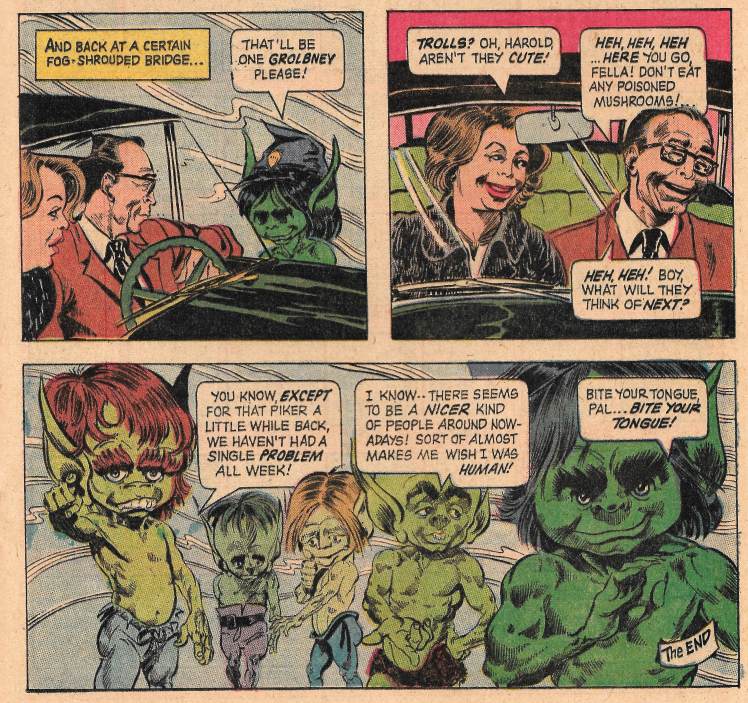 … and are sent merrily on their way. Many Grolbney’s were had by me at reading this story and another reason to thank the late, great Len Wein found.

That brief side road puts us back on track for some REAL TERROR! This time in a green house where the moral is “men are dangerous and shouldn’t oversee anything.”

Meet Jeff Gordon (NOT the race car driver), who is attempting to grow giant-sized carnivorous plants.  Because nothing bad could ever come of that, right? 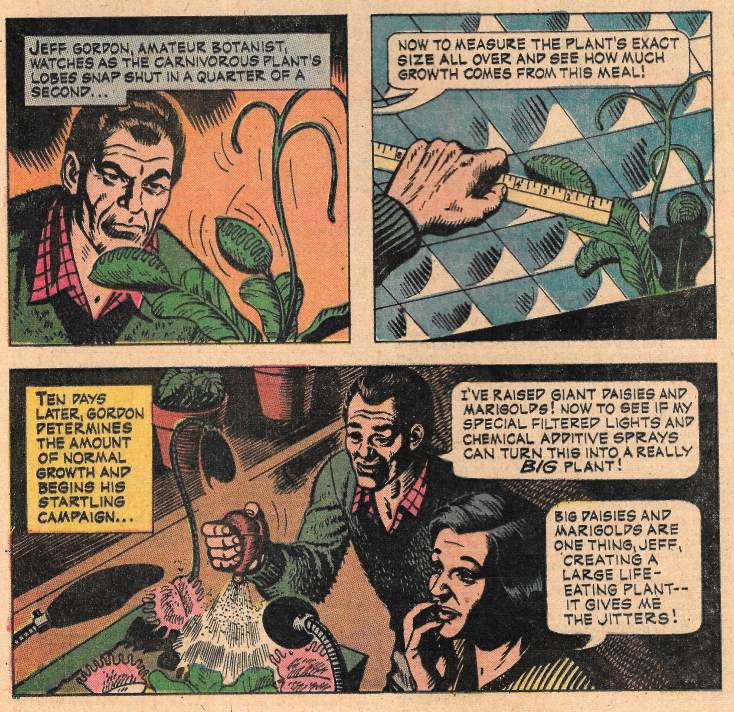 The person speaking sense here, is Jeff’s wife Martha. Jeff seems to think that Martha's simple woman-brain doesn’t understand WHY men need to grow giant man-eating plants and that she’s stupid and likes dolls ‘n stuff. Martha believes Jeff hasn’t thought things through to their logical and inescapable conclusion. One of these people is on the right track. But which ONE?

Jeff keeps right on growing bigger and bigger killer plants, even starting to feed them small mammals to keep them alive. I can only assume he thinks they would make good rat traps one day? I guess? Who knows why Jeff is so cray-cray about huge killer plants? 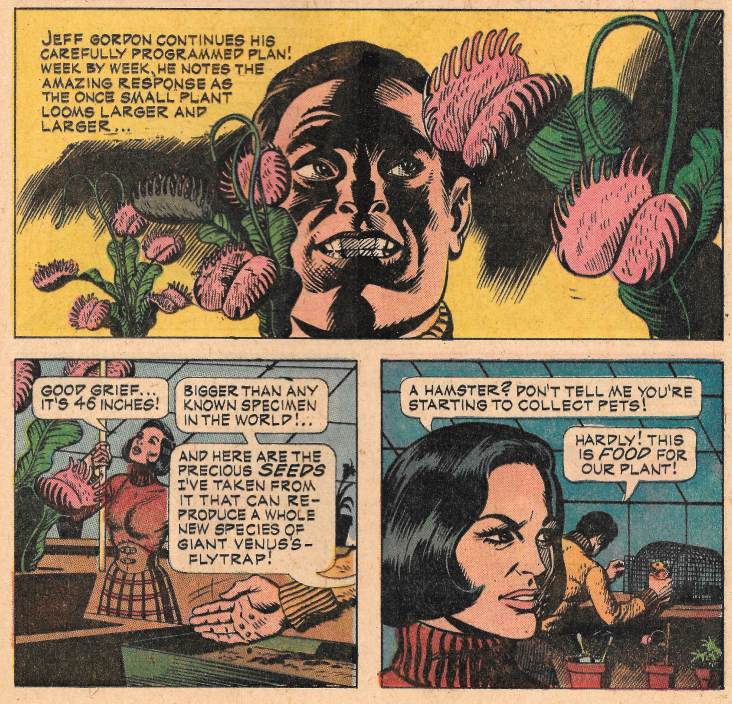 Killing innocent small mammals upsets Martha, because she’s full of estrogen or it’s “that time of the month” or something, Jeff thinks. And as his plant suffocates and murders a poor furball, he thanks the male god that he is full of maleness and has a penis. 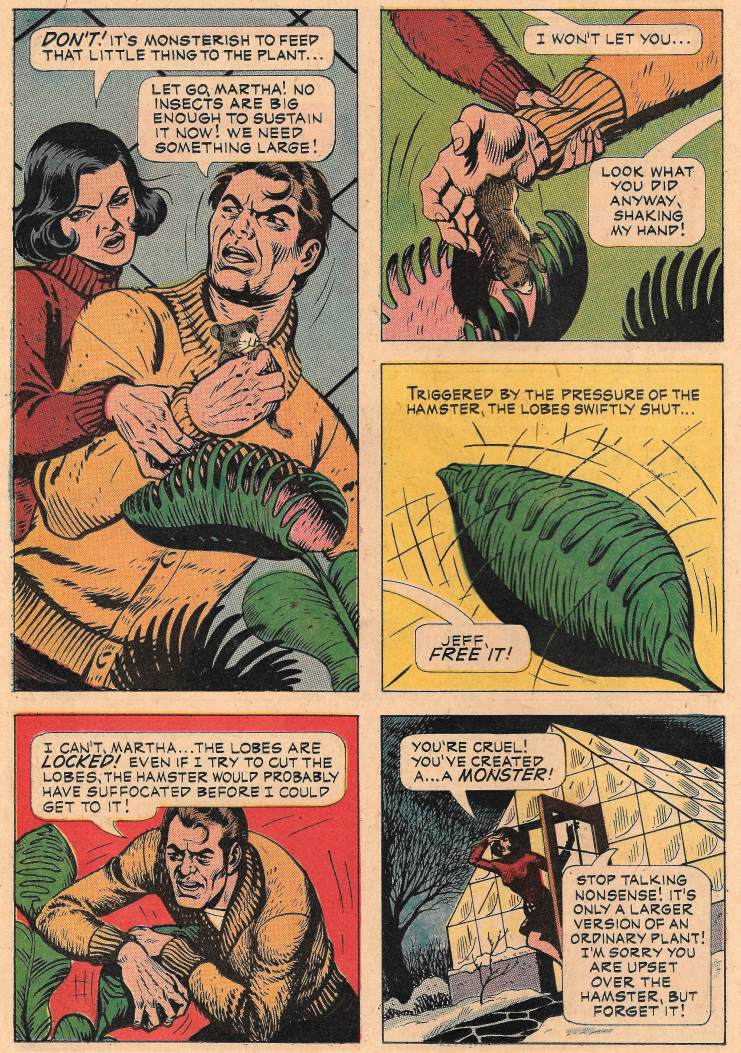 Then the fateful day arrives when Martha hears rustling around in Jeff’s lab at night. She goes in and is snared on a vine that is moving around like a whip or a tentacle. Lucky for her Jeff is a light sleeper and rushes to her rescue… …and being a sturdy young stud, Jeff pulls out a hatchet and attacks the plant, which swiftly smashes his hand axe against a window and then tucks him into a pod, trapping him and swiftly suffocating him. 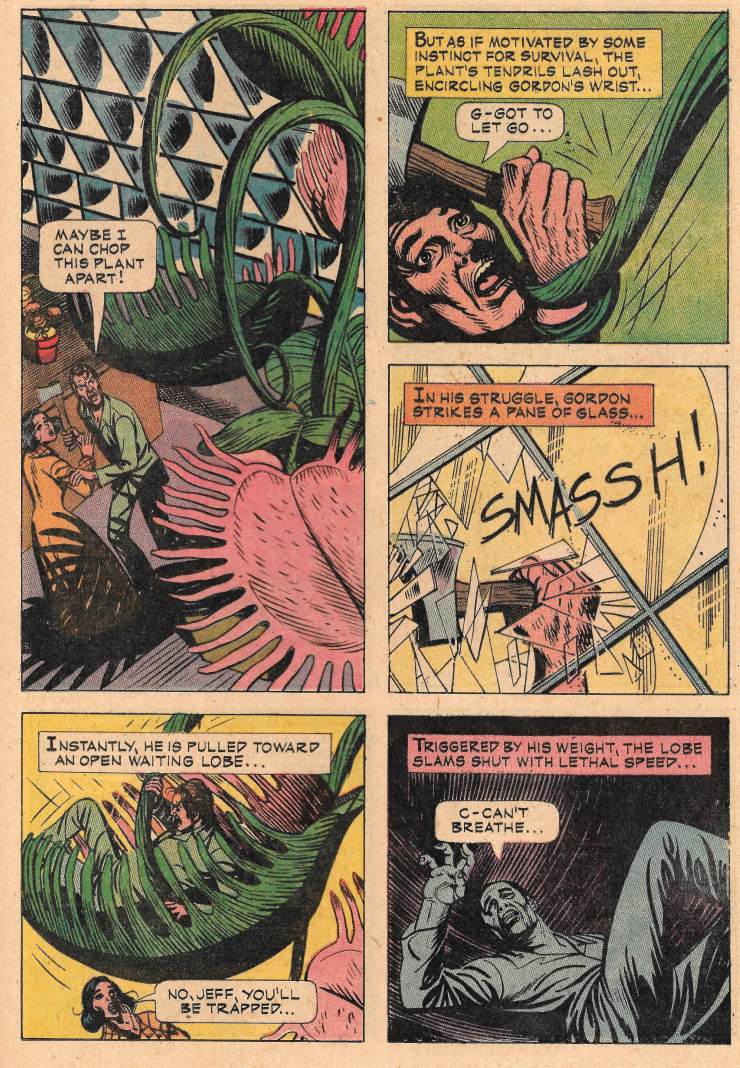 I wonder if Jeff’s last thoughts were “I should have made these even BIGGER so Martha could be in here with me”? 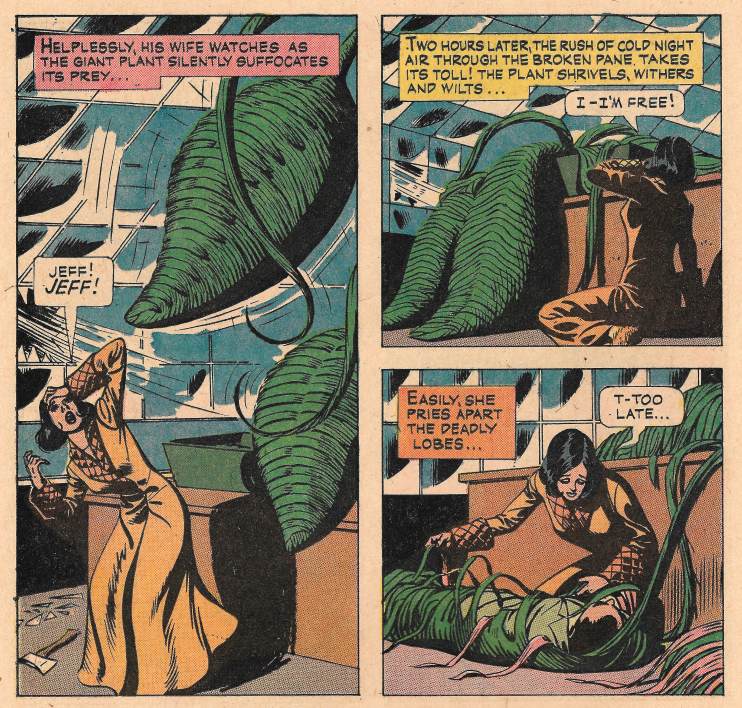 No matter, as the cold from outside kills the plant overnight and Martha is able to retrieve Jeff’s body for burial (which she is totally going to do, ignoring his wishes to be put in a boat and burned like in that Viking’s TV show Jeff watched all the time.)

And because she is smart, she burns all the seeds and destroys his research. Bright lady.

Love that obit, too!

These last two stories cemented my love for this title. They were polar opposites in terms of what they were trying to accomplish, but both of them succeeded in making me laugh out loud. Let’s see what the FIFTH story in this volume does to me…

Professor Sloan Mattson teaches some wacked out stuff to classrooms of acid-dropping hippies. He goes on and on about different dimensions and how our minds need to be expanded to be able to see them all. Makes him a real popular guy since his lectures are right up most drug users of the 1970’s alley. 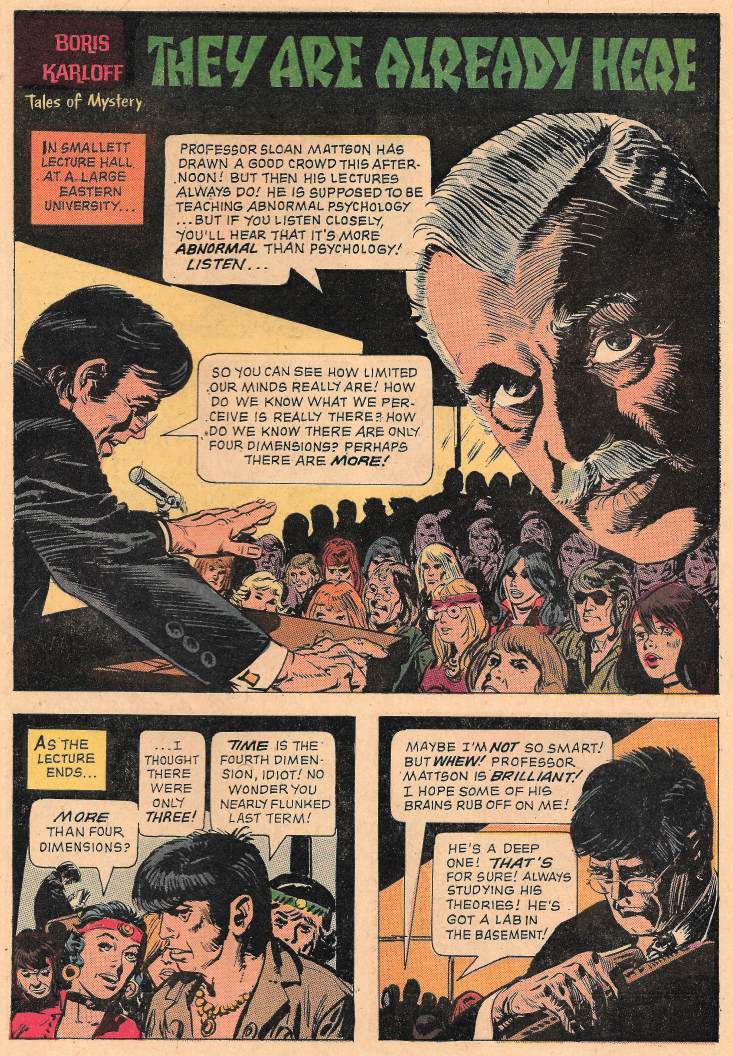 And like all good professors, he has a “lab” in his basement. Sure. A “lab”. Just like his pal Walter White.

And LOOK! I’m not wrong. He decides to try out an experiment on HIMSELF that very evening to test his “other dimensions” theory. He has the janitor lock him into his lab overnight while he does acid and tries to find another plane of existence. 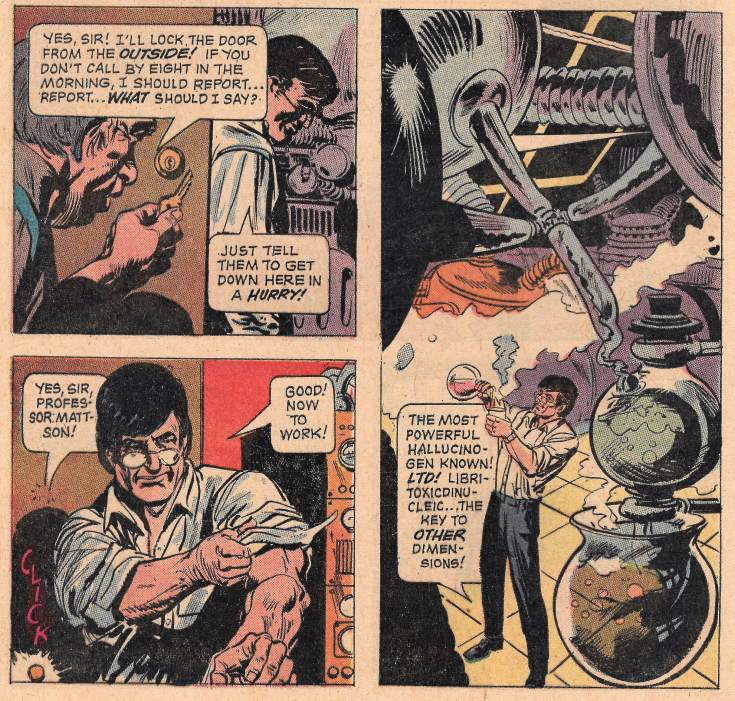 He starts out drawing shapes because…well, I’m sure if we asked the good doctor at this very moment, he would think he was giving an coherent answer but the truth is that he’s spaced completely out. So far out he sees (get this) polka-dotted alien beings from another dimension. 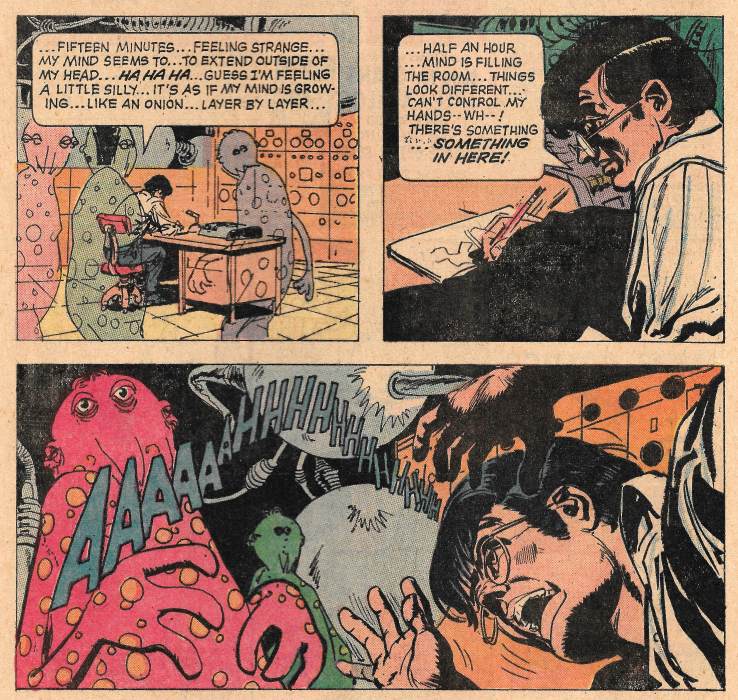 That’s even too much for the professor and he starts to disbelieve his own eyes. If only someone would give him a pinch to show him that he isn’t dreaming… 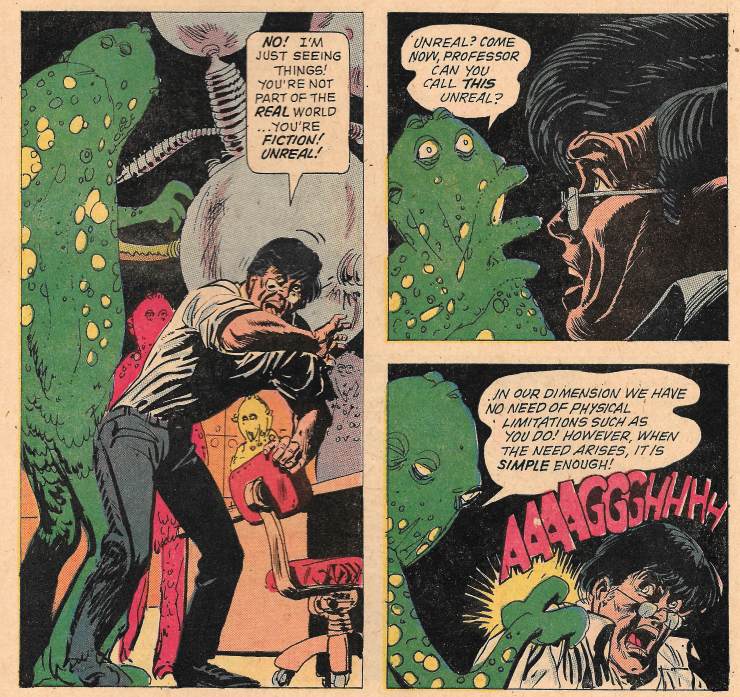 Okay, someone who isn’t seven-feet tall, green with yellow polka-dots, with eight eyes and no mouth.

Also, what the heck guy? This PROVES ALL YOUR THEORIES. I’d think you’d be ecstatic to meet beings from another dimension. Even ones that look goofier than heck. I mean yeah, it’s going to kind of hard to write this all up and not get laughed at, but you can take people here and show them. Possibly that’s worse, because these dimensional beings will probably be called Mattsons, since you discovered them. Who wants their name in the history books next to pictures of these guys… 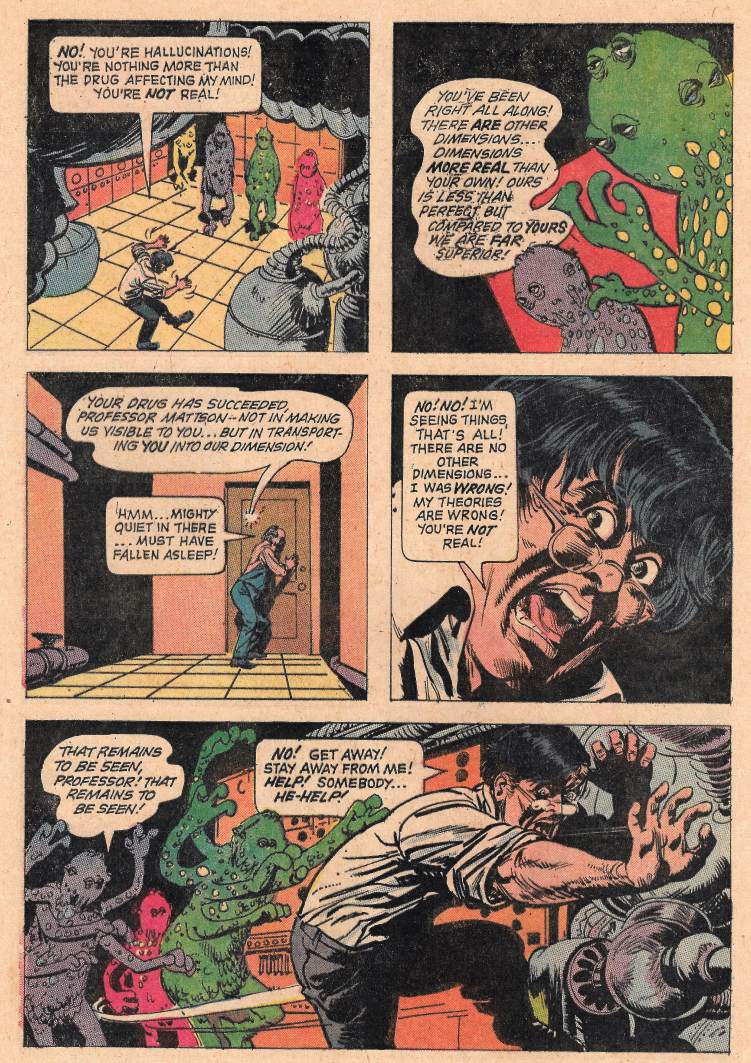 But wait. There isn’t even a remote chance of that happening.

Because no one from our dimension can see or hear the professor now…and the Mattsons have no intension of letting him go back. Ever! 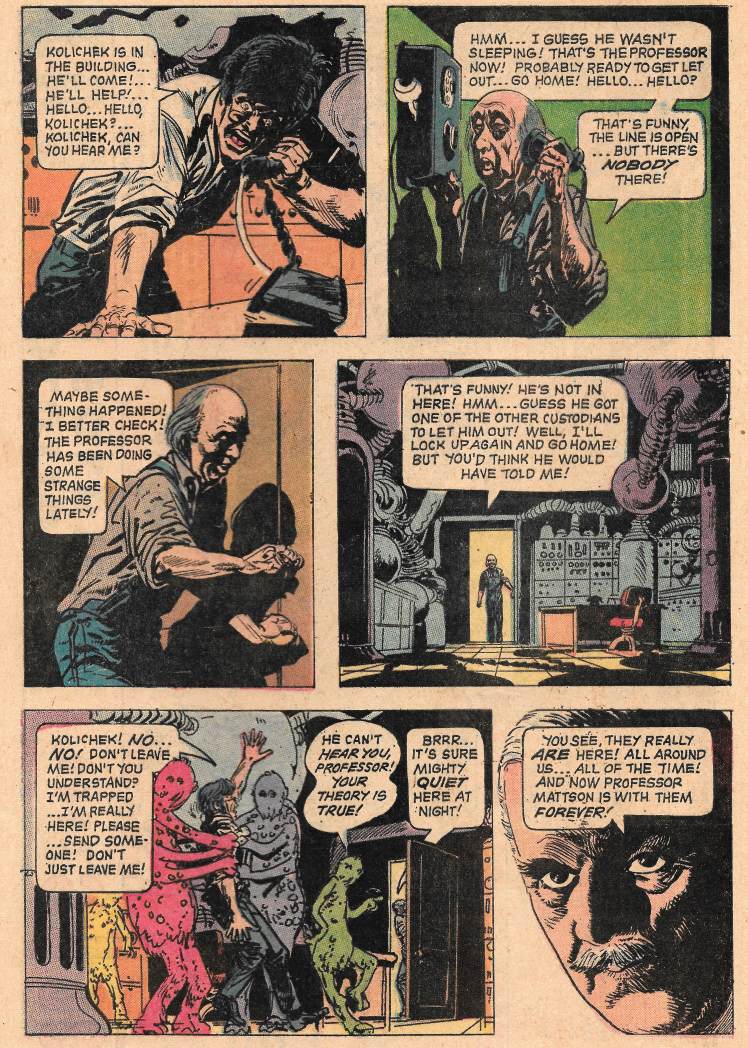 And that, children, is why you don’t do drugs or study abnormal physics problems.

I will say this: you certainly get your 15 cents worth out of this magazine. There were four complete comic stories and a full page text story. That’s a heck of a lot of horror. Even more so when you compare it to today’s decompressed storylines that take five issues to tell a part of one story. Just a bunch of stuff packed under one cover.

Perhaps that’s why the book had such longevity, lasting nearly two decades and featuring a lot of top tier talent before finally being put to rest. I’m glad I found a couple of issues for the Crapbox. They are a blast to read.
Posted by SonOfCthulhu at 2:23 AM