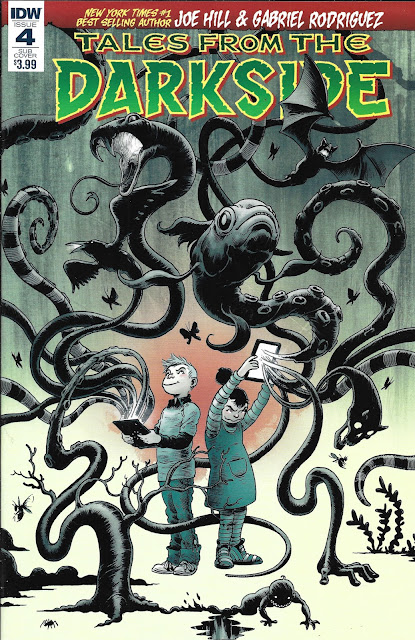 Hill and Rodriguez have fun with a TV Show concept

When we think of television horror anthology series, the first one to spring to everyone’s mind is usually The Twilight Zone. Rod Serling did not create this genre of television program, but it certainly seemed like he perfected it way back in 1959. It is a classic, and just as it was spawned from earlier shows like Science Fiction Theater and Tales of Tomorrow, so too did it create imitators of its own.

The Outer Limits, Tales of the Unexpected, Tales from the Crypt, Goosebumps, and even Serling’s own follow-up Night Gallery owe a tip of the hat back to the glow surrounding The Twilght Zone for making horror/sci-fi with twist endings look profitable, commercially and critically. The show set a high bar for others to reach. 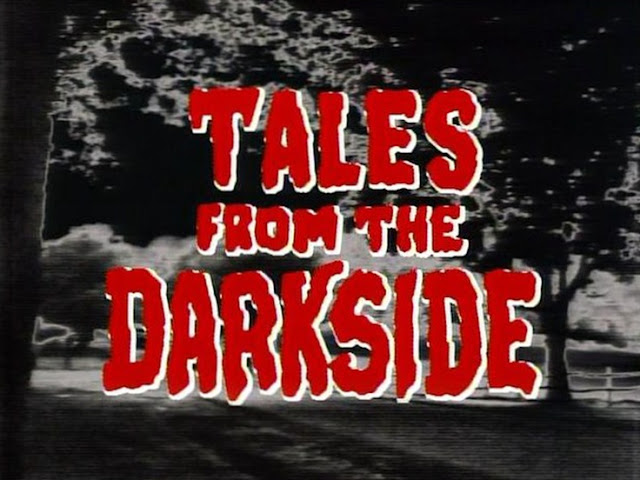 And while 1983’s Tales of the Darkside might have spawned more from Executive Producer’s George A. Romero’s Creepshow movie than Serling’s Twilight Zone, the genre it was attempting to revitalize was definitely cut from the same cloth. TftD featured half-hour long programs in the horror, fantasy, and/or science fiction wheelhouse with twist endings. They would occasionally toss in a humous episode here or there, just to throw you off guard. It attracted top-tier talent in writing, directing and acting. So the parallel is easy to draw. 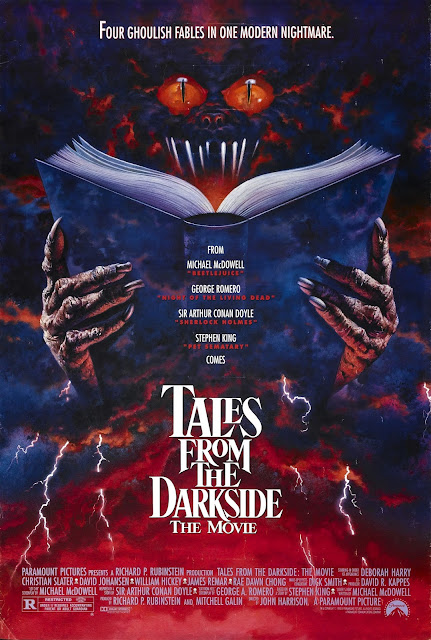 TftD even got a big screen adaptation in 1990, which Tom Savini dubbed “The real Creepshow 3,” the movie Romero was attempting to emulate when he created the TftD television series.

The series then languished for a bit before a Reboot was announced in 2013. Joe Hill (Locke & Key, Horns) was onboard producing scripts, with the ambitious hope of creating an ongoing narrative that weaved the separate anthology pieces into a larger, over-arching storyline. The pilot wasn’t picked up, however.

Hills scripts for the show ended up at IDW and we got a four issue open-ended mini series that shows the promise of what the new TV show would have delivered. The issue that the Crapbox ejected into my hot little hands was number four, the final issue and it would have made a decent TftD episode. Here he’s teamed with Gabriel Rodriguez again, so the art will be great. Can’t wait to dig in? Me neither. Let’s get to it, shall we?

For the record, I was a fan of TftD tv show and liked the movie quite a bit as well. For our comic, we have this as our opening after a brief paragraph on the fly page that states there is a man falling between dimensions due to his experiments. He is following a great evil, but unable to stop.

This was the “ongoing” part of the narrative, and it is so slight that it is almost unnecessary. TftD never needed a “reason” there was evil present in whatever mystical, supernatural, or magical way it was presented in the story. It just WAS, and that was fine. So, when this story begins with teenager Joss’s phone going crazy in her car… 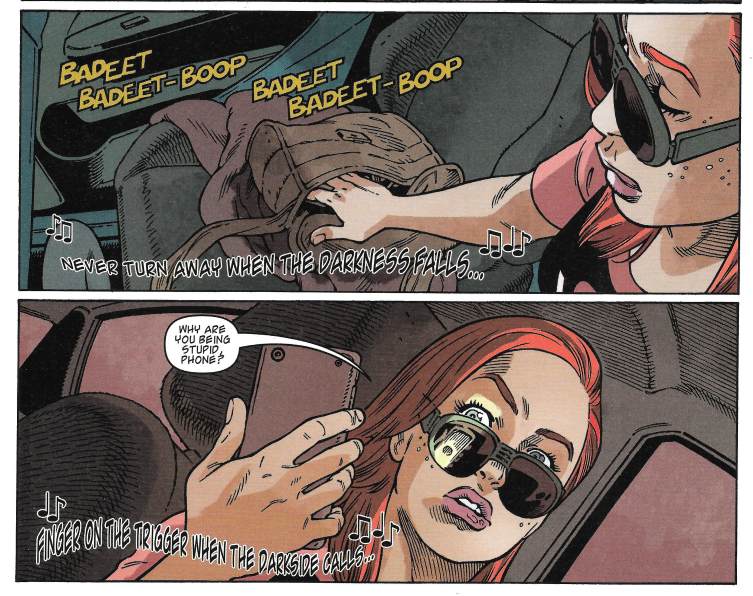 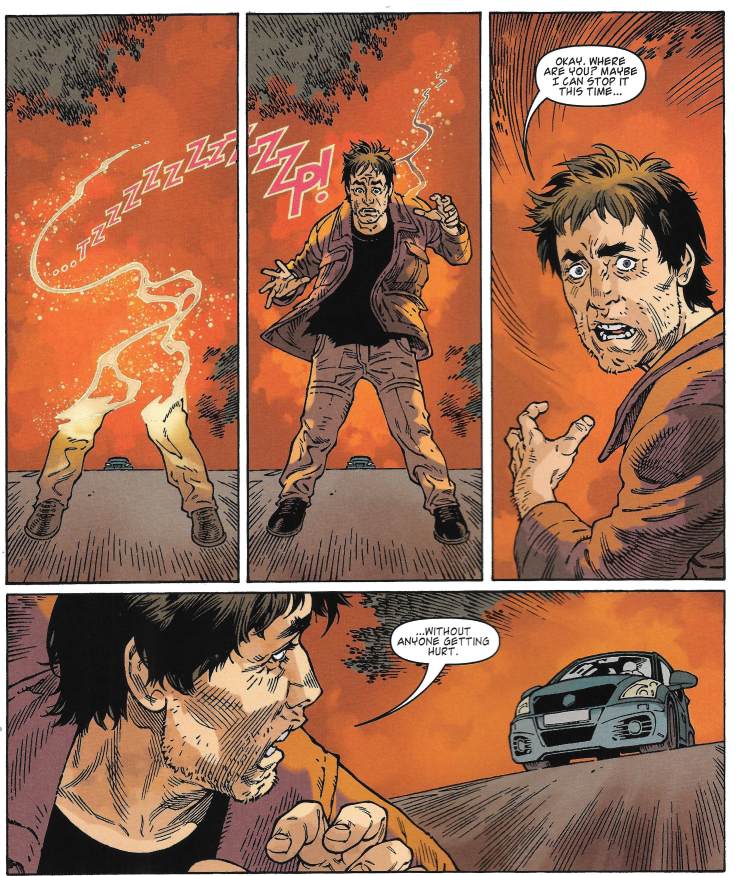 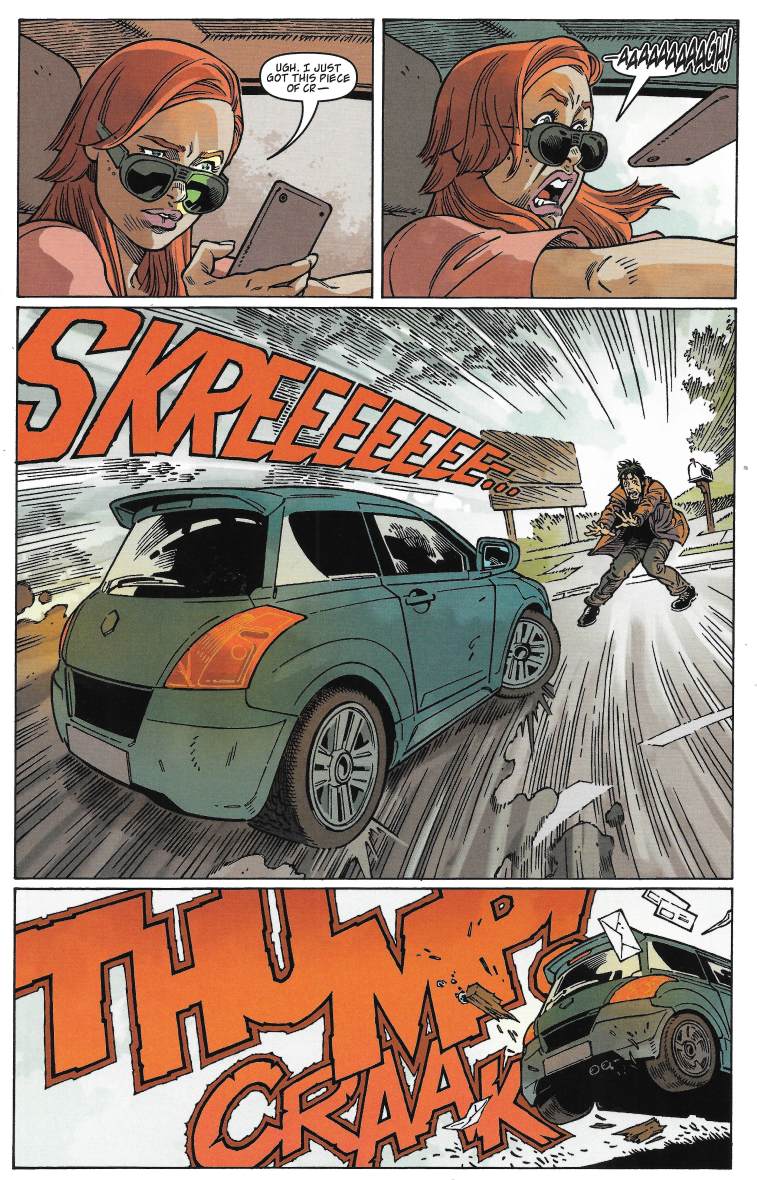 …wrecks these new homeowner’s mailbox. Especially since the scientist vanishes in a puff of green smoke and smoldering soot stain. The tale was just fine as a teenager looking at her phone at the wrong time and crashing her car. 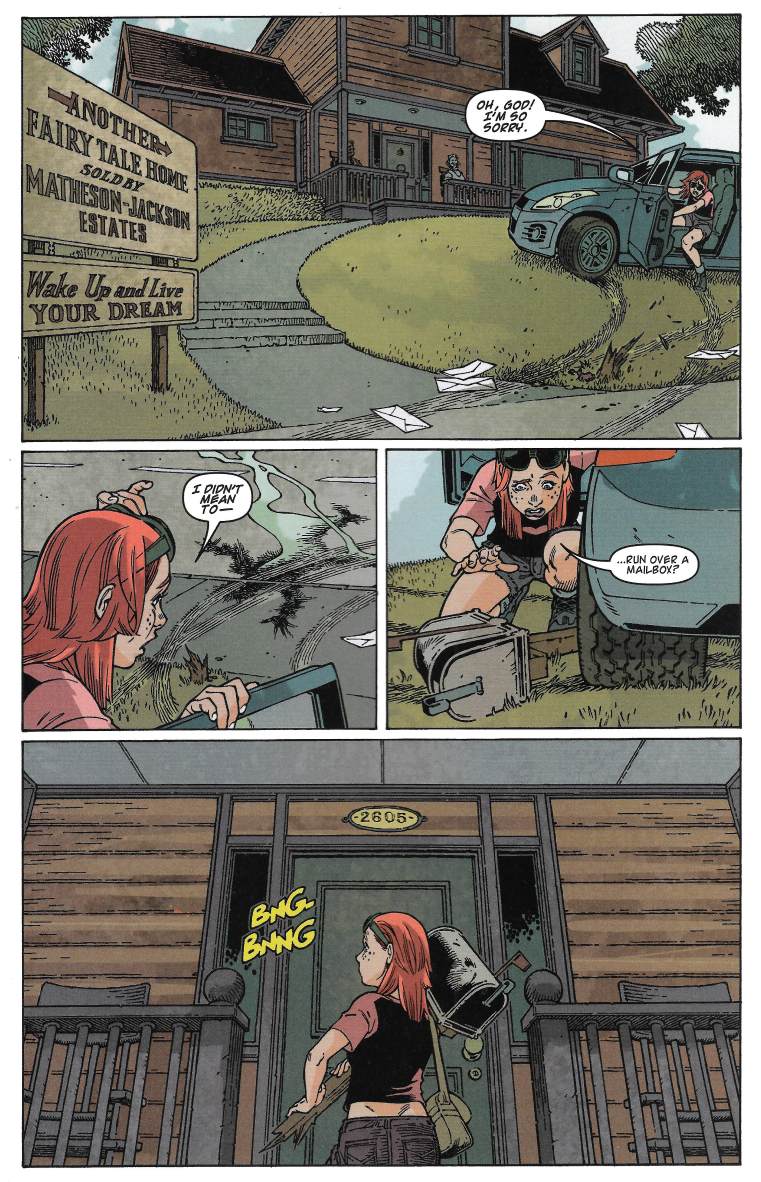 But whatever, multi-issue story thrust. You are out of the way now. And we have our protagonist on the porch holding a busted mailbox, exactly where we wanted her. In extraordinary and unexpected danger. 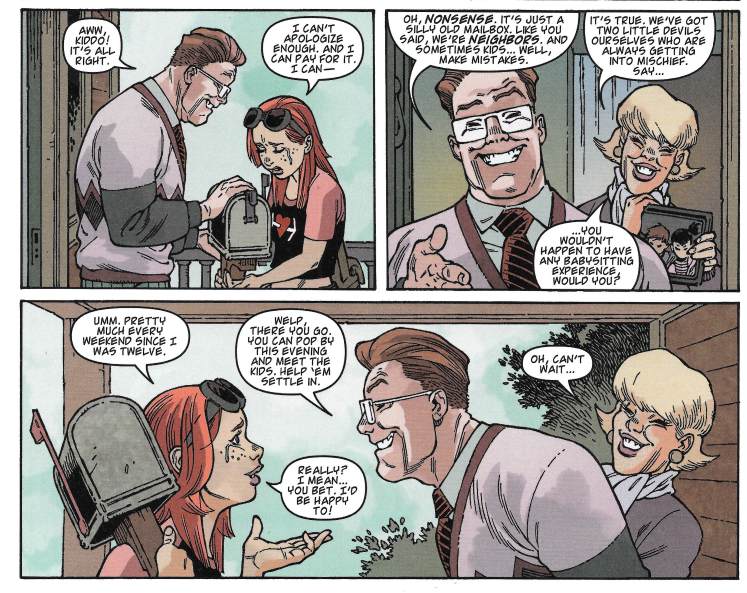 Although at first it seems the only danger she is in might be of being blinded by the couple who bought this house’s overly broad smiles. I’ve seen less teeth in a killer shark movie than is being shown in those three panels.

But, this does give us our story framework. Our teen girl will pay for her crime by baby-sitting the couple’s children. Easy, peasey! 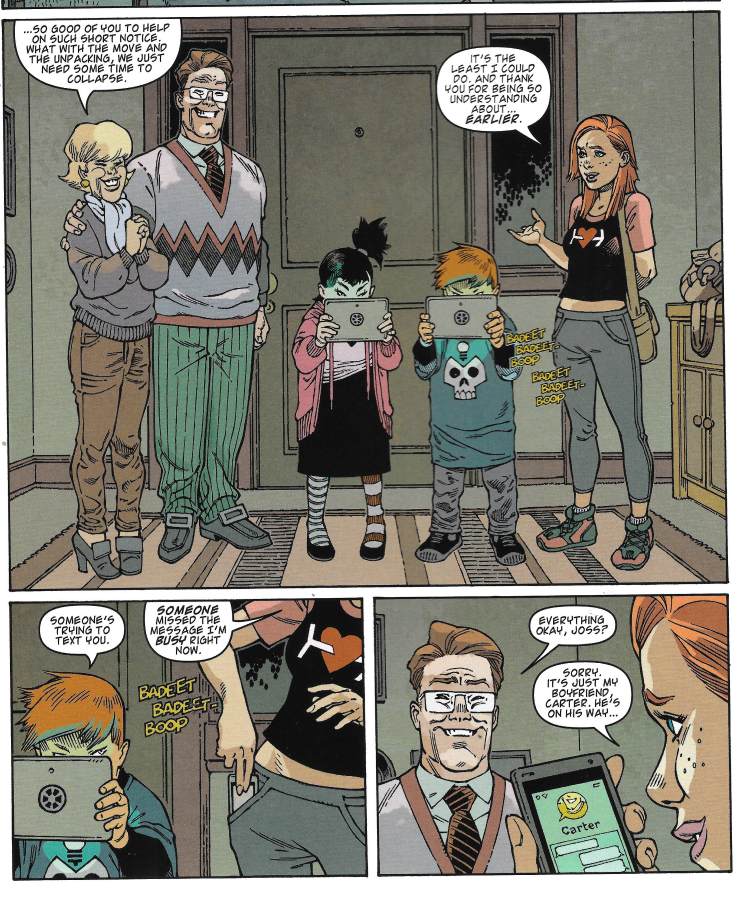 I found it odd the parents didn’t mind her boyfriend showing up, but then they rattled off that they needed their router setup and the boyfriend was a tech genius, so that made sense. The Mother even says that Pam and Ward can turn into “absolute terrors” if their devices aren’t connected.

Rather odd turn of phrase, that. As is their farewell. 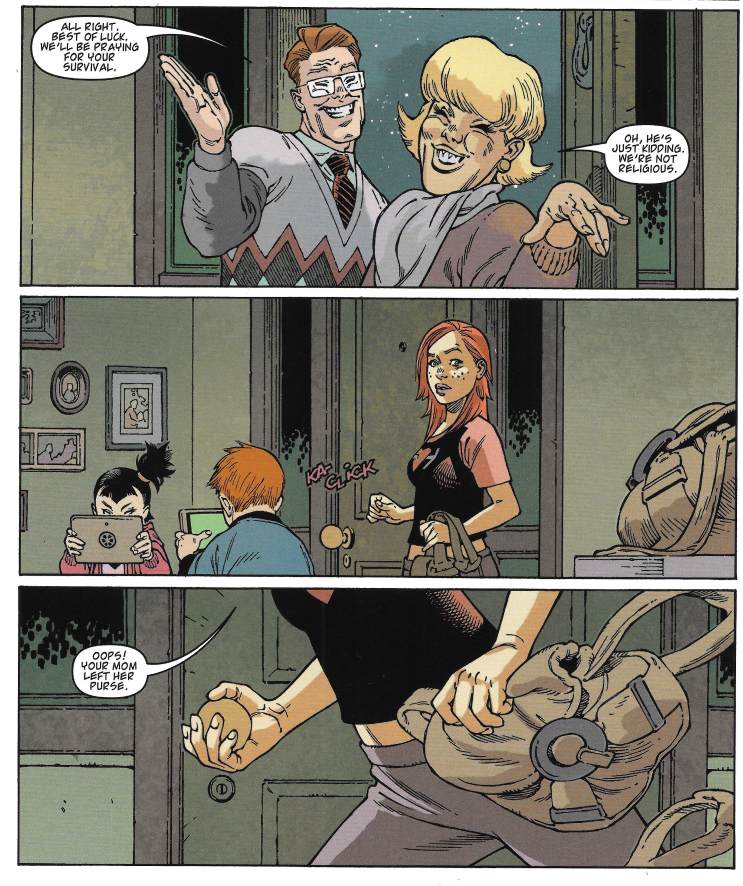 And to turn up the creep factor, Joss goes to catch up with the departing couple so they have the woman’s purse with them…

…and they have vanished without a trace…

…although the audience gets a clue to their whereabouts… 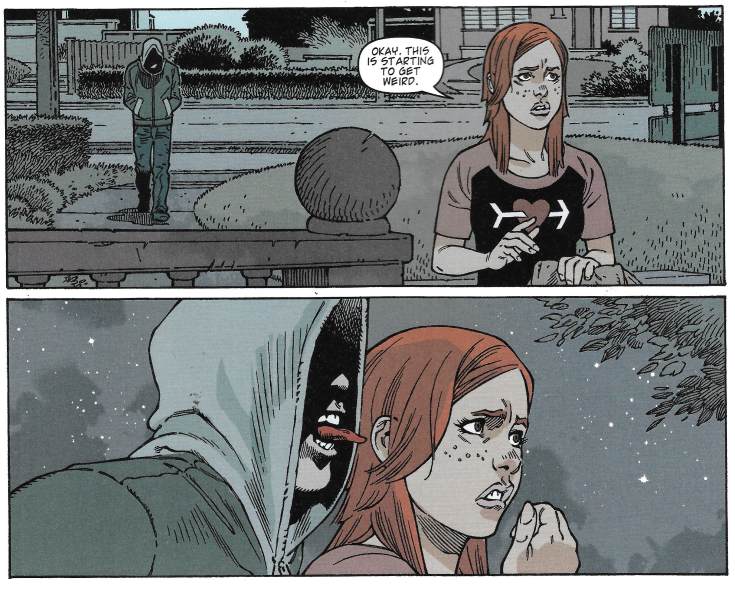 And maybe Joss does too, but she is distracted by this creepy fella… 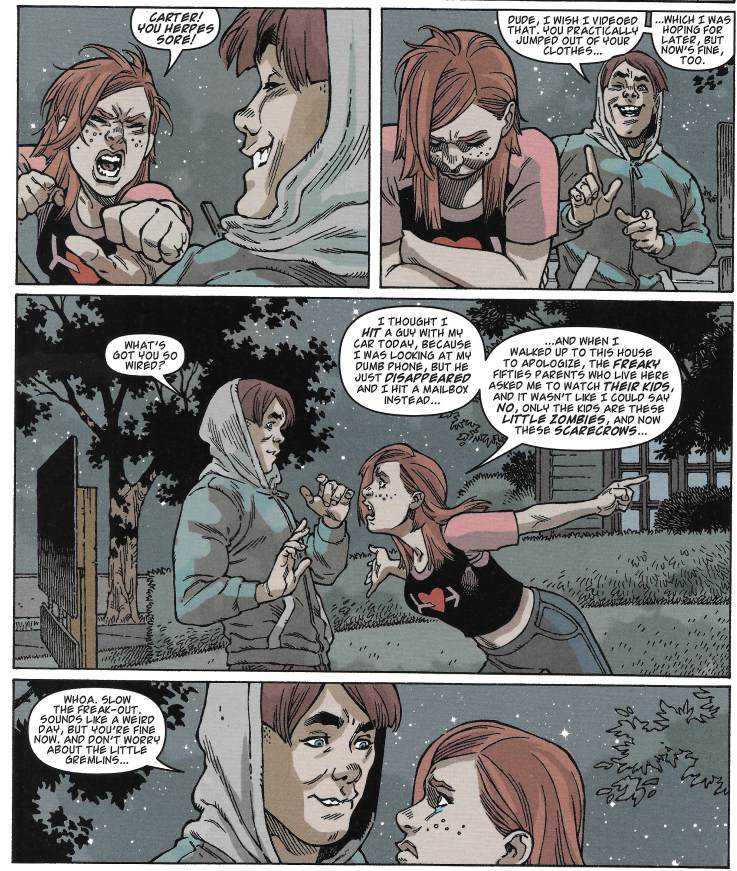 …who ends up being her boyfriend just acting on rude hormones. Joss lays into him and we realize she’s picked up on all the same clues we have. Hopefully, Carter can be of some use here for more than just hooking up a wifi router.

Carter appears to be a mite taken with the little zombie's iPad knock-offs, that are truly “next generation.” The kids seem fond of one application in particular. 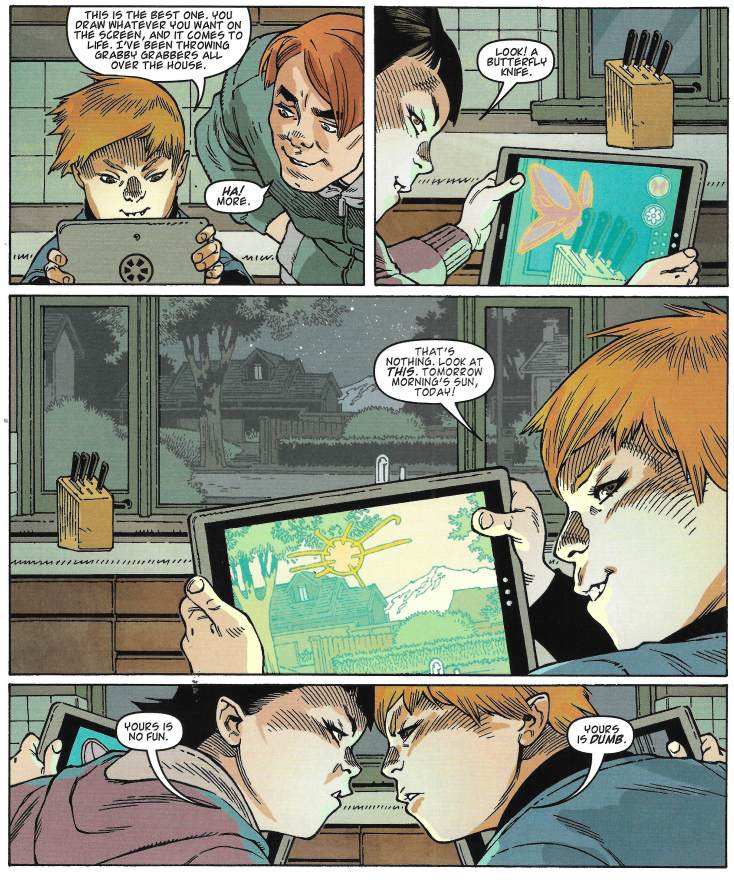 And heaven forbid you try to take their electronic pacifier away. (These are just like real kids, no joke!) 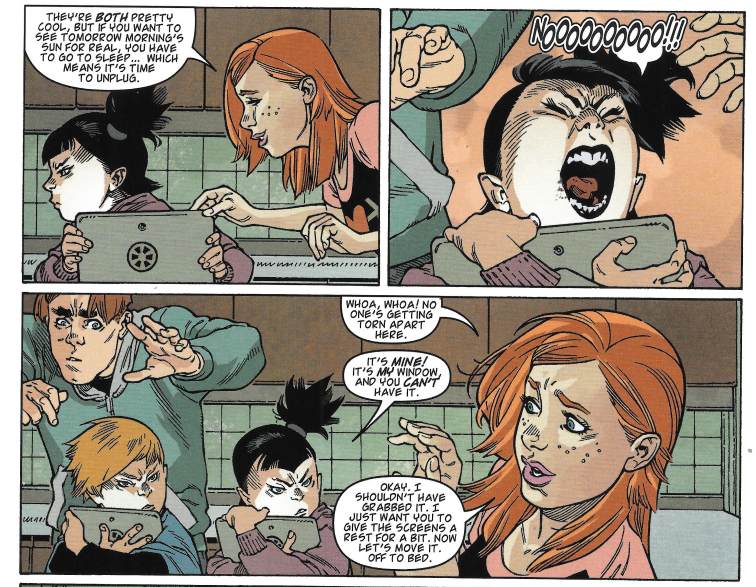 However this earns them a march to bed…and earns the kitchen an unexpected makeover as everyone’s back is turned. 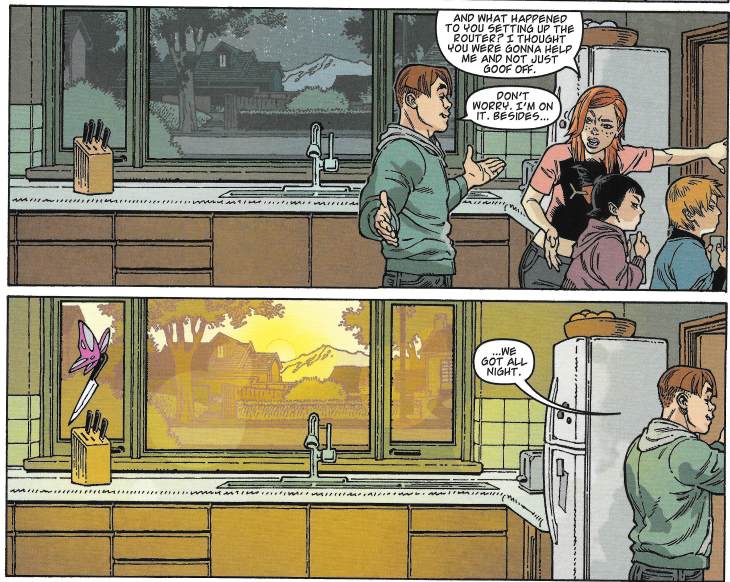 The kids are the real evils here, as we now understand exactly how the parents are really scarecrows and the danger our young babysitters are in, even if they don’t. Here’s Carter, about to get all Cthulhu’ed up, if he isn’t careful. 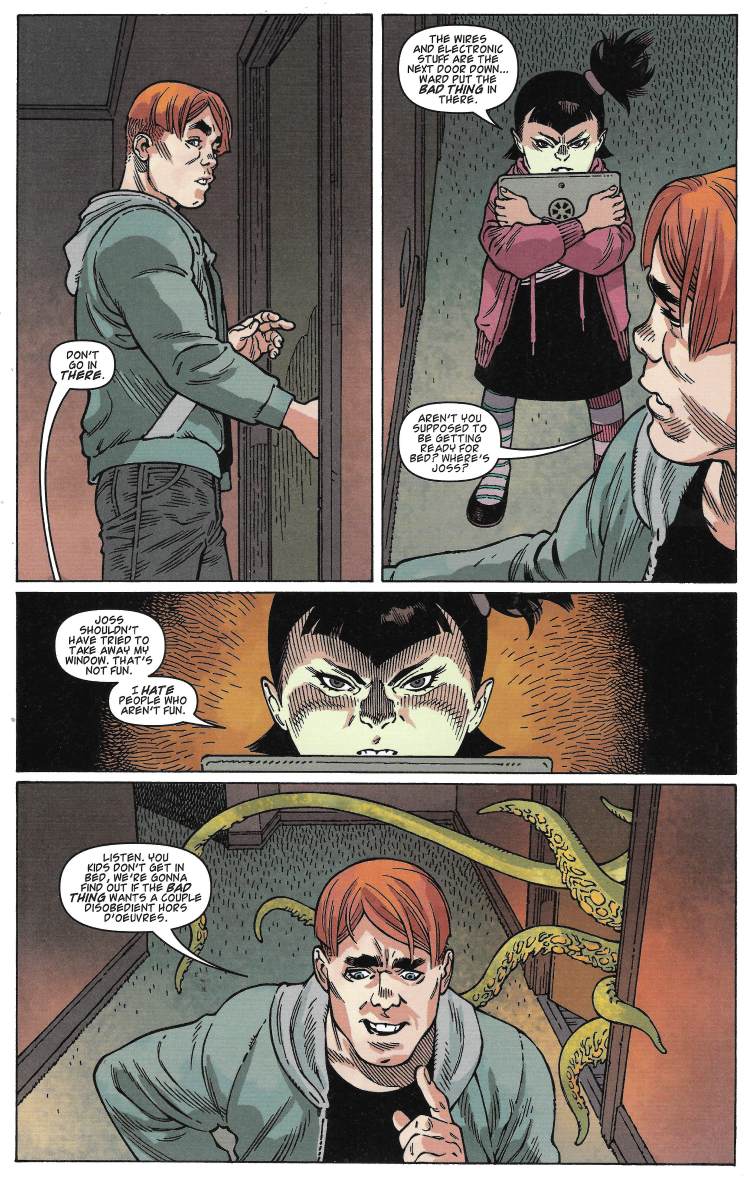 Meanwhile, Joss finds getting fresh sheets a bit more dangerous than anticipated as she is attacked by the butterfly knife. 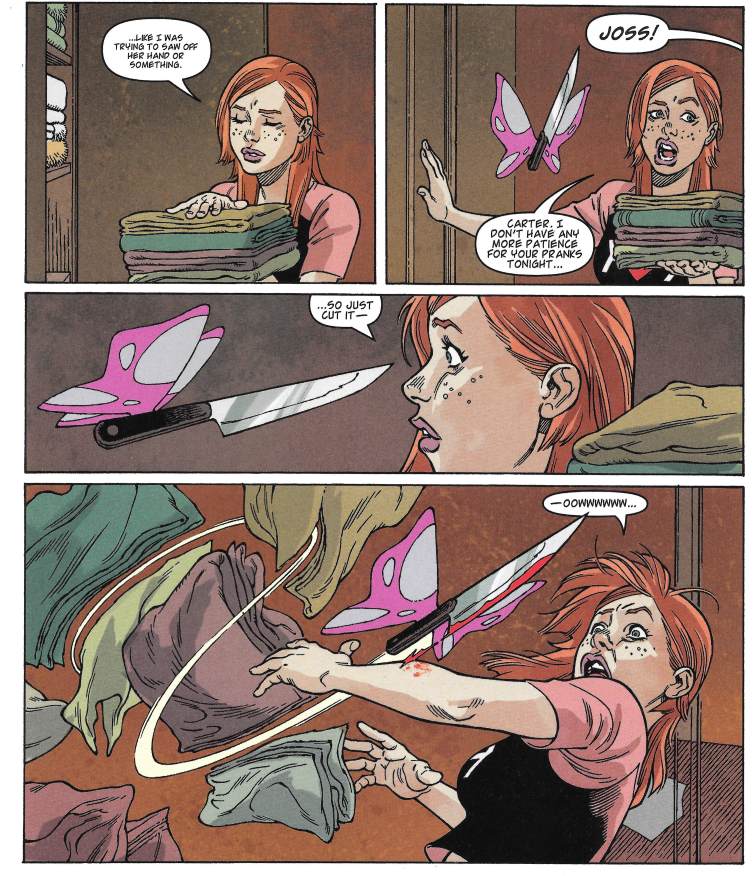 Carter is about to be tentacle-raped but good it appears, and his screams have brought an audience. A very passive but interested audience. Those little shits. Lucky Joss is faster than any cutting board insect, arriving just in time to save her boyfriend and make a stand against the evil little screen junkies. 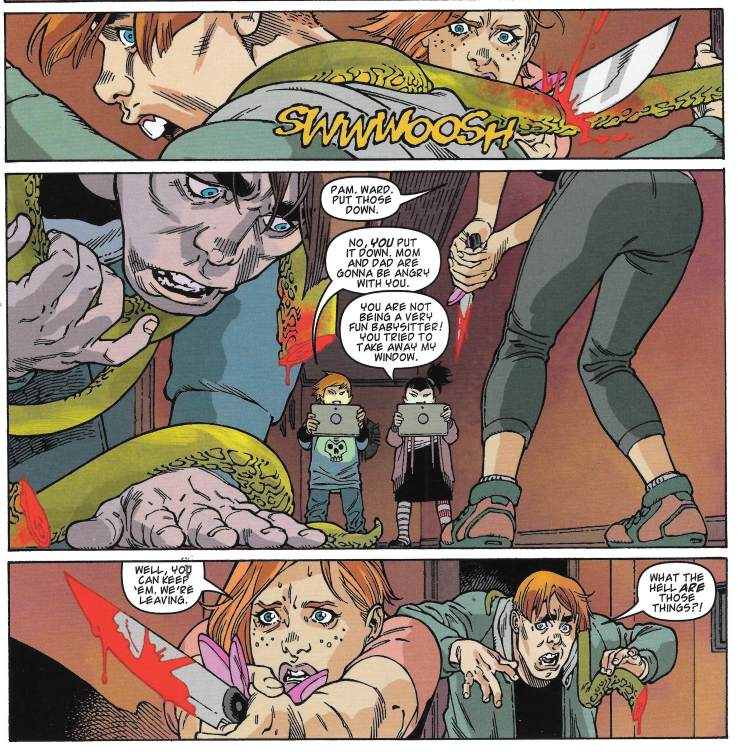 The pint-sized terrors are so bad they even start monologuing (while waking up the completely fake parents). 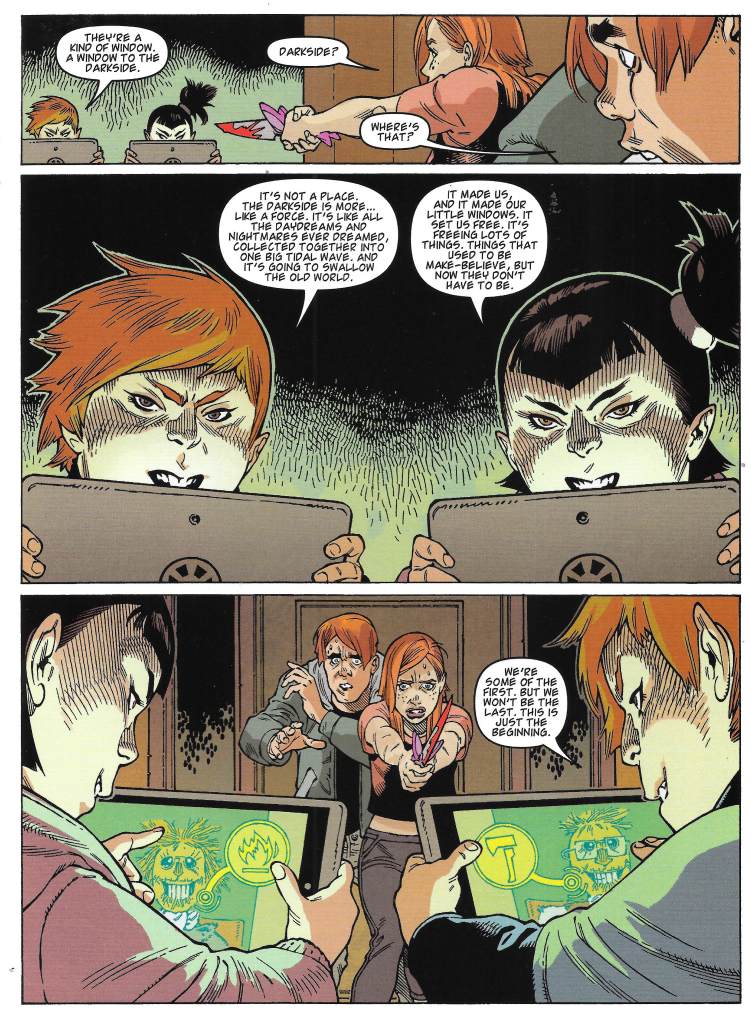 Joss and Carter find themselves locked into a house that is on fire and spouting arms while they are being hunted by evil murderous manikins of Joe and Suzy homemaker. Rodriguez does a lot of great stuff here. 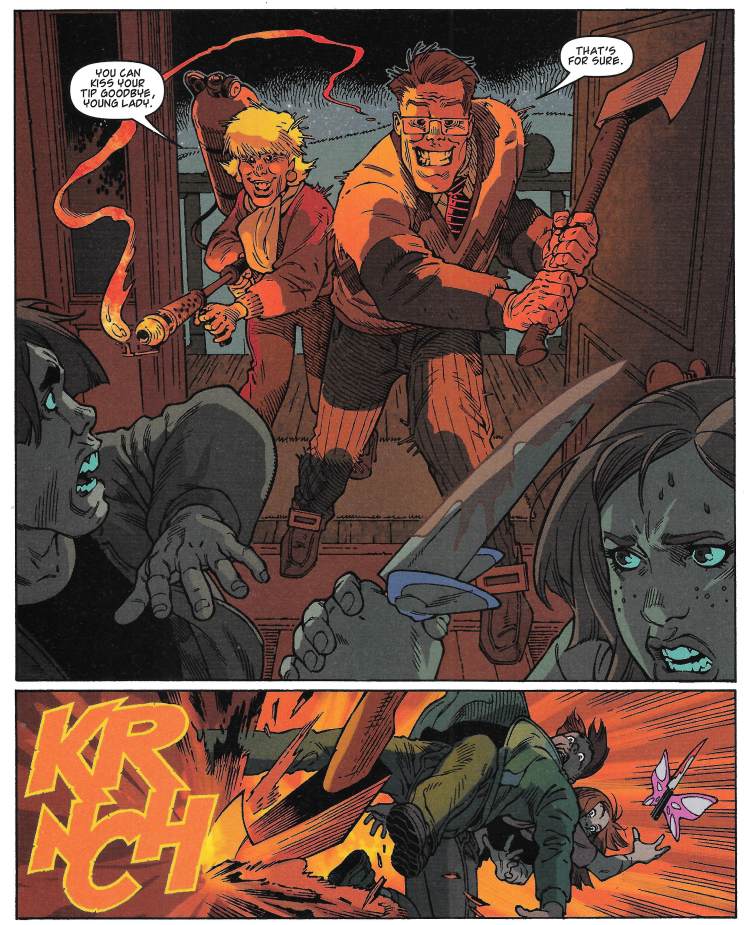 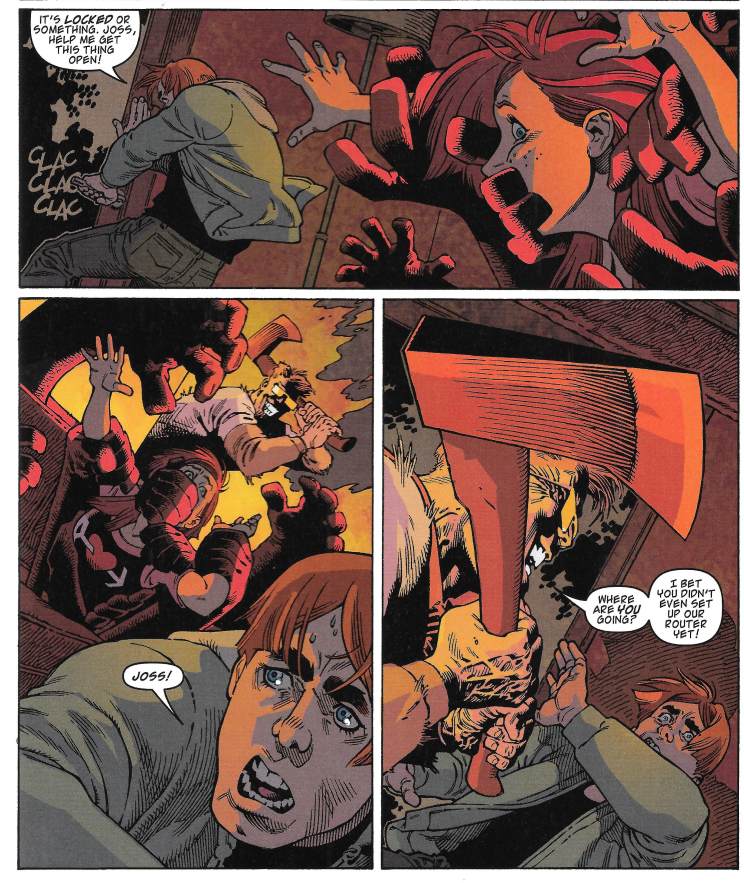 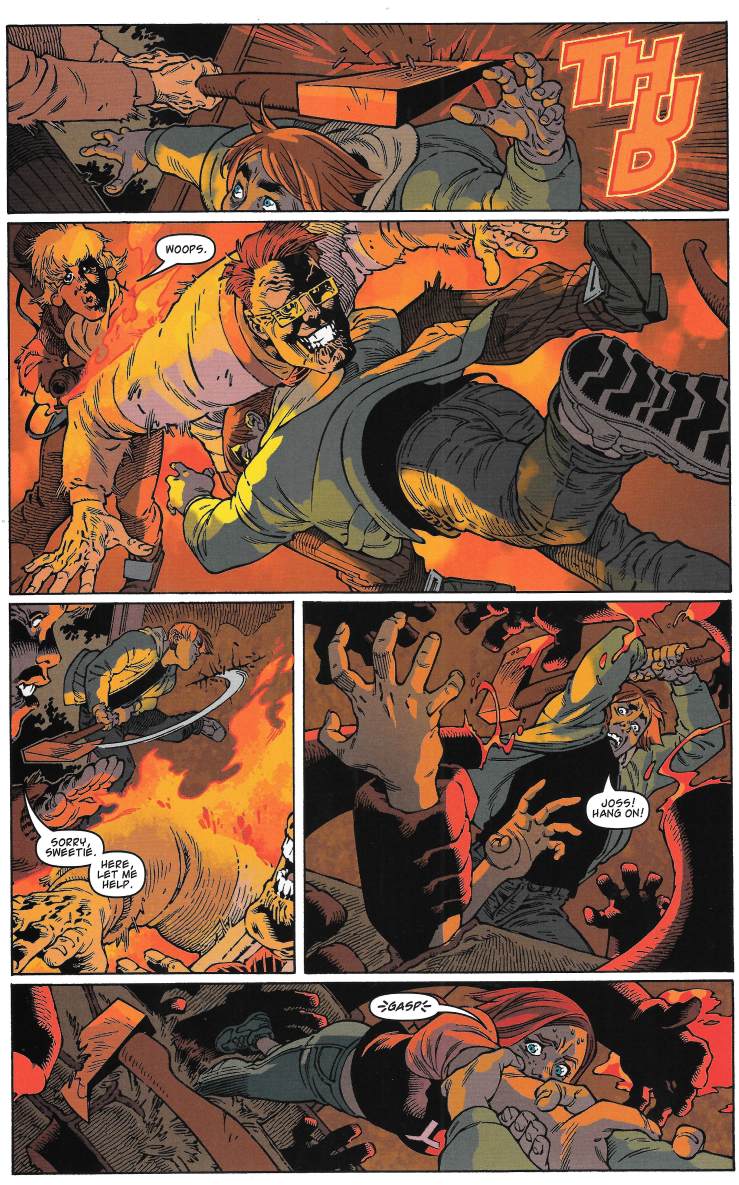 The couple finds themselves back in the kitchen, now full of blistering daylight, care of the window into tomorrow. A window that they use as an impromptu escape route. 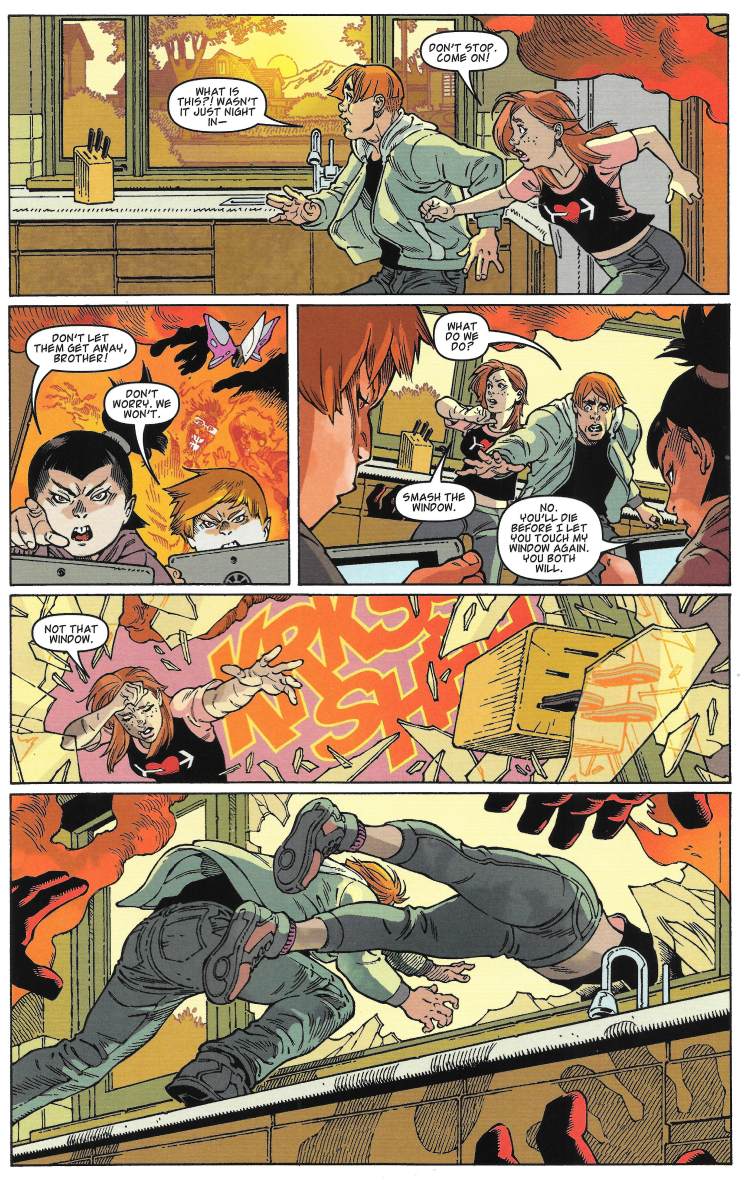 They land in the next morning, safe outside the ruins of a burnt out shell of a house, lucky to be alive. Joss asks a nearby fireman if anyone made it out alive. He says that no bodies were discovered inside, so it must be a “happy ending.” 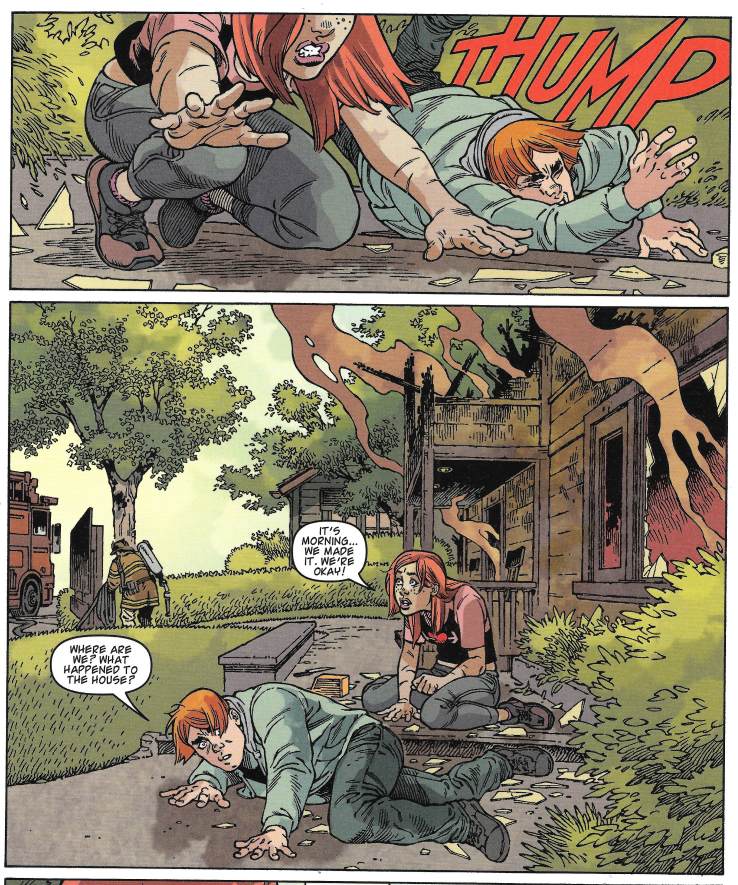 As for the children’s ending… 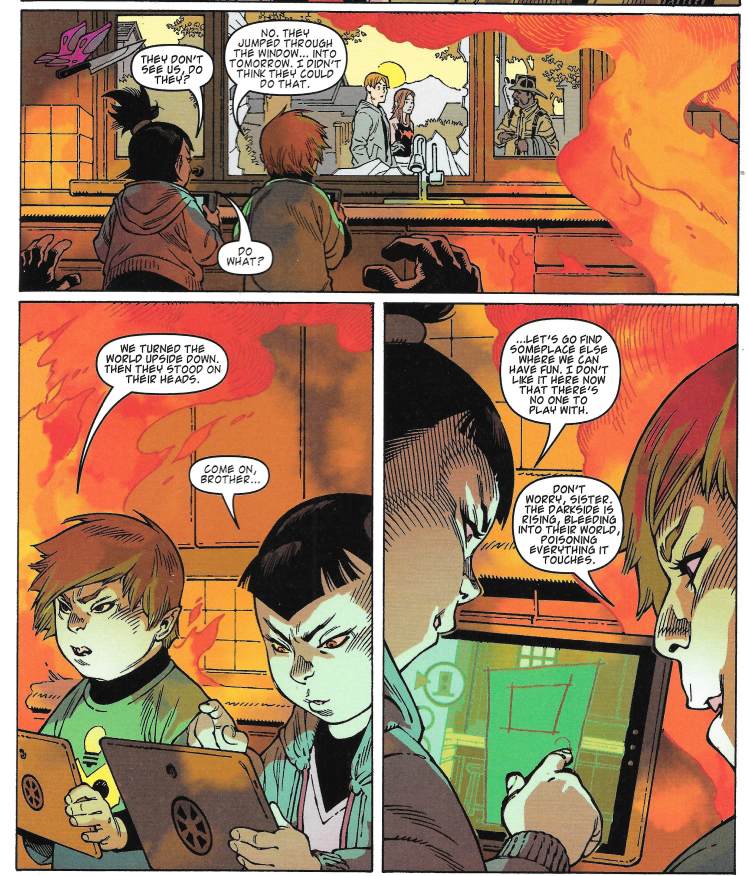 …they move on to where the next part of the anthology would take place with an outro worthy of the television show. 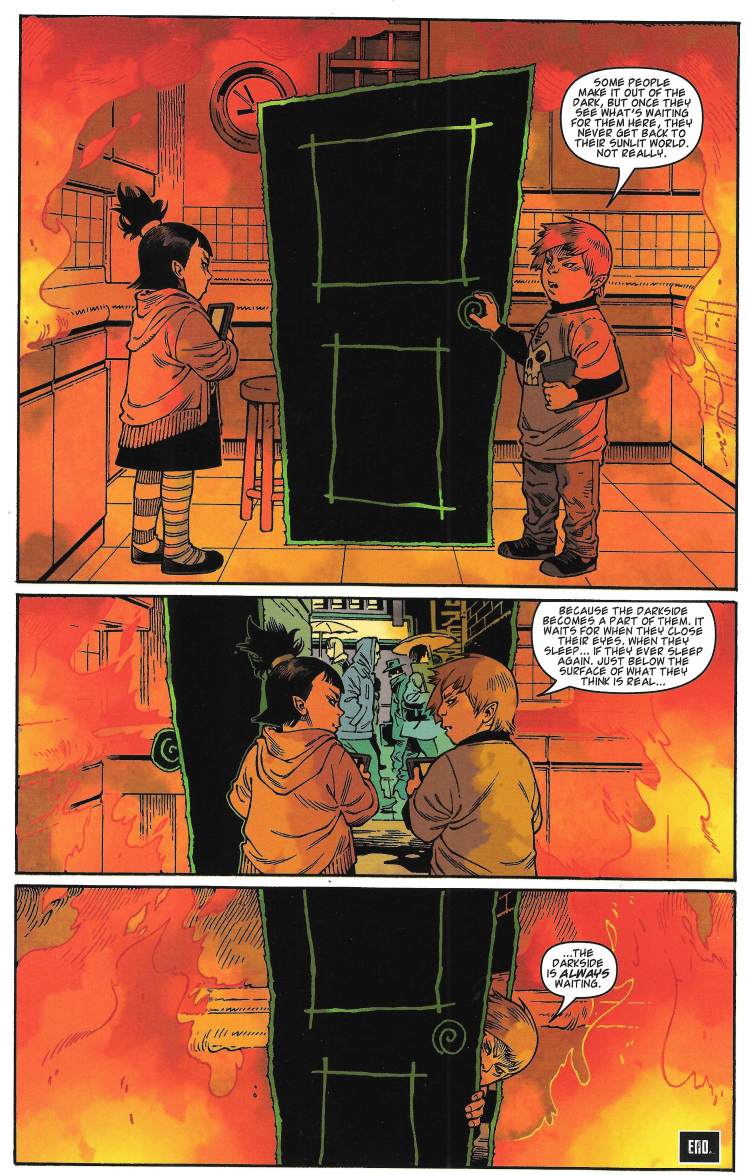 And that was it. The revival of the show died and the book didn’t reappear. As oddly limiting as tying the open-ended show to a specific plotline of fighting the nebulous darkness would seem, this book satisfied. It might not have without Hill and Rodriguez’s involvement, but that is something we can only speculate about.

As for now, the Darkside is at rest and any tales it might tell are whispers you hear when your eyes are closed.
Posted by SonOfCthulhu at 2:15 AM