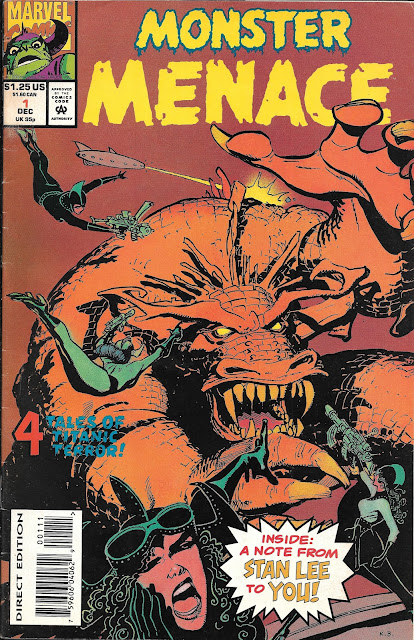 Marvel dipped way back into its vault of 1950’s monster tales to reprint some classis in the four-issue series called Monster Menace. Never one to turn down classic Stan Lee collaborations with Jack Kirby and Steve Ditko, I snatched this up from the dollar bin, toot-sweet.

This four-pack of stories came before Atlas comics changed its name to Marvel, in the pre-code era. Atlas fought off closure by continually shifting the focus of its lines off books. After a stint of regular horror books did well, Lee noticed the trend had peaked and turned his creative team to writing giant monster stories. We ended up with quite a few grand Marvel tales that read much like the science-fiction movies of that same time, full of cunning scientists saving the world from destruction by terrible titans.

There is one standout in this issue, a reprint of a Lee-Ditko collaboration of The Terror of Tim Boo Ba, a classic Marvel Monster tale that is as near perfect a Deserved fate tale as one gets. The other tales are still amazing in art and story respects, however are limited by the prevailing plot devices of the time they were created.

Allow me to show you just what I mean… 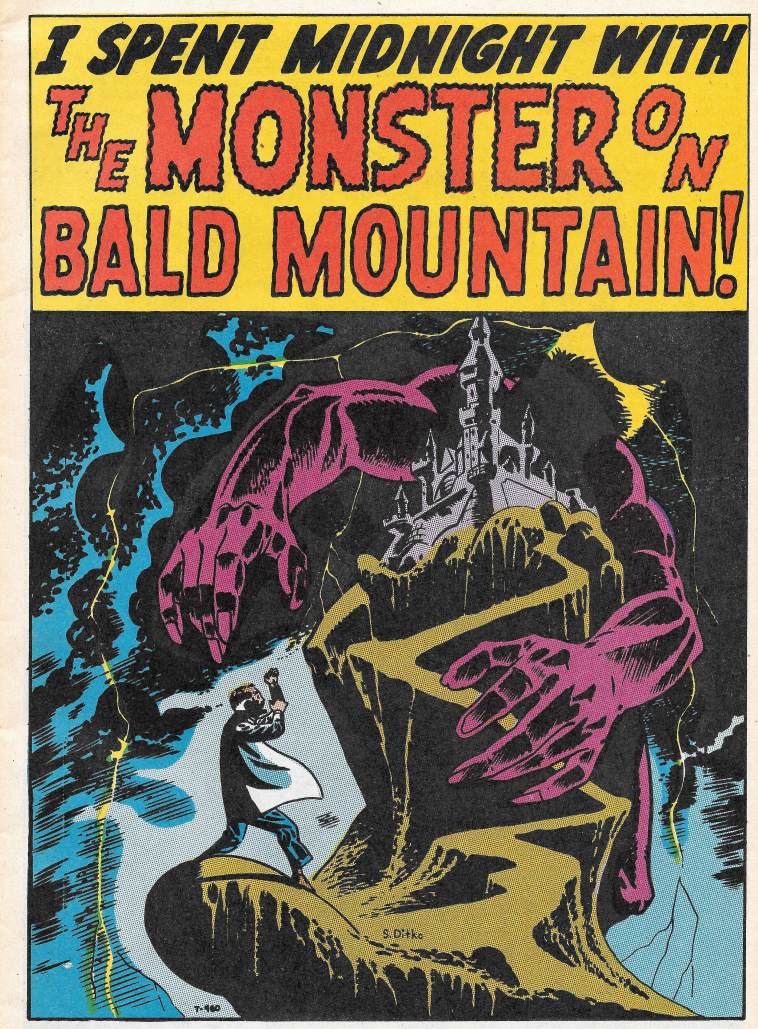 I love that these old stories would have an opening splash page to announce their arrival. Greatly enhances their drama and power by placing a huge poster style graphic as an introduction.

This tale by Lee and Ditko is kind of a Frankenstein type of story with a sculptor secluding himself in a remote castle to create his greatest work: statues depicting the eternal struggle of Good Verses Evil. 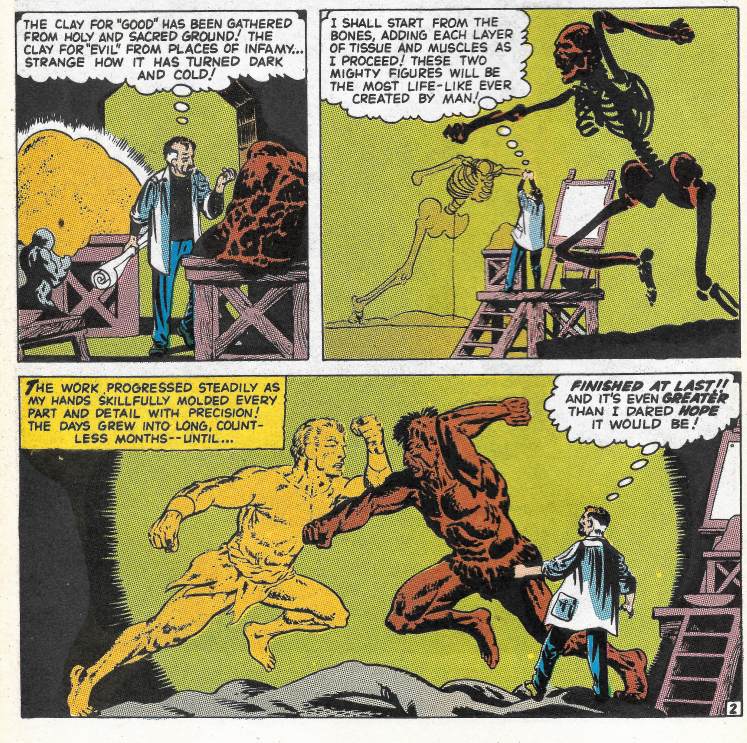 Um…I don’t really think sculptors start models as fully articulated skeletons. I mean, MAYBE they do, but I find that highly unlikely that the go into details such as knee bones. But whatever! He’s made his masterpiece.

A masterpiece no one will see, as lightning strikes the Evil figure, bringing it to life. At this point I need to ask what was in that clay. Or how much LSD did the artist drop before starting this project? 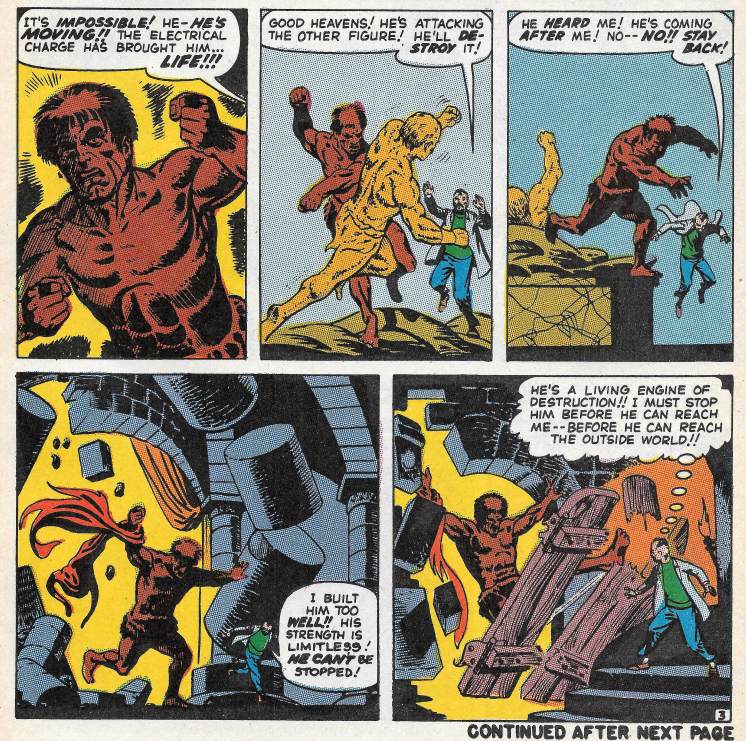 Anyway, the Evil statue appears to actually BE evil, and chases our artist through the castle, busting down doors and knocking over columns as it goes. 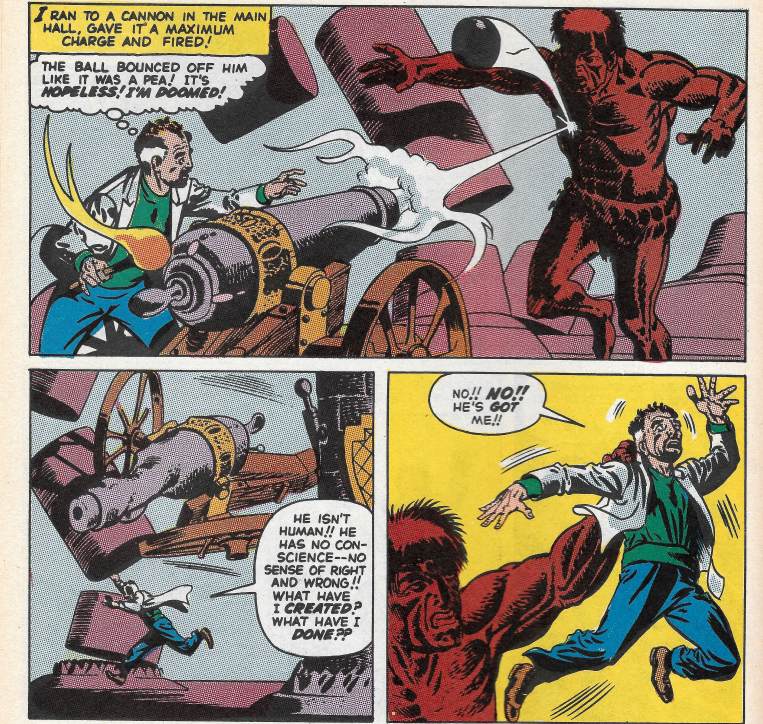 Giving up on running away, the artist makes it to the top of the castle and uses the cannon on the clay giant. It is no use, however, as the cannon ball just bounces off his chest. Evil destroys the weapon and nabs our poor sculptor.

But just before he can hurl him off the castle to his doom, the other statue shows up. Evil pitches the man at the Good statue… 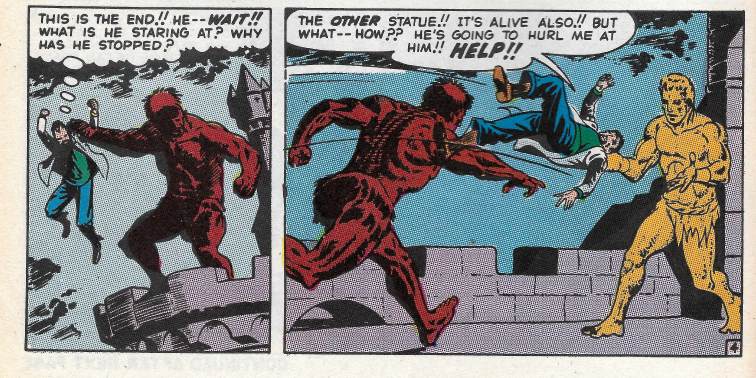 Who catches him and sets him down gently. Then begins a titanic brawl between the two blundering battlers (see Stan, even I can do “bombastic”) that ends with them tumbling to their doom and destruction. 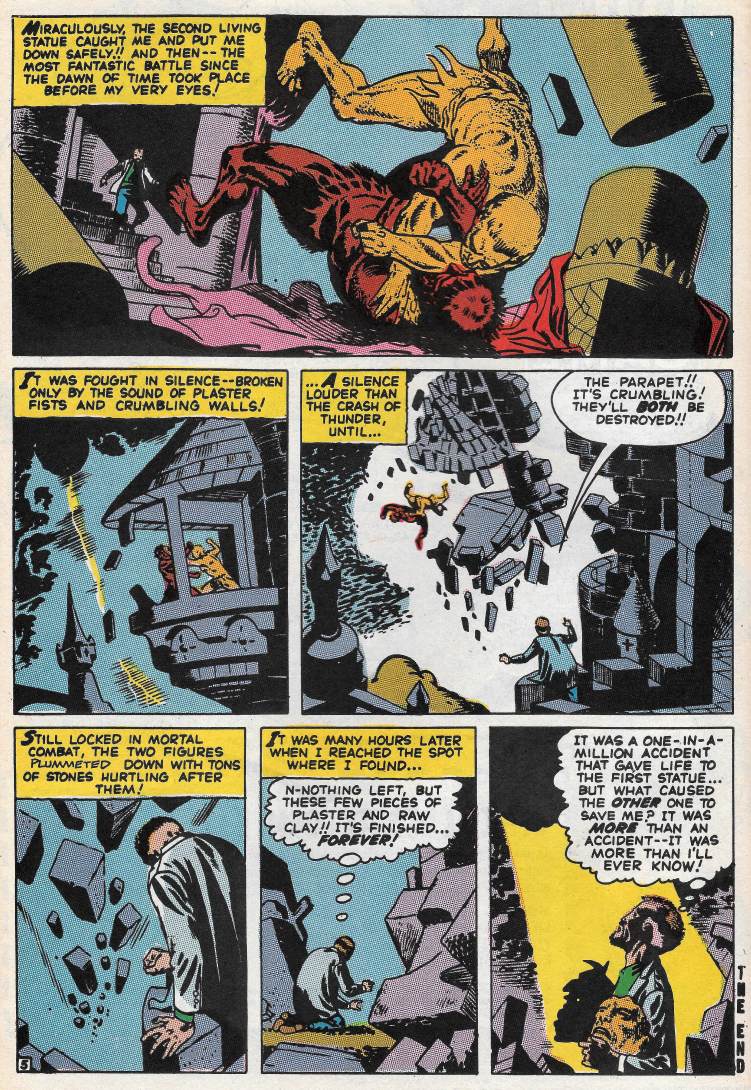 I didn’t think much of this tale. There is very little emotional investment in the outcome as our sculptor protagonist wasn’t fully developed. Beyond wanting to create something, we aren’t given a chance to know him. The events that made the other statue live were not explained, not that "lightning strike" is a very good reason for the first one’s animation. It would have been better had we learned this was all in the sculptor’s mind or that the statues represented an internal conflict he was having over some temptation to do bad in some way, thus putting an ideological contest into physical turns. But no, just giant statues beat each other up.

I will say that putting this one first set the level of expectation of the stories to come at a low bar to meet. 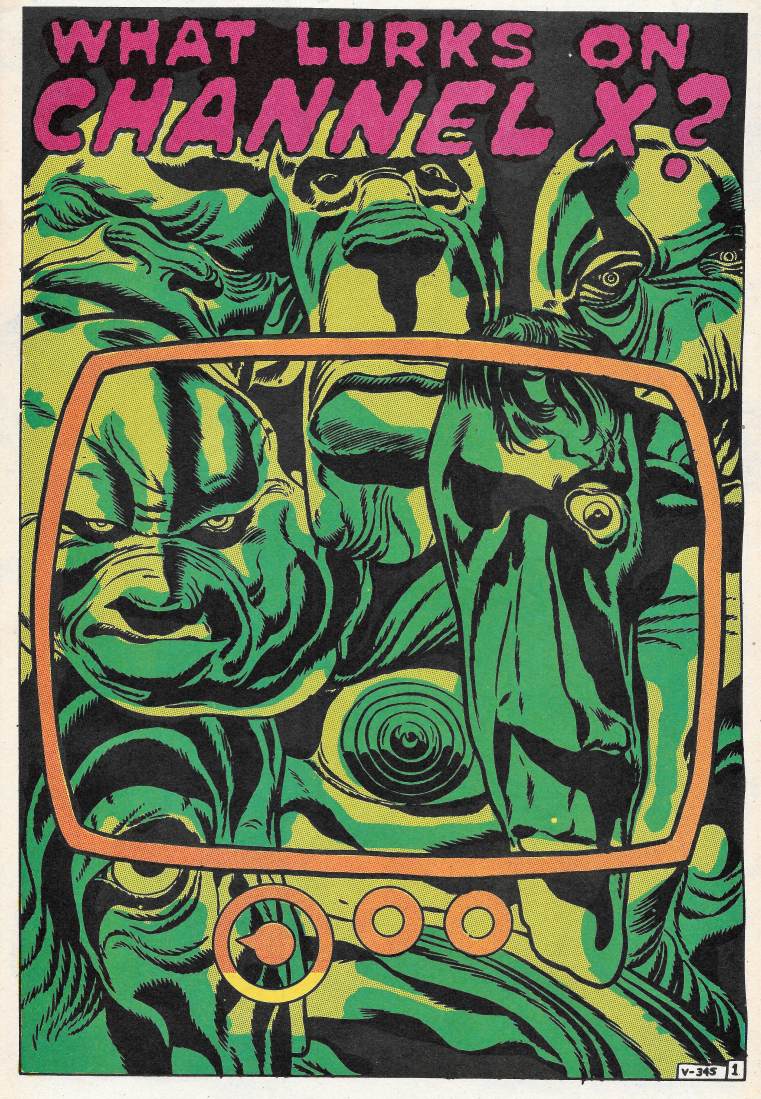 Thankfully things get better quickly, starting with this piece from Kirby and Lee, inked with flair by Ayers.

We begin with a couple living in a crummy apartment ruled over by a lousy, restrictive landlord. 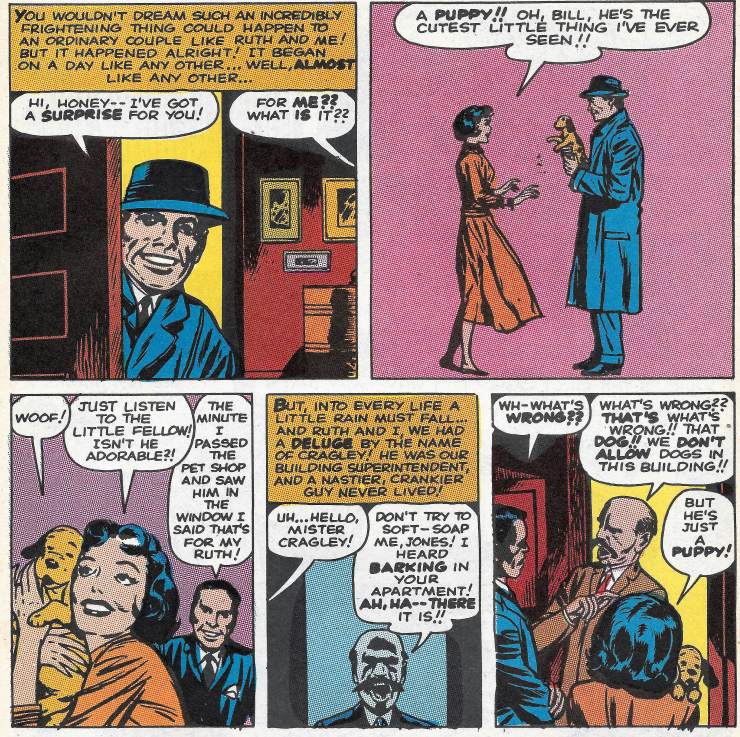 Much to the chagrin of the couple, the puppy has to go. However when a door to door salesman arrives hocking free cable TV, the couple happily accept, thinking it one thing the landlord can’t restrict them from. After a quick hook up, they are ready to check out The Honeymooners…or whatever was showing in the 1950’s. 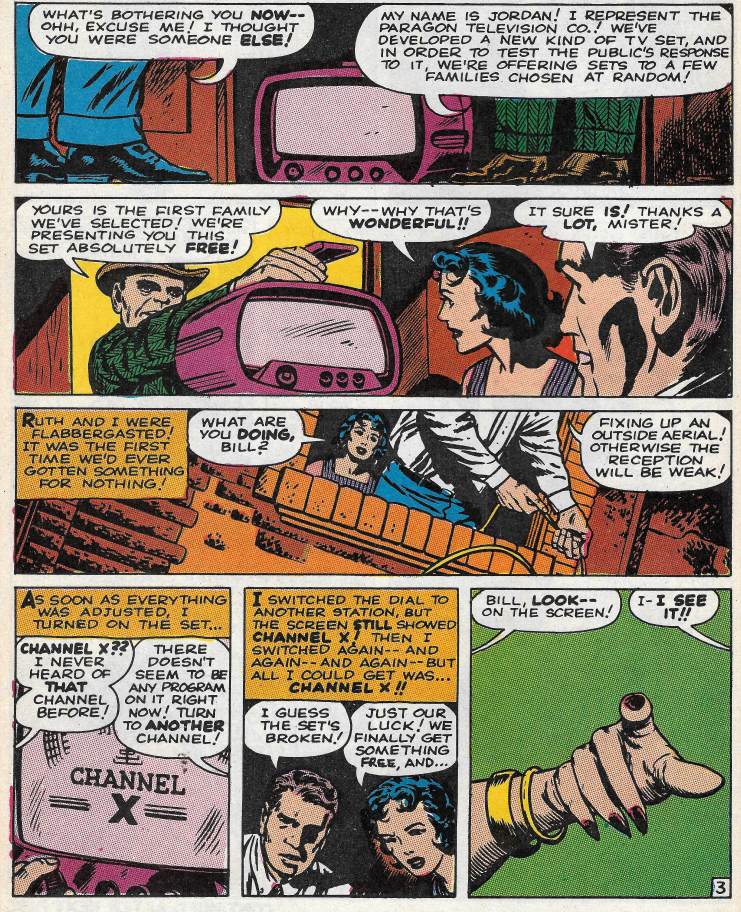 What they weren’t expecting was to be hypnotized. Dun-Dun-DUN! 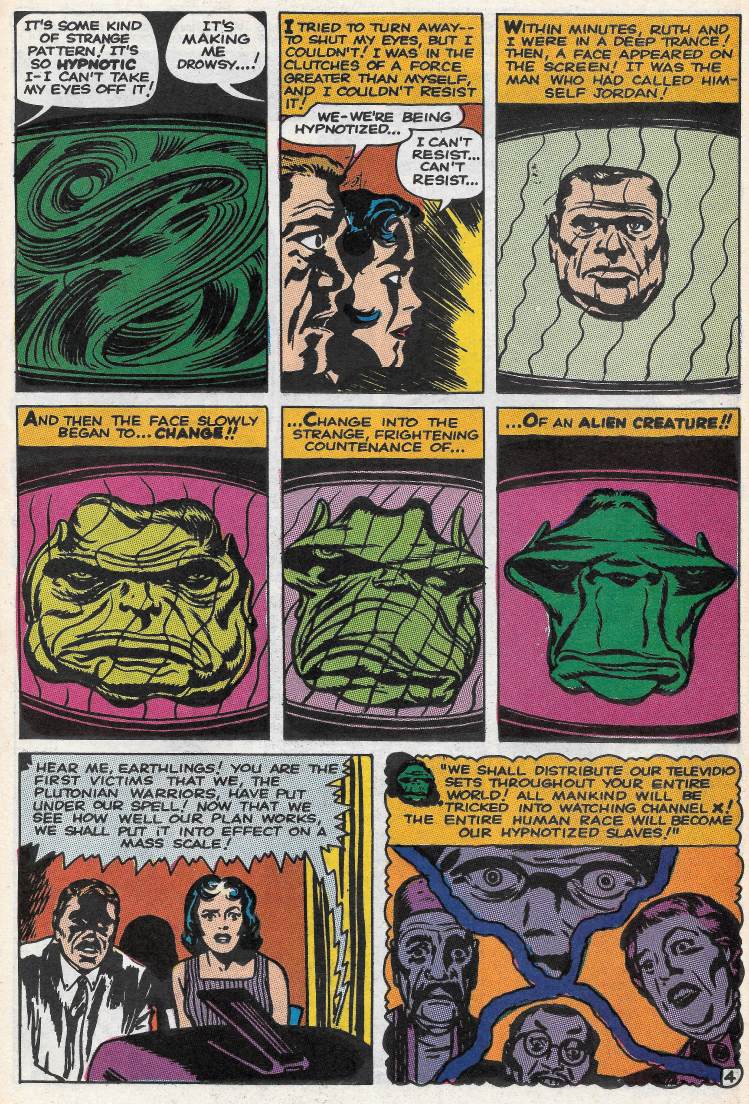 The aliens appear to feel the need to explain their entire evil plan to the audience, with exposition and pictures to boot. 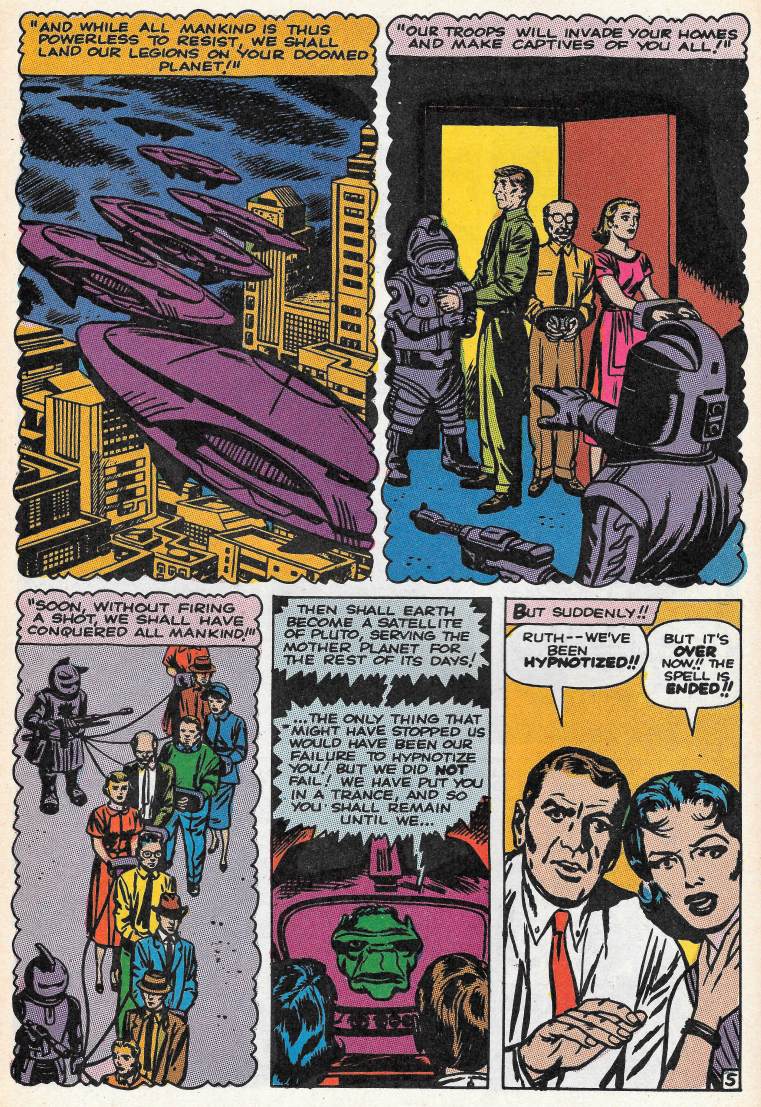 But just like that, the hypnotism ends and the male smashes up the TV set with an axe. The aliens are quite upset by series of events and leave Earth FOREVER because the test of their evil plan failed. But why? 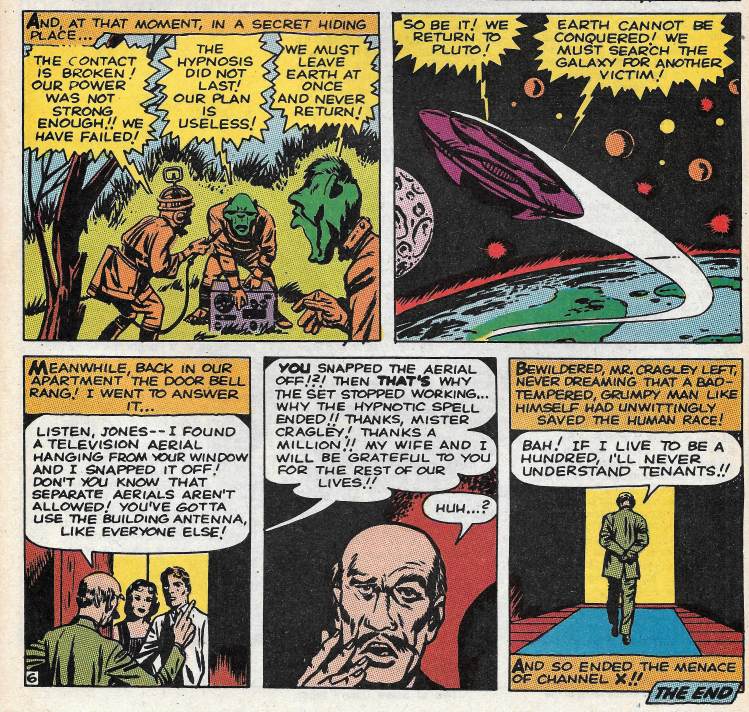 Wow, that is actually a pretty great ending. Not sure the moral lesson it imparts, but I admit to being entertained by the final twist. So this is vast improvement from the first story.

Prepare yourselves though, because up next is the BEST story in the four-issue run, a true classic tale and one of my all-time favorite Marvel monster stories. 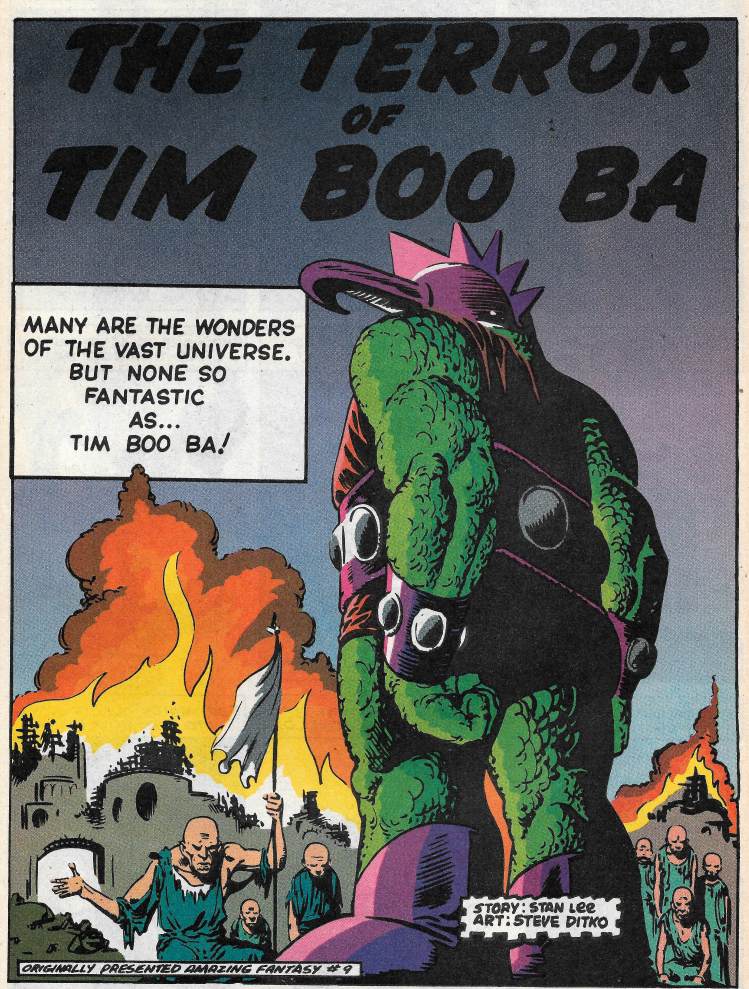 I’m not going to spoil this one with my yammering, just flip through these next few pages and we will meet up after. 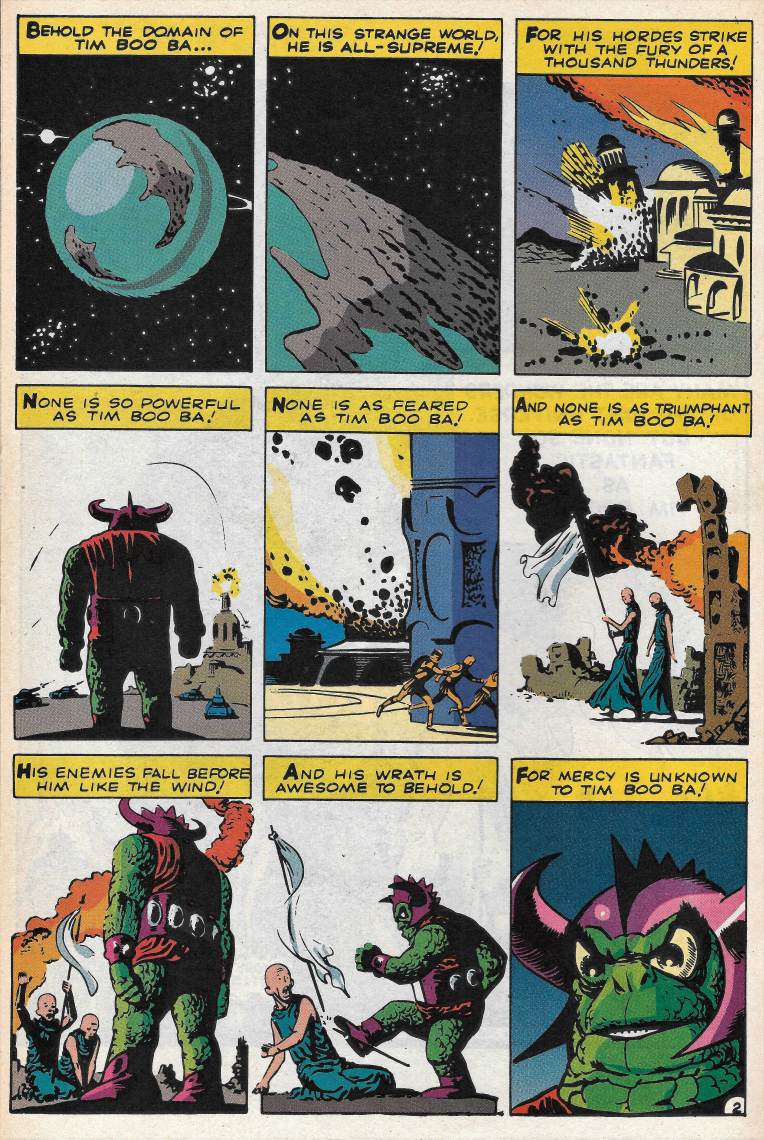 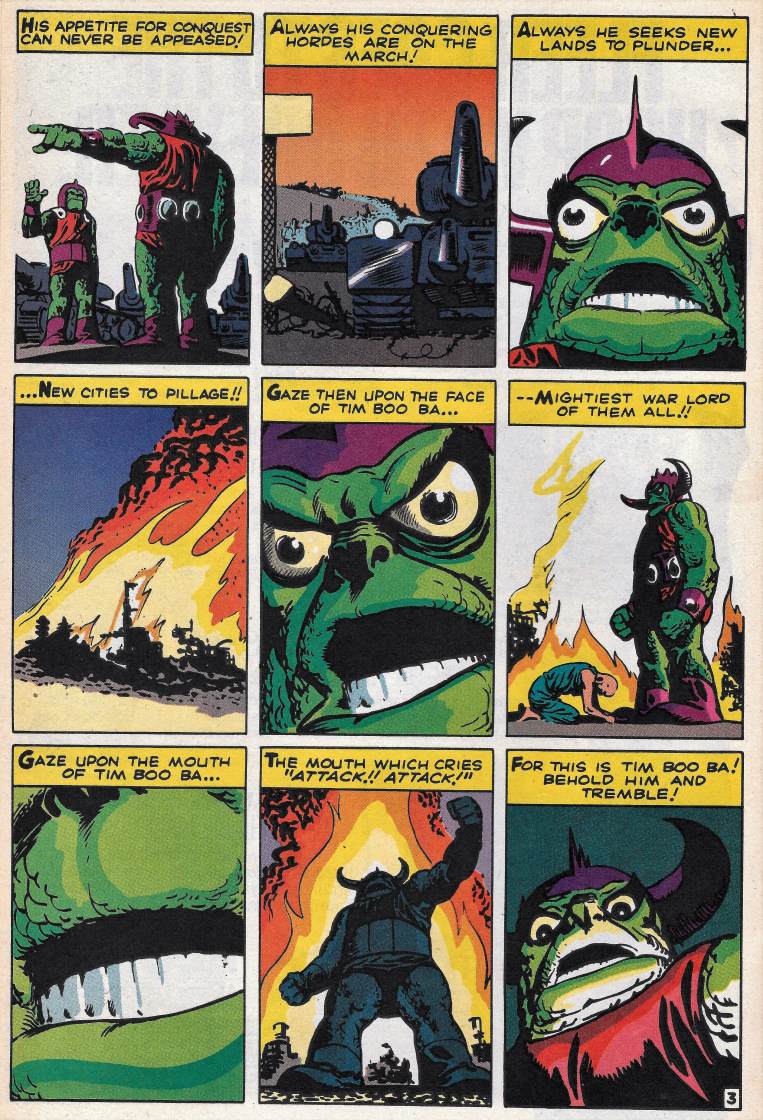 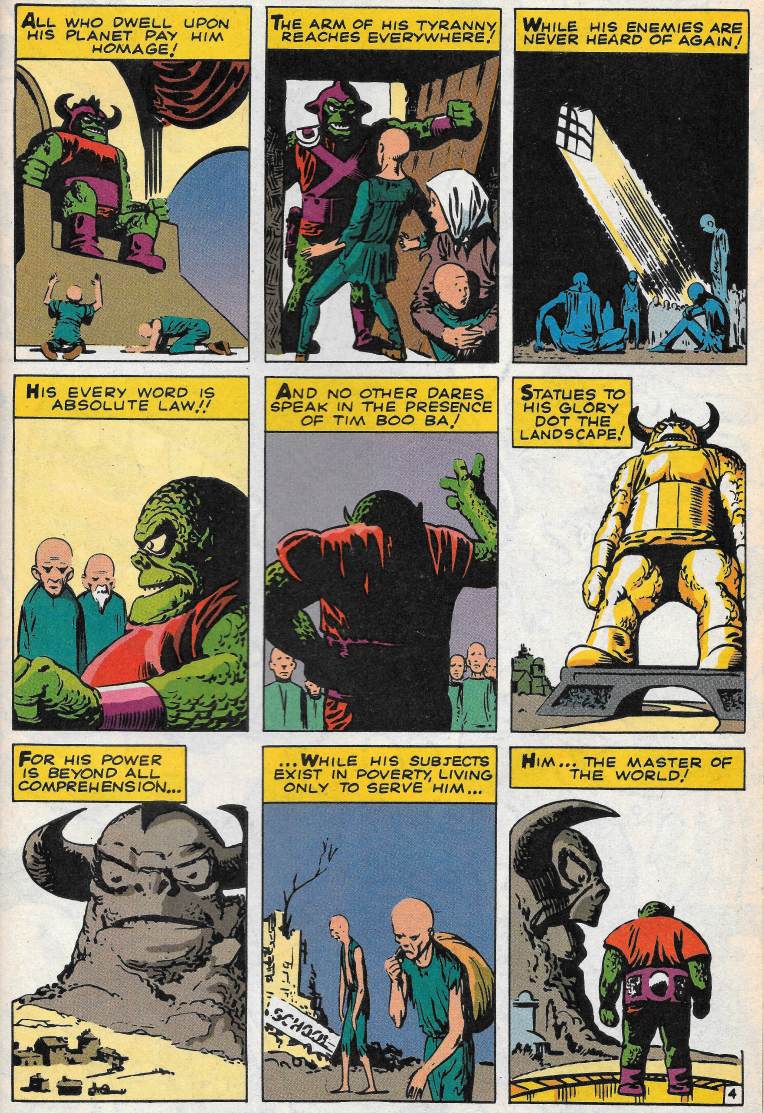 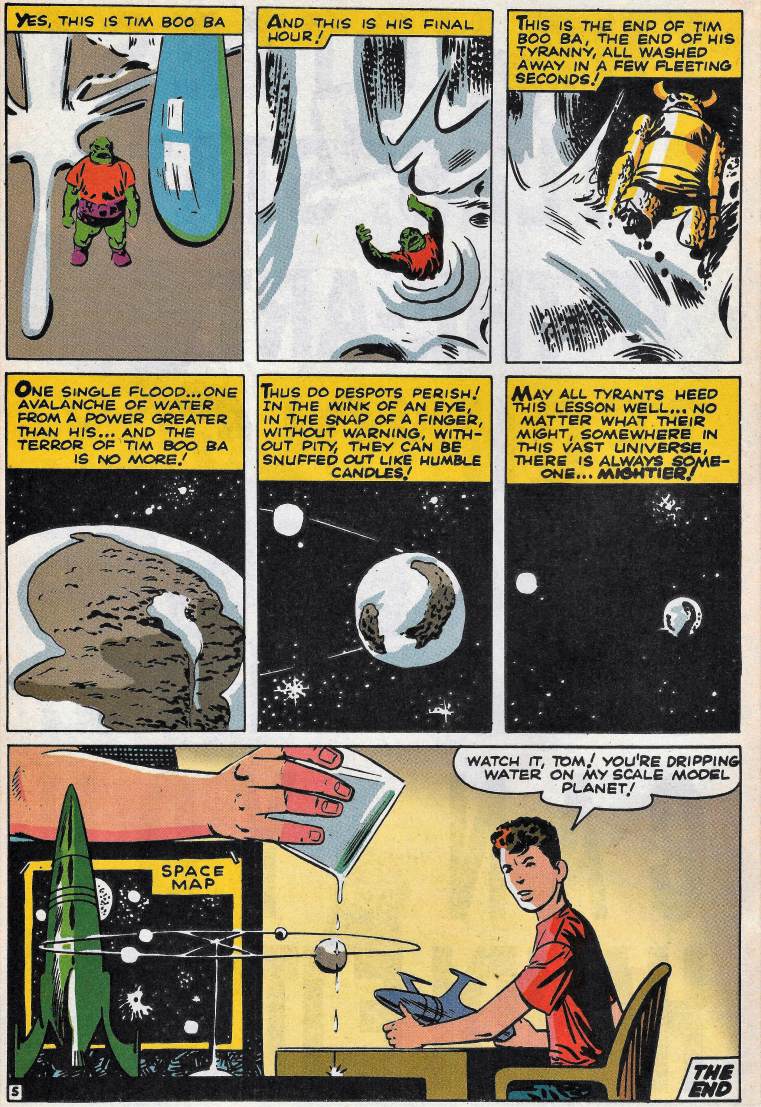 The setup. The villainy. The creation of sympathy. The distance we are from the actual struggles mirroring the reveal in those final panels. And that ultimate, Twilight Zone-worthy ironic twist.

This is one of those perfect Marvel stories that should be reprinted for every generation. One of the great things is that we build up a dislike for Tim Boo Ba from this huge distance of an omnipresent narrator. Lee’s words conjure up the worst sort of despot while Ditko’s pictures show the daily cruelty those under his heel must bear. It is effective even as we are giving the emotional distance from individual struggles. And then the ending makes all of that understandable because our world is as far from Tim Boo Ba's world as the child's model is from boy.

It could even fit as a metaphor for a political climate where we care very little for the strife in war-torn third world countries, even as we are the cause of decimation on a massive scale there. The story has so much going on in it that I feel everyone should love it. Perfect in execution, art, and plotting!

Now on to our last treat! 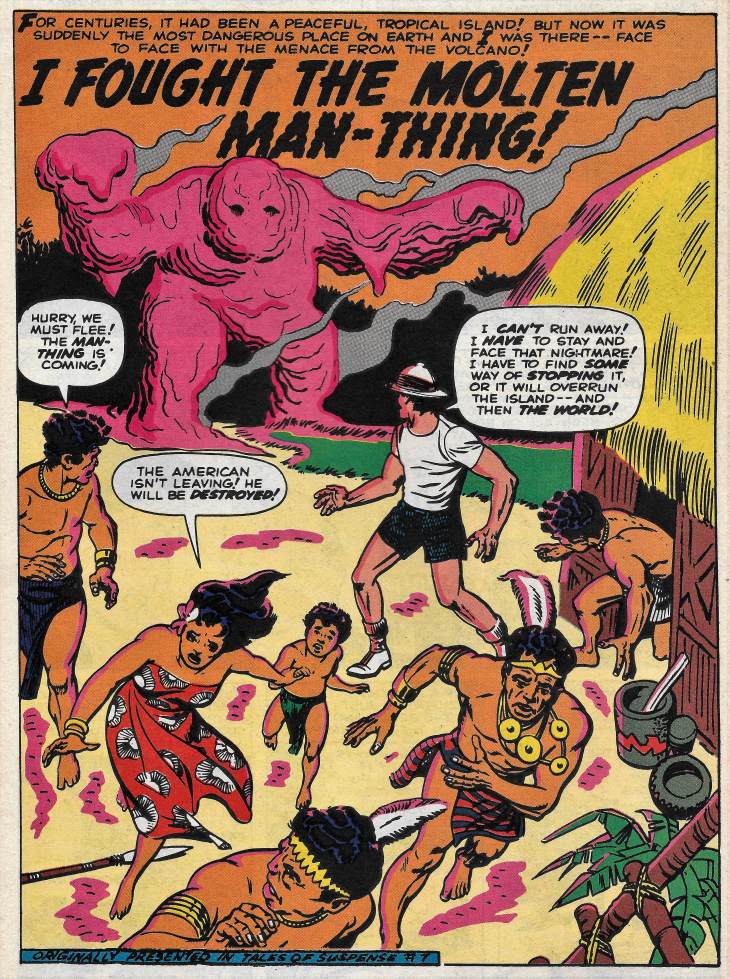 I won’t lie to you and state the story here meets or exceeds the last one. It is pretty standard stuff. What isn’t standard is the we have Jack Kirby pencils embellished by Steve Ditko’s pen skills, and that is a true treat. 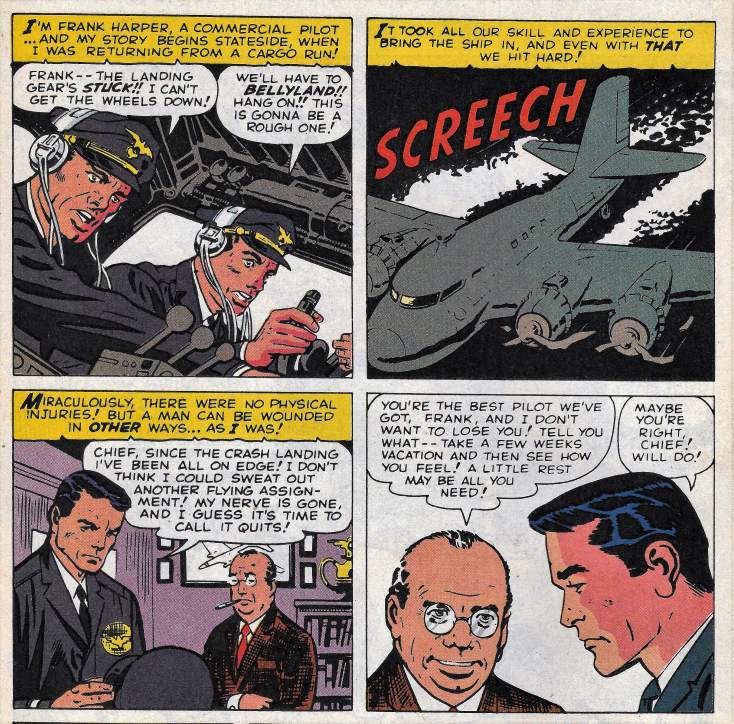 We begin by establishing that our hero, Frank, has been through a traumatic experience by showing him surviving a crash landing. He’s given a few weeks off to “get his head together” in the island paradise of Napuka. 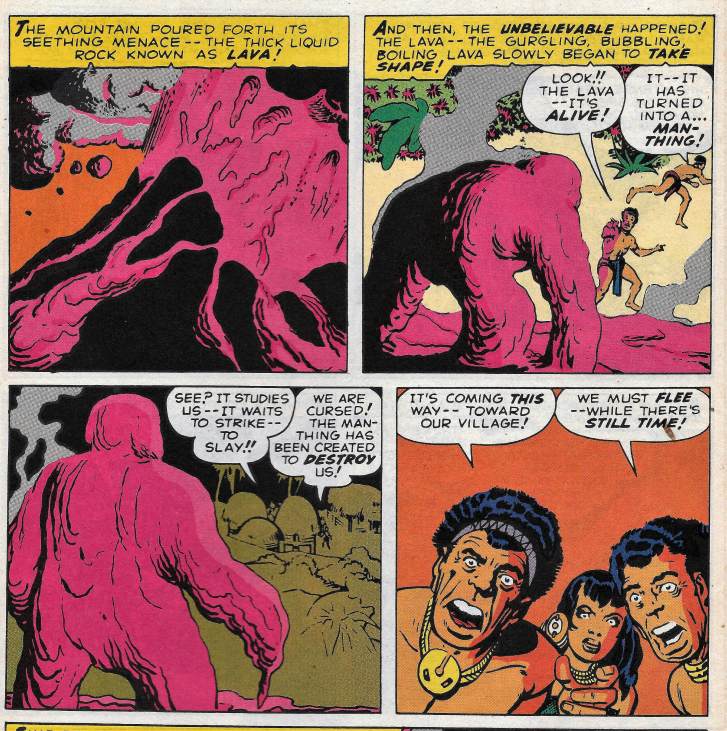 But not everything is good under Napuka’s warm tropical sun. Namely a volcanic eruption has released a giant man-shaped mass of living lava that is making for the town.

Frank knows it must be stopped! Using his wits he… 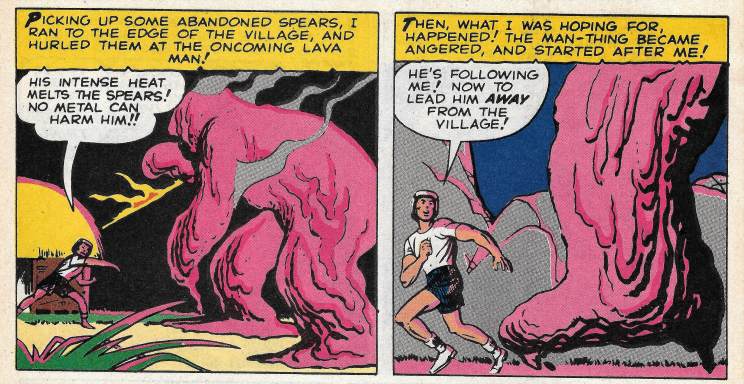 …uselessly hurls flammable objects at it to no effect. Oh. That wasn’t the whole plan. No, now that he’s got its attention… 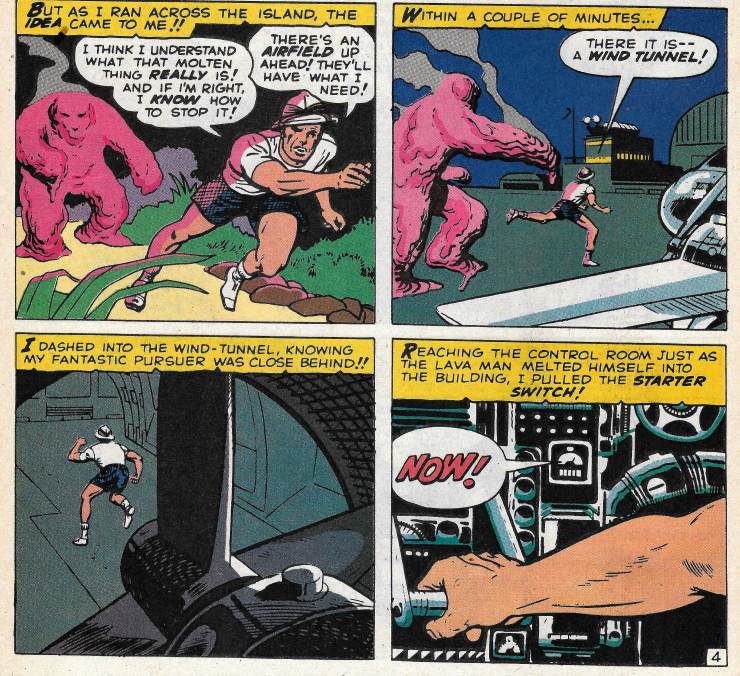 …he leads it on a merry chase into a jet engine wind tunnel.

Prepare yourself for the biggest blow job in history. 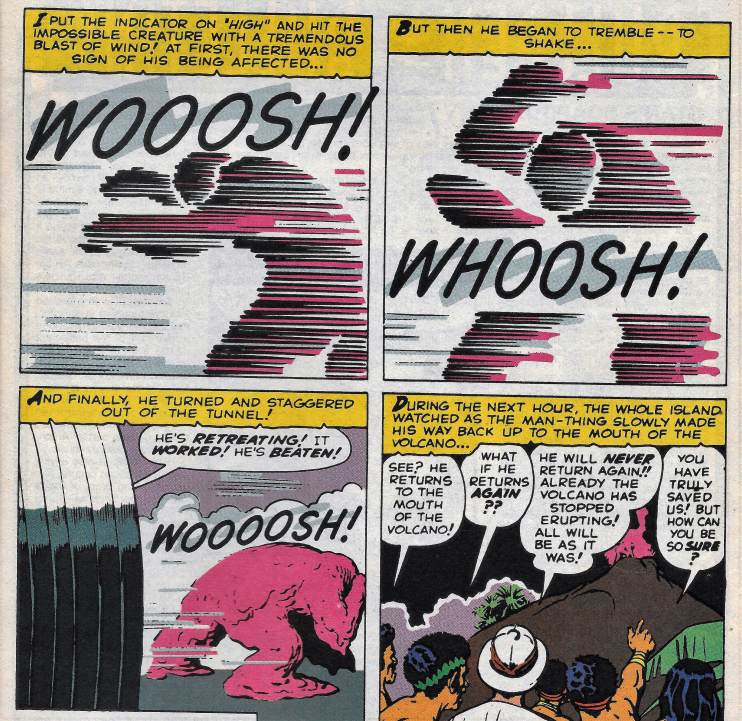 And with that, the village is saved. Frank explains that he realized there must a creature inside the molten outside that needed the warmth of the lava coating to survive. Once that was cooled, it was slowly dying. And because it learned the environment was so hostile, it was destined to never menace mankind again.

A decided step down and I wasn't blown away by it, but still kind of a fun little tale. Now to sum up the book as a whole.

Was this fun? Sure. I enjoy going on Marvel history lessons back to the Pre-silver age and the companies it grew from. It is great to see stories by the top three Marvel talents of the early years working together to create fun and entertaining stories.

If I had one issue with the series it was that it excluded so many other classic Monster Tales. Noticeably absent during it's four issue run are  the original stories featuring Groot, Fin Fang Foom, and Gargantus. We do get the Living Totem, but it feels odd to exclude other, more popular monsters for the “also rans.”

If you like old school, Pre-code Marvel monster stories however, this pulls out some rare stories, but it is far from a complete journal of the best that era had to offer.
Posted by SonOfCthulhu at 2:50 AM