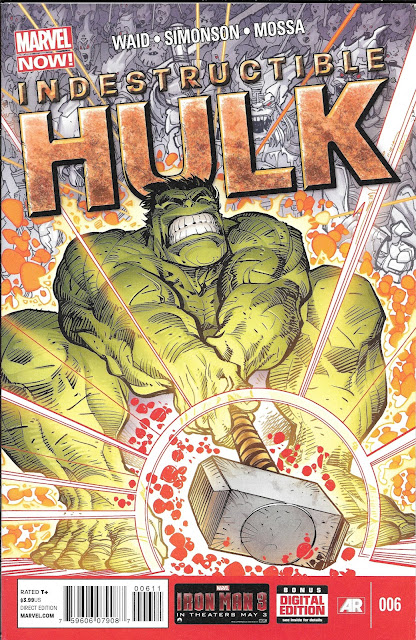 You’ve got Hulk all in my Thor movie…
Naw, you’ve got Thor all in my Hulk comic book

I’m not going to wax nostalgic for the days of Bruce Banner as the Hulk. Some might, but not me. I don’t have a feeling one way or another for the Amadeus Cho Hulk other than to note that giving him the power without taking away his intellect and not having to carry the burden of a raging monster inside himself really diminishes what makes the Hulk different from other heroes.

And not to sound like one of those who rage against cultural change, but I do miss a good Banner Hulk story.

Which is why finding these three Indestructible Hulk books such a treat. We have Waid on writing, and he’s always a treat. Simonson is doing pencil and ink, so you know those are going to be astounding. And best of all, we have Hulk teaming up with Thor, JUST LIKE IN THE NEW MOVIE Thor: Ragnarok!

What a coincidence that the Crapbox would throw these out right now?

Okay…I kid! I kid! This was all a carefully orchestrated plan to showcase books that feature characters from the new movie and hopefully garner a couple more accidental views from people trying to find a movie showtime.

Does it bother me that I’m essentially using the same marketing technique as the people from Asylum Pictures? Makers of fine direct-to-video also-rans such as Sinister Squad, Transmorphers, Atlantic Rim, The Da Vinci Treasure, Age of the Hobbits (really!?!), Snakes on a Train and Sunday School Musical.

So to deflect, I’m just going to start talking about the issue and hope you fail to notice that I didn’t really answer the question.

We begin with the Hulk working for SHIELD, of all things, taking out terrorists. He is done up in Simonson’s unduplicatable style and man, isn’t that bombastic. 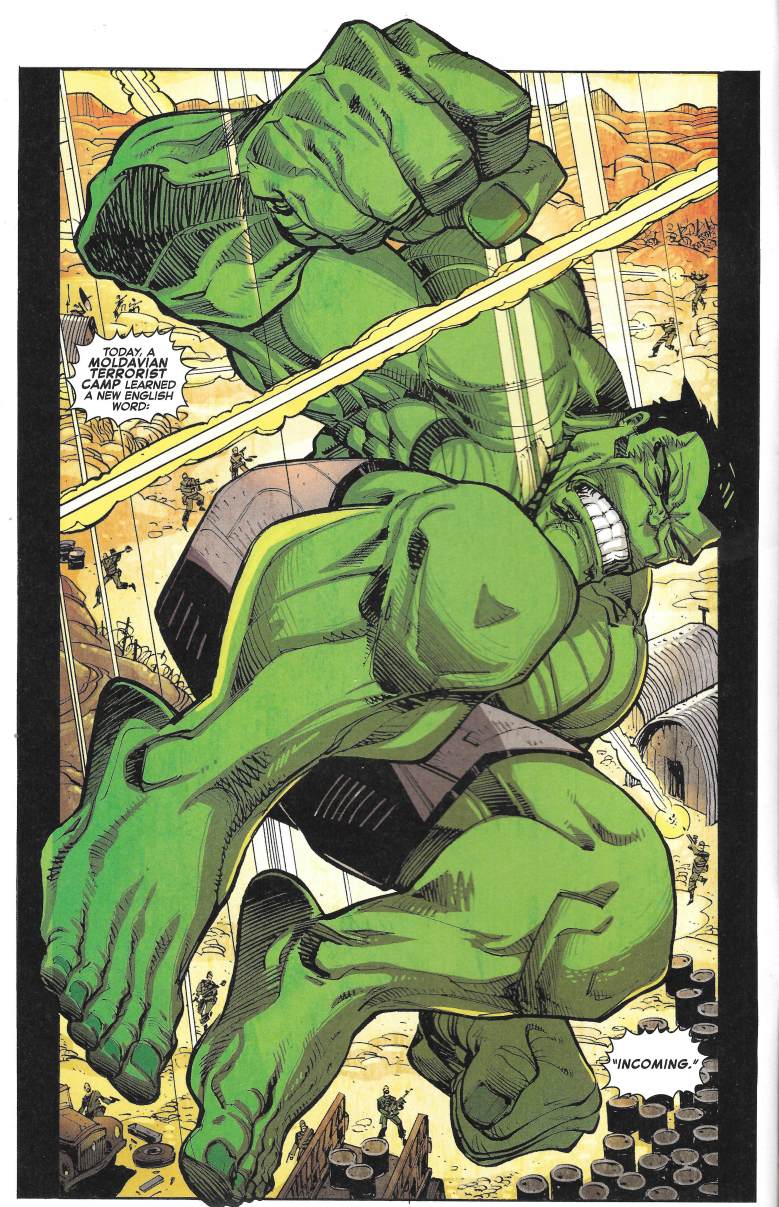 In a series of pages we watch Bruce’s new SHIELD liaison, who appears to have a drug addiction get an email directive and then we meet the folks on Bruce’s team, who each are hiding a “secret” self. But we aren’t about to learn that today. 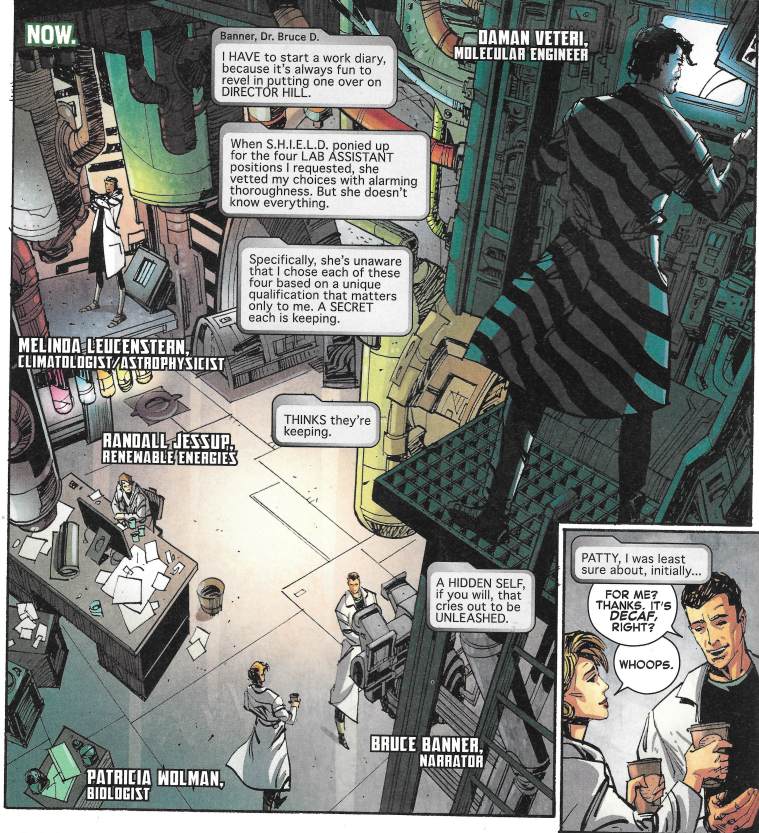 Nope! Today we are going to be playing with Uru metal. Uru, for those of you unfamiliar with the substance, is a magical substance that comes from one of the other Nine Realms. 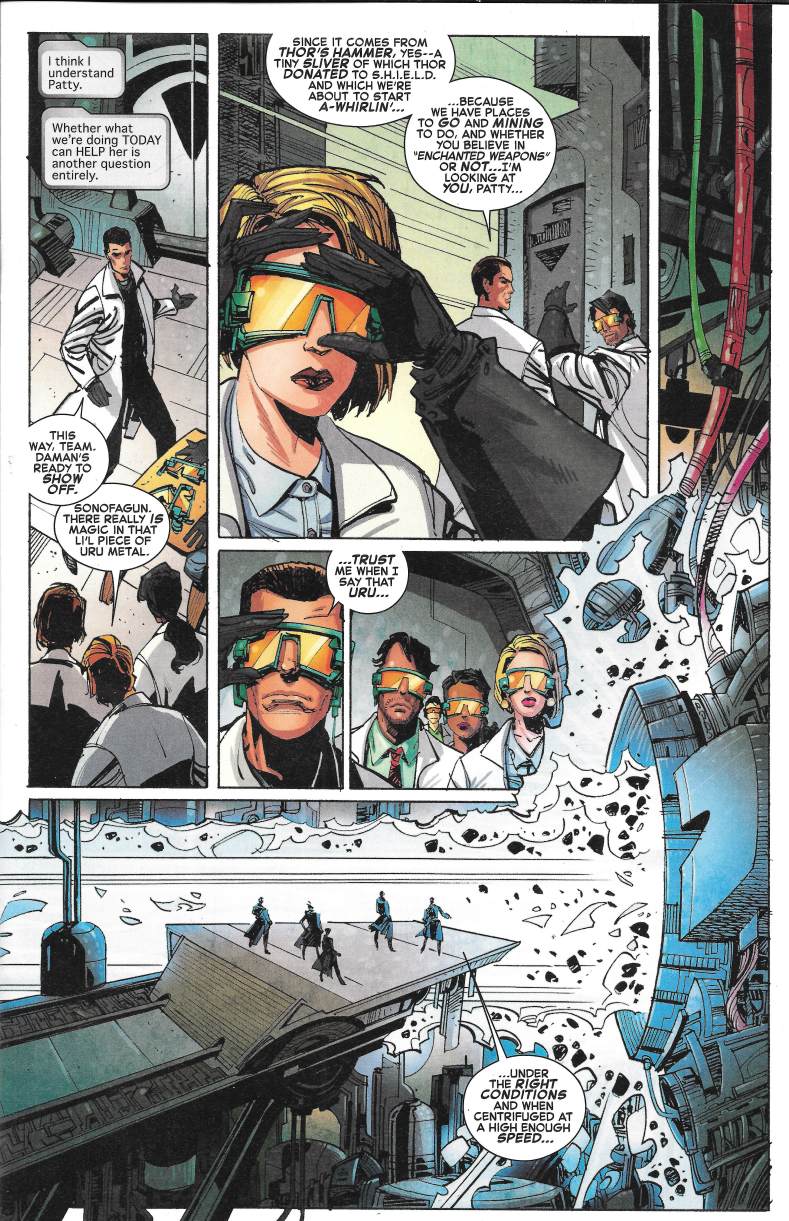 Asgard, to be exact, and it can be used to open magical portals to that dimension. 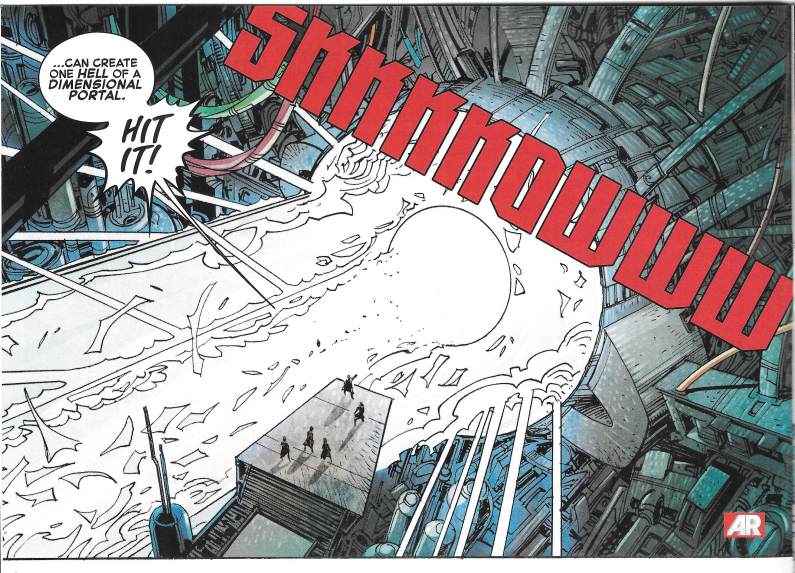 Not only that, but Uru is the metal that was used to make a very special weapon. A hammer, to be exact, that through treachery of Loki, was made with a handle two small to be wielded two-handed, as is proper.

It is called Mjolnir, which in Asgardian means “Grinder”, and is possibly one of the coolest weapons in the entire Marvel universe. Odin imbued it with magical properties and inscribed on its side the verse: “Whosoever holds this hammer, if he be worthy, shall possess the power of Thor.”

This is Thor. And he knows someone is coming to visit. 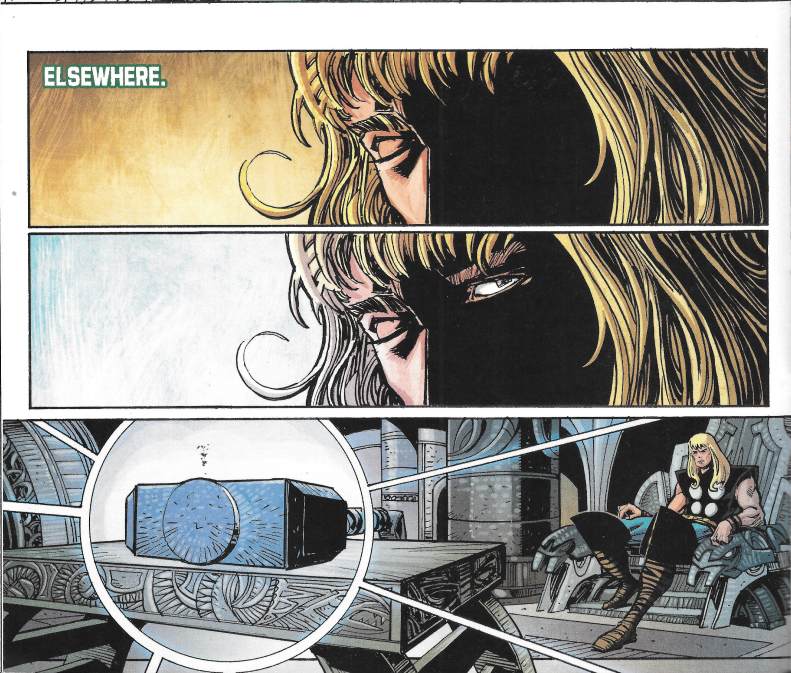 That someone being Bruce and his team, who are seeking…well, I’ll let him tell you before they all suit up like 80’s action figures. 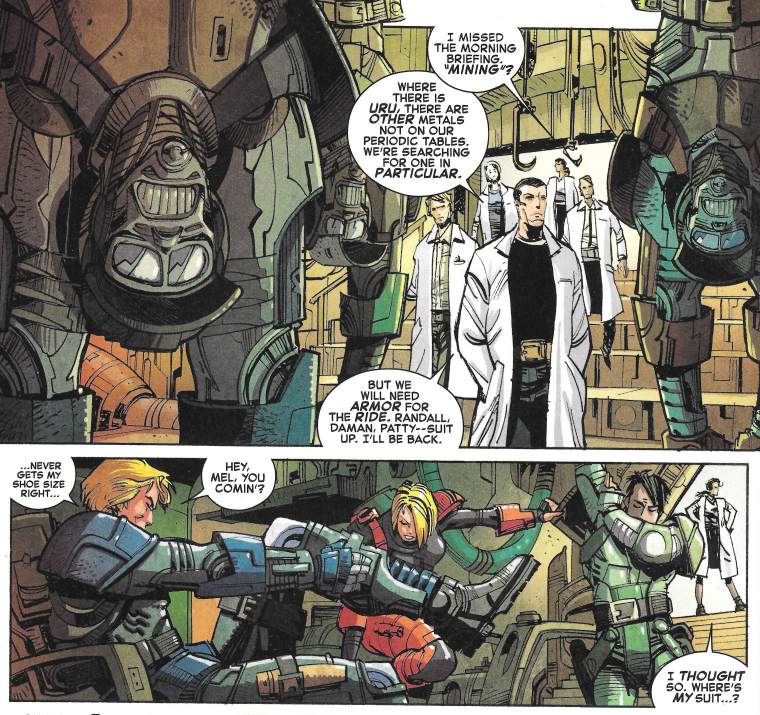 Now we are talking! The team heads into the portal where action is definitely to be found. 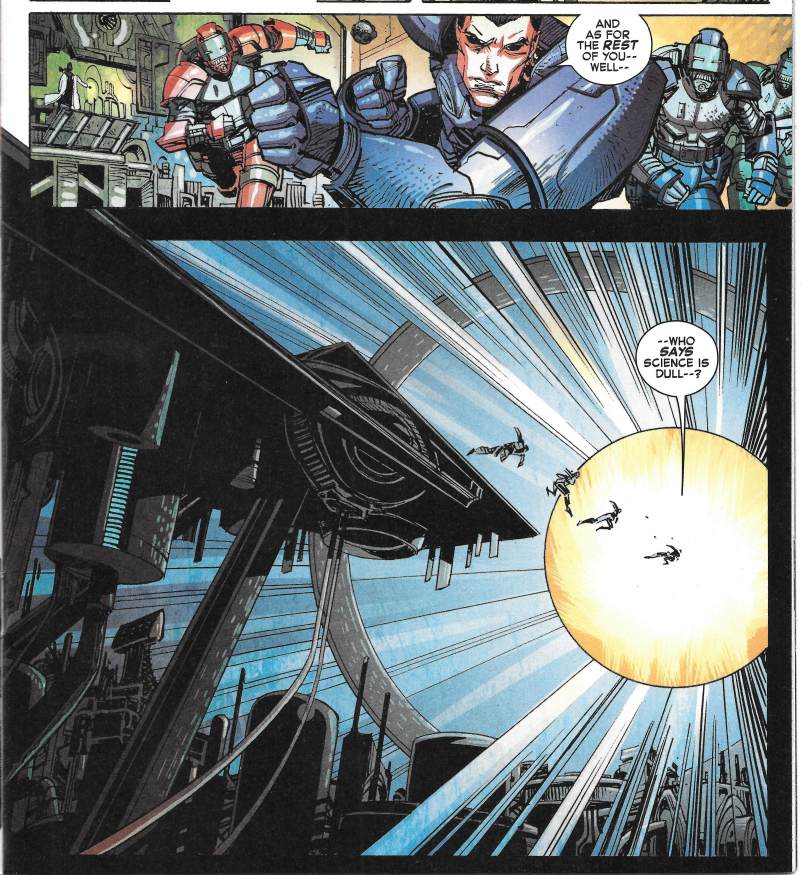 They land with a splash of flare and I just have to say it is so good to read a Simonson comic again. 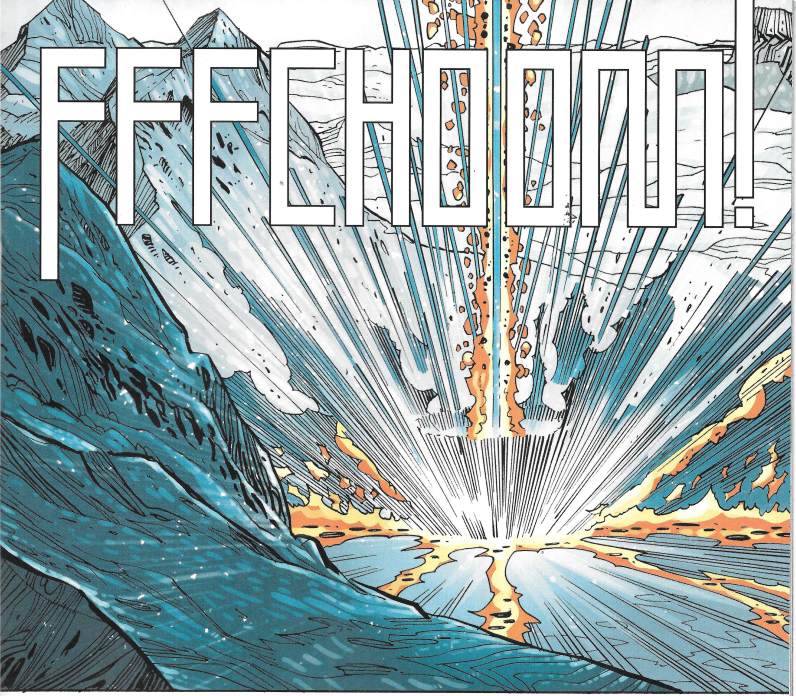 While Bruce tells his team to be on high alert for any danger, from outside or from him turning into his jade-colored alterego, two pairs of cold eyes spy upon the group. 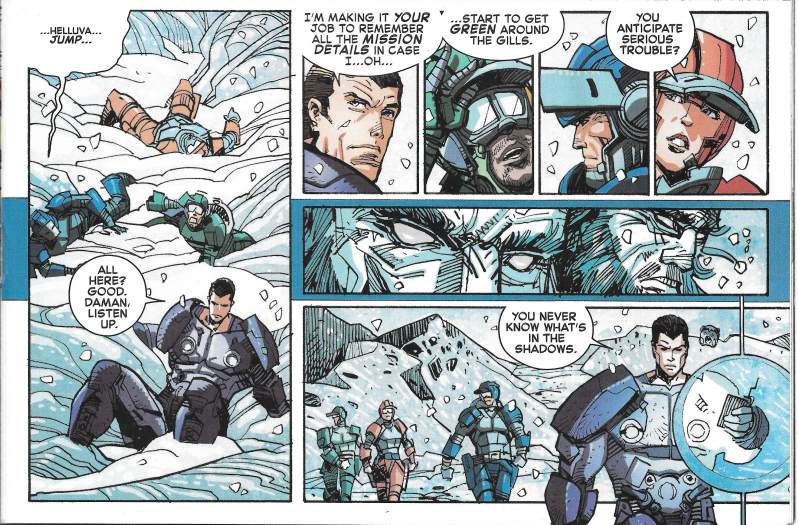 It’s then we find that Bruce didn’t aim the Uru at Asgard, but instead tweeked it so they would wind up in Jotunheim, the realm of the frost giants. Seems that’s where the mystery metal he is seeking can be found. Not only that, but also this old friend. 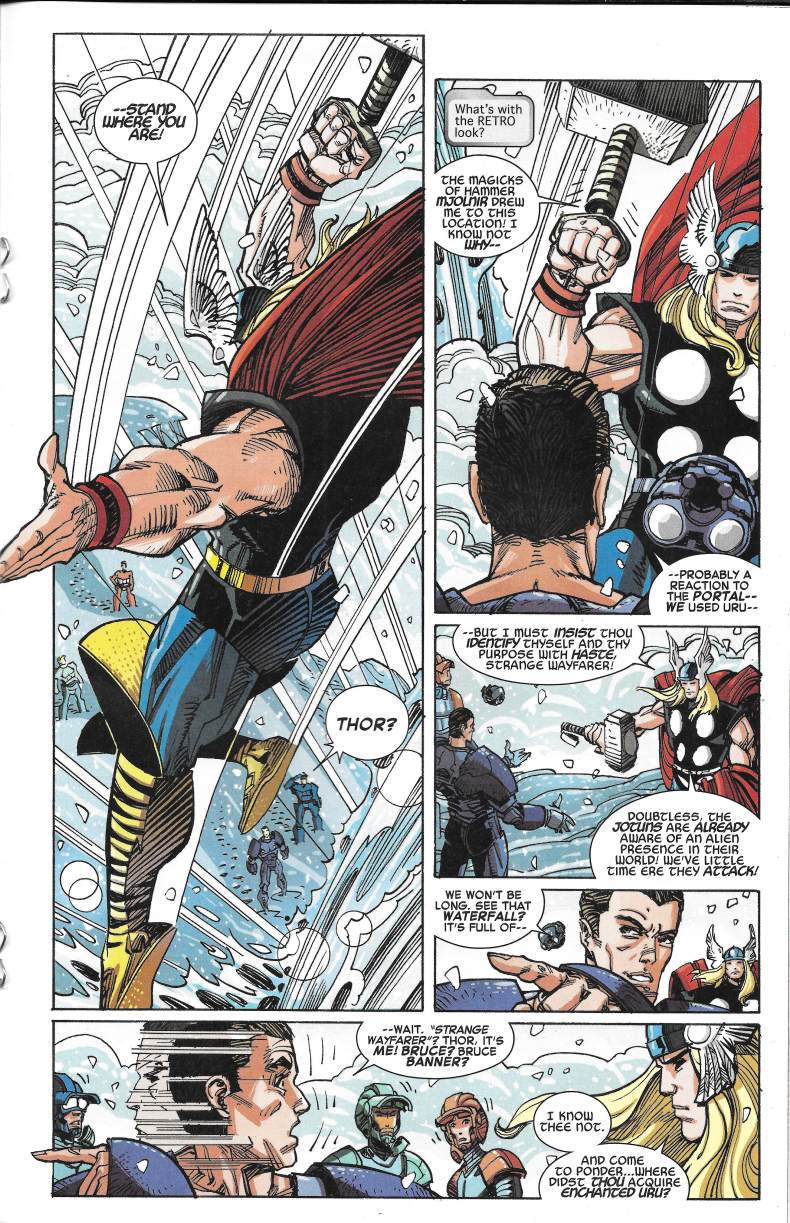 Except Thor doesn’t recall Bruce. Like at all. Which is STRANGE given how long they’ve known each other. 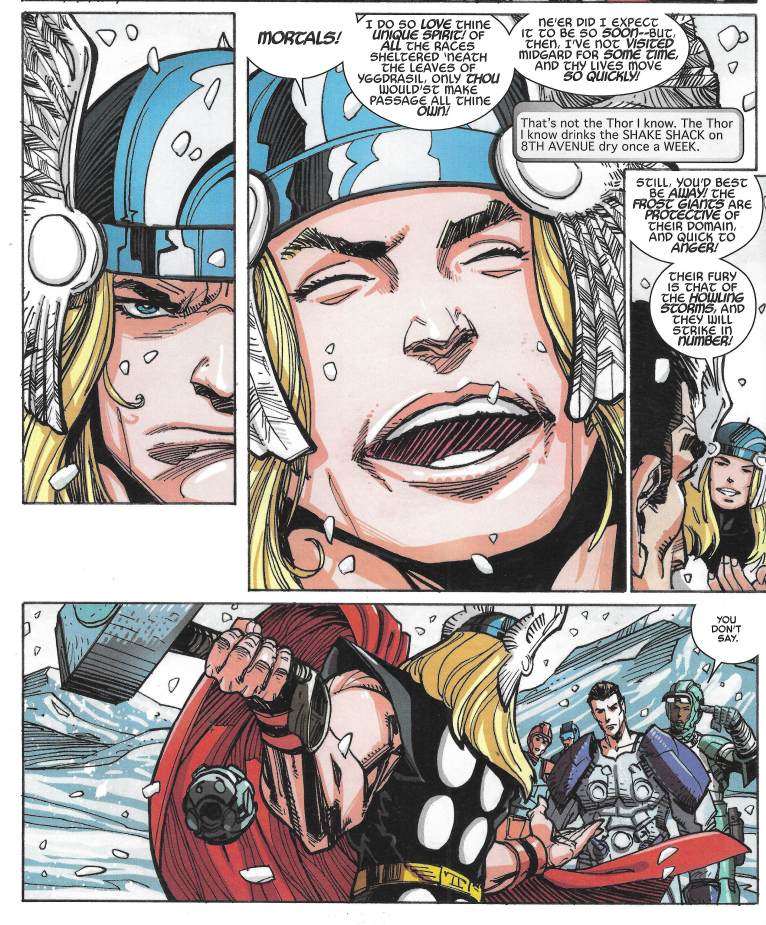 In fact this appears to be Thor from the past somehow. He claims not to have been on Earth (Midgard) for some time and Bruce knows that isn’t true…but right then we get a respite from the mystery because… 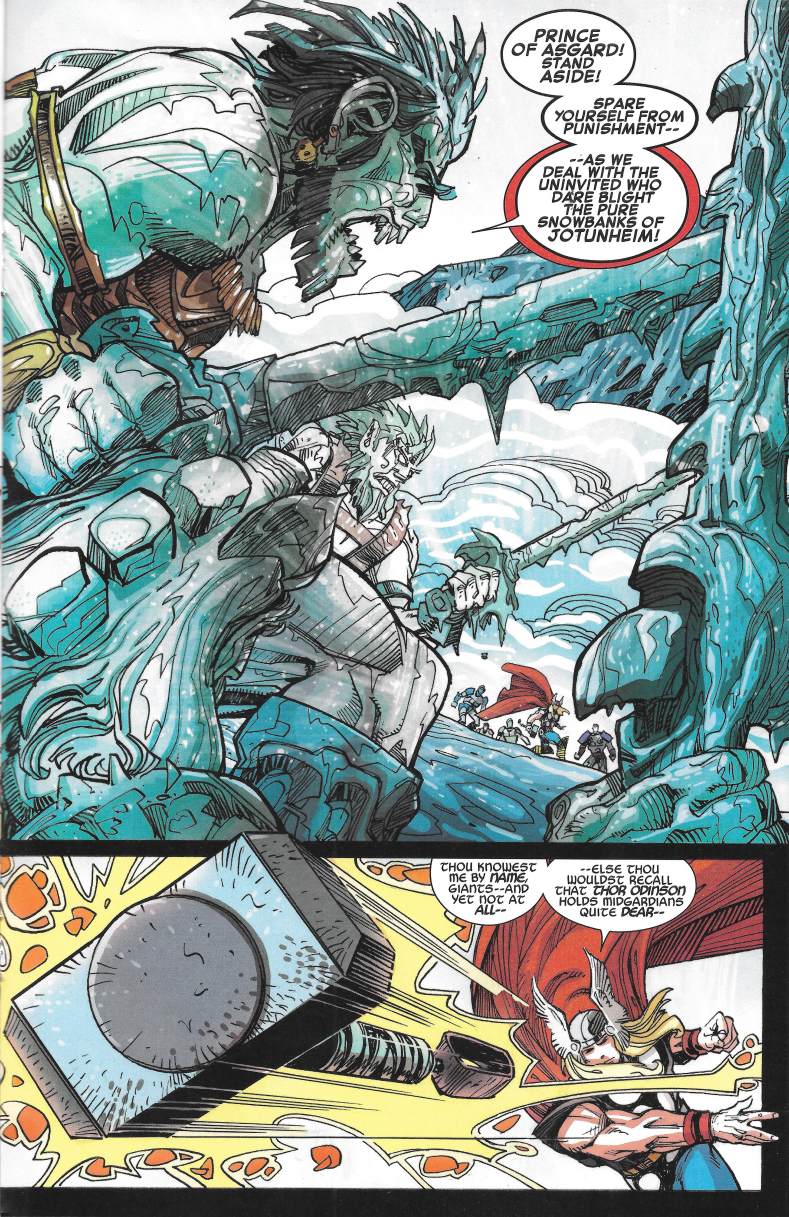 As Thor goes to motherfrick’n town on these snowmen, Bruce gets grabbed… 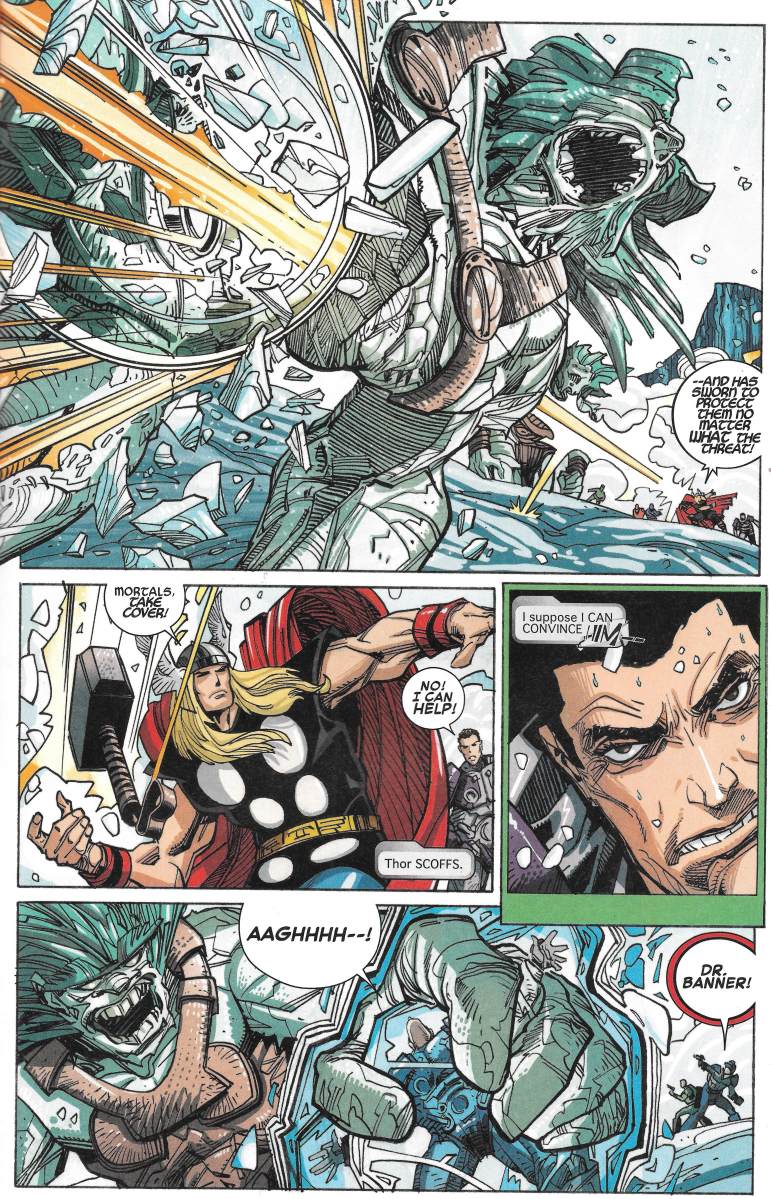 …and frozen, forcing his lab partners to jump in and save his skin…with a little help from Thor. 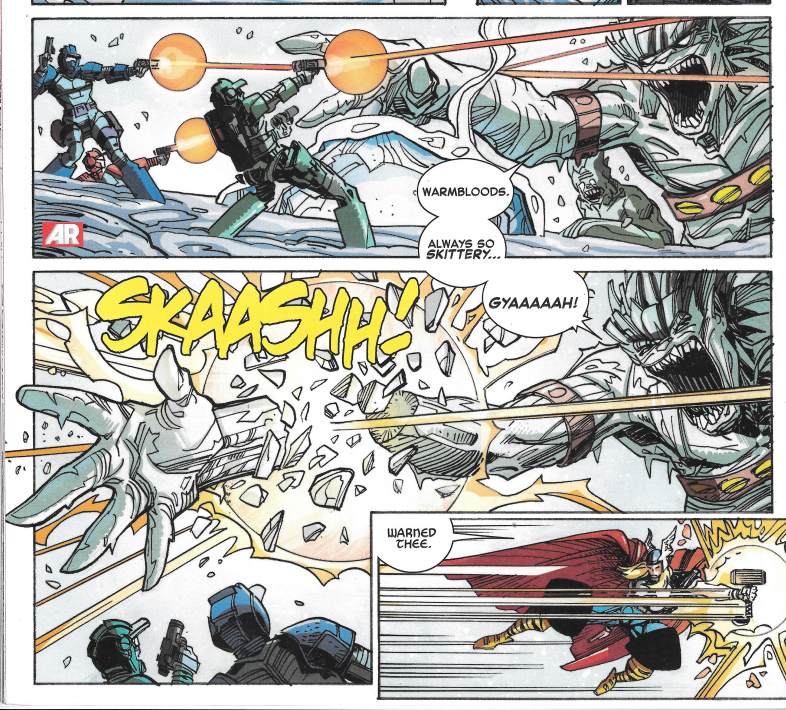 …who warns everyone to get away moments before being backhanded by a frost giant. 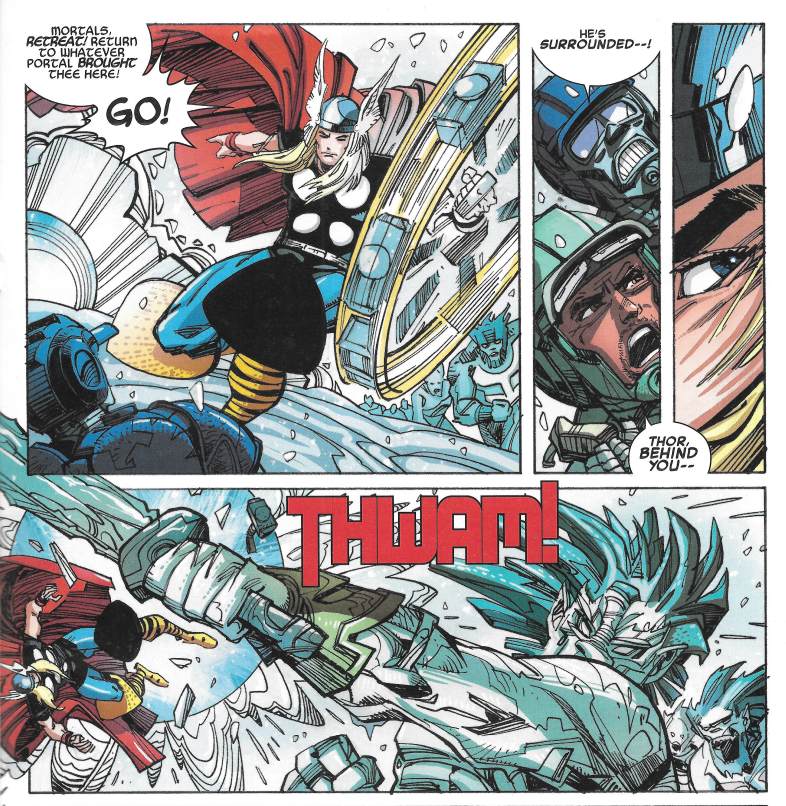 …and in taking that hit, Mjolnir goes flying… 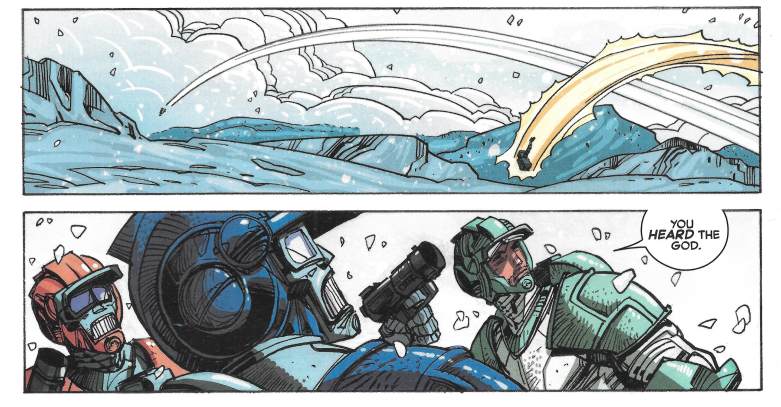 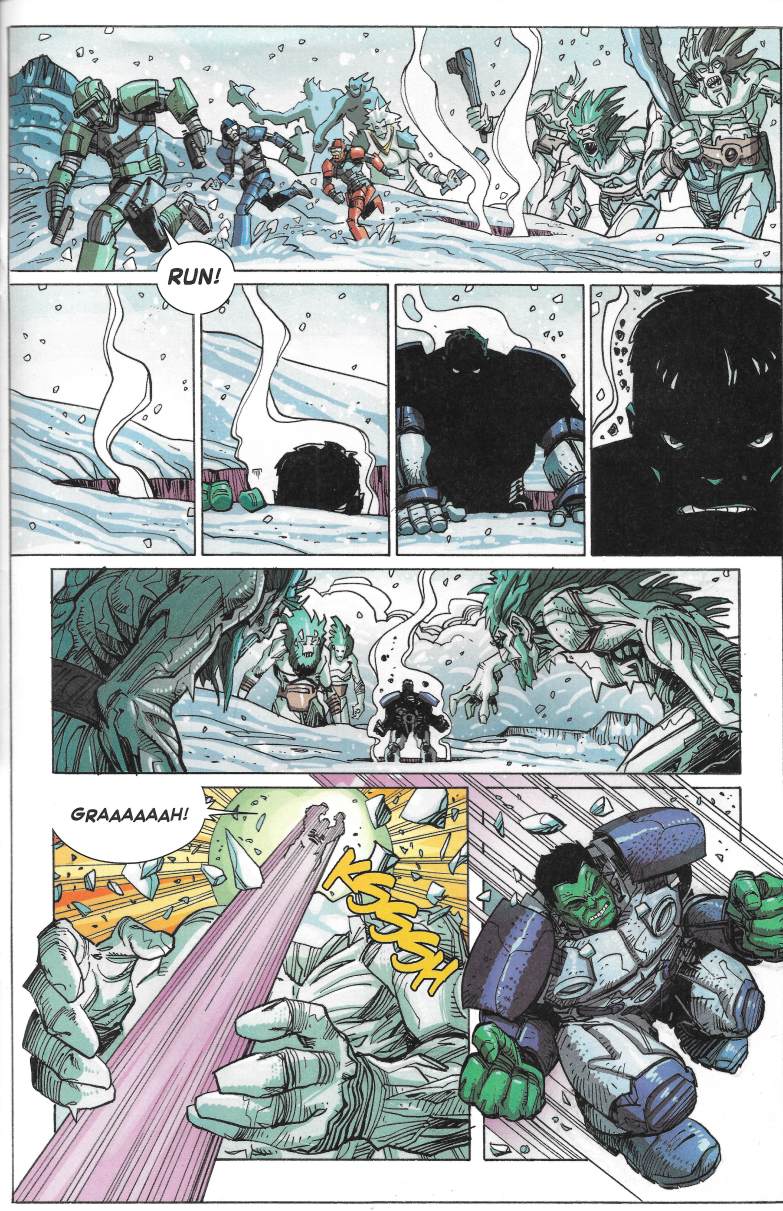 And NOW we have a battle.

The giants overlook the Hulk as “barely worth their effort.” 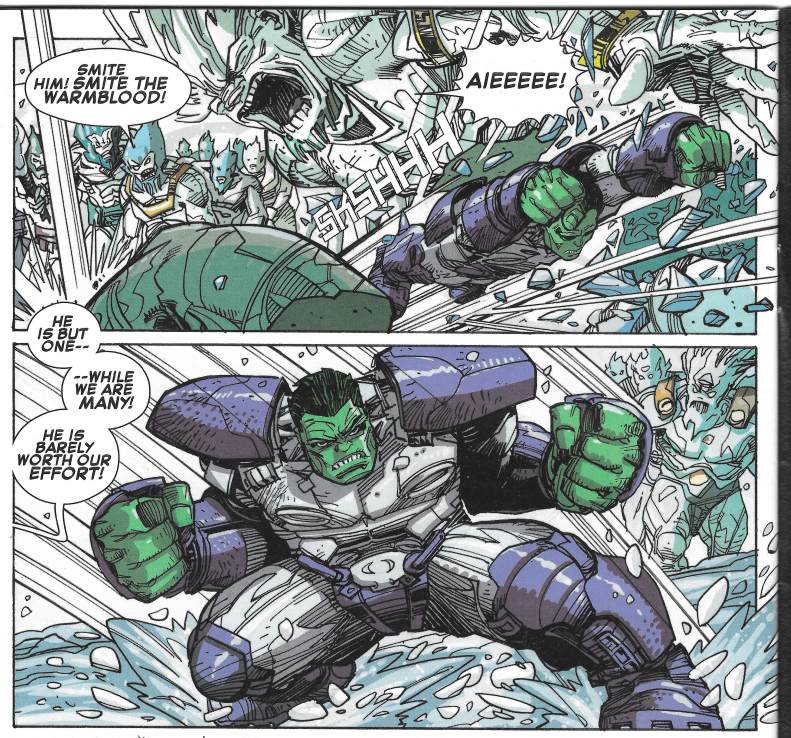 He decides to risk something and show them how wrong they are to underestimate him. 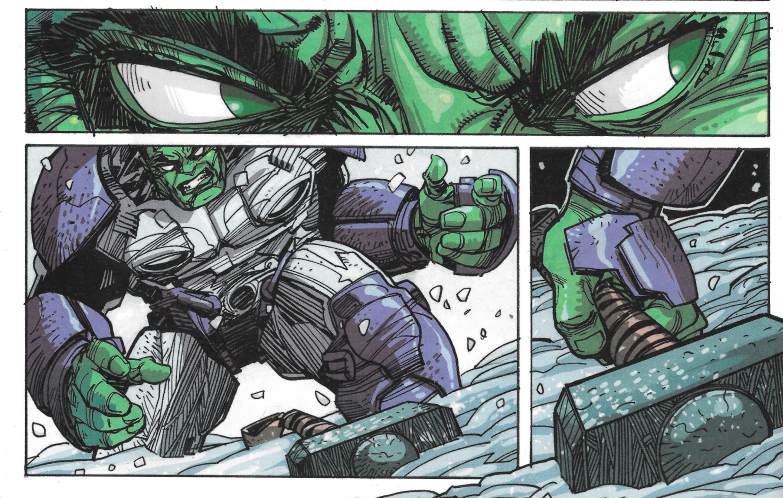 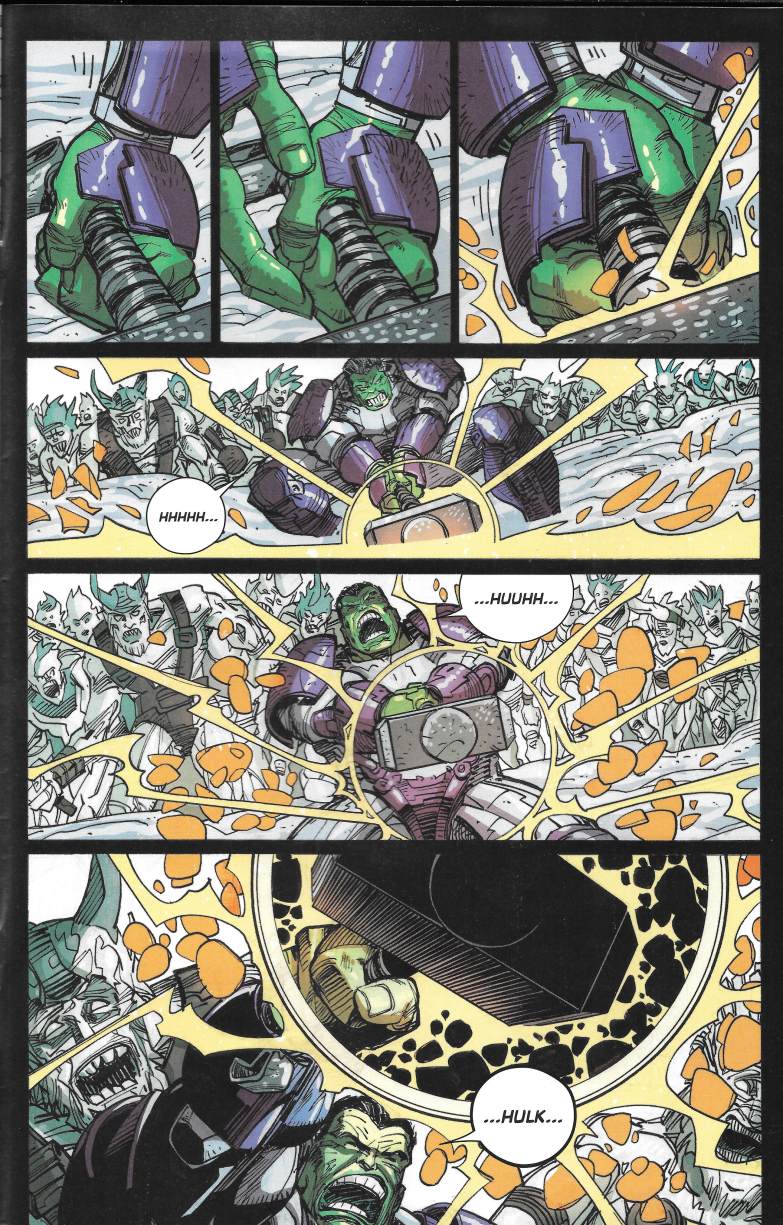 …it WORKS! Hulk picks up THOR’S HAMMER! And whomever does that, gains the power of… 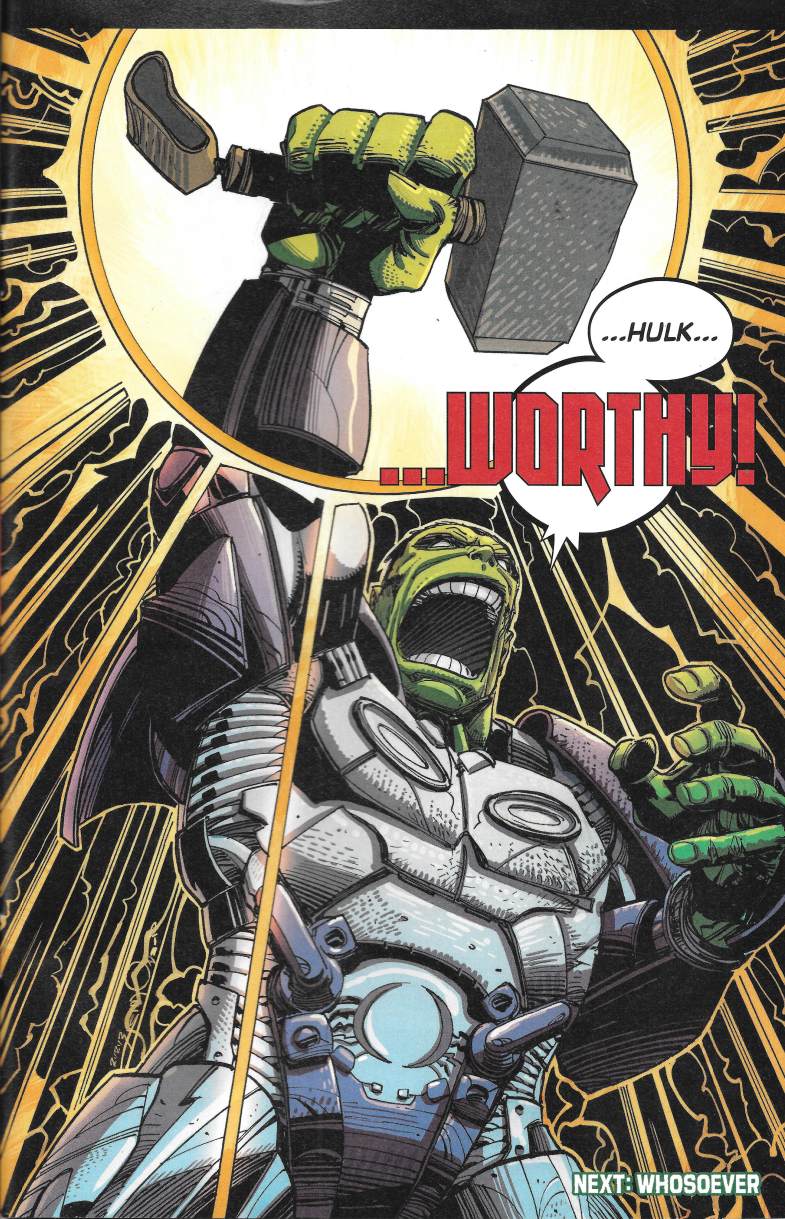 That is the cliffhanger that Waid and Simonson left us with and man, is it a good one.

As for tomorrow night? I don’t think we will see Hulk lifting Thor’s hammer. That's because of the actions of someone I will be covering in tomorrow Crapbox. Those who have read this arc know that even in the comics it isn’t something that has ever really happened. Not outside of some very special circumstances that I won’t go into here. Spoilers and all that.

This was only a three issue run by Simonson and it is a shame because we just don't get enough Hulk and Thor vs frost giants EVER! They were a marvelous three issues to read, but sadly Simonson was out after them and a new art team came on. Hulk and Thor together for a long 12 issue Simonson run? I can't think of much that would top that.

Except for maybe a Mjolnir-wielding Thor-Hulk. That might be pretty durn cool!

Posted by SonOfCthulhu at 3:51 AM