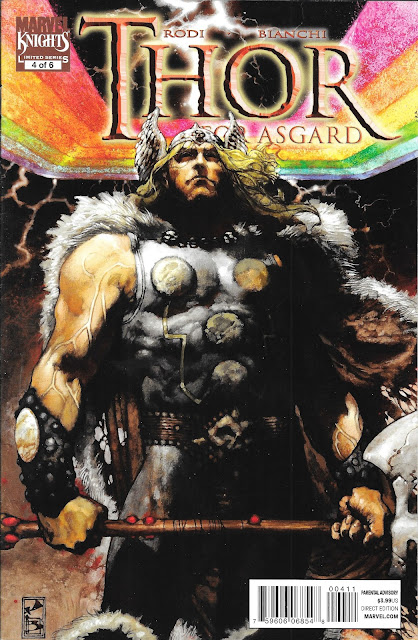 Today we are going to concern ourselves with one of the antagonists of Thor: Ragnarok by delving into part of a limited series that isn’t in continuity to my knowledge.

Thor For Asgard was a six issue tale of a future Asgard where Thor has been ruling in his father’s absence. Odin appears to have taken a powered at some point many months or years before.

And sadly, Thor just isn’t up to the job of ruling. Asgard is assailed by an unending winter freeze that has killed the Golden Apple tree that provides the gods with youth and eternal life. The kingdoms and realms that owe allegiance to Asgard are all in open rebellion, meaning that Thor spends most of his time running from battle to battle trying to quell all the uprisings. A few Asgardians have even turned terrorists, using some kind of super-science weapon to blow up the Bifrost and fatally wound Heimdall. To make matters worse, Thor obviously isn’t himself – he’s so unworthy that he can no longer wield Mjolnir.

As for the book, I have five of the six and I do NOT recommend it. In fact I am going to skip over this review of all the plotlines which writer Rodi leaves mostly unresolved after farting around with these characters for six issues and I’m going to skip to covering the ONE great scene in all of this mess.

You see, it involves Hela.

That’s right, Hela – the ruler of Hel and Niflheim which are both the Norse equivalents of the colder part of Hell and a smoky Limbo region. The fiery parts of Hell correspond to Muspelheim, which is the realm of Surtur the fire demon. Basically the Norse had all sorts of bad places for you to go when you died, but only one place that was decent.
That place was here, where Thor is going with the Valkyrie Brunnhilde. Valhalla, where only the honored dead are allowed to go. And today Thor
is delivering his friend Heimdall to this sun-dappled Heaven. 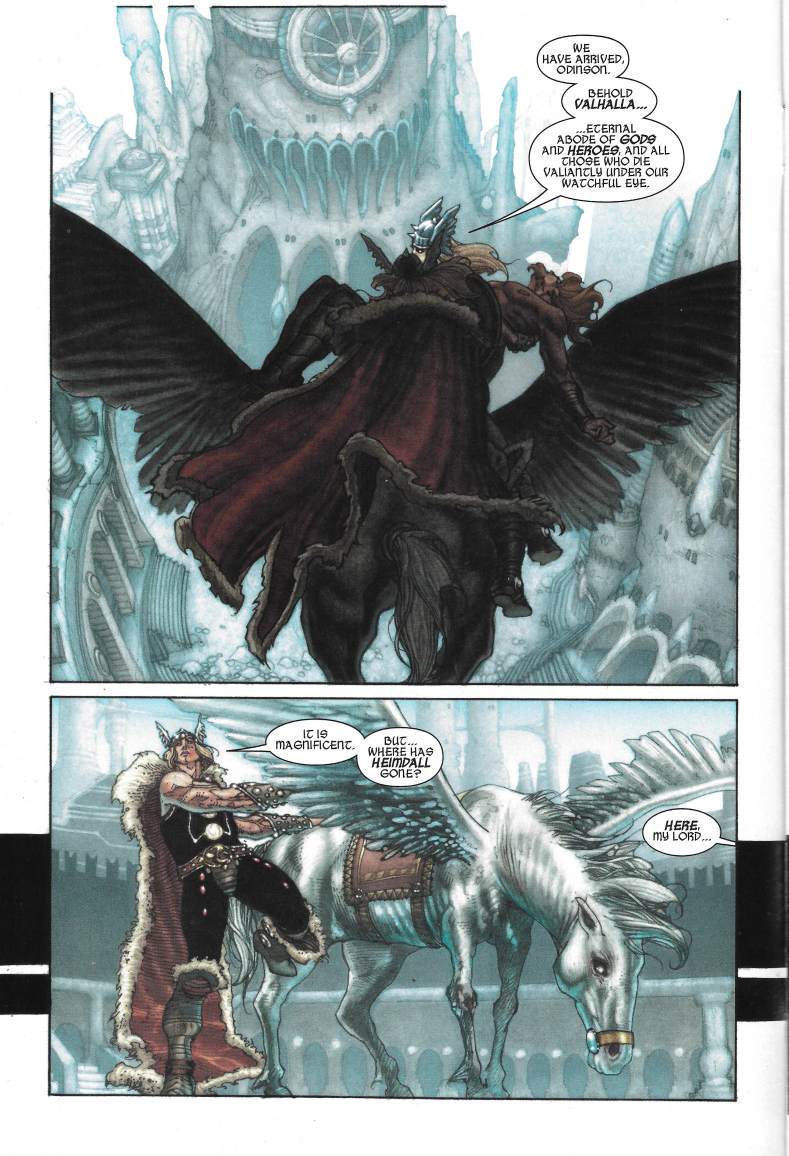 This series was a letdown for me on many levels. For one thing, it is depressing as all getout. Thor is beset by problems that have no easy solutions and he is never given a chance to best even one of them. By issue five, which is the last I have, he even appears to die himself. And it’s not a warrior’s death, but a lingering death in bed. I’ve heard tale that issue six doesn’t have a resolution for most of his woes, either. The story just … stops.

Adding to the depressing story is the fact that with the exception of the part we are about to see, the entire thing takes place in an iced over Asgard. That means the book is a awash in pale blues and whites, leading to it looking like you see here. Maybe you will dig it, but the art leaves me very cold. Especially given that this is supposed to be the Heaven Asgardians aspire to. It looks just as cold as frozen Asgard.

No matter about all that, we are here for Hela. She won’t be making an appearance right away, so let’s first learn a few things about Valhalla, which this appears to be Thor’s first visit. 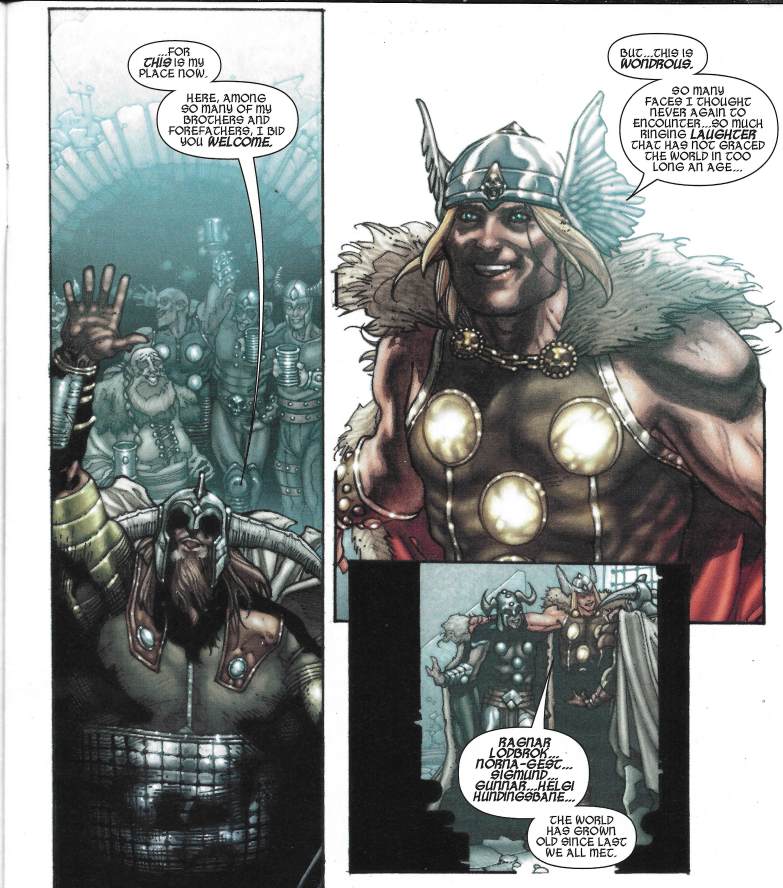 Valhalla is like the bar in Cheers, apparently. Everybody knows your name and they are always glad you to see you. Also eternal youth an vigor, which I thought the gods of Asgard had anyway, but maybe that’s only if they get their golden apple-a-day.

So what do you do all day long if this is where you find yourself? 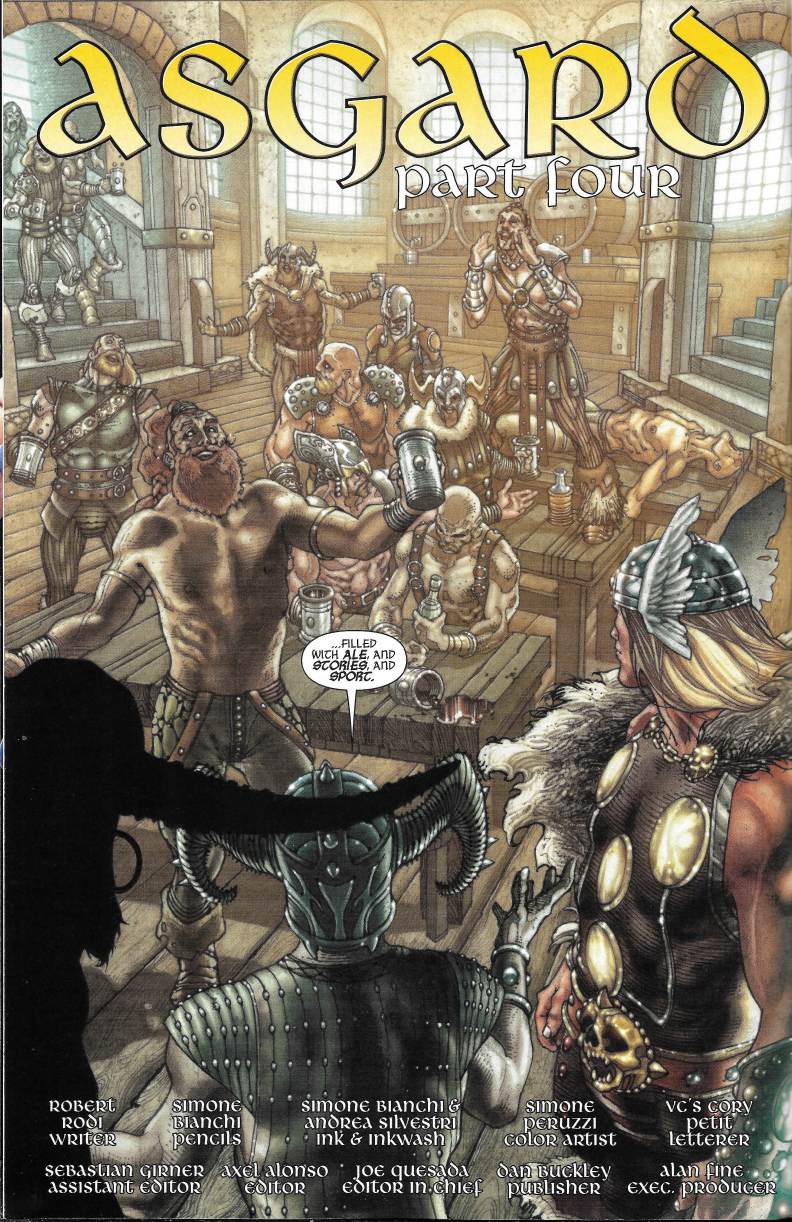 Appears that Valhalla is EXACTLY like Cheers. I think I even see the Norse versions of Norm and Cliff there in the back.

Thor mixes with the throng, but he is searching specifically for Balder. And that’s when it happens… 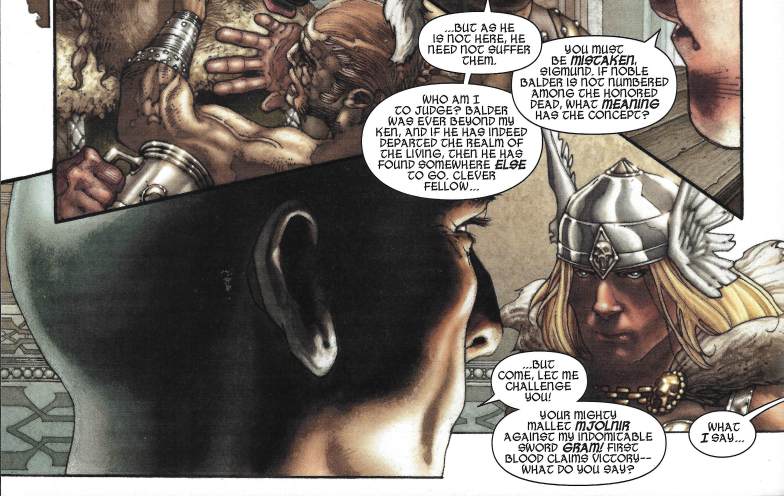 In walks a very “non-horny” Hela and this moment is the only moment of “oh, shit!” I had in the entire series. 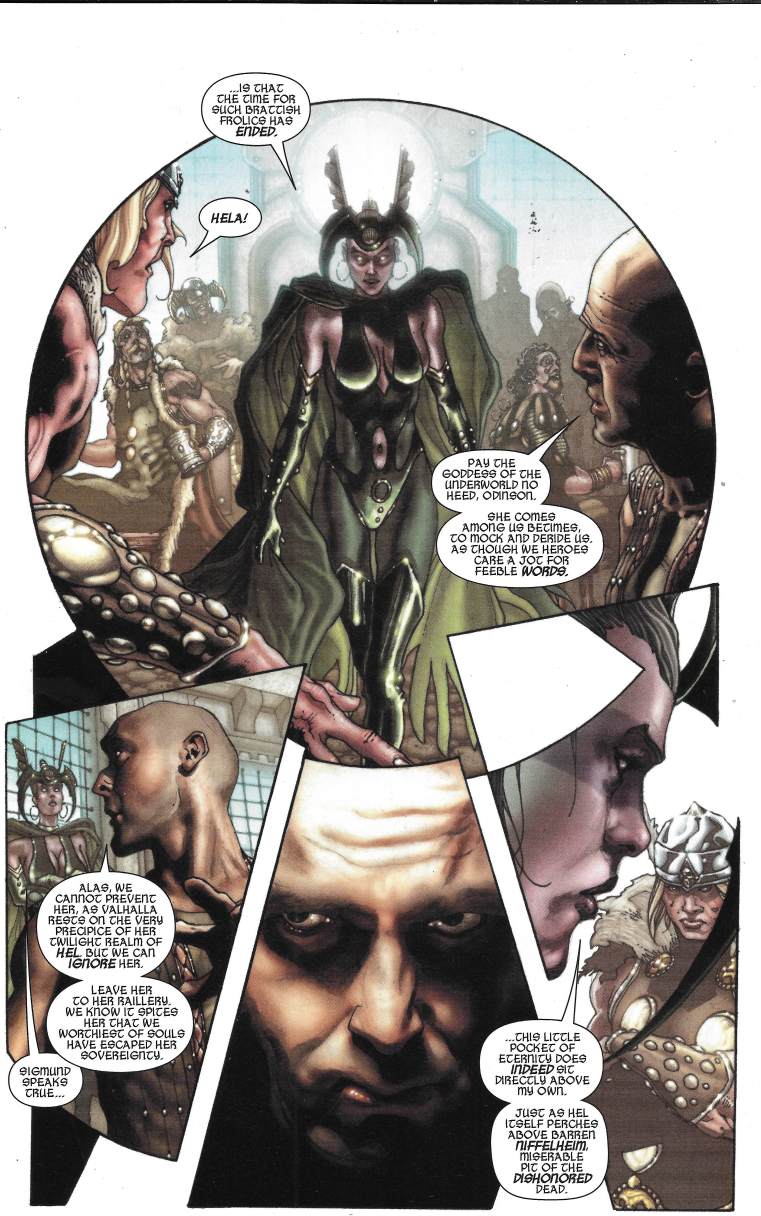 Thor asks why they don’t keep her out, and Sigmud (yes, the guy from Beowulf) tells him they can’t. He explains that she shows up to gloat and walk around as her realm sits somehow below this one, as if Valhalla, Hel, Niffelheim were more like flat plates than worlds.

And perhaps they are, because Hela is feeling EXTREMELY rebellious today and there is NO ODIN to stop her. Thor isn’t even himself, having lost his hammer of thunders. So, she does this… 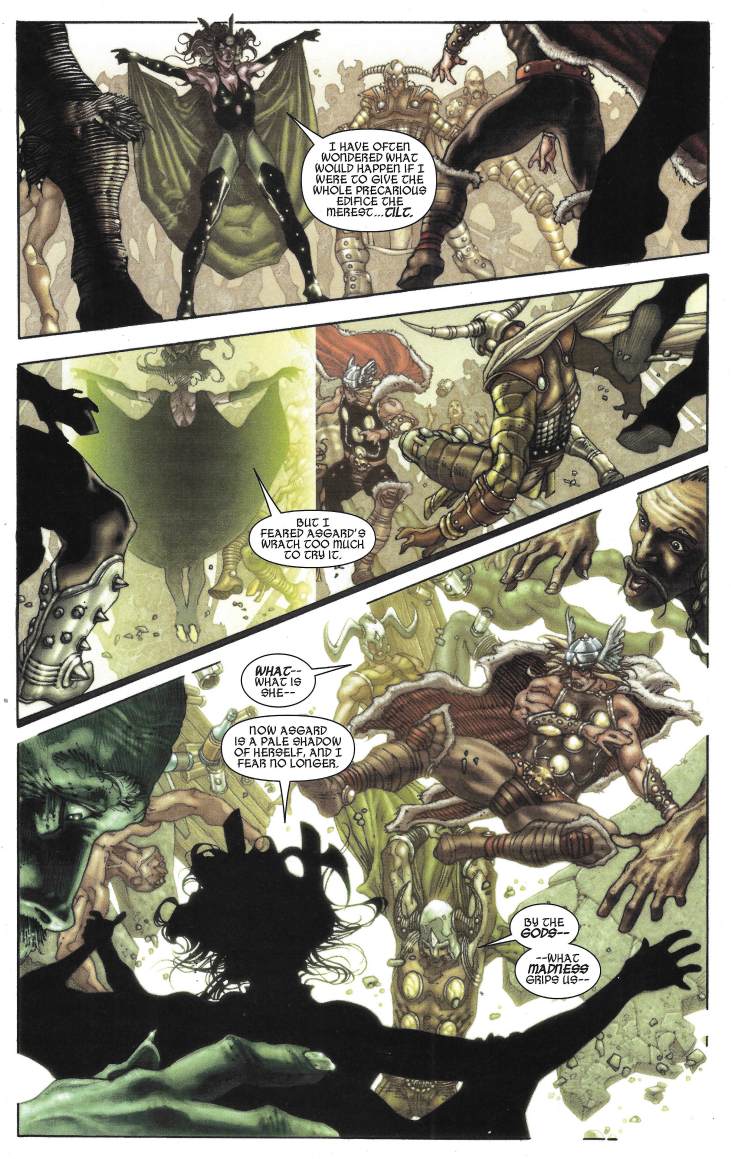 …and DUMPS ALL THE HONORED DEAD INTO HER OWN REALM OF DEPLORABLES. That’s right. She empties Heaven into her personal Hel and Thor can’t do anything about it.

(Get that Robert Plant scream from Immigrant Song playing loud and clear as you hit this next page.) 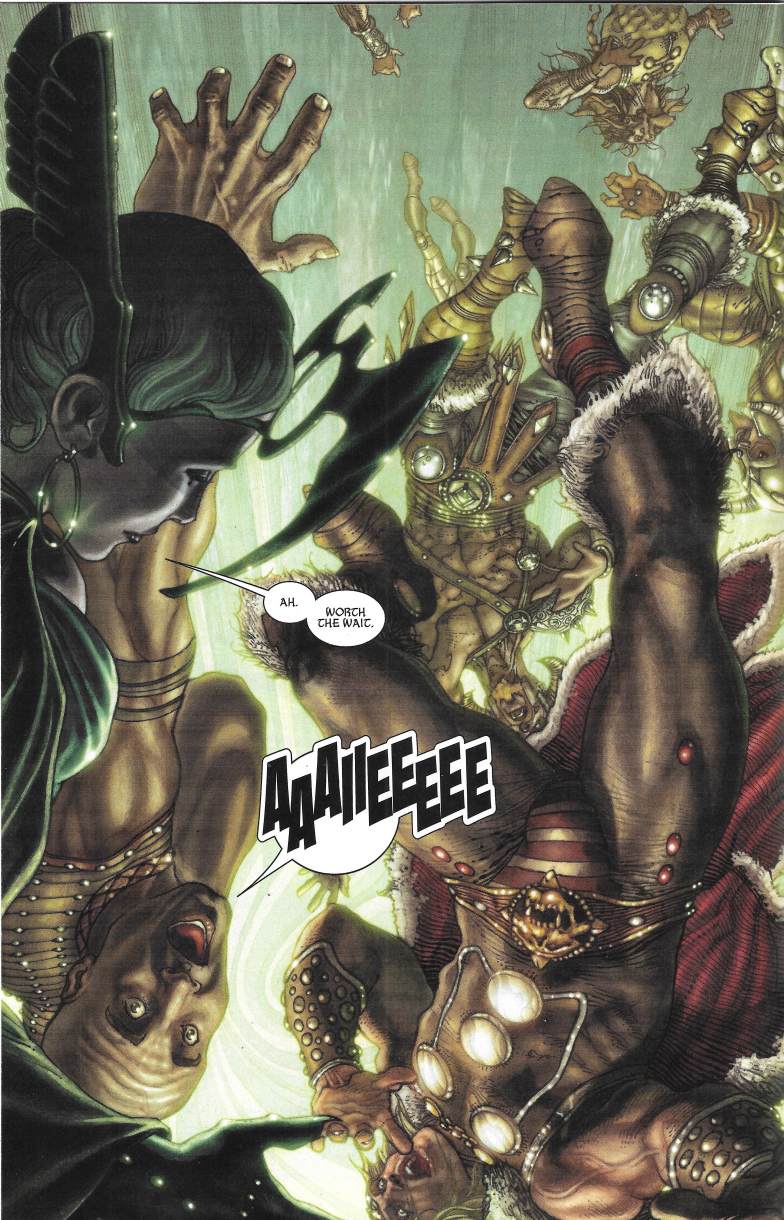 And speaking of how Thor can’t stop her, heck he needs saving himself… 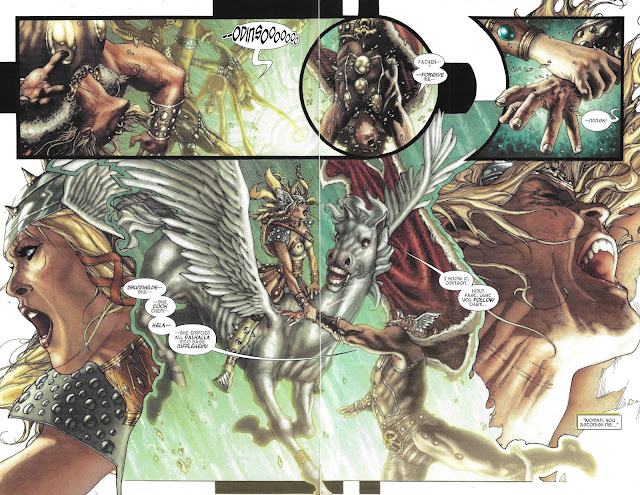 And with that Brunnhilde saves the god-of-no-thunder and I’m done because there is no more Hela parts.

If you want some great Hela action, look to the latter half of the Walt Simonson run of The Mighty Thor in either the color Visionaries line or in the black and white Essentials volumes. They are much better at showing this little lady. 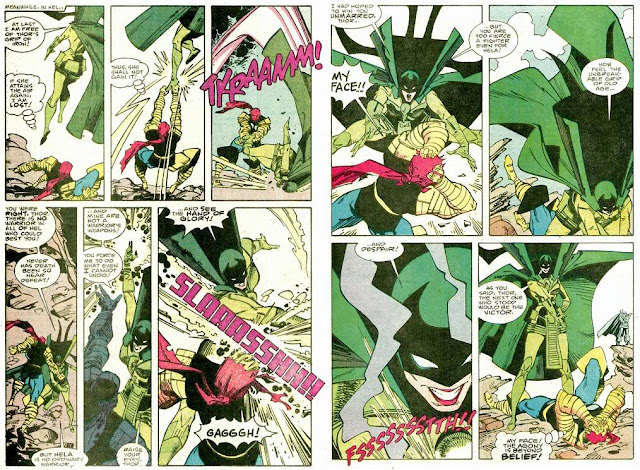 Or the new movie, which I hear is getting great reviews and sits with a high 90% on the Tomatometer right now.
Posted by SonOfCthulhu at 4:25 AM