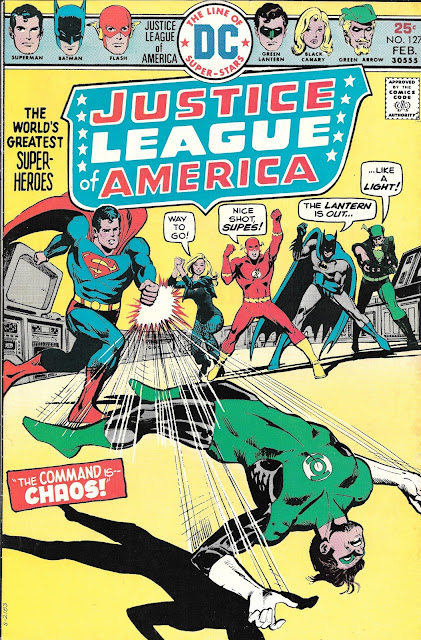 Possibly why they have their own Corps:
people keep punching them

There is no more famous punch in the history of the Justice League in-fighting than this one: 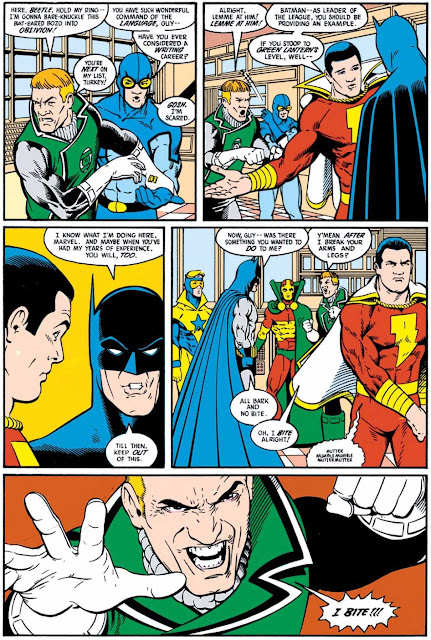 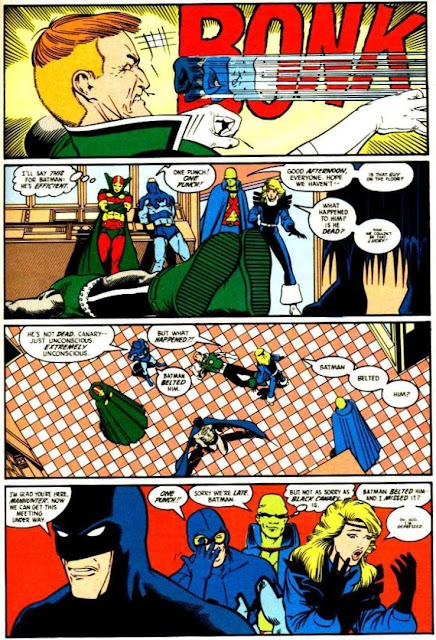 This little altercation occurred in Keith Giffen and J. M. De Mattis’ version of the League in issue number five. The artwork is drawn to perfection by penciler Kevin Maguire and inker Al Gordon. 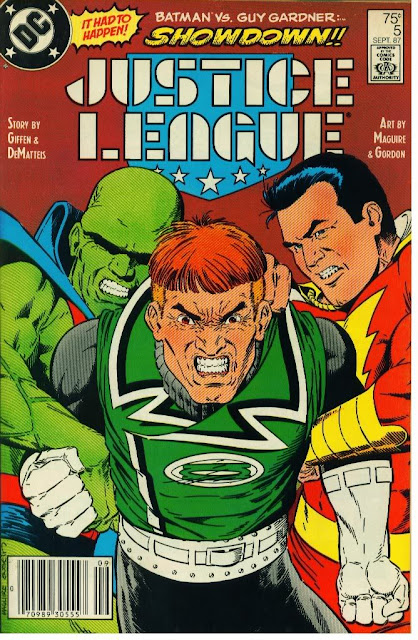 It truly is too well-regarded to even comment on, beyond saying that I thought this was a one-time deal, this punching Green Lantern thing. Turns out he’s pretty much the League’s resident heavy bag.

And to prove it, I thought I would do a little Title Bout thing featuring two OTHER times that GL got laid out by a fellow leaguer and then see which one was the better wallop.

THIS is “Round One”: the second of two-part story and here we go…

We begin with Red Tornado, Superman, Green Arrow and Flash confronting the villain of the day: The Anarchist and his three glowing henchmen. Last issue, these ruffians made off with a few UN delegates. Today he plans on kidnapping some more, but first he has to get around the League. 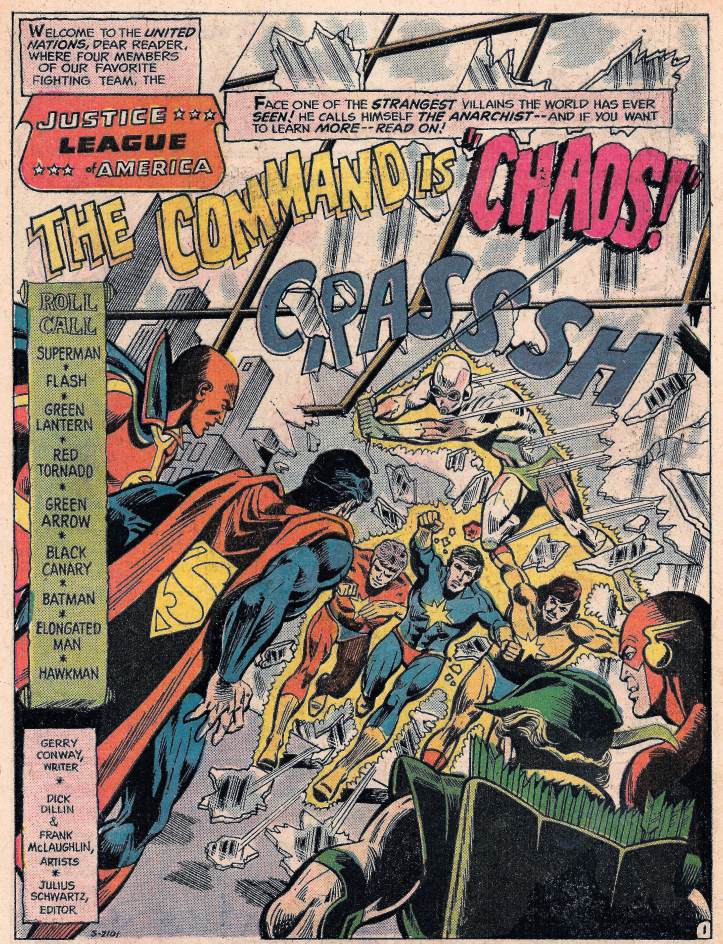 After their first offense, odds are in the Anarchist’s favor. First the Flash and Reddy just bounce off his henchmen’s force fields… 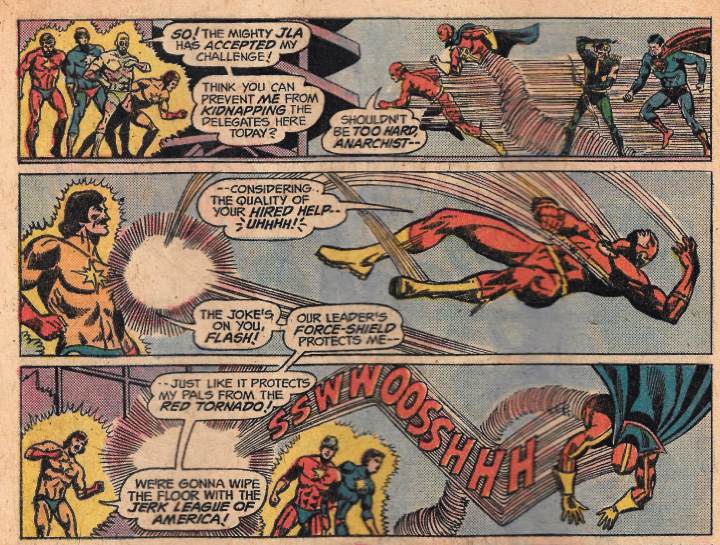 …and once he goes on the offensive, he makes Superman’s own belt attack him. Little concerned that Supes pants would fall down during this, but not that the belt would defeat Superman. Yet somehow it is. 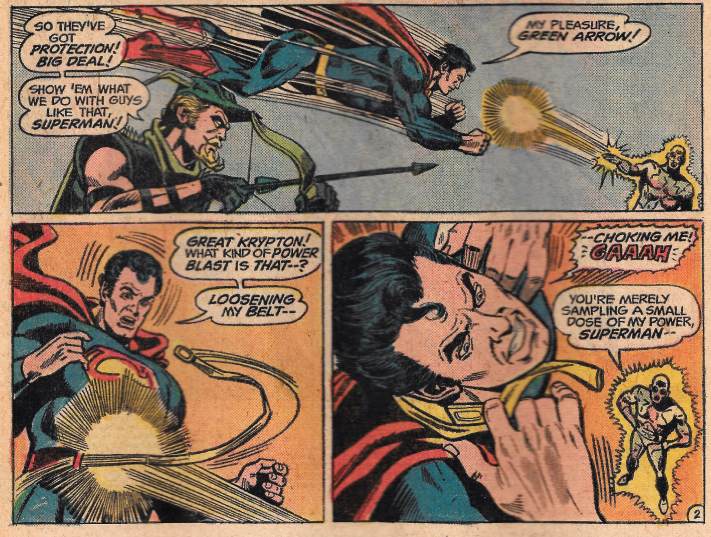 Meantime, the A-man causes Flash’s boots and Red Tornado’s costume to do pretty much the same. 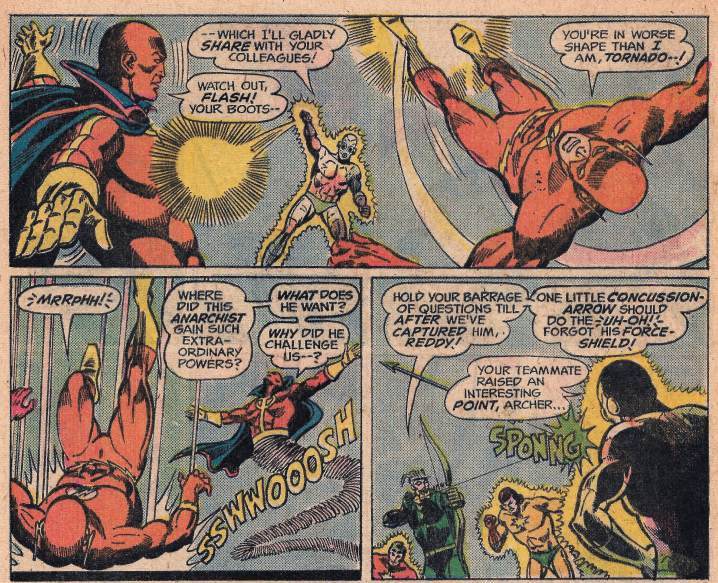 This leaves only Green Arrow standing. Against the Anarchist’s forcefield wearing hechdudes, GA doesn’t have much luck. 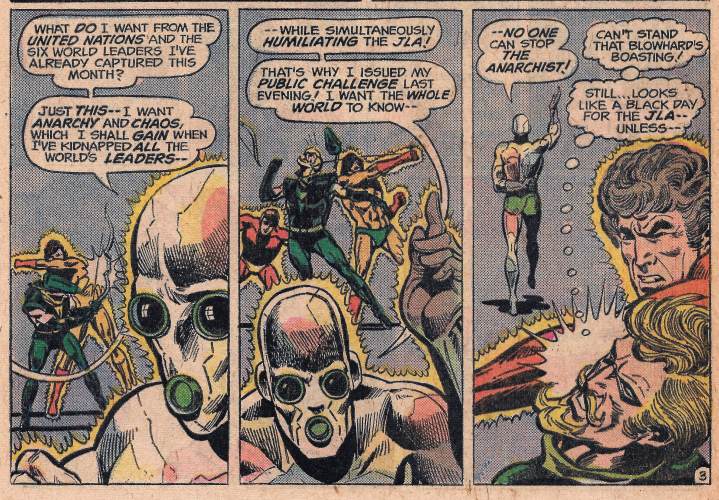 He does get to hear The Anarchist’s monologue, and all that blabbing give Ollie time to think up a plan of his own.

First, he pulls Flashes boots off with a plunger arrow… 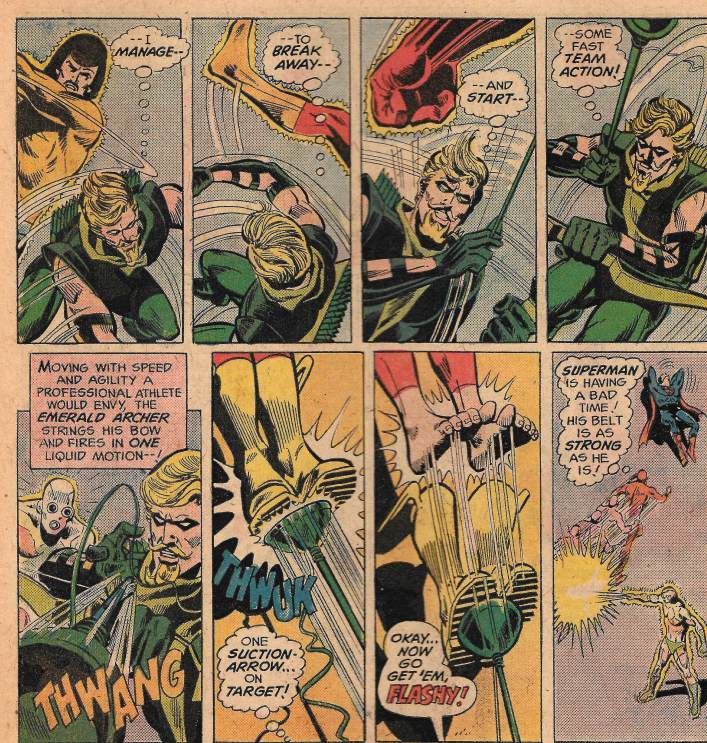 …then Flash darts over to Superman still struggling with his belt. Using magnetic science that does not apply to actual people, but somehow does here…

..Flash creates a magnetic field from each of them causing the belt to spring off Superman’s neck. Superman rushes to stop the Anarchist, but is fouled up by his pants falling down.

No, wait that doesn’t happen. GA goes for the Anarchist and nabs a bit of cloth, while Superman (with pants still up) drags the helpless Red Tornado out into space, where his spinning will cease. 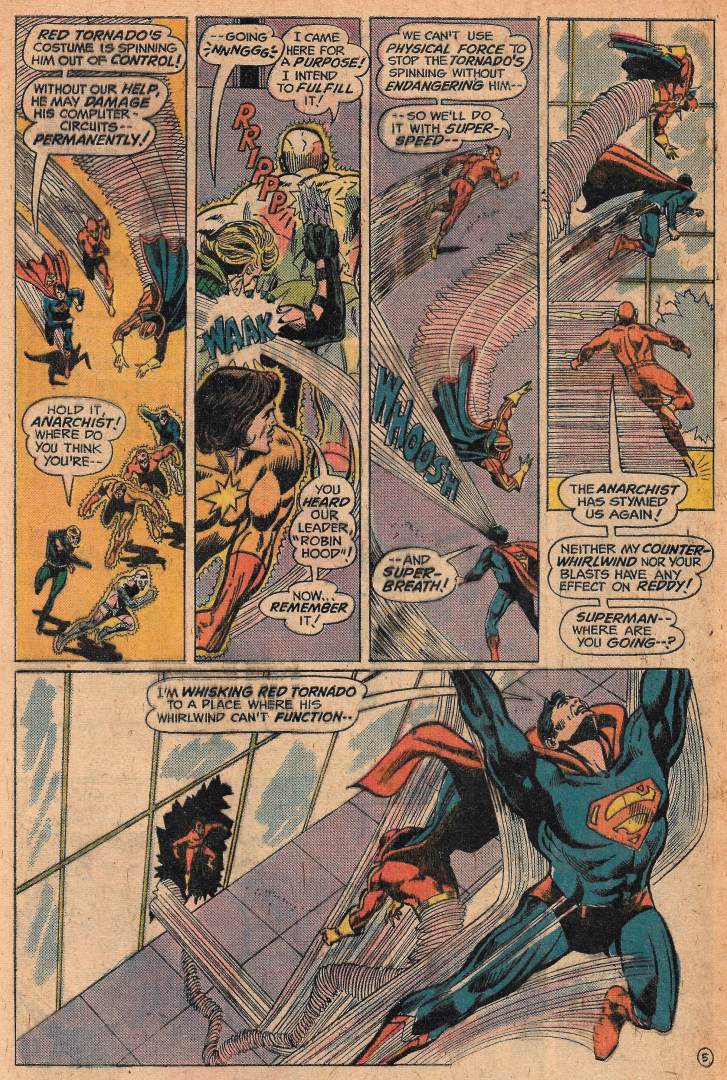 By the time he makes it back, the Anarchist has made off with all the dignitaries, and the JLAer’s are in some hot water. 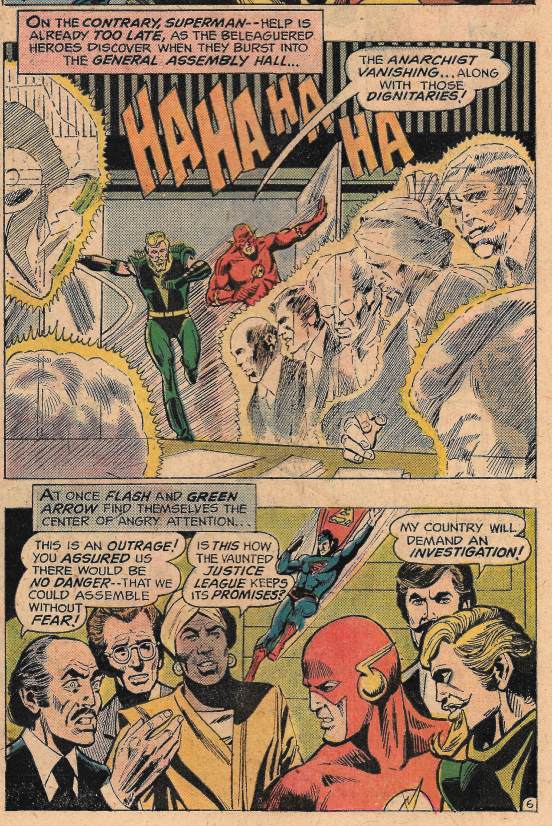 Supes is trying to look big picture and hopefully discover the identity of their foe. I’m hopeful, but big blue is no Batman, so only time will tell. 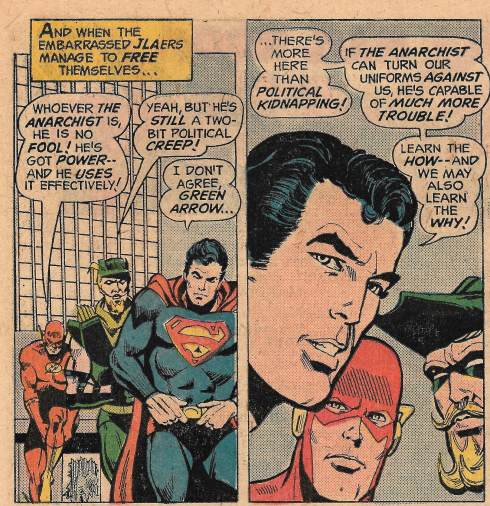 Speaking of time, it appears that for Hal Jordan, it is time to recharge his ring. Unfortunately, he’s not the one pulling the strings to walk to the power battery. Someone has mesmerized Hal into keeping his ring full. The question is who? (and was this answered last issue? That’s my question.) 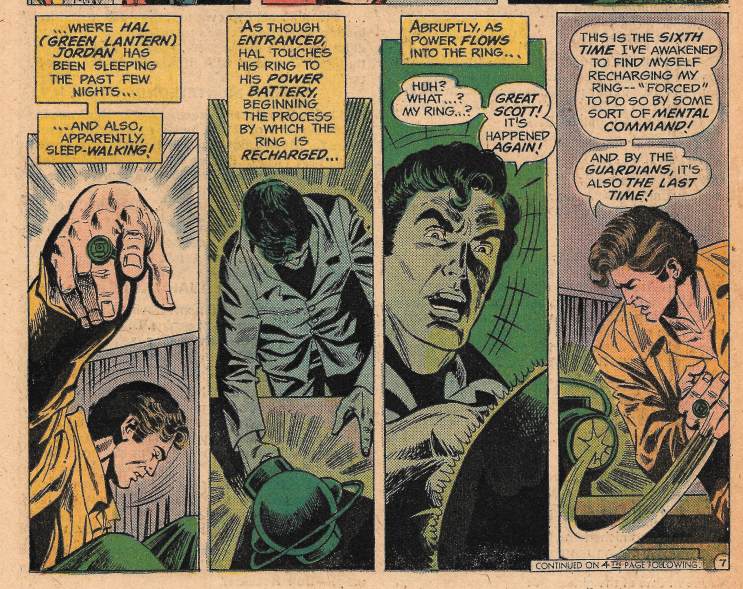 Hal gets upset, knowing he’s a pawn in someone’s plan. He changes duds and heads back toward the source of the mental commands. 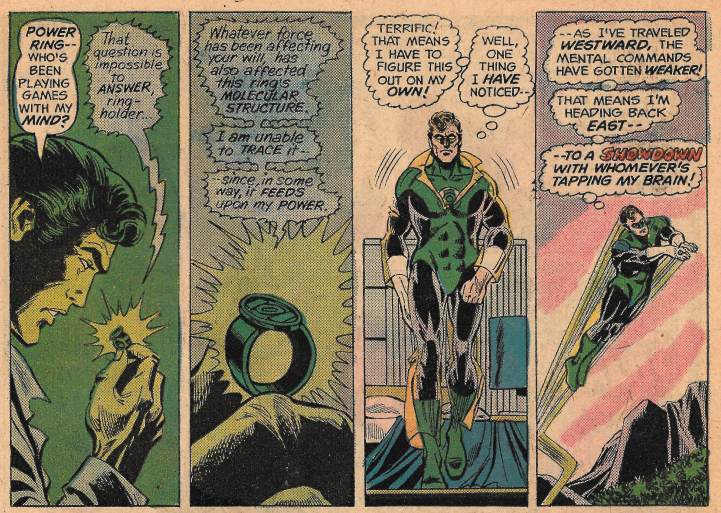 As this happens, Lois, Clark and Steve Lombard are all heading to a religious conference of reverend Simon Elis at the Metropolis Forum. Steve’s got his leg in a cast due to a recent injury.

Simon comes on, wow’s the crowd, and then heals Steve’s leg! 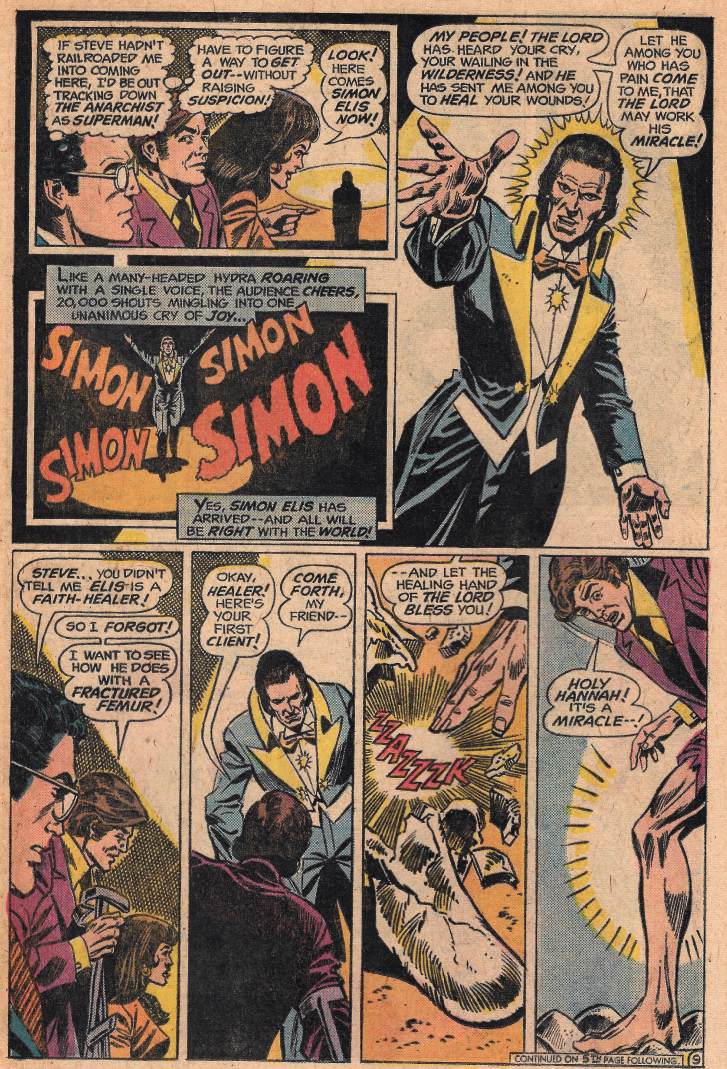 Clark uses x-ray vision to ensure the leg is legitimately healed, and while listening to the healer, decides that Elis has to be the Anarchist guy. He needs a hasty exit though, and he gets one with a little heat vision and a hotdog vendor. 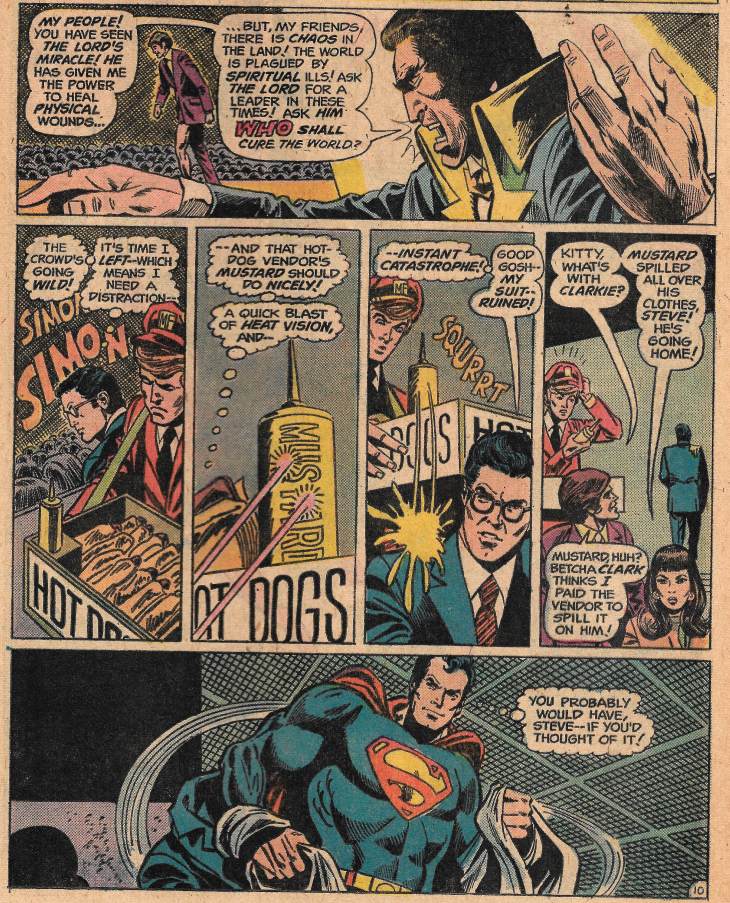 A completely different team of leaguers respond to his call for help in capturing Elis, but they are quickly incapacitated by Elis’s force beam…

…and the misfires of GL’s power ring. 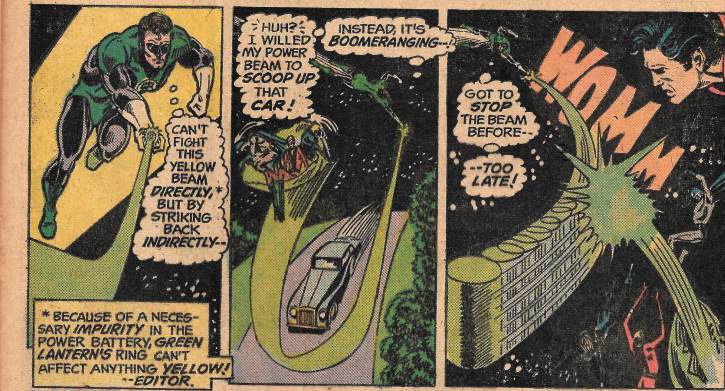 Hal realizes he’s hurting more than helping and stops using his power ring. Superman goes in to save the falling Leaguers, only to have the disappear, as does Elis’ coach. Only then does GL mention his odd power battery problem. 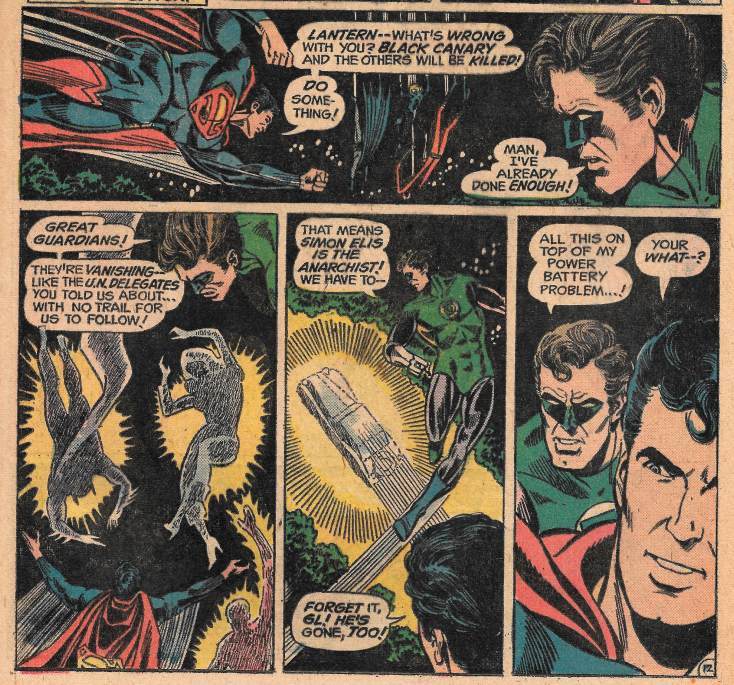 The pair quickly deduce that Elis must be behind that too. Somewhere in here I think they are stretching things a bit, but the beam was yellow… eh, still hard to blame all of this on one guy, but I go with it because I’m presented with no other suspects. 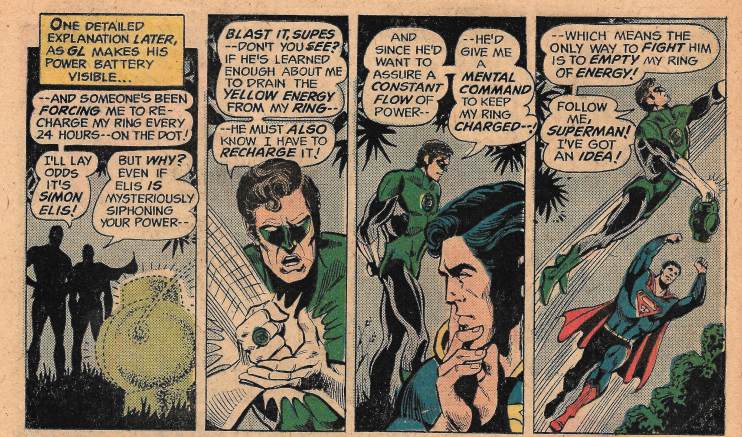 The Brave and Bold duo try draining Hal’s ring, to no effect. There’s a failsafe making that impossible. Because they are out of options, the pair checks in at Justice League Headquarters. 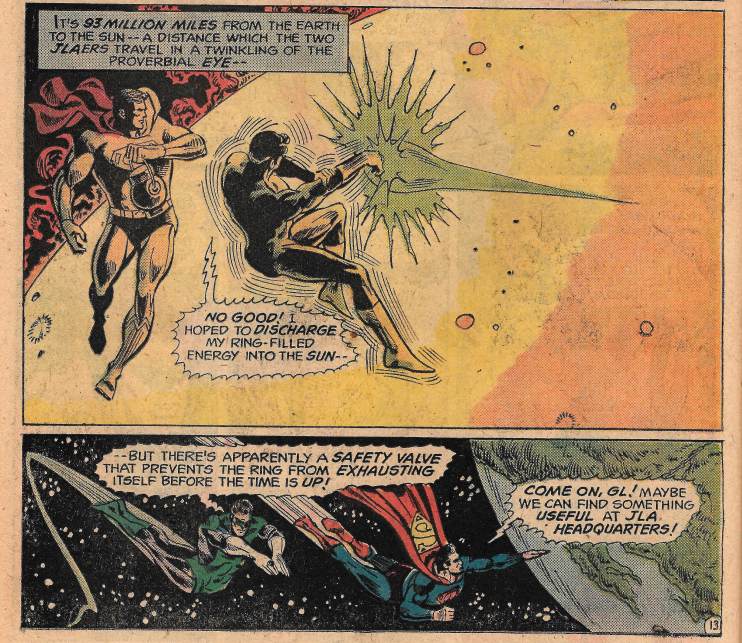 …where it starts to happen again. Leading Hal to beg Superman to hit him. Hit him with everything he’s got! 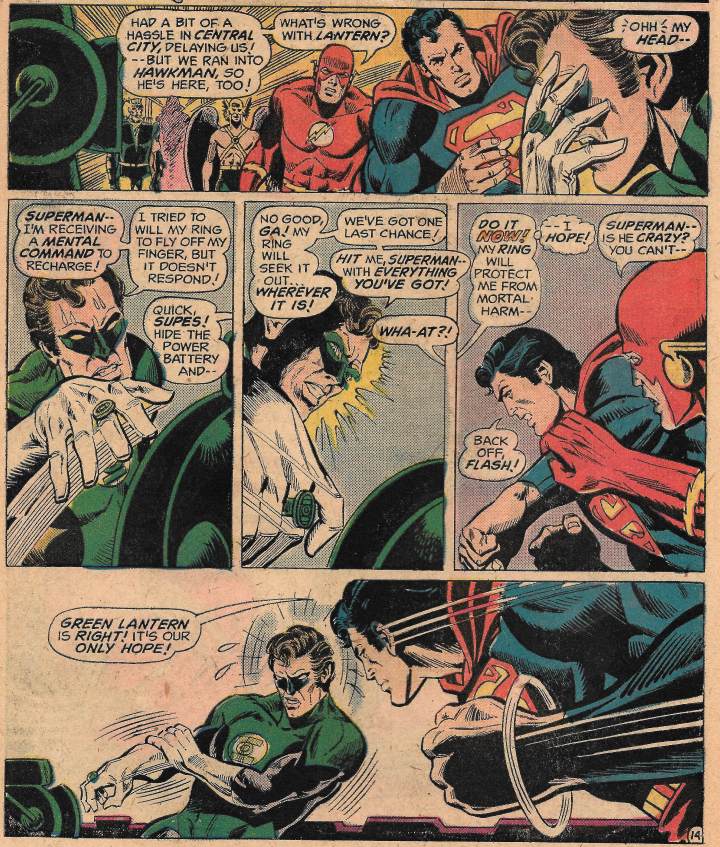 And there’s the windup… 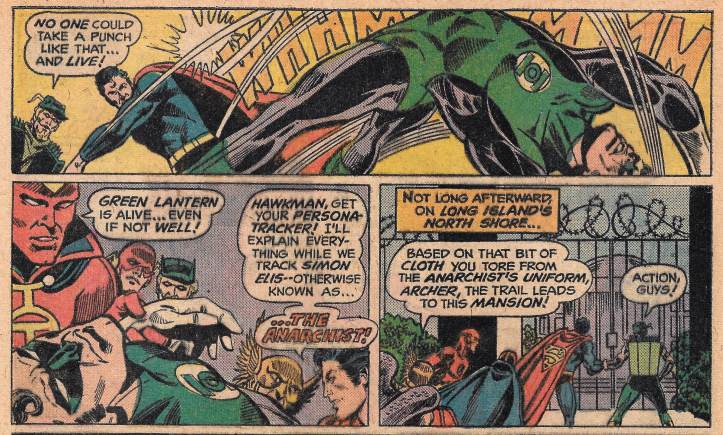 … and the pitch! He’s OUT! Perhaps forever!

Now that Simon Elis can’t pull these kinds of tricks on them, the original four take the point in rescuing their comrades, the missing delegates, and capturing the Anarchist. 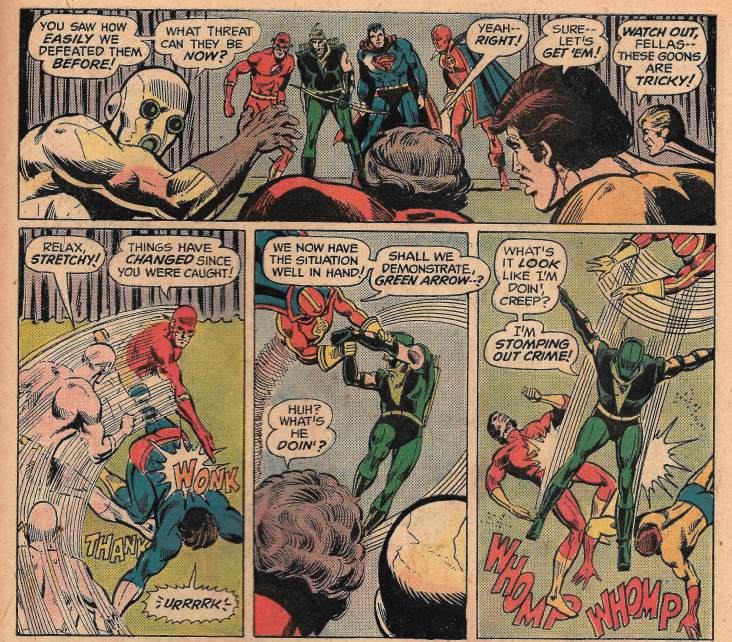 When they bust in, everyone is tied up. I kind of thing Ralph or Batman would be out of those ropes by now, but maybe there is a super-strong belt involved somewhere. 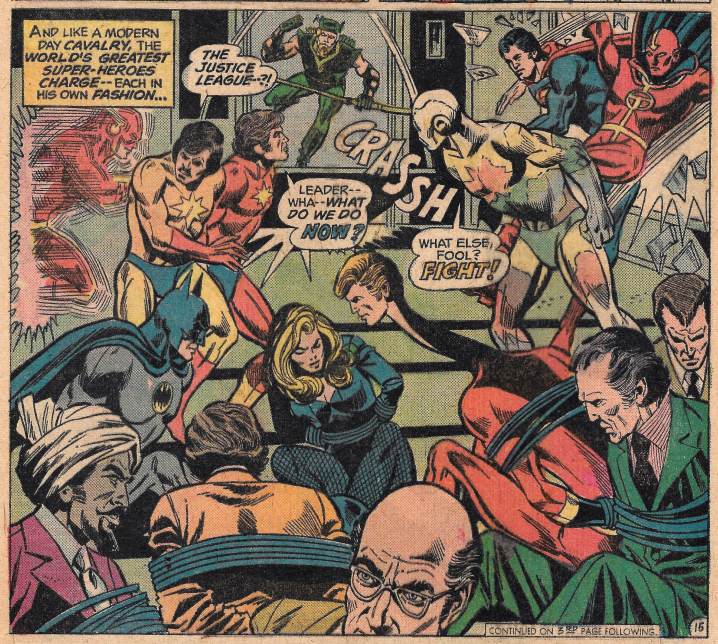 Knowing the bad guy is out of energy, the heroes have some fun knocking the henchmen around. Kind of giving them back the licks they gave out in the previous encounter.

Simon Elis has a few more finger sparklers to aim at Superman, but nothing major enough to take any of his clothing off. 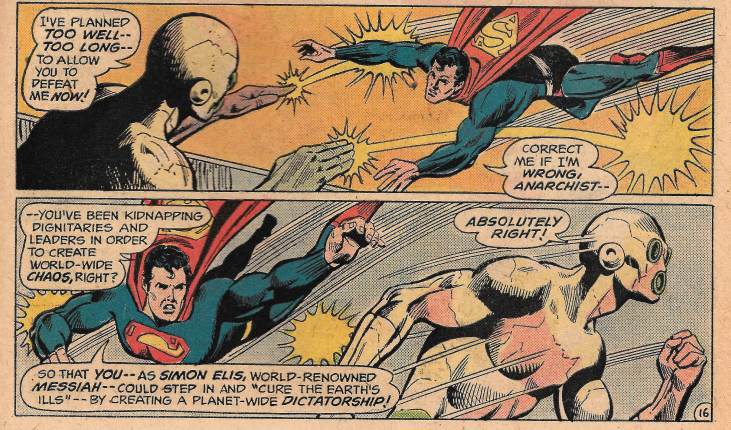 In the end, the Anarchist is forced to bolt off in retreat, but running from Supes has never gotten anyone far, both figuratively and literally. 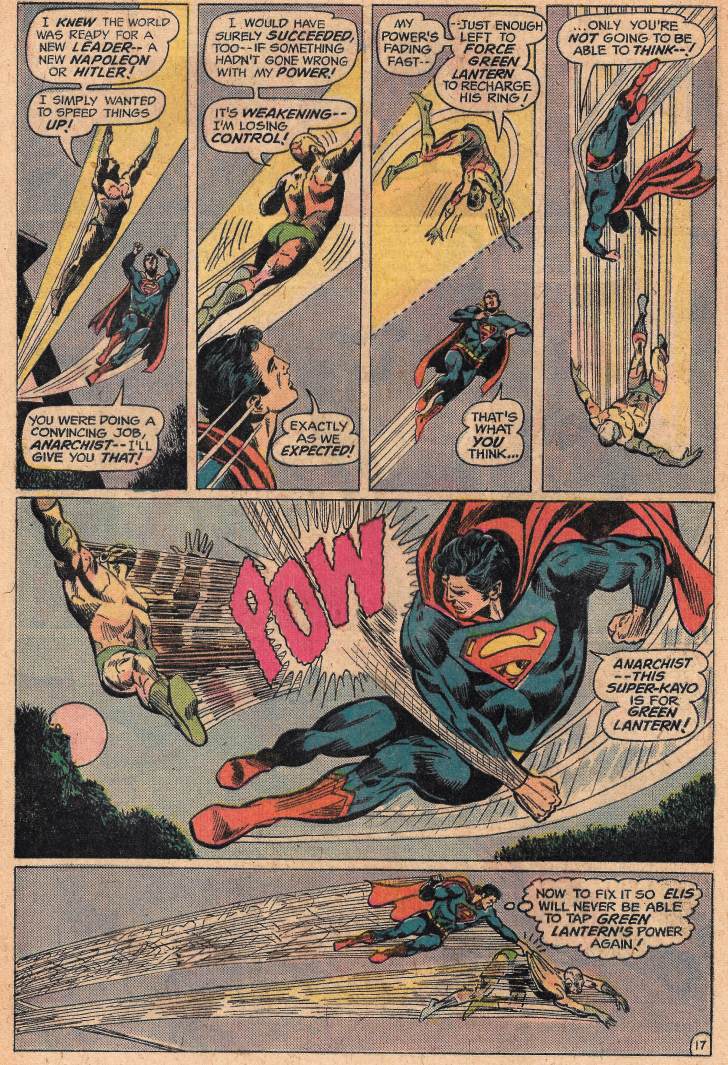 Supes bops him a good one and even though he says it is for Green Lantern, I kind think there are some lingering resentments from having made him fight his own clothing.

And in the end, the league wakes up Hal and has him charge his ring again. 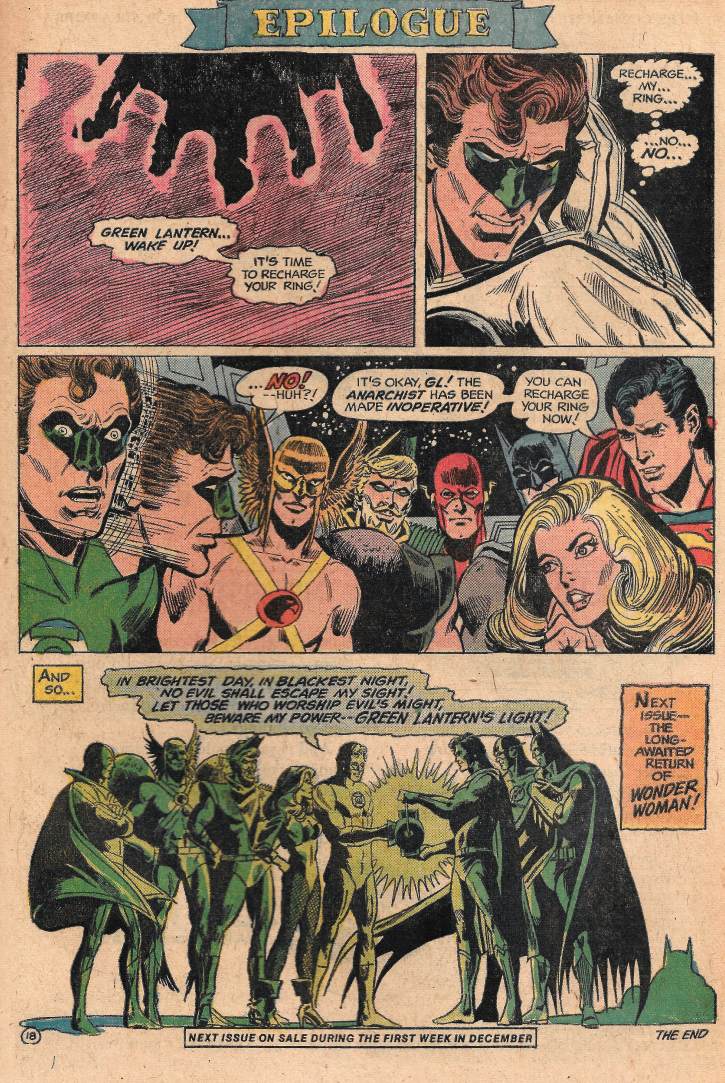 This first issue was a solid hit, but no JL #5. There really wasn’t an emotional component to the punch. We’ll see tomorrow if that counts against it.
Posted by SonOfCthulhu at 4:07 AM