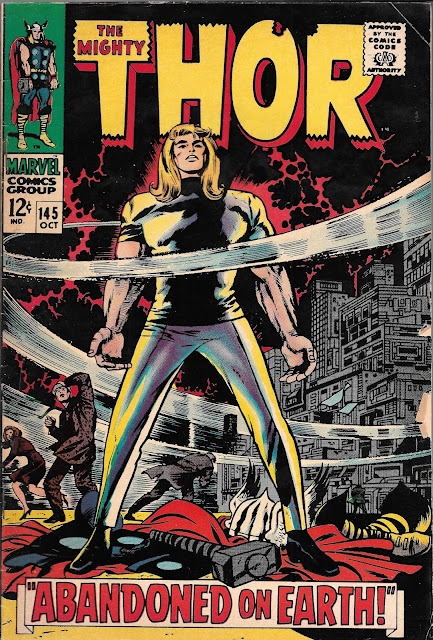 Not sure where I first read this comic, but I knew the moment that I saw it in Half-Price that I had to own it. It wasn’t a typical $5 book, either. Yes, I shelled out for it and I’m glad I did. It is one of the few key issues I own and allowing it to mingle with the rest of the Crapbox books doesn’t do it any harm.

This tale was first spun way back in 1967, at a point in my life where I was possibly learning to walk for the first time. It had to be reprinted at some point because I recall the entire story although I know this is the first time my mitts have ever touched the actual pages of this book.

I’m including it because it mirrors a bit in that original Thor movie, where Thor finds himself without his godly might while stranded on Earth. It’s a trope that has been recycled in Thor, and due to the “hammer in the desert” setup, the first movie probably closer mirrored a story that occurred in 2006.

But this was the first time I’d seen this storyline and it is possibly the best, given we have Kirby doing art like only he can and Lee filling in those bubbles with his eloquent verbosity. Let’s get to it, cause I know you’re itching the way I am to read it.

We begin with Thor turning over two VERY Kirby villains to the local law enforcement officers. Don’t know who these gents are, but love, love, LOVE the Celestial look to their outfits. Also I don’t find Colletta’s inking to be so bad in this one, perhaps because you’ll see as we go that there isn’t a bunch of small panels. 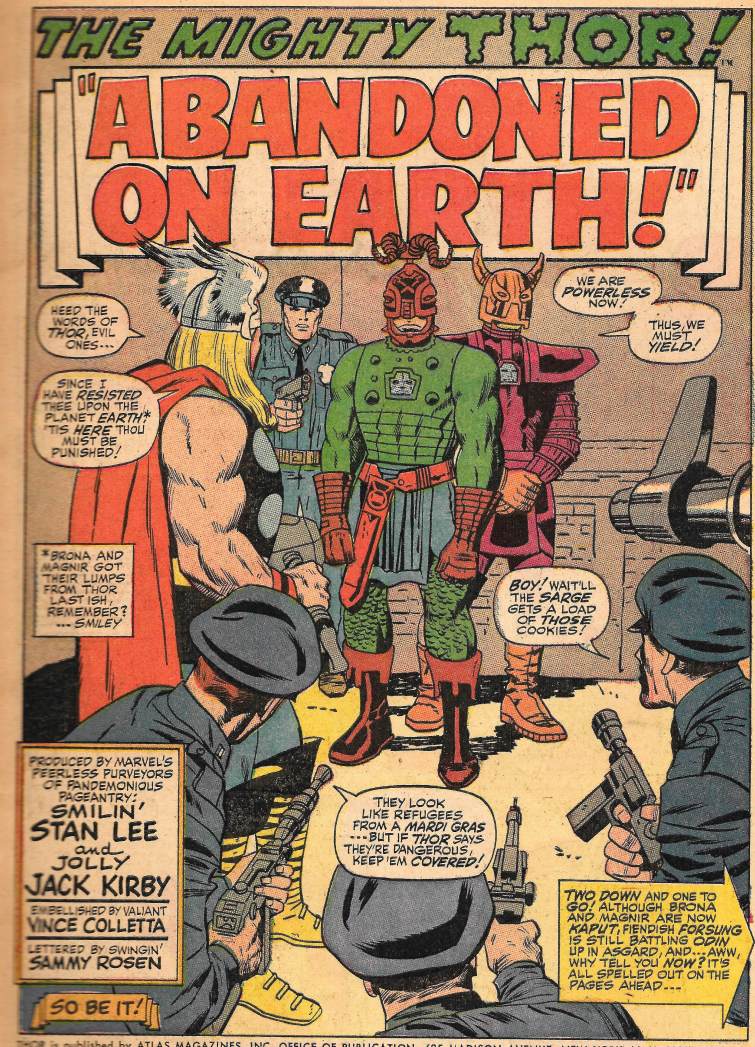 From the next page we learn the pair turning themselves over are Brona and Magnir. Also that Balder and Sif were instrumental in their defeat, that all three Asgardians appear to be depowered somewhat by Odin so he can use their might to battle something called Forsung, and that Balder has set his heart on Sif although she has eyes only for Thor. Also that Balder could have any woman on Earth, should he choose to get out of his funk and move on. 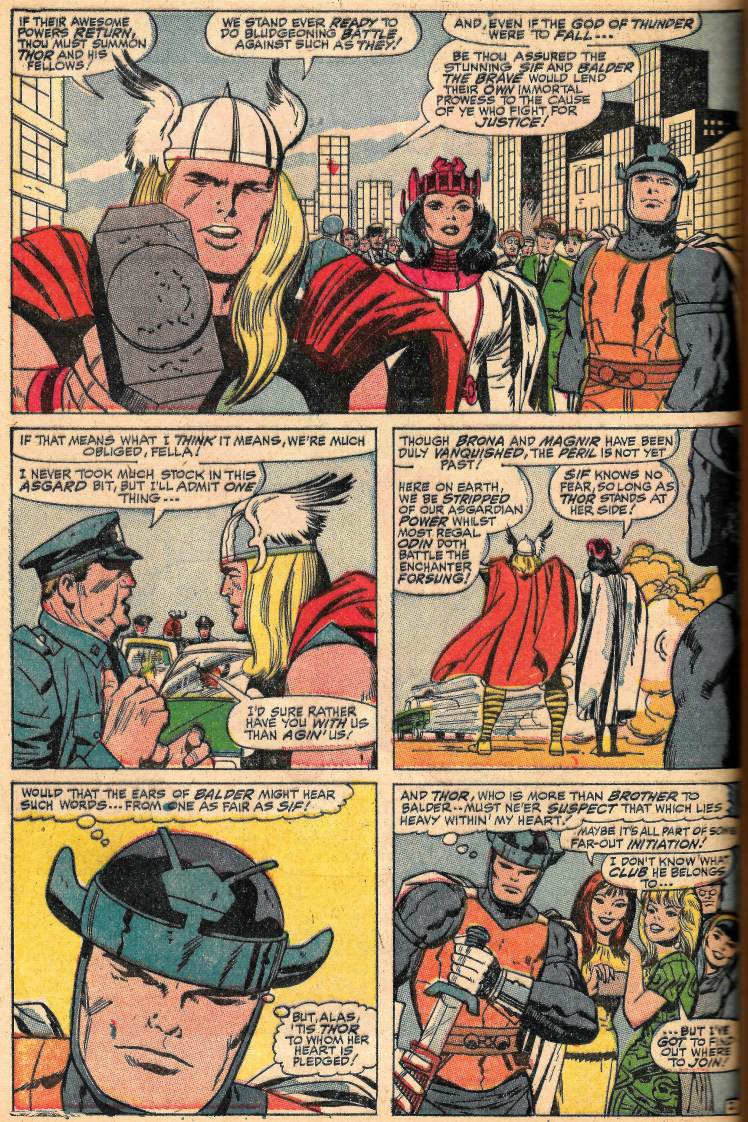 We then swing over to Odin, who had just finished defeating Forsung and in a show of victory, destroys his costume’s Transformers logo. 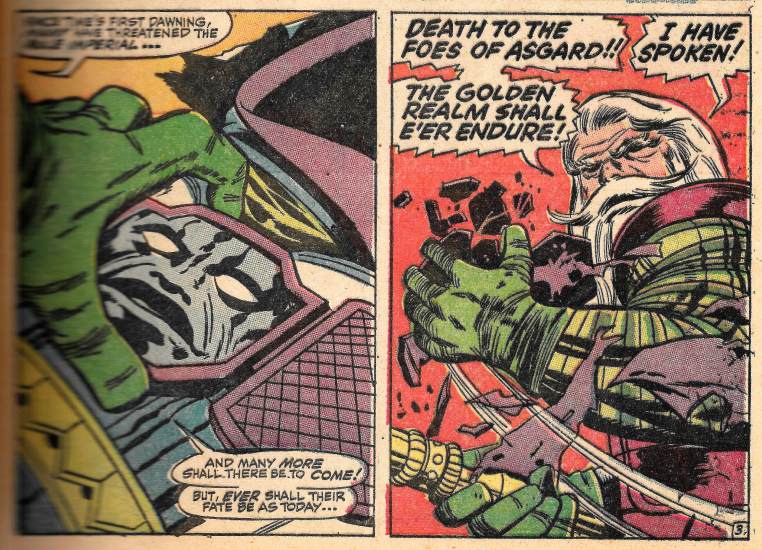 Then Odin goes all YELLING IN ALL CAPS, which is odd since the internet hasn’t been invented yet. He tells everyone present not to piss him off – EVER! And then he sends a bit of the Odin force to take care of Brona and Magnir, who were agents of Forsung. This stuns the boys in blue standing guard over the pair.

Odin puts the ultimate wammy on them and poof! They are banished to lost Limbo, which I assume is worse than just regular Limbo.

Next our raging god turns his sights on to his son and his stalwart companions. Maybe things would go different, but Odin happens to overhear this… 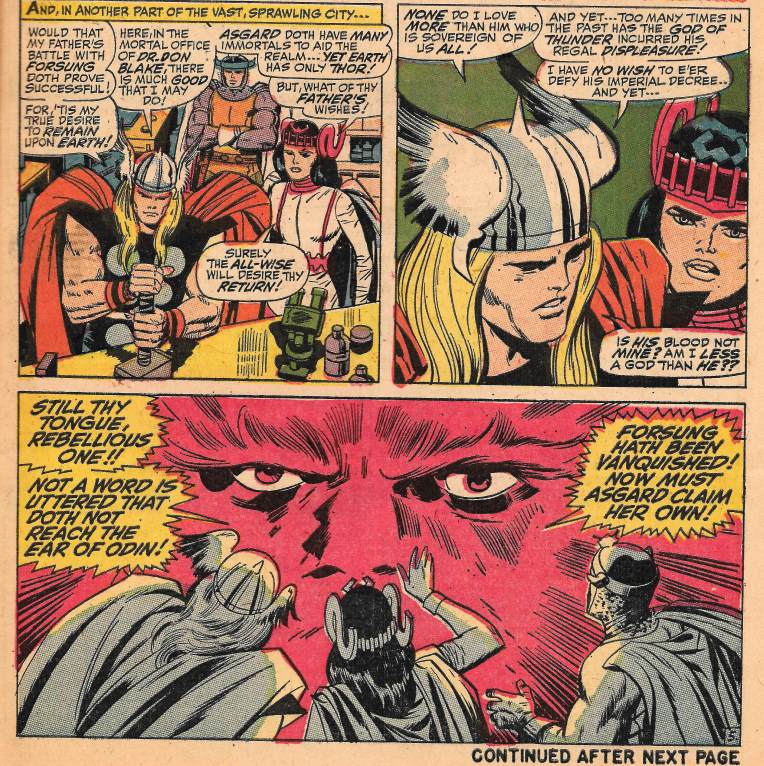 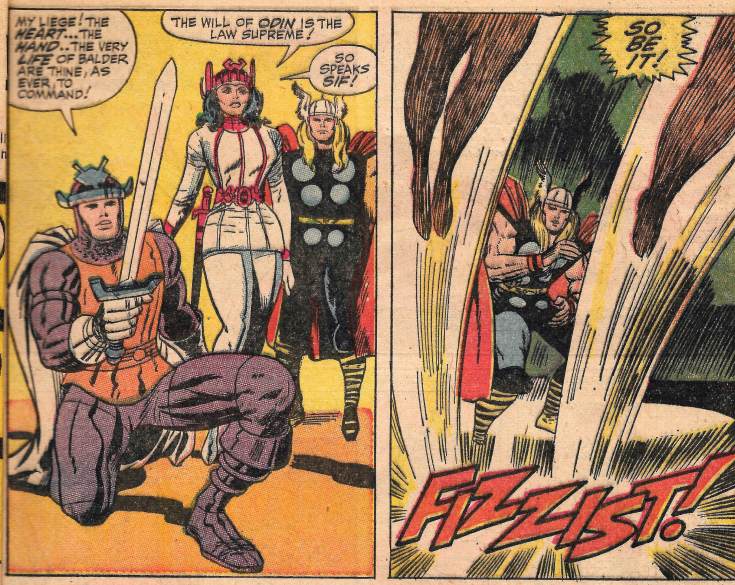 Thor, however, does not. And for that he pays the price and is stripped of his godliness in a panel of Kirby-Krackle. 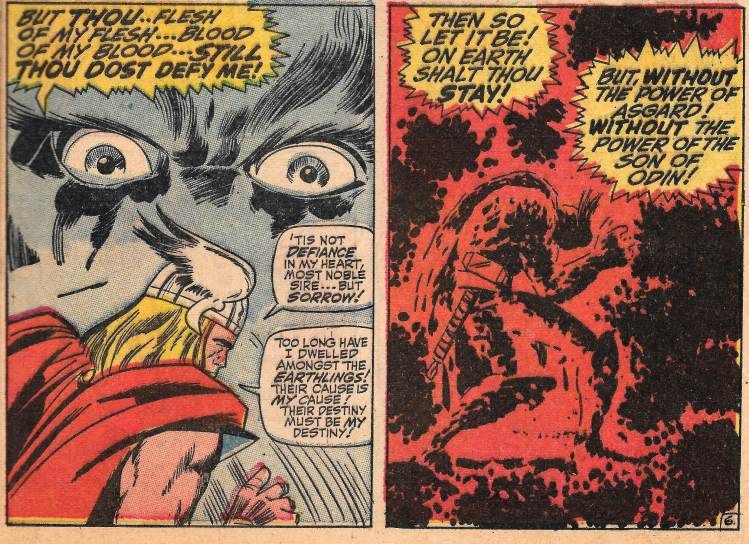 As Thor crumples to the ground, Odin makes it clear just exactly what he’s taken away from his son.

And with no ceremony, Thor is dumped in the office of his alter-ego Dr. Don Blake’s office for this janitor to find. 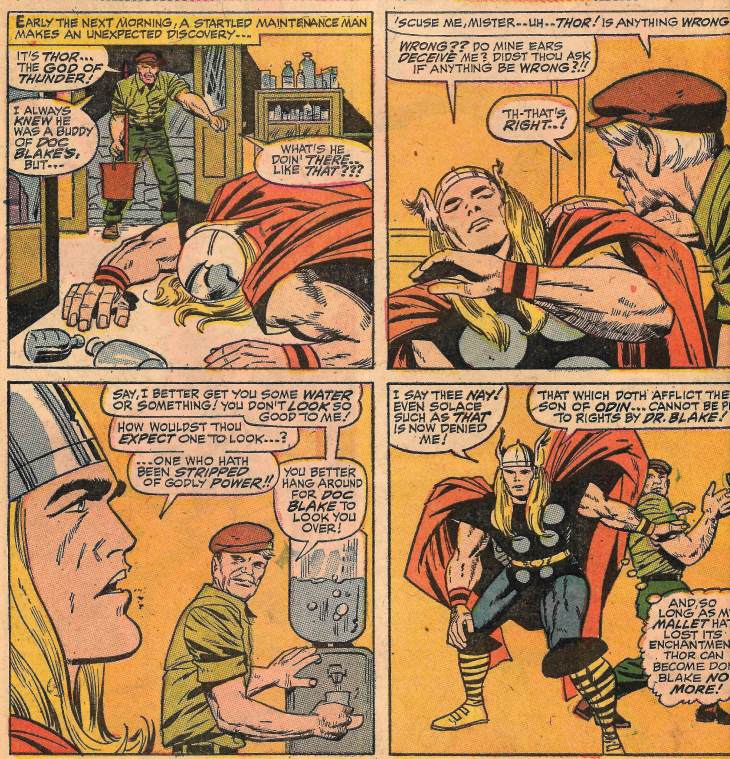 He’s left to take the elevator like the rest of us and mull his fate as a powerless mortal over. 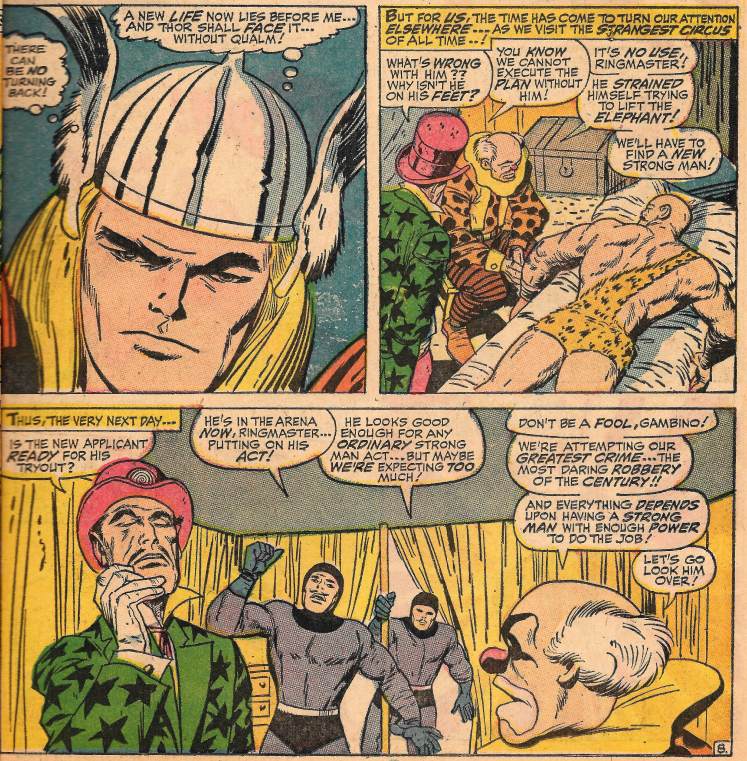 Meanwhile, nearby there is criminal mischief afoot by none-other than the Ringmaster and his infamous Circus of Crime. They’ve lost their strongman, however, making a natural opening for the former god of thunder to insert himself into their troop unknowingly.

The first candidate for the position doesn’t fair so well… 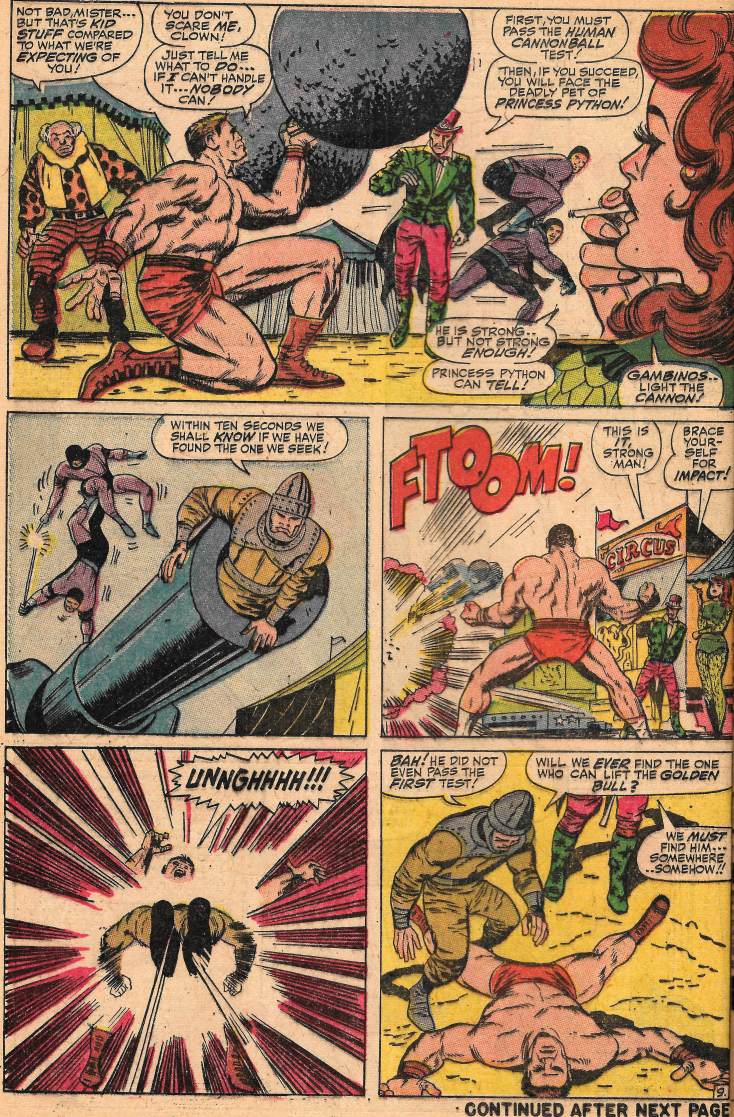 …which is when Thor wanders their way. He gets a bit caught up with Princess Python's reject from the Anaconda movie franchise first. 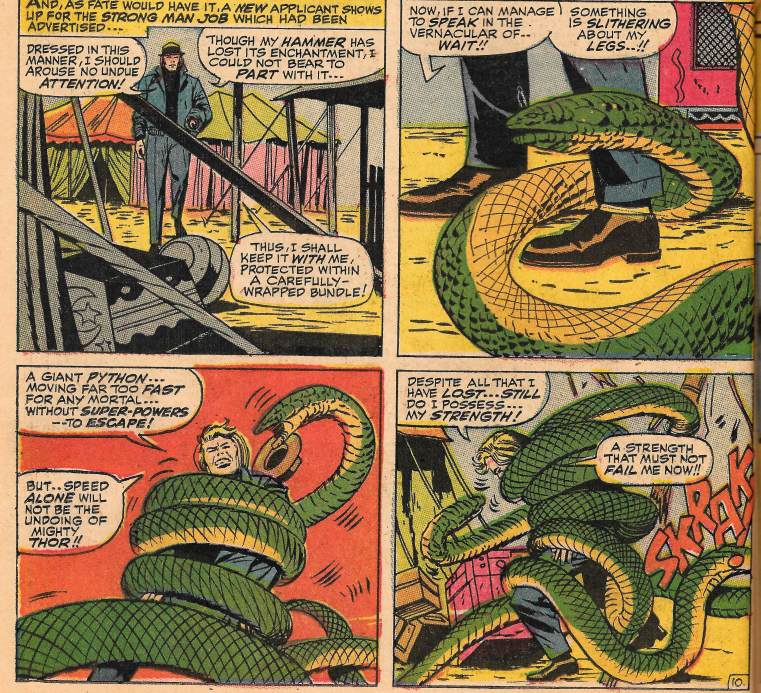 Which is nothing when compared to Thor’s still beyond human strength. I LOVE these four panels. Something about the way Kirby has with all those coils… 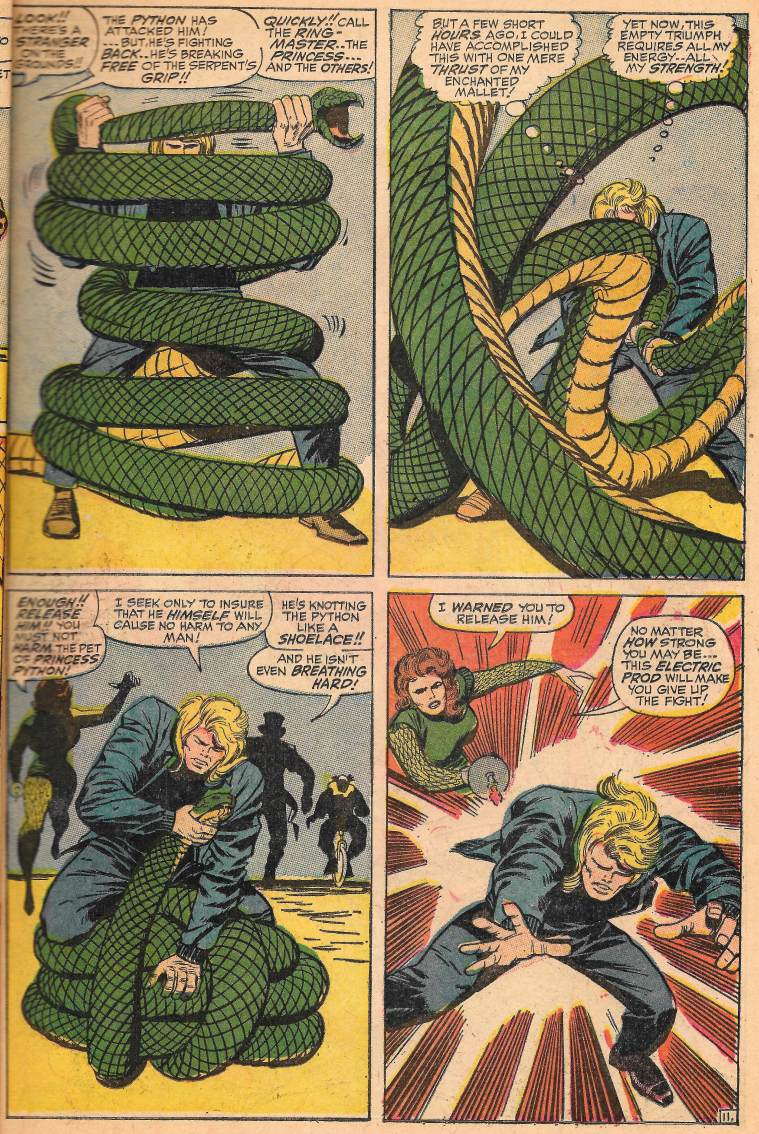 And this poster-sized full page shot of the entire circus is hard to beat too. 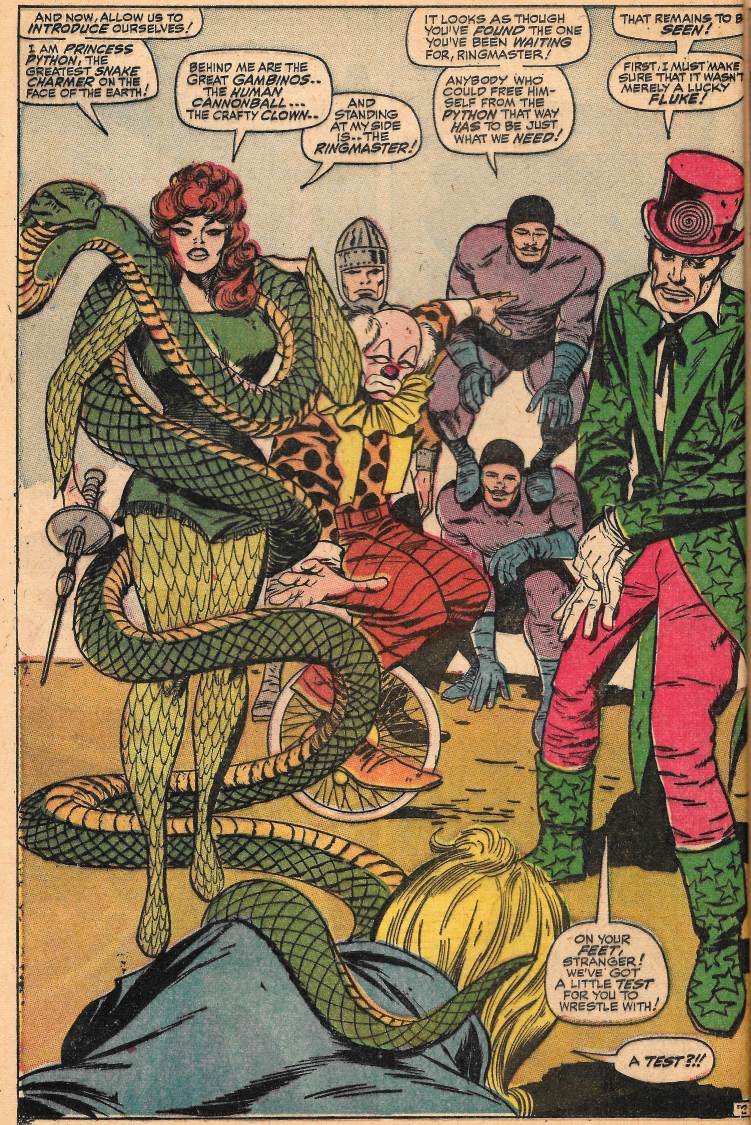 We get a bit angsty as Thor laments his loss of power making Mjolnir not much more than a fancy paperweight. 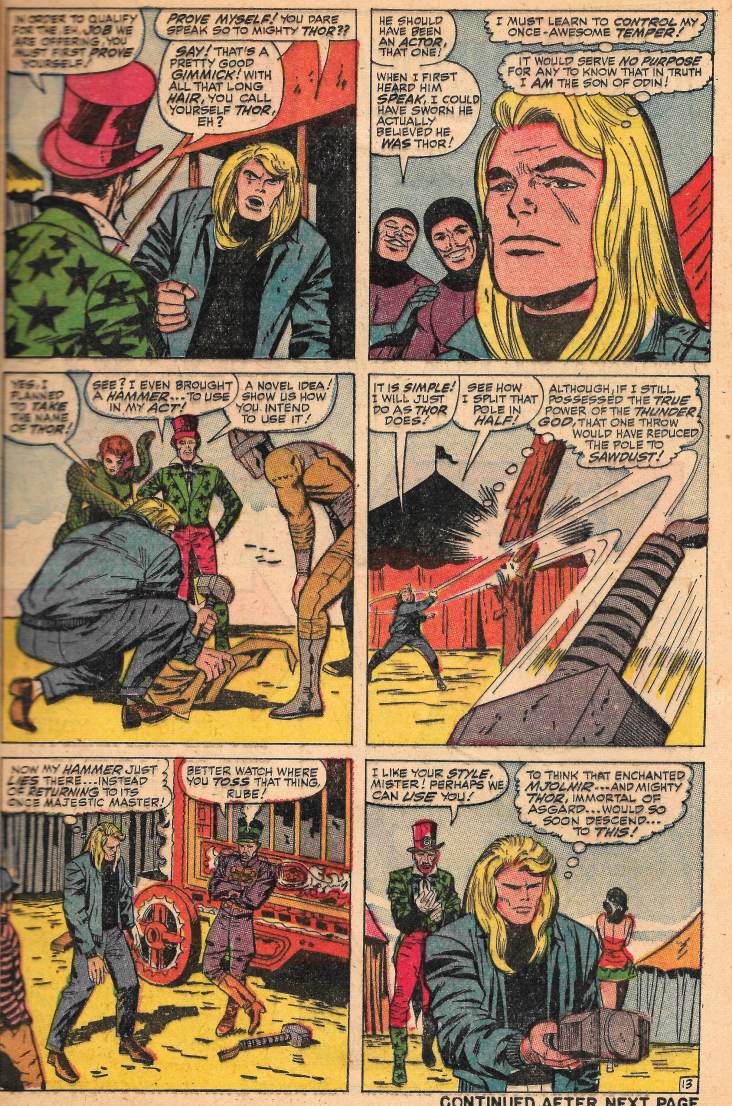 Sadly, Thor is so caught up in his own head that he allows the Ringmaster to hypnotize him, allowing the criminal circus leader to put Thor’s strength to the ultimate test… Appears they need someone of immense strength to lift and carry a golden bull statue that they are planning on stealing. And they conveniently made a bull statue of the exact shape and weight to test their prospective strongmen with. I like how Kirby renders the bull like a crude rock statue. And I love the shot of Thor bending underneath it and his shrugging off his jacket as he ascends the platform. 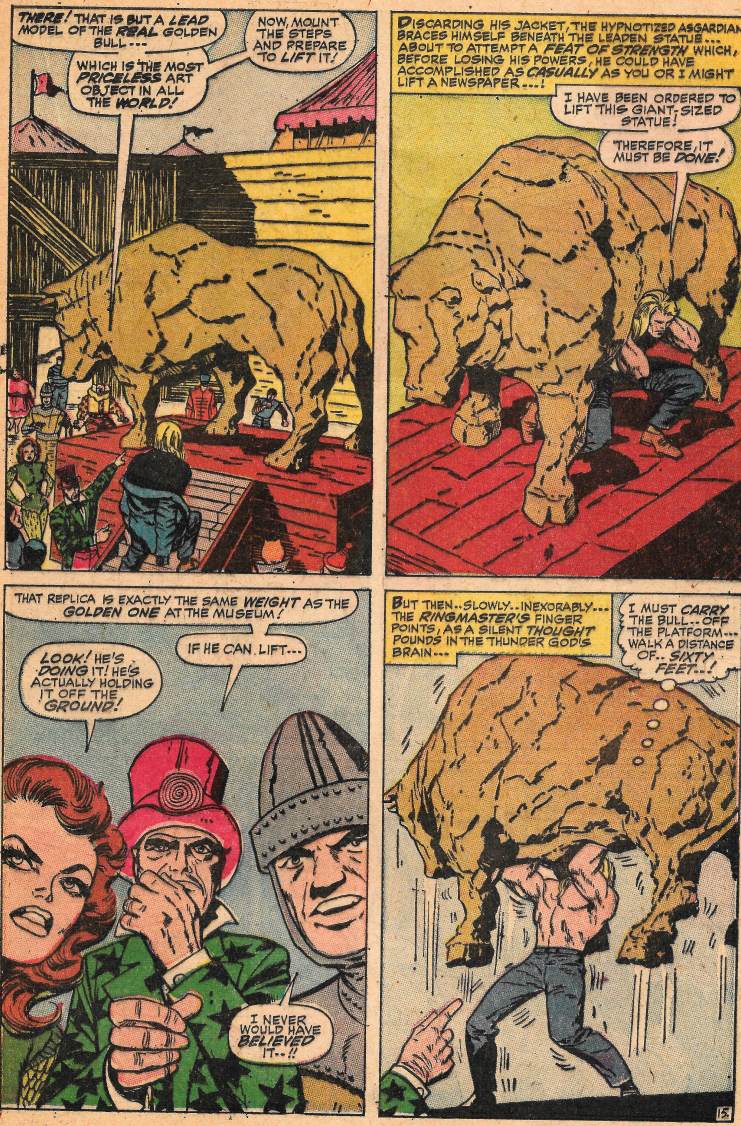 Of course Thor passes this test with ease and we are left to wonder how long he will find himself a slave to the Ringleader’s mind control. 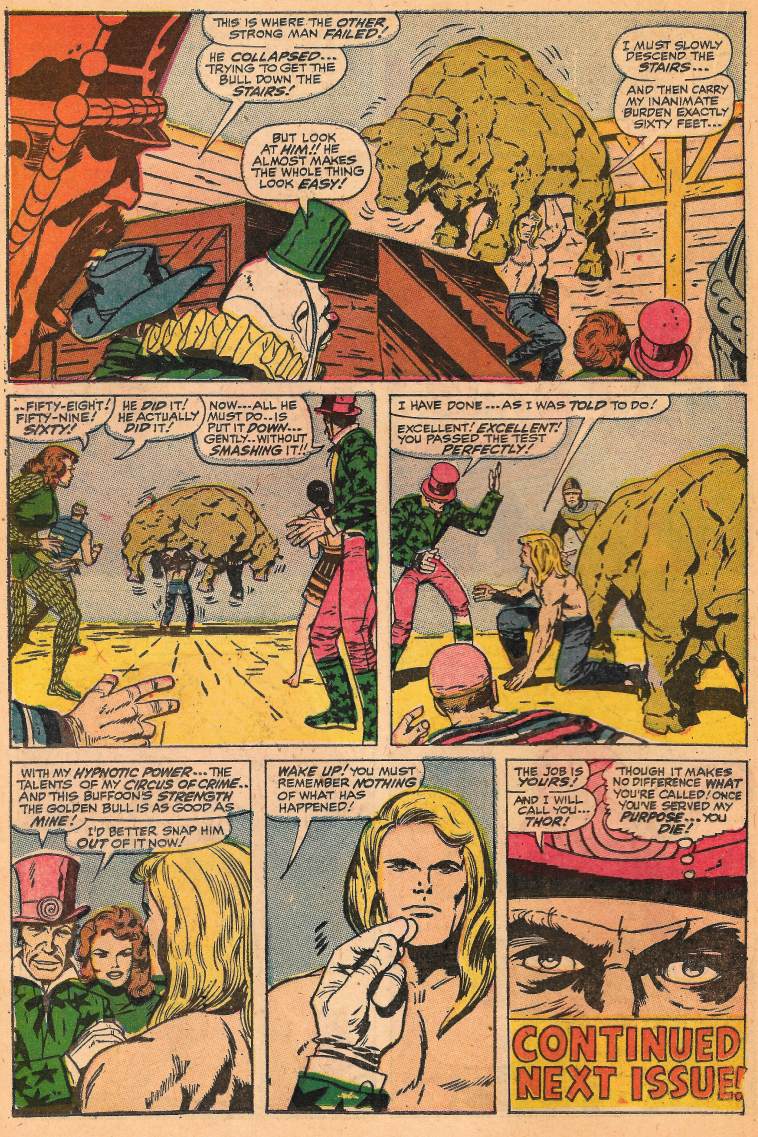 This issue is a classic, and I’m surprised at how much mileage Jack and Stan could get out third-rate villains who were one-and-done in the very Spider-Man comic they first appeared in. Yet given the right conditions and we find them menacing Thor.

In reviewing the issue, I noticed how much appreciation I have for Kirby’s four-panel pages. They are clear and vivid images conveying action in a way that I don’t recall seeing used much anymore. Kirby can throw out four pictures in sequence and you naturally fill in the gaps. Each picture matters. They are action poses but they don’t try conveying every single movement. It’s like Kirby knew how to make your imagination work for him.

Well, that ends the Crapbox’s brief tour of Thor’s world. Tune in on Monday when we start some our build up for the battle that DC movie audiences are clamoring for: Justice League vs Darkseid. We will see what the Crapbox has to say about both sides of that conflict.
Posted by SonOfCthulhu at 3:18 AM