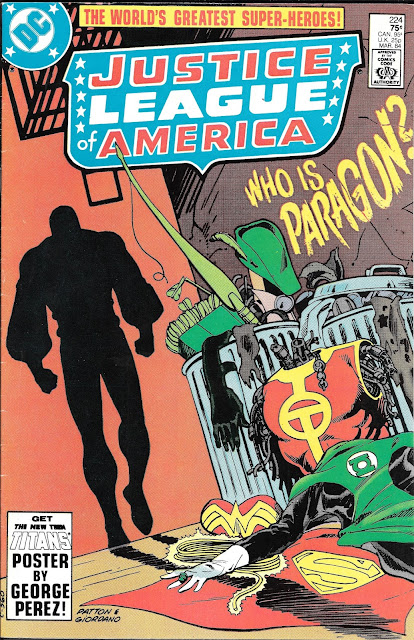 From that homage Spider-Man cover it looks like “Justice League, No More!” time

Thought we’d get back to the League beating up on villains instead of each other and found this gem in the middle of a run of multi-issue tales.

One difference between JLA and Avengers books was Marvel’s propensity to sell you not just one or two more books with a multi-issue stories, but to sell a story that incorporated a one page teaser at some point of an upcoming tale. That one page in an ongoing continuity served as a hook to get you to continue to buy a specific book. DC was much less serialized and much more “book” like in their storytelling style. I appreciate the positives of both types of storytelling, but always preferred Marvel’s more continuing storyline heavy style.

What can I say? I like being addicted to a comic series.

This tale was a one-and-done issue written by Kurt Busiek, whom I admire quite a bit for his storytelling aptitude. Here he makes good use of the league while introducing a villain that might be a bit overpowered, but a lot of fun to read.

You see, this villain is like a human version of Amazo.

And therein lies all you need to know. The League has fought Amazo a bunch by this point, so defeating the villain should be a snap. Yet, as it is far too often in these tales, it takes the heroes time to figure out exactly what it is they are fighting.

It might be because the guy interrupts them having lunch. 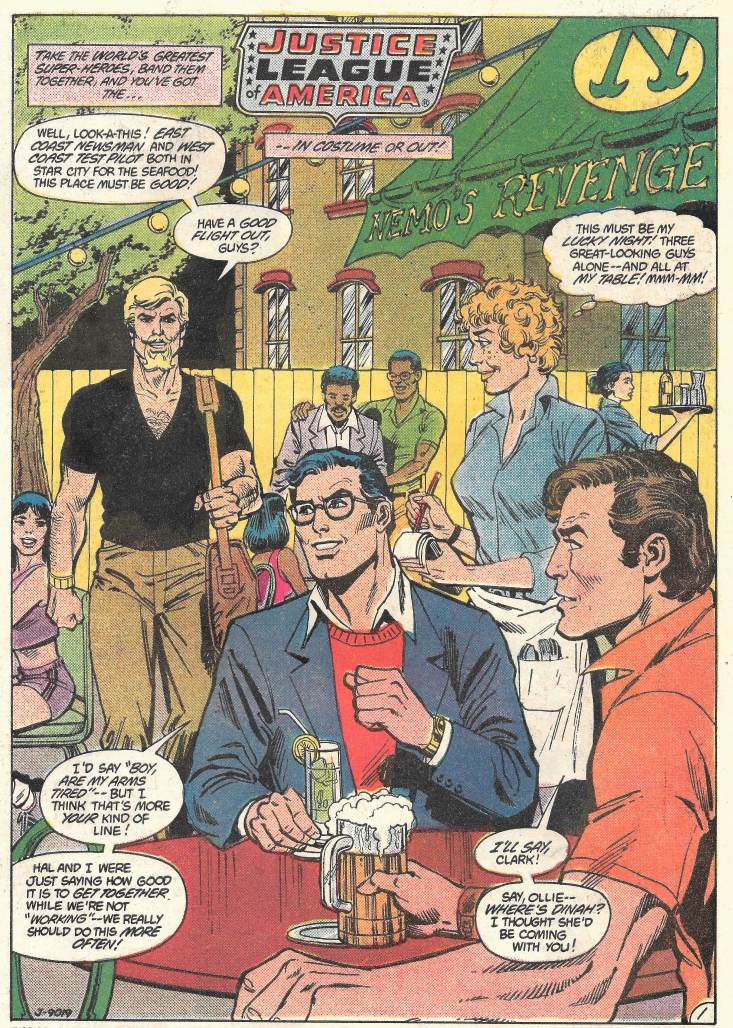 For the record, Dick Giordano does a marvelous job on Patton’s pencils here. Love the art through-out the book and this opening splash is no exception.

Here we have Oliver Queen (Green Arrow), Clark Kent (Supes, ‘natch) and Hal Jordan (Green Lantern). Hal asks where Diana Lance (Black Canary) is, since she and Ollie are usually show up as a couple. 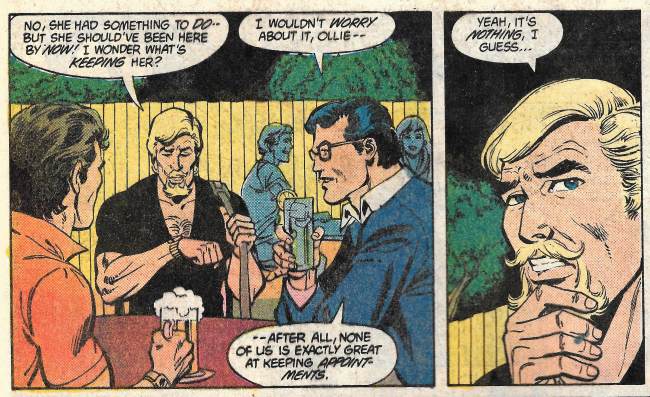 Ollie checks his watch and says it is no big deal.

Meanwhile, Black Canary finds herself in the middle of something that will turn into a big deal as she starts to thwart an attempted mugging…

…only to have the victim to take a hand in things…

…And thoroughly kick all their butts in a rather… lethal manner. Canary tries to intercede. 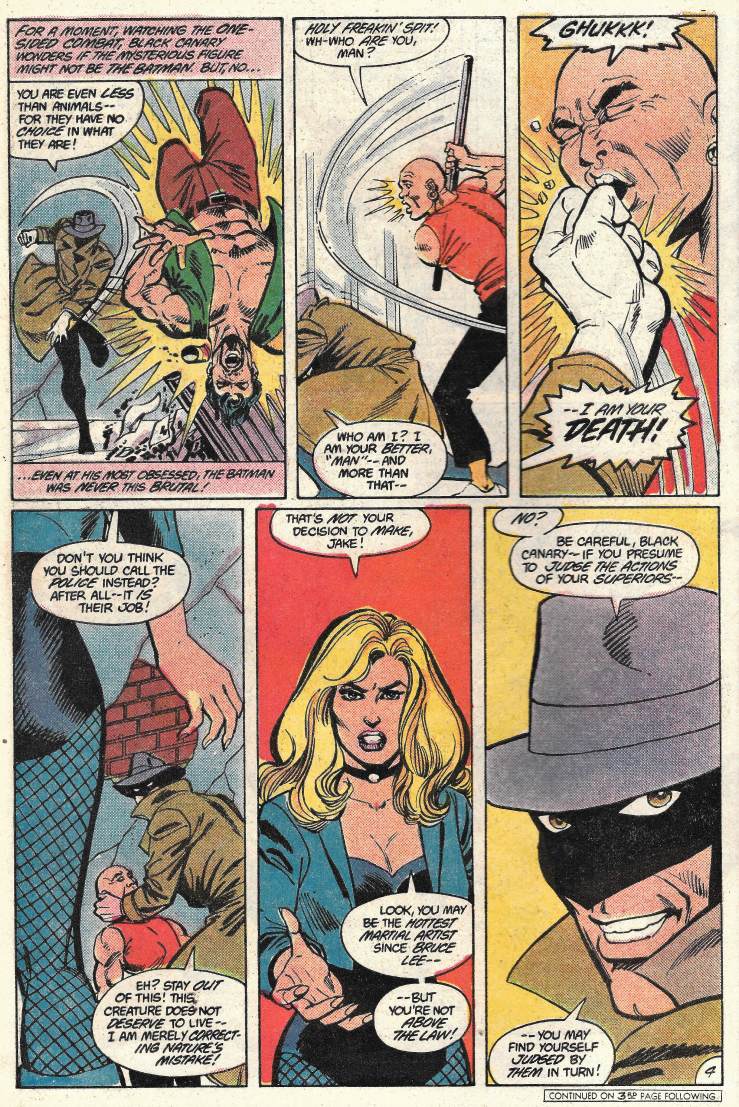 And she receive a chilling retort from the mysterious kung fu master. Feeling like she can take this bumb, Canary stands up to him. He quickly turns the tables on her, however. 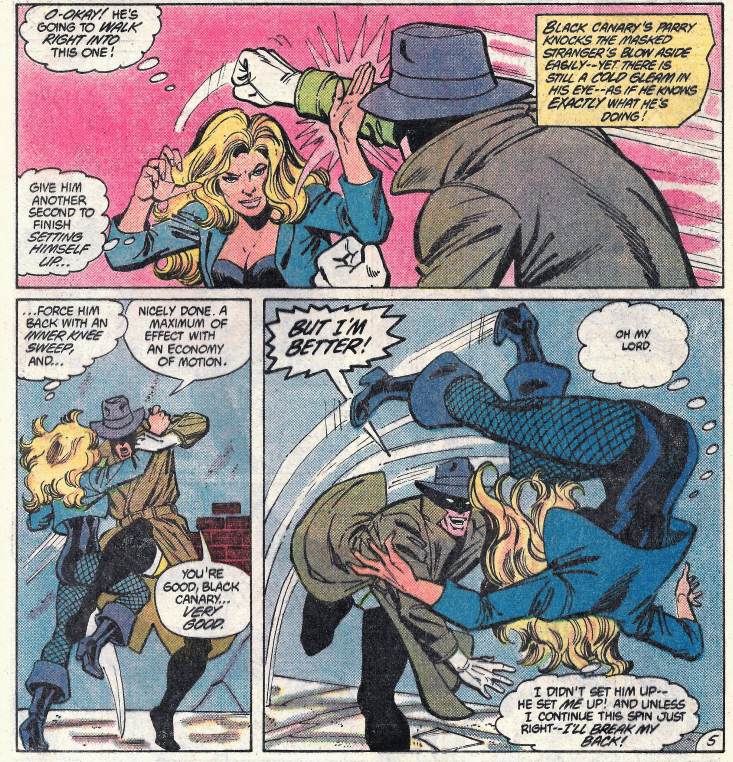 And since the guy doesn’t have any compunctions about killing, she unleashes her canary cry…and hides her surprise that he appears unaffected (although he does lose a rather nice hat). 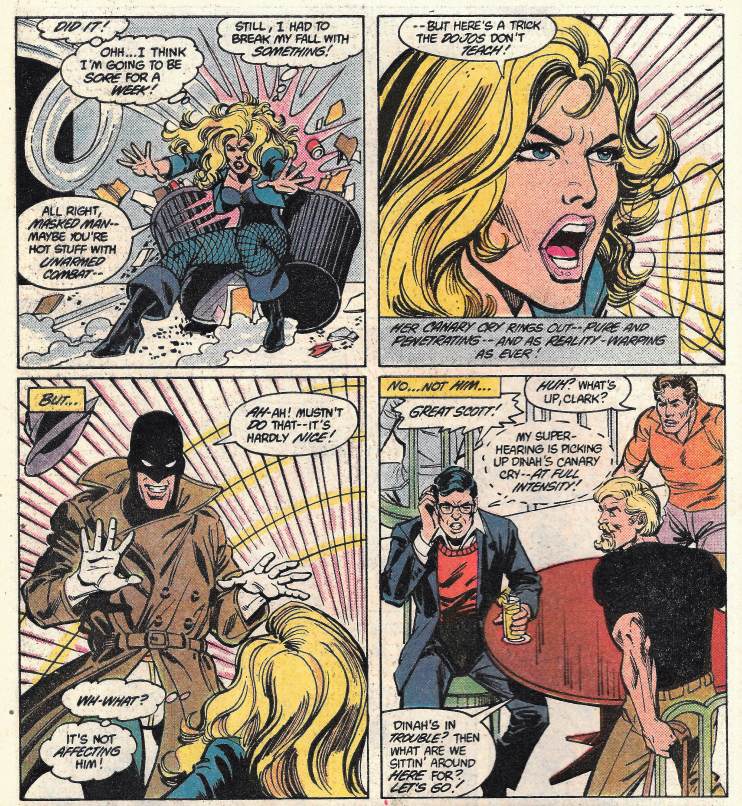 The brunch bunch hear her Canary cry and take off in a rush, while Dinah tries desperately to stay alive until they can reach her. 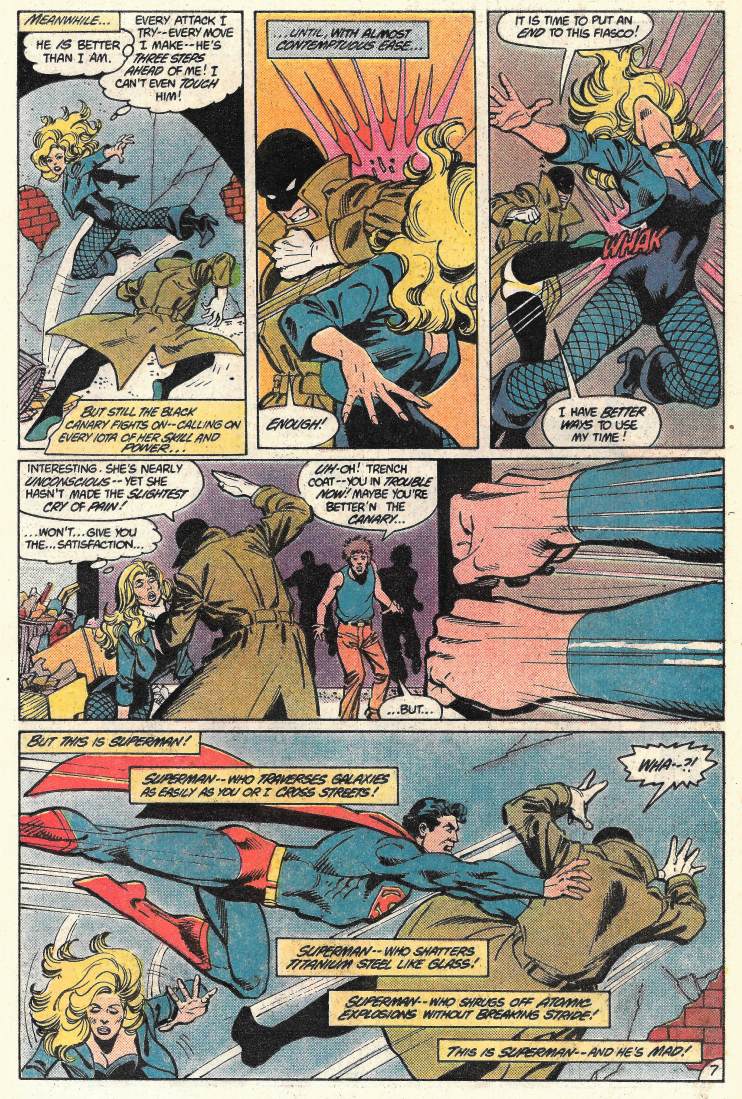 Lucky for her, one of those friends races speeding bullets. Superman has the perp in his grip… 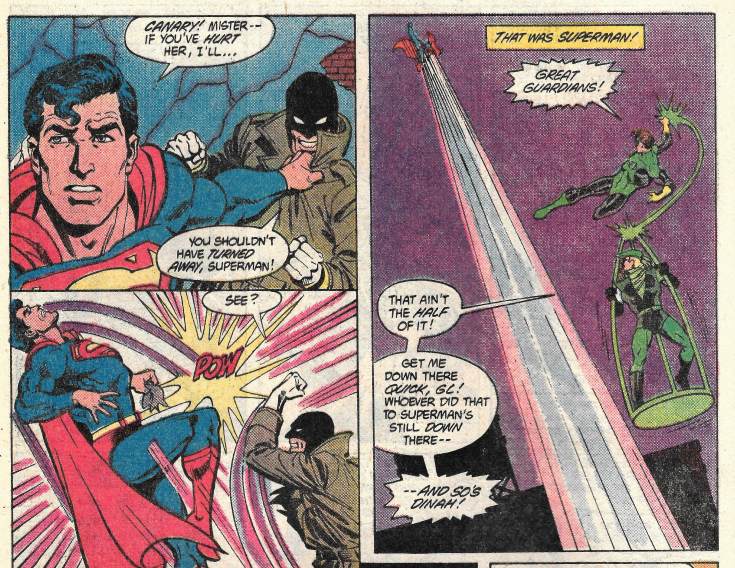 …But, shock of all SHOCKS! The guy punches Superman into the stratosphere! How?

The Leaguers have rescued Black Canary, but come up empty handed. Except for Clark, who snagged a pocket off his overcoat as he got struck. 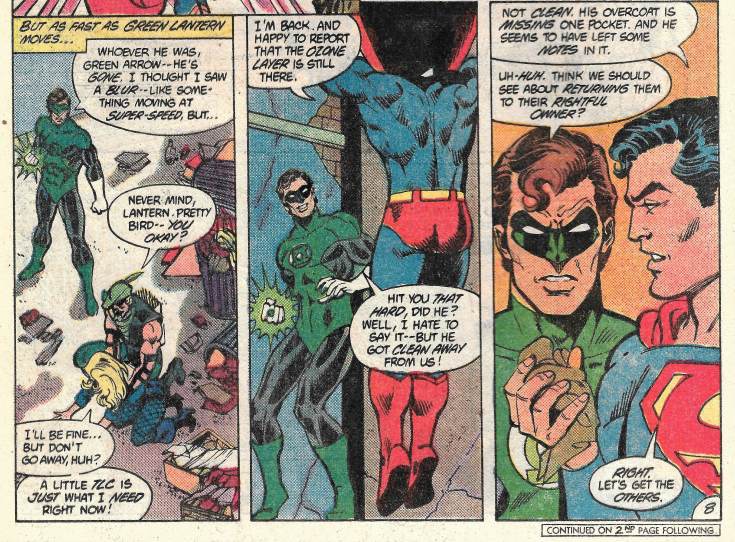 And come on! You have to kind of love that “I’m Back and happy to report that the ozone layer is still there.” line. Busiek can really write great dialogue. He makes Ollie sound concerned and Black Canary sound like the tough woman who loves him. He works well with giving the characters unique voices that differentiate them and tell a good story. It’s easy to see why his Astro City stuff is so popular.

The pocket contains some highly advanced chemical equations that even resident computer Red Tornado can’t decipher. Leave it to Firestorm’s Dr. Stein to come in handy. 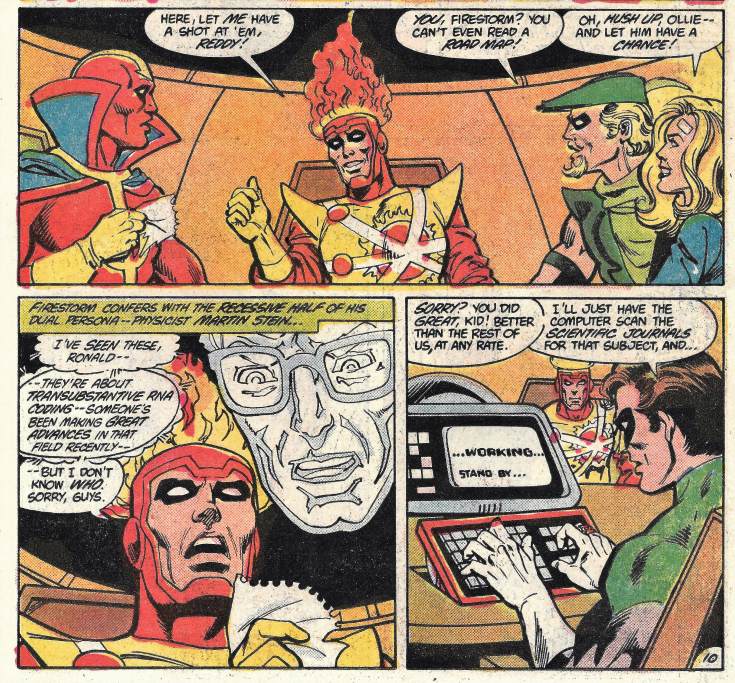 Lantern’s search brings up a Joel Cochin being the author of said note. Ollie is ready to jump up and put a boot in his butt over what he did to Canary, but Diana and Dinah both intervene. 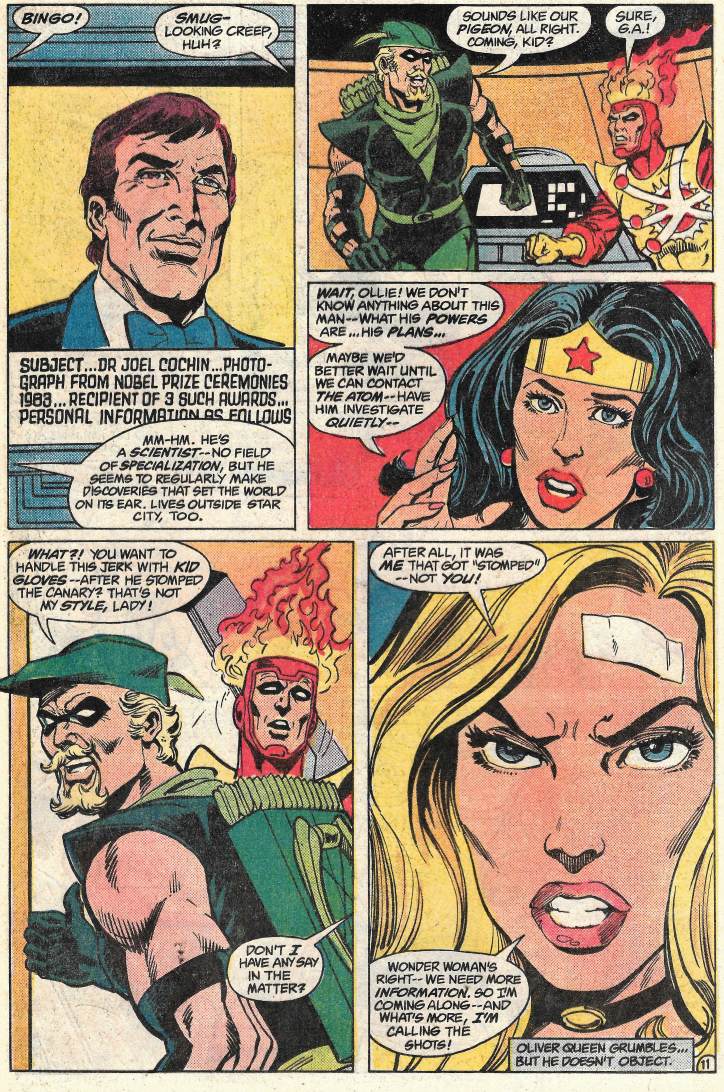 Great stuff here in both art and story and note that we aren’t in some pitched battle or even dealing with more than just some mug shots. Yet each picture tells a story about the character that jibs with the narrative. Great storytelling going on here.

So Firestorm, Canary and Arrow approach Dr. Cochin’s secret hidden lab. What do you think will happen? 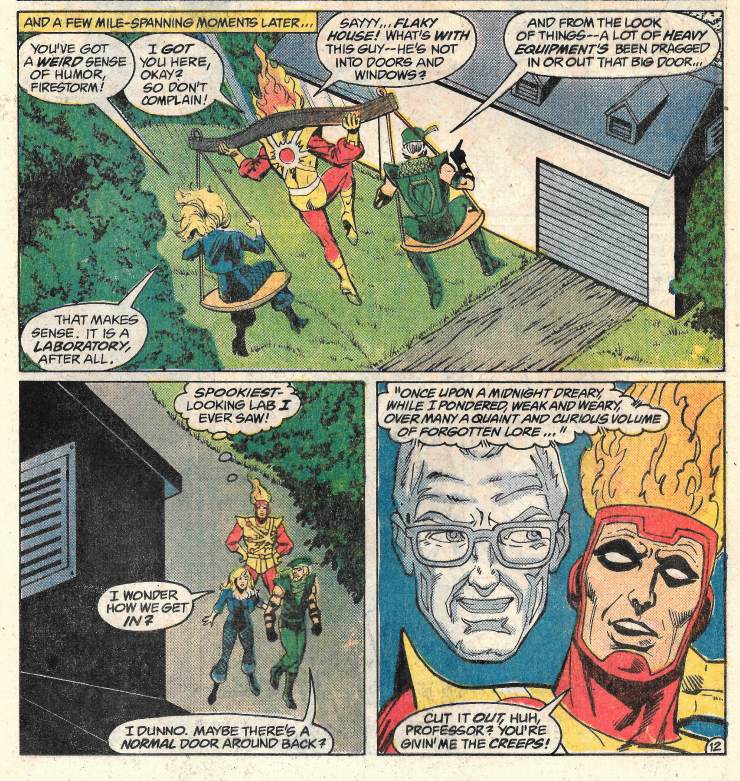 Whatever you’re thinking, I bet it wasn’t that Cochin would emerge by blasting a hole in his wall using something like Firestorm’s power, announcing he’s going by the handle Paragon, and stating “anything you can do, I can do better!” like a schoolyard taunt. 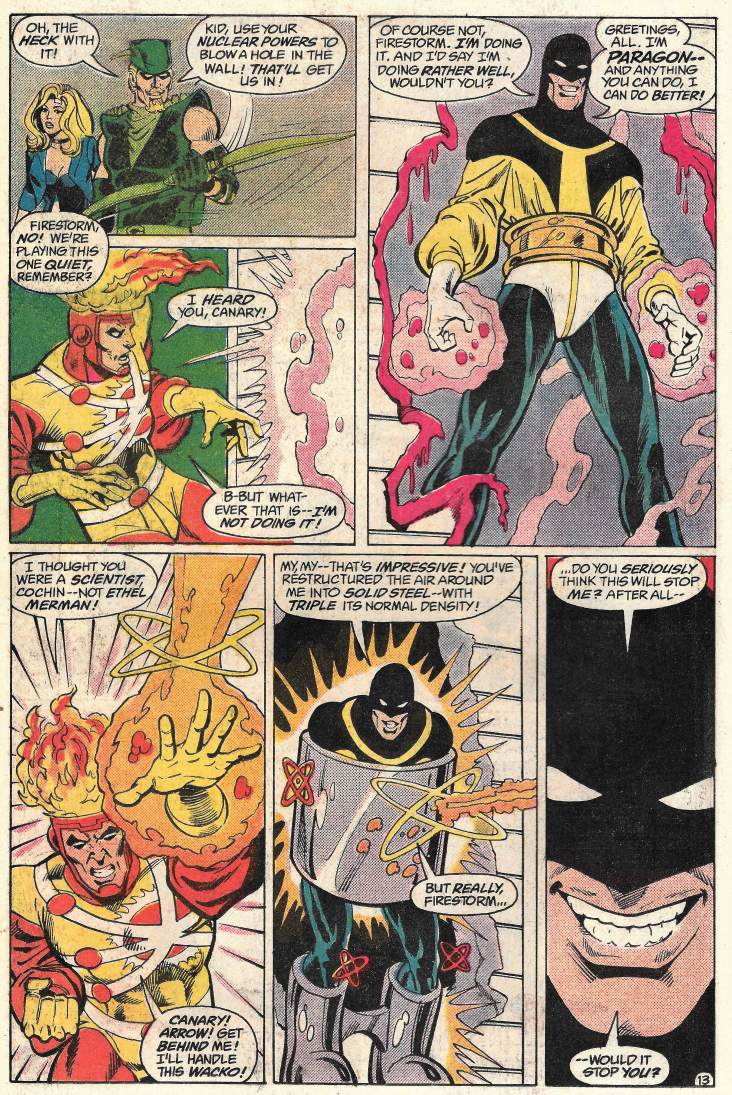 Now we’ve got a handle on Paragon’s powers: he can mimic the powers of anyone within range. Not only that, he can do so better than the person he is mimicking. 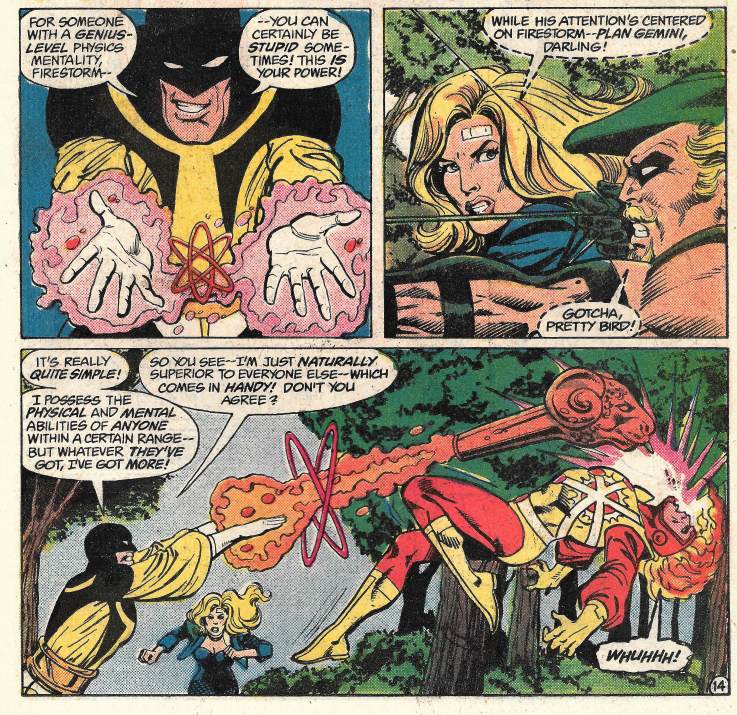 As he takes down Firestorm all I can think of is man this is going to be an impossible villain to defeat. 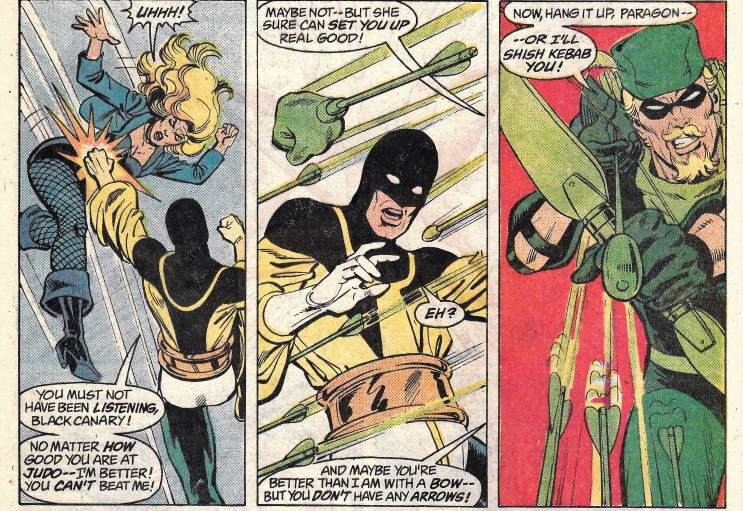 And that proves right as he next knocks out Canary (again!)… 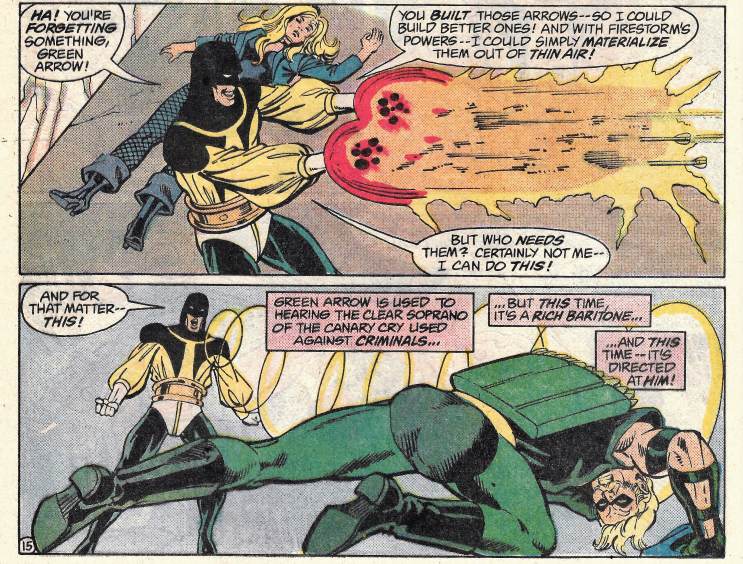 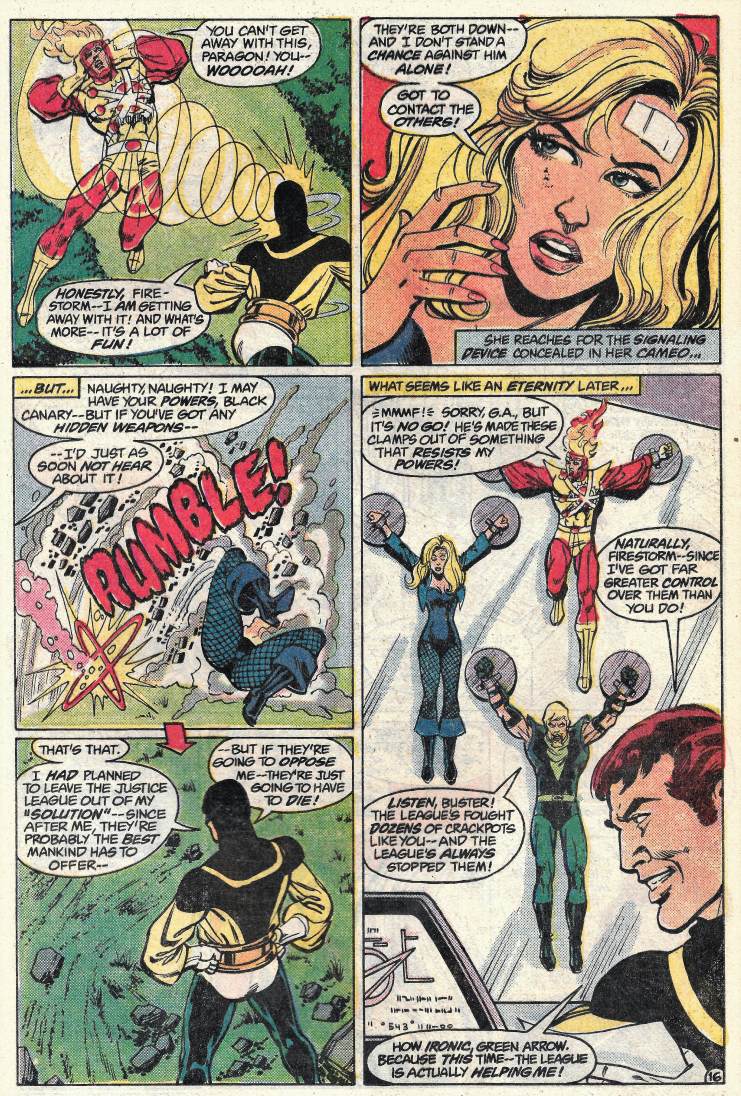 …and then on a resuscitated Firestorm. By the time he’s done, all three of them are trussed up like Thanksgiving turkeys.

And, he’s now moving along on improving his powers even more thanks to being able to use Firestorm’s powers. 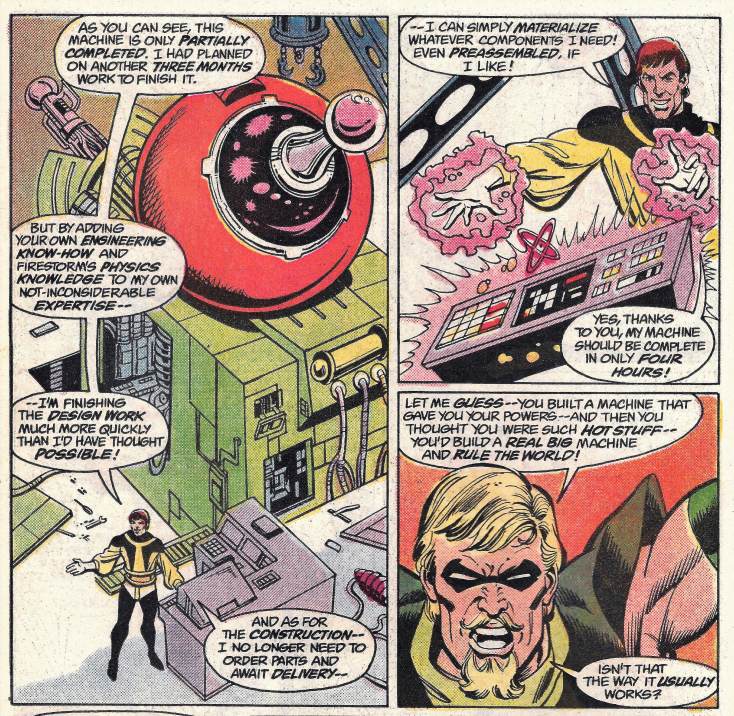 Would seem like the kid would separate into Ronnie and Doctor Stein and deny him that luxury. However, the worst part is listening to him prattle on about himself. 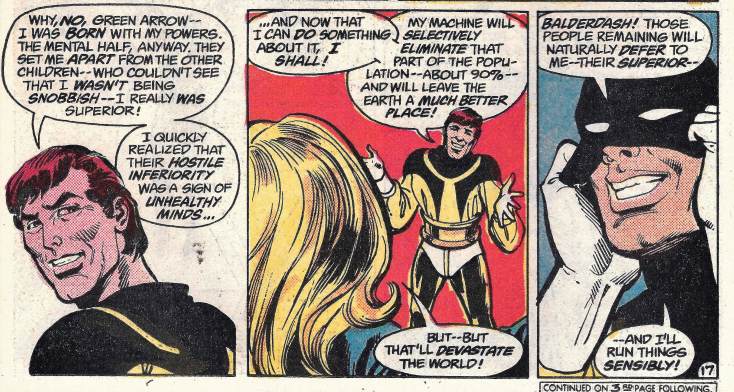 Paragon is THE MOST self-absorbed supervillain ever. He doesn’t even deny how great he is. Man, he’s asking to be taken down a peg.

Oh, and he’s also about to kill 90% of the world’s population. That’s also not so cool.

Sadly, things are about to get worse as the rest of the league shows up… 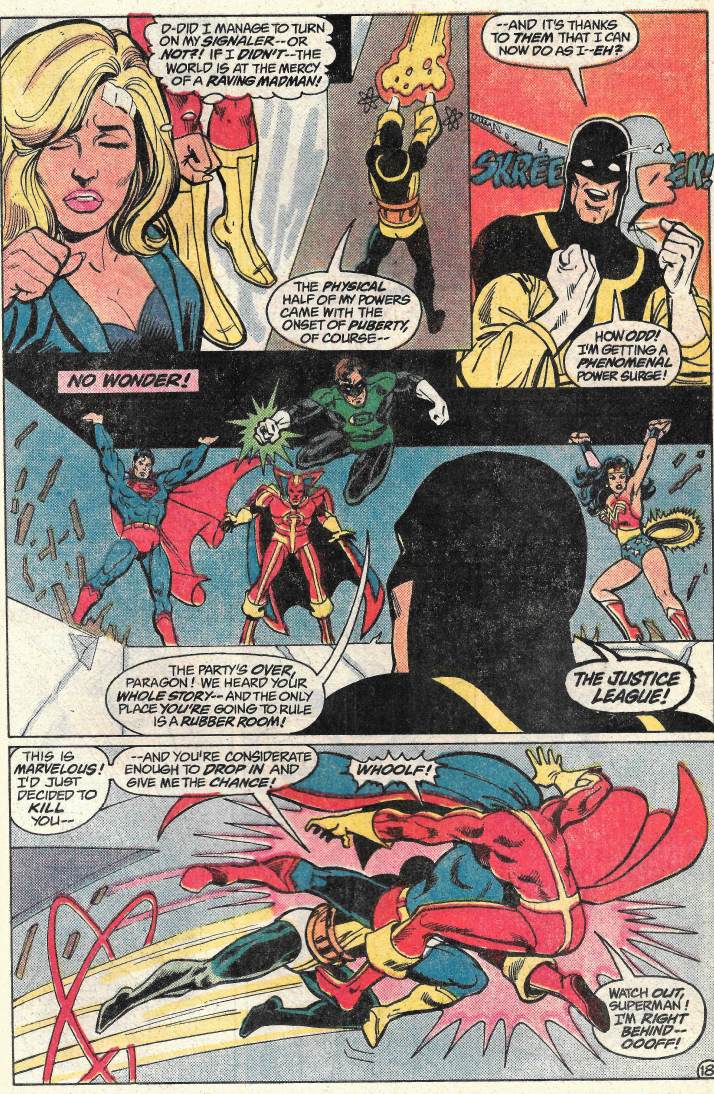 …meaning Paragon now has an upper level of power that is unfathomable.

He even beats GL by boosting his own strength beyond Superman’s and willpower so it is greater than Hal’s. This guy might be truly unstoppable. 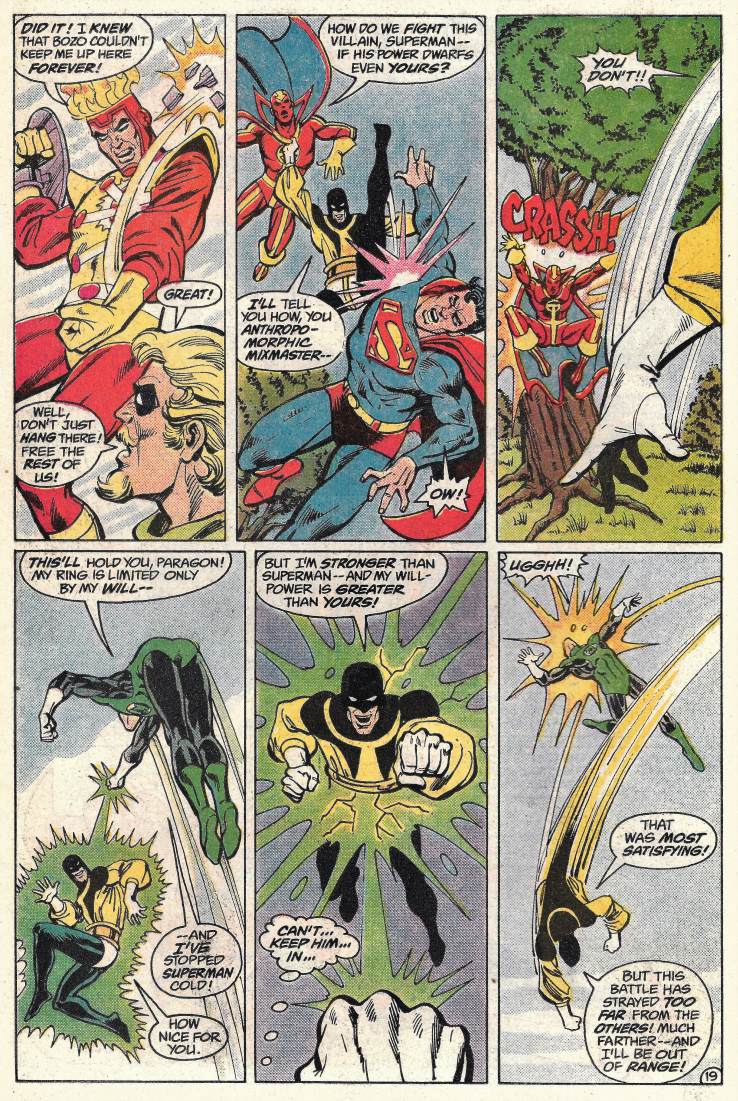 He takes out heroes left and right. It is a massacre! 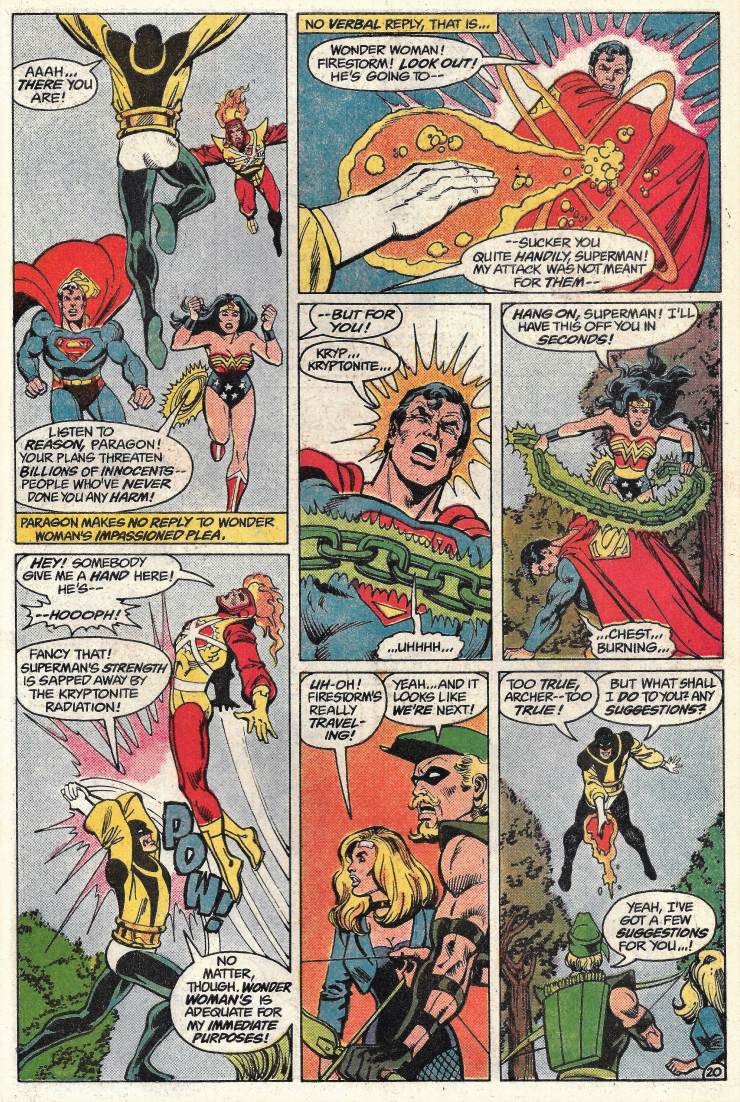 Until the Justice League starts using their heads. First Firestorm gets out of range of his powers… 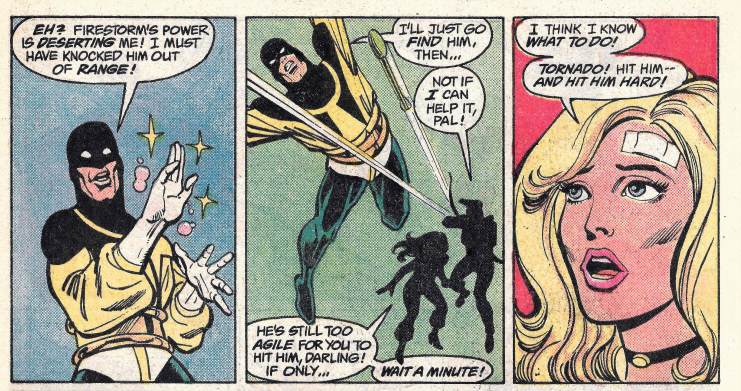 …then Reddy gives him a blast while Wonder Woman removes Superman from the playing field and out of his range.

And now it’s Reddy and GL who are taking him on, two leaguers without natural abilities. If only Booster Gold and Blue Beetle were here for this. 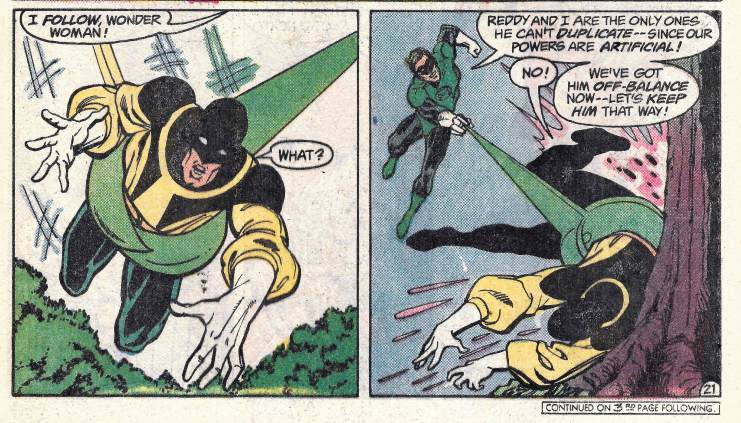 Lucky for us, there’s one more guy in the mix. Ollie hits him with a gas arrow and that’s all she wrote. Once he loses his concentration, his powers go bye-bye and Paragon gets the smackdown we’ve been waiting to see him receive. 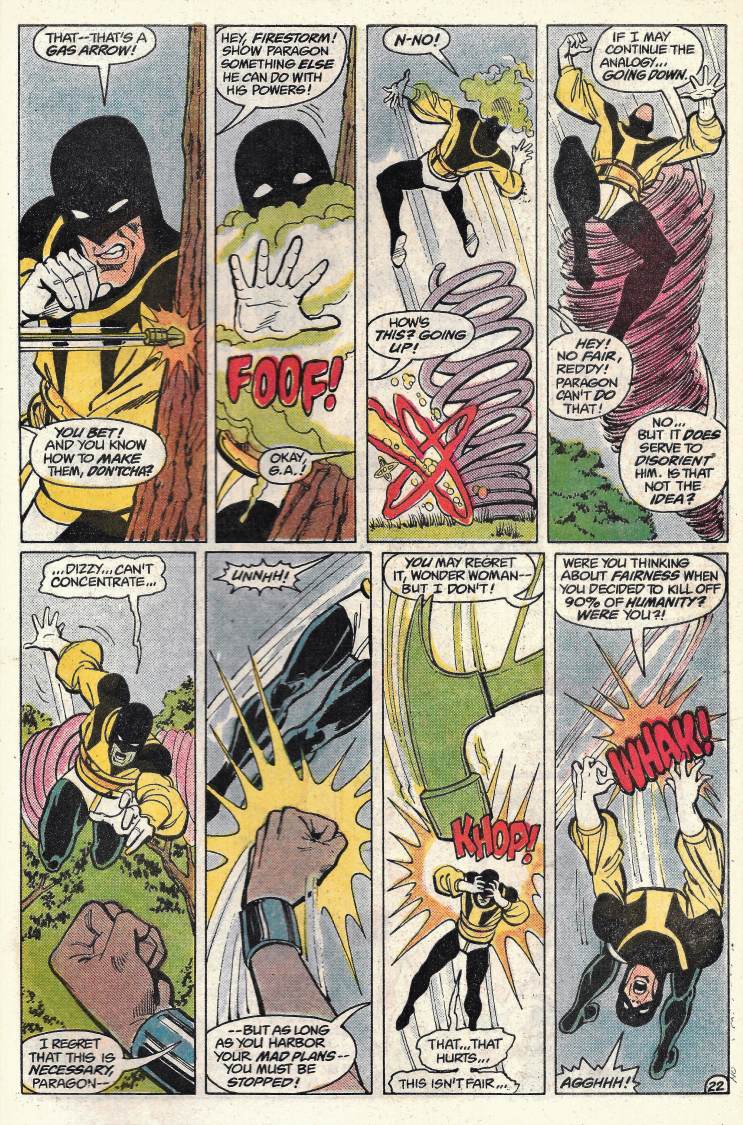 He lands appropriately at Canary’s feet and she strikes the knock-out blow. As Paragon sleeps off his battle wounds we have to ponder Firestorm’s words… 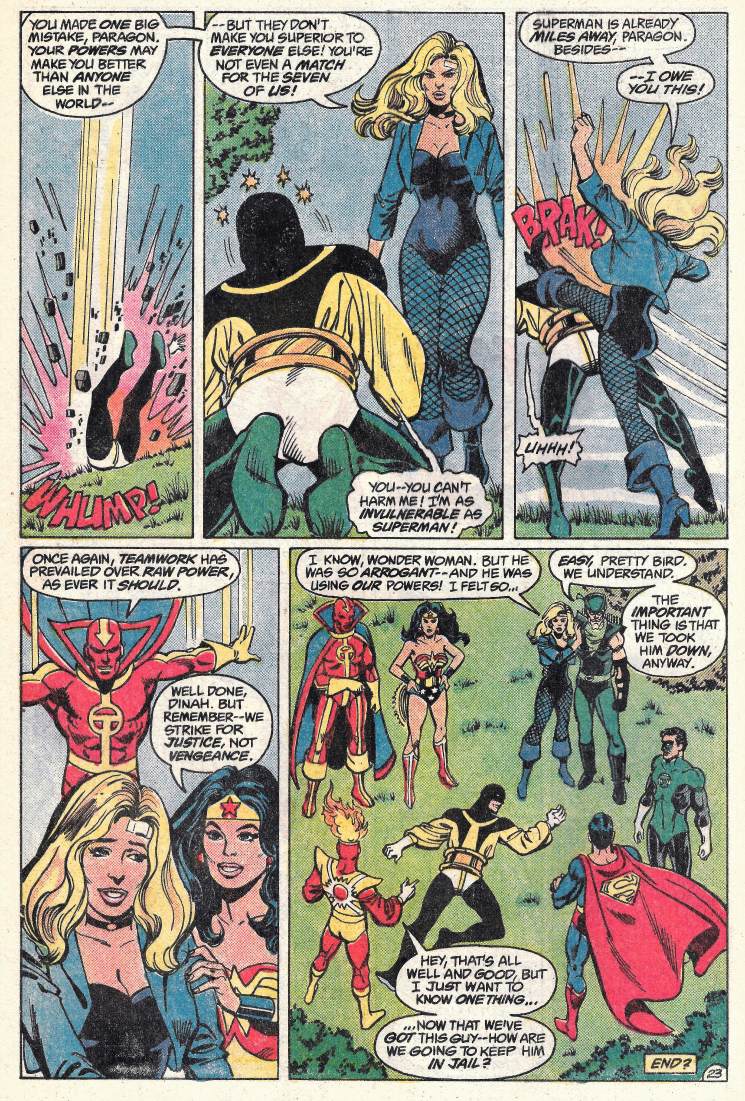 They must have found a spot because Paragon didn't show back up until Superman 675, after an almost two-decade absence. He had brief recurring appearances in that title but then vanished once again.

I loved this issue and it has quickly become one of my favorite Justice League tales. The art is clean and has a Mark Bright appeal to it, the villain is suitably menacing and formidable, yet his vulnerability understandable. The action is quick and has you on the edge of your seat through most panel progressions. The banter works and I loved how Busiek got the voices of the characters right. Just a great issue.

Chris did a write up of this issue too and even spoke to Kurt Busiek! Check his thoughts out HERE!
Posted by SonOfCthulhu at 2:55 AM