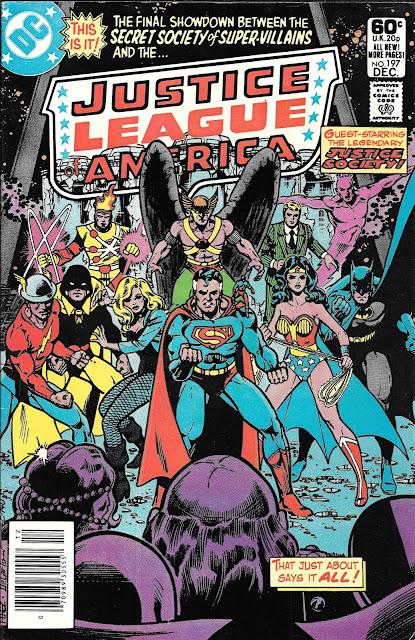 Will the heroes get to interact this issue? Only time will tell.

We begin with our Secret Society of Super-Villains looking mighty proud of themselves. 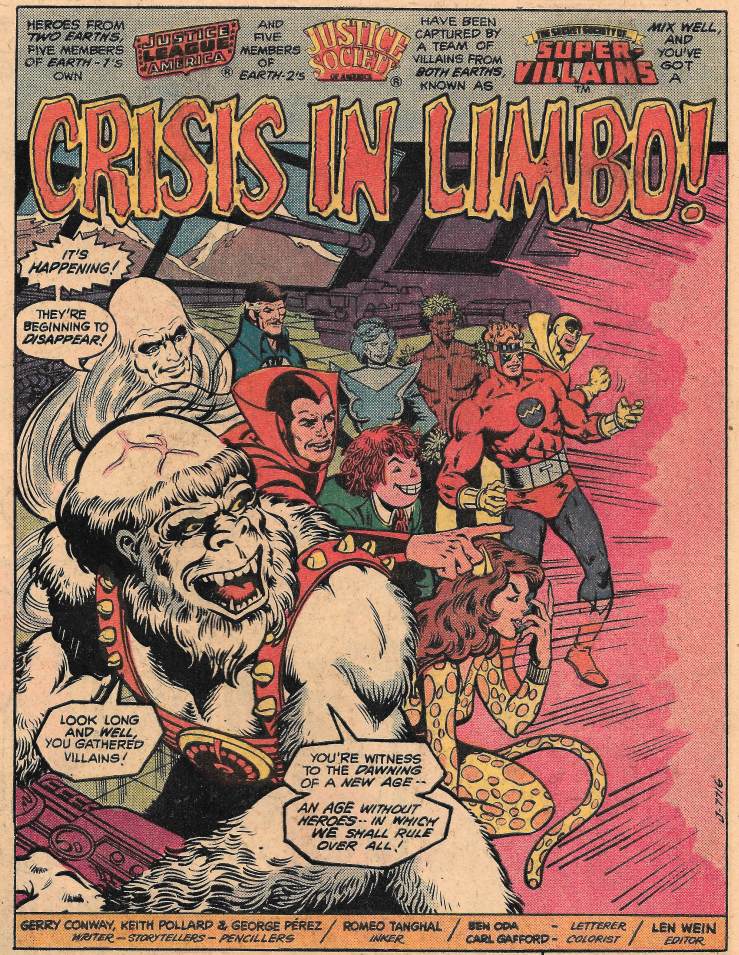 And why shouldn’t they? They’ve just captured 10 heroes from the Earth-1 and Earth-2 universes that insure that one group will never have to worry about interference again. All they have to do is engage this reject from a carnival ride and bingo... 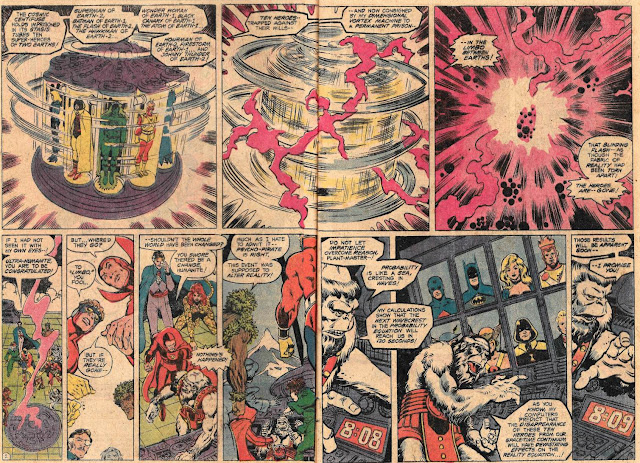 But the process takes a bit of time and Ultra-Humanite isn’t the most trustworthy of leaders, so everyone gets a bit antsy when there isn’t immediate gratification. But he spins a good excuse and seconds later… 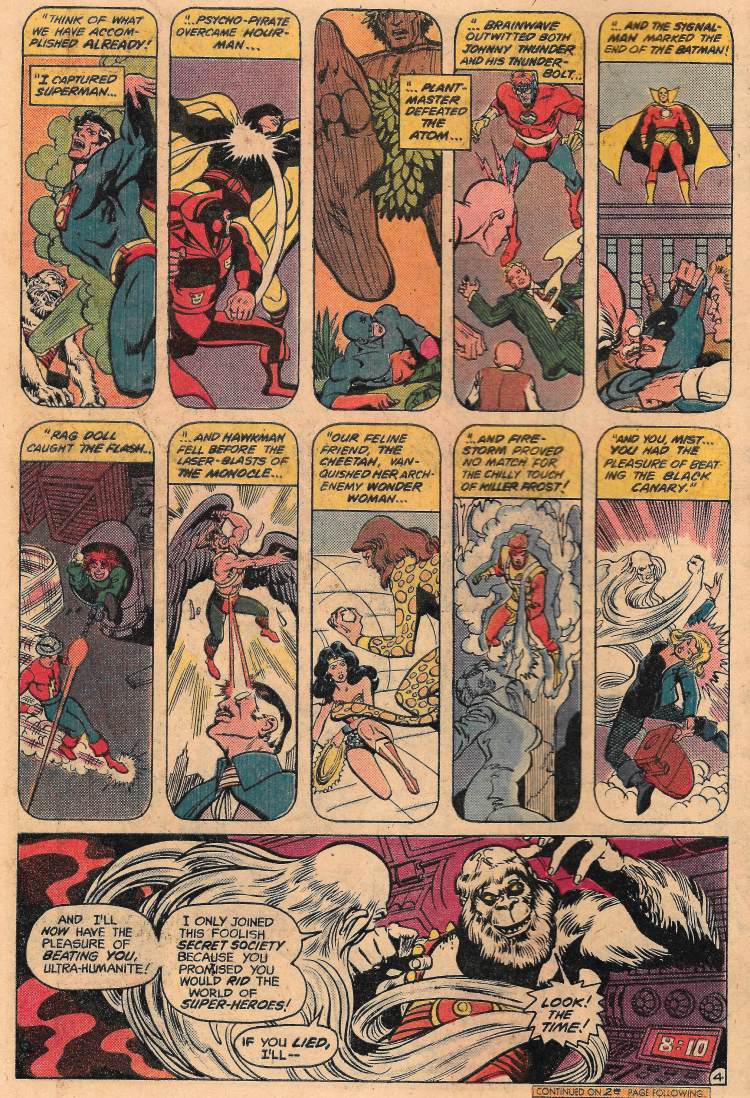 …as we replay the incidents in the last two issues that led up to this historic moment, a change occurs... 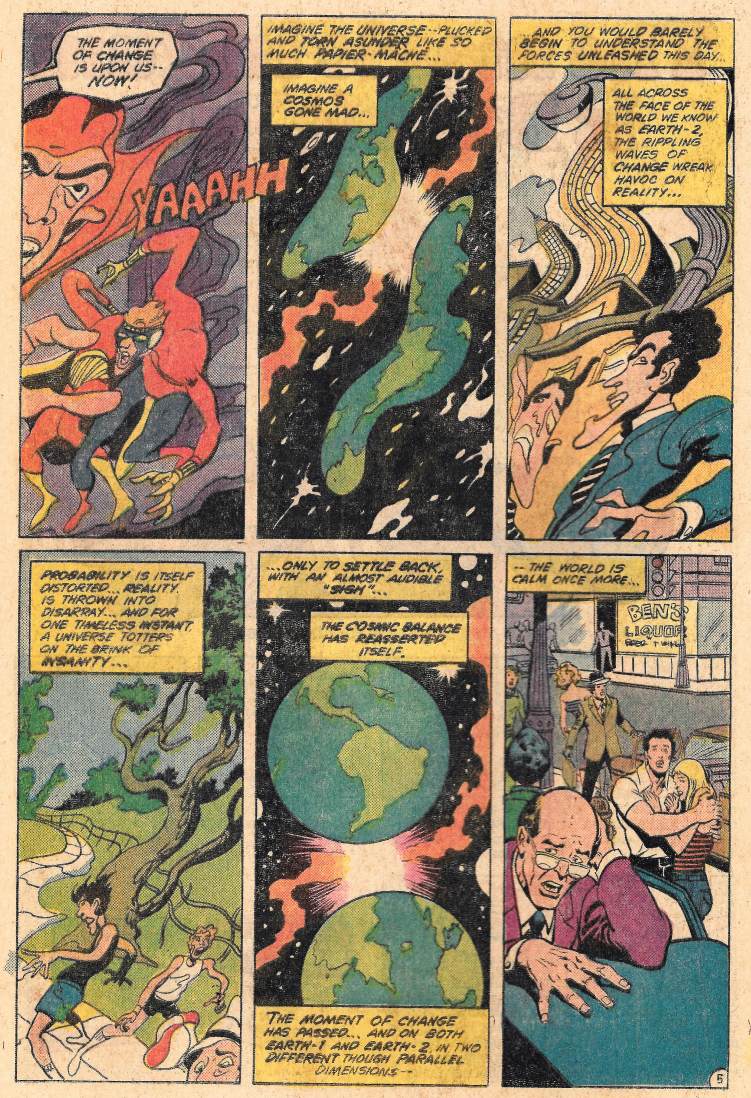 …It actually happens! Everyone on both Earths has a simultaneous acid flashback ending with… 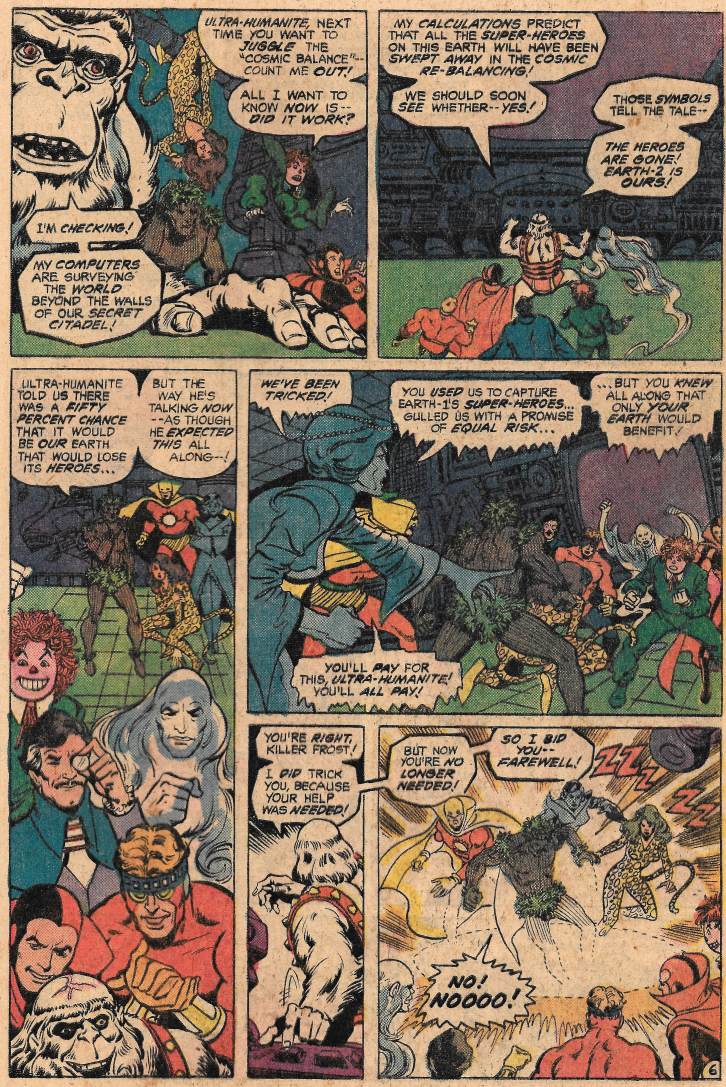 …all the heroes from Earth-2 disappearing. Ultra-Humanite tries the “well, them’s the breaks” approach with his comrades from Earth-1, but when that doesn’t work, he just banishes them back to a hero-filled Earth-1.

It has to be noted here that the villains DID manage to send their most hated arch-enemies into Limbo, never to return. You’d think that’d be enough for most people.

But no. Not for Killer Frost it isn’t. 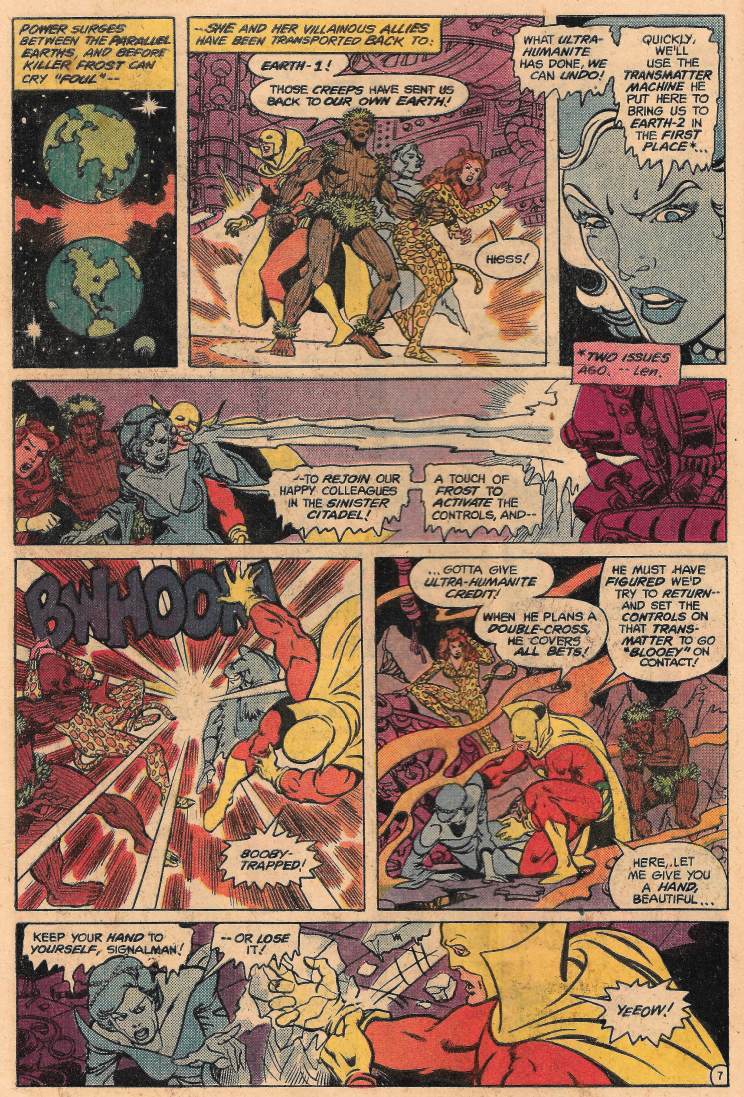 Hell hath no fury like an ice princess scorned...remember how pissed off that Elsa chick got in Frozen?…and scorned a second time as she tries to teleport back to Earth-2 and the transmatter machine explodes from Ultra-Humanite’s booby trapping. 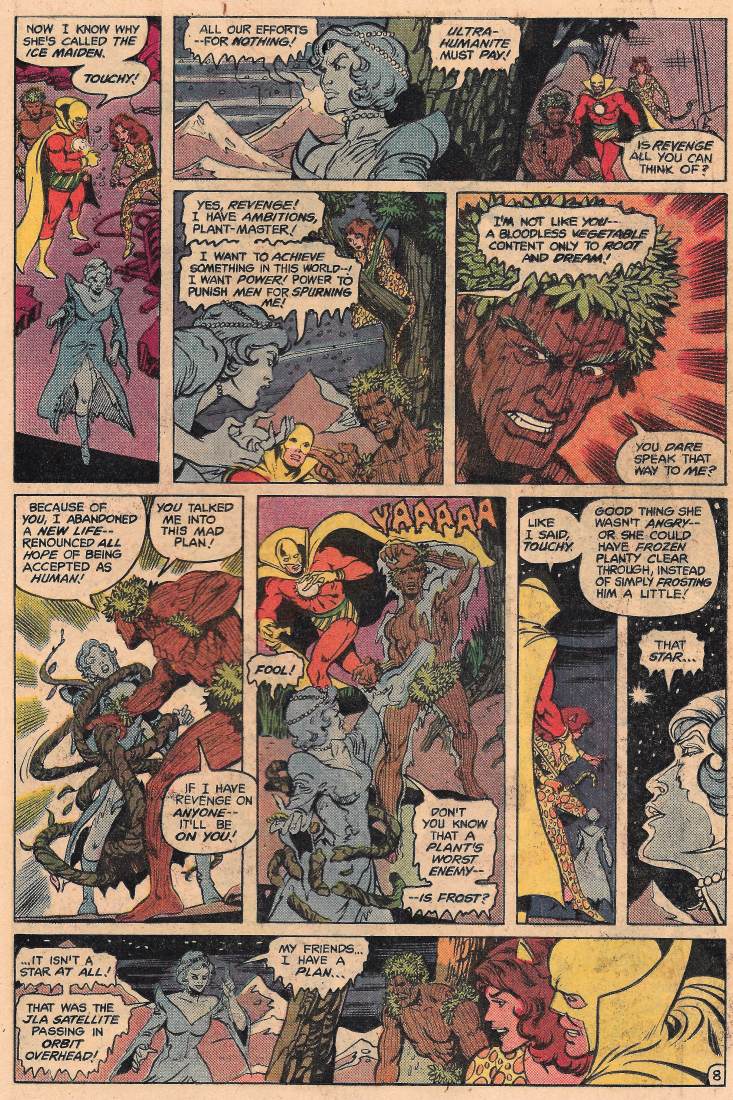 Nope. She wants revenge, and as soon as she mentions the JLA satellite being overhead, I think she’s going to call in the reserve members from Earth-1 to take out the Society.

I couldn’t be more wrong if I tried.

Her plan is simple…

If by simple you mean exceedingly convoluted. First we have Cheetah attack Green Lantern when he responds to a phony code-one signal initiated by none other than SIGNALMAN. Hey kids, it’s an actual superpower. Somehow. 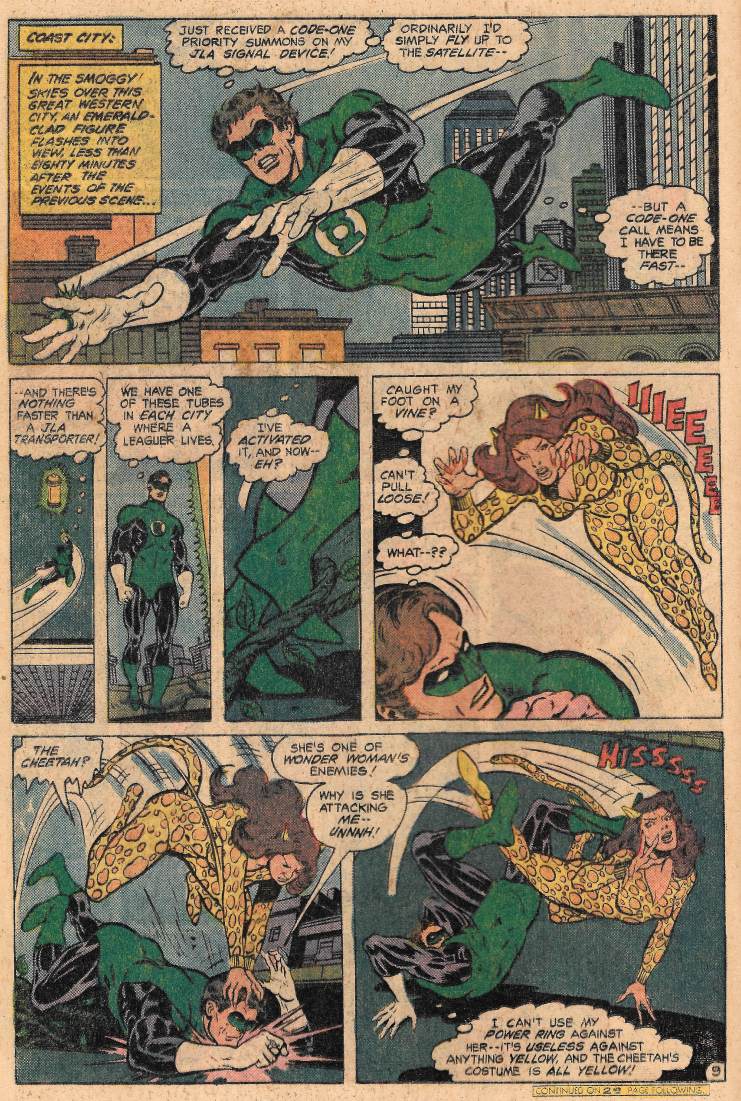 Anyway, while taking her down with his bare hands because his ring won’t work on her yellow costume (god, how I loved the old GL weakness)… 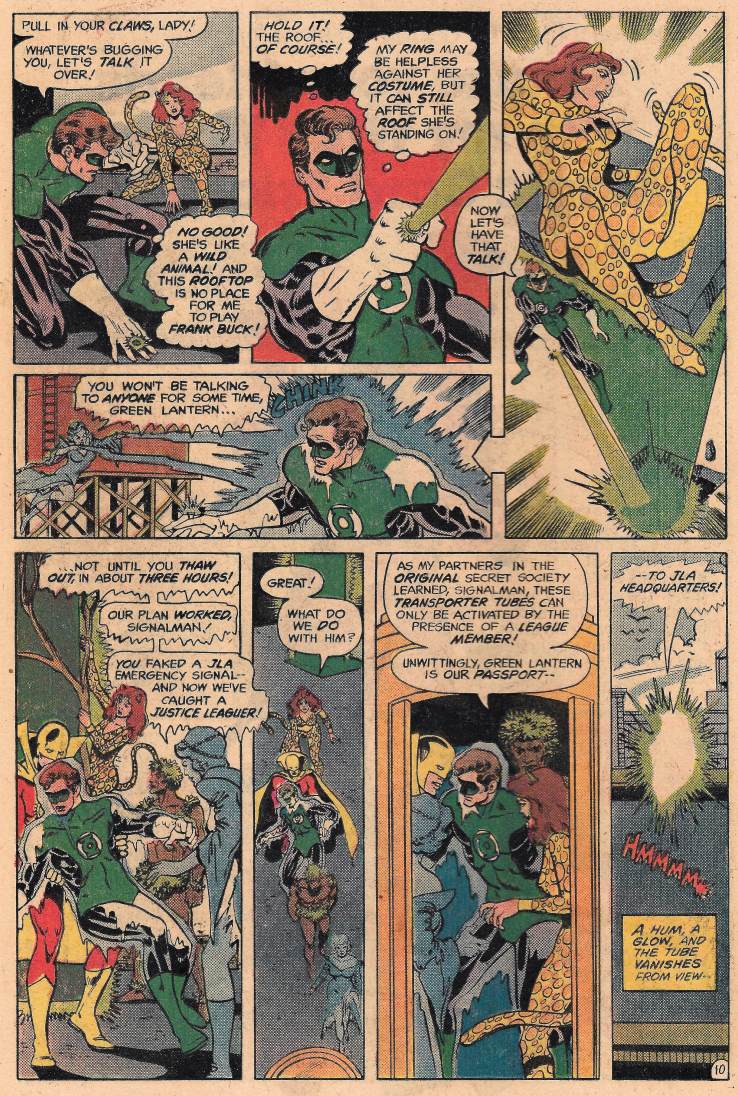 …he ends up distracted enough for Frost to turn him into a lime-colored popsicle and use his JLA status to access the satellite teleporter.

Once on the station, they face off against Ralph Dibney, the Elongated Man and second greatest detective in the DC universe. SIGNALMAN again uses his awesome signal-making powers to flash fry Ralph’s mind for a long enough for them to make it to the JLA’s Earth-2 Interdimensional Transmatter Machine and teleport over to… 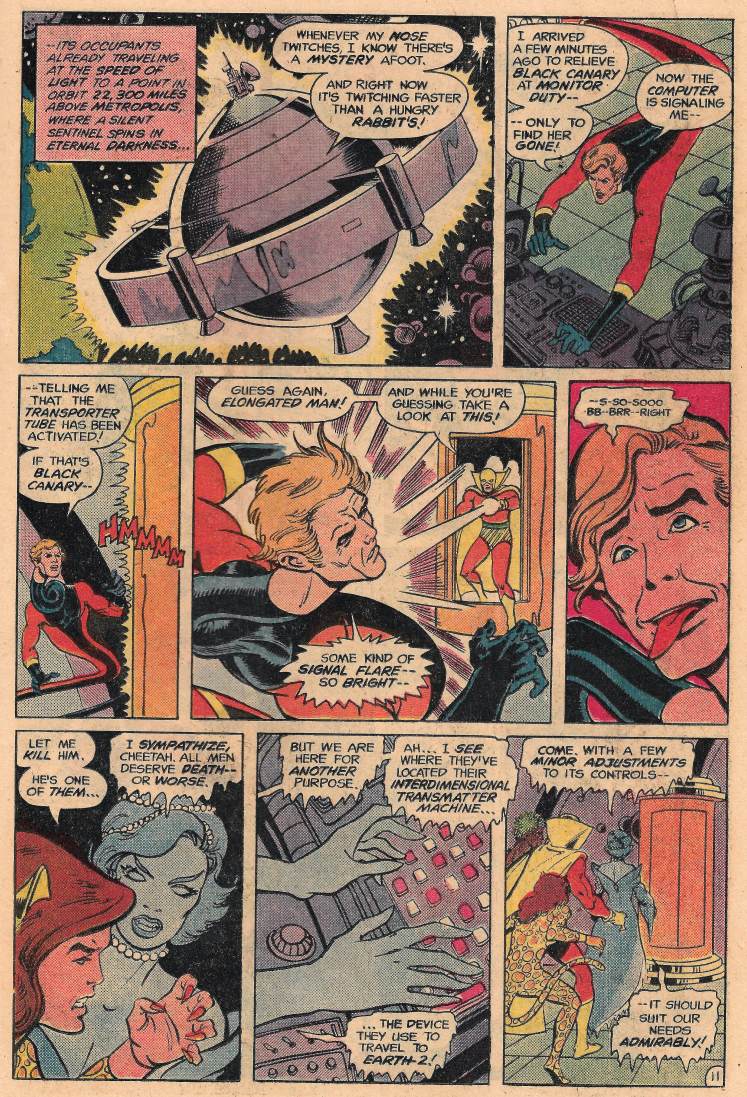 …you think I’m going to say Earth-2, don’t you. Because I thought upon seeing all this it would be Earth-2. But surprise, they teleport to…

Not gonna tell ya just yet. First, we get to watch Monocle and Rag Doll take out an entire police station. Note the bold large placards placing us firmly on Earth-2 in this and… 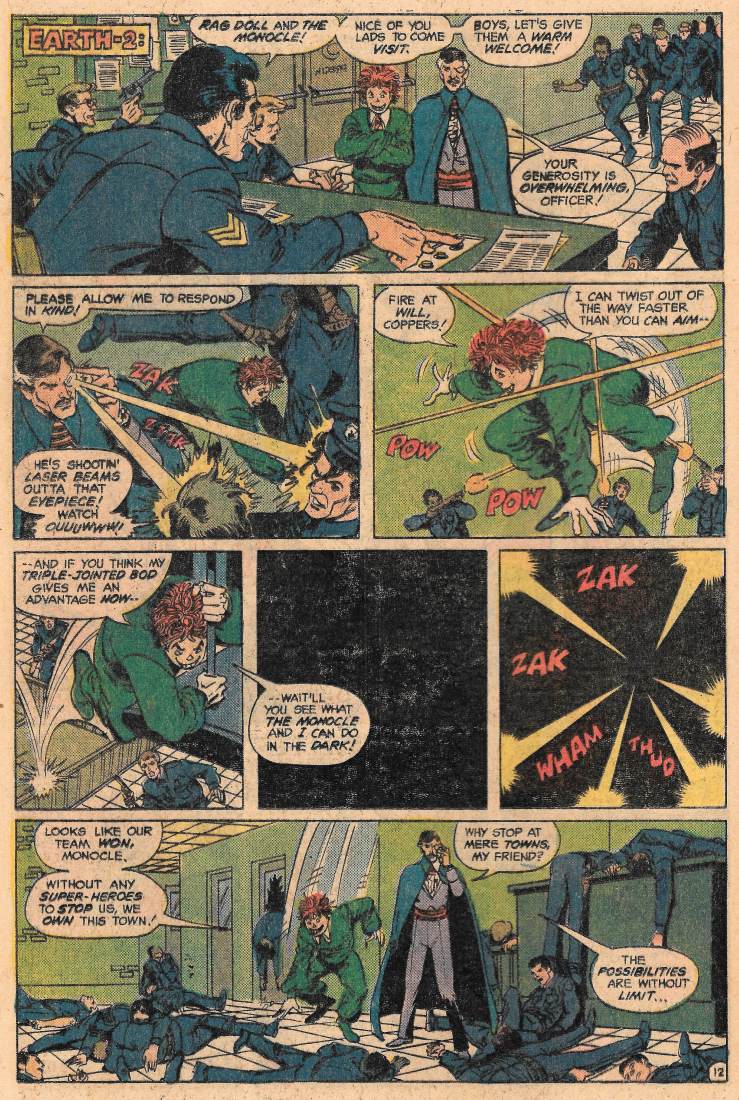 …the next two pages. It’s as if they want to make sure we know we’re on the world without heroes, even though that is the topic of the villain’s conversations anyway. Here we have the Mist and Psycho Pirate pocketing loot. 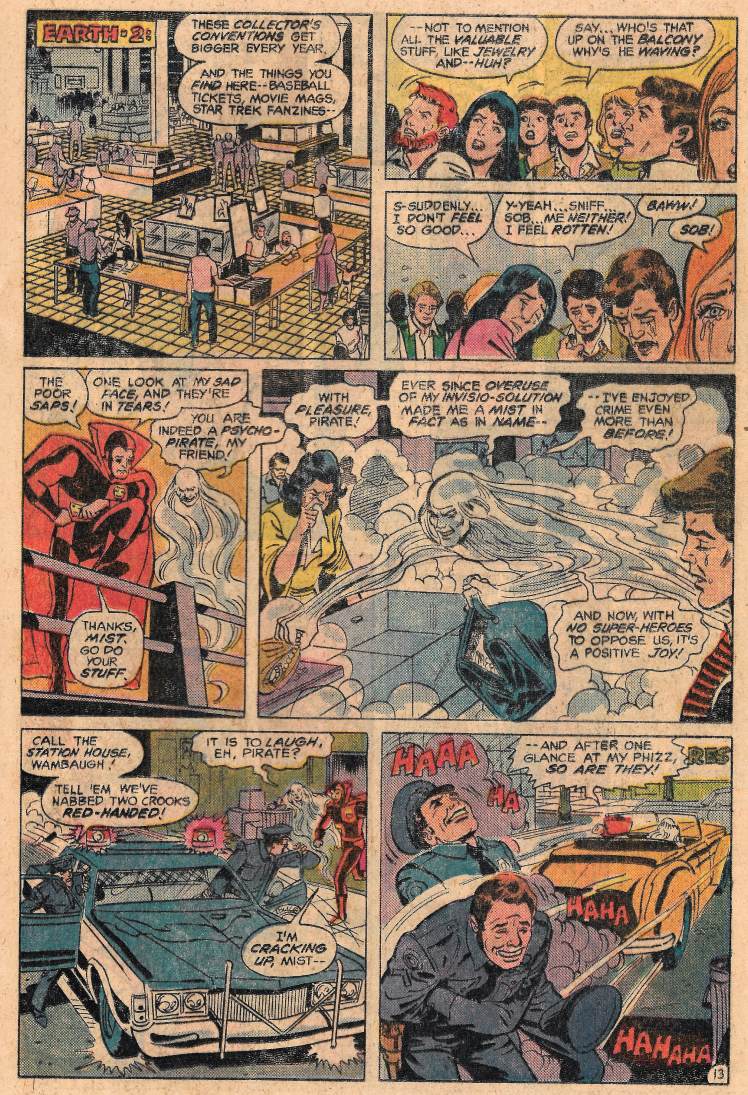 And Brainwave becoming a sexual predator. 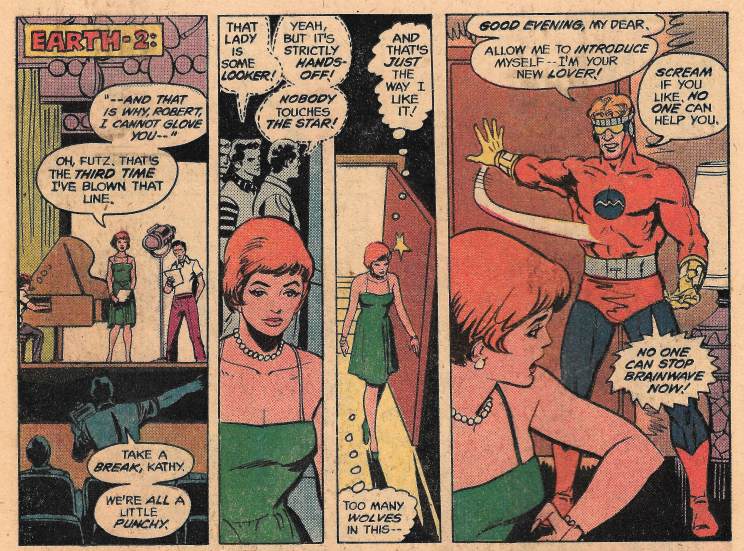 And the Ultra-Humanite doing whatever the hell it is he is doing to these UN delegates. 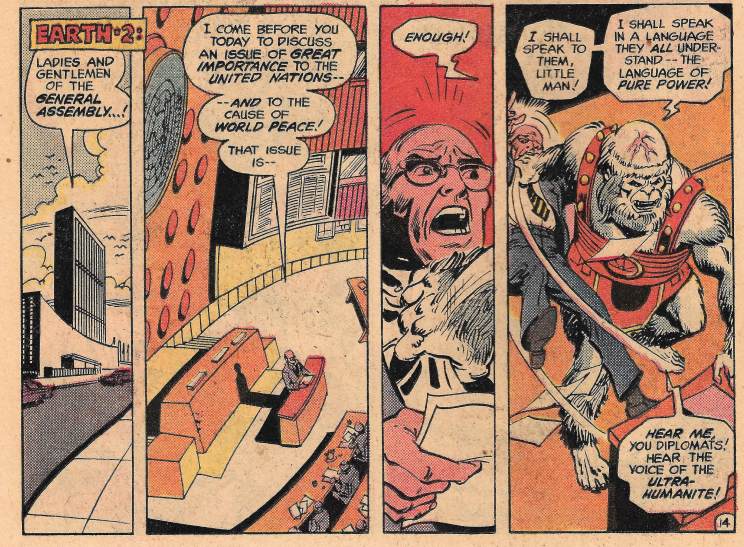 I mean I don’t understand why a hyper-smart being would care about the UN, which acts mostly as a peacekeeping organization and not an actual seat of any real military or political power. They can shame and plead cases, but making the delegate all float around like they’ve imbibed fizzy lifting drinks is not going to make you the leader of the world.

But whatever. And we finally learn where the Earth-1 members made off to: LIMBO. Yes, you heard that right. The villains are going to rescue the heroes. 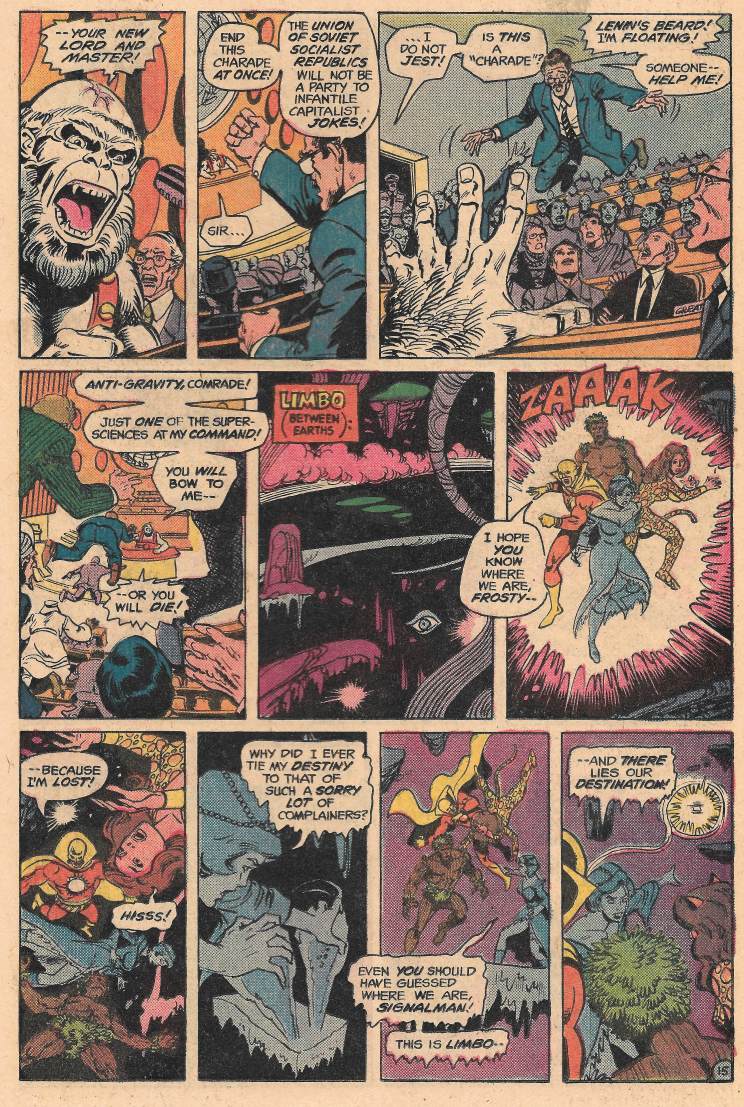 Once they can get it to stop spinning. Sadly, that’s easier said than done. Limbo doesn’t appear to follow our normal rules of physics and none of them have the raw power to make it stop. 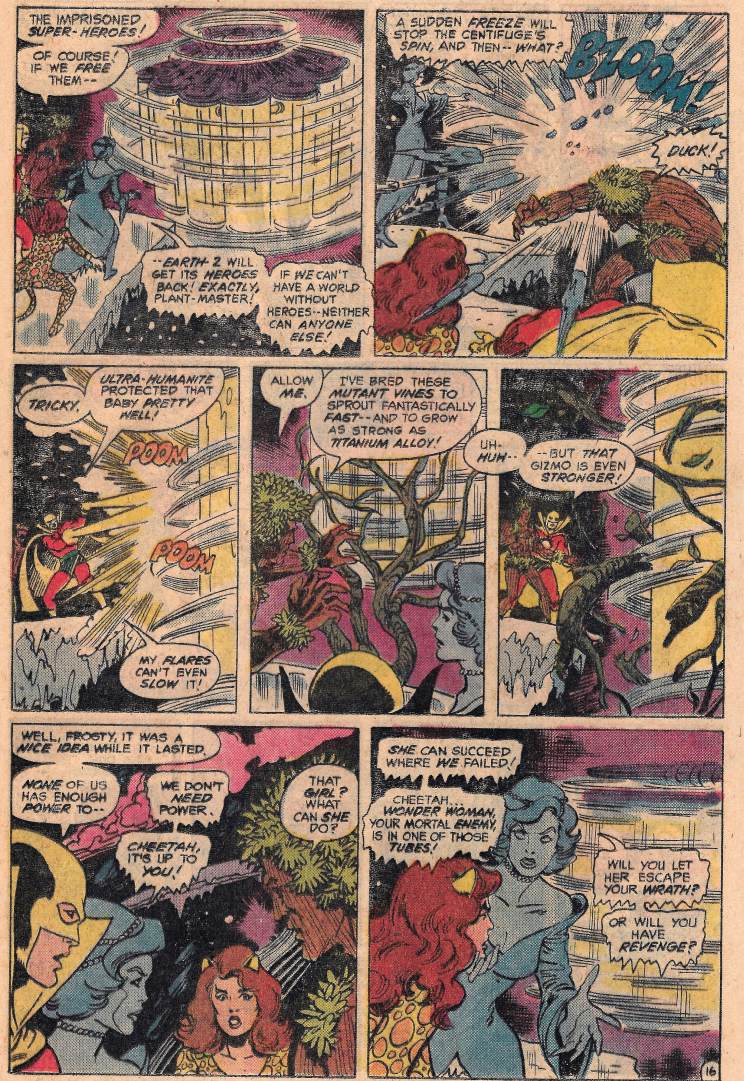 At least it seems that way until Killer Frost convinces Cheetah that she has to kill her enemy Wonder Woman and then that lady cat does the impossible. I’m used to seeing Cheetah in her current incarnation, as a woman altered by the gods to fight against Wonder Woman. Here she’s billed as a normal strength fighter with lots of training, yet she succeeds where everyone else fails. 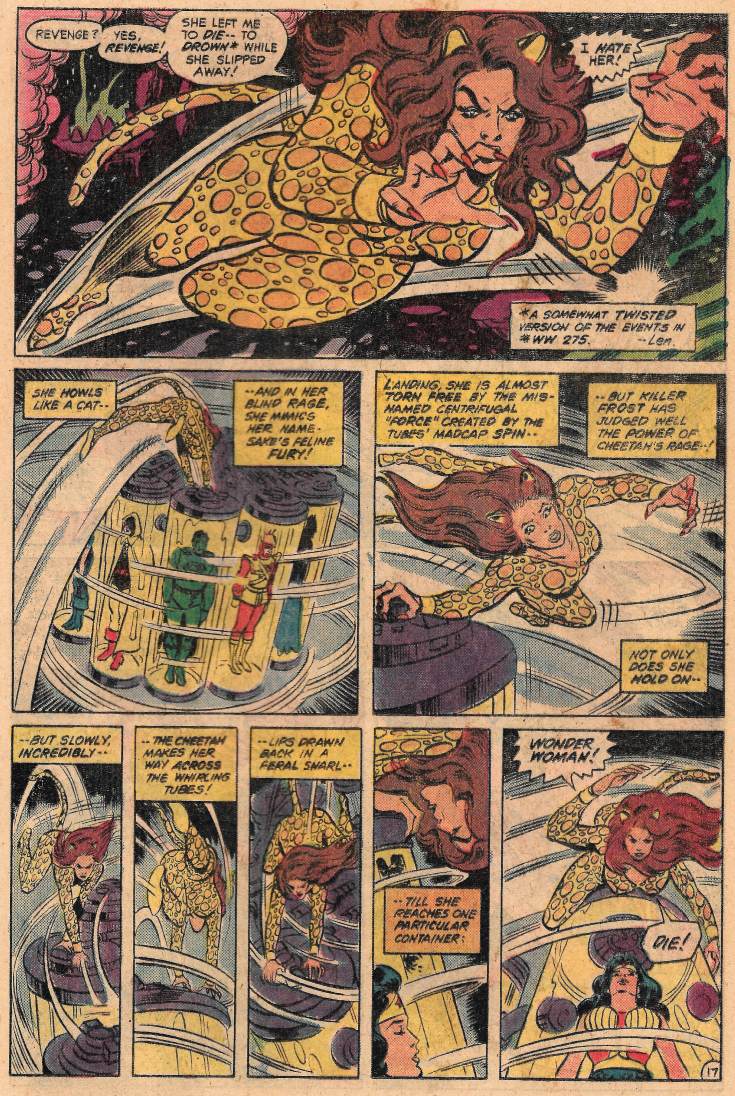 And by succeeding, I mean in breaking Wonder Woman free of her cage and disrupting the spinning carousel of doom. However, it then occurs to Killer Frost that she failed to take anything into account except foiling Ultra-Humanite’s plan. Never dawned on her that these heroes might be miffed at ALL the villains in the society, even former members. 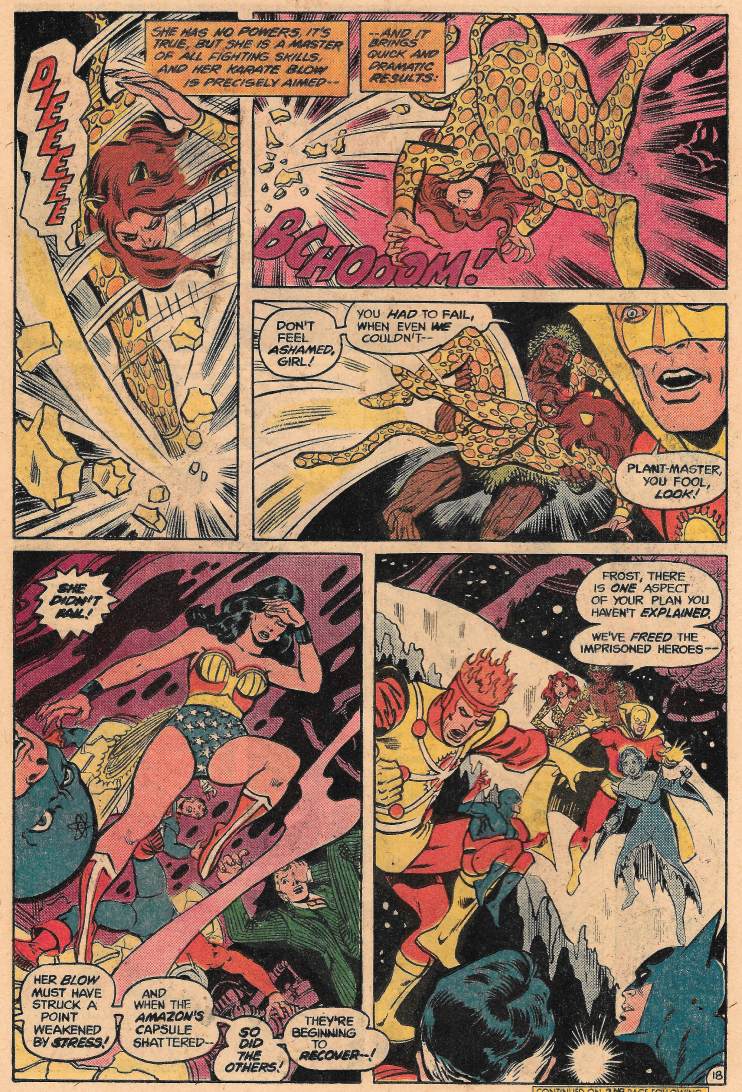 And they most certainly are! 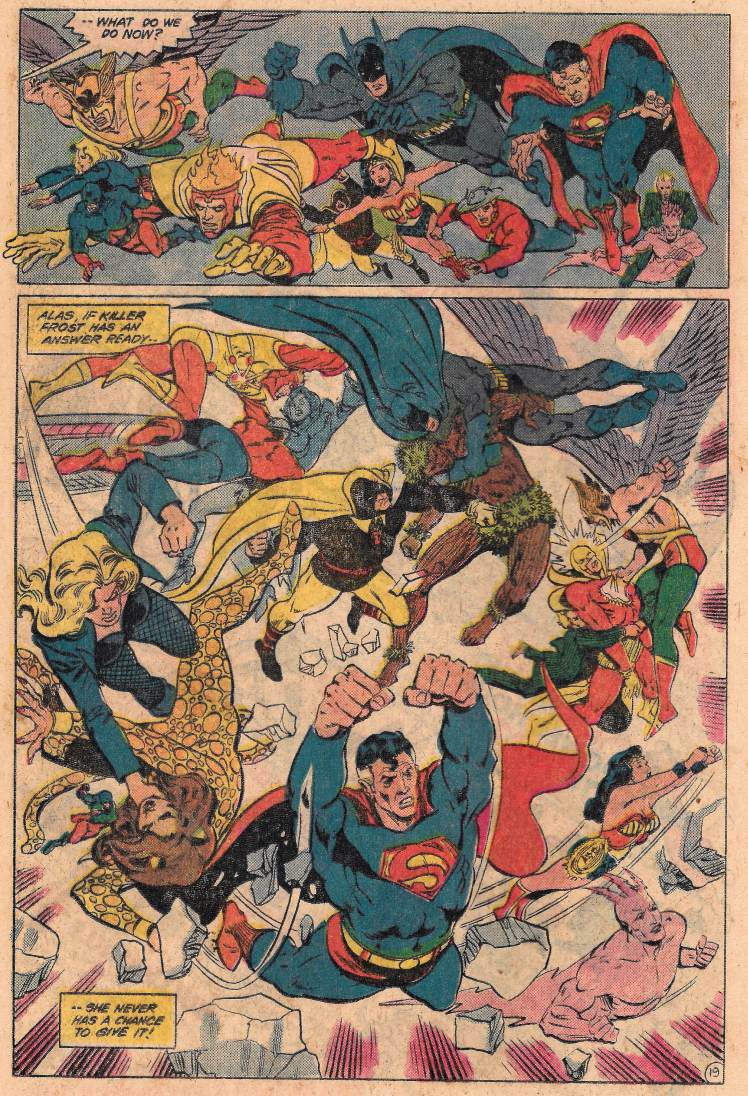 A short time later, after all the Earth-1 Society members are safely tucked away… 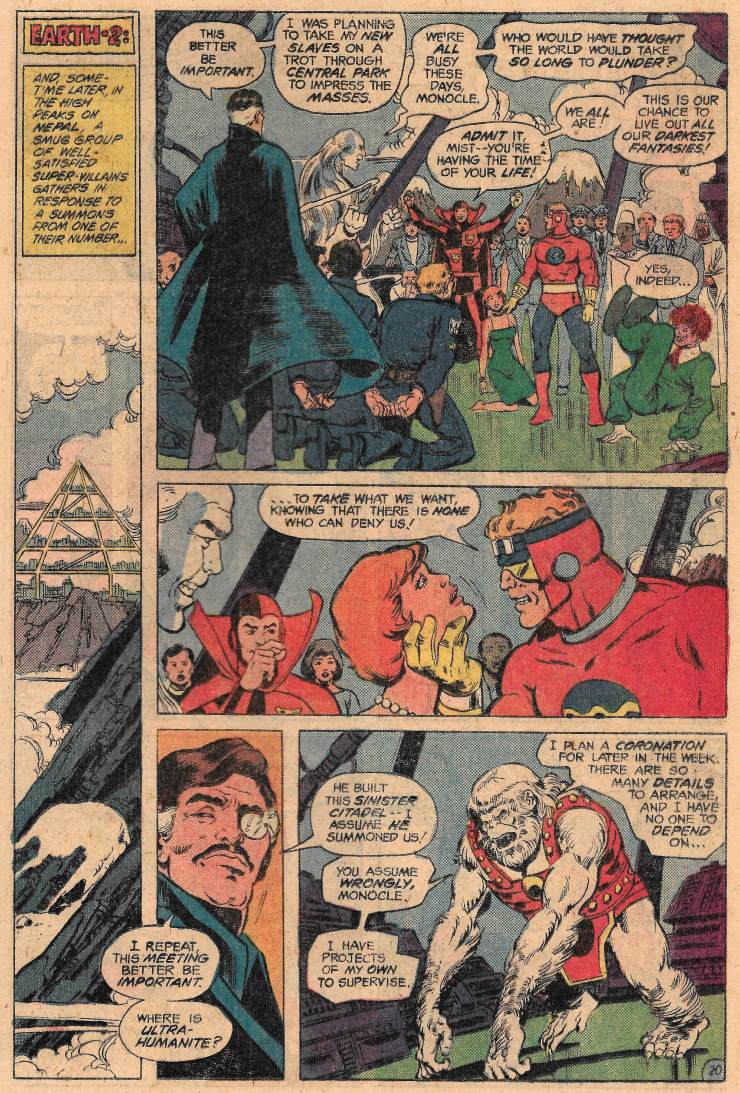 …the Society has pretty much taken over Earth-2 and they all meet to answer an urgent summons.

However, they can’t seem to figure out which of them initiated the summons. It is the darnedest thing. They go around the circle only to find that it is NONE of them…but someone else entirely. 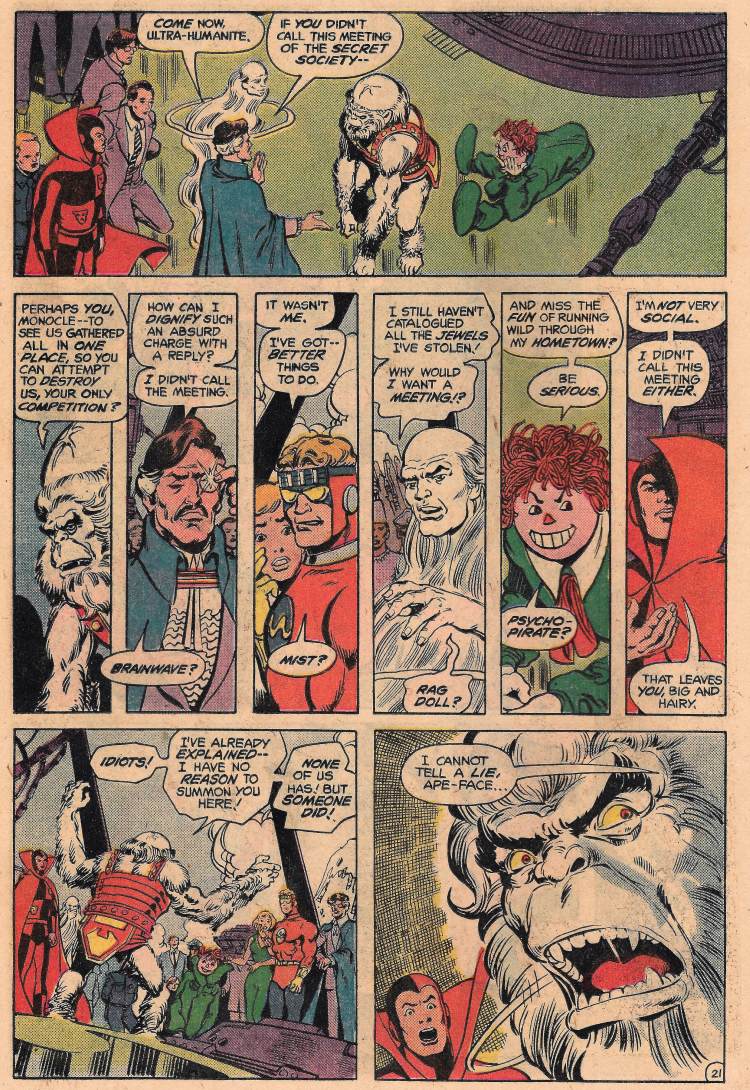 Batman, clearly still mad about having been taken down so easily by a fourth string villain, speaks for everyone. 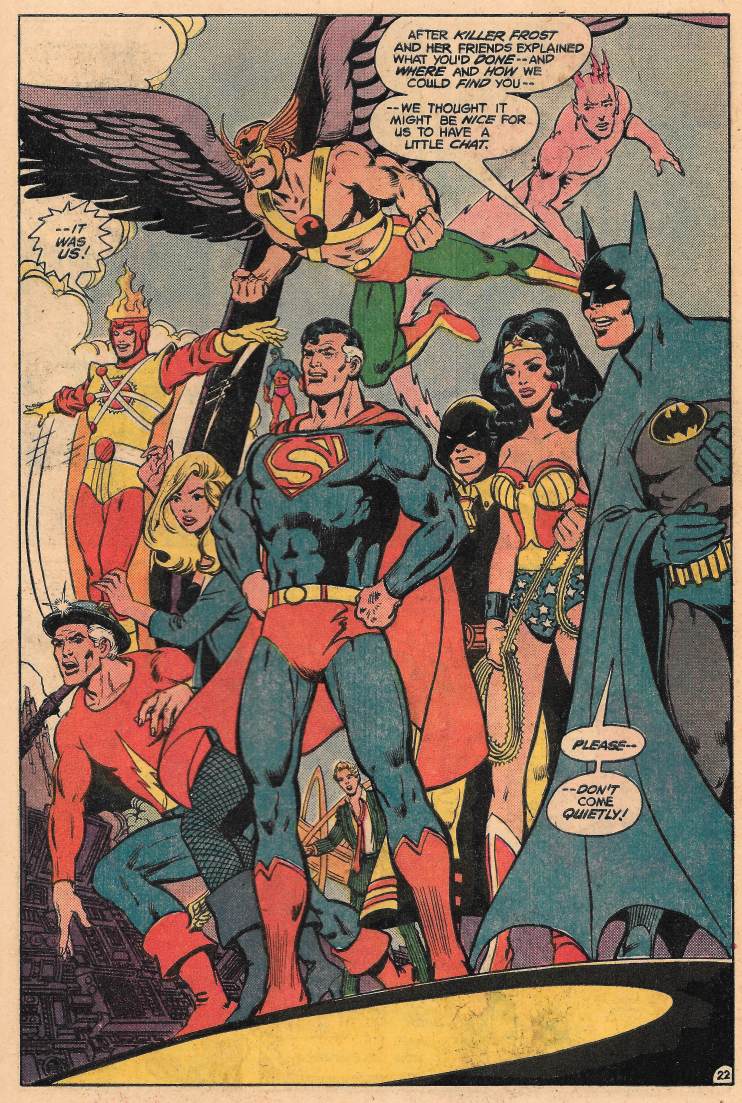 Love that two panel shot of Flash racing up to punch the living snot out of Rag Doll. In fact, all of these action graphics seem a bit vindictive on the part of the heroes. Looks like sending them to Limbo really hacked them off. 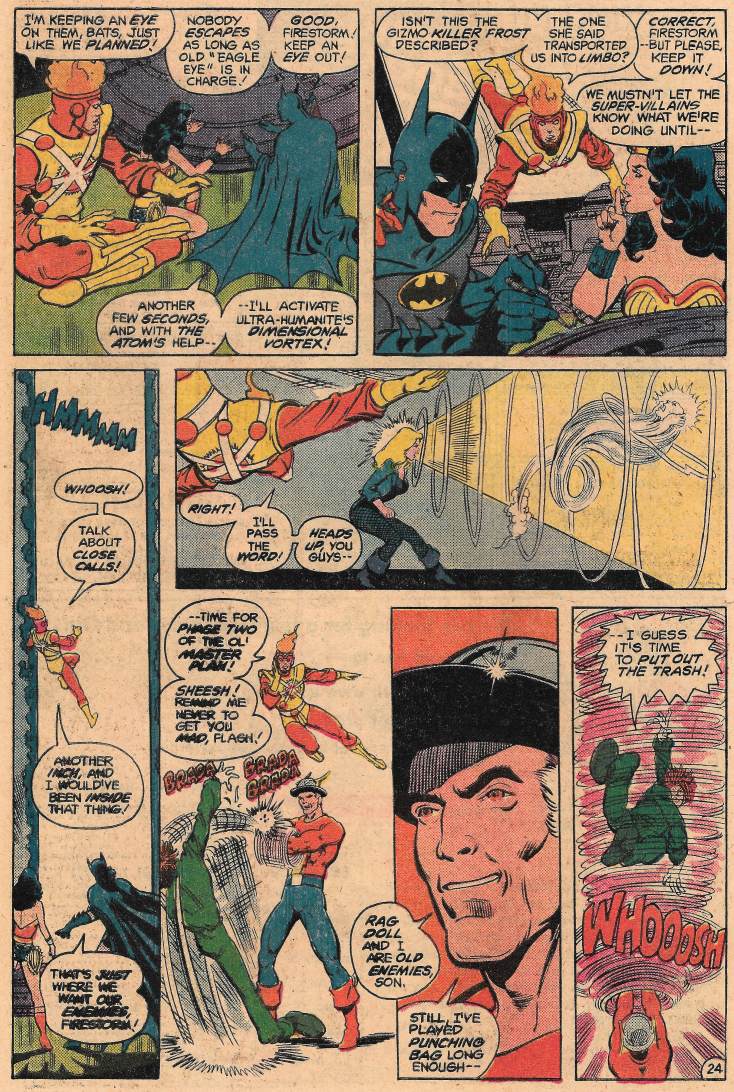 Which is proven on the next page as our Earth-1 heroes fix up the Ultra-Humanite’s Dimensional Vortex machine while their Earth-2 buddies get their final licks in. Once they are done it’s “one-way ticket to Limbo” time for the rest of the Society stating with Rag Doll. 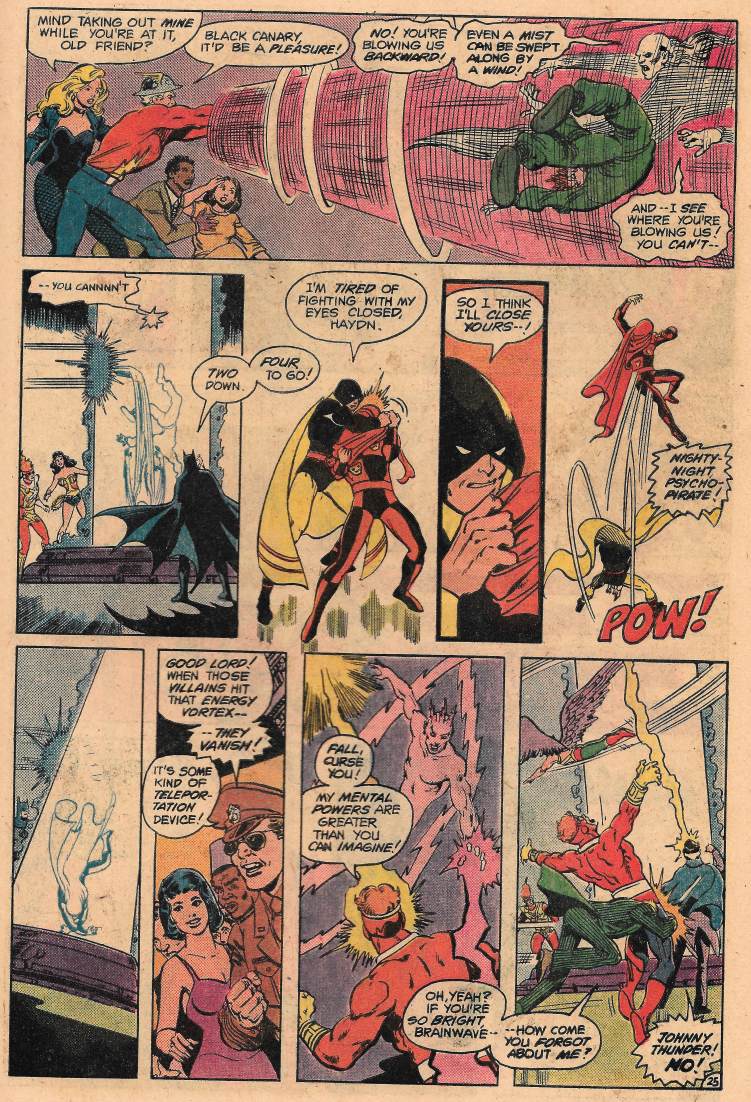 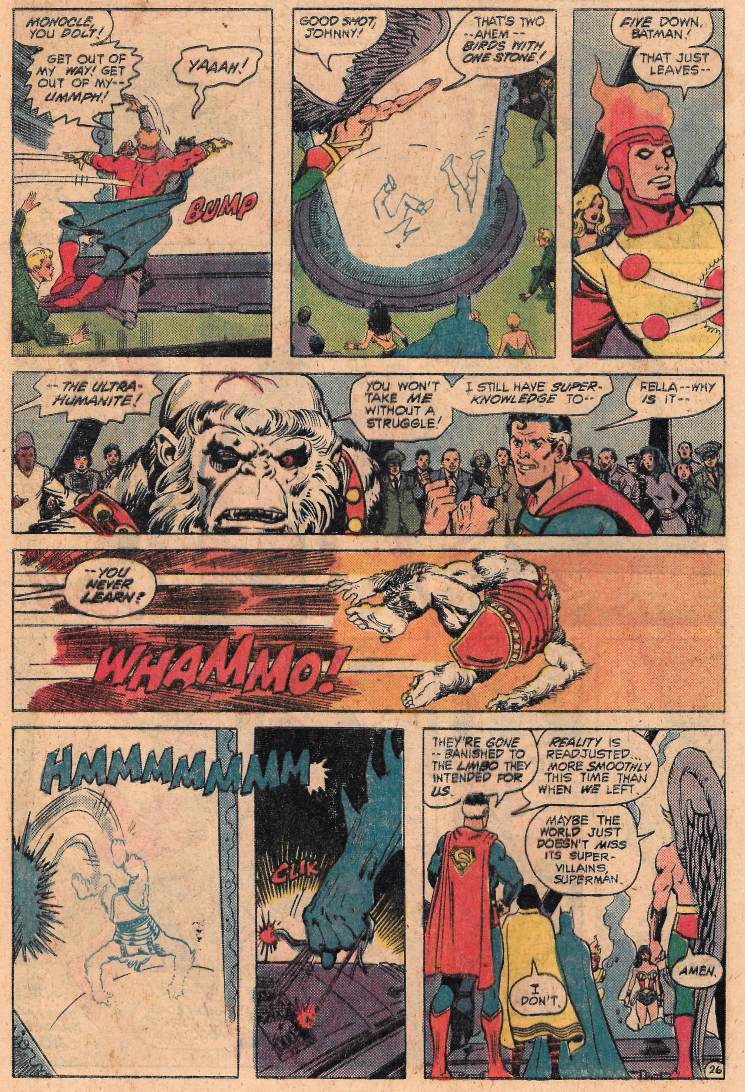 …and the Monocle, stumbles in after Brainwave is pushed into him. Then the still incredulous Ultra-Humanite makes like the eight ball to Superman Earth-2’s pool cue. WHAMMO! (that’s gotta sting a little)

With that we bid goodbye to this “team-up” and our five Earth-1 heroes head back to the satellite to check in on Hal and Ralph’s recovery. And we peek at the contents of Limbo to find Ultra-Humanite being chase by the remnants of the Society under threat of bodily harm. 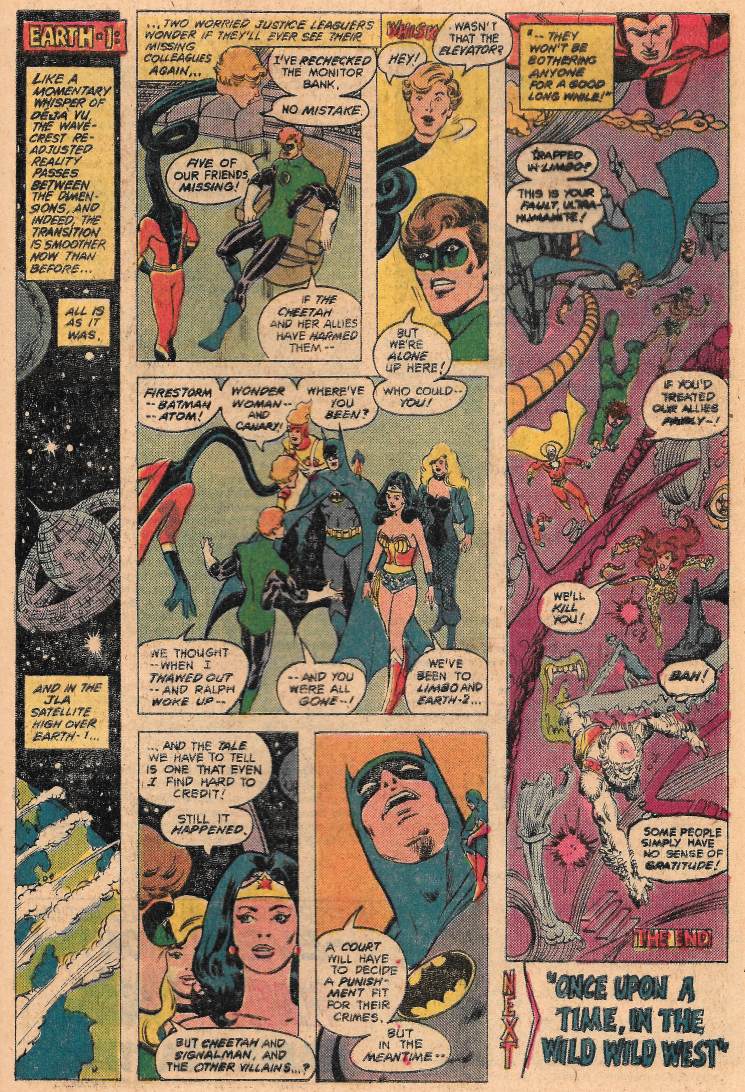 Great issue in both art and story. I like that it is a departure from the “heroes save the day” standard. I really wasn’t expecting the villains to screw themselves up in this one, even given the double-cross. I firmly believed the heroes would find their way out somehow.

The ending has some great shots, that group shot looking amazing, but if I had one gripe it is that it is over too quickly. We look forward to the villain’s comeuppance for two whole issues and the three pages of sock’um is just too brief. And it would have been good to see more teamwork in play with the physical altercation and not just the overall plan to send them into Limbo.

But all gripes aside, this was LOTS of fun with amazing Perez art.

Hope everyone enjoys the movie! I’ve got my tickets in hand and I’ll see you back here on Monday for some more great Justice League related books
Posted by SonOfCthulhu at 3:09 AM