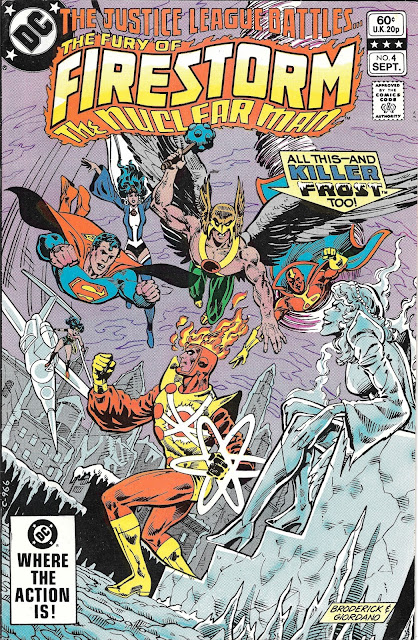 I’m skipping over Firestorm, as Ronny Raymond has long been considered the Justice League’s young upstart. Ever since his addition to the team in JLA following his series abrupt cancellation after issue 5 back in 1978. The character is in most instances show as a hero-in-training, occasionally exhibiting a hot-headedness to match his physical persona.

The amalgamation of teenage football star Ronnie Raymond and physicist Professor Dr. Martin Stein, Firestorm has a teenager’s impulsiveness and immaturity that is only tempered by Dr. Stein’s wisdom when Ronnie heeds his “inner voice” warnings. 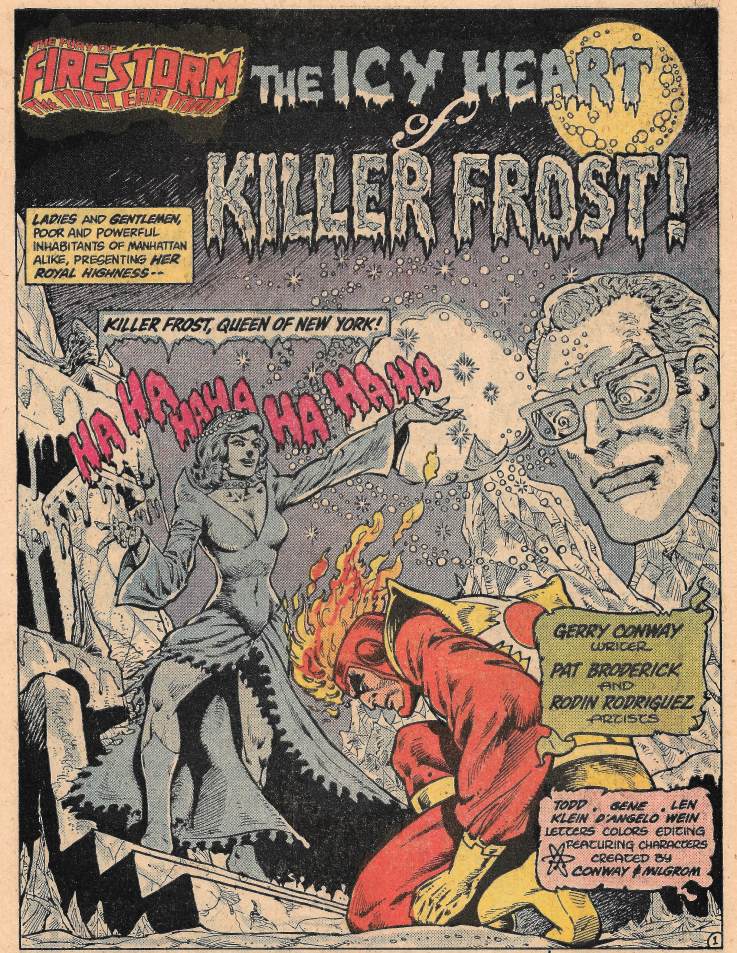 Here in his second go at a solo series, Ronnie has met his match. Killer Frost, an old “flame” if you will, has taken all of New York City hostage. Using her growing power to freeze the entire city and its inhabitants means Ronnie must bow to her wishes. That means kneeling at her command. 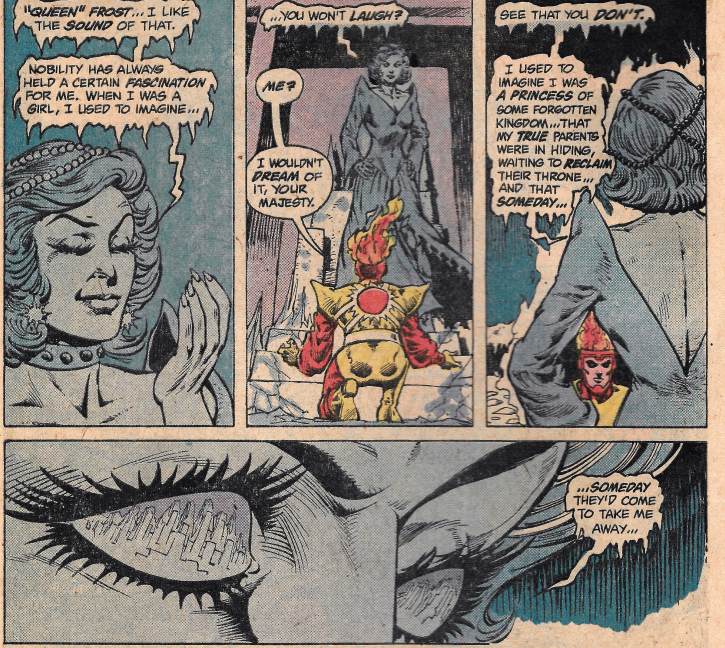 But it doesn’t mean he has to like it… 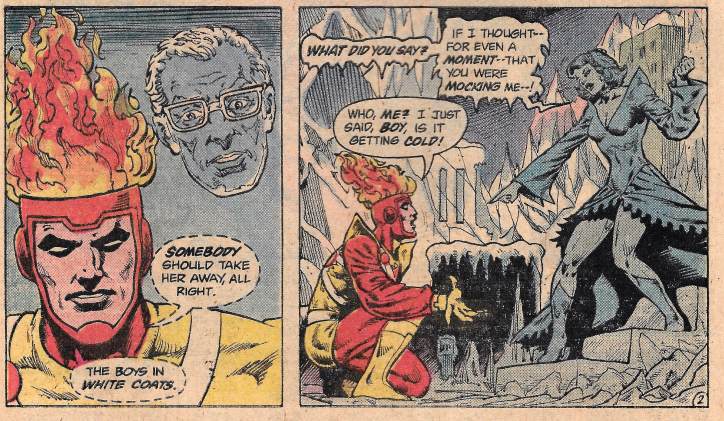 Ronnie quickly covers and swears he will help her any way he can if only she won’t hurt anyone. 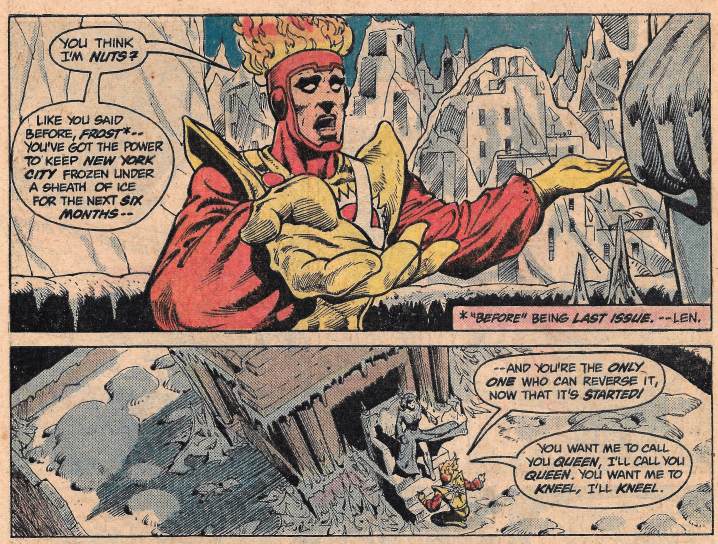 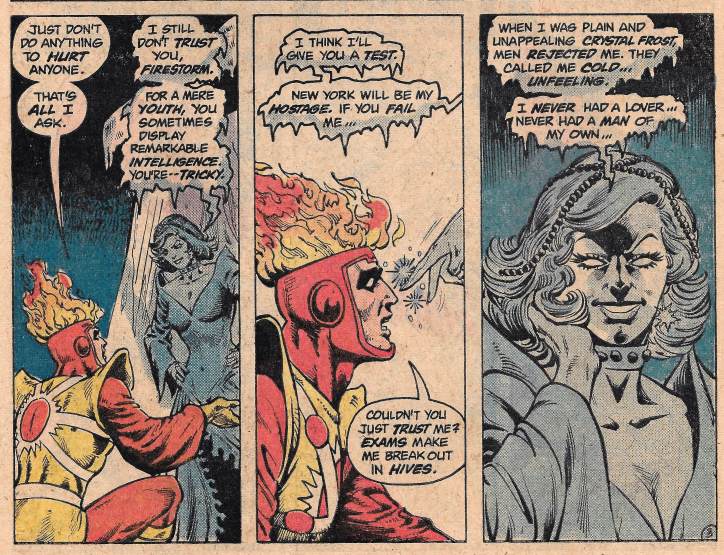 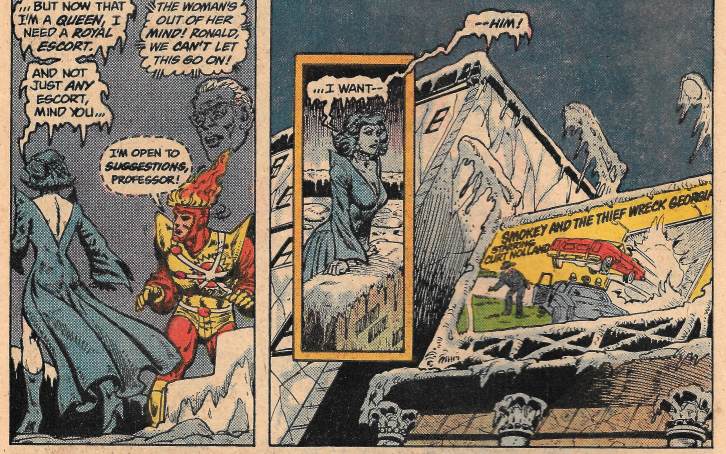 Whew! Ronnie dodged a bullet there.

Frost then causes the billboard to fall, threatening to crush all the people below and Firestorm uses his powers to turn the sign to snow.

She gives Ronnie eight hours to bring back Curt Holland, which is just enough time to get there and back. As Ronnie jets off, Frost freezes a bird because she’s a cold hearted bitch and to prove to the audience that she means to make good on her threat. 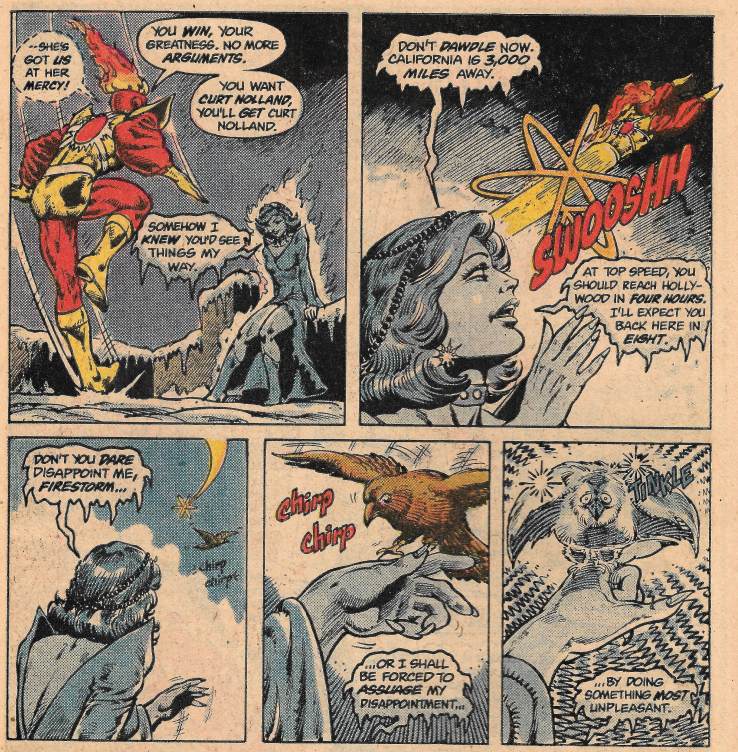 Ronnie better hurry back with the actor. Only one problem with that: 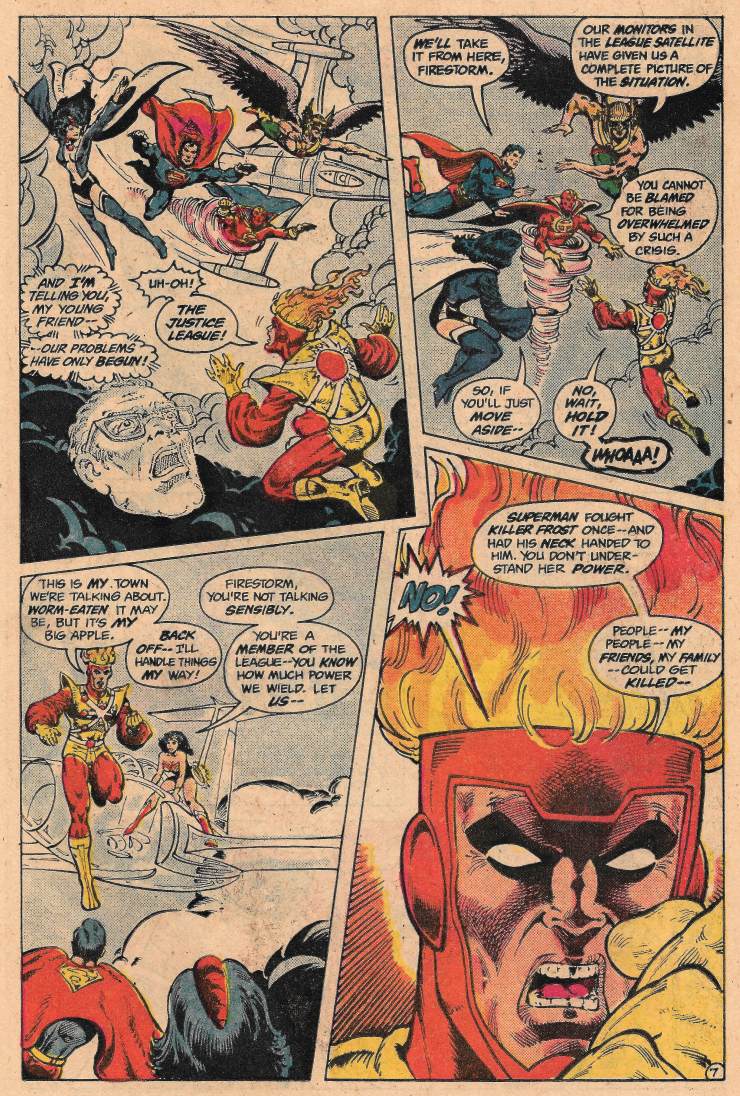 The JLA meets him half-way. The group wants to step in and take down Killer Frost and part of me thinks THIS is a great idea. The powers of Superman and Zatanna should be enough to capture Killer Frost and get her to reverse the freeze she put on Manhattan. Ronnie, however, thinks otherwise.

Fear of what might happen to his friends and family causes Ronnie to block their attempts at helping. Or at least to attempt to block it…with a giant steel wall. 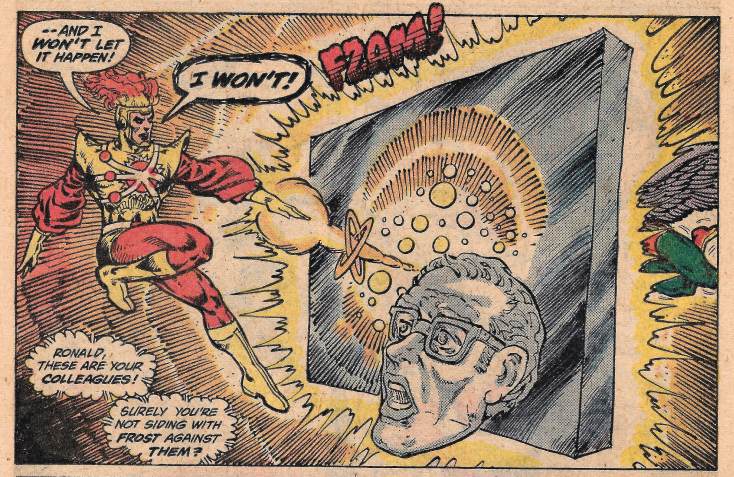 But much like MANY wall concepts, they do no good if people can just go over or around them. Or if, as in this case, they aren’t anchored to the ground. Ronnie isn’t giving up yet, though. 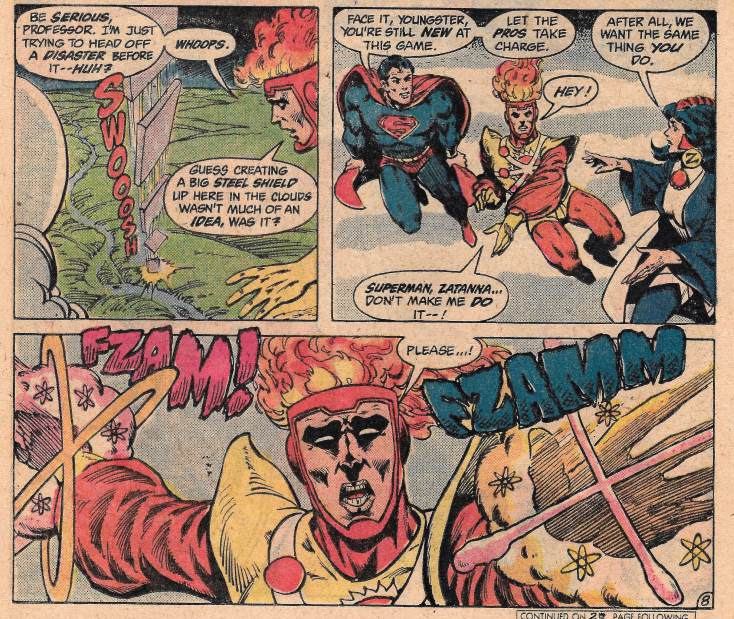 And his first offense is a doosey! He balls up Zatanna and Supes, her in steel and the man of steel in Kryptonite. THIS is why Firestorm is one of the most powerful Justice Leaguers…if written correctly. 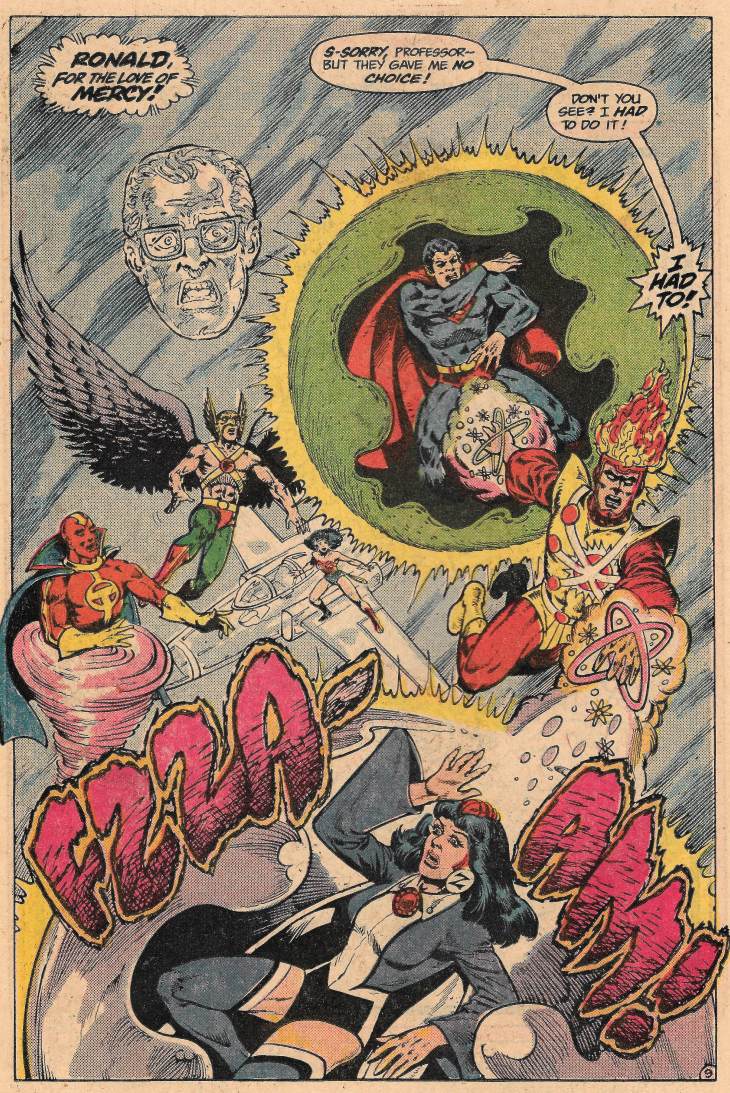 Wonder Woman springs into action to save Clark, using her magic lasso and invisible jet to save him from hitting the ocean. Spared a watery grave only fixes half his problem though. Using her Amazonian might, the princess breaks him out of the globe of deadly alien mineral. 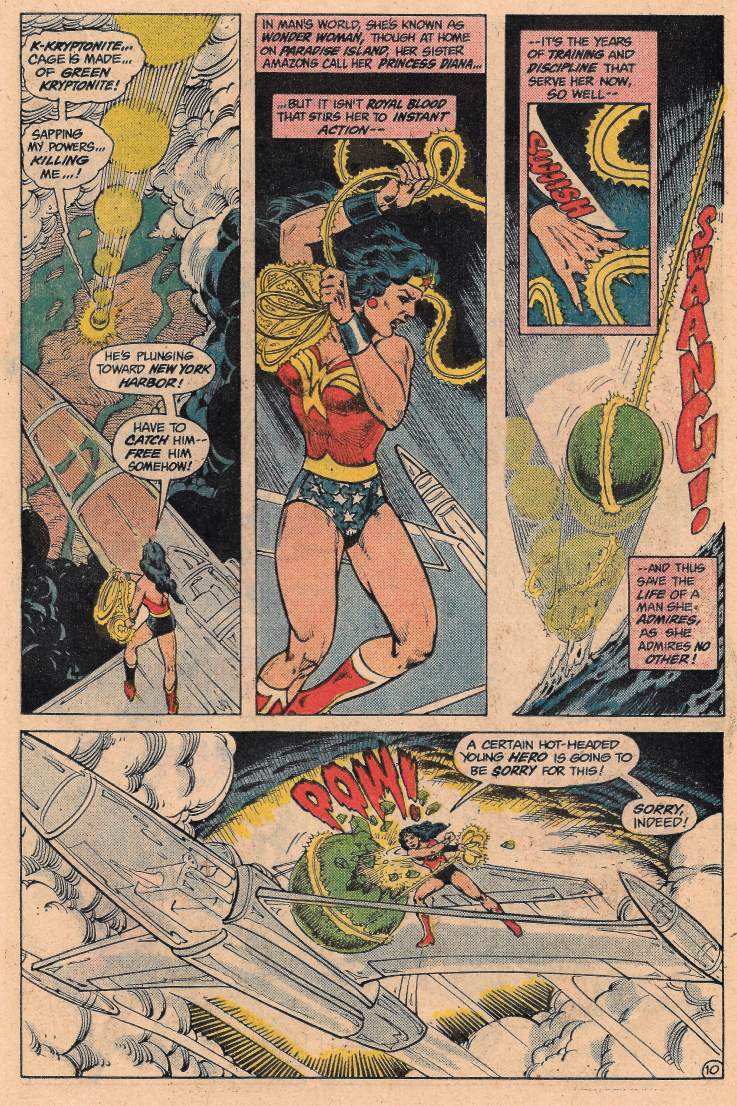 Meanwhile, Reddy and Hawkman slow Zatanna’s ball enough that she can use her magic to break free. Then the trio meet up with Clark and Diana to face Ronnie again, but it seems the frustration at his situations has gotten the best of him. 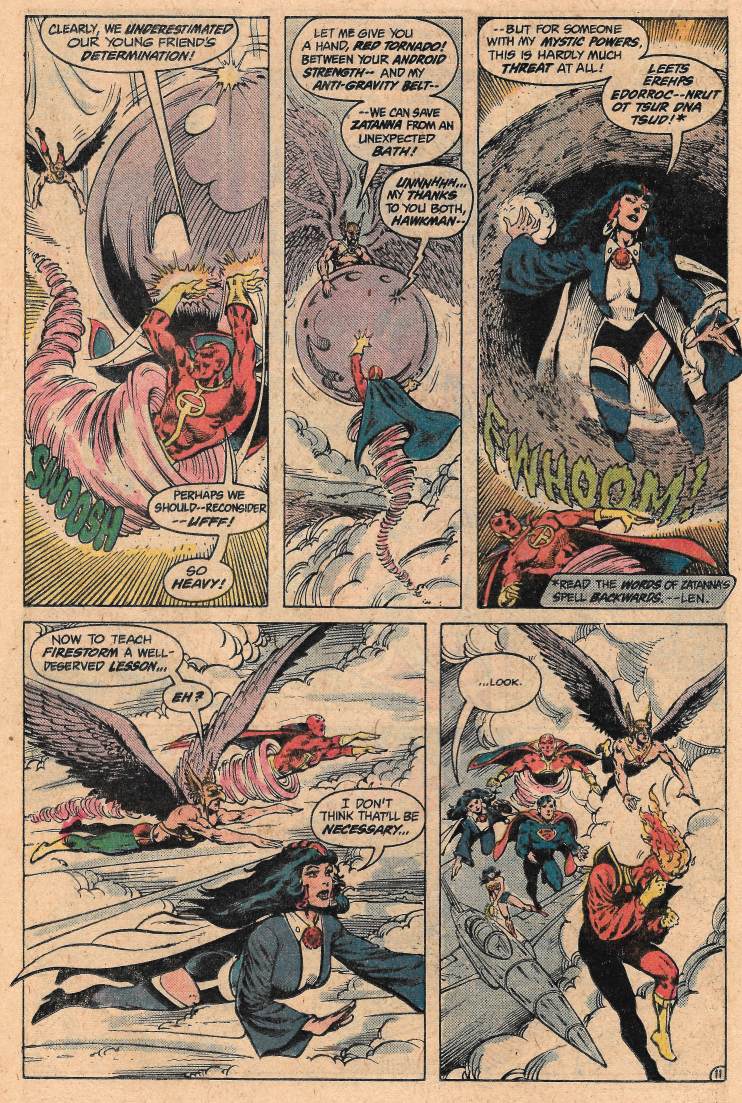 And unlike every other altercation, the parties in this one stop and talk it out, deciding they were both wrong. Knowing they need to work together means a visit to the JLA satellite… 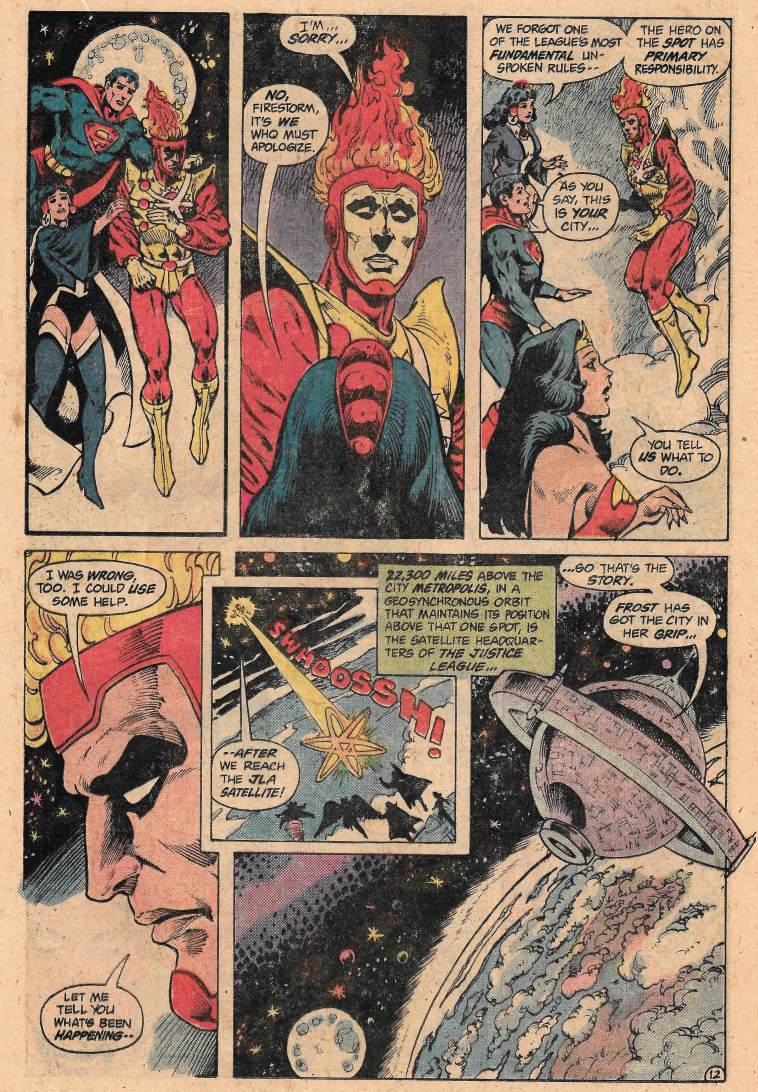 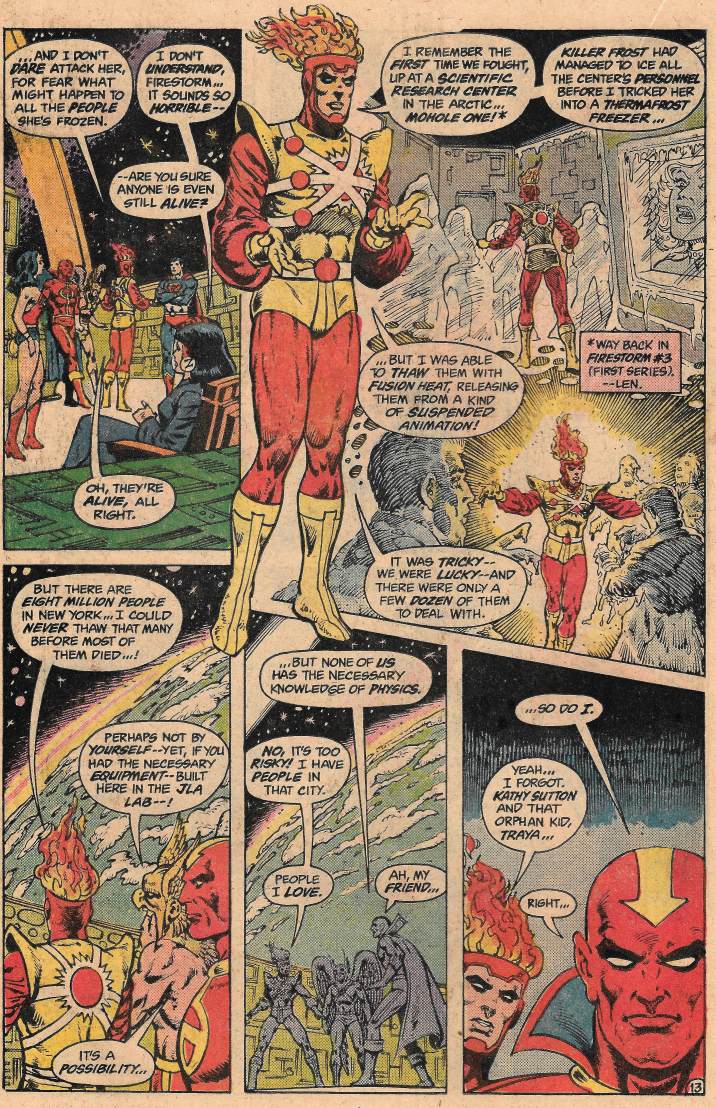 …and use Dr. Stein’s scientific know-how along with the resources and help of the JLA to engineer a device to save New York. This is a nice bit here where Stein gets to meet the JLA, the JLA learn’s Firestorm's dual-identity secret, and Stein sees Earth from space with his own eyes. It’s a neat sequence and Broderick does a great job capturing it. 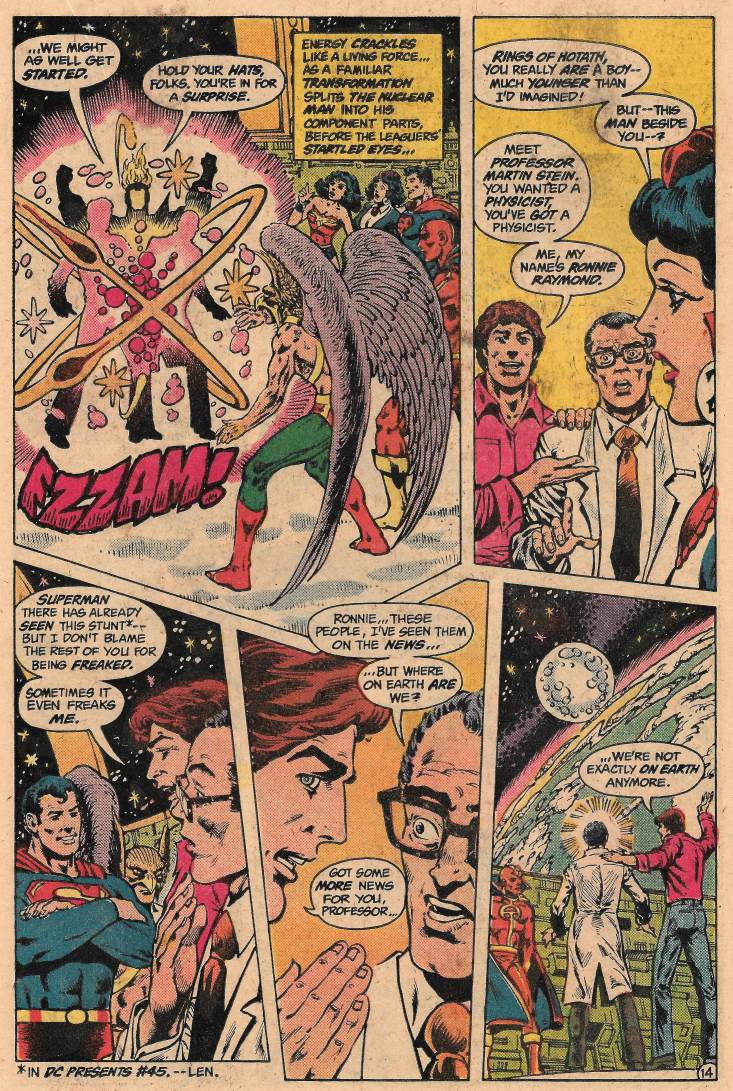 And while Dr. Stein is at work on the unfreezing machine, Red Tornado takes Ronnie Raymond to Hollywood to secure Killer Frost’s expected boy toy. This is a nice bit with the two JLA’ers as they streak to find Curt from the teleporter location. 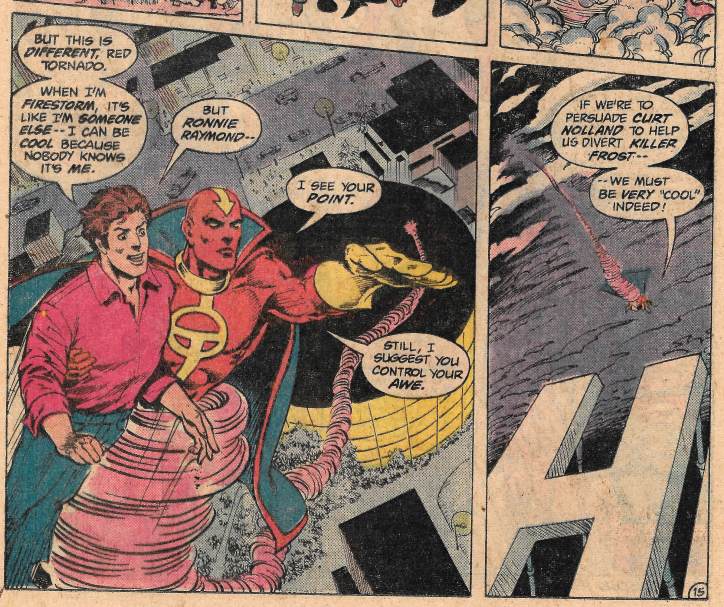 It’s this point where we meet Curt Holland for the first time. He performs a dangerous car stunt on his own and then jumps out of the car looking very much like a young, Smokey and the Bandit-era Burt Reynolds. 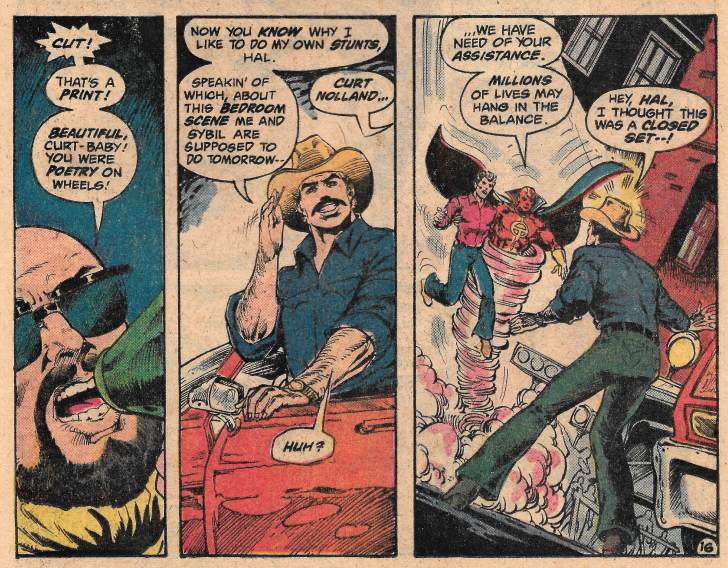 Only thing is that Holland isn’t the larger than life image portrayed on screen. And his refusal is a death sentence to all Ronnie holds near and dear. 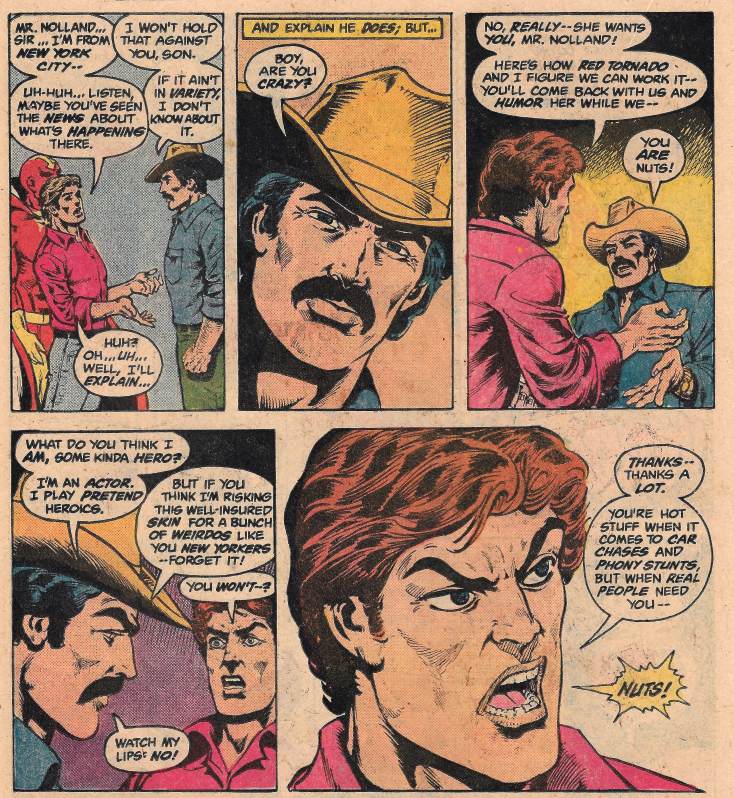 Reddy ends that thought with “…they tend to disappoint you.” I like this sage advice coming from Red Tornado, of all leaguers. It seems awkward to think the Ivo created, android-who-harnesses-the-air-element acting like a human father-figure, but it works here.
When they get back, Stein is finished, but the machine weighs a hundred pounds and is the size of a small backpack. It works like a charm though, but Ronnie has to figure a way to smuggle it close to Frost. We fade out on him asking Reddy if he’s busy this evening.

Not knowing what the kid has in mind, we jump over to find Frost menacing the Mayor and two city councilmen. Right then Firestorm shows up with – surprise, surprise! – Curt Holland! 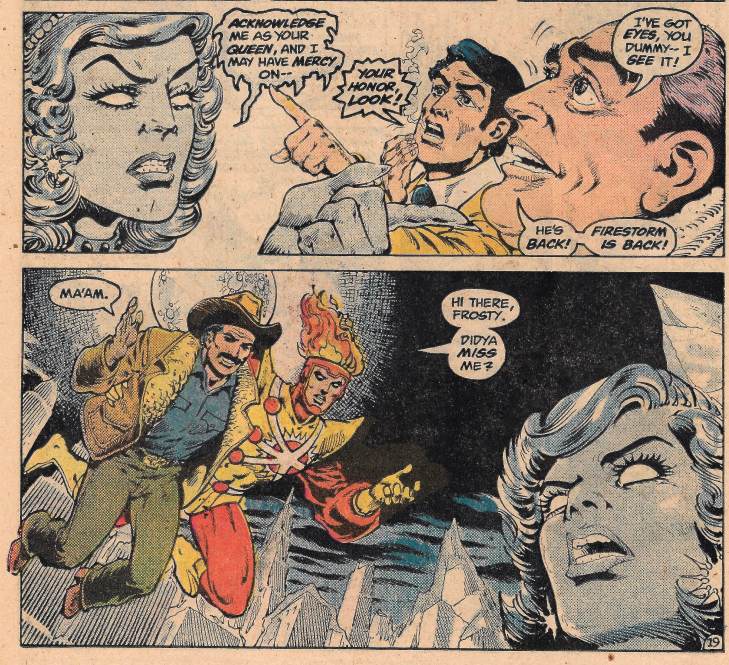 For someone made of frozen ice, Killer Frost gets all hot under the collar all of a sudden. Curt makes like a gentleman, setting Frost on fire for a hot kiss. A hot kiss that goes cold for the lady villainess in all the wrong ways. 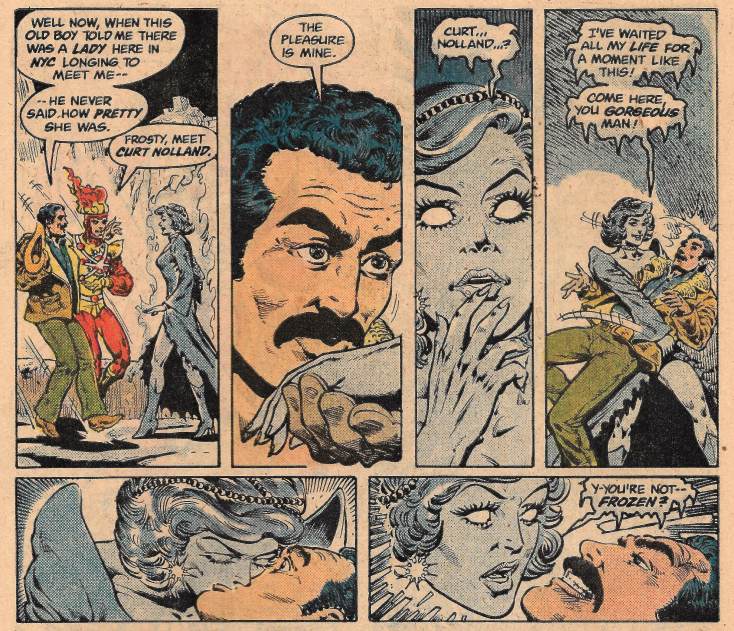 One blast makes it common knowledge that “Curt” is really Reddy in disguise, meaning Firestorm is in the hot seat from the scorned Frost. 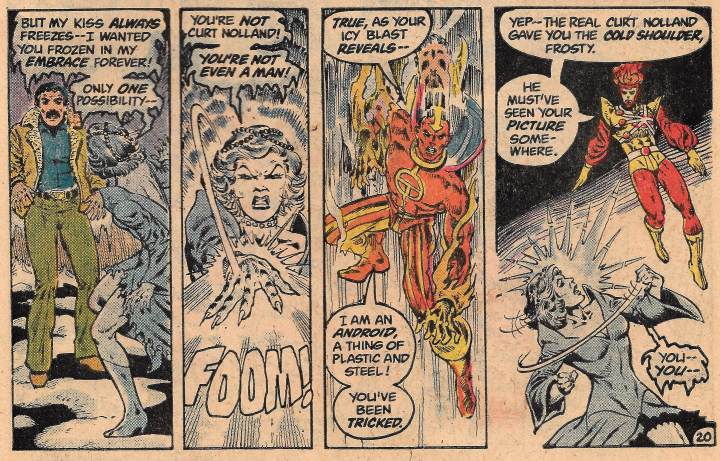 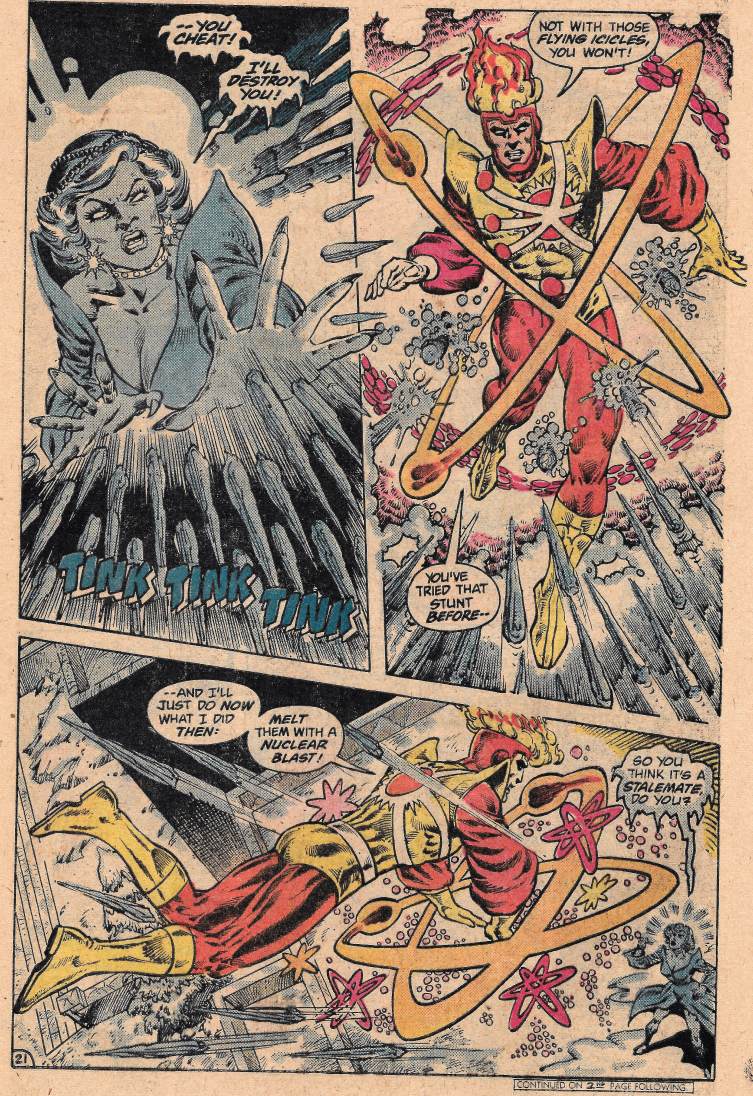 …but keeping her distracted from the true threat, that of Reddy activating the Thermafrost Freezer concealed in his chest cavity. 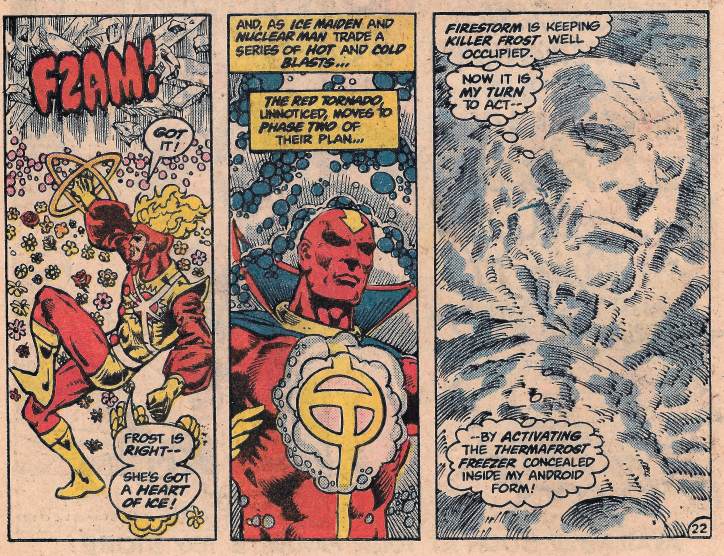 The device weakens Killer Frost to the point that Firestorm can deliver a coup de grace. 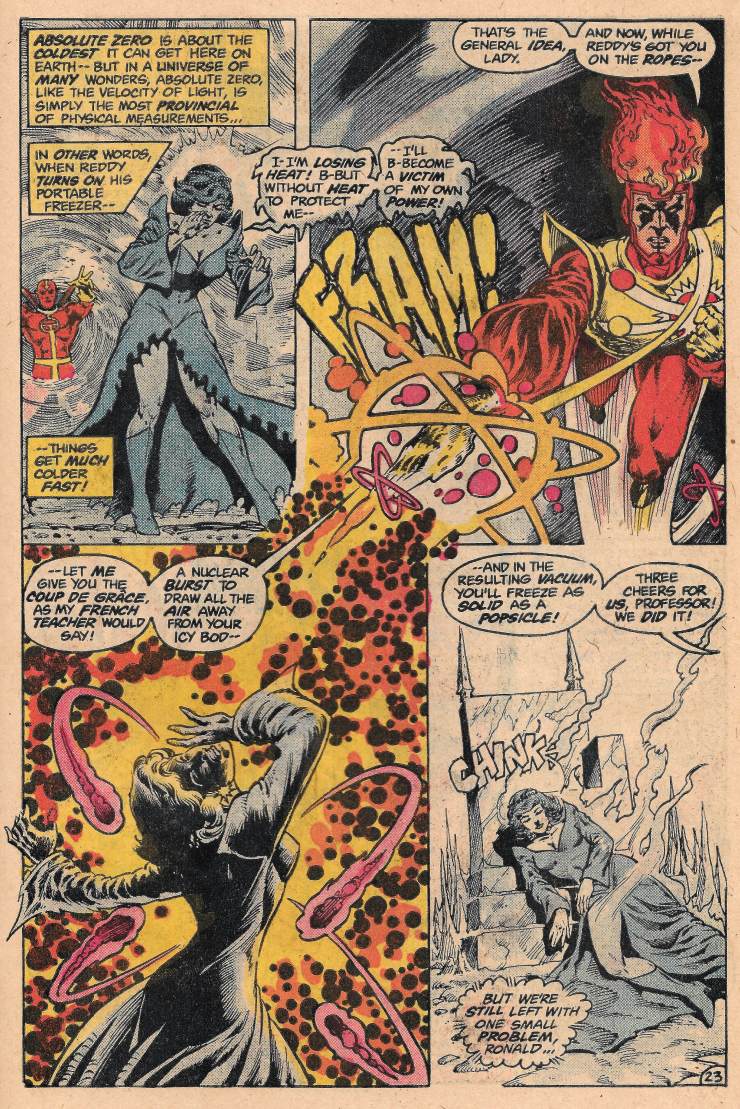 But it isn’t over yet! Taking out Killer Frost wouldn’t ensure victory if Manhattan’s population was the price. That’s what the device in Reddy will fix. However, he’s iced up now and unable to move. What he needs is a burst of energy to complete the job, say something on the scale of a blast from Firestorm. 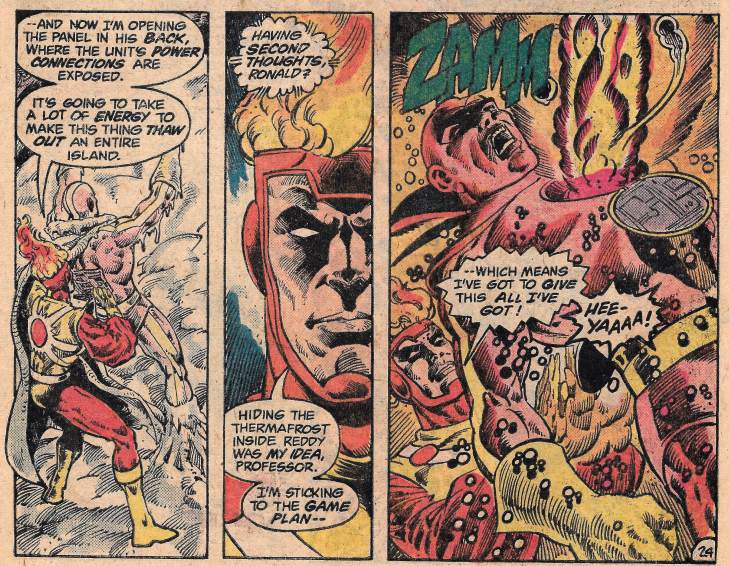 And with that, the two heroes save the city and they even do it in front of a gracious mayor. 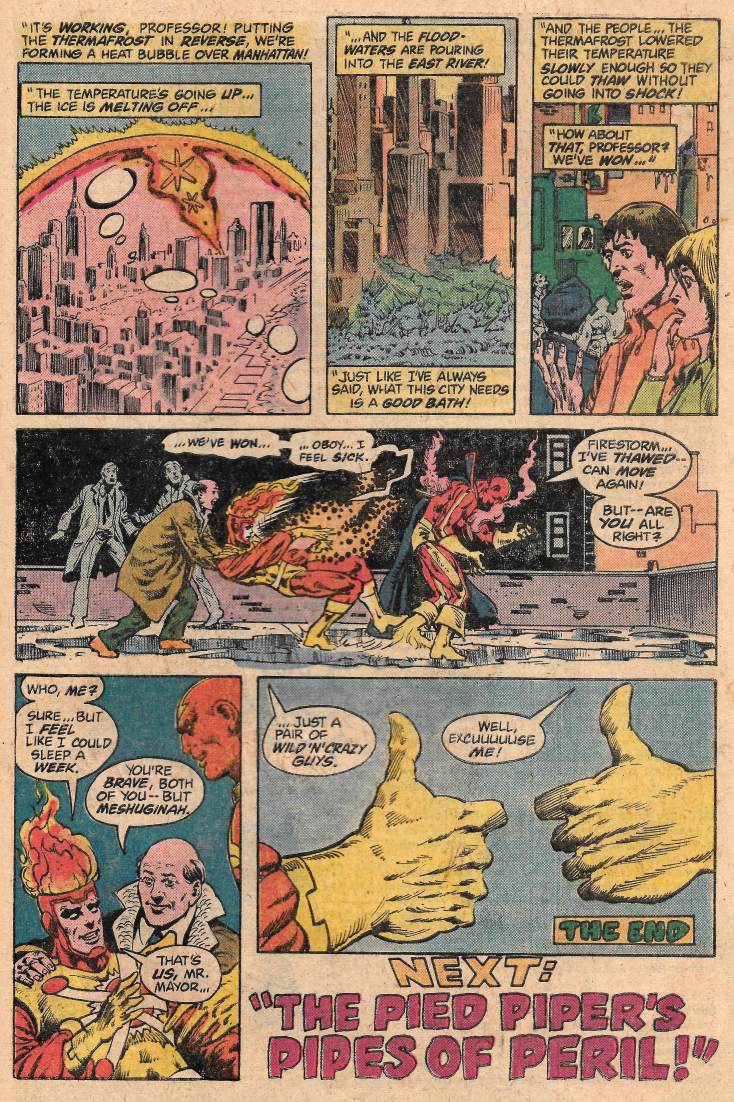 Loved this tale quite a bit. Quibbled over including it but decided in its favor due to the amazingly good Gerry Conway story and the inclusion of a fellow JLA’er for most of the tale. And Reddy has always been a huge part of the JLA.

Firestorm was not a character I followed as a kid. Always wanted to though. And when I started collecting again after high school, DC was doing all sorts of odd things with him. I was content to stick with the Charlton hero Captain Atom’s rebirth as a replacement.

Which is sad, because these seem like good stories. I’m on the lookout for early issues now because I want to see more of the JLA’s young hot-head!
Posted by SonOfCthulhu at 2:50 AM