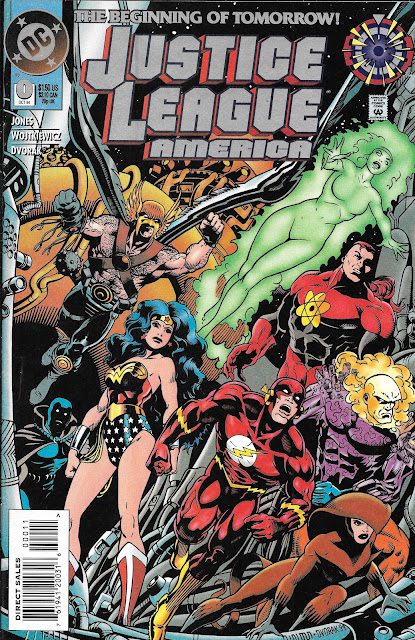 …and now for the dreaded leftover turkey

The day after Thanksgiving is a special time. A time when you feel bloated and over-stuffed. A time for most of us to appreciate the three-day work week. A time of standing in the cold in lines that go on forever for $20 off a big screen television.

It is Black Friday.

A day made for leftovers...

And what would be a better leftover than another helping of yesterday’s turkey?

Today we turn to the “zero hour” issue of the Jones-Wojtkiewicz mess of Justice League America to see if the book looked any better opening day. And if you want a delicious second helping, here's a link to Coffee & Comic's take on this same issue.

This particular turkey begins with Flash saving a girl falling from … somewhere (those windows all look closed)… while thinking about being “as normal as everyone else.” His fear of his recent timestream journey appears to be eating at him, moreso that I remember it doing in his own monthly mag. 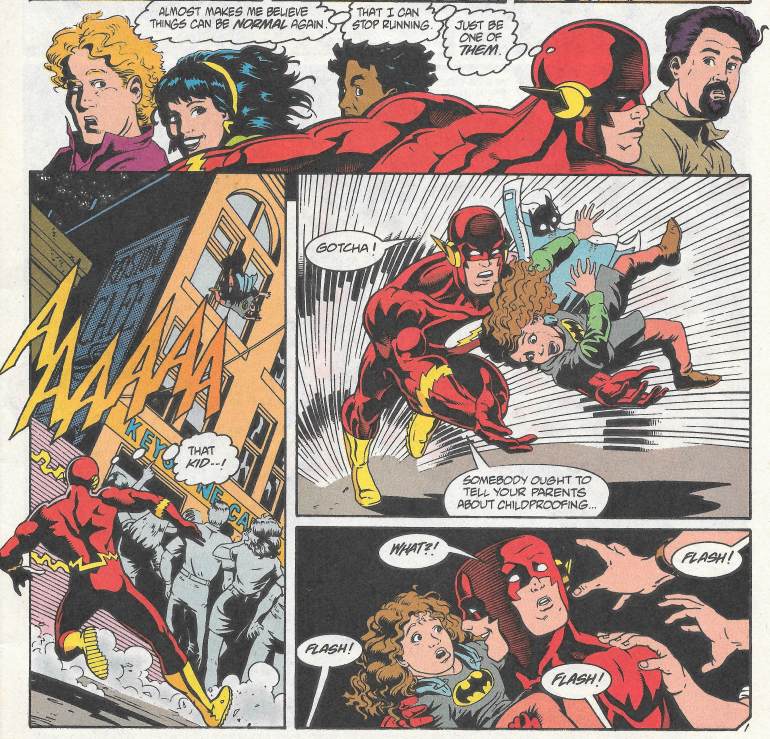 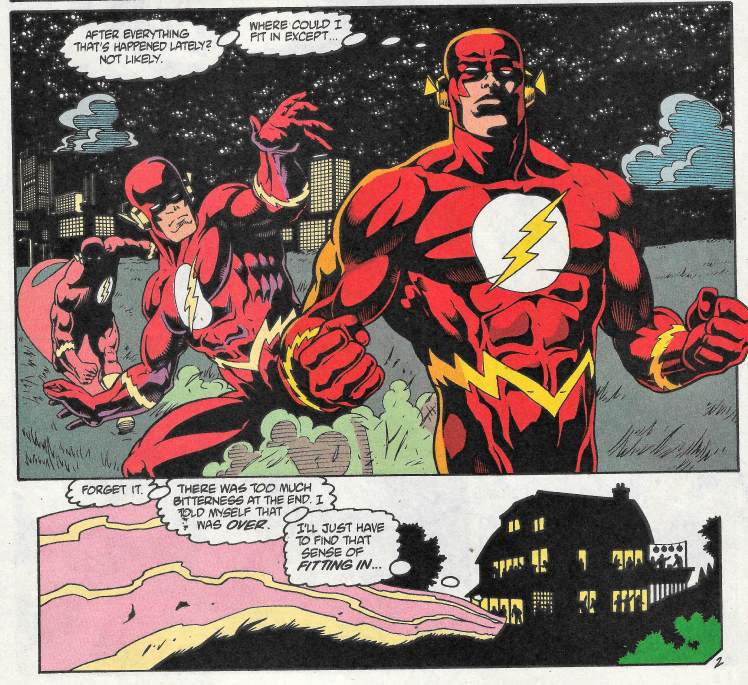 Nice appearance by the Chunk there for a couple of panels, but even here he feels too out of place. He is an oddity that fascinates everyone the way a celebrity would. So, he ends up racing to the satellite pickup co-ordinates. 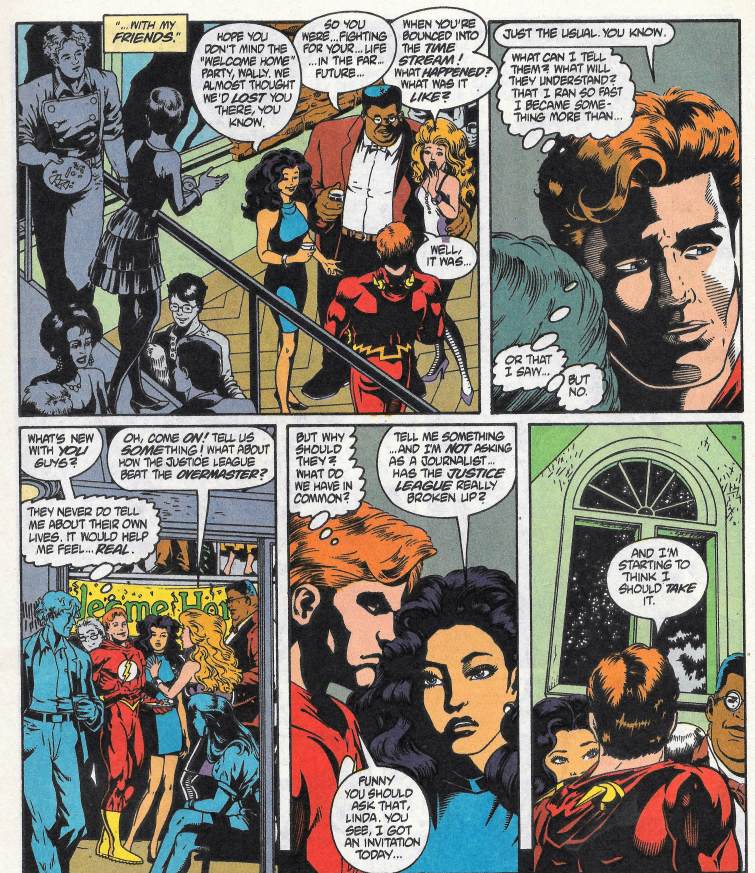 But what picks him up when he arrives… 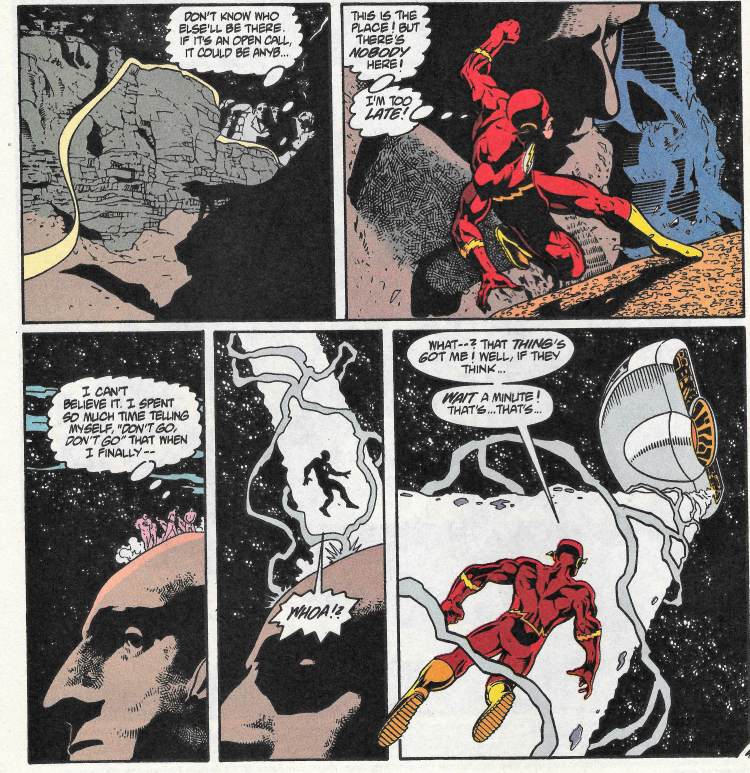 …is the Overmaster’s escape pod and not the JLA satellite. 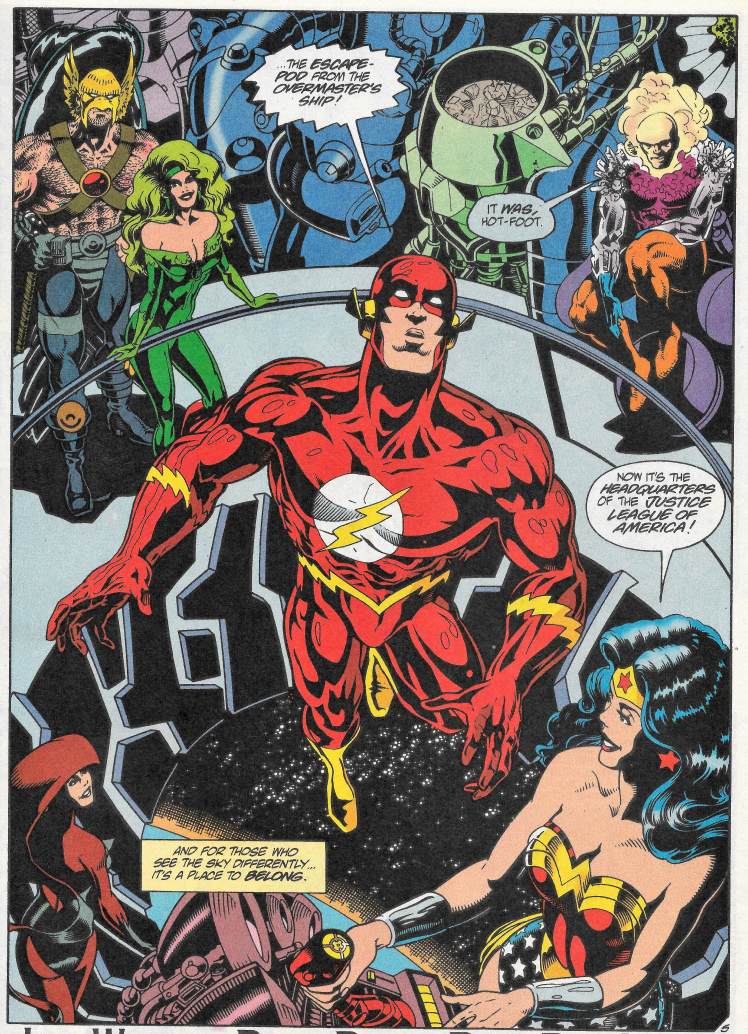 Here is the sad part of Jones’ run being so awful: there is a neat sort of balance to this JLA team. A balance that is totally wasted.

Certainly, you’re missing a brains at this juncture as Wonder Woman can be heart and muscle of the team, but not all three. Why would she need anyone else, then?

If only they had retained Ted or Ralph, I would have bet money on this being a great lineup. Instead we need to look at who we do have on the roster.

But first a little comment on Jones trying to emulate the “funny” part of Giffen’s league by having Diana tape homemade signs on the wall: it doesn’t work. It makes her seem like an airheaded high school girl and not the amazing Amazon princess/powerhouse. She’s a warrior in some aspect, a leader. Don’t reduce her to being a ninny. 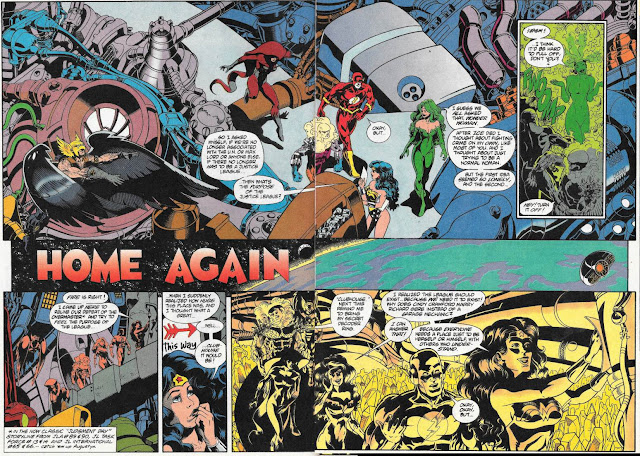 But no, she gets to call the satellite headquarters a “club house” because Jones is making her out to be child instead of a grown woman. Sad.

Fire’s motivation seems better, but again she’s all impulse and little follow through. She certainly isn’t the brains of the group, nor its heart. If anything, she’s supposed to represent is its sex appeal, but that only works in limited doses throughout this.

We move on to Hawkman who, to be honest, I have no idea which Hawkman this even is. It certainly isn’t Carter Hall or Katar Hol, as this cat has never been on any team, according to his own admission. Not even the writer appears certain of his name as it isn’t mentioned. My Wikipedia of the character shows no clues who he is. 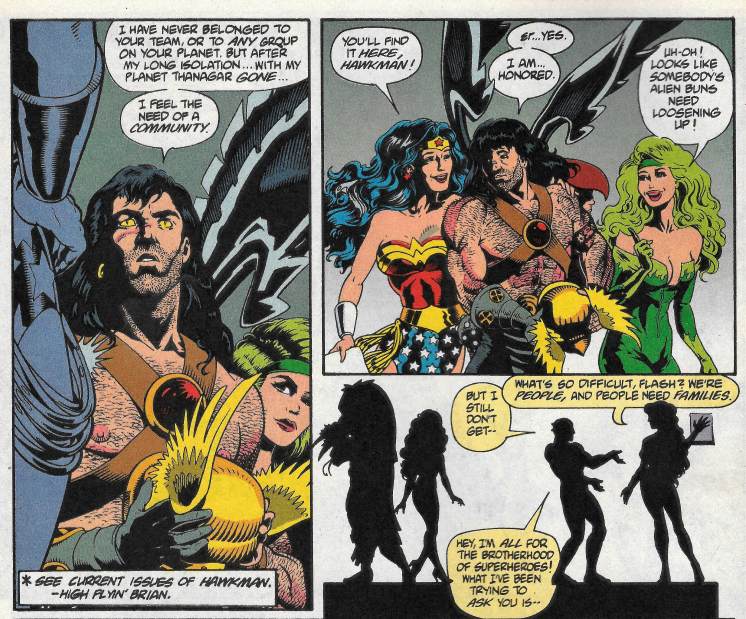 But who he isn’t is the brains of this outfit. Hawkman was frequently a hot-head with a strong right-leaning authoritarian streak that approached battles like a flying human-gladiator. Blame the guys that created him for giving him a spiky mace as his weapon. How can you carry one of those around and it not be “bash their heads in” as your primary offensive strategy?

Flash goes to the trouble of pointing out the signs, and Wonder Woman states that they are orbiting the globe doing pickups from many sites. The signs show the way to the new, weird central meeting room.

Meanwhile in Death Valley, Obsidian and Nuklon are awaiting their pickup point. Nuklon is all optimistic and Obsidian all pessimistic, neither of them having a realistic enough perspective for me to feel comfortable with their views on things to trust that they would be the brains here. 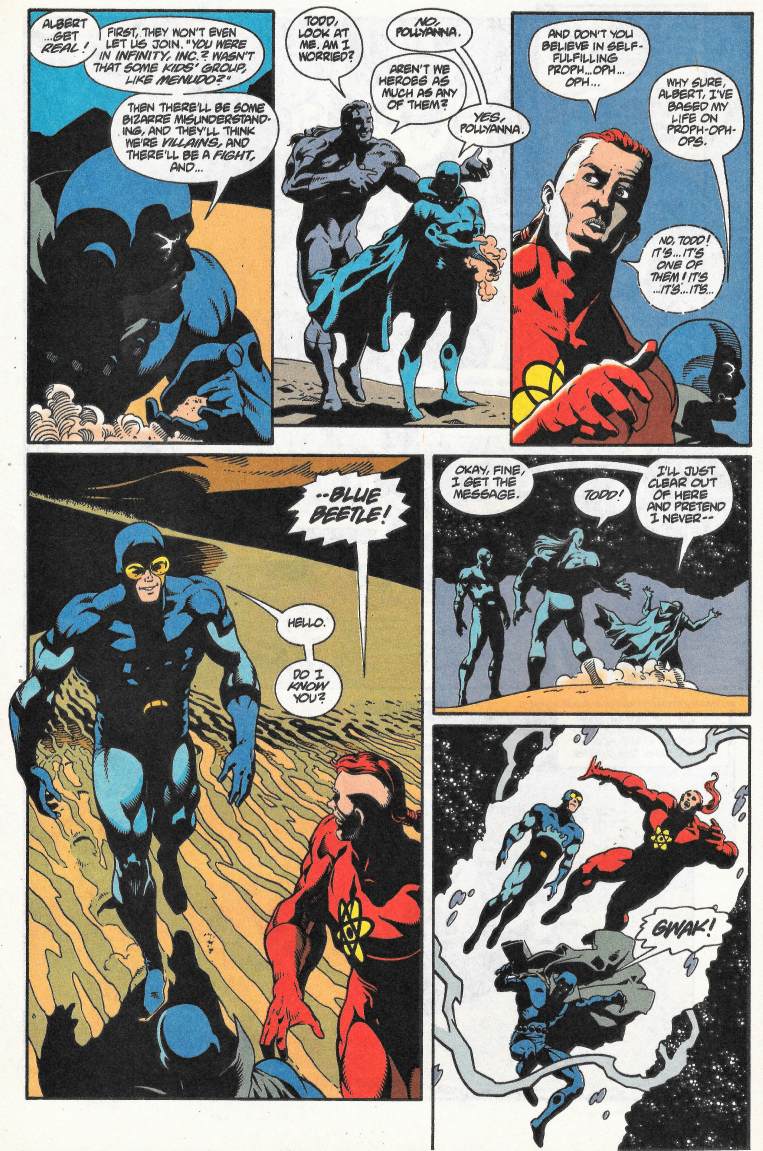 And then some sanity happens, as Blue Beetle comes walking out of the sands. He was chairman for a time and Ted Kord is not only a great detective and inventor, but also a surprisingly good strategist. Up the three of them get yanked. (And before Obsidian can talk himself out of going at all.)

As above, we find out that Metamorpho wants to join because he’s too ugly to fit in anywhere else. Not the best of rationales, but Rex has always been a bit of a loner without a home. What Rex hasn’t been is crazy, which is how he looks by the end of this sequence where he vows to himself to help Crimson Fox find her sister. 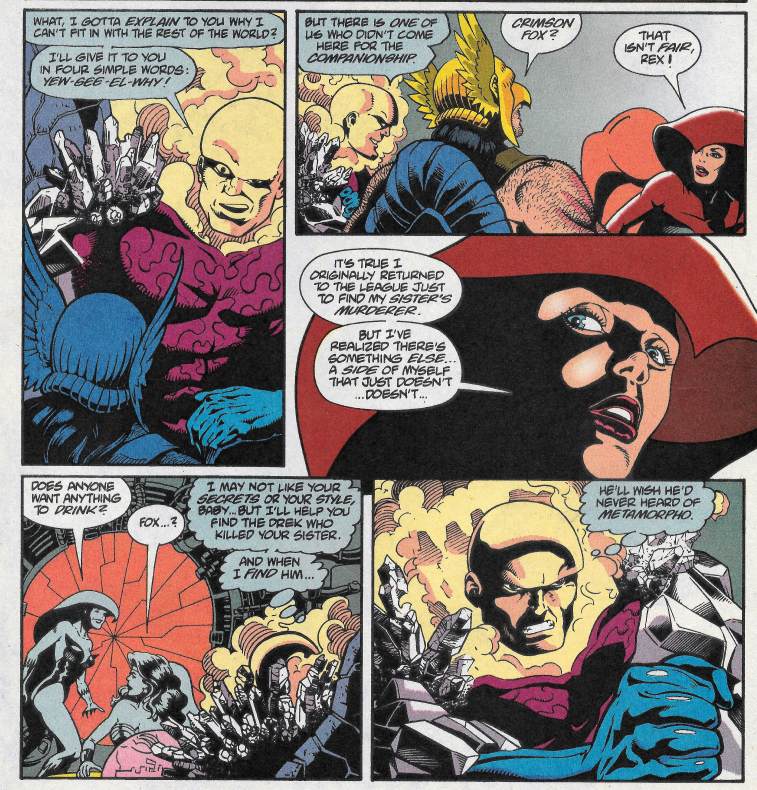 And for Crimson Fox? Like Flash earlier I find a reason for hating the book with a hallmark of Jones’ writing style. The pregnant pause on a thought that the character never finishes in hopes the audience will think is deep and mysterious. It is a bad literary technique for drawing someone in, to pretend the character has a big secret that they dare not speak of or even think about. It’s frustrating to watch.

But again, we have no leaders here, as presented.

Our three new arrivals make their way to the conference room. Beetle strangely appears to not recognize the place. This being after a prior panel had Diana state that Ted trained her on all the equipment on the pod. Obsidian makes fun of Wonder Woman’s signs and then nearly releases a hideous alien. The bit of humor works, which is all the more sad as it gives us hope the book might get better. 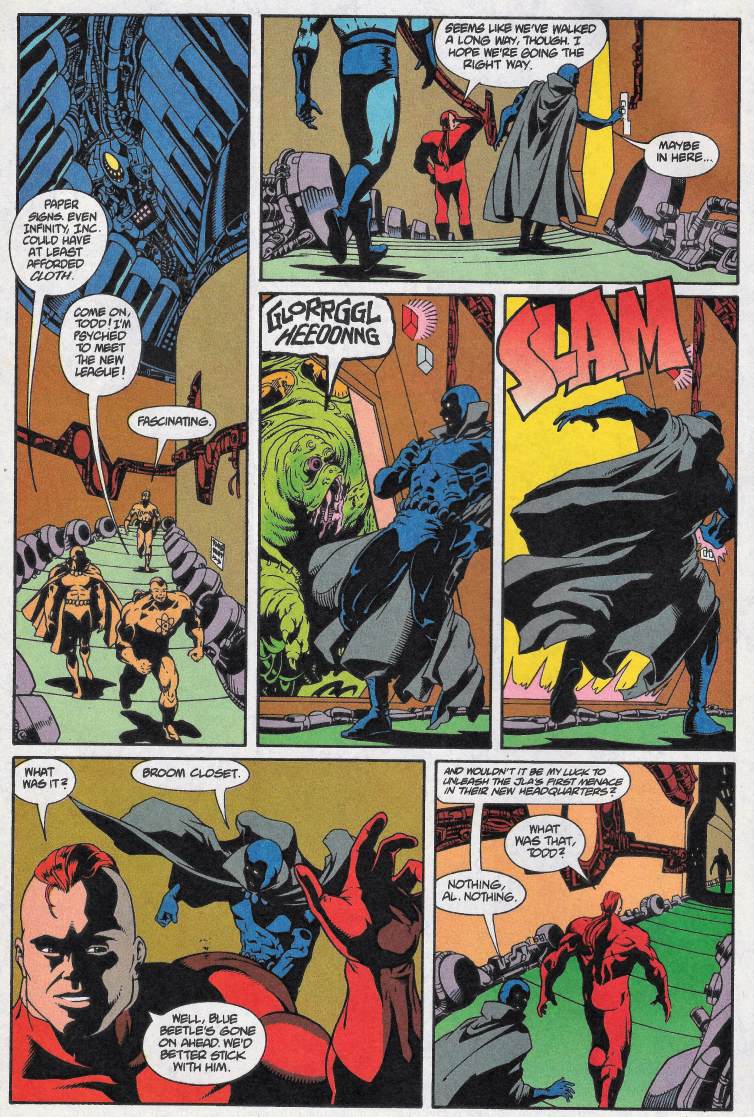 But it also reminds us that Wonder Woman knows these creatures are trapped here and three issues later no one had done ANYTHING to find them a proper home. That should have been something on Diana’s very matronly mind even before paper signs and “club houses.” This book is really horrible with Diana’s character. I’m beginning to long for the JLE days when she was on the roster but never showed up just so she wouldn't be shown out of character.

Beetle comes in and everyone notices something is “off” with him. 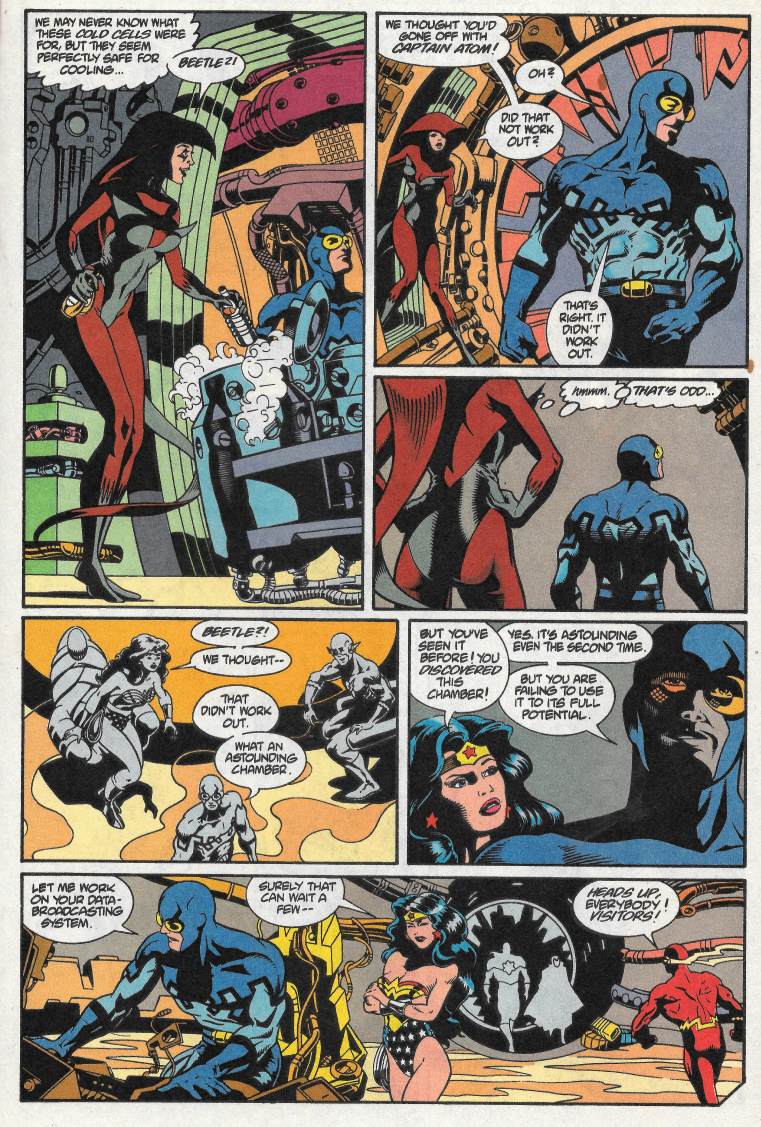 Especially when Crimson Fox tries to put the pheromone whammy on him and he doesn’t react. That’s when things go bad… 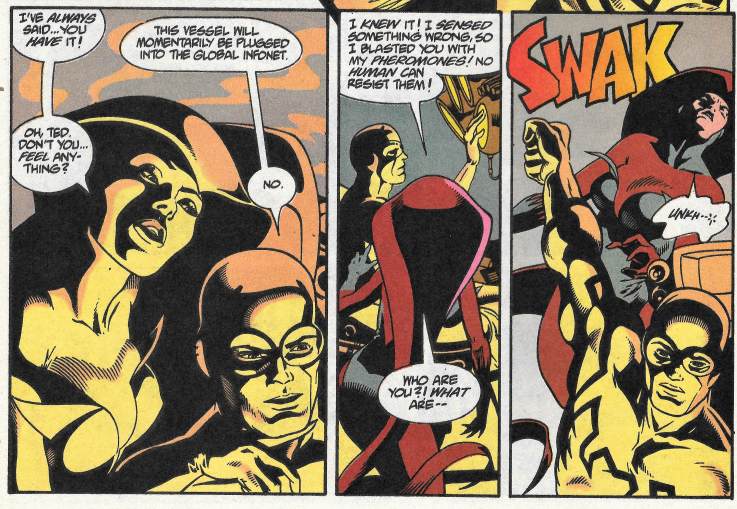 …the silly putty metal “Ted-bot” starts tearing through everyone… 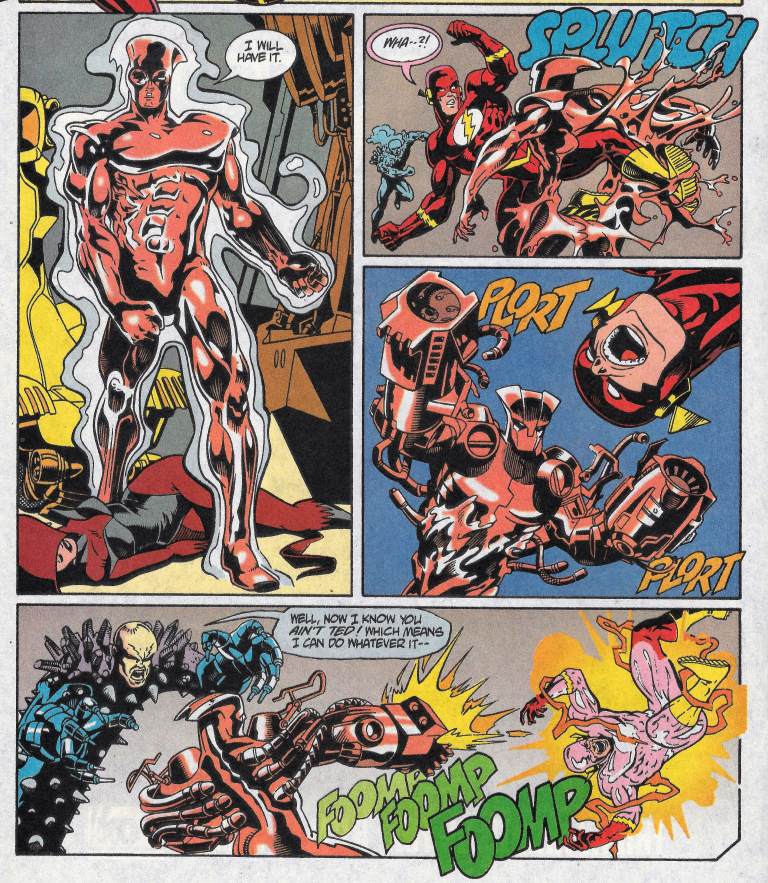 …with a splutch and a plort-plort and a foomp-foomp-foomp. Metamorpho gets disrupted from a blast of the machine’s face… 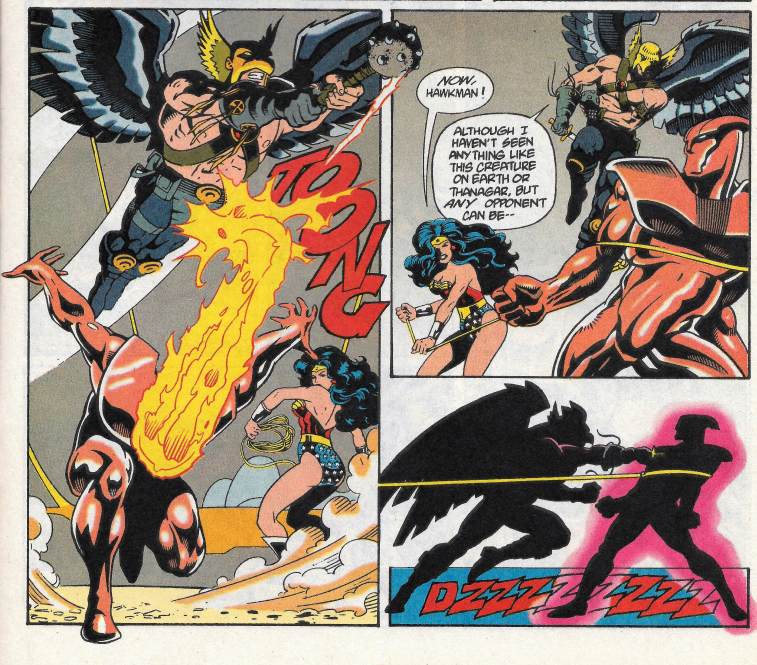 …Hawkman and Diana get zapped by something the machine calls “simple heat conduction,” which wouldn’t cause either of these characters to stop charging it. Fire gets coated and extinguished, leaving us left with Al and Todd… 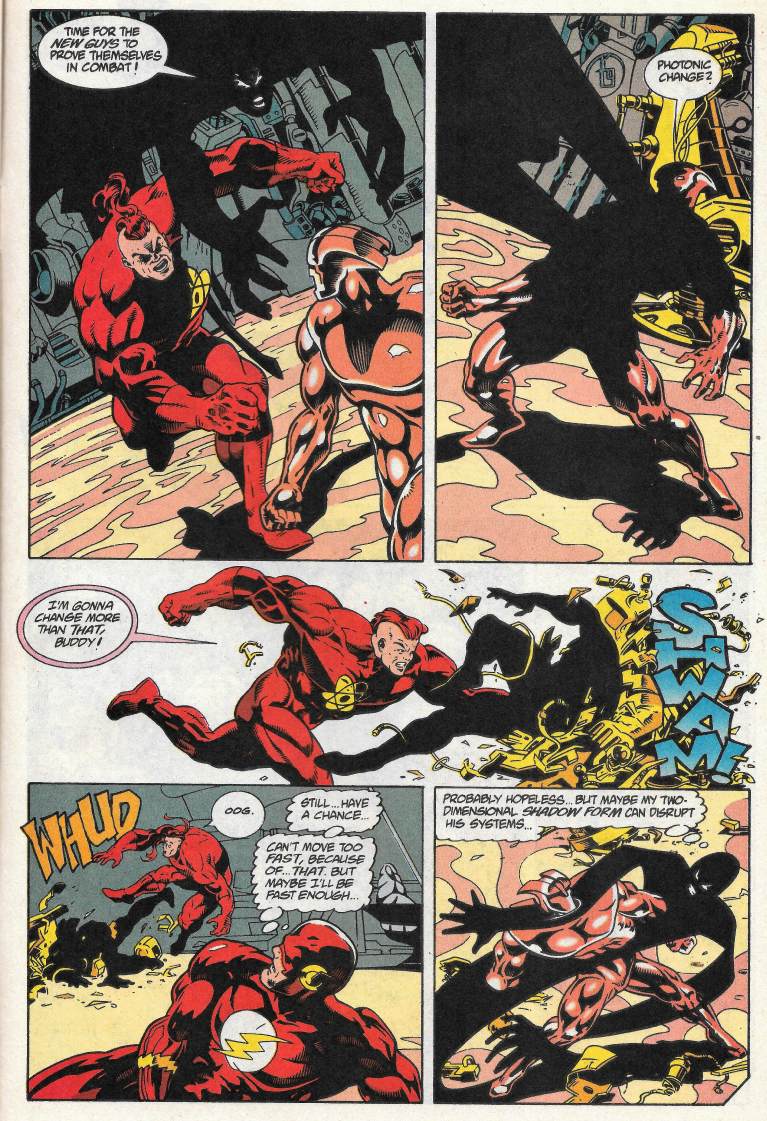 … Who, like everyone else, appear to be doing good up until the thing has their number pegged… 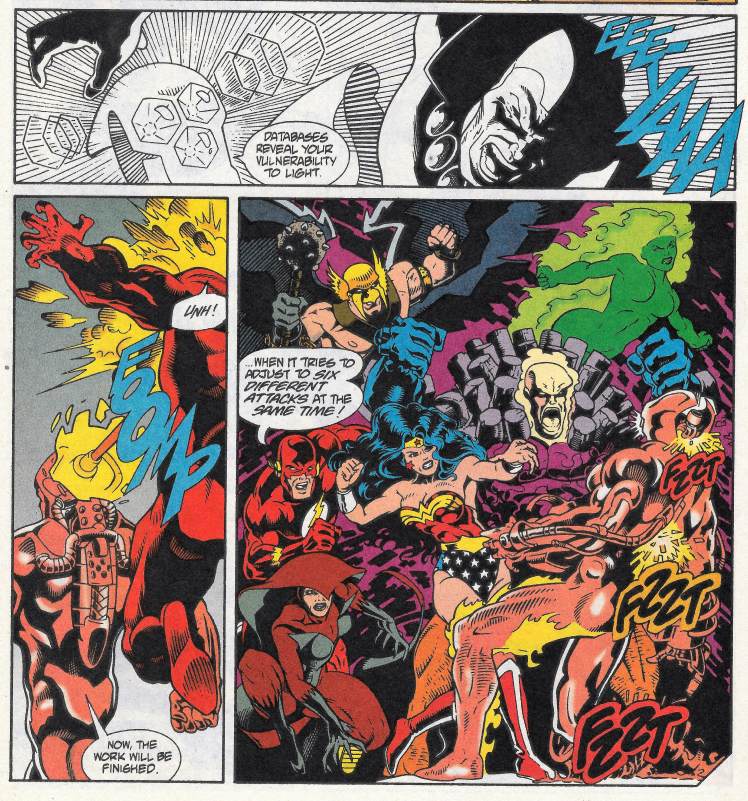 …which knocks them both out, but allows the other Leaguers to wake up and “angry stare” the robot until it “fzzt” out.

Notice what’s missing between those two panels? -- The way the combined JLA does whatever it is that defeats the foe. Audiences like to see that. it doesn’t help if you have a villain that is knocking our heroes around and then they all get up and stare at it in one panel without any actual “attacking” going on…and then you show the villain is defeated.

There’s a bit of climax that we like to see and understand the inner workings of. This story doesn’t have that. They literally look angry at the monster and it dies.

There’s a page of speculation about the thing and its motivations that goes on and on so long that Bea starts macking on Nuklon in her mind. Obsidian says something that is highly unlikely to happen, as the only character I would trust to lead this league (given that Wonder Woman isn’t actually herself) has just turned out to be a killer robot. 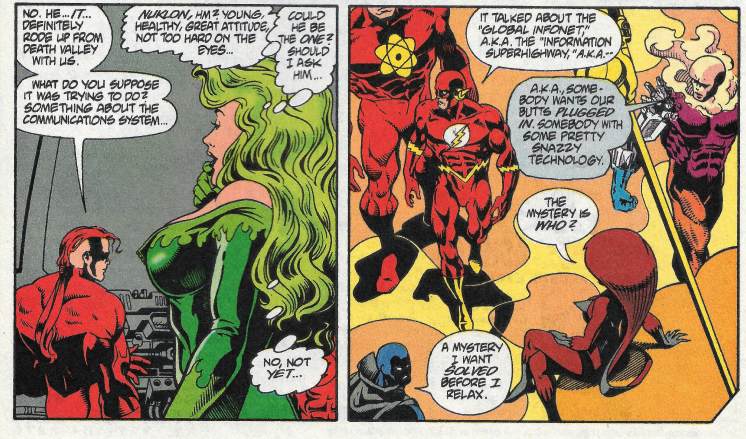 And then everyone smiles for a group shot, only half of them not looking like creepy child molesters (jeezey! Check out Al!) 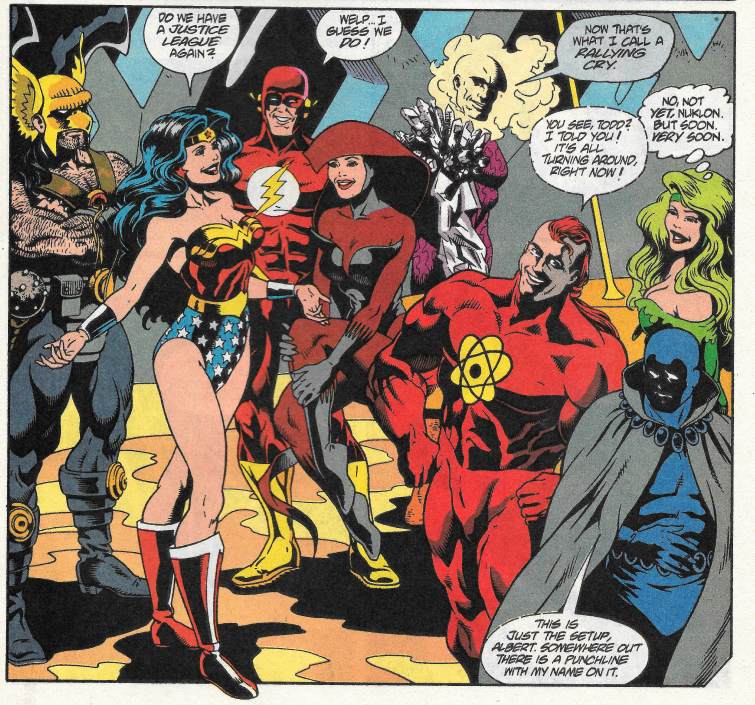 Fade out on people looking up hopefully… 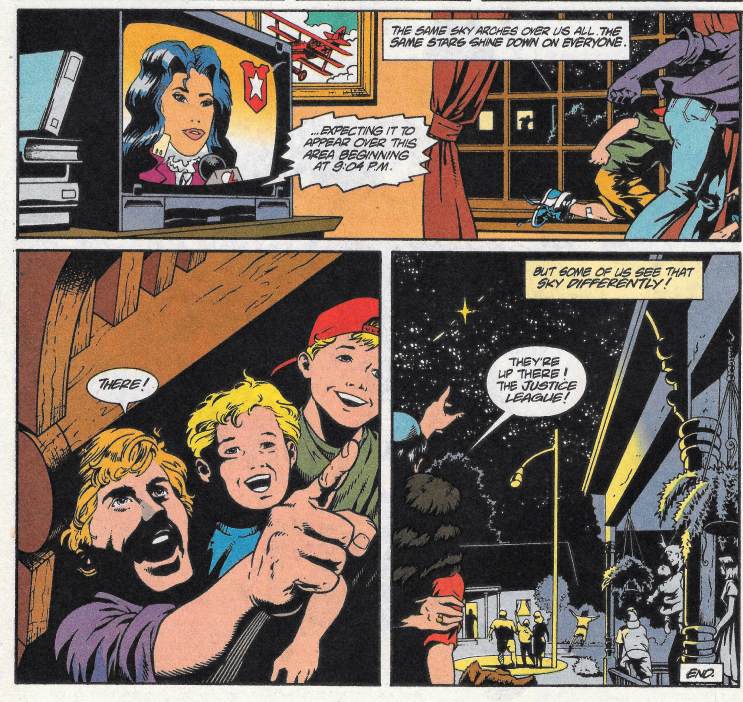 And then 20 issues later we consign these years to the dustbin of league history. Thankfully.

I can see some glimmers of hope in this, but by the same hindsight 20/20, I can also see the things that would make this league reviled.
Posted by SonOfCthulhu at 2:09 AM