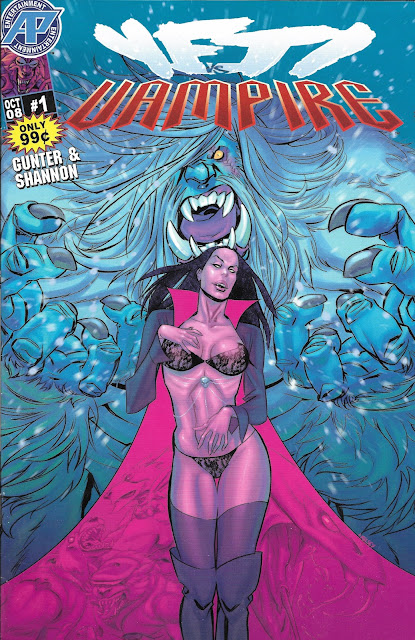 It had the virtue of having never been tried before.

I’ve heard that saying, but never really understood the lengths that it might actually encompass. Well, now I do.

Yeti vs. Vampire pits two iconic monsters against one another in a battle that literally two people were asking for. As a result of the tremendously huge target market for said book, it folded by issue number 2. At least I assume that much, as there is no way that wrapped up in two issues.

I had to look at press releases for this to find out “What this book is about.” Aside from LOTS of action, there is a plot, but you won’t find a hint of it in this brightly-colored volume. That plot is thusly: A fashion designer vampire wants the pelt of a yeti to use in her line of winter coats.

You are like a million steps up on me now, as the book starts and ends with tons of battle action. In a CBR.com interview at the time, writer Miles Gunter said the idea was to get exponentially more intense with each issue. By the final issue he said it would be “totally fucking balls-out.”

That final issue occurred in issue 2, quite possibly as sales of the first issue at 99 cents plummeted when the sticker shock of a full-priced $2.99 second issue hit the stands. I mean, there isn’t enough story here for a five-minute read-through. If subsequent issues were even more action-heavy, we’d be talking about a book with a total of ten-or-so word balloons.

By Gunter’s own admission, even the executives at Antarctic Press didn’t think highly of the title but the art drew them in. Gunter called the style of art “candy with razorblades inside.” I’d call in “neon induced migraine” as the insides look like a someone had a bad acid trip while at a rave. The color pallet screams out those extreme razorblades Gunter was speaking of.

And not always in a good way.

We begin with a team of explorers at a pole. Maybe. I don’t really know. The book seems to hate words so much that it doesn’t use them. There are word balloons on this page. It is an exception. 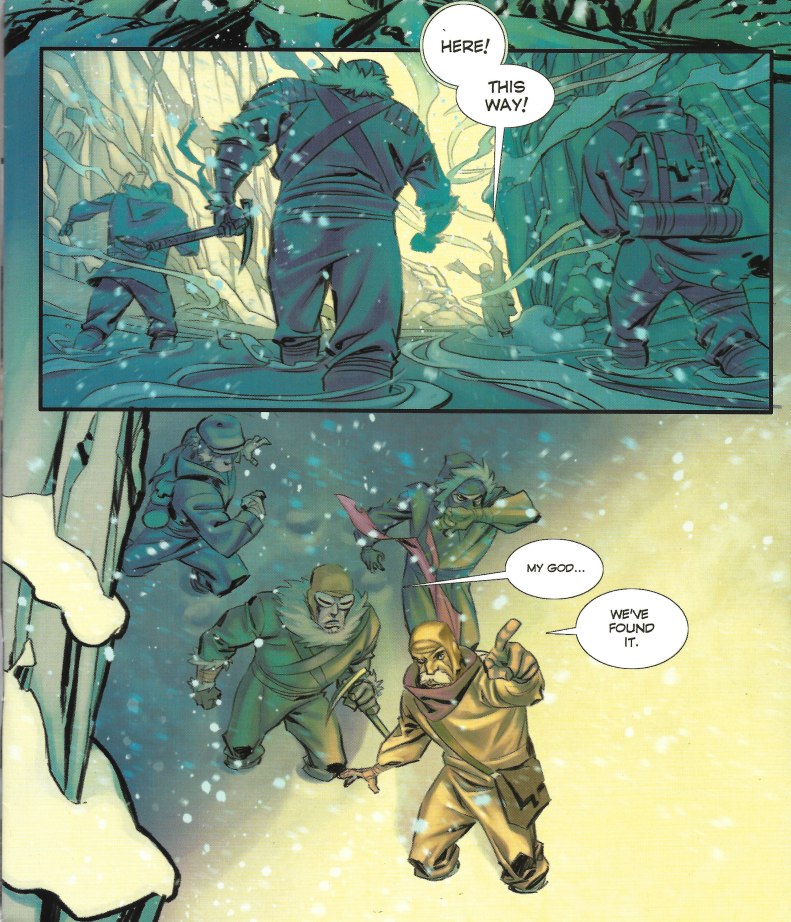 Anyway, they are someplace cold. And bright neon. What they’ve found is a passage into an ice cavern that is adorned with a line of fifteen feet tall statues. As soon as they get inside the cave… 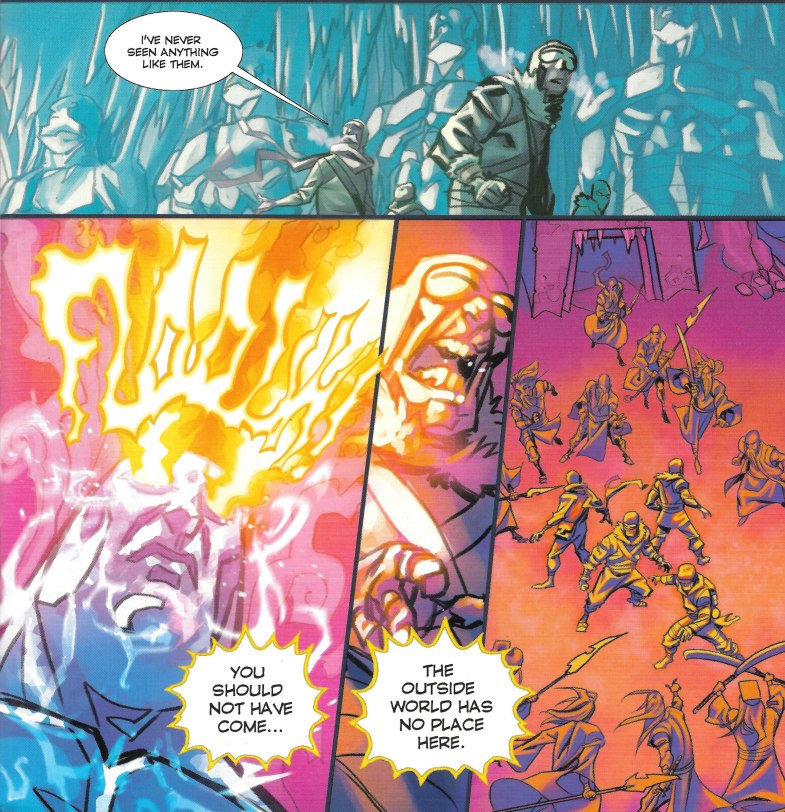 …the statues come to life as giant warriors. Also the pages literally catch fire in my hands as the artist decides to use EVERY hue available. One thing this book isn’t, is subtle. 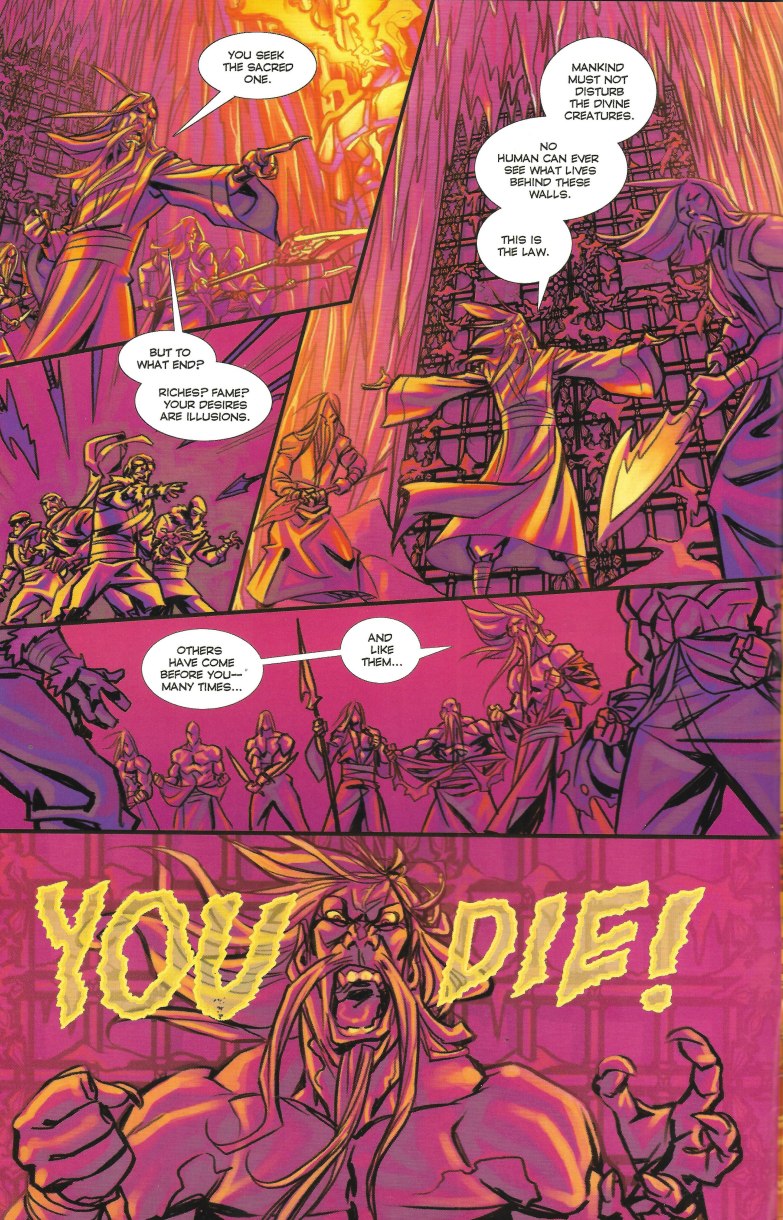 What also isn’t subtle is the sudden urge to borrow the colorist from My Little Pony. Oh, and the declaration that for trespassing these brave adventurers will be killed by the guardians of the “divine creatures” they protect. 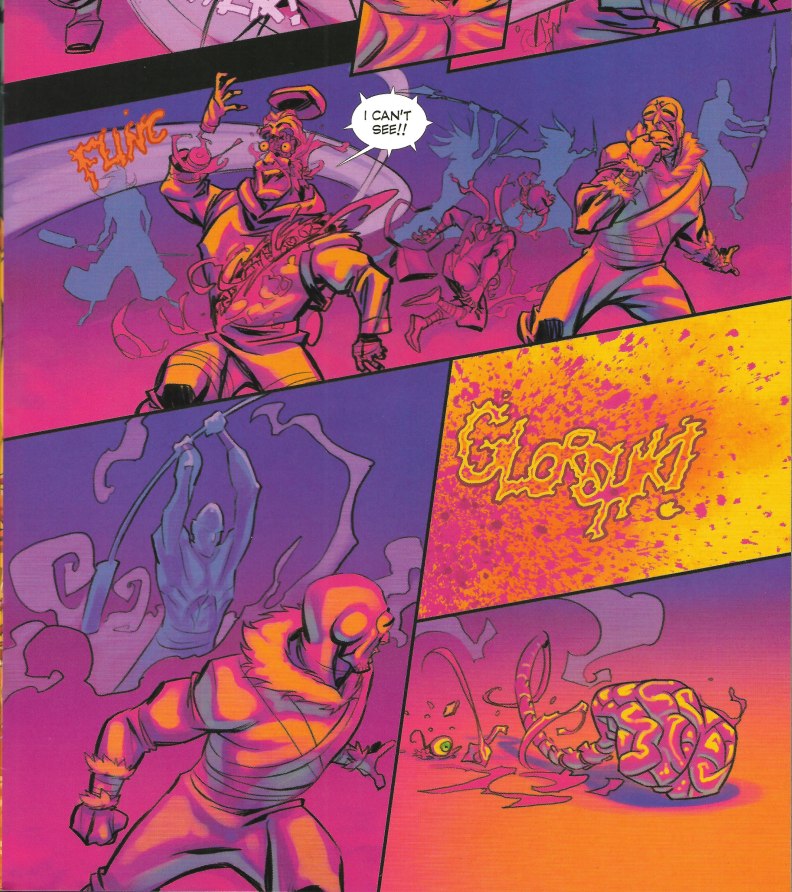 Which leads to lots and lots of red-hot death scenes done up like the inside of an Electronica nightclub. The end result appears to be ice-guardians 1, artic expedition 0… 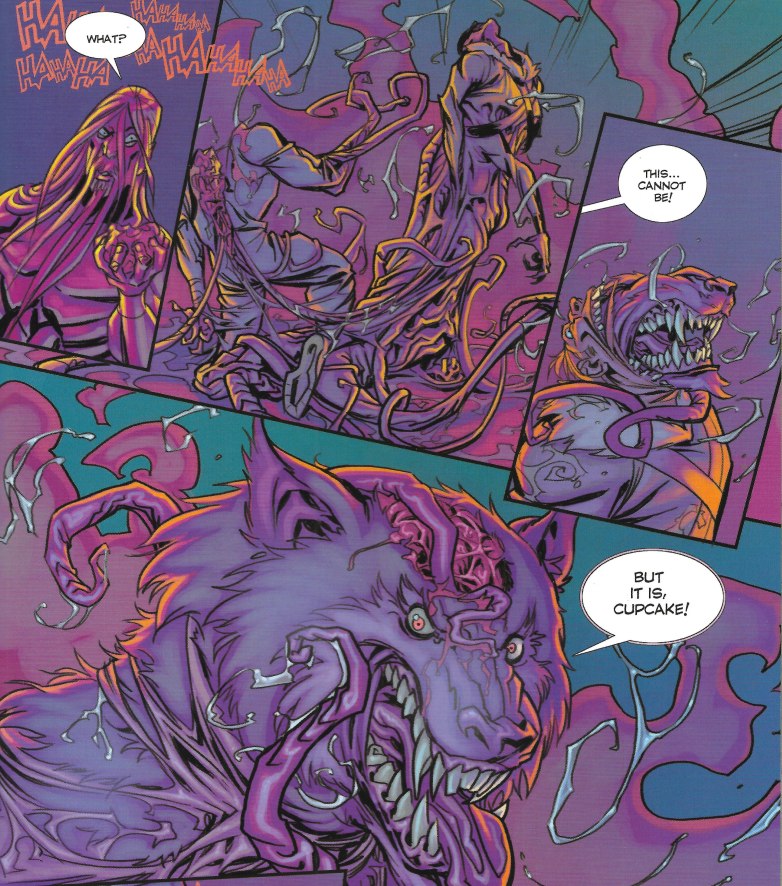 …when all of a sudden, the dead bodies reform into werewolves. Who then proceed to attack the guardians while spouting silly stuff like “that guy ate my brain” – “so grow a new one” and the joke below about someone’s head being chopped off “again” and set on fire. 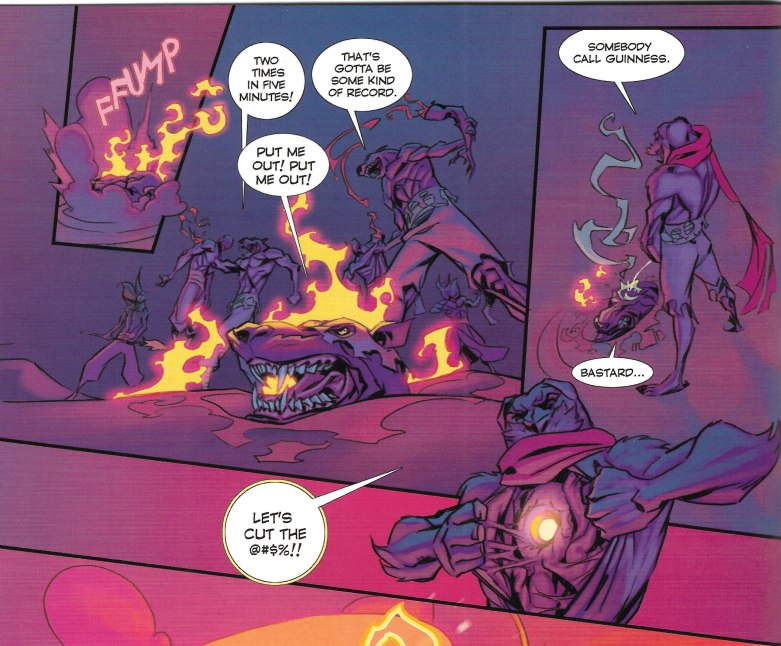 …and now peed on. It’s all rather droll. Then the werewolves unleash some kind of Iron Man type weapon and start vaporizing all the guardians, leaving just the standing. That brings in our unnamed vampire-fashion designer… 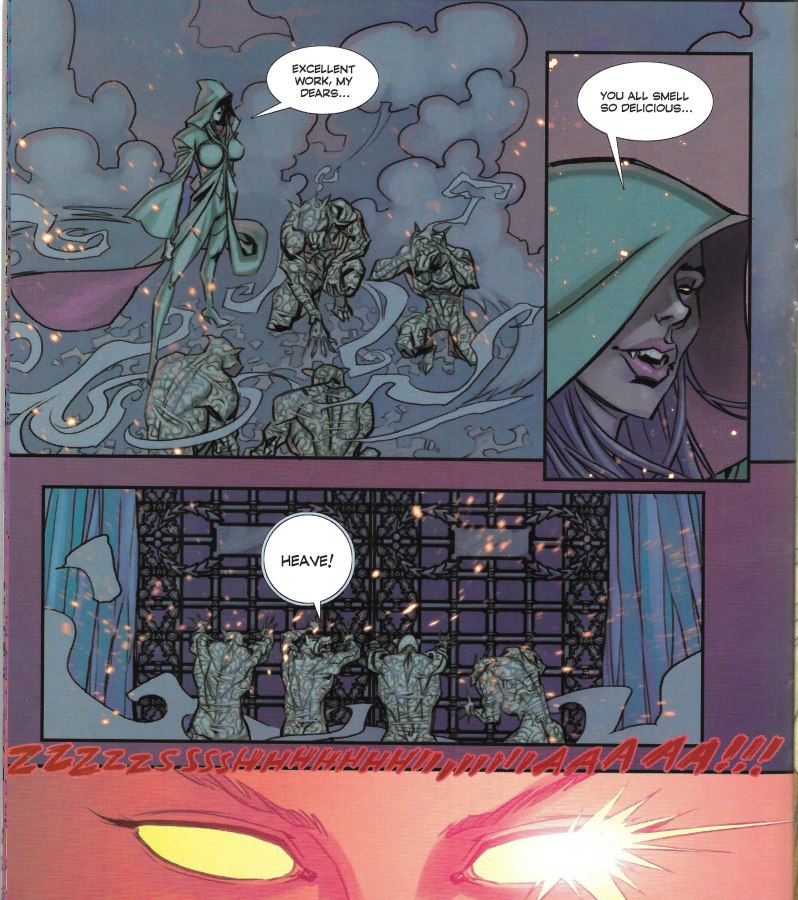 We get ZERO motivation for doing any of this in here, but they break into the Yeti’s sanctum. That turns out to be an idyllic Eden with its own miniature sun. It’s here that we find the Yeti’s two children playing in the garden. 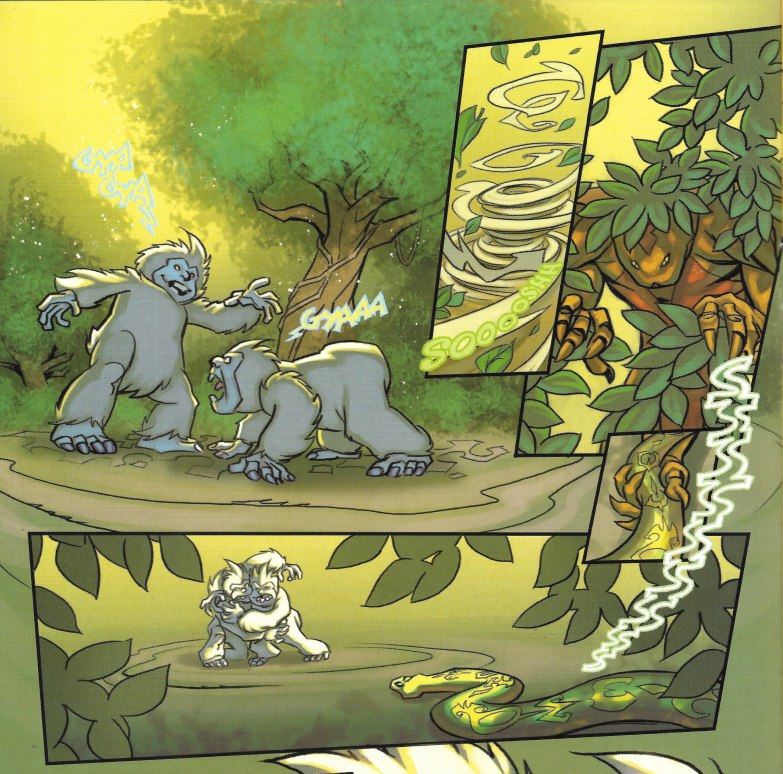 One is attacked by a three-eyed snake (why three eyes? Because two just isn’t extreme enough) released by this creeper behind the bush, which brings our titular character up to protect his/her kids. 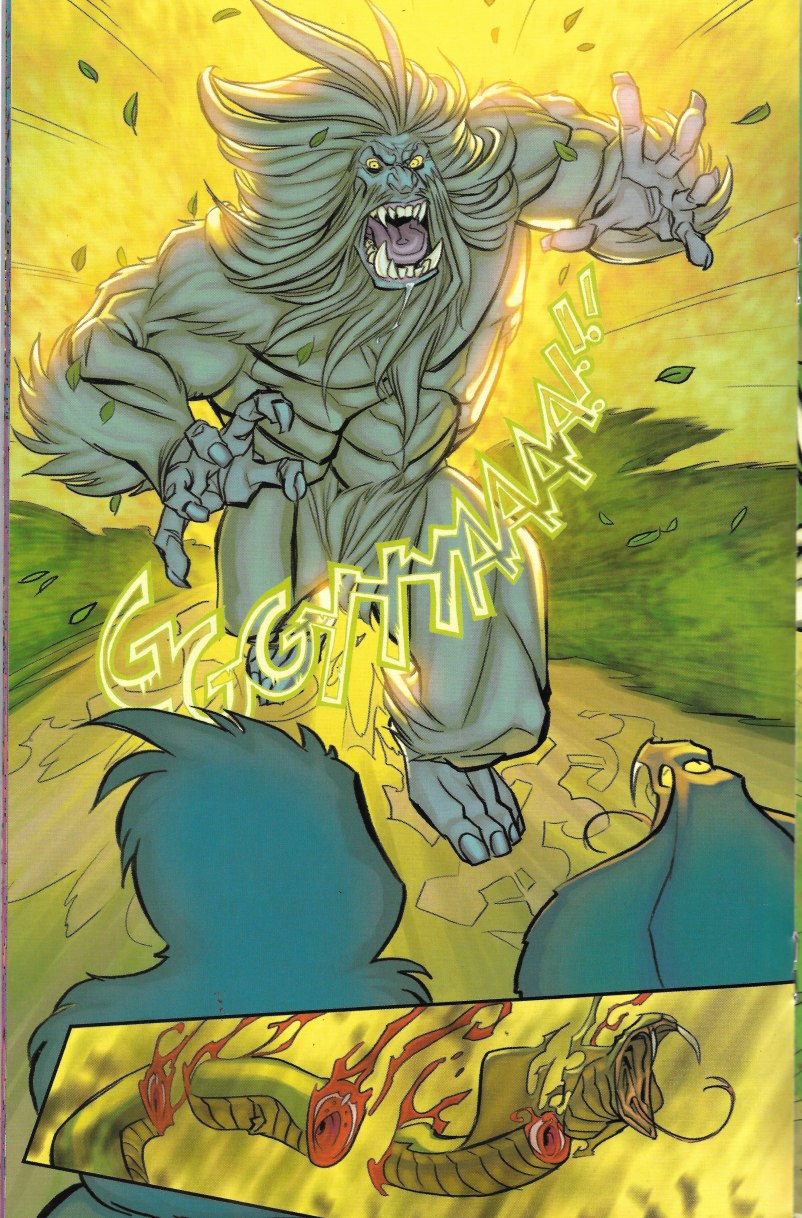 Yeti makes short work of it, turning it into snake sushi. He/she is then attacked by snake man… 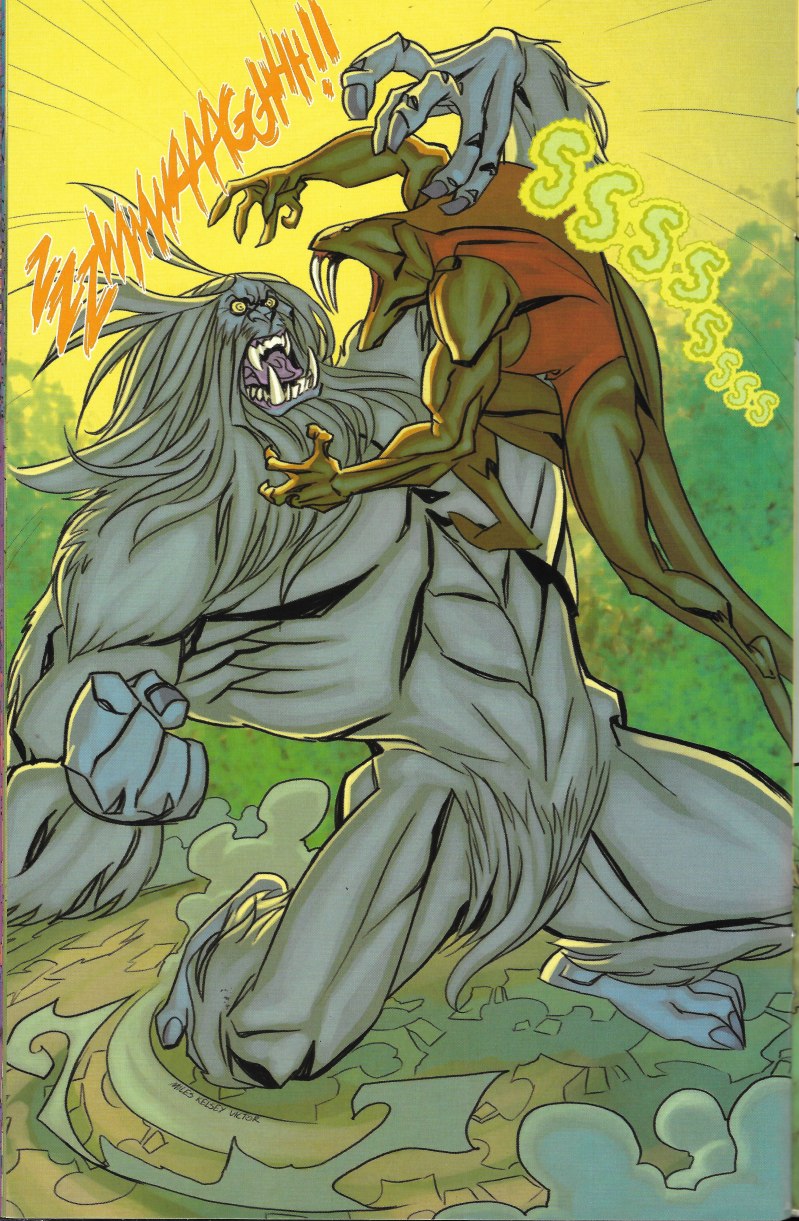 …and he’s pretty much defeated, until the werewolves distract Yeti, allowing snake-dude a clear shot at that furry back of his. While it may not work out well for the Yeti, it appears to go infinitely worse for snake man. 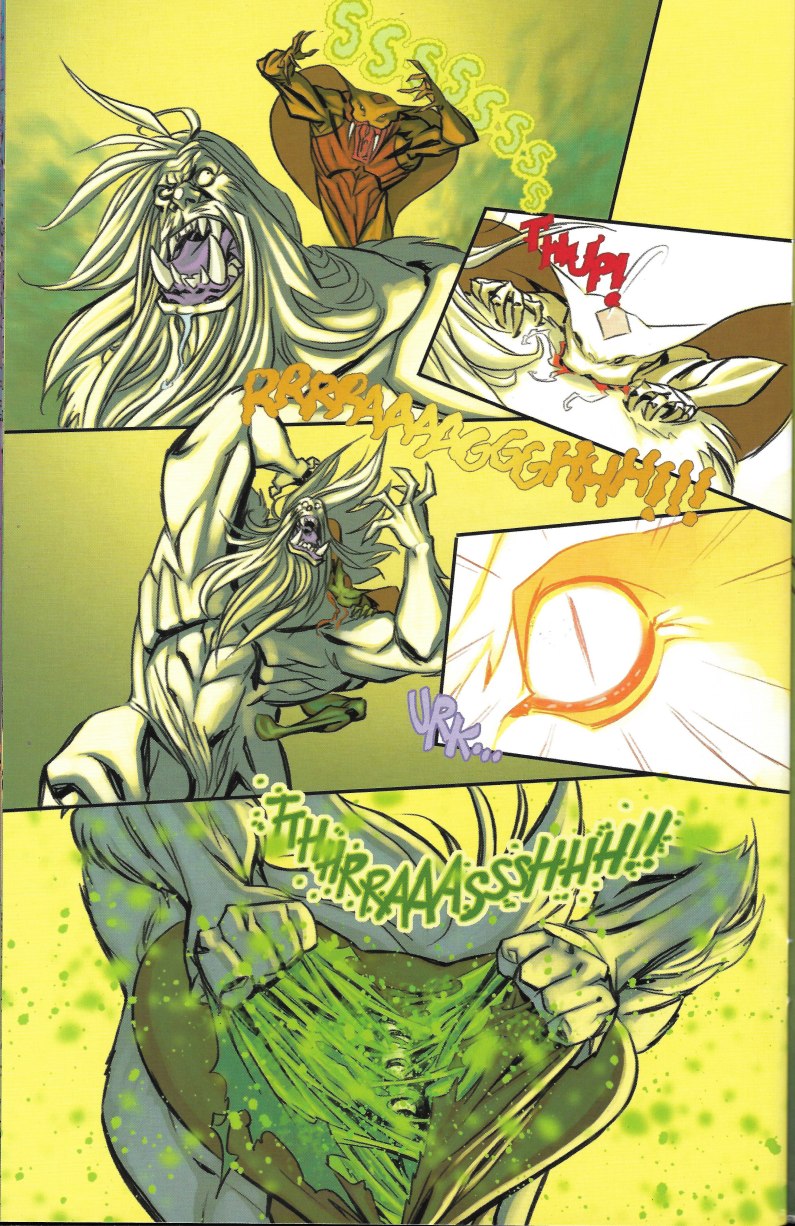 The Yeti collapses and the snake guy, who we learn was named Victor, crumbles to dust in the hands of the vampire lady. 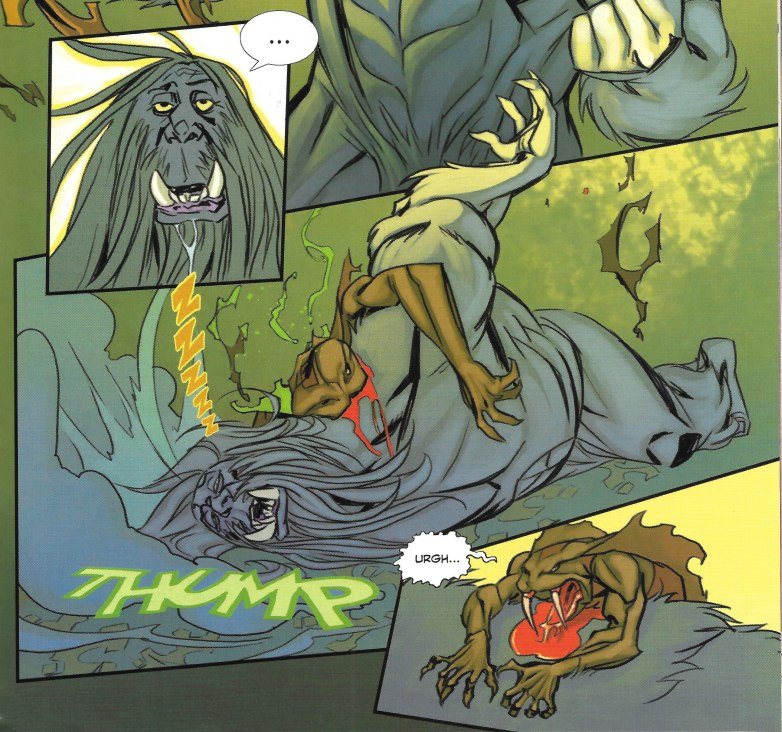 They pack him up in a giant cage and leave with him. 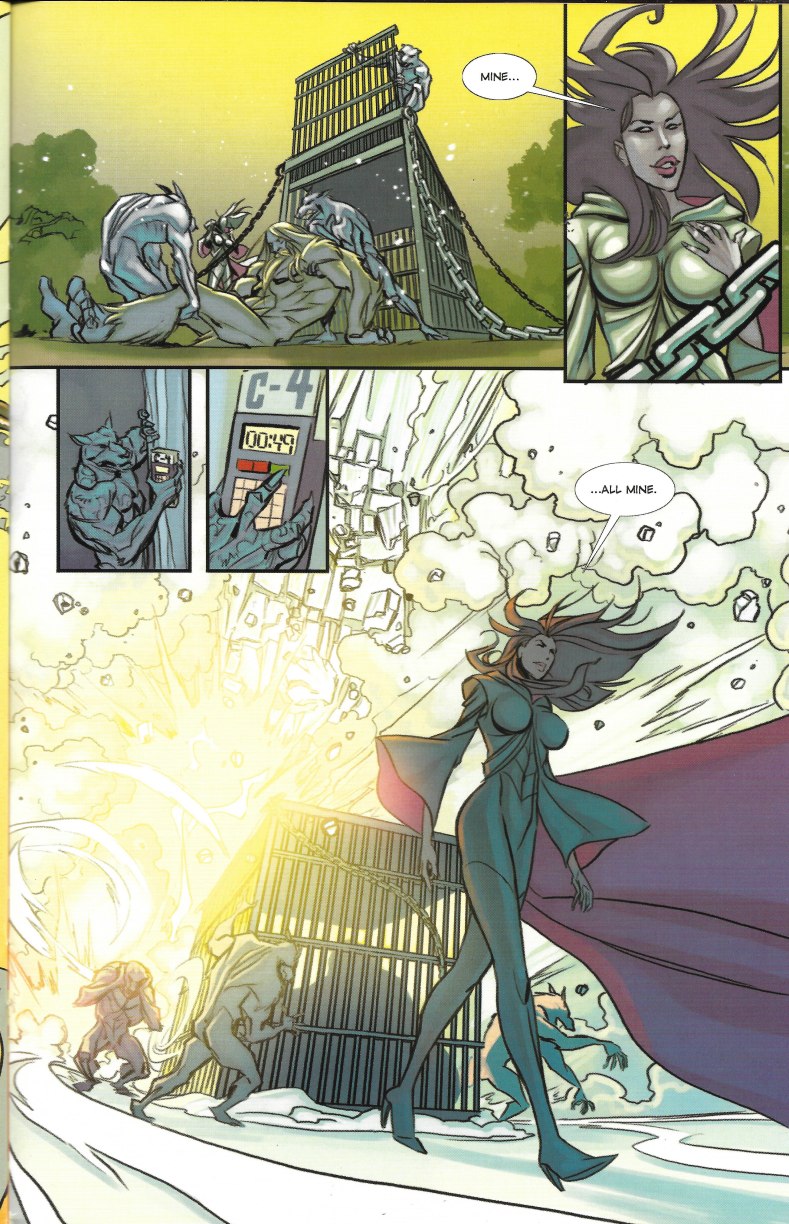 Now I’m not taken by this. If you like the bright ‘n snazzy art and the complete lack of more than five minutes of reading material, by my guest. For me the book is barely worth the quarter I paid for it let alone the 99 cent cover charge and HEAVENS, never the $2.99 charge the ongoing would have cost. I get why the series stopped at issue number two.

As for it making a comeback? I’ve Yeti to hear a peep about that.

Posted by SonOfCthulhu at 2:09 AM