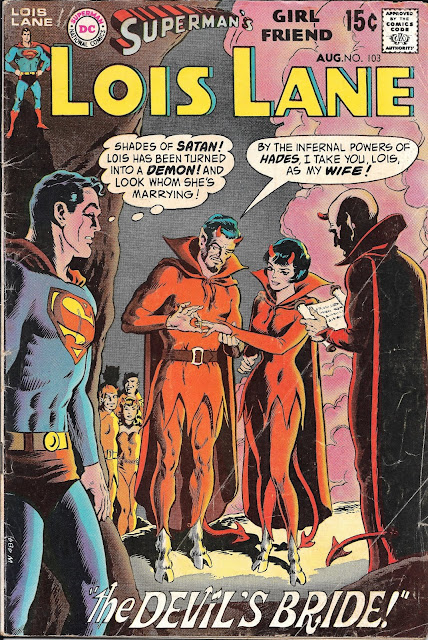 Here comes part 2 of a two-part tale that, like most Superman comics of this age, is not quite what the cover alludes to. The nice thing about the issue is that it reads like it is all in one issue, recapping Superman’s Girl Friend, Lois Lane #102 in a tight little bun before this issue starts. I won’t spoil the bait and switch here, just read along and enjoy it. 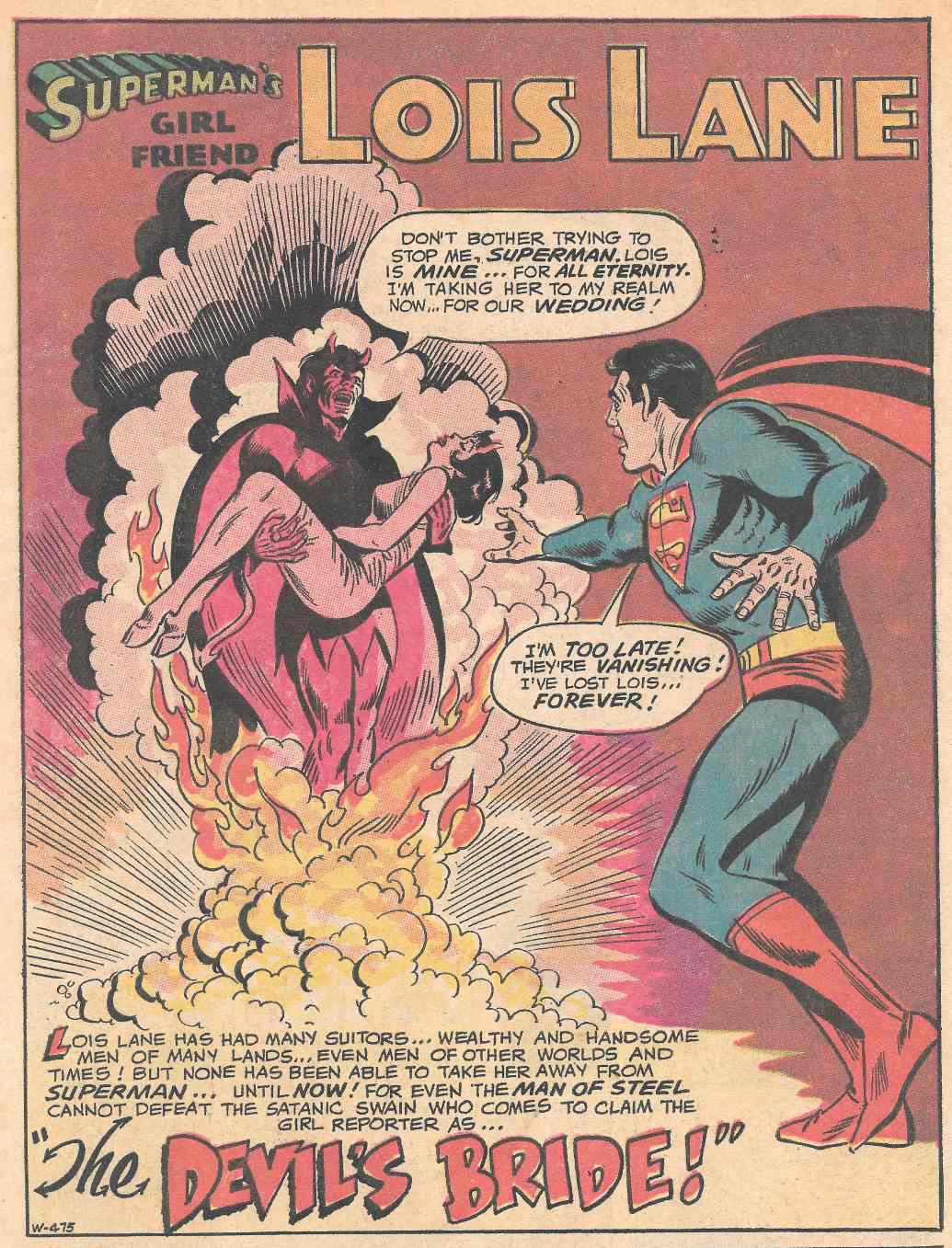 We begin with Superman feeling a bit down on himself for having killed Lois last issue. Wait! What???
Don’t feel lost, all WILL be explained. First off though we have to deal with some Super-Flagellating as the Man of Steel tries to punish himself and instead sets a forest on fire. 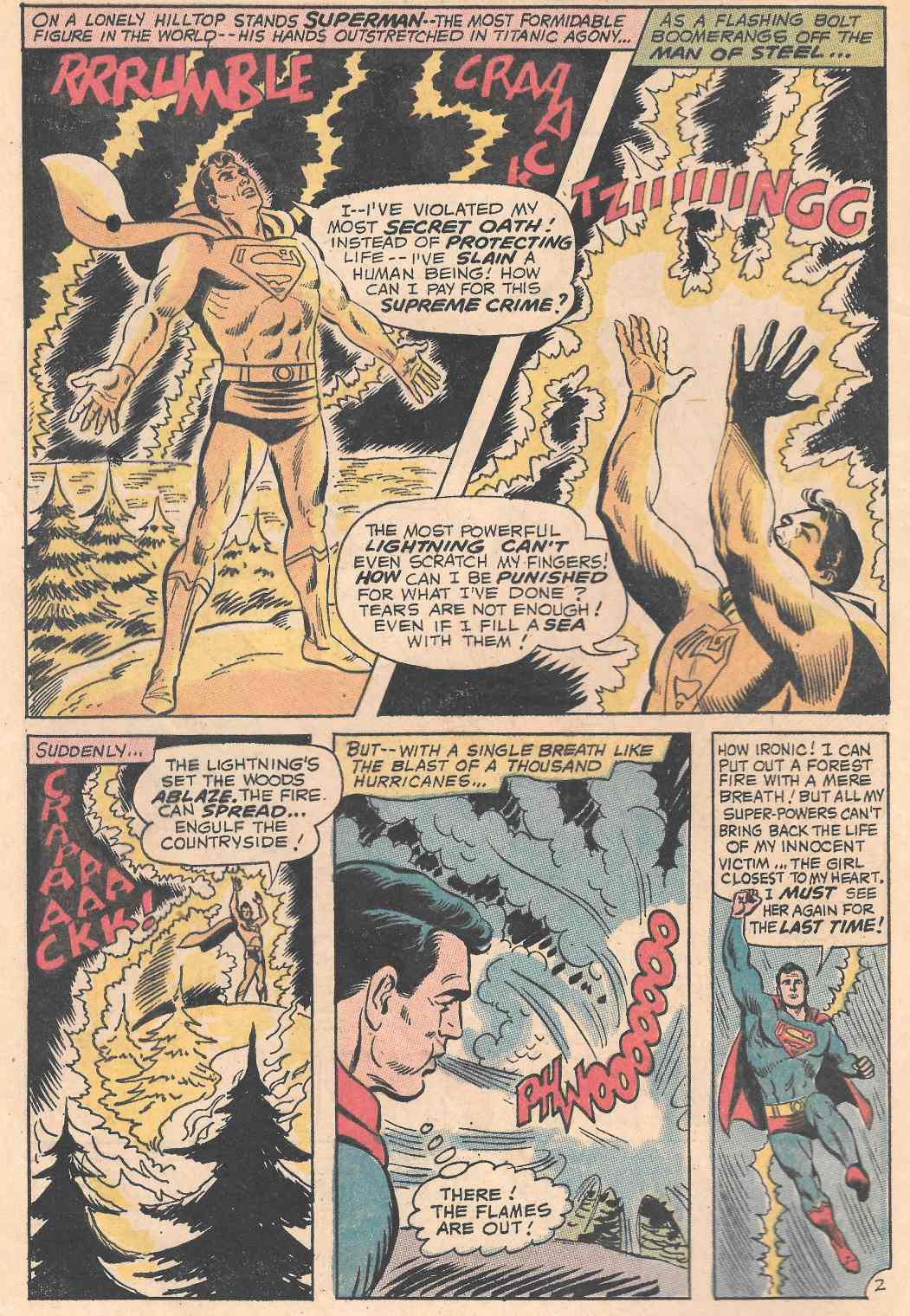 Done trying to punish himself, Supes heads back to Rajah Satdev’s estate where Lana is watching over Lois’ dead body. Again, all of this will be summed up. Soon. Superman puts a wedding ring on Lois’ dead finger and then uses the words “wilt thou” in a sentence. 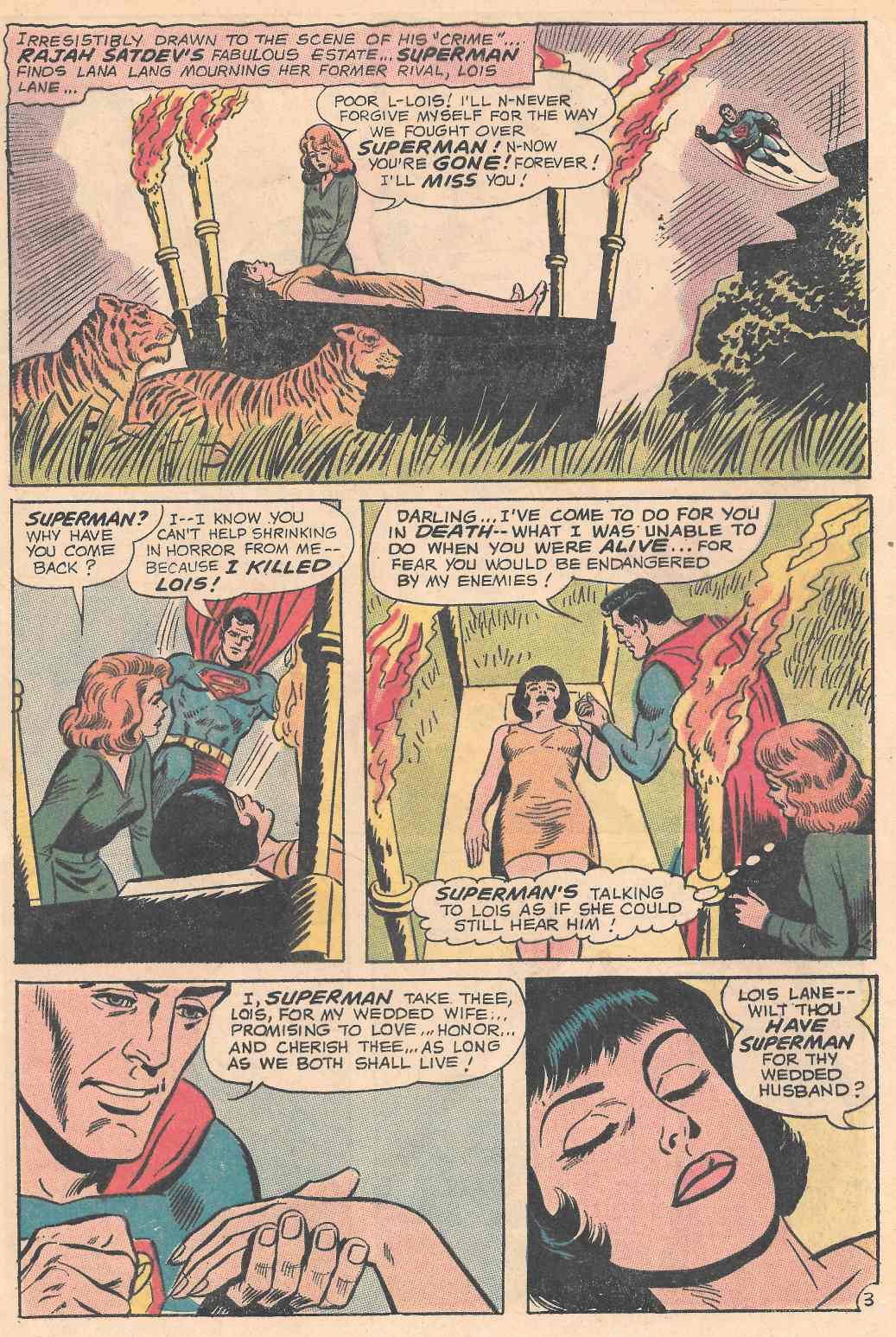 But there is no consent from a dead person, or at least that’s what my probation officer keeps telling me. Lana might be on to something. Superman is out of wits with guilt. That’s when the second suitor in this bizarre love triangle with a dead woman pops in…the Rajah Satdev. 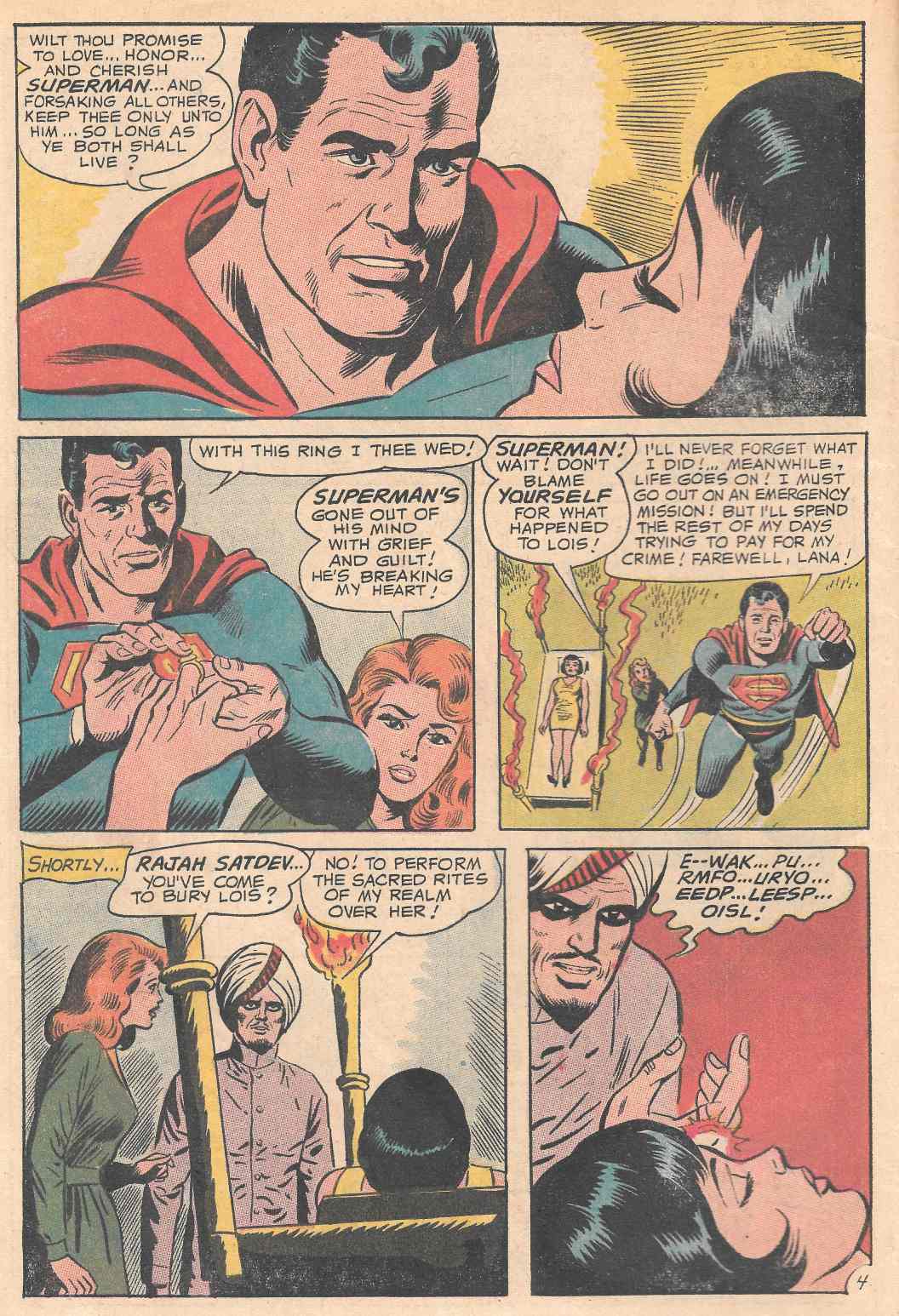 He uses the magic words that are JUST like Zatanna’s except for in pig-latin. Maybe the words are pig-magic?

Whatever they are, they awaken Lois from her slumber and make her rather horny. As in she grows devil horns on her head from the experience.
Lana asks what happened, as it appears she has only just arrived here at the start of this issue and Superman must have been tight-lipped about actually killing Lois. So here goes Lois recounting her assignment to cover Rajah Satdev’s animal menagerie. The Arab can tame tigers with just a look. And Lois makes a stunning pronouncement that she would sell her soul to the Devil to scoop Clark just once. Satdev’s reply is a little chilling… 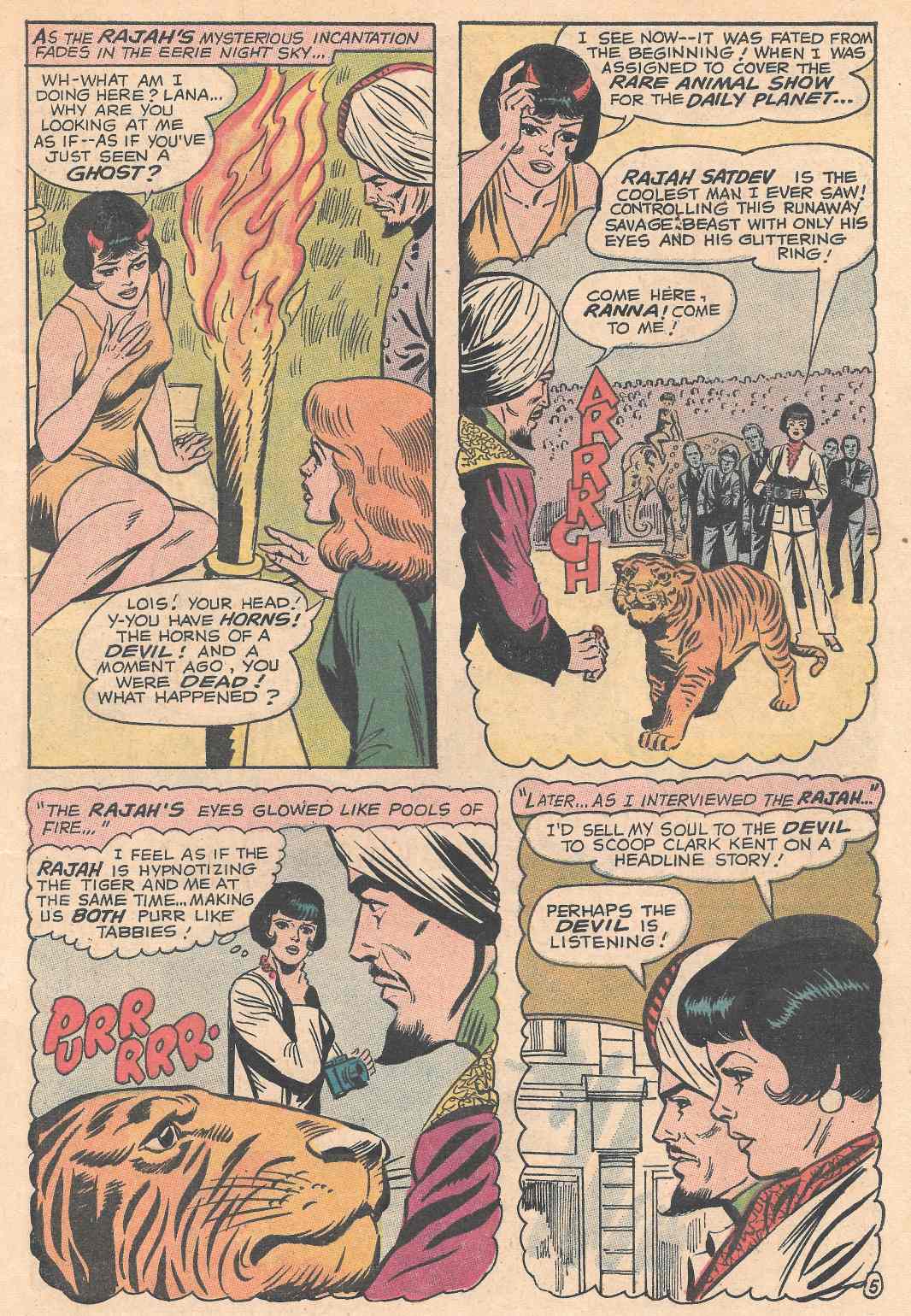 …as his ring glows and an unoccupied building blows up. I think that makes him a terrorist. The exposion does give Lois the opportunity to get the drop on Clark by catching Superman in the act of fixing the broken building. 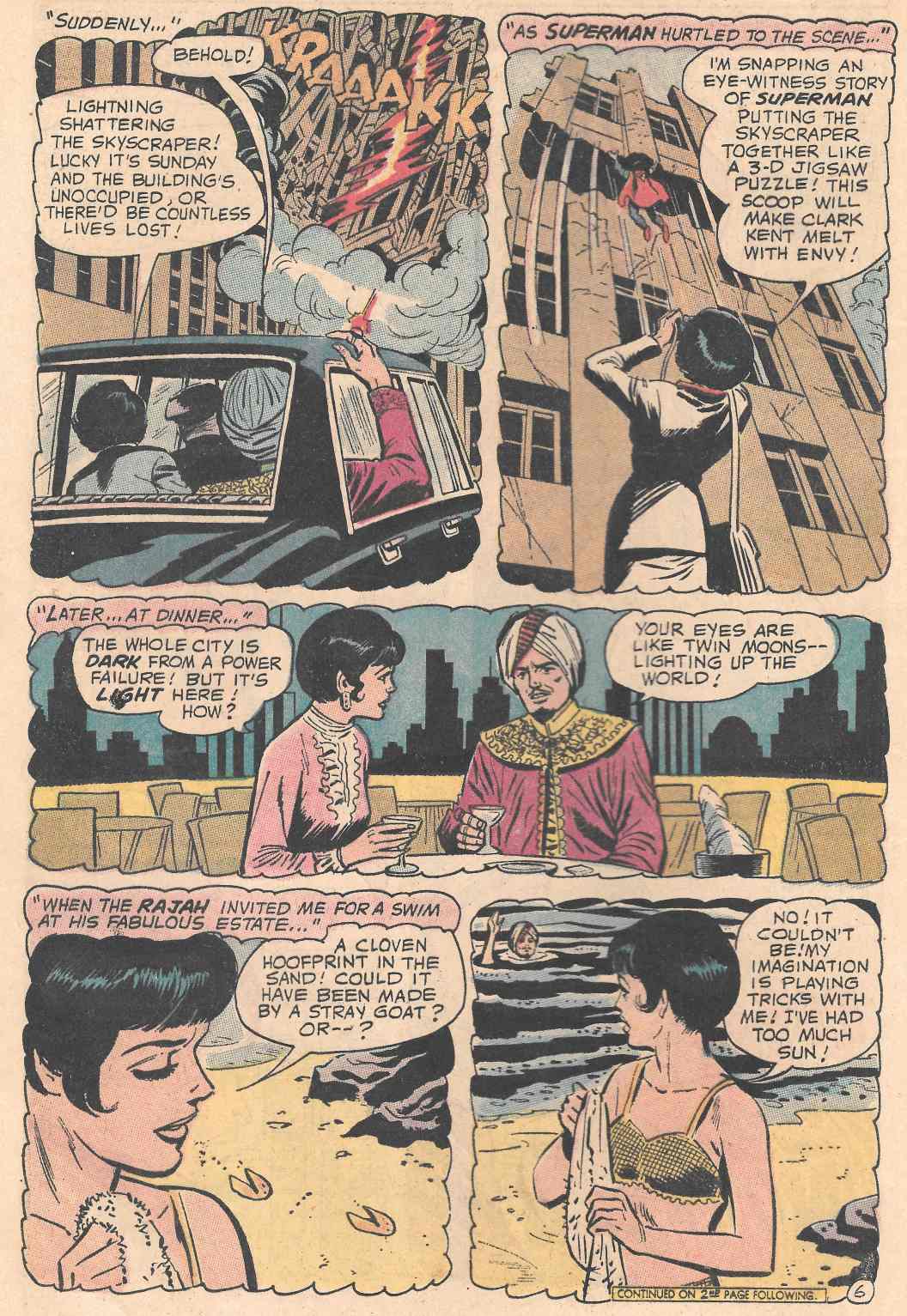 However, something is off with Satdev. He takes the two of them to the only restaurant with power while a citywide blackout occurs. Also, Lois notices that the appears to leave cloven hoof prints in the beach sand when they go swimming later.

Not to mention that he has a “secret elixir” that only he can drink…that is, if he is awake to stop the impetuous Lois, who steals a swig while he naps. All of which leads to her uncovering his secret: he is literally a devil in disguise. Not only that but devilhood appears to be catching as Lois sprouts a pair of horns just as Superman and Lana arrive. 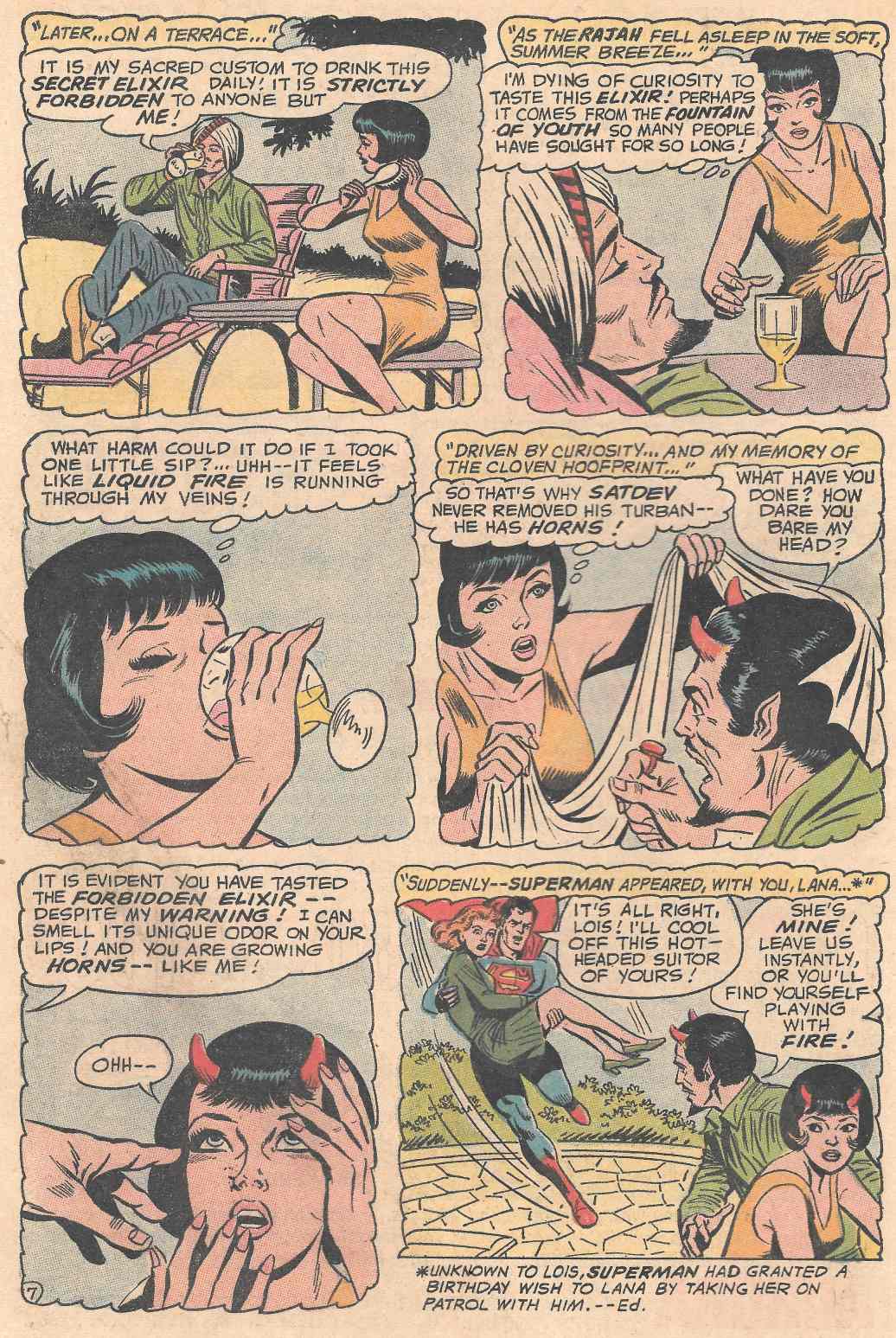 Superman tries to take Lois from Satdev, but he isn’t having it and their battle causes Lois some harm. She is knocked prone by the bolt ricochet but Satdev reawakens her while proclaiming that her life belongs to him now. His tigers tend to agree… 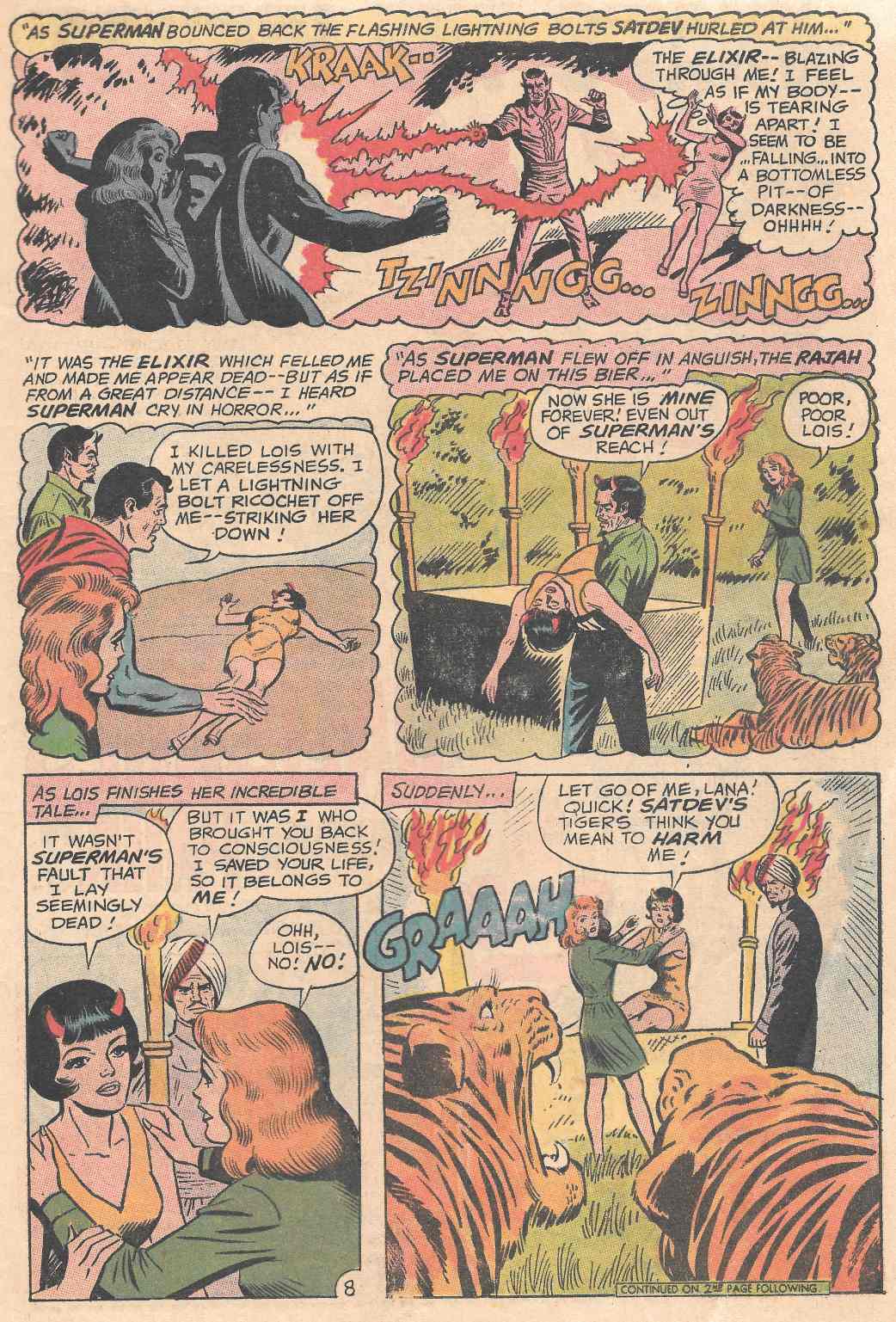 …which causes Lana to cause a huge fire in response. The flames scare off the tigers, but appear to have no effect on the devilish couple. 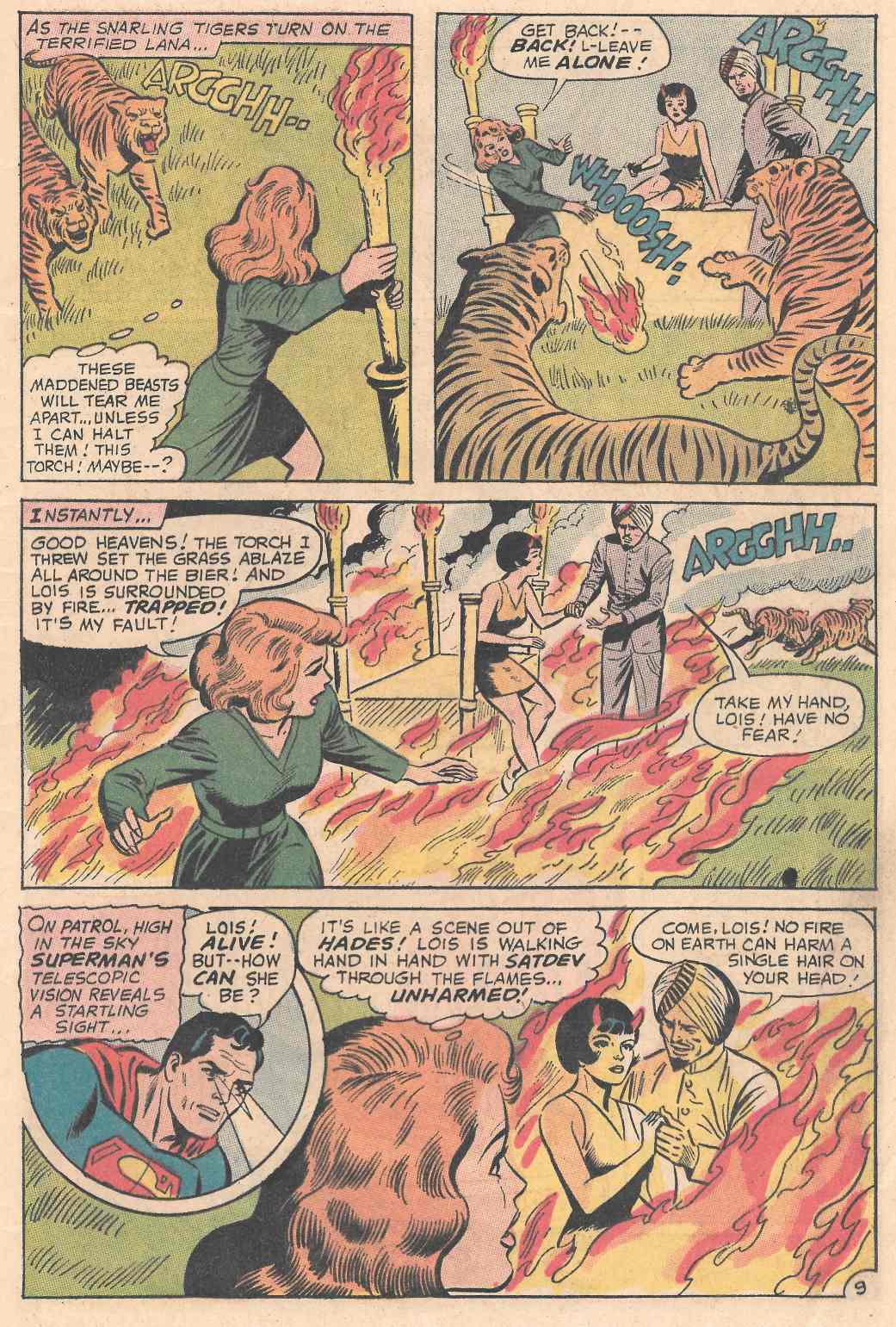 Locals are alerted but seeing Lois in the flames proclaim her to be a devil and run off. Which causes Lois to faint dead away, awakening only after a long journey has occurred. Satdev has brough her to his home. Only now she is fully transformed into a devilish aspect: horns, cloven hooves, AND a tail. 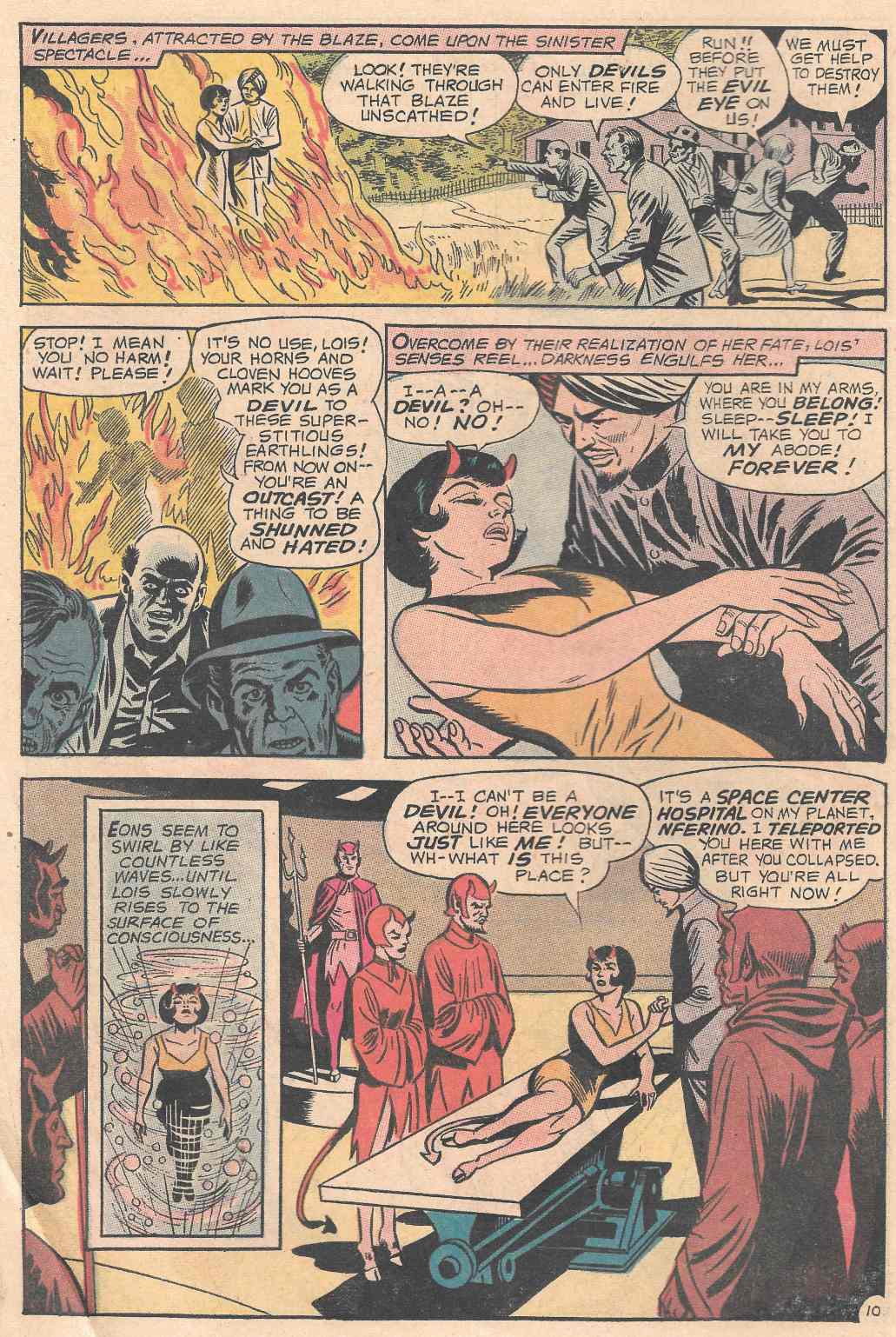 But wait! This is where the bait and switch occurs. Because, you see, Satdev ISN’T a devil. He’s an alien. An alien from the planet Nferino, where everyone looks like a devil. 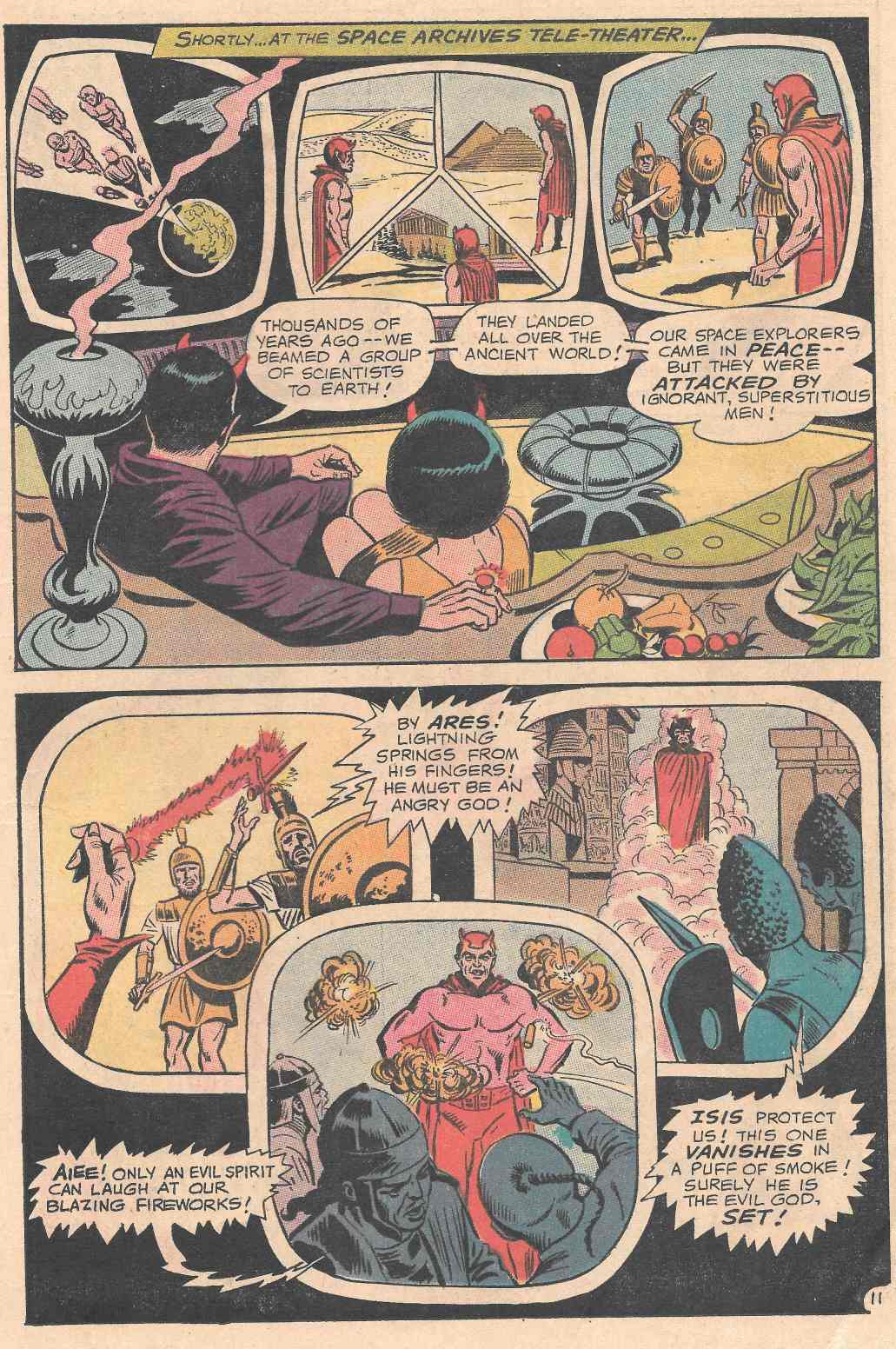 Or rather people believe Nferioians are devils because they have visited our planet in centuries past. While they came in peace, the humans attacked them leading to the Nferioians using their superior technology against us.

So really this story is really not about devils. It’s… 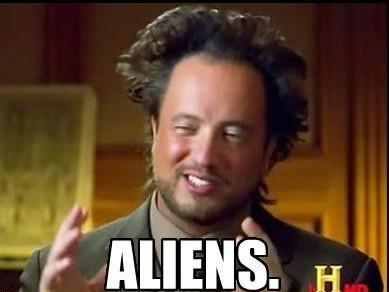 And as Lois watches, Satdev explains last issue from his point of view, clearing up all the inconsistences. 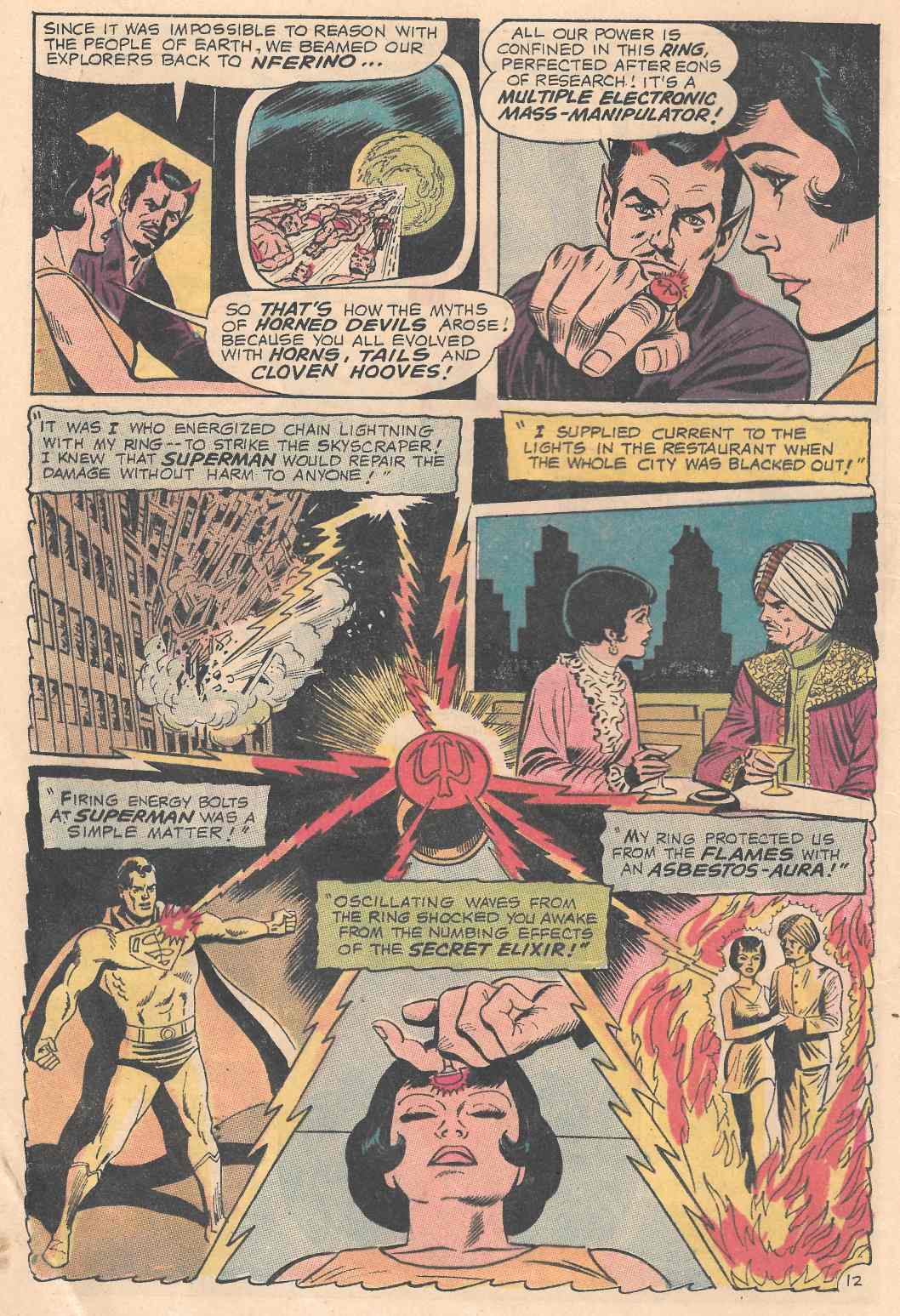 And while this explains most things, it doesn’t explain why Lois now looks like a devil. In fact, that is something that leaves Satdev confused. Nothing he can do will change her back. He gives Lois the choice of returning but explains that on Earth with her new appearance she would be shunned. Also he shows her that he’s kinda been alien creeping on her for some time. But while he isn’t a boy scout, he doesn’t appear to be a horrible choice of mates, so Lois decides to stay on Nferno with him. 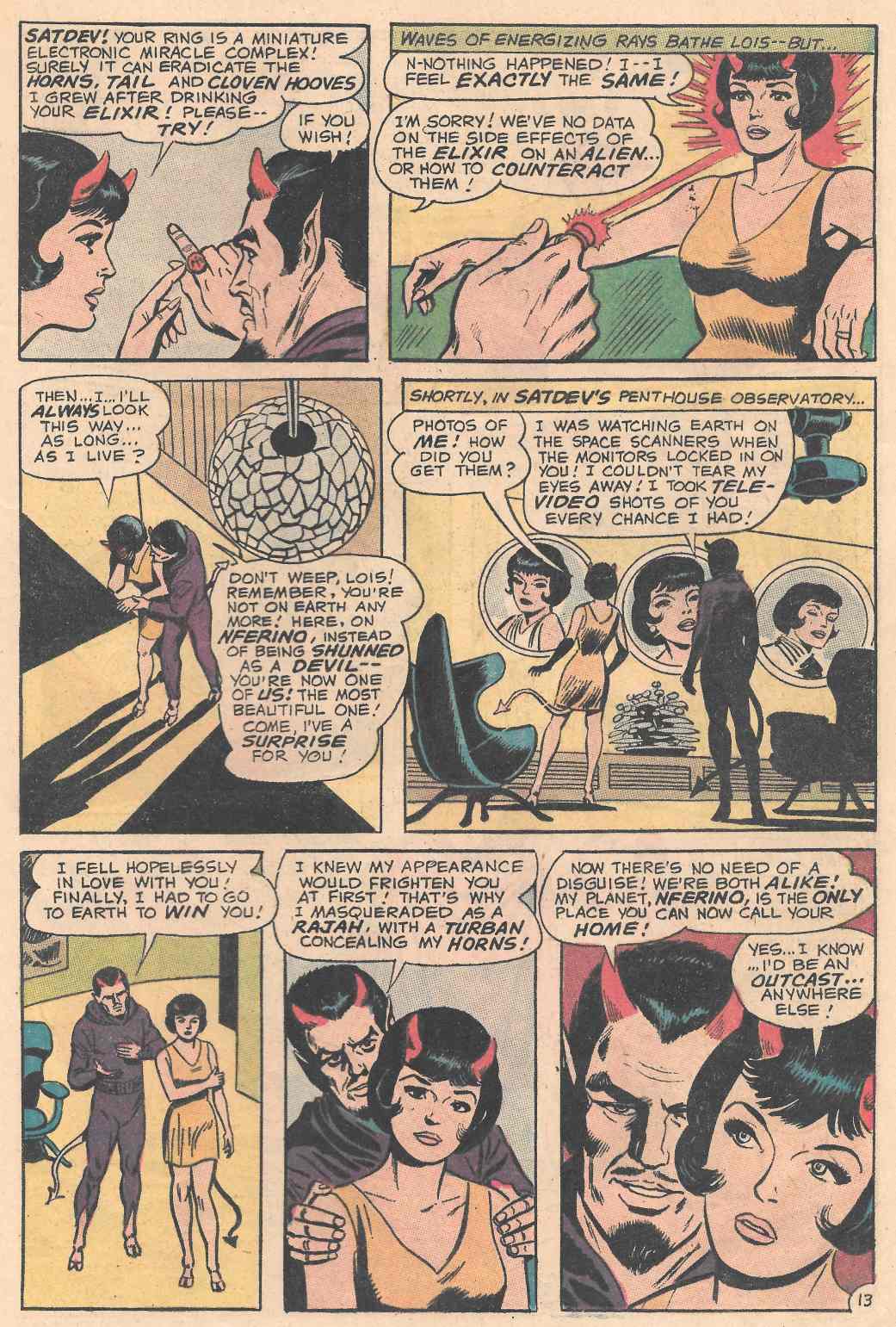 And after a night of hot devil dancing, she consents to wed him in the Nferno ceremony of Kvimha! (Gesundheit!) To do so she must purify herself by taking a hot sauna bath, which sounds nice although not in boiling sulfur springs. 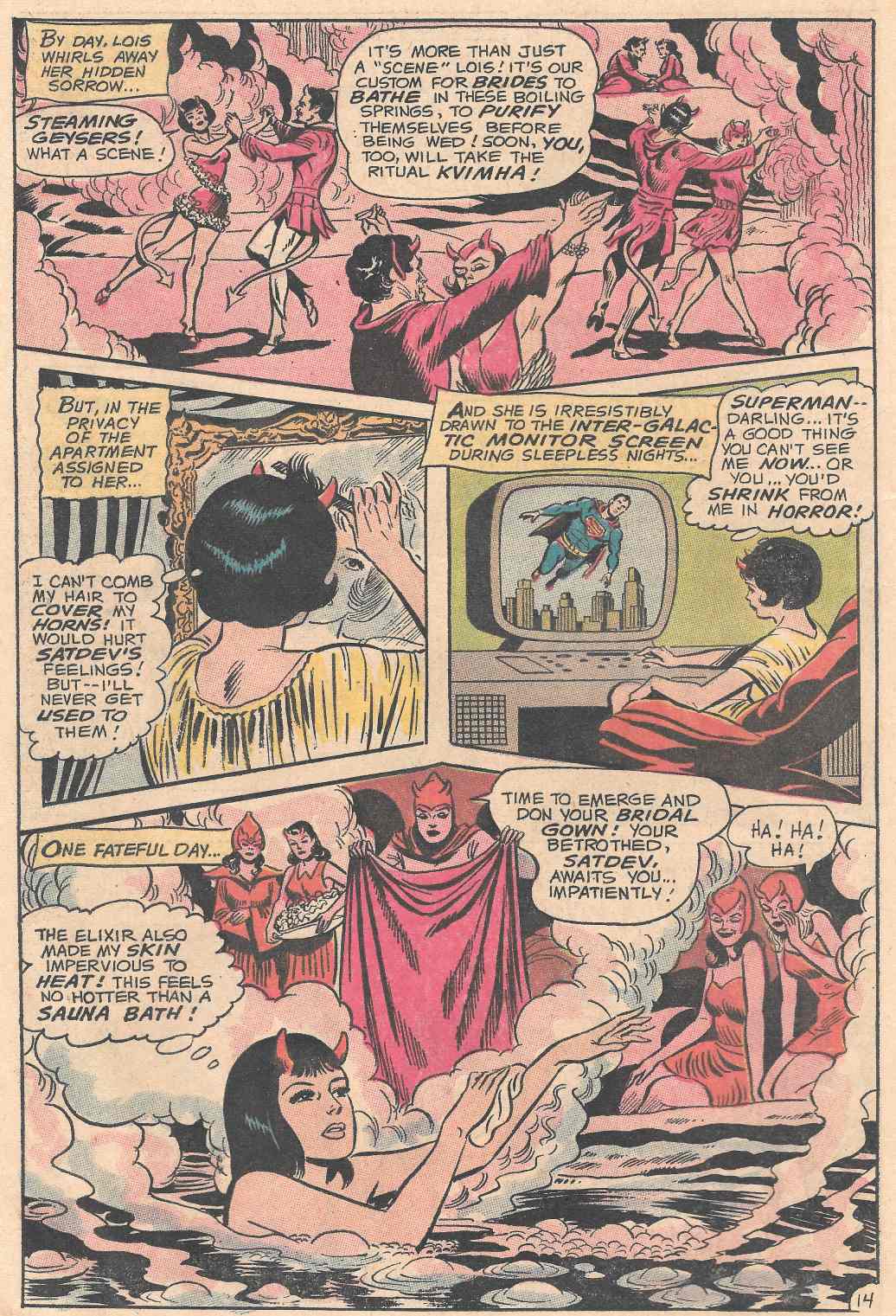 However, Lois gets cold feet after reading the inscription on the wedding ring Superman slipped on her finger. She realizes that even though Satdev is no devil, she still only loves the Man of Steel. Thus she opts to return only to have an after-effect of the spring water bath turn her back into a human as she teleports. 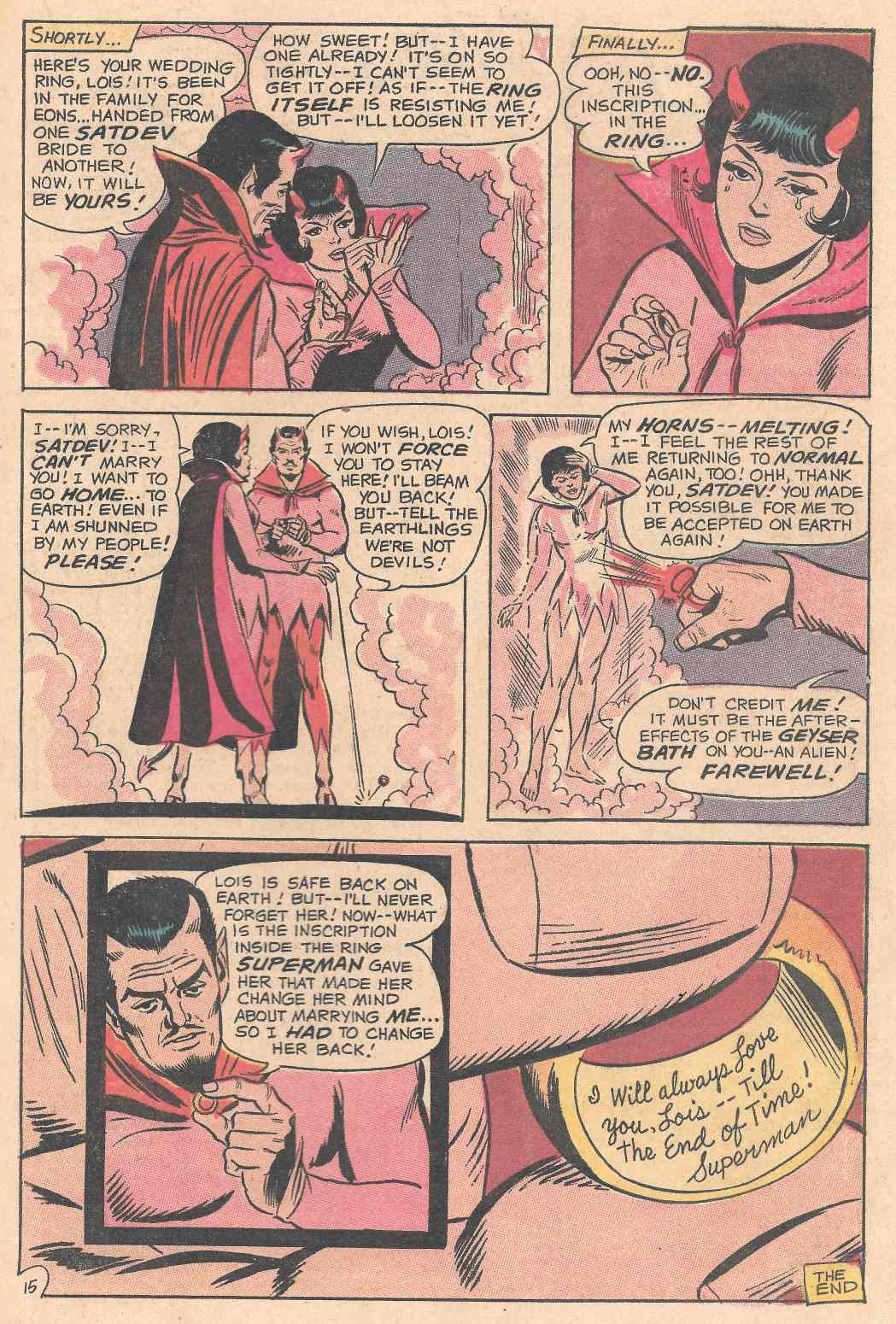 Satdev is left with a ring and his love for Lois. However, he total gives away that HE turned Lois into a devil and then changed her back when she rejected him. Dick move, Mr. Alien-devil.

Well, this wasn’t REALLY about devils, but I thought Crapbox readers would want the skinny from me so I included it. Plus there are so many people wanting a cheap devil costume, that Satdev’s ring power might be in high demand this year.
Posted by SonOfCthulhu at 3:37 AM