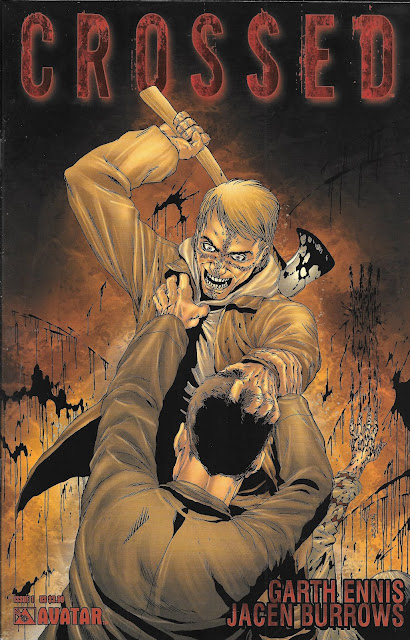 Terror! And not for the squeamish

I found Crossed late last year, both in and out of the Crapbox. Issue one fell with a bunch of other horror books and I read it with all the fear and terror that this one issue generates. Given it is an Ennis story, I was sucked in immediately. When a few weeks later, I saw the first trade on a Half-Price shelf, I grabbed it as well, with a feeling that mixes excitement with discomfort.

Let me get this out of the way: Crossed isn’t for everyone. It is harsh. Brutal. It is every worst nightmare you’ve had given comic book form. It will fuck you up, and if you are turned off by that language SKIP THIS REVIEW. Because Crossed will make you infinitely more unsettled than a few bits of harsh language.

With that buildup I should explain what Crossed is before dredging up the pages that will follow. Crossed is Ennis doing a twist on the zombie outbreak thing, although it has possibly more in common with David Cronenberg’s Shivers movie. The infection in Crossed doesn’t make someone the living dead, instead it…I’ll let Ennis explain it:

“The Crossed are people who – through infection – have given in to the absolute worst instincts that human beings can: murder, rape, torture, cannibalism, all of the most cruel and inventive kind imaginable. They are out of control, really. Their number one urge is to get their hands into normal people and commit every ghastly act they can think of – they can't fight it, and they don't want to.."

Basically everyone infected is a homicidal maniac, of the variety even our worst horror movies haven’t prepared us for. The tell-tale sign of infection? A rash that forms a cross like welt across the infected’s face. It’s a neat visual cue and it inverts all that religious iconography as well. You can’t fault Ennis for his story idea.

Where you may be able to fault him is with his no-holds barred approach to the plot of these books. Ennis and Burrows pull NO punches, creating one of the most terrifying dystopias I’ve come across in many a moon. It is so graphic and cruel that I feel a large number of my audience even on HERE during the month of Halloween will be turned off. It’s not because you are squeamish. It’s because it is that bleak. I can tell you that beyond issue one, the story only gets darker.

So bail out now or hold me harmless for trying. From this point forward I will be reviewing issue one in all its many, many atrocities. If you can’t finish up, don’t worry. It takes a strong heart to make it through a reality this screwed up. No harm-no foul.

We begin with no preamble, no idea what has happened. We have two people with rifles, Cindy and Stan, looking down upon a city using binoculars. The pair are trying to see if it is safe to go down. We get that immediately because this is the setup of every zombie apocalypse comic. Stan says it looks clear until it suddenly doesn’t. Then he pulls the glasses away, weary at having seen too much brutality. Cindy just curses their bad luck at being unable to resupply. 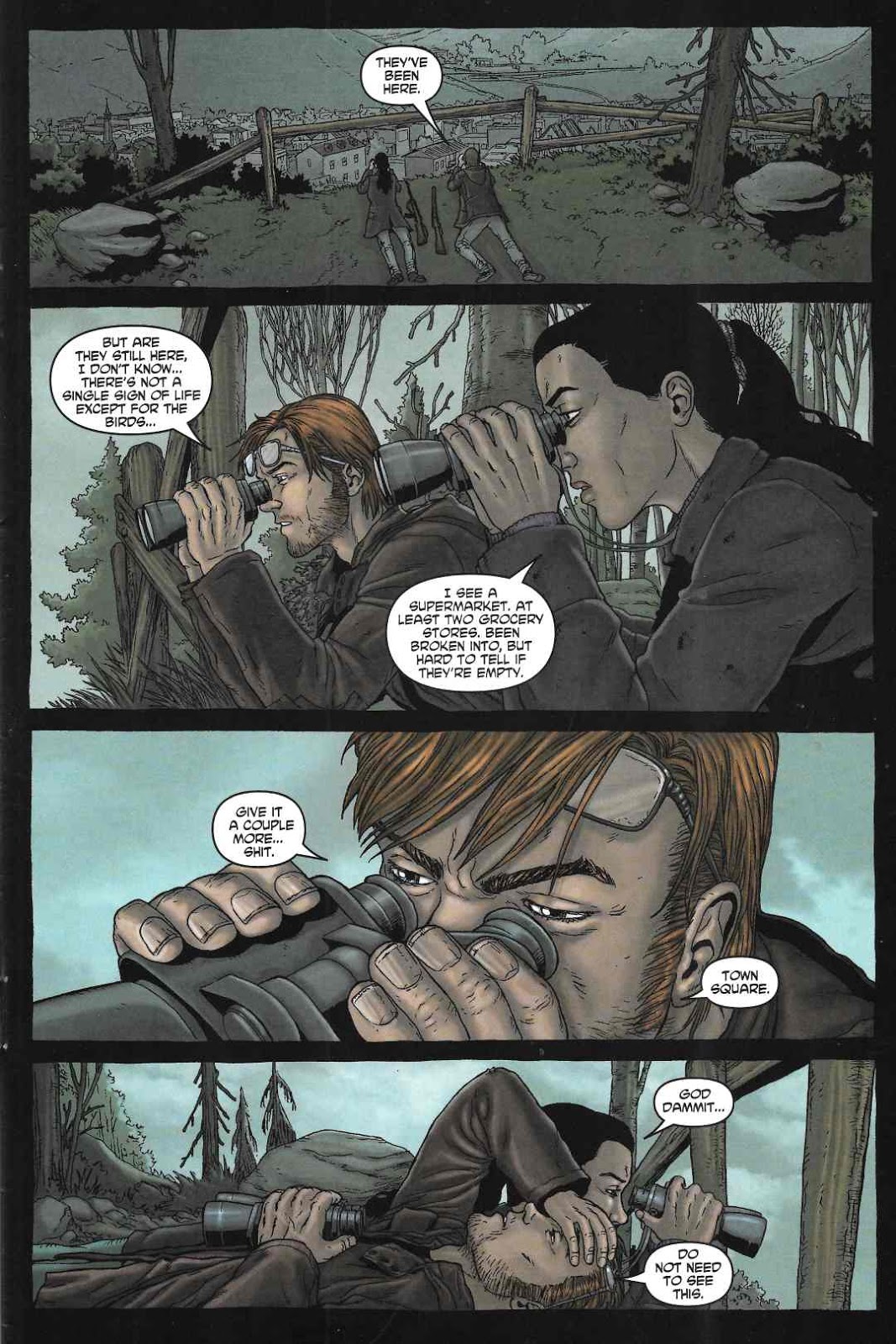 While we pull back and find out Cindy has a son, Patrick, with her, we also catch a glimpse of the atrocity going on in the town square as infected men and women perform terrible acts on non-infected victims. 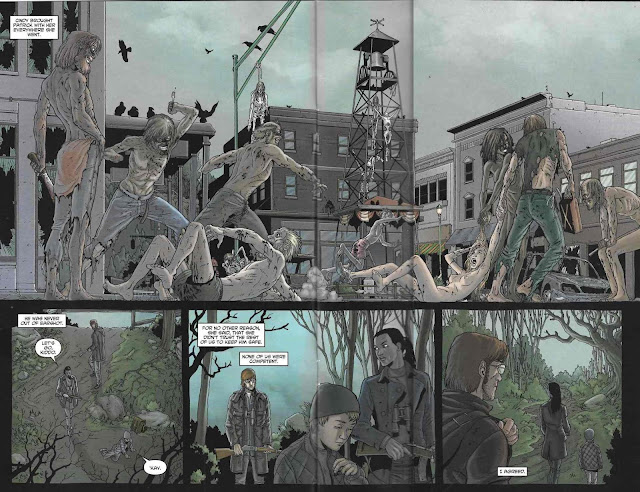 Cindy, Stan, and Patrick make it back to the underpass they are hiding out in. The group is larger than just them, and that either gives them a greater chance of survival or more chance for all of these people to become victims in some mortifying way. Stan tells the guard that he will relieve him as soon as he gets a bite. 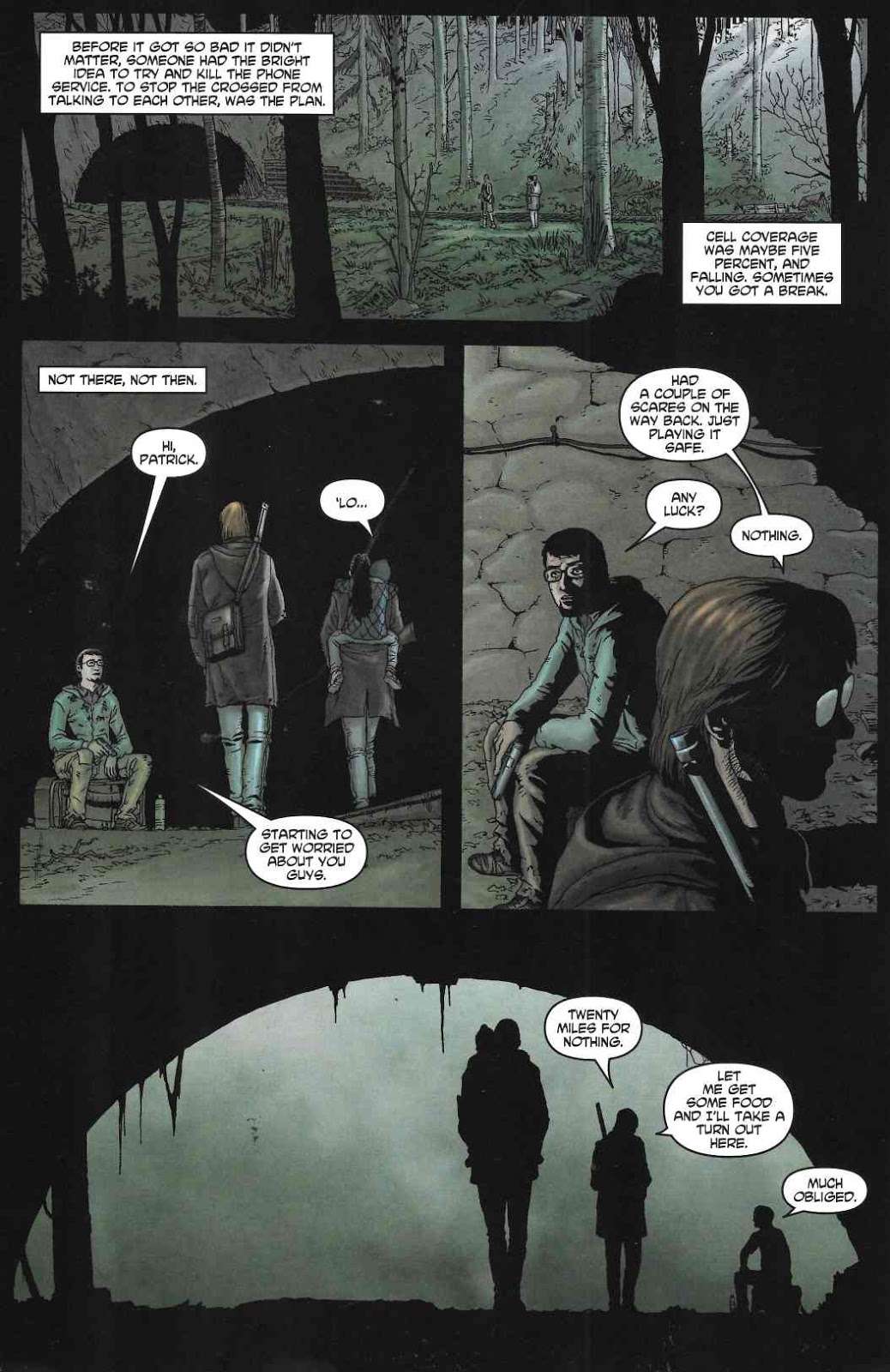 And we meet the rest of our group, huddled in the dark and hiding from the world outside. Stan has a vividly horrifying recollection about an ex-Marine he traveled with who was captured and killed. His only thought on it now as that he was glad that he didn’t tell the Crossed where he was hiding. The future in this world is bleak. 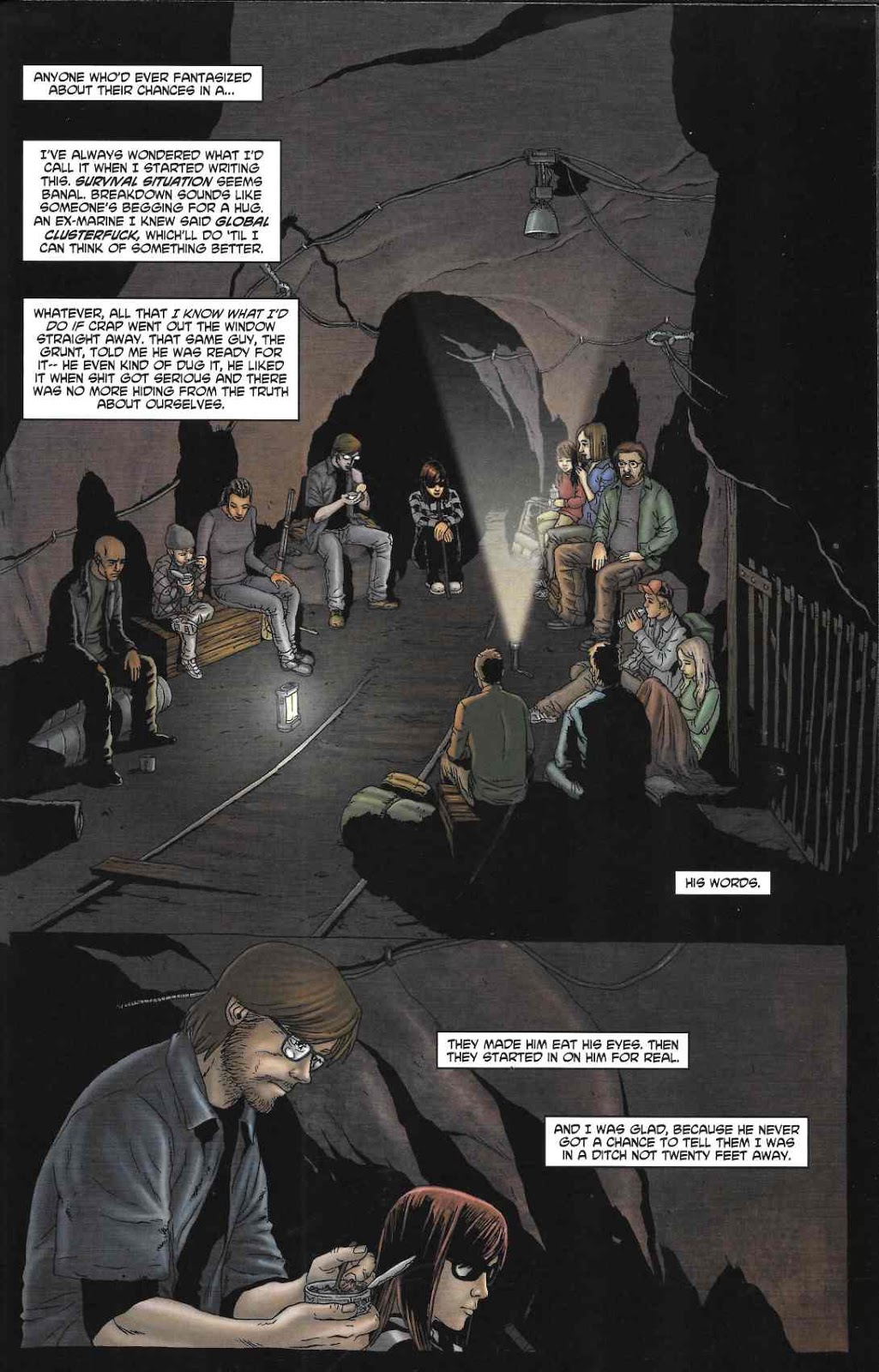 As he eats the meager can of beans that is supper, he reflects on what he knows about them. You can’t bargain with them. They will win in most firefights. Looting the losers is the only way to come out ahead. No one had faith or hope anymore. 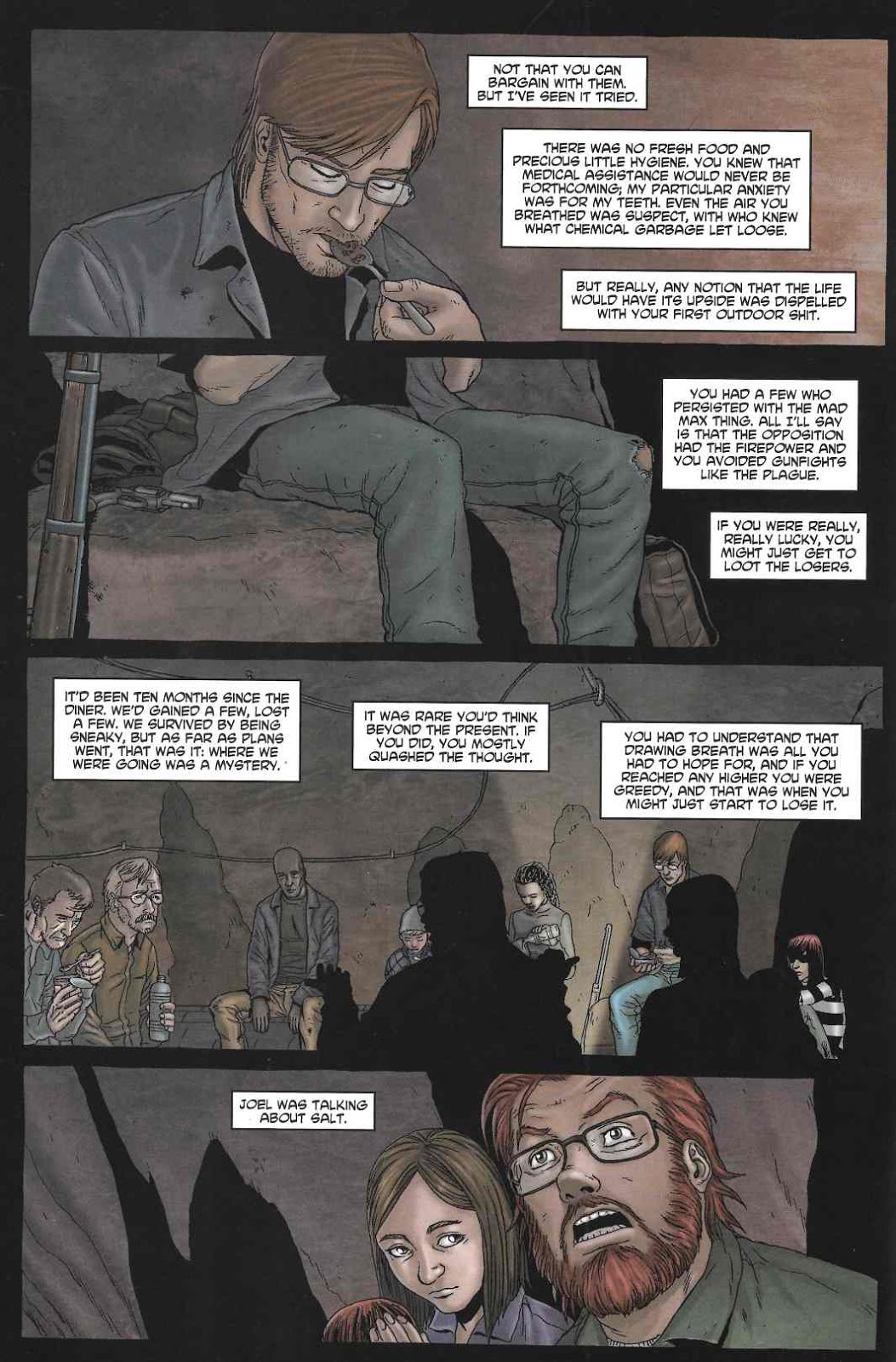 No one except Joel. Joel has faith in salt. 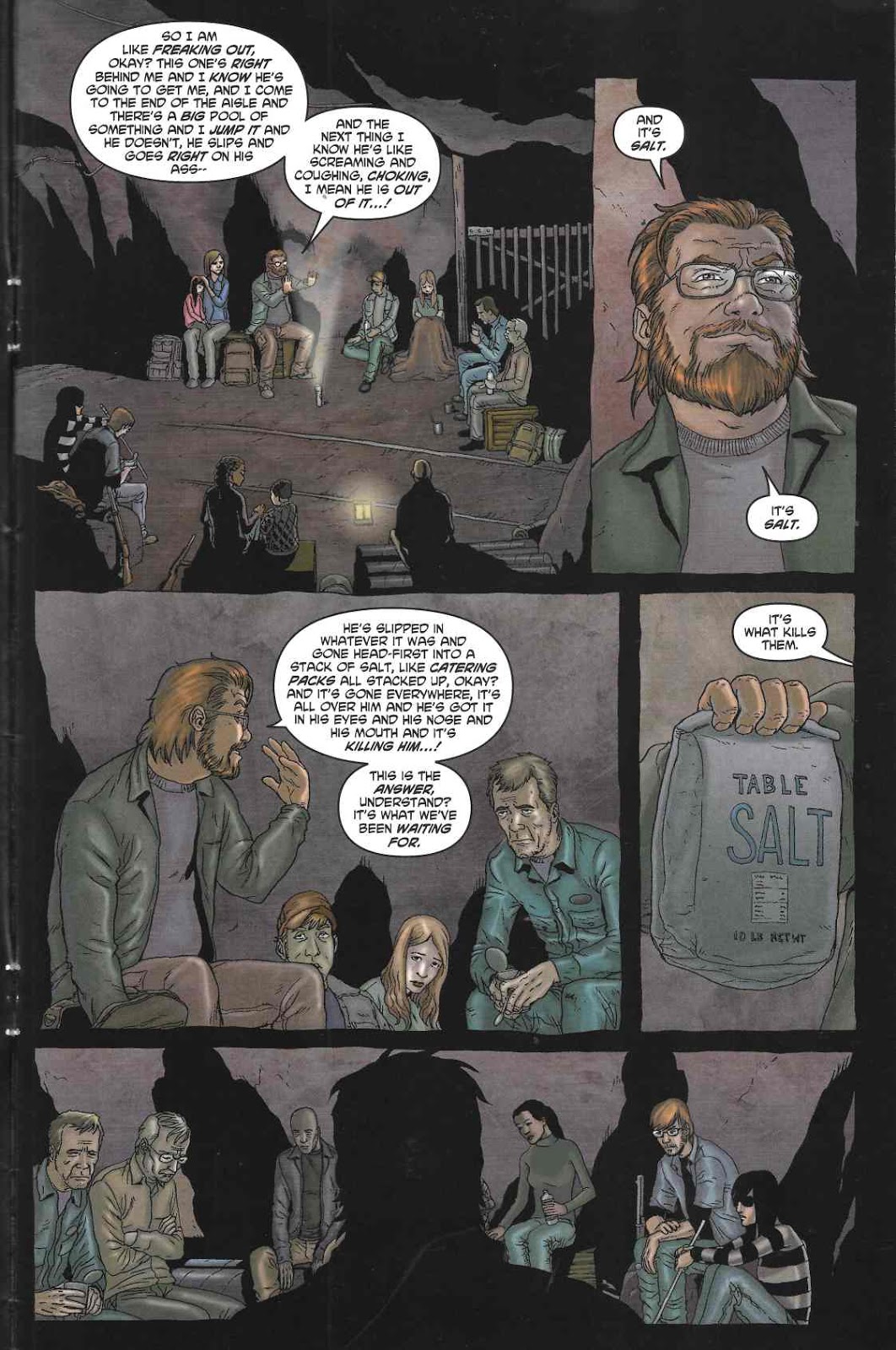 If you listen to his story it sounds rational, almost sane. Joel had an experience. It is improbable and everyone knows it. But Joel believes. He’s a believer. He’s a believer because he has to be. It is all that is holding him together. A way out of this mess of a world he’s found himself in. People do this all the time. They believe in religion, they look to celebrities for hope, or put their trust in guns and government. We’re going to see how Joel’s hope works out for him.

As for Stan, he hears Cindy and puts his faith in something different. In staying alive and in staying human. With those thoughts, he relieves the night watchman. 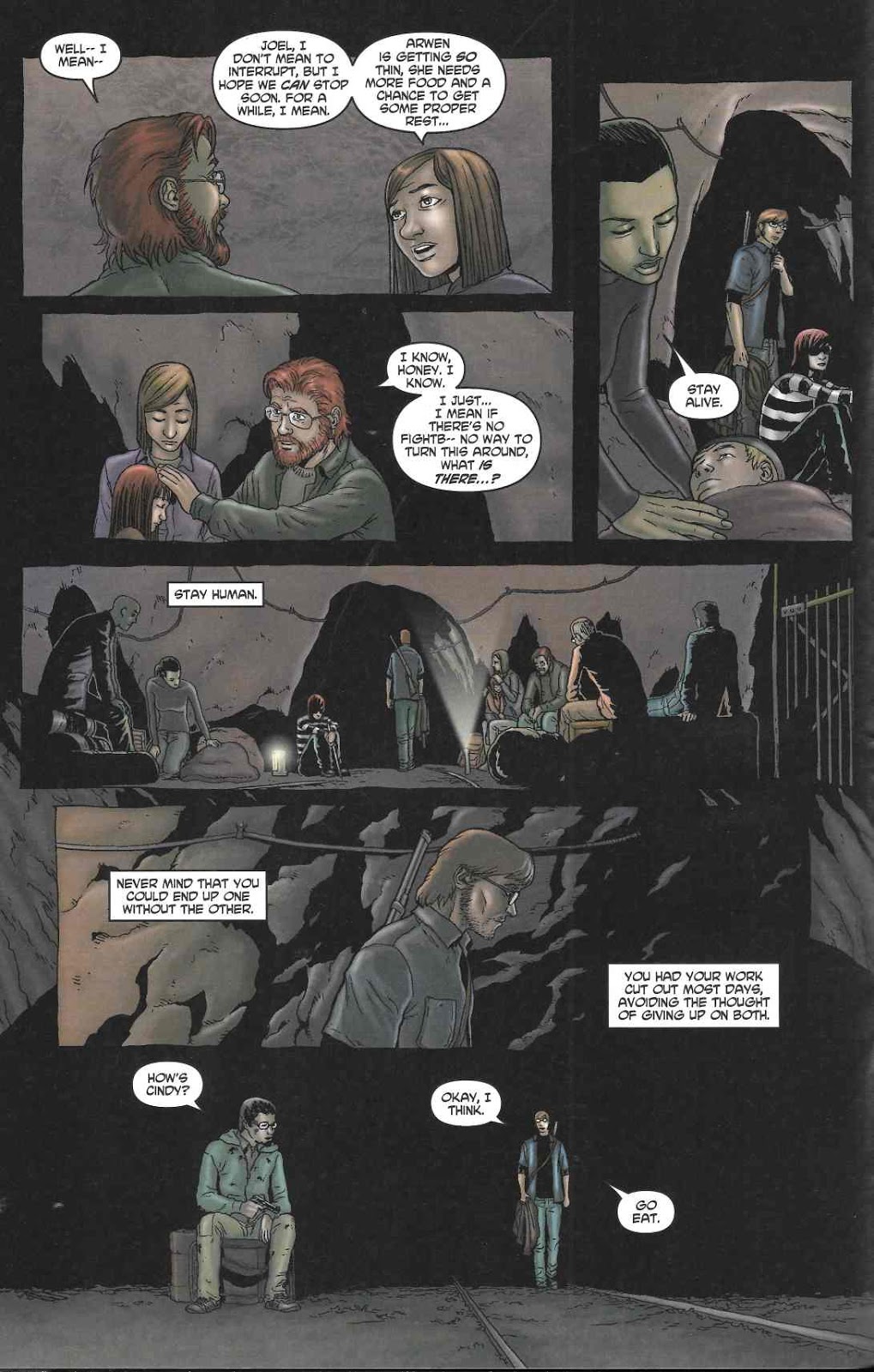 …and drifts back into memories of a not to distant time. A time right after all hell broke loose. He was helping Thomas and his girlfriend Kelly, who had recently been blinded, escape from the madness that had just broken out. In the distance a large explosion goes off, but right over the fence is madness… 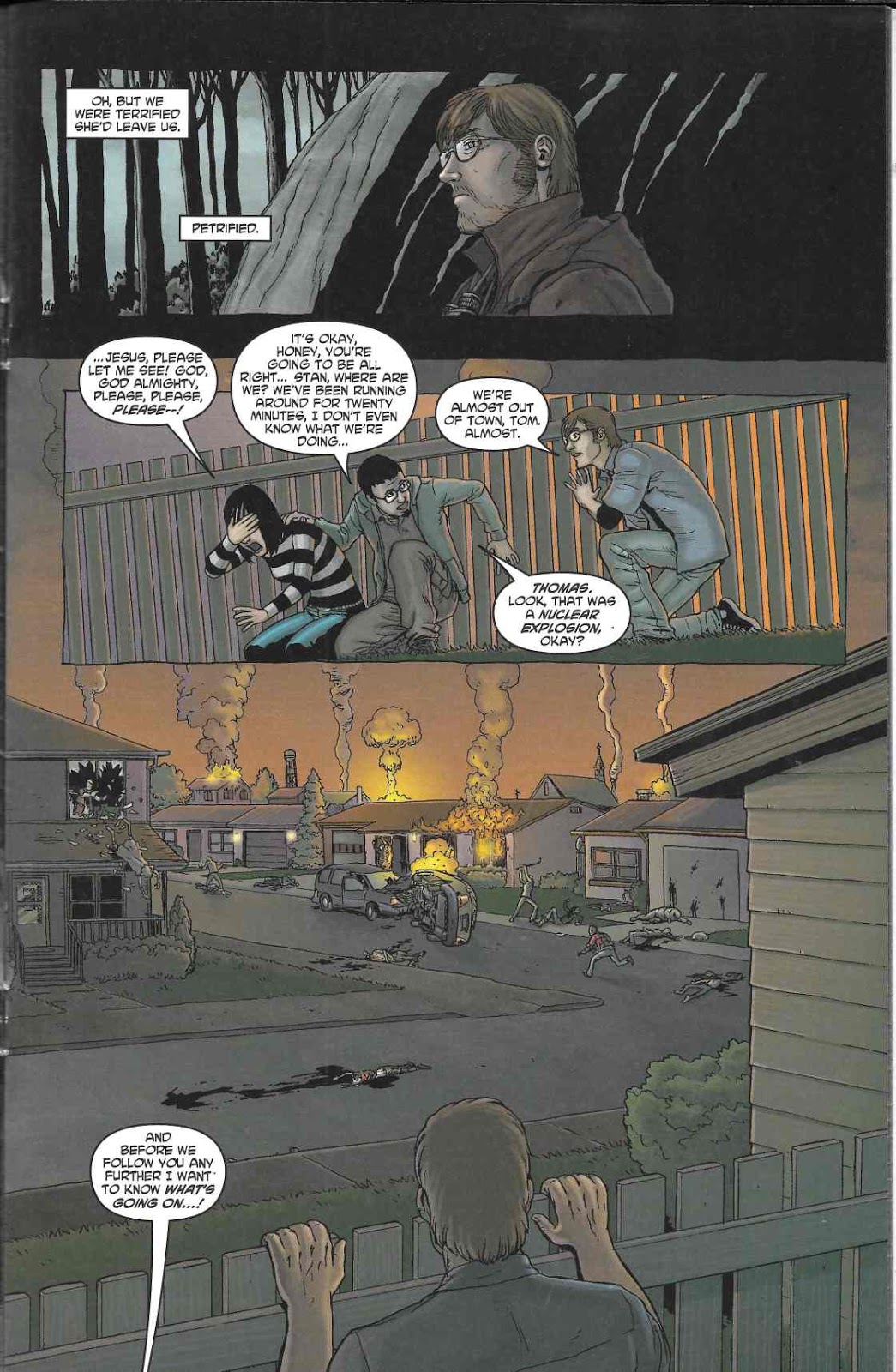 …and it is a madness that is right on top of them. This woman breaks through the fence. She’s completely given over to the disease and someone has shanked her good in the kidney. But even though she is bleeding out, she still wants to harm others. 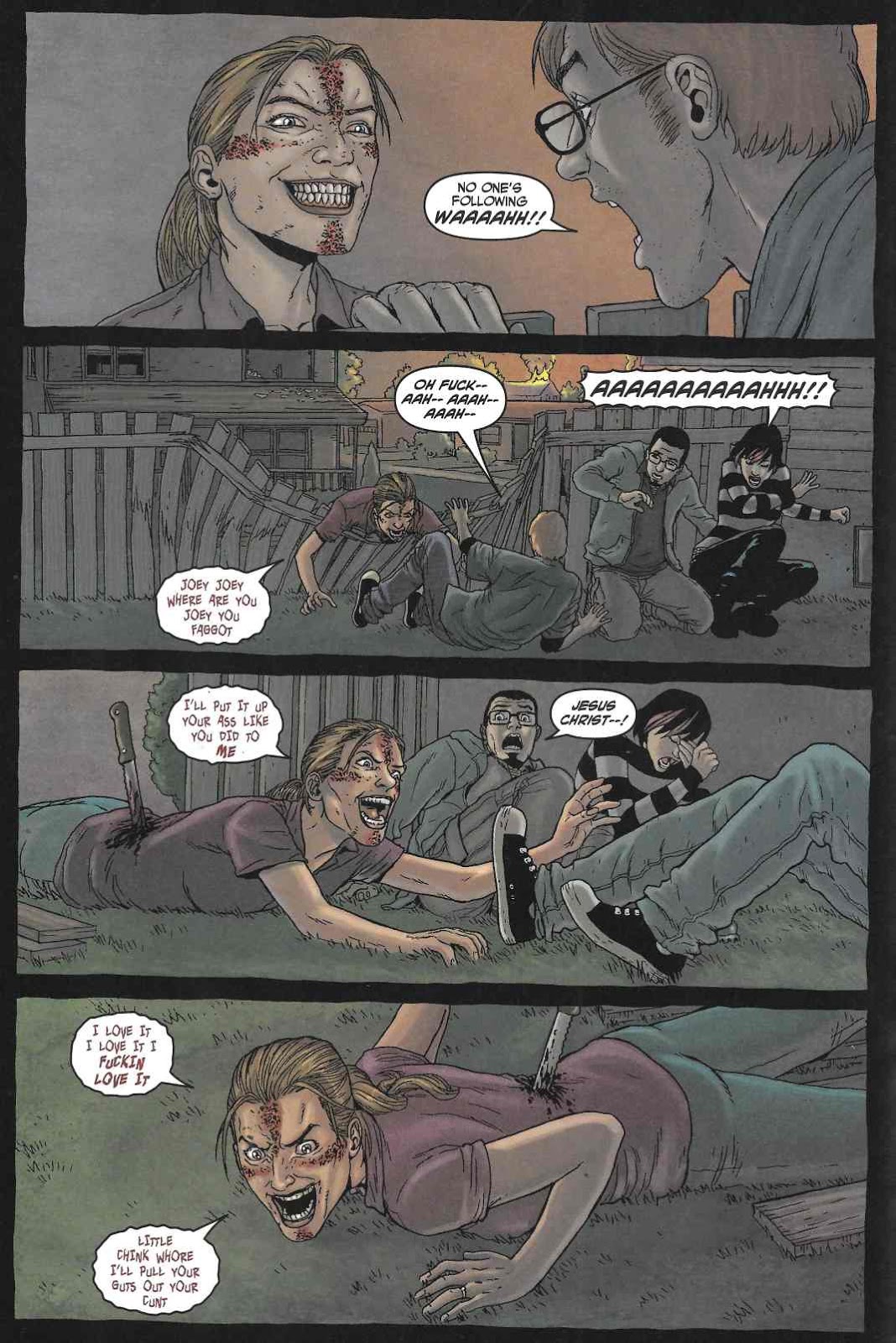 And she is enraptured by her own mutilation. The Crossed are some sick, sick people. At that moment though a savior to these people appears… 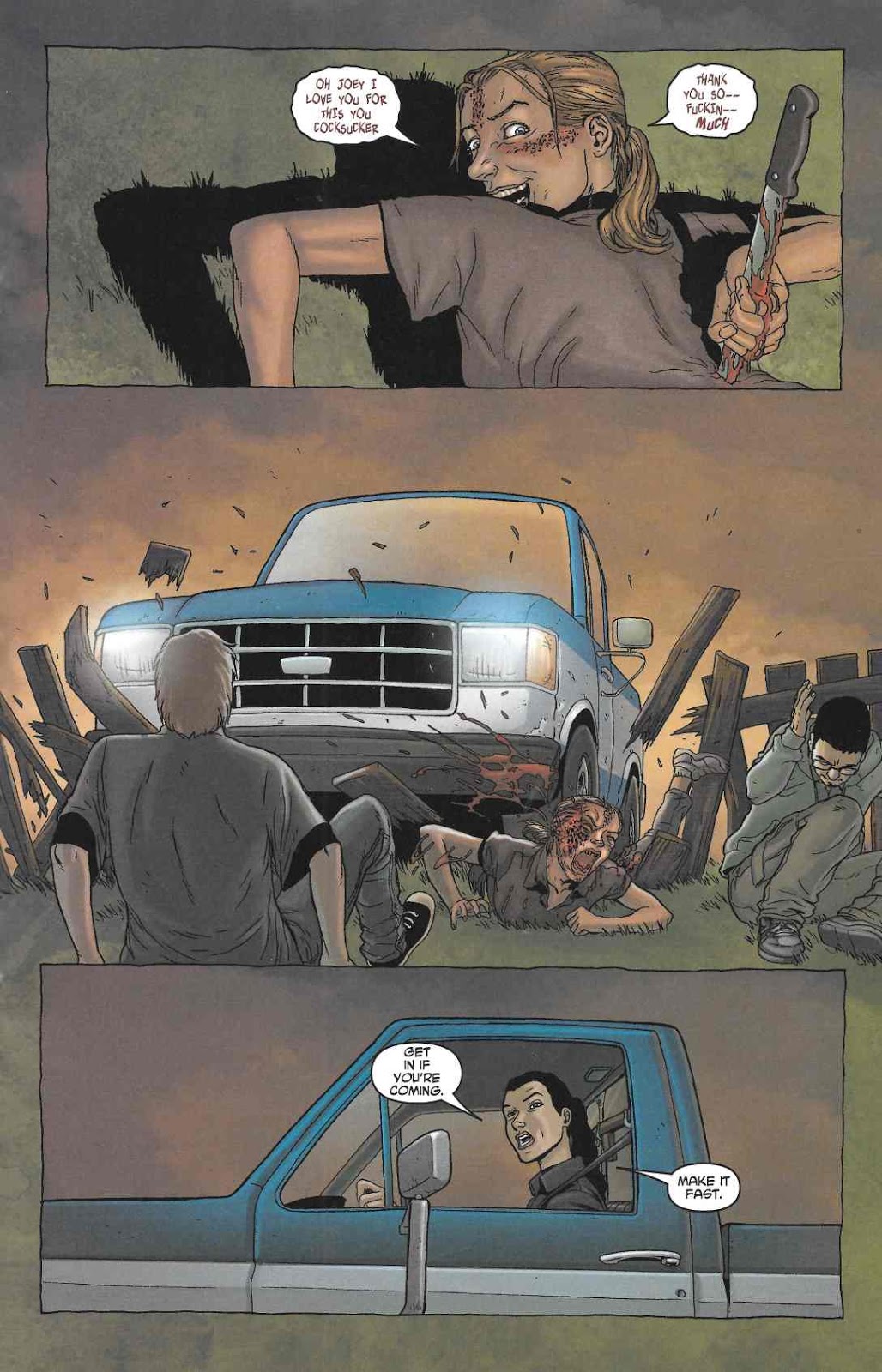 Cindy crushes the woman under her wheel and picks up all our survivors. As quick introductions are made as our characters pile in the truck. As for our Crossed, the disease removes most of our reason centers and amps up the libido. Humans reduced to less than animals. 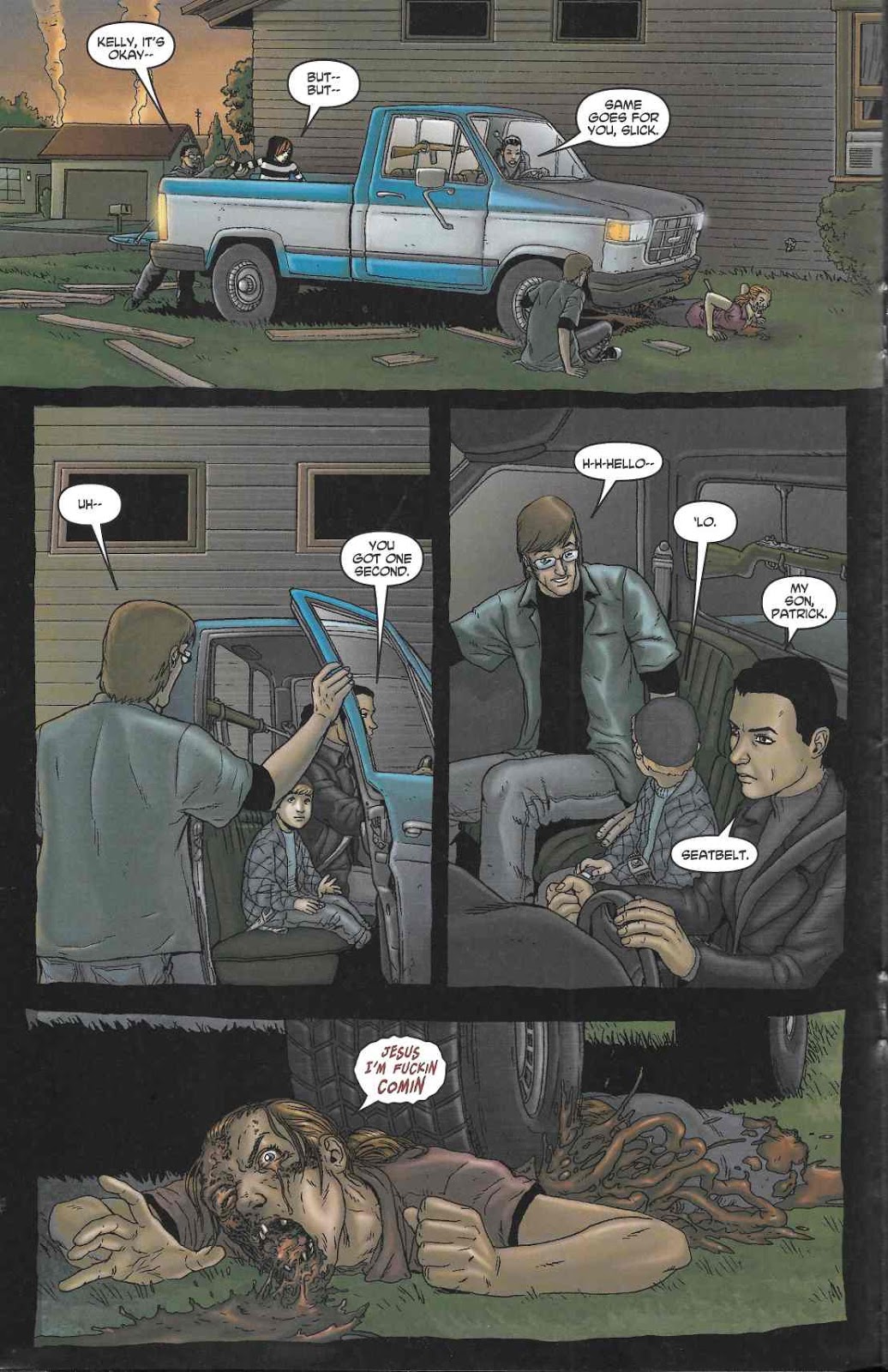 Cindy and Stan know each other and in their chats as they jet out of town they mention recent history. They were both at a diner when the virus swept through and both of them are running on adrenalin. 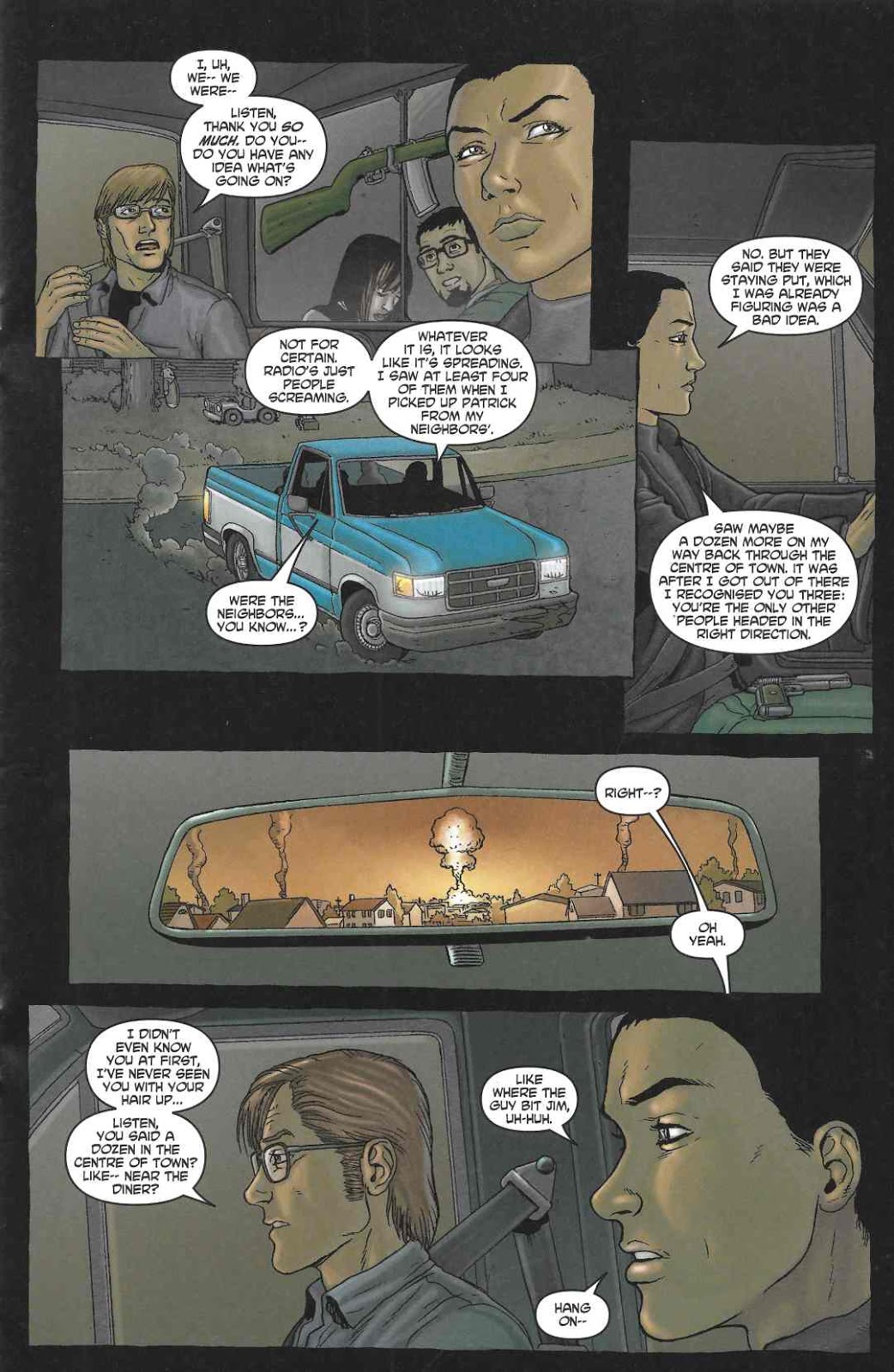 Cindy isn’t letting anyone stand in her way. She left the diner to get her son to safety and that’s her goal. Unfortunately her ex-husband was infected. He held Cindy’s ear and head to the stove. Right now, no one knows where to go, but Cindy isn’t waiting on anyone to solve that riddle for her. She is the series tough guy and her relationship with Stan works in that she is closed off on so many levels. Stan is not just along for the ride, but he is definitely struggling to maintain his own humanity in the wake of all this. 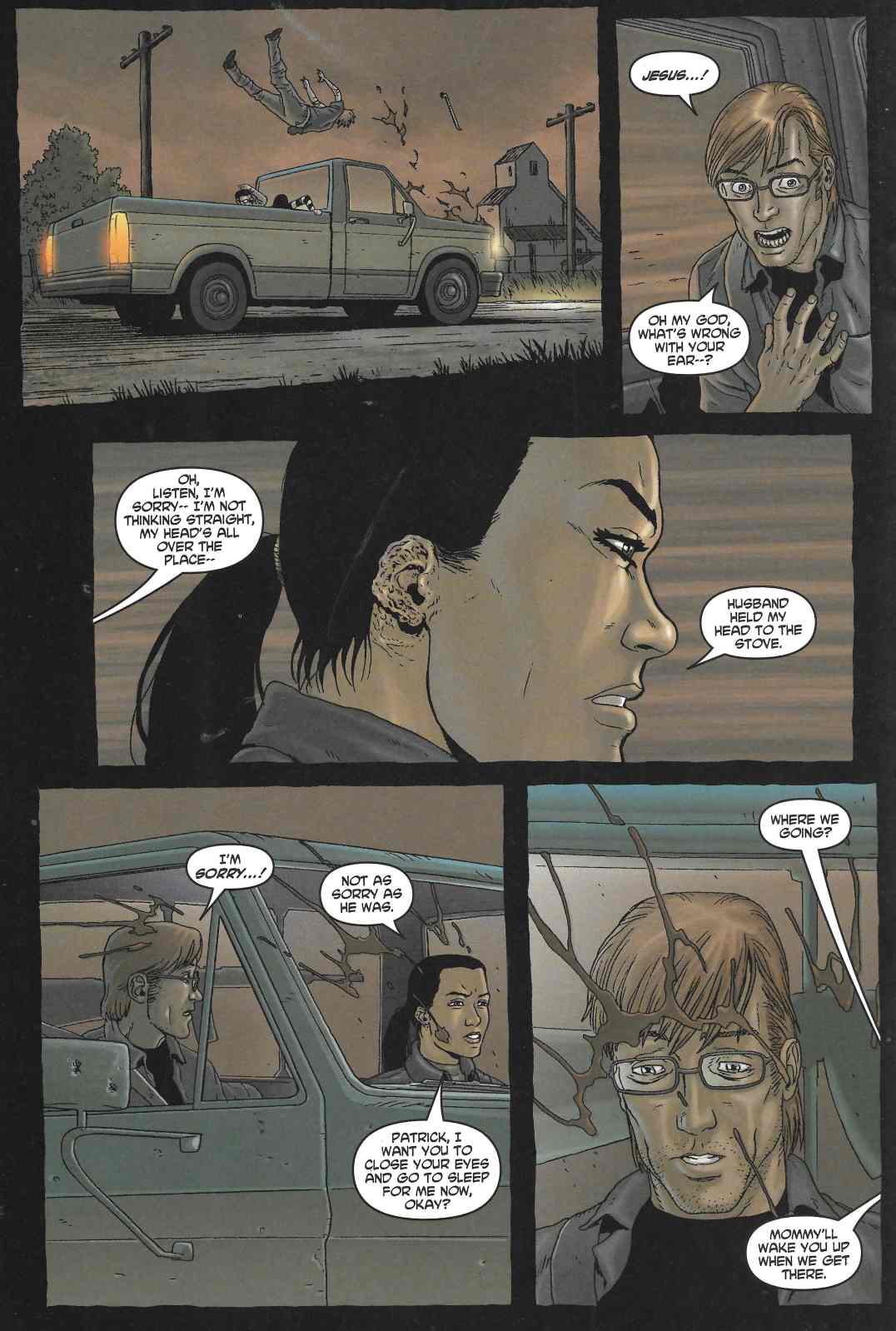 And speaking of waking, back in the present Stan is woken by Cindy. They have to move as the Crossed are heading their way in a sweep. Unfortunately, one of the party has an accident making it up the hill. 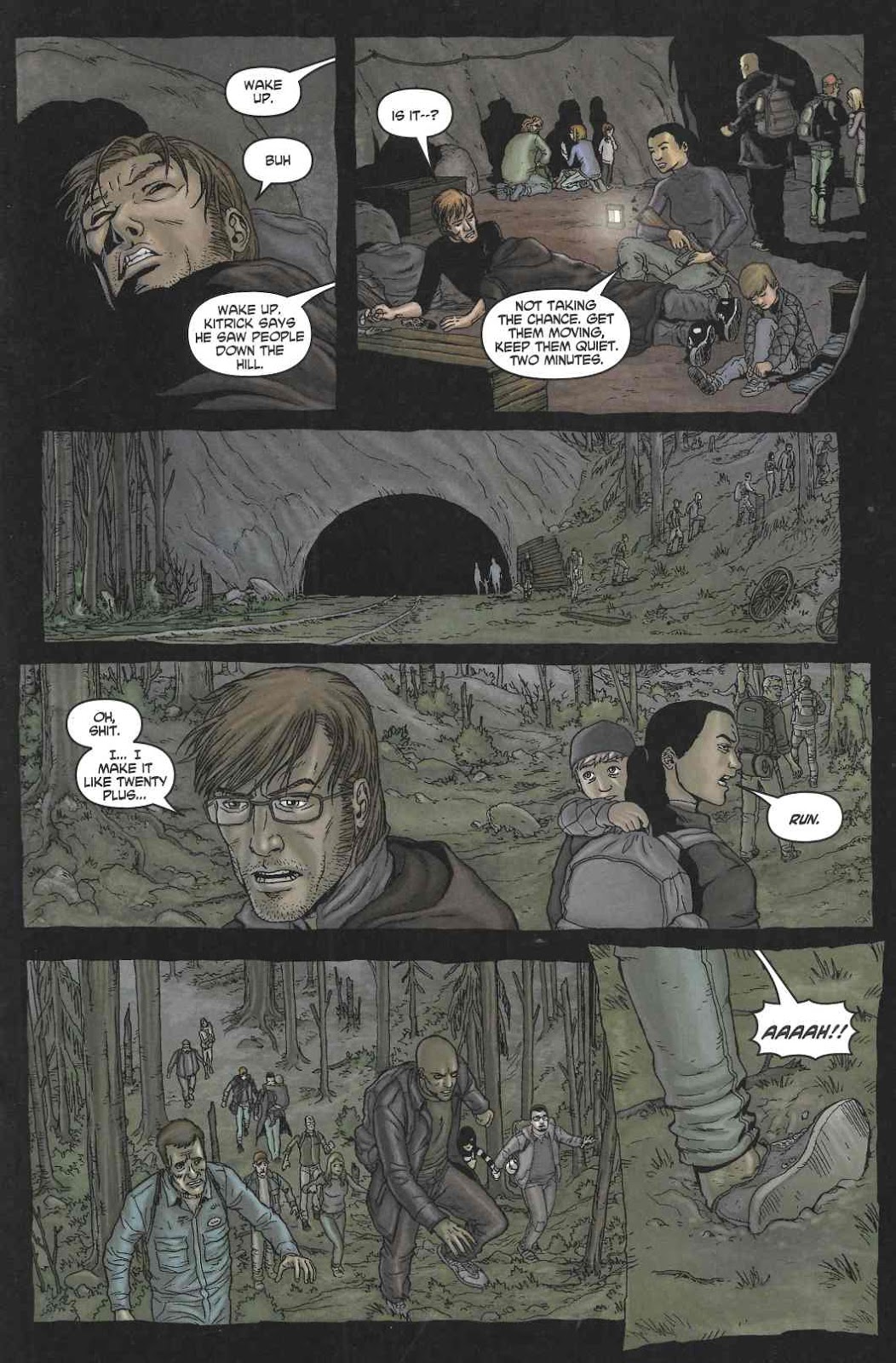 Joel’s wife Amy is injured and will not make it. She begs Joel to carry their daughter, shoot her in the head, and go. But Joel has another idea… 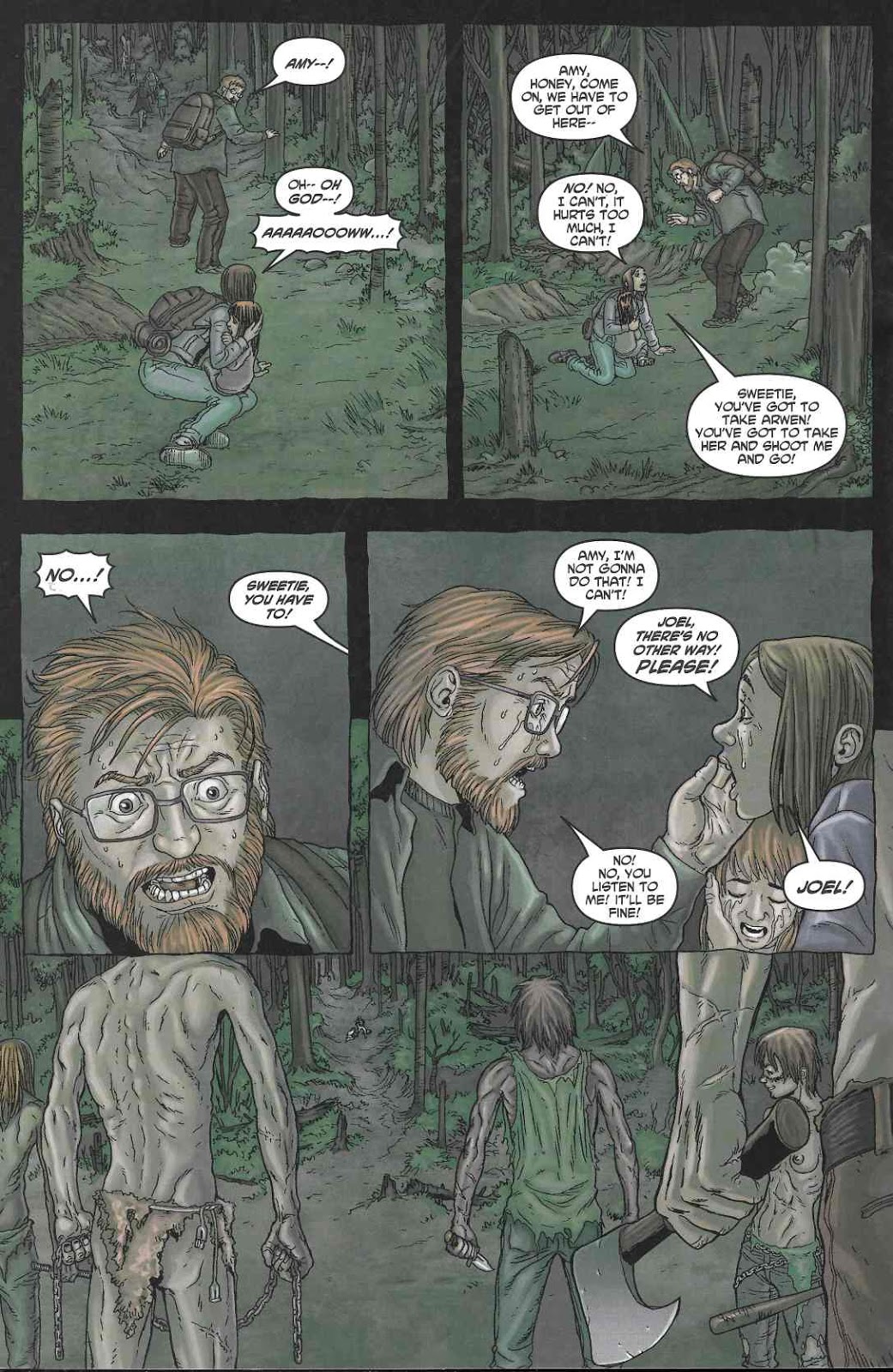 Because remember Joel still has faith that this will all work out. Amy begs him not to… 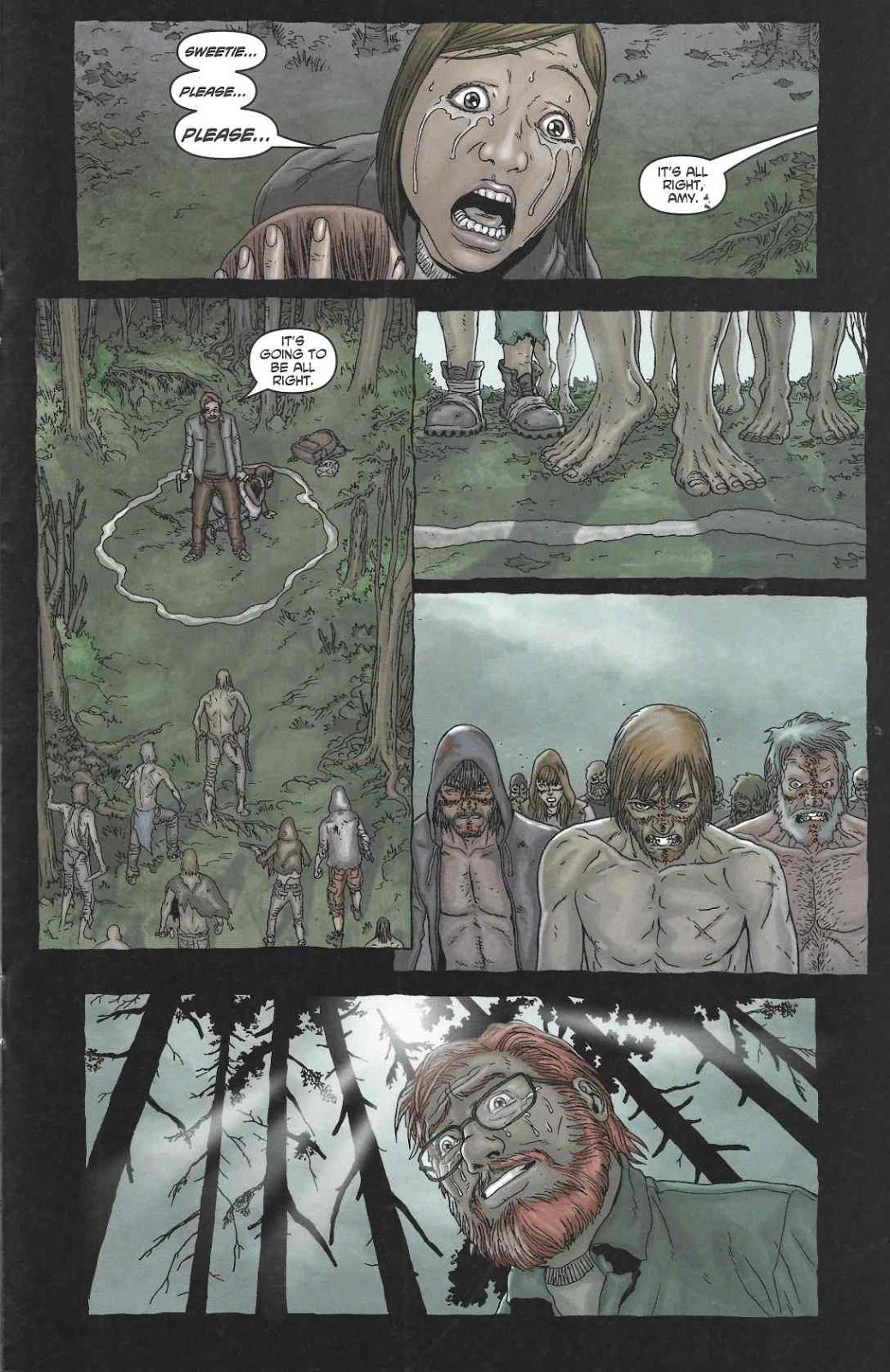 …and curses him as they are all torn apart in front of each other. 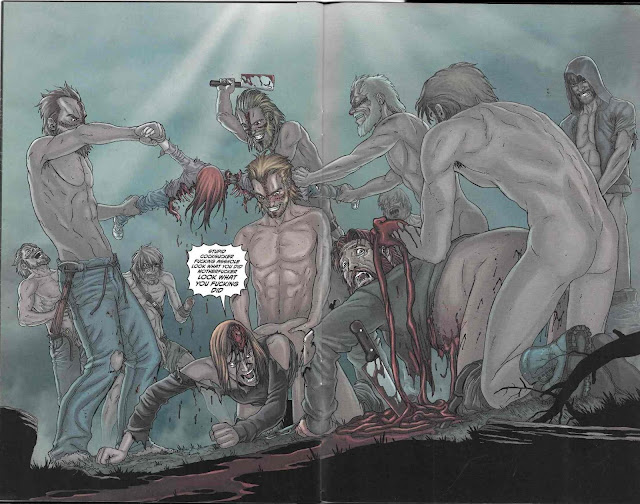 There is no hope to be had in the world of Crossed. None. Don’t bring it with you. Just run.

Stan starts to look back for them. Cindy tells him not to. He takes her advice. 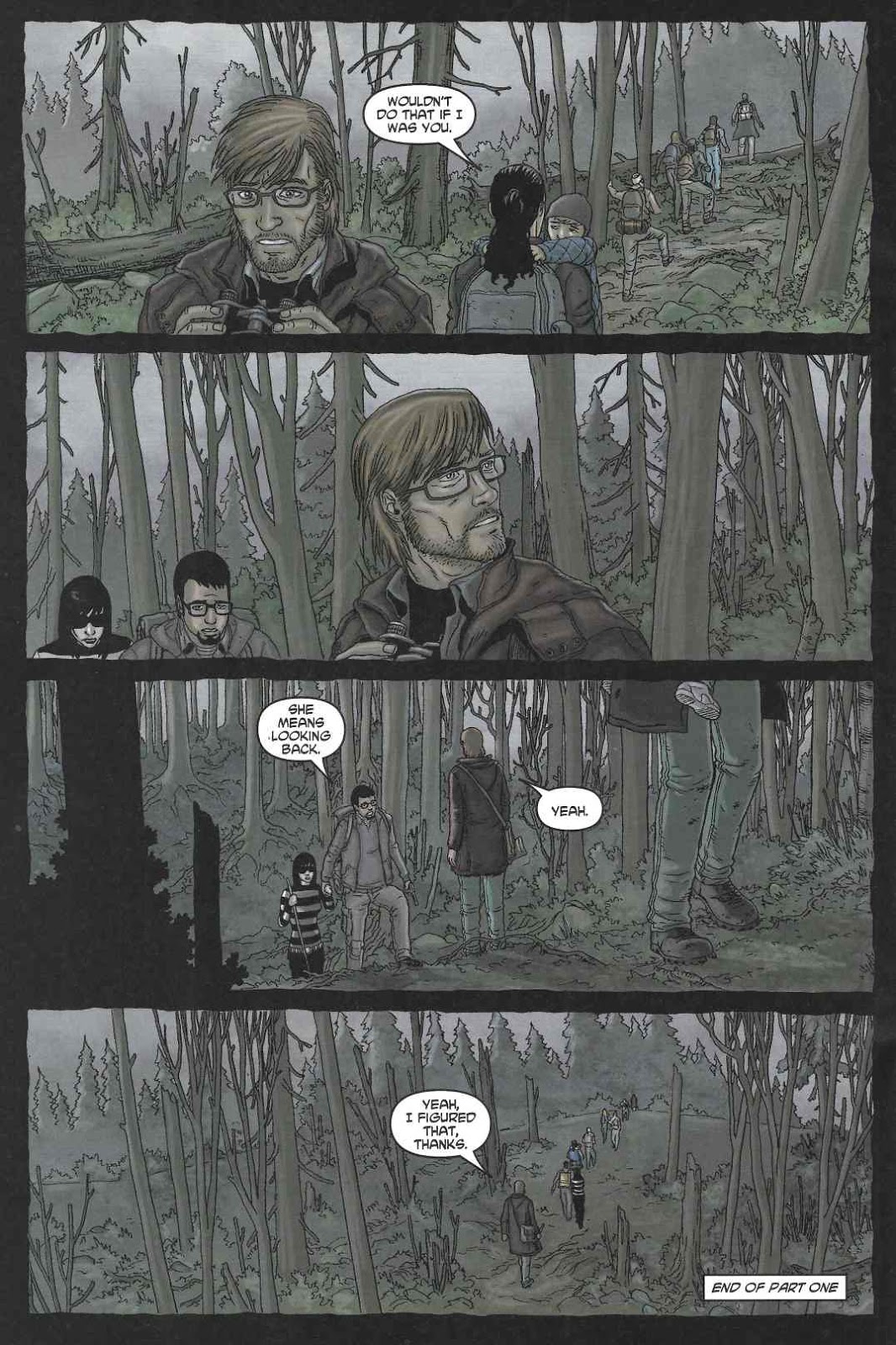 And that’s where this issue ends. Brutal and unrelenting and things only get worse from here.

Crossed puts the Crapbox in a tough position. It is compelling in the way that the Walking Dead is at the best of times. You want to root for the characters to survive against insurmountable odds. You need to see them overcome this obstacles placed in front of them.

However, Ellis doesn’t let up and the story is not one that leans on giving you a happy ending. It is as Stan says, the happy ending is staying alive another day and staying human. In these type of books that is a hard fought test.

Normally I would say buy, but I’m going to be clear that what you have here is a very violent, gory, and adult story. It isn’t for the squeamish or the easily upset. But if you can deal with the bleak universe that Ellis has created, these are some of the best that the apocalyptical survival drama has to offer.
Posted by SonOfCthulhu at 2:28 AM