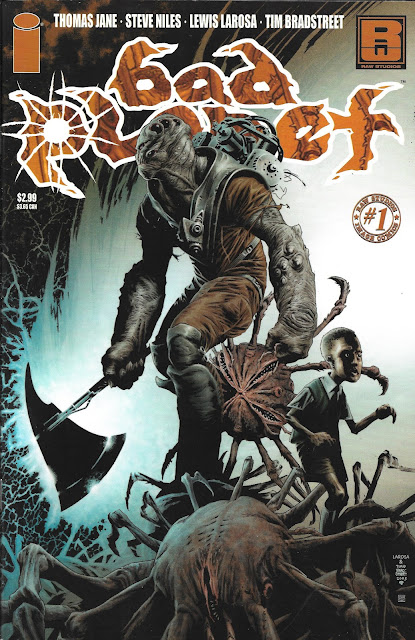 Number Three in our “Niles” fecta

We have to dig back a bit to find this one, but it is worth pulling out the shovels for. Issue one spends a bunch of time getting act one underway, which is FINE due to the art. This is just a gorgeous book, giving Jane and Niles a 23 page pass on moving the story beyond interesting and into hooking my next four bucks.

And yes, that’s THE Thomas Jane – Punisher to some of us , the Worst Father of the Year from The Mist to others, or the guy you don’t want to buy drugs from in Boogie Nights to the rest. He’s already proven himself in the Crapbox’s eyes for his work in Alien Pig Farm 3000, a book that comes AFTER this one, but screw it. He’s got Niles with him and I’d trust the two of them better than half the unknowns in my stacks.

Two capable authors, an amazing art crew, and a slow-burn premise of alien invasion that looks like it goes all Critter-tastic. Let’s lite this candlestick and get to the review’in!

We start in the cold dark expanse of space, with a tiny tug ship towing a massive rock hewn by H.R. Giger himself. The couple aboard the ship are in a lover’s spat. 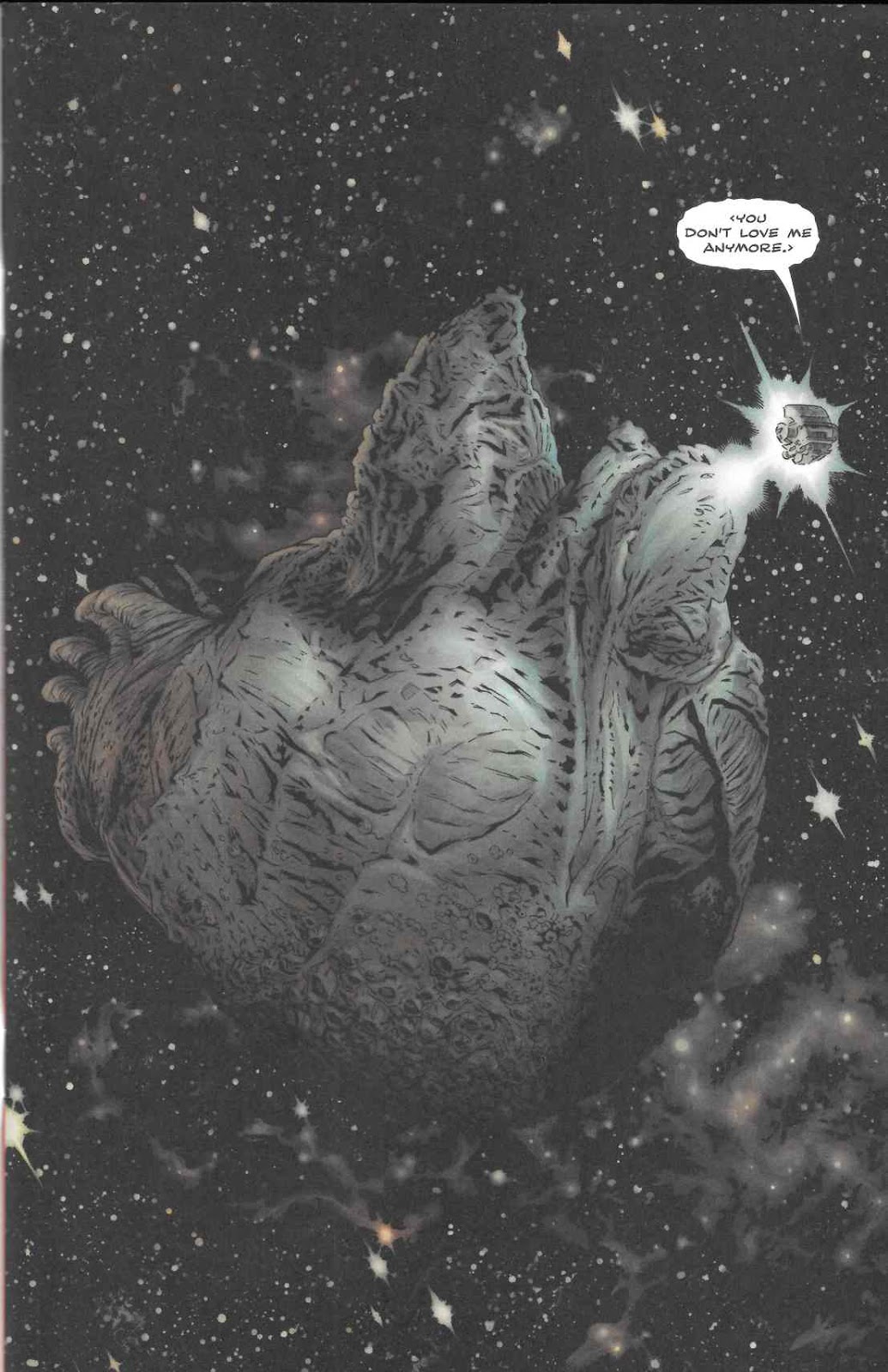 The male (I’m assuming here) decides he wants to pleasure himself and the female does a passive-aggressive allowing him to do so if he closes the pod door between them. (JUST LOOK at how gorgeous all those panels are. I haven’t seen art this good since Heavy Metal days. Loving ever dab of color and pencil stroke.) 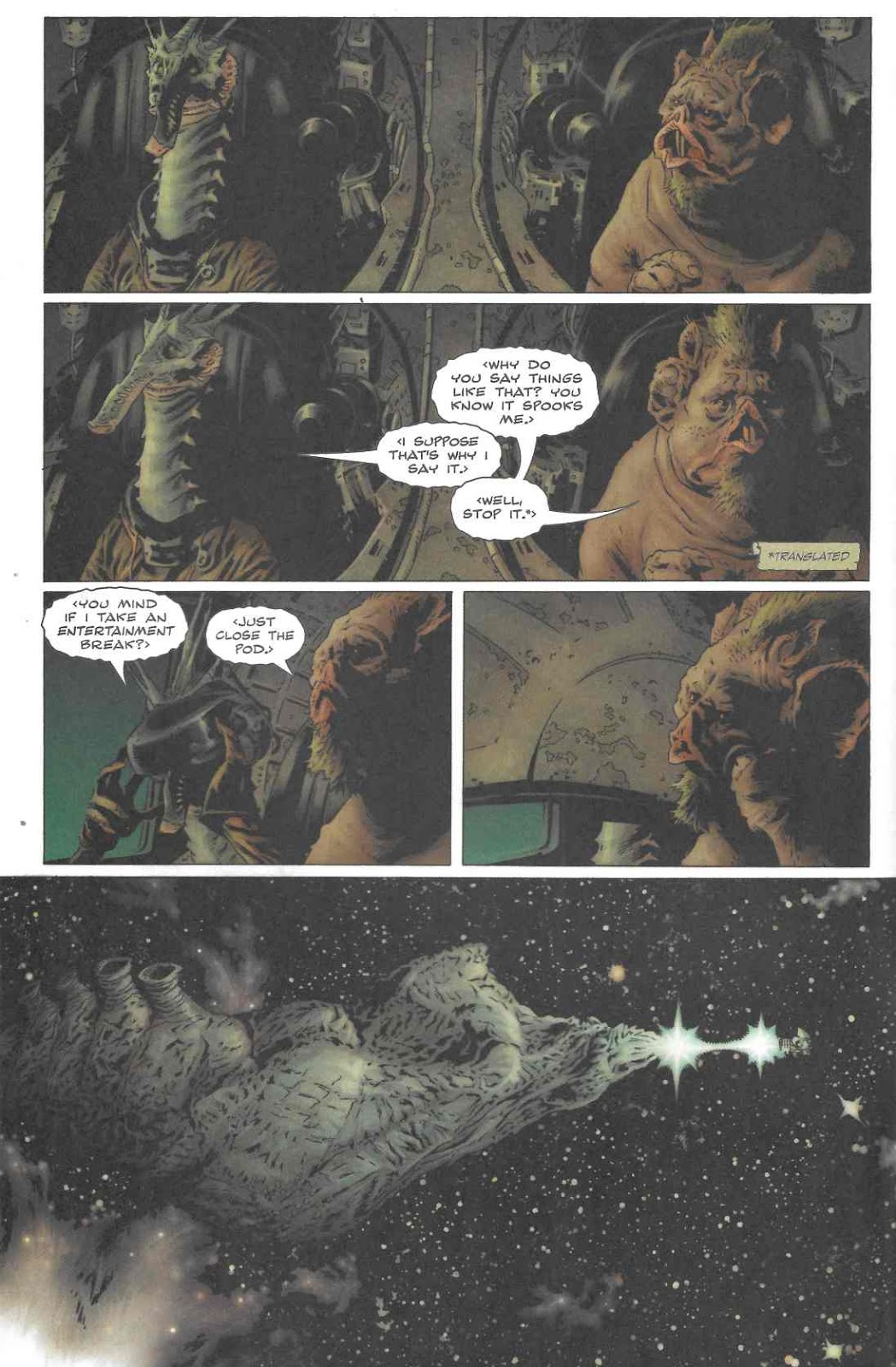 Our wife (again, assuming) decides she can’t take his casual virtual infidelity and plugs in to see what he’s watching. Finding out it’s a sex space cat-person, she alters the program a bit. 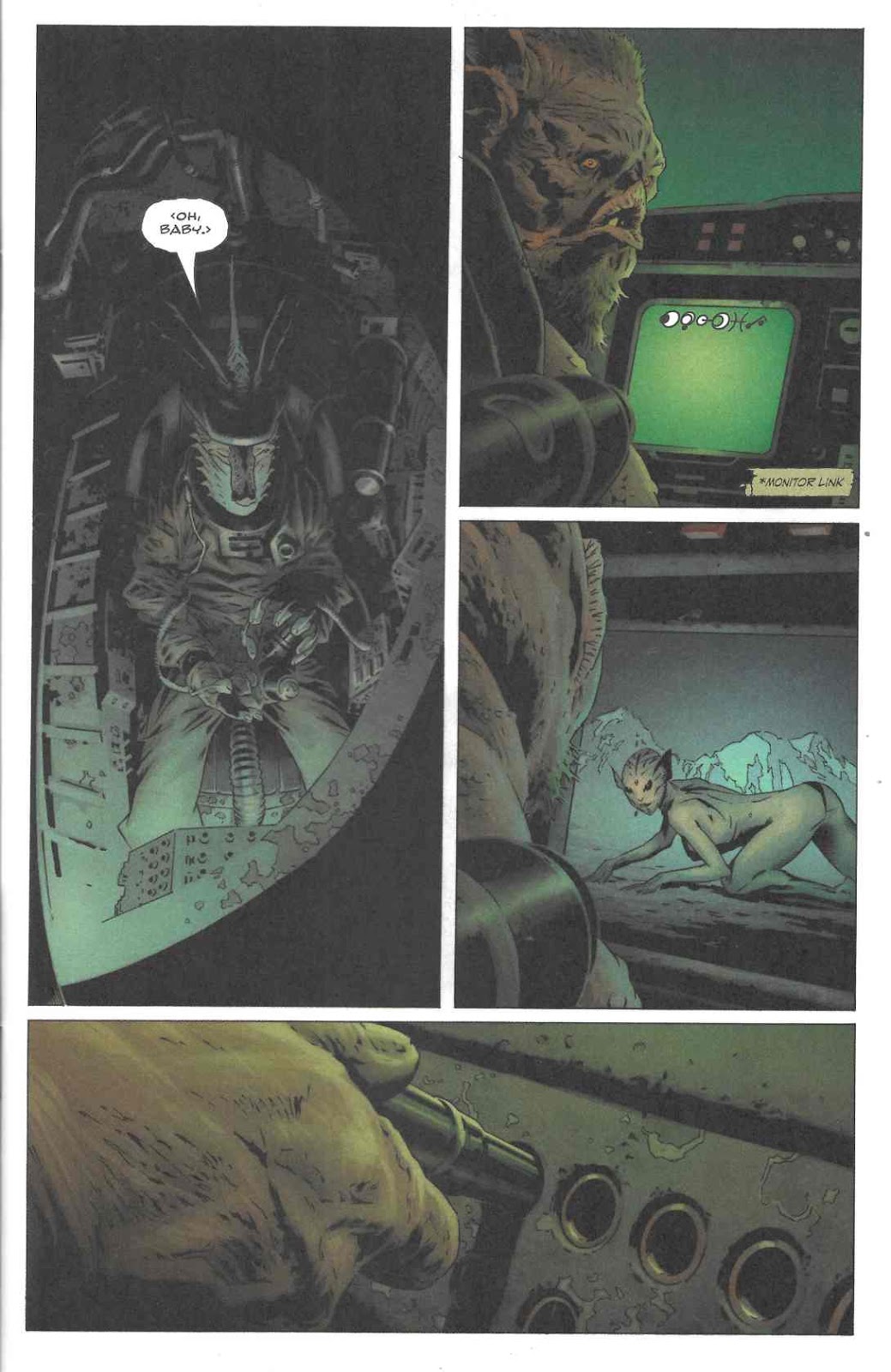 Turning the cat-person’s face into the view my house cat usually gives me every morning. The 3D anus proves to be a bit startling…but before the lovers can quarrel about this, there is an issue with the hitch on their tow. 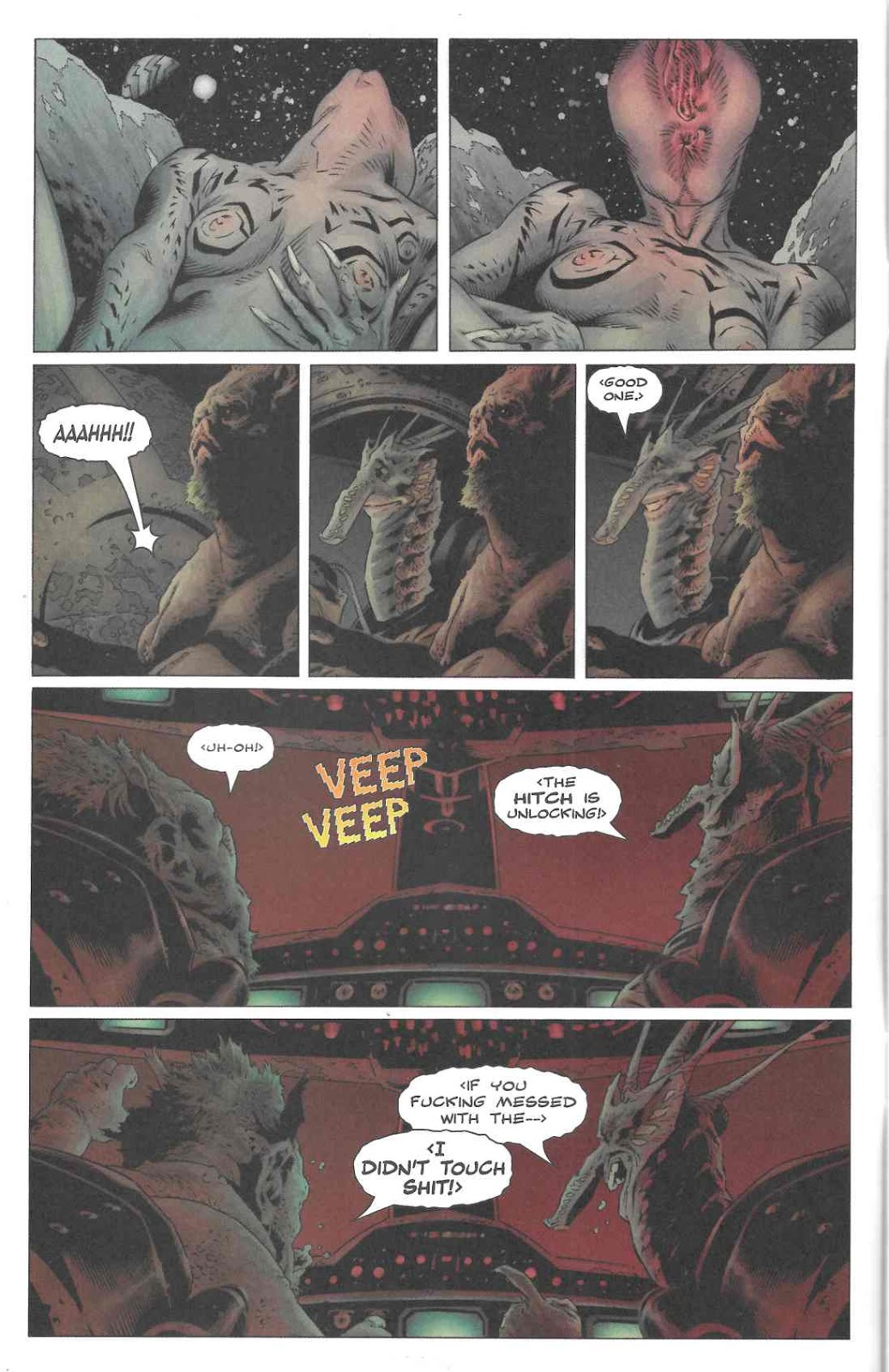 Things hit the fan pretty quickly from there on. The couple try to reestablish a tow, but… 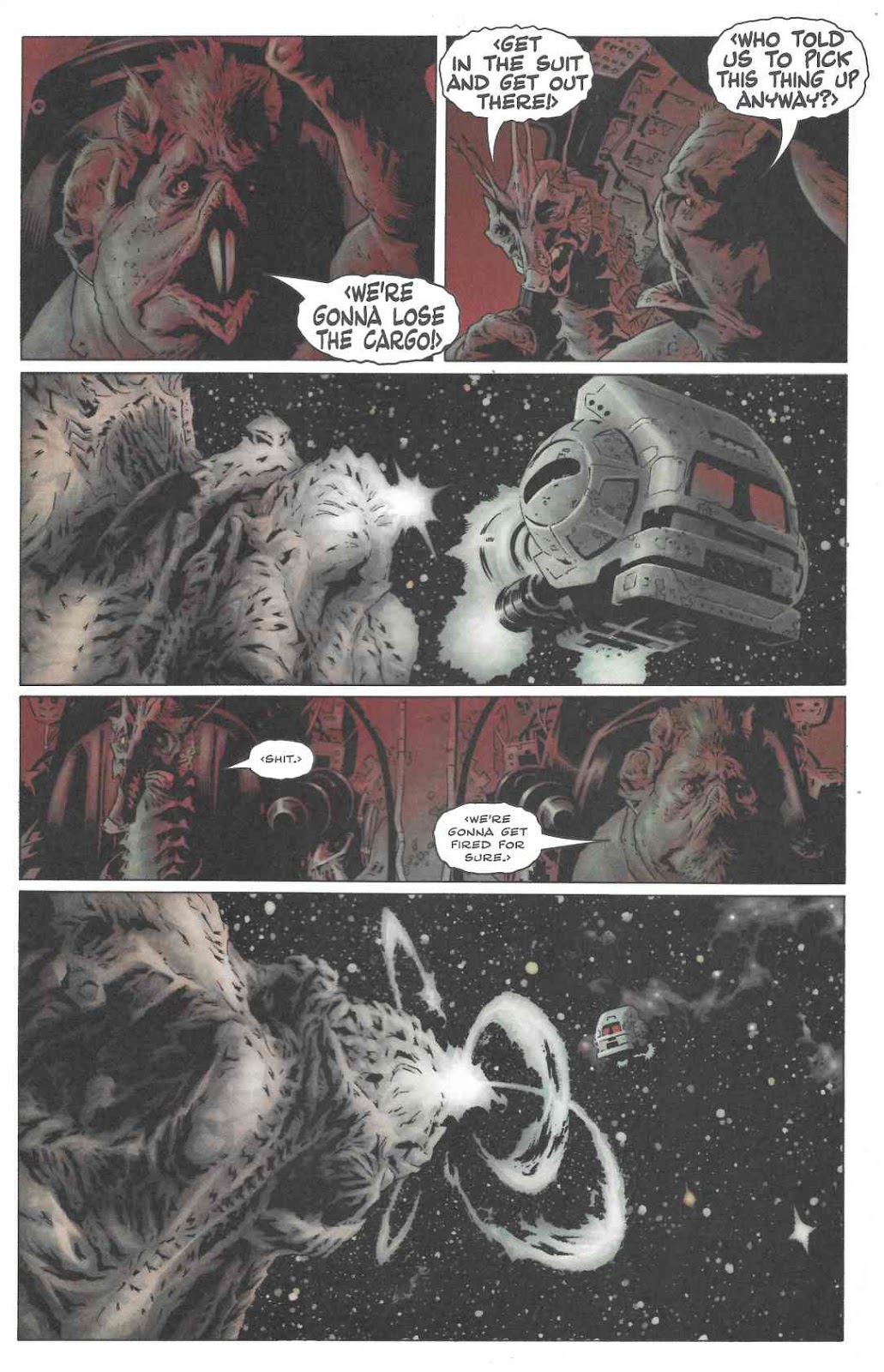 Instead end up in a fiery impact on the object’s surface. 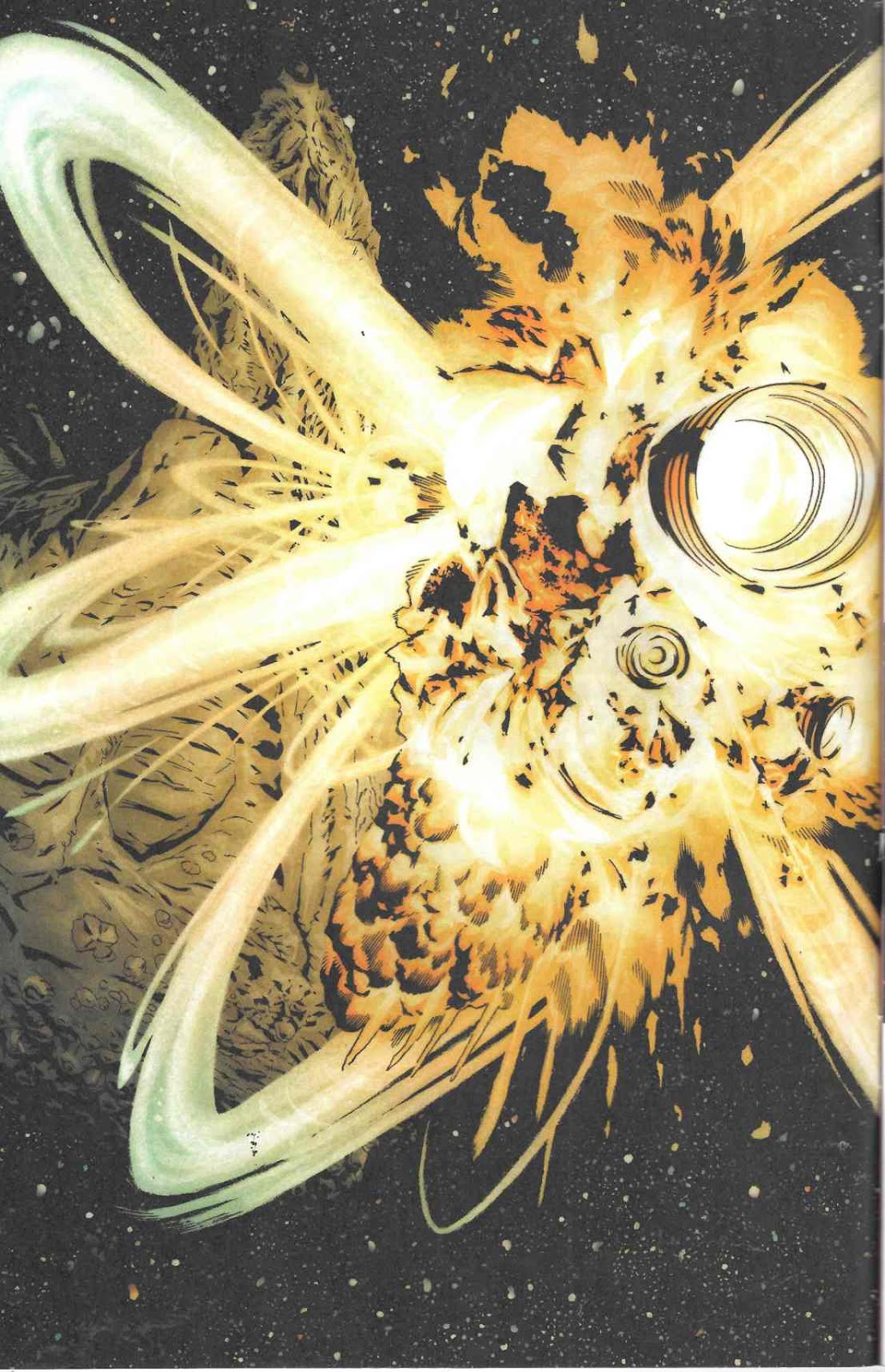 As our object tumbles through space, we turn to a bug that is sitting… 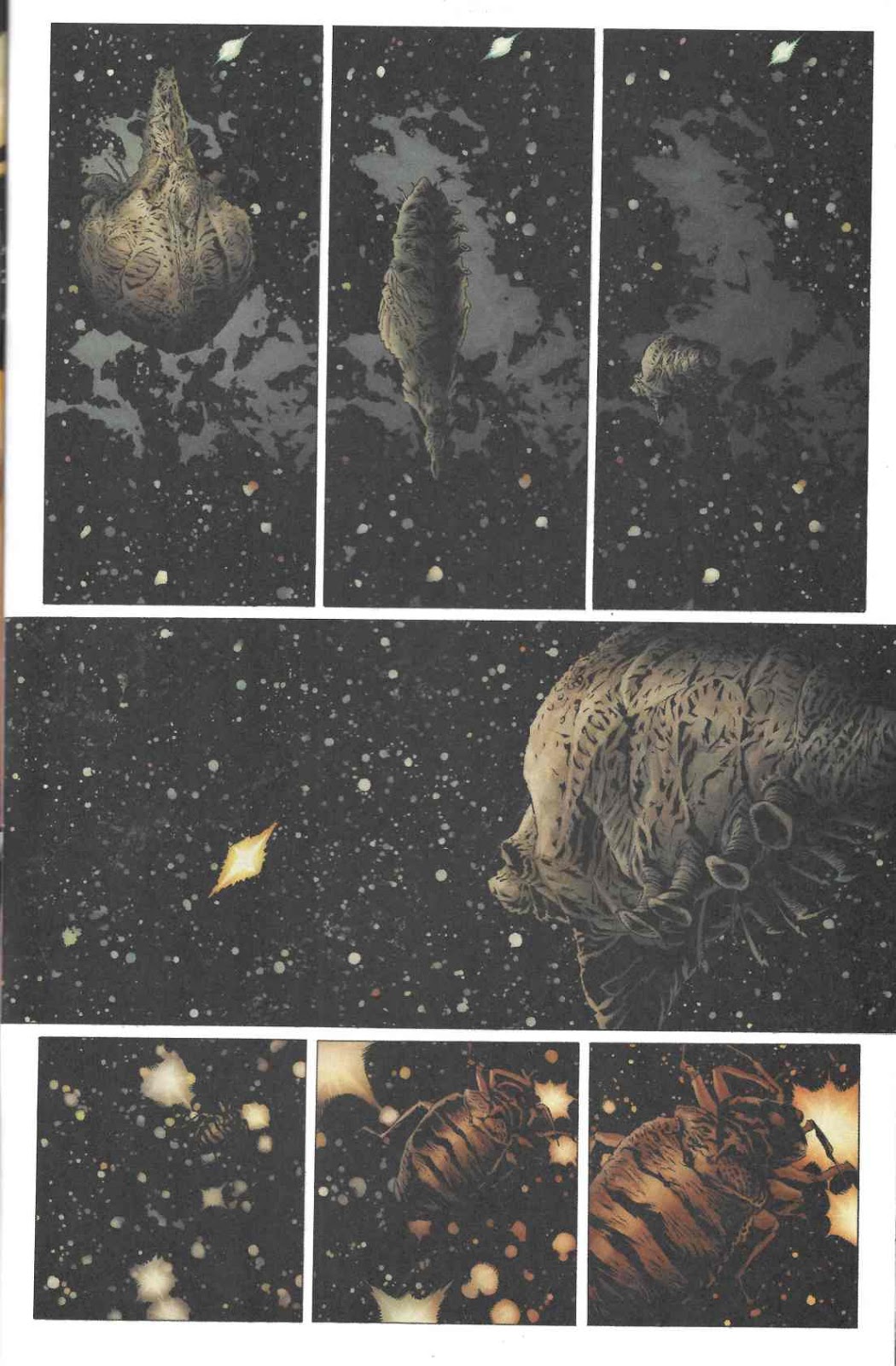 …on one of the last shots from the Hubble. Lucky for this research assistant, she notices the object we just saw get away from our space truckers and can extrapolate its path as heading to Earth. She notifies Dr. Wertham (and yes, I caught the reference)… 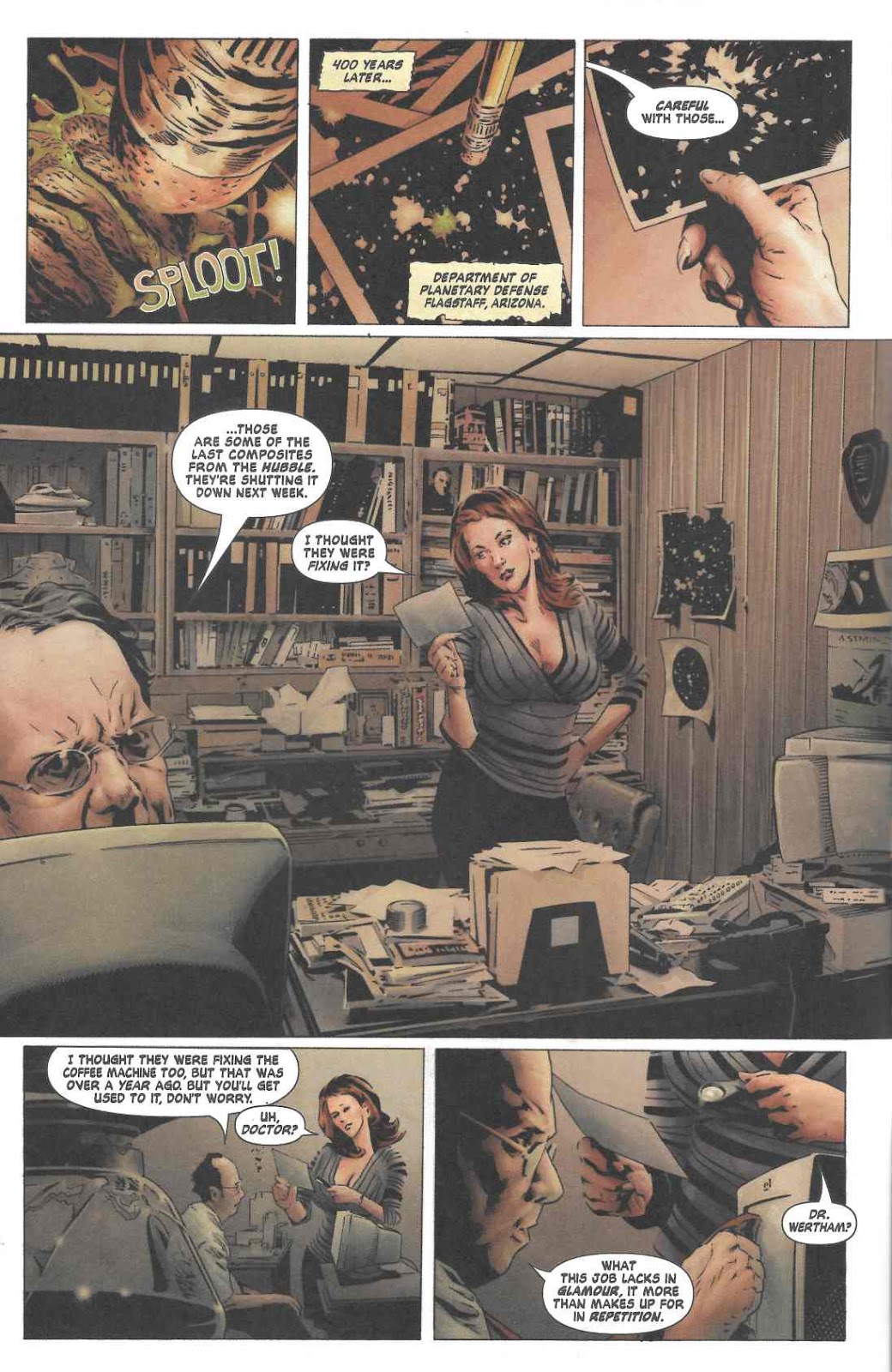 …and he tells a friend… 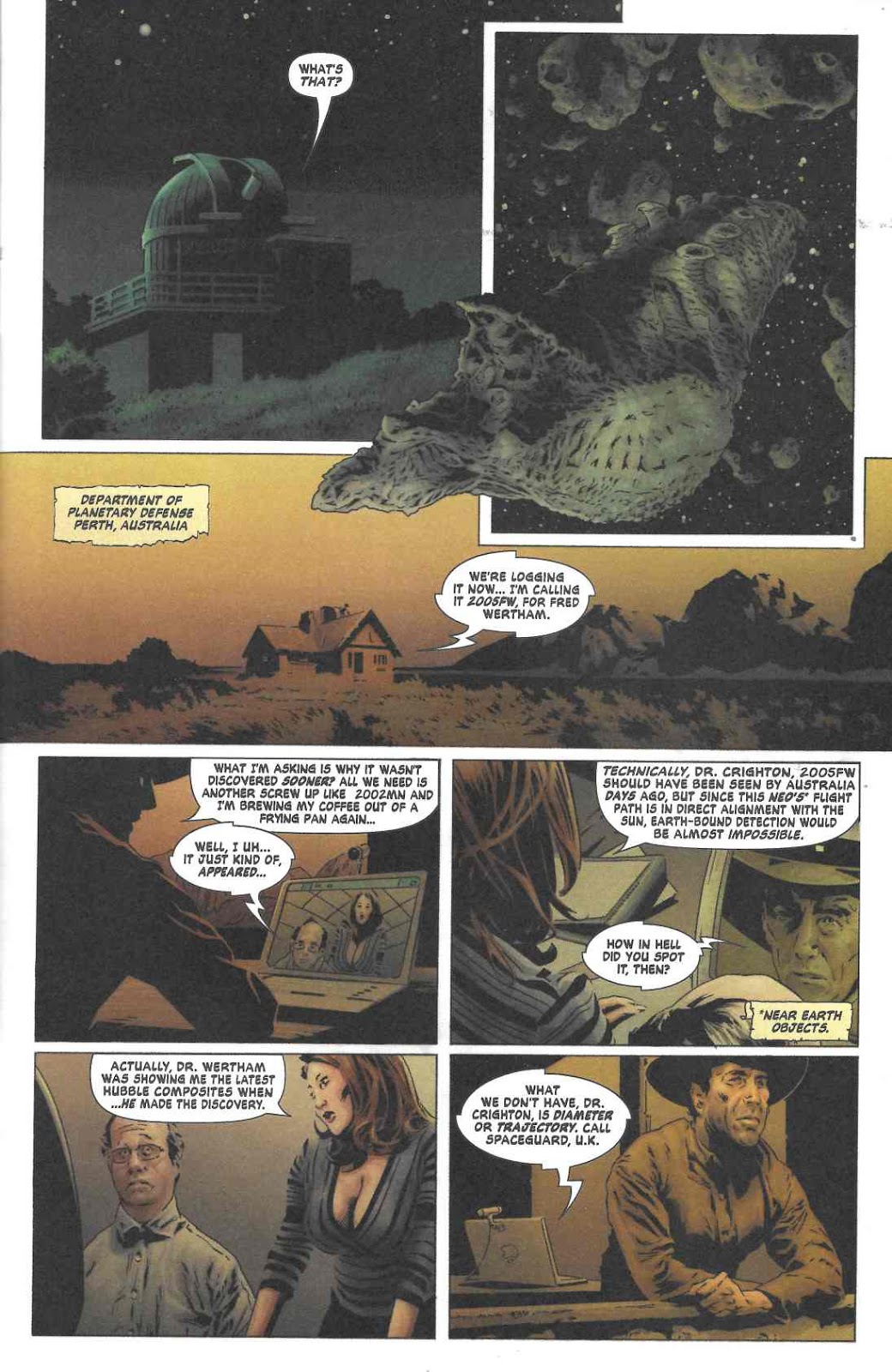 …who calls “Spaceguard” in the United Kingdom in to assist… 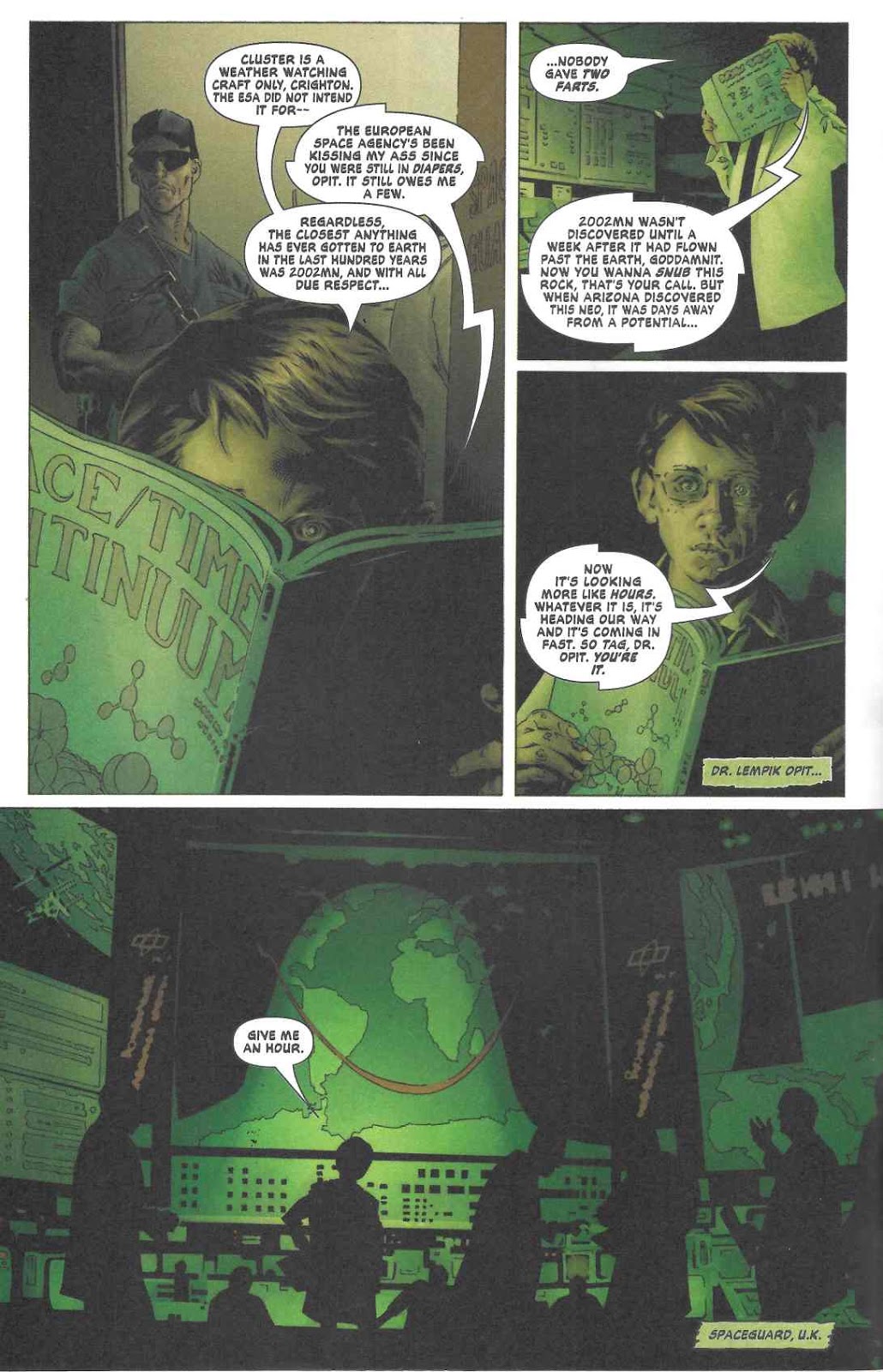 …in confirming if it will hit the Earth. There’s lots of talk about how indifferent we are to threats from space in the context of these conversations. I love it because of how it foreshadows the problems that I know are coming from this asteroid.

And there’s some neat tech jargon thrown in for good effect. There is such a thing as the Palermo scale… 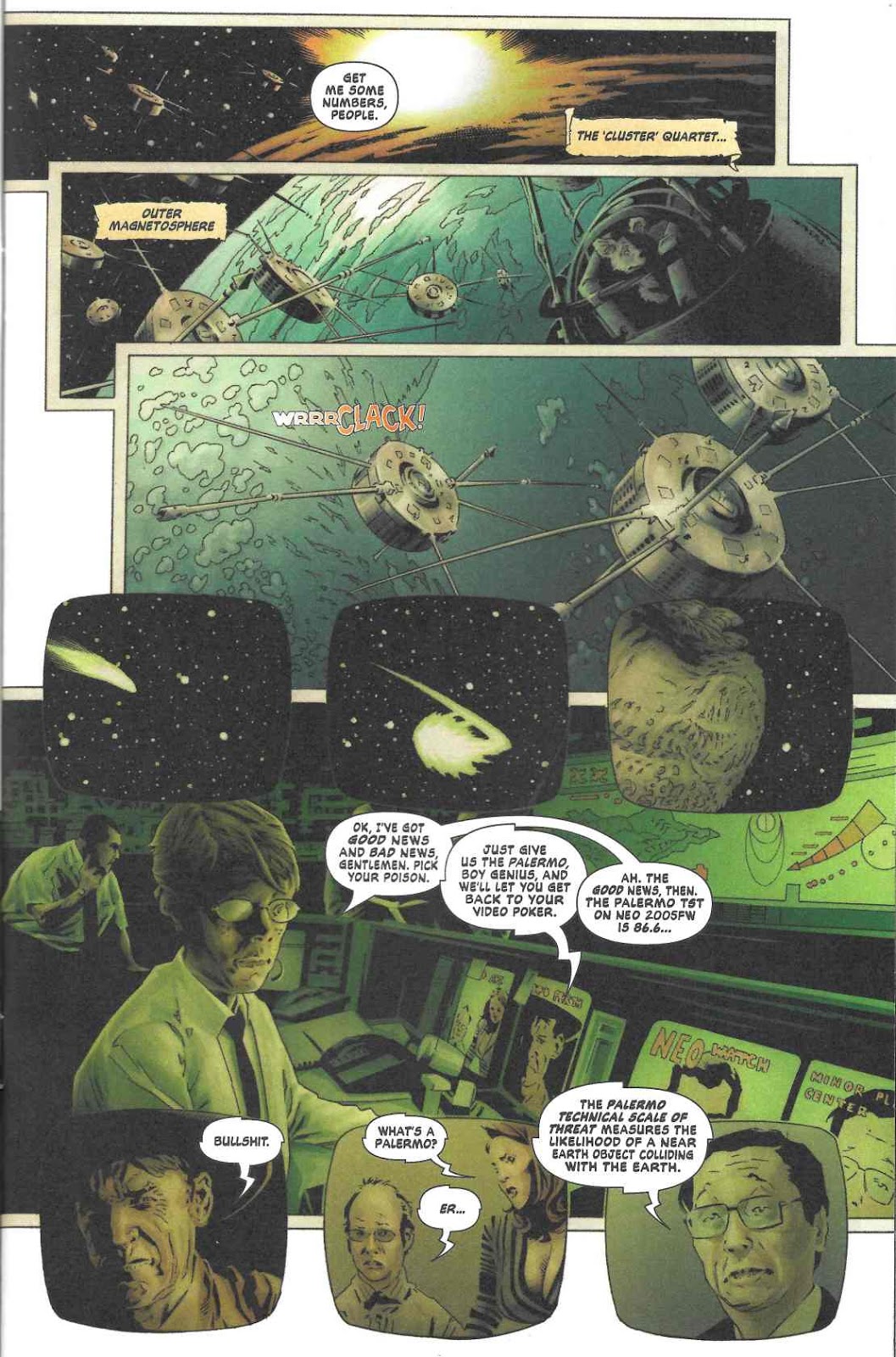 …which is a souped up version of the Torino scale. Torino says 0 is no impact, no problem and 10 is world devastation. Palermo makes those 1-10 numbers a bit more granular. If you care to care to learn about them, here’s a neat link.

Of course that probably won’t get you to where you need to be with this, unless you do logarithmic math as a hobby (no, I don’t. No one does.), so let’s let the story define for us what this means. 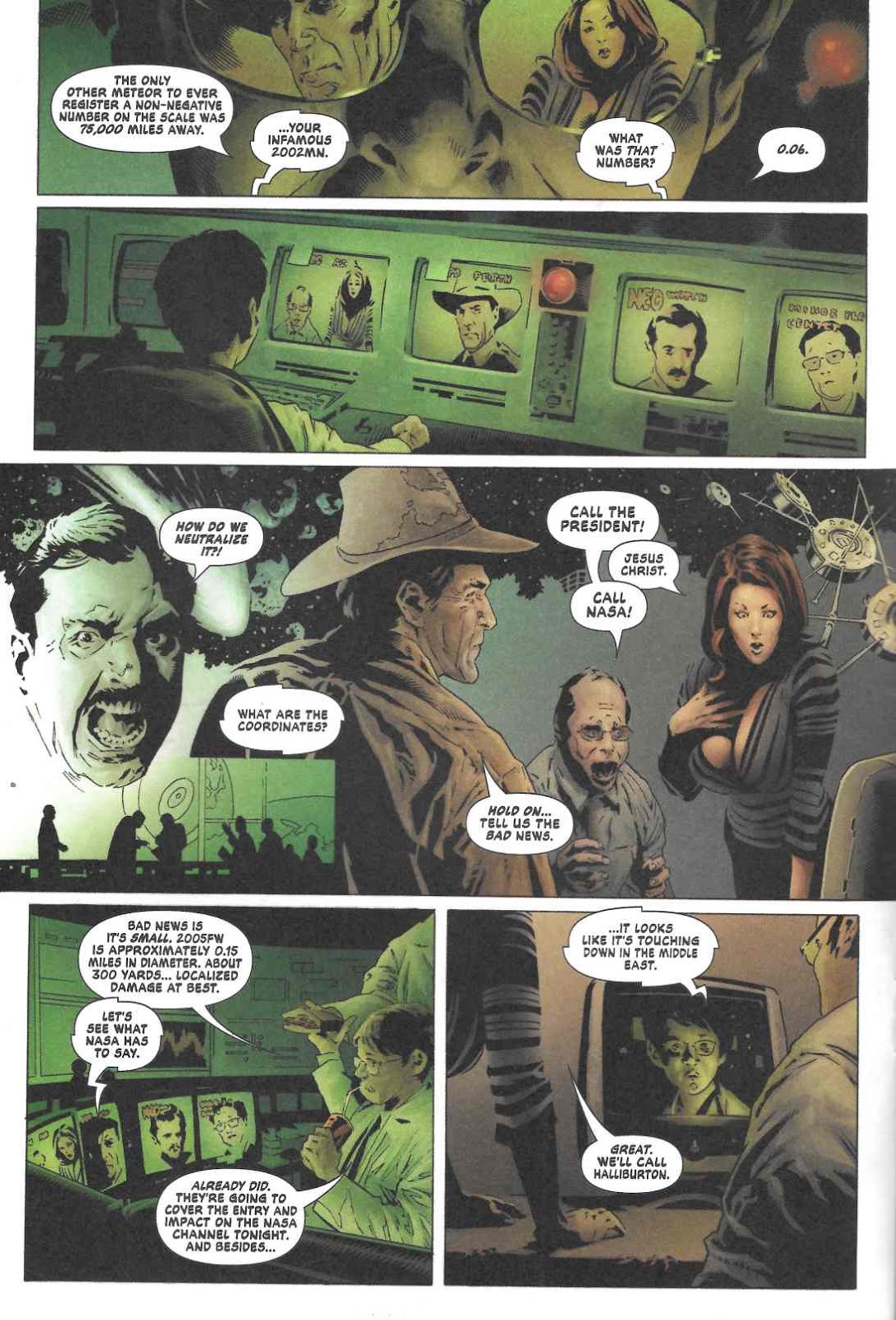 You expect Billy Bob Thornton to step on stage and say “Mr. President, it’s the size of Texas.” Or something. But no, this is a SMALL impact, but definitely one that will hit Earth. Destination: Middle-east. As if we needed more tension there. 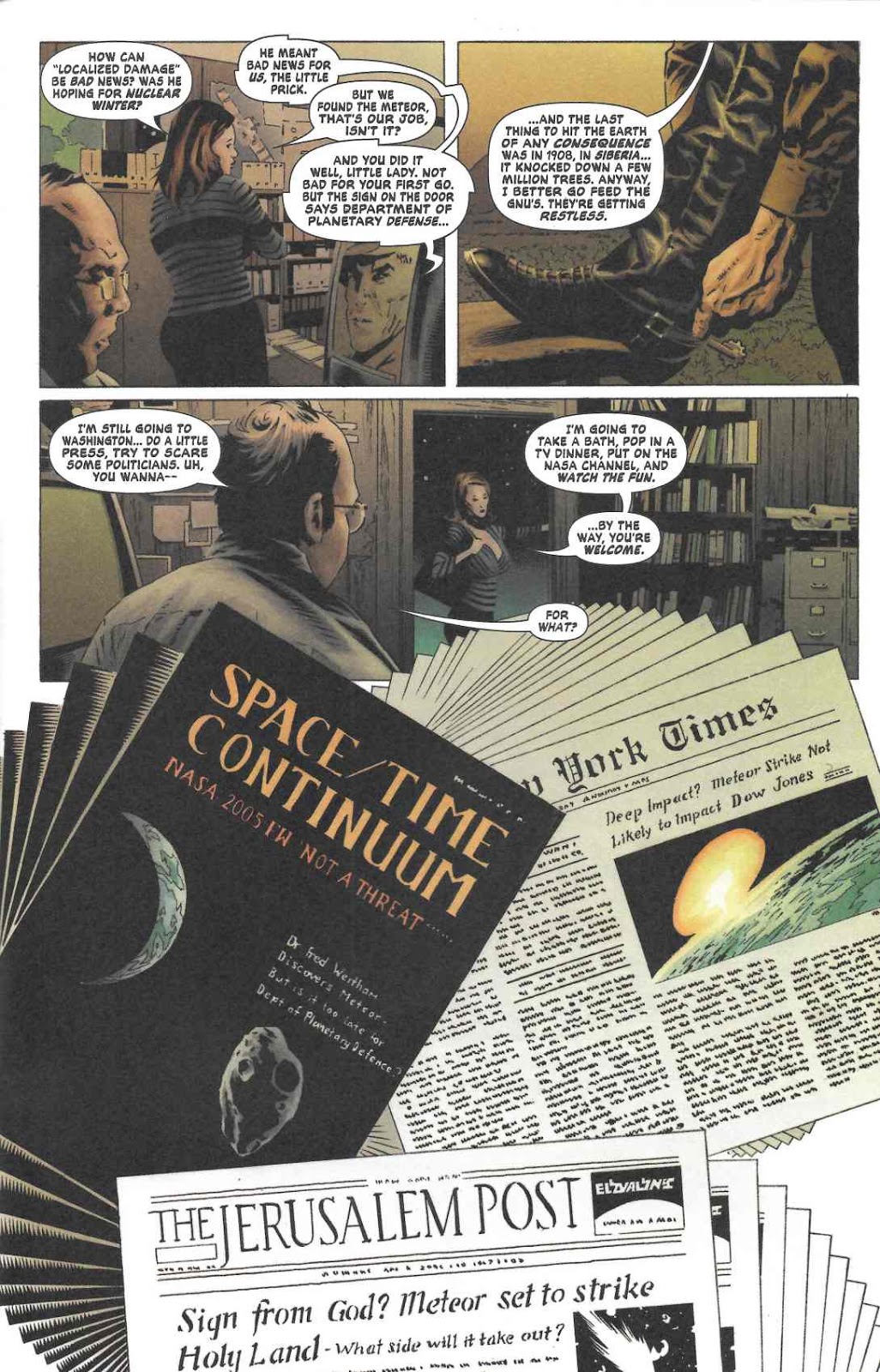 While our scientists / astronomers look to cash in on their 15 minutes of fame, for good purposes of course, something seems off about all this. Something that we aren’t aware of yet. 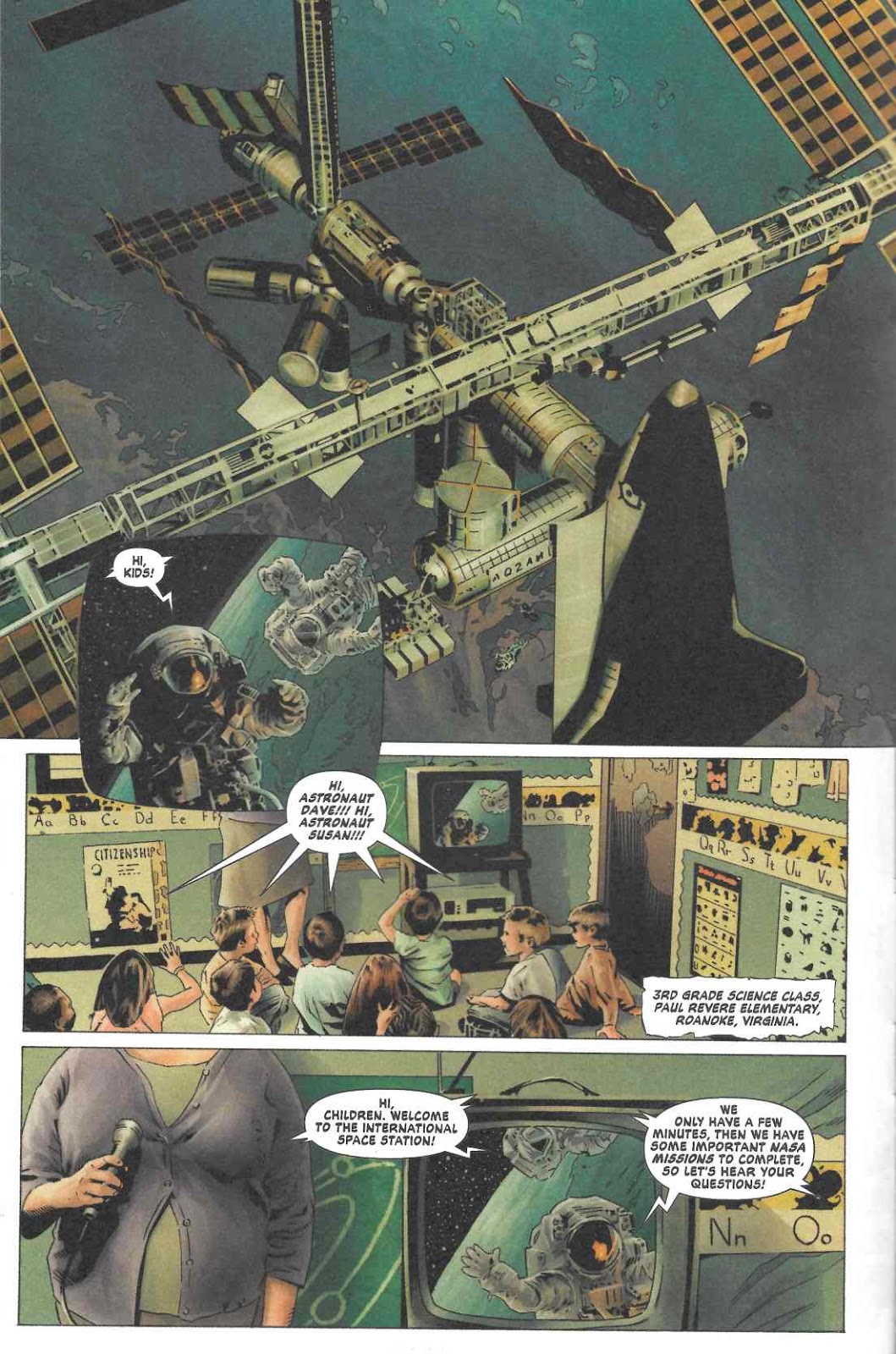 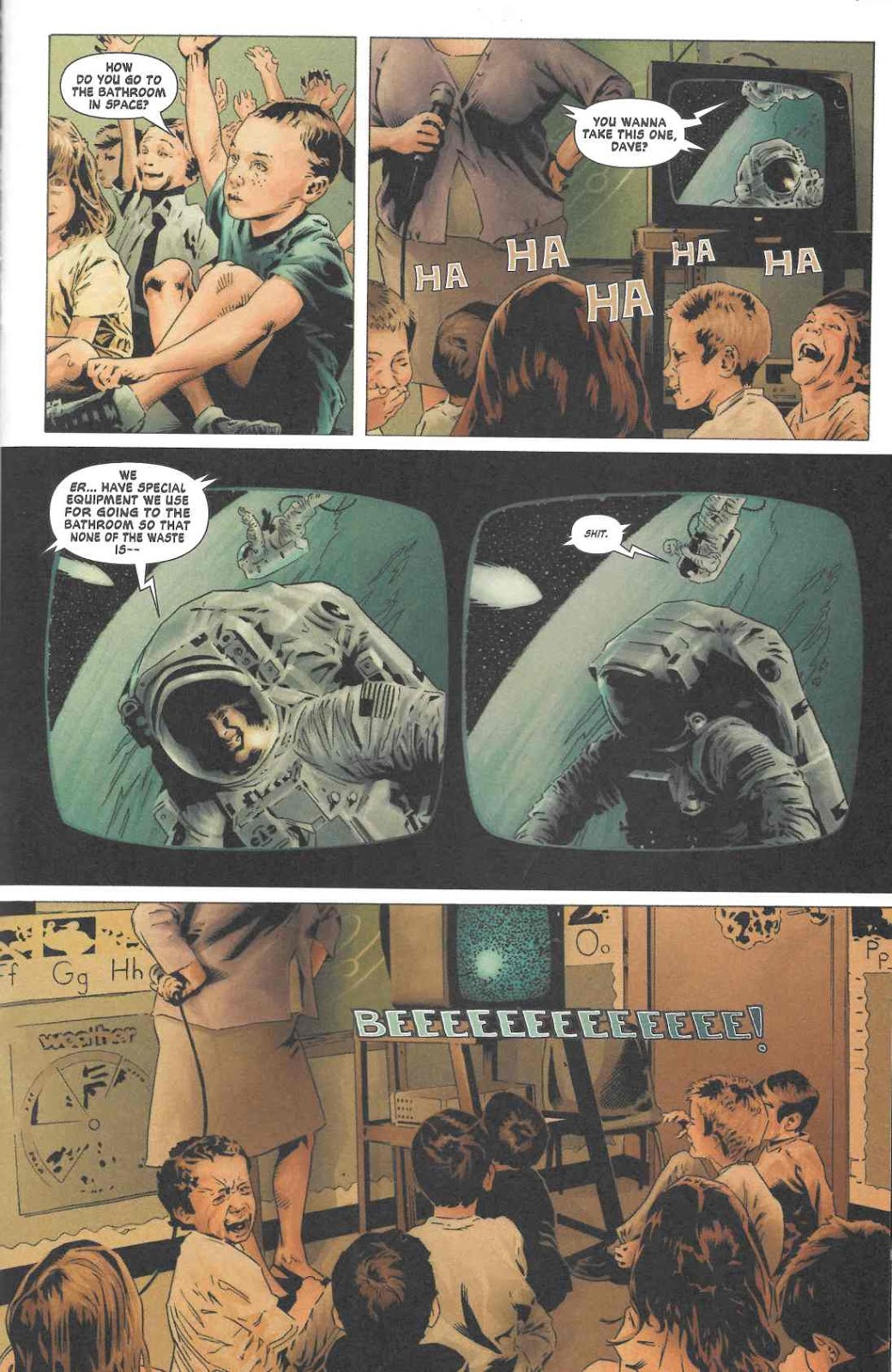 …when our new space rock makes a sudden course correction. A true Challenger moment is what this feels like. 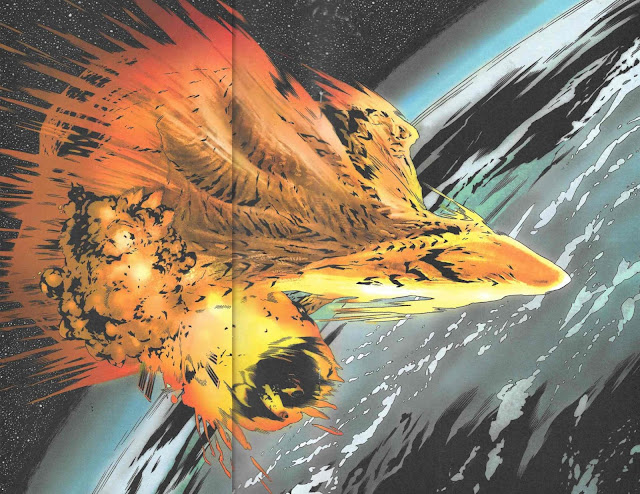 And it is rendered here as horrible as it is beautiful.

What this means is where the asteroid is headed is anyone’s guess, it could even drift toward the U.S. of A. No one is safely out of the impact zone. 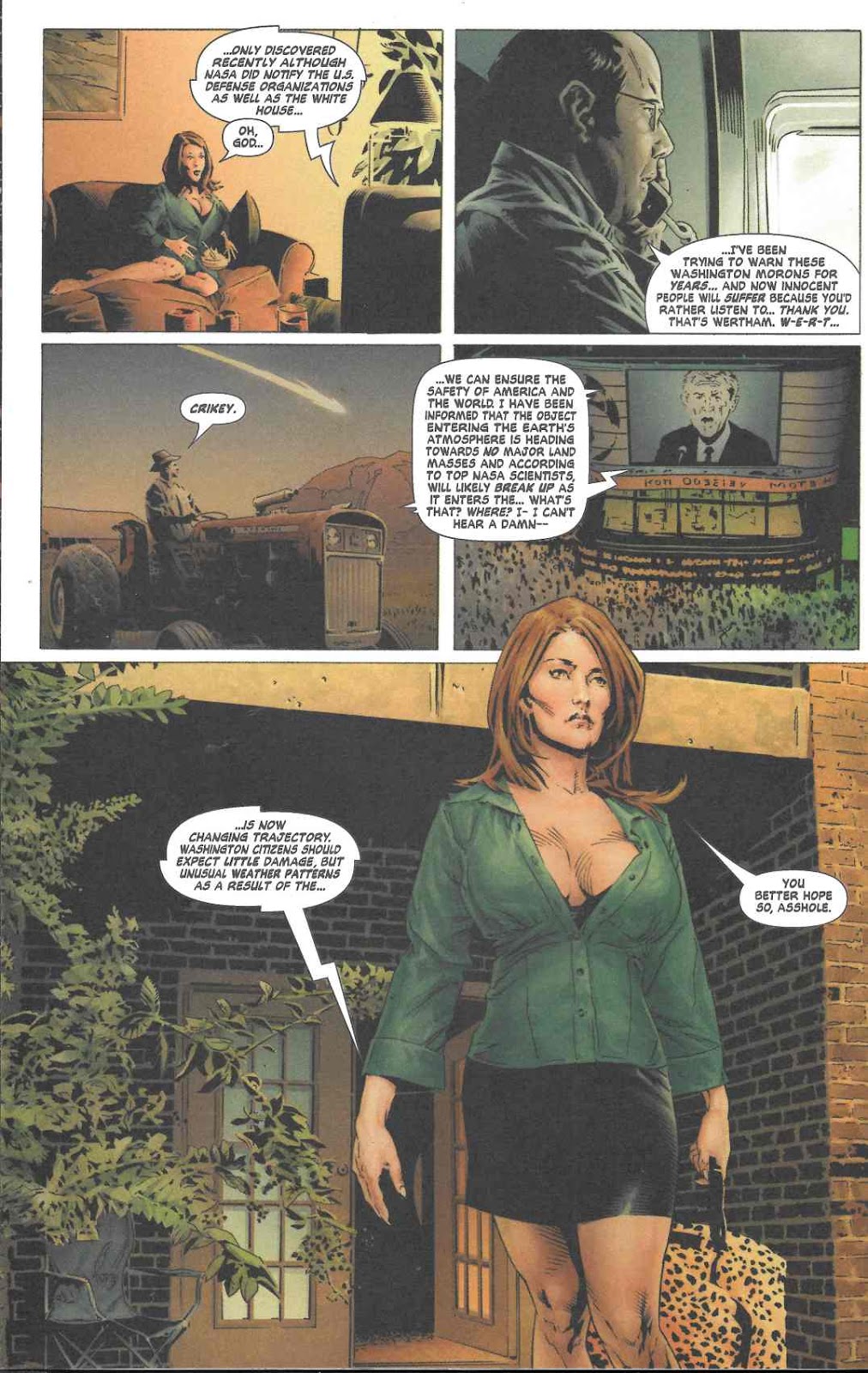 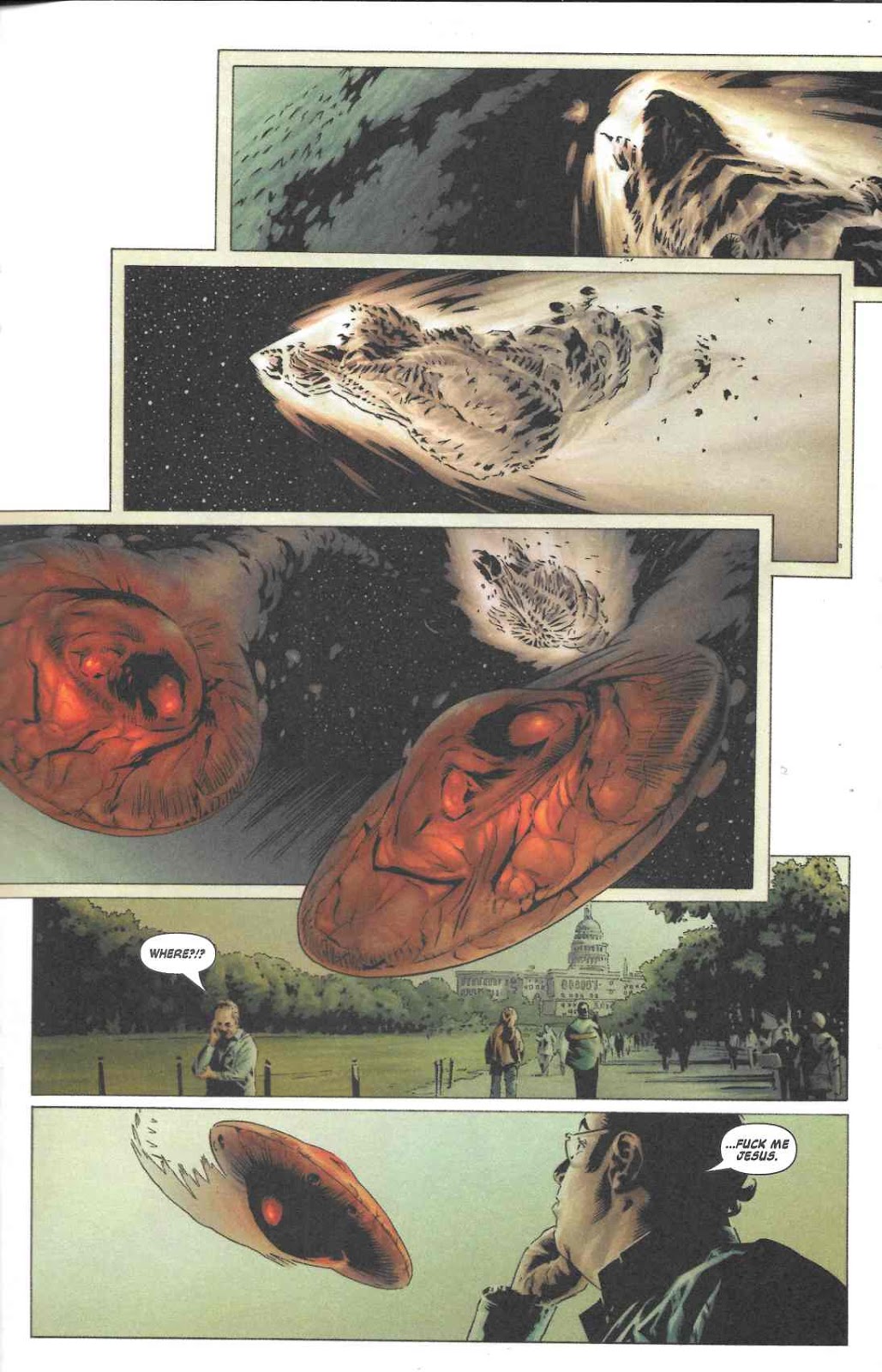 And a place I’d have to look up in Africa… 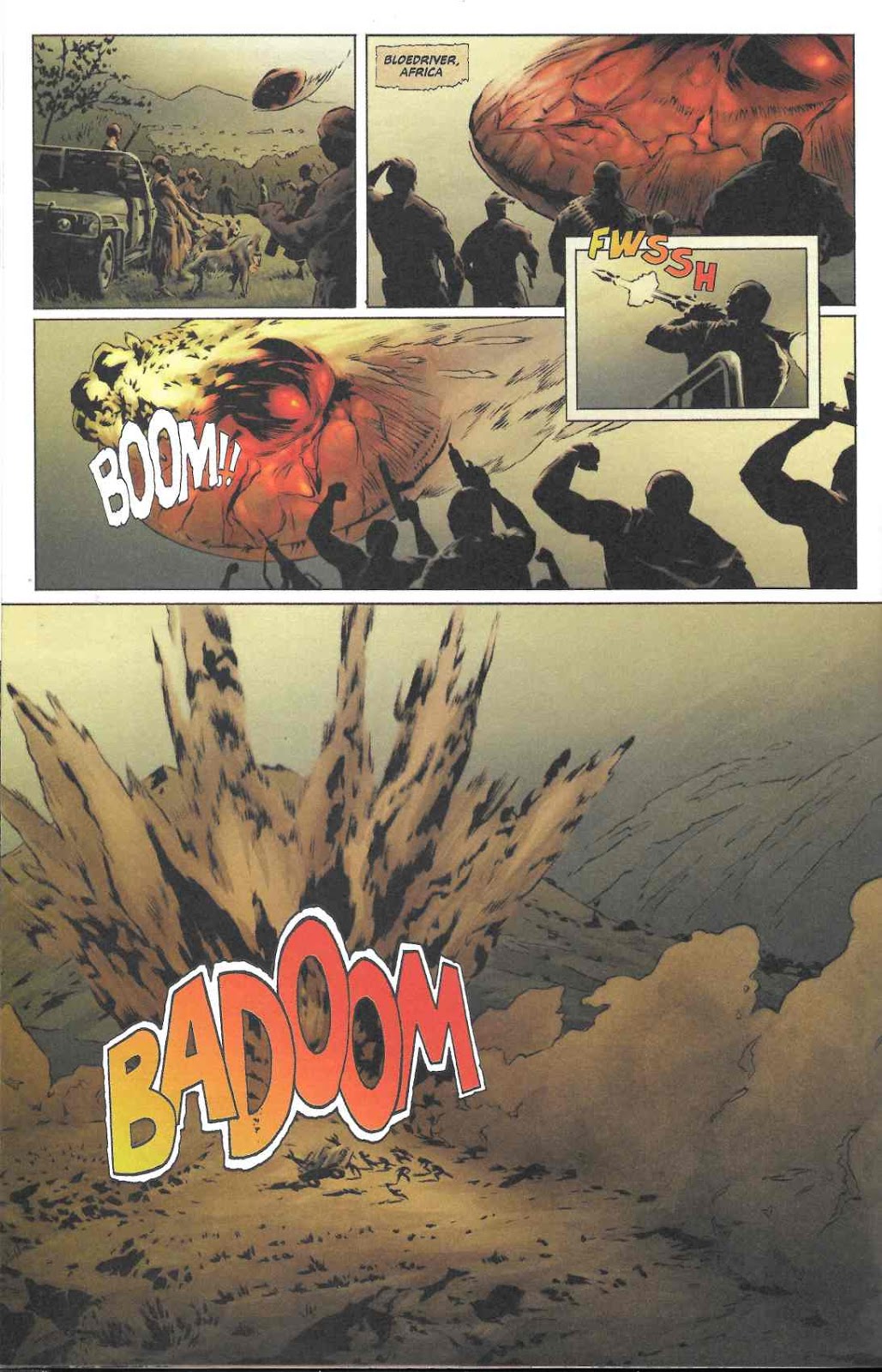 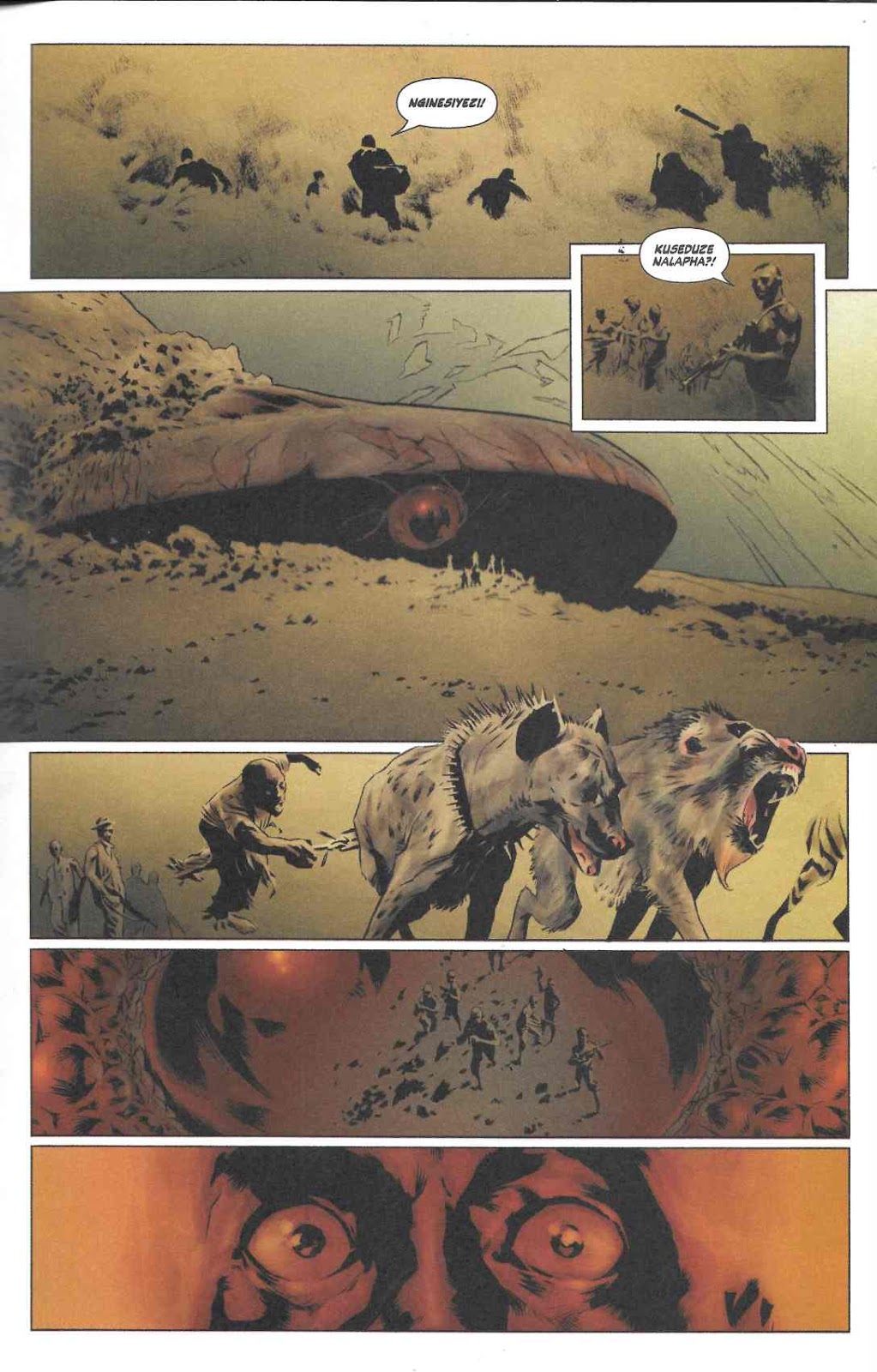 …in fact, cracking its shell has only allowed the worst parts of the saucer’s contents to come spilling right out. 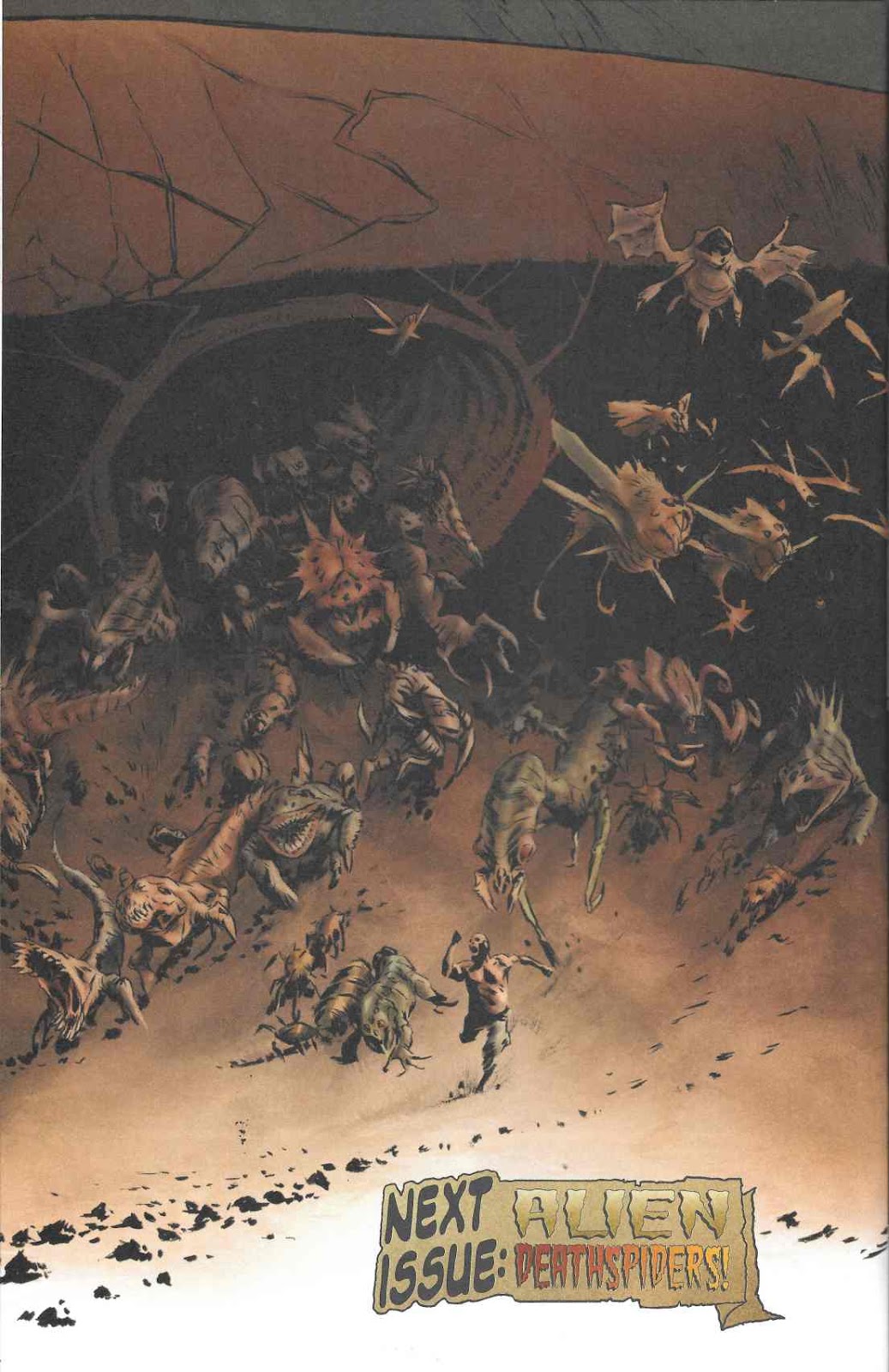 What does this portend for the fate of the Earth? How does it relate to the bad-ass, axe-wielding alien on the cover of the book? All of these questions would be answered in future issues, I am assured. As I told you, this one was a slow burn. But I trust the hands of those passing it to us. 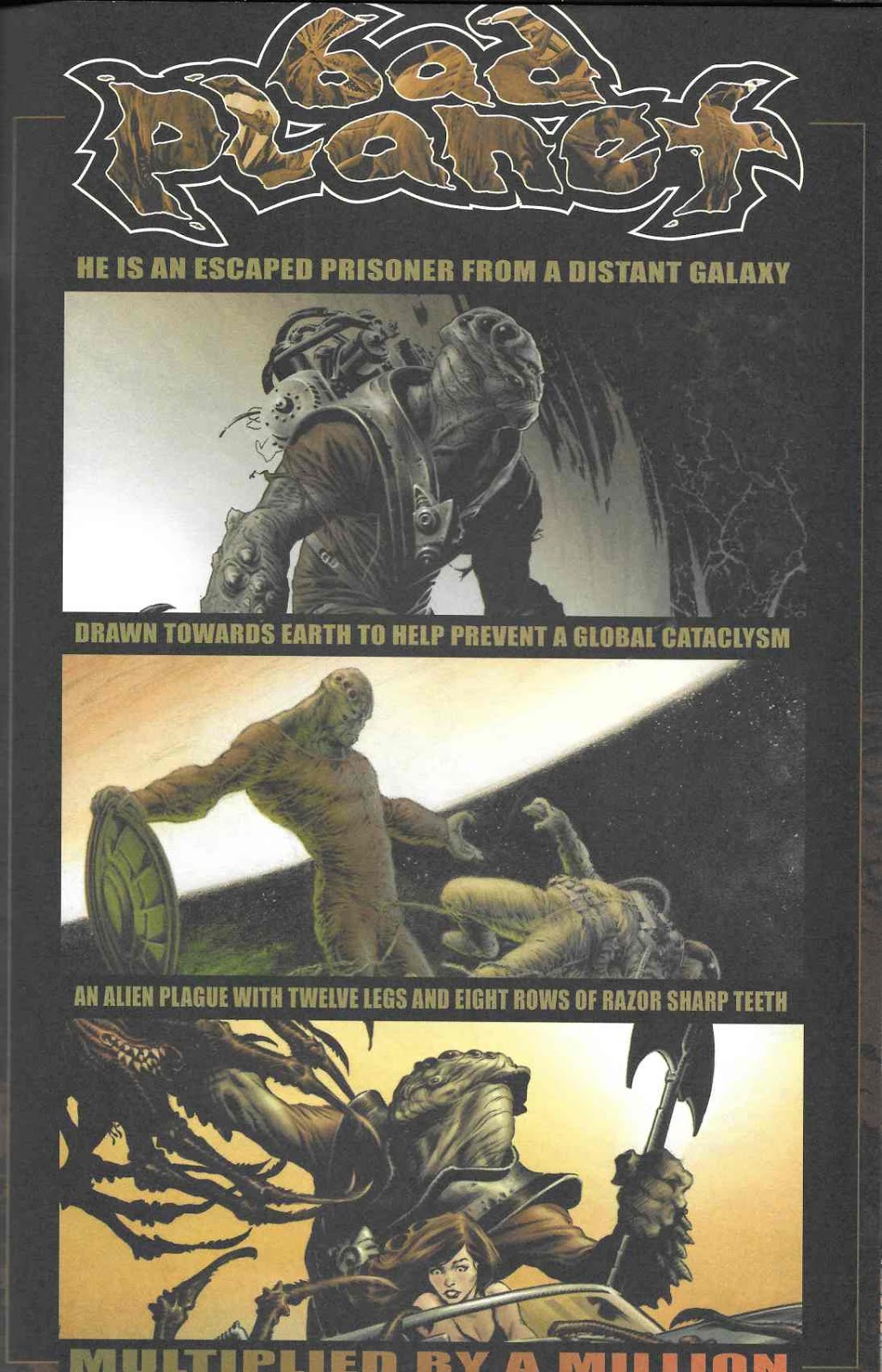 Plus everyone loves a good Critters remake, right? Well, I do at any rate.
Posted by SonOfCthulhu at 5:38 AM