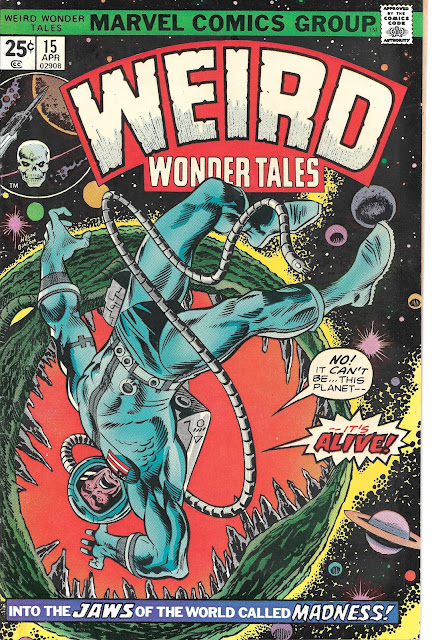 A trio of tales twice told

Weird Wonder Tales was one of several horror-based reprint titles launched in the 1970’s by a Marvel Company looking to cash in on previously published stories. The book began as pure science fiction tales, but after issue 6 became another horror story vehicle with the emphasis on sci-fi/horror blends. Beginning in number 19 the book also added a single superhero tale, reprinting old Dr. Droom stories but retitling the character as Dr. Druid. Books like this were extremely popular as Marvel didn’t pay artists or writers when they reprinted their material so the stories were free making the books highly profitable. Weird Wonder Tales ended with issue number 22.

"The Man Who Owned the World”

We begin with this Sutton/O’Neil gem from Chamber of Darkness #4, April 1970. The charm of these old-school tales lies in the way that each story is introduced with a frontispiece showing its defining twist. Here we have the greedy multi-billionaire industrialist Gregory Irkadin as he pushes aside common sense in search of immortality. 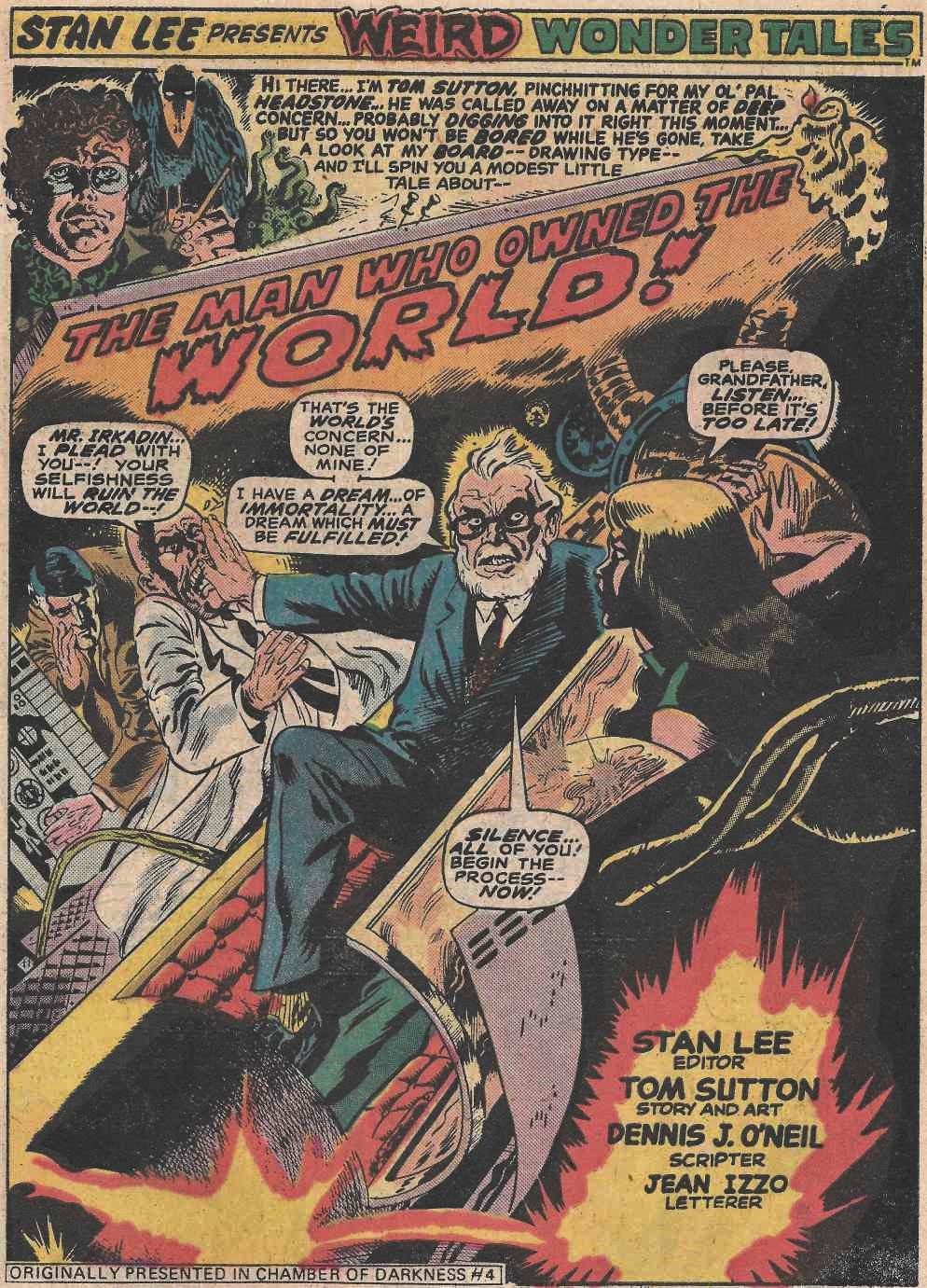 And turning the page, we start our tale proper. In one page we have the setup: Gregory Irkadin wants to be frozen so he can live in the future. This brilliant scientist is working to save all of humanity from a global climate change-type disaster. And Irkadin’s comely daughter acts to ensure the doctor will help Irkadin by paying the doctor handsomely for his services. 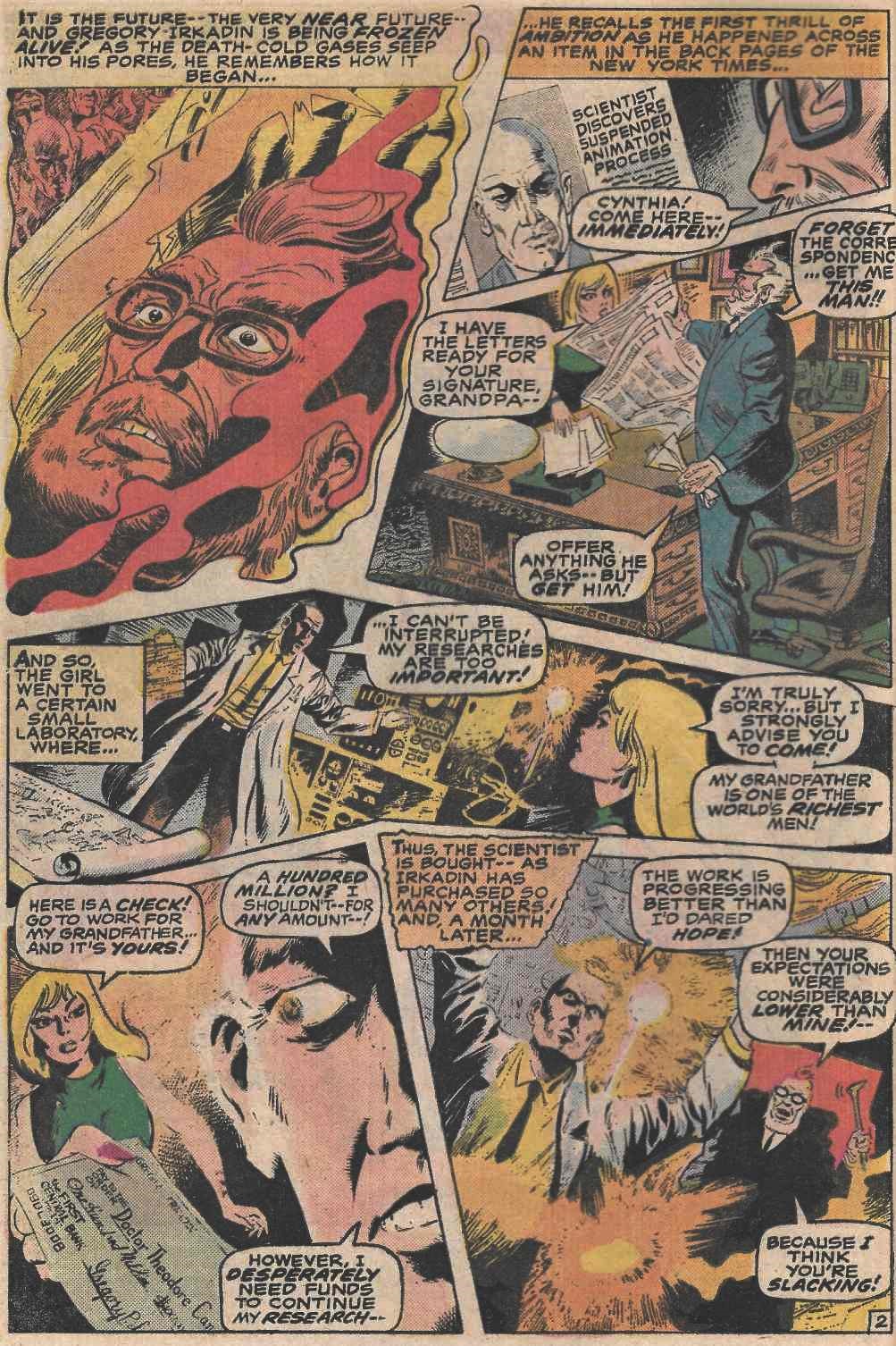 It’s easy to see why audiences would dig these reprint stories. Even though this one was less than seven years old, it feels as timeless as a great Twilight Zone tale. The art style is dramatic and bold. The pacing is brisk yet easy to follow. If there is one drawback, it is that all three of these tales whiz by so fast that you hardly feel like you’ve read anything at all.

Getting back to our story at hand, Irkadin demands faster results while ignoring the scientist’s dire warnings about the planet Earth loosing its atmosphere. Instead his relentless drive to fulfill his mad dream has him liquidating his holdings and throwing global markets into a tailspin. Irkadin feels a lot like our current crop of corporate bigwigs. I feel they also are fiddling while Rome burns. 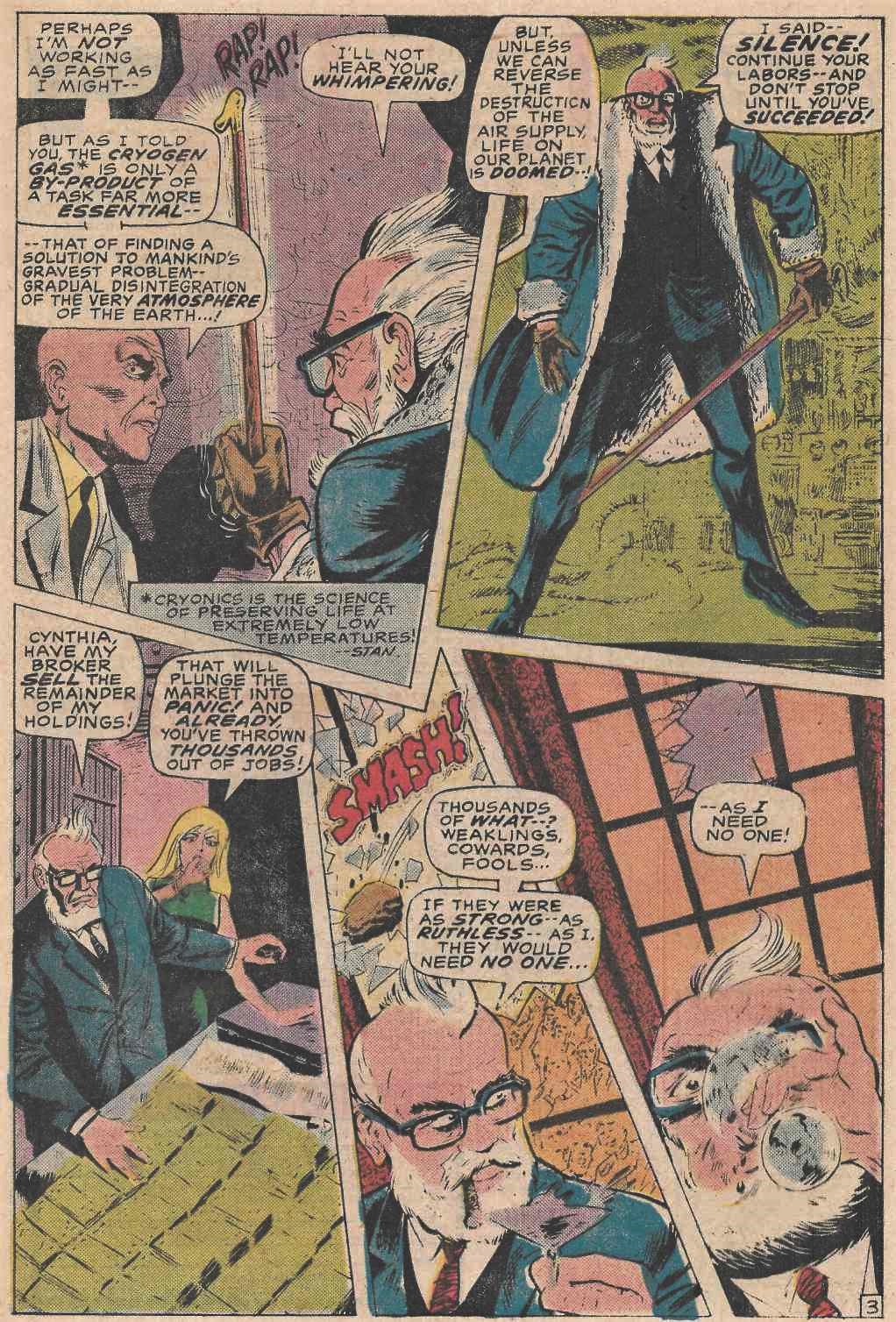 Irkadin doesn’t care. His drive is to own the entire world and as we soon shall see, that is exactly what he will get. The day fast arrives and all his preparations are in place. The scientist has the sleep chamber ready and Irkadin makes sure that no one will be able to duplicate his endeavor. 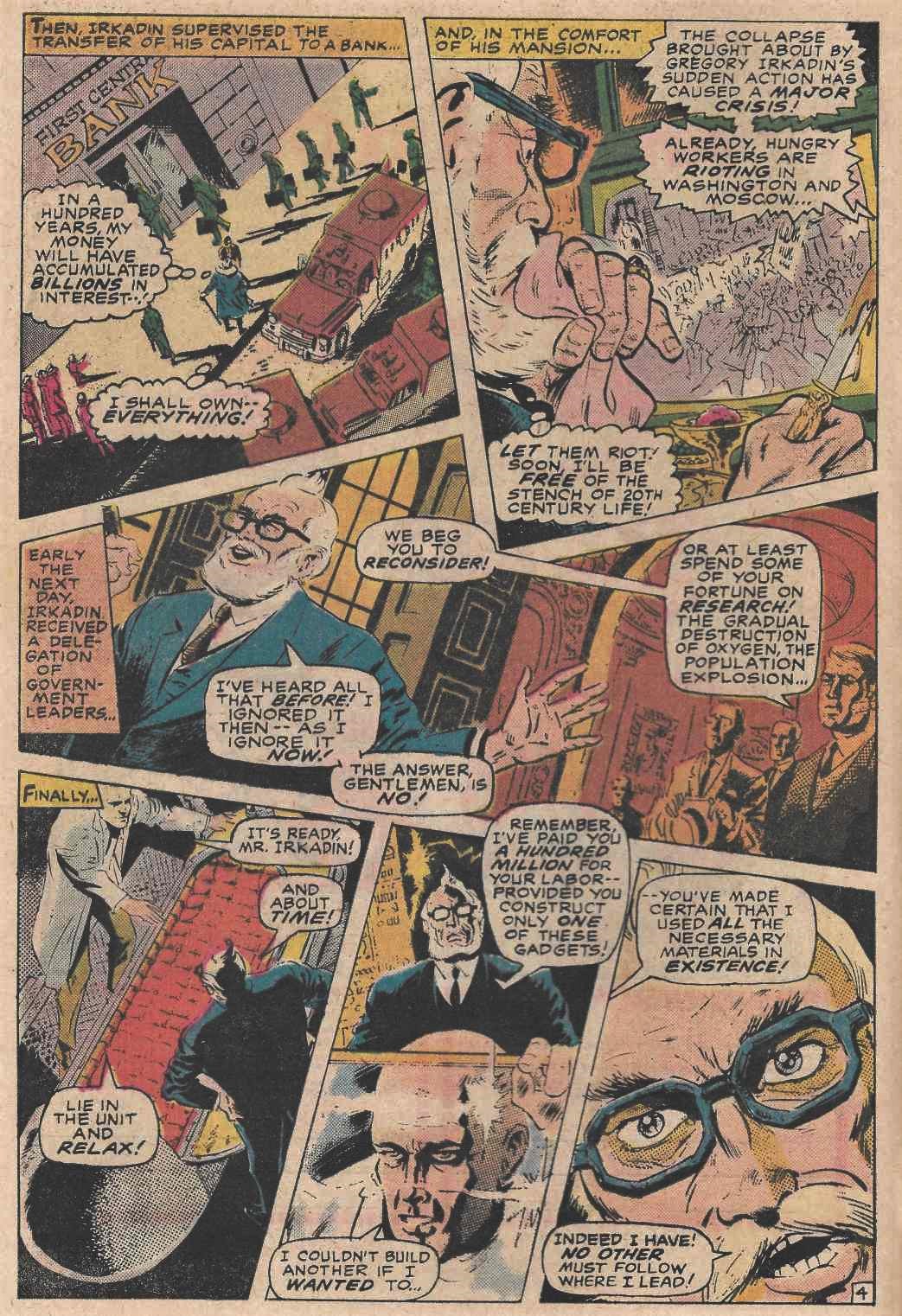 And more hints: Irkadin’s final payment will finance the world’s salvation as the billionaire settles in for his centuries-long sleep. 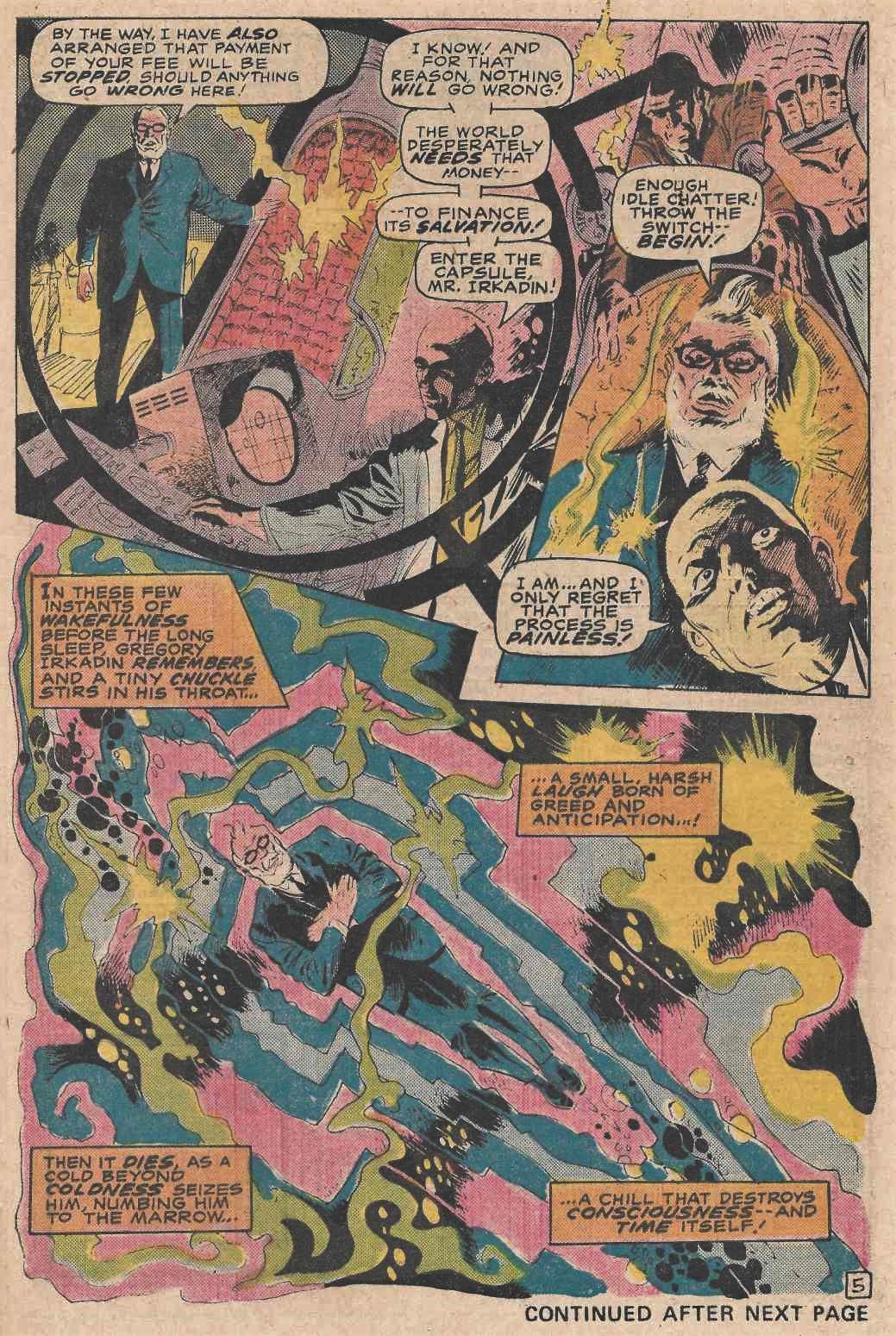 As Irkadin emerges he revels in his accomplishments. His long sought goal of owning everything is just on the other side of this door and up this tunnel. Pity that as he climbs he fails to understand the significance of the thinness of the air… 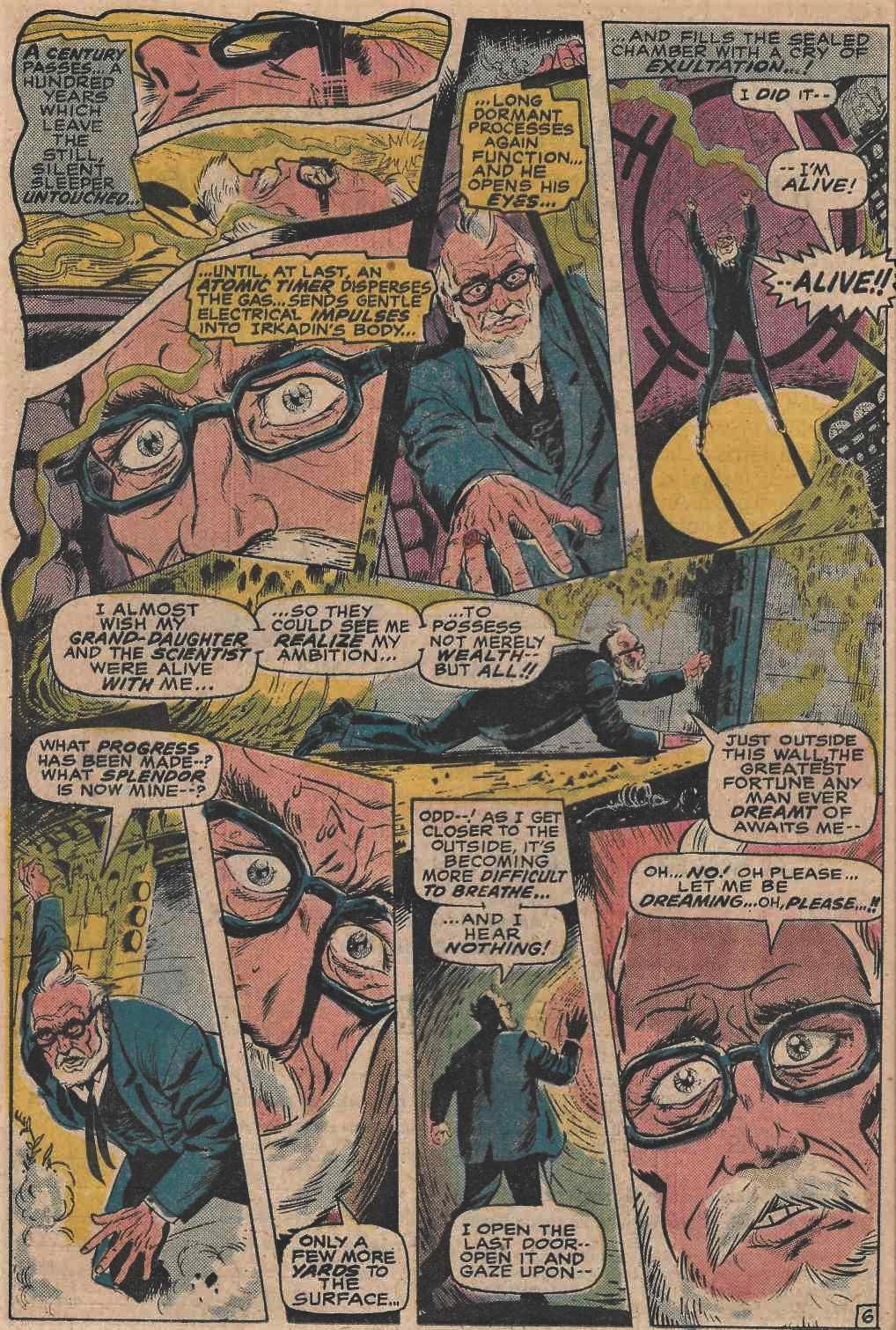 …and with his last steps he comes to the surface of a dead world, a world left abandoned by all who once populated it. Earth’s inhabitants have fled to the stars. Irkadin owns the world, but in the words of Sting “…what good is a used up world and how could it be worth having?” 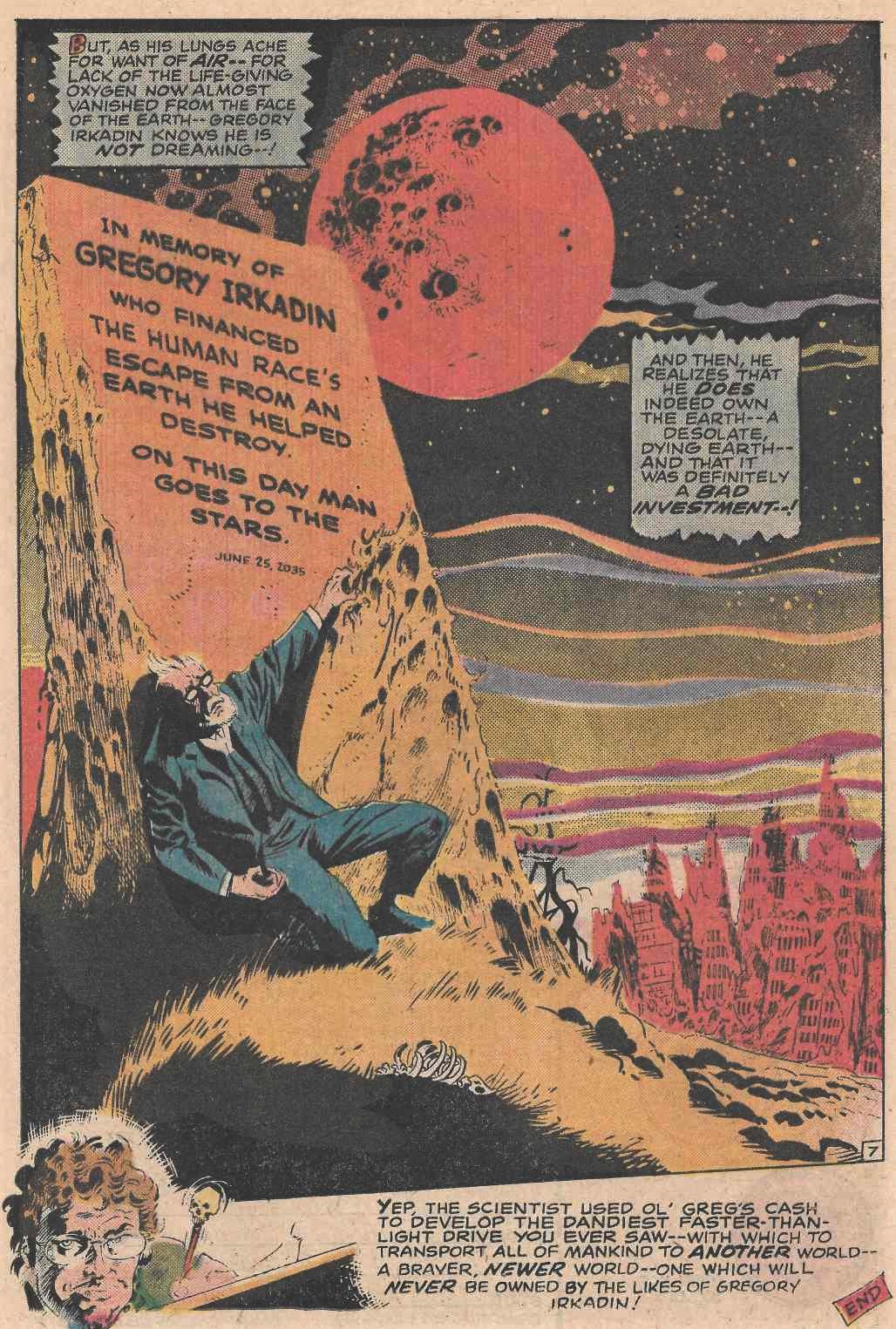 Next up is this little ditty from either Lee or brother Lieber from Strange Tales #95, April 1962. You can tell this is more by-the-numbers art framing, but the predictable twist is still a fun one to watch unfold and Lee/Lieber/Heck have a grand time showing us. 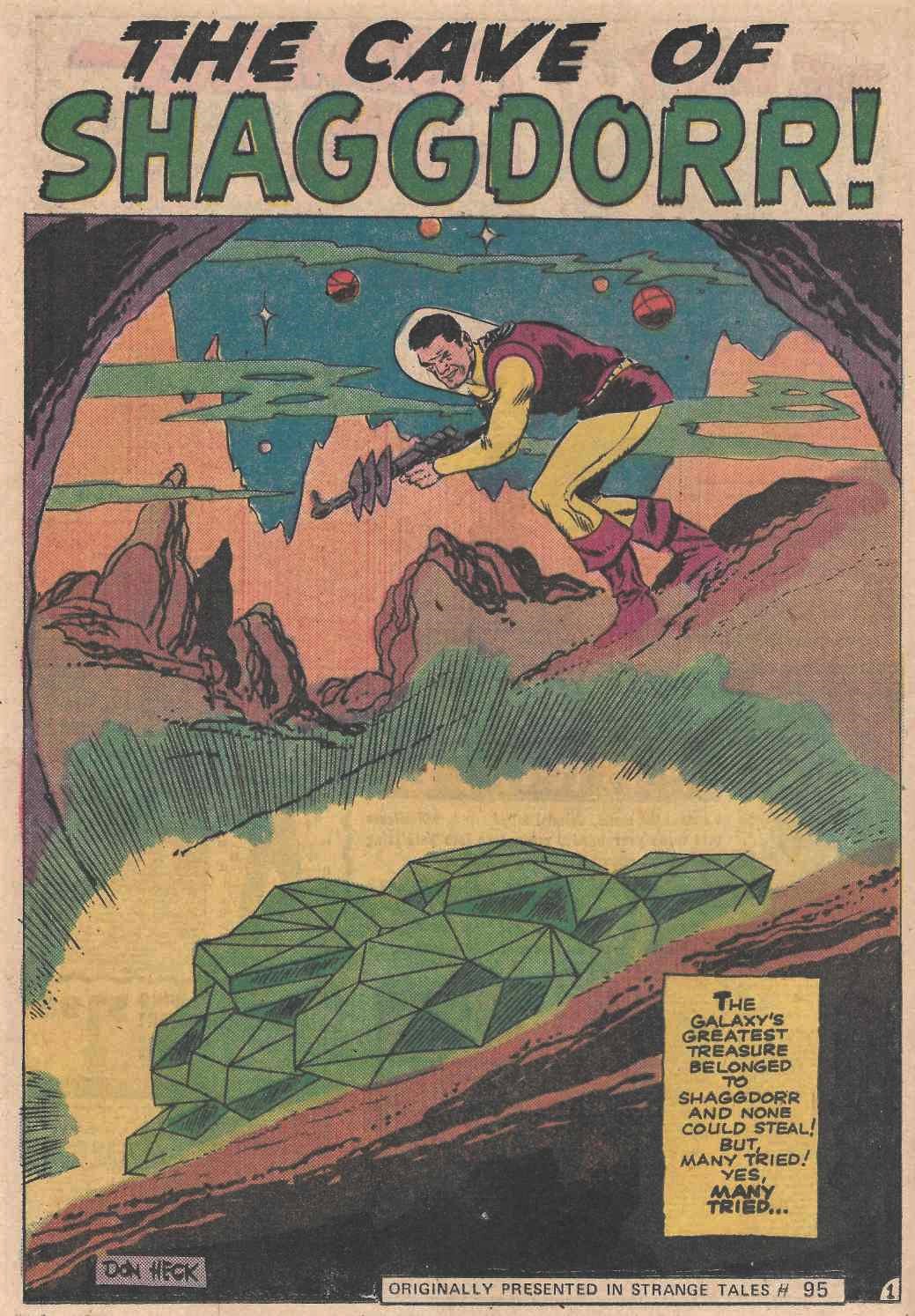 We begin with some exposition to set us all up: a creature called Shaggdorr has treasure on this planet that no one can retrieve. Everyone who tries to get it never comes back. A criminal breaks free of the law and…. 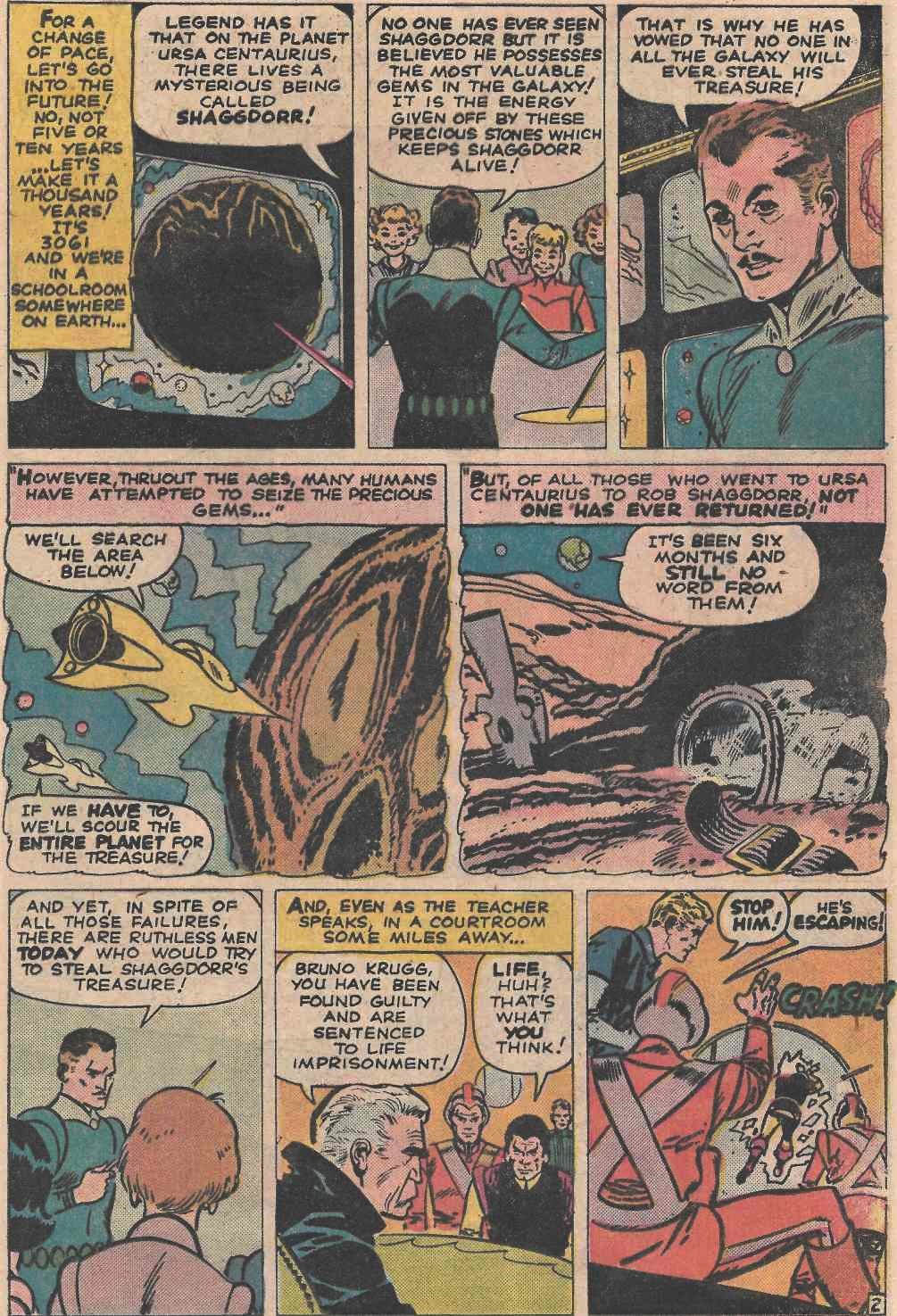 ..well, we know where he’s going to head straight for, right? 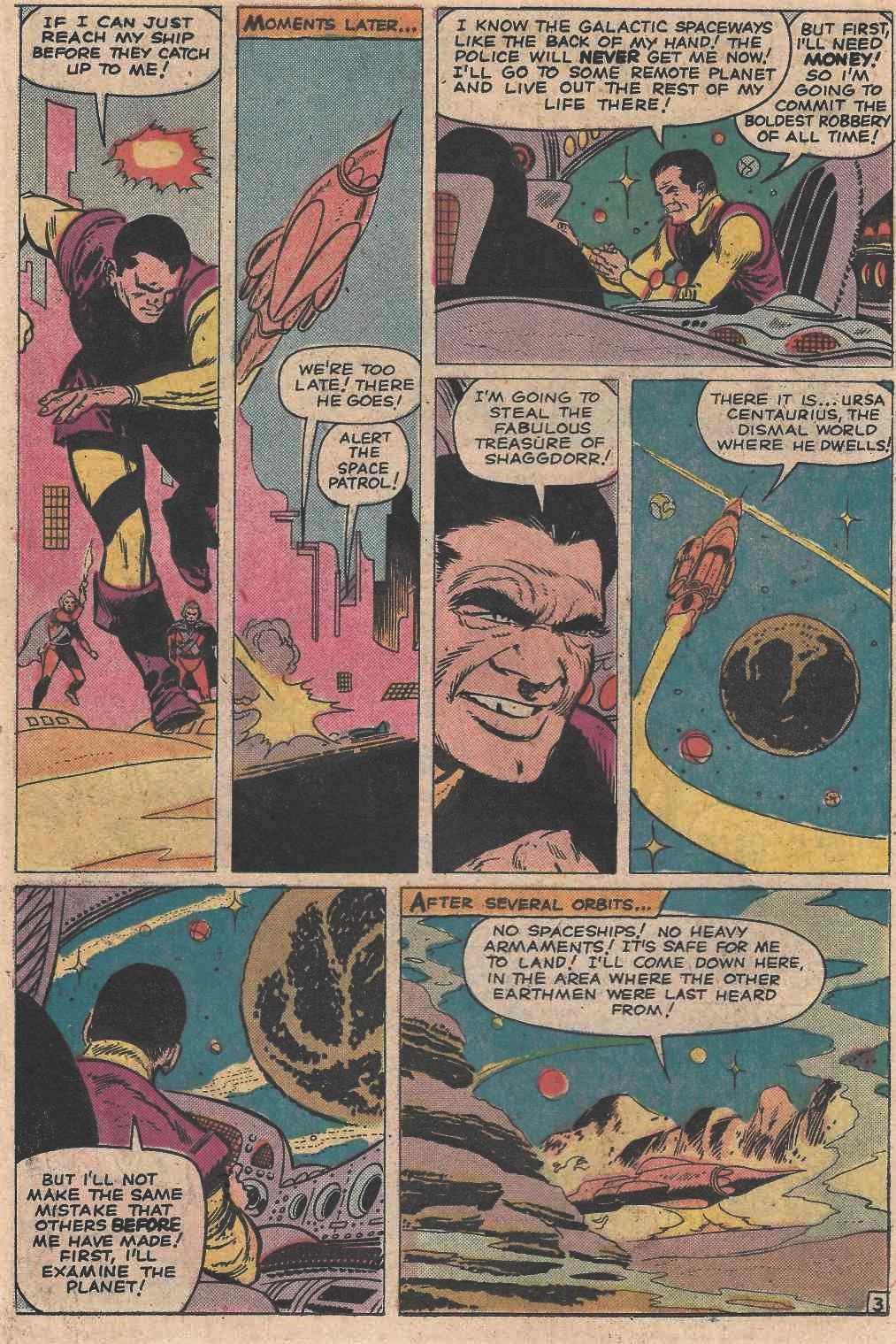 I like Heck’s fast and loose style here and the fluid spaceship designs far better than his work on Iron Man. Even his figure work looks better. But before I go further on the art commentary, back to our criminal as he “takes it slow” to avoid all the prior adventurer’s fates. He’s found the treasure, now he has to determine if it is booby trapped. 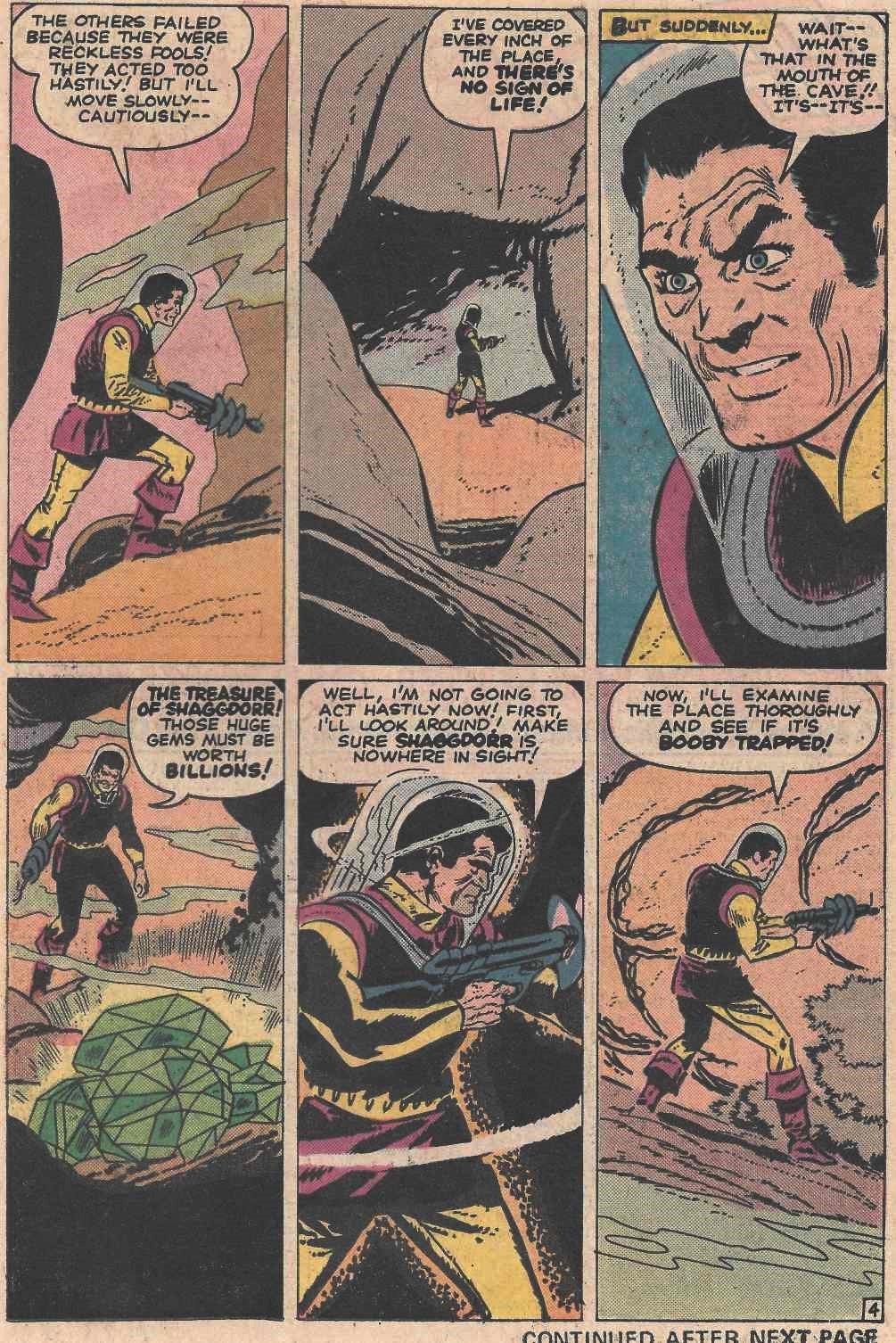 As we all know, the thing our low morals friend isn’t looking for is precisely what will be his “gotcha.” In this case it’s that Shaggdorr IS the cave he is walking into and getting away with the treasure is an impossibility. We saw it from the cover art, but the payoff here still brings a smile to our lips. 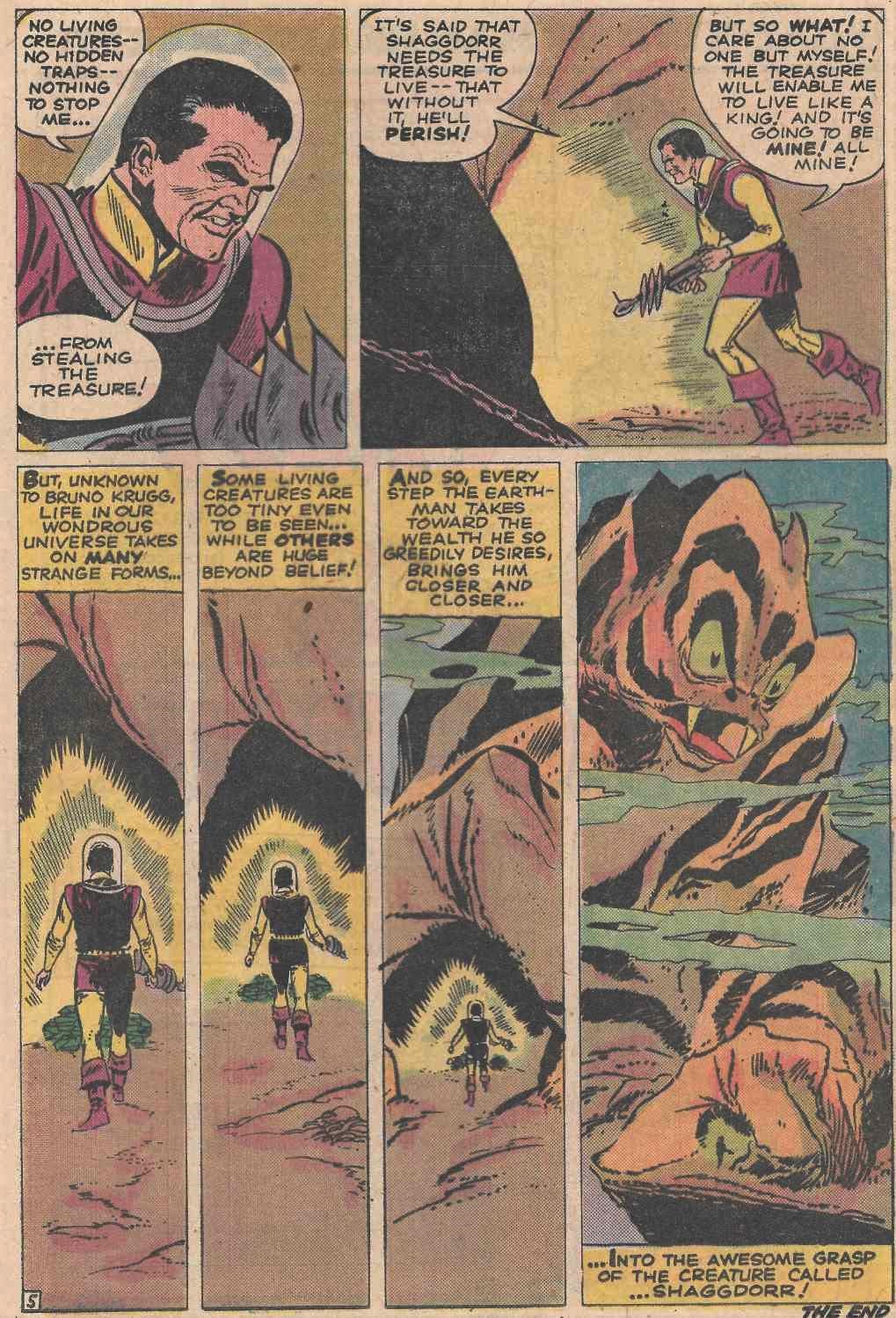 "Behold him! He is the Martian!”

Lastly, we wrap up with this little snippet from Tales to Astonish #25, November 1961. A treat to see Kirby pencils again and a retread of the Twilight Zone’s “Will the Real Martian Please Stand Up?” is always welcome fun. Let’s get to it! 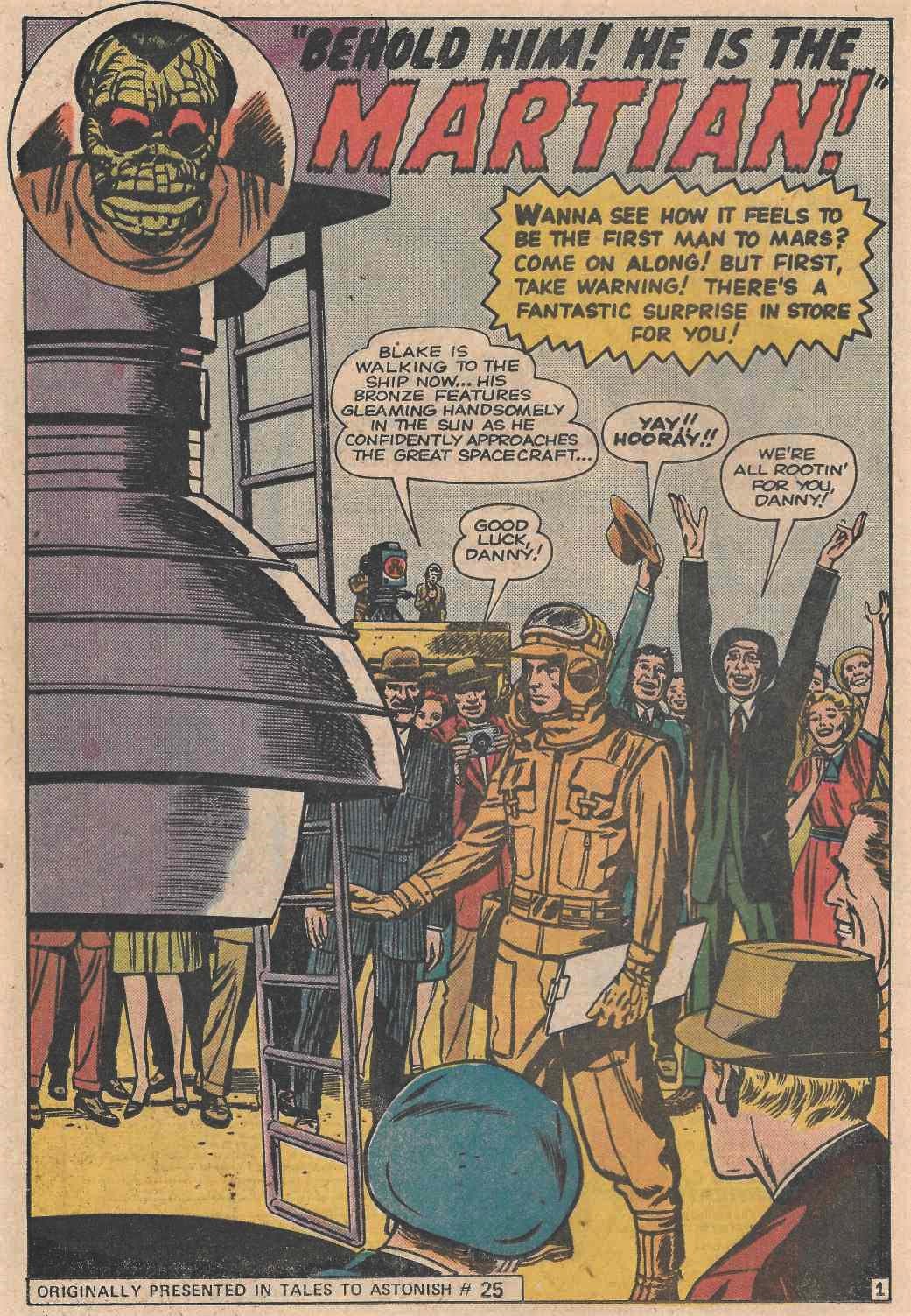 We begin with astronaut Danny Blake, hand picked to fly a mission to Mars. Everyone but our narrator seems to think Danny is a great guy. Our storyteller views Dan with suspicion, and given that he’s an investigative reporter, he decides to hitch a ride on Dan’s rocket. 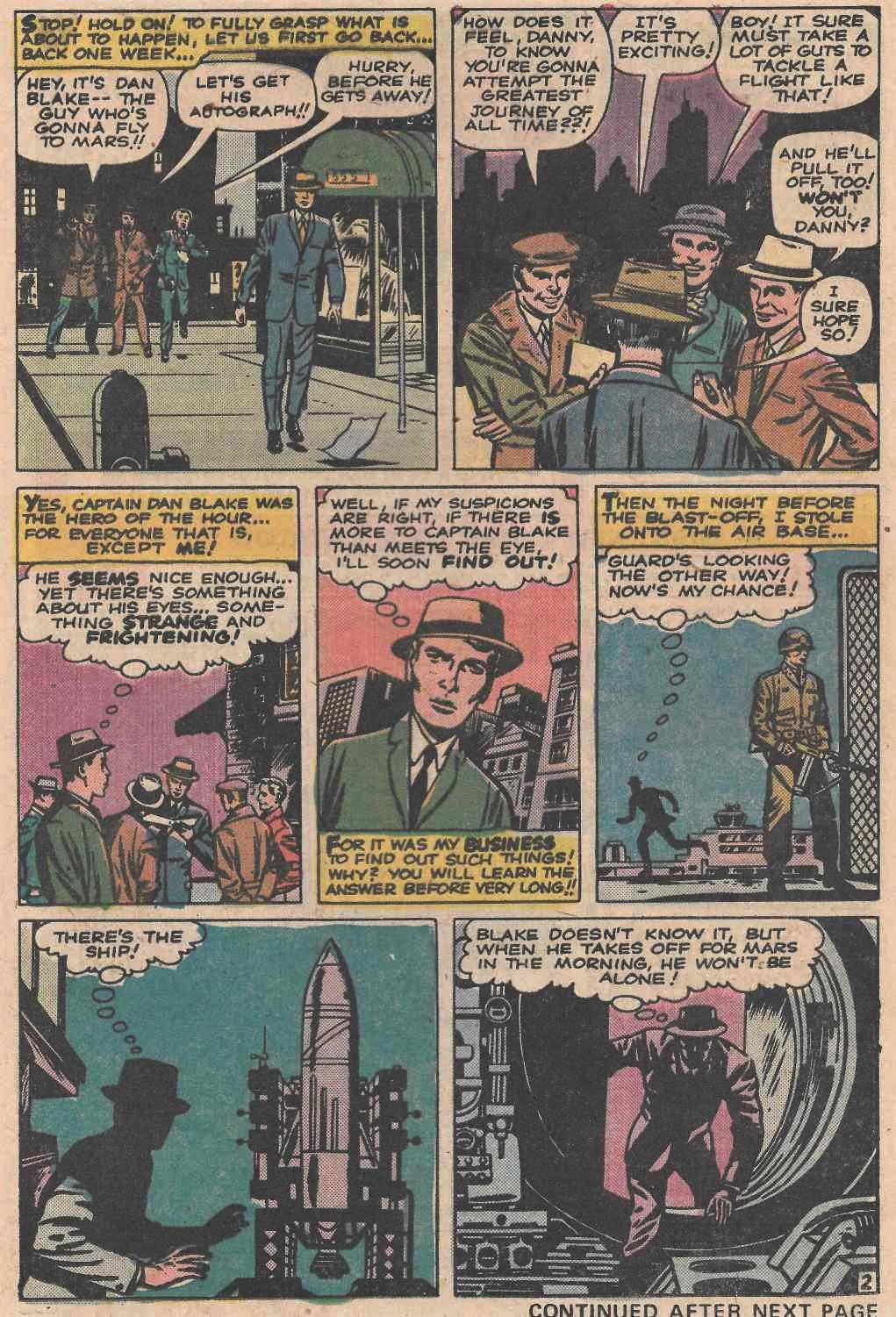 Now go with the 1960’s naïve view that adding this much weight wouldn’t throw off a rocket’s trajectory. Remove all thought as to how reporter dude is going to eat on the five year flight it would take to get to Mars. This was the 60’s and logic doesn’t always apply to their storytelling. Just marvel at that neato Kirby art as we launch ourselves into space with Danny and his stowaway. 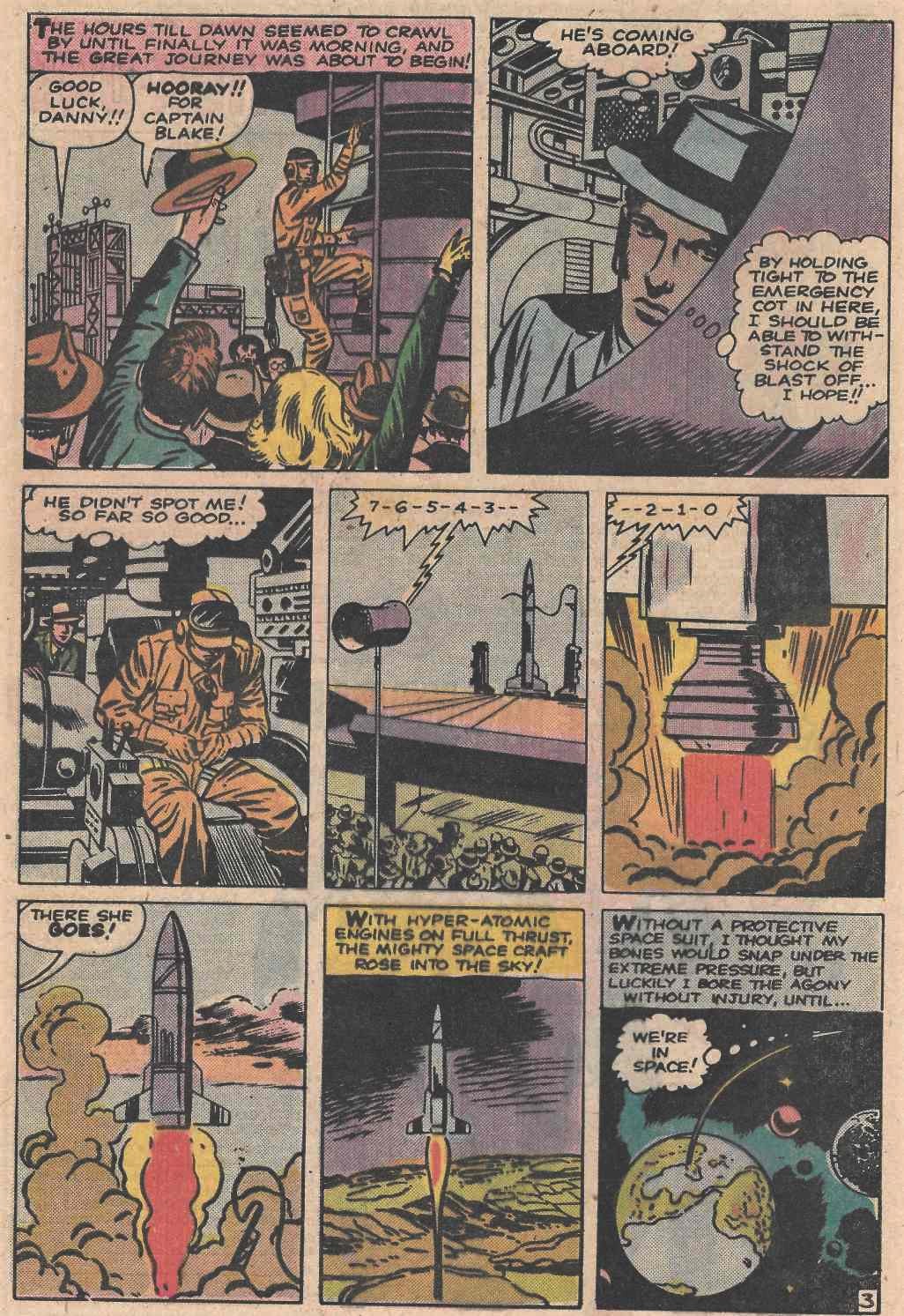 Once out of the atmosphere, Danny starts monologuing and removing his face. SURPRISE! He’s a Martian spy! But hey, he and the Martians really aren’t that diabolical. They are just like Trump supporters, except the wall they want to build is an imaginary one between Earth and Mars. That way there are no more manned missions coming from us to them. No “illegal aliens” from Earth, so to speak. 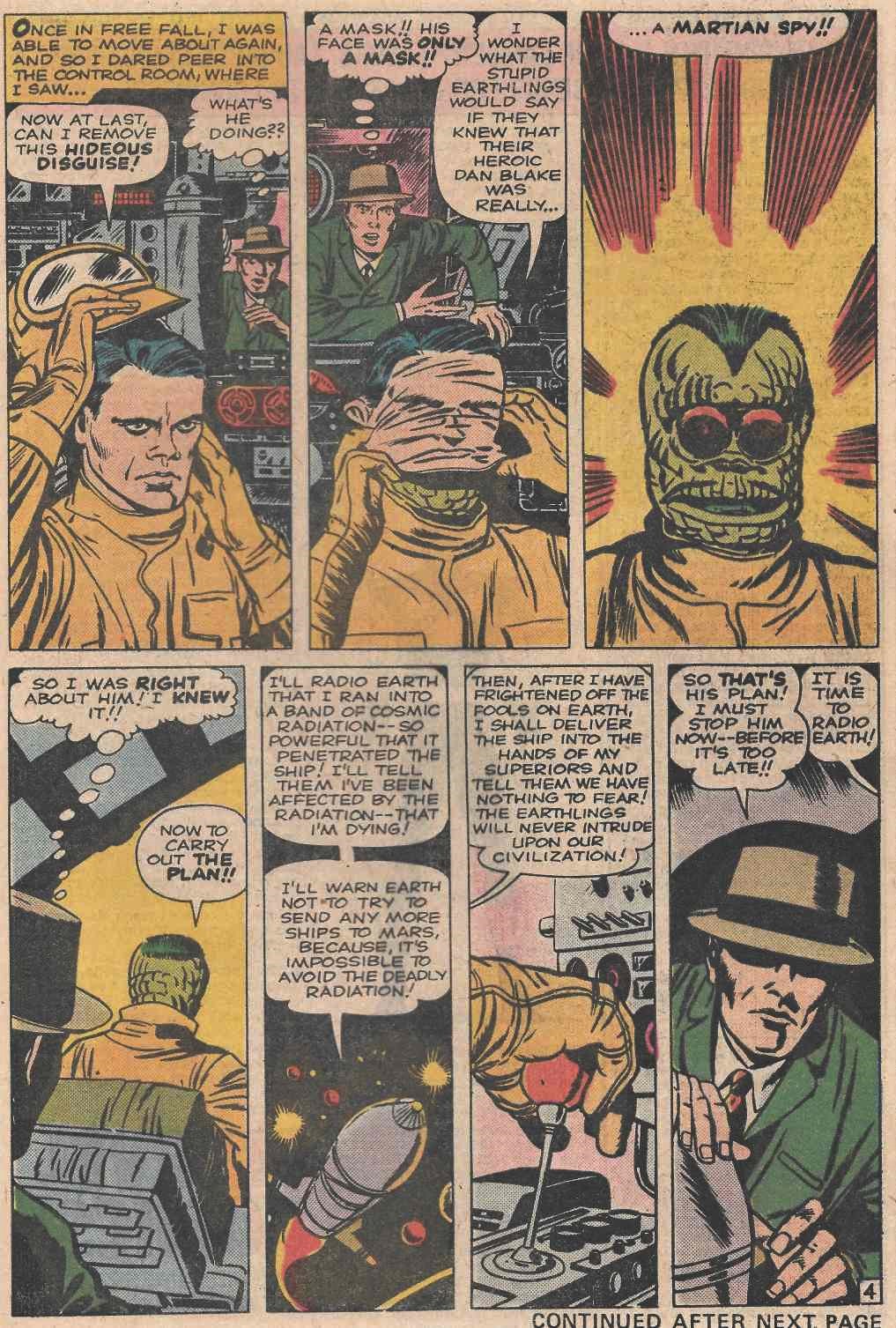 Well, we can’t have that! Earthlings need to be free to screw up every planet in the solar system. So, reporter dude tackles the Martian and a fisticuffs match starts. Martian thinks there is no way he can lose, but surprise! Narrator is somehow stronger than he looks. His foe defeated, he turns to warn Earth of what he’s found… 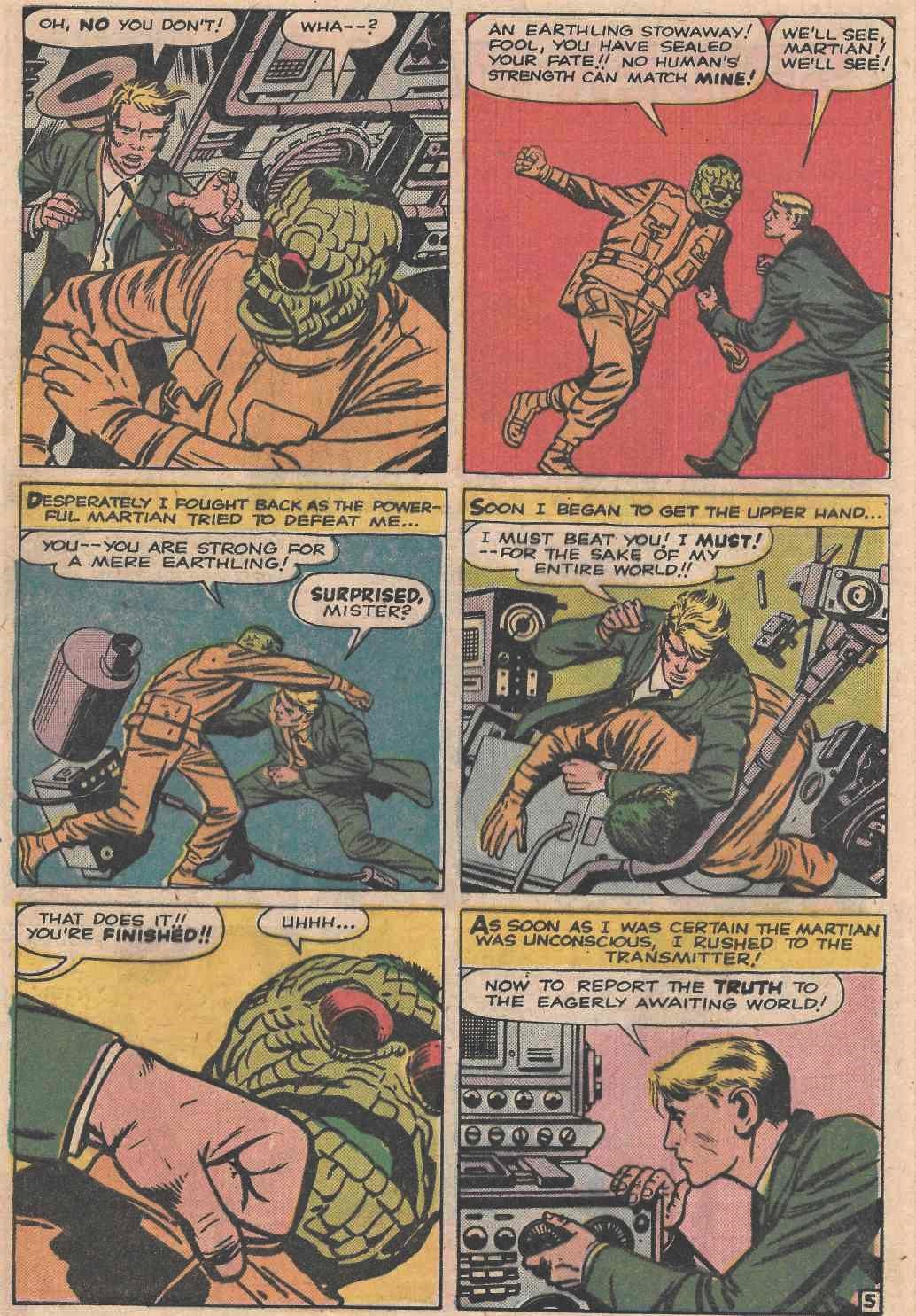 …except it isn’t Earth he’s calling. It’s HIS home planet Jupiter. He informs them that it’s okay to attack Mars and the tells Earth not to bother with the trip because the fast food joints on Mars give you horrible diarrhea. Or something like that. 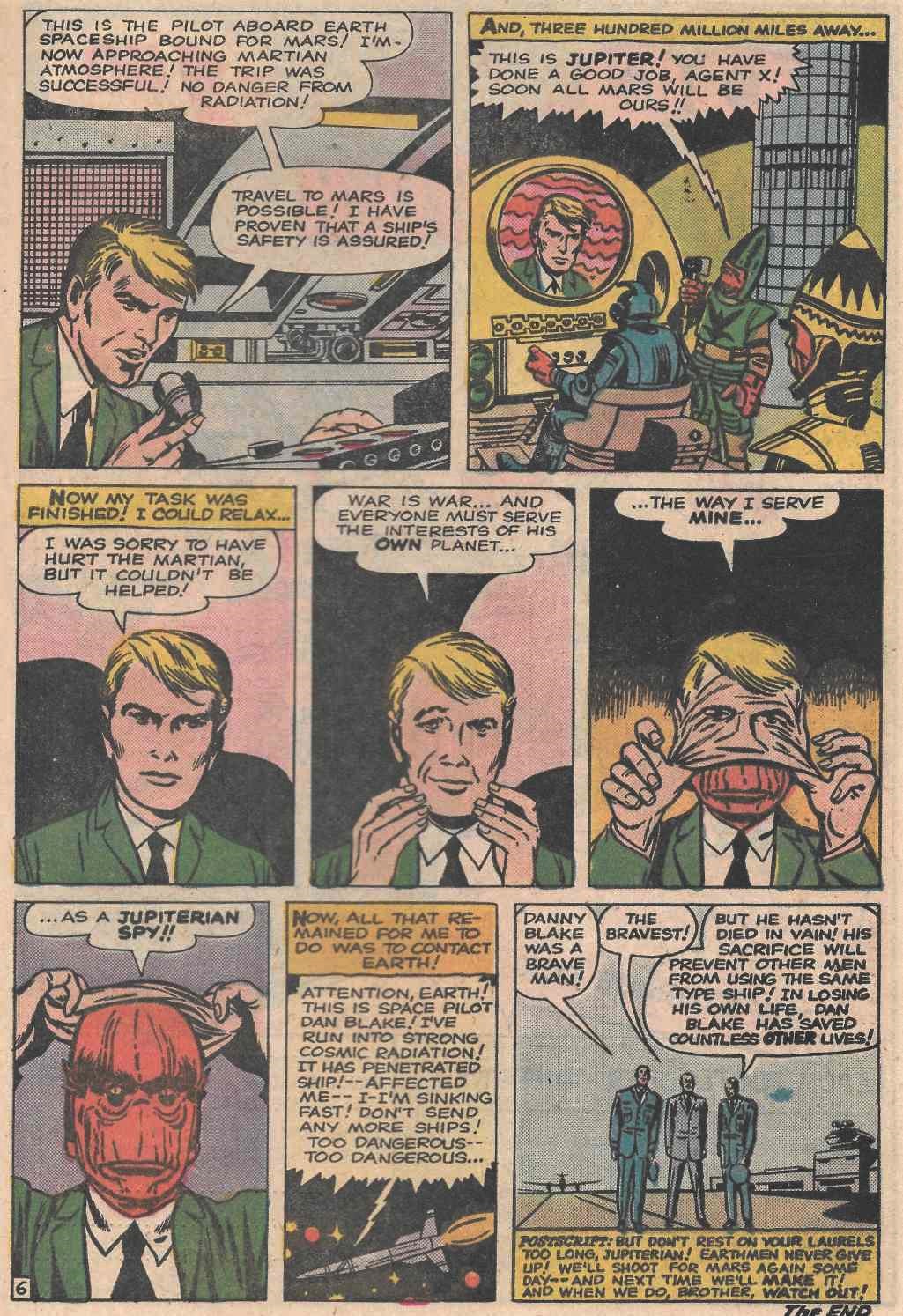 Loved this book. Sure, each of the five-page stories flew by, but not once did I feel bored with the book’s content. It’s a shame how Marvel reimbursed its talent back then, but these Weird Wonder Tales issues seem to be a good investment if you want bang for a couple of bucks.
Posted by SonOfCthulhu at 12:23 PM