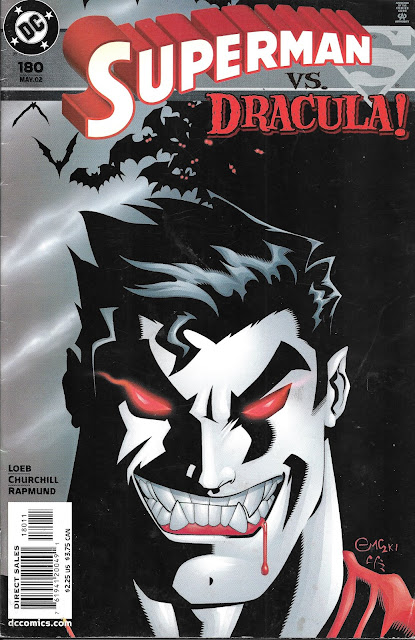 "The House of Dracula”

Ah, have I got a week of crazy vampire action for YOU! That’s right, Crapbox reader. Starting today we are doing the King of Vampires as he fights his way through some of the biggest names in fiction. We start with the top dog at DC himself…what do you mean BATMAN? No! The OTHER top dog!

And to begin our tale, we jump right in with this full page headshot of our man himself…Count...Rominoff? 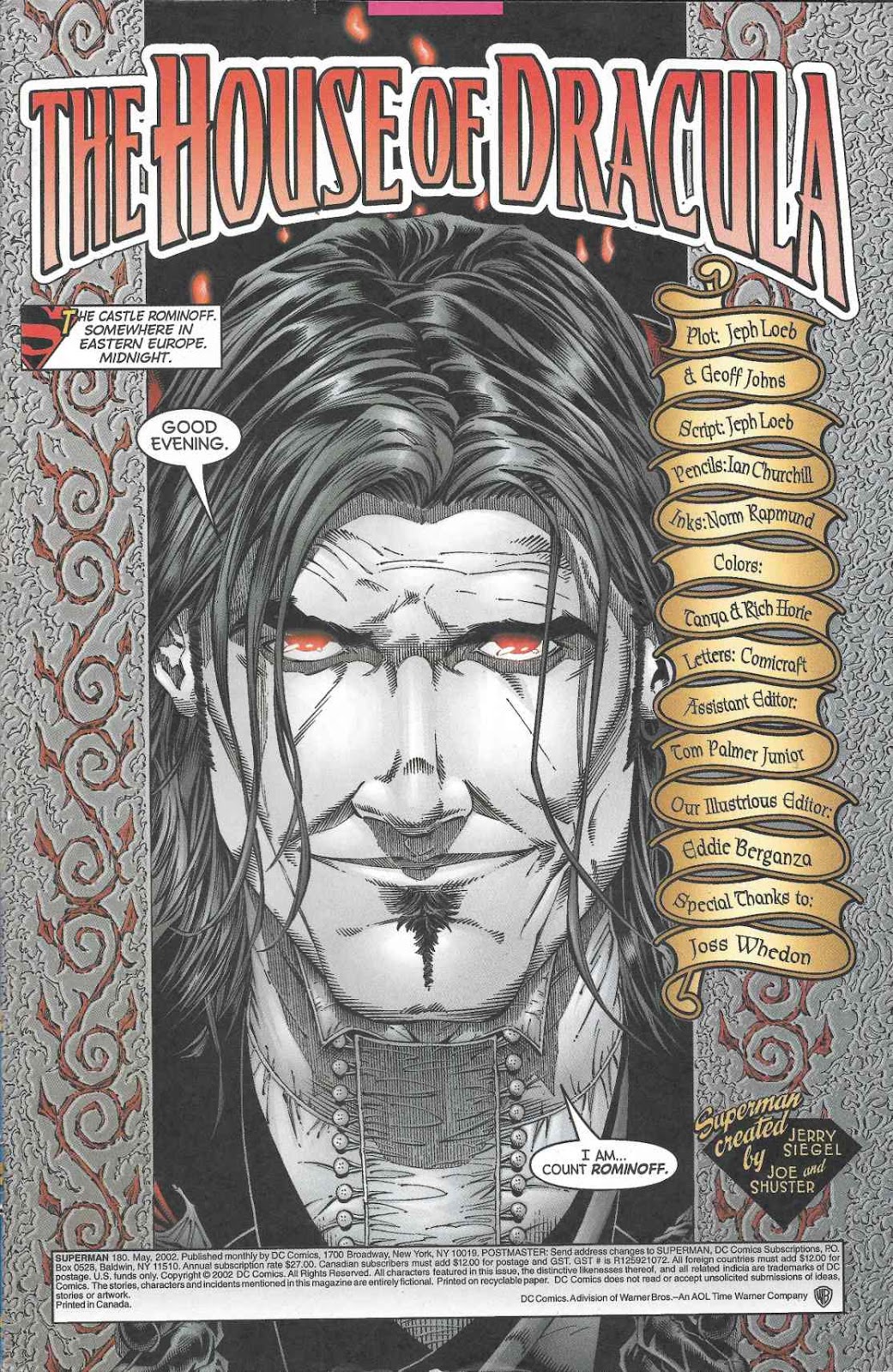 Wait just a minute! I was told there would be Dracula action. Not a stand-in. Not some other vampire who can speak with a middle European accent. No. The man himself.

Guess we have to take what we can get. Which is still…pretty impressive. Just look at that huge Gothic castle. Also find it a bit funny that Lois is trying hard to make fun of Clark’s alter-ego in whispers. 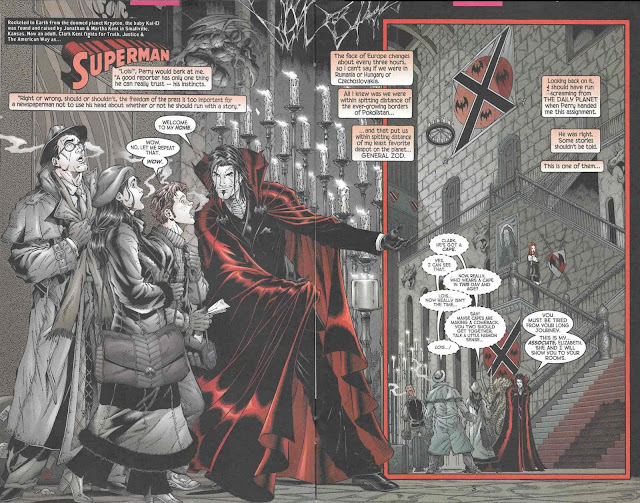 The background to this is Lois has been invited by the Count for an interview. He’s a recluse, but has decided to open up to the world due to Superman’s nemesis General Zod taking up residence in the neighboring country. Rominoff is feeling like Zod’s x-ray vision is sizing his country up for a takeover. So he’s invited Lois down for a one-on-one interview to stir up some sympathy on the world stage for his country…and perhaps for one other very important reason yet undisclosed.

While Jimmy gets to know the Count’s friend Elizabeth, Rominoff turns up the charm on Lois. 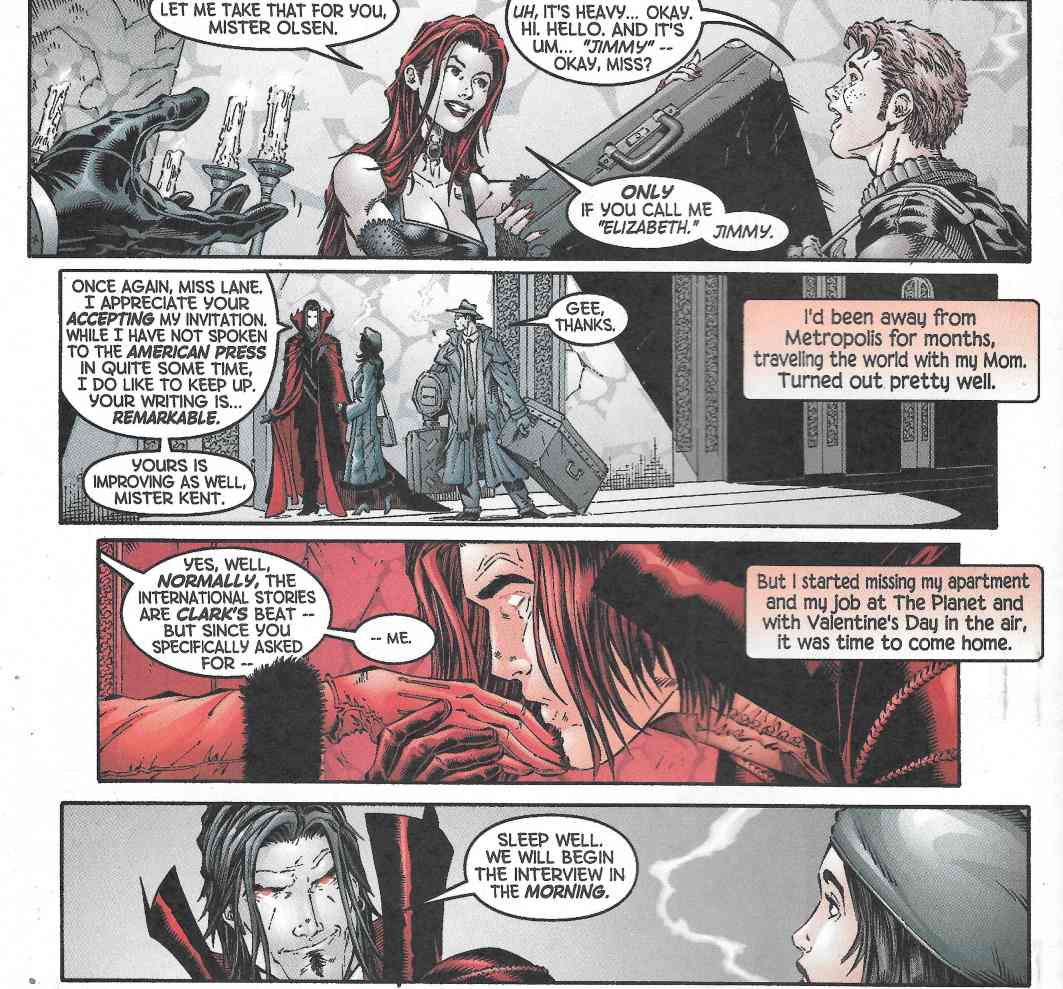 None of this amuses Clark, who suspects something. 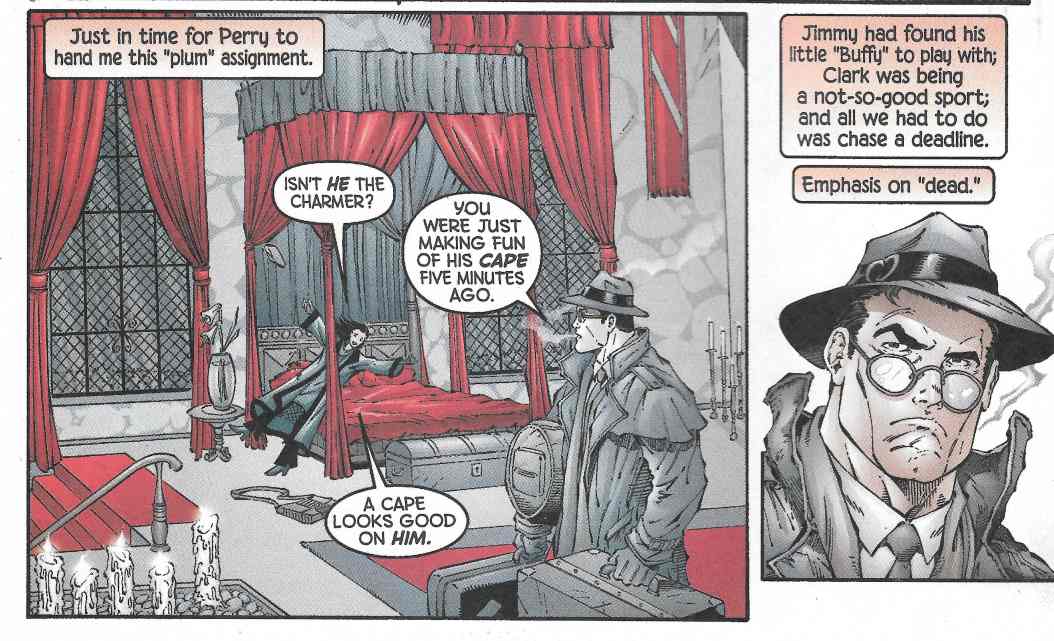 Which is spot on a good guess, because that night Lois is vampire mesmerized out the windows and down a flight of cloud stairs. You’d think someone with super-hearing would have stopped her before she took a step…but we need a plot, so that’s a no. 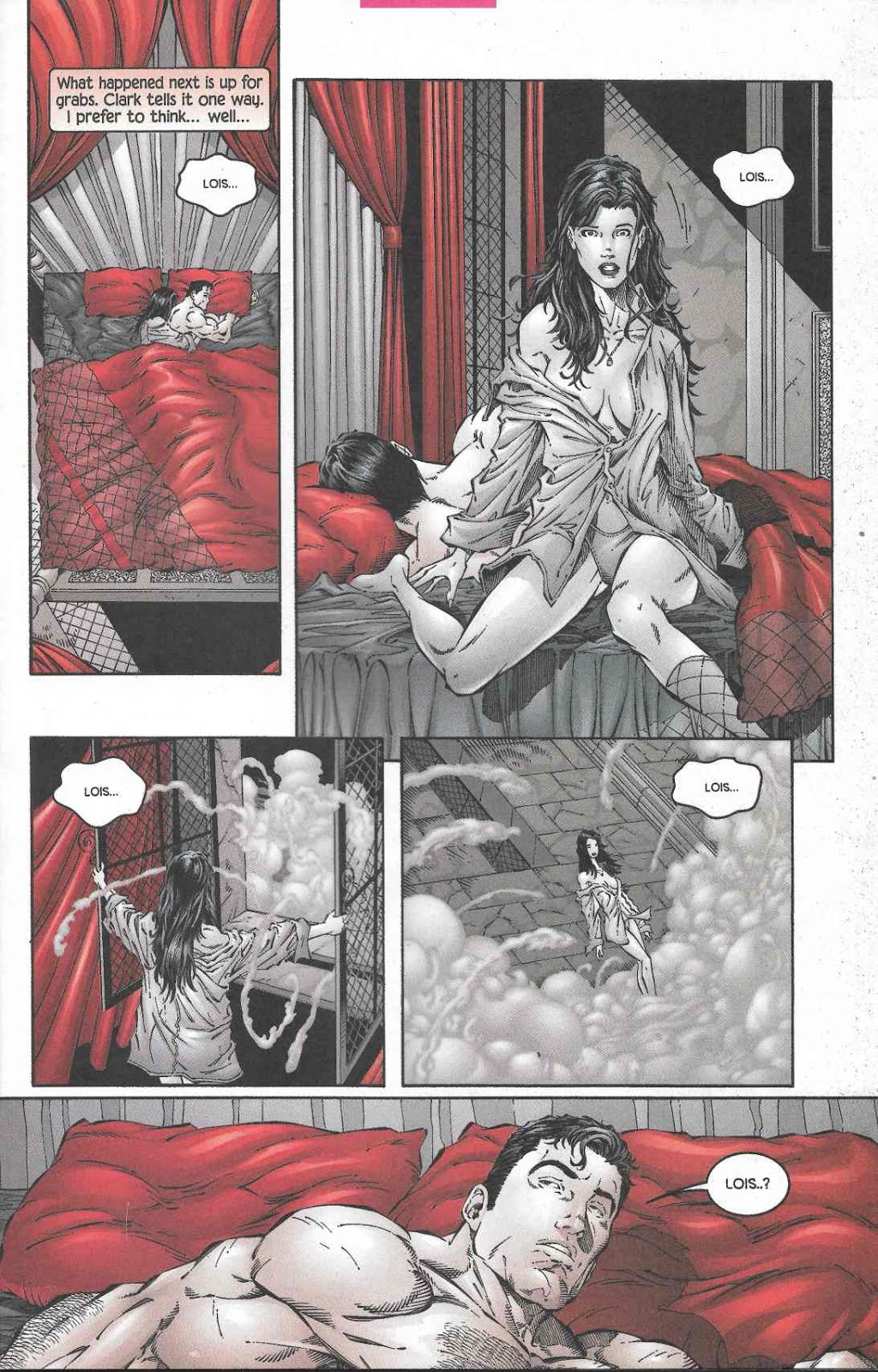 Lois is left tramping around the muddy countryside with her clothes half hanging off her when she is beset by a pack of large…Werewolves? What the heck, book? I thought this was Dracula. You going to give me EVERYTHING but the big man himself? What’s next? Frankenstein? 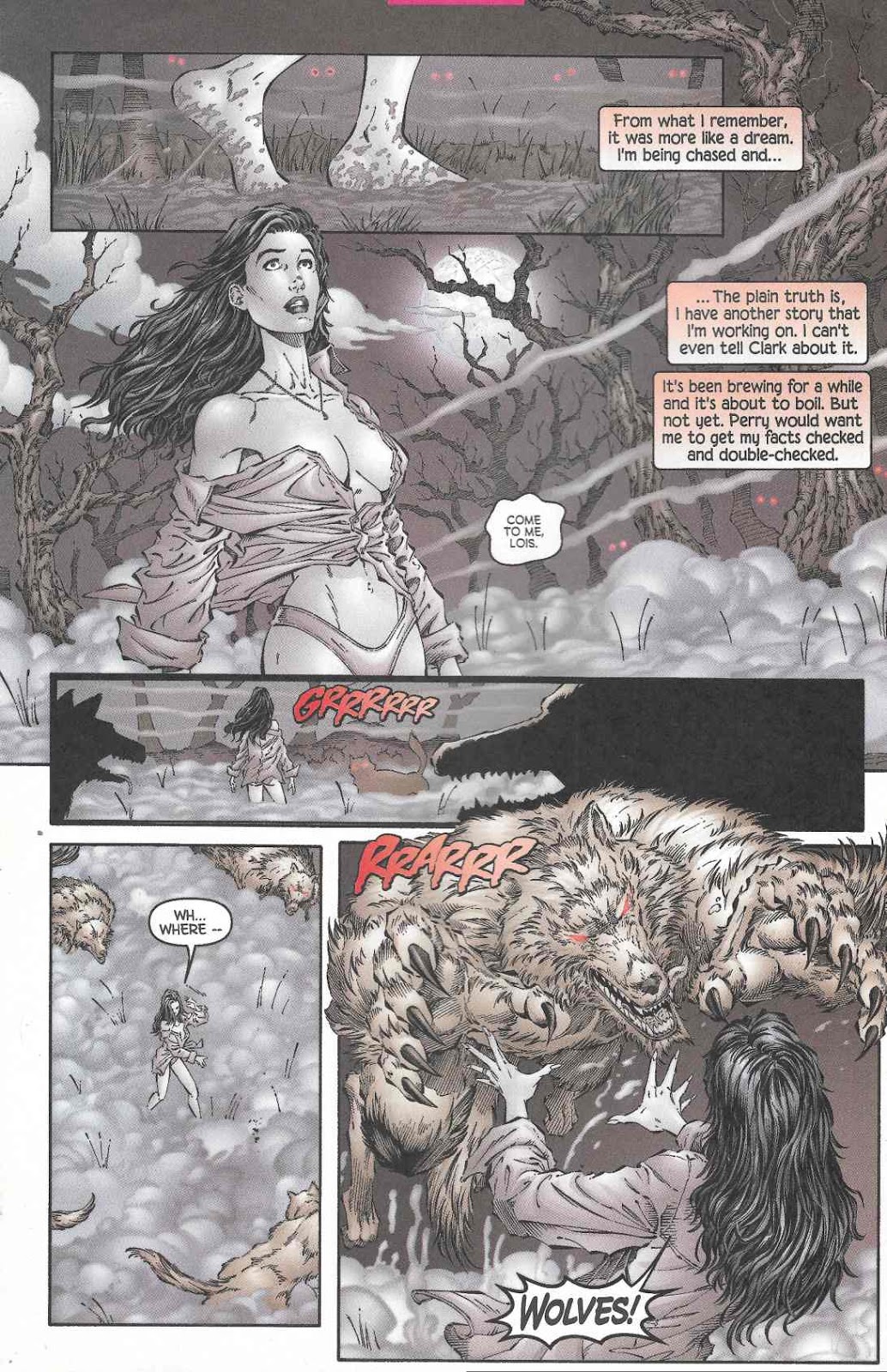 Luckily Superman flies in to rescue her, but come on…he should have had her before she got out the window. 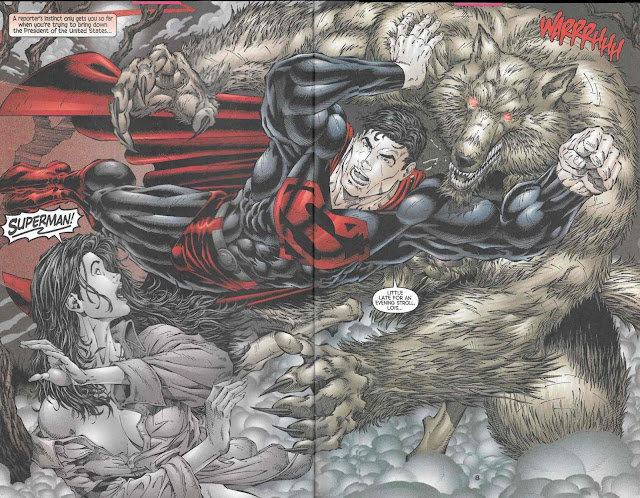 Oh, and Supes isn’t immune to magic and werewolves are just a teensy bit supernatural, so he’s actually gonna take some pounding here while Lois escapes. 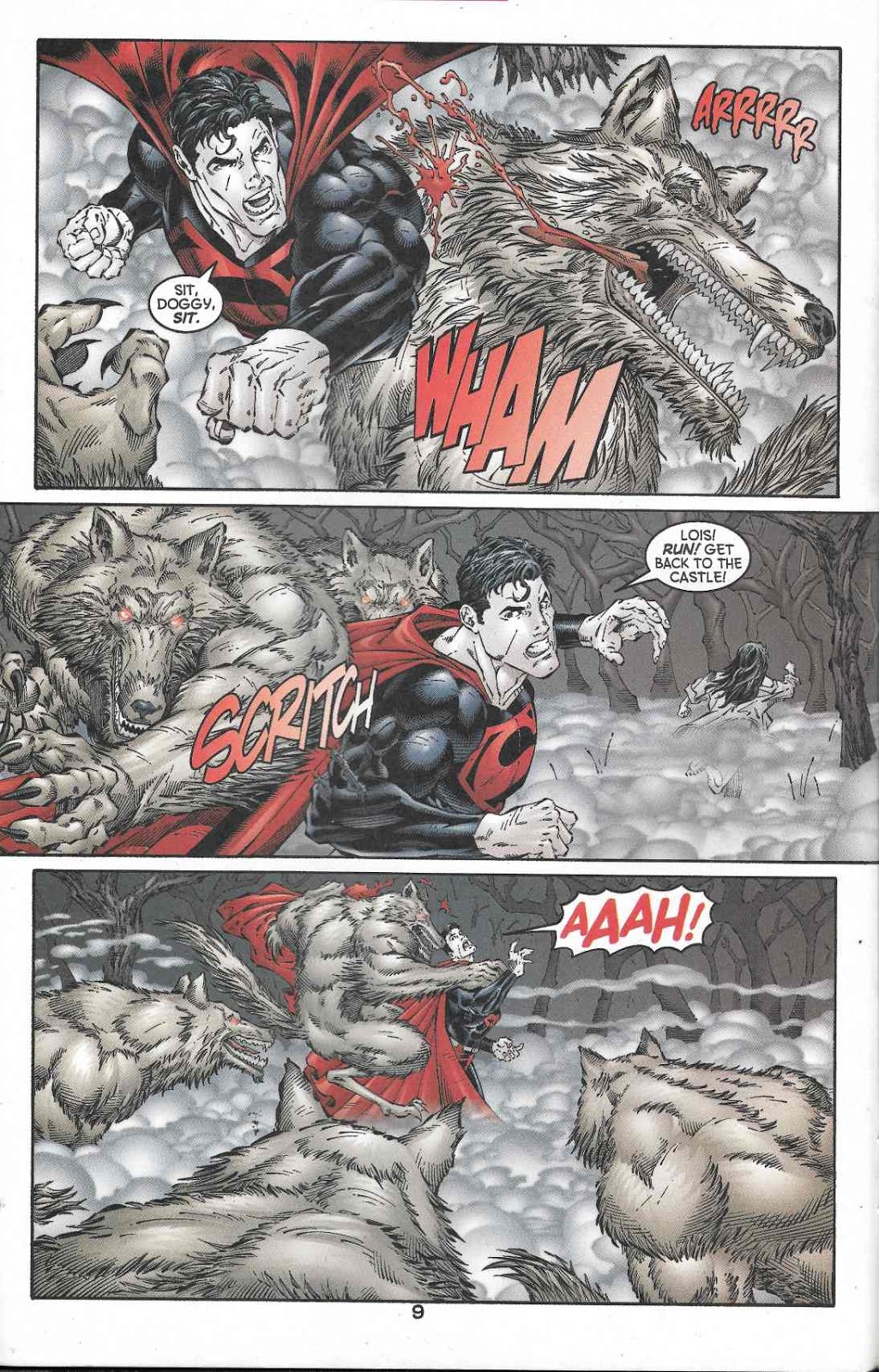 And while Clark is becoming dogfood, Lois runs into Rominoff, looking all vampirey. He seems more interested in...did Lois bring “him.” 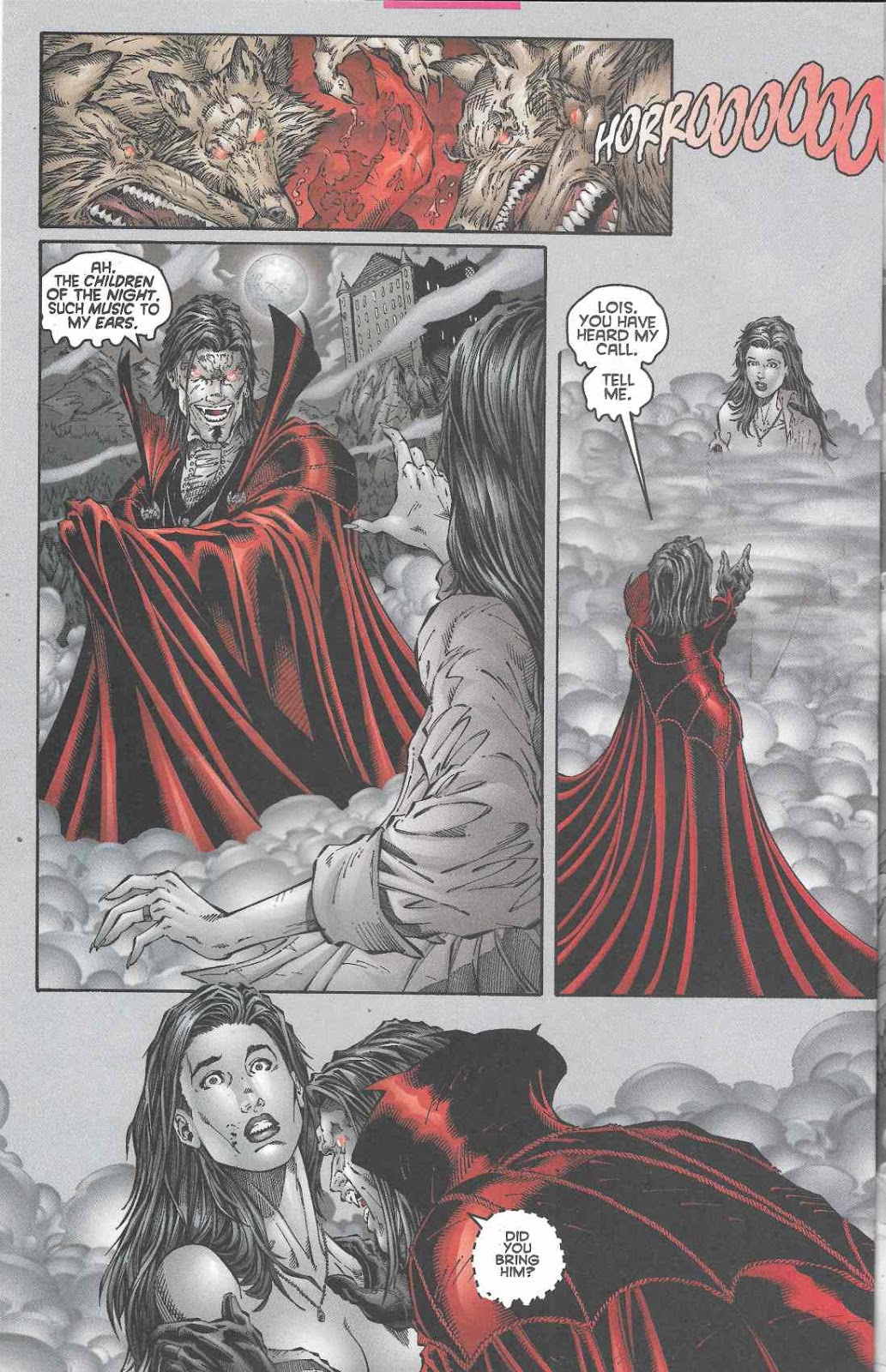 And next page it becomes clear that the him in question is Superman. Supes catches the hypnotized Lois while Rominoff turns to red mist. 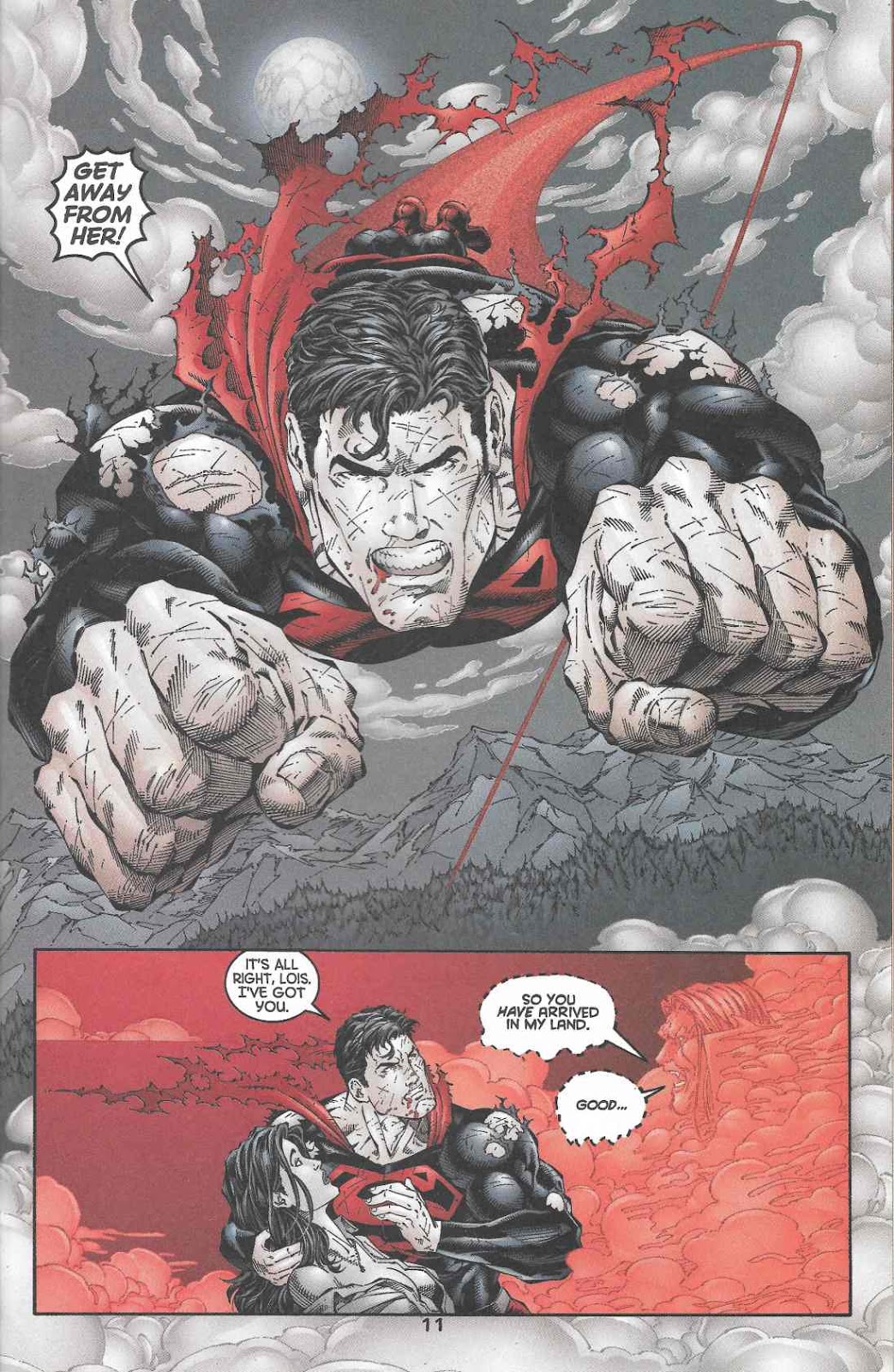 However, Superman’s girlfriend appears to have a bone to pick with him concerning who he chose to save during the recent alien invasion. Then she faints dead away 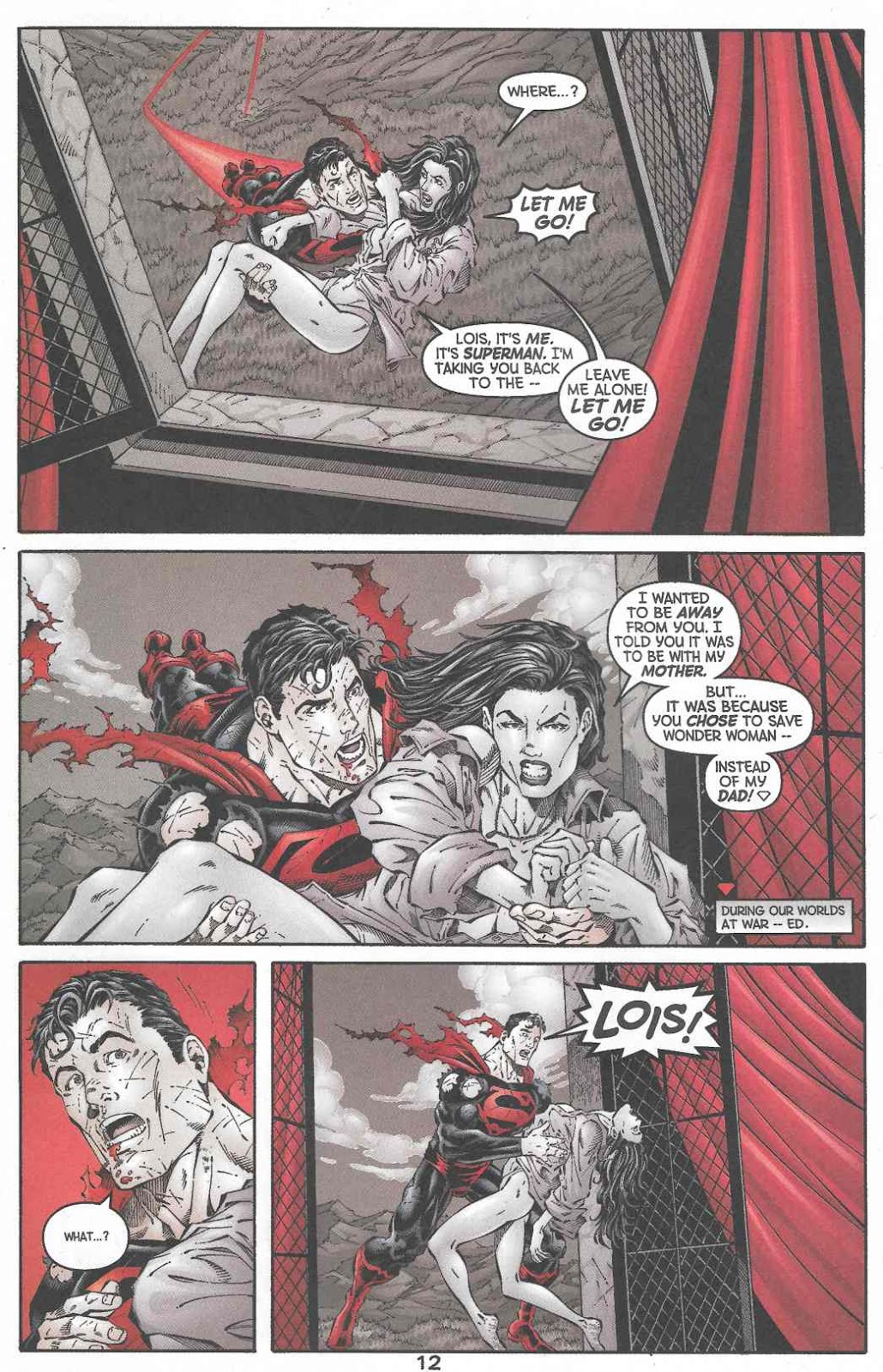 Come next morning, Clark is recharging his solar batteries and Lois has no remembrances from the night before. Not only that, but her feet aren’t even muddy. Could Clark have just dreamed the entire encounter? 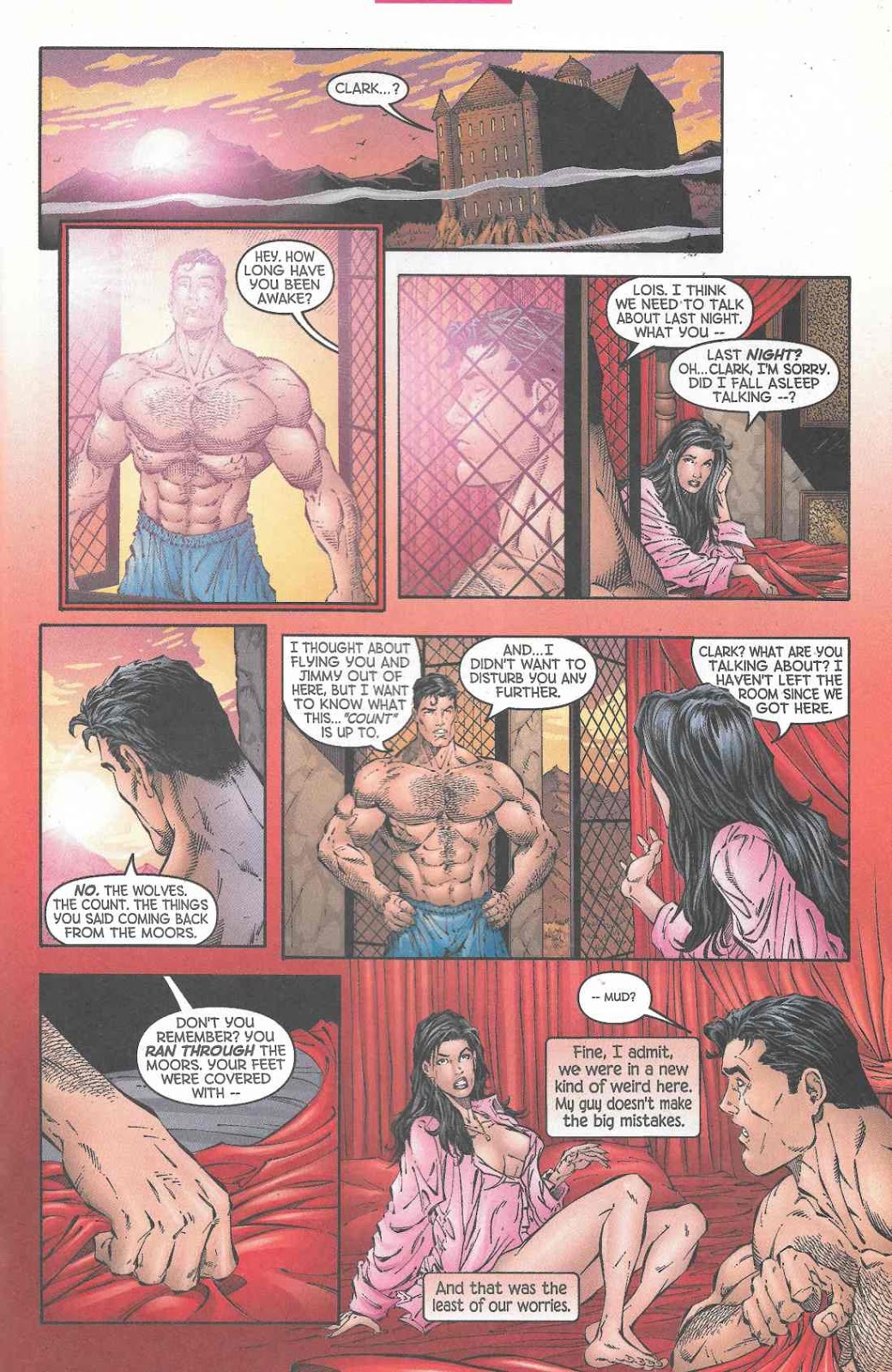 Given that only Clark seems to think Rominoff is a vampire, the interview starts as scheduled. Anne Rice was not called to consult. And it appears to be standard type stuff where Rominoff admits he’s worried about Zod on his boarder. However, the location of said interview is most peculiar, being in the wine cellar. Clark is even thinking these wine bottles don’t hold wine. 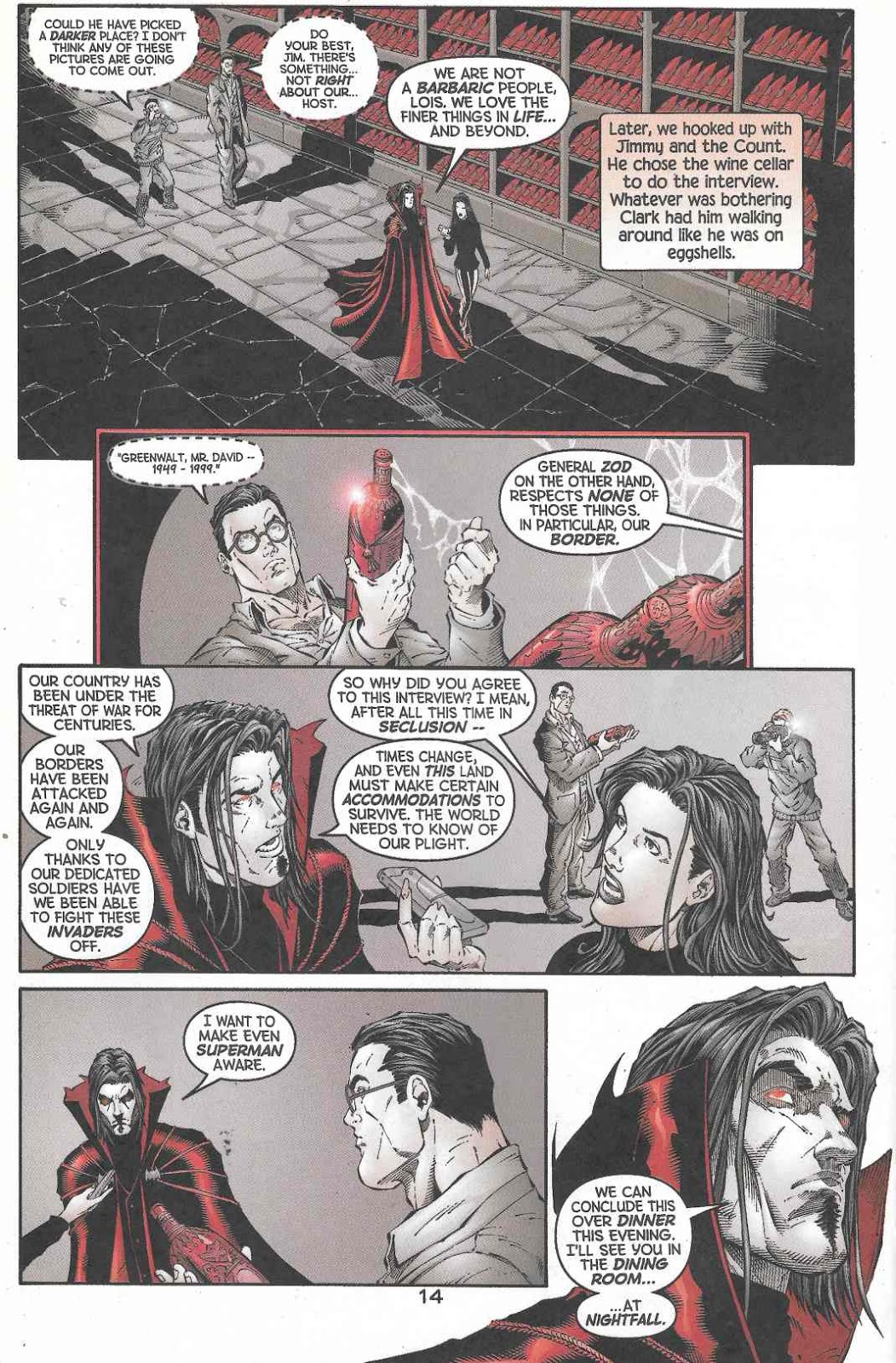 Elizabeth comes to see Jimmy and at first you’re think she’s look for the D, which she is. If D stands for drink. 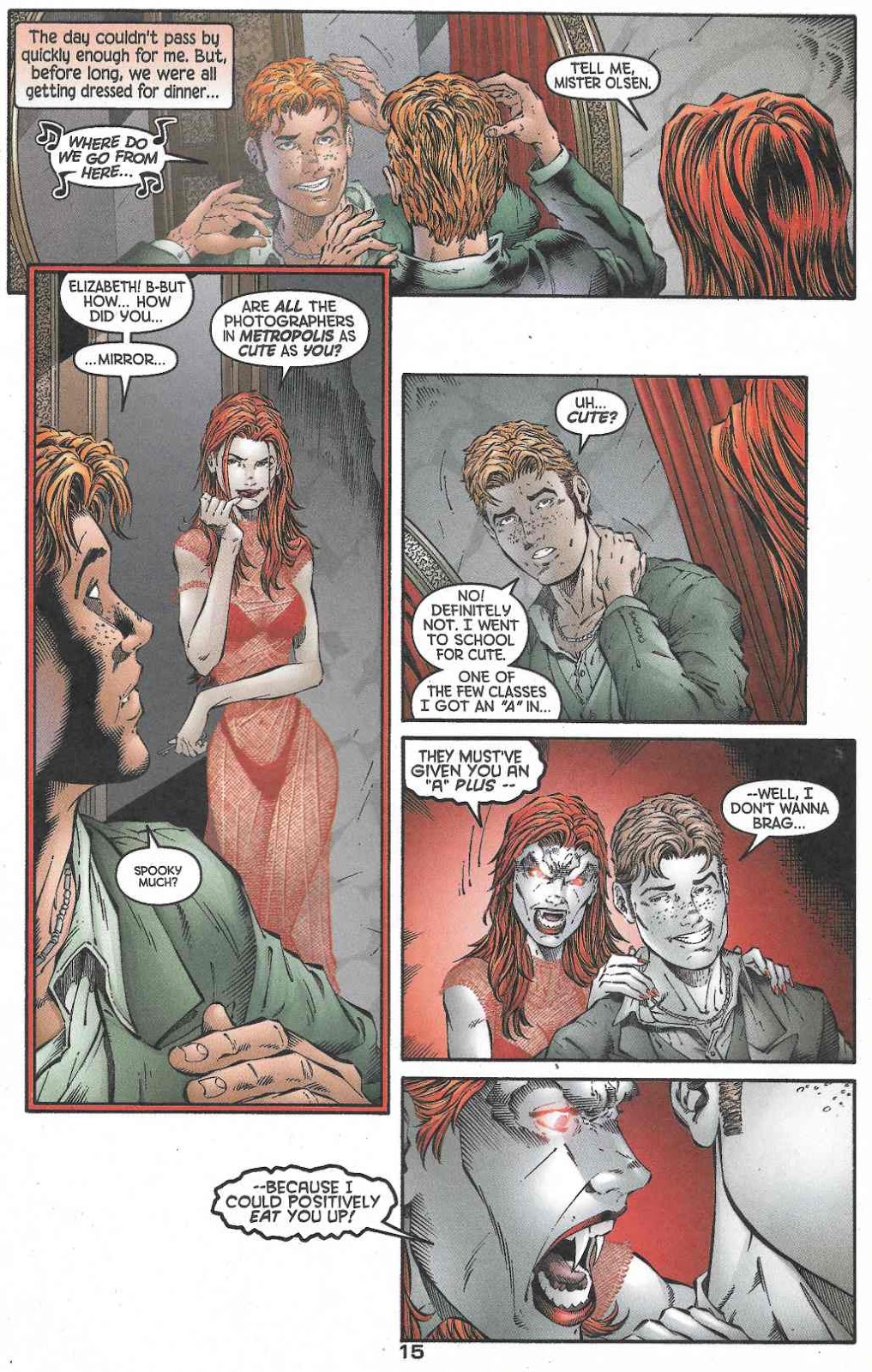 We’re back to Lois and Clark, with Clark revealing his suspicions about the bottles. Lois isn’t listening, which seems a little not like her, but whatever makes your plot tick. She heads down to see Rominoff… 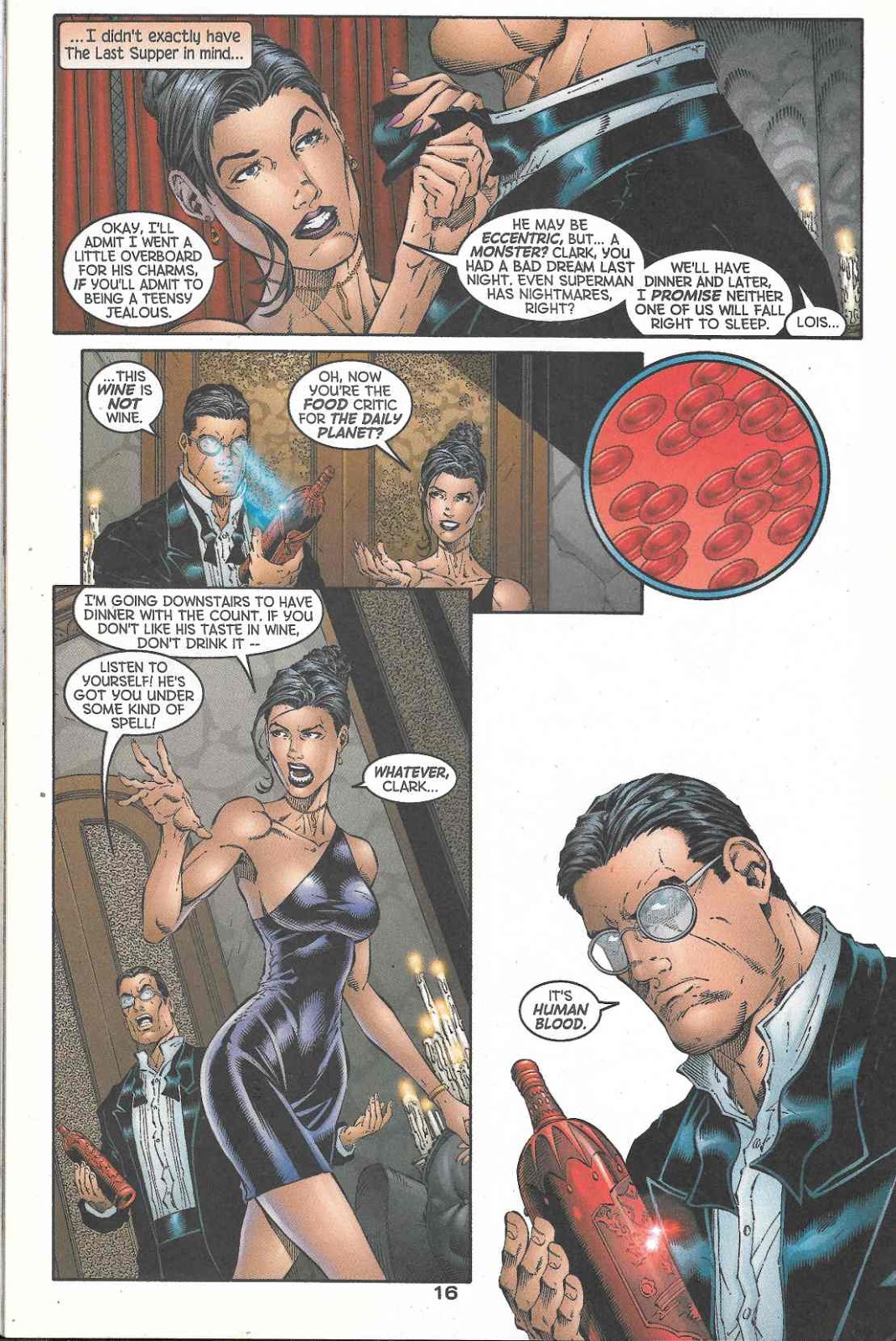 Who is hanging from the ceiling drinking bottles of blood because he really is COUNT DRACULA! What a surprise! 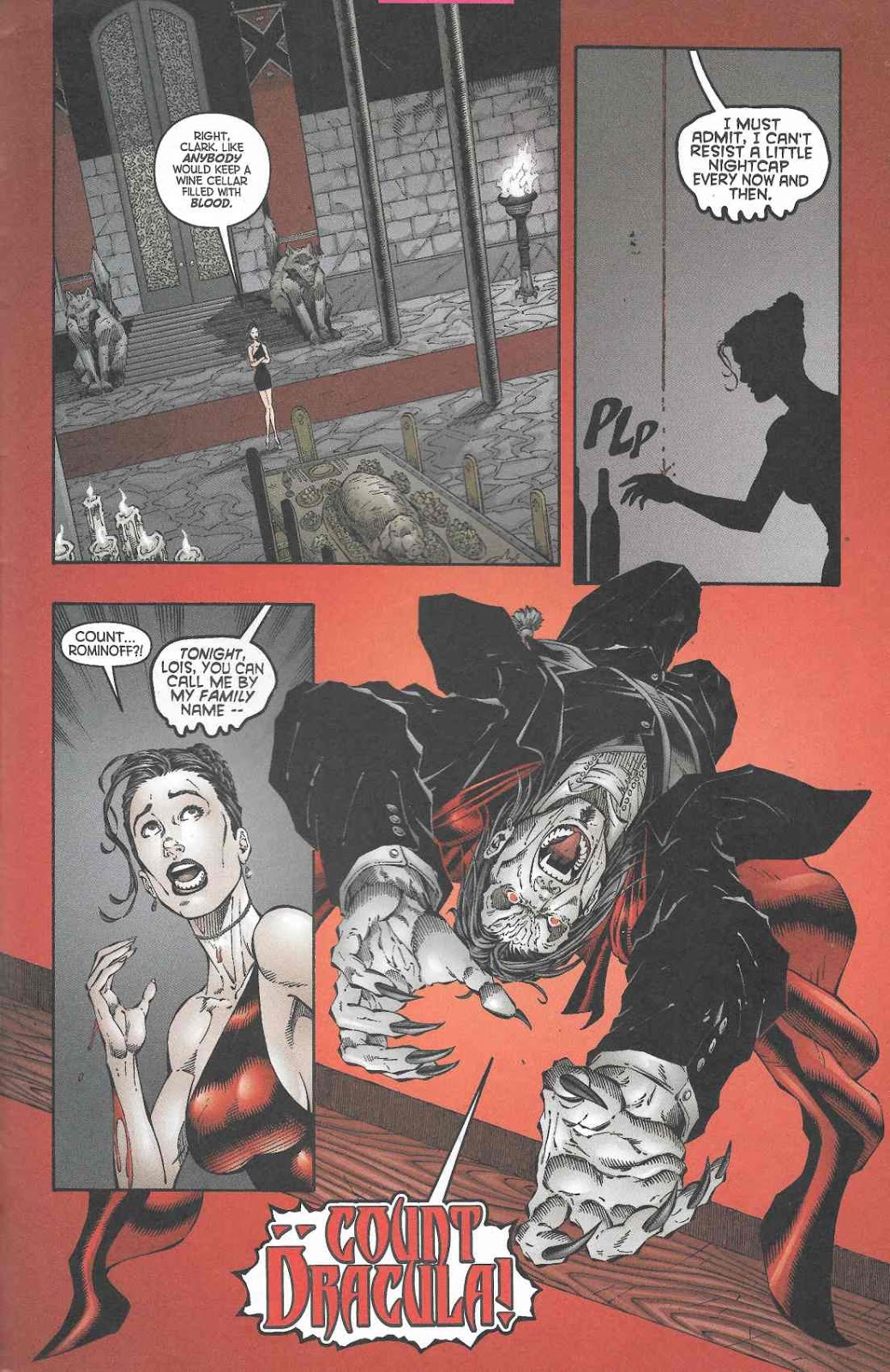 Speaking of surprises, in bursts the man of steel…to fall completely under the charms of Dracula. Seem the count wants some super security and turning Superman into his thrall is a good way to insure that Zod doesn’t come calling. 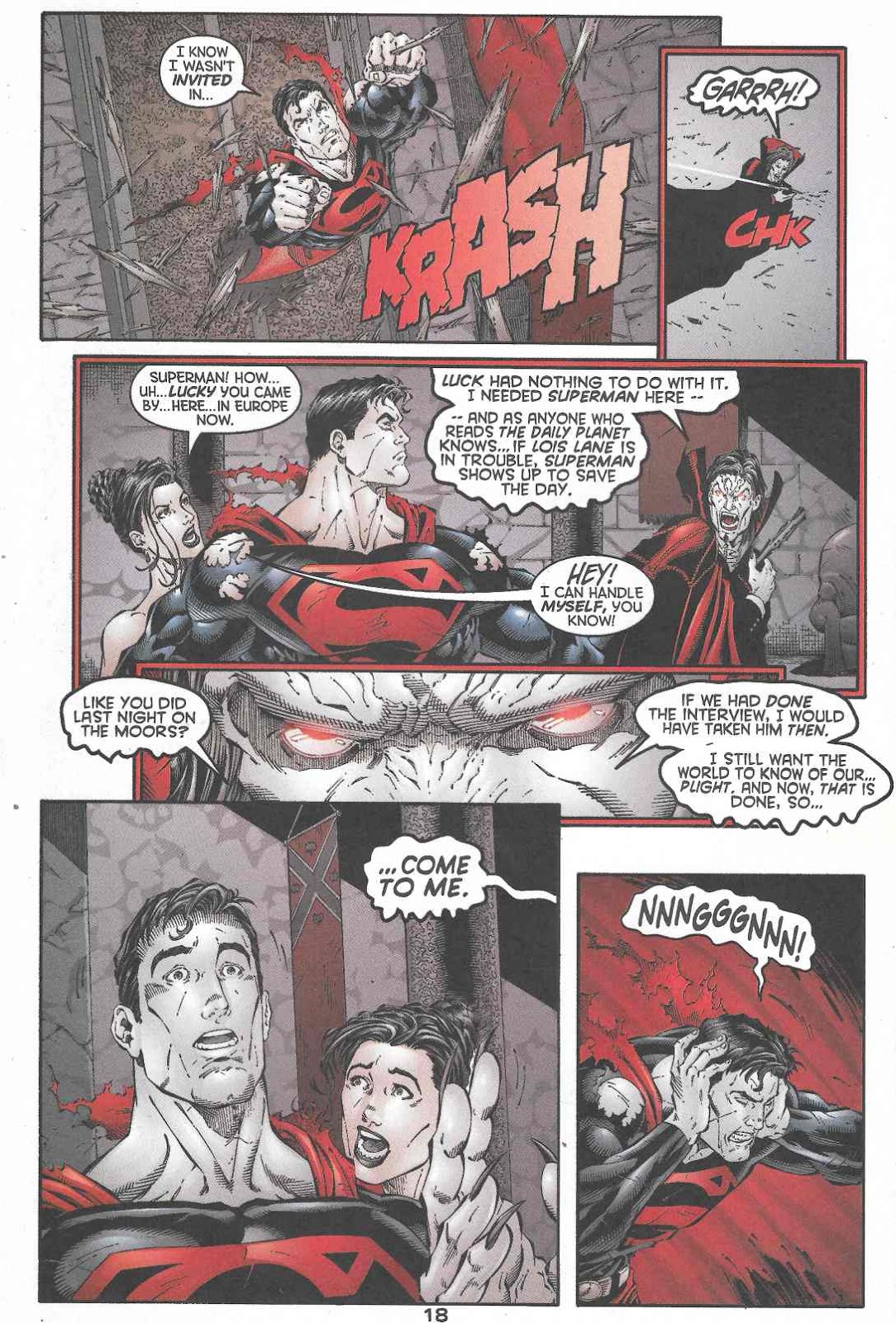 Lois tries to save him, but Superman pulls a dick move and tosses her aside, throwing out a line that should lead to some couples counseling later on. If there is a later on for this pair. It looks like those therapy sessions will have to be at night, cause Supes won’t be able to make it out in the daytime… 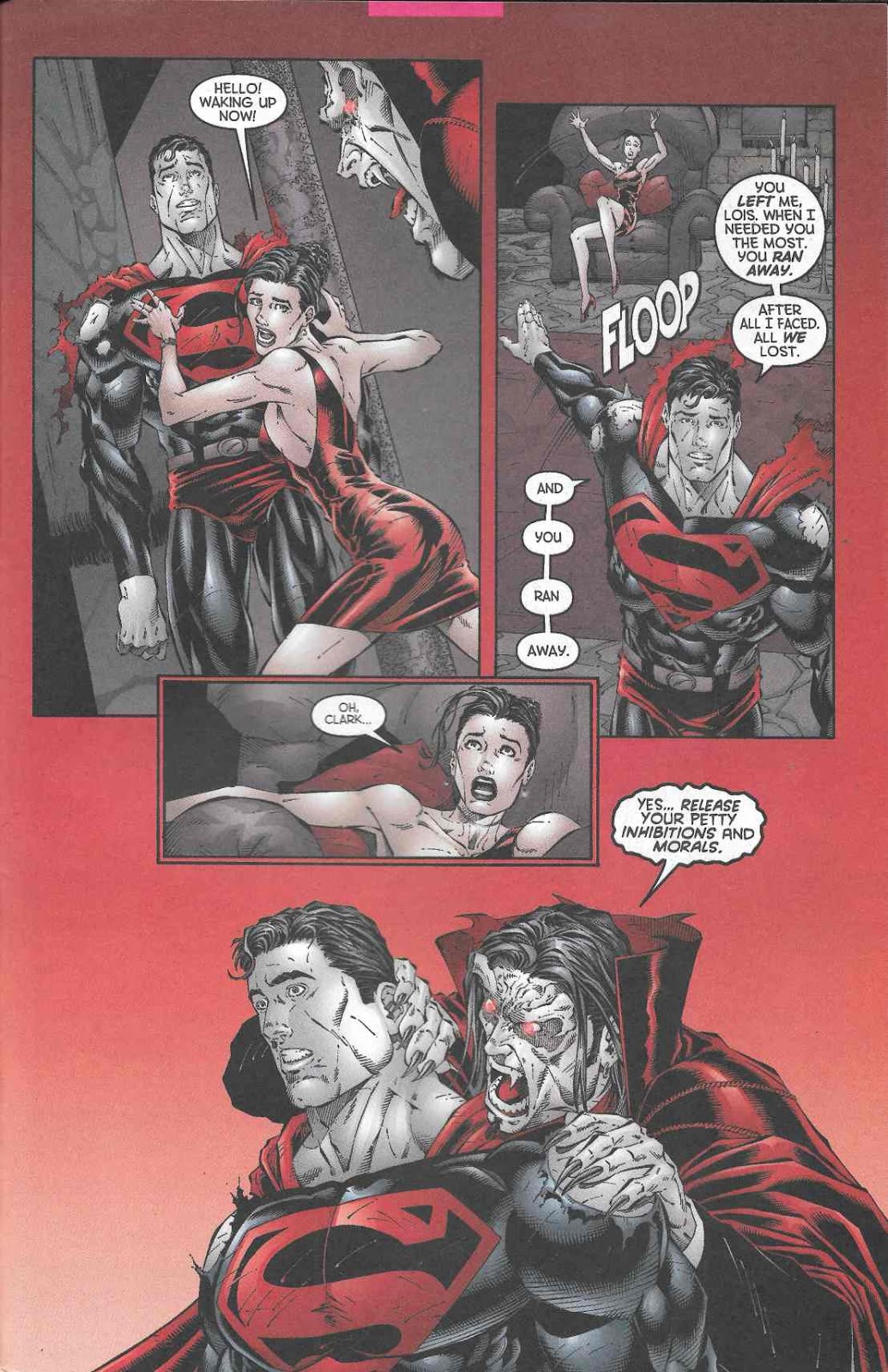 …because just like that, Dracula puts the bite on the man of steel. 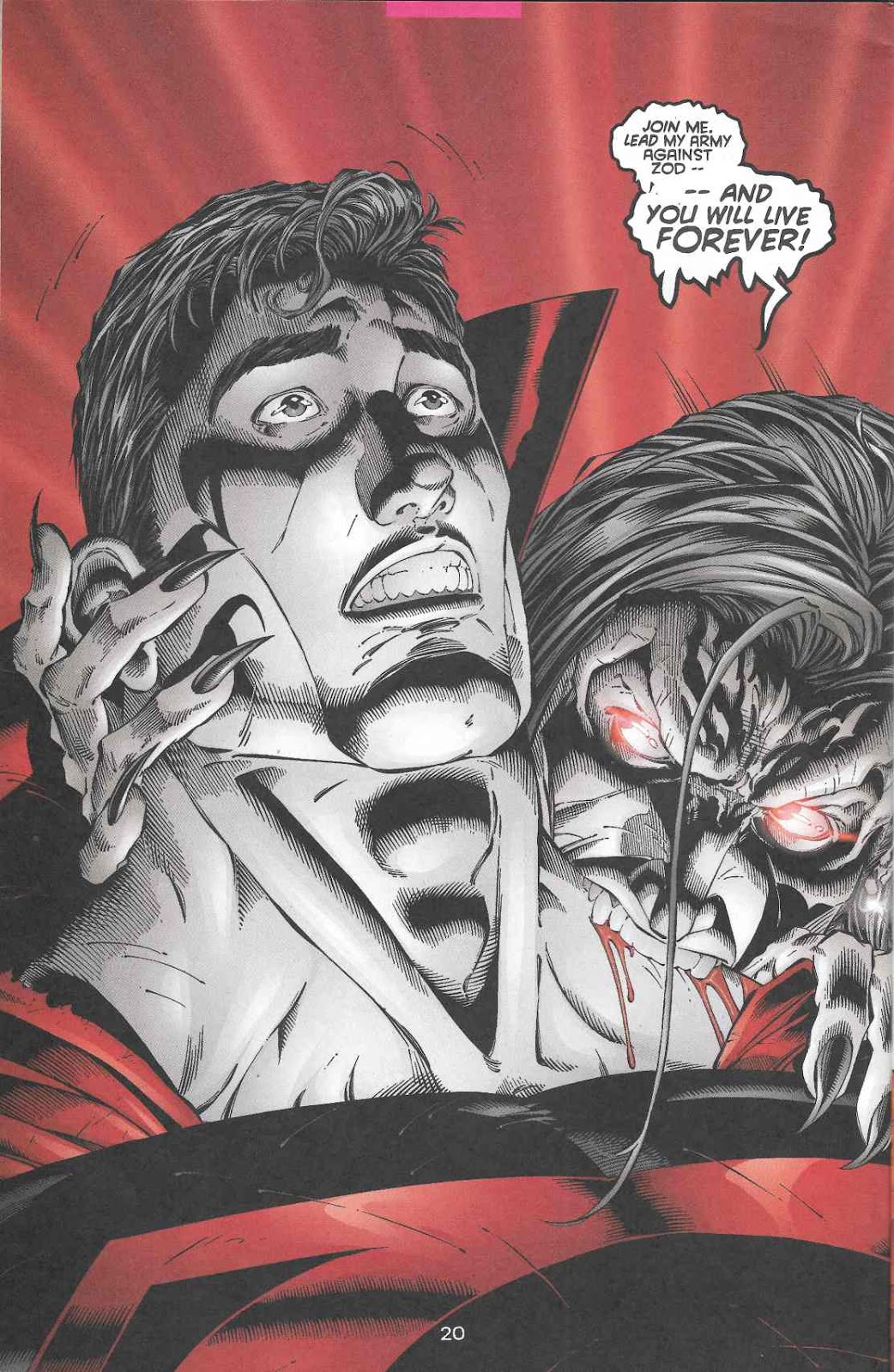 Which turns out to be a TERRIBLE idea, given that Superman’s alien body stores sunlight in his blood cells. Thus Dracula gets an all over tan from the inside, a naughty and fatal case of overexposure. Looks like the winner of this match is Superman. 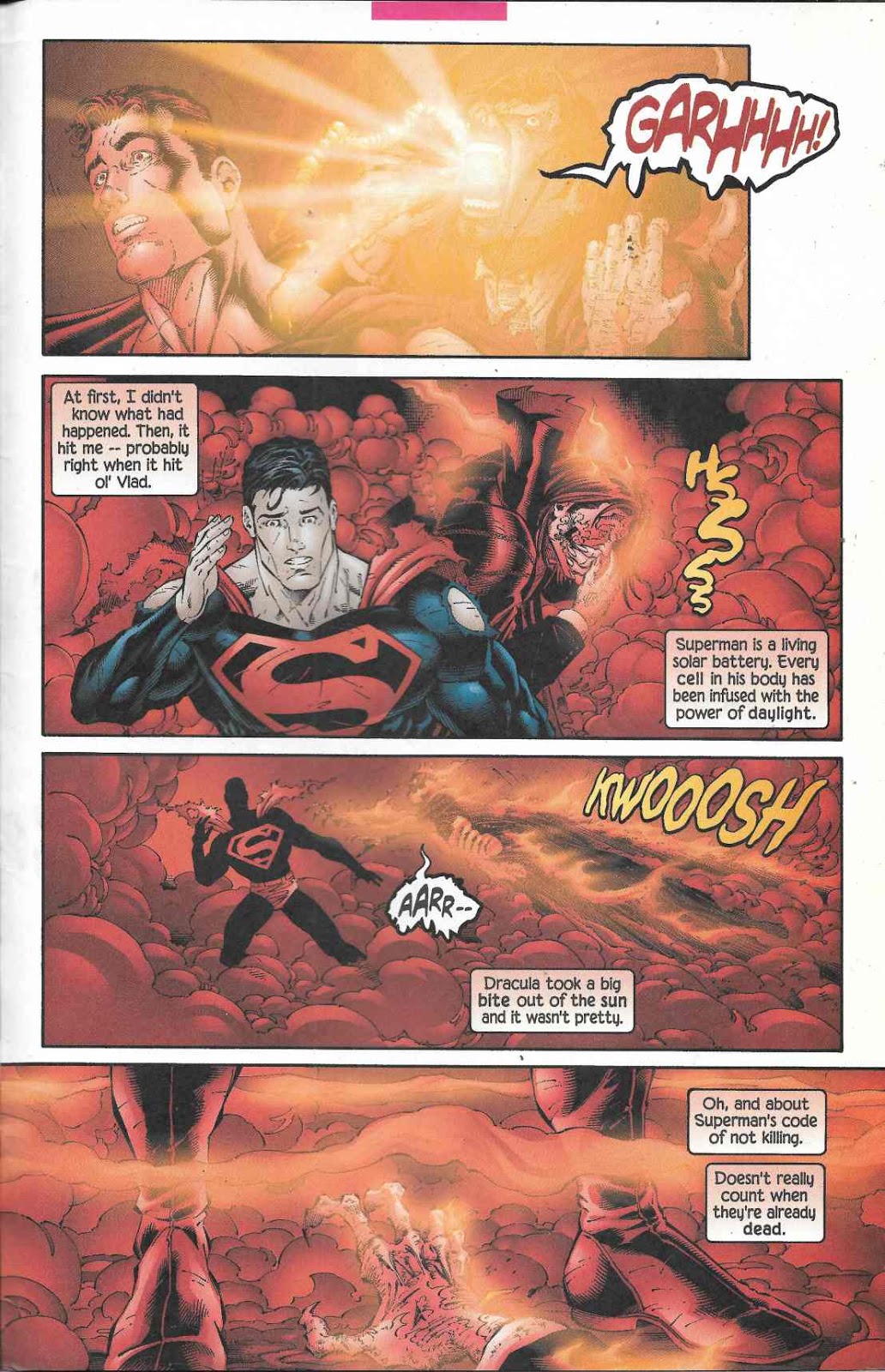 Jimmy arrives next, tumbling down the stairs slow enough that Superman can jump into his Clark disguise. No clue how Jimmy isn’t as dried up as a kid’s juice box after lunchtime, but no matter. Our characters are all okay… 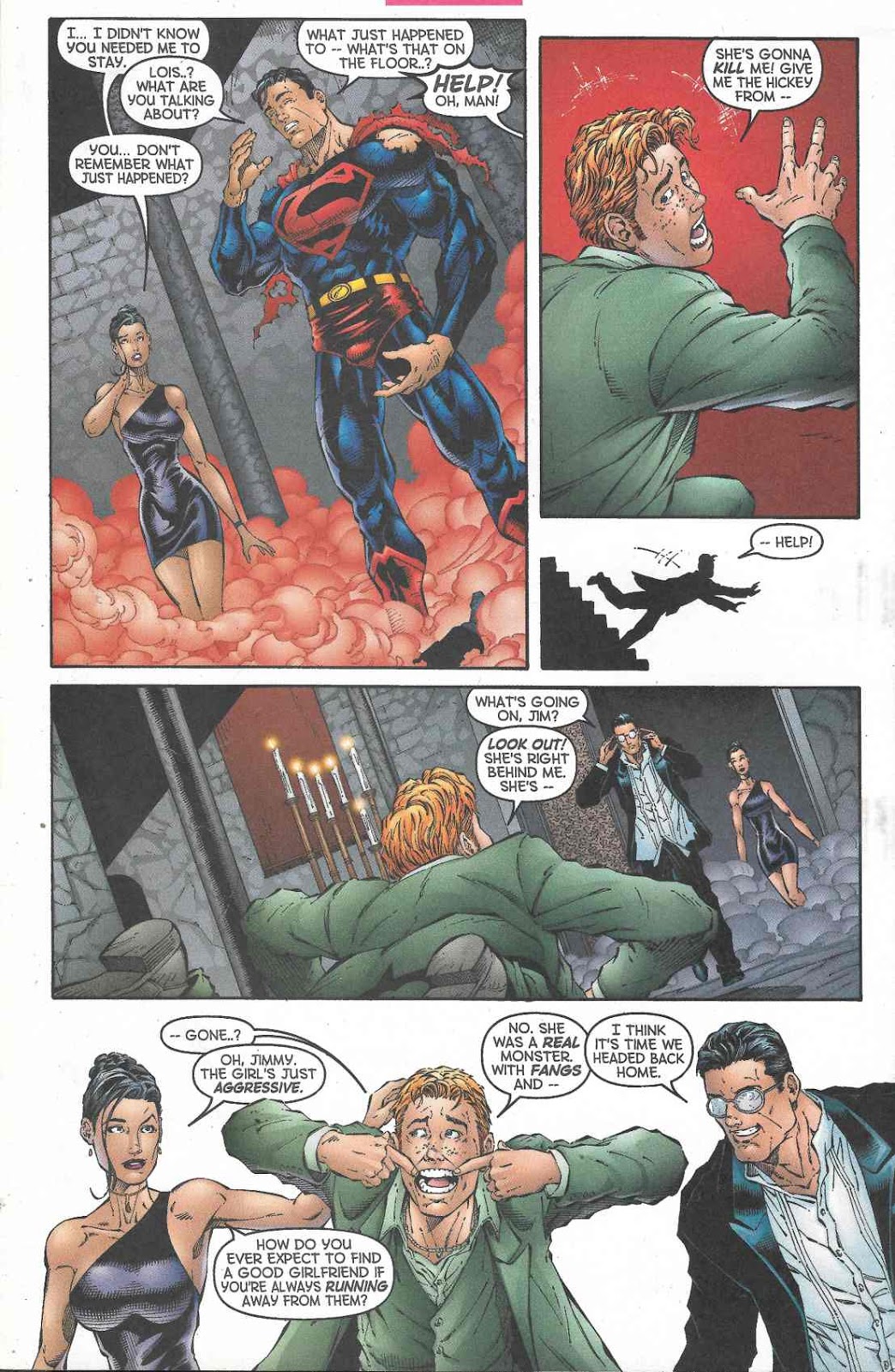 …and as they head out, they even mention the possibility of “Creature Commandos,” which, now that I think about it, is a Marvel title. 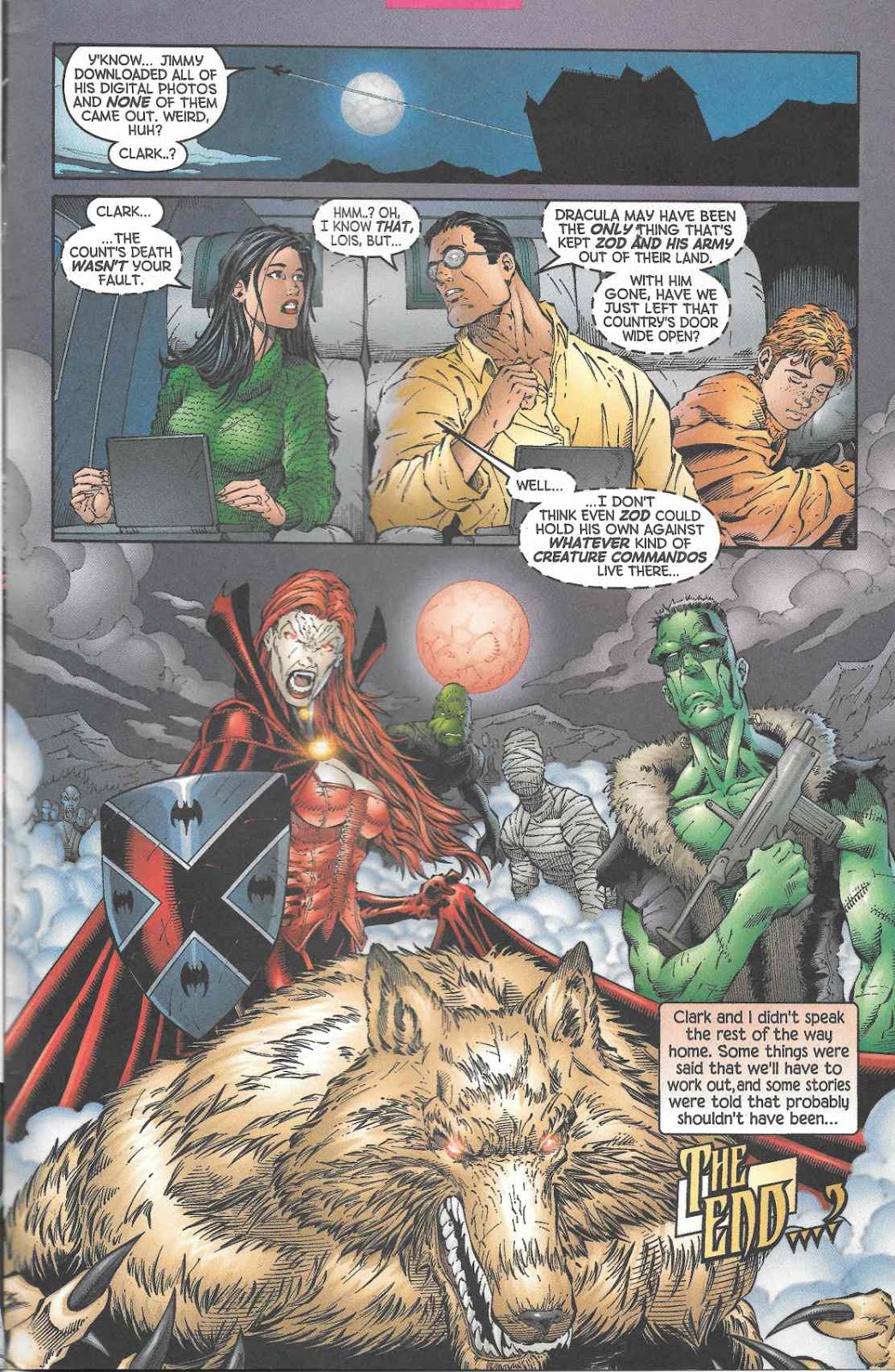 All-in-all this is a decent tale but is a tad bit off-beat for the man of steel. And Rominoff/Dracula needs a bit more build-up if we are going to take him seriously.

Tomorrow we will watch Dracula match fangs vs. swords, as This Week Sucks! continues.
Posted by SonOfCthulhu at 2:18 AM