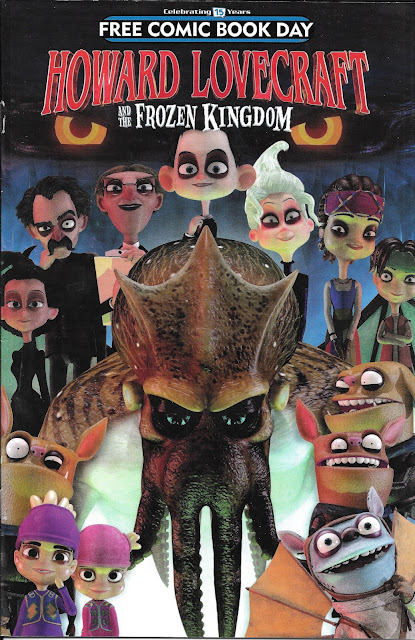 That which has been seen cannot be unseen!

There are very few books in the Crapbox that make me angry.

Some that aren’t my bag, story-wise or that make unfavorable decisions when it comes to art or plot or character or tone.

But I don’t get mad at them. I understand that the creatives in charge of that property and I have differences of opinion. There is no one right way to tell a story, there are just a multitude of choices that authors and artists have to make. I don’t hate their products so much as don’t understand why they chose to make them (in my view) flawed.

And that shouldn’t be. It shouldn’t be because this book takes a look at one of my favorite authors and some of his most popular creations. Certainly, it kid-friendlies them. Removes all of the horror elements and cutie-fies them. And I understand why, the book is written for younger readers. I don’t see anything wrong with doing that.

I have grandkids, for goodness sake! This type of introduction to the mythos should be right up my alley. I mean, I’m cool with “C” is for Cthulhu, John Kovalic’s My Little Cthulhu, and R.J. Ivankovic’s Seussian “H.P. Lovecraft’s The Call of Cthulhu.”

But where I feel that those items still respect the source material, I feel that this excerpt from the graphic novel of the same name does not. Not to mention, that it continues to do so as it is one in a series and has spun off at least one animated feature based on the property. These stories don’t treat the ground they are walking on with enough reverence and they destroy certain aspects of Cthulhu that I feel dumb him down in a very detrimental way.
And it’s not just me that feels this way. The top comments on YouTube for the trailer for the movie based off this property are as follows:

“This is why the Elder Gods won’t talk to us.”
“You can almost hear Howard spinning in his grave…”
“Lovecraft doesn’t deserve this.”
“This seems to be very close to the source material, since I literally went insane while watching the trailer.”

Don’t believe me? Don’t believe them? Let’s take a look at the very brief intro to the story that this free preview provides and see if you agree afterwards. 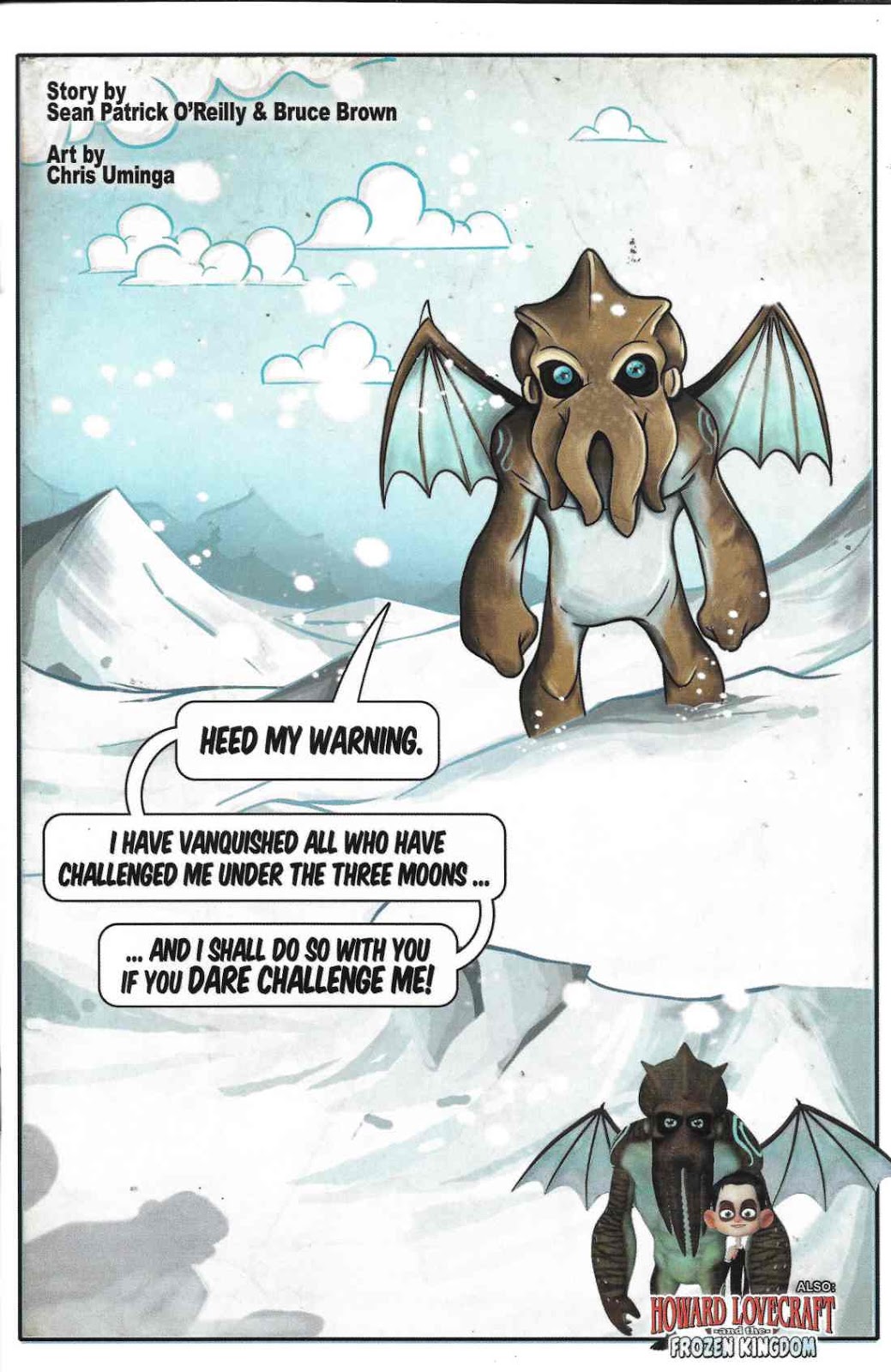 The book begins with dread Cthulhu speaking (in English) a dire warning to anyone who would challenge him. The character design in this is acceptable, with Cthulhu’s hard edges softened and rounded out for good measure. On page one, I’m not feeling the revulsion yet, but just wait. It’s coming. 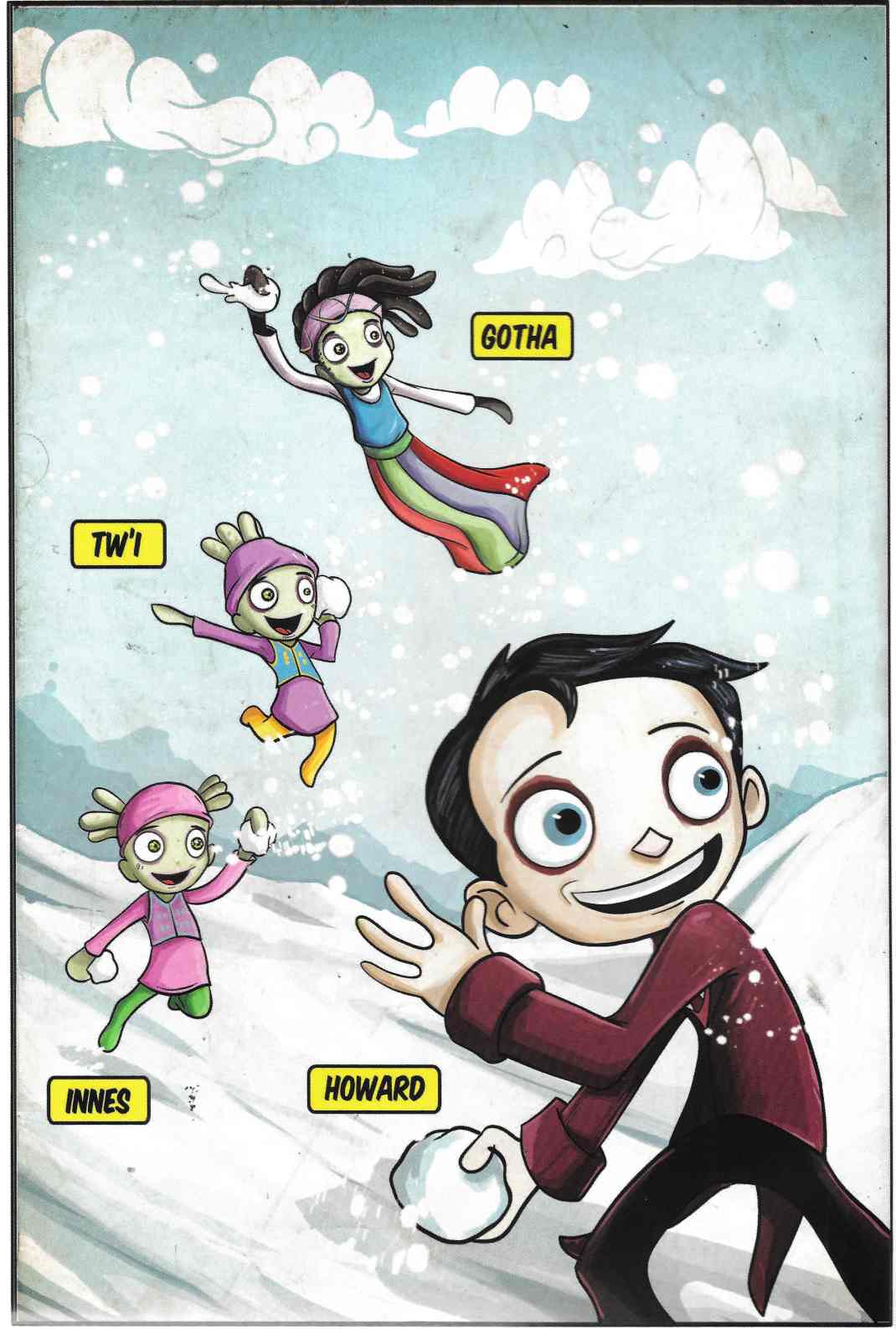 Page two is a splash-page and it introduces our other castmates and Howard Lovecraft. By “introduces” I mean it states their names. Nothing else about these horrid little squid beings is told to us. We are expected to pickup context from the story, what little of that there is, or to go buy the MOVIE where they are properly introduced. 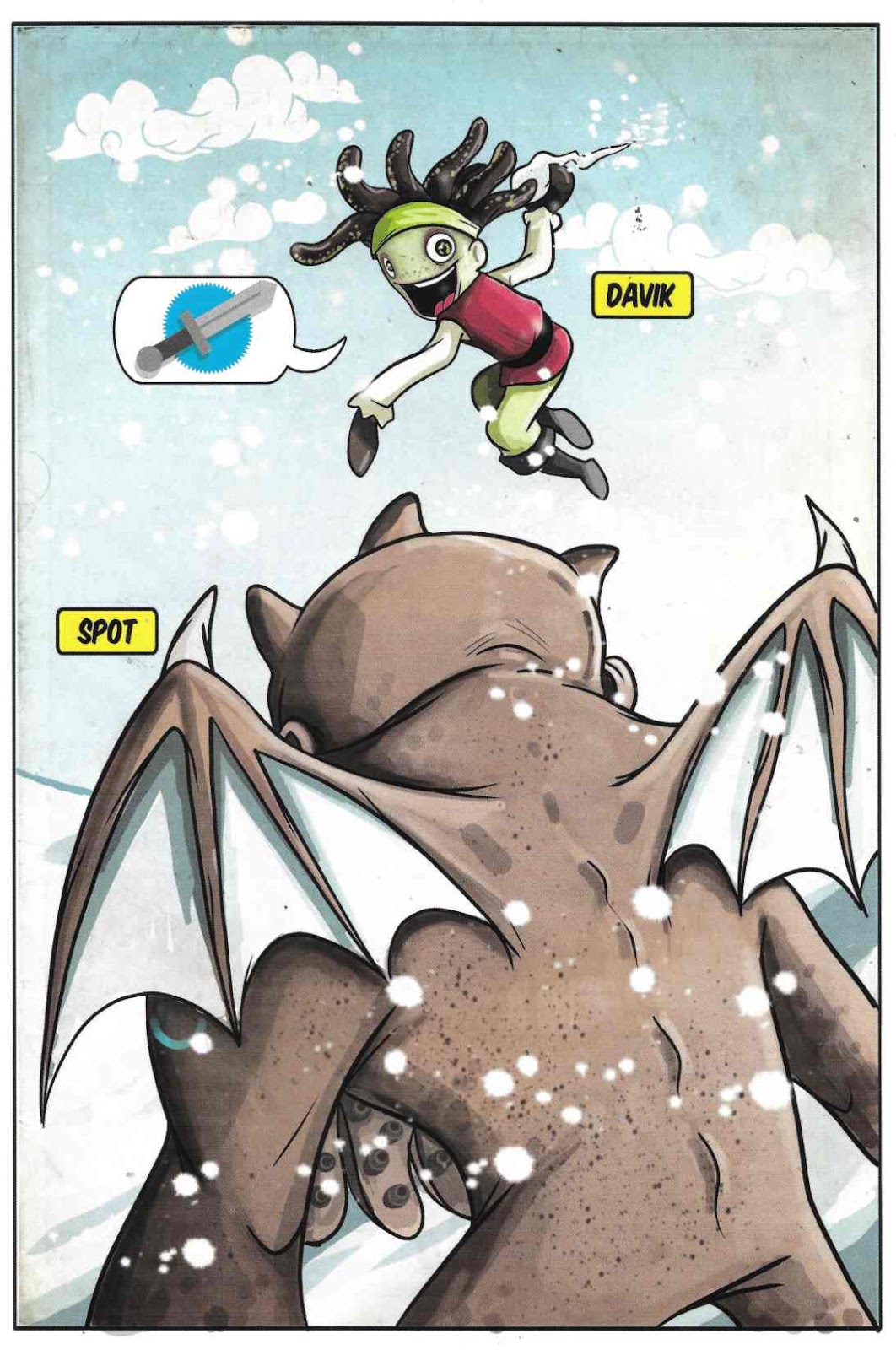 Page three is the second part of this splash-page and it’s here where the real trouble starts to become evident. First off is Davik, the squid person who speaks only in symbols. I have no idea how that works in a non-graphical medium, but I can state it shows the authors had very little idea how to set the characters apart from one another. It smacks of laziness.

Secondly, we show that Cthulhu has now been dubbed “Spot.” This was done in one of the trailers I saw and it is pain inducing to watch. Howard Lovecraft, who loved obscure languages and foreign tongues, can’t pronounce the name of his greatest creation. So, he nicknames him “Spot.” Spot is a name that an uninventive child would call his dog.

Two things about this second annoyance that grates on me: 1.) Lovecraft was never an uninventive child and 2.) Cthulhu should never take on the role of “faithful dog.”

Lastly, it appears everyone has ganged up on Cthulhu in a snowball fight. Now you might think this would be an issue for me, but seeing Cthulhu in a child’s snowball fight isn’t a problem. I get the story is going for the under-7 age group. 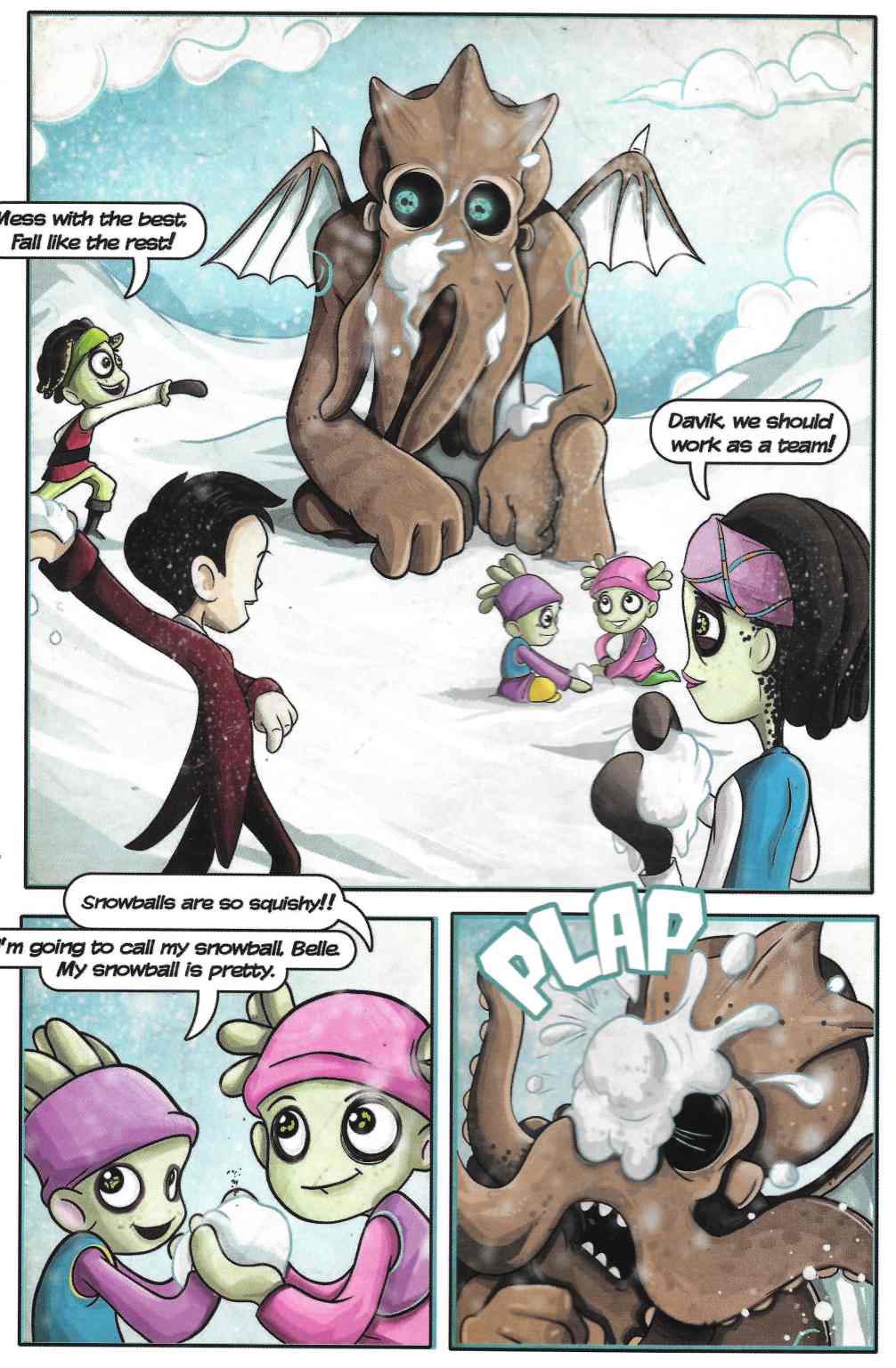 However, Cthulhu not understanding how to fight back in a snowball fight? To the point that Howard has to explain to…grrr!...”Spot”… how the game works?... 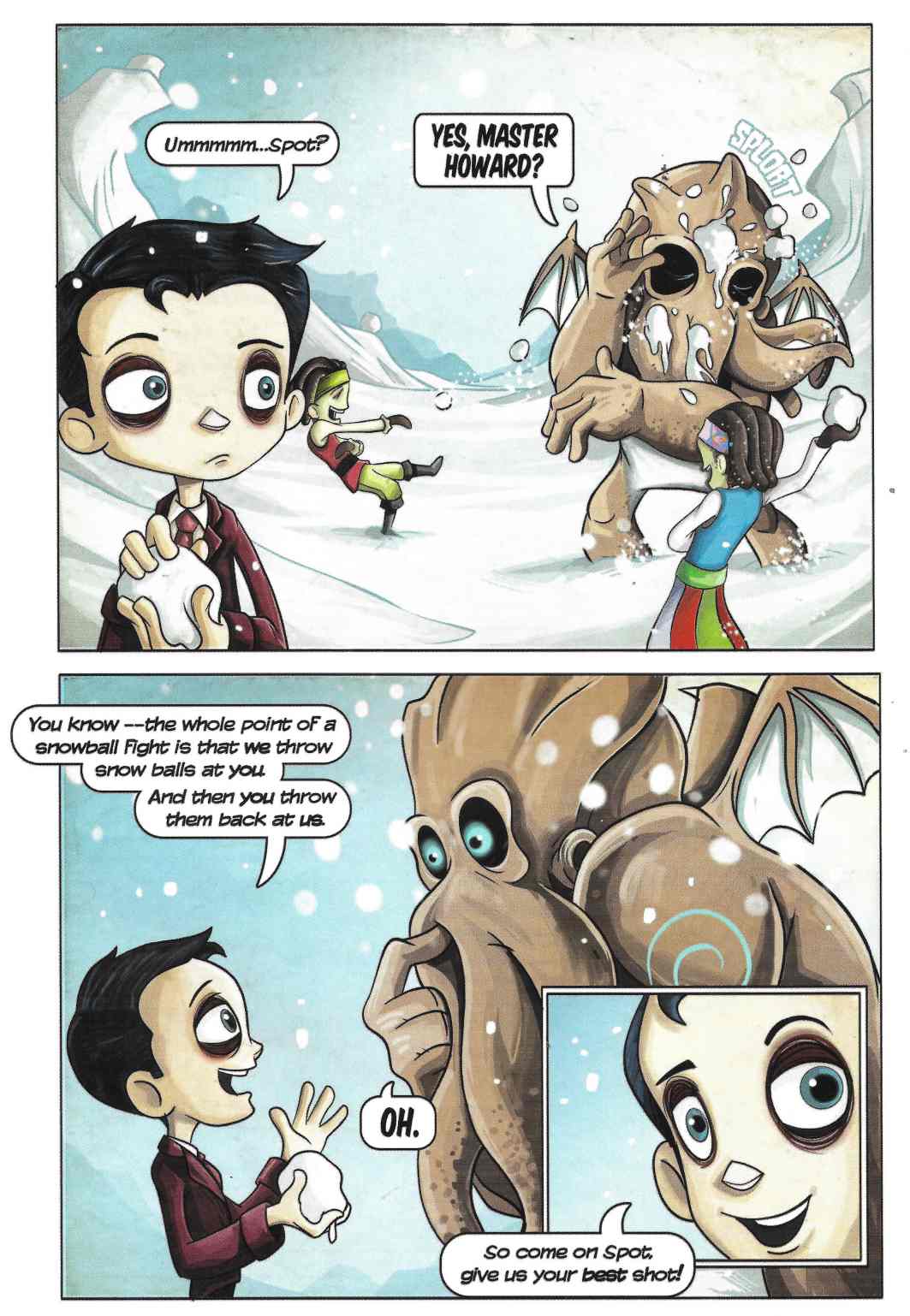 …that’s pretty insane. How stupid are we supposed to believe Cthulhu is in this?

Oh, and I just noticed that Davik sometimes DOES talk in real words…except, wait! That isn’t supposed to be him. It’s supposed to be Howard. The word bubble got mis-attributed.

Anyway, once it is explained to…arrgh!...”Spot,”… he does his best to level the field of all opponents. 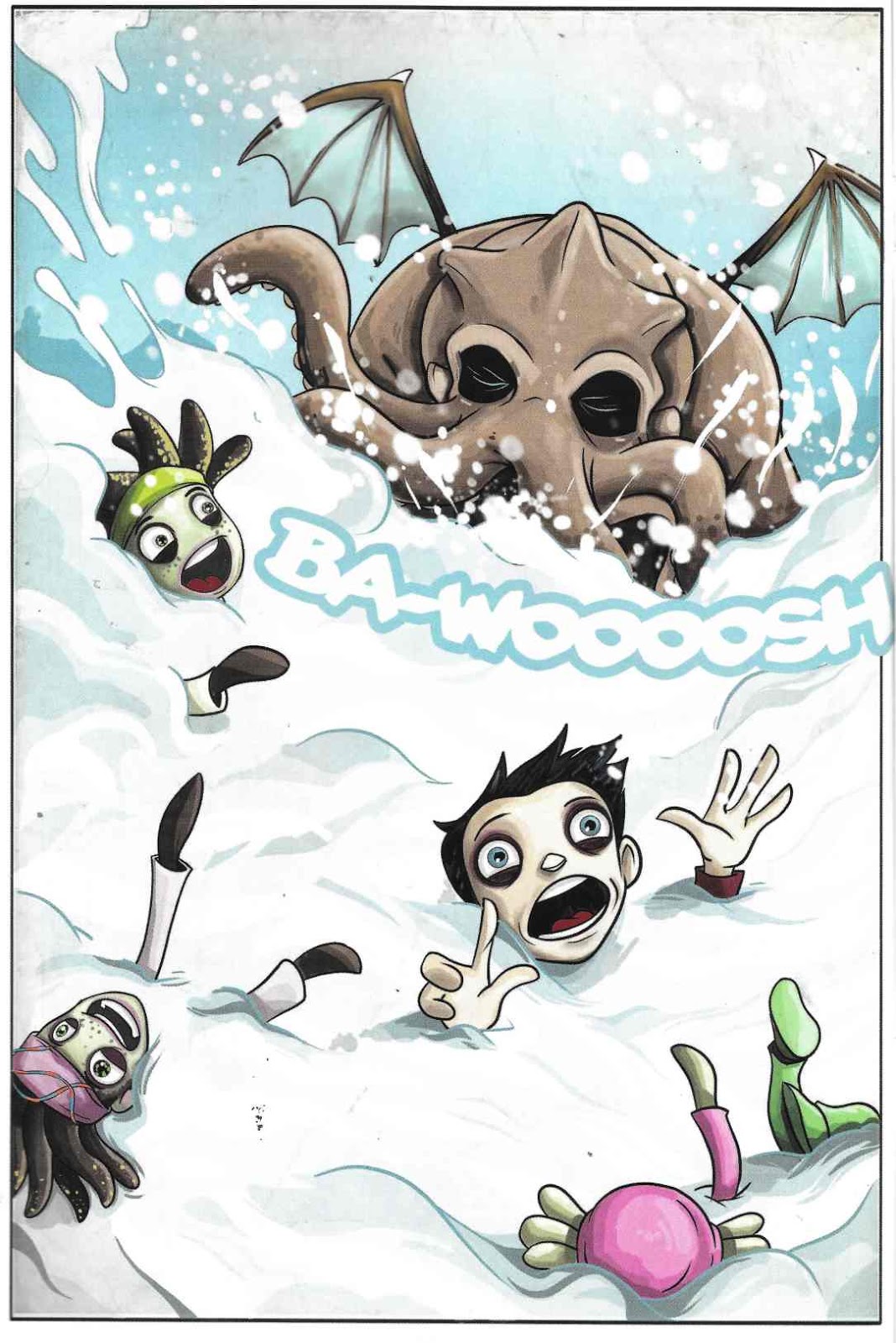 An overkill event that leads me to my next MAJOR annoyance: Cthulhu first extract the kids at Howard’s askance and then CALLS HIM “MASTER” like Howard is the owner of Cthulhu’s magic lamp or something. Uh,…this isn’t the way to introduce the mythos, guys. You are disrespecting the source material to a wide degree. 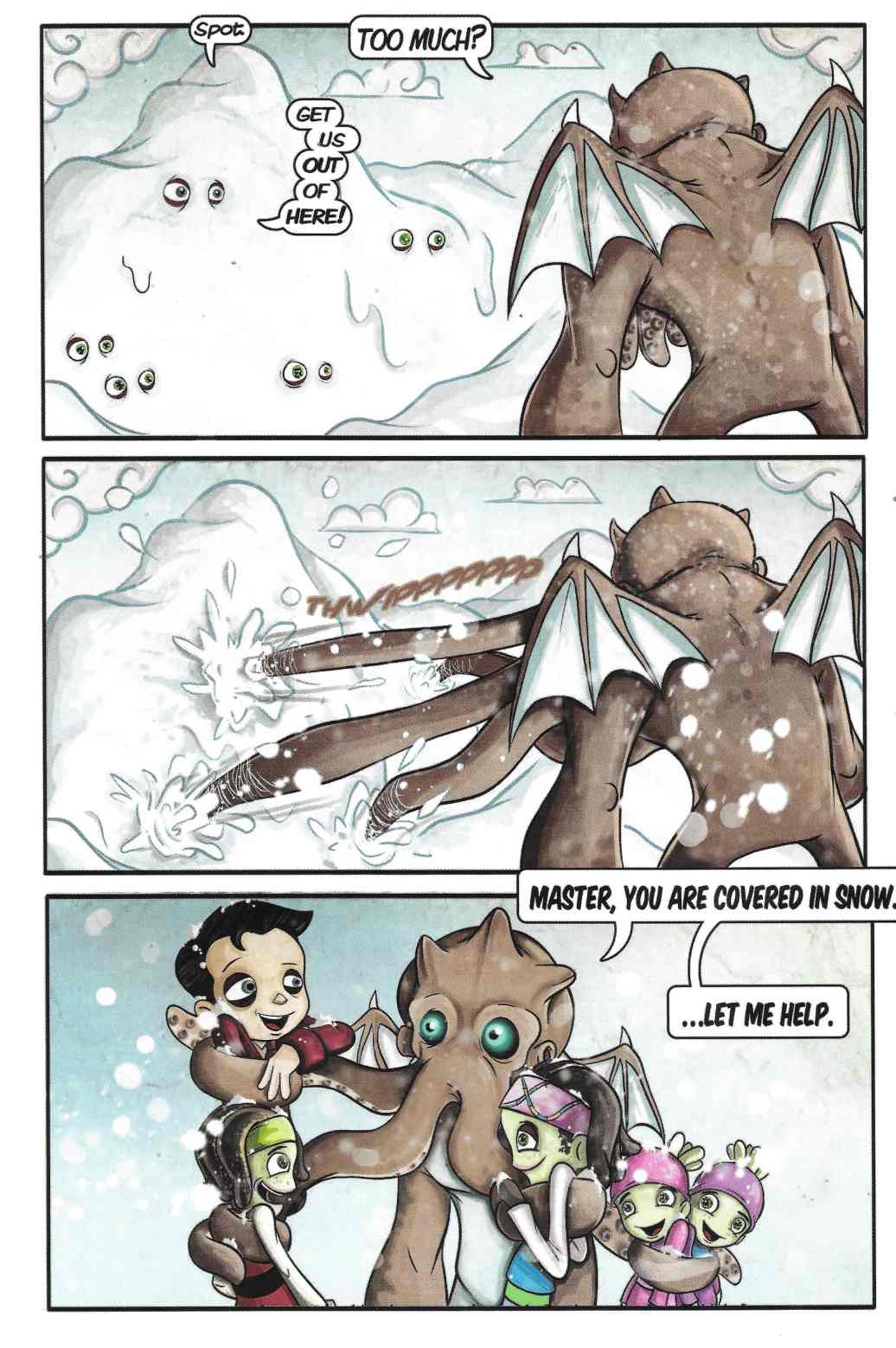 I can take a kind, humanistic take on Cthulhu, but please! Don’t turn him into Barbara Eden from “I Dream of Jeanie.”

Then Cthulhu spins the kids like a carnival ride and Davik loses his…crab-sicle? I have no clue what this is supposed to be. 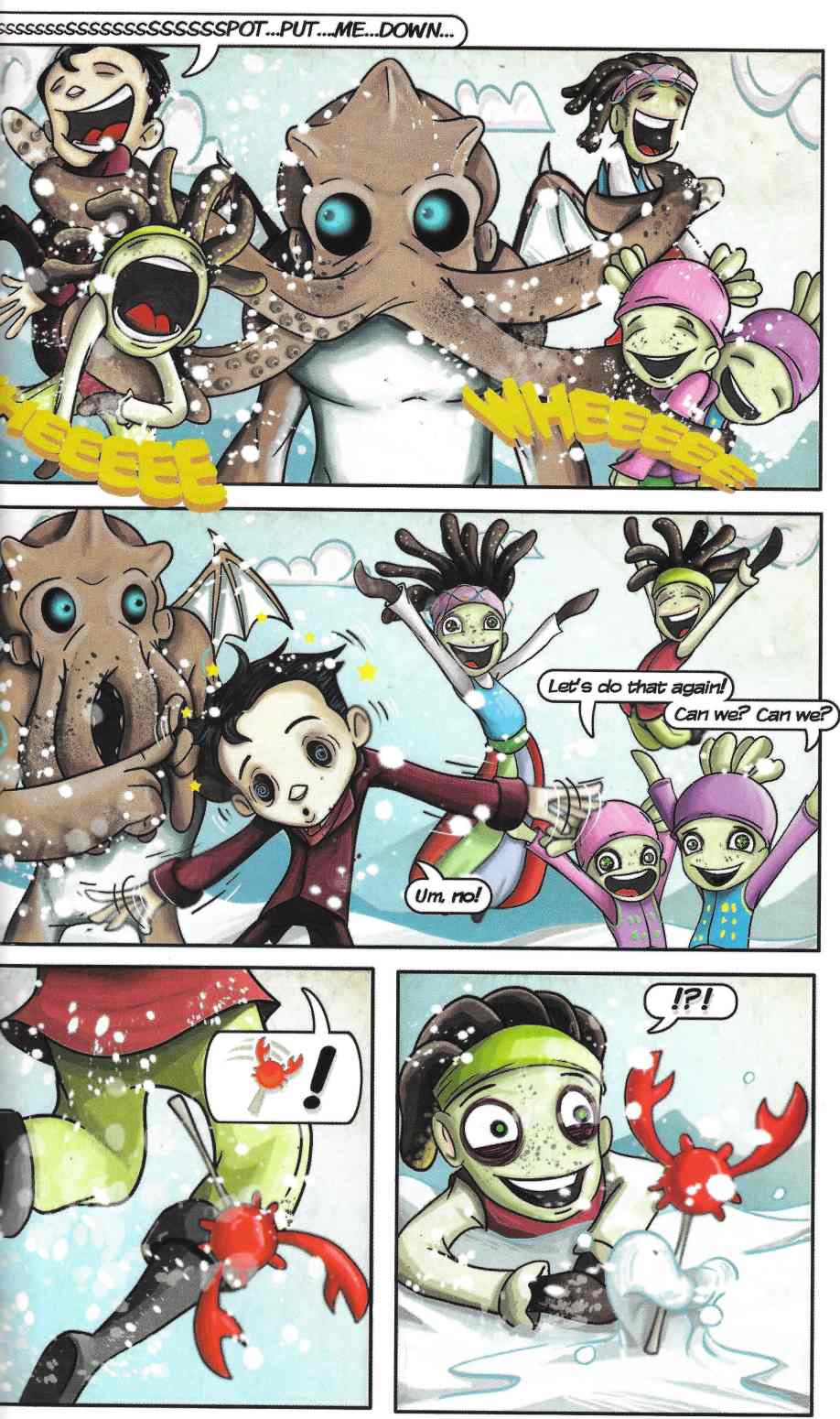 Nor do I understand why a snowman suddenly appears. Maybe Davik is Elsa’s long-lost cousin? Not a clue here. The story drops the ball big time. 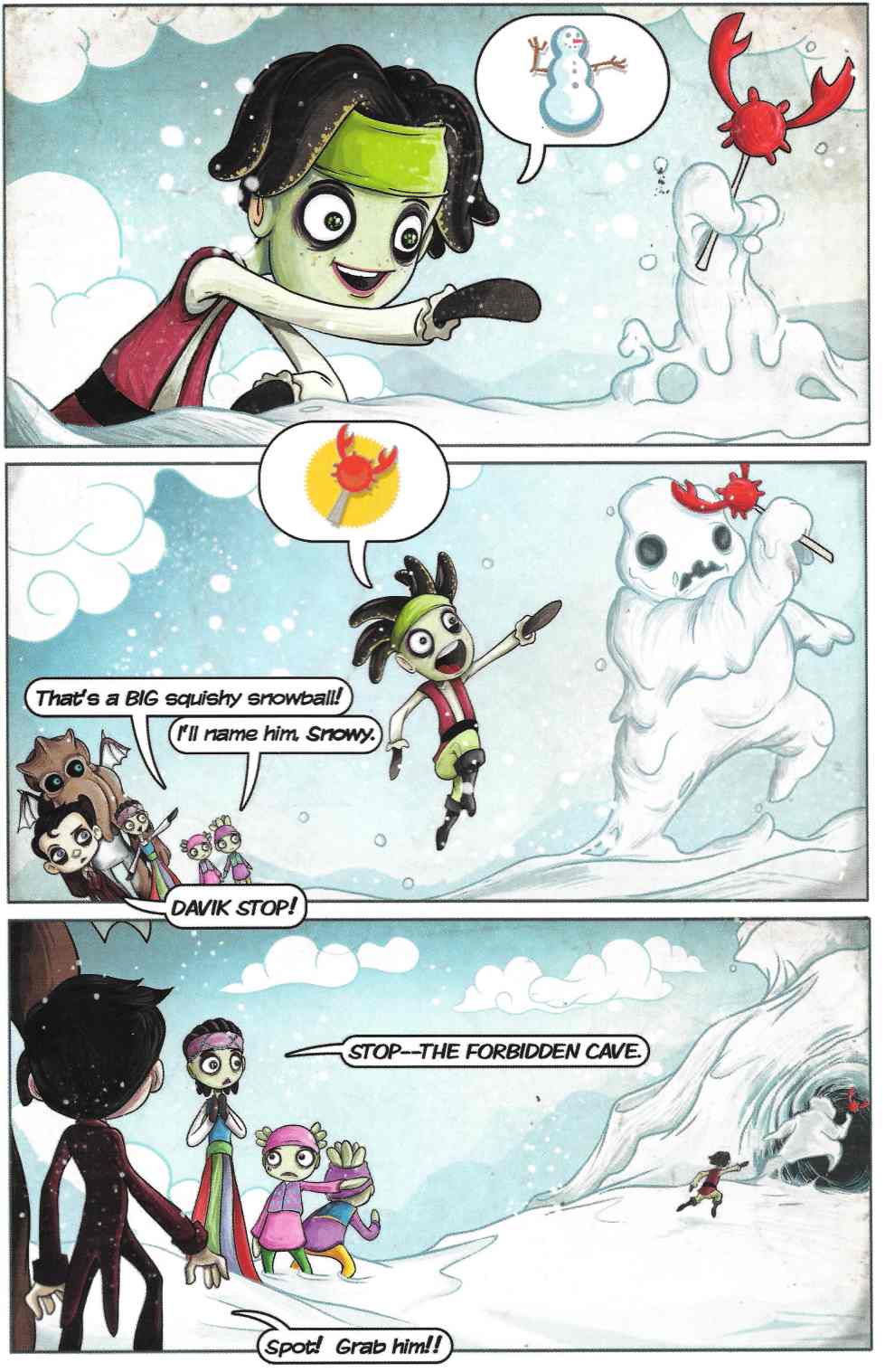 And we have a “forbidden cave” which sounds like a good place to start an adventure. Or maybe end one. Lovecraft’s tales did end in madness and death for almost all involved. I could certainly stand to see all these characters die horribly in a forbidden cave. Go, Davik! Go! 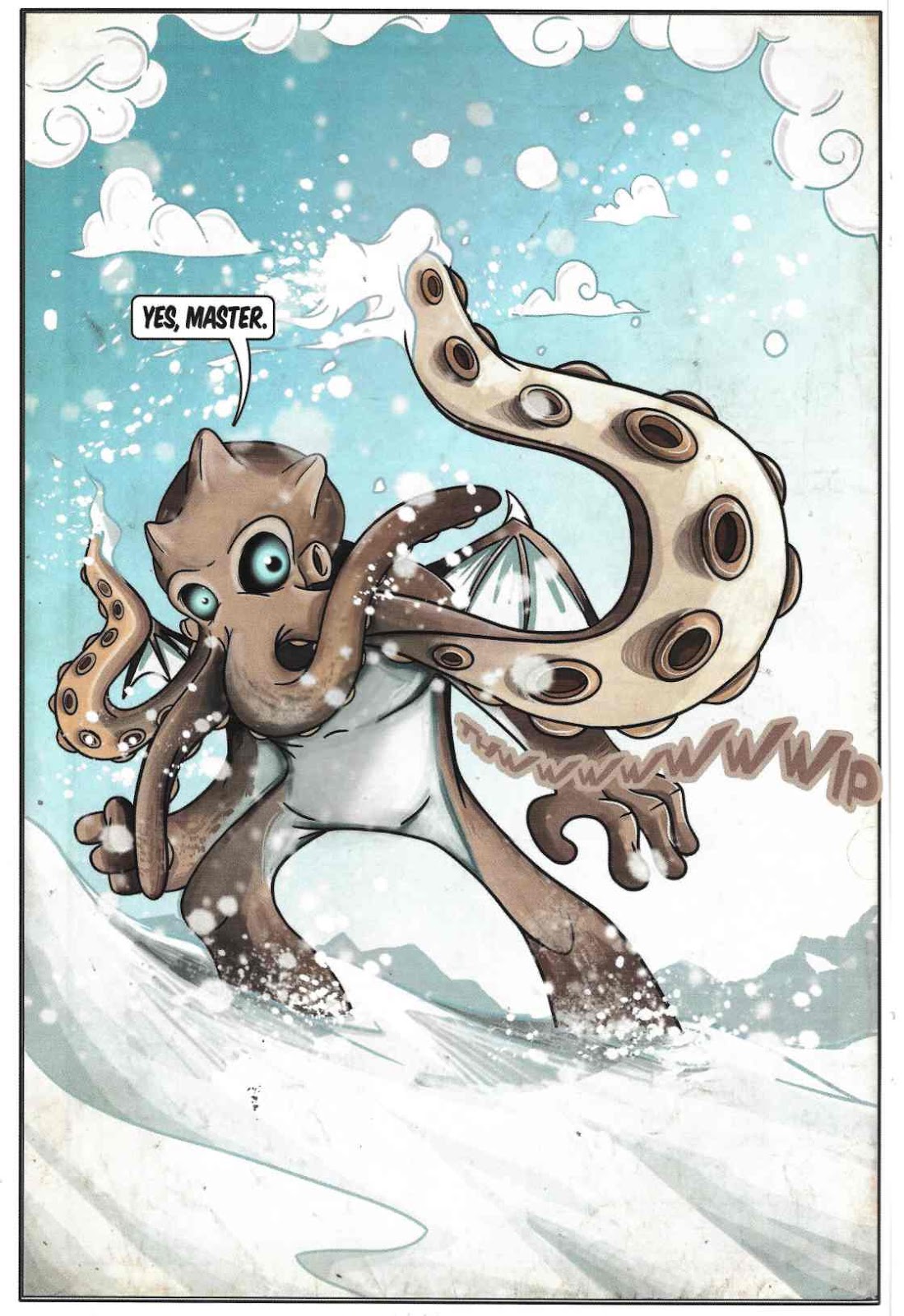 But no, Cthulhu stops him. And utters that phrase that drives me INSANE with rage. Cthulhu. Is. NO ONE’S! SLAVE! 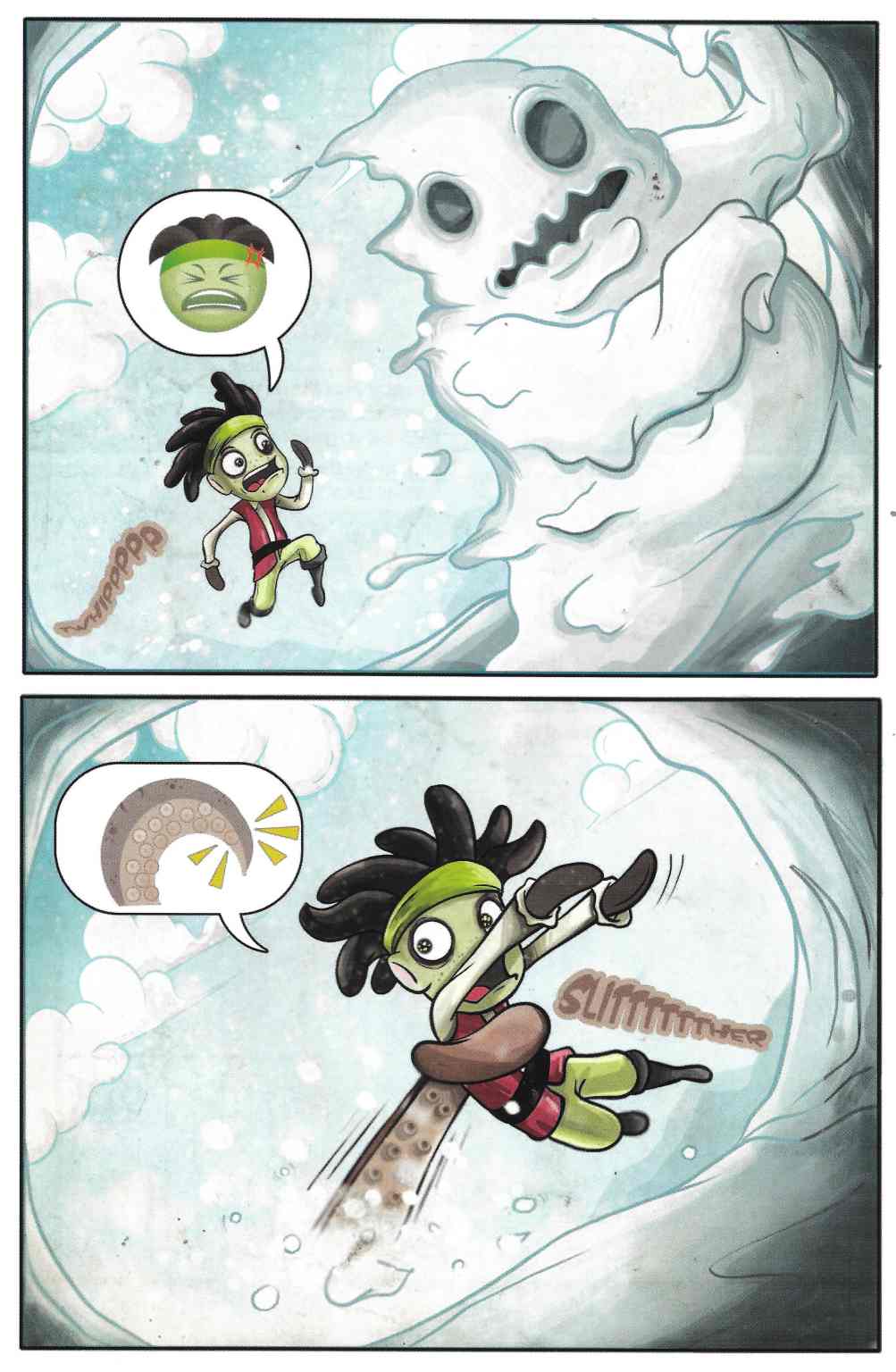 Davik is “saved” and I’m supposed to feel good about this, but I really feel let down that he wasn’t murdered in the most awful fashion. Followed by the rest of the cast. Including “Spot.” And then me, because I can’t unsee this crap. Instead we learn how much of an idiot Davik is… 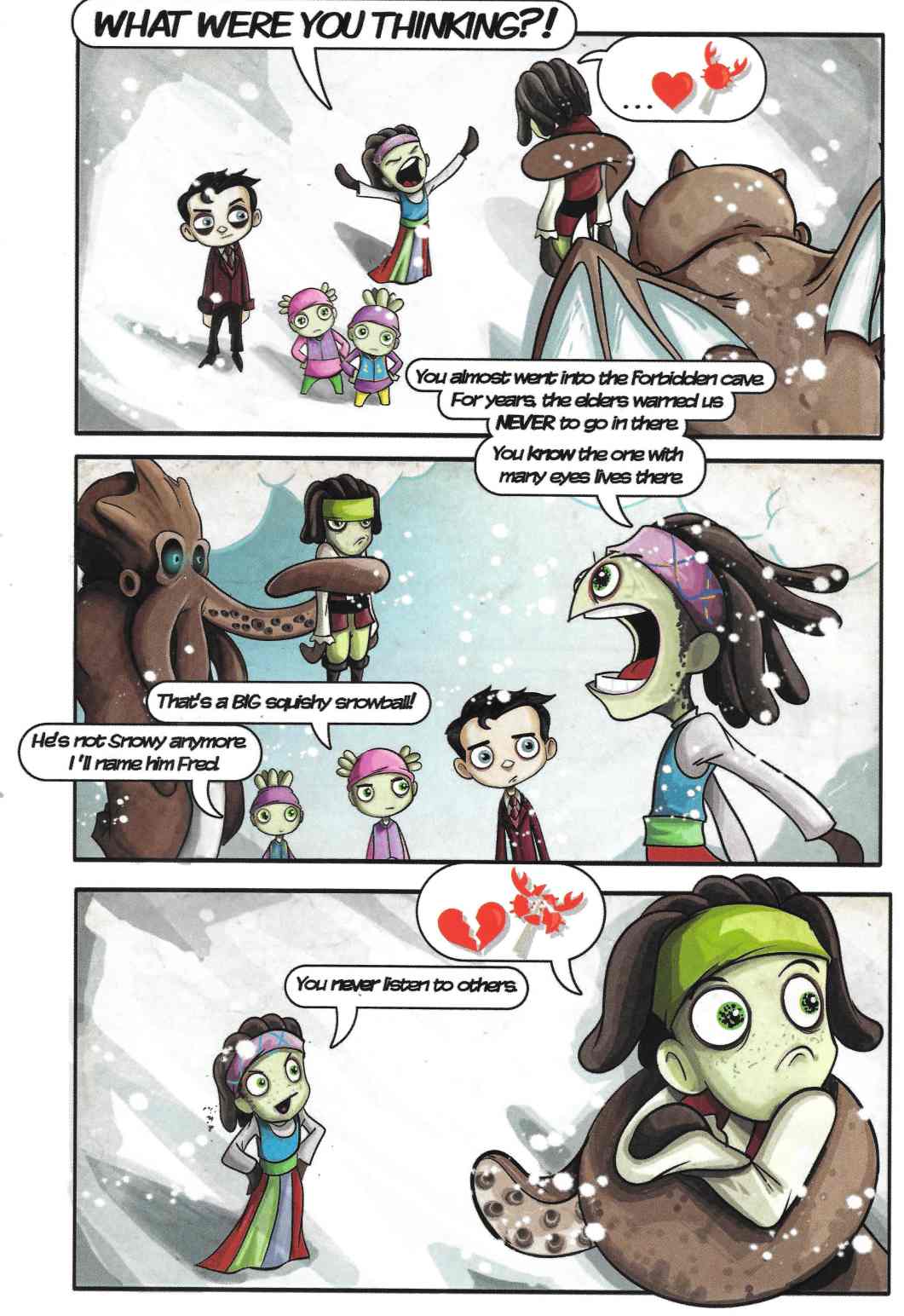 …followed by hearing about the “big squishy snowball” that lives in the cave. 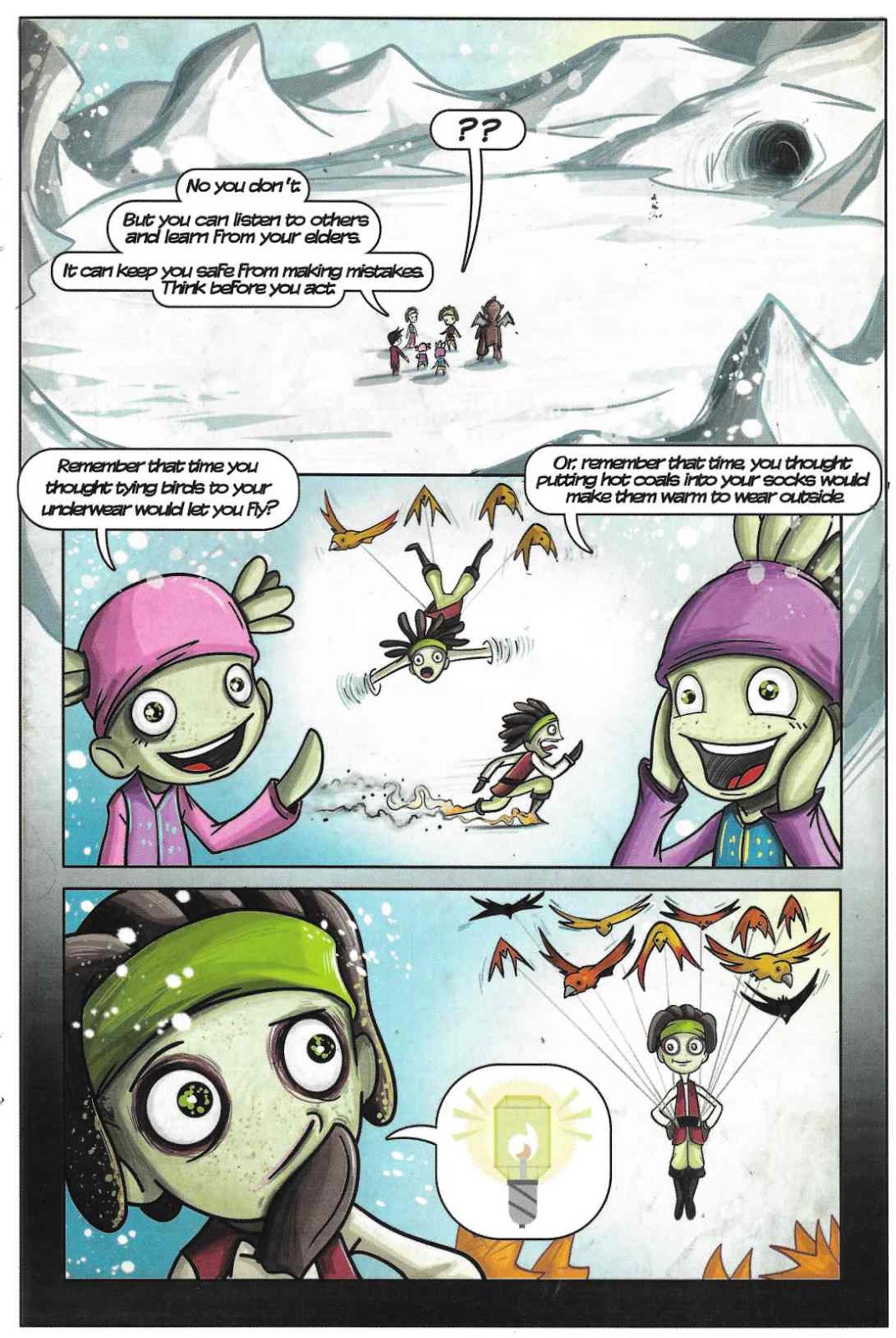 Which is a freaking Shoggoth. I wish for one second this would turn into a real Lovecraft tale and it would turn every one of these characters into an insane, drooling lump of particle board. 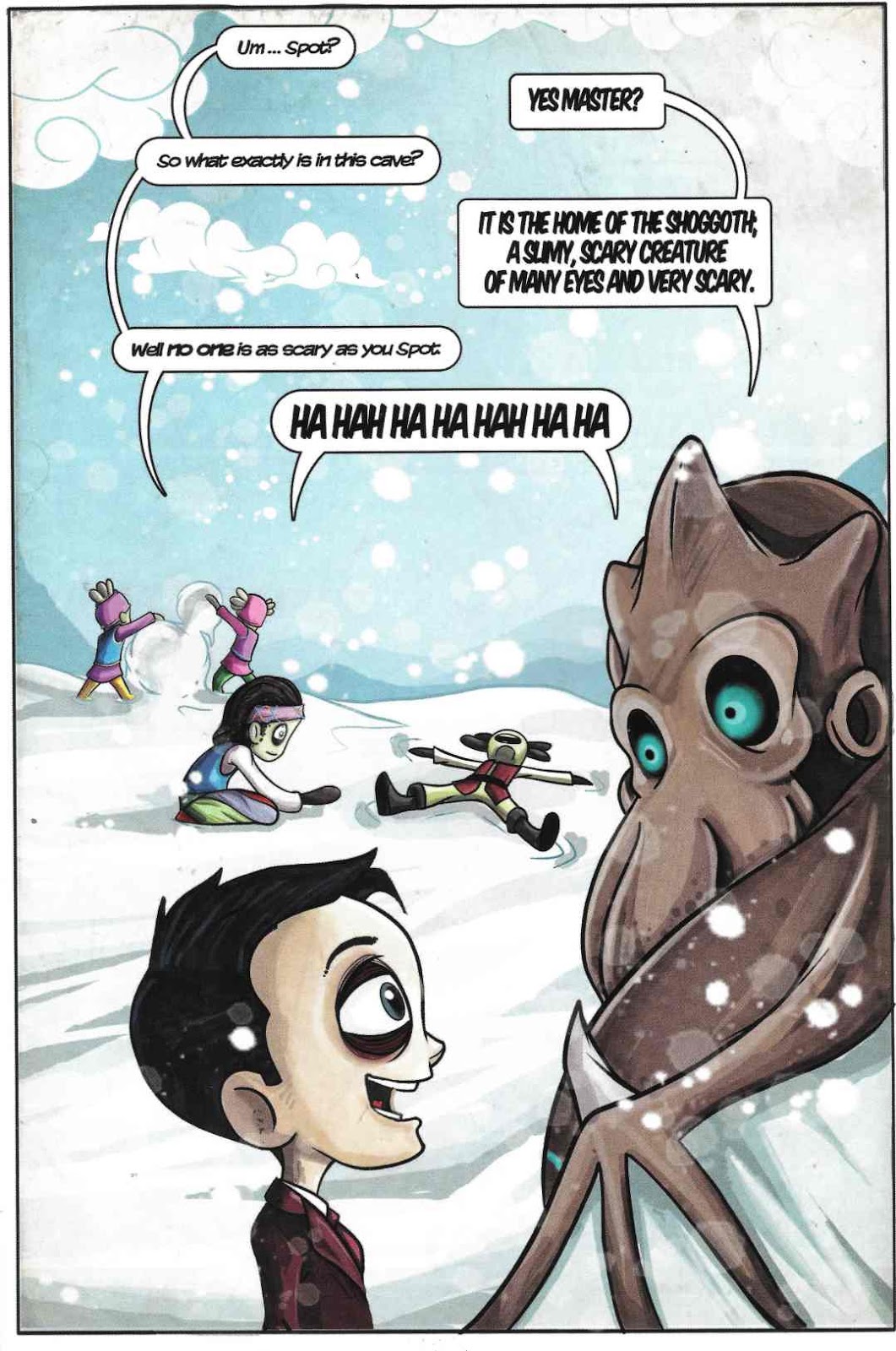 Failing that, at least my misery is over as this is the end of the free preview. The following page is a synopsis of the DVD and book release. 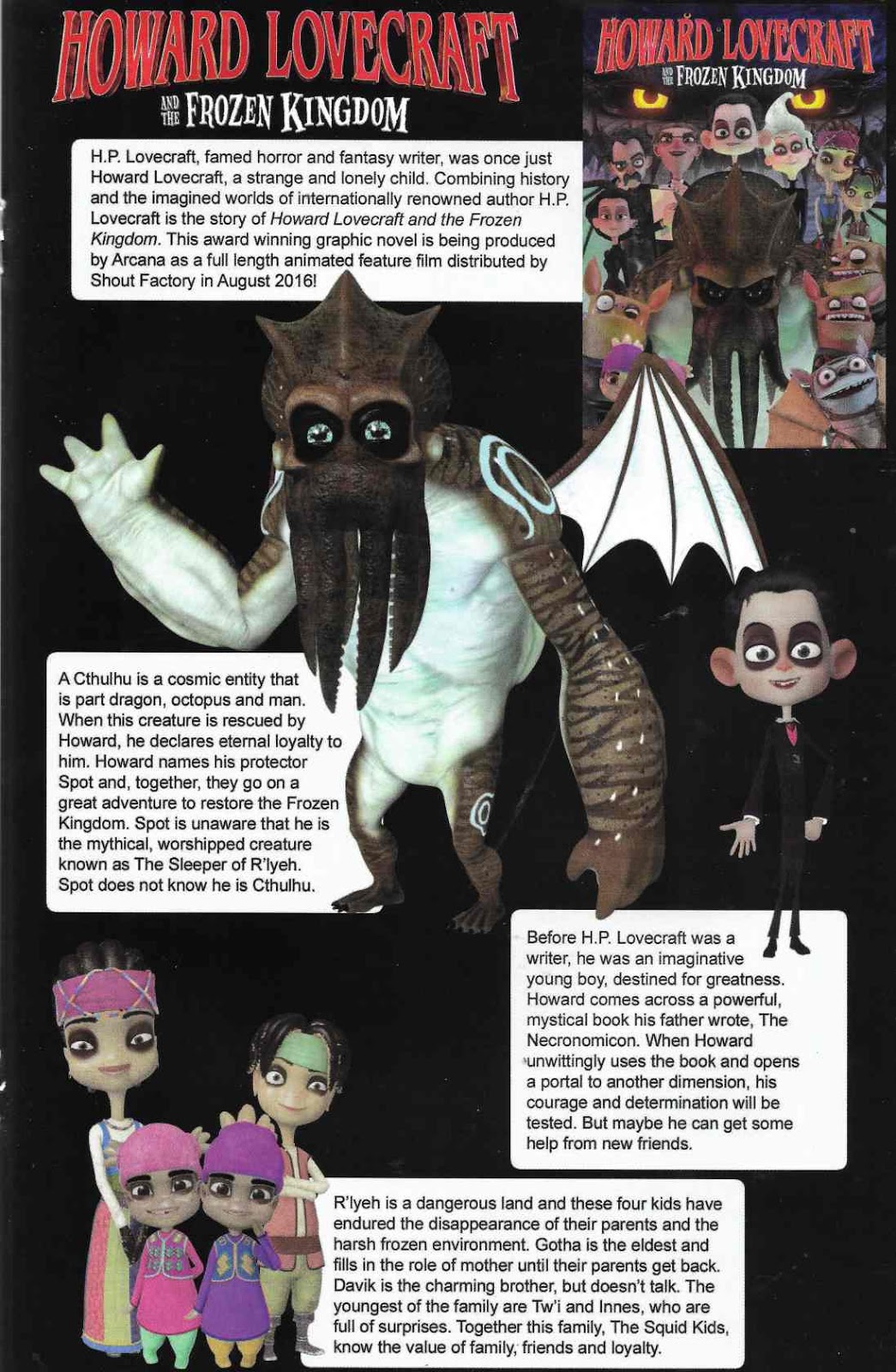 Please don’t buy these. It will only encourage them to make more of them.
Posted by SonOfCthulhu at 10:28 AM