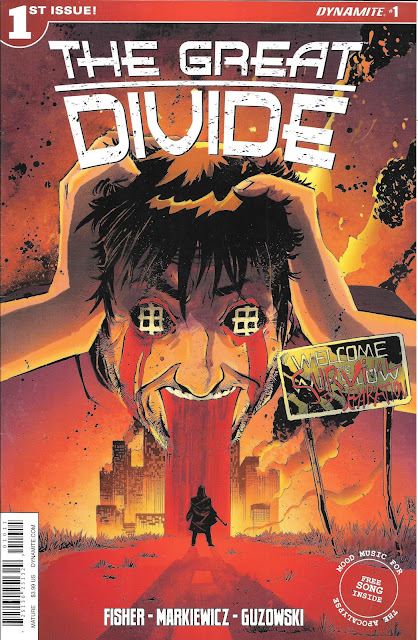 It’s the end of the world (as we know it) and DON'T TOUCH ME!

Here we go jumping into a very different type of horror story from our prior pieces. The Great Divide is an apocalyptic tale of the end of humanity from some type of plague with a very uniquely lethal symptom. Rather than spoil it, I’m going to let the book roll it out for you. I will say, be prepared for a treat.

We begin with a family station wagon pulling in to a dive bar. The Father rushes in with a wild claim… 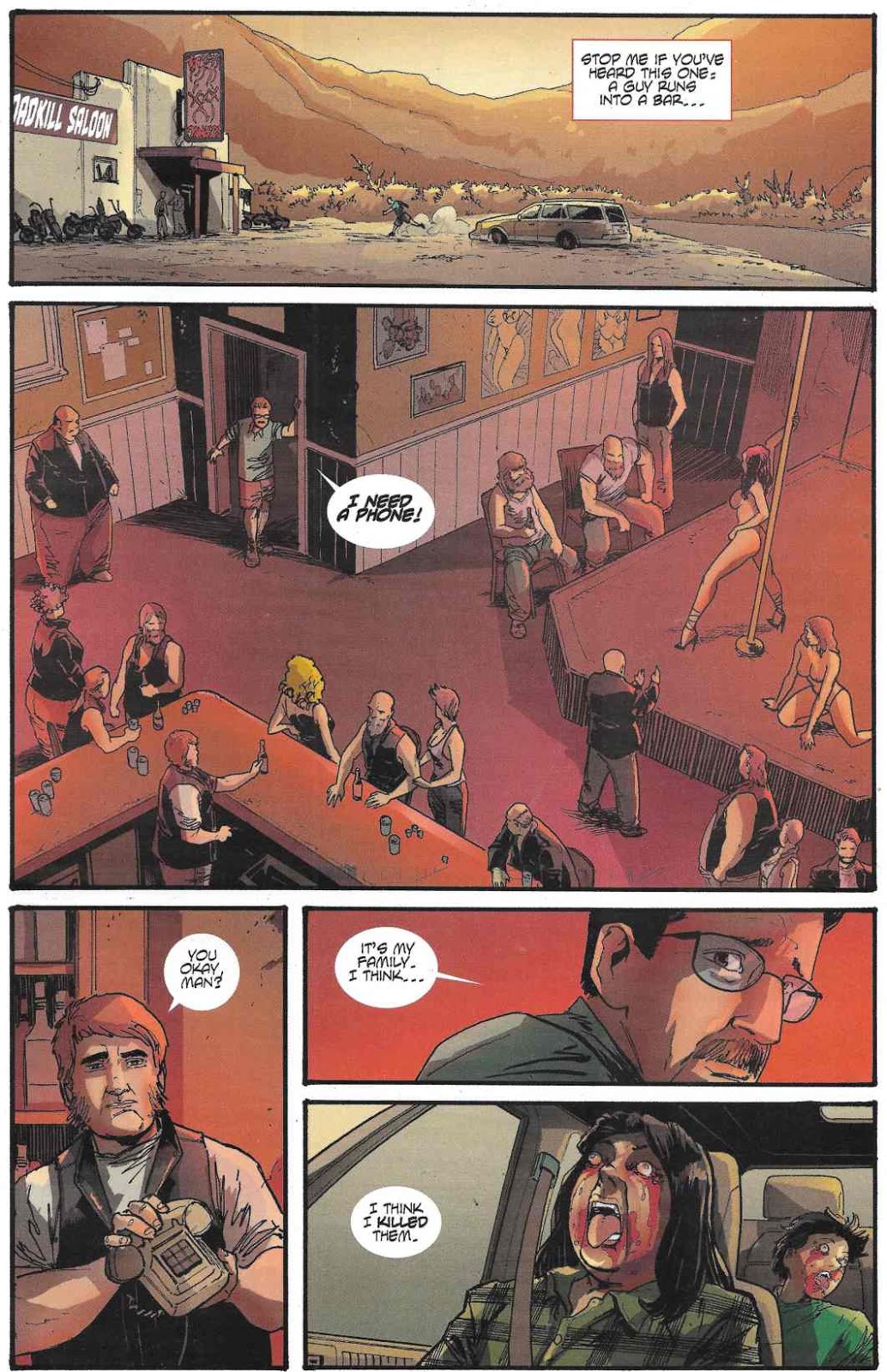 That last panel evokes the beginning of Stephen King’s The Stand a bit, but we aren’t going there. Nope, we are aiming at some really odd territory. Because our bereaved Dad who claims to have killed his family, now claims to hear them in his head. And when a bar patron goes to touch him… 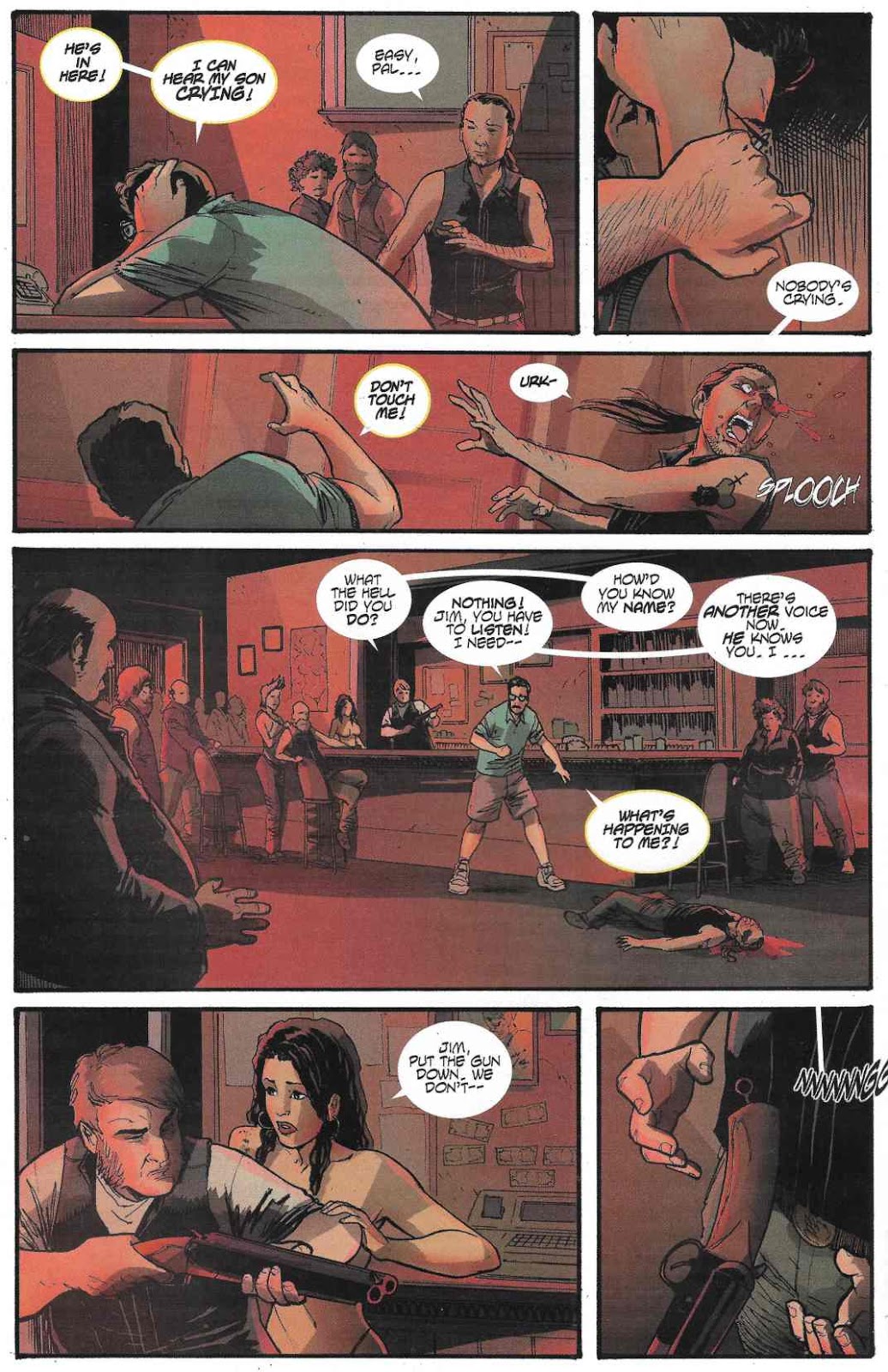 …he ends up dead, his head exploding for no apparent reason. And now the Dad knows the barkeeps name as if he’s been a customer for years. When a stripper goes to halt Jim the bartender from shooting him… 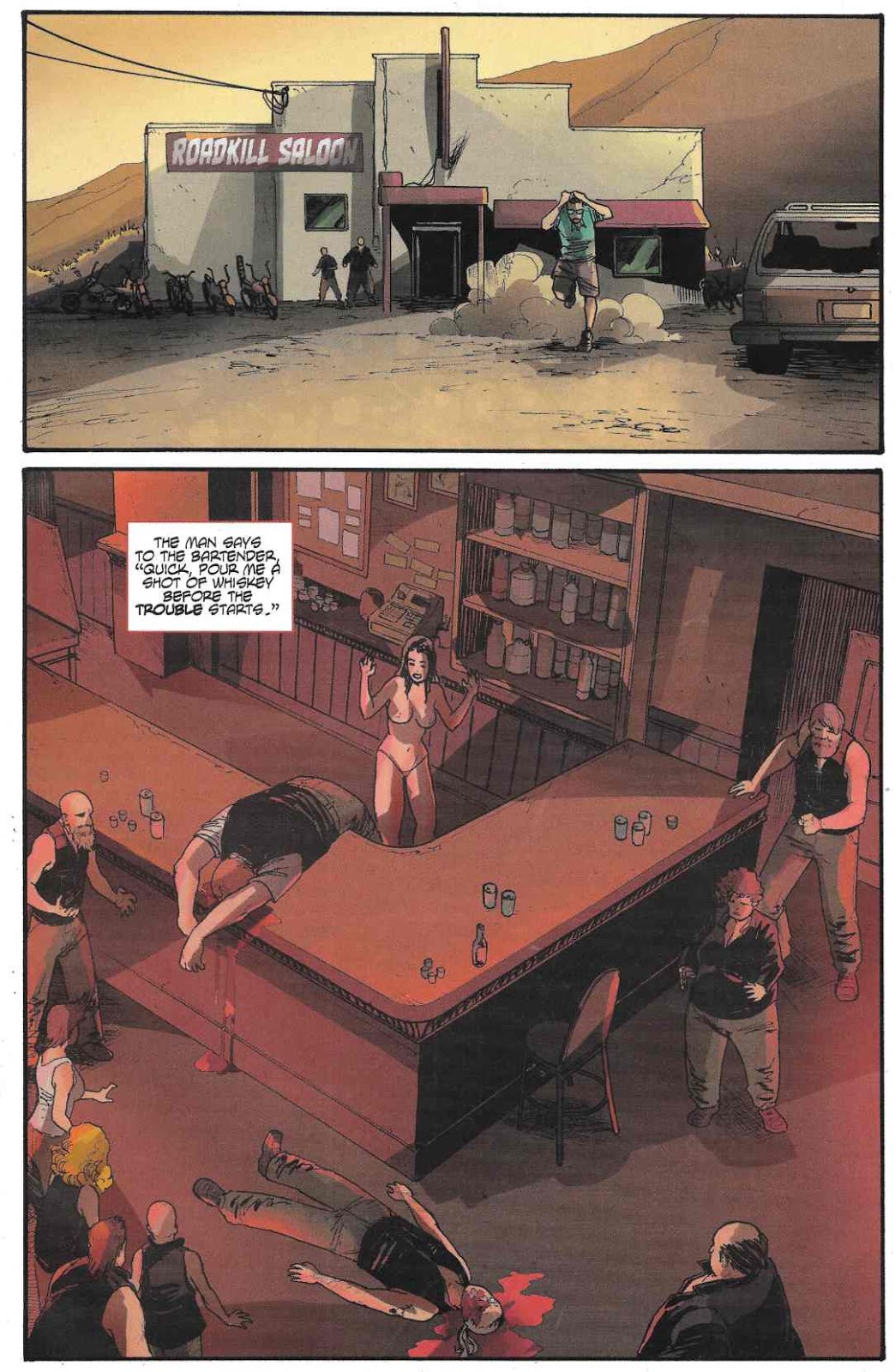 …Jim’s head explodes too. Just like the bar patron. The father runs out in the throes of madness.

Welcome to the universe Fisher has set up in The Great Divide. It’s a universe where a deadly plague has infected all humanity. Where the catchphrase of the day is “Separation is Survival.” Because IF you touch someone, ANYONE, there is a 50/50 chance you will end up dead. And if you don’t, the person you touch WILL! And you will be infested with their memories.

Wild, huh? Haven’t seen this one before.

The Great Divide was a six issue limited series designed by Fisher to have a complete story arc and to give something a little extra in each issue. In this one, comic readers were directed to http://tinyurl.com/TGD001 to pick up a doomsday prepper song based inside this universe. Each issue had some little online giveaway or gimmick to expand the universe Fisher was working to create.

In truth, the gimmicks weren’t the real draw here. Fisher came up with a really good story hook in this “world where people can’t touch” storyline and he uses it effectively in this issue. Critics agree with me, too and the series got very high reviews. Some of that could be due to Markiewicz’s art chores, which evoked the best images a brown and down future doomworld could have.

From our opening, we move the timeline forward a bit. Civilization has fallen and we come to our protagonist, who is a bit of a rogue and a thief. We can tell that because in his very first scene he steals something. 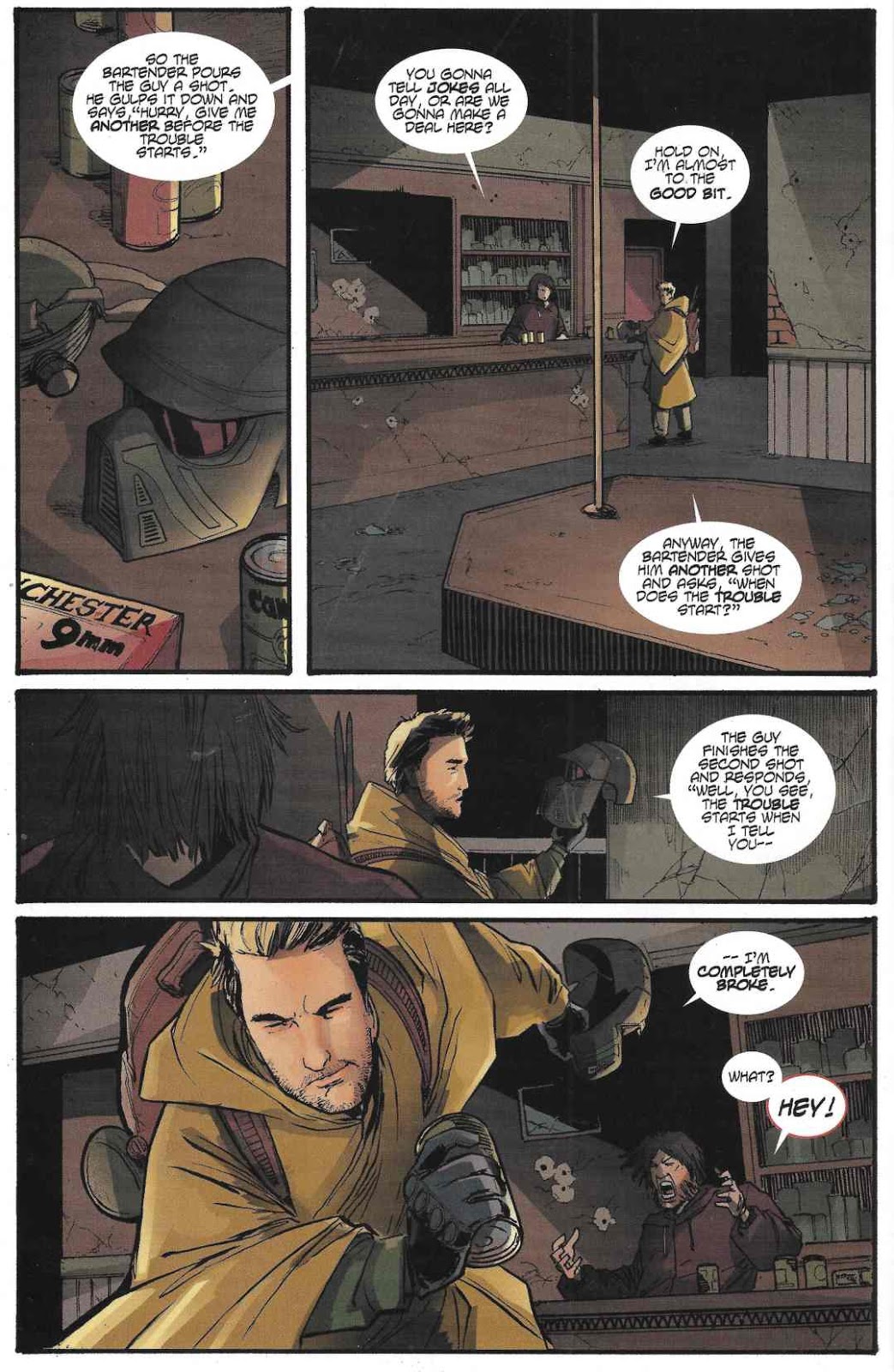 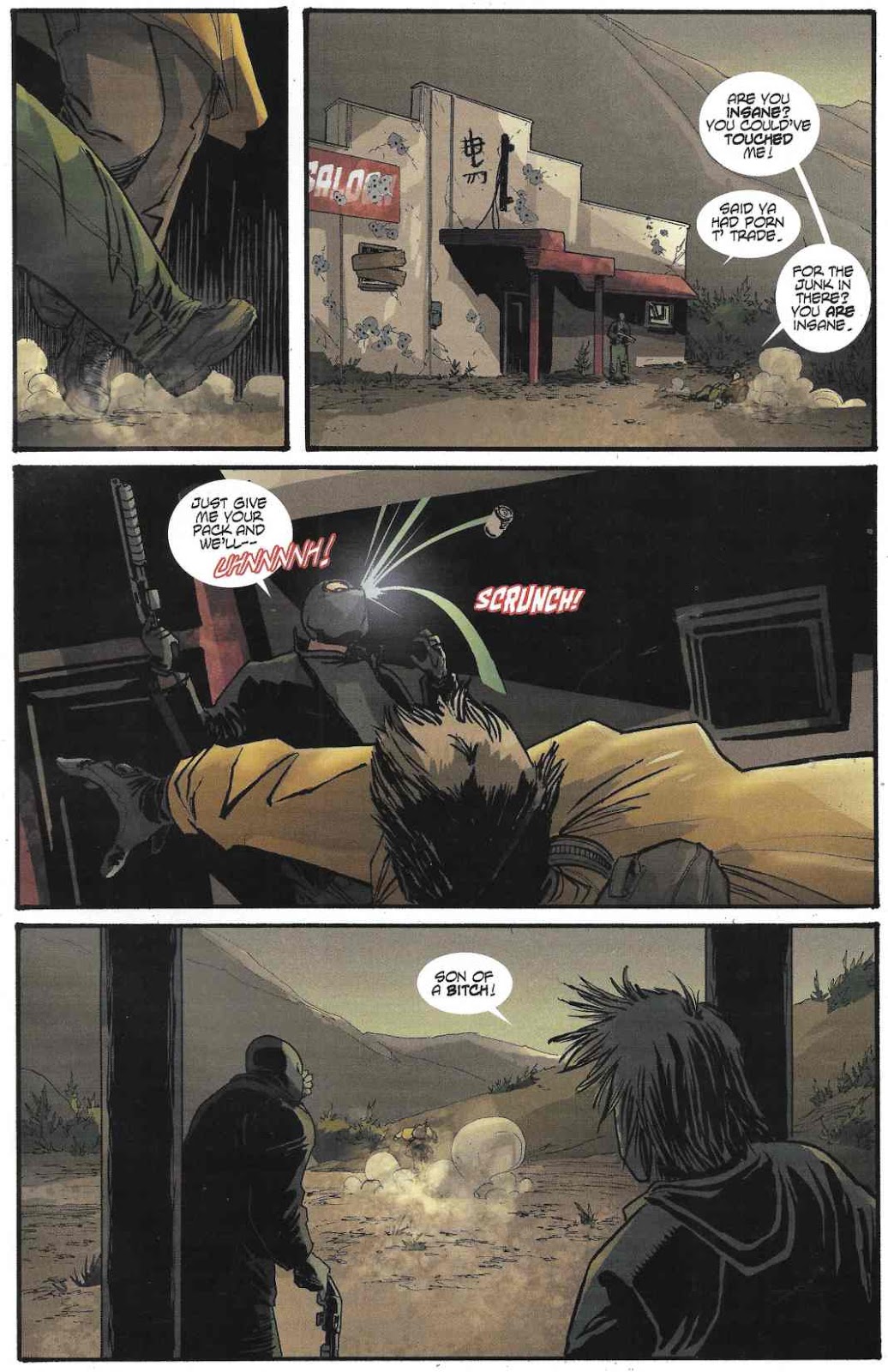 As he runs, we get a narrator crawl out of him, which intrigues me with how things could have gotten weirder. 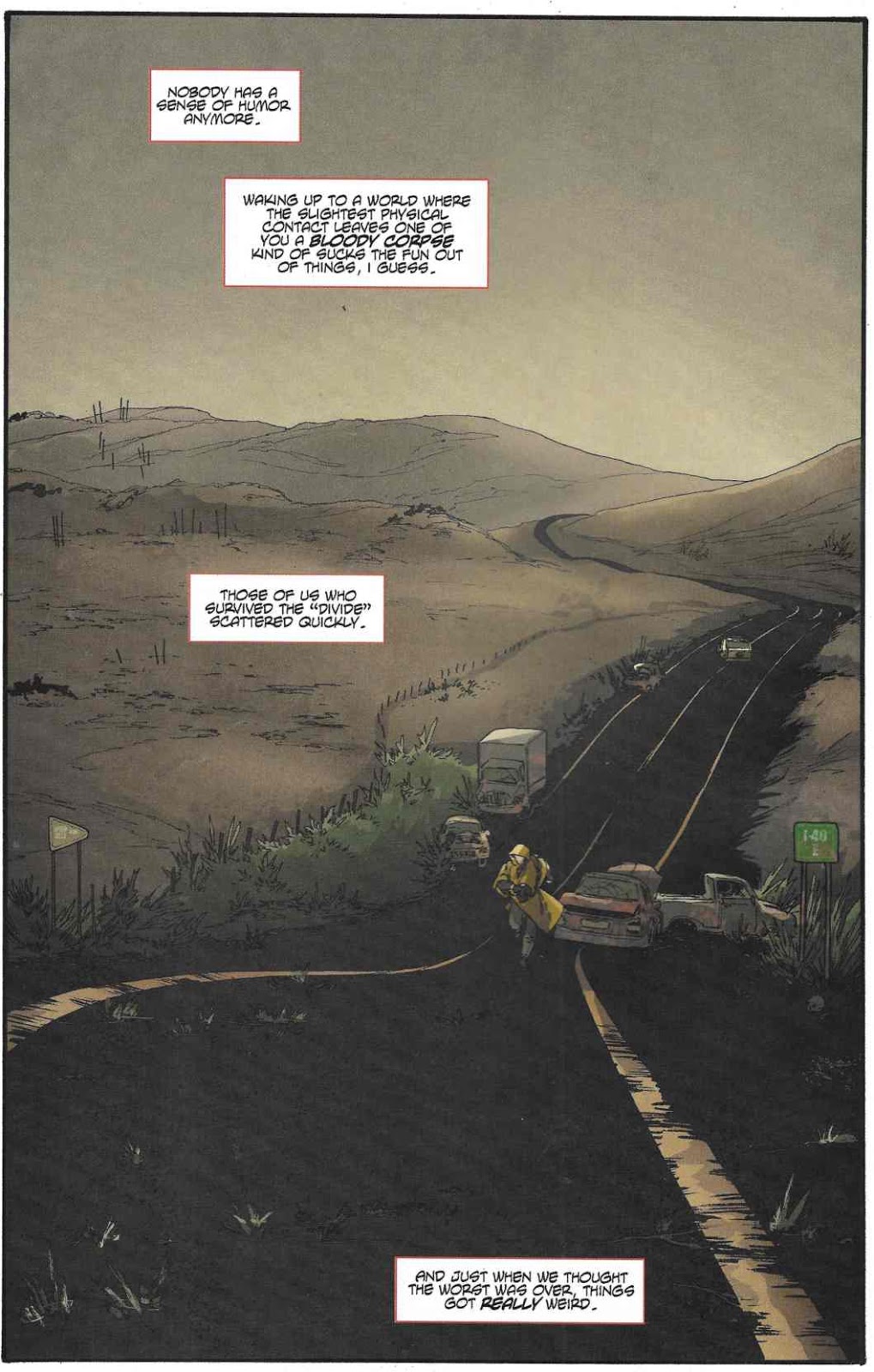 The unconscious migration one is kind of new, but should be an interesting wrinkle, as does the “hearing your victim’s voices”. 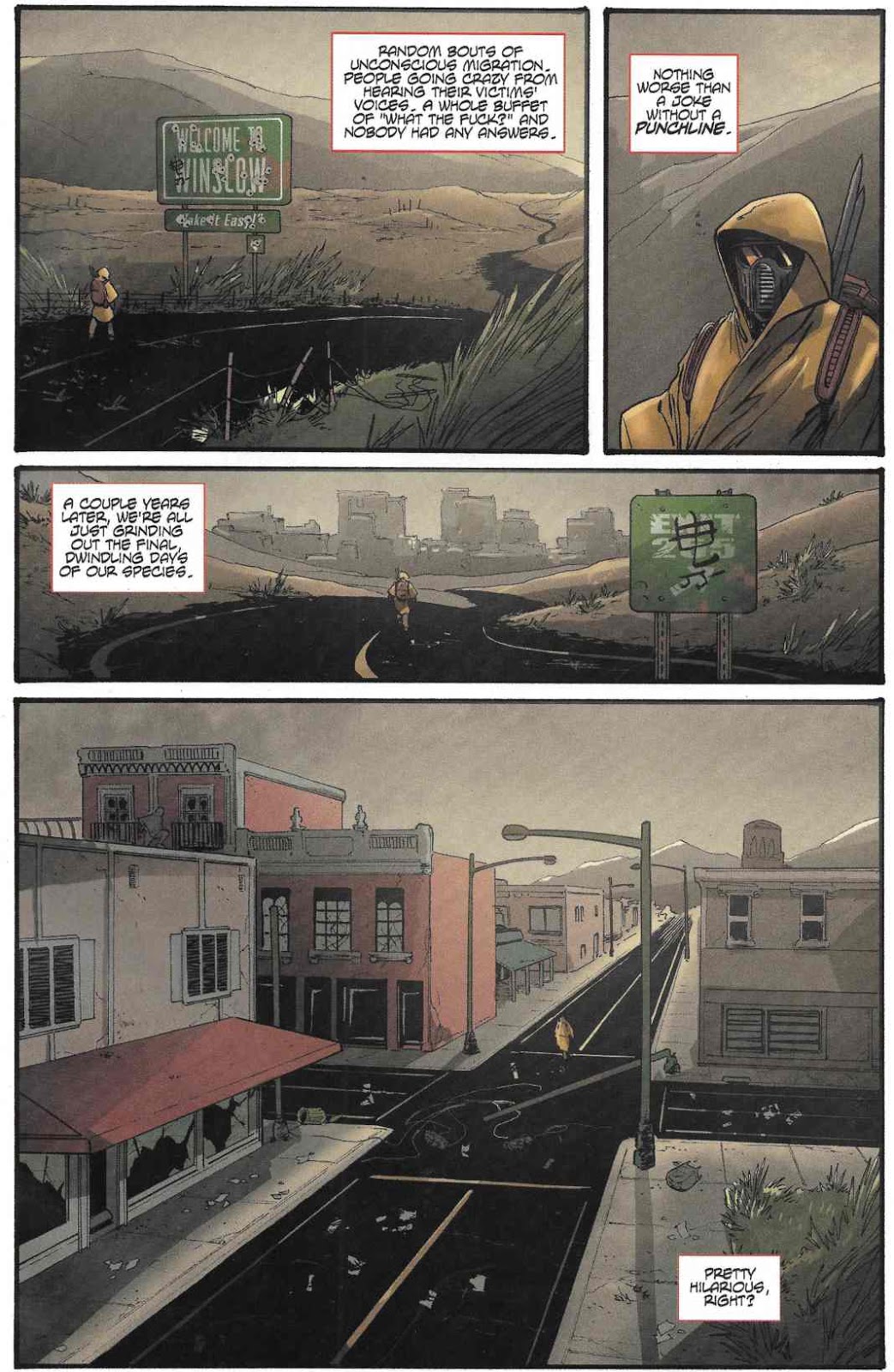 The problem with the apocalypse, however, is never knowing who you should trust. 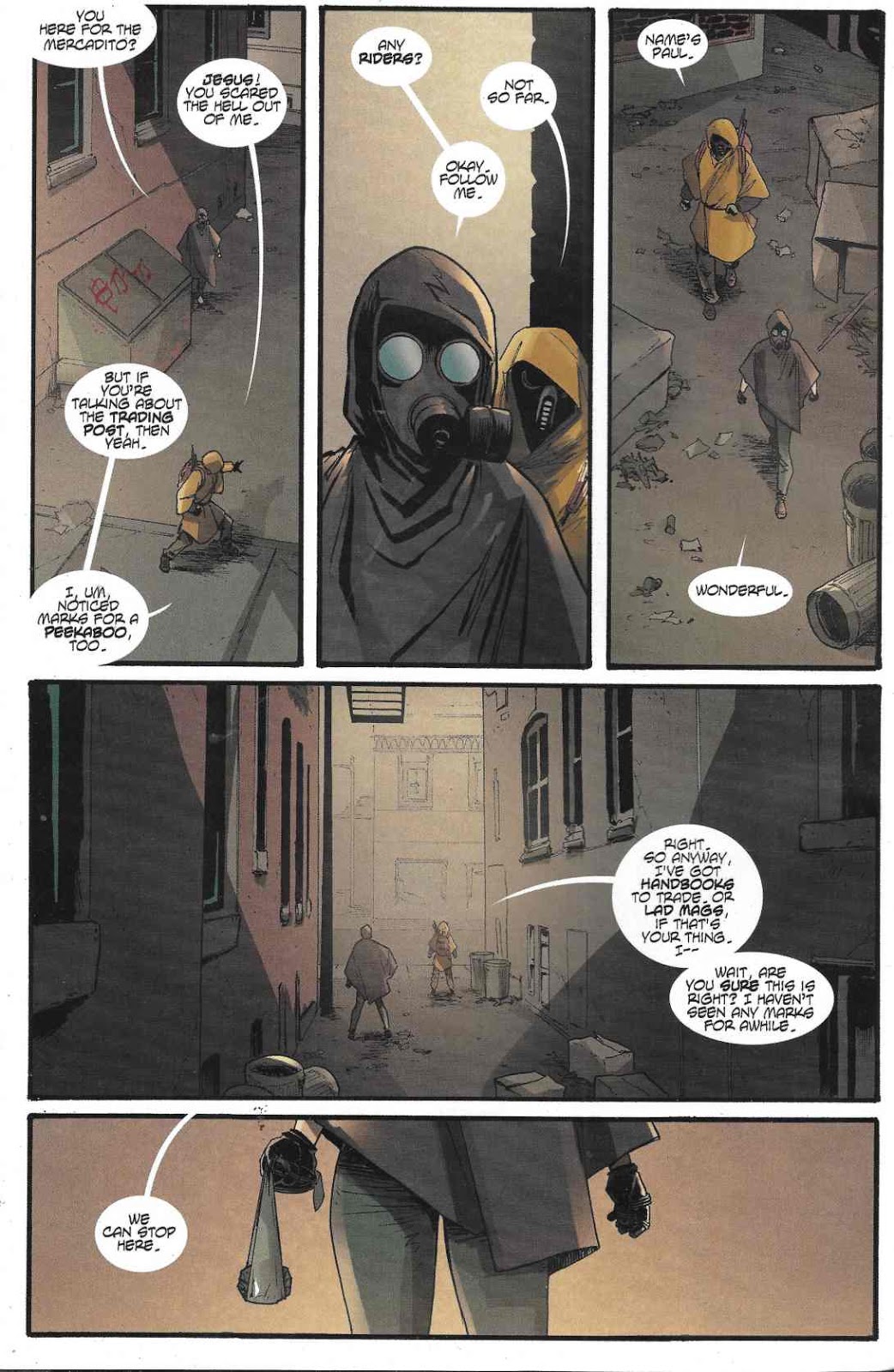 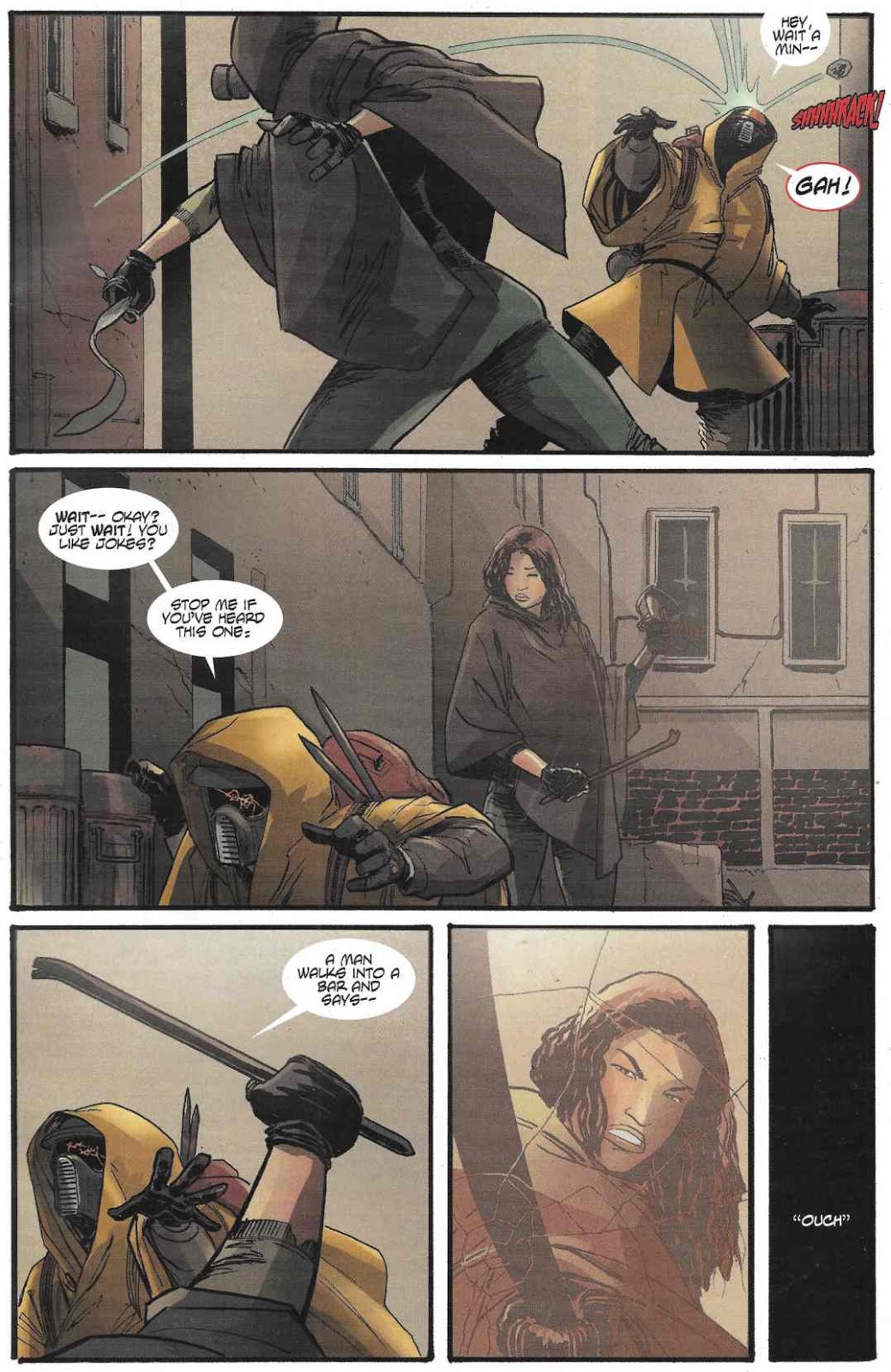 But it does lead to a good joke. “A man walks into a bar…” indeed! 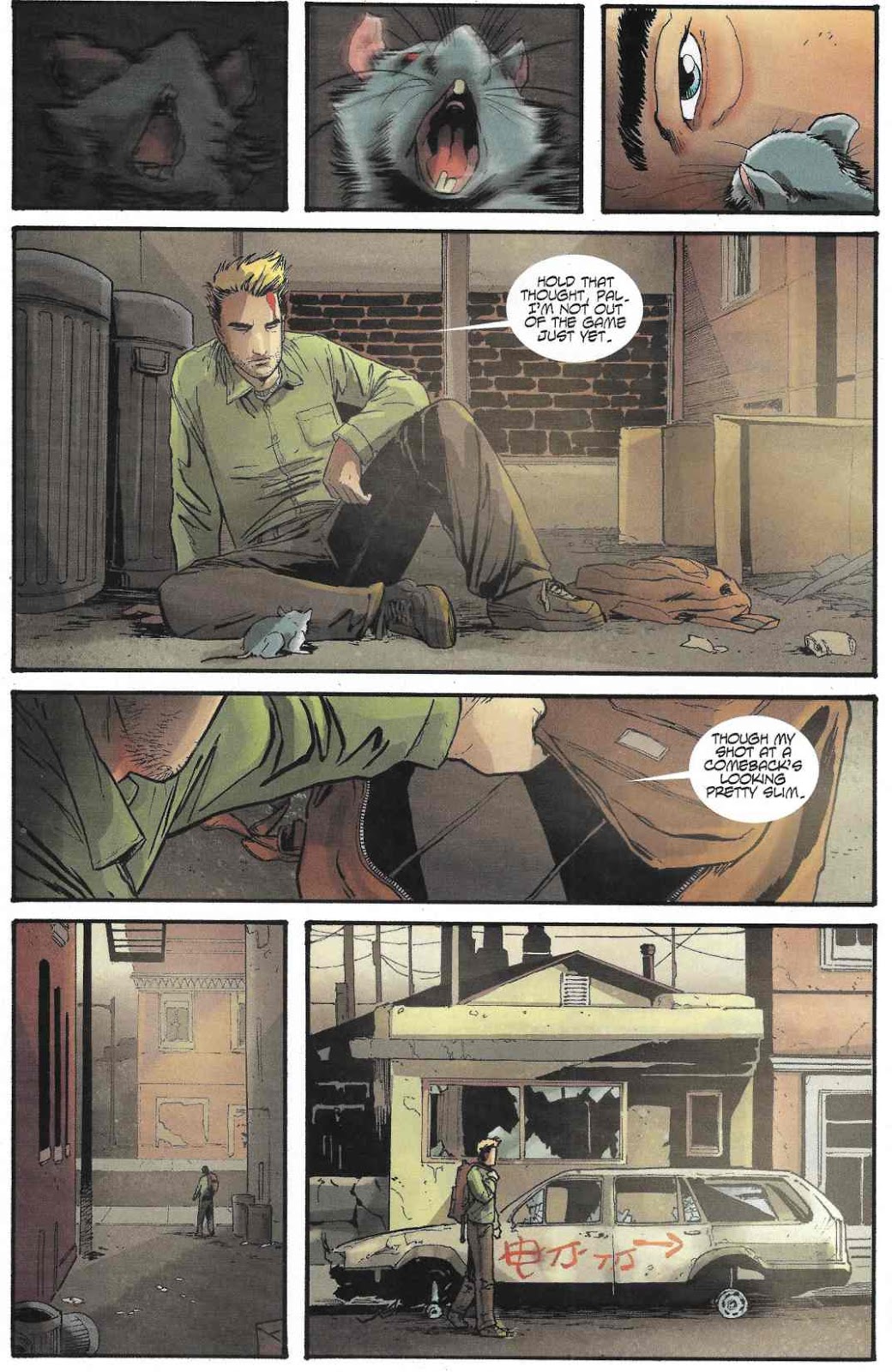 All this leaves our unnamed as yet, vagabond protagonist with little resources to keep himself alive. Yet he is still alive, so there is hope.

Even if it means mingling with the common folk who need companionship more than they fear deadly contact. I love that his internal monologue has an external element where he asks the info desk guy about crow’s nests. It helps solidify the thoughts with the activity going on in a way that is refreshing. Too often the “thought bubble” time feels like author exposition in these books, but this makes it feel very authentic. 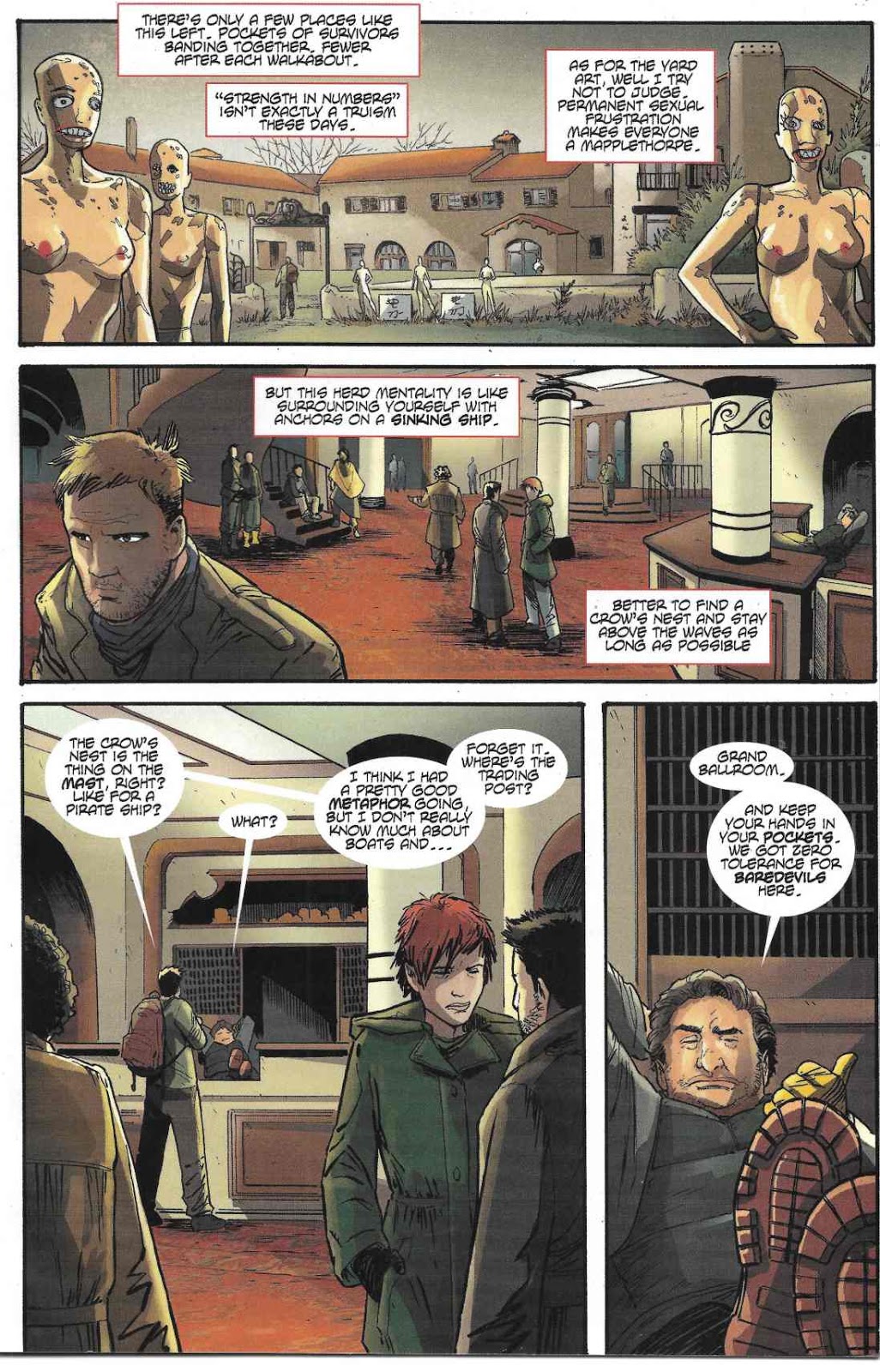 As our lead makes it to the bargaining table, he finds that the person doing the selling is the same woman who just stole his gear. She yells for assistance as soon as she realizes who just strolled in. 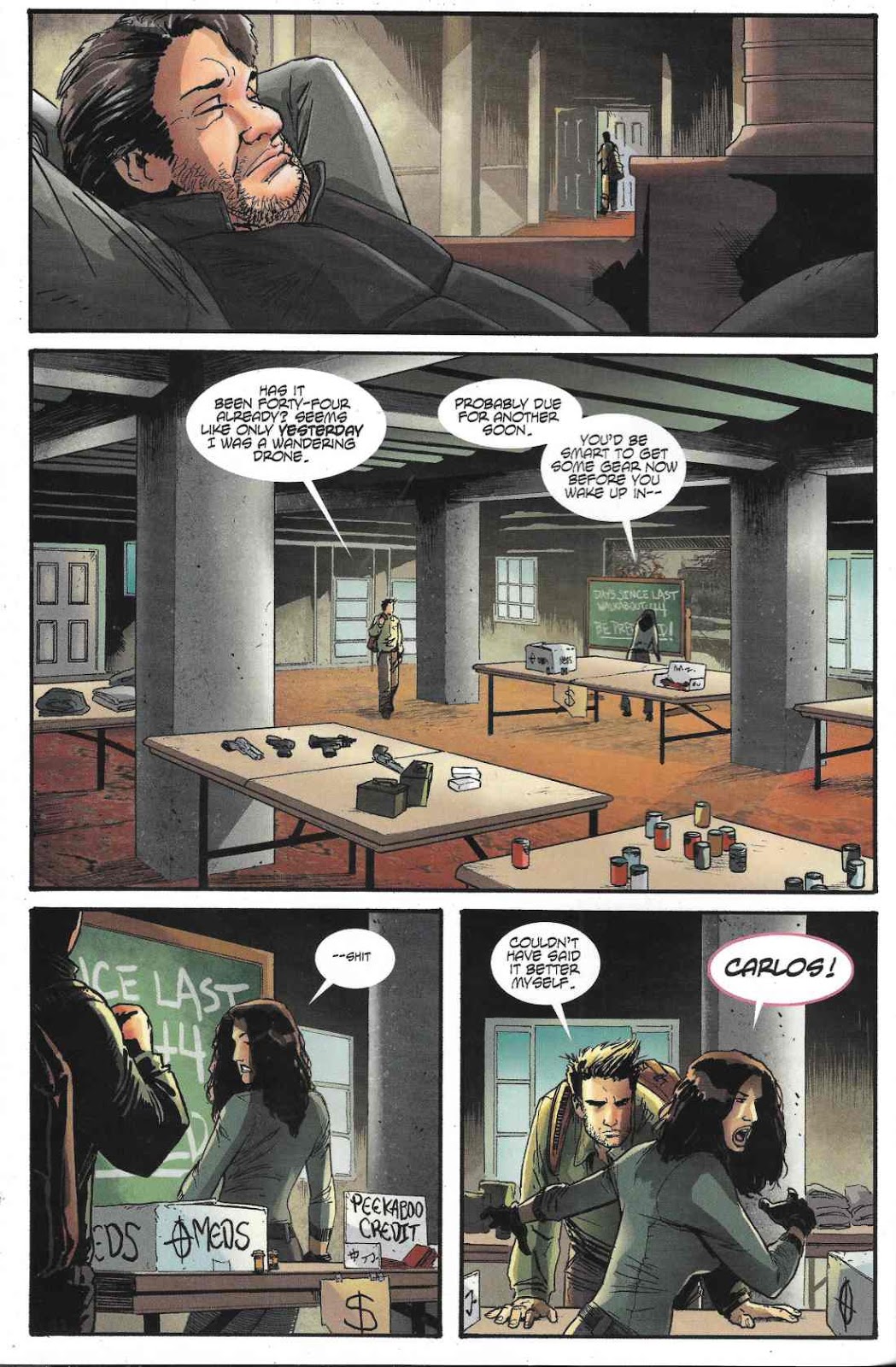 Not sure if Carlos’ arrival turns this back into a bartering type of situation or if it would have went that way anyway. Looks like his hidden loot is no good with these two, though. 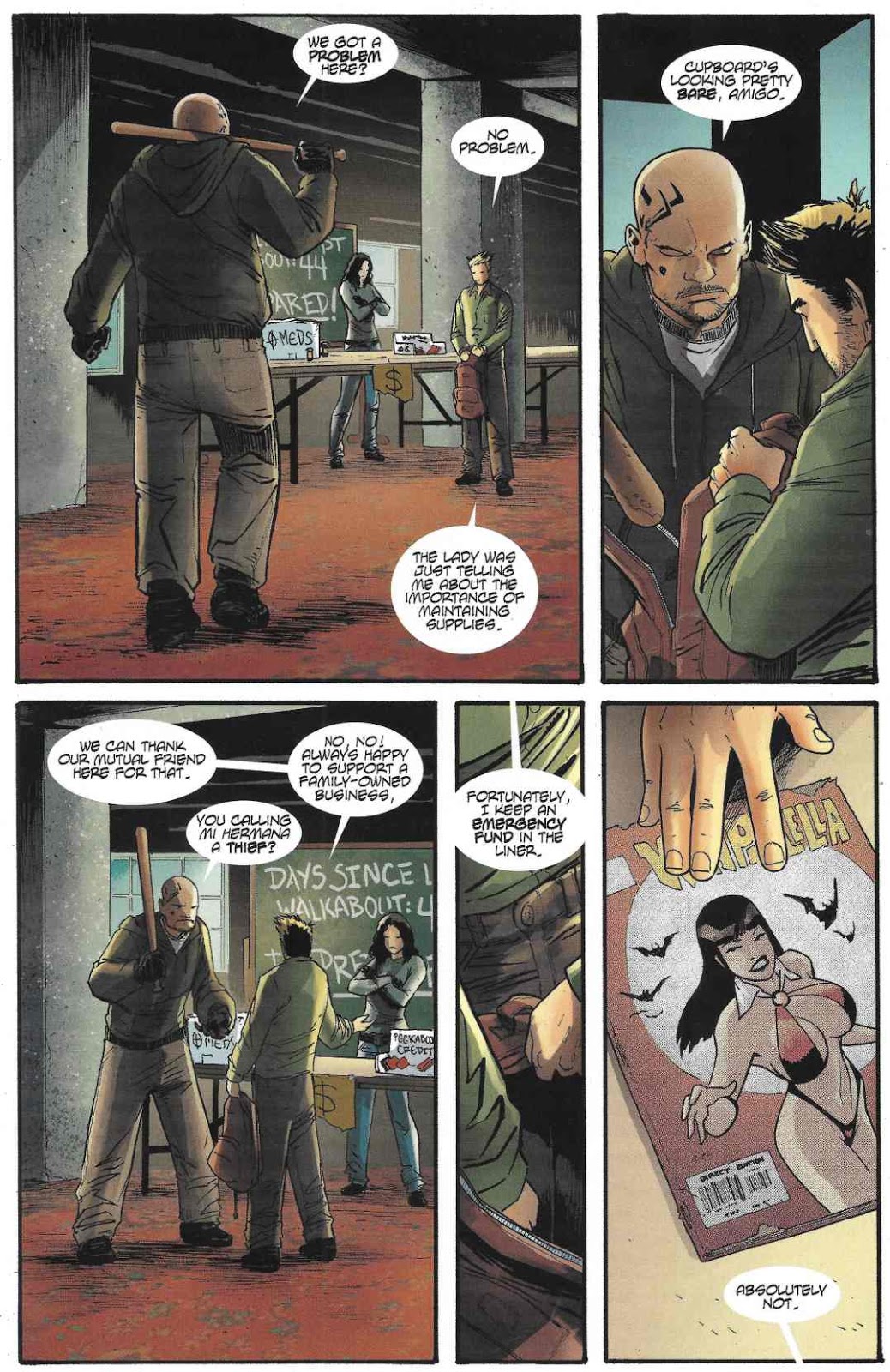 In the end, he is able to get back his gloves at least. 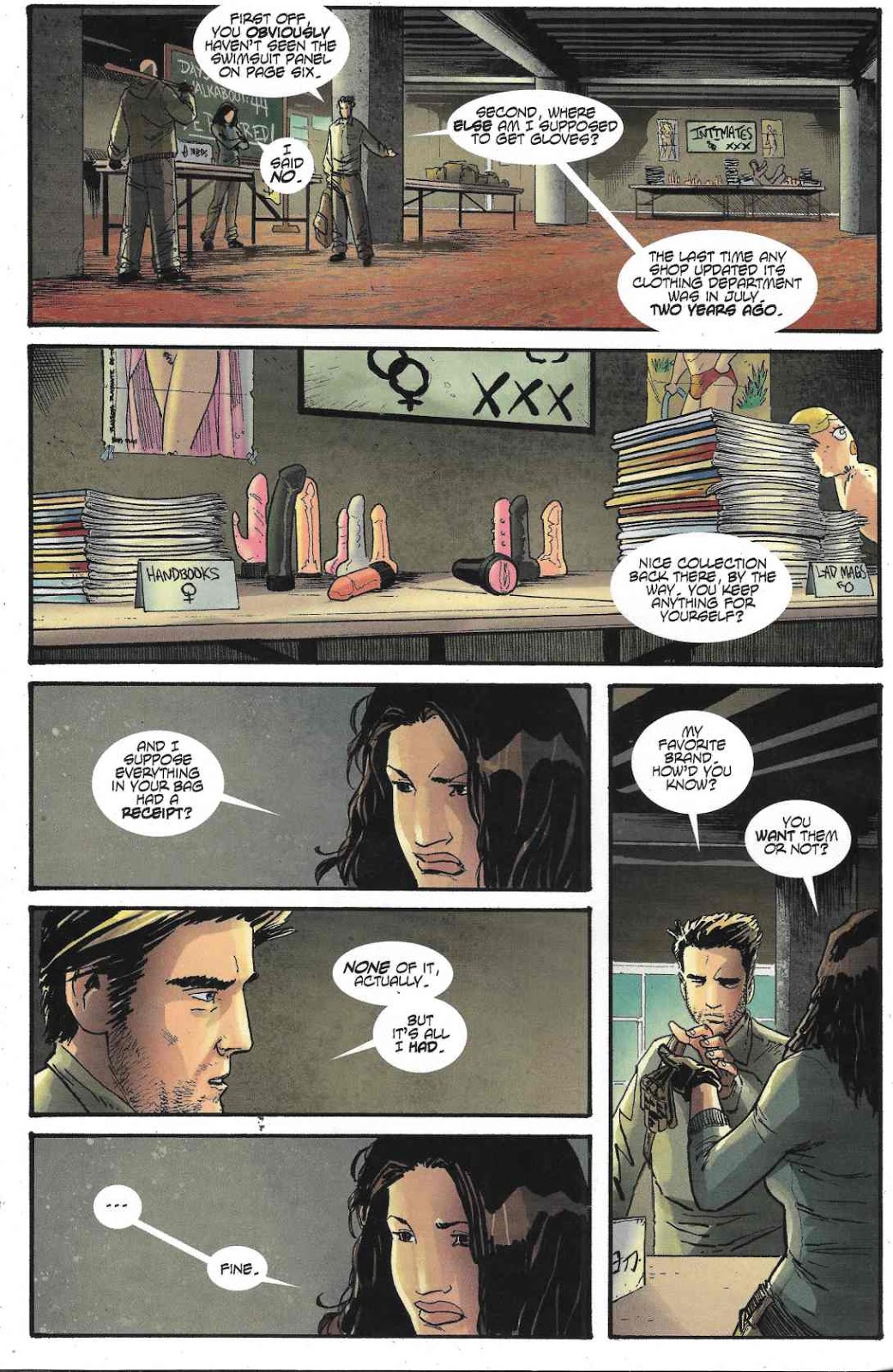 And even though he lends out handy information, it appears he has to lift a few Red Credits for the local nudey-bar. 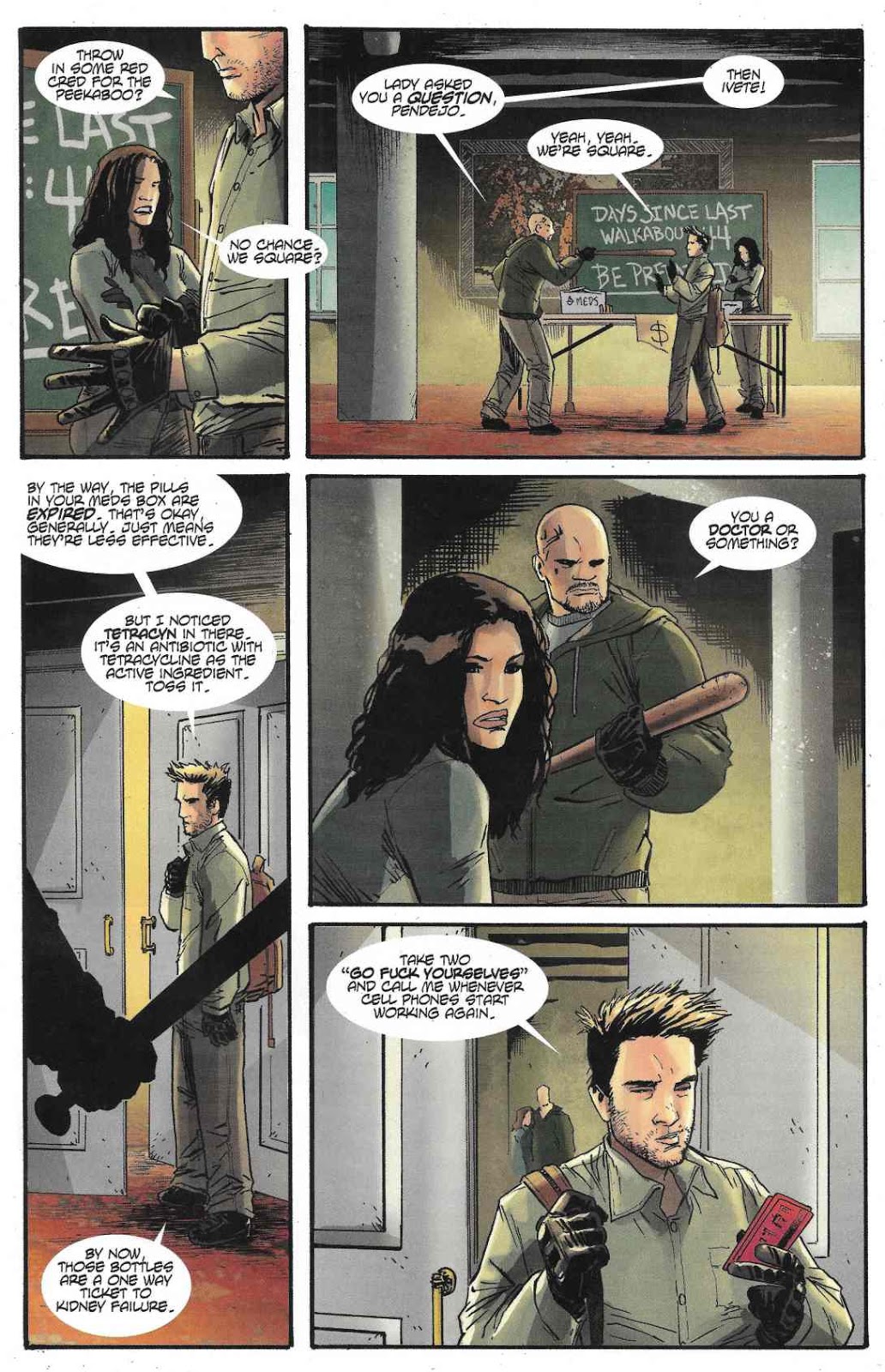 Fisher does a great job of showing how personal intimacy is now handled as well as giving us some more universe building. People who have touched others and hear their voices are called “Riders.” “Handsy” is a term for inappropriate touching…I mean it is now too, but without a lethal overtone to it. Little chilling, you ask me. 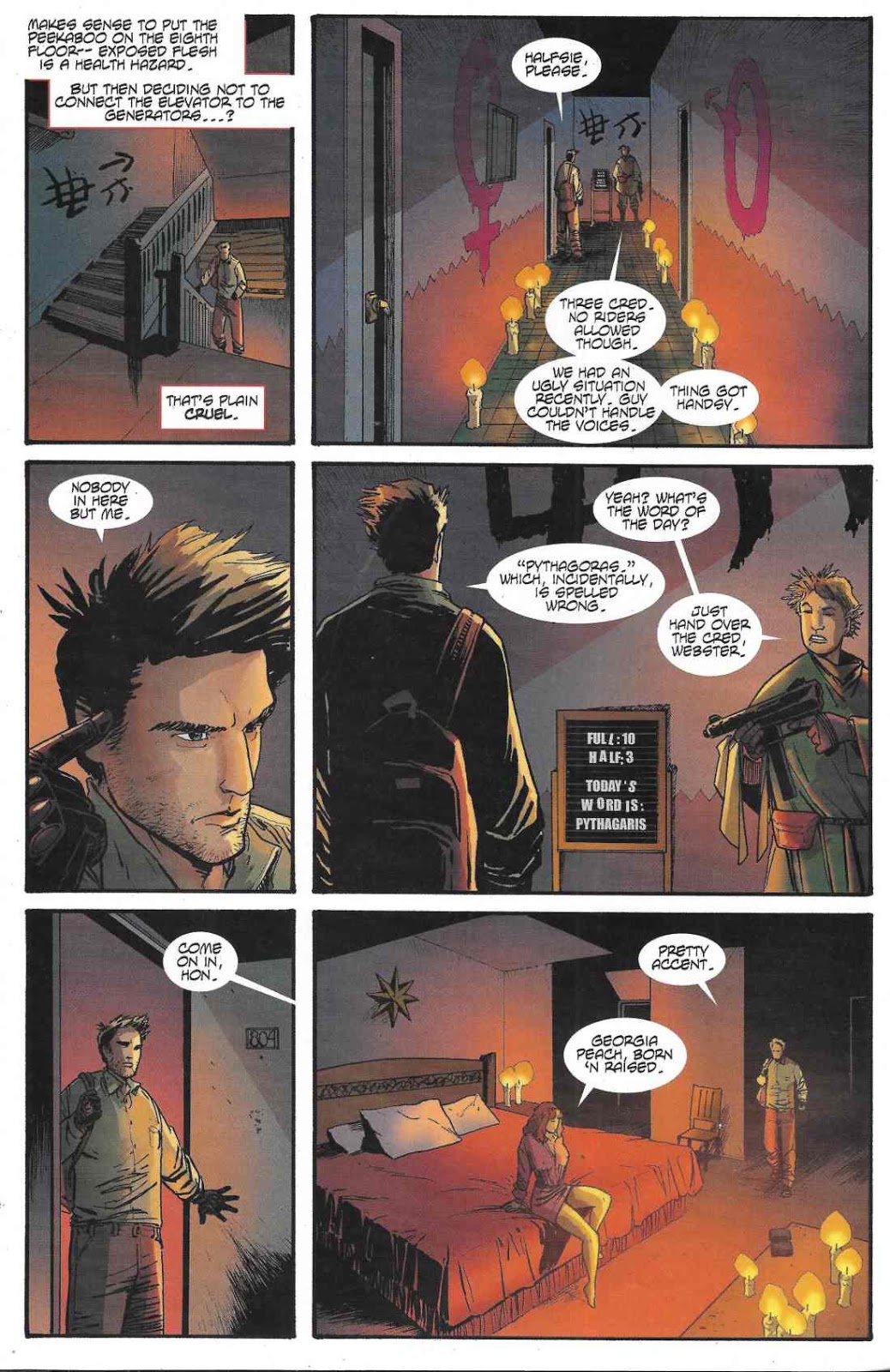 And the sex show is much more subdued. A true Peek-a-boo without any real touching feels a bit too sanitary, but given the rules of this universe, understandable. I’m glad this need is addressed in the book, because it makes total sense to use this to further world build. 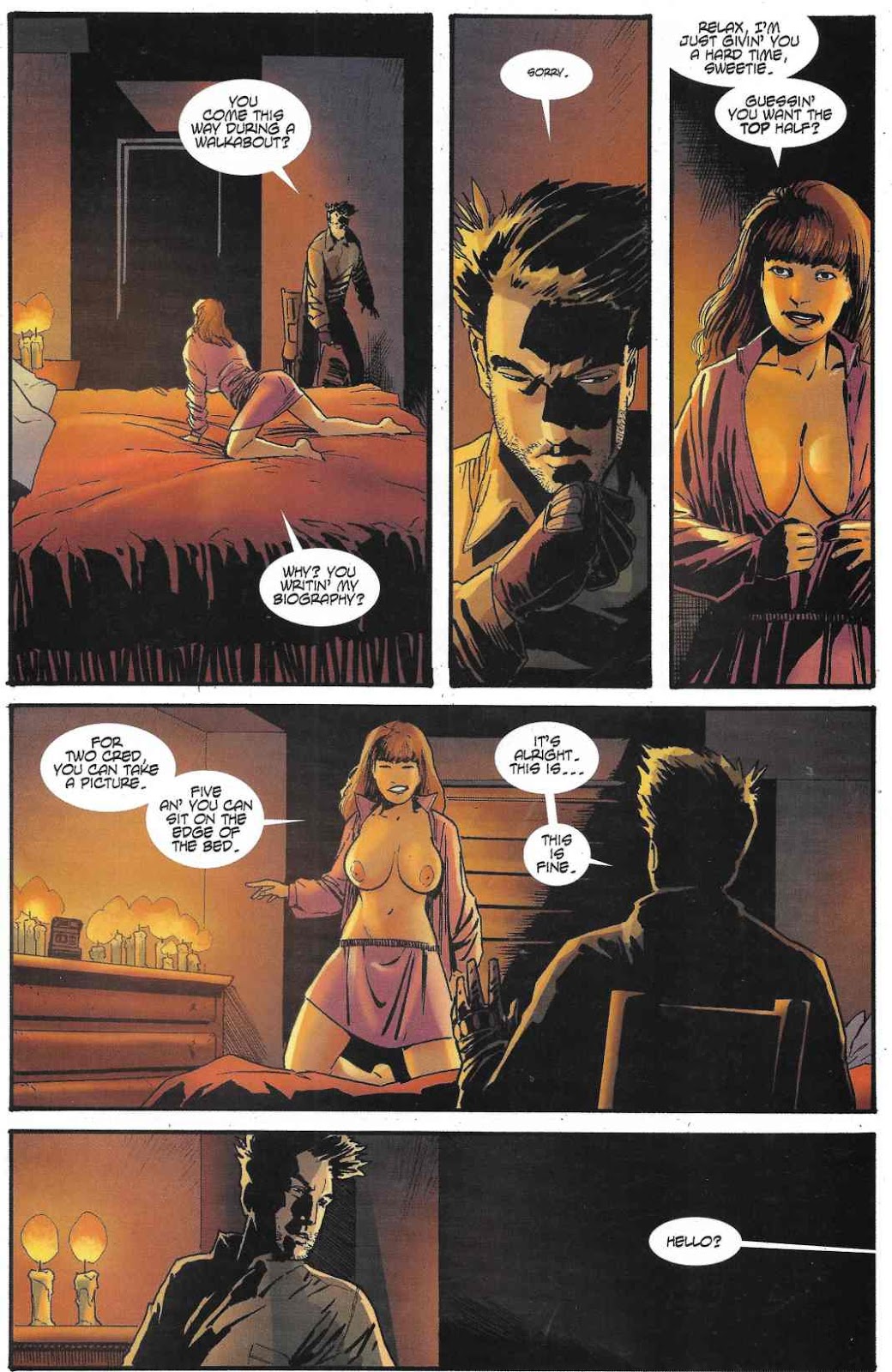 However, our friend gets pulled before he can finish…whatever it is he’s doing in there…by the woman who mugged him. She needs a doctor or anyone with first aid experience, and fast. She makes a deal that seems to highly favor our lead guy. 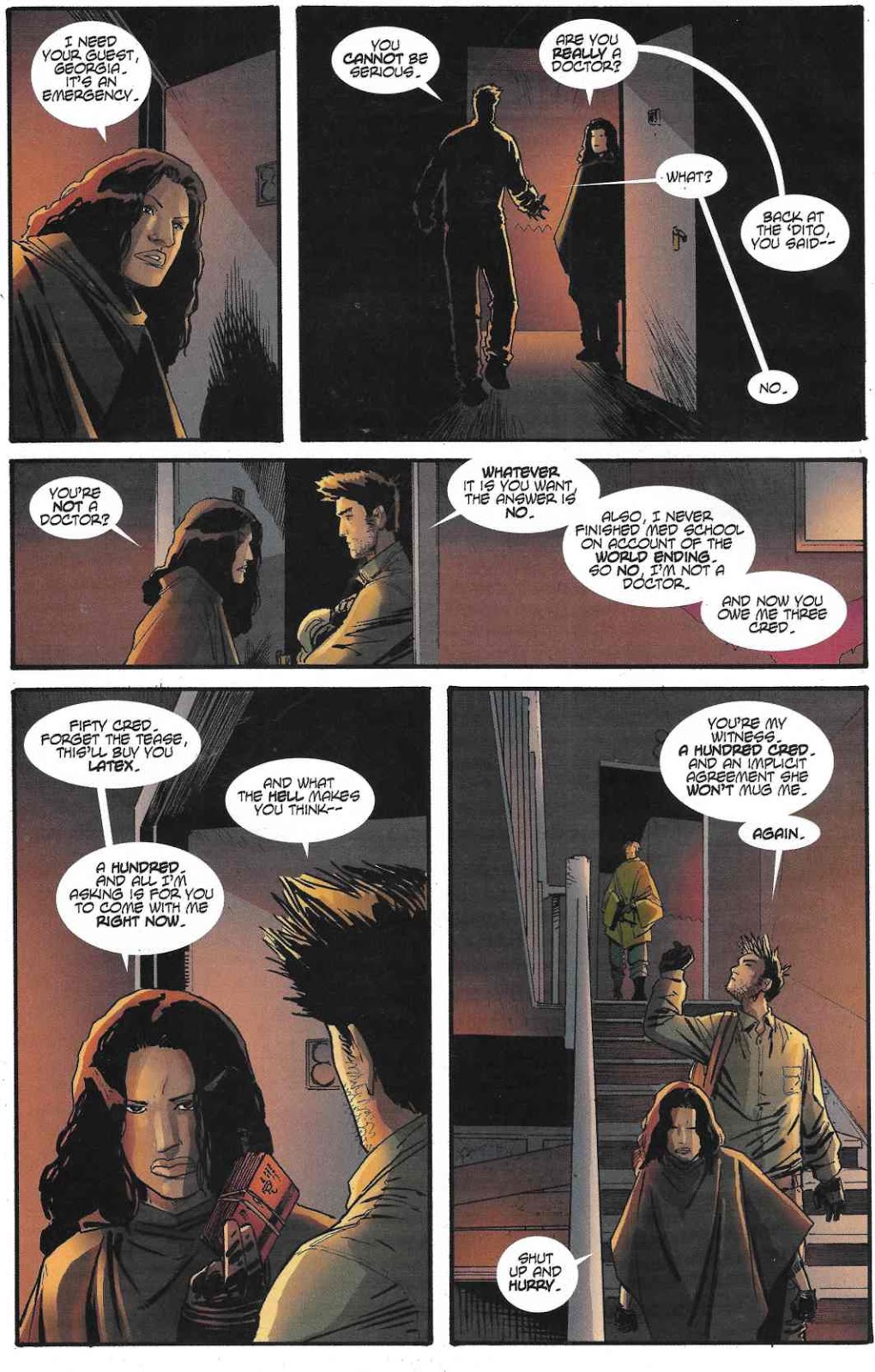 And we find that the one in need of medical attention is Carlos. This is Maria and she was going to do a smash ‘n grab on the camp’s fuel supply, but one of her informants got greedy. Now Carlos is hurt and she needs him patched up fast so they can make their getaway. Our lead only helps when reminded that “there are no good guys left.” 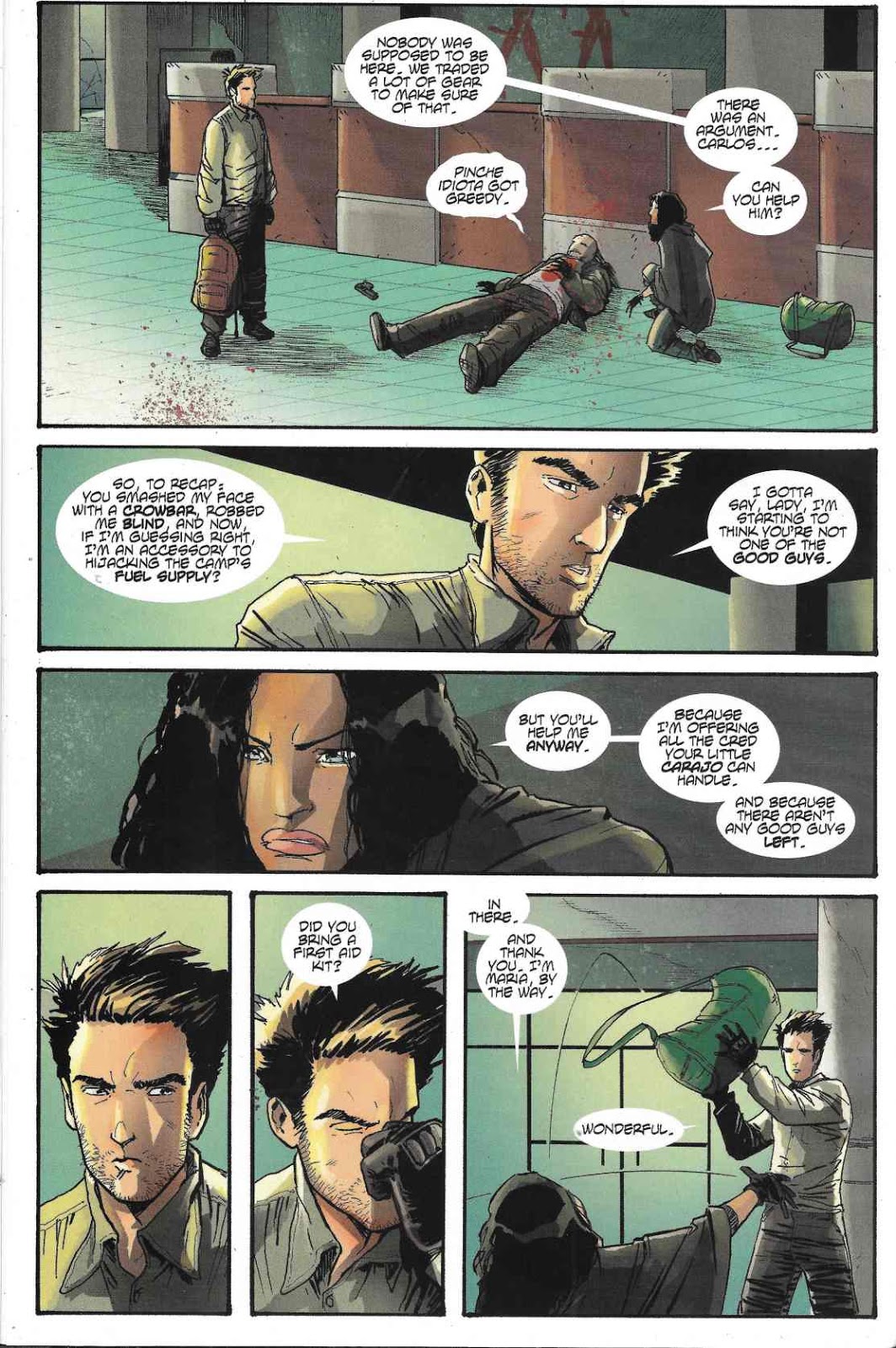 He is stonewalled at why they needed the gas, and Carlos doesn’t look too good… 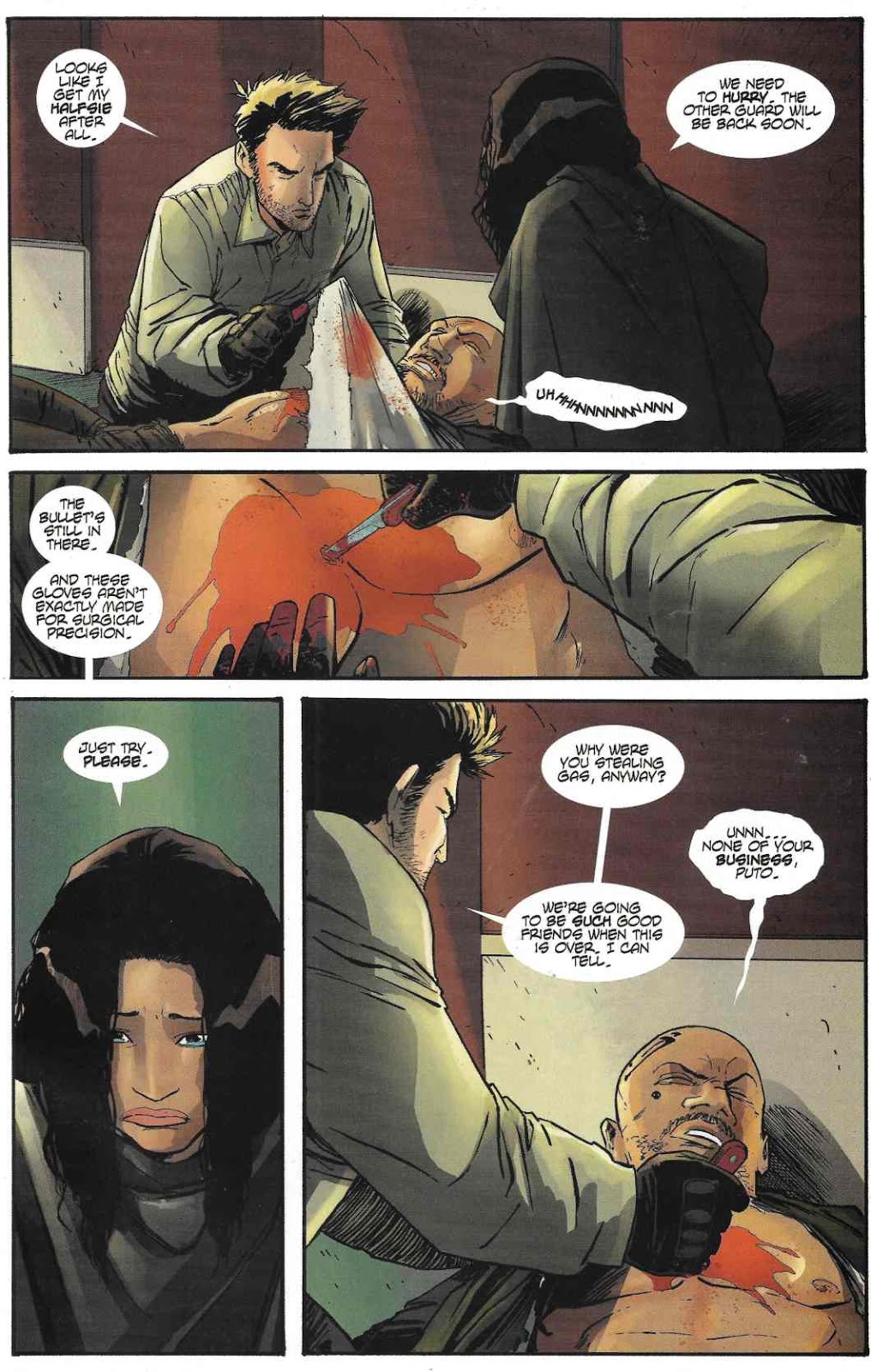 …when the turncoat makes an appearance by shooting our lead in the shoulder causing everything to go pear-shaped. He falls on Carlos and absorbs his personality…while also causing Carlos to die a horrible death. 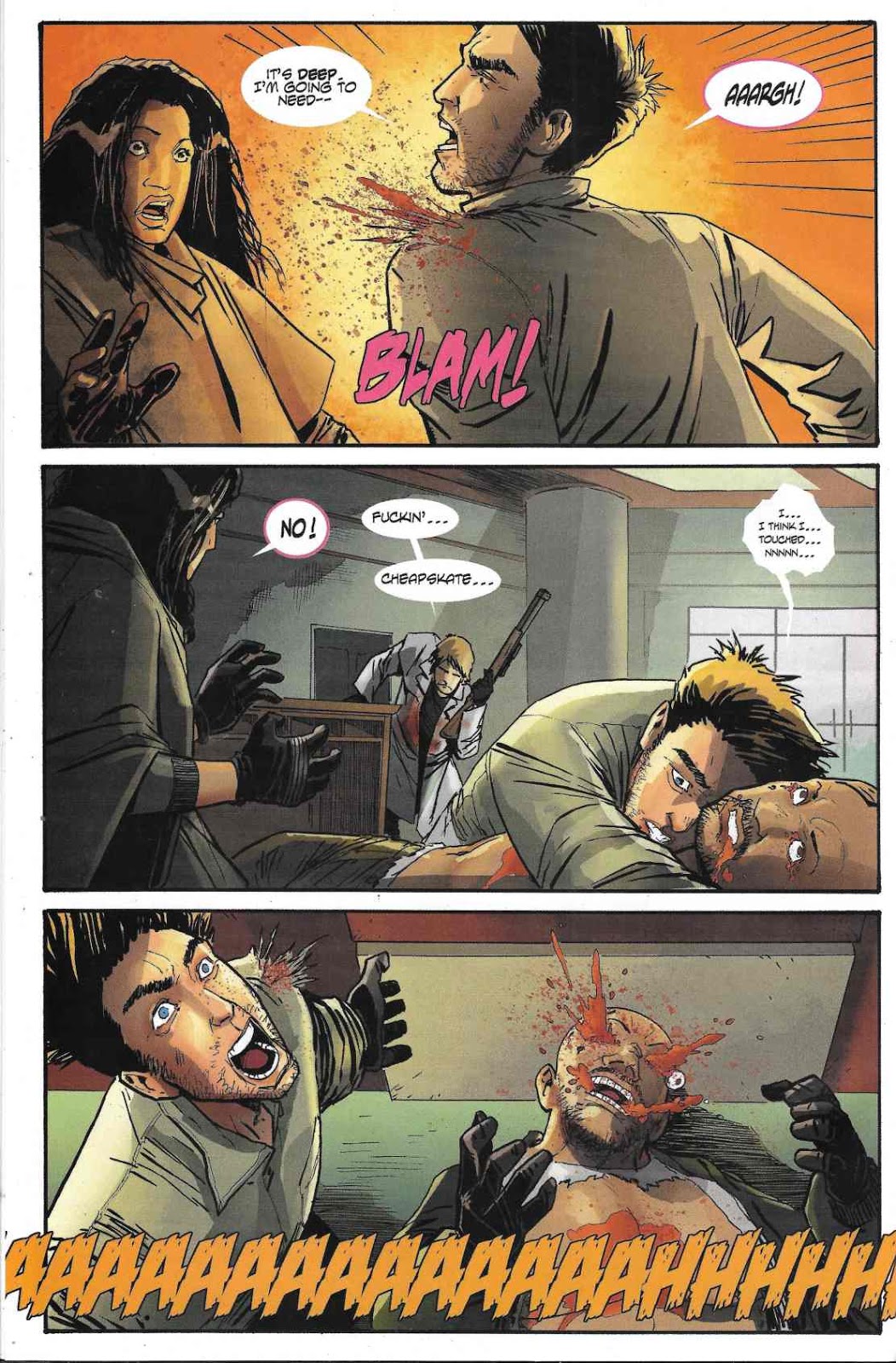 However, Carlos’s overriding thoughts of protecting Maria kick in and our protagonist-with-Carlos-rider offs the guy who holed his shoulder. Only then do we get someone off panel calling his name… 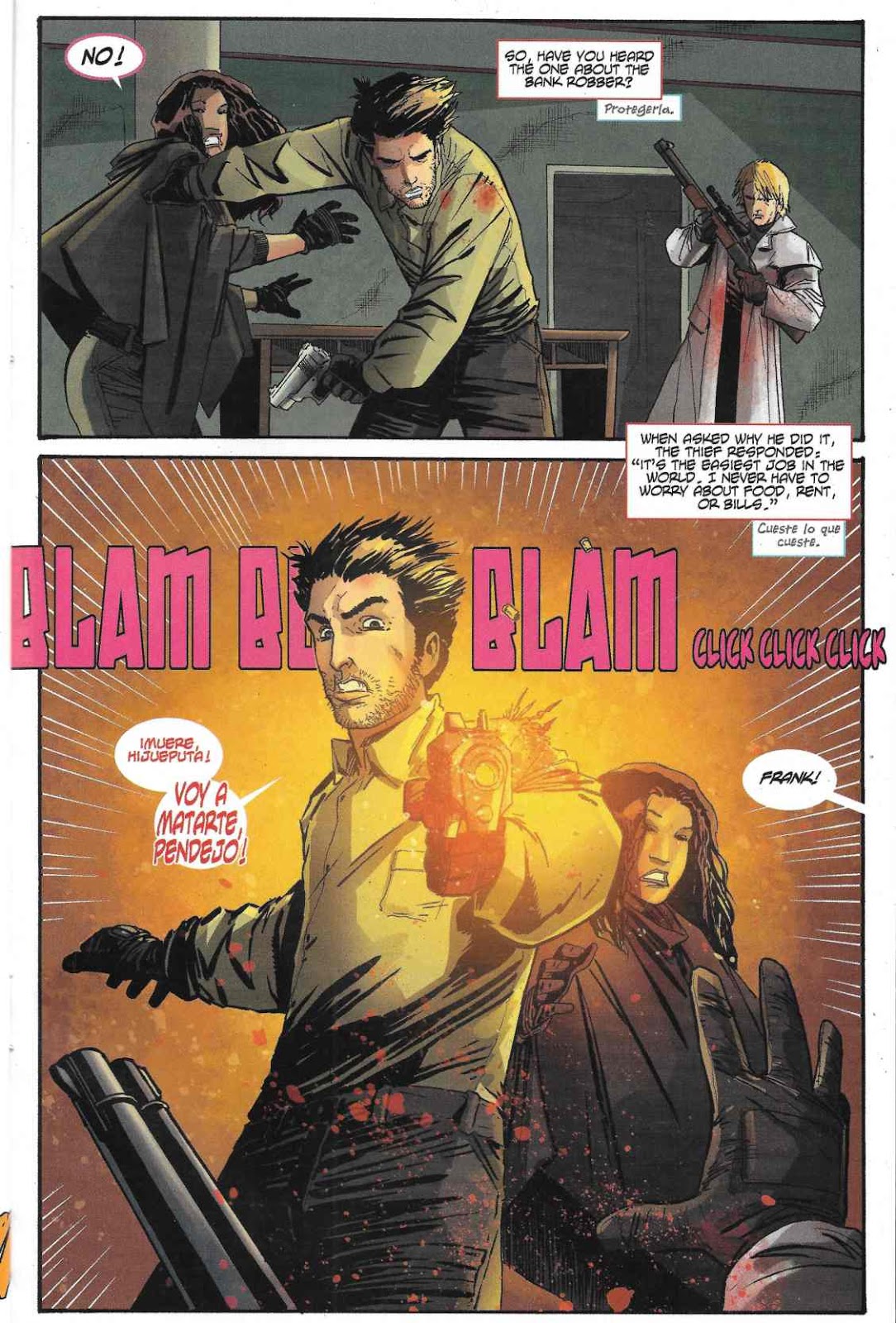 But who this new arrival is will get to wait for next issue, because our time has run out. 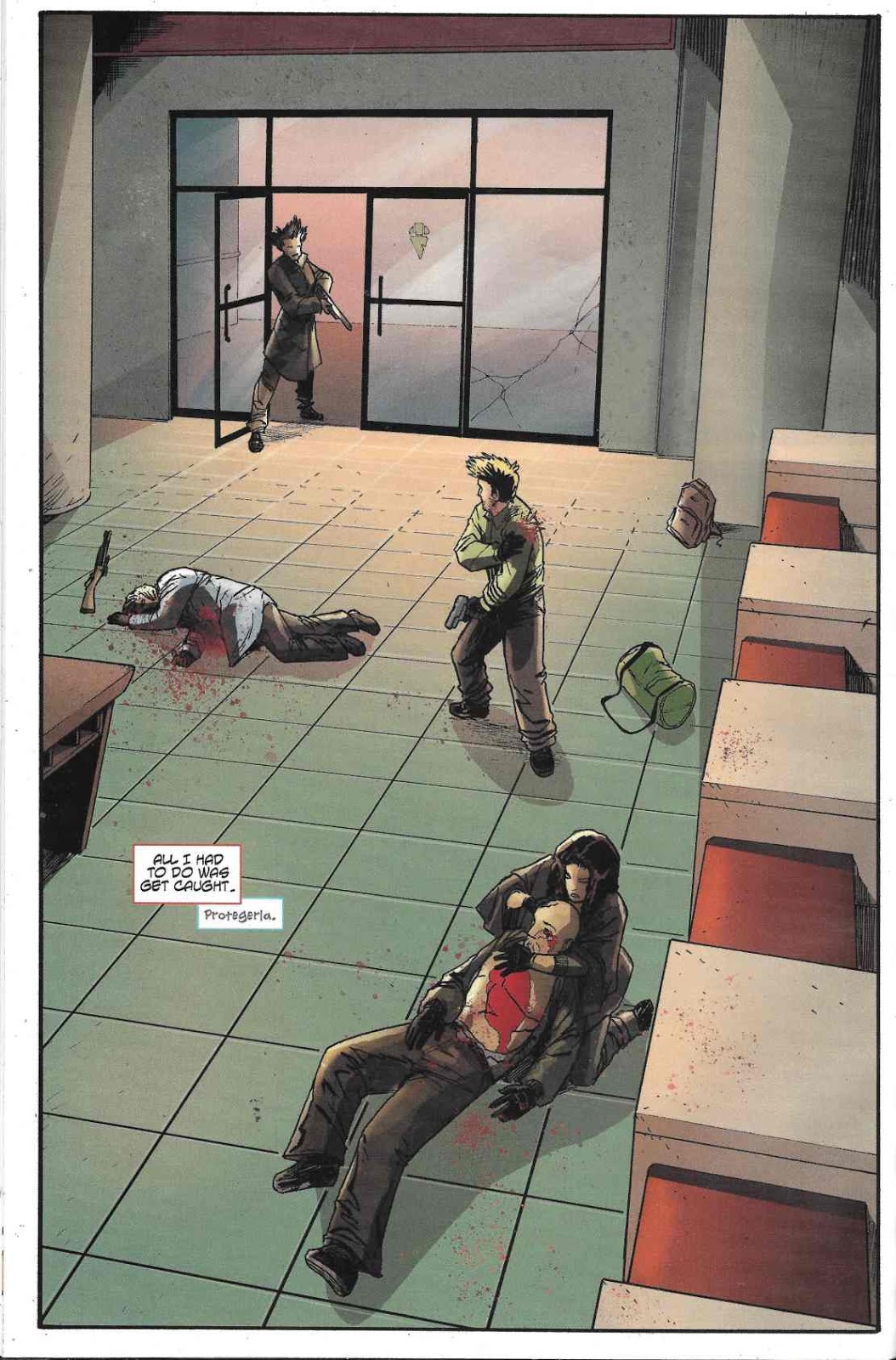 Fairly inventive and like the characters a bunch. This first issue delivers, and the series has a lot of fans. Might be something you should check out in trade or if you see a few issues in a bin, invest a bit. Oh, and here’s some back page extra content that is kind of a hoot. It explains why the test for a rider is to read a hard word (riders all have dyslexia). Love these bits of world-building and think you will too. 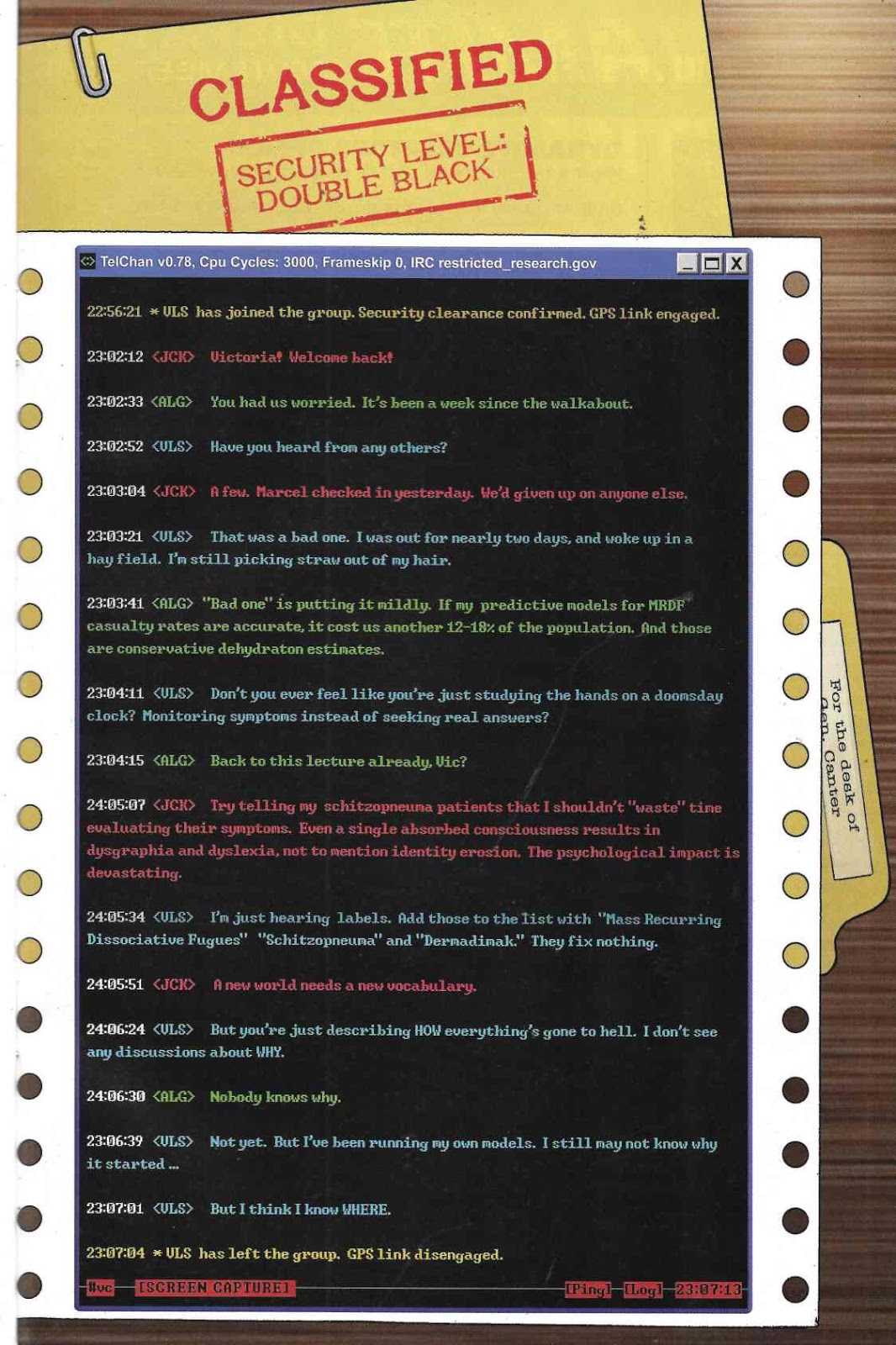 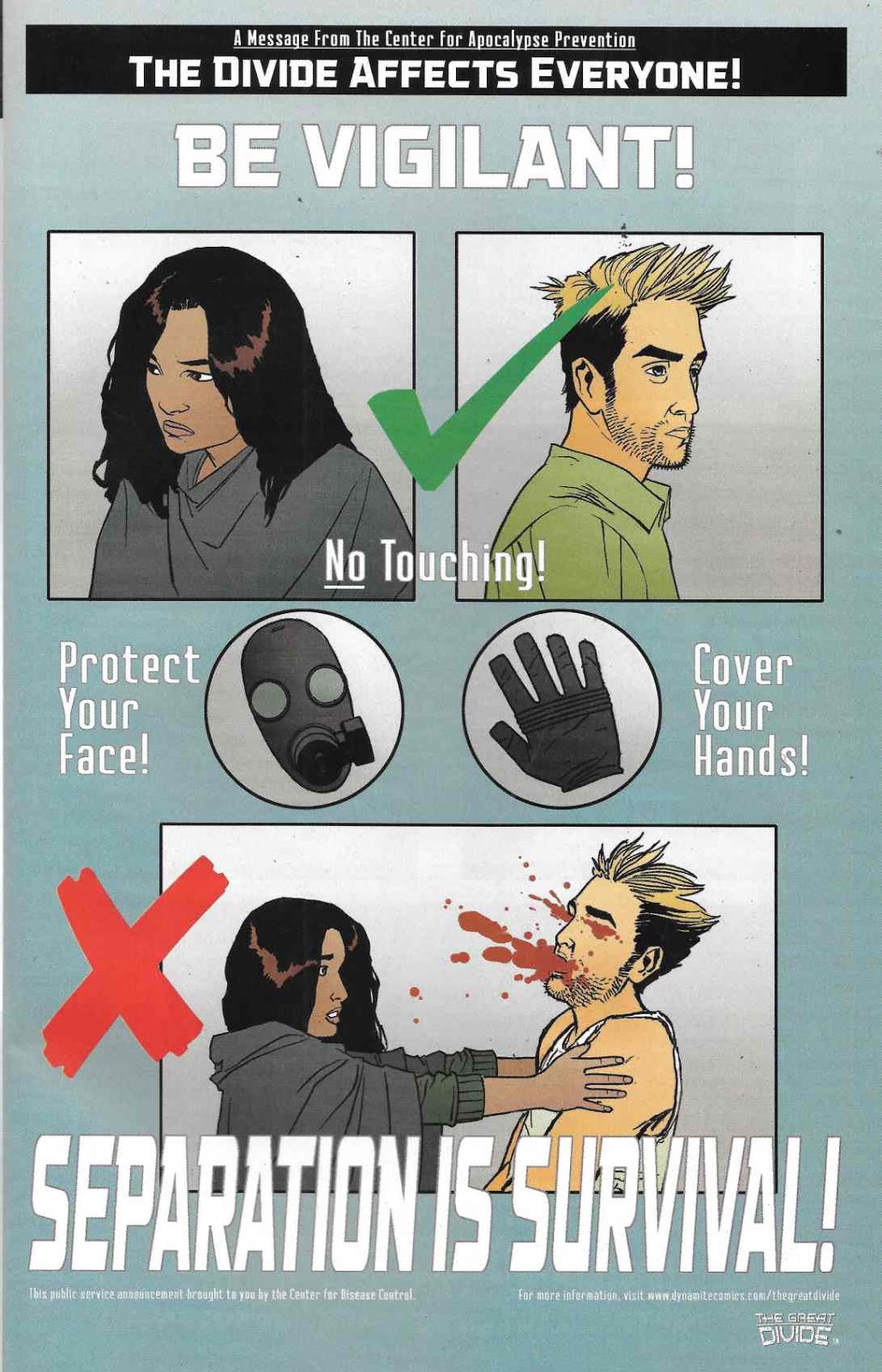 Posted by SonOfCthulhu at 6:11 PM