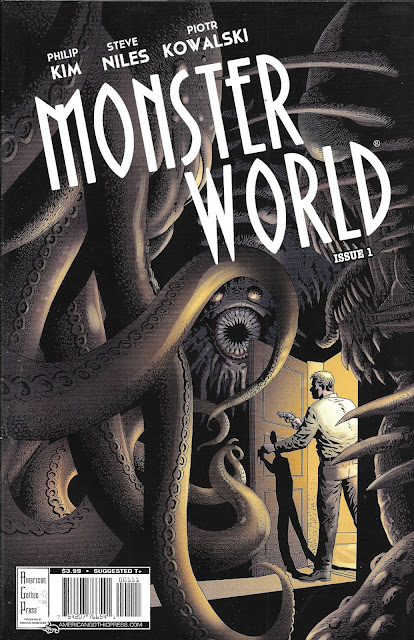 So, let’s talk about Steve Niles.

If you are any kind of fan of comic book horror from the 2000’s and up, you’re going to encounter bunches of horror comics with Niles listed as author or co-author. And that’s a good thing.

Steve is best known as the author of the script for 30 Days of Night, the vampires-in-Alaska comic that spawned a movie and then like a million sequels. And while that was his big break, Niles was active in the comics industry for some time before then. Most of those projects were horror related and have found their way into the Crapbox. You might even term him the unsung hero of my October Horror post-a-day, his name comes up so frequently.

In an effort to correct that, this is me sunging him…er, I mean singing him?...whatever – giving him the props he deserves. (need more coffee!)

It’s always hard to discern what a collaborator brings to a property, but I can state that when I see Nile’s name on a book I generally stop worrying about if the story will be good. Possibly this is due to him creating one of my all-time favorite pre-New 52 DC characters that no one loves: Simon Dark. That book got massive love from me, for everything from the art to the story. It was an Edward Sissorhands becomes vigilante tale that SHOULD have taken the world by storm and been a forever ongoing. As it is, it is just 18 scant issues that tell a REALLY good atmospheric story.

In summation, I don’t know WHAT exactly Niles brings to the table, but I know that no matter WHO he is working with, from Rob Zombie to actor Tomas Jane or Tool guitarist Adam Jones or any other writers, that the result will most likely be a great story that I will genuinely enjoy. He attracts talented art folks, too. Either that or he knows how to get attached to projects that celebrate great artists. Whatever it is, there is a certain part of me that breathes a sigh of relief when digging through a bin and I pull up an unknown horror title with Niles name mentioned. Because I know that title will be one I enjoy reviewing.

And speaking of reviewing, I have one to start here. This book called Monster World is an old time detective noir with an added dash of classic movie monster madness. I loved this as a kick-off for a series and wished my dives had uncovered more of the book’s arc. Sadly, it was just the one, but sometimes that’s enough to trade invest.

We begin this one on the backlot of a small studio. It appears we are in the past as this stage is filled with the grit of real props and people working practical effects. No Green Screen CGI trickery is going on here. What you see is what you get. Notice that we focus in and learn one of the crewmembers is about to get left behind. Not a good thing, right? 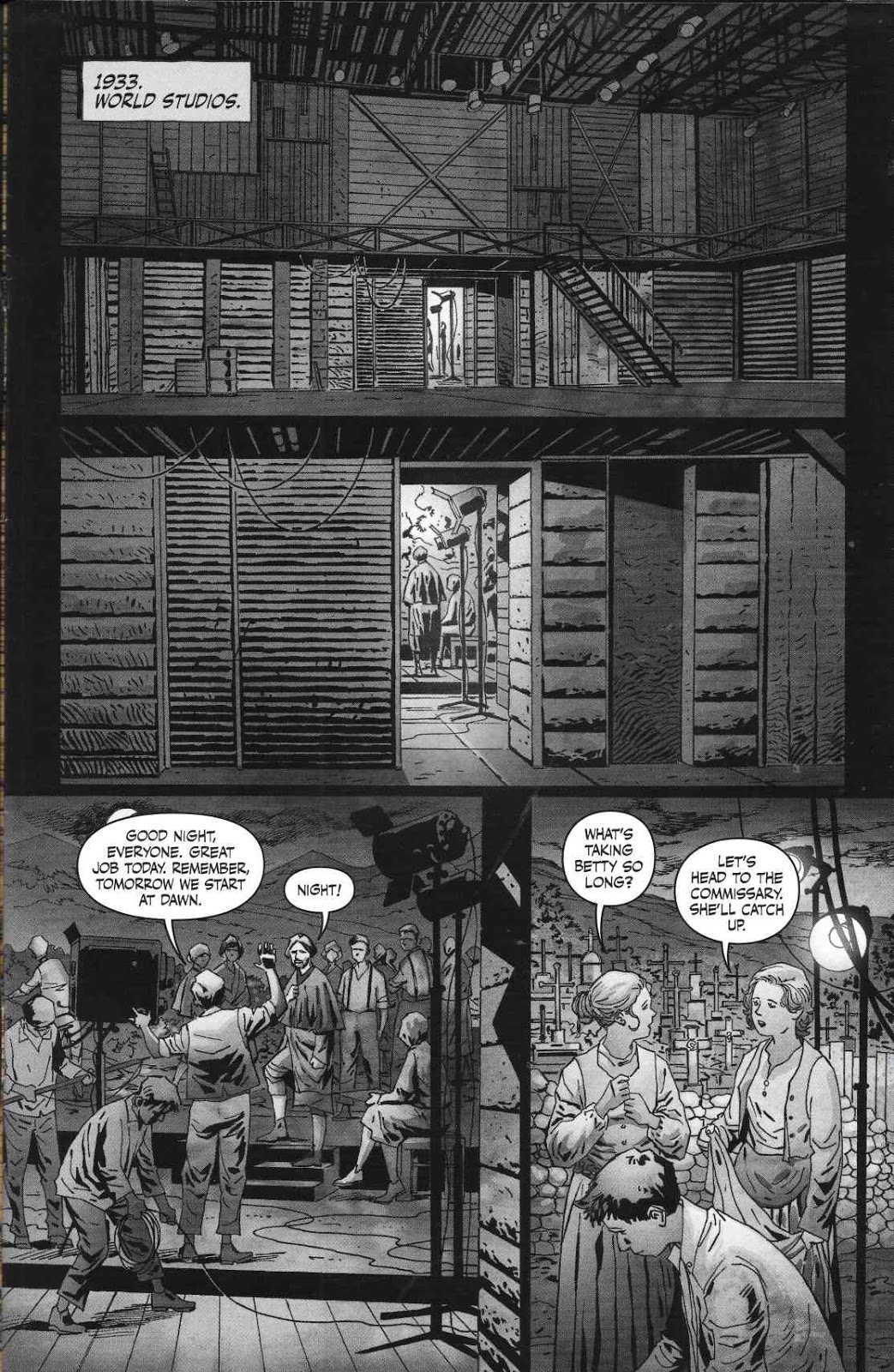 And here’s Betty, victim number one, as she packs up her case (probably a makeup technician) and asks them not to turn off the lights…which someone does anyway. And as she wanders through the fake cemetery to the exit, a clawed hand grazes a tombstone. 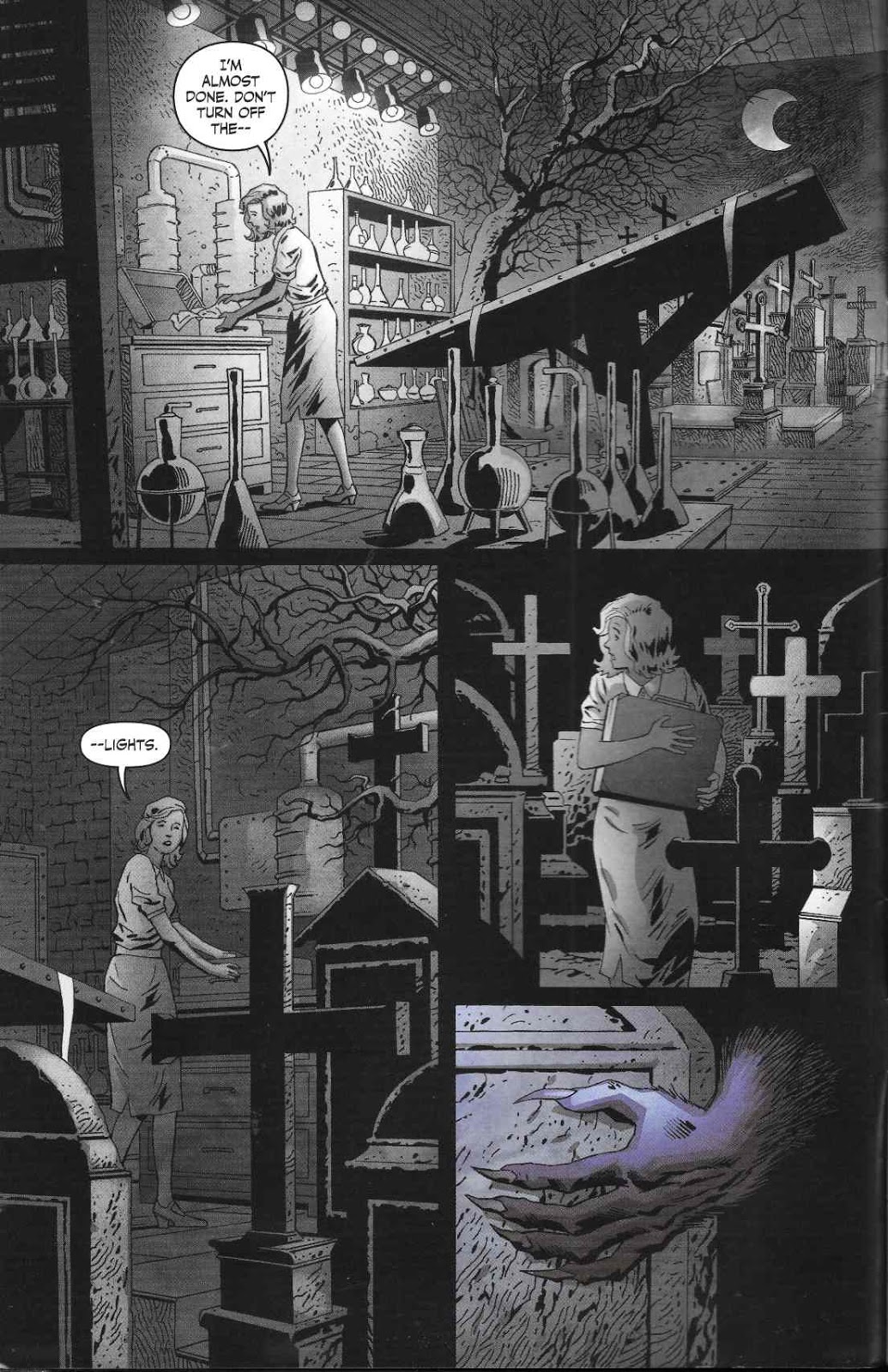 Insert Chase Scene! I will be honest that when I saw this I just assumed this was the stunt double in a werewolf costume or something. That we would Scooby-Doo our way out of this first part… 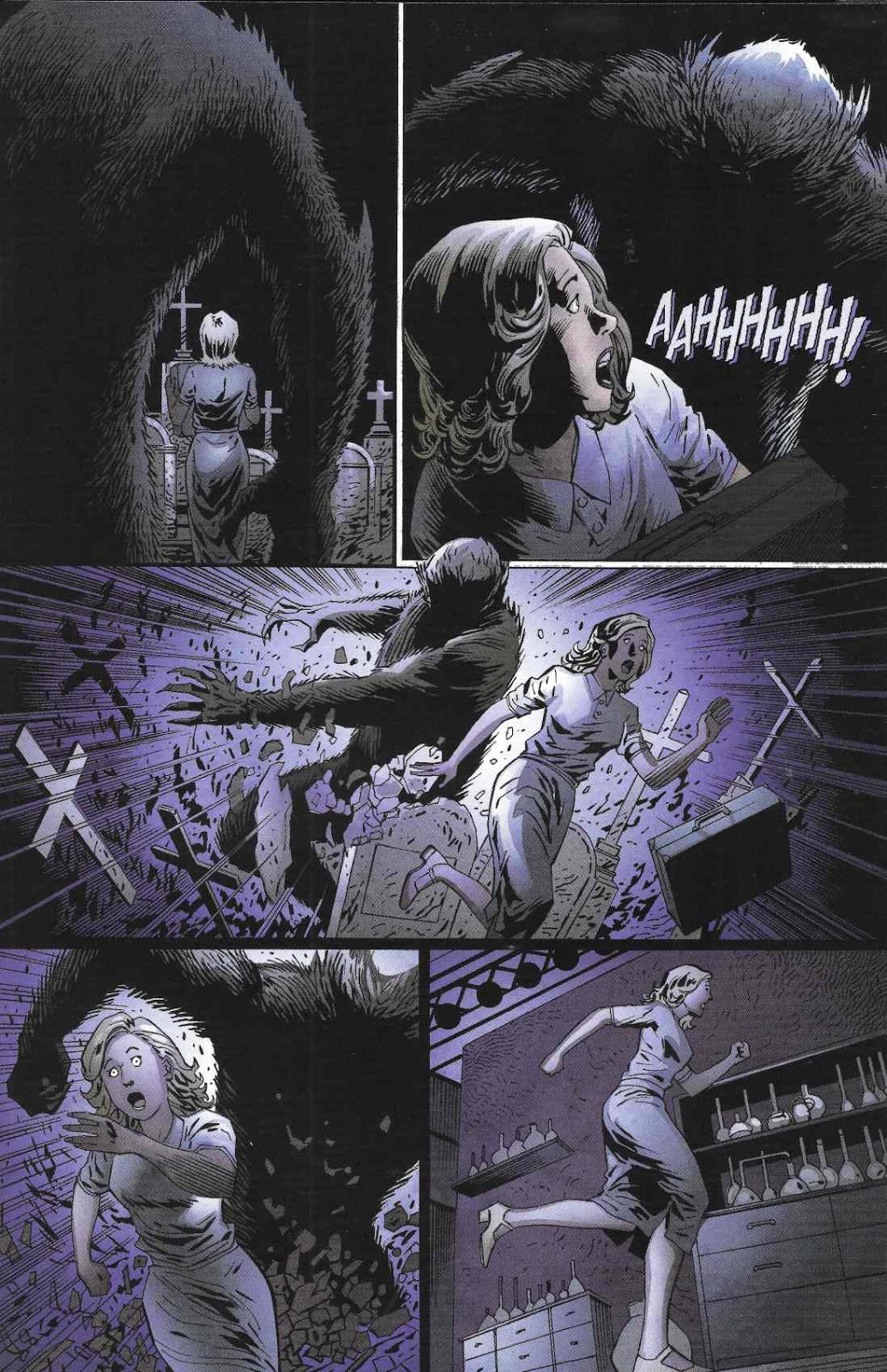 …I was really, really wrong though. Readers, time to say bye, bye Betty. She is torn up by the werewolf. 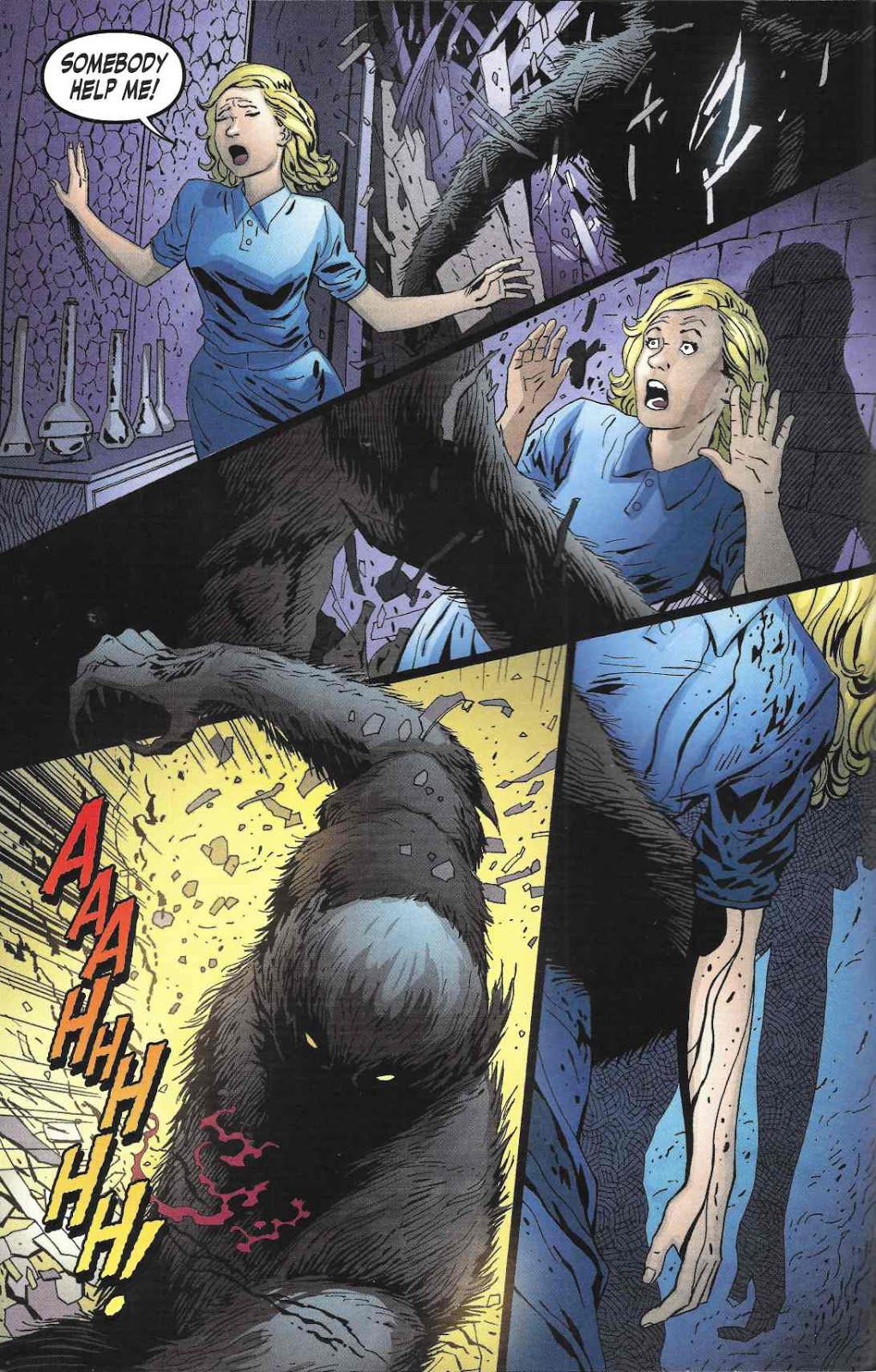 So now we’ve set the story in motion. Strange things are going on at World Studios. People are getting killed in a manner that looks like a wild animal got after them. Now we need someone to work on this mystery. If I don’t miss my guess, our dashing, good-hearted All-American boy is right behind that doorway… 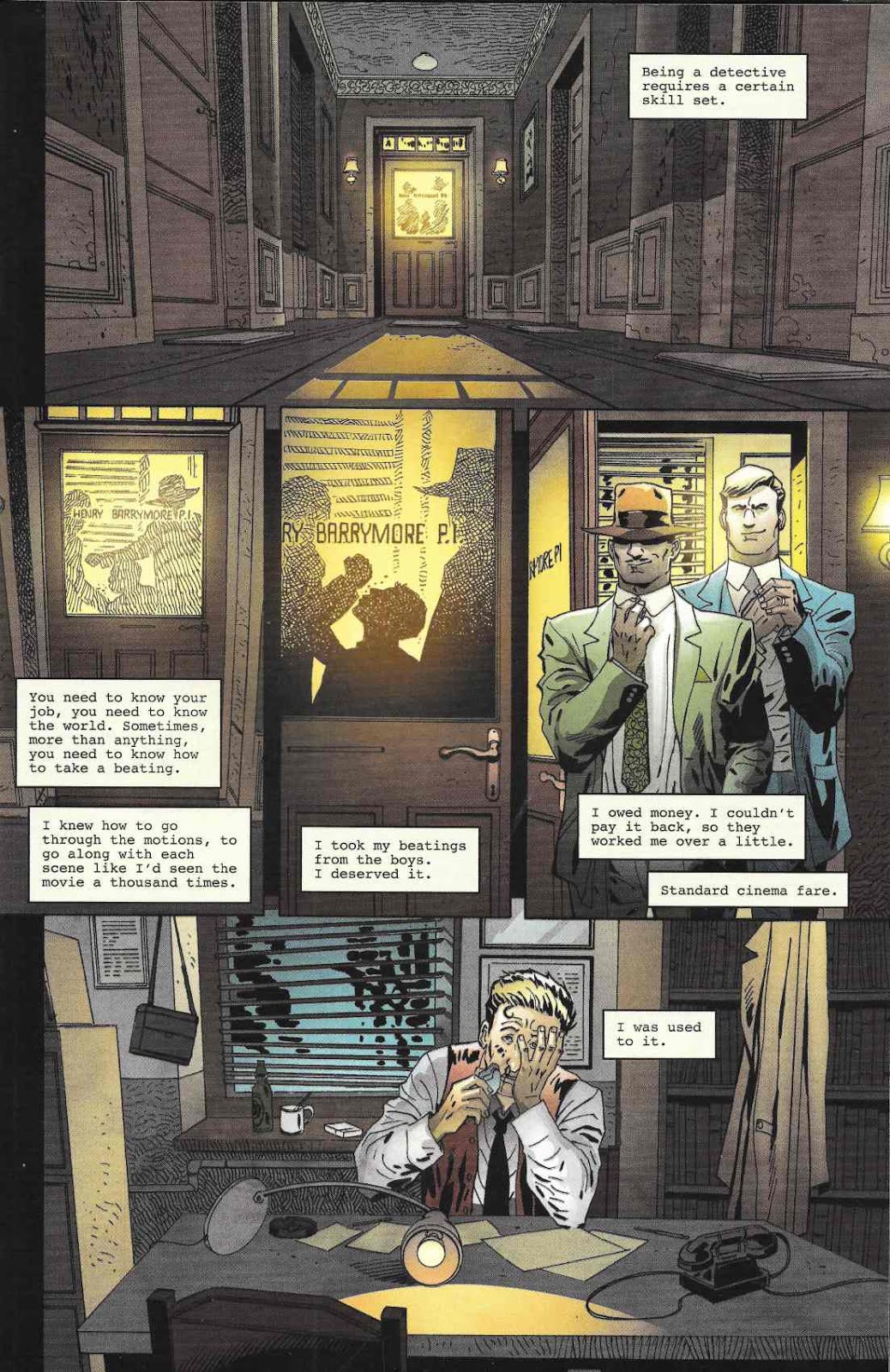 Except for one thing. I forget we were in the noir genre. Henry Barrymore is our protagonist and I think we are going for the “whore with a heart of gold” logic with him. He’s got demons, of the figurative nature, clinging to him. He’s built up gambling debts, possibly making him addicted to that life, and this isn’t his first time around.
When who should step into his life, but THE DAME! (it’s always THE DAME, but none of us mind the cliché.) 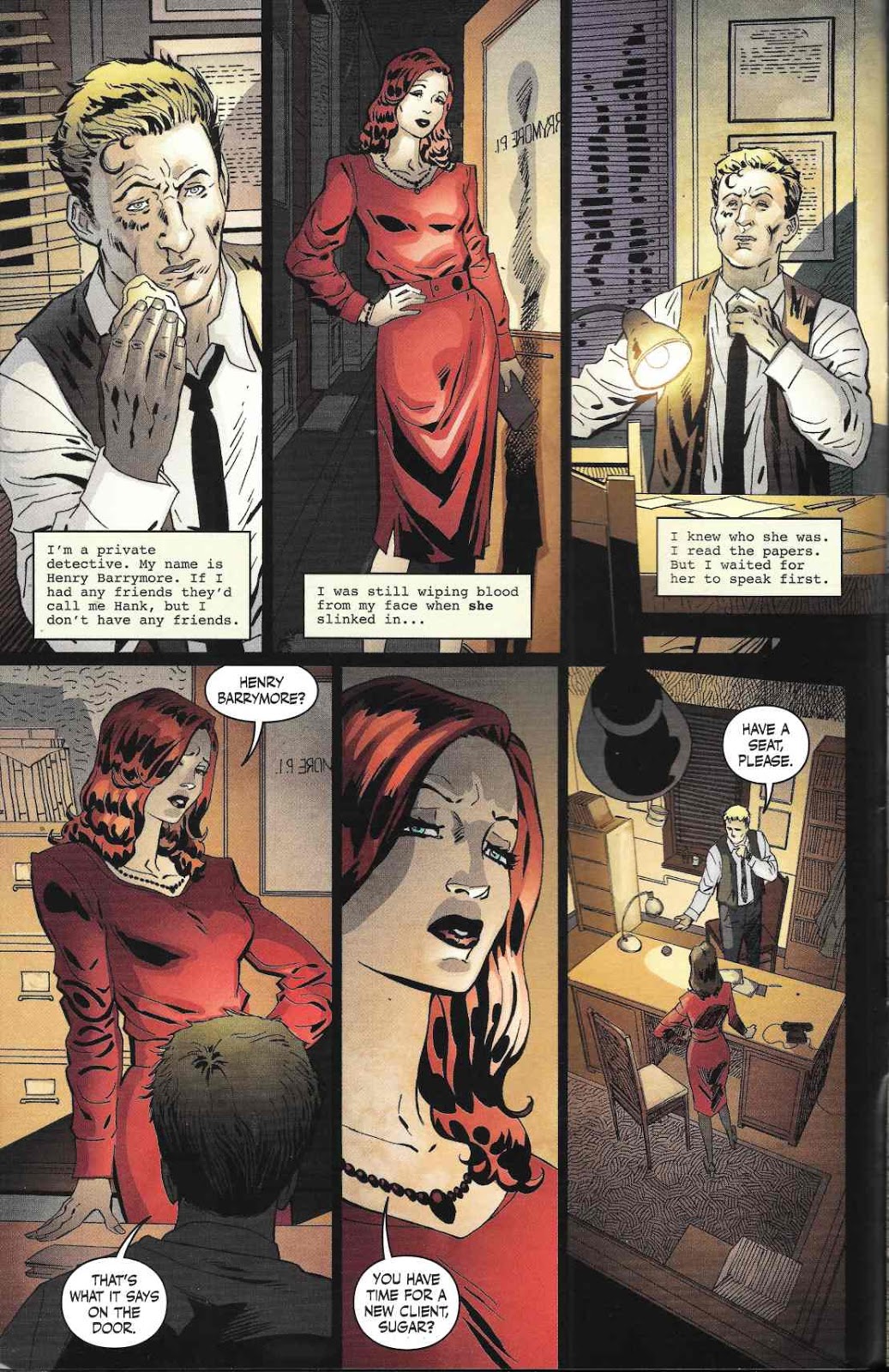 It’s actually kind of comforting that all of this feels like a detective story we’ve already seen. The dialogue is fun and has the flavor of the genre. It’s a good, if totally expected, old movie plot that has been given a more colorful coat of paint. 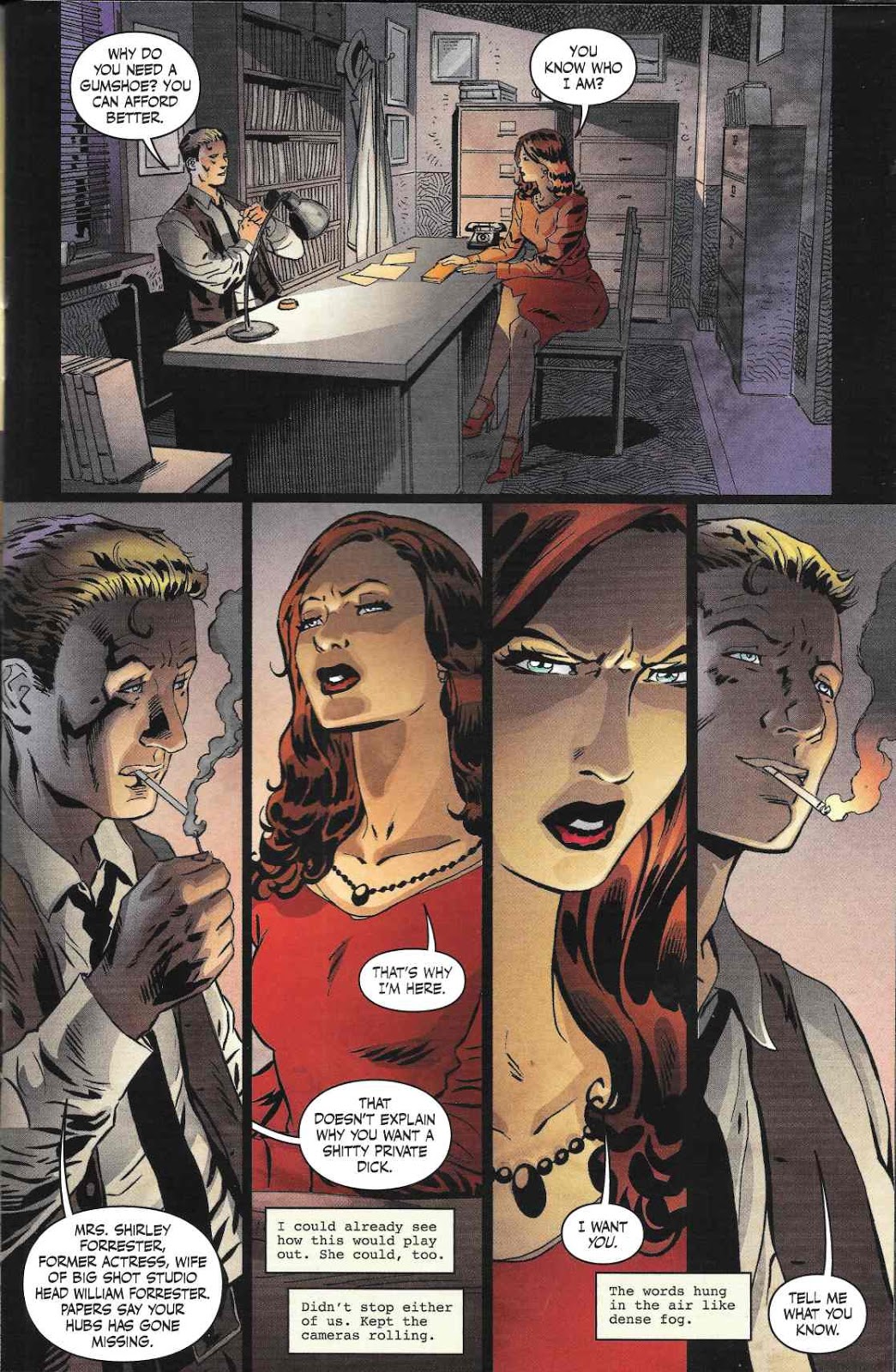 And here we go with our story THIS time: The woman’s husband is missing and she wants Barrymore to find him. The fact that she has other resources to find her missing studio head, means that she must not trust what they would find or that she needs a patsy… it is always one of the other. Barrymore decides to bite. He could certainly use the money, which as we all know is another of those reasons The Dame always comes to that specific Private Dick in these tales. 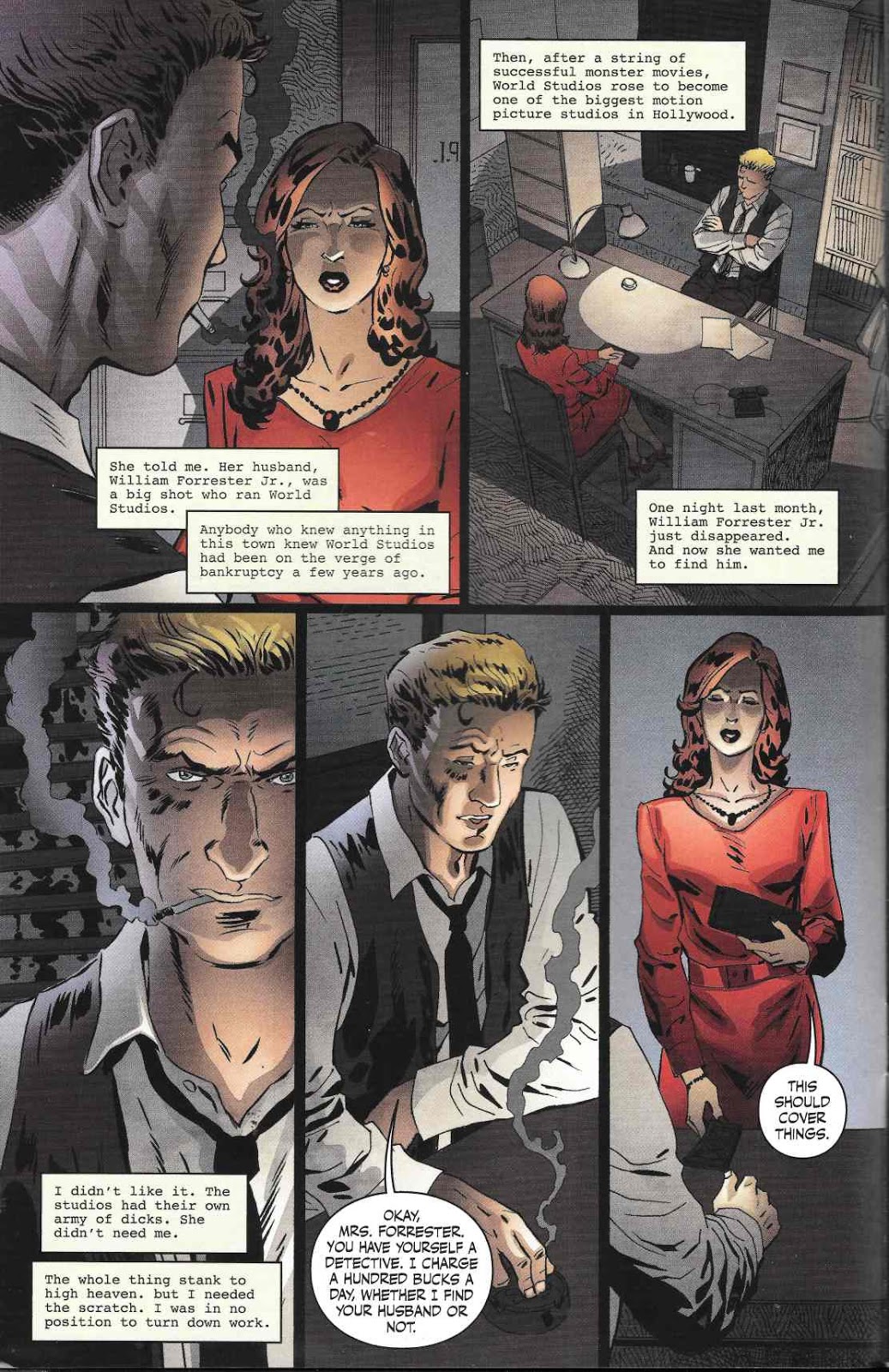 Plus there’s always the assumption that she might turn into a love interest. I think Barrymore’s on to this one and too experienced / jaded to fall for it, but we’ll see. 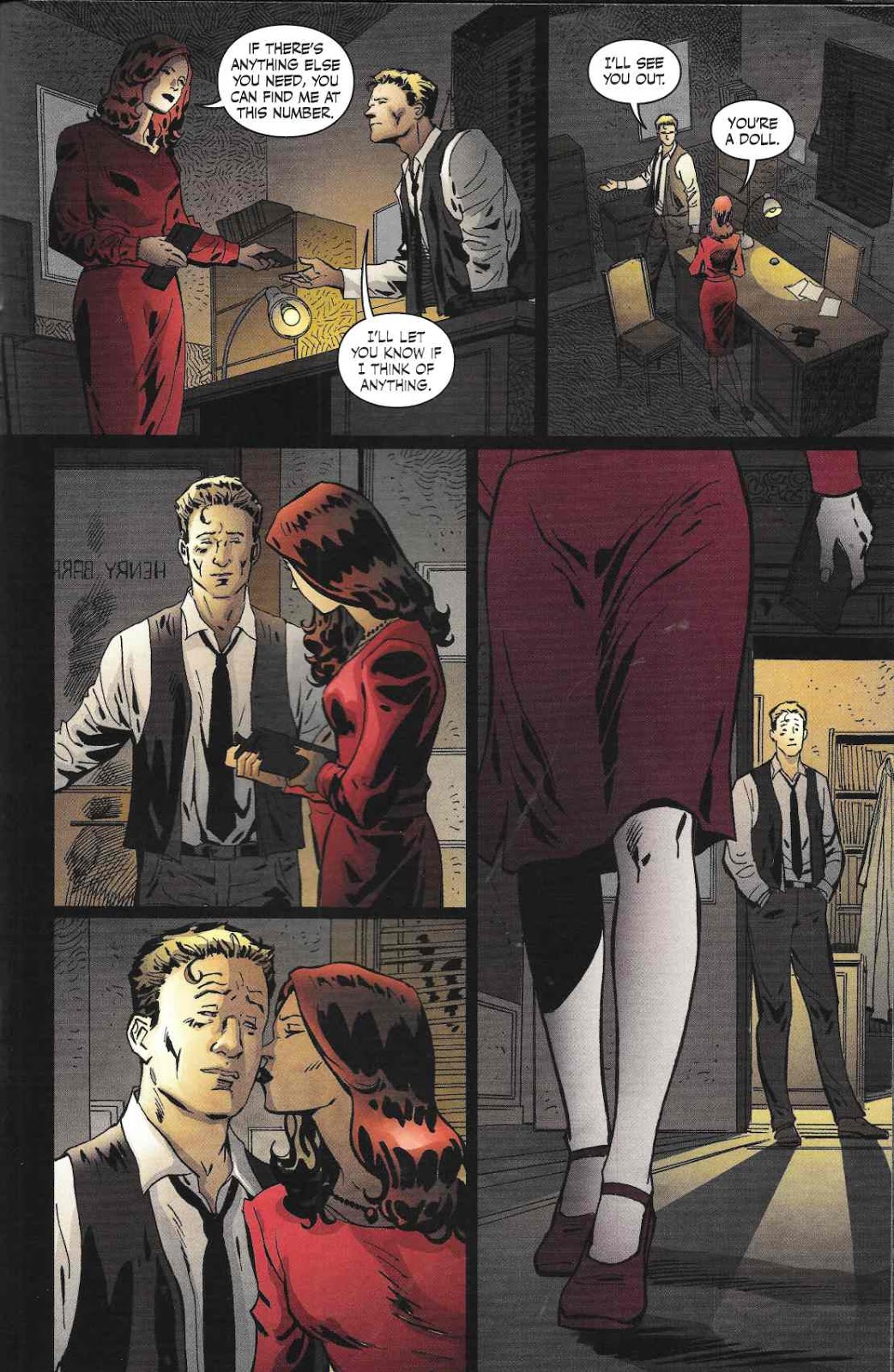 Barrymore’s on the case though and he starts by hitting up his informant at the local paper. This leads him to finding out about a “string” (not just one) of murders that are happening at the studio that are being covered up. 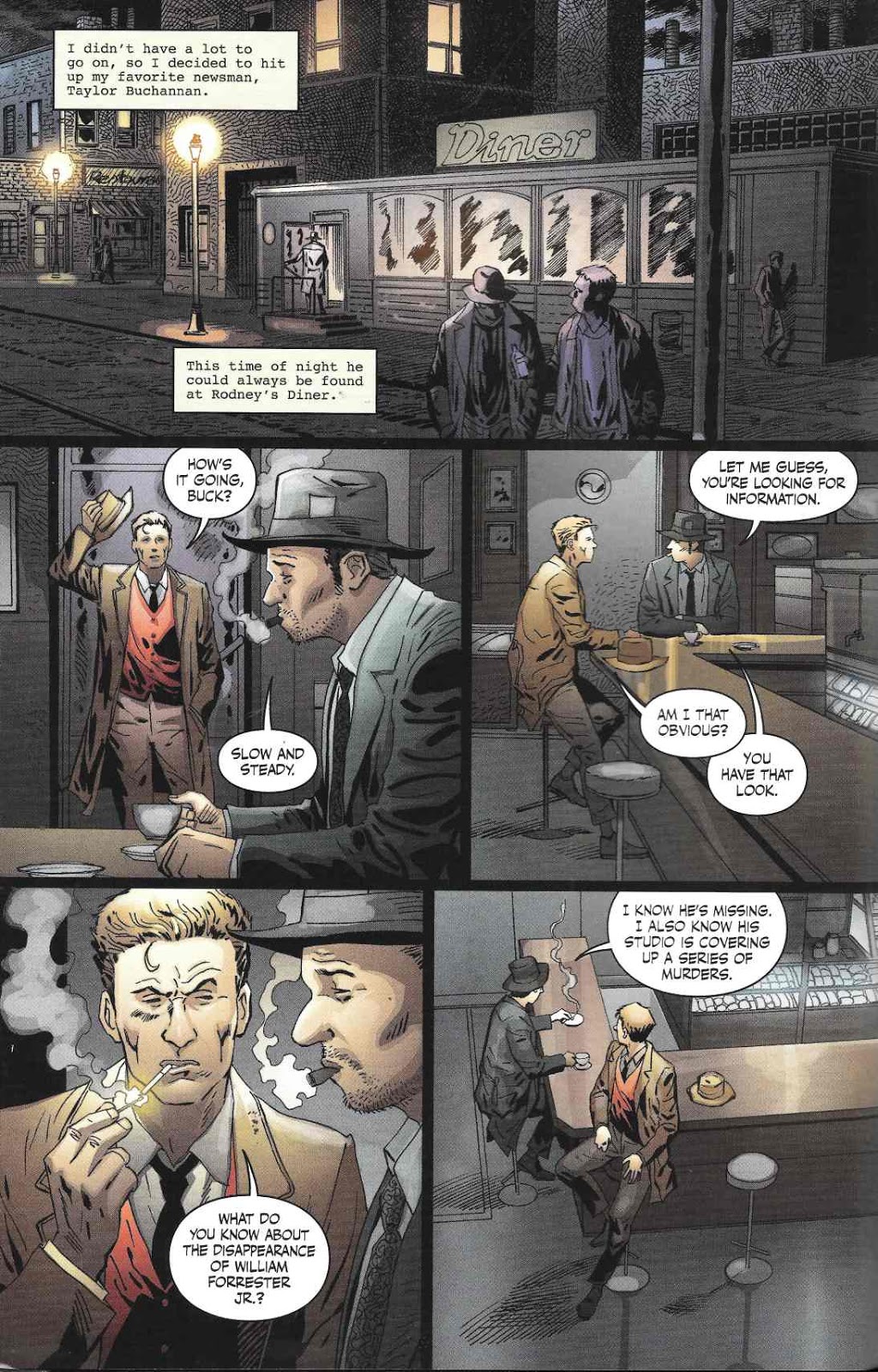 Although the last one ended up not missing, but dead. That was our fair Betty in the opening pages. She appeared mauled as if by a wild animal. Or werewolf. 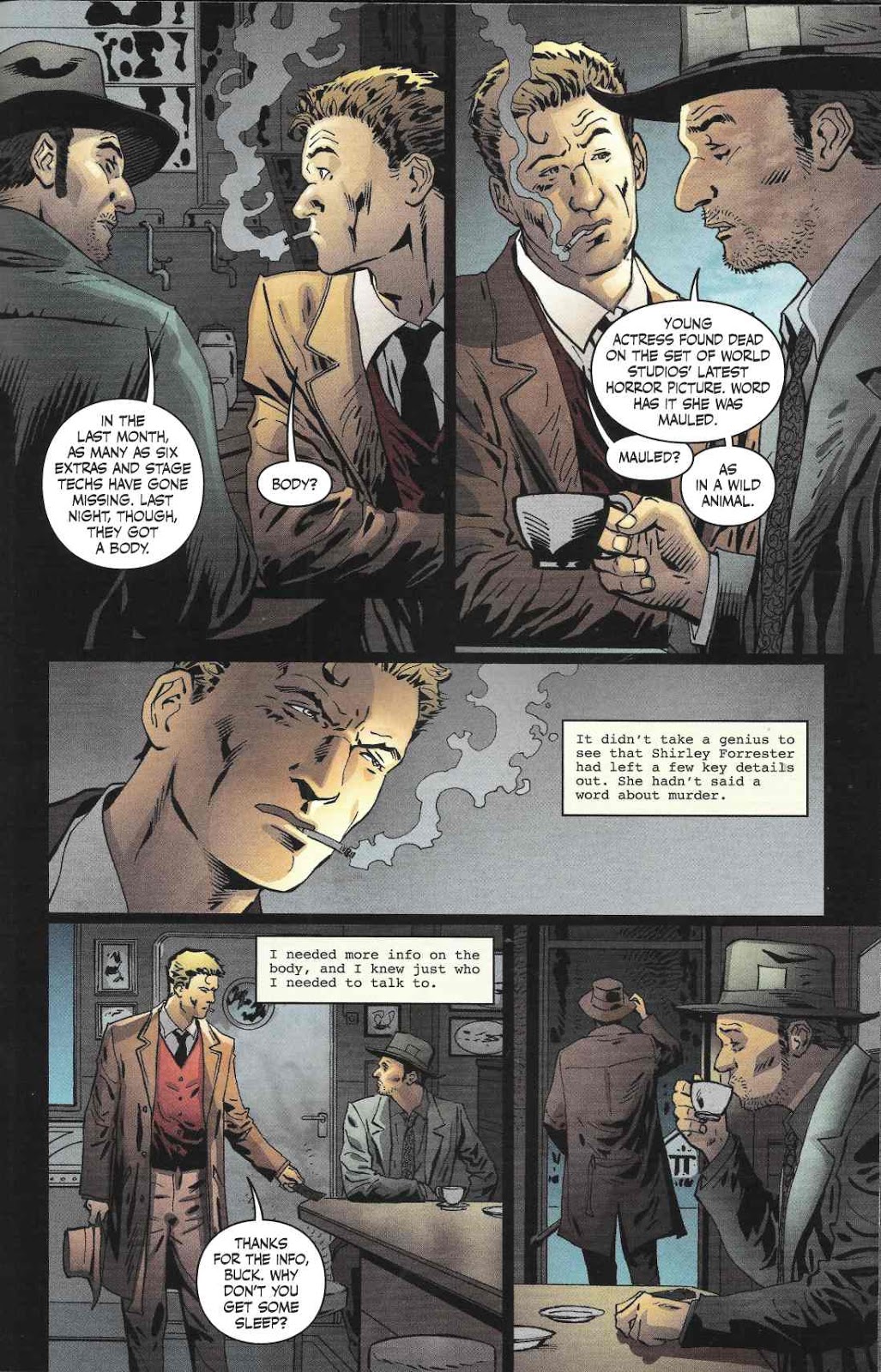 Being a great private dick means being well connected, and Barrymore’s next call is to his friend Cecil at the morgue. Cecil just started working on Betty’s body… 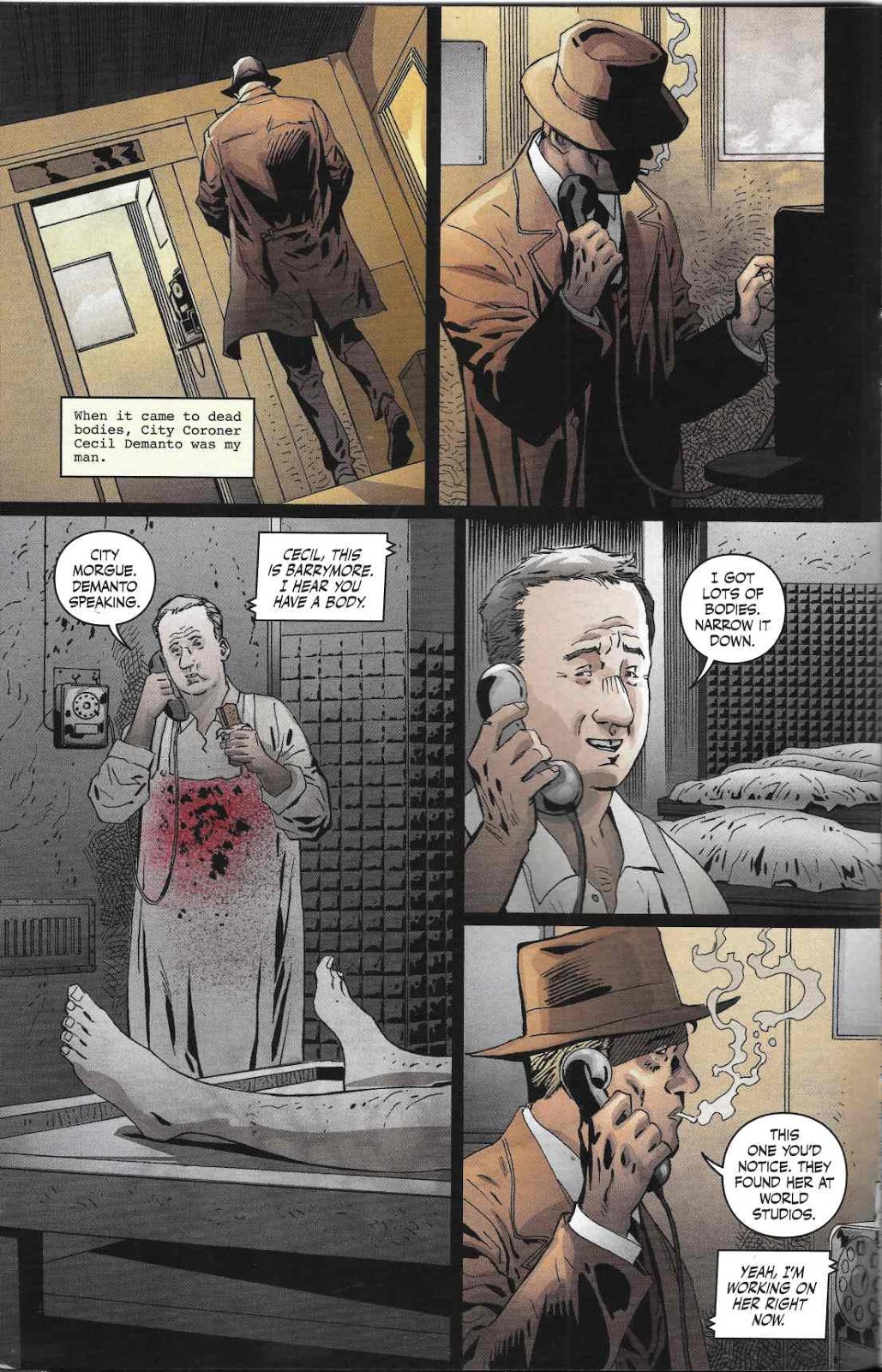 …but there are some odd things going on because the wounds on her dead body are healing. Yeah, fellow audience members we know the score now.

Too bad Cecil doesn’t. Because that half-werewolf in the background getting off the slab certainly isn’t going to let him finish his sandwich in peace. 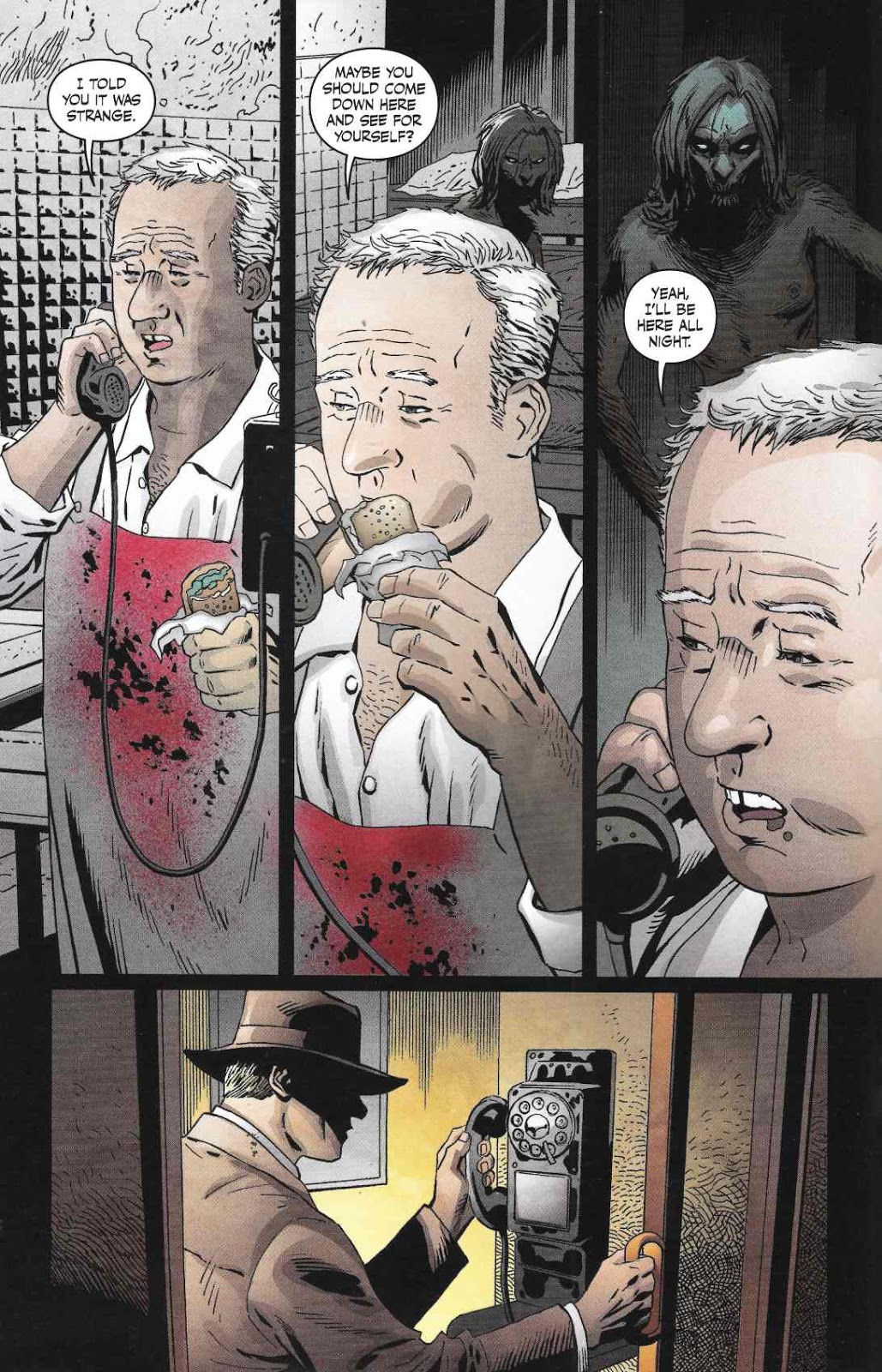 Barrymore arrives at the morgue too late to save his friend. (whom I will assume is TOO dead to come back as a werewolf. What are the rules here?) 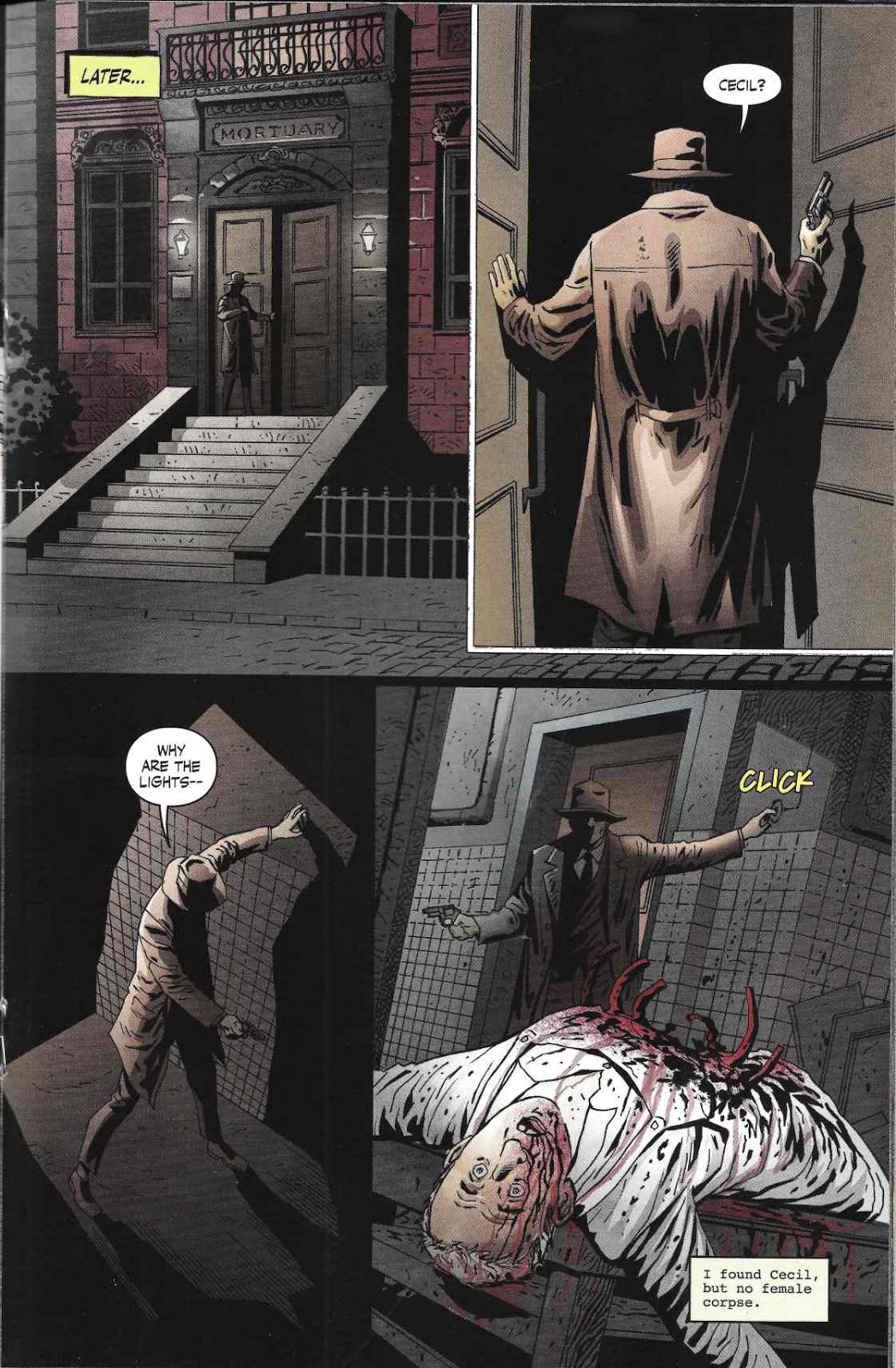 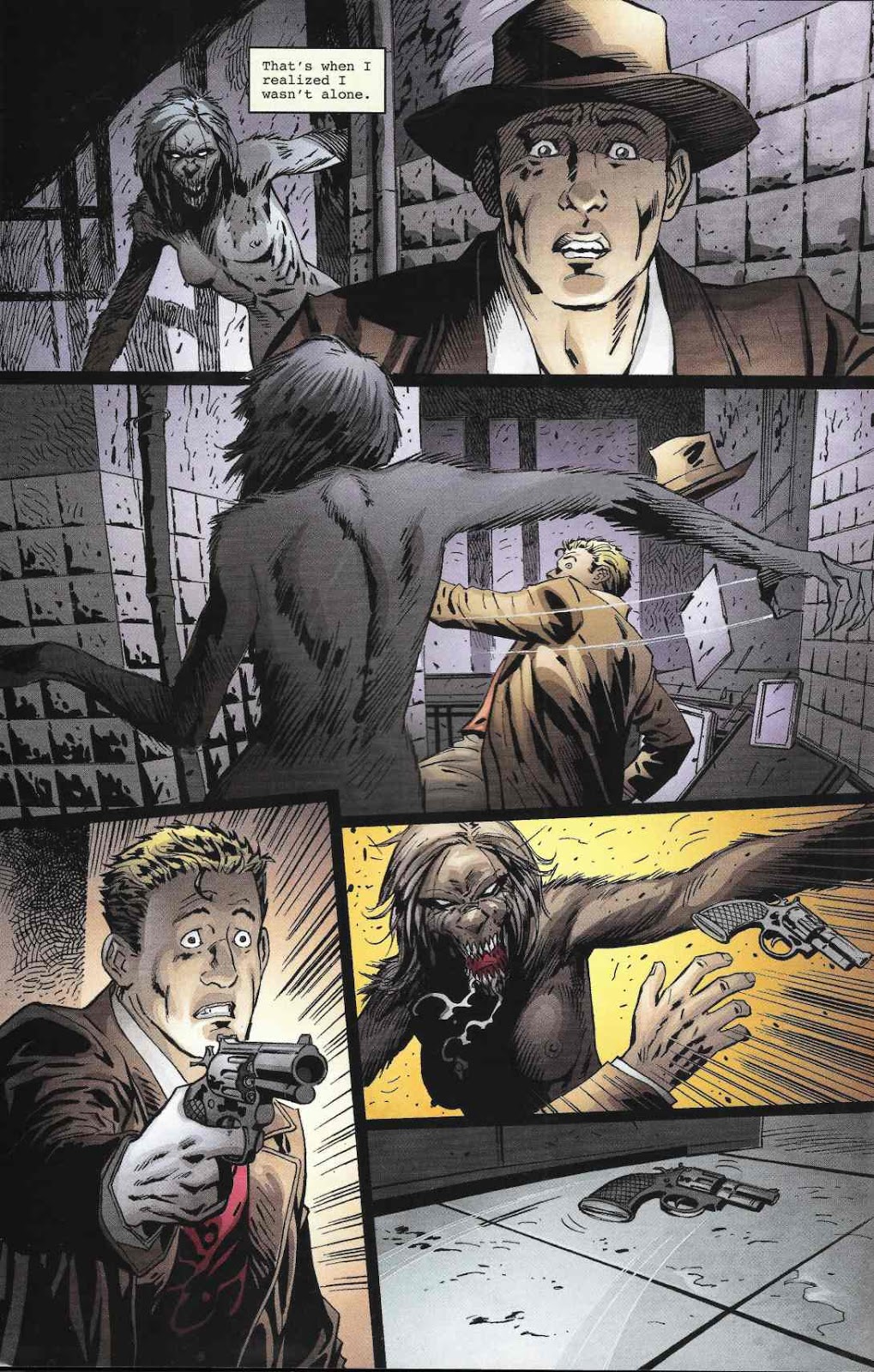 …not sure if that knife has any silver in it or if Betty gets scared by the approaching police sirens. What I do know is that her escape leaves Barrymore holding the bag… 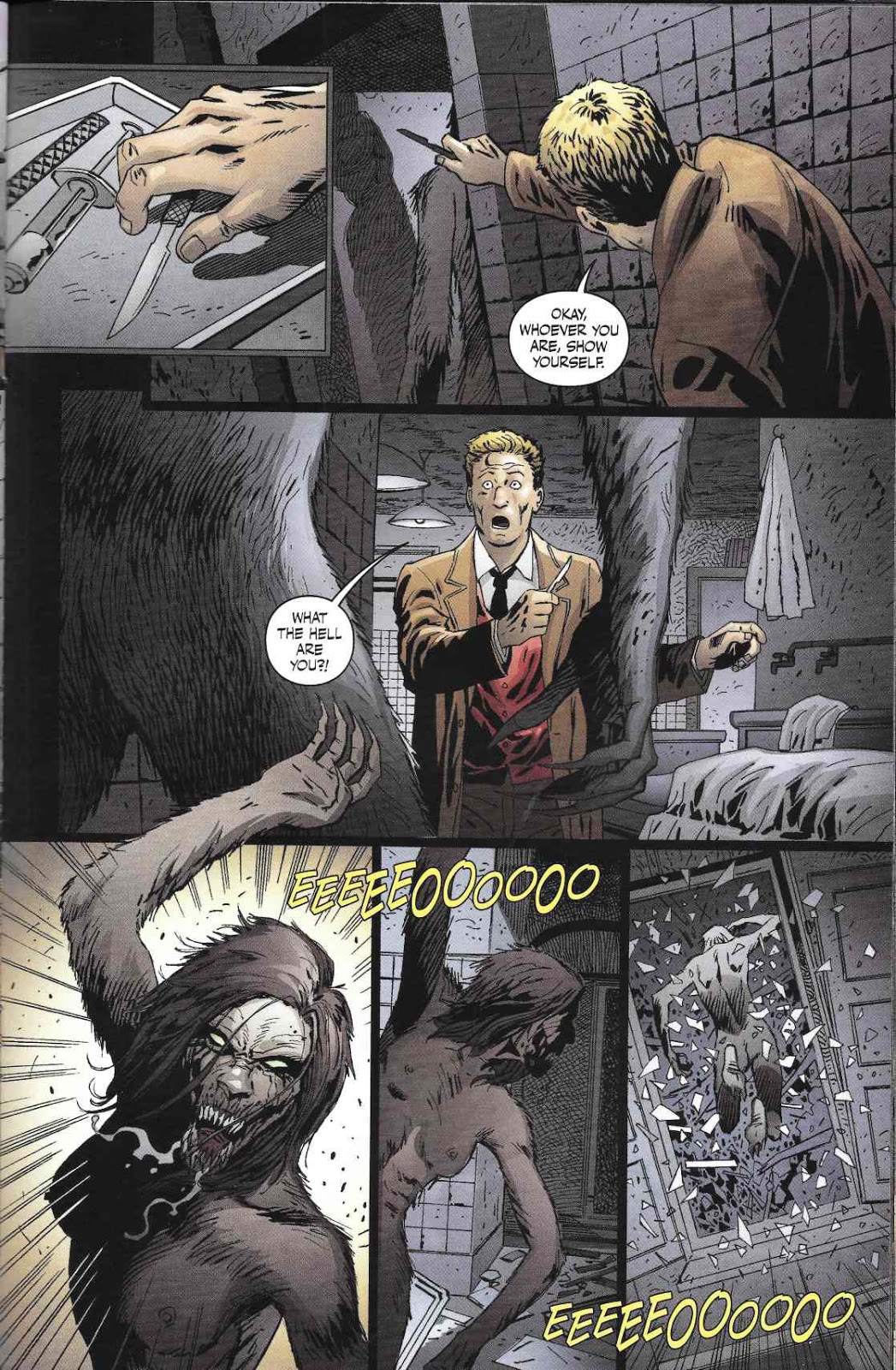 …and facing a lot of questions. 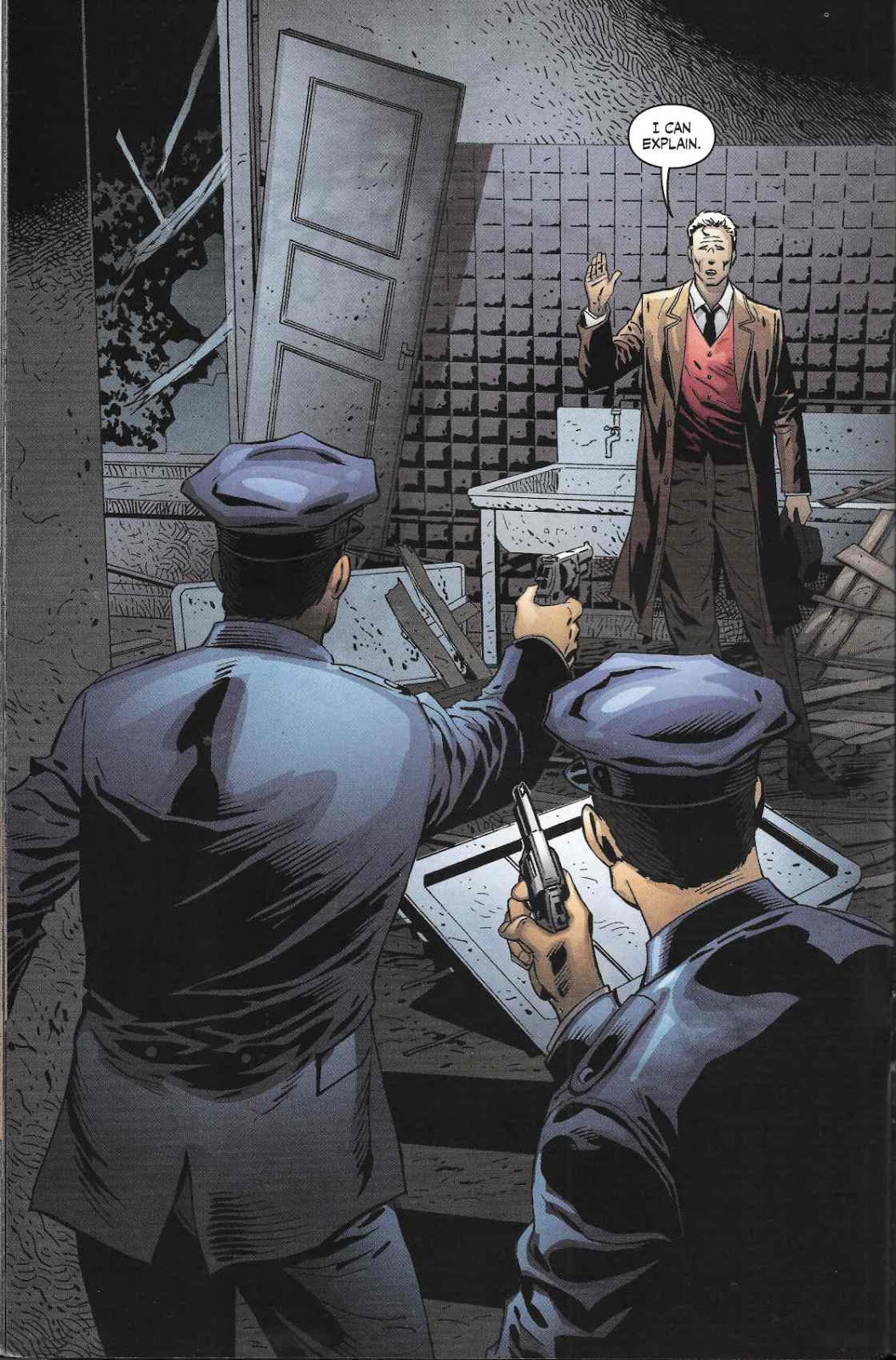 And again, we are by the numbers. Barrymore’s PI has a rough relationship with he police and knows which side his bread is butter on. The side that doesn’t mention dead bodies coming back to life as werewolves. And after losing a good friend and a night of intense police scrutiny, what could be more relaxing than a nice stroll home… 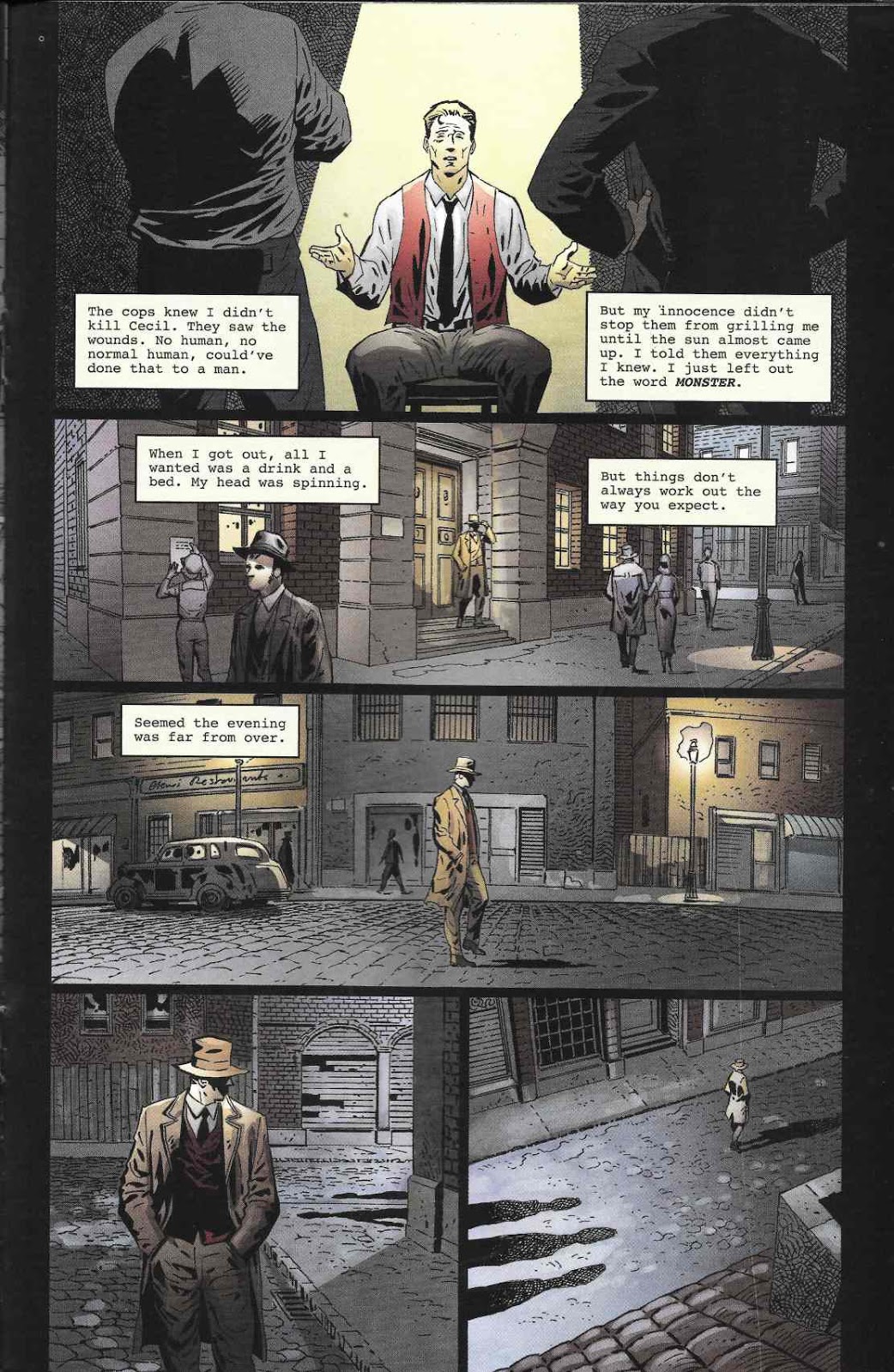 …where you find yourself being followed by… 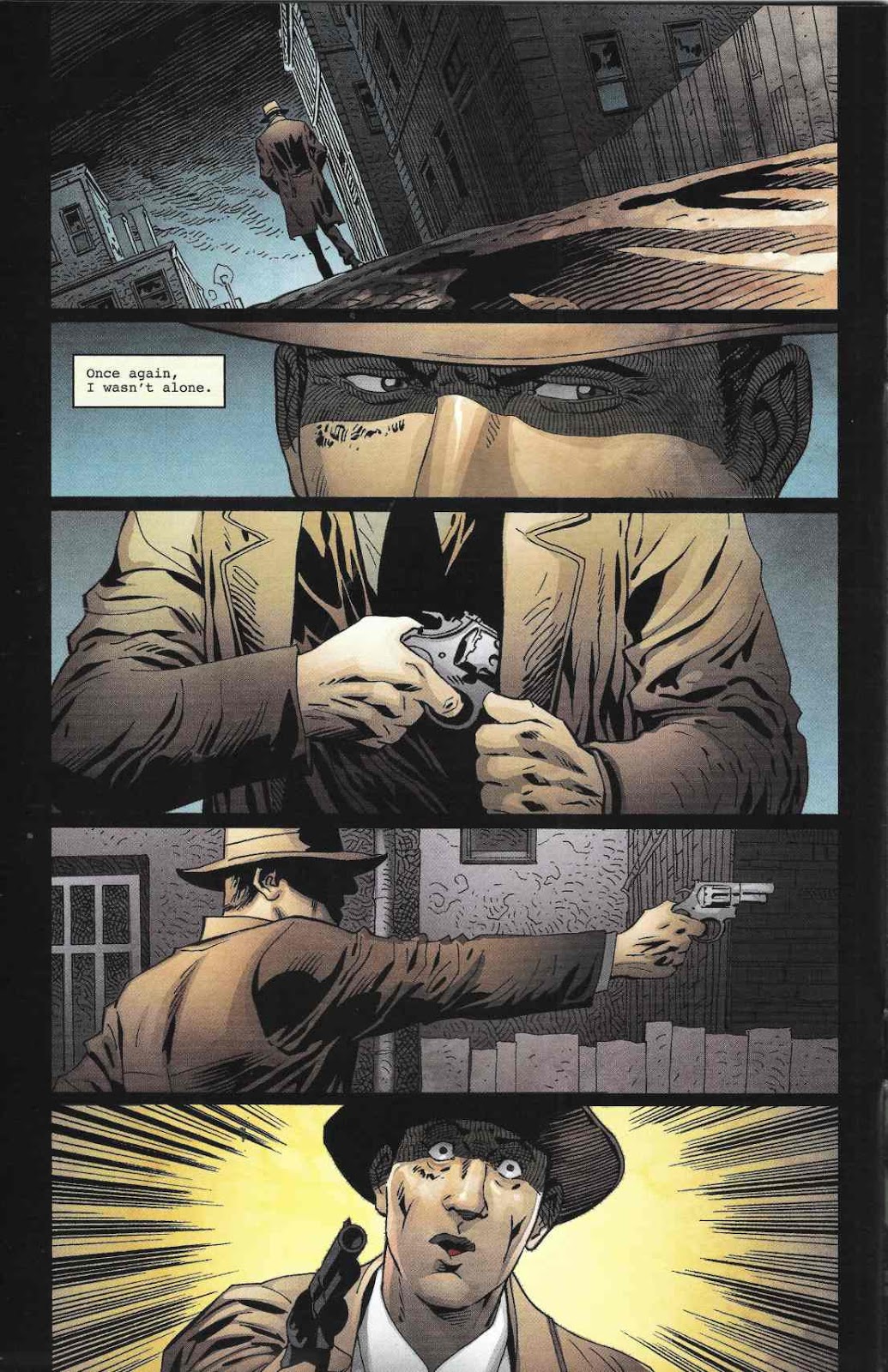 …demons and a man in a trench coat. 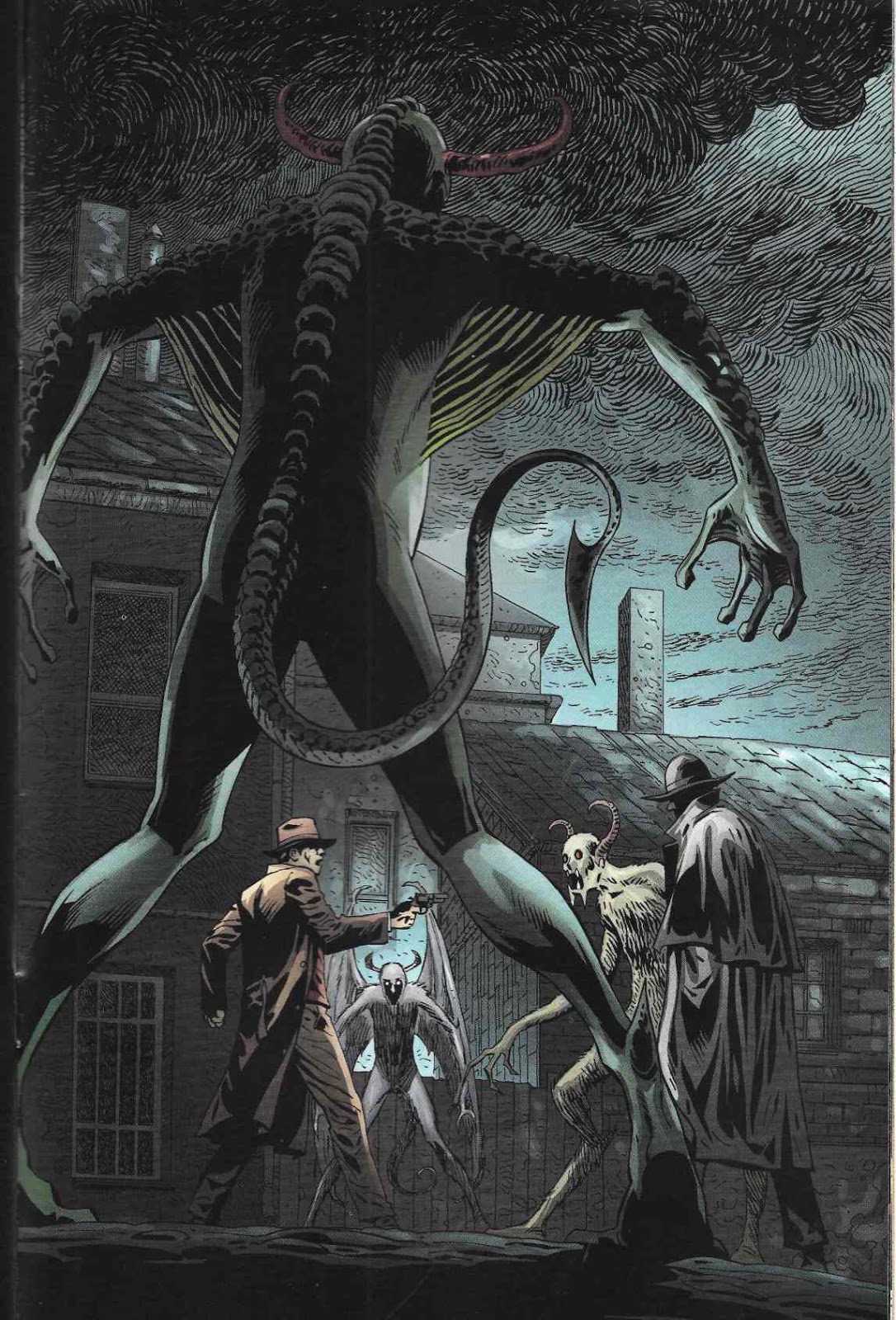 Barrymore proves to be a shoot first, ask questions later kind of fella. Trench coat man proves to be an explode into a ball of flaming death when shot, so it all works out. But seriously, WTF is going on here? 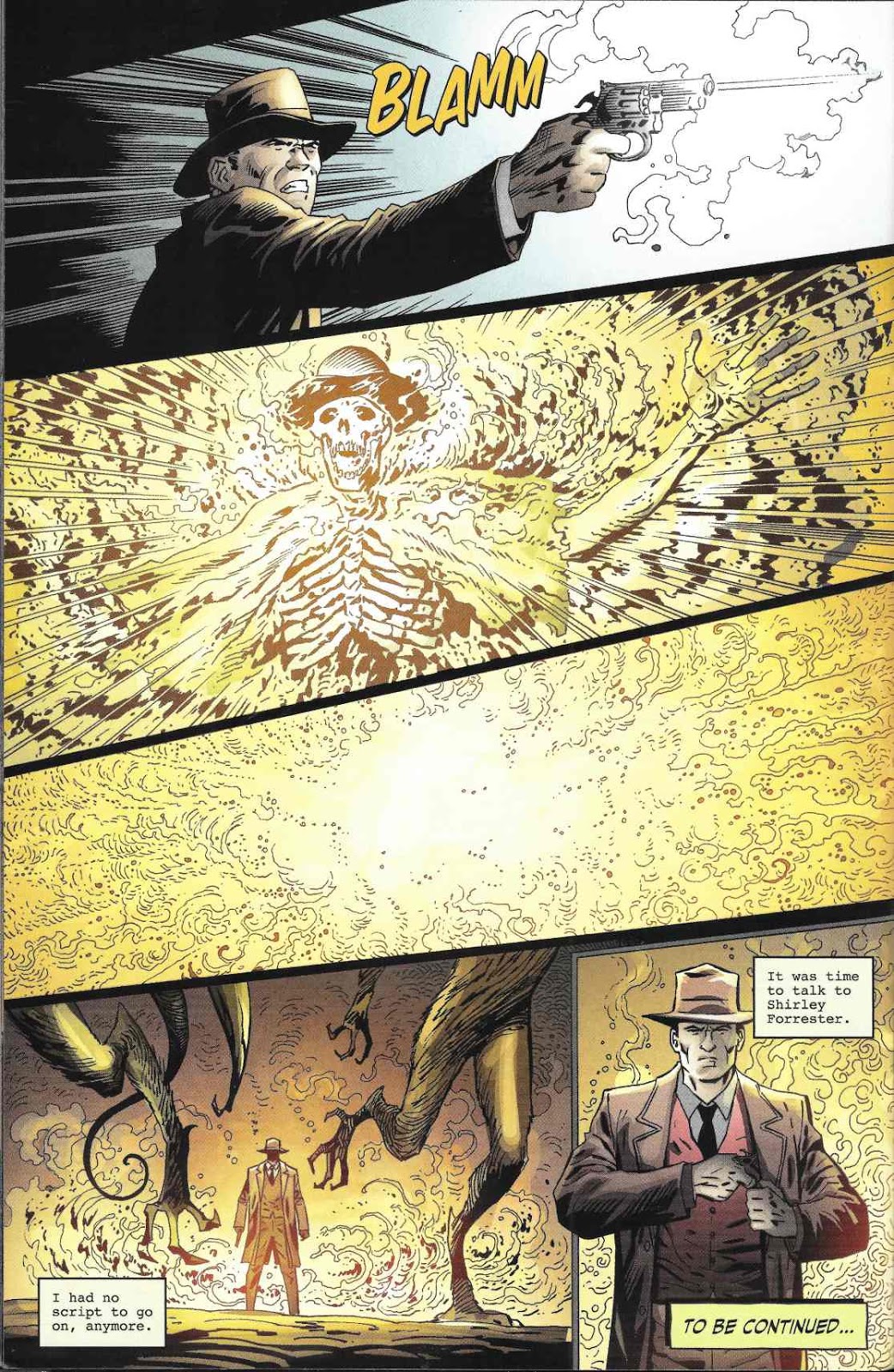 Well, for that you’d need to buy next issue. Good job setting things up Monster World. Your noir setting and cliffhanger ending really pulled me in. And I’m sure Steve Niles had everything to do with it.
Posted by SonOfCthulhu at 7:11 AM