Fright featuring the Son of Dracula #1 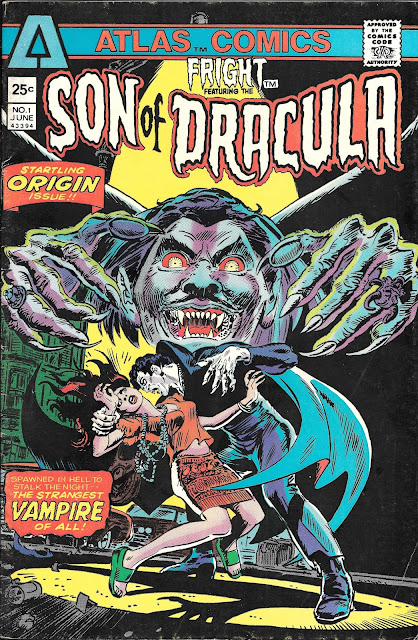 "And Unto Dracula Was Born a Son”

Day Seven of Dracula finds us unearthing this gem from little known but fondly remembered publisher Atlas/Seaboard. Created when Martin Goodman left Marvel in 1972, Atlas/Seaboard was ahead of its time in a bunch of ways. They championed creators’ rights which lead to many top artists/writers contributing content to their small stable of books. They produced both color and black & white titles, preceding the 80’s boom in non-color comics by almost a decade. Sadly they also were fighting in a turbulent market that wasn’t kind to new startups. While the fledging publisher put on many titles, none of them survived over four issues and this book came out the same year it folded up shop.

Still in those three years Atlas hosted names such as Neal Adams, Steve Ditko, Russ Heath, Larry Lieber, John Severin, Alex Toth, Howard Chaykin, Rich Buckler, and Wally Wood. Their output is looked upon fondly by collectors and I had to pay a pretty penny to dig this one out of half price’s bins. But YOU readers are worth it.

And the title sort of plays on my name, so there is that too.

This is the ONLY issue of Son of Dracula in existence, our boy never got a second issue. The title is mostly origin and setup, so I don’t have any idea where Fredrich was going to take it next. As for the quality of this boy Drac tale? Let’s dive in and see, shall we?

We begin with some beautiful Thorne art as Dracula spies villagers about to turn a tender morsel of a girl into a crispy critter. Drac takes a fancy to her and decides to intercede, if for no reason other than to use her as a refreshment. 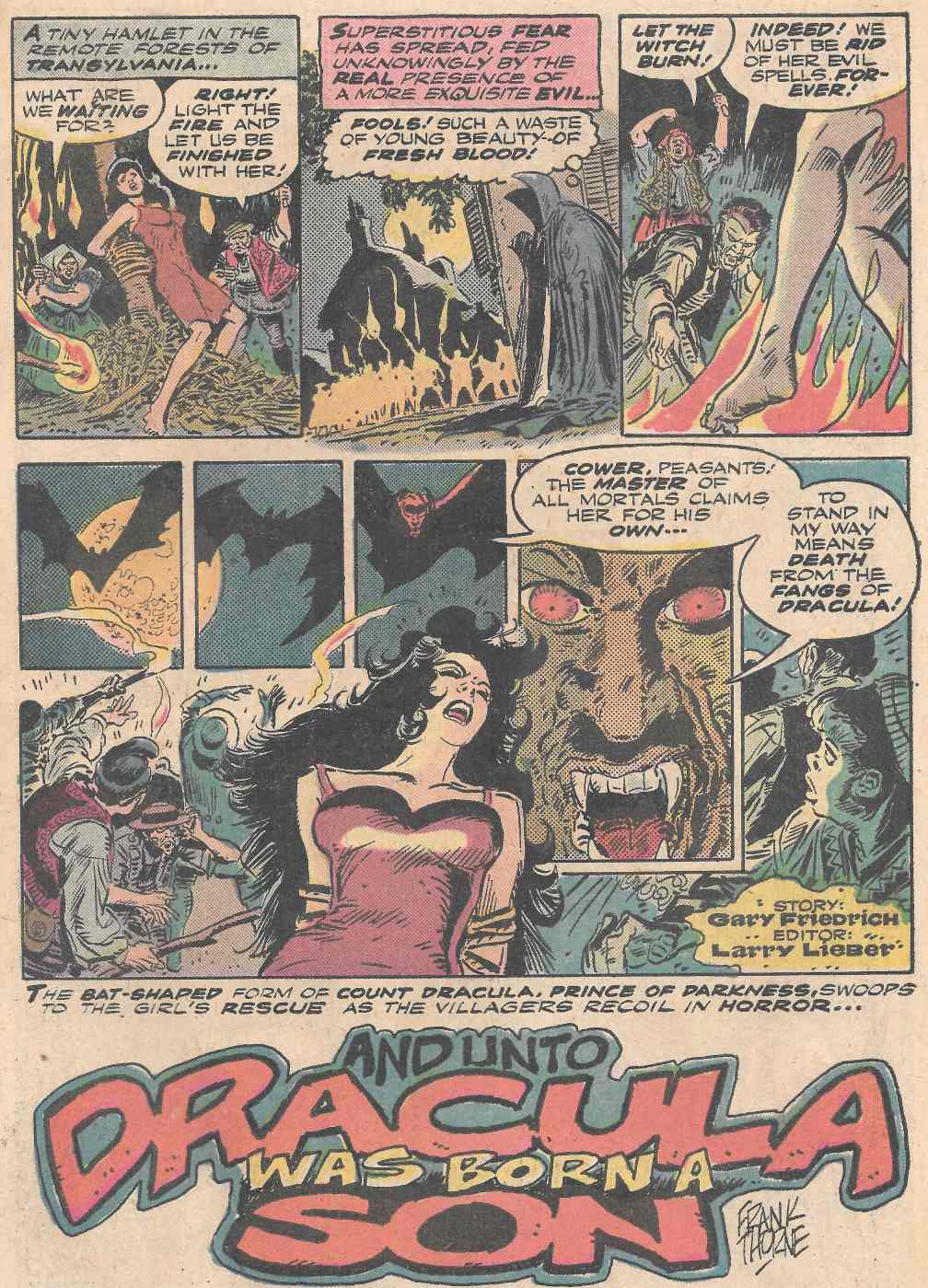 He scares off the pitchfork and torches crowd and then absconds with her prone body to his nearby castle. 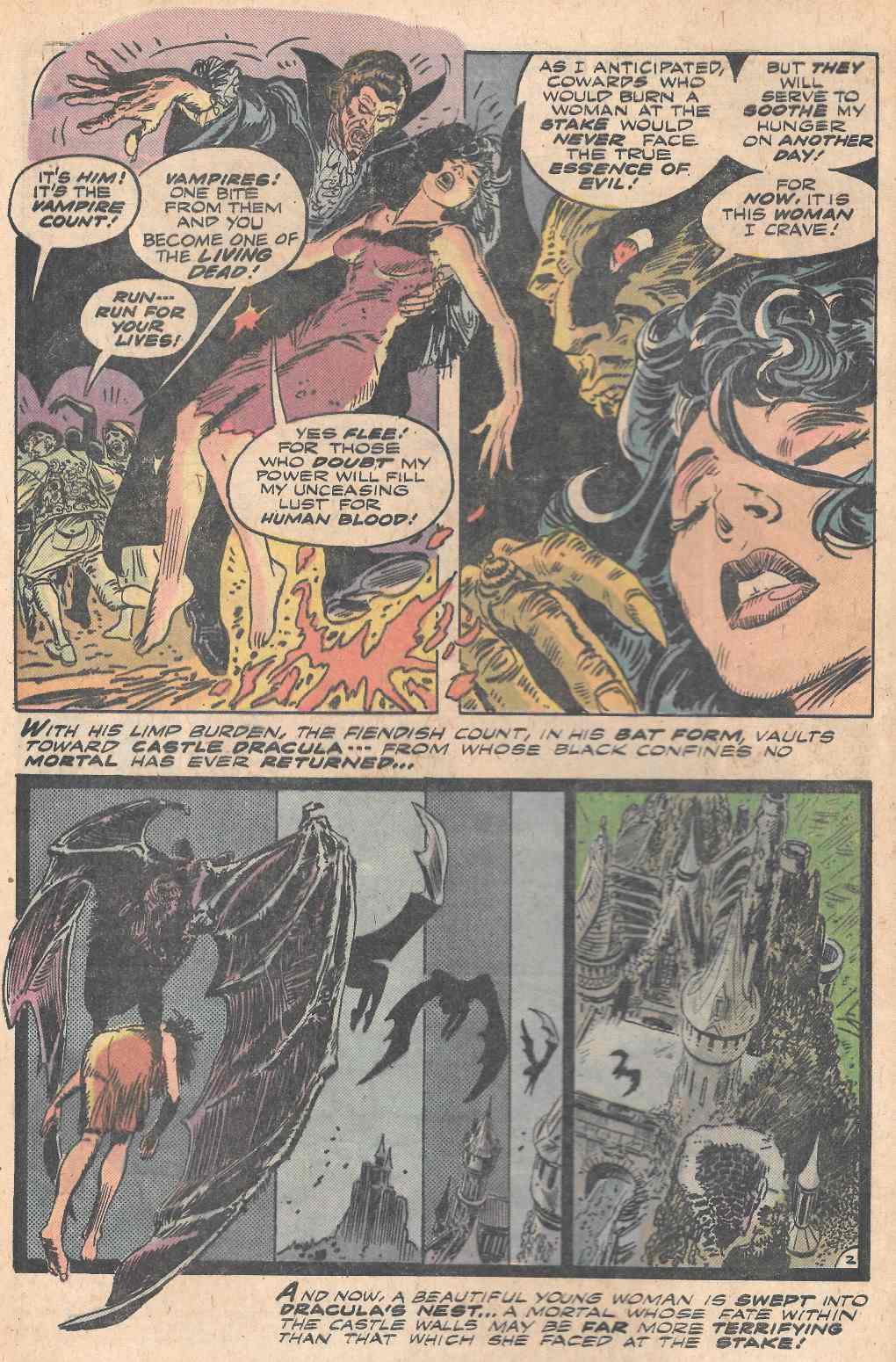 Once there, Drac finds that she bears the mark of his family upon her breast (don’t ask. It must be a thing.) and thus is his fourth cousin (twice-removed?). 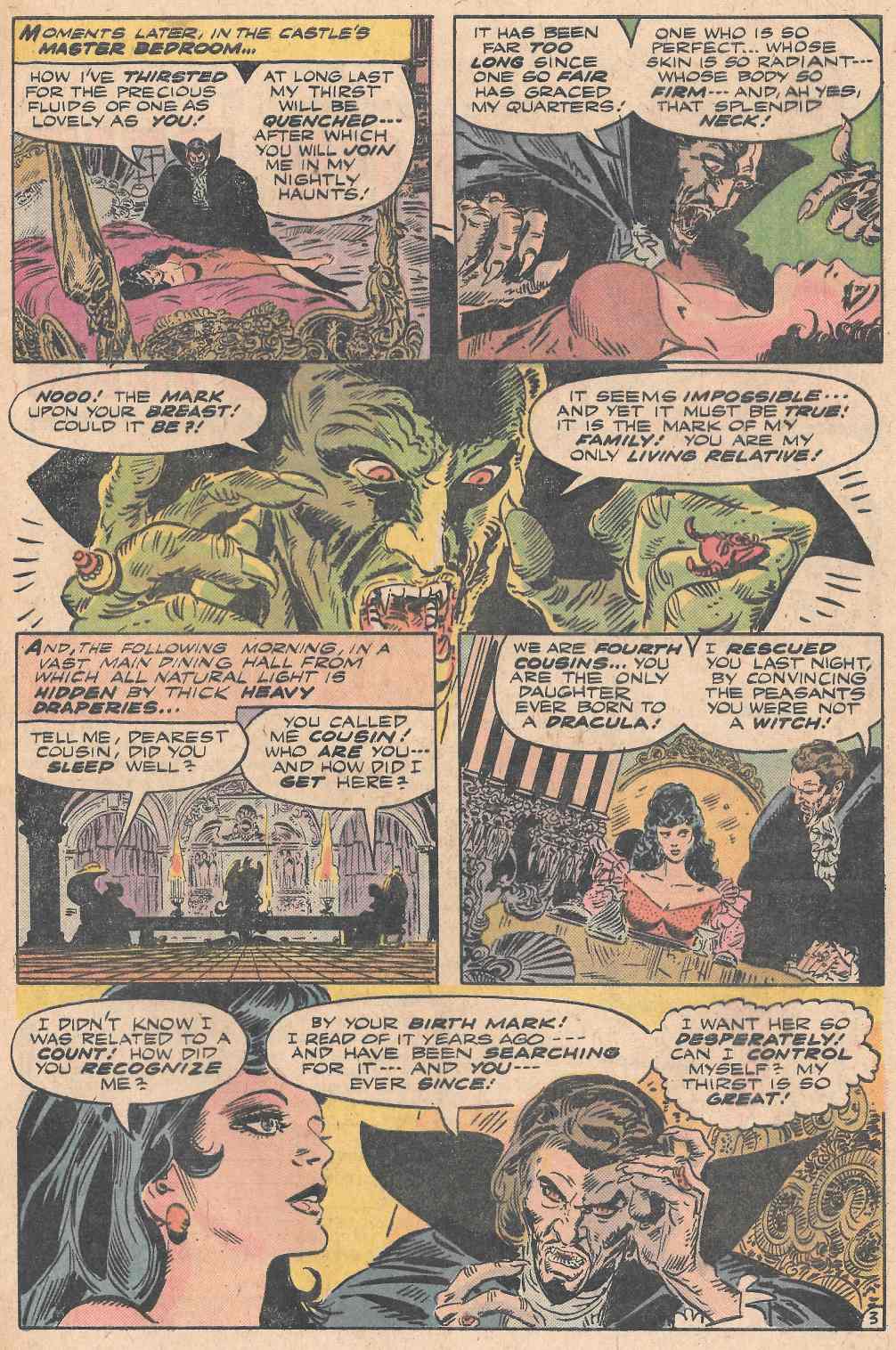 But at first all he wants is to make her a vampire. She comes up with the idea that instead of sucking her blood, that he allows her to become pregnant with his child. She promises him a son, which in no way could she actual know she would give him a son, but I’m counting all this as her trying to save her own neck. Dracula gets his freak on and then has to pop out for a bite. 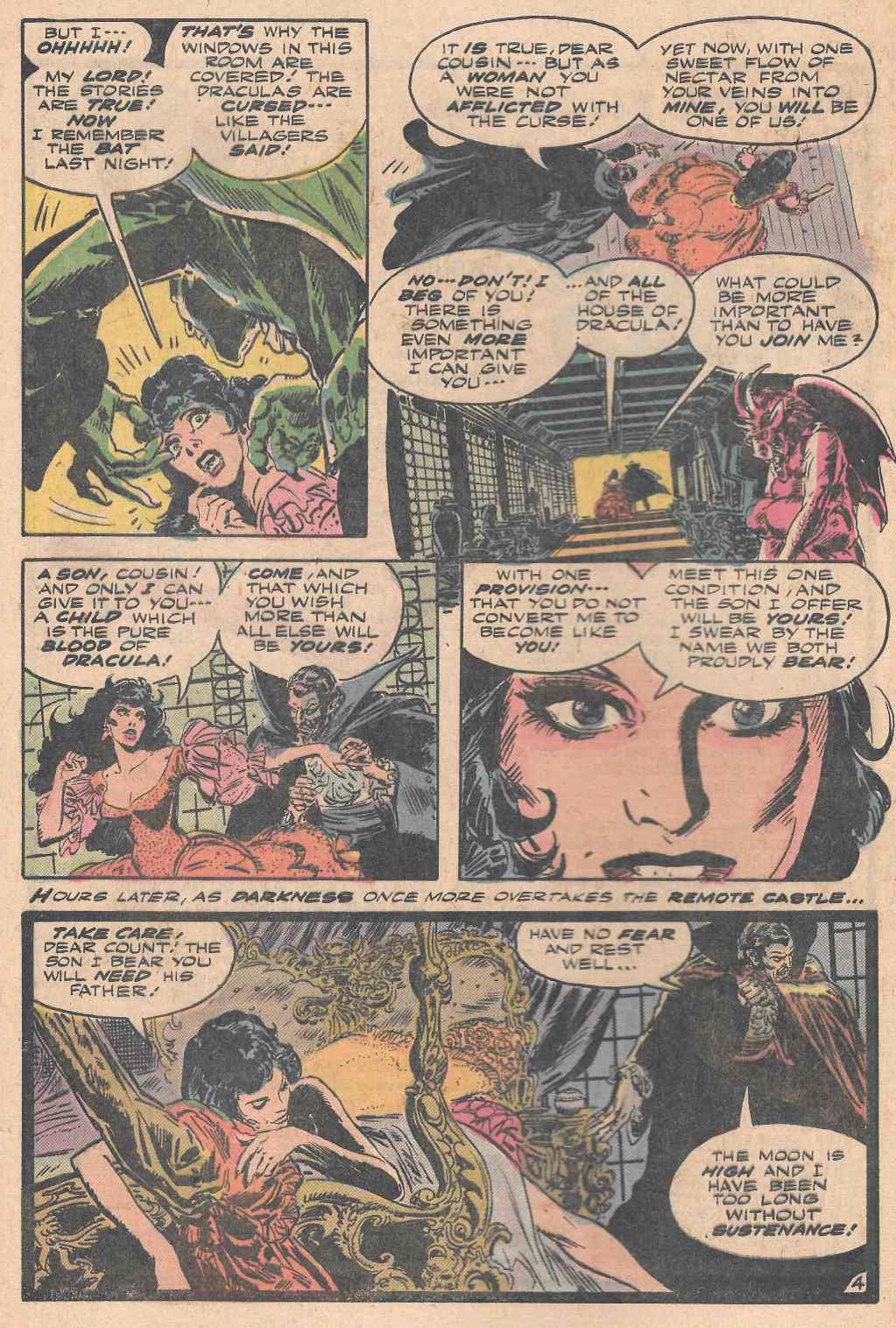 All is well for nine months, and true to her word (somehow) the woman provides a baby boy. Buuut…she decides not to let Dracula have the infant and he ends up sucking her dry and beginning the process of turning her into a vampire anyway. 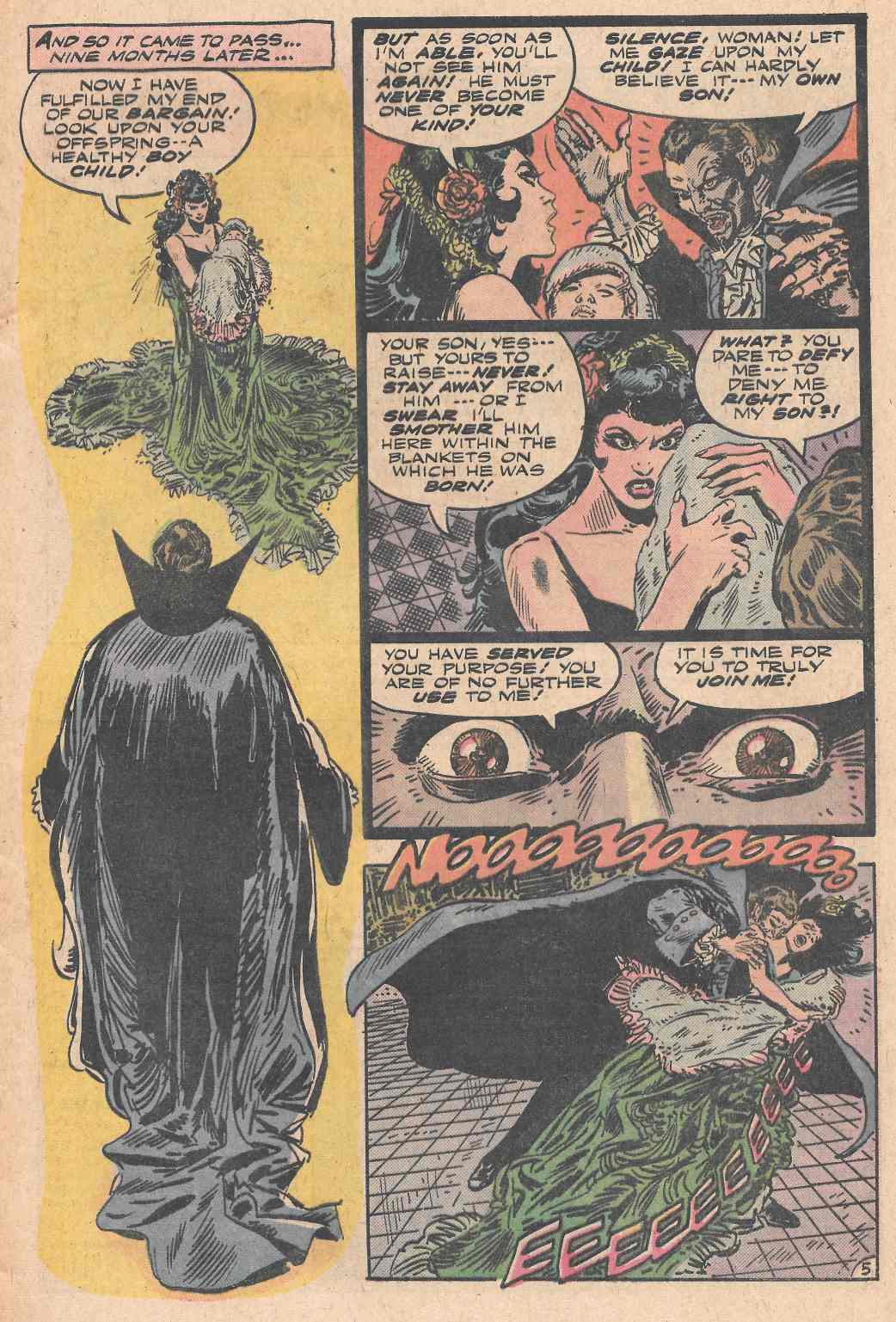 She’s pretty wily though, and even though she is weak from being drained, she rushes the babe to a nearby harbor and entrusts his safety to a kindly woman. She even provides a charm to go around his neck that will keep him from becoming a vampire like his father. Dracula catches her just as the infant is borne away. 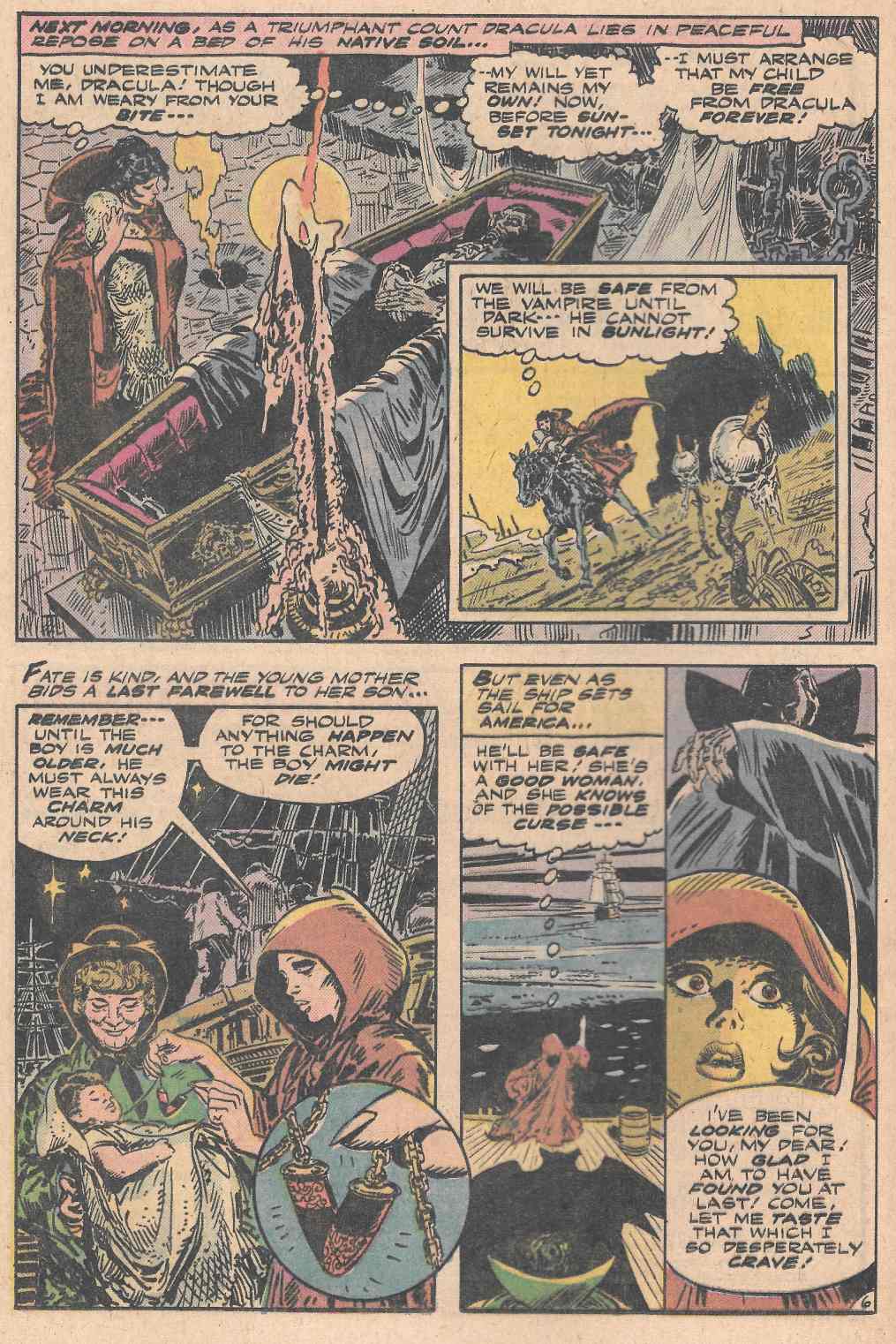 And he’s just a little frustrated at finding out she’s sent the child off. Before he can transform her any further, she impales herself on a floor spike (OSHA wasn’t around back then, that thing looks dangerous). Dracula vows to hunt for his son forever. 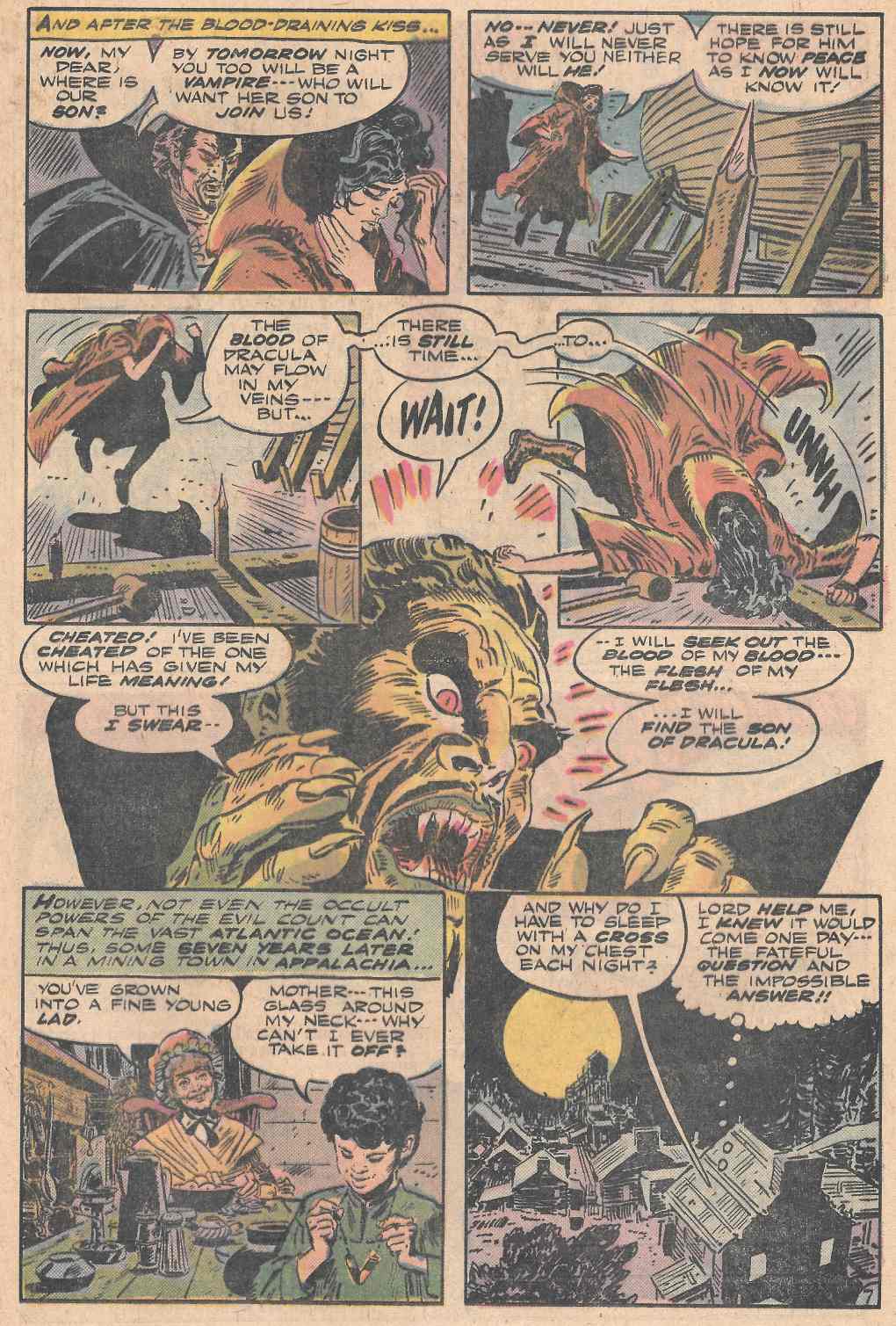 And we turn to his son having grown to childhood age. He lives in a small village and has some weird habits enforced by his kind but freaky mother. Strangest of all he has to sleep with a cross on his chest. Even he wants to know what that’s all about.

The answer comes in a knock on the door as Dracula has finally tracked him down. His adoptive mother forces the vampire back out into the night even as Dracula vows revenge against her. 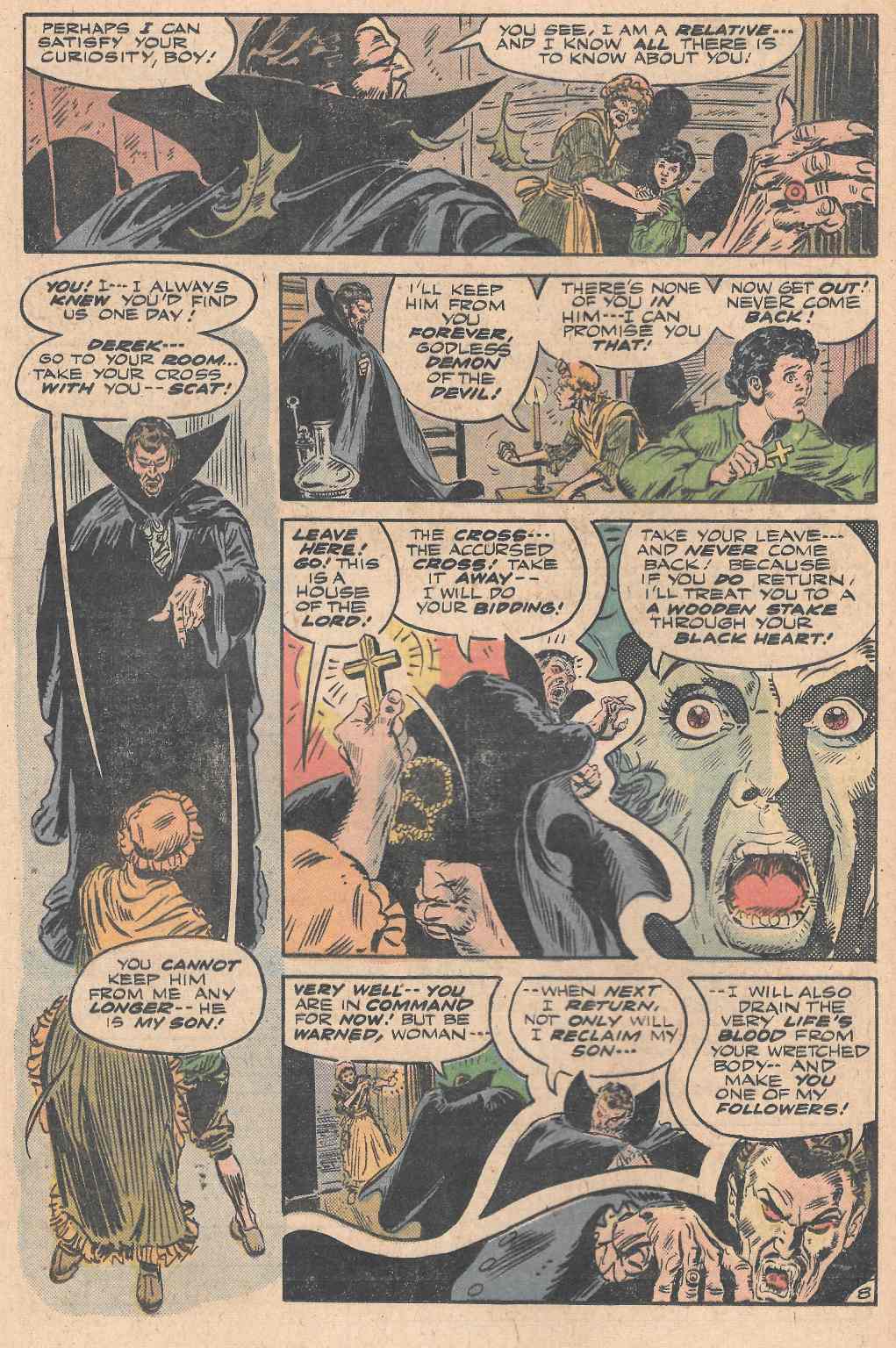 I suppose you know what the woman’s going to do now, right? Flee. That’s what most of us would do. But no. Instead she forces the kid into a hidden wine cellar where she leaves him asleep alongside a book explaining his vampire-ness. Then she kisses him goodbye and takes a keg of gunpower… 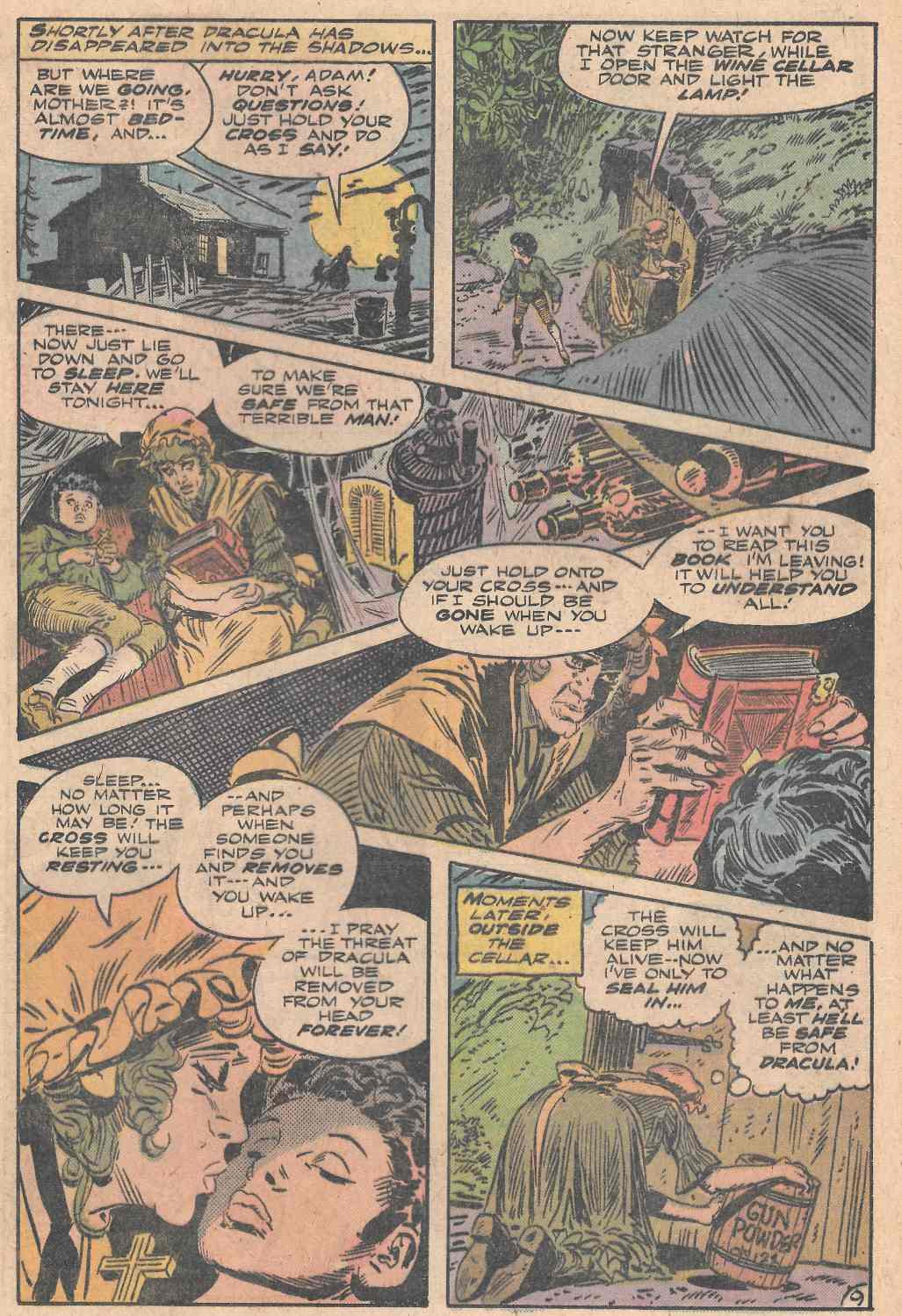 …and blows up the entrance, killing herself and trapping the kid in cave for several centuries. Personally, I would have fled. 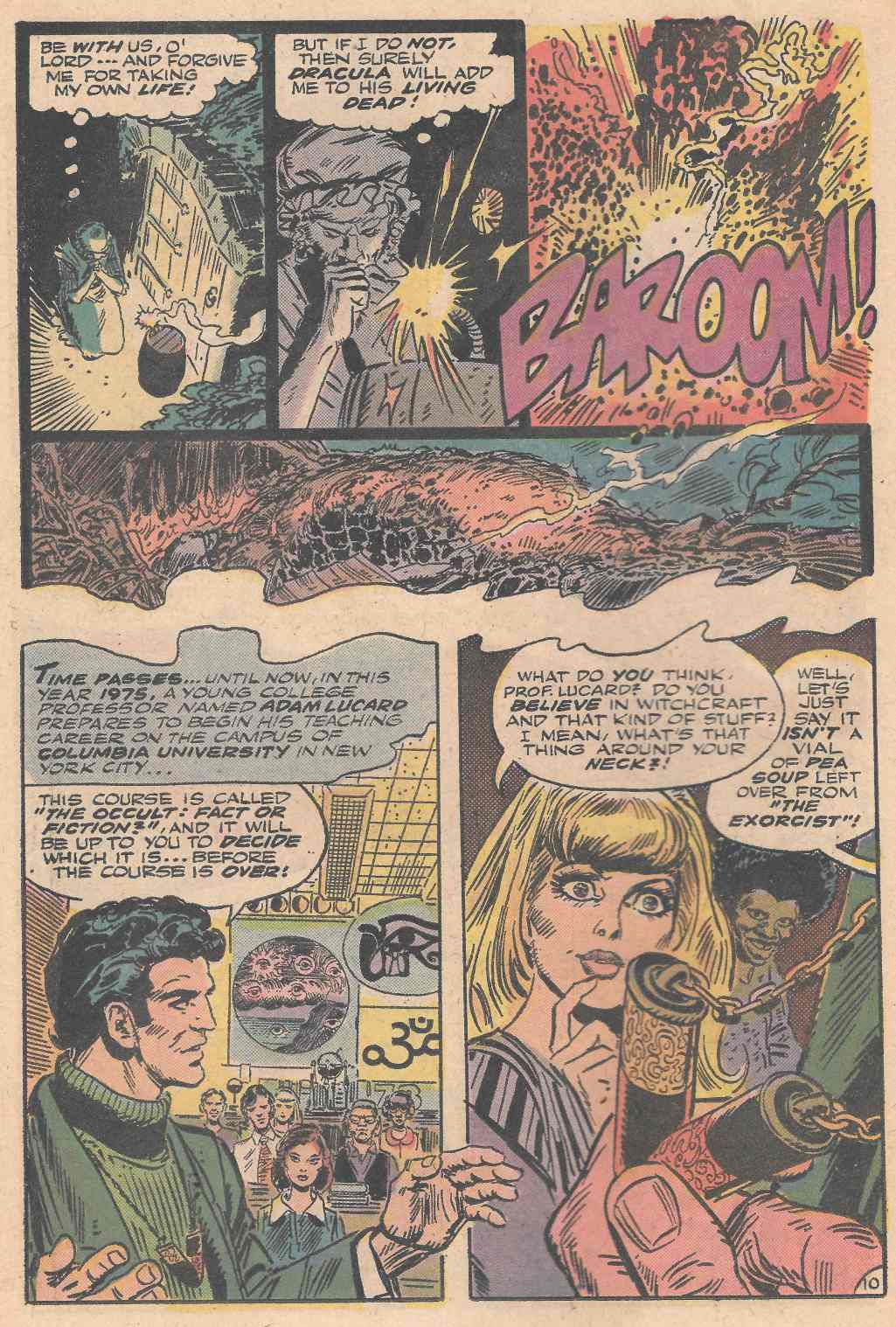 What emerges from the cave finds its way to becoming Adam Lucard (get it?) and working as a college professor for Columbia University in New York. His field? The occult.

He’s the campus hotty, as this blonde chasing him around could attest. She claims to be a witch to see if that gets her an invite to his pad, but Adam knows he can’t see anyone. Not with the odd sleep habits he has to keep as…(wait three beats)…the Son of Dracula. (cue lightning/thunder effect) 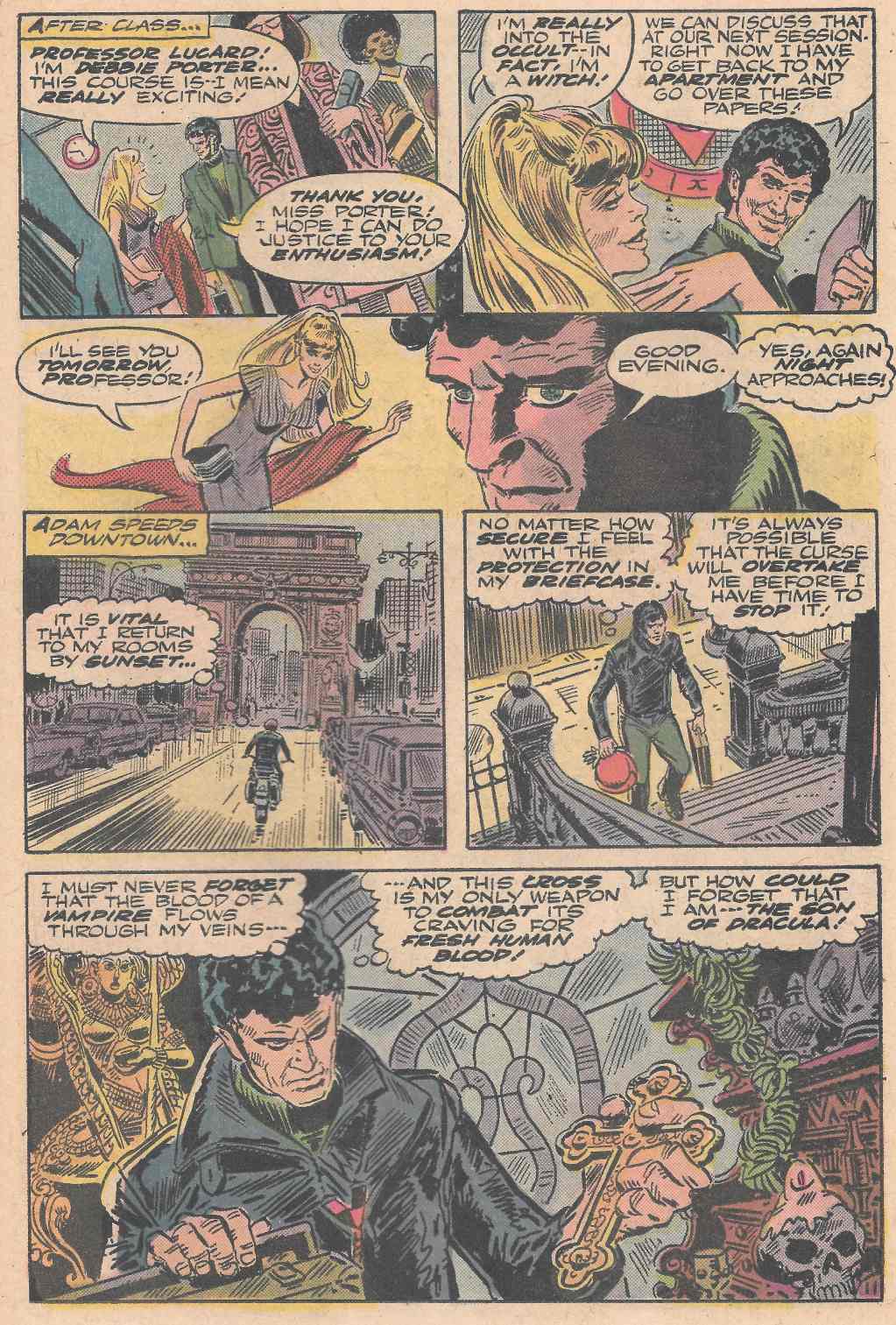 But while Adam gets ready for beddy-bye, the blonde is breaking into his apartment. Give it up, lady! He’s gay! 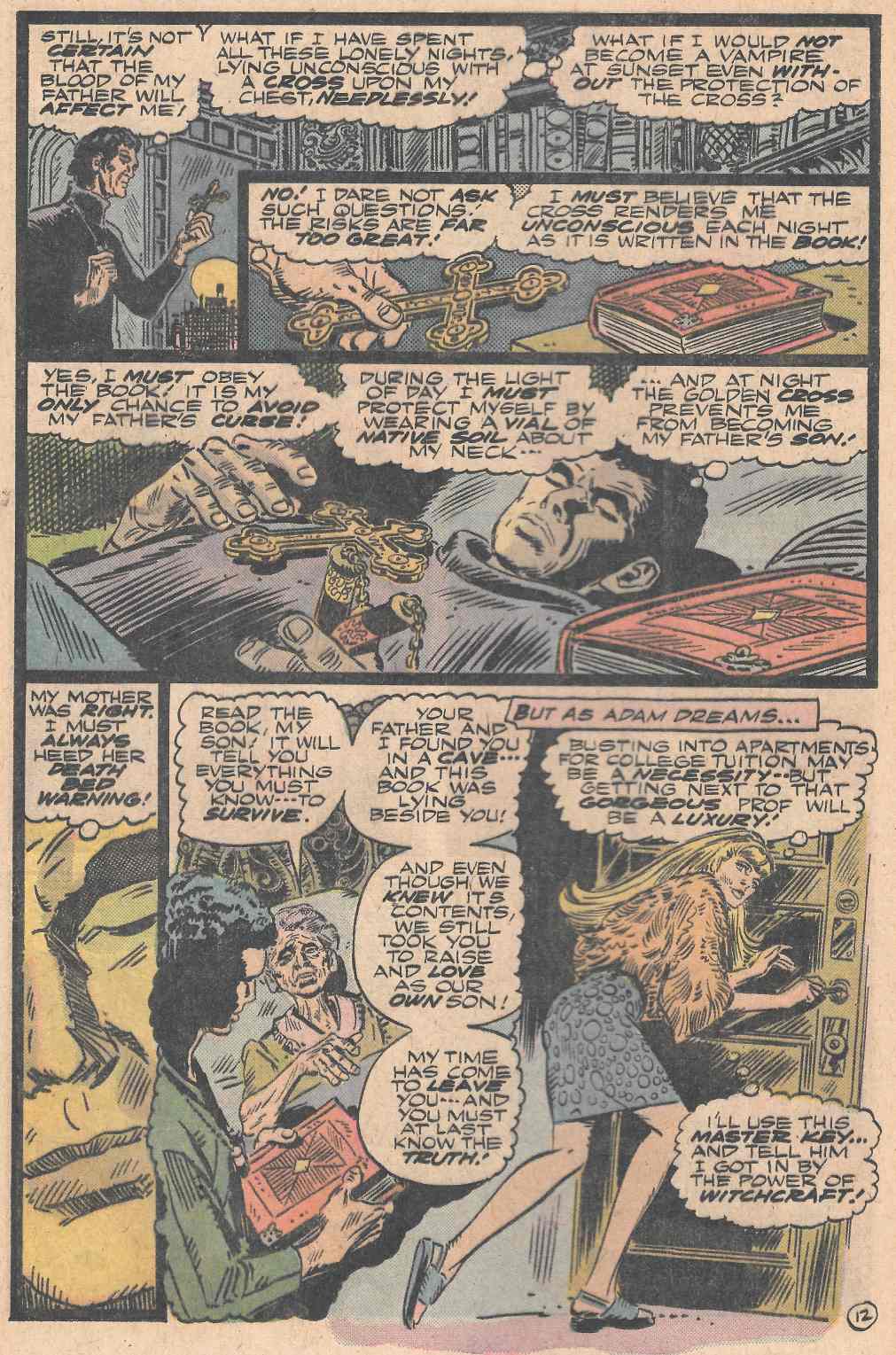 Her internal monologue shows the she’s a common thief, but she really thinks the professor is a hottie. She goes to give him a kiss, but gets rid of his necessary religious iconography. That is a mistake. 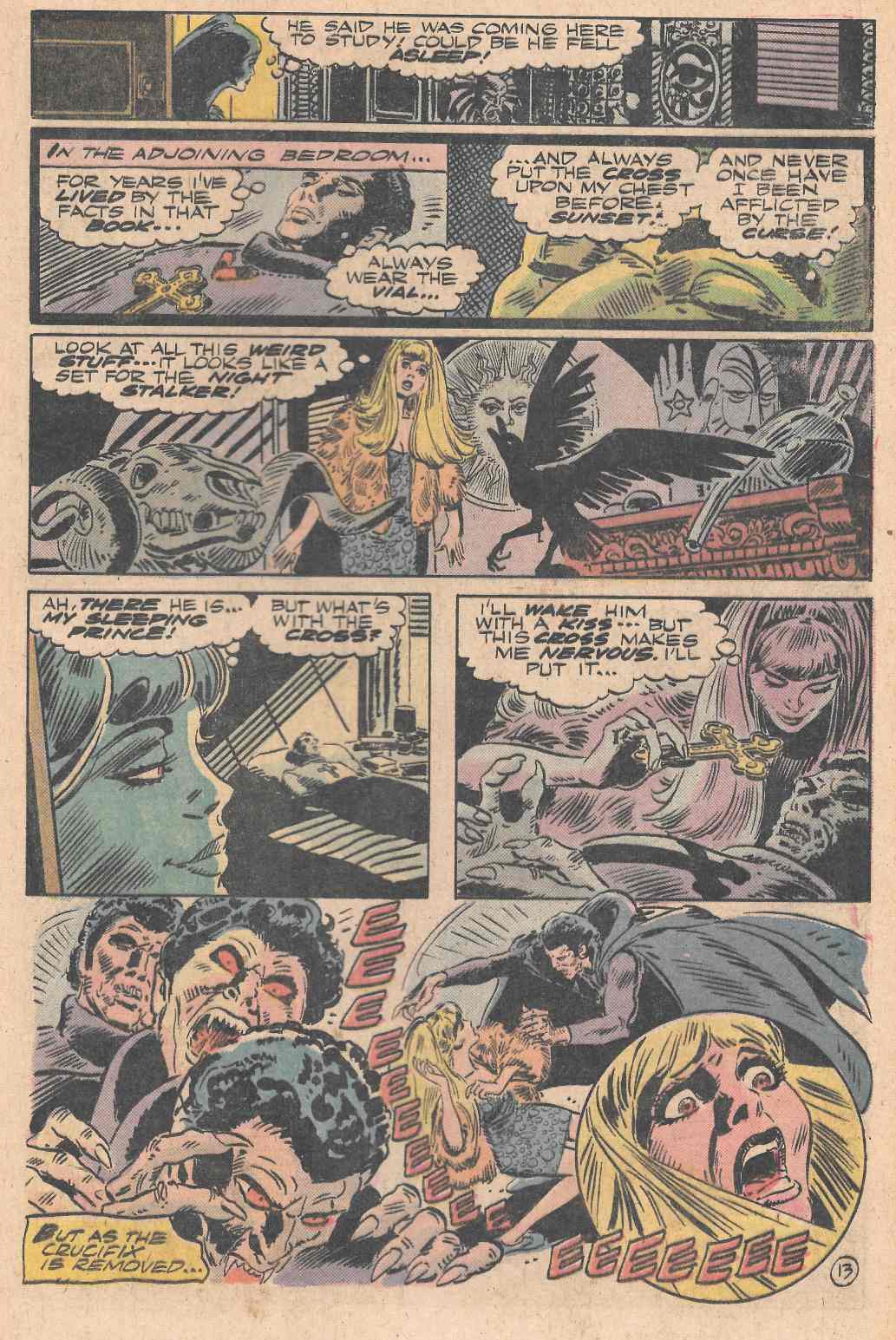 Adam gives her a kiss in return. One on the neck that drains her completely of blood. Then he turns into a bat and goes off seeking other prey… 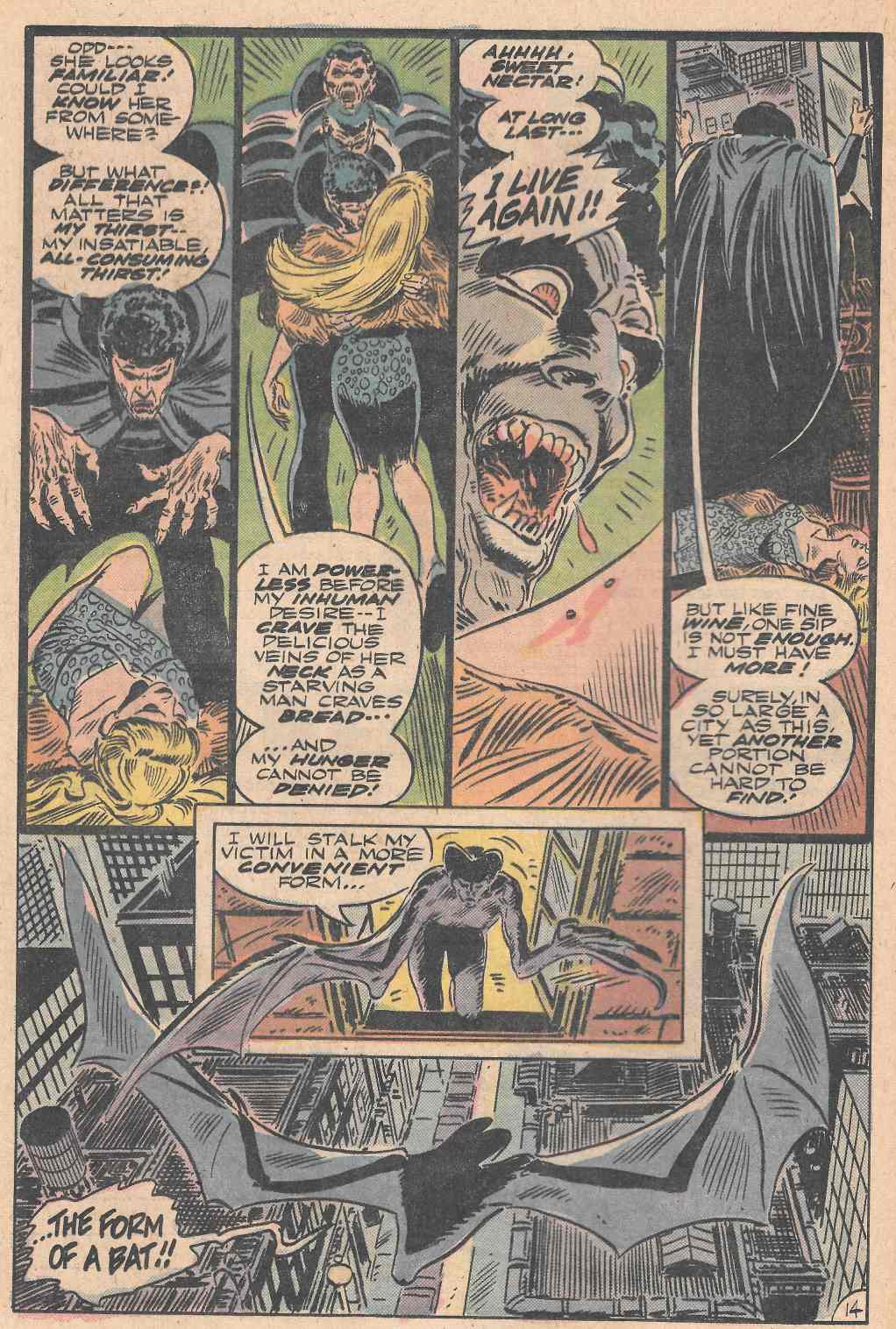 …when who should he encounter, but Debbie's (the blonde’s) friend who helps her “pull jobs” (i.e. steal things, thus meaning she is of low moral character and you don’t have to feel bad if she dies or anything). He gives her a bite and eternal life, which means that she’s a vampire now too, I suppose. 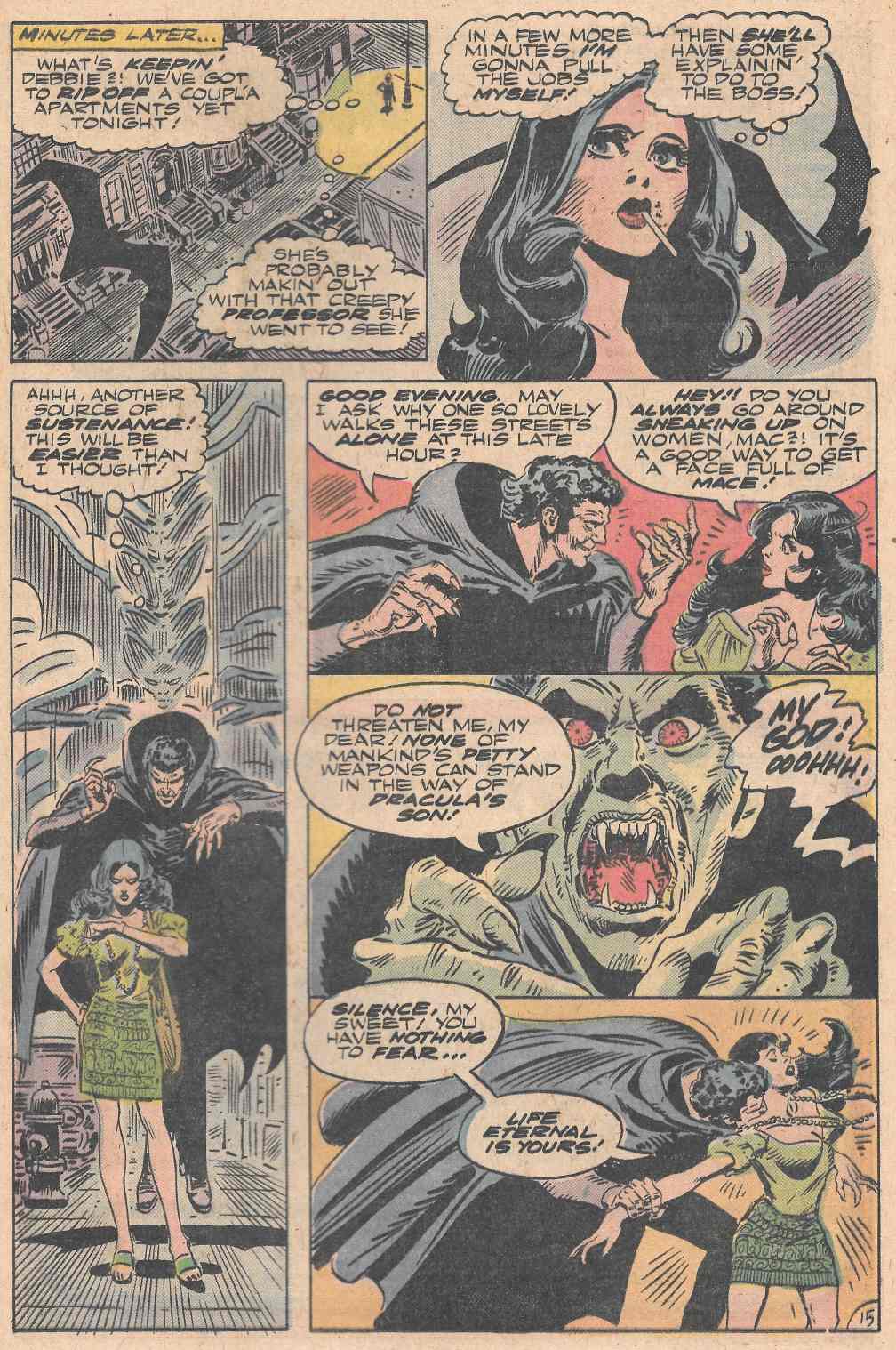 But he’s not fast enough and a passing police cruiser almost catches him. They do rescue the body of the girl, who now may be a vampire. Unsure at this point. 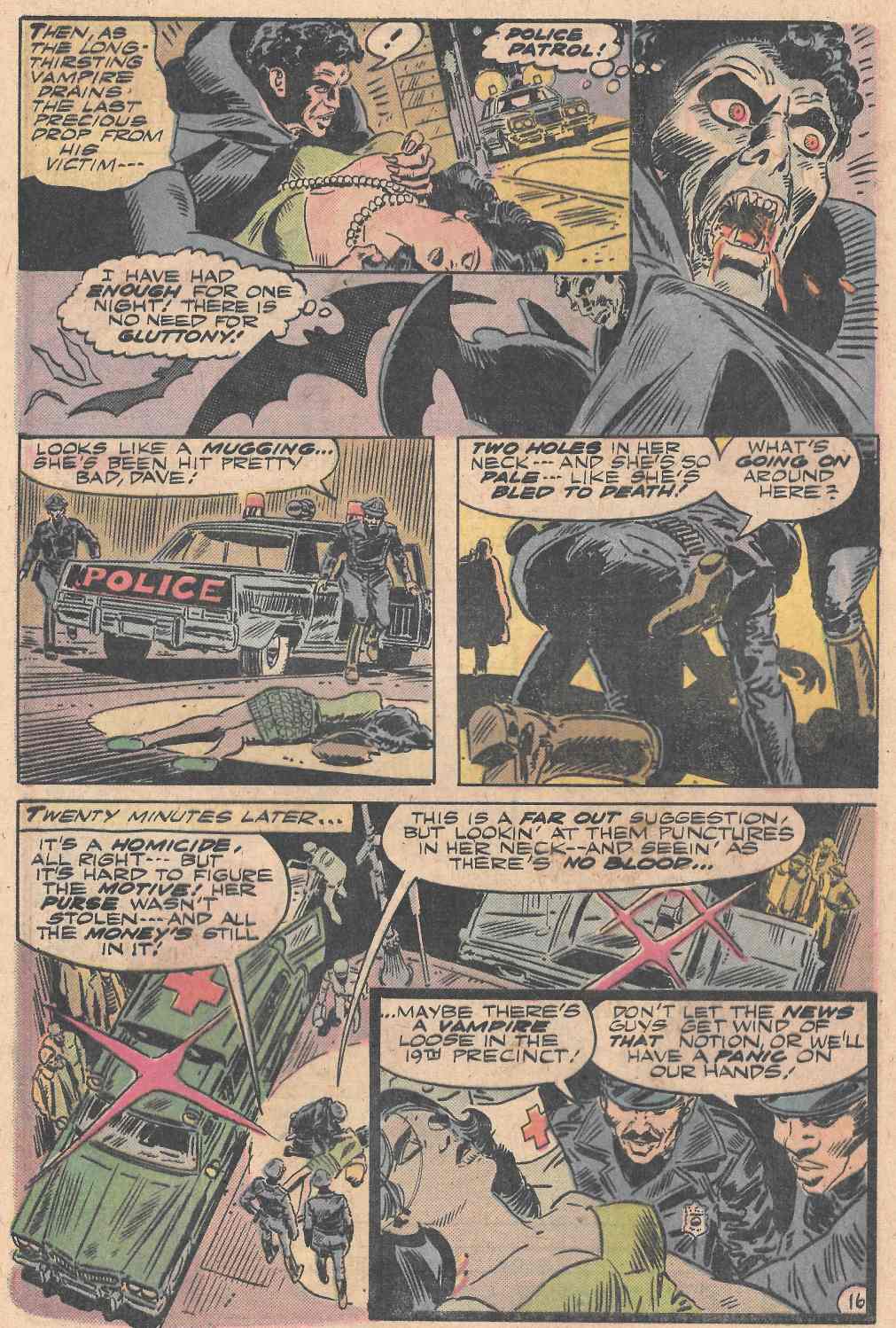 And when the morning comes, Adam awakes like a blackout drunk. He has no idea what happened, but there is the body of a dead student in his bedroom drained of blood. Seems like the plot of The Hangover part IV. 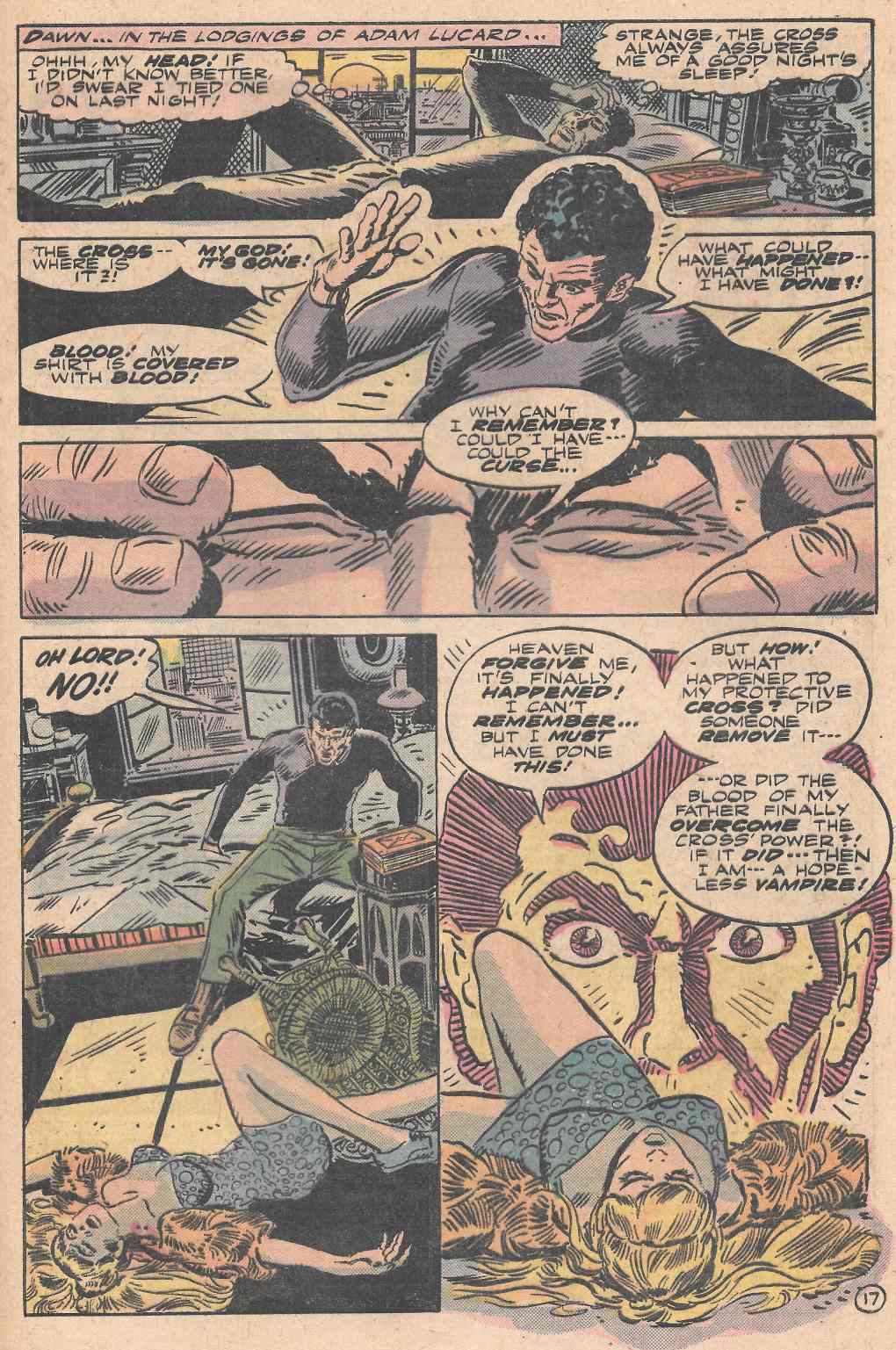 Knowing she will come back as the undead if he does nothing, Adam stakes her. And while that ends her unlife, it certainly does nothing to stop her brunette friend that he doesn’t remember biting. However Adam commits himself more fully to being a good person and to fighting to end his curse of vampirism, for the good of all mankind. 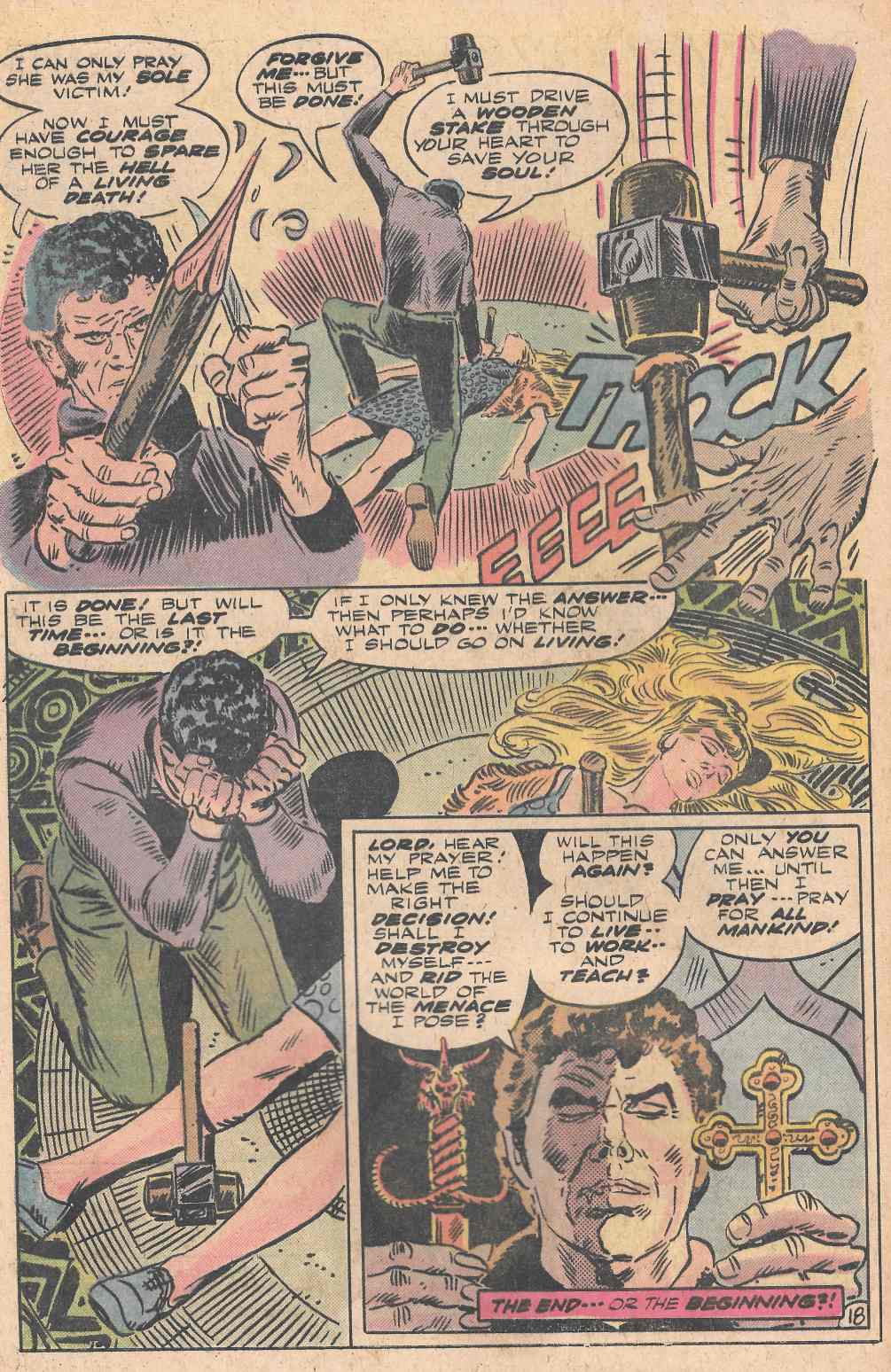 I’ll answer that final question: it is the end. This was a one and done, no others of these were made. I dug the vibe of this as far as art and while the story kept me guessing, I have no clue what the plan was for Adam, the brunette or his Dad. Certainly there are lots of things to work with here, but I was never a fan of the “Eclipso” type characters.

As one Son of… to another though I’d share a beer with Adam. Just not close to bedtime.

Posted by SonOfCthulhu at 1:31 AM