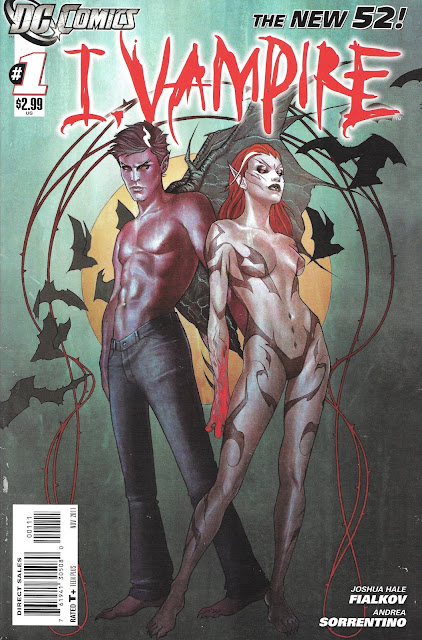 Not feeling this weak-sauce good vs evil vampire tale

Perhaps this comes as a result of reading Ragman #1(2017) so close to this book, which appeared 6 years prior. Just seems like the same framing devices used to slightly different ends, with an ending cliffhanger, and much the same level of moody art style. Almost like Ragman copied its tone and structure out of this book.

And of the two, I think Ragman does a better job with it.

However, what do I know. At the time of its release, this book garnered much critical acclaim. My one man’s view might be a little biased.

It does seem that this follows J.M. DeMatteis and Tom Sutton’s ideas about the title character. Andrew Bennett receives the bite of the undead back in the 15th century. He immediately turns his lover Mary Seward into a vampire too. But while Bennett becomes a goodly aligned blood-sucker, Mary takes a much darker turn. She styles herself Mary, Queen of Blood and amasses a vampire army called the Blood Red Moon in a bid to take over the world.

Bennett sees his mission is to oppose her. He takes a vow of never biting a human, finding sustenance in the blood of animals and bottles stolen from blood banks/hospitals. He takes on human companions to aid him in this quest, leading to complications.

In all this is a solid story setup, but I don’t feel that the New 52 does it justice. It could be the slow and plodding pace that most of this age of comic book stories tend to take. Like this issue, for an example. We begin with Bennett, now looking less like a dapper gentleman vampire and more like a 20’s something college dropout, moving around a pile of vampires found sleeping in a tenement building. While he is doing so, his mind replays his final conversation with Mary, Queen of Blood, from several…well, we don’t really know how long ago. 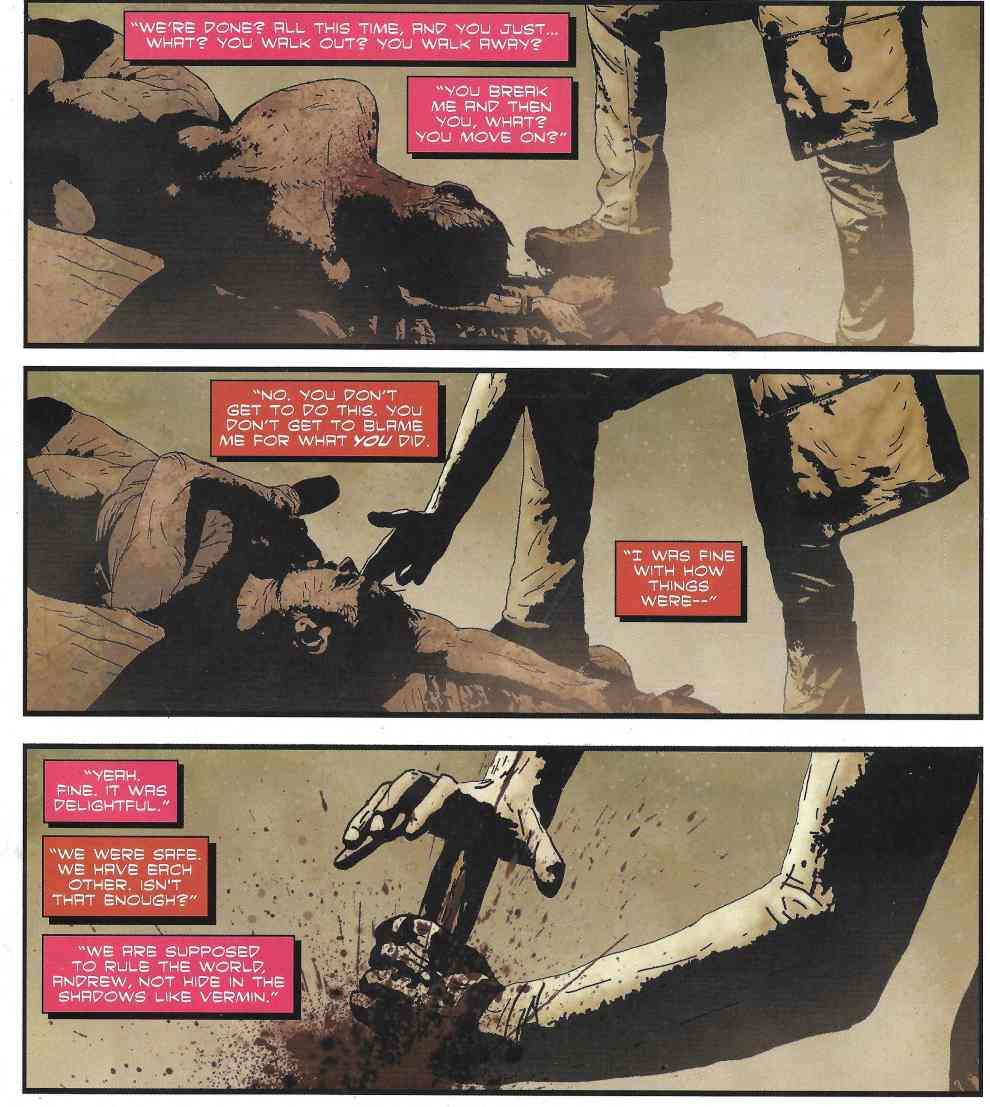 Note that each undead he finds, he stakes. He even apologies for killing them, telling them he’d usually find the vampire that made them and stake HIM/HER which would free them…but he doesn’t have time. So instead, it’s stake and chop… 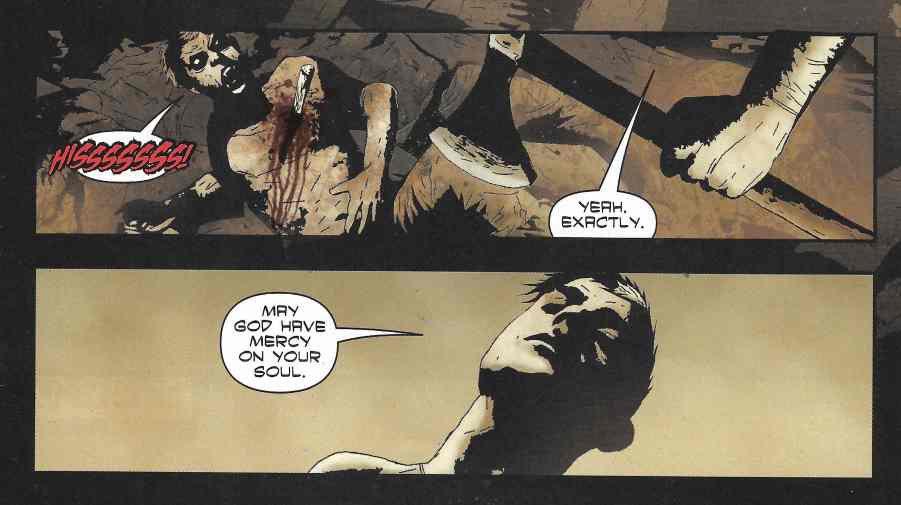 …chop! The art has the right tone for this, and I admit to liking parts of this sequence very much. If only we didn’t have to do this flashback in parts crap again to unfold the story. 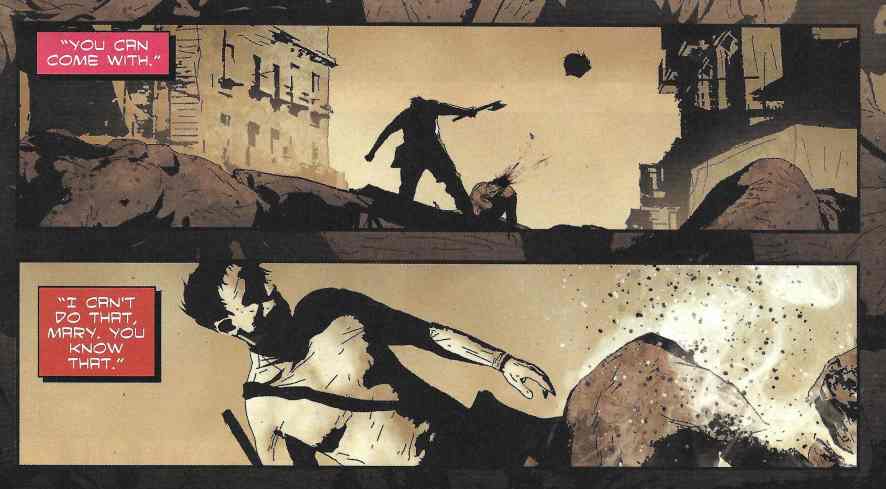 Oh, by the way? It’s time for that flashback. 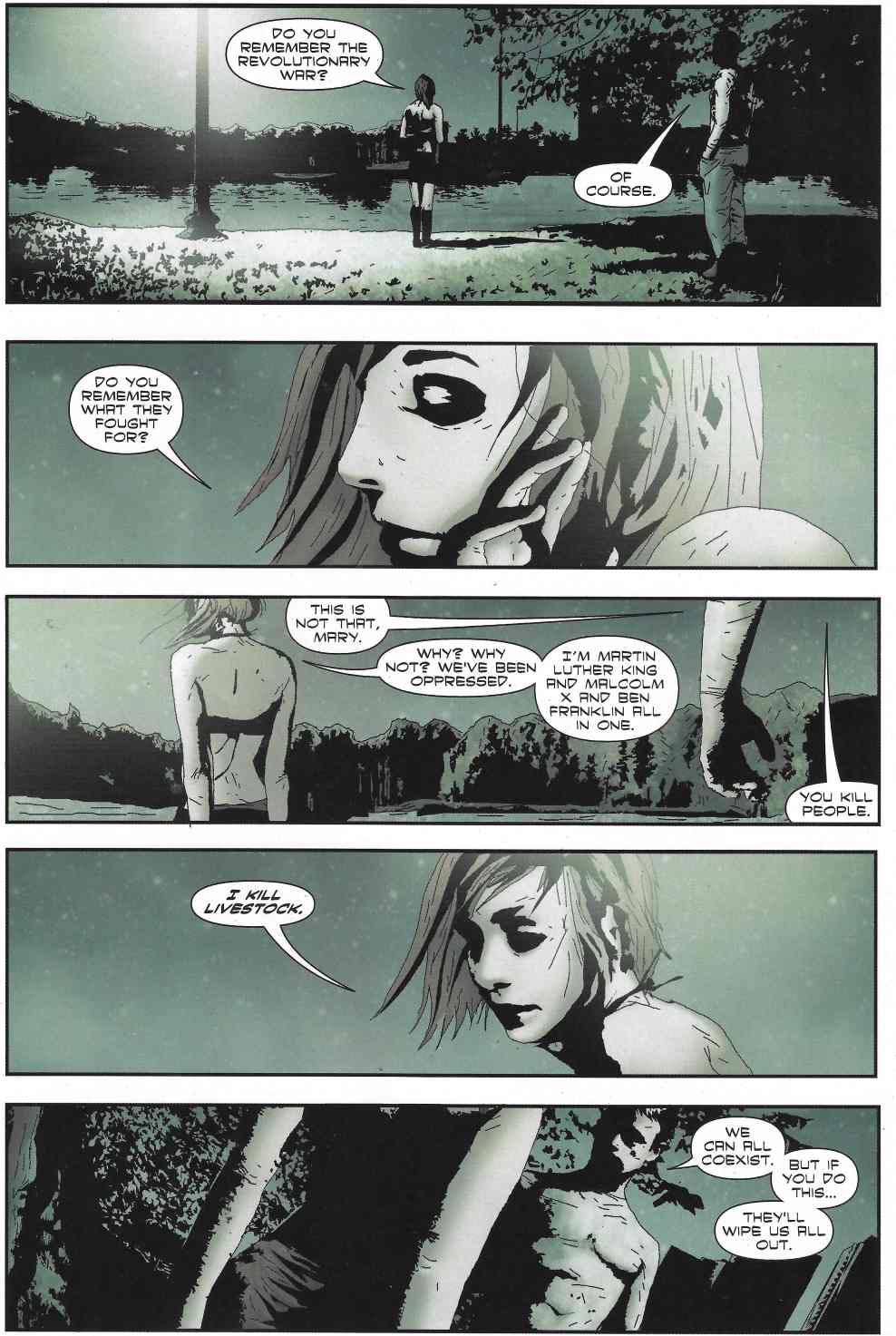 This is Mary, who is a waifish, androgynous-looking young girl. The hard part of this sequence is realizing that it is the past and that this is Andrew she's talking to and why this is important. I usually don’t like blatant labeled descriptors, but here they are more than needed. Maybe next time just tell the story sequentially and there won’t be an issue? 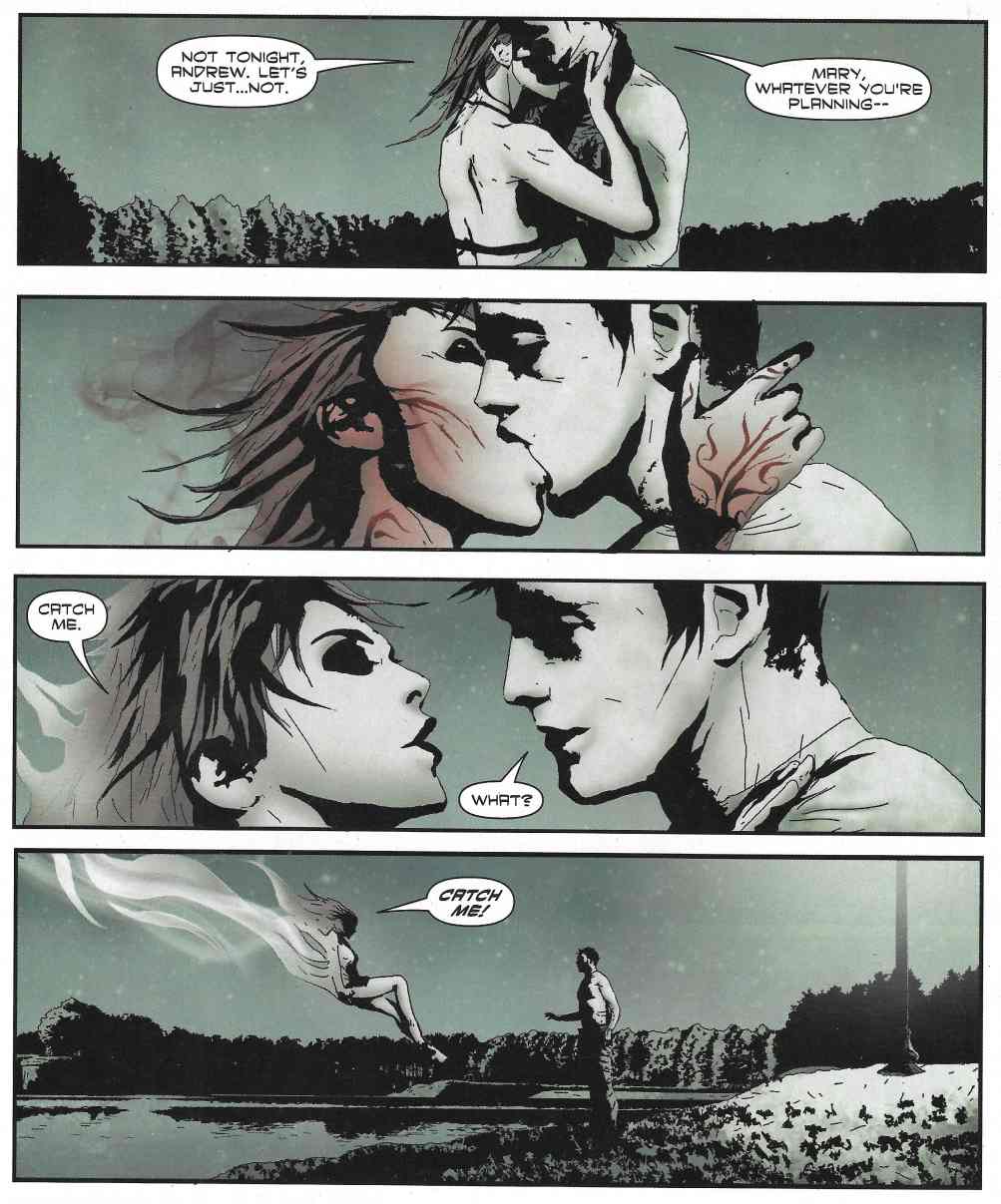 Anyway, this was the past and Mary asks Andrew to “catch her” which is kind of like asking for him to stop her plans. The scene works, but the context is muddled because where are we now in the story? 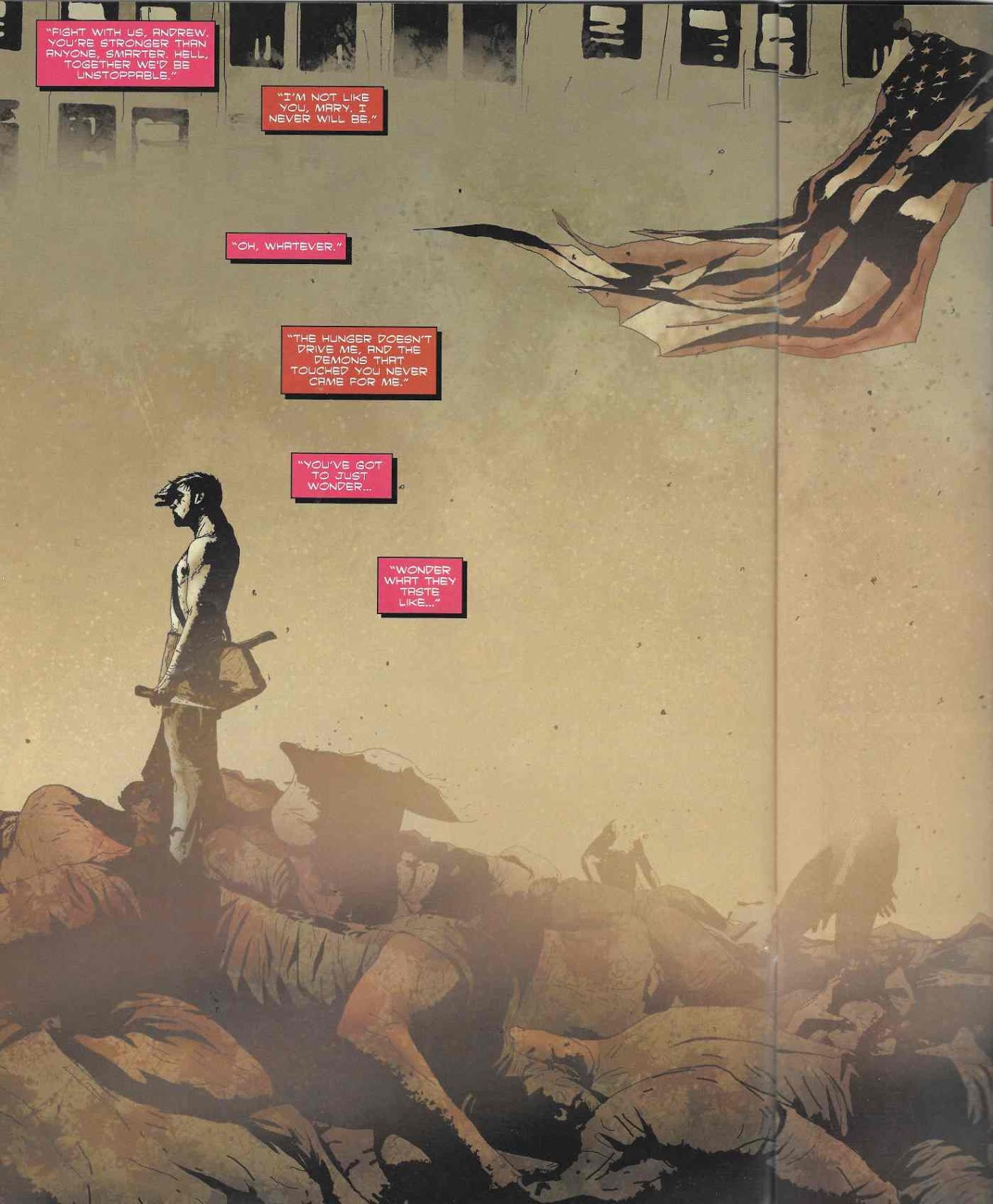 Oh, right! Yeah. We are in the future in a warehouse staking bad vampires. 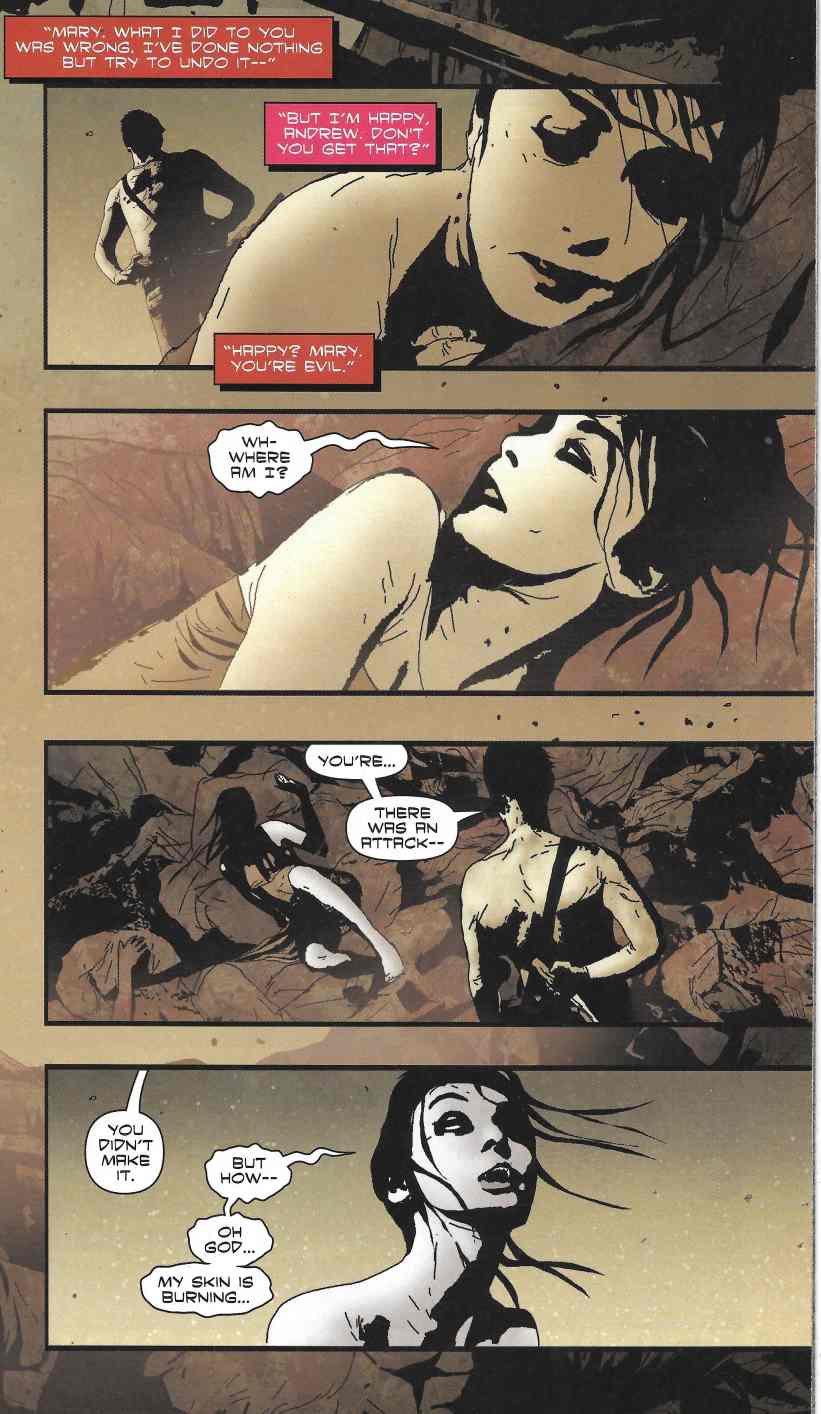 Or letting the sun get them. Whichever. Also, still thinking about Mary which is confusing the reader at first as to who this is in the vampire dogpile. 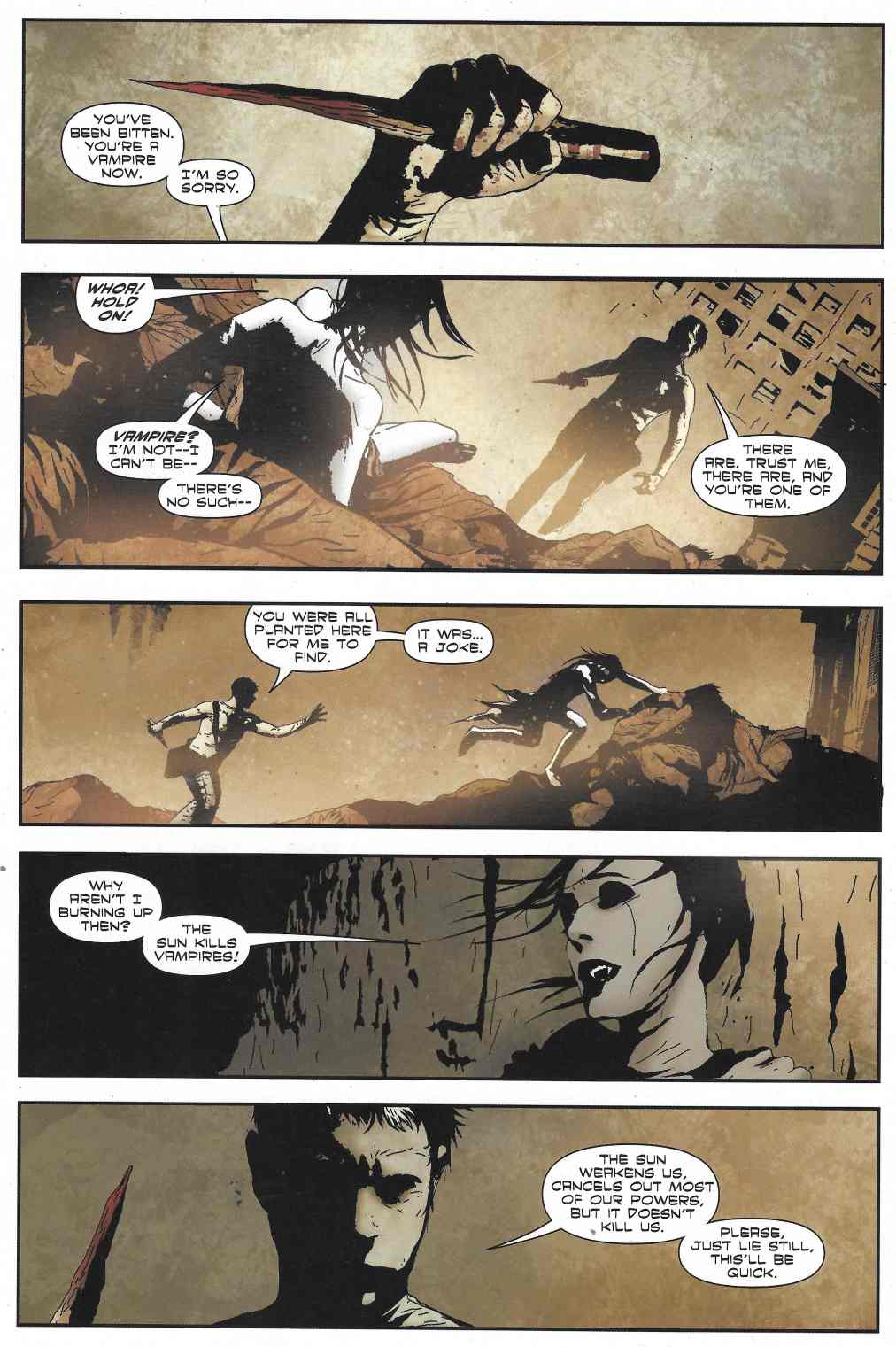 But the sun doesn’t “get them,” it just weakens them, as we find out from Andrew’s helpful bit of exposition. Also we learn that this pile of vamps was definitely planted here by Mary. But unlike what Andrew thinks, it’s not a joke. It’s a message. 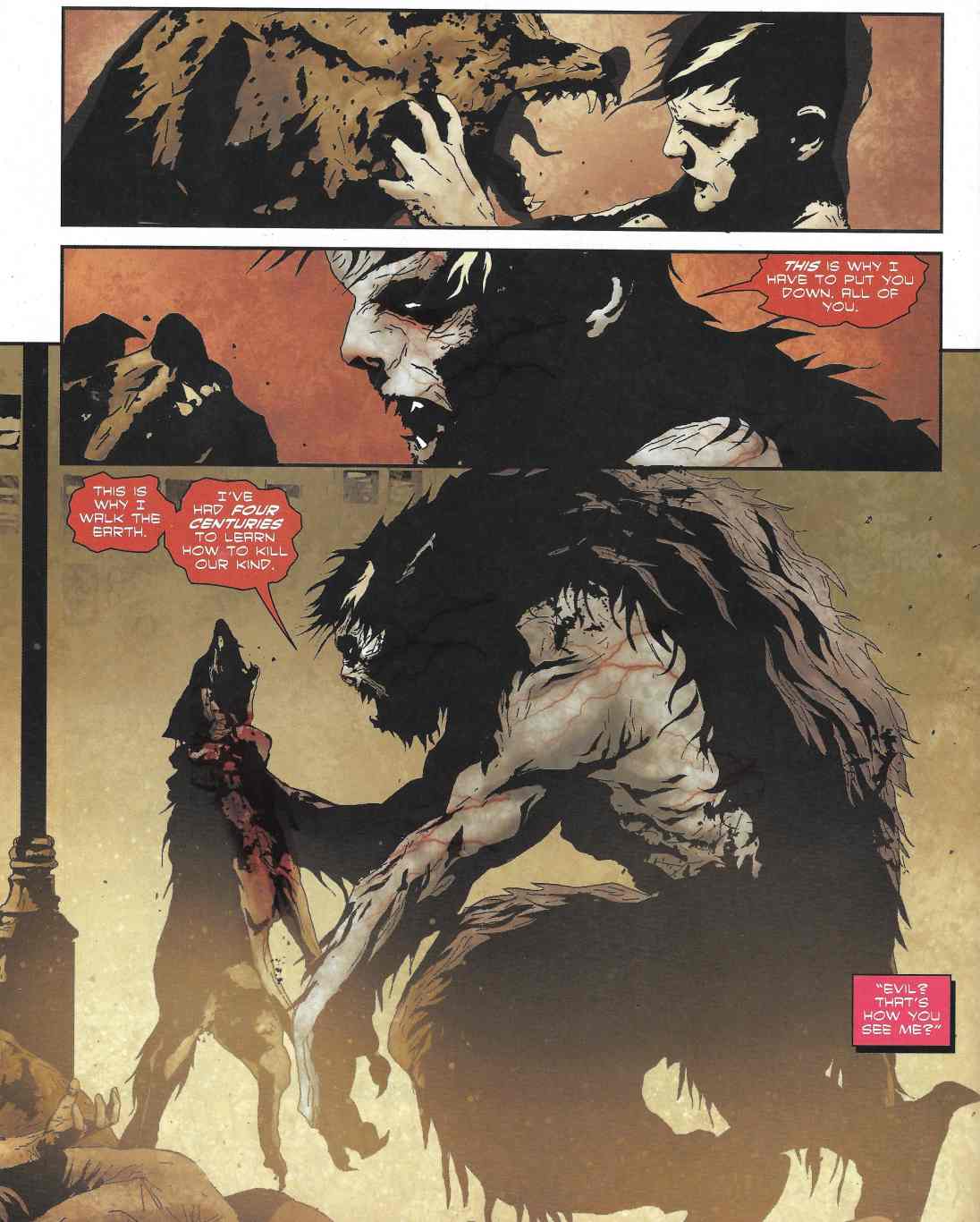 Even as the newbie vampiress tries to fight for her life with a quick metamorphosis into wolf form, Andrew shows that he’s much more adept at this shape changing stuff. 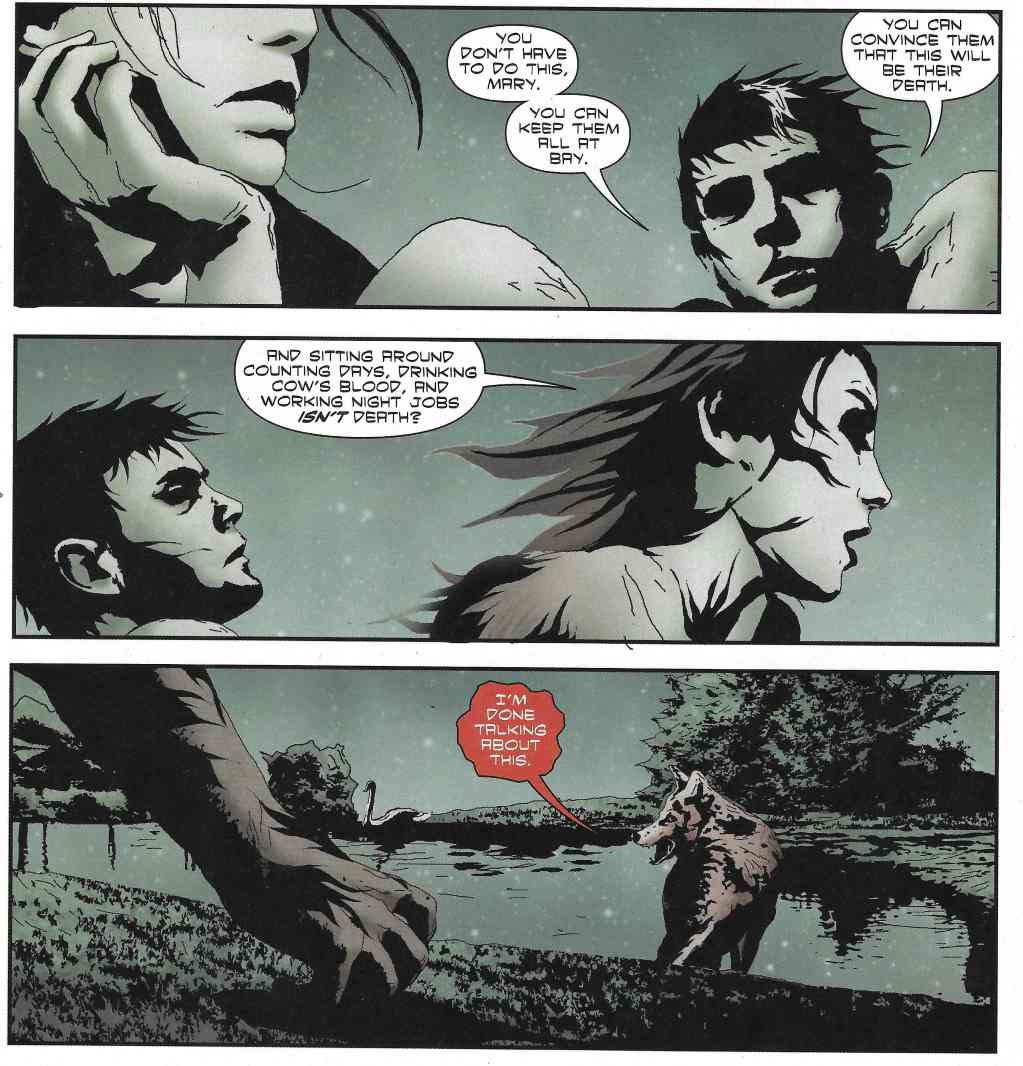 So, this is the moment that Mary turns once and for all toward evil. Or at least her word balloons turn evil. See the red reversed text! Evil! 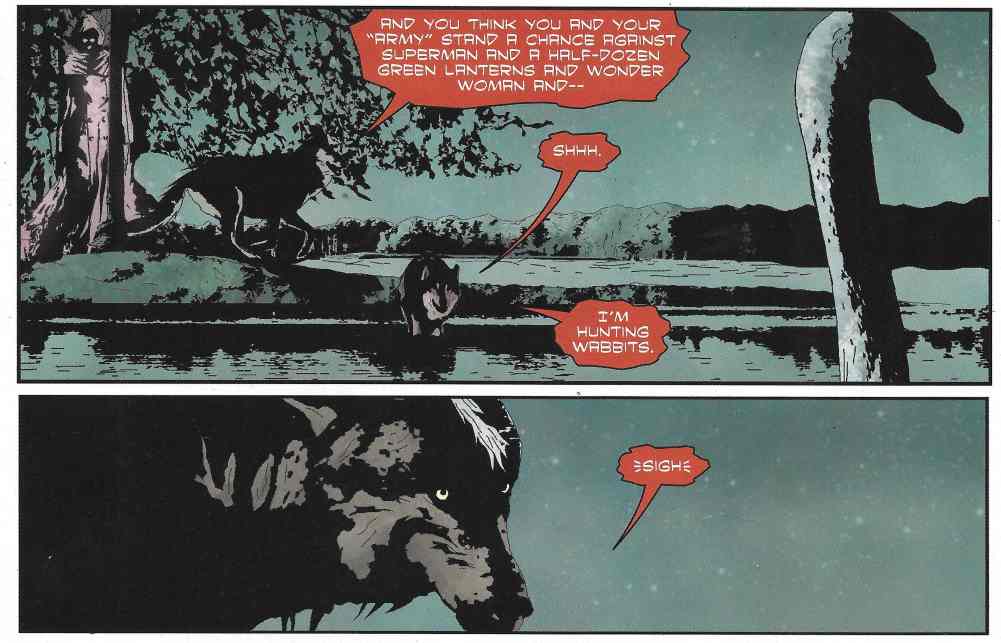 Or maybe it’s just a trick of the light, as Andrew’s become all red and messed up too. He makes a good point about the superhero community. They certainly would have a say in vampires sucking up the populace, no pun intended.

Back to the future again as the wolf-woman starts laughing at Andrew and we realize this is more of a setup than he thought. 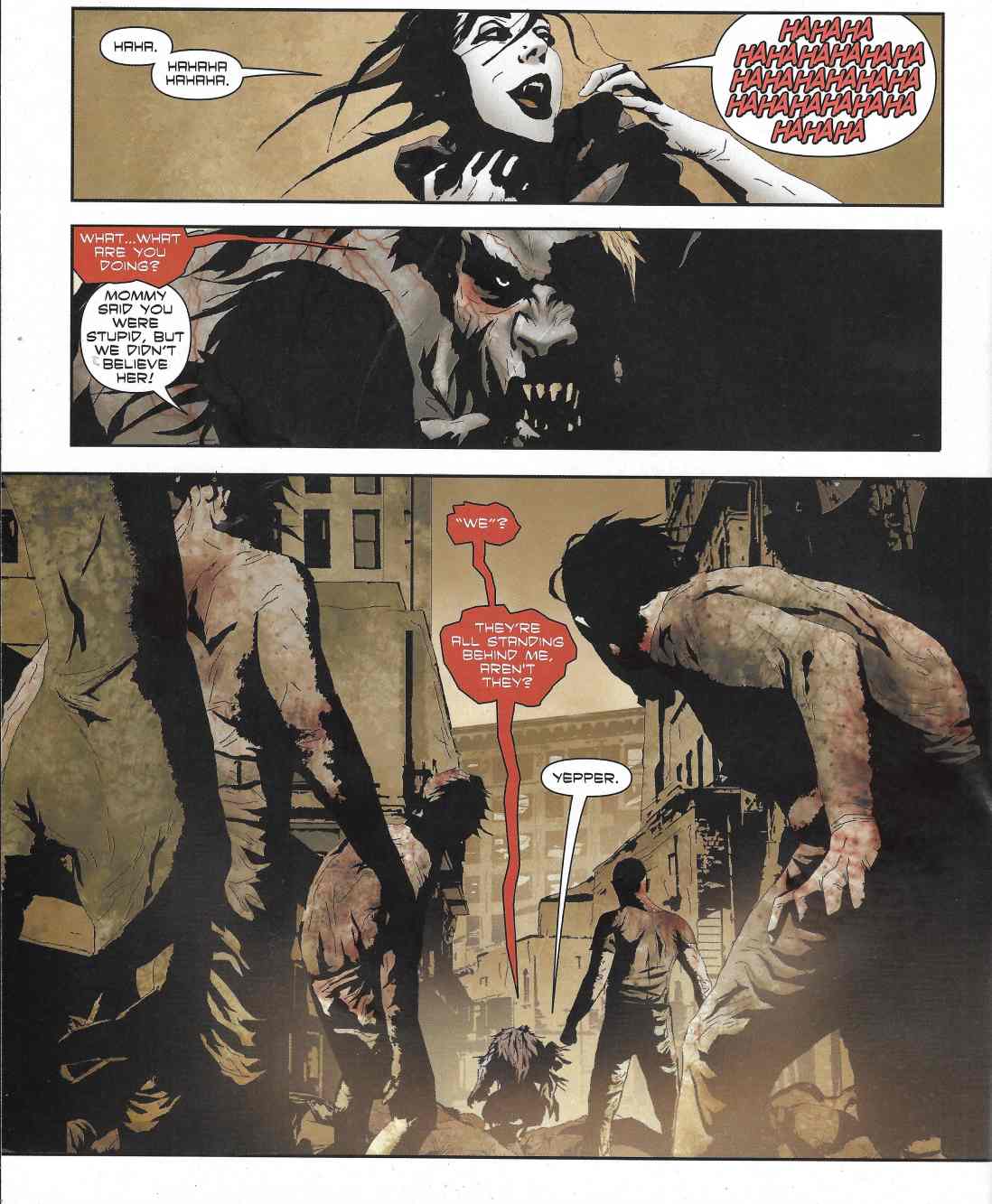 He faces a mound of full-blooded vampires now, all of them following the Queen of Blood’s lead. (actually quite a well done scene, however unbelievable the layout. Good job at creating a menacing background image.) 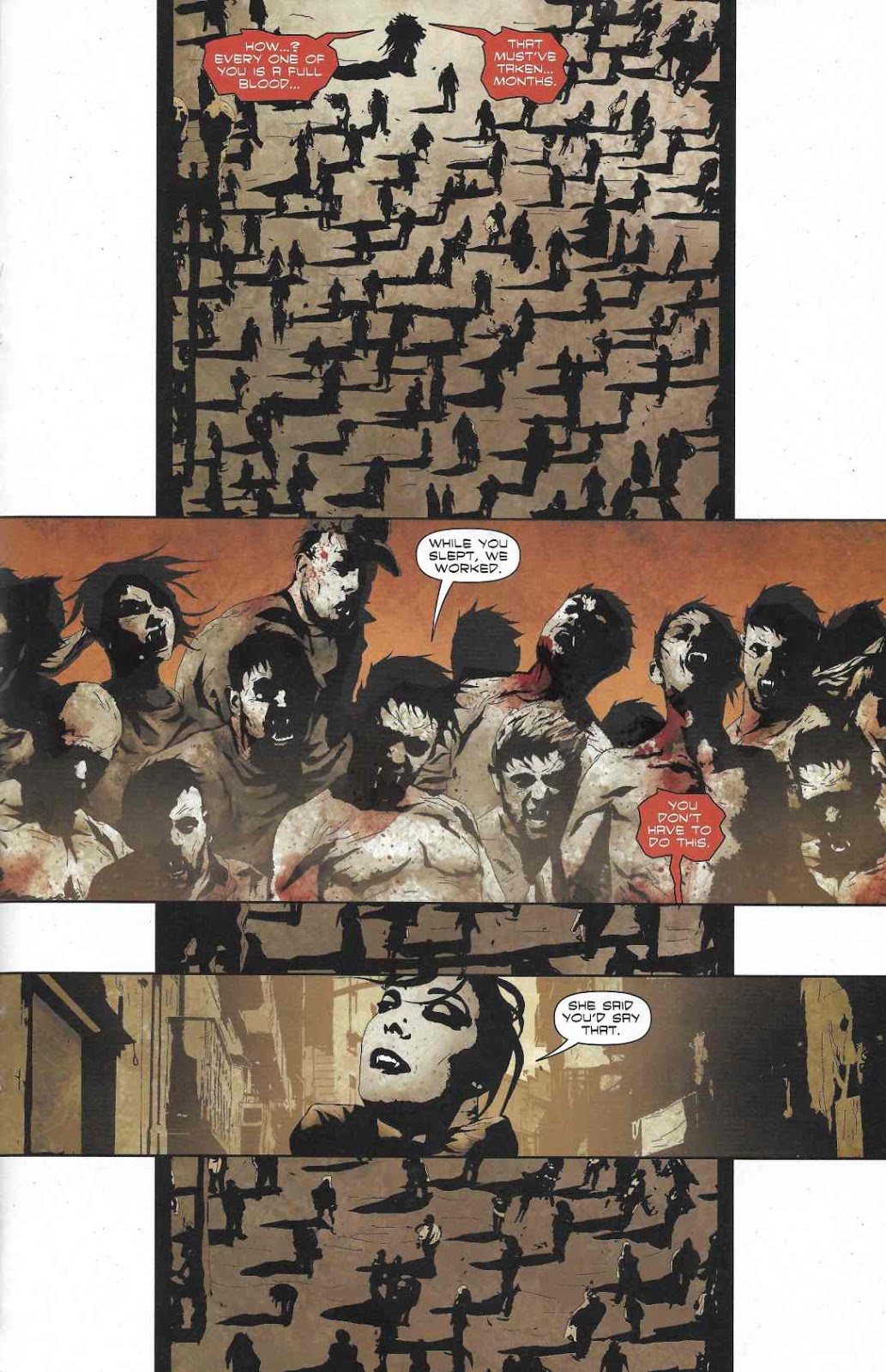 Bennett has to retreat, finding a local subway tunnel as his best option at the moment. 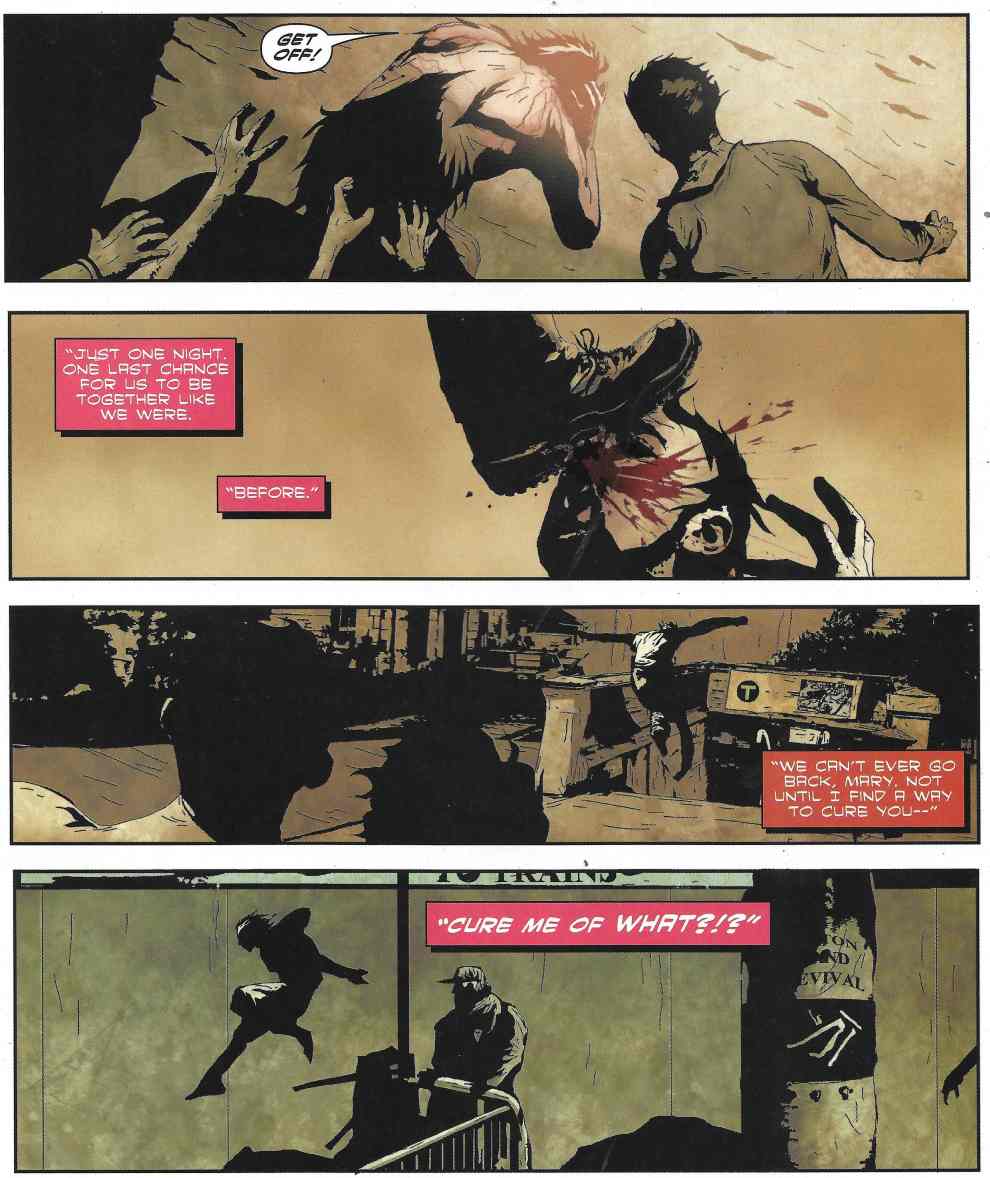 Which leads to a final flashback of Mary, taunting Bennett with her freedom and her decision to go against his wishes. It pains him so much to see her as she is that he cannot bear her when she morphs into her pre-vampire form. 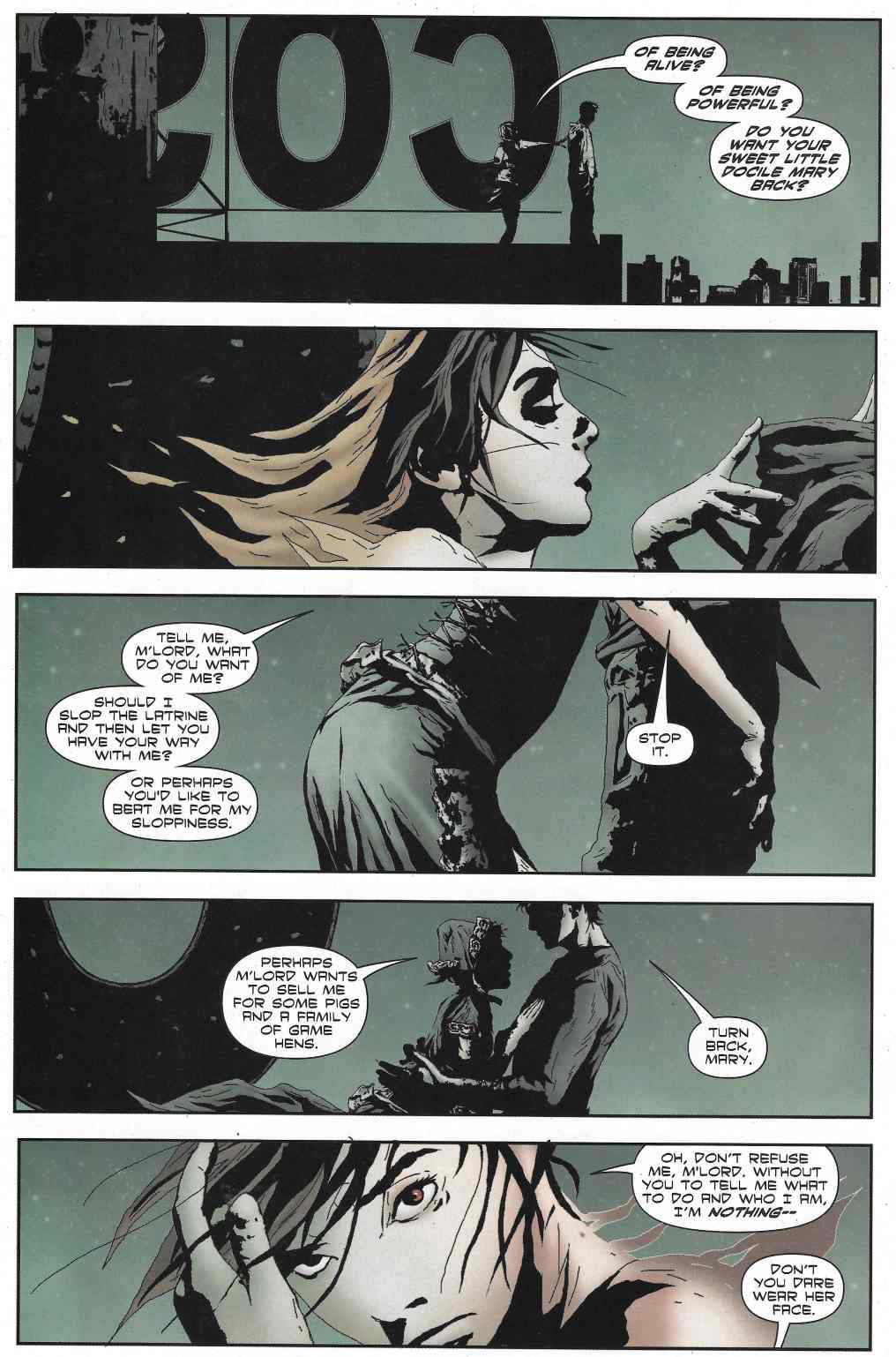 Which leads her to blow up. This is just female empowerment in a lot of ways…if female empowerment means enslaving the Earth by amassing a vampire army. Hmm…maybe it does? Anyway, Mary will be who she will be and she doesn't need a man to tell her how to live her...um, undeath. 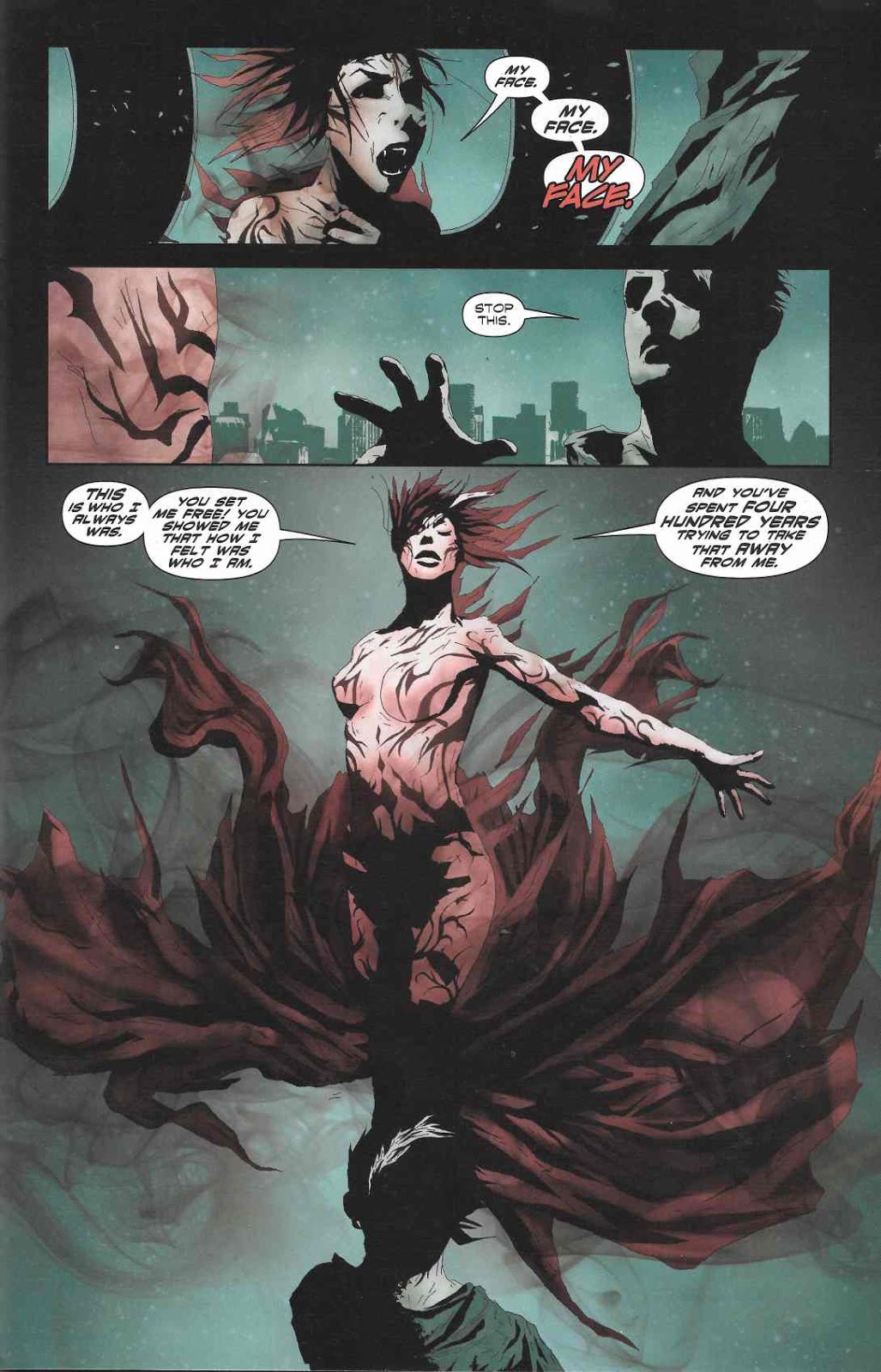 And from the personal conflict scene that it would have been nice to have a proper ending too and not just a drop of the cliff, we move back to Bennett and the million-vampire march having descended into the subway. Sadly, just as a train car packed with passengers arrives. 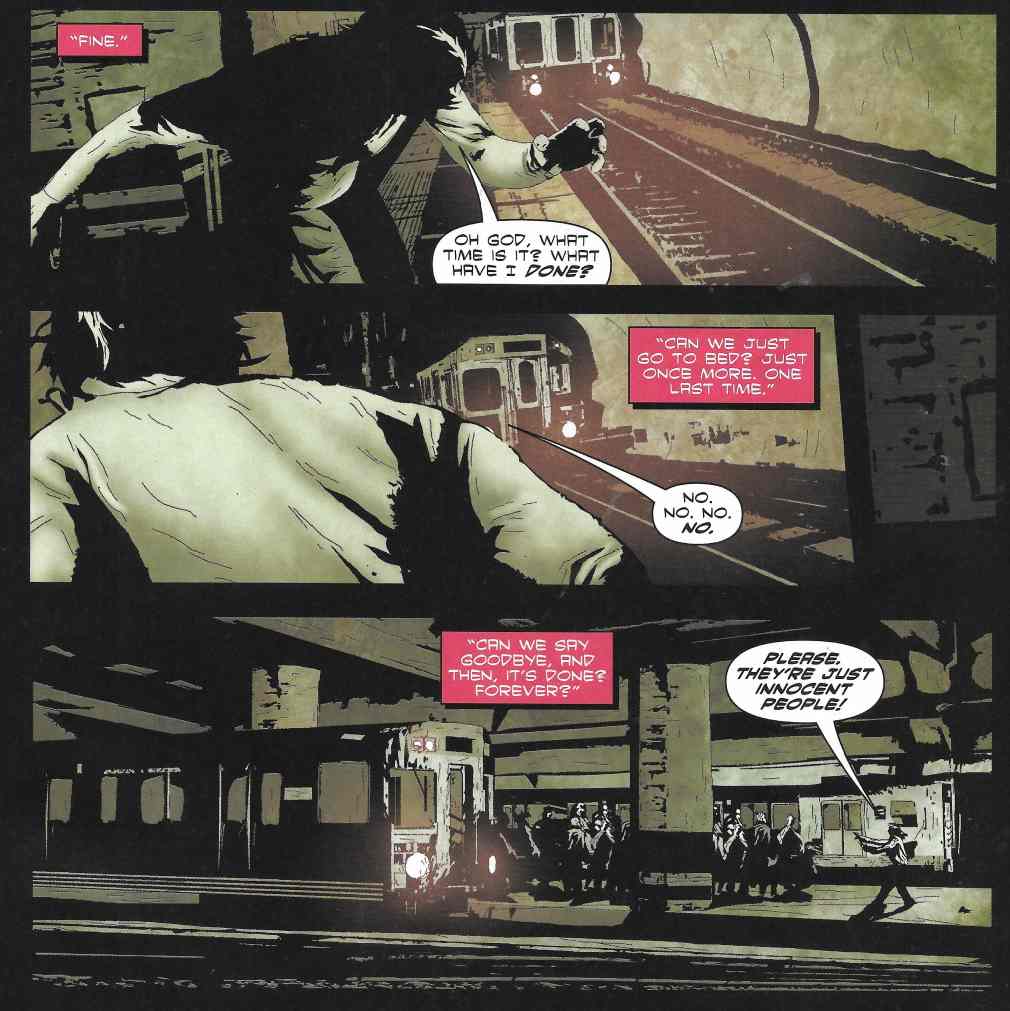 Leading to a load of commuters having the worst trip of their lives. Bennett can do nothing to stop them, it seems. 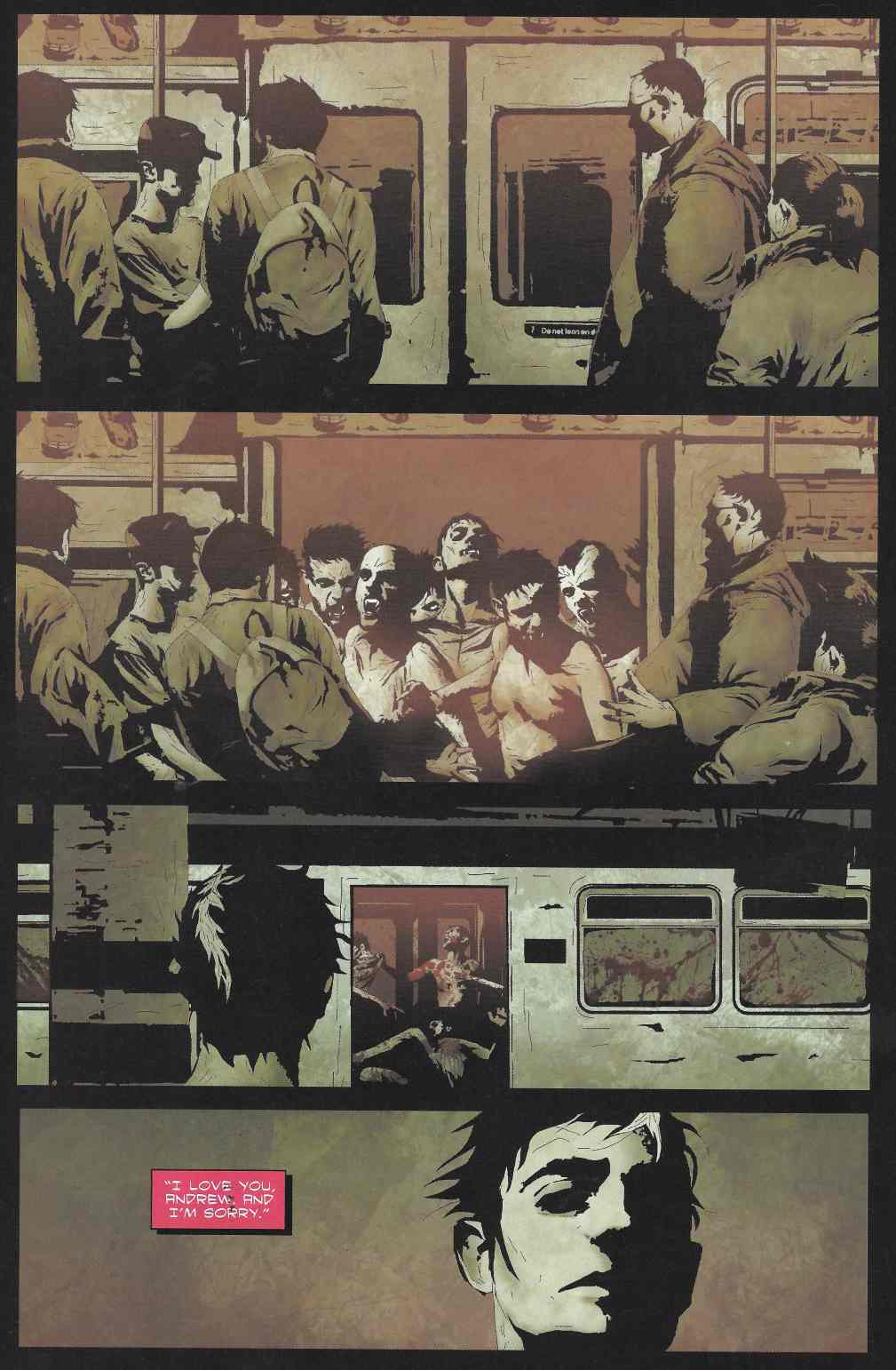 And then a flashback to the night before this mess, which is where our flashbacks now appear to have come to a head, as Andrew awakens alone (we assume he fell asleep with Mary beside him) and to a note from his former lover. 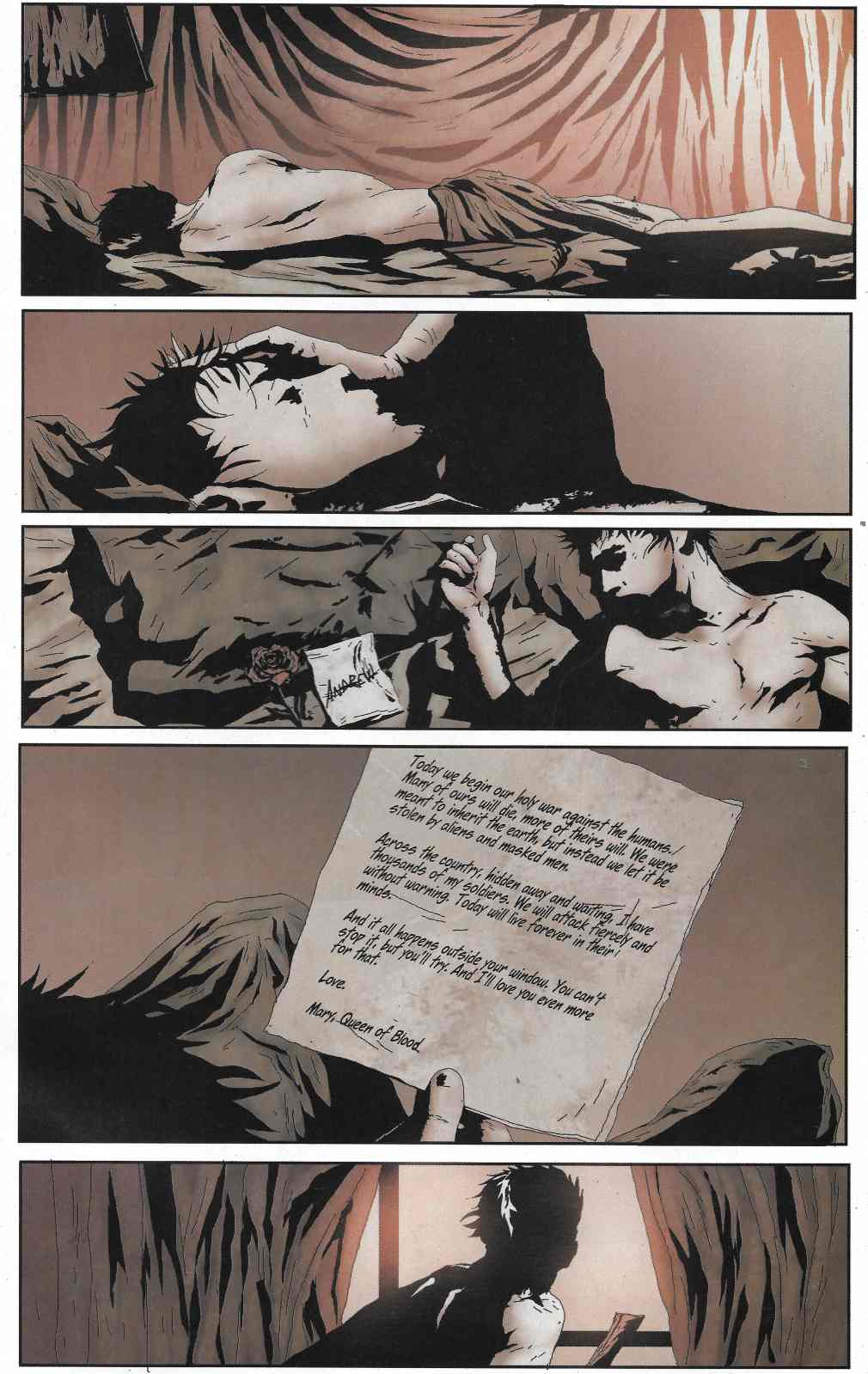 Then he looks out the window on the pile of bodies we saw him staking on page one. What a circle-jerk! 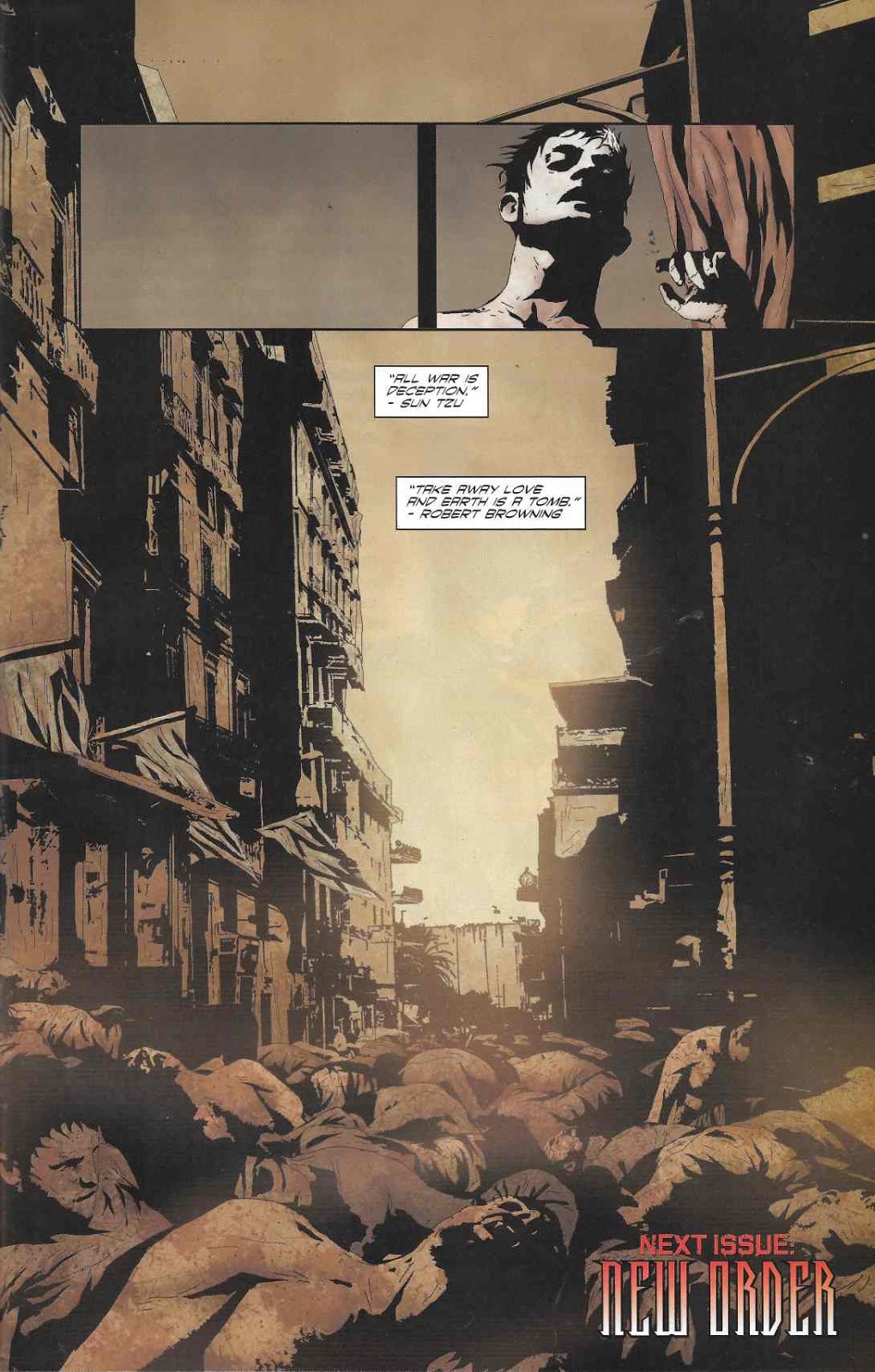 I’m not impressed with it. It has good atmosphere and great art, but the storytelling framework leaves me cold. I would have preferred a straight linear storyline. Maybe subsequent issues redeemed this beginning, but I, for one, am not in for more.
Posted by SonOfCthulhu at 4:39 AM