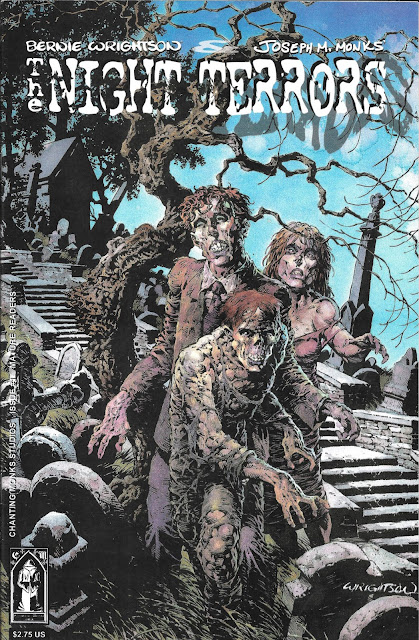 Here again we find a horror anthology that I have never heard of by an equally obscure publishing house that has some Wrightson in it. The story quality in this is much better though. The Night Terrors passes the bar of acceptable, lipping into the good territory. Sadly, this is a one and done book with no follow-up or issue number two. As for the publishing house, that might bear some looking into.

Chanting Monks Studio is that publisher’s name and it was the brainchild of Joseph M. Monks. Monks was a small time horror anthology comic author in the late 80’s-early 90’s who is probably most famous for co-creating the Cry for Dawn series.  “Cry” had a buxom redhead hostess named Dawn that garnered a cult following. Dawn herself was drawn by co-creator Joseph Michael Linsner. Linsner took over the character after Cry for Dawn’s demise at nine issues and moved her to a weird fantasy drama series called “Dawn” that I have lots of crapbox samples of and very little patience for.

Monks himself moved on to doing other short projects and small press books, even after losing his sight to diabetic retinopathy in 2002. One of those projects was to serve as the film director of a film adaptation of one of Monks’ stories called The Bunker (not to be confused with Joshua Hale Fialkov’s series of the same name), thus earning him the distinction of being the first blind feature film director.

Sadly, this title isn’t all great. Monks’ contributions to this four-story anthology are the weaker bits. Not to mention that the book starts off with a full page of double-columned text, more than 2/3rds of it Monks' that goes on and on about how this book came to be. I’m sorry, but just start the horror and leave this stuff for the end, please. Instead we hear how there were two other artists attached to do his stories and they took too long in getting their material in. So Monks takes a good chunk of our time railing against them. Not very professional of them OR of Monks. Let stuff go, man. You’ll live longer.

And speaking of going, let us just jump right in to the review portion where we start with a neat little Wrightson piece called…

We begin with this body horror piece by Wrightson, were as you see the art and inking have a very rough, unfinished feel to them. It looks a bit like a rushed convention sketch or a penciled sheet before inking, but none of that really matters. Even Wrightson’s minor doodles can have appeal. 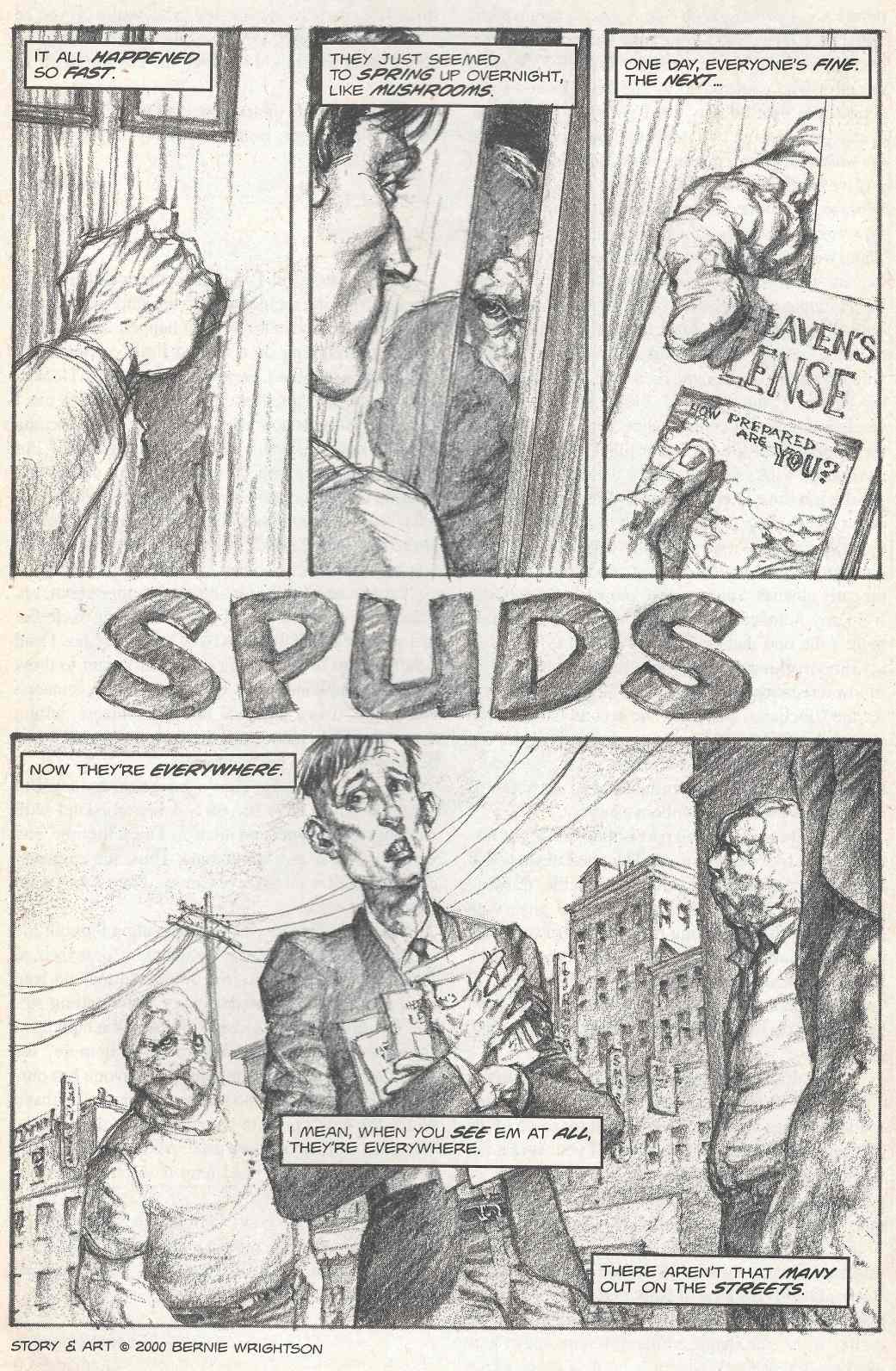 Or a peel, as this case may be.

Enter a world where a body deformity is running rampant through the population. A mutagen that causes people to look a little tuberish. 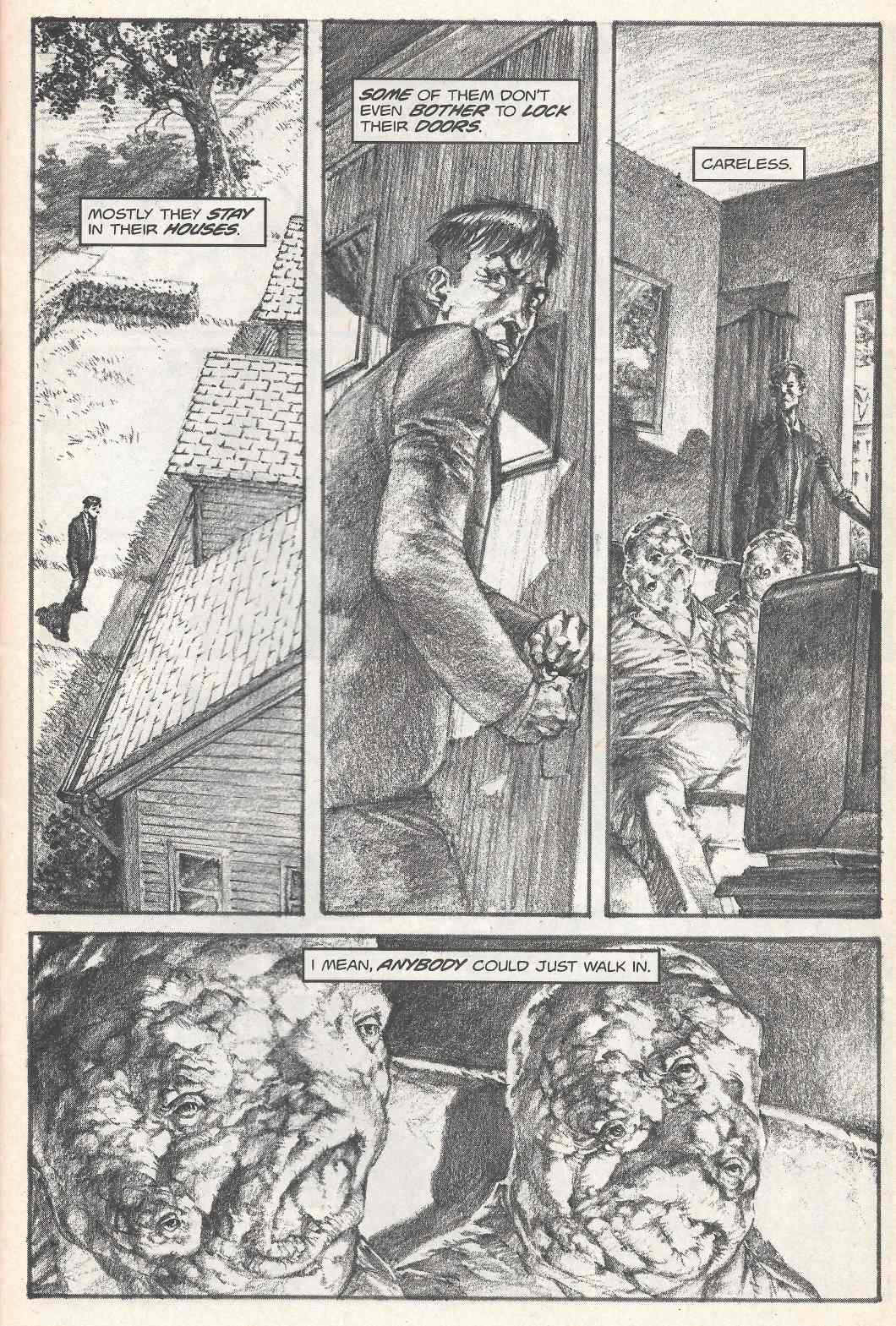 And while growing lumpy and filled with eyes, they are also prone to bouts of prolonged lethargy, especially when deposited in front of a television. Thus making them figuratively and literally couch potatoes. 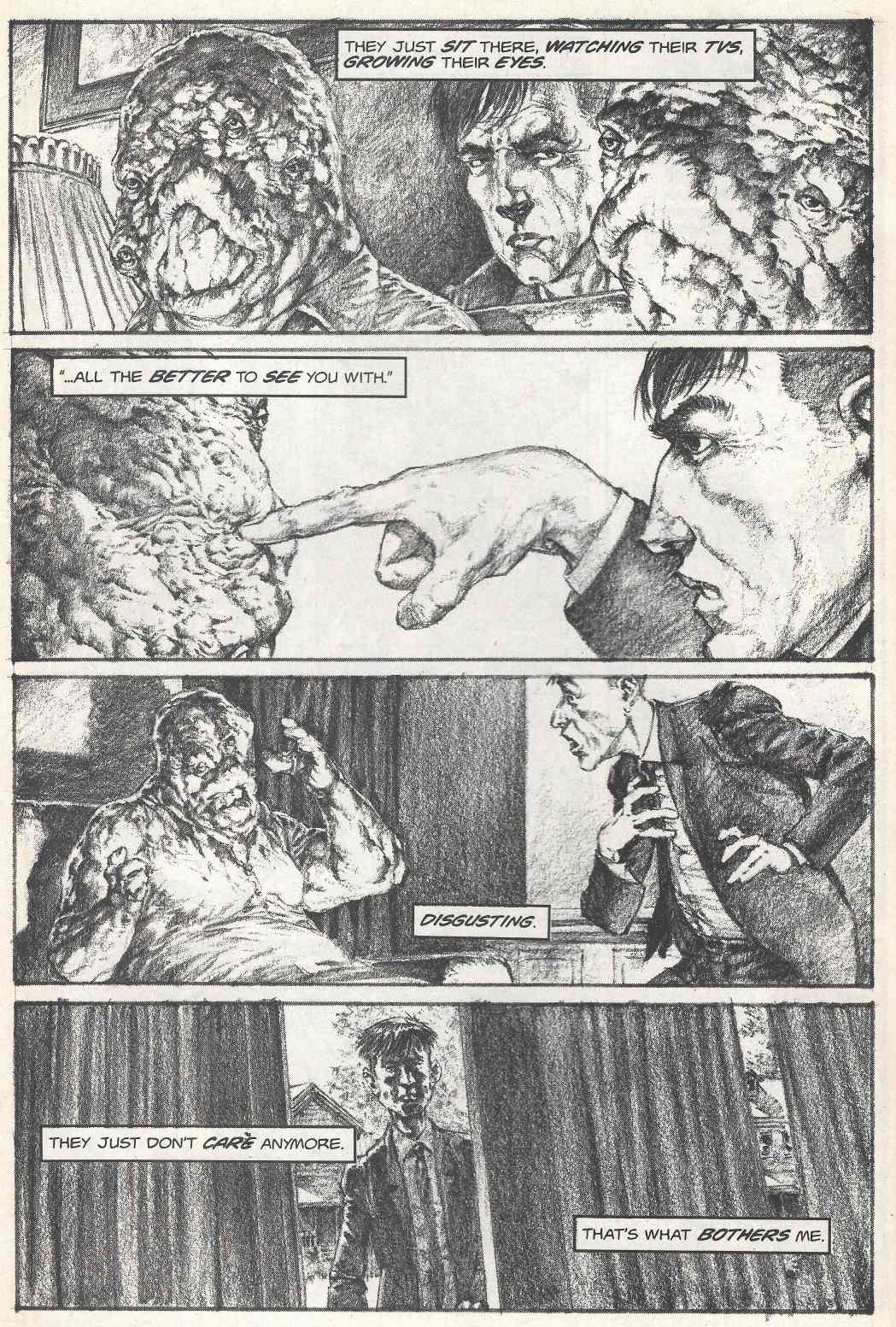 Our narrator wanders this new landscape in an amoral way, unconcerned as to the feelings of these disgusting new citizens. He violates their privacy and invades their personal space. For their part, they seem to not mind at all.
They are uncaring to the point that even sexual assault doesn’t jog them from their coma-like existence. And we know this because… 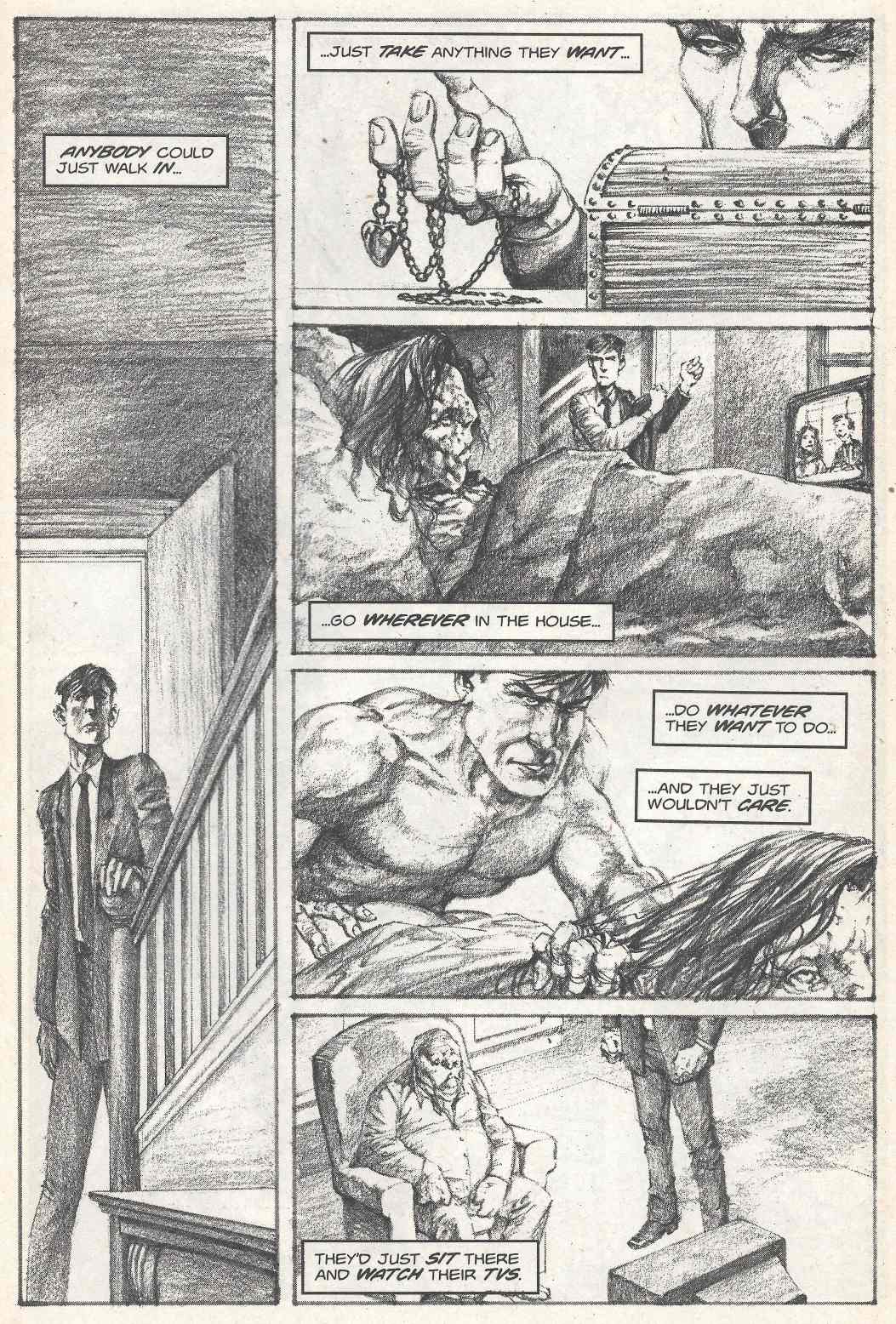 It’s then that our narrator has gone too far and we wonder if this is all in his head. If what he is showing us is a fever dream or delusion he is having. Especially when he takes to murdering one of them. 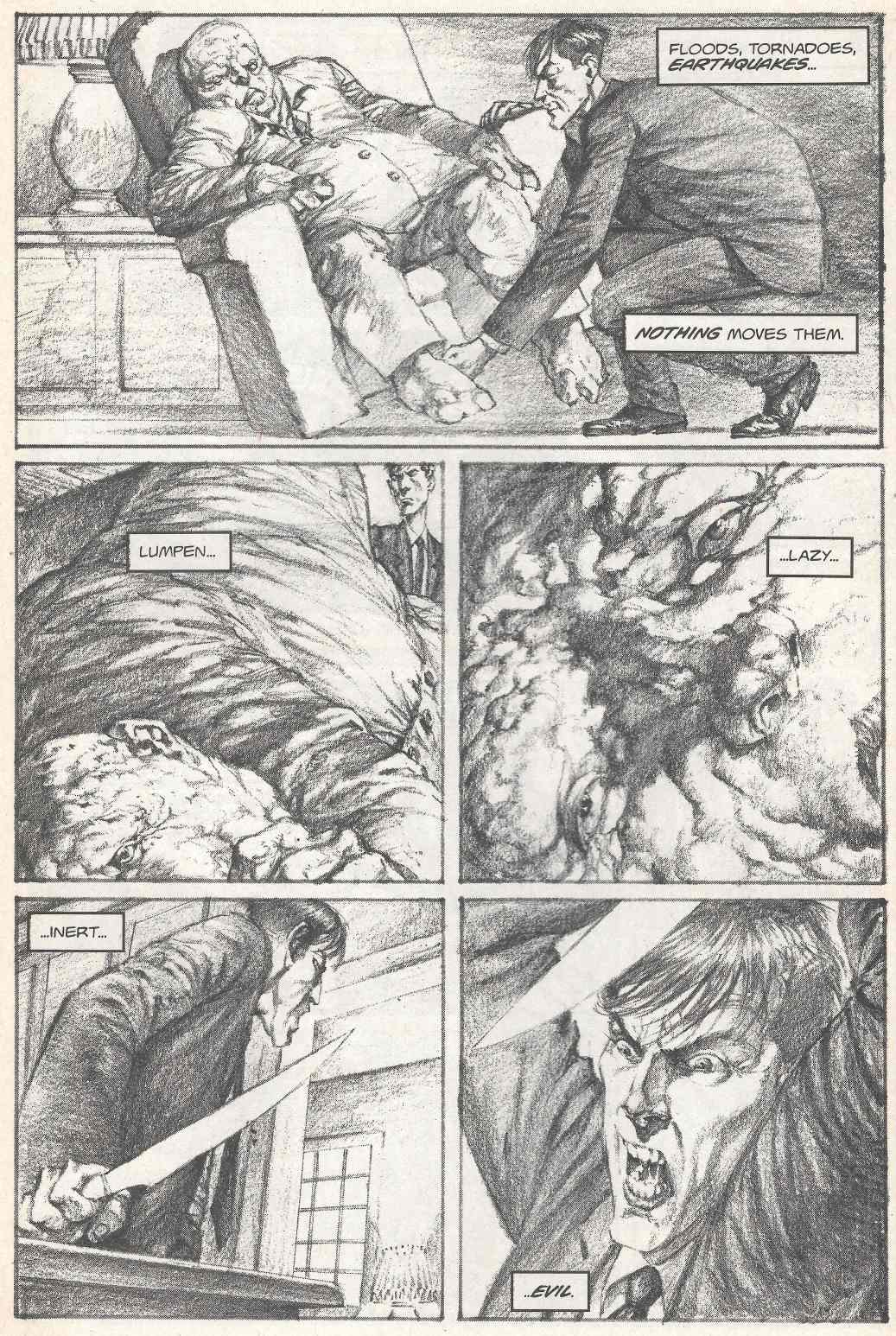 Which causes an abrupt change of heart. 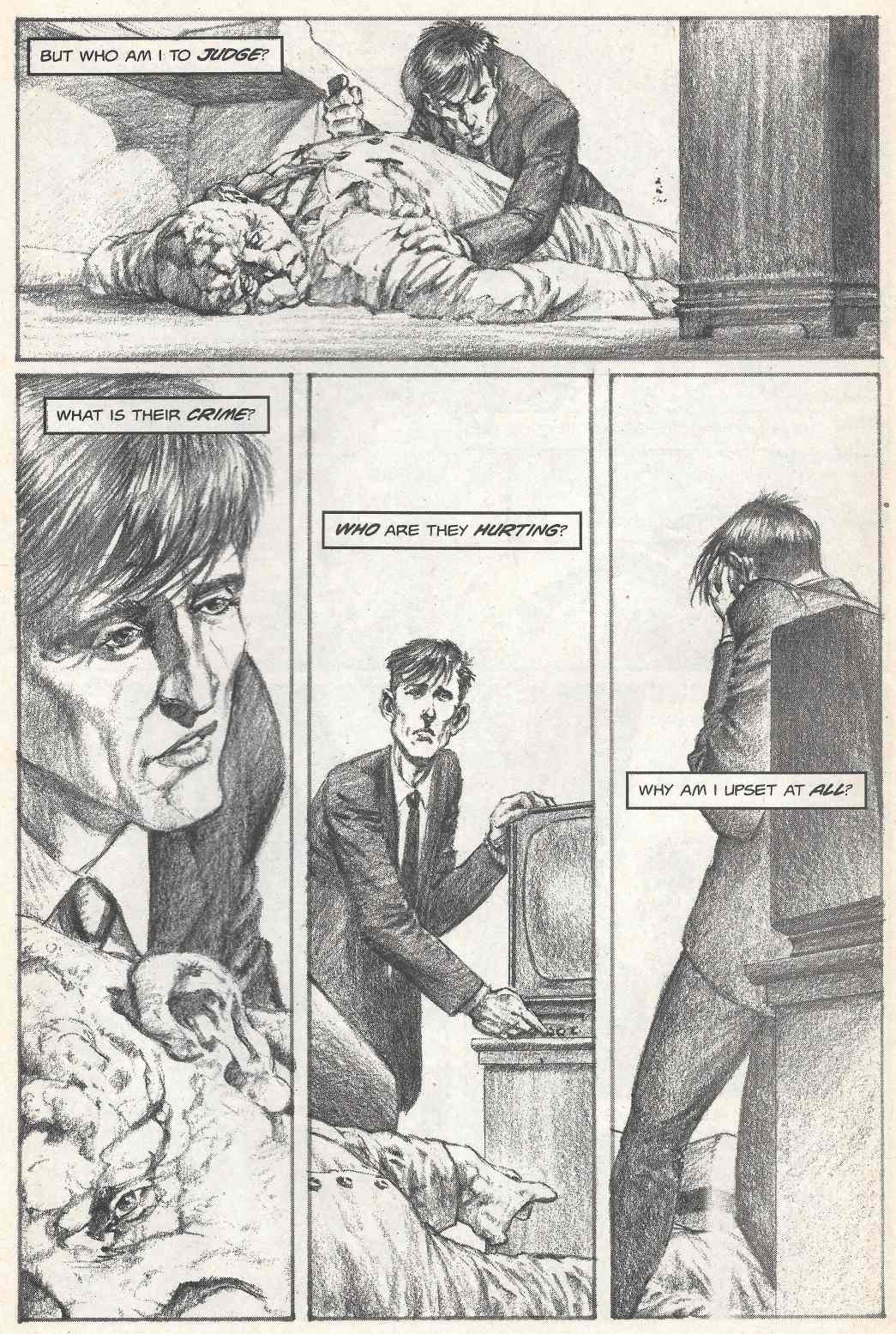 It’s only now that he begins to sympathize with them that I start to wonder if most of this is metaphor and we are talking of how society is this same type of lethargic group of cattle, unconcerned about the individual or the loss of a few lives or some property by bad actors as long as it is fed its daily dose of televised distraction… 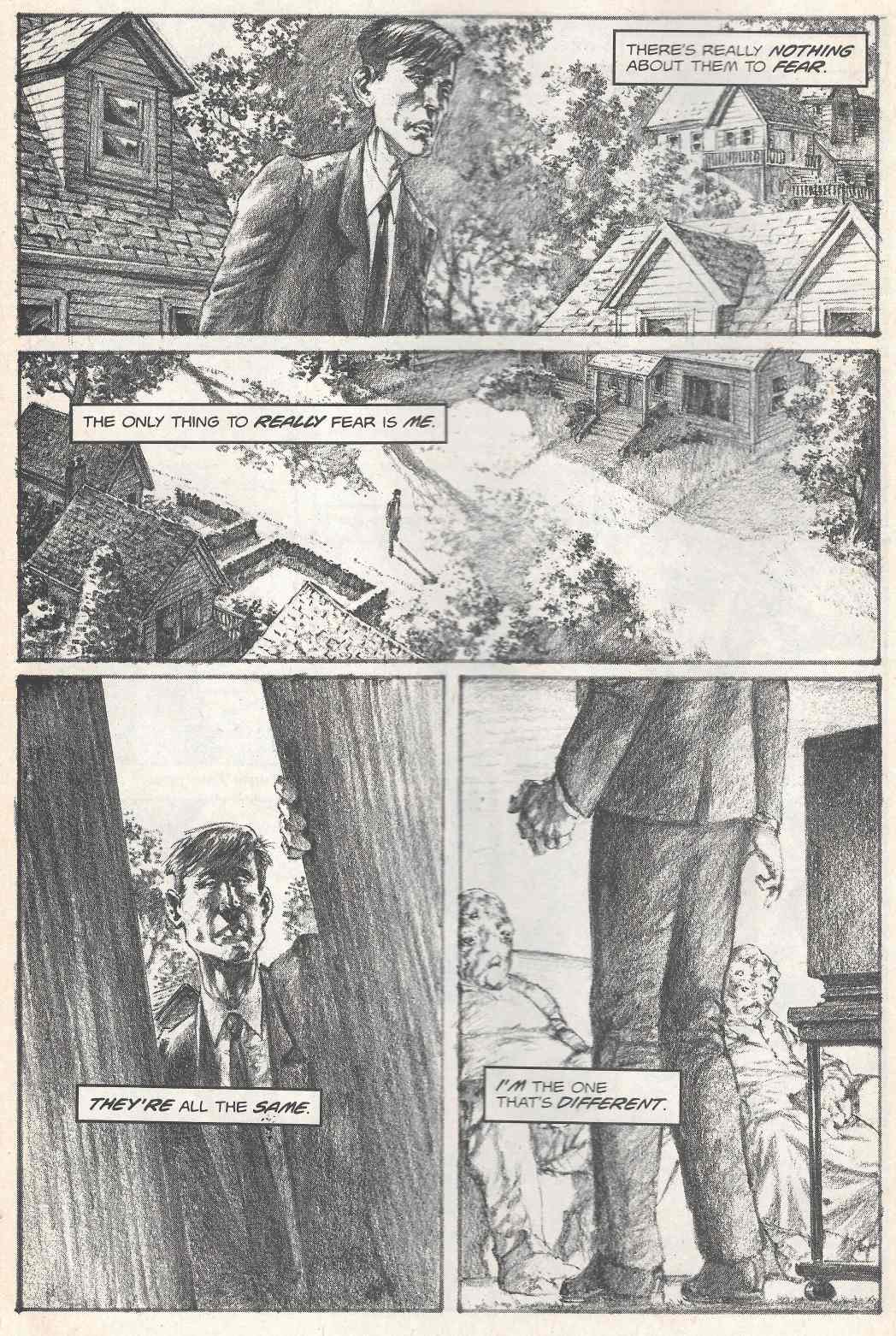 …and if so, maybe that makes the final panel all the worse. 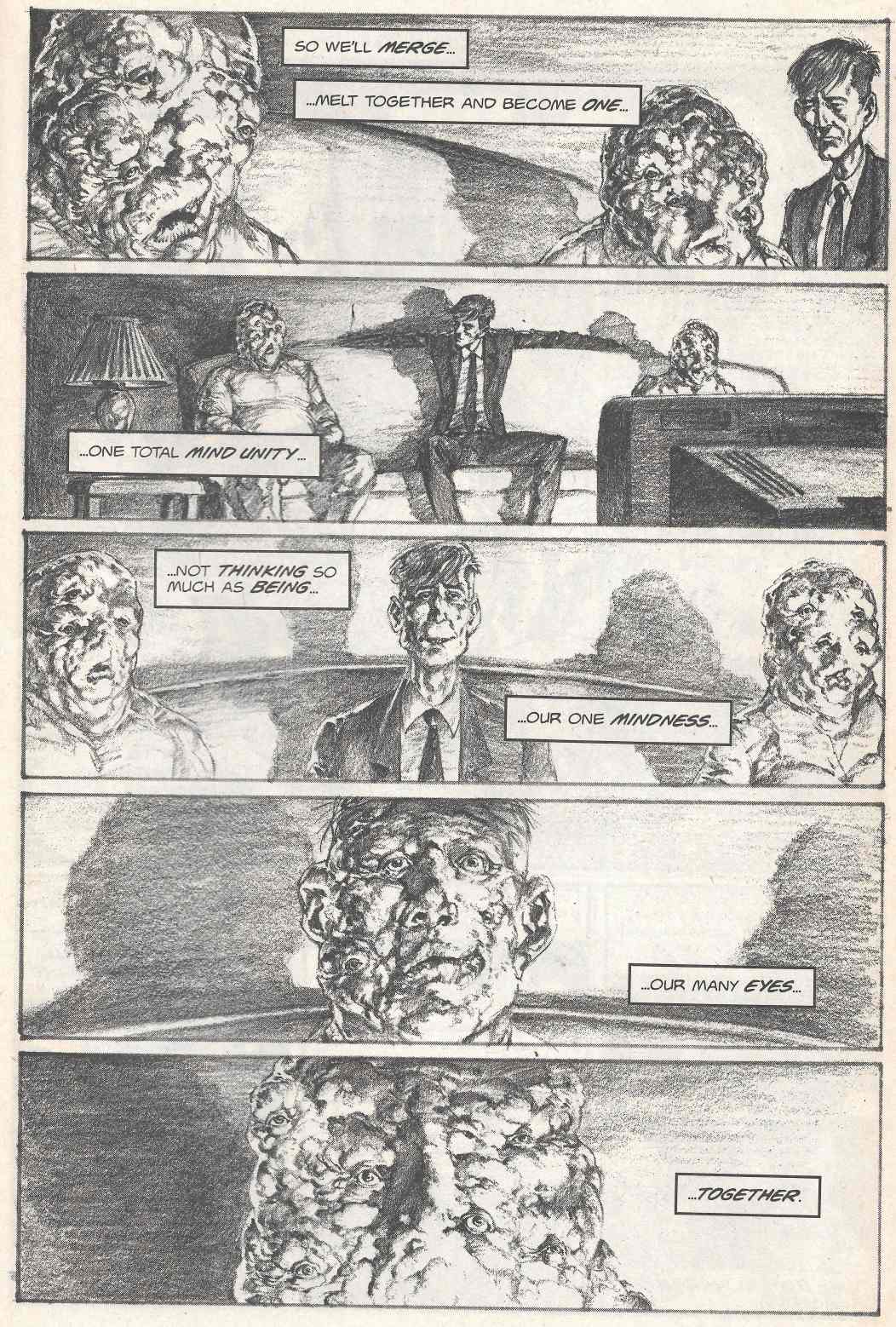 Next up we have this three-page delight by Stout, all drawn up in the style of an EC comics bit but done a level better in art. Two police detectives at a crime scene pour of the journal of the homeowner. The author is wisely playing what happened here close to the vest, but one cop says something surprising was found in the swimming pool to get our imaginations working. The journal meanwhile, spools out how the resident was obsessed with fish and evolution. 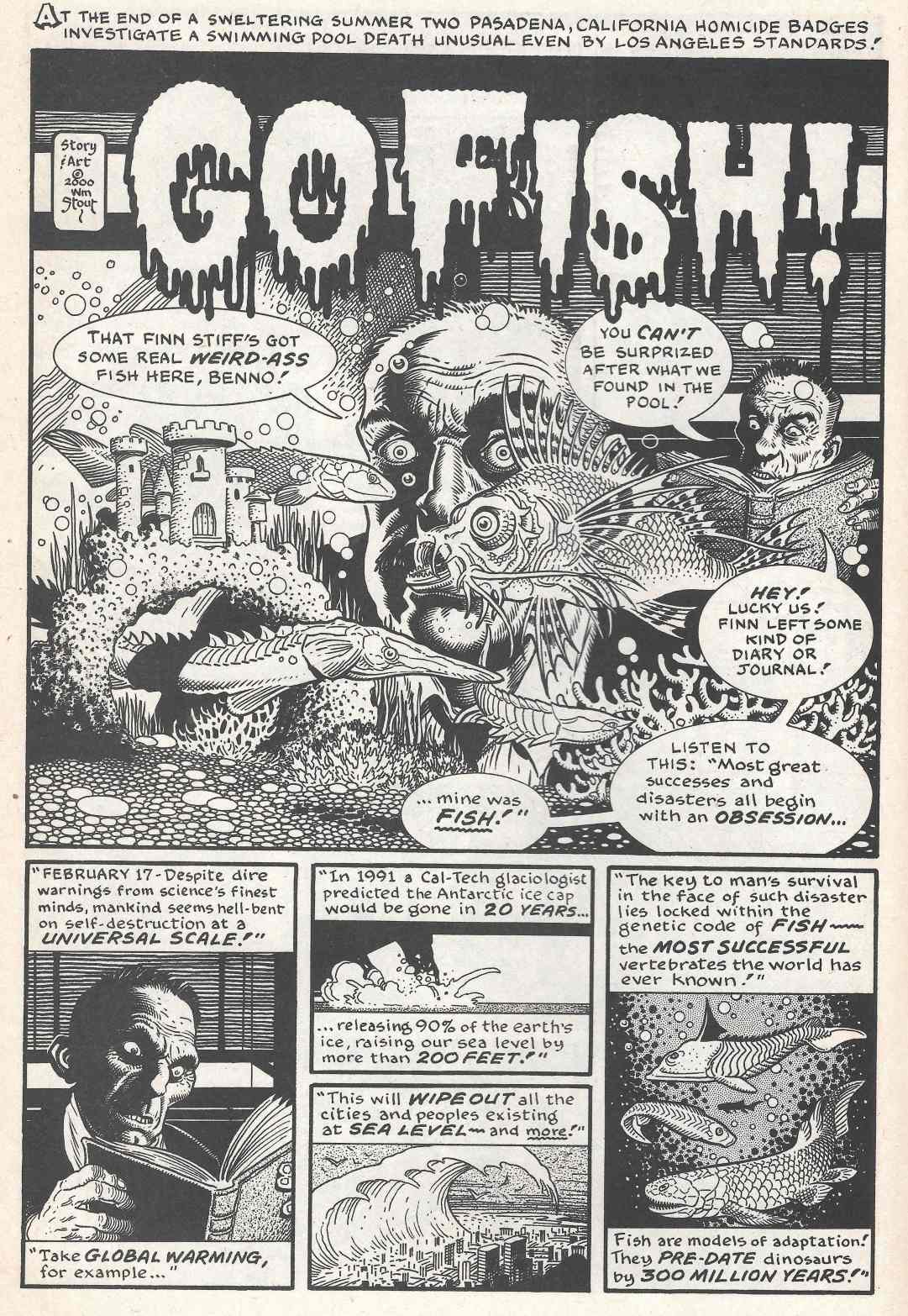 To the point that he "Crispr’s" himself up a handy-dandy fishman serum and then injects himself. That art is amazing, isn’t it! 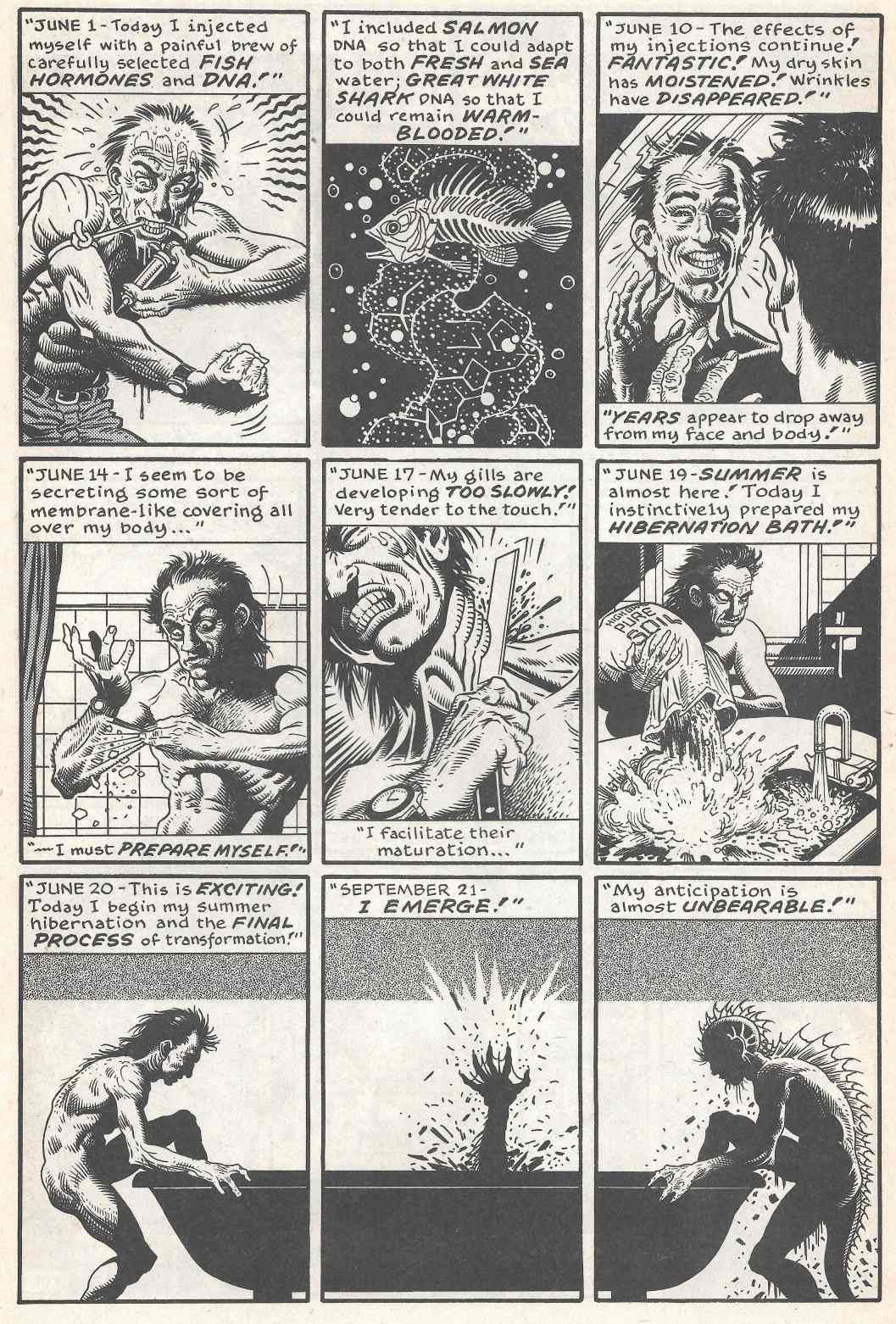 And we head into the final page with its startling story twists and I must say that this is worth the price of the book right here. A book carried upon the back of three exquisite pages.. 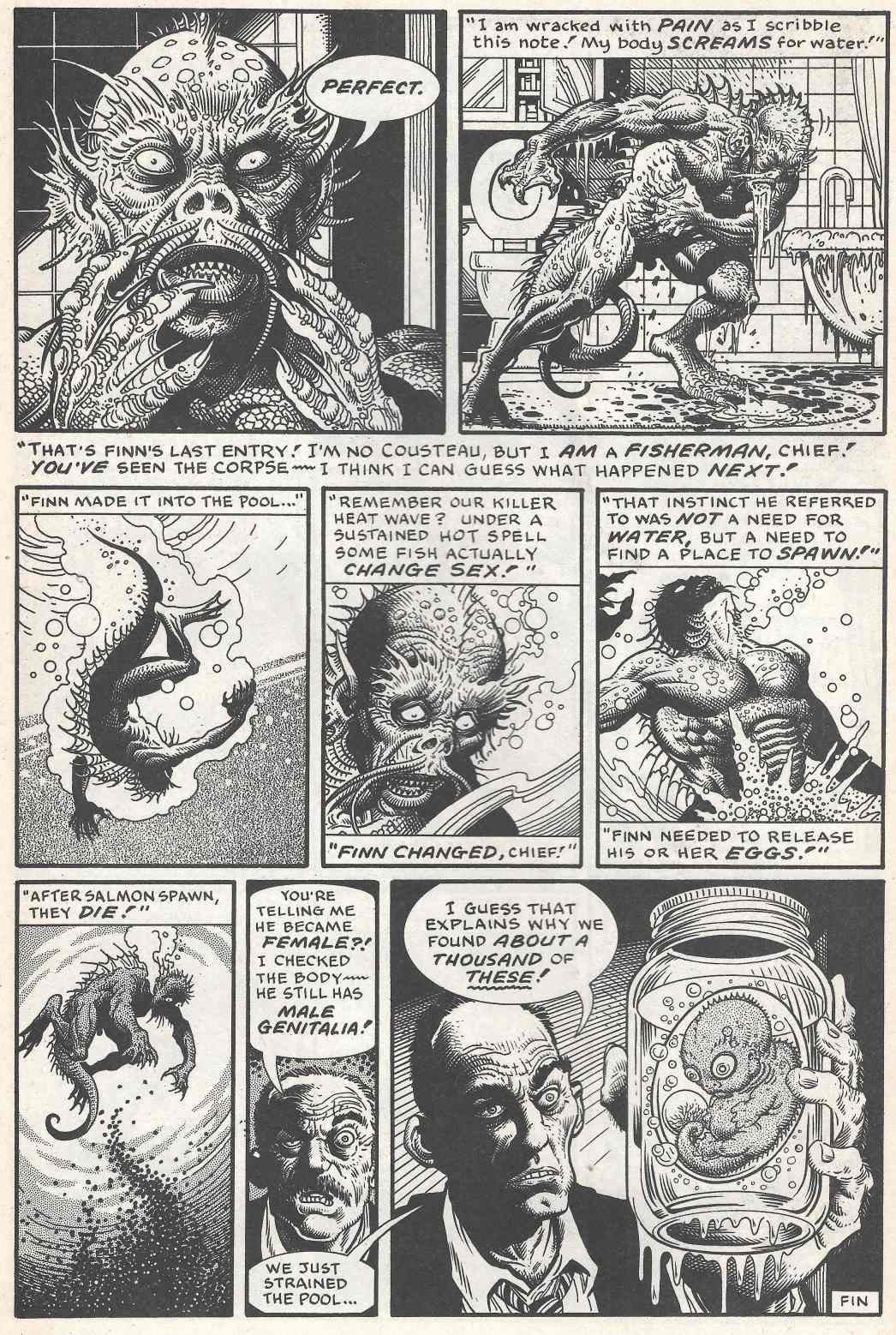 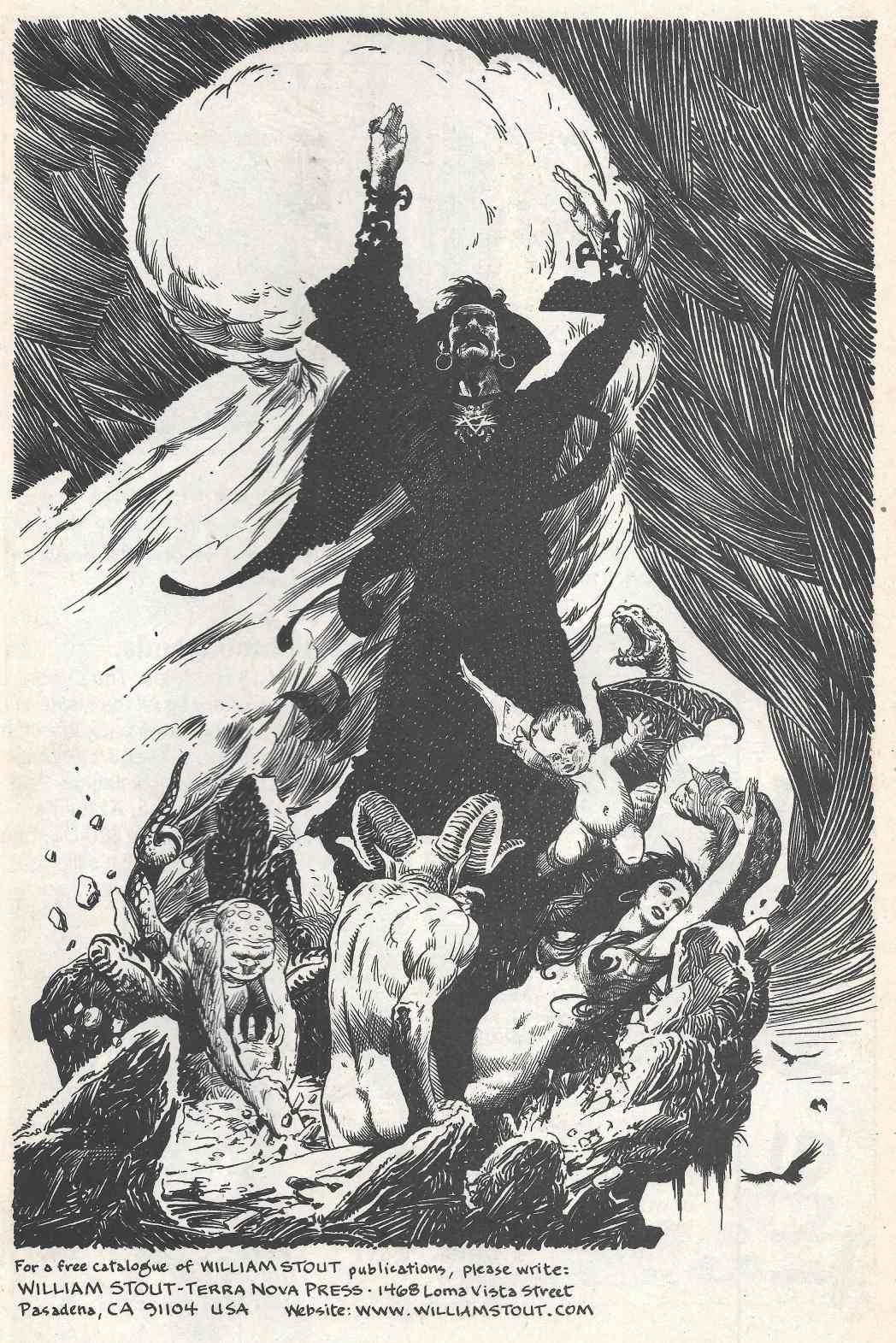 And here we find the first of two Monks stories, neither one very good. That may be harsh of me, but the first is exactly the twist you see coming. However, it does feature great art. I’ll start us off with a man finding an accident in the back bedroom where his shaky old dog is bedded down. 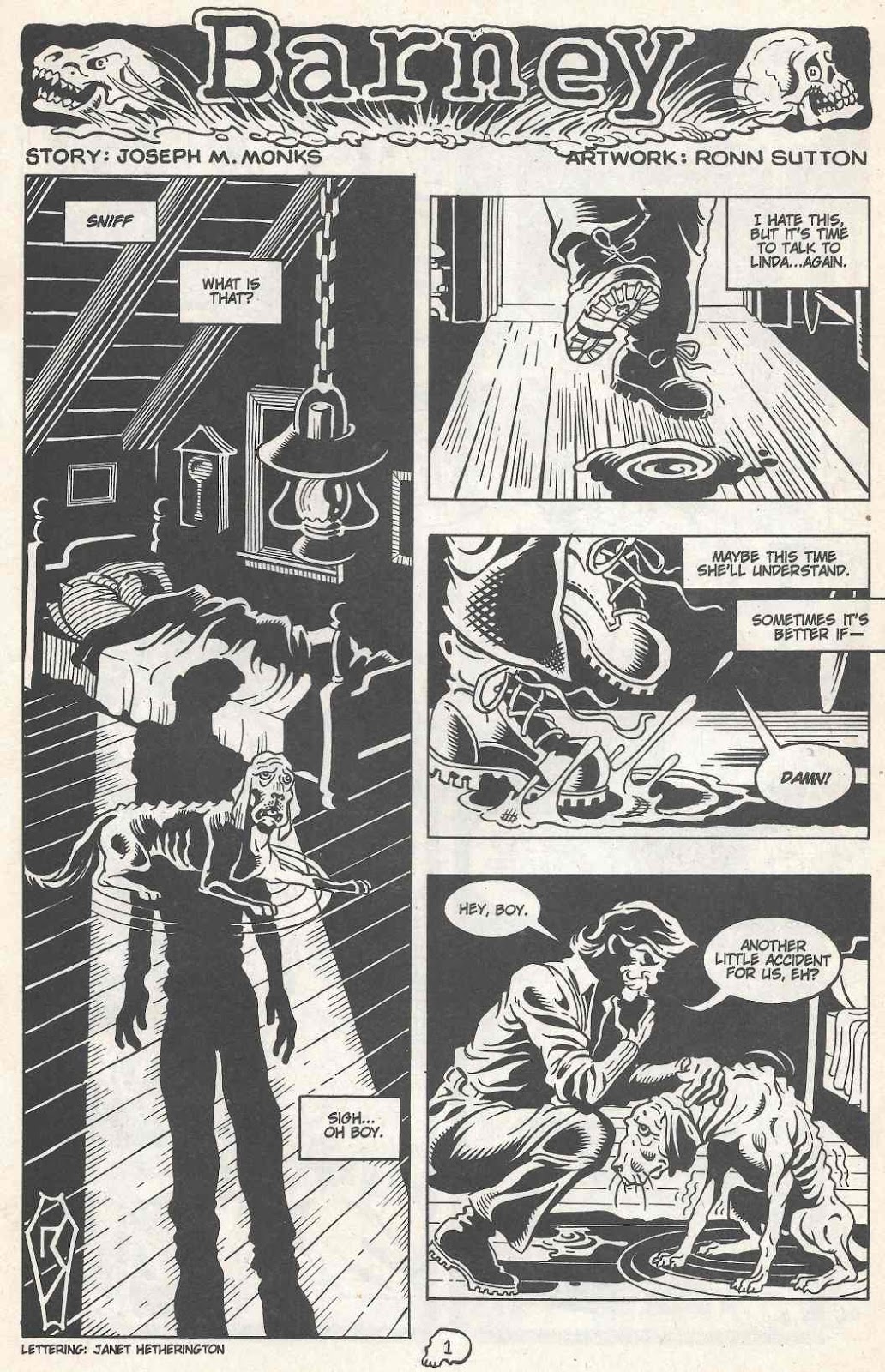 Our male character breaks the bad news to his lover and they discuss euthanizing the creature responsible. 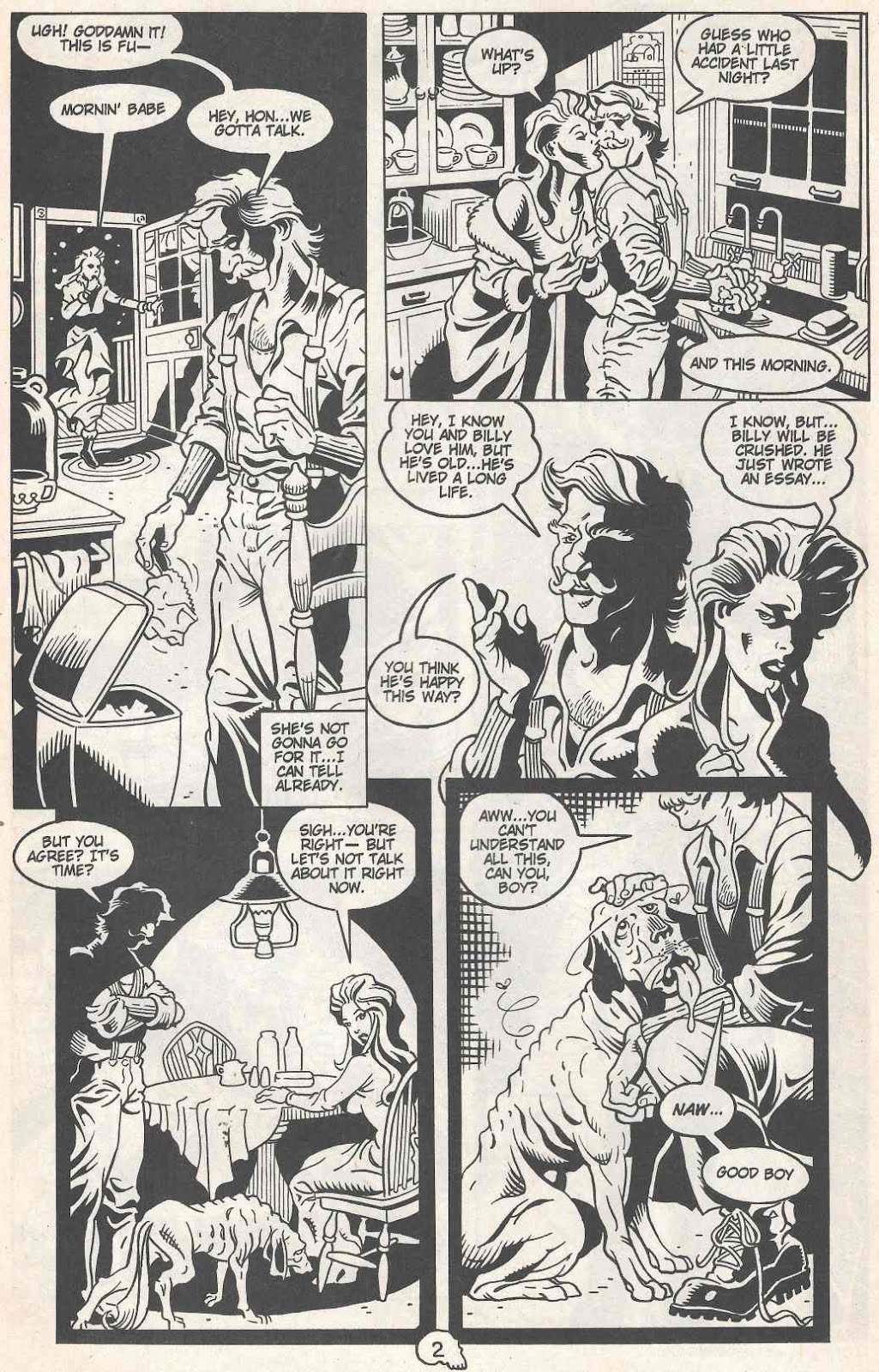 Begrudgingly, the choice made to end his life. 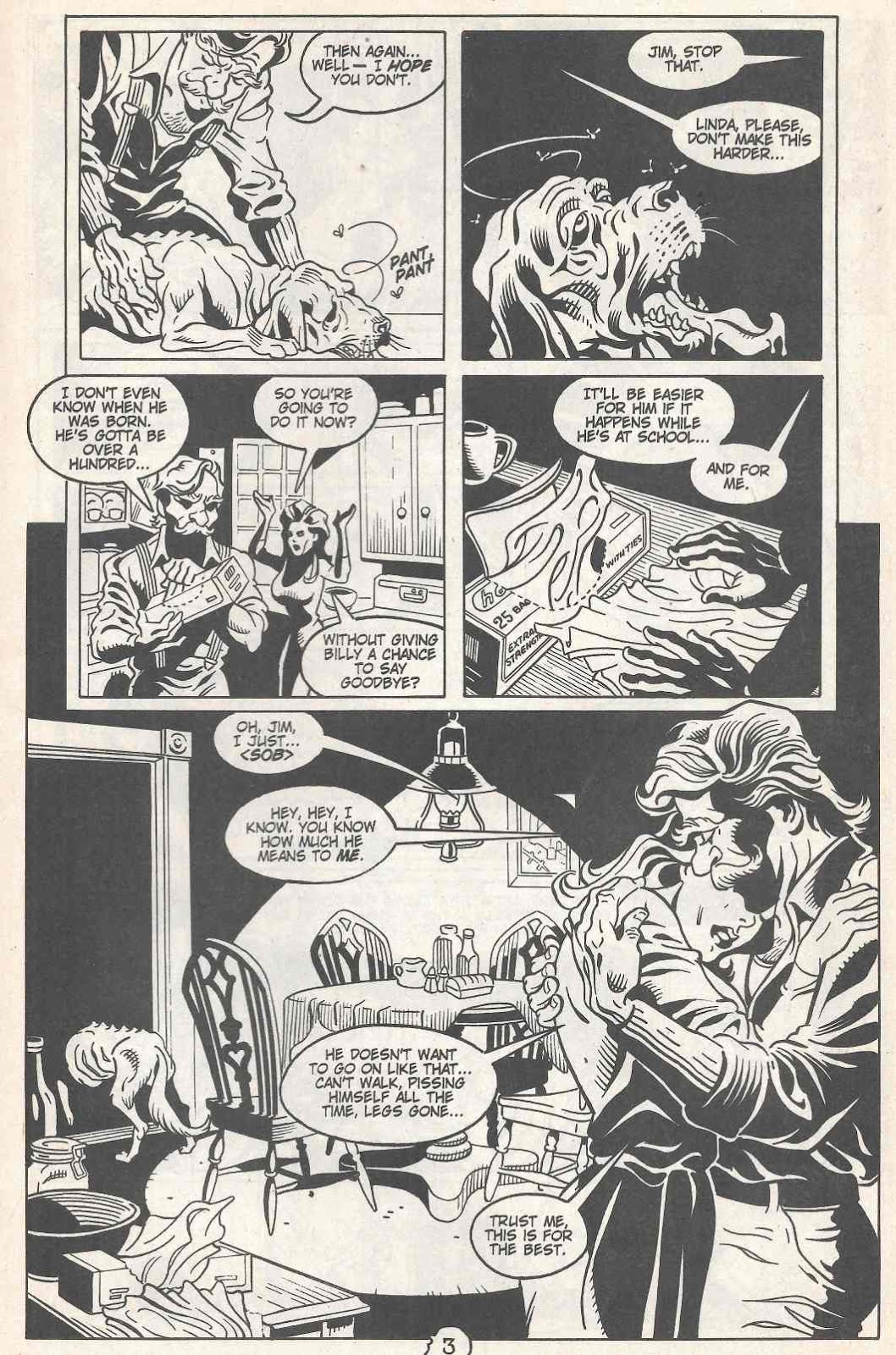 And we find that the twist is there was an old man, the girl’s father, in the bed behind the dog in the first shot. He’s been the one dirtying the floor and he is the one who gets suffocated to death. As I said, the art is good even if the twist feels obvious and unearned. 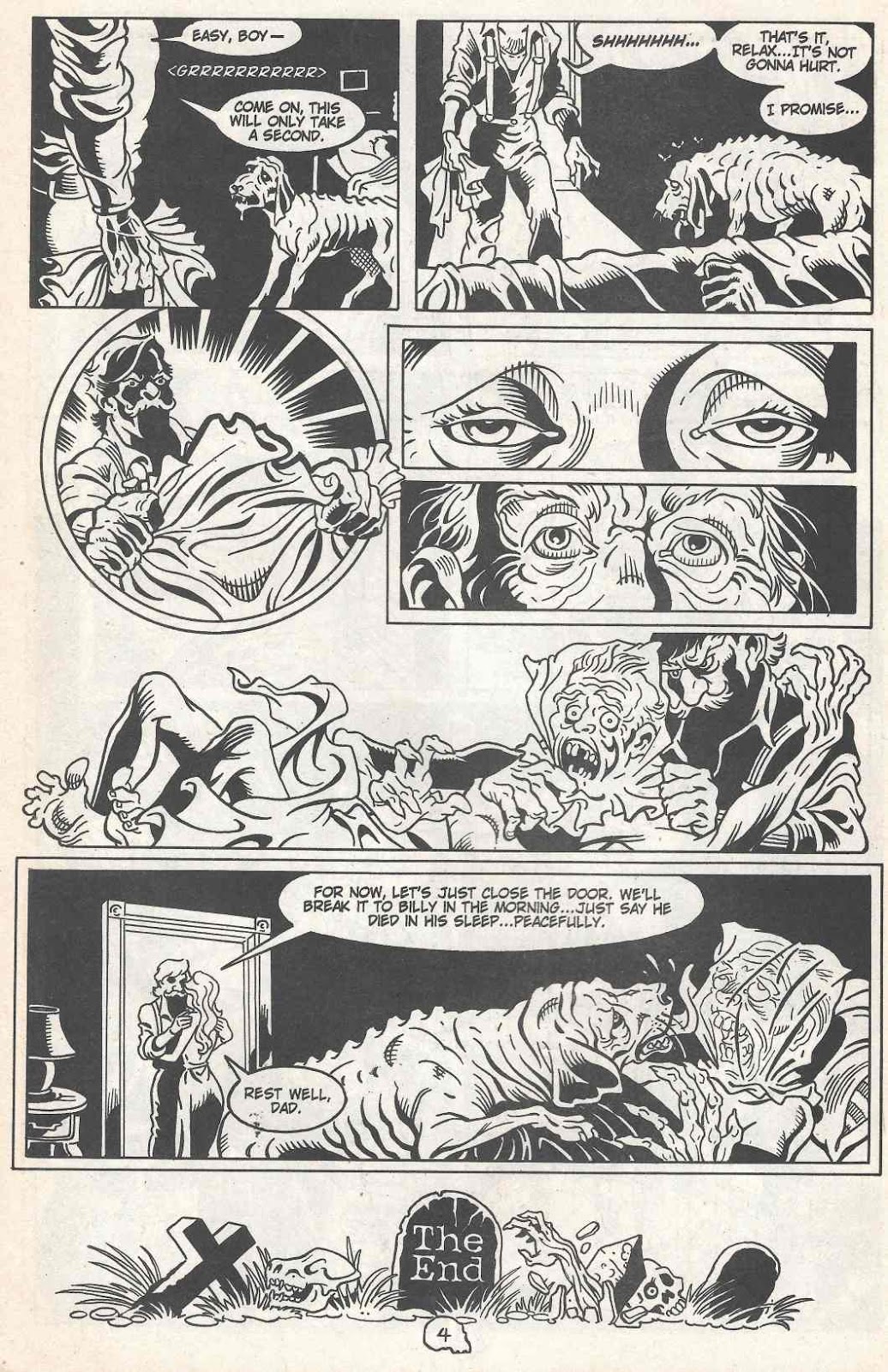 This last bit is the only kicker to the entire book. Monks lays out a meandering story that goes on too long and once it gets to the ending it is bizarre in execution. I am going to cut this down to the chase for you and pare off a lot of the deadwood on this story tree. We meet Chris, a young high schooler with a sister. 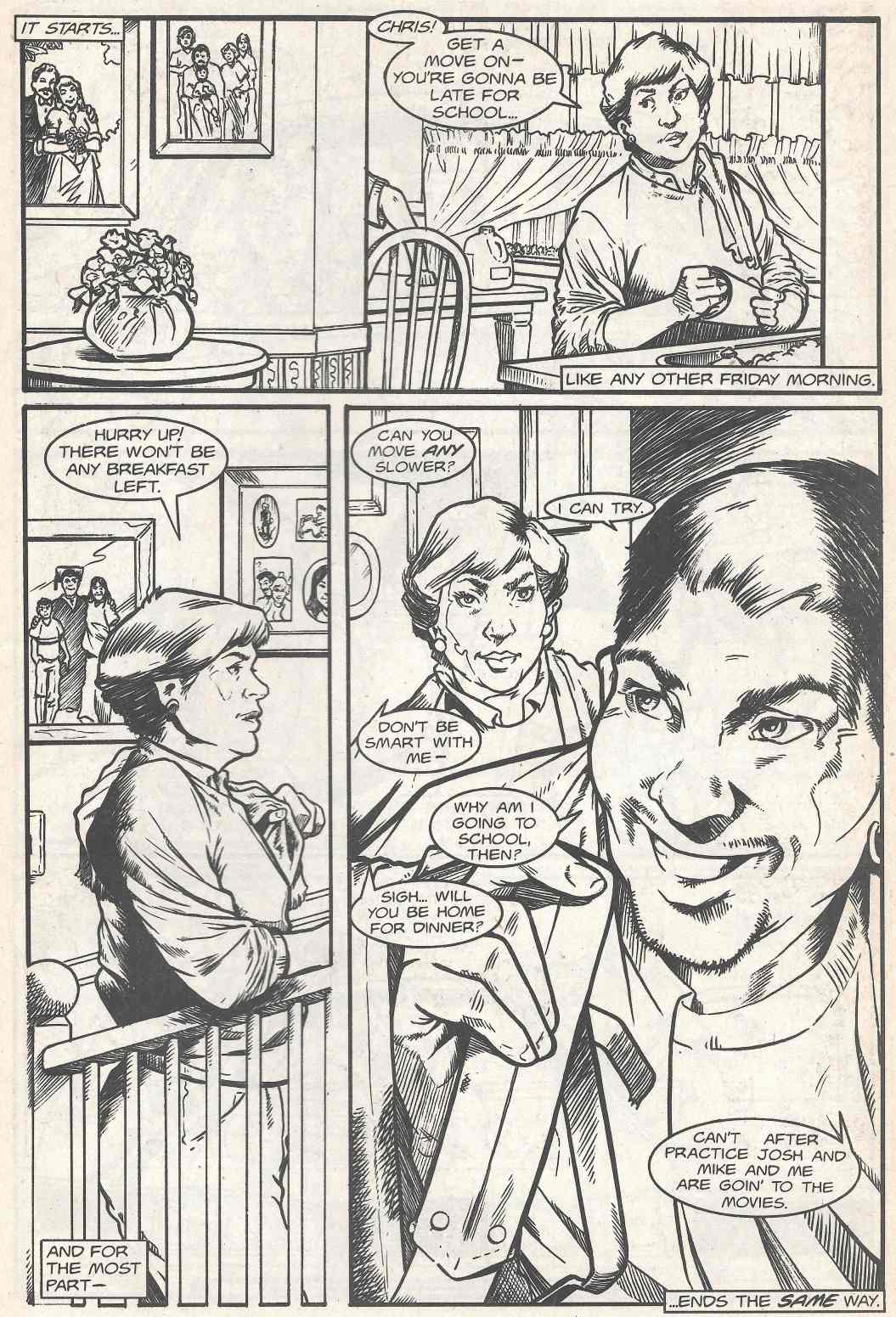 He is a virgin and his pals are always ragging on him about it. On page two of story we are told they are going to a party tonight and not the movies. Boom! Story setup! Done! 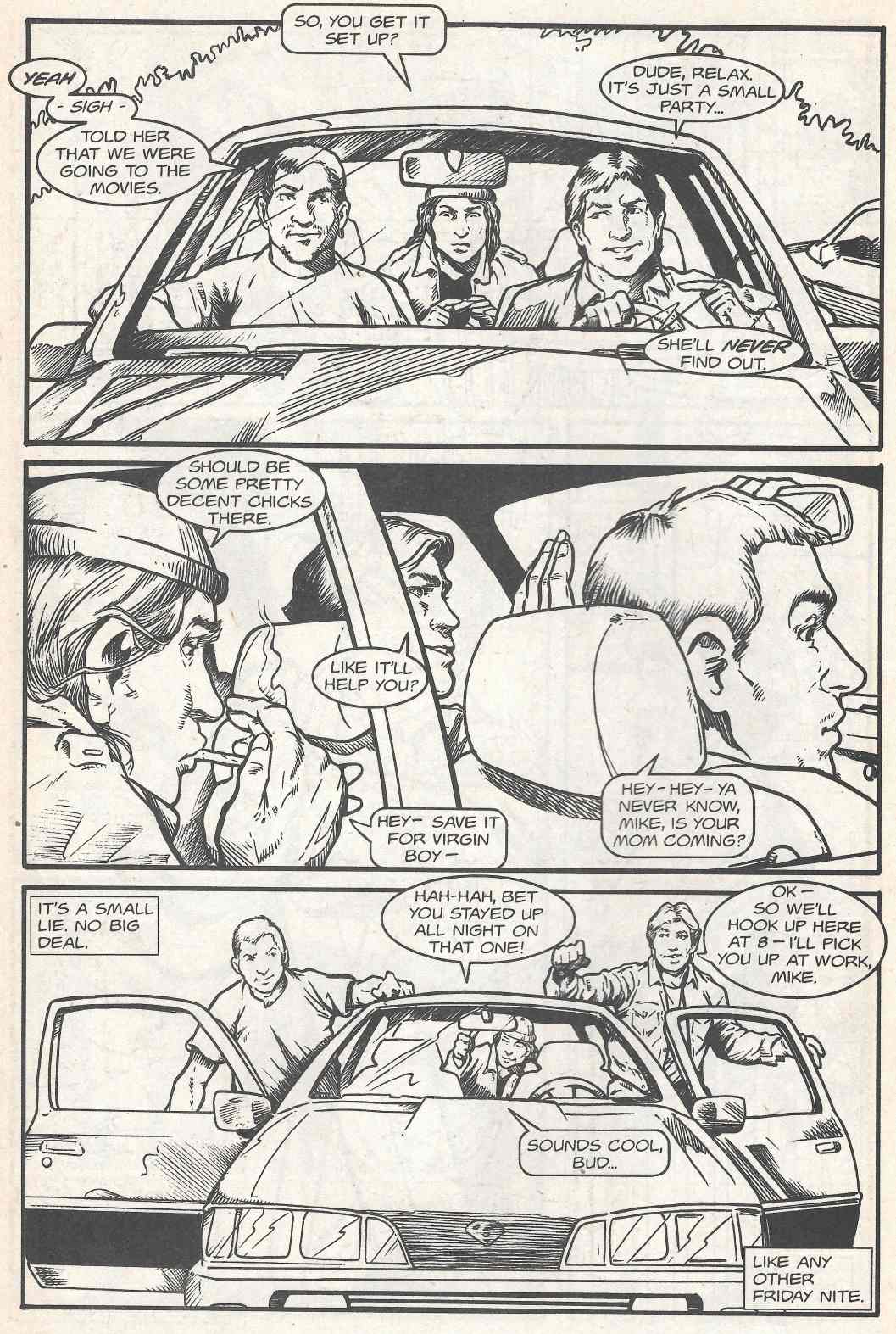 We get a page where a guy slaps a condom package to Chris’s chest because 1. He’s a virgin and 2. There is a wild party tonight.

We get a page where in class there is a note passed that there is a party where beer will be served happening tonight.

Then Chris and his friends talk about going to the party. Which we know because of three pages before where they said they were going.

I’m sparing you these.

Then we get to the party (finally) and there is a girl there that looks like Chris’s ex. 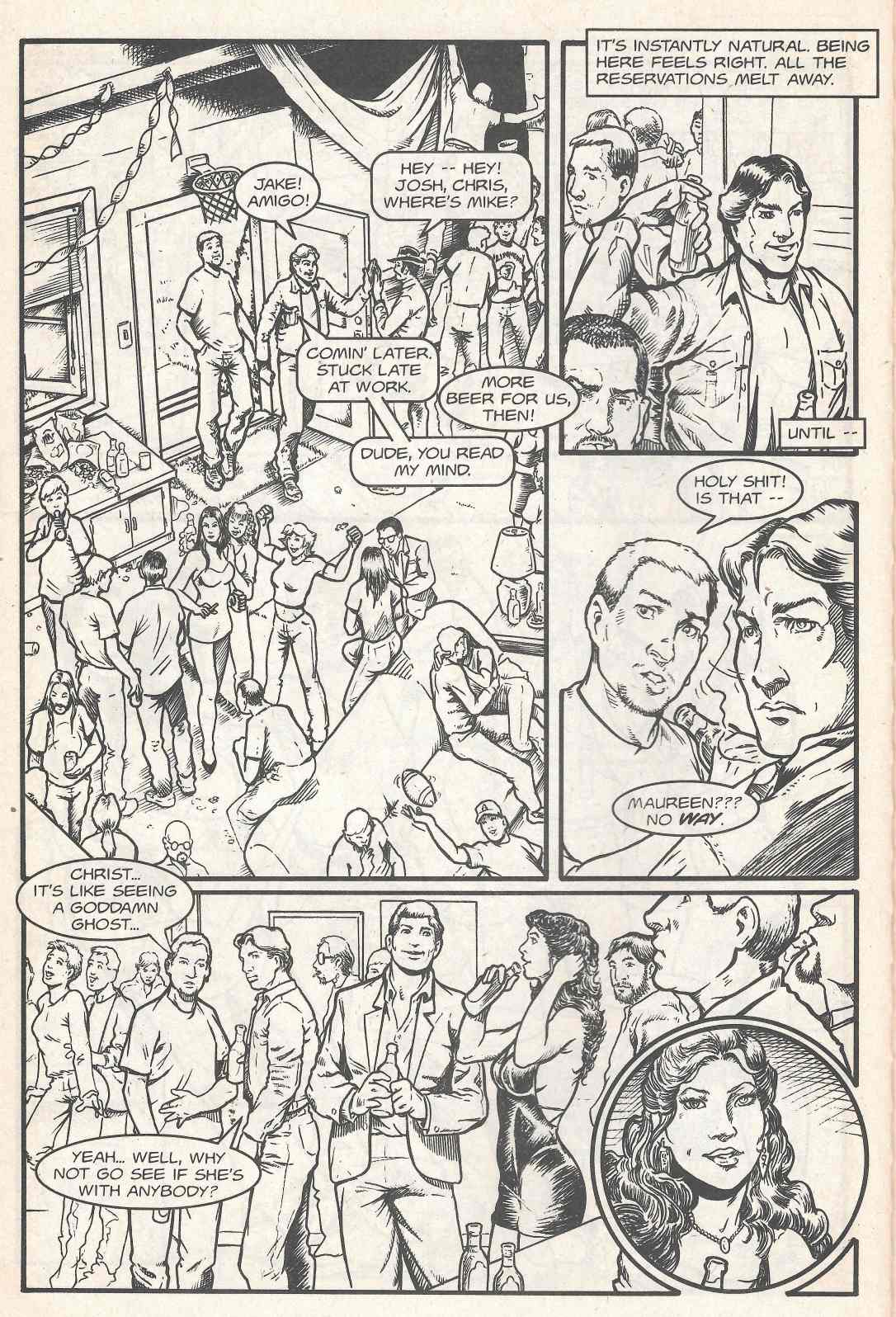 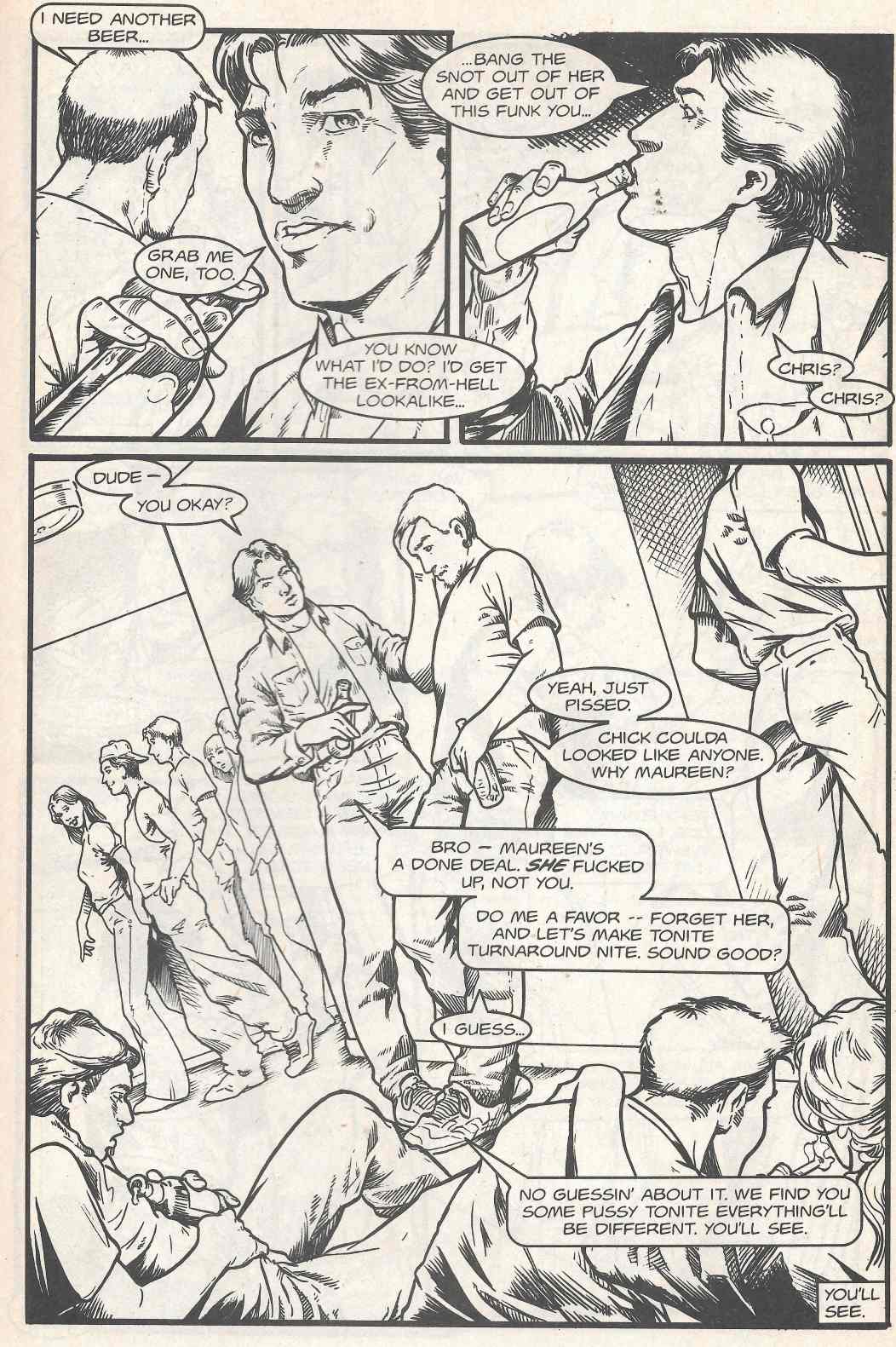 And while on the way to the bathroom, allows his friend to lead him to an easy hookup in the back bedroom. 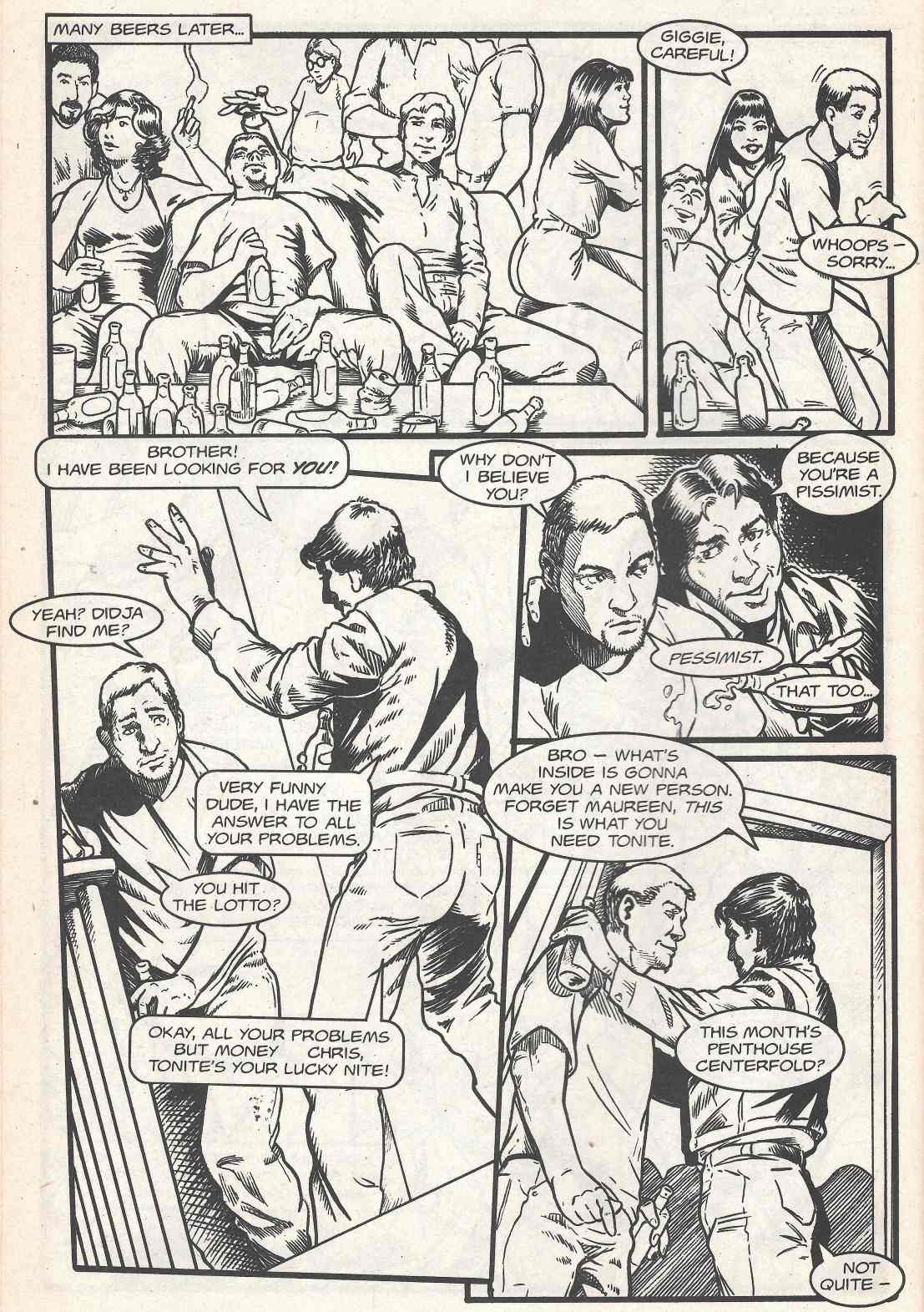 A hookup that only Brock Turner would say yes to. Why is this chick half hanging out the window? It’s necessary for the plot, that’s why. 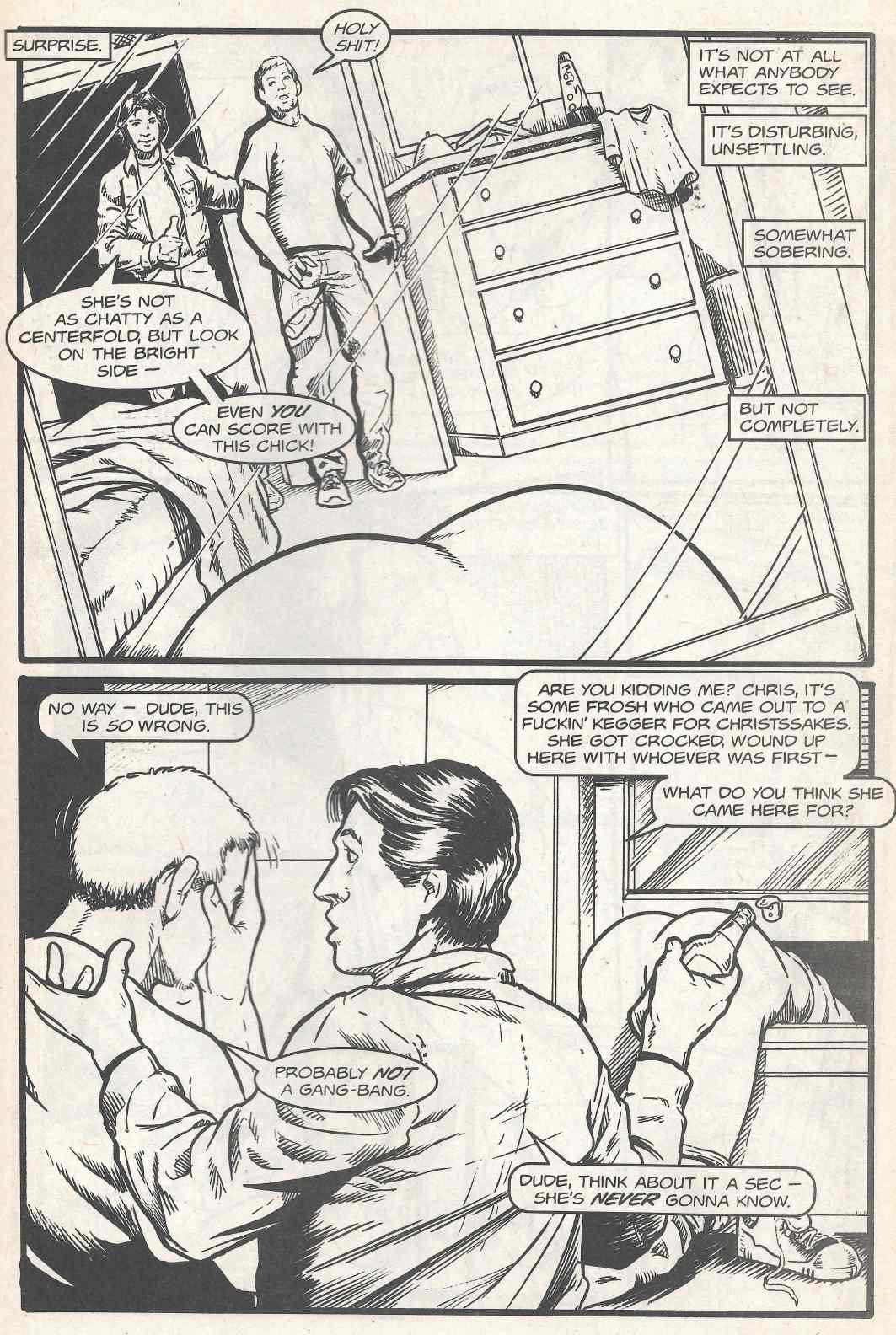 So, Chris has sex with her while she’s unconscious. Which makes him a sick fucker who we all hope dies. 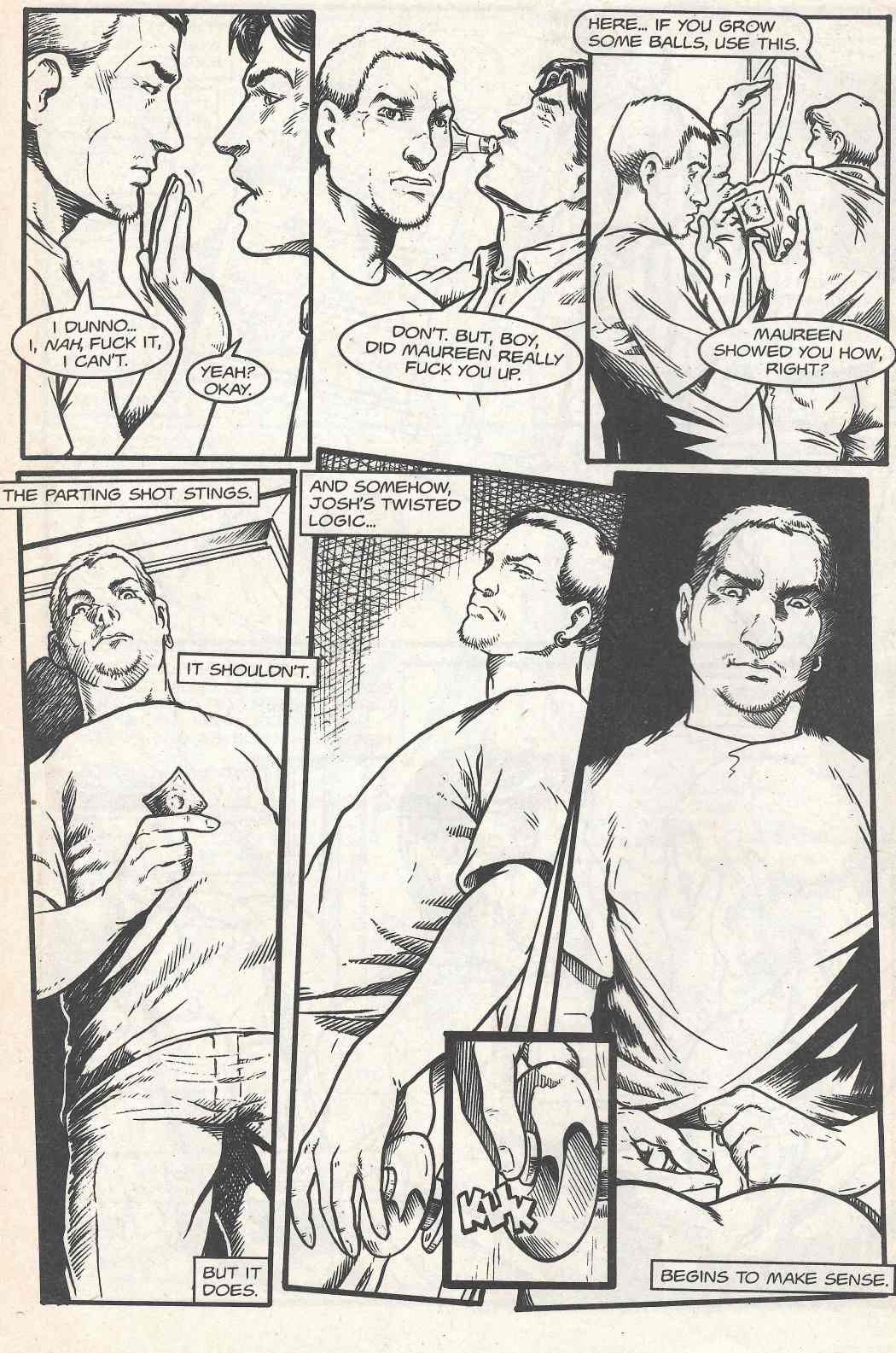 And we find out that the chick in the room with him is Tracy, his kid sister. 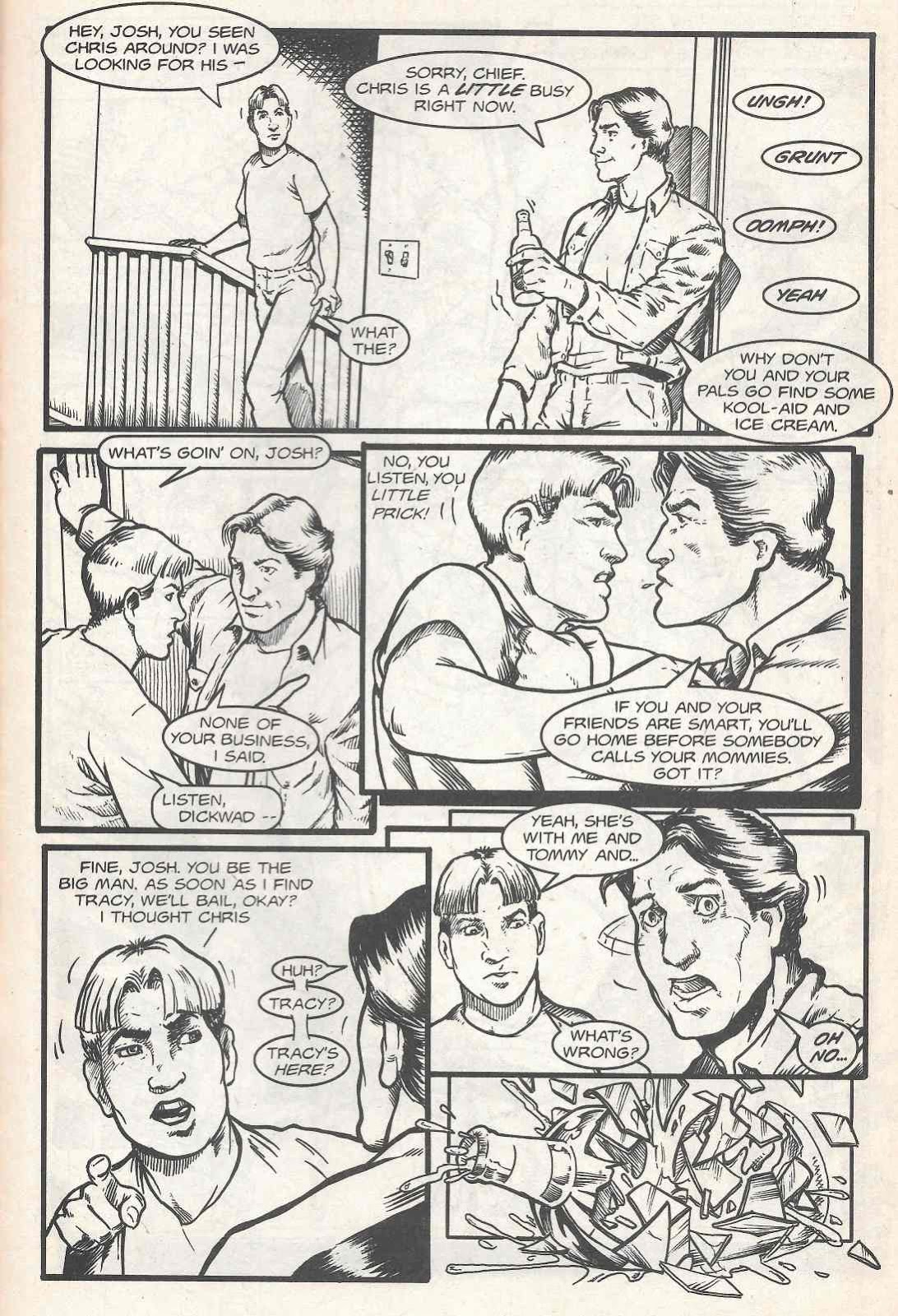 Which doesn’t really make this more horrific, Chris is still a dick who deserves to die. I mean every woman deserves respect and NOT to be raped because she got too drunk, so not certain what Monks is going for here if he’s stating it is okay to rape a chick, just not your kid sister. 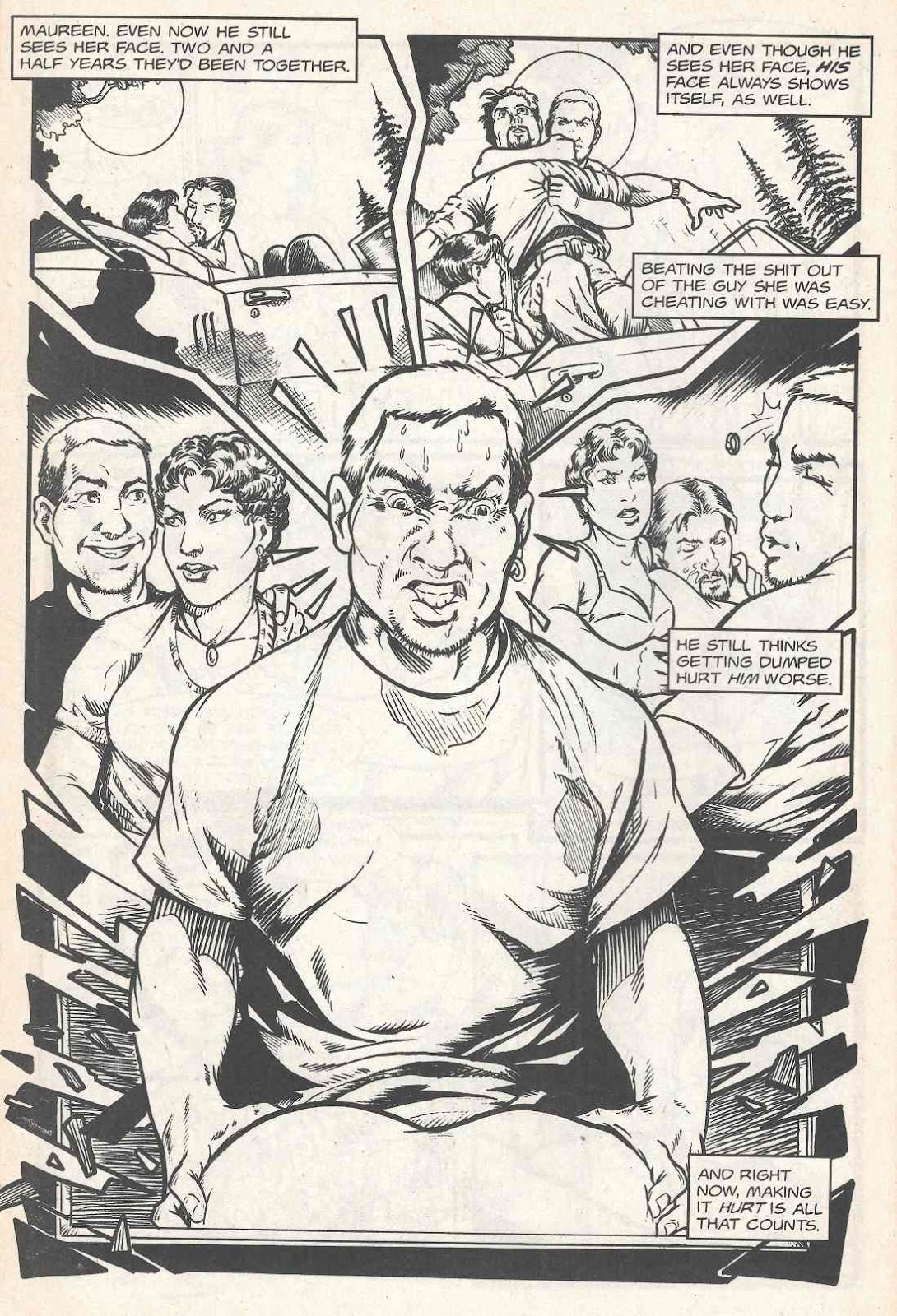 Then Chris pulls his kid sister back into the room and is mortified by what he’s done. Because if it hadn’t been his kid sister…what? He would have been fine with his actions? She asked for it by being unconscious? He would have no moral qualms if it was someone ELSE's kid sister? Dumb twist. Dumb plot. Dumb story. 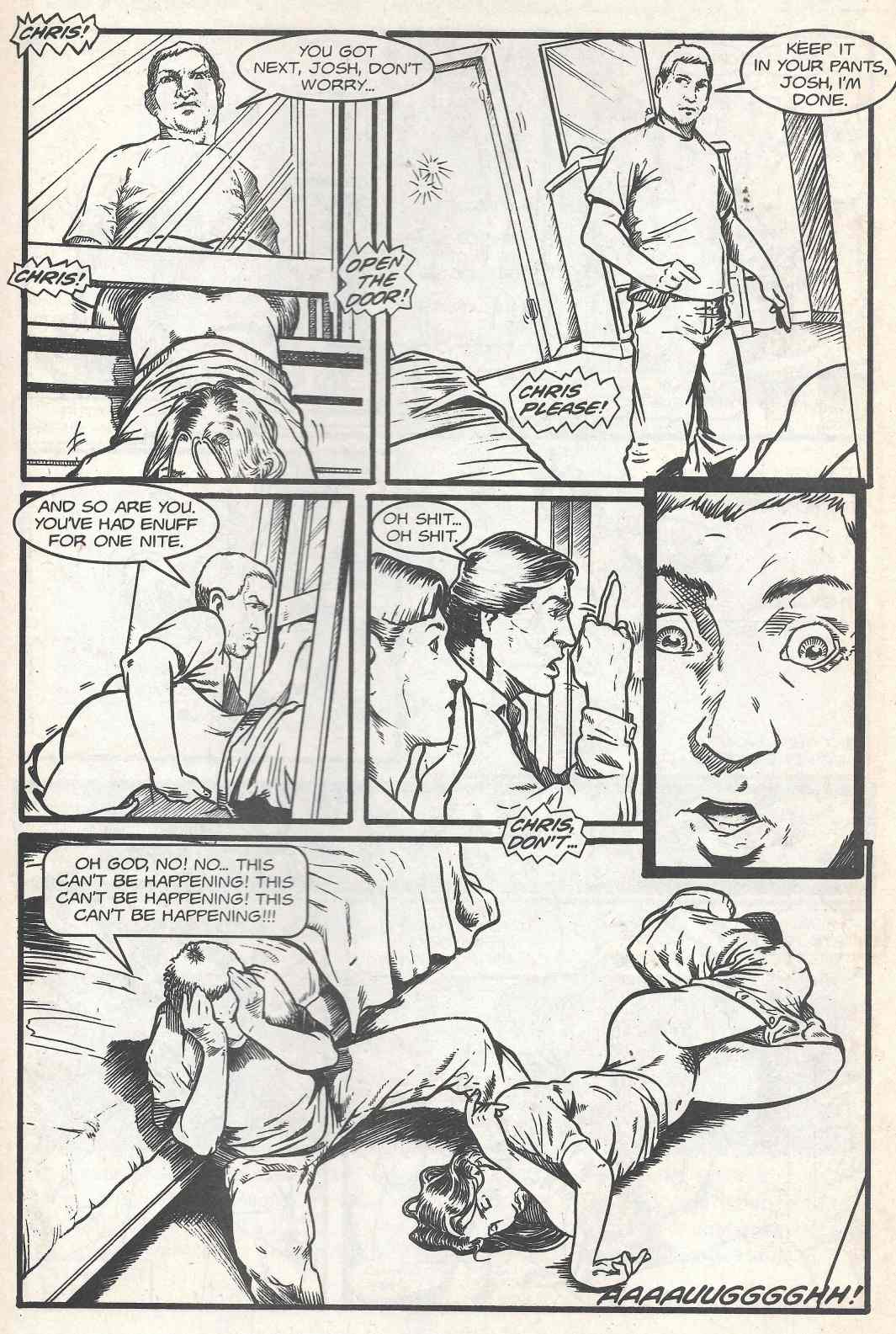 But it causes Chris to jump out the window to his…death? From the second floor? Not sure that will kill a guy but in this case I TOTALLY HOPE IT DOES. 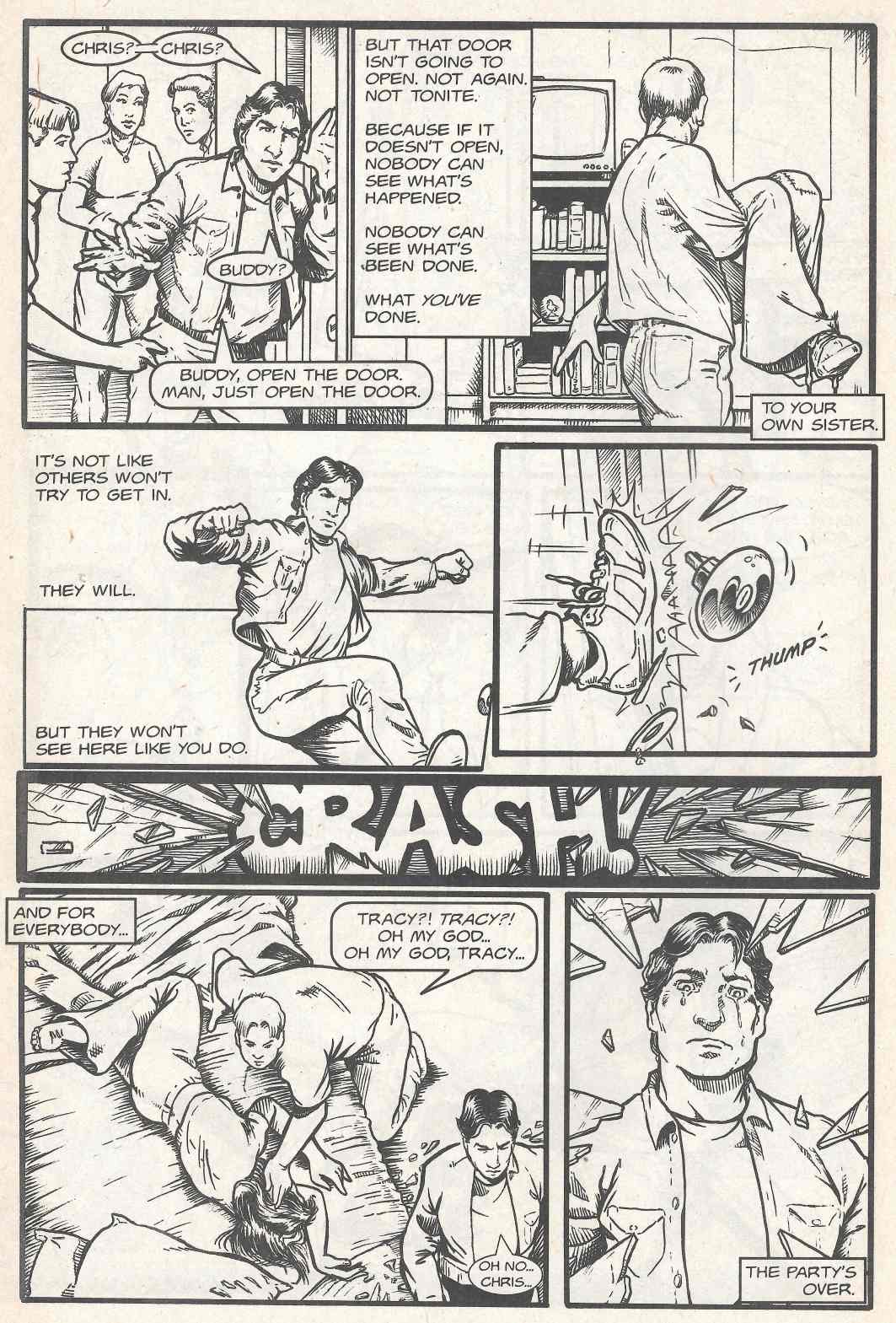 Not a good story. Not in the least. It makes all the wrong points and is shocking just to shock. Also morally bankrupt. A drunk girl at a party is still a person, Monks. Let your hero be eat up with his disgust at his actions, not just because it was his kid sister.

Night Terrors didn’t get a second issue. In fact, Chanting Monks didn’t do much in the way of continuing books. Given that I wasn’t impressed with Monks’ tales, I’ll stick with following the other talent in the book. They are better bets.
Posted by SonOfCthulhu at 6:02 AM