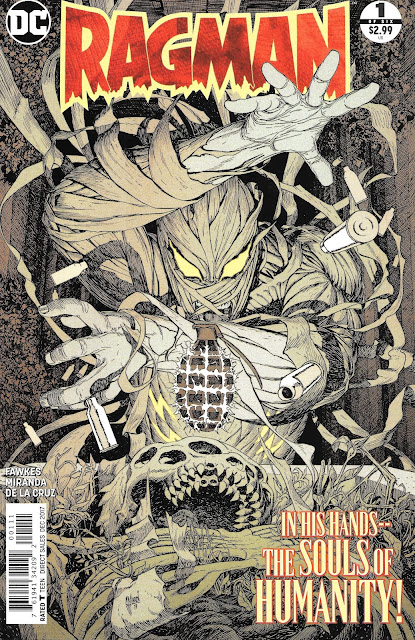 I miss the old Ragman already

My history with Ragman begins and ends with Day of Vengence / Shadowpact. I didn’t know the pre-Crisis Rory Regan at all, which is both bad and good. Bad in that I didn’t realize how altered he had been from his prior incarnation. The original Ragman was an Irish son who gained the strength, agility, and skills of the three thugs who murdered his father whenever he put on a costume his father purchased.

Nope. My Rory was the Jewish post-Crisis Ragman, whose costume was made of the souls of evil men. Each rag equated to one soul that the costume had absorbed. Rory could draw upon and use their strength alone or in groups, with the amount he took from them equating to penance for the evil that soul had done while they were alive. If he drew too much from one soul, it would find its “karma” balanced and would disappear.

I frankly LOVED this interpretation of the character. It held equal parts of avenging angel and as a person tormented by persecuting the evil souls the suit contained. Lots of depth to him.

But the current version of Ragman may be my least favorite. Mainly because he has a Spawn-like feel about him and I’m not a fan of Spawn. You’ll see what I mean in just a bit.

We start off the first issue six months in the past as a group of mercenaries are robbing a lost historic site. Already I have problems with this because I know one of these jokers is going to end up being Rory. That’s something consistent about prior incarnations of the character, he isn’t a criminal. But here you can feel the Spawn vibes starting, so Rory is now a willing participant in a crime and shows no remorse at needing to take lives if necessary. 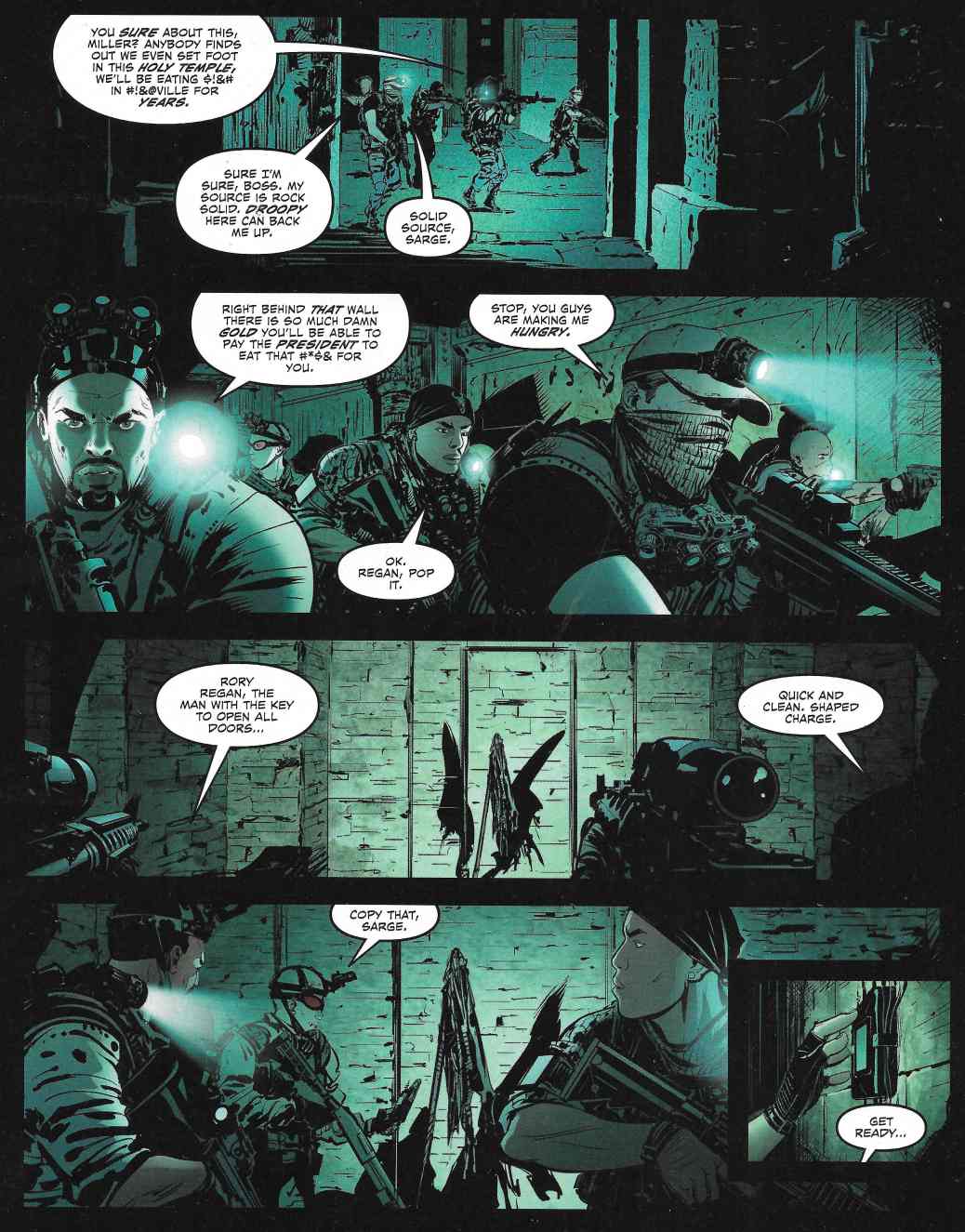 Turn the page and we have skipped ahead six months and moved over a continent. We land in Gotham City, in the now, with a Rory who is suffering from PTSD and a member of a neighborhood veteran’s group. Listening to another soldier’s imaginings seems to strike a cord with Rory. Something about seeing monsters with light-up eyes… 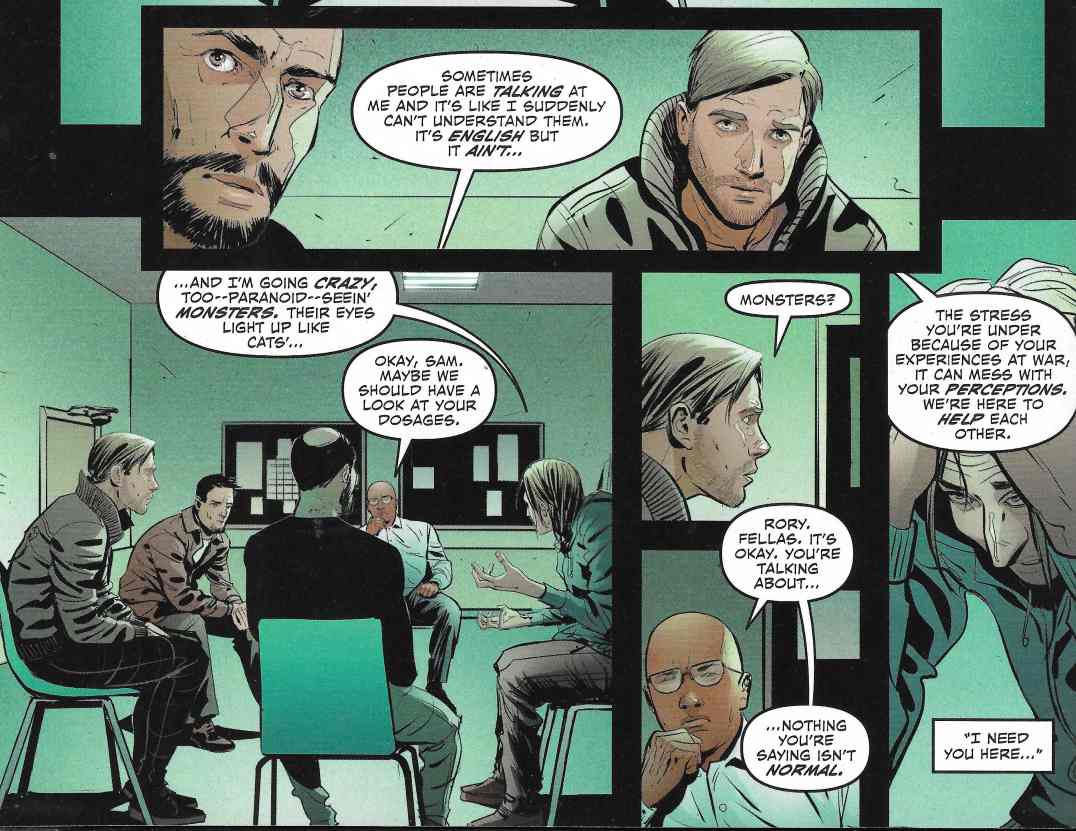 Get ready for the whiplash! Because for a bit we will be jumping back and forth between the past and the present without any preamble. Page three we are back six months ago, this time after our explosive expert Rory has knocked down one wall in the holy temple…only to find there is another in need of knocking down right behind it. 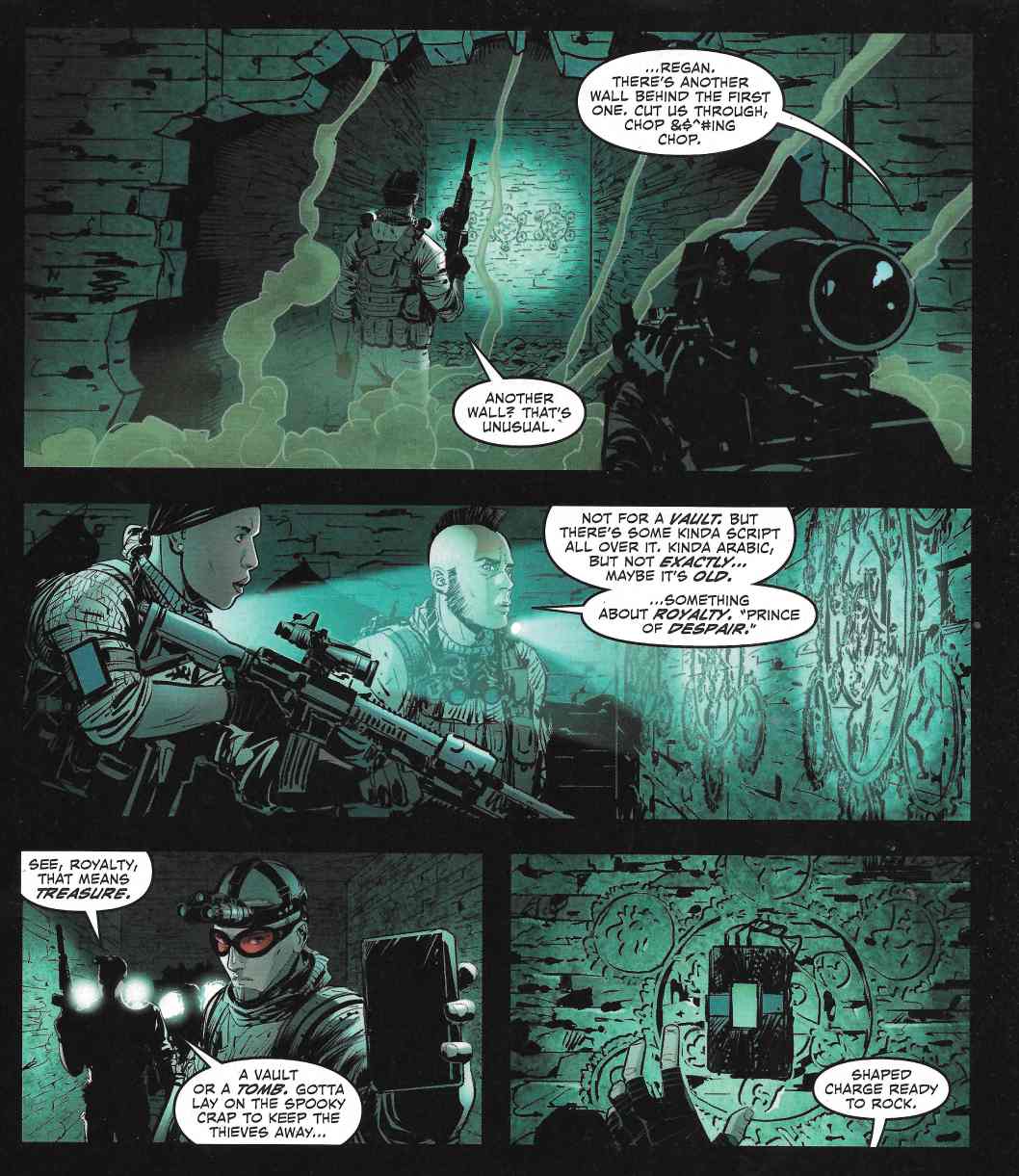 We get it. Whatever is sealed up in there was meant to be sealed up for all time. Our characters (who live in a world of flying aliens, magical demons, and menaces from other dimensions) for some inexplicable reason don’t.

What that second vault hides is a box about the size and shape of a casket covered in spooky ruins. At this point every person in the audience is saying “Don’t open the box!” Our mercenaries must not be listening. We do pick up that Rory is nicknamed “twig” and that he’s treated like the weakest of all these guys. 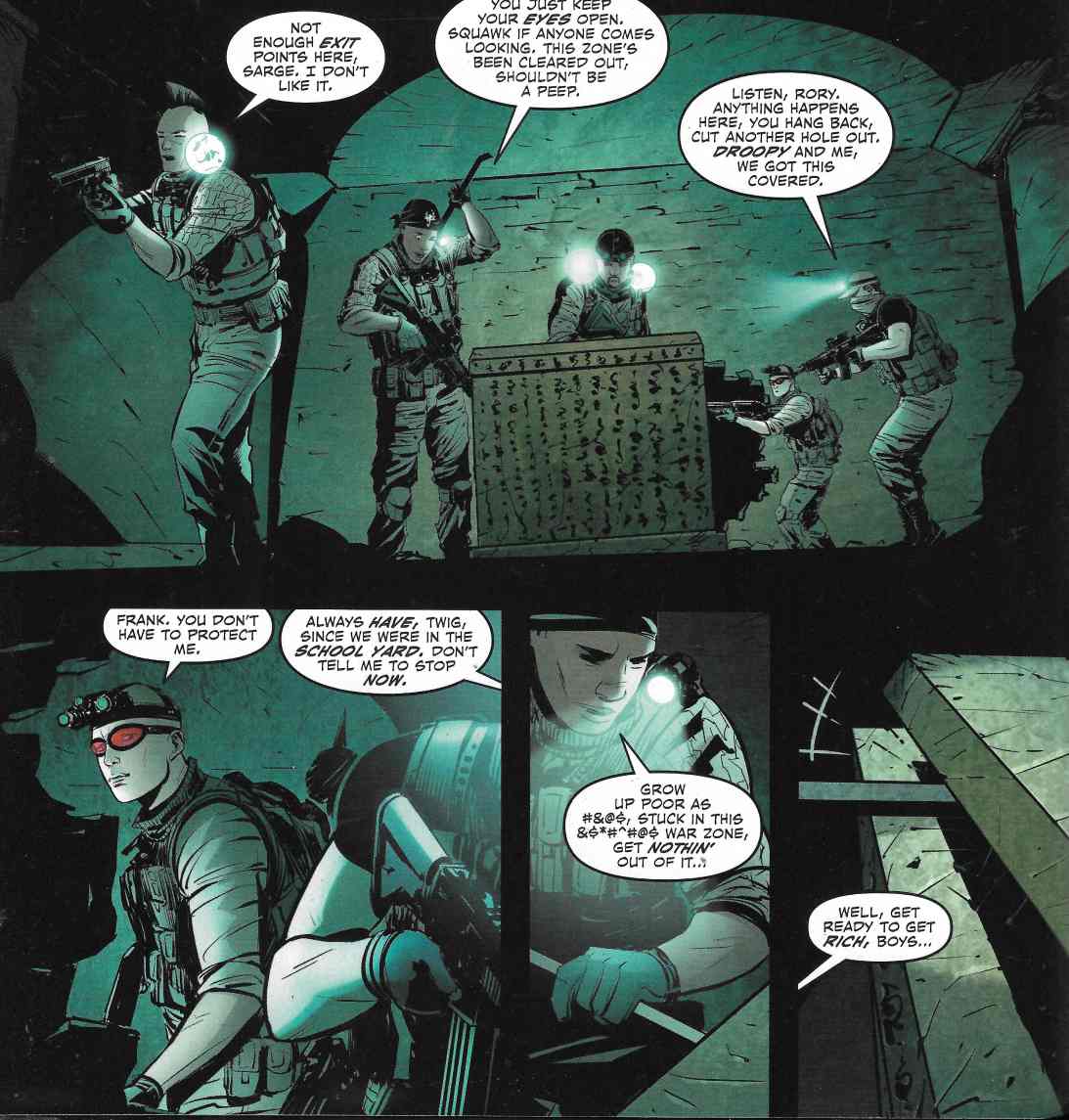 As soon as his companions pop the latch on that sarcophagus, all heck breaks loose. First off it appears not to contain gold at all, but some unmentionable…something. Secondly, they get movement coming in to the temple by another fire team. And that second fire team isn’t friendly. Rory is asked to cut another hole out of the chamber so they can escape, but his next shaped charge is a dud leading to… 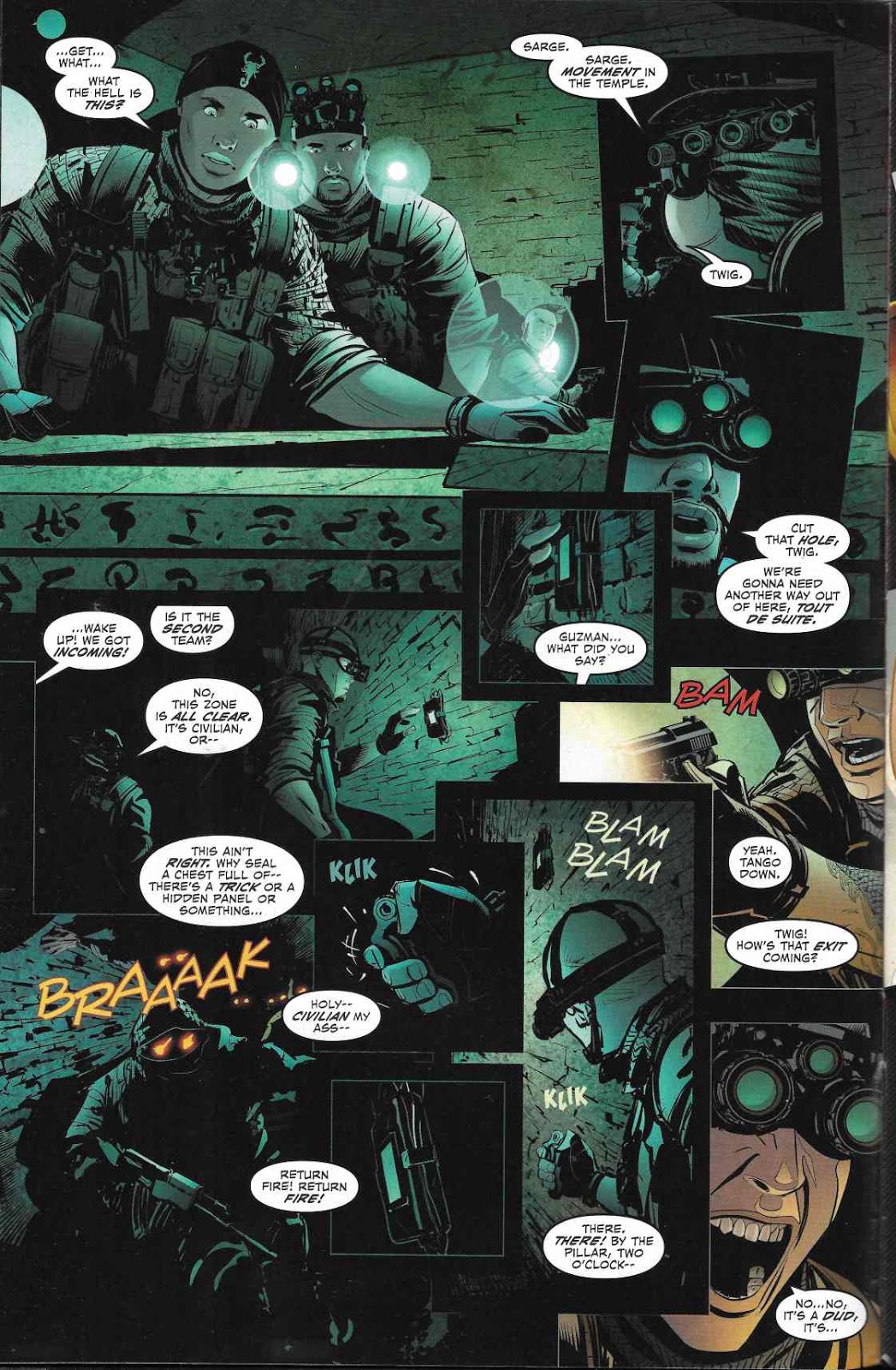 …the end of the flashback and the return to the present day. Here we have Rory going home to the apartment he shares with his father above the antique shop his dad owns, “Rags and Tatters.” This is one of the few linking pieces back to Ragman’s history, so I know its inclusion is perfunctory even if it no longer holds any significance to Rory obtaining the Ragman suit or powers. 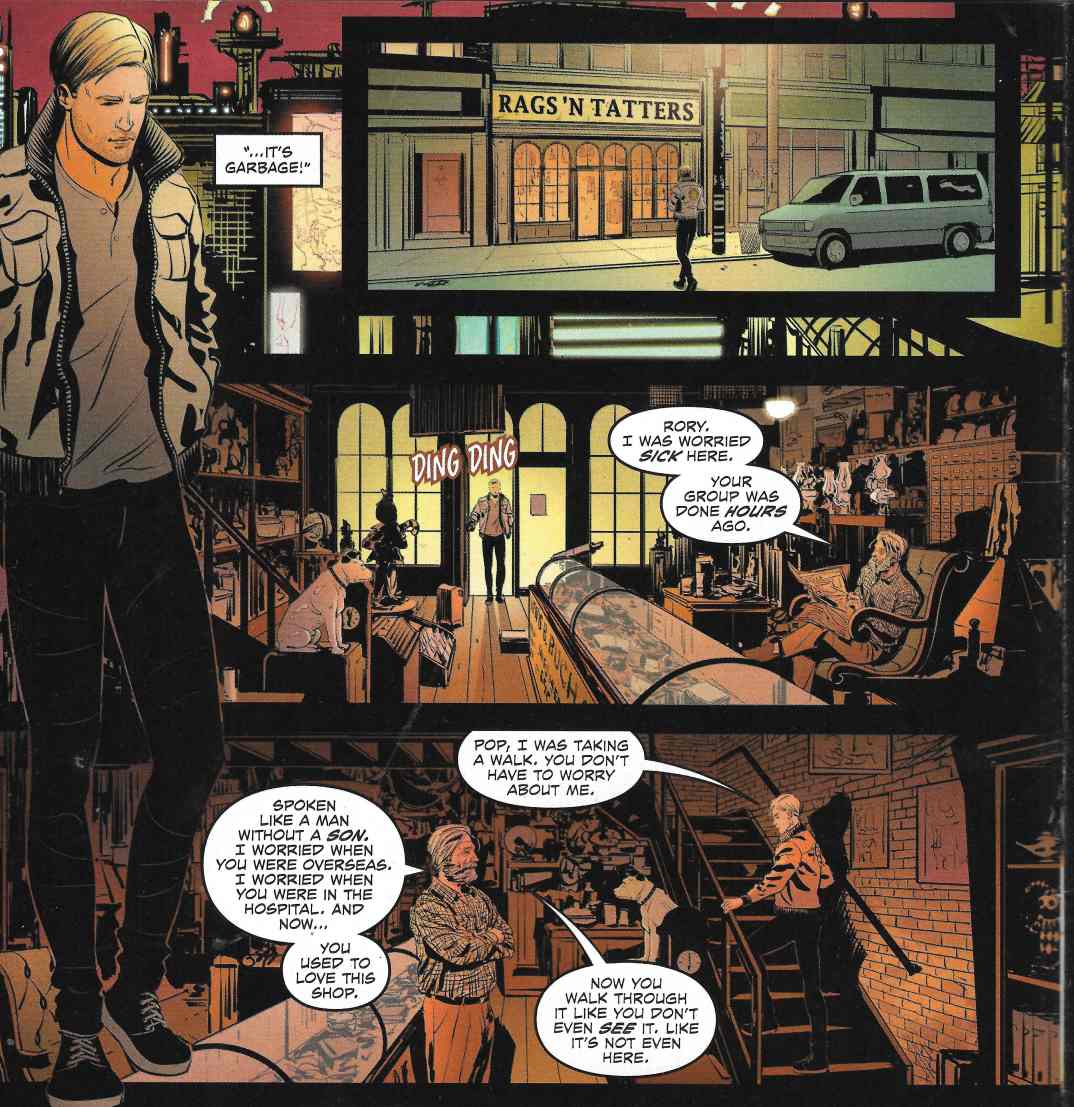 Next we move on to Rory meeting with the wife of one the men who got killed in the tomb with him six months ago. Feels a bit like the book is setting her up to be a love interest for Rory while also segueing into finishing up that flashback. 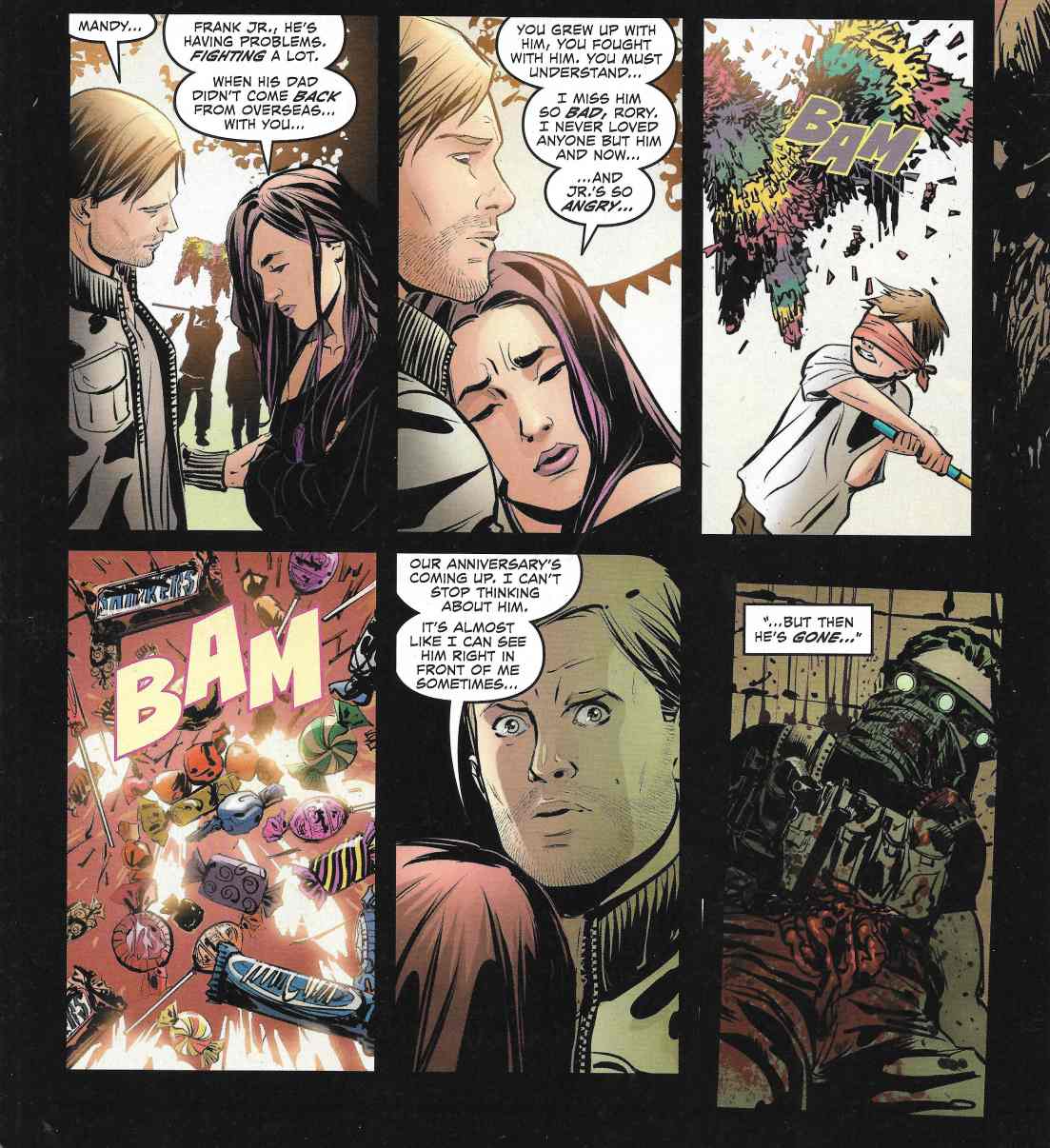 Or at least this full page PTSD trip that captures a good amount of atmosphere. 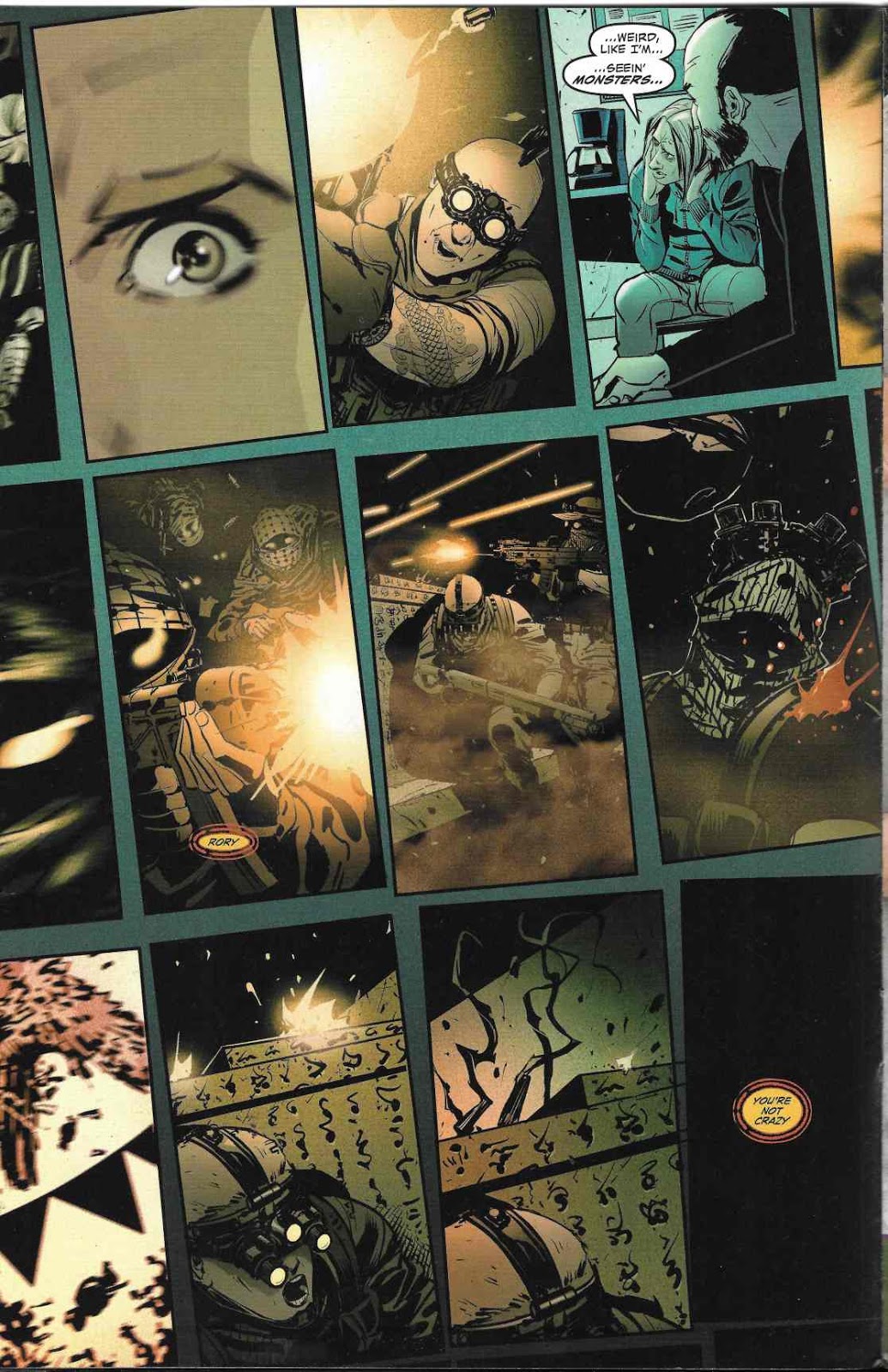 Unfortunately, it does little to wrap up the mystery of what happened in the tomb and that part of the tale is beginning to feel a bit played out. We know this is where Rory gets his Ragman powers, whatever they will end up being in this post-New 52 universe, and dragging out this bit for the length of the book is kind of silly.

But here we end up back at the second floor above Rags and Tatters as Rory tries to jog his memory of what happened that fateful day in the tomb and tries to solve the mystery of the people with glowing eyes. 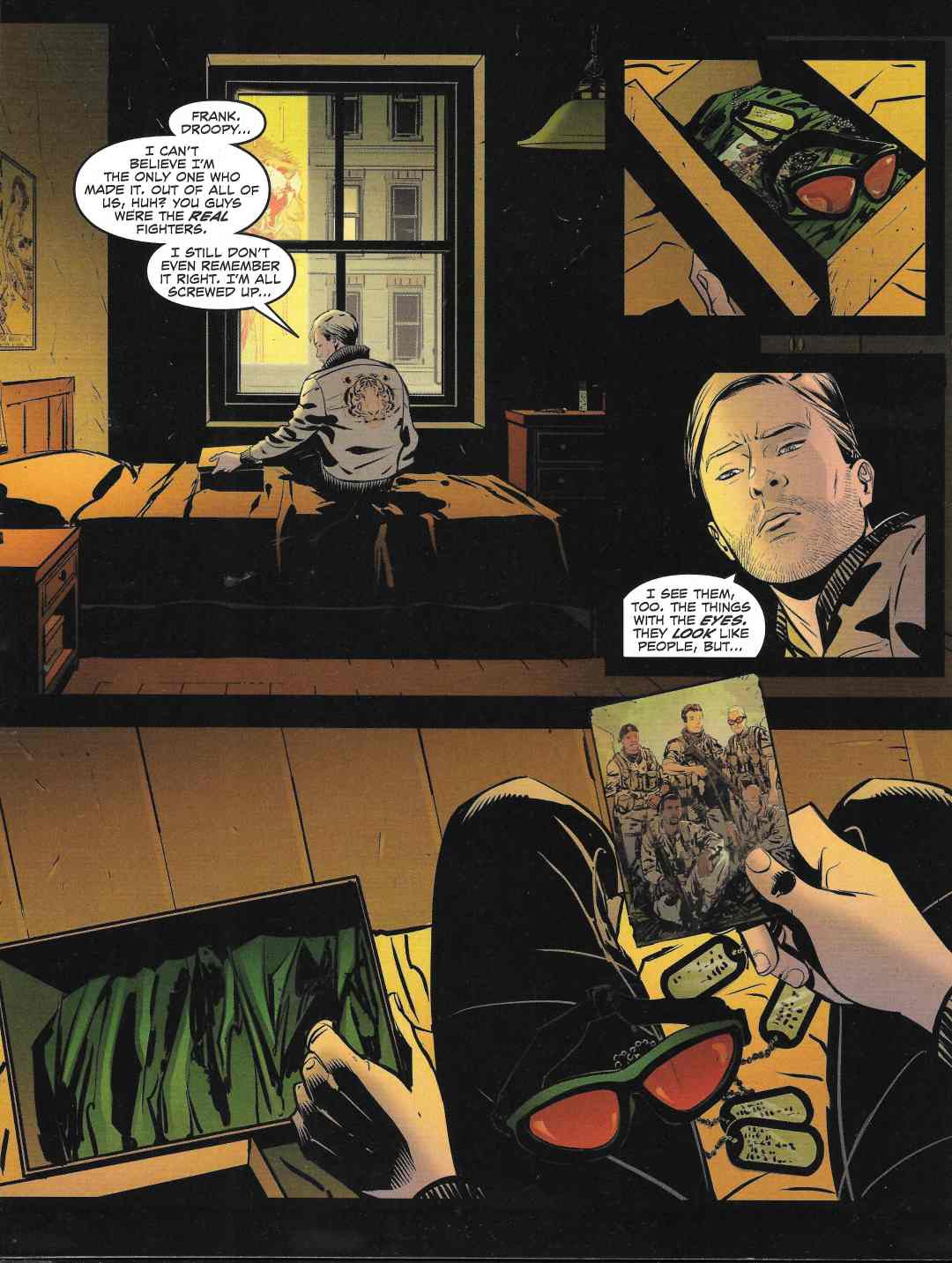 Appears they are all around him in Gotham, almost as if they are following him, which of course they are because this is obviously tied into the Ragman power set now. And given that we are discussing the Ragman power set, it finally makes an appearance by speaking to Rory and covering his body in Venom/Spawn goop. 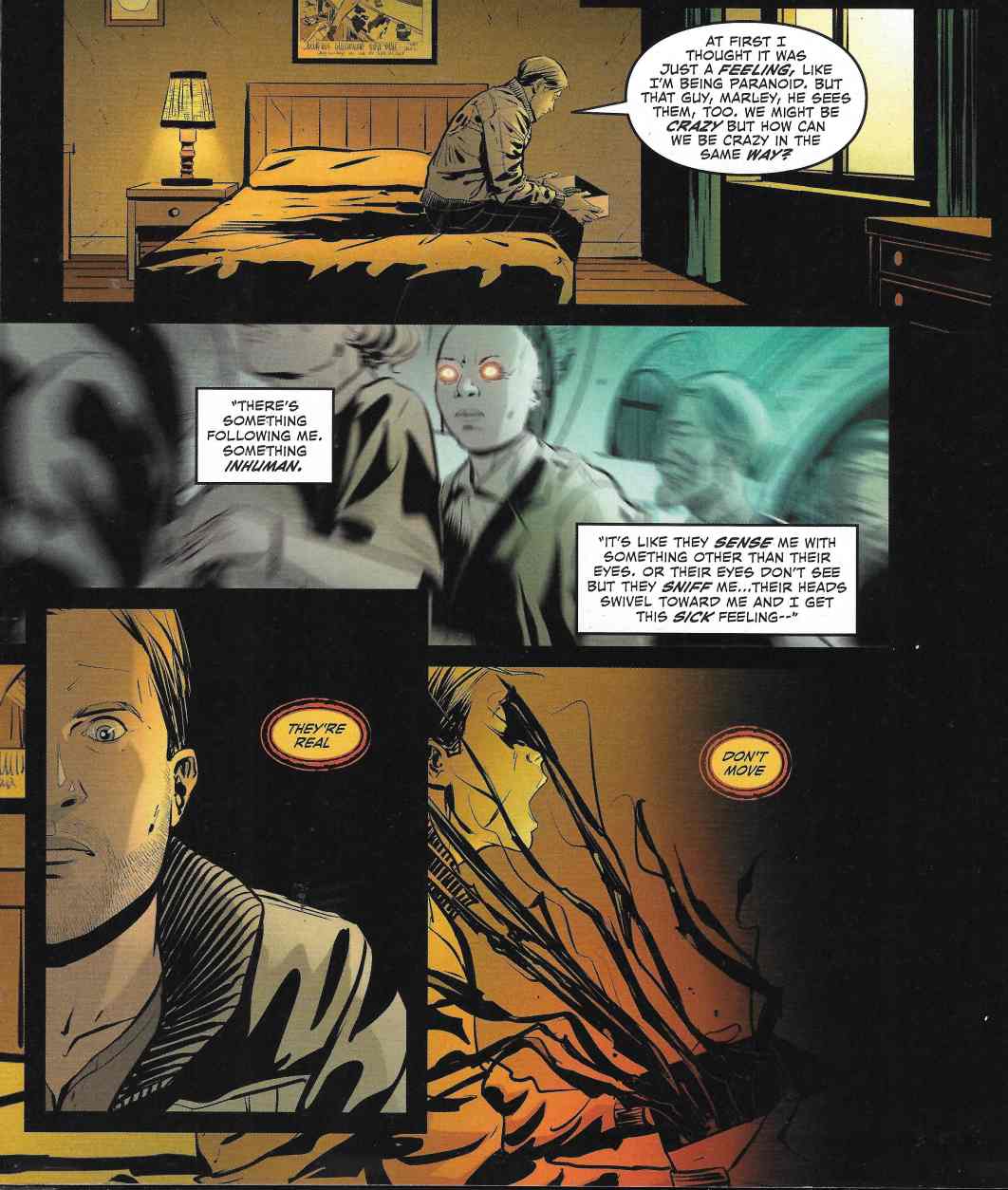 Next thing we know, Rory is suspended above the city in a nasty cocoon and it DOES feel very Spawn-like. He is disoriented and follows the voices in his head to battle some glowing eyed demons. 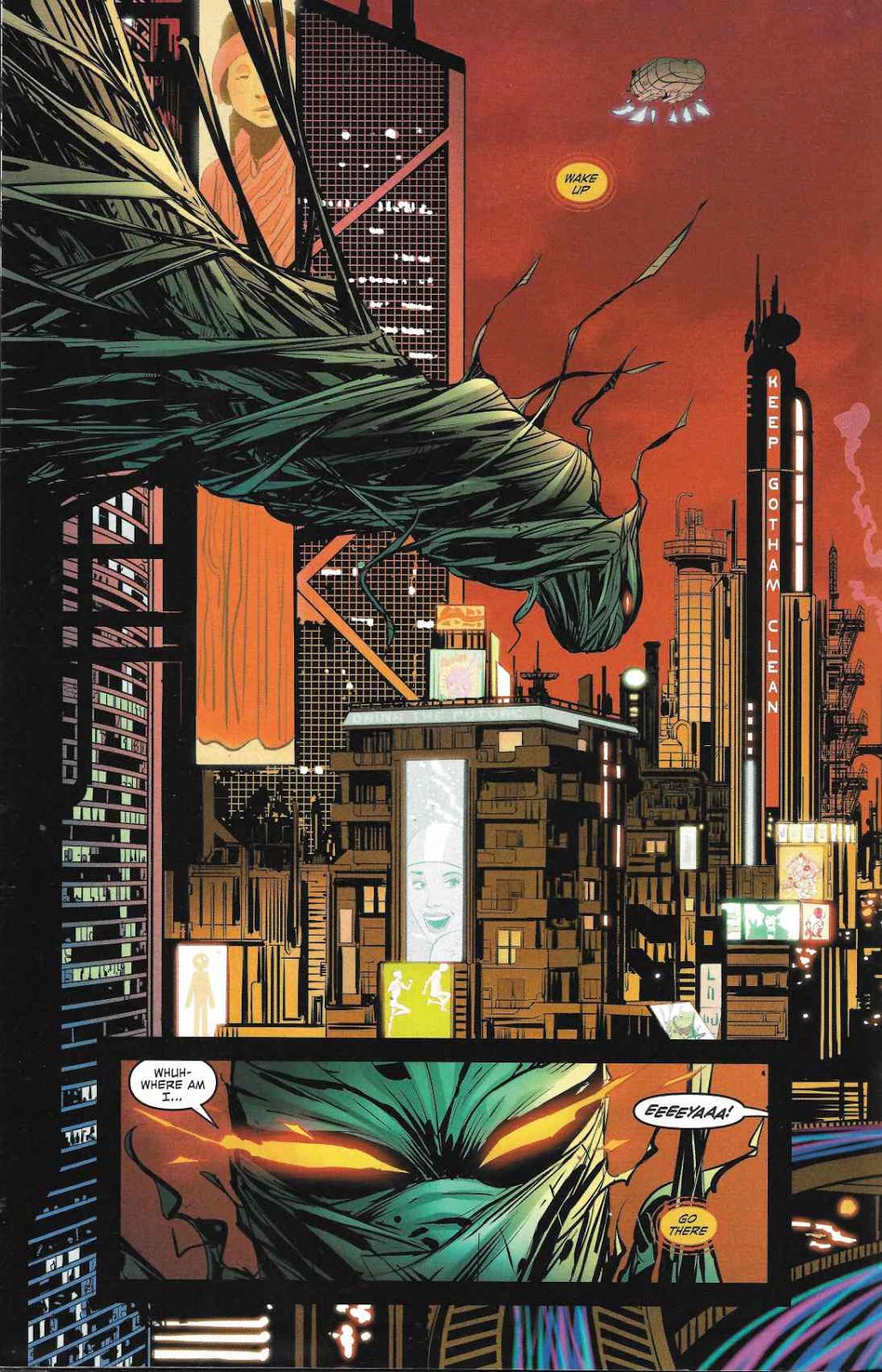 The demon appears to be torturing someone asking if they are “not ragged?”, which I take to mean that these creatures can’t tell who has the Ragman powers and who doesn’t. Rory intervenes but plays it dumb, still not connecting the dots. (Dude! You have superpowers after a mysterious event in your past involving things just like this. Why do writers continually make our heroes dumber than we the readers?) 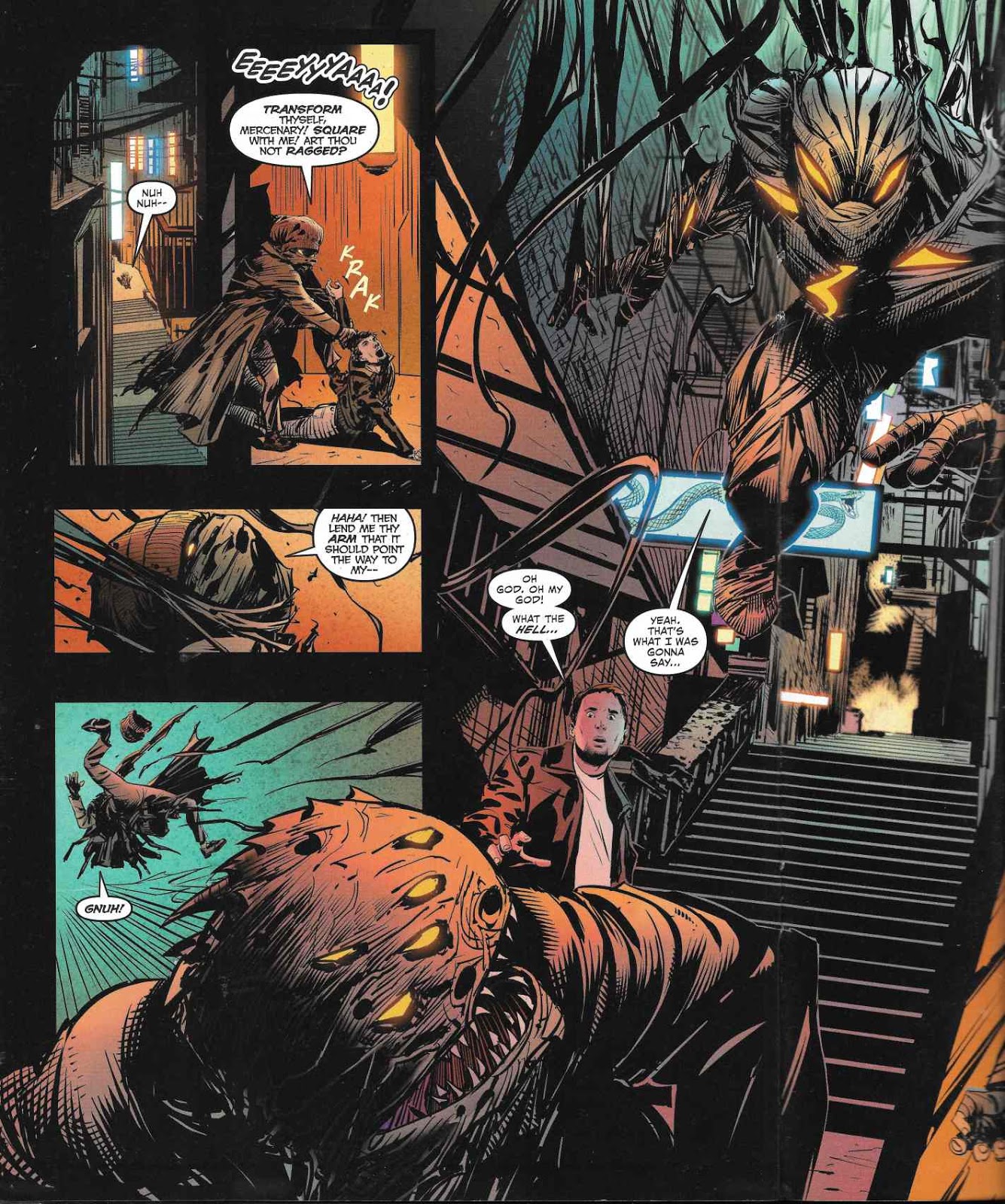 But connecting the dots or not, he beats the demon into submission and then the suit absorbs him before Rory can extract the full measure of answers for him to “get” what is going on. 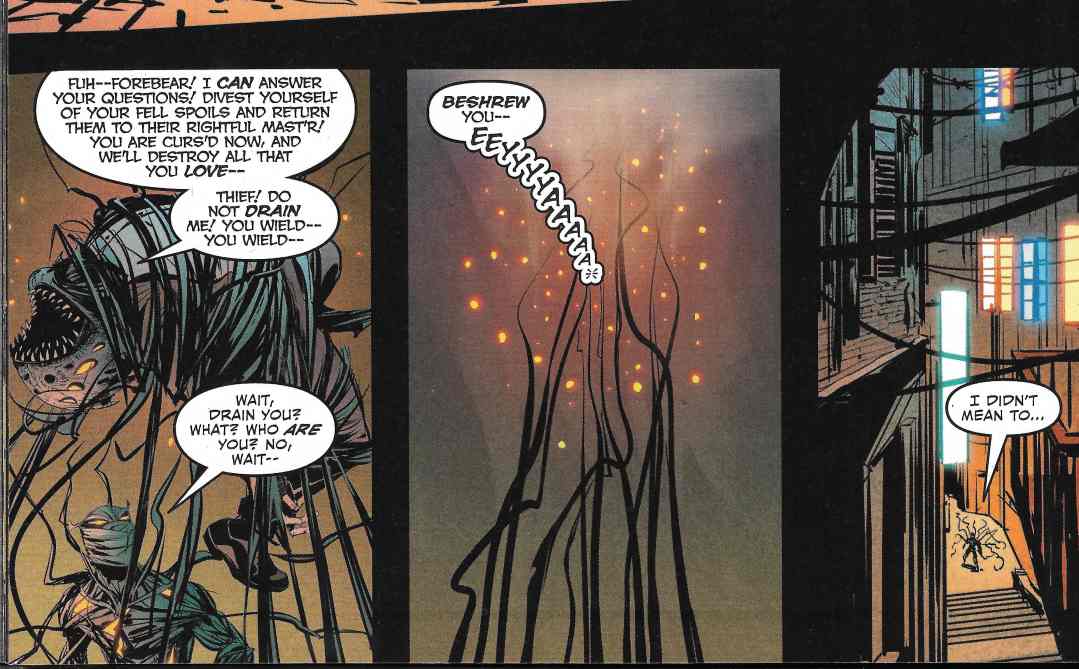 Rory asks the suit to get him out of there, which would work better if it just took off with him instead of him verbally requesting it. This way it makes the suit a “person” who Rory has to deal with instead of an instrument that he controls even if involuntarily. As he goes, his dead troopmates start speaking with him, filling in the gaps and forcing him to remember what happened in the holy shrine. 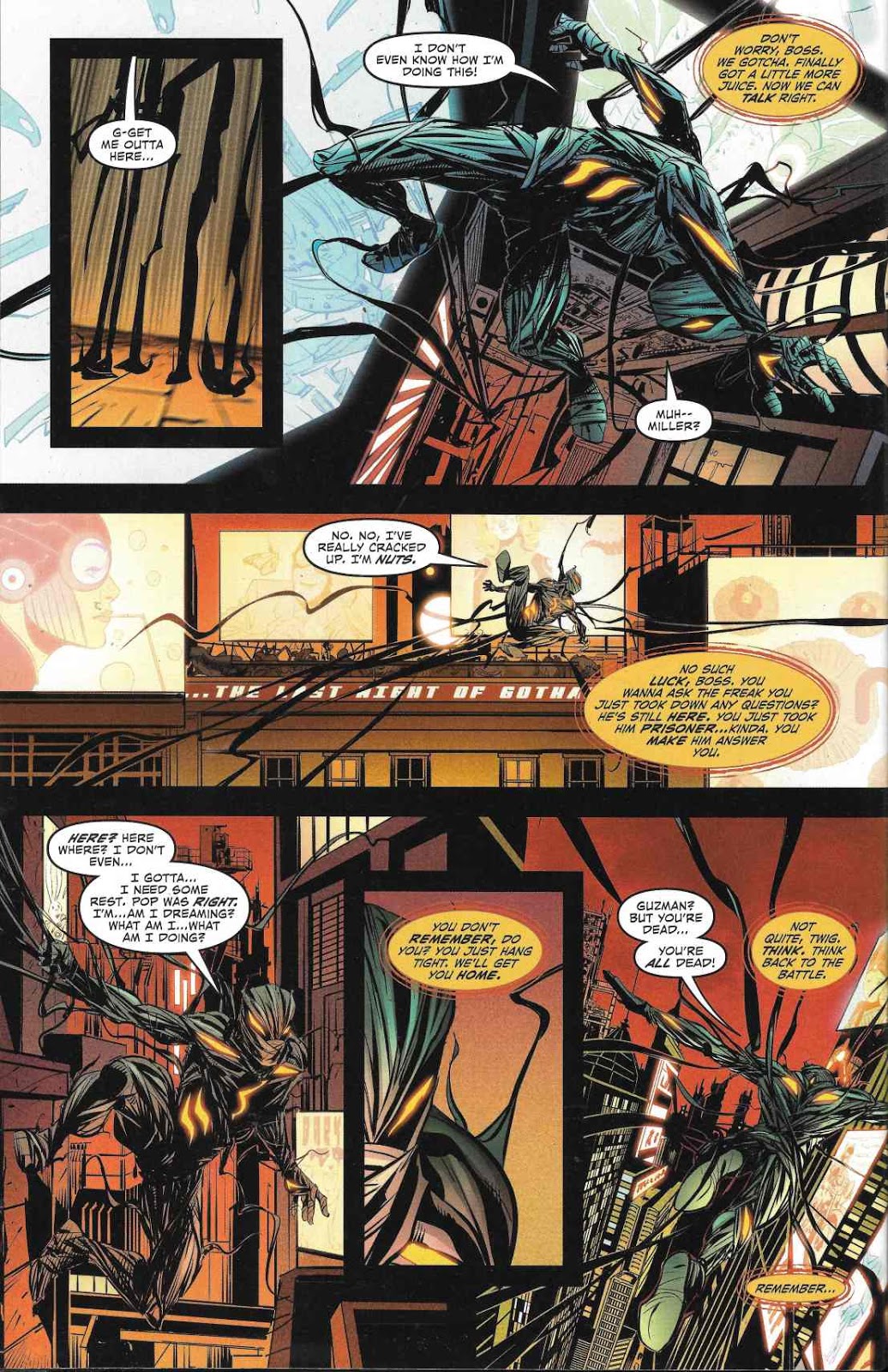 Which is basically this: glowy-eyed unkillable creeps pinned them in the tomb seeking the contents of the crypt. His buds filled them full of holes. The creeps stood back up and killed all his friends. 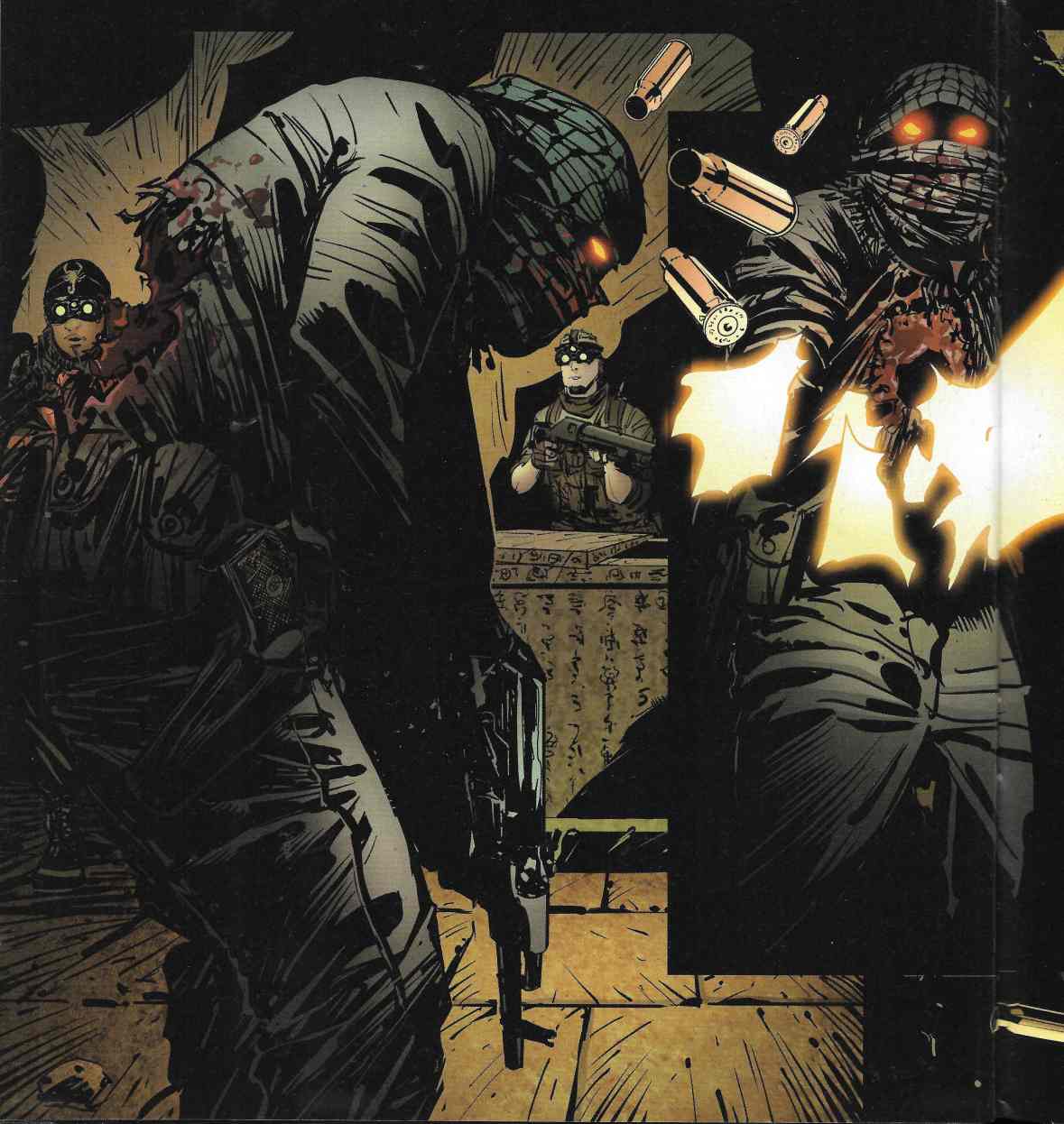 Rory stood up to take on the creeps. A grenade and the rag-thing in the crypt got involved and now we are at six months later. His specter companions promise him answers once he gets inside Rags and Tatters… …but that ain’t happening as his Dad’s shop goes up in a ball of Boom! 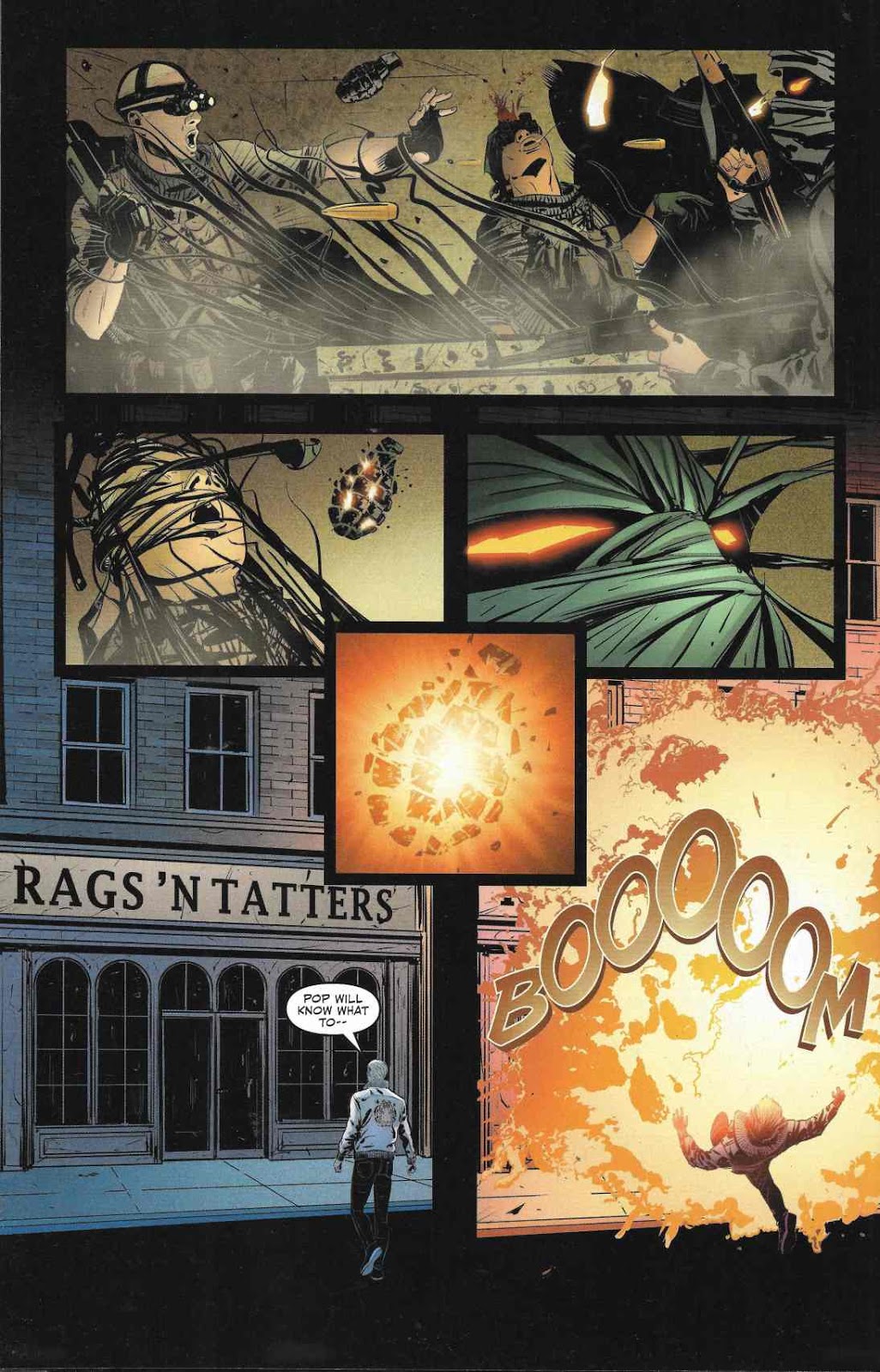 The shiny-eyed demons have toasted the shop and are holding the prone form of Rory’s dad. Next issue will be the start of a dust up, it appears. 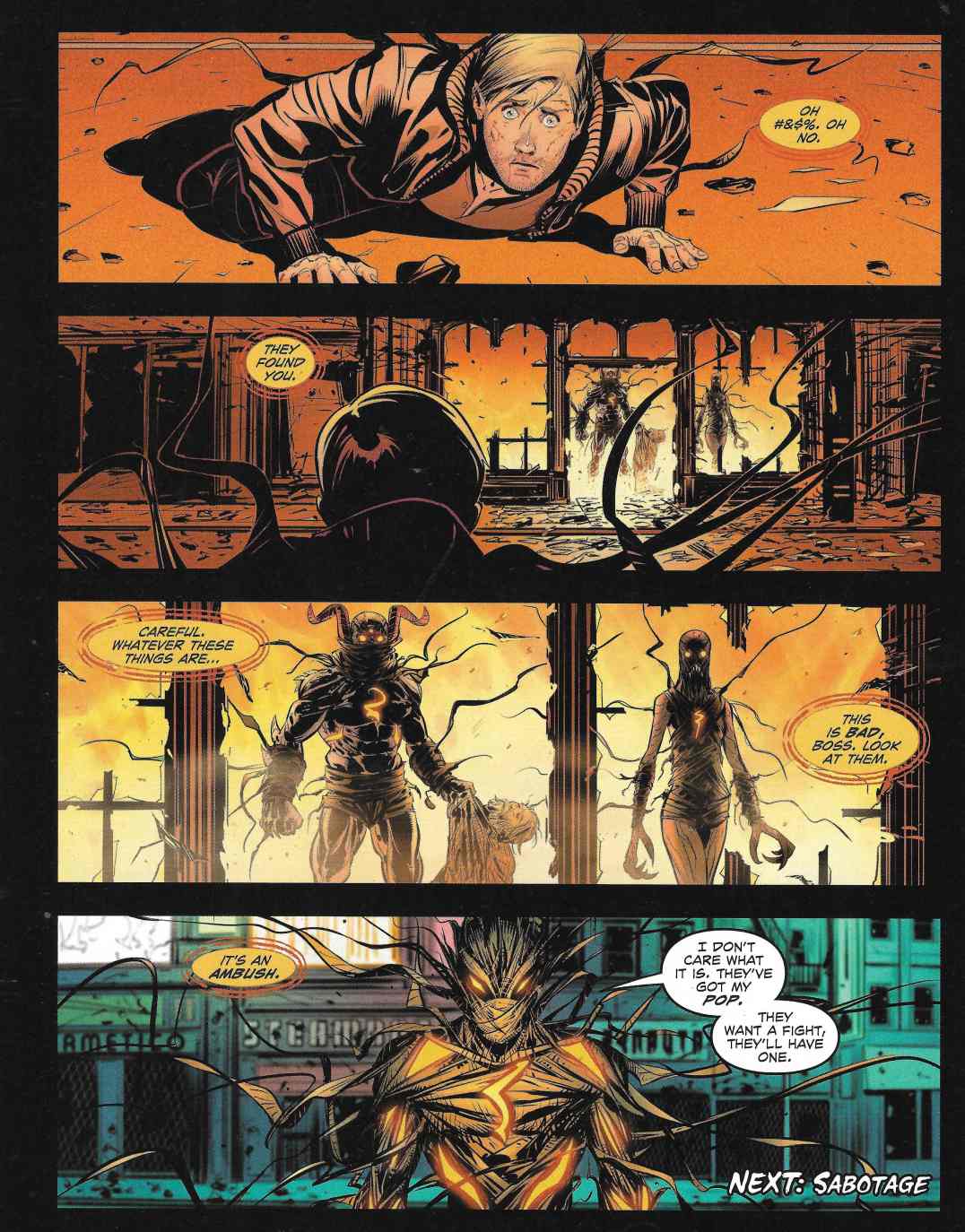 I enjoyed the idea that Ragman took the souls of corrupt and evil men. The twisted way he would use their powers to both fight evil and to redeem their own bad deeds seemed a novel concept. But this version turns all that on its head. Some of these souls in the current version appear to be pure evil and thus should have no redemption coming. And we know that his buddies were tempted by greed into breaking into the tomb and willing to murder to keep their ill-gotten loot, something that taints Rory too. I liked the prior version of a regular Joe who had to carry the burden of being the judge, jury, and executioner to the criminals he absorbs.

In short, bring back the old Ragman.
Posted by SonOfCthulhu at 3:09 PM