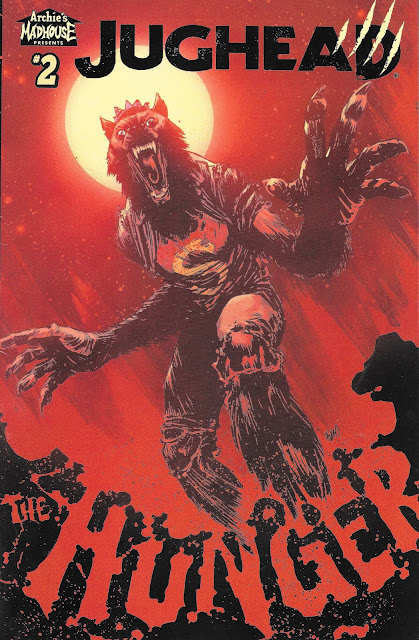 We all know “Were” this is going

Having struck gold with Afterlife with Archie(2013) and The Chilling Adventures of Sabrina(2014), Archie publishing decided to setup the Archie Horror/Archie’s Madhouse imprint and produce a one-shot werewolf tale called Jughead: The Hunger in March of 2017. Strong sales lead to the announcement of an ongoing in July and by October of that same year Archie was churning out the fur and fangs.

When I scooped this out of the Half-Price bin I had high hopes. Both of the prior Archie Horror titles had worked amazingly well. Taking little bits of the familiar Archie universe and twist them in macabre, violent tales of terror turned out to be just the right mix to make my neck hairs stand on end.

It is with a heavy heart that I admit that Jughead’s werewolf adventures didn’t do it for me. Maybe it is coming in an issue late? Maybe it is fatigue at seeing these beloved characters bite it a different way? Maybe I just don’t dig werewolf stories?

I gonna go with none of those. I feel like I gave this issue a fair shake to wow me, but it just didn’t. Let’s jump right in and see if we can uncover why.

We begin with a rock-solid opening idea: Riverdale High principal Mr. Weatherbee is seated at his desk as late evening light shines in from the window. He is bemoaning the past and bringing us up to speed on goings-on in Riverdale. 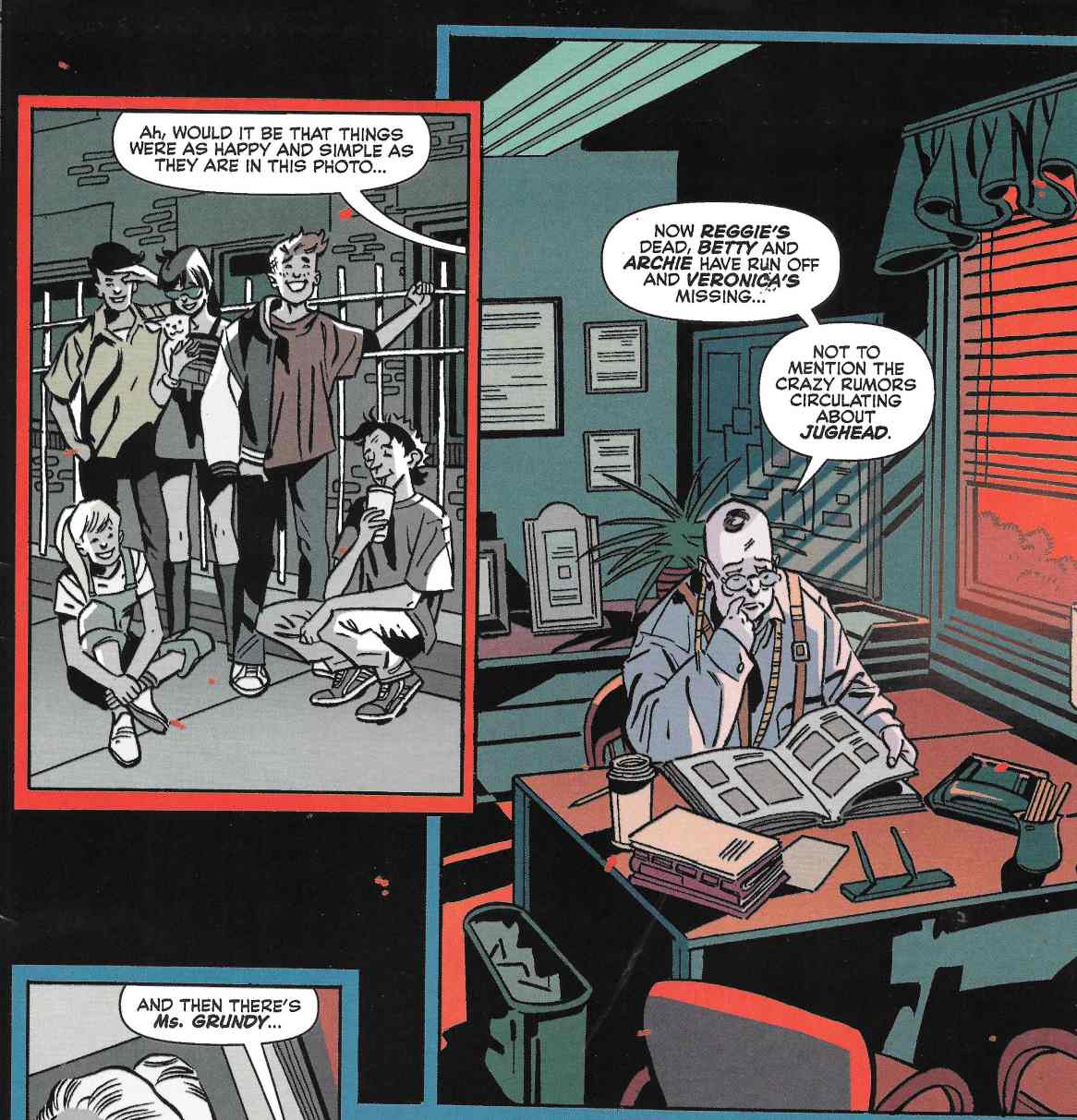 In the frontispiece it states that Jughead’s legendary hunger stemmed from an undiscovered strain of lycanthropy. A discovery that turns dark when it comes to light that the lad is also the infamous serial killer The Riverdale Ripper. This is discovered by Archie and Betty, who come upon Jughead munching on Reggie, who is dead in the first issue. Jughead skips town to avoid being hunted down. Betty and Archie take off with her werewolf-hunting cousins to take care of Jughead permanently.

Unfortunately for Mr. Weatherbee, the hunters have left some unfinished business in Riverdale. 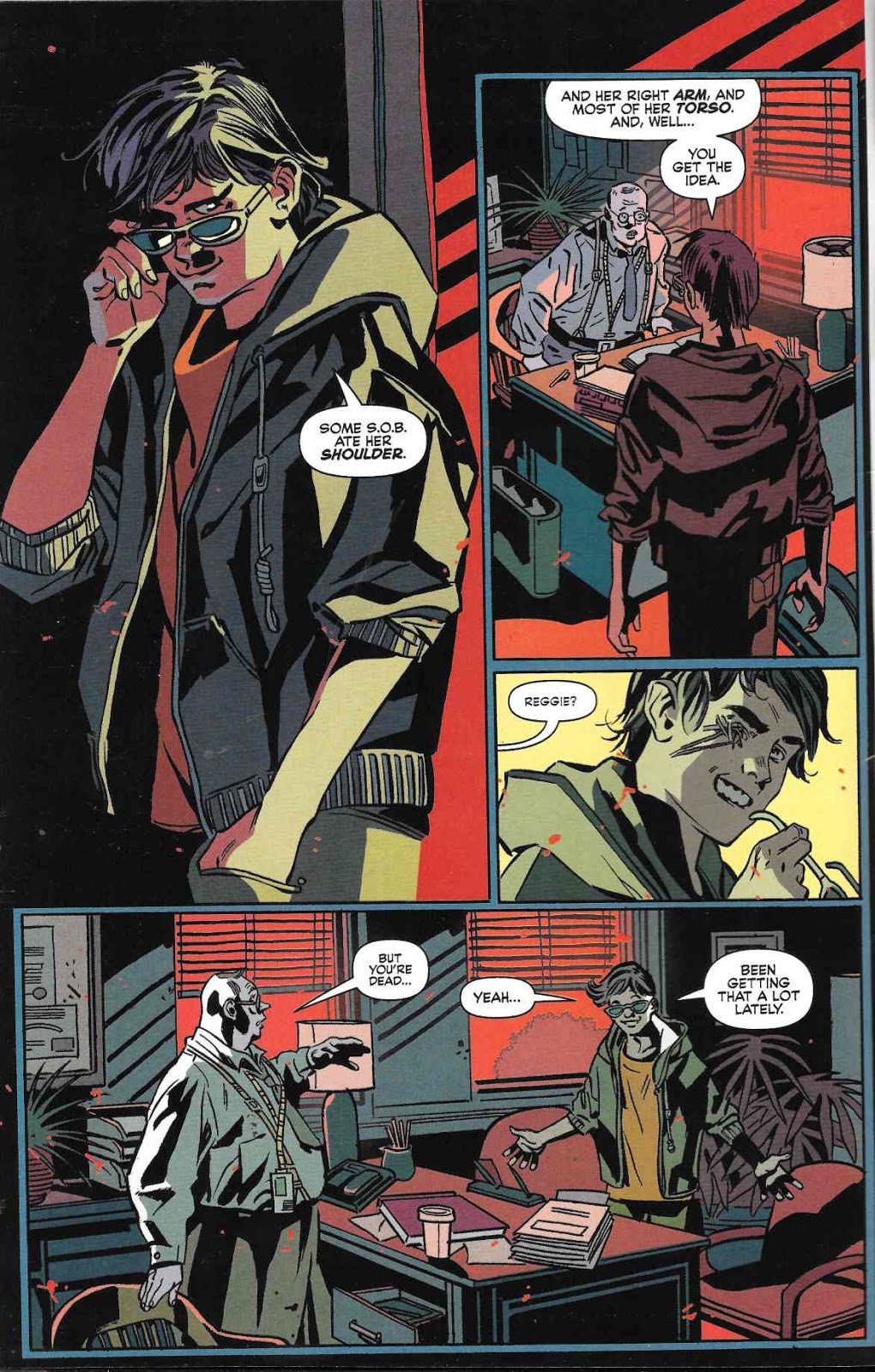 And that business happens to be Reggie himself, who has risen as a werewolf and who also wants revenge on Jughead for his untimely turning. And he is not ashamed of using his new powers to begin creating a wolfpack of his own to do just that. Ms. Grundy was a meal… 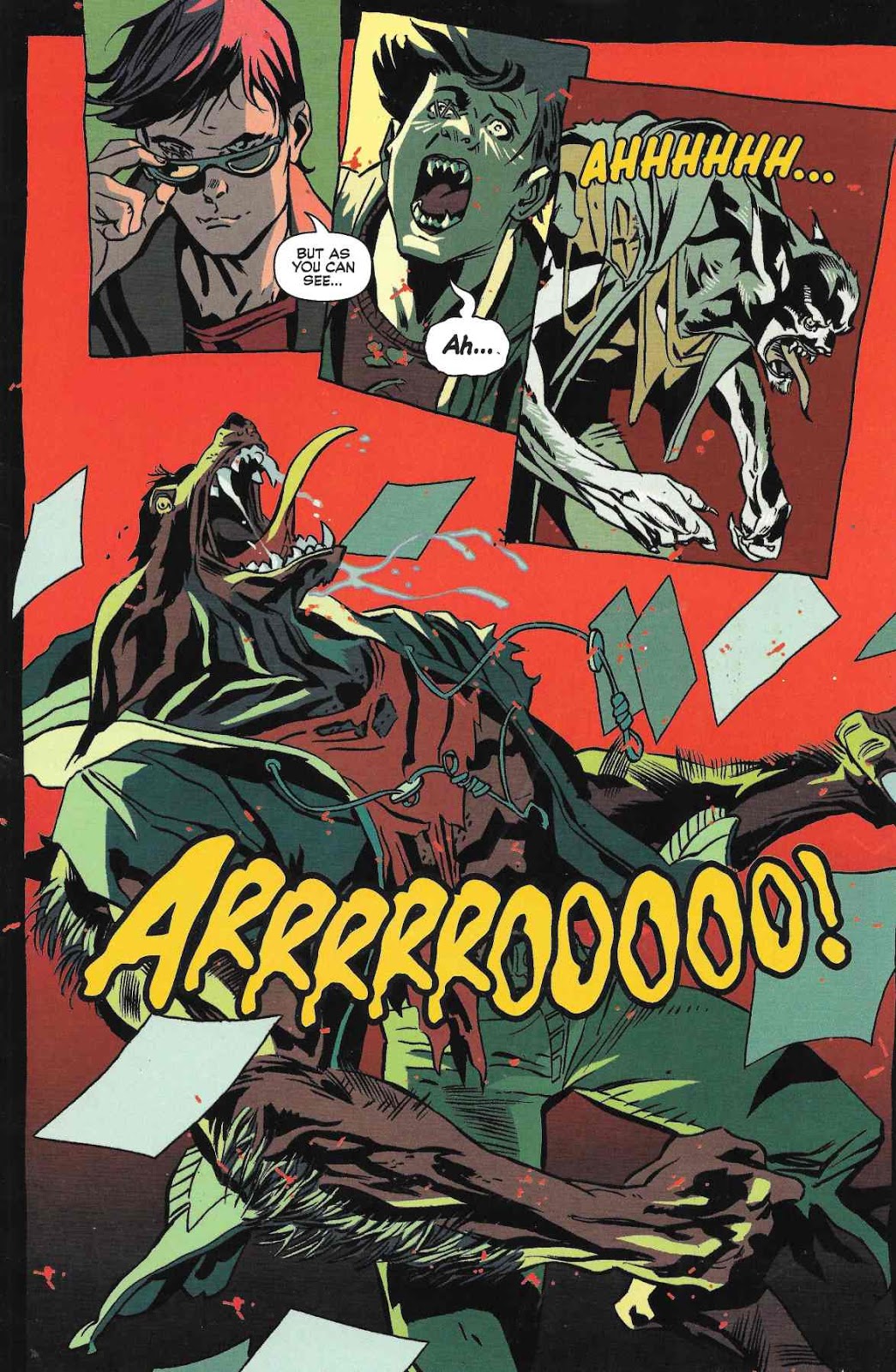 Mr. Weatherbee…turns out to be not so lucky. 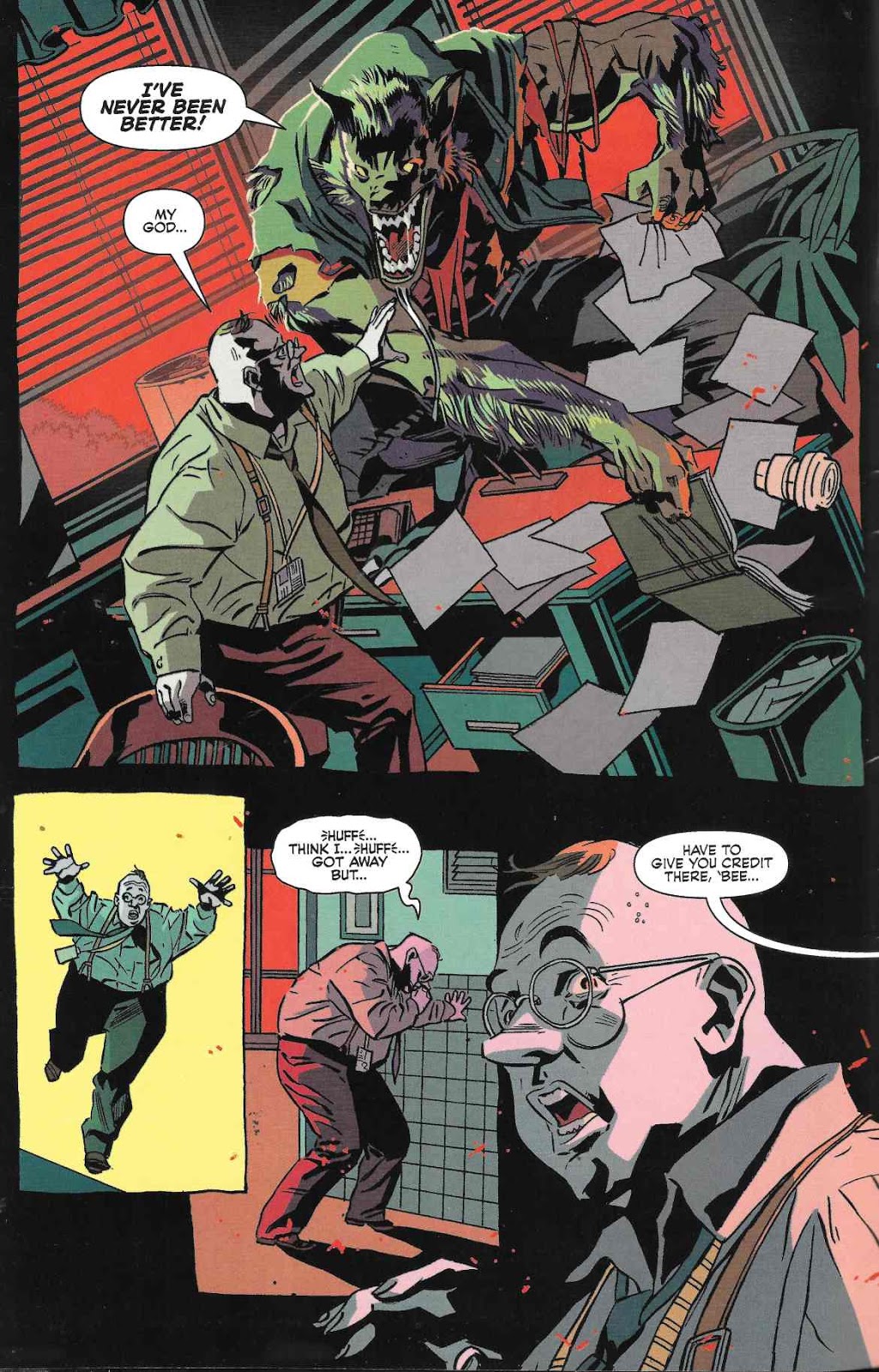 Reggie’s startling transformation terrifies our balding administrator and he flees. Seems his escape is cut off by Reggie’s cohort… 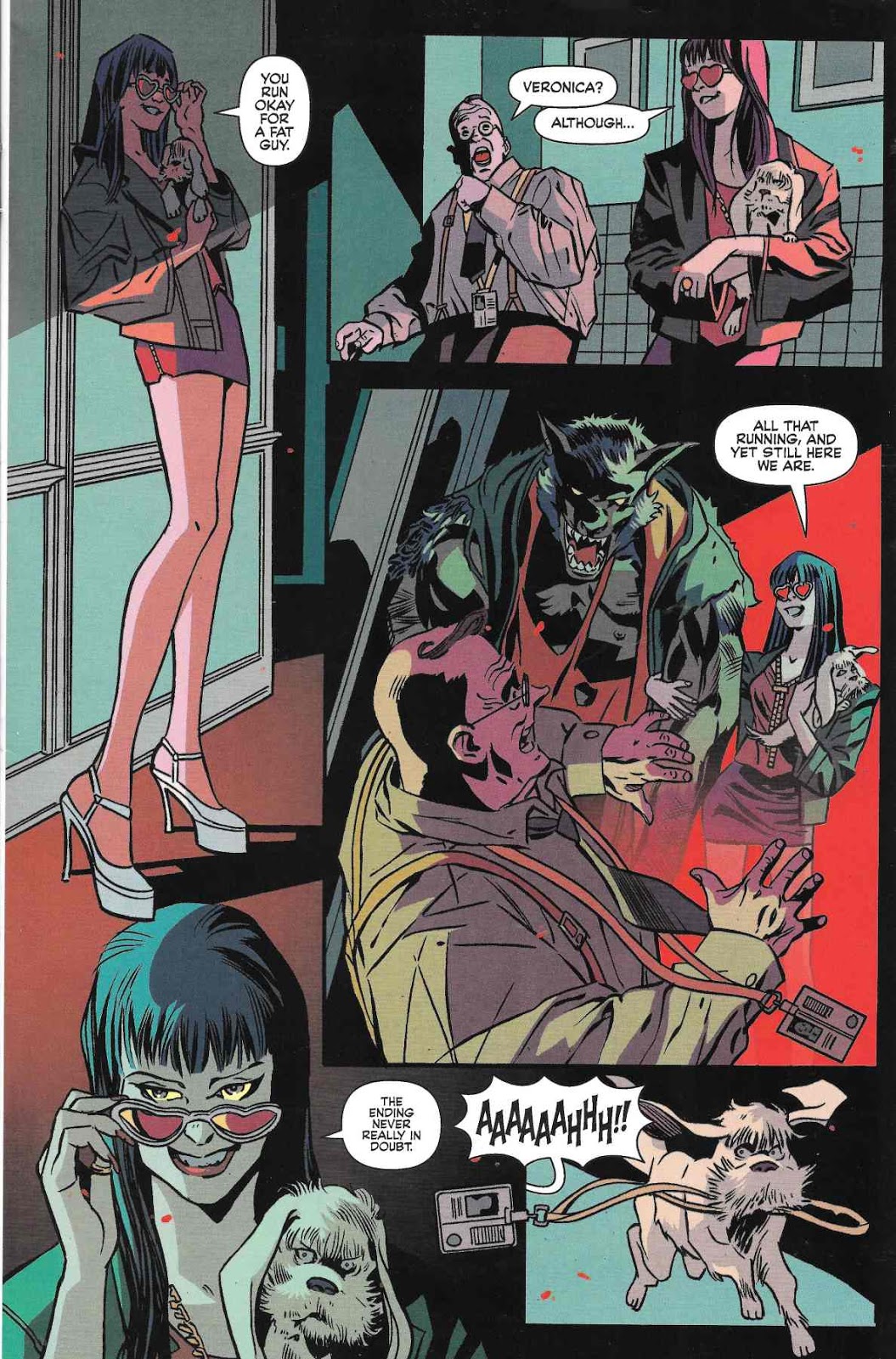 …Veronica! Who has been turned into a werewolf by Reggie and is also upset that Betty has Archie all to herself as they follow Jughead’s trail. So, in essence this is all Jughead’s fault. At least that’s how Veronica sees it as she and Reggie take a bite out of Mr. Weatherbee.


Solid first five pages. Not sure what’s not to like, right? Well, it is something about this next part, where we catch up to Betty and Archie as Archie has to prove his manliness to cousin Bo. There’s a page of Archie dodging punches and on the following he lays one right into Bo’s kisser. The love tap is so hard it knocks one of Bo’s teeth out. This whole bit seems so “un-Archie”-like that I’m left wondering who these characters are. A lot of the fun of the books is seeing the Archie kids played out in a tad bit more realistic way, but still generally the same as their old-school namesakes. Here we have a completely hard Betty and Archie, and I’m not comfortable with this shift in their personalities. It makes it more difficult to connect with them when confronting horrors if they are already full on terminators. Maybe it’s just me. 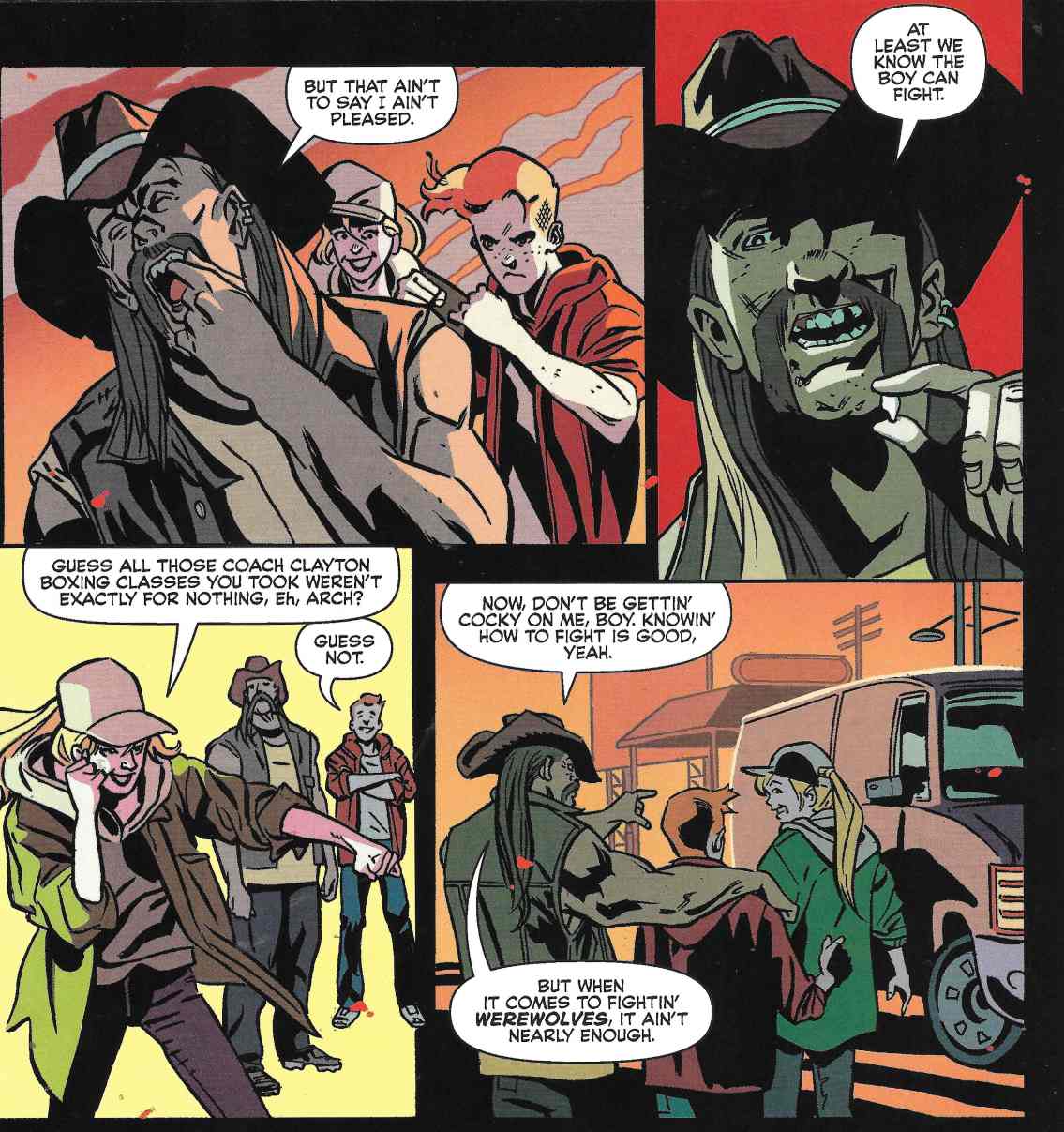 However, I don’t think so as writer Tieri now curves us toward something that will soften Archie, which is his inexperience handling firearms. 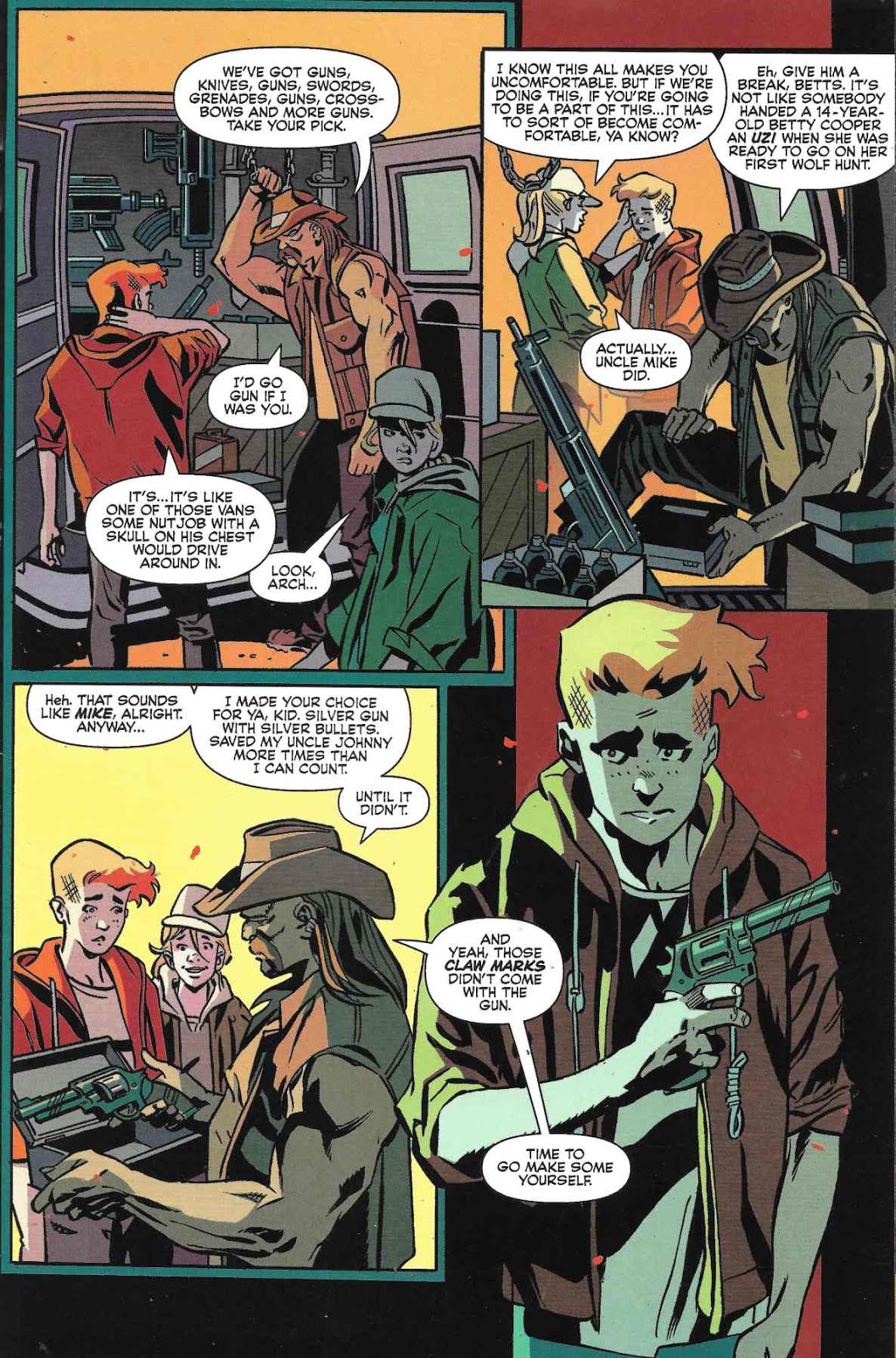 But even with doing that we let it drop that Betty is secretly teen-Rambo, so it doesn’t completely fix the issue. There needs to be some vulnerability on the part of our heroes, which I believe the book is clearly missing. This last image of Archie looking scared is a too little, too late for my tastes.

And for a book called “The Hunger,” that’s exactly what drives Jughead out of hiding. He and Hot Dog are hold up in a motel room eating delivery, but it’s doing a number on the pooch’s stomach. So now Jughead has to travel into town to buy some actual dog food, a terrifying prospect because his picture is being shown around as the latest suspect in the Riverdale Ripper investigation. 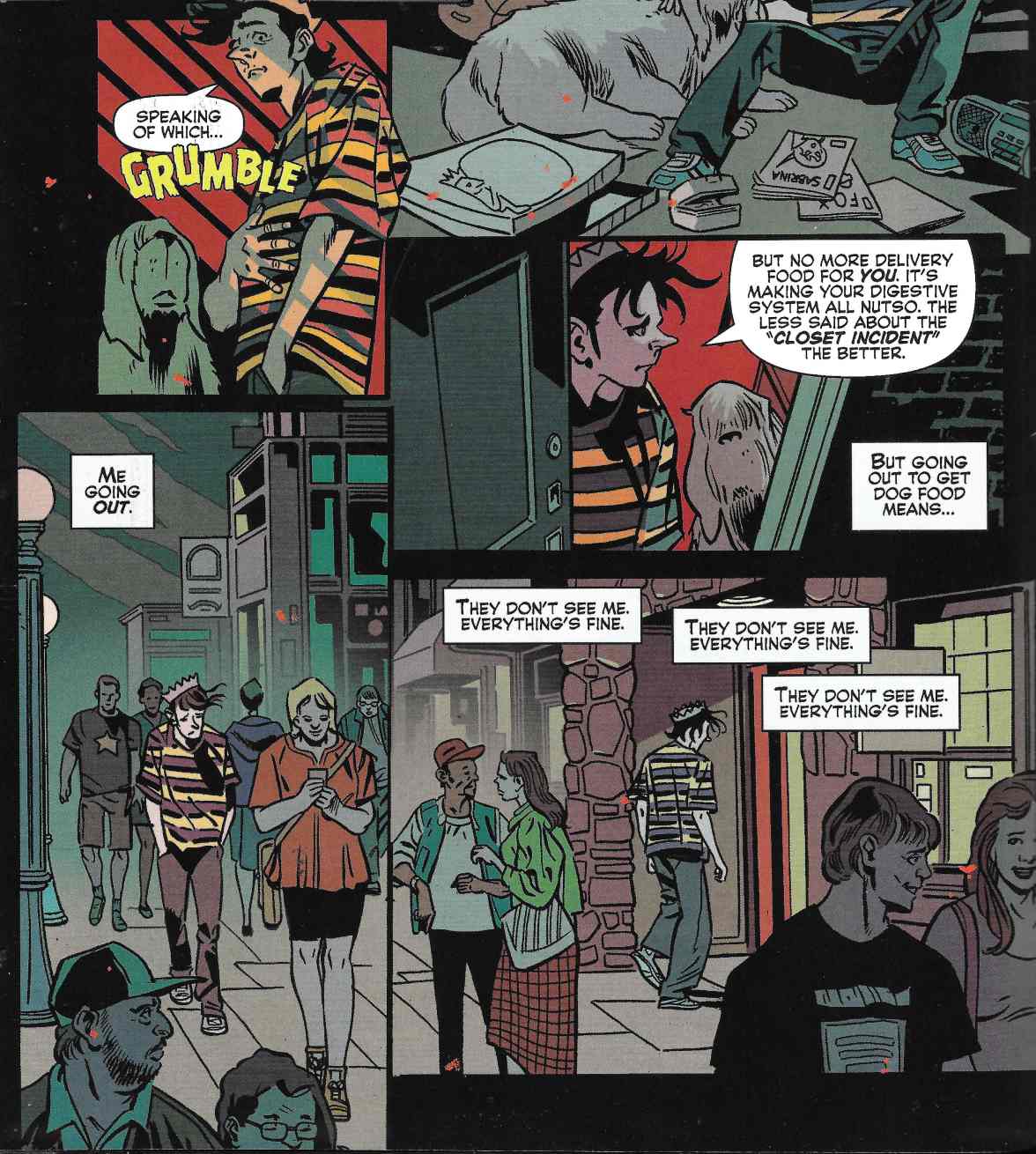 His fears are well-founded. At the checkout, he is identified by the cashier… 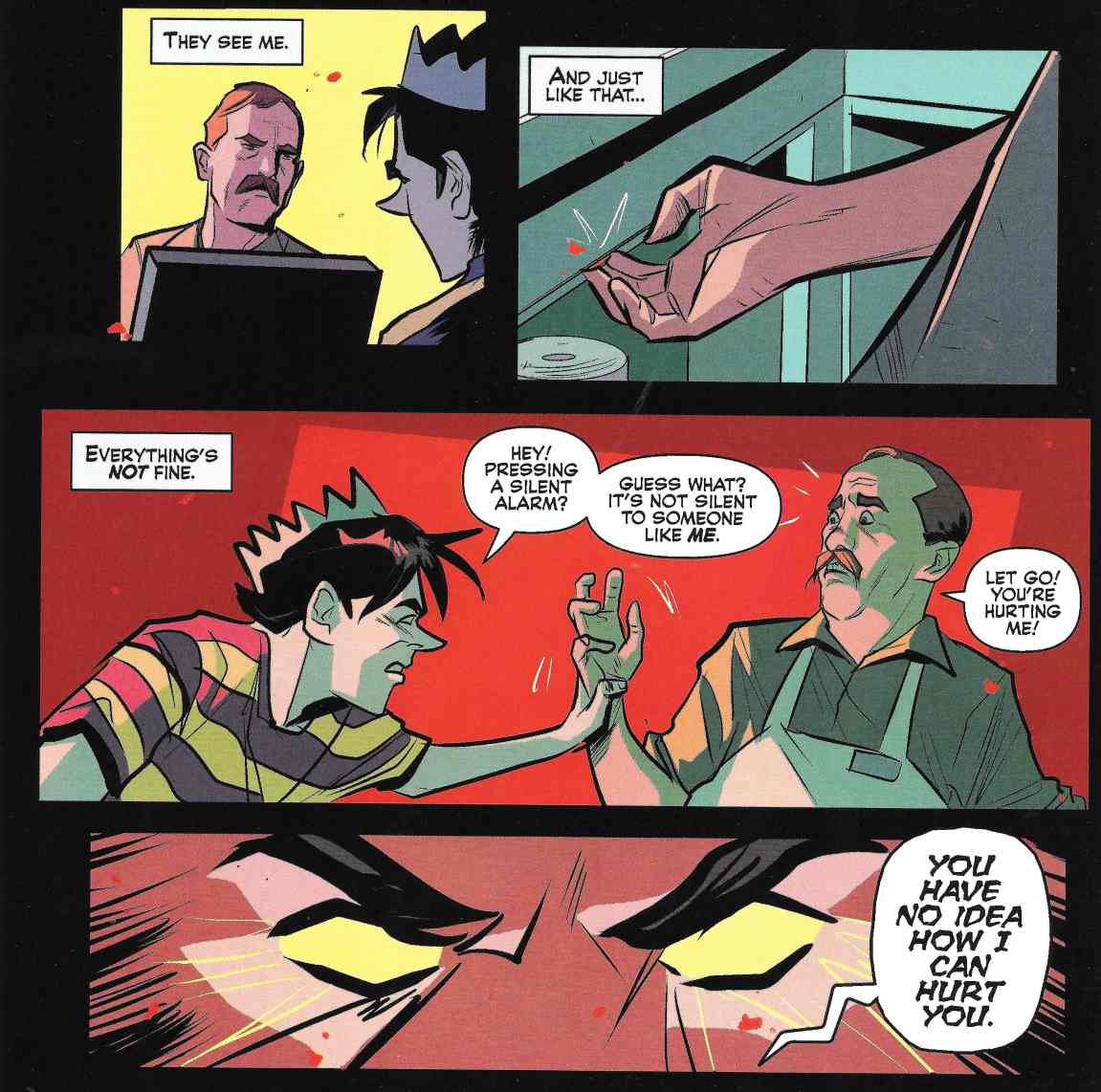 Sadly, I don’t know if this is an empty threat or not. Jughead here seems like his old self. Maybe he does have awesome werewolf powers, but he doesn’t act like that has changed him. In fact the book should actually have taken this in a darker direction, for my tastes. Have Jughead shown being tempted to eat fresh kills by his werewolf side, have him agonizing over having killed Reggie. Something. Jughead’s traumatic curse needs to have some emphasis here.

Instead we have a short bit where Jughead talks to his dog and then goes to the store afraid of being caught by police. Which is exactly where we end up… 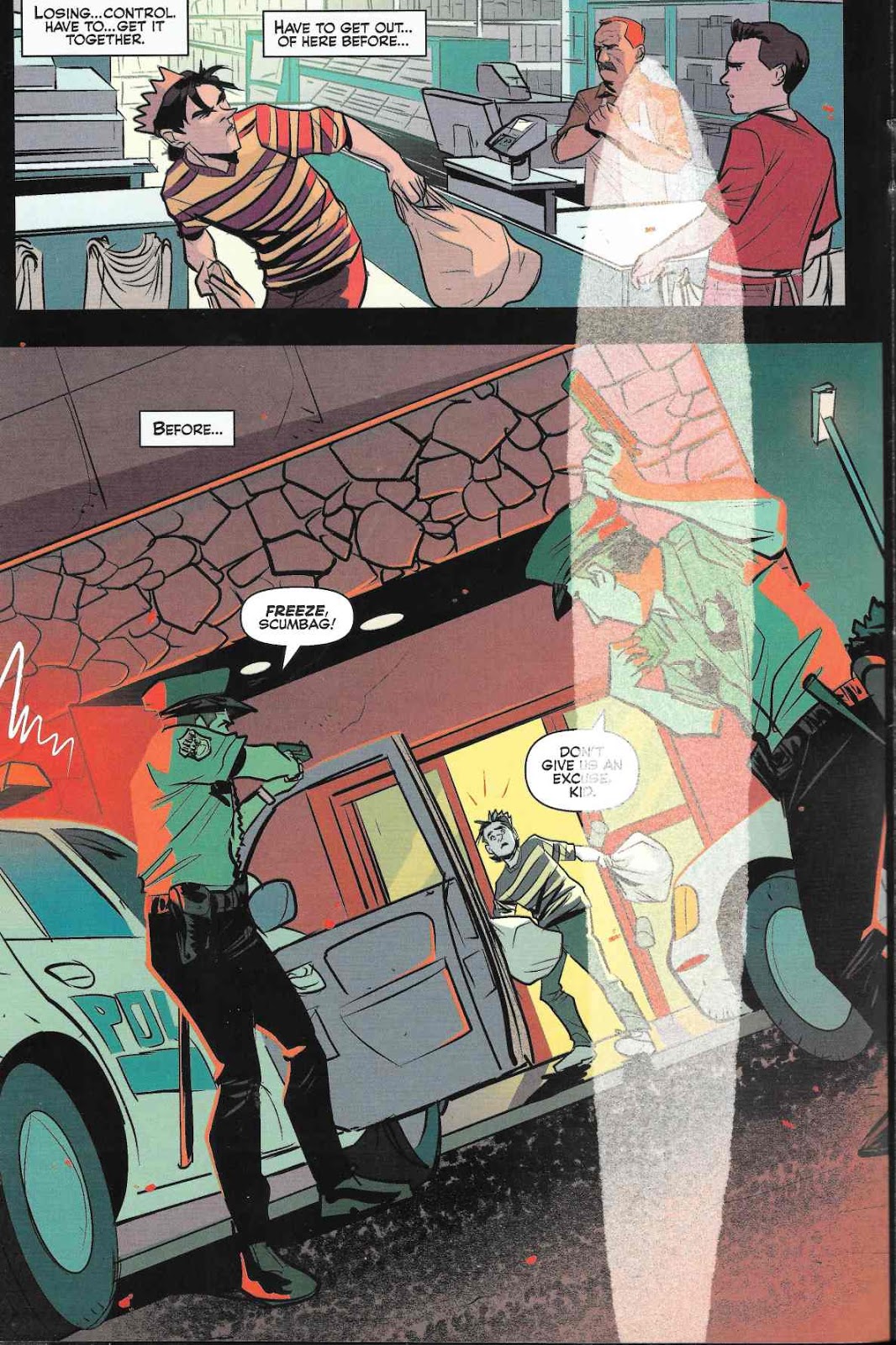 …along with the horror of a badly printed page. Wonder how many of these slipped through the Q&A process?
Next page we take the questionable story turn of moving back to Archie and Betty as they inquire at the circus where Jughead got a job immediately after leaving Riverdale. Appears he might have eaten one of the circus freaks and they all sign on to get revenge or something similarly silly. It is an out of pace three pages, when we have an exciting confrontation that we just cut away from. The only interesting thing it establishes is that clan Cooper has a head named Elena that Archie and Betty have to check out. 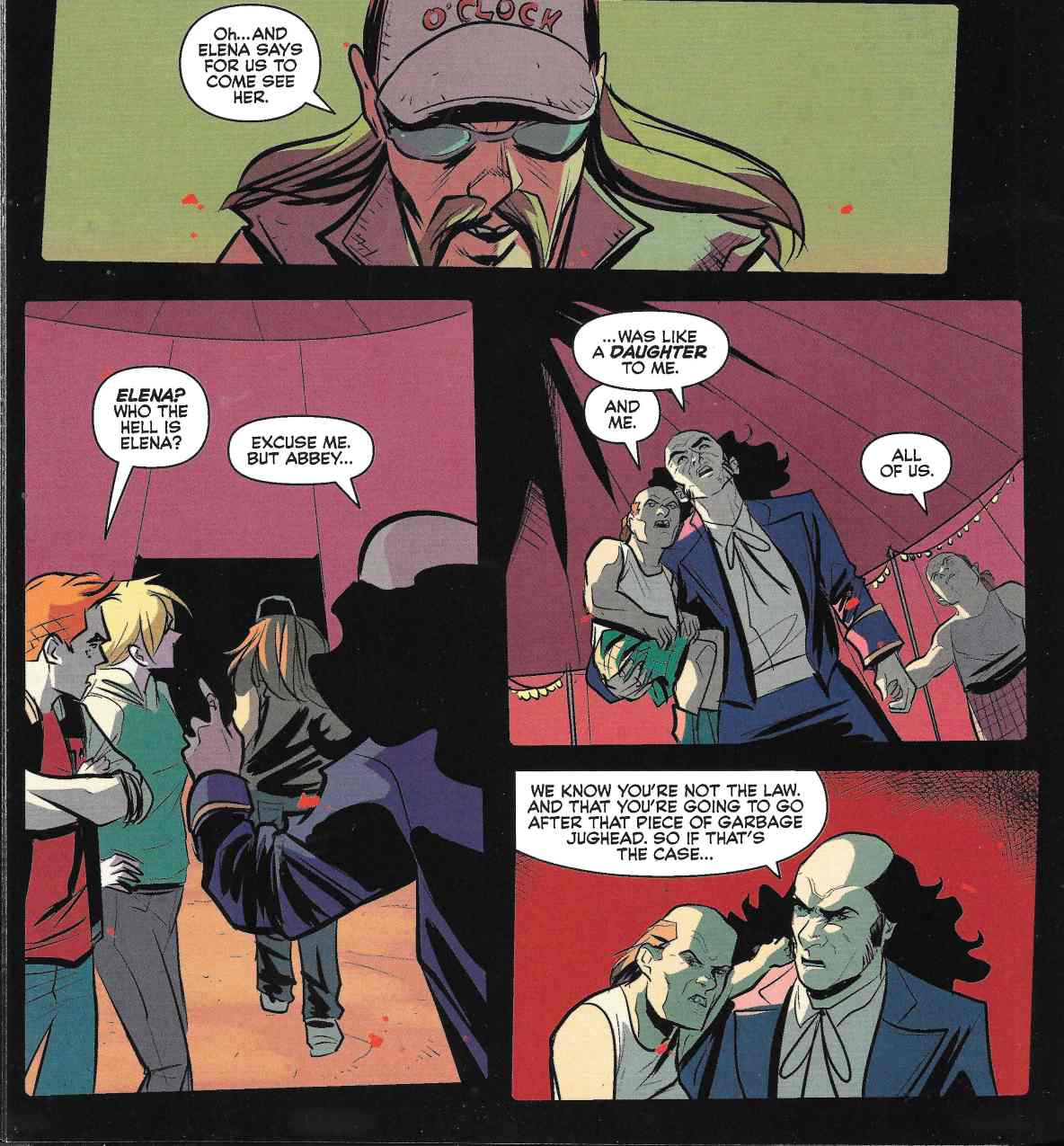 Only then do we cut back to Jughead’s bad trip to the grocery store. Looks like our werewolf boy is pretty boned. Cops know who he is and the clerk even comes out to personally ID him. Which happens to end badly for the store clerk. Looks like he should have stayed inside. He’s gutted by a different werewolf and my red herring sense goes off as this new furbag starts cutting his way through the officers. In the end both the werewolf and Jughead escape. 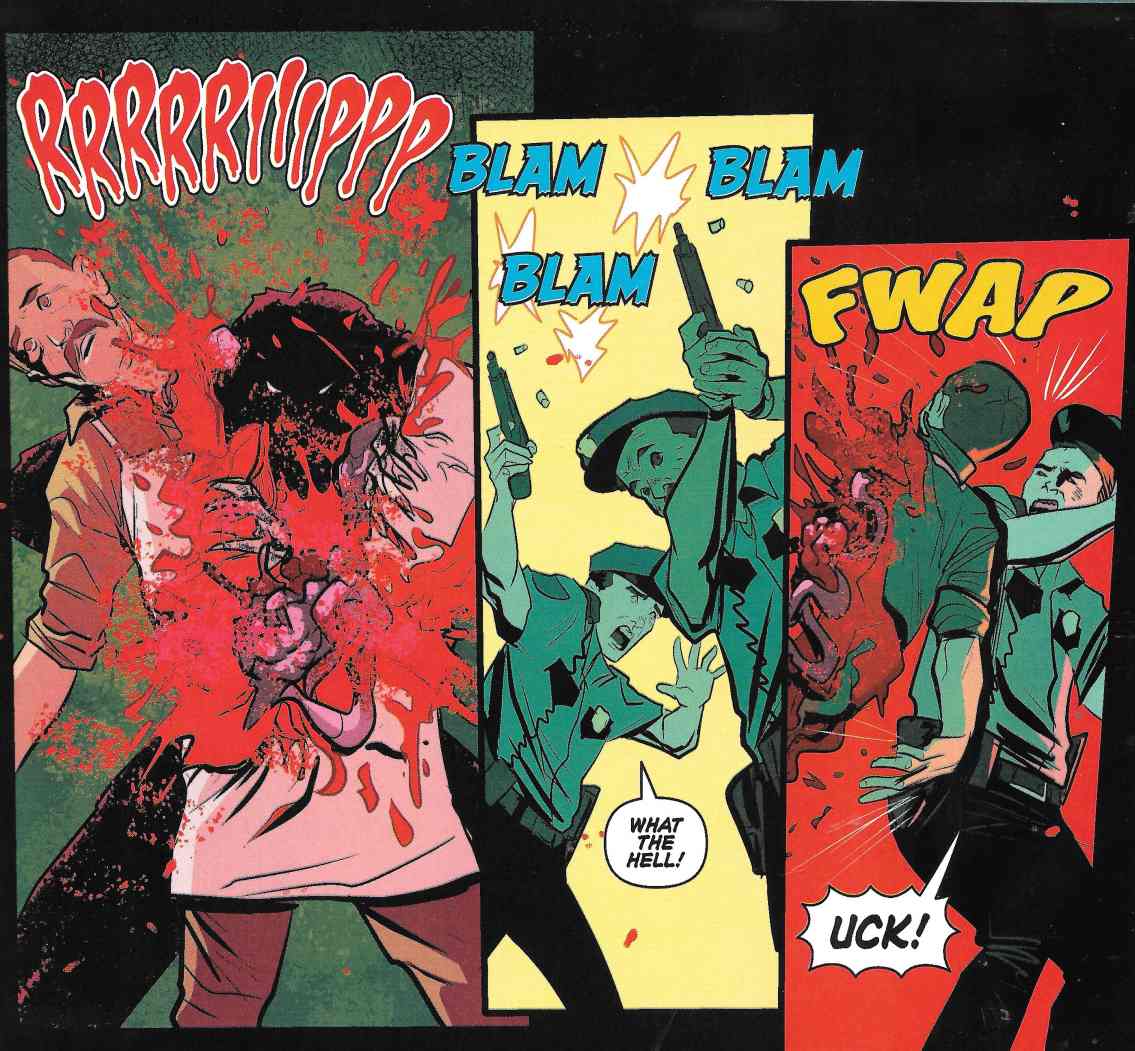 But it isn’t like they teamed up or something. Jughead is clearly trying to evade both his pursuers. Unfortunately, the werewolf just caught up. 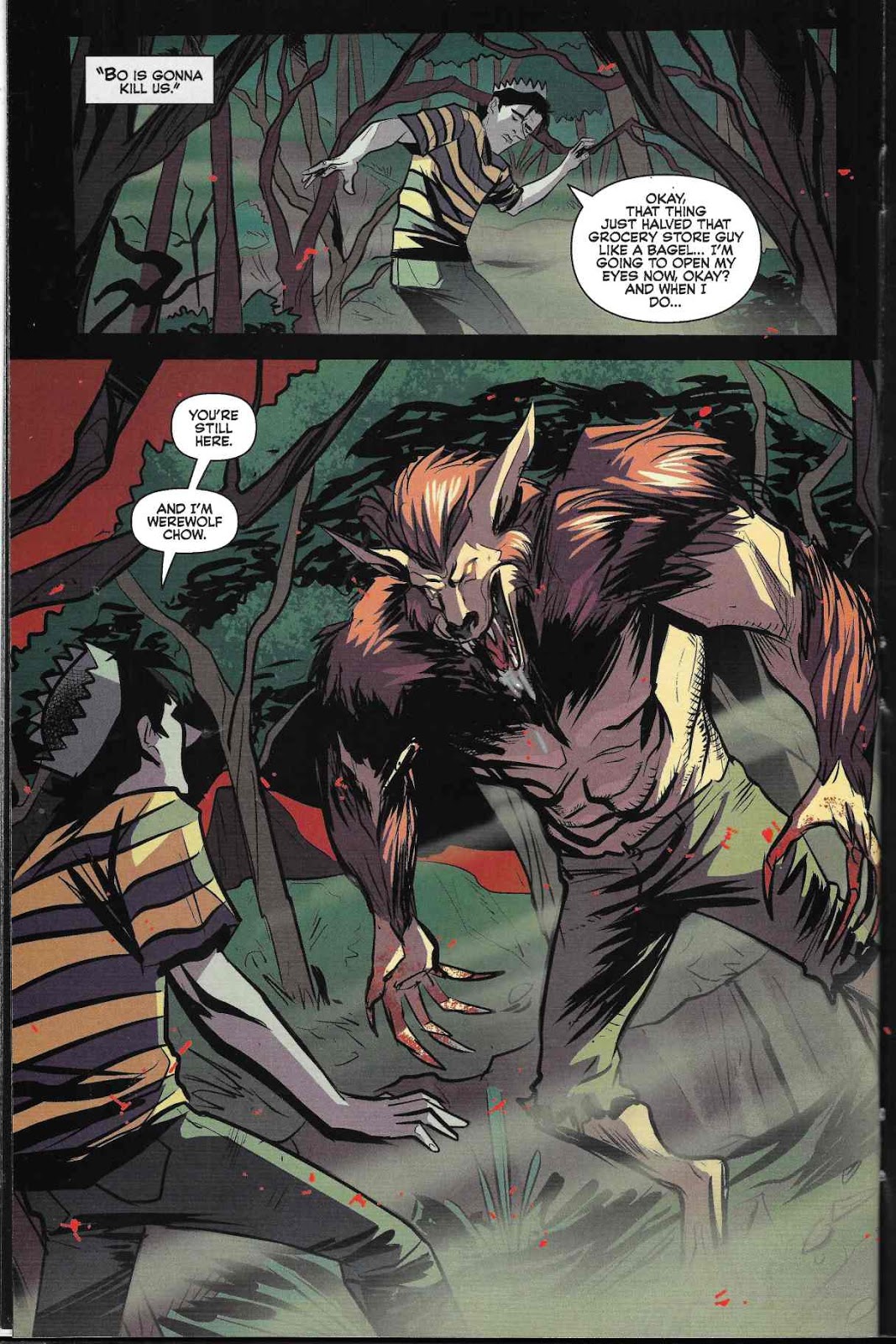 If you are assuming this is Reggie and the series’ major confrontation is about to be over, I got news for you: No. Such. Luck. 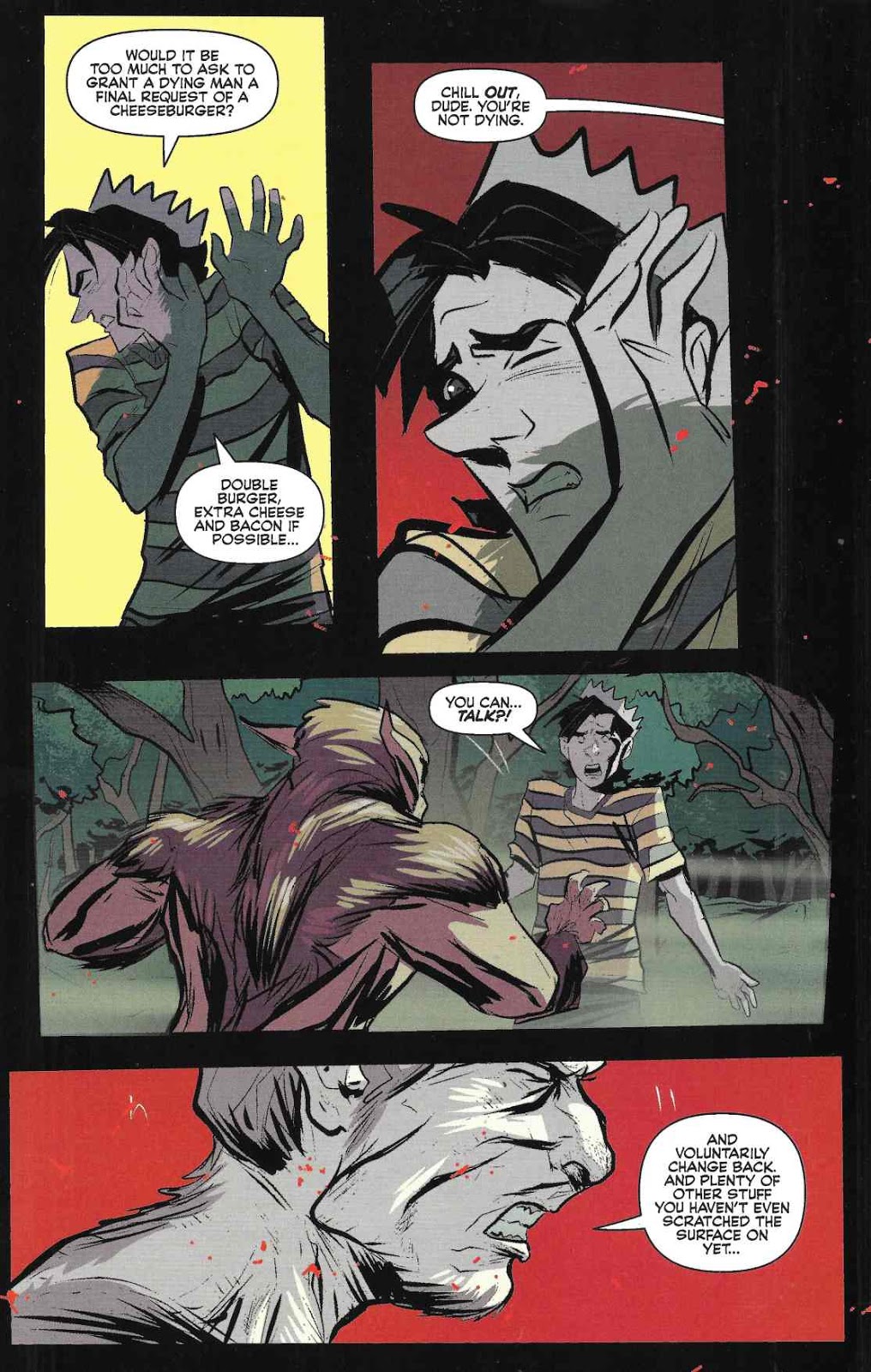 Nope! What we end up with is Jughead’s cousin Bingo, a minor character that I have never encountered before. And that’s where we end, with Bingo promising to open Jughead’s eyes to the good life of gutting people with your own fangs and claws. 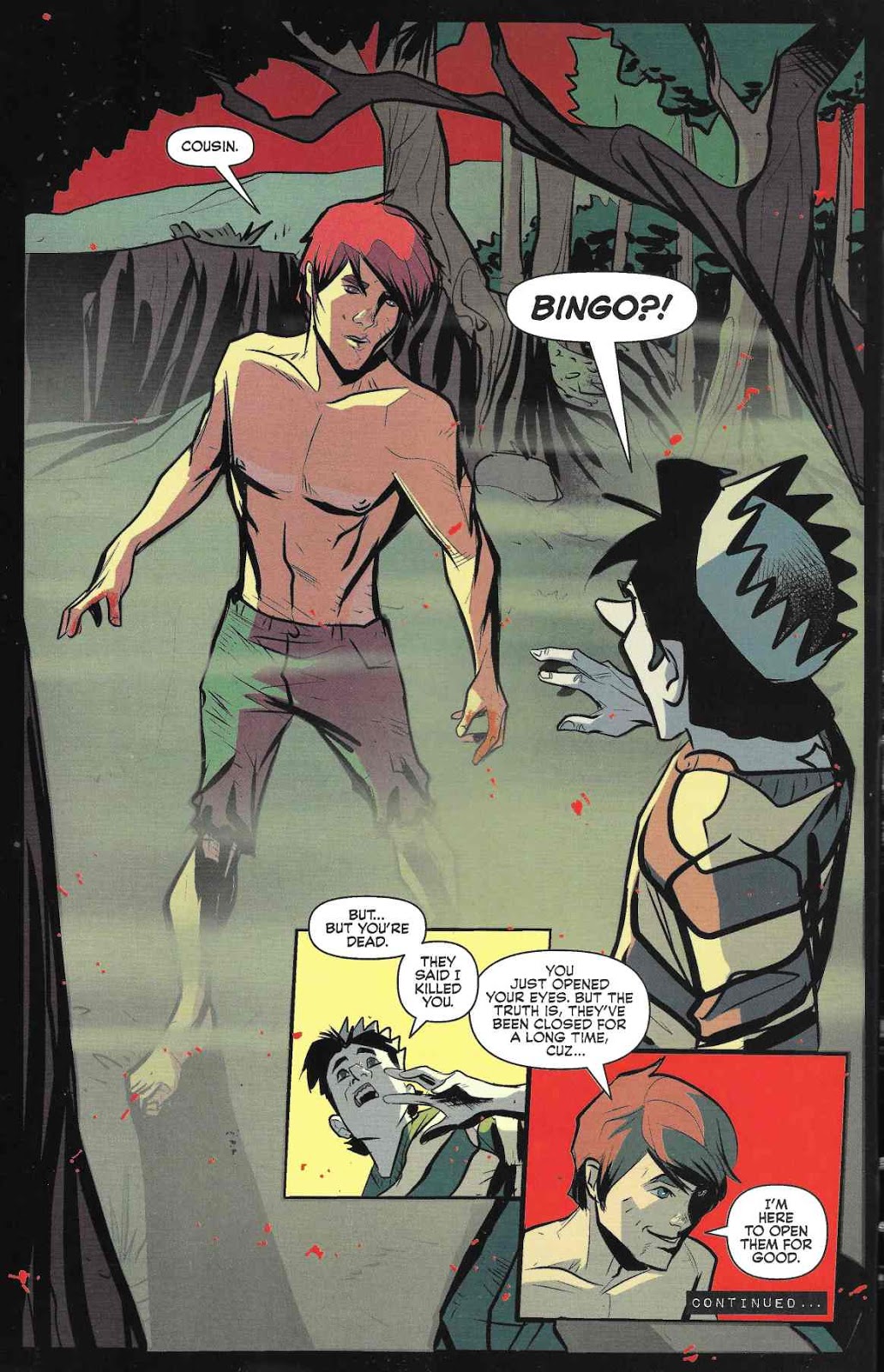 This series got three complete arcs in 13 issues and a crossover with the Archie vampire horror series “Vampironica”. If the decline in quality continued in that series, I’m not certain I want to find one of them.

Posted by SonOfCthulhu at 7:36 PM