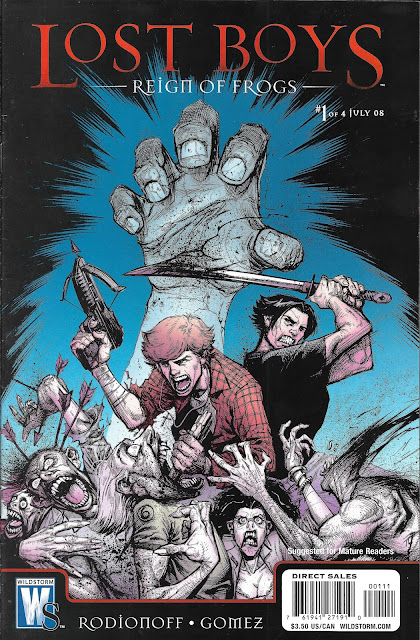 There are very few movies that I will give Joel Schumacher credit for, but The Lost Boys is one of them. It’s a horror-comedy about a California beach town that is infested with young, hot vampires. Unlike a lot of movies, it works on both the horror and the comedy levels primarily due to a good script and some overly great casting. 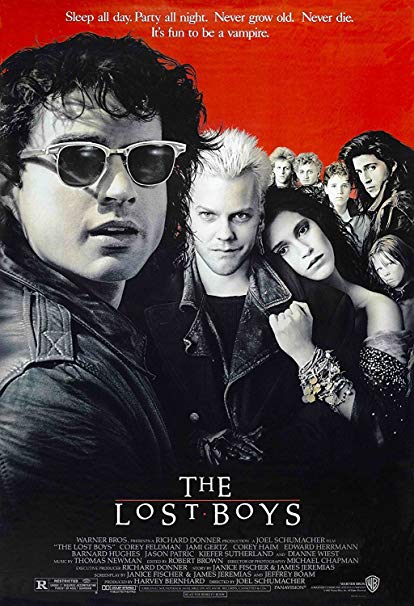 In fact, that happens to be Schumacher’s one credit: the guy could pull together a great cast. St. Elmo’s Fire, Flatliners, The Wiz, even the disastrous and terrible Batman films he made boasted big name ensemble casts. The Lost Boys is no exception to this. Jason Patric as the conflicted and tempted older brother. Jami Gertz as the temptation. Kiefer Sutherland as the mysterious, evil vampire motorcycle gang / cult leader. Corey Haim as the fish-in-new-pond younger brother. Dianne Wiest as the “trying hard to do it all” single mother. Corey Feldman and Jamison Newlander as the oddly named comedy-element siblings who are the only ones to acknowledge the vampire problem in their town. Ed Hermann as the slightly suspicious bachelor hitting on Michael and Sam’s mom. Even Grandpa Barnard Hughes is exactly on point.

As a movie, The Lost Boys is a confection. Something you will swallow and not remember eating an hour later. It is filled with good-to-great performances, but it doesn’t have much staying power. The movie celebrated an era in cinema where even horror wasn’t so horrible. The music from the soundtrack will follow you home from the theater more than any single scene. However, the feels it evoked would launch several careers. 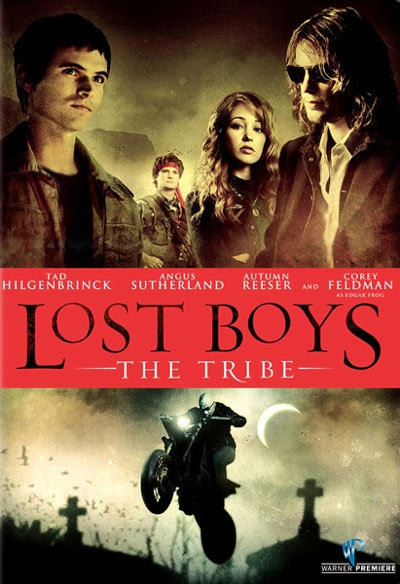 And a sequel movie released 20 years later direct to DVD. The sequel starred Feldman, who reprised his role as Edgar Frog. Corey Haim and Jamison Newlander have cameos at the very end of the film, but none of the other cast members return, even in cameo. While it tracked well for a DVD release, the film garnered atrocious reviews and currently sits at the little-coveted 0% on Rotten Tomatoes. 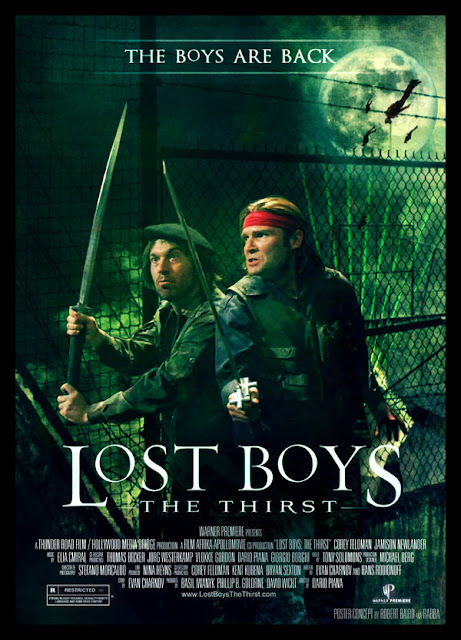 A third film was green lit and filmed. Feldman and Newlander were attached and I assume it is even further down at the bottom of some Wal-Mart $5 movie bin. It also holds a 0% on Rotten Tomatoes.

To think I hold out a lot of hope that this comic will be good or capture the magic of the first film is to misread what I’ve been saying above. The Lost Boys is a near-perfect accident, a confluence of elements that are almost impossible to capture a second time. A melding of young Teen Beat heartthrobs with a soundtrack straight off a “best of” MTV playlist and a competent, funny script directed by someone who knew how to put pretty people in proper lighting. I’m not stating that the actors didn’t have skill or talent, but I am saying that they all were very niche players and The Lost Boys put them right in their lane. The other movies prove recapturing the magic is impossible given that everything, the world included, has moved on from that moment.

And while the comic can cover over the actors’ flaws in growing up into pulpy adults, it will always miss that esthetic that only being made in the 80’s for an 80’s audience would create.

Let’s see what it does anyway though, we are here already. 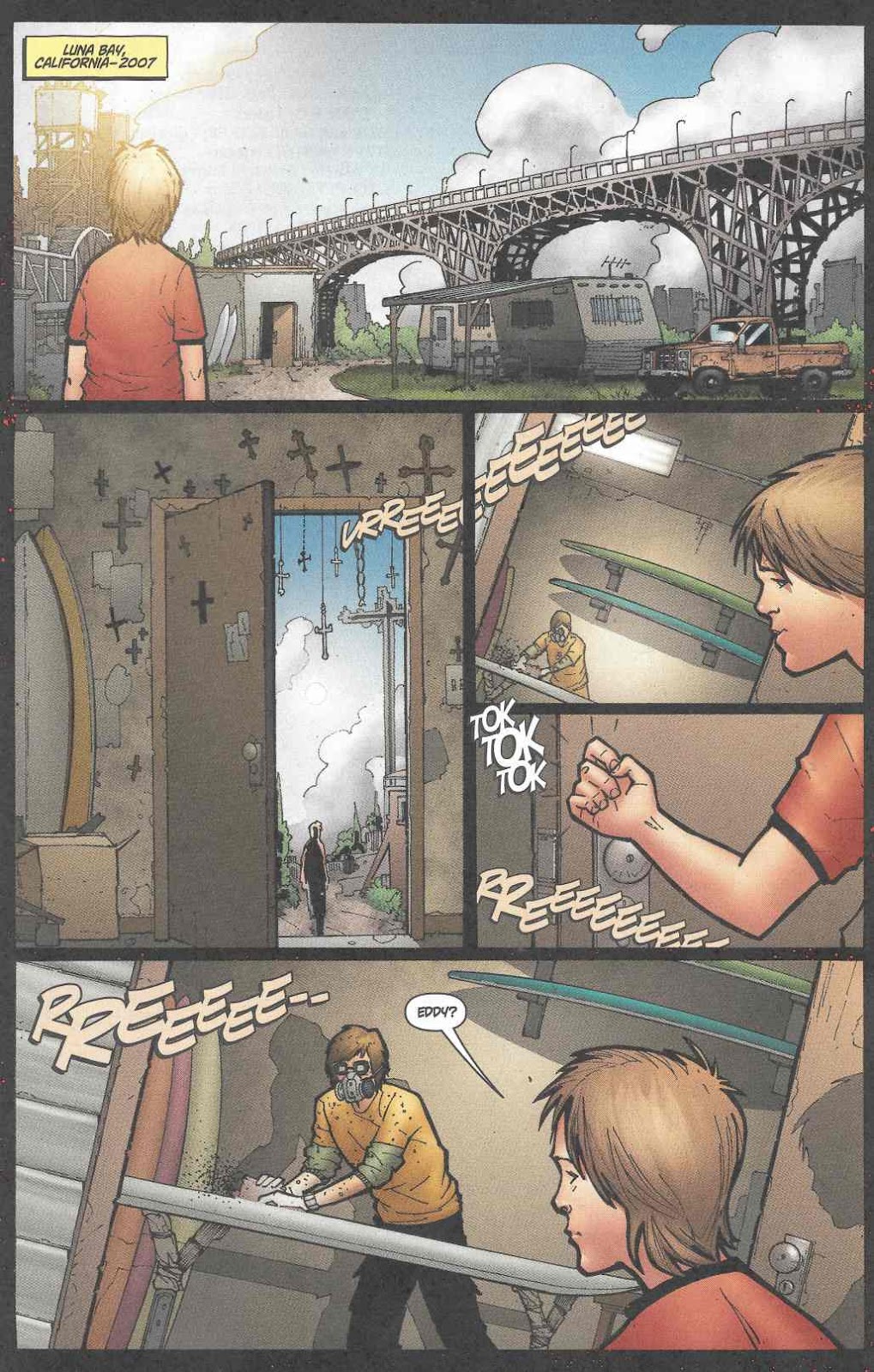 We begin back in Luna Bay, California with this young boy approaching a dilapidated mobile home in a beat-up area of town. The doorway is littered with crosses and the furnishings inside look sparse to non-existent. This is one of our Frog brothers, certainly. 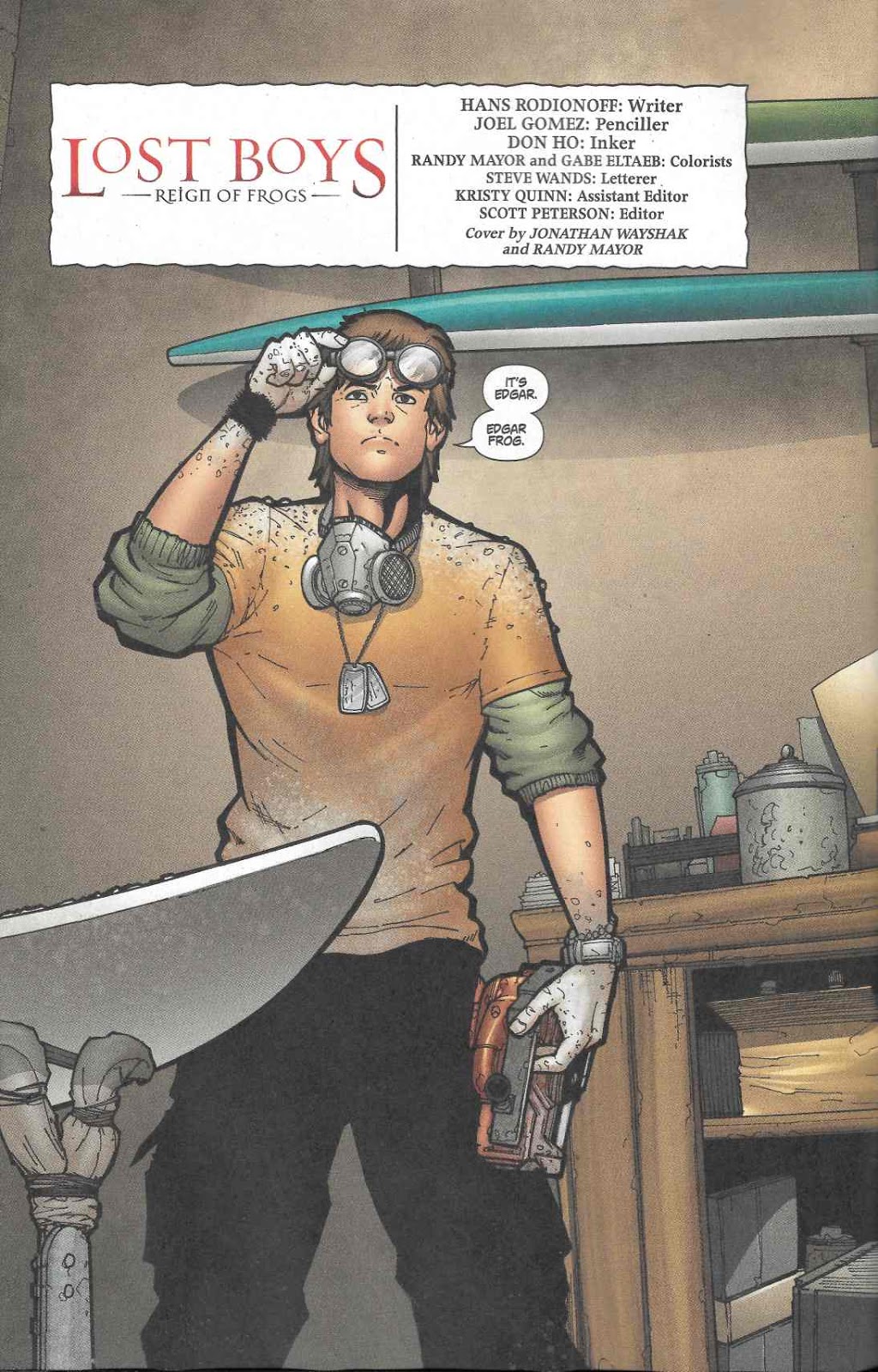 It’s Edgar, Corey Feldman’s character, and the central protagonist of the two sequel movies. This is a sequel to the original movie, but a prequel to the two spinoffs. Of note here is that the writer of this four-issue series is Hans Rodionoff, the scriptwriter for the first direct-to-DVD sequel. Not certain if writing comics is a step up or down from that, all I know is that he’s here.

Also of note is that Michael (Patric) and Sam (Haim) were the central characters of the first movie. This is like those Tremors sequels where they concentrate on Michael Grossman and Reba McEntire’s characters when all we really cared about were Kevin Bacon and Fred Ward.

But I digress…WHAT is the story in this book about, anyway? 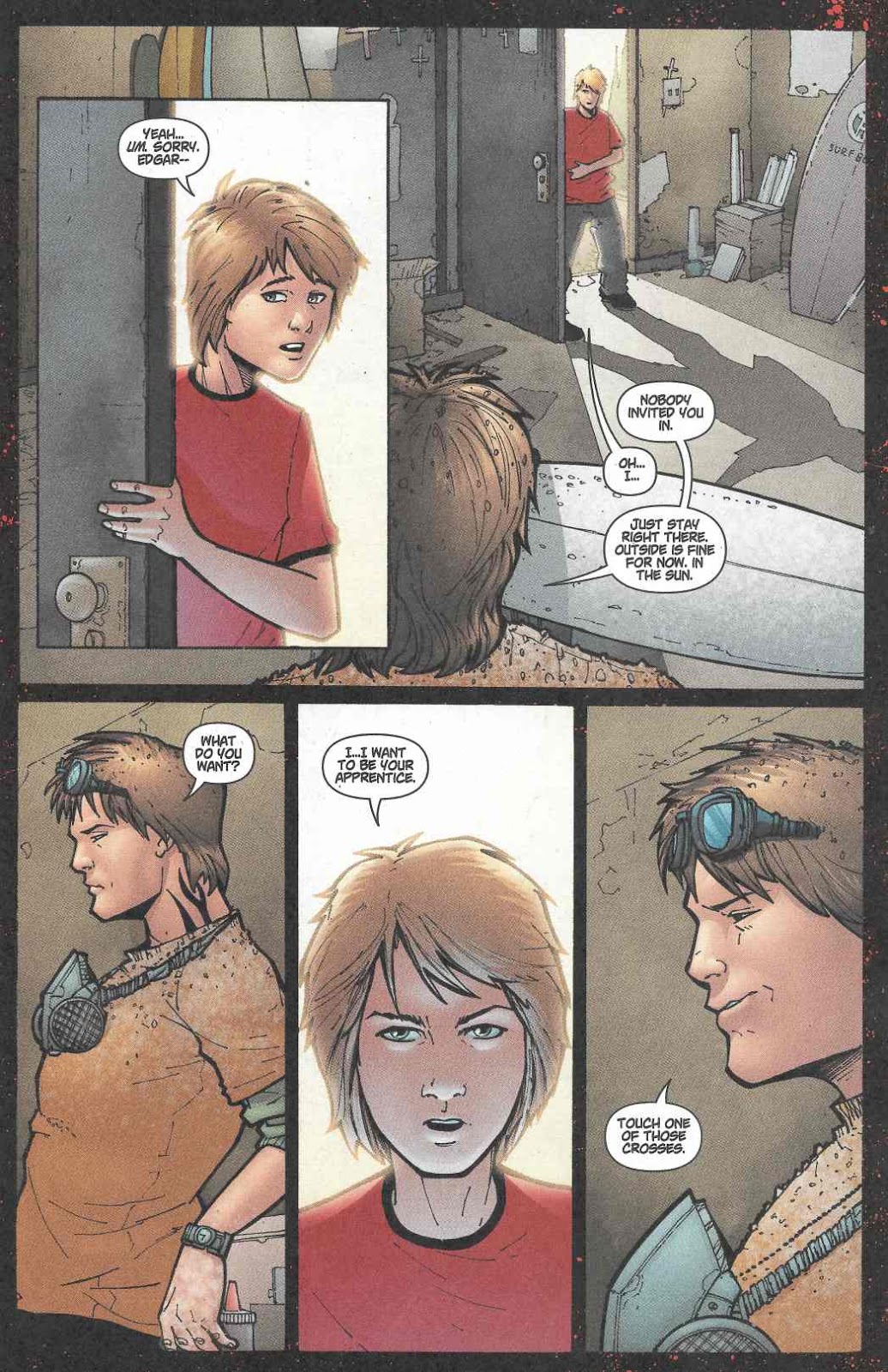 It COULD be about Edgar taking on this kid as a new apprentice. That might be entertaining. 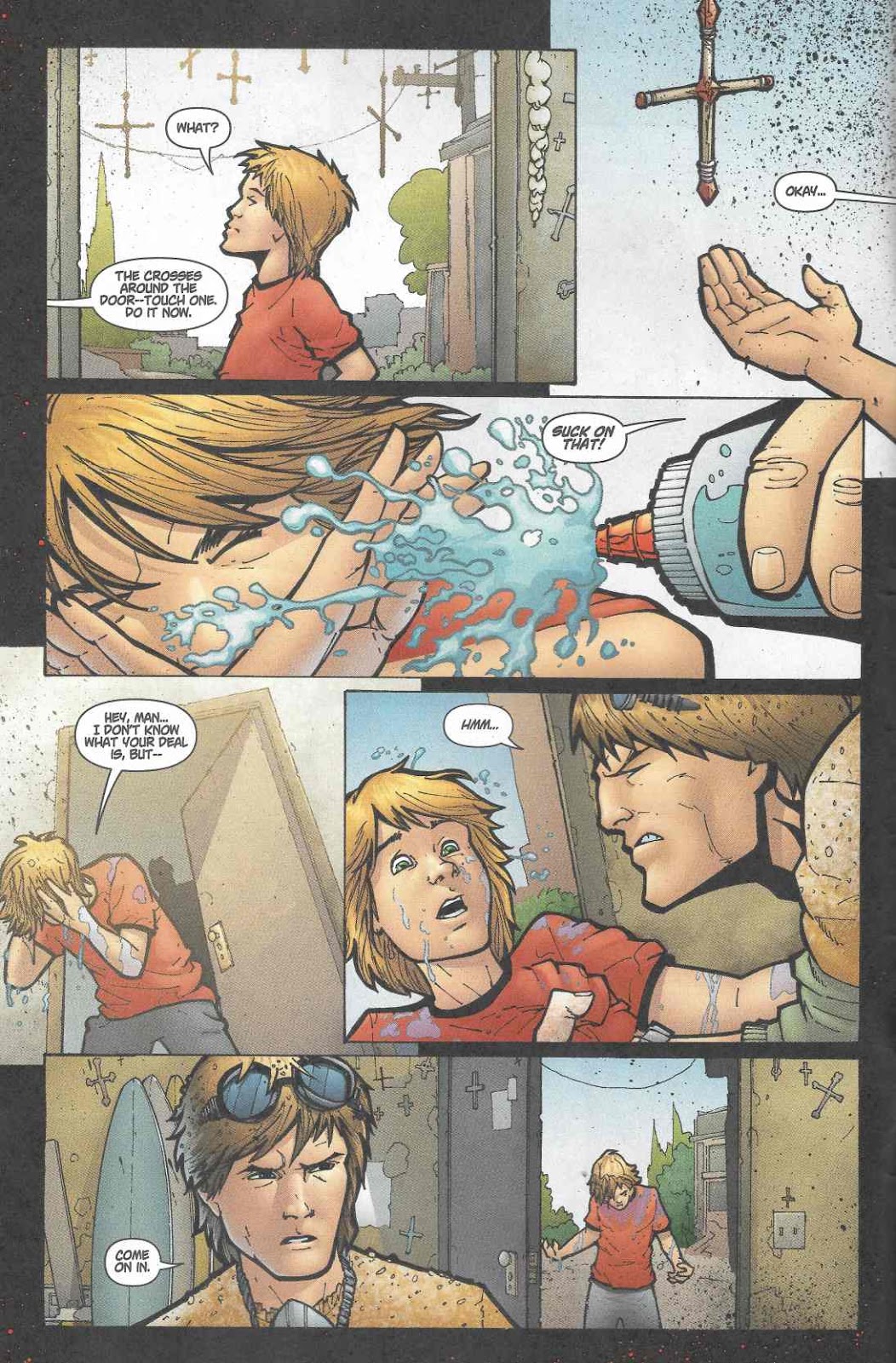 Edgar always was the fast-talking, idiot half of the Frog brothers team. And it certainly seems like this concept where he acts like a dick to this kid while hunting vampires might be a bit of fun. 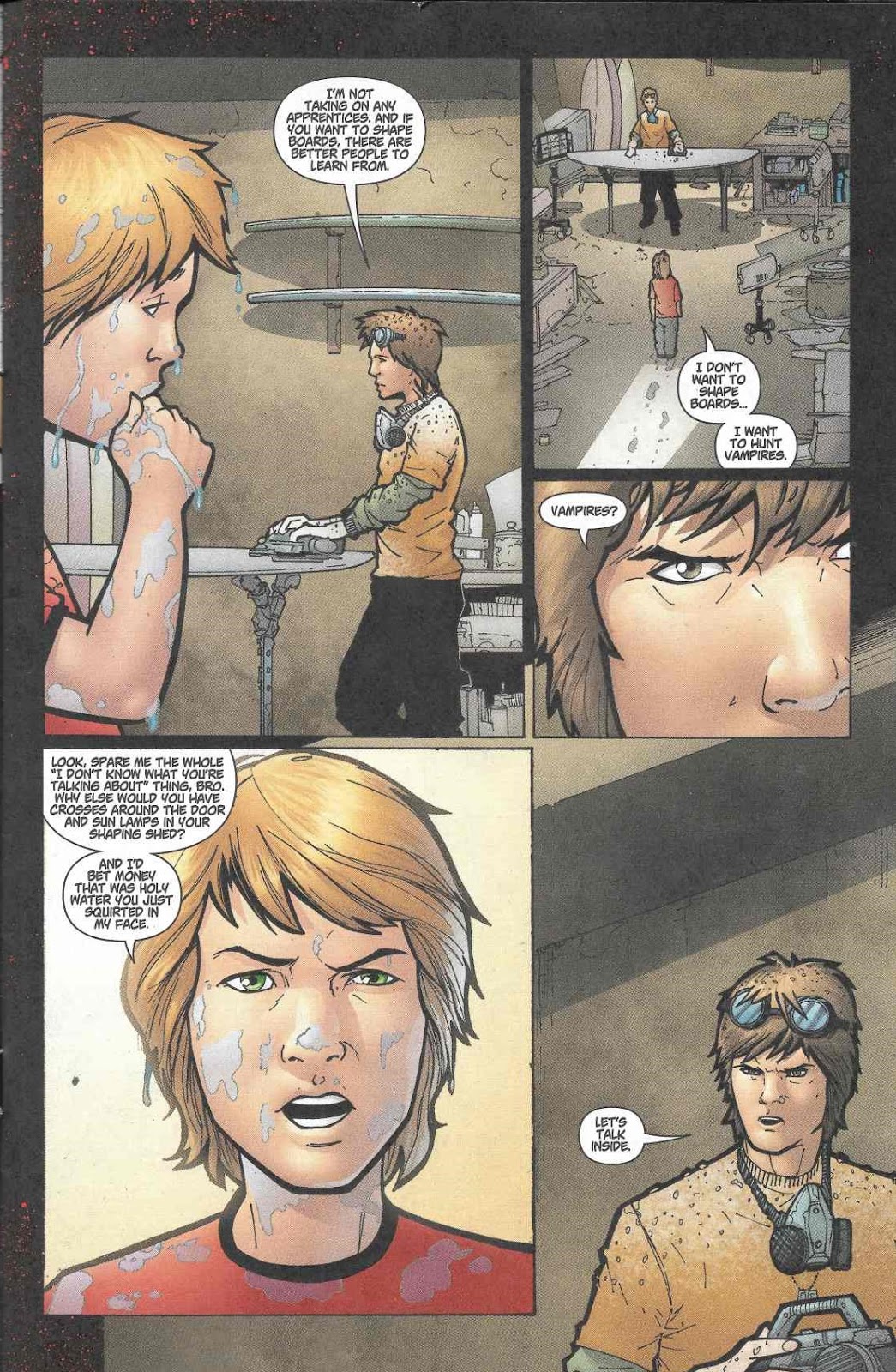 Although, it has to get better, and quickly. This kid needs a name and a reason to want to hunt vampires. Edgar needs better lines (the kid is already inside your house.)

Sadly, all that hope dries up quickly. This passing the torch storyline gets sidelined because Edgar doesn’t want the kid to get “hurt”. It would have been better for Edgar to hear him out completely first. 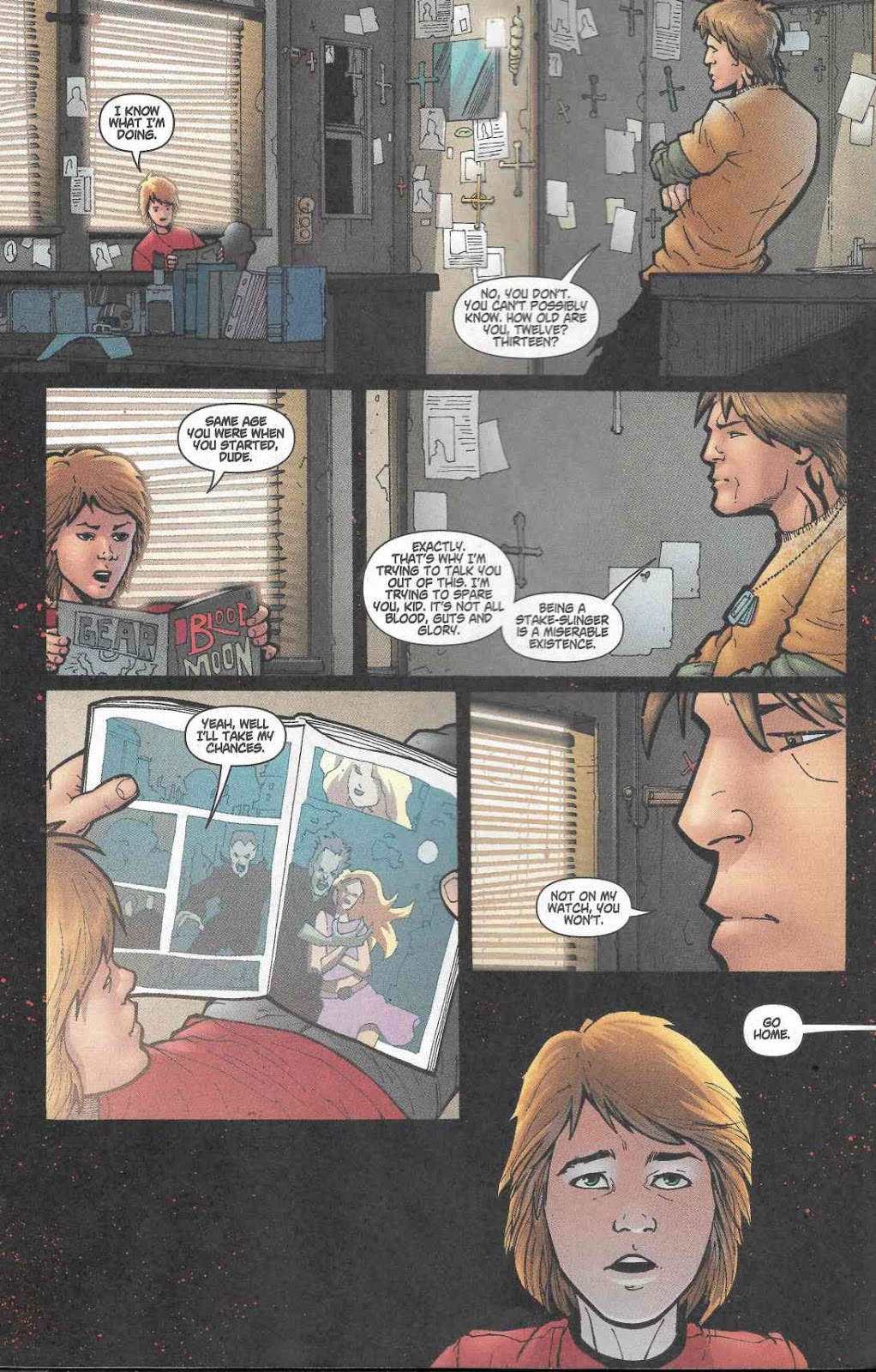 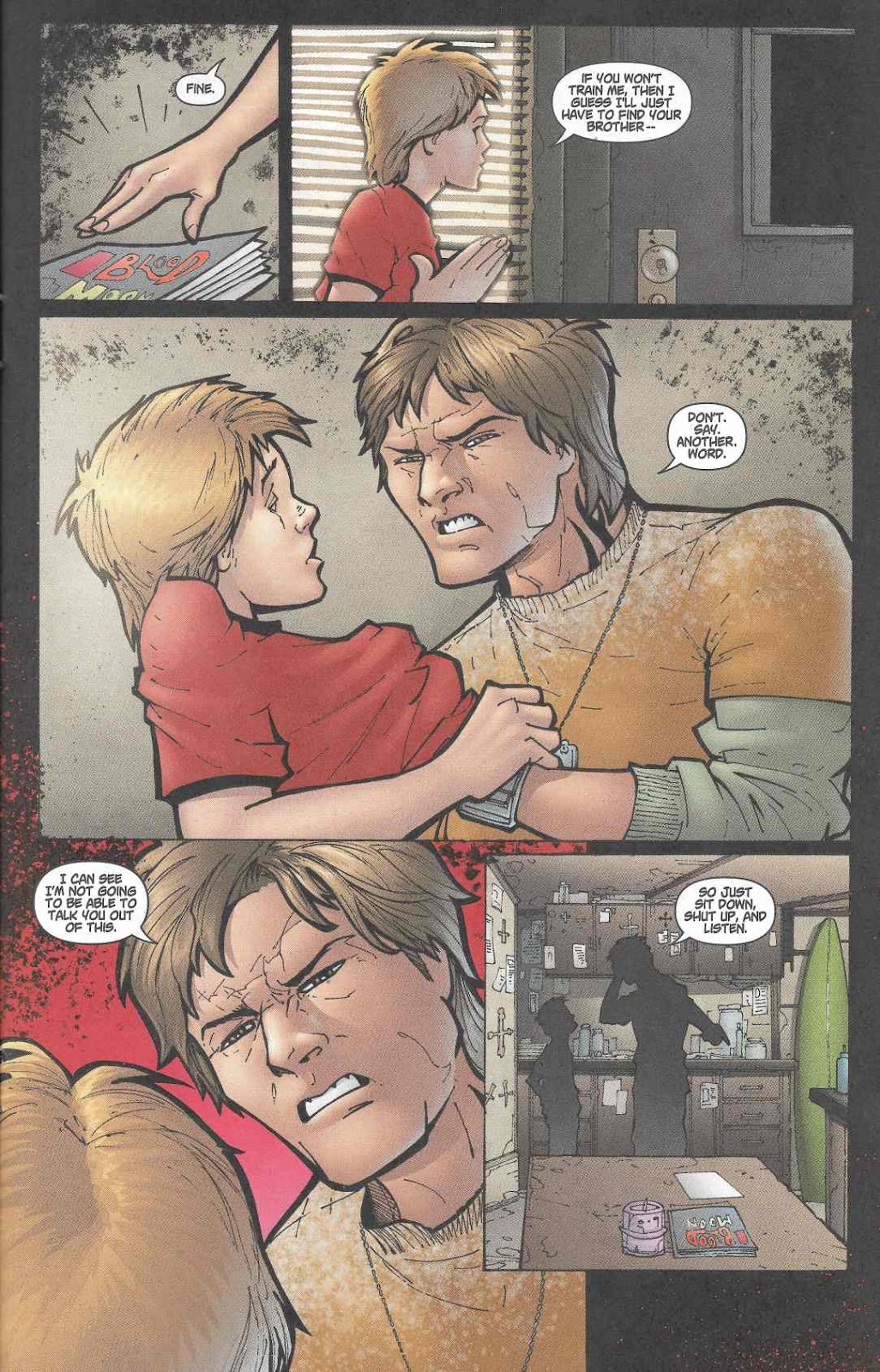 But no, we have to instead have this REALLY odd, tone change bit where Edgar tells a tale that might as well be called The Frog Brothers Go To Washington and Fight Congressional Vampires. 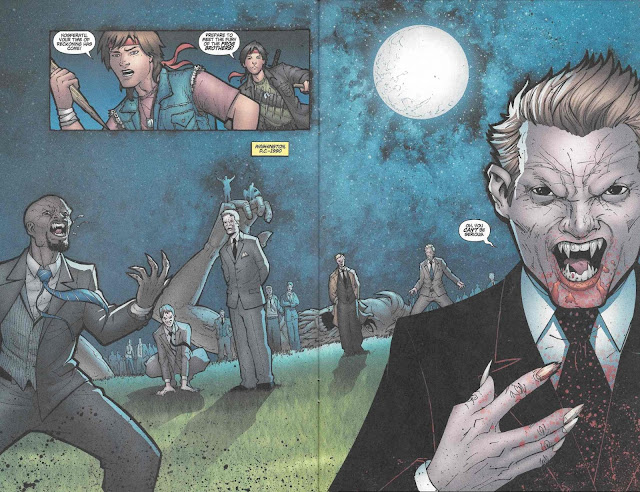 And when they are done, they are placed on a secret subway train into congress… 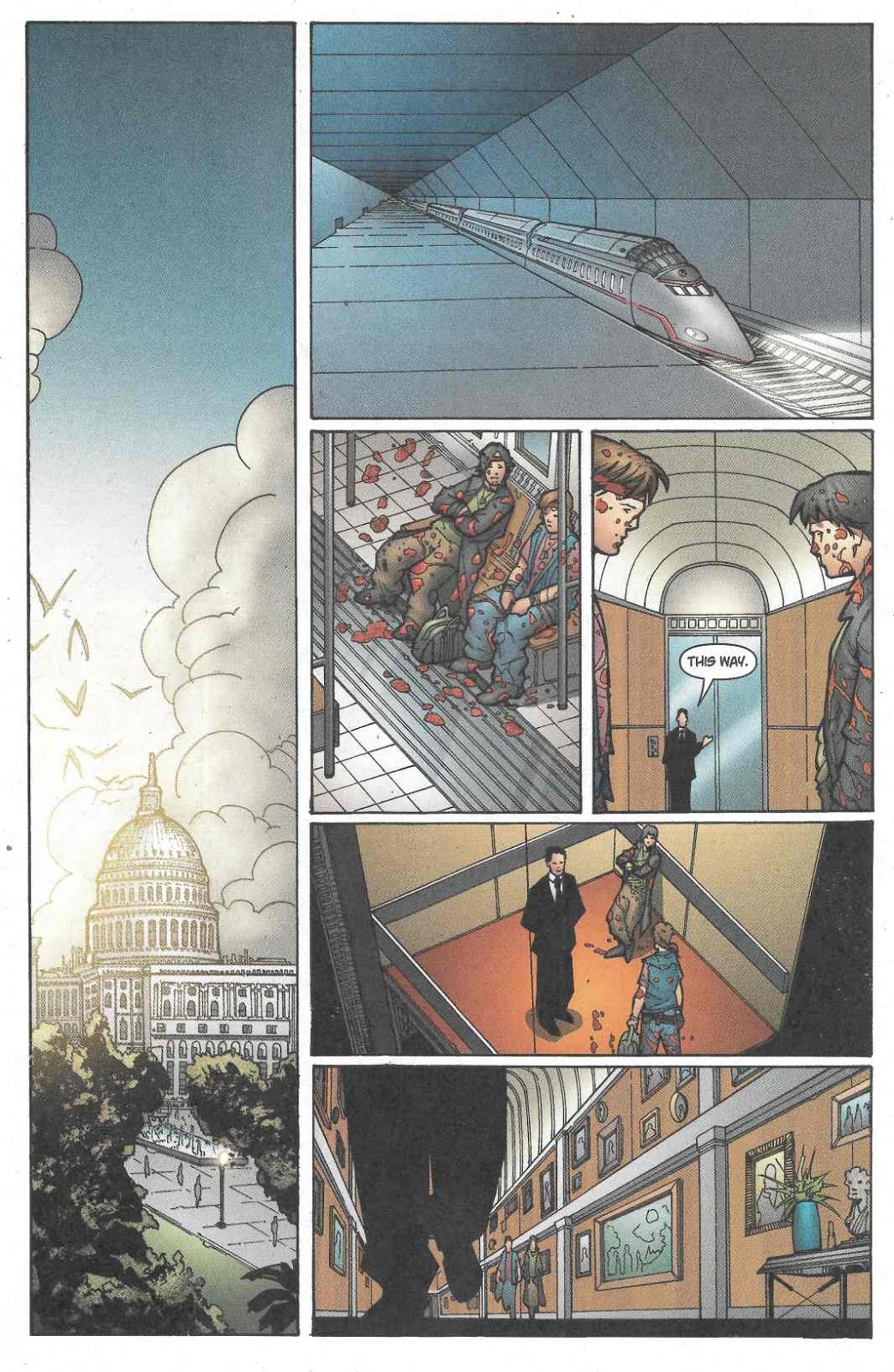 …to bring the President the head of the vampire Senator. File this under “things you can’t make up.” 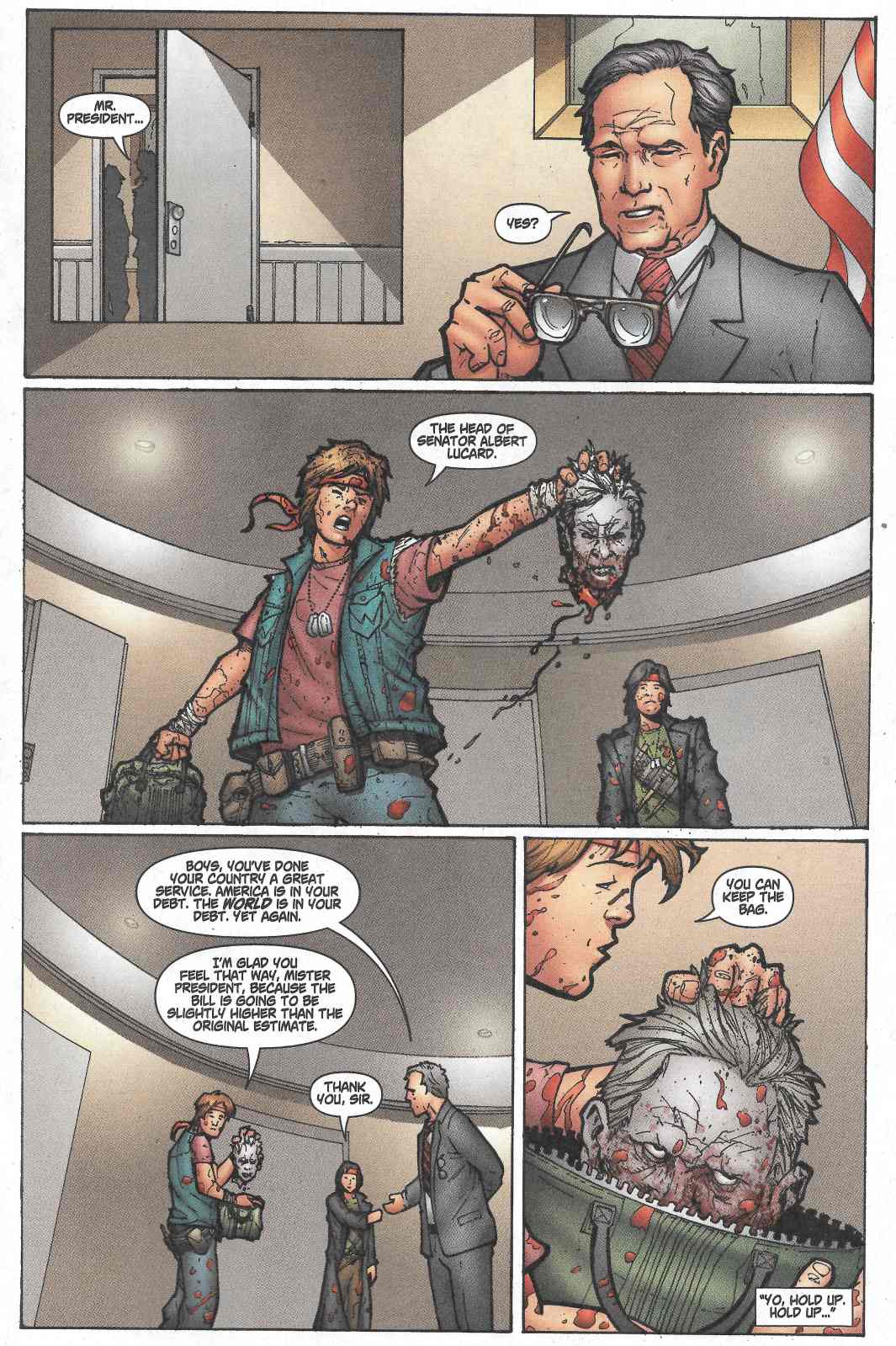 Now I’m not certain if this is supposed to be Edgar Frog’s overblown imagination and an attempt at getting the kid to fall on his knees with hero worship or THINGS THAT REALLY HAPPEN IN THE LOST BOYS UNINVERSE, but it fails to connect with me. That was four pages of story I won’t be getting back and it seemed excessive for a fake flashback. Either stick with reality or make the fantasy shorter and plainer. 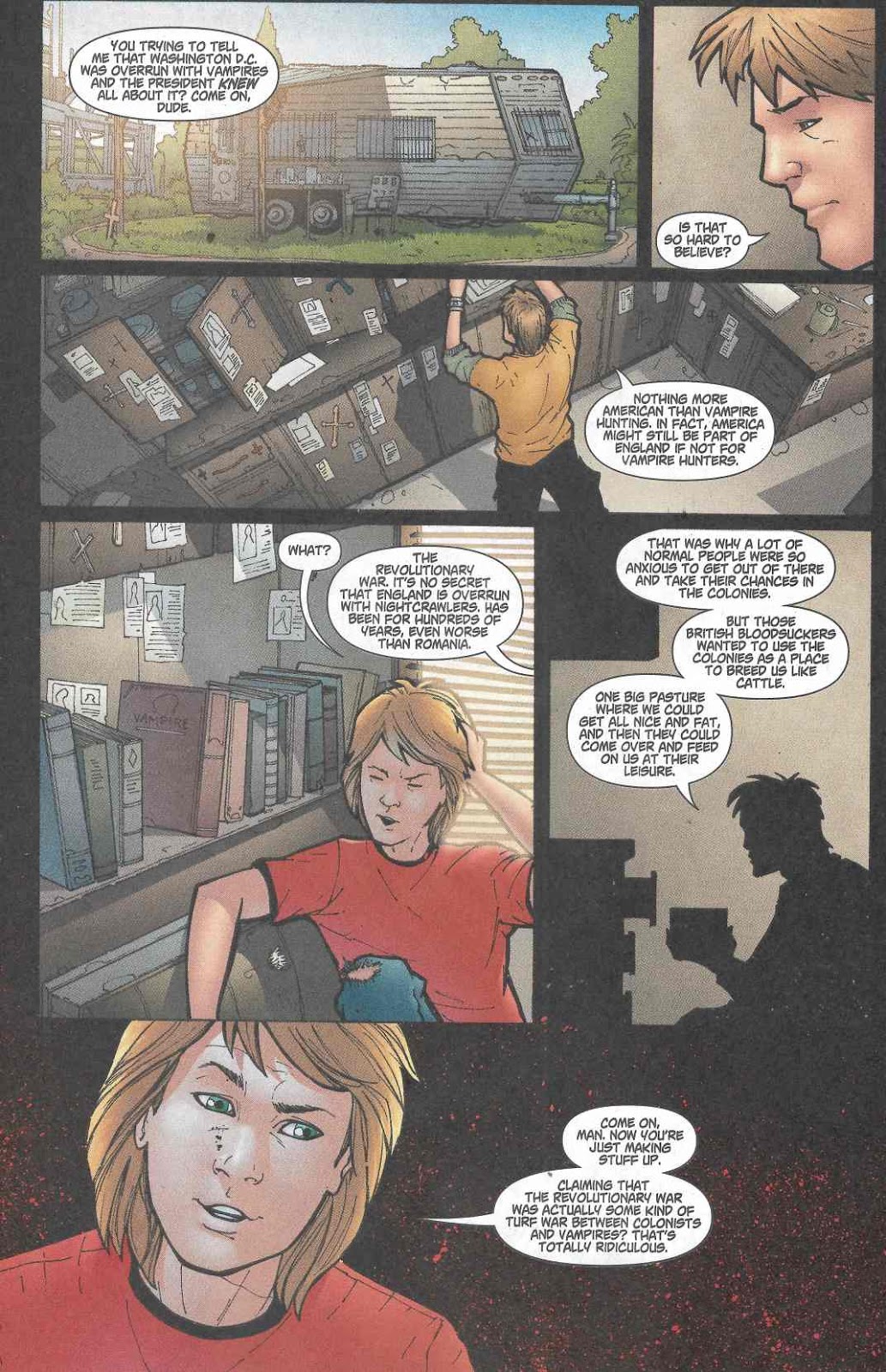 Likewise, this cock-and-bull story that Edgar peppers the kid with. Now make up your mind Edgar: do you want the kid to stay away from vampire hunting or do you want to tempt him into doing it? Doesn’t appear you are being written in a consistent manner. Either be haunted by your past supernatural experiences or revel in them, but you gotta pick a side, man! 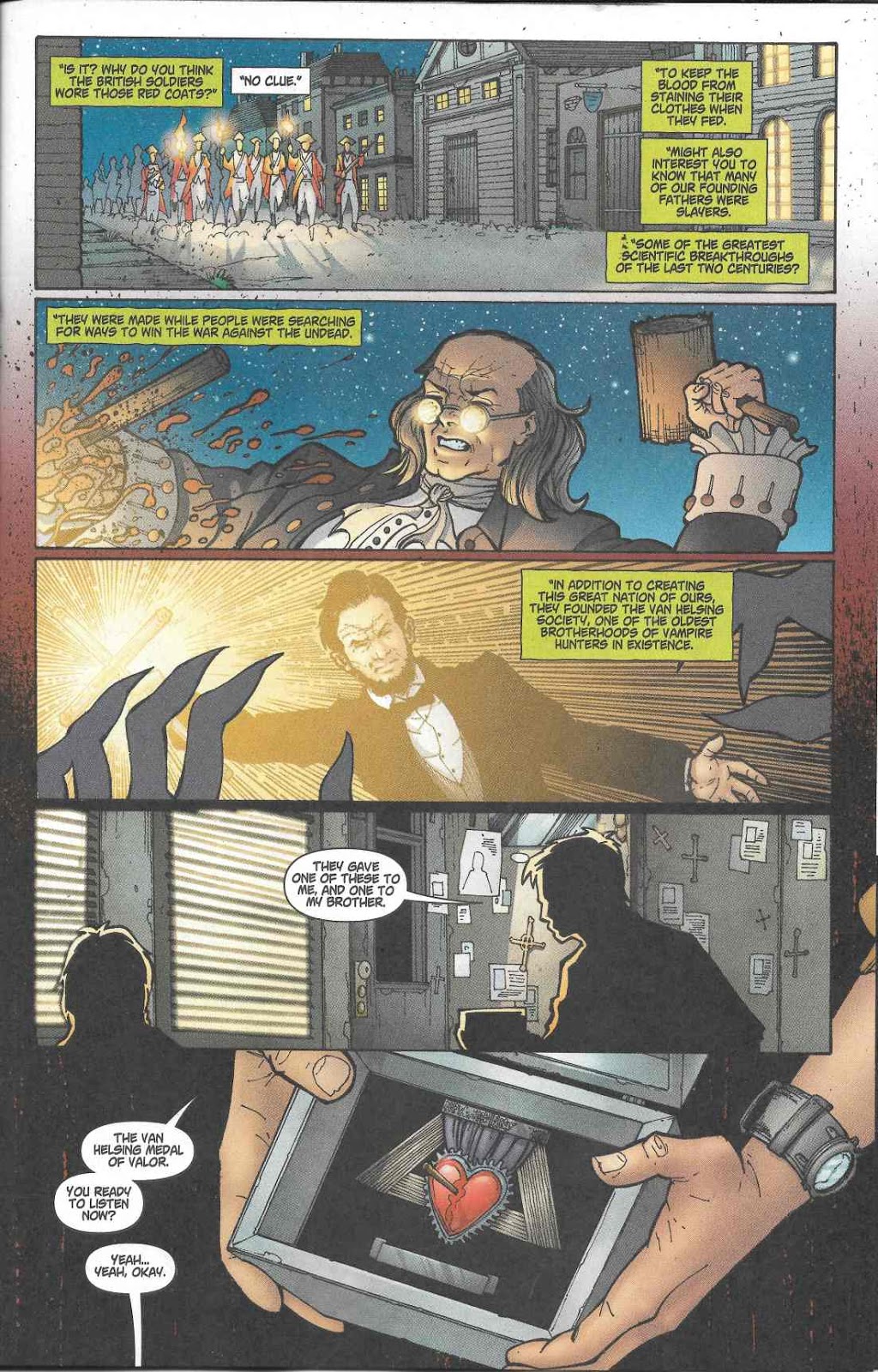 And here again, we go into a weird flashback thing that means the entire Lost Boys universe was WAAAAAY stranger than the first movie made out. In truth, this “more vampires is better” approach doesn’t work for me. The tone of the movie was everyone was too hip for the room, but hey the hippest cats ended up being vampires. The tone of this is Edgar knows the secret history of the USA which is rife with tons and tons of vampires and we’ve thrown out all the hip pop culture feels.

The tone shift is killing it.

As is the disjointed narrative. Now we go to random scene in 1990 where Edgar talks with mom on the phone. She warns him of “bloodsuckers” in Washington D.C. Someone (his brother?) buys her a Washington Monument desk ornament that’s made of wood. See, it’s like a small stake! Bet we see that used in a future issue. 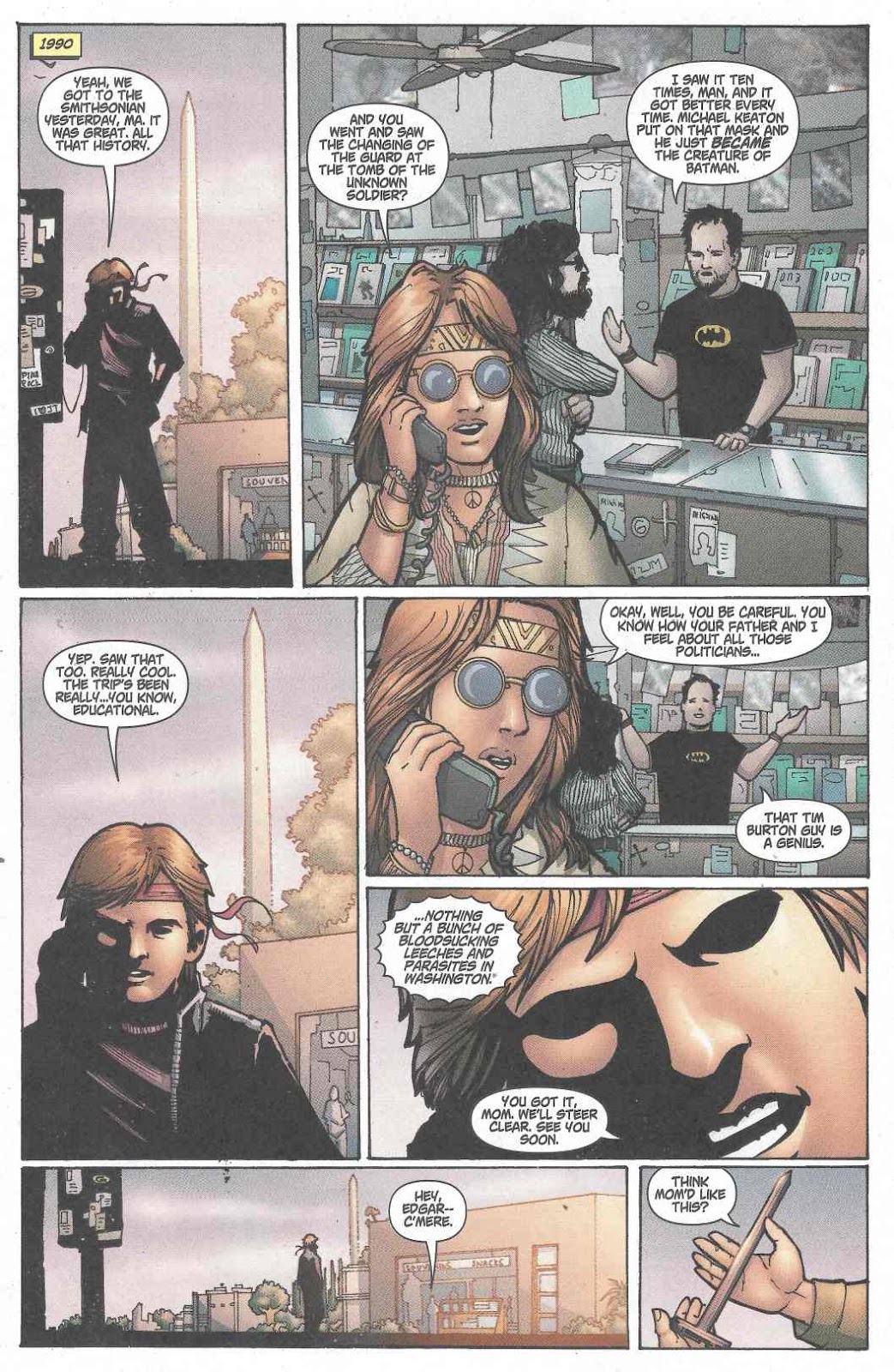 Next is a cab ride from a motel (still in the past? Still in DC? *shoulder shrug* Your guess is as good as mine.) 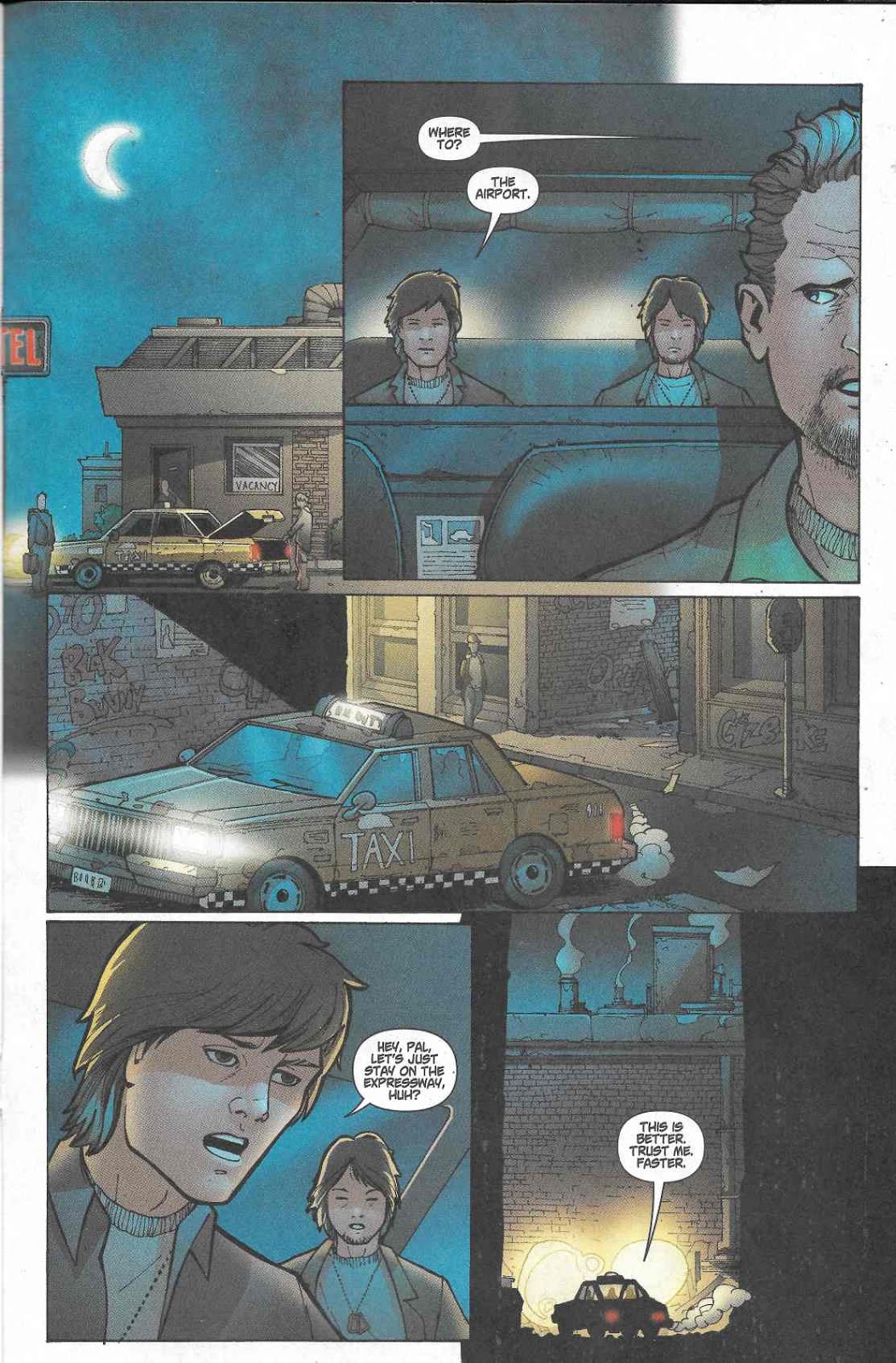 Surprise! Cab driver is a vampire. 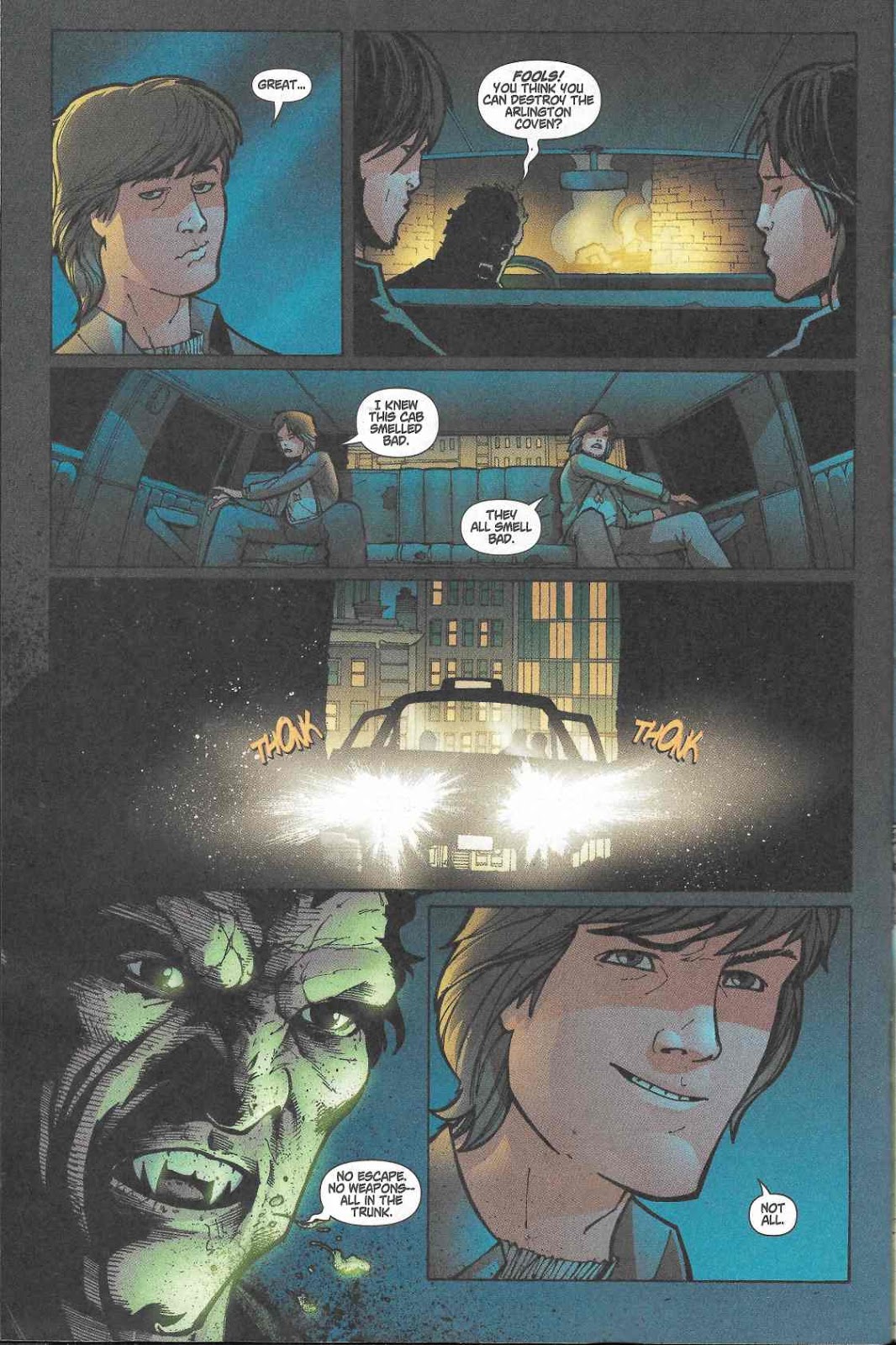 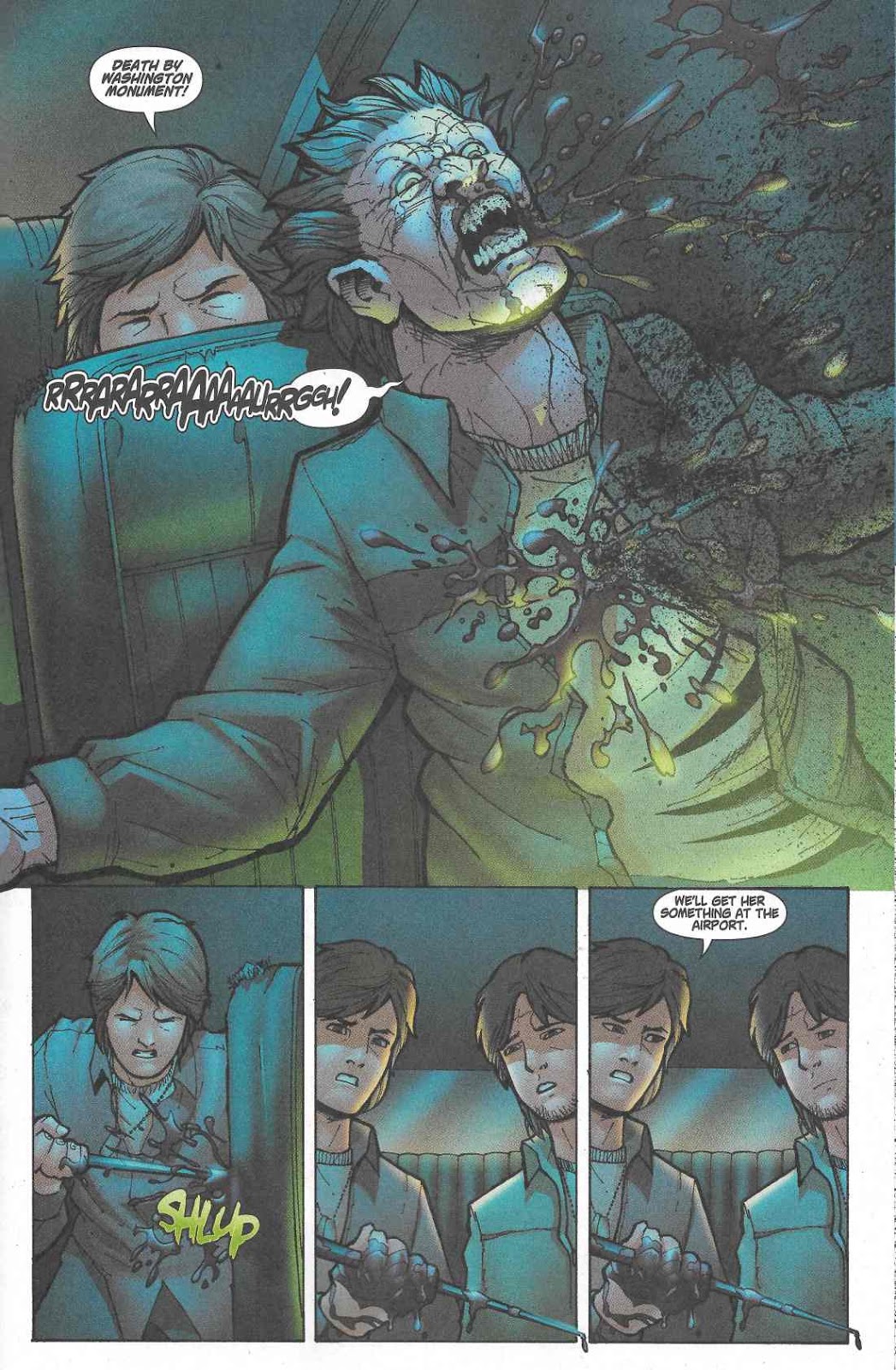 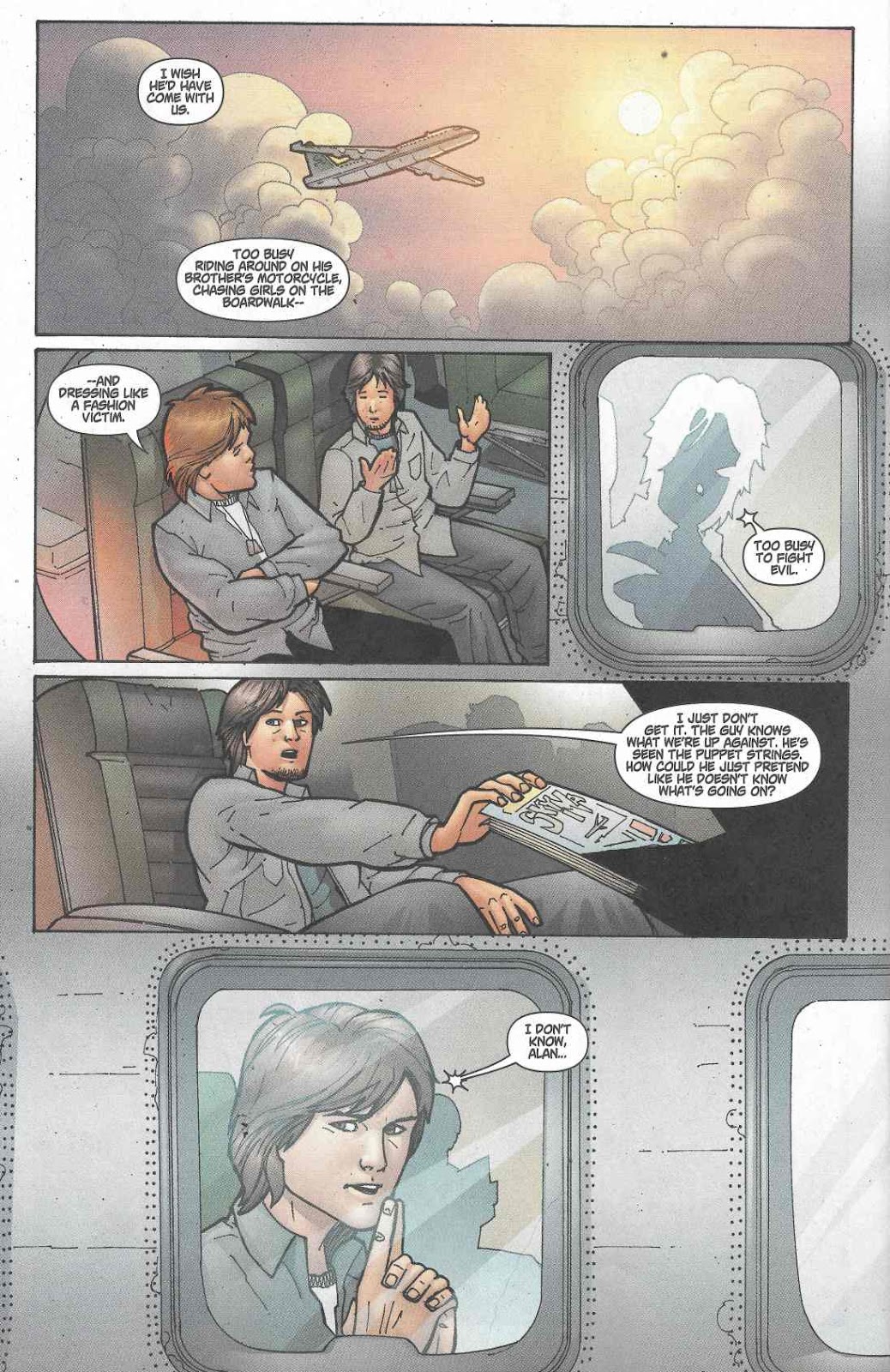 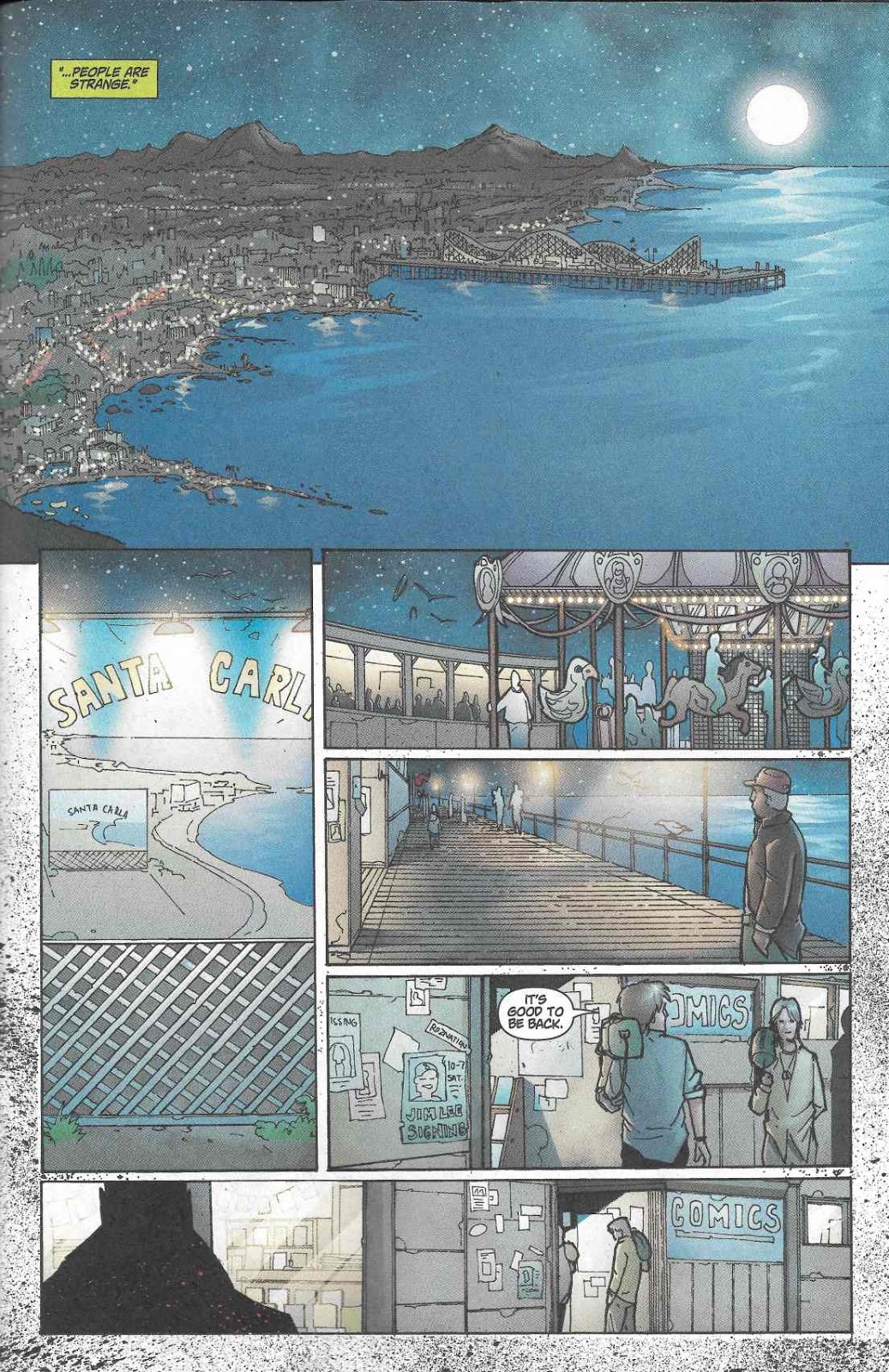 …to the final end stroke of seeing a vampire that is SUPPOSED to be Kiefer Sutherland’s character (he got impaled on antlers, not wood, remember?) 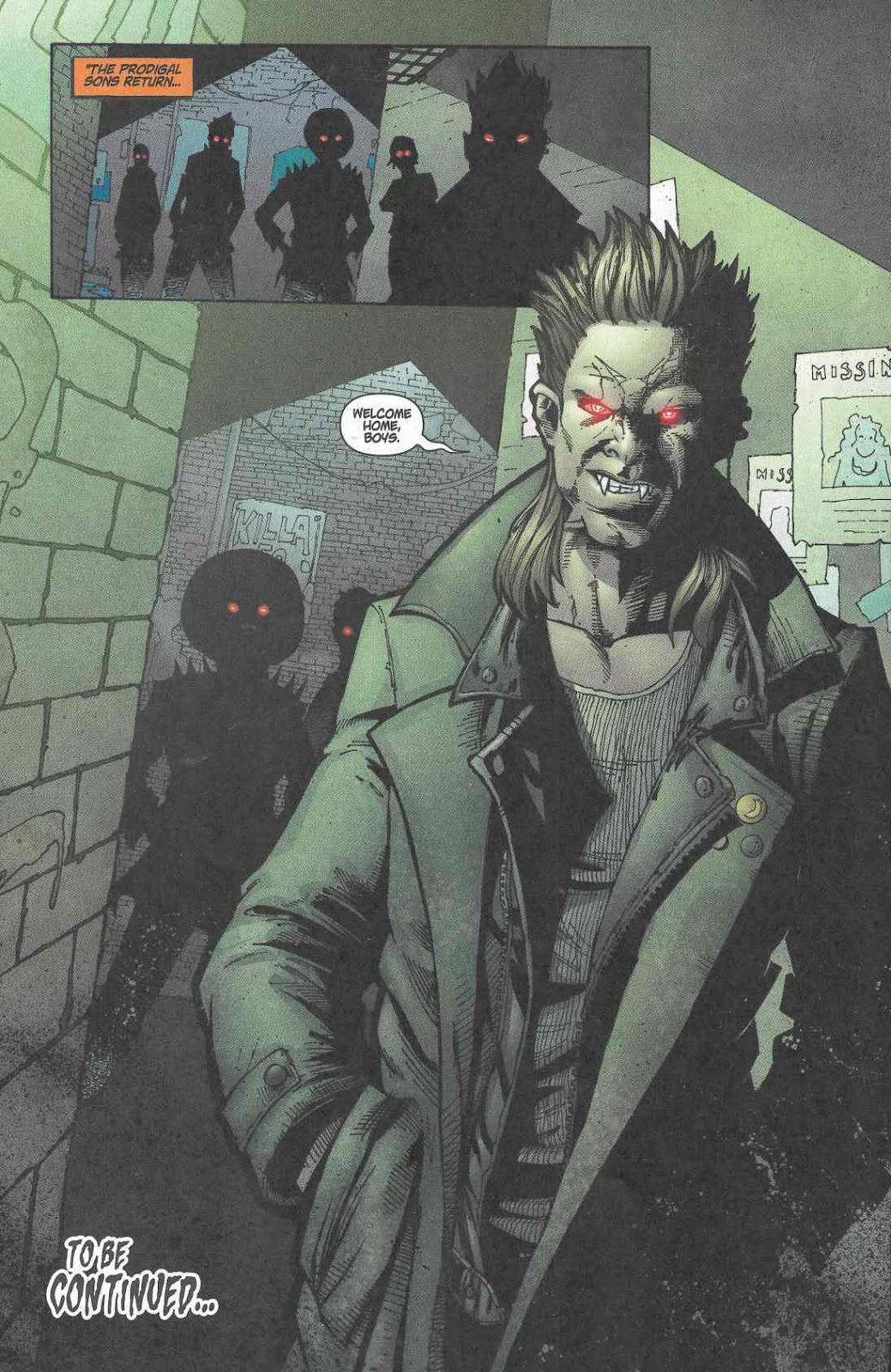 In all, the book doesn’t succeed with me. The first movie worked as a quirky Goonies meets MTV meets Dracula comedy-horror. Every follow-up since rings a bit hollow. As I said, the formula for this to work again would take a miracle to complete.

And miracles ain't that common.
Posted by SonOfCthulhu at 7:58 PM